Photojournalist
www.meghanasastry.visura.co
Aftermath of Coorg floods
Follow Hire
Profile
Stories (31)
Location: Bangalore, India
Nationality: Indian
Biography: Meghana Sastry is a photojournalist from Bangalore, the silicon valley of India . She holds a Post Graduate Diploma in Mass Communication. With a passion for storytelling,  she is a well known for her tenacity and photo stories coupled with... read on
Focus: Photographer, Photojournalist, Journalist, Writer, Multimedia, News, Journalist Investigative
Covering: Asia, Latin America,
Skills: Adobe Photoshop, Photojournalism
Coorg — Rehabilitation Post the Floods
In the year 2018 southern India faced a lot of rains, parts of them were flooded. The northern part of the Coorg district in the state of Karnataka faced the wrath of nature, the taluks being Somwarpet and Madikeri.

The locals say that it started raining on the 14th of March and they hadn’t seen the sun for over a hundred days. August is when the intensity of the rains increased and the calamities started. People feared of being trapped in their homes or being washed away which led to them fleeing their homes to seek shelter in what they believed to be safer places. A lot of them returned later to find their homes washed away and some have come back to find massive cracks and continue living there with the hope that they won’t collapse if the rains continue as they have nowhere else to go. A lot of others lost their entire plantation or parts of it and are now trying to build them back.

Having said this, people came together to help one another. Those whose homes were intact provided shelter, food and relief material to the rest, and they said help poured in from outside Coorg as well; people sent in all kind of relief material. Rehabilitation centers were built by the government to provide temporary accommodation with food.

The Somwarpet to Madikeri road had just opened for commuters but was still avoided during rains as it was still being rebuilt as it had suffered a lot of landslides. Mobile towers were slowly being reinstalled. There was still a long way to go as homes and estates were going to take months or even years to be re-build. While Somwarpet had seen the maximum loss, Chamundeshwari Nagar and Indiranagar in Madikeri had also witnessed nature’s fury. Roads were being reconstructed using M-Sand which were as hard as rocks, filled in sacks and stacked up until they reached the top. The water level from the river had reached the point from where images have been taken and the roads had collapsed. Since the road had just opened up, people are driving by to check the extent of damage. 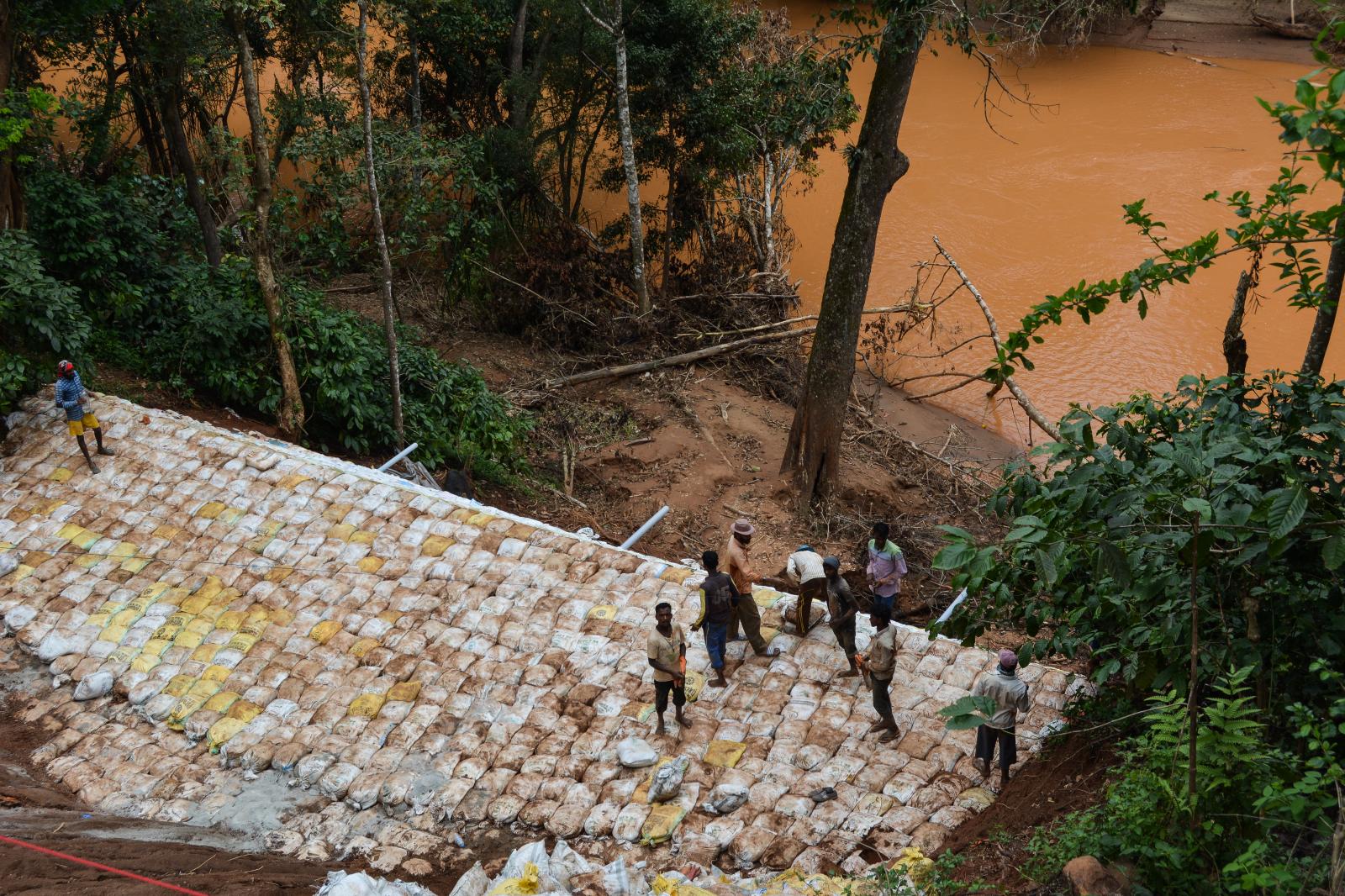 2 of 14 © 2021 Meghana Sastry
The water levels had risen to the road from where the image is being taken due to this increase in water levels, a lot of roads collapsed. 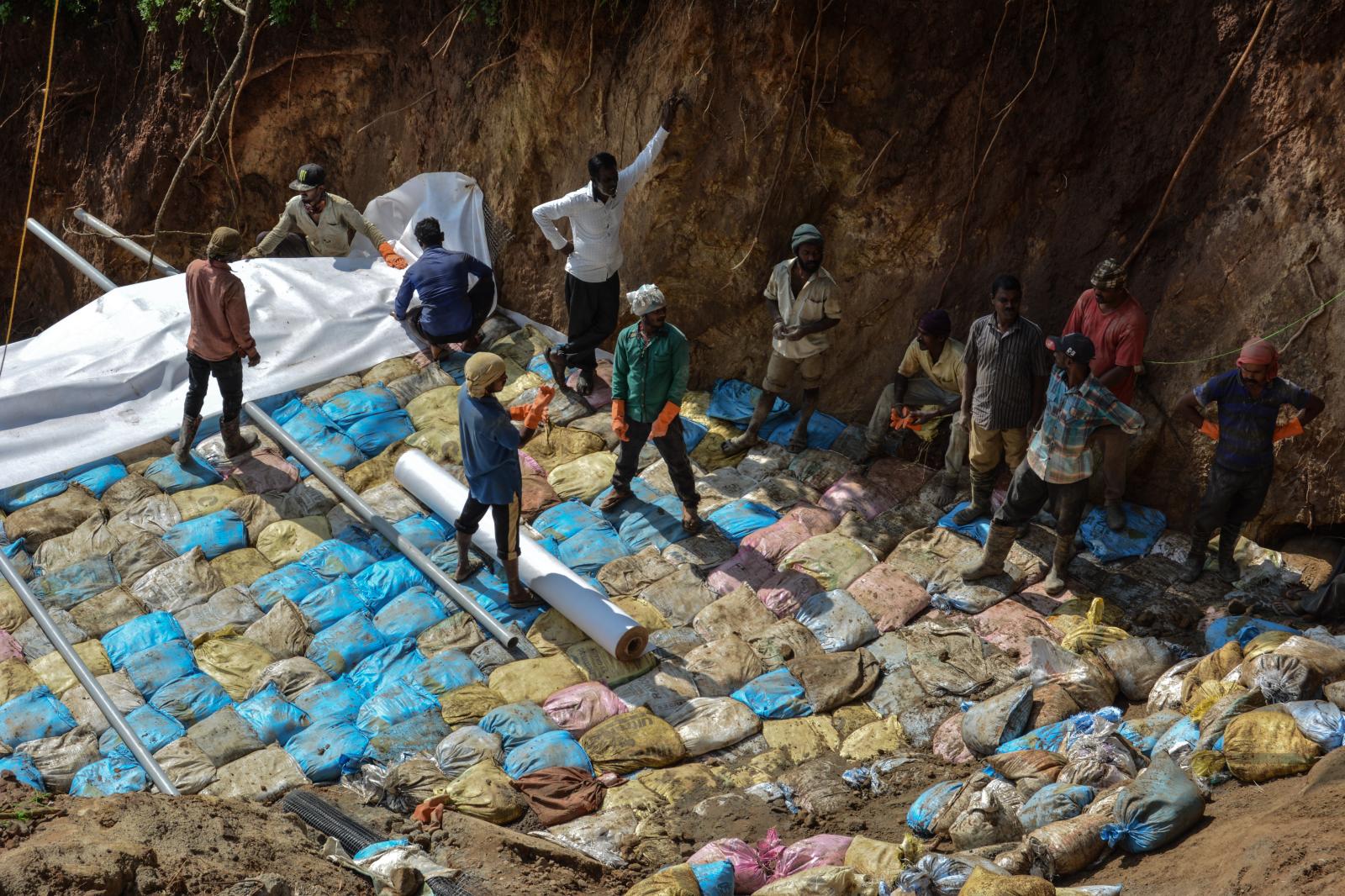 3 of 14 © 2021 Meghana Sastry
These roads are now being re-built by using M-Sand which is loaded in sacks an then stacked up. These are as hard as rock. 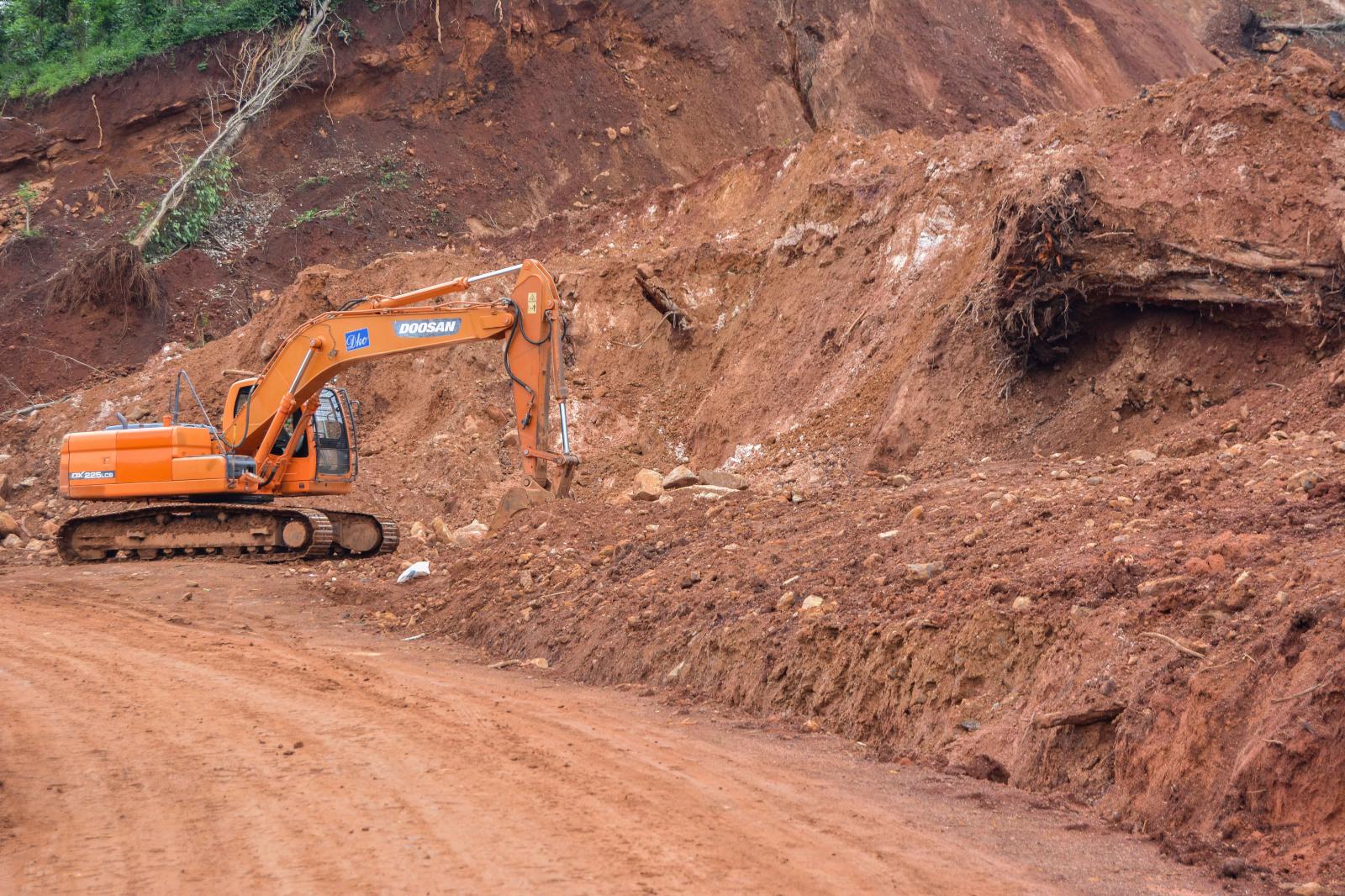 4 of 14 © 2021 Meghana Sastry
While road work has begun, cranes are being used to continue clearing landslides in other parts of the Somwarpet-Madikeri road. 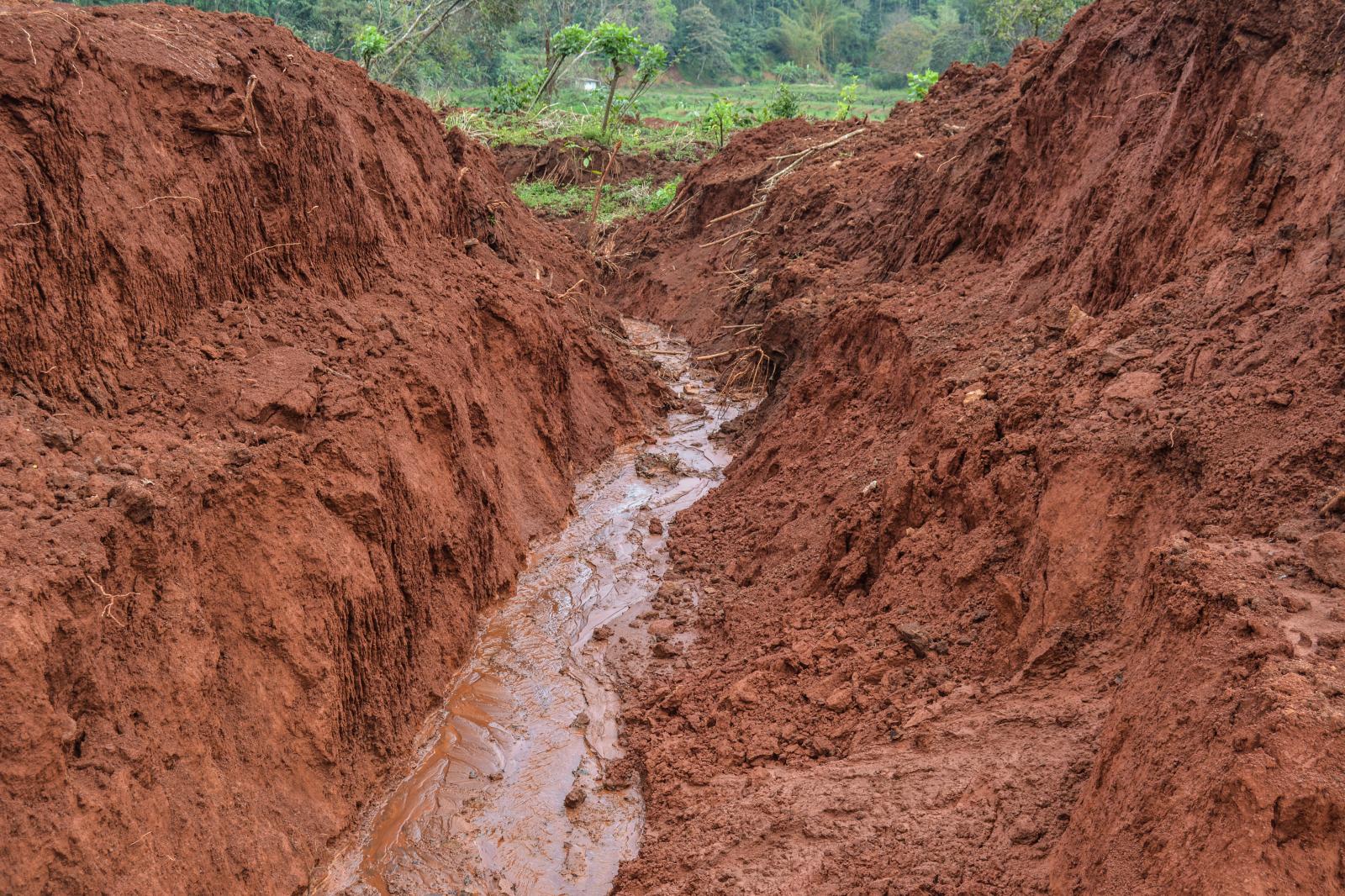 5 of 14 © 2021 Meghana Sastry
A lot of estates have collapsed cutting off access to the villages some can be connected by foot if they tread carefully. 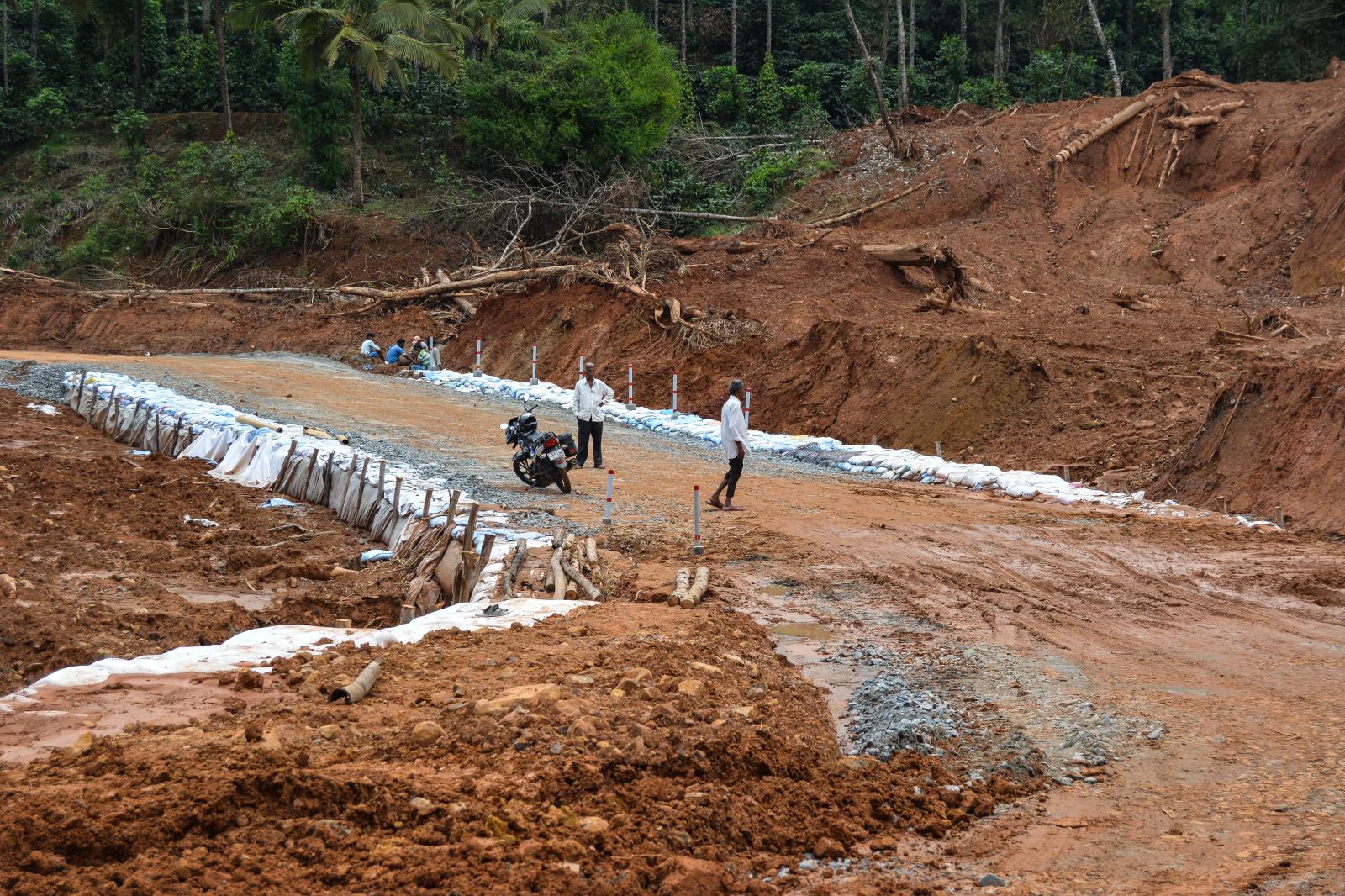 6 of 14 © 2021 Meghana Sastry
People from both the taluks are driving on the Somwarpet - Madikeri road which has opened up recently to check out the extent of loss and stand there in disbelief. 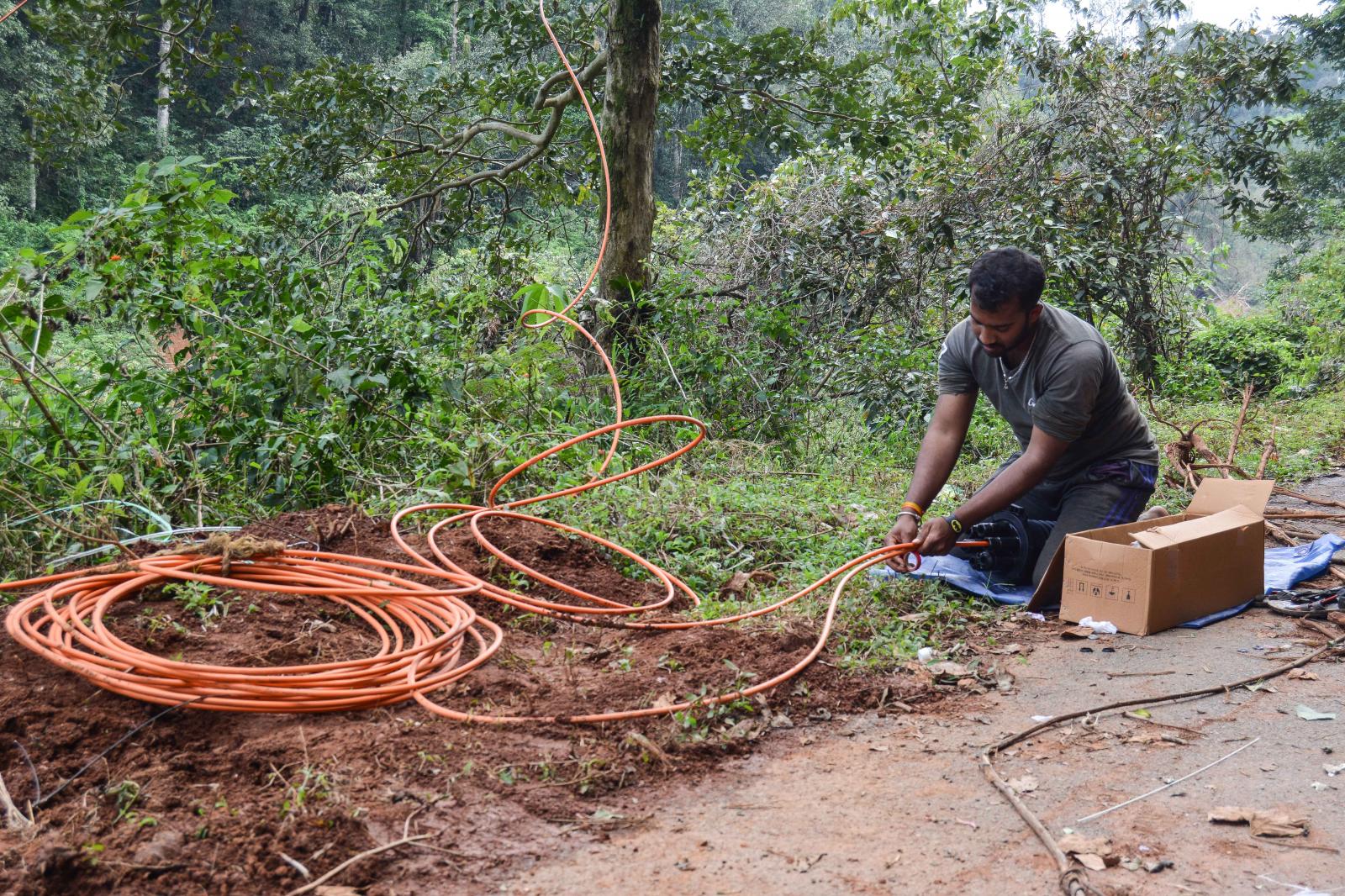 7 of 14 © 2021 Meghana Sastry
While people are constructing roads, there are also mobile service providers rebuilding connections. In the image above a man who works with Jio is seen fixing a line. 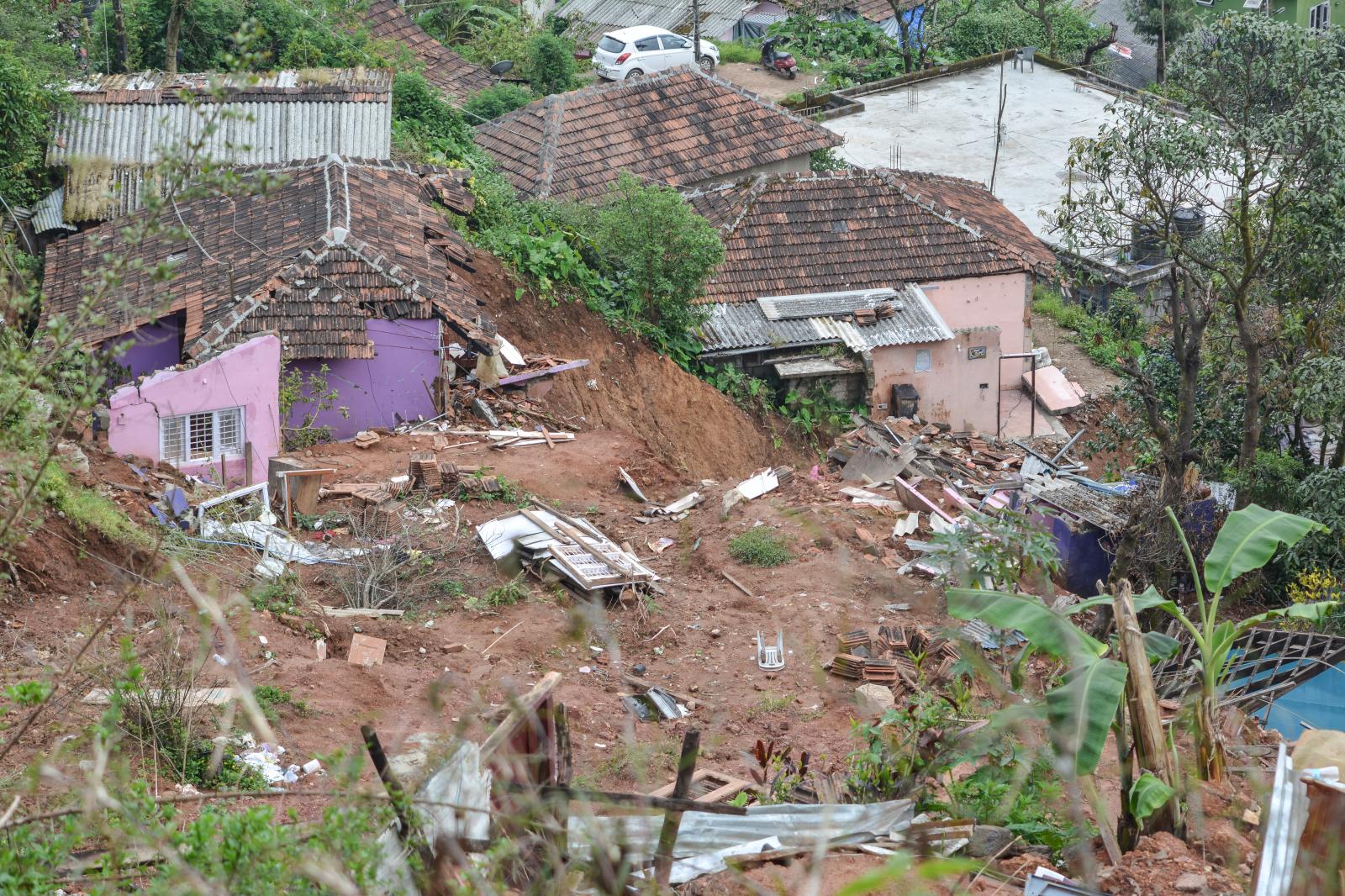 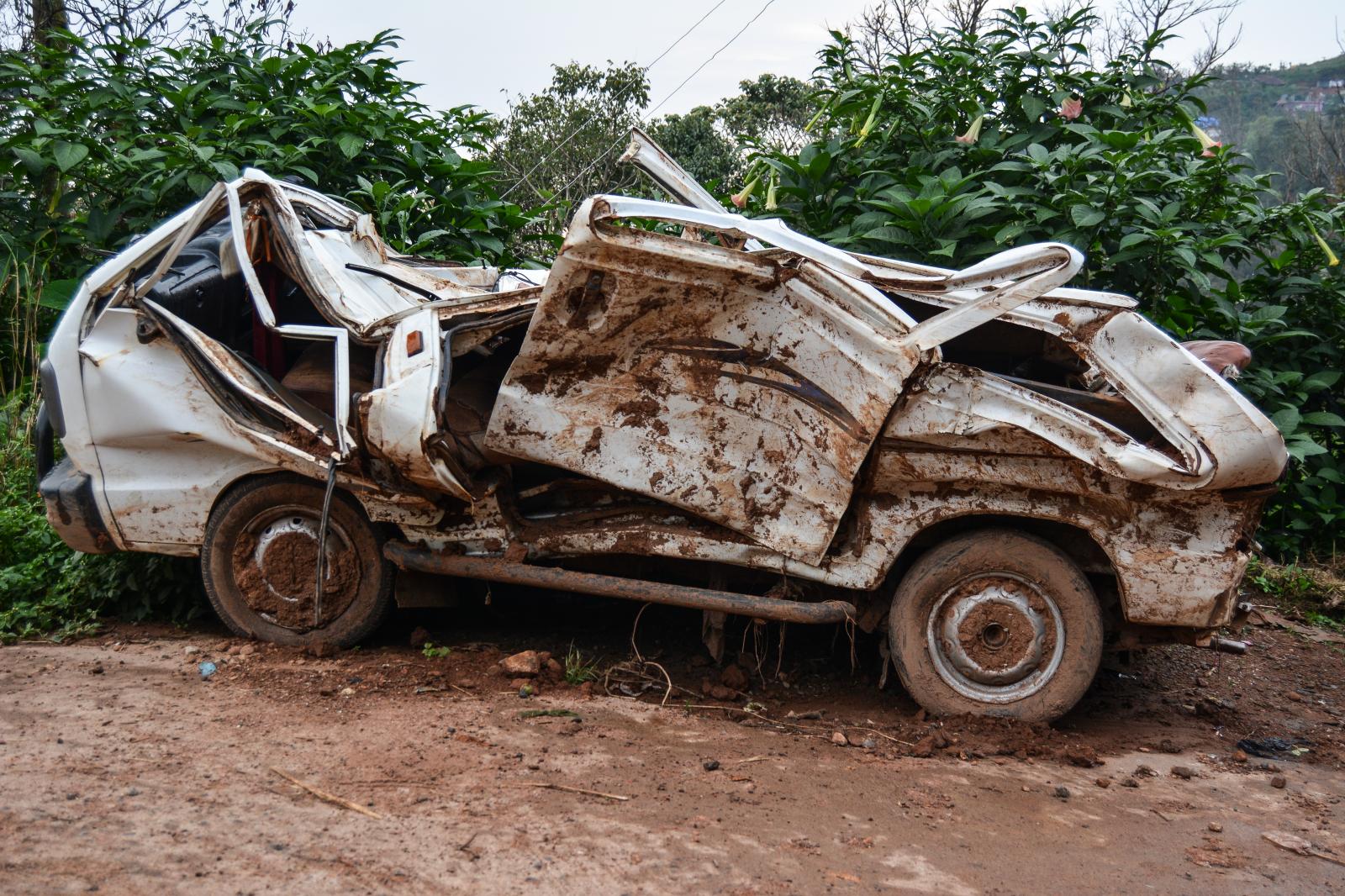 9 of 14 © 2021 Meghana Sastry
Indiranagar in Madikeri haven’t been visited by people say the residents who have faced a lot of loss. This car was dragged out of the garage and smashed by the rains and 2 other scooters are buried somewhere inside, that haven’t been found. 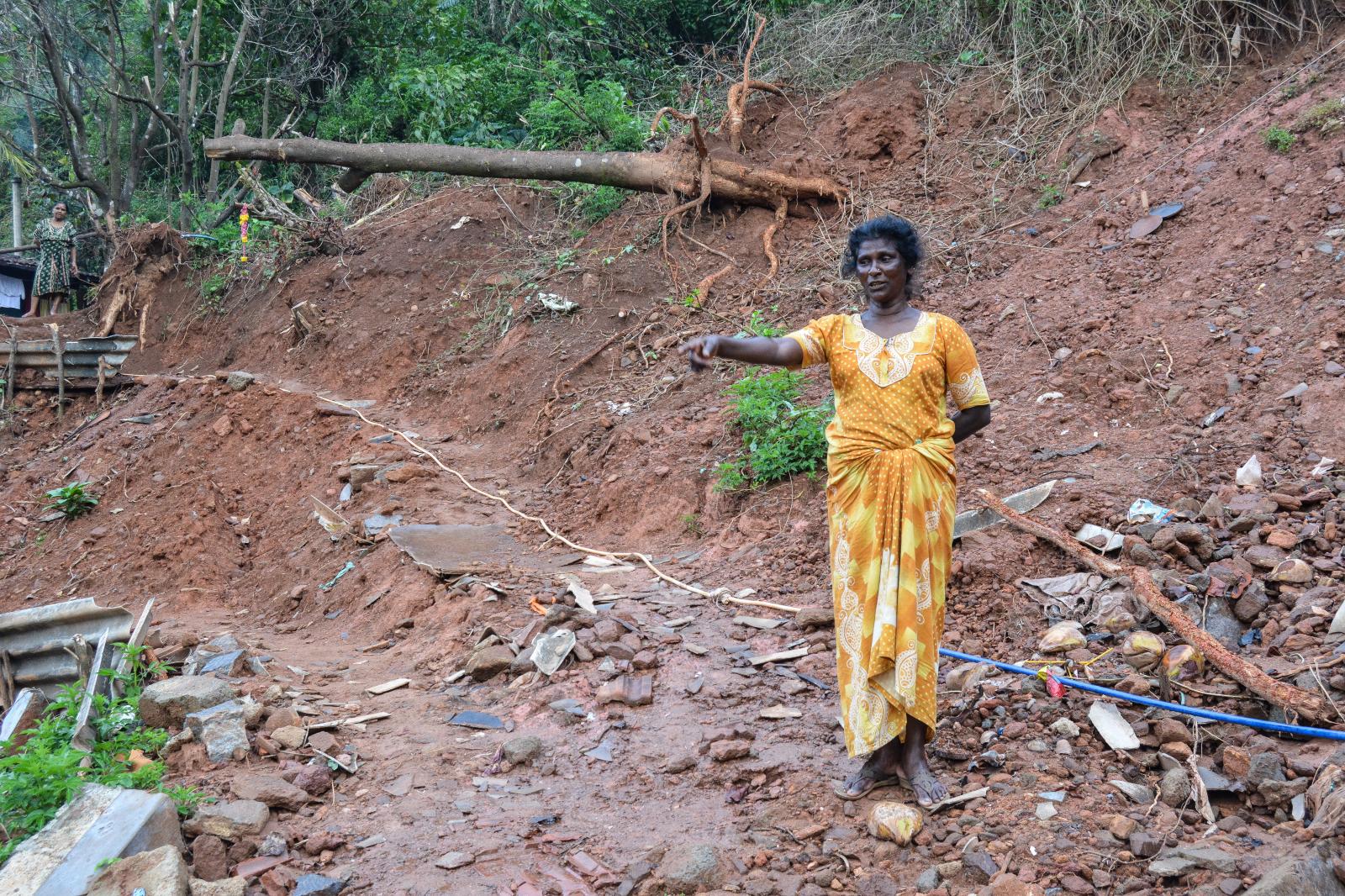 10 of 14 © 2021 Meghana Sastry
This is Kaveri aged 48 who has lost her house and staying with friends pointing out to where the scooters are buried. 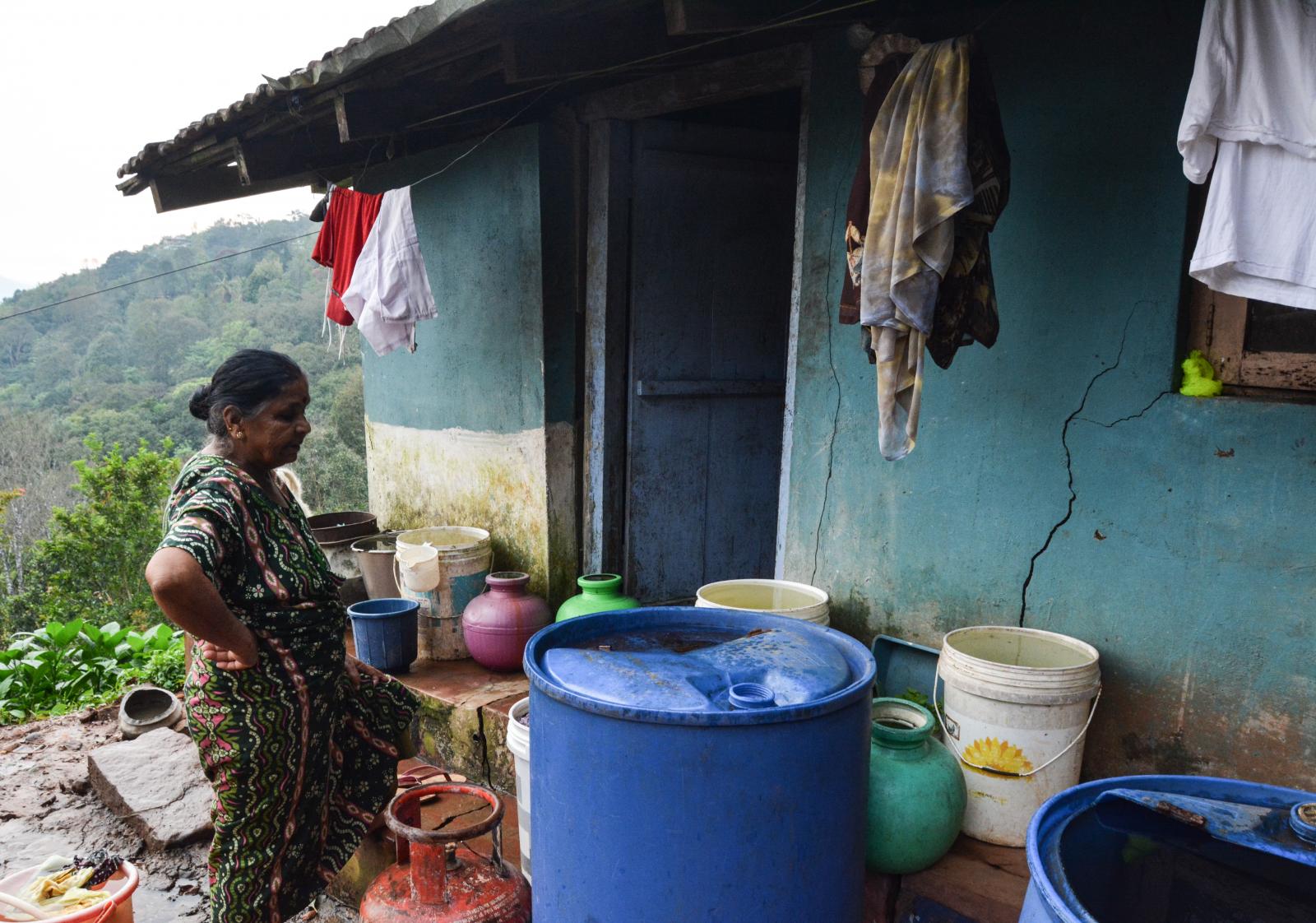 11 of 14 © 2021 Meghana Sastry
This is Thayamma aged 63 who stands in front of her house in the first image telling us that the roads were washed away but somehow the houses withstood the rains but have a lot of cracks in them. They hope for no further damage. They built a temporary pathway to their house on their own. 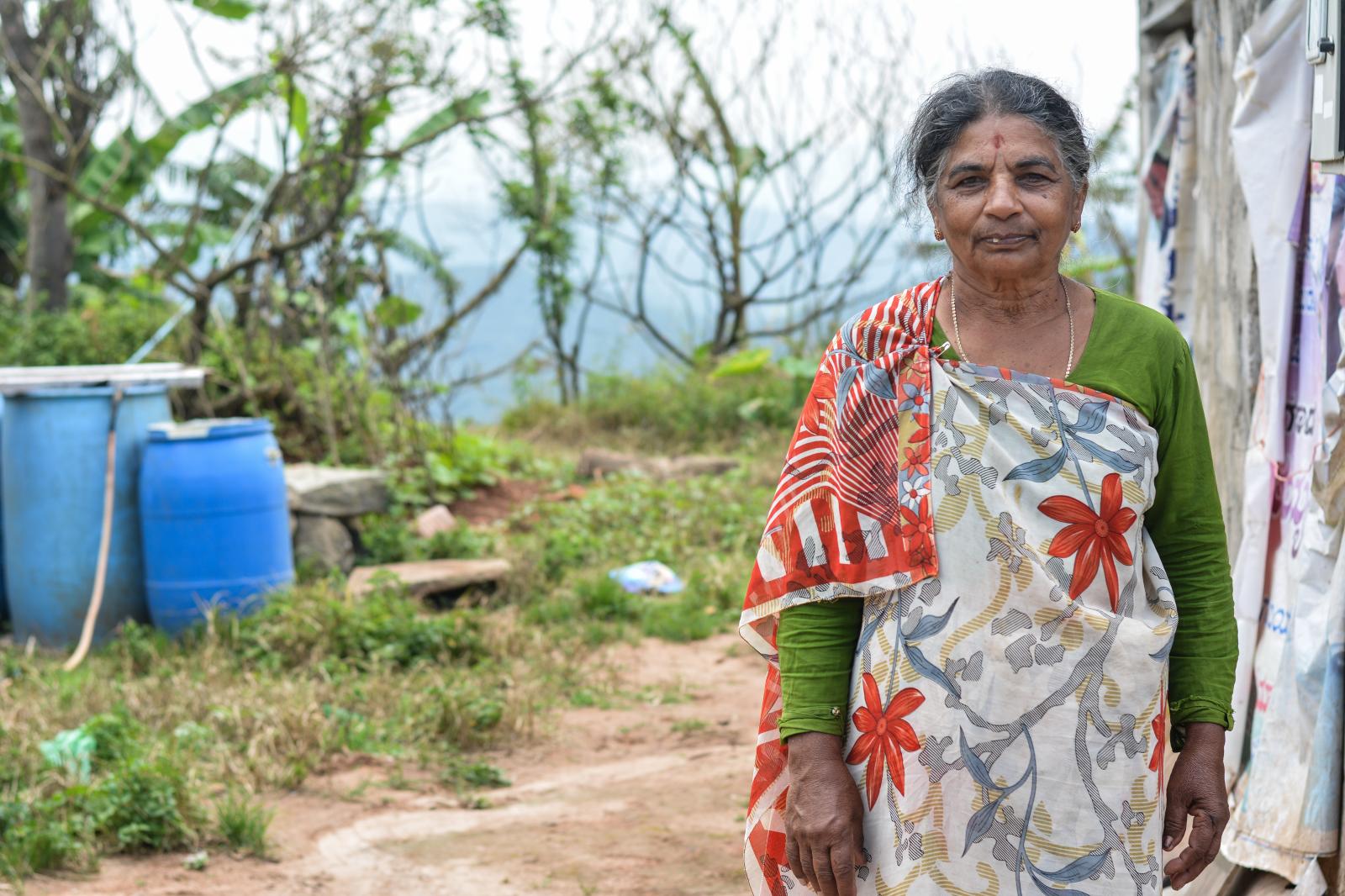 12 of 14 © 2021 Meghana Sastry
Muttavva who describes the night the houses collapsed right under her nose. 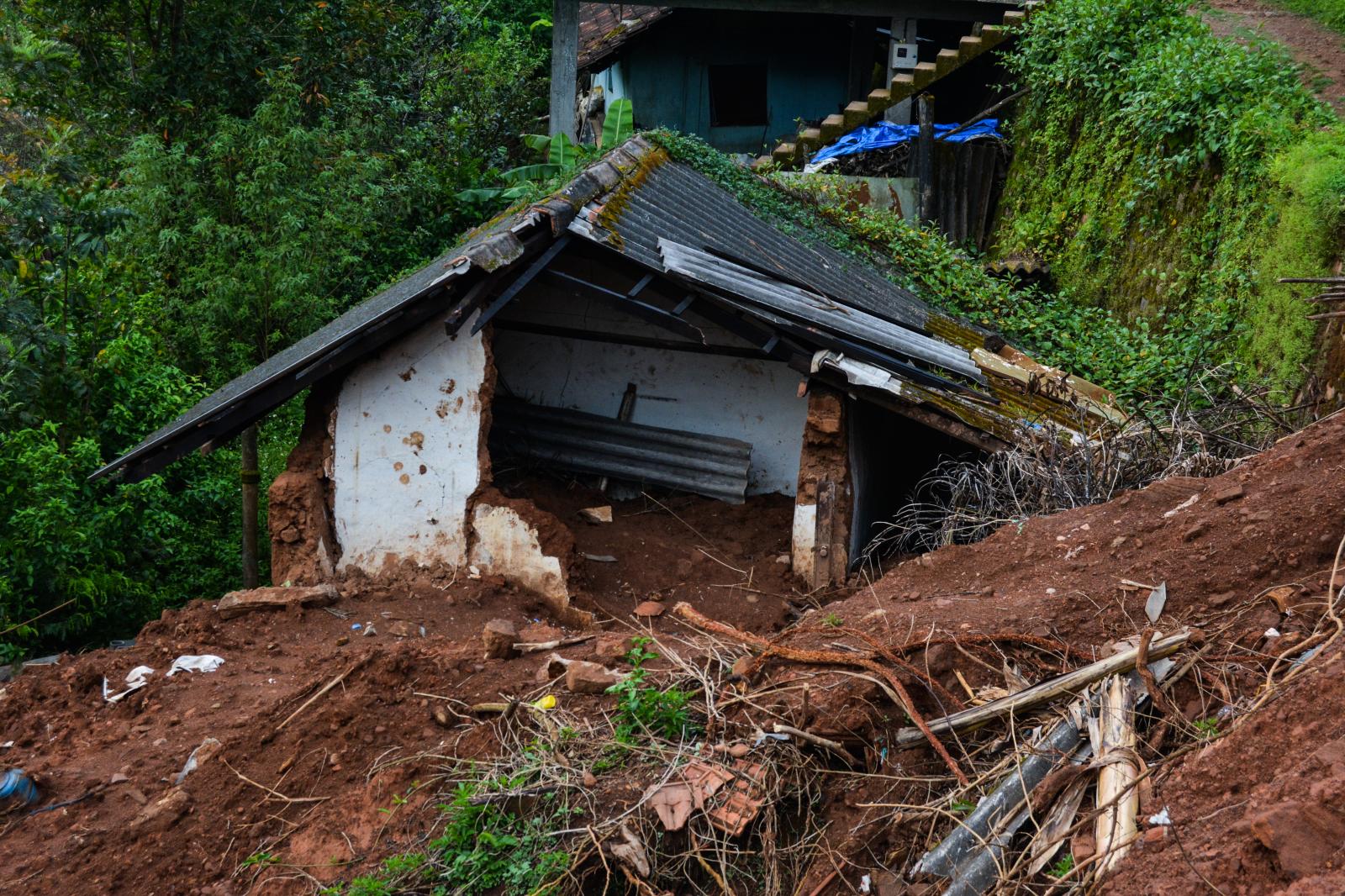 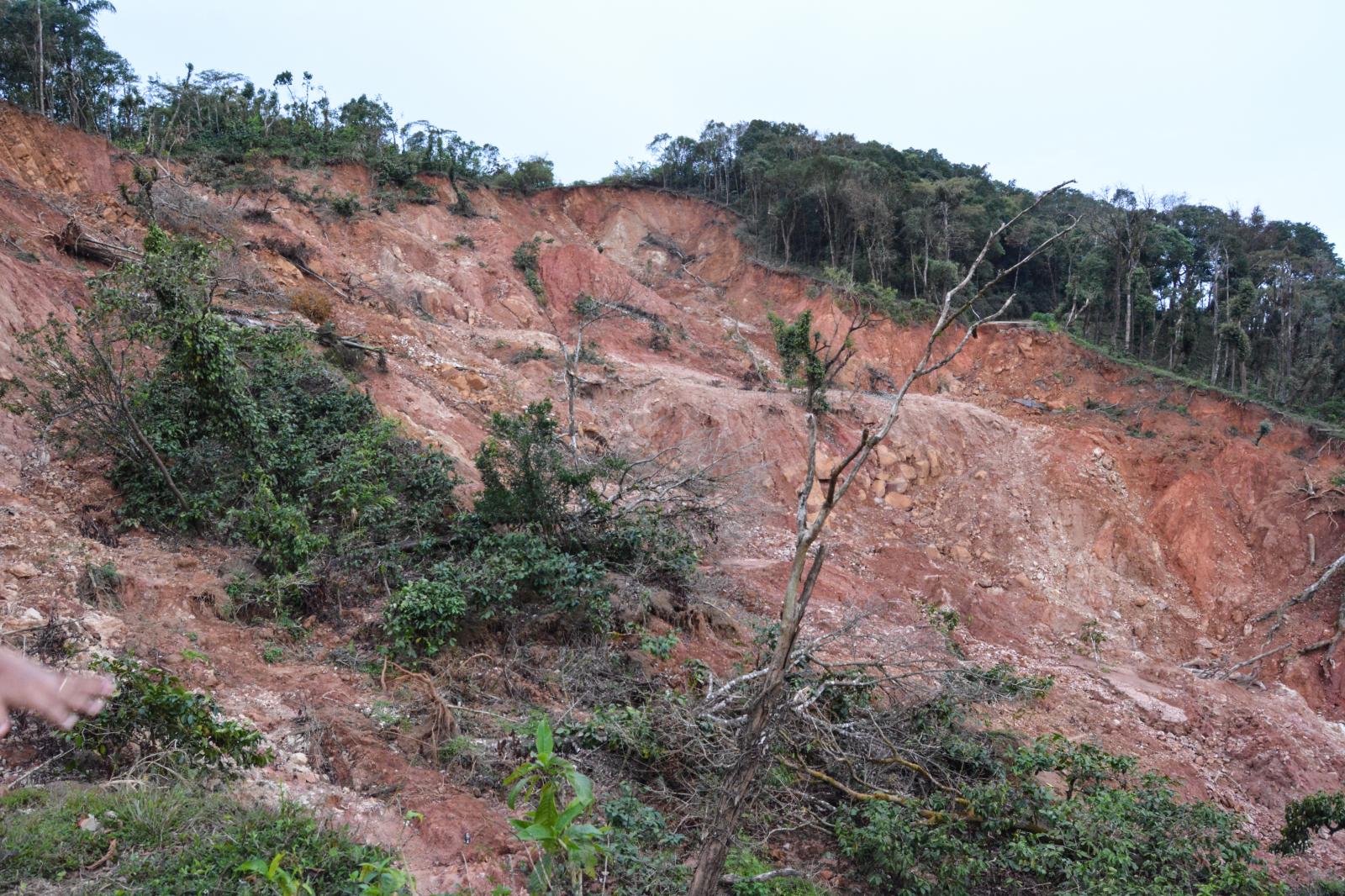 14 of 14 © 2021 Meghana Sastry
A lot of estates have collapsed cutting off access to the villages some can be connected by foot if they tread carefully. The two images on top are that of Patla estate which has seen a massive loss of about 16 acres. A road that goes by the estate connects Coorg to Sakleshpur. A make shift pathway has been created to restore connectivity.
Public Story
Aftermath of Coorg floods
Credits: meghana sastry
Updated: 06/17/20
Archived as:  Climate Change, Conservation, Documentary, Editorial, Environment, Homelessness, Loss, Media, Photography, Photojournalism, Poverty, Reporting, Sorrow