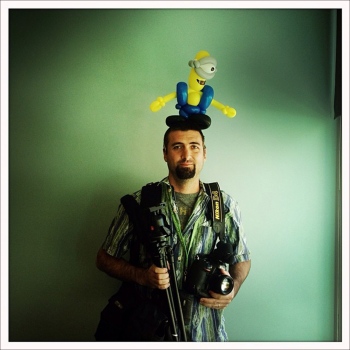 RJ Sangosti is an award-winning freelance photographer based in Denver, Colorado. In 2013, he was named Photojournalist of the Year in the National Press Photographers Association’s award for large markets. His portfolio included photos of the Aurora theater shooting, which is a story that won The Denver Post the 2013 Pulitzer Prize for breaking news. In 2012, Sangosti was presented the Associated Press Member Showcase Photo of the Year. That same year, Sangosti was picked in Time magazine’s top 10 photos of the year. Recently, he was honored to be part of the jury for the centennial year of The Pulitzer Prizes. His work has been featured in the New York Times, Time magazine, The Guardian, The Washington Post and other publications. Sangosti’s clients range from Excedrin to shooting PTA events at his kids’ school. He enjoys bringing his creativity and passion, for all types of photography, to every job.

When I was young, I struggled to read like the other kids in school. I started carrying around old copies of my father’s National Geographic magazine collection. While my classmates would read their school books, I would lose myself in the photos of the magazine. I was a child battling dyslexia, and I turned to photography as a way to express myself. At that early age, I realized I wanted to be a photographer. I have not looked back since.

I was born and raised in a small town in the Colorado mountains. This is where I fell in love with the outdoors and the people of rural communities. Now I take my passion for photography and enjoy telling stories of daily life in rural America.

Recently, I was named 2013 Photojournalist of the Year in the National Press Photographers Association’s award for large market newspapers. My portfolio included photos of the Aurora theater shooting, which is a story that won The Denver Post the 2013 Pulitzer Prize for breaking news. I have also been honored by winning the 2010 Hillman Prize for Photojournalism for a staff project on childhood poverty, along with several awards from Pictures of the Year International throughout my career.