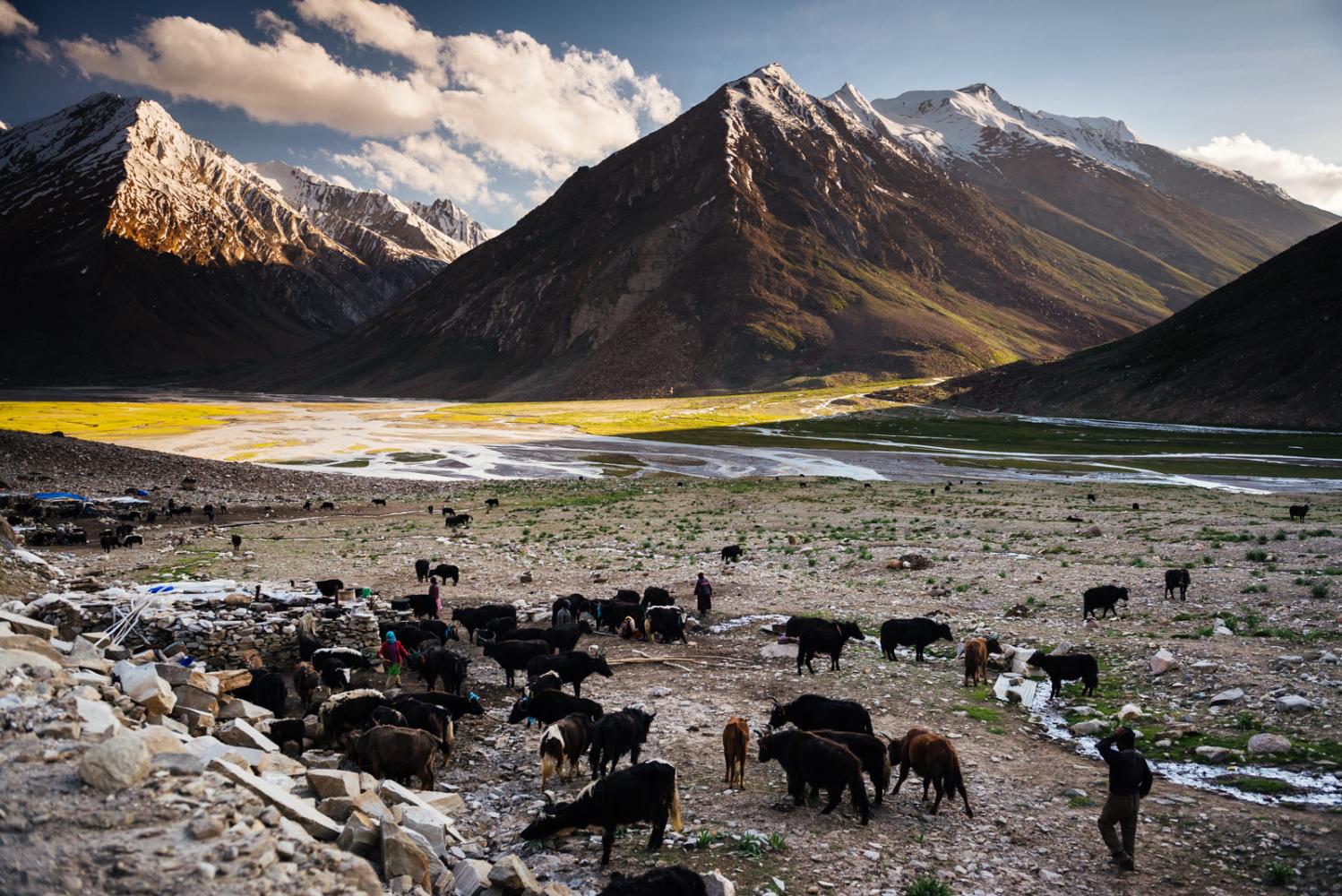 1 of 28 © 2020 Christopher Rubey
The sun sets over the ice capped mountains of the Zanskar Valley as a tzo herder moves his livestock near the Penzi La Pass of Kashmir, India. 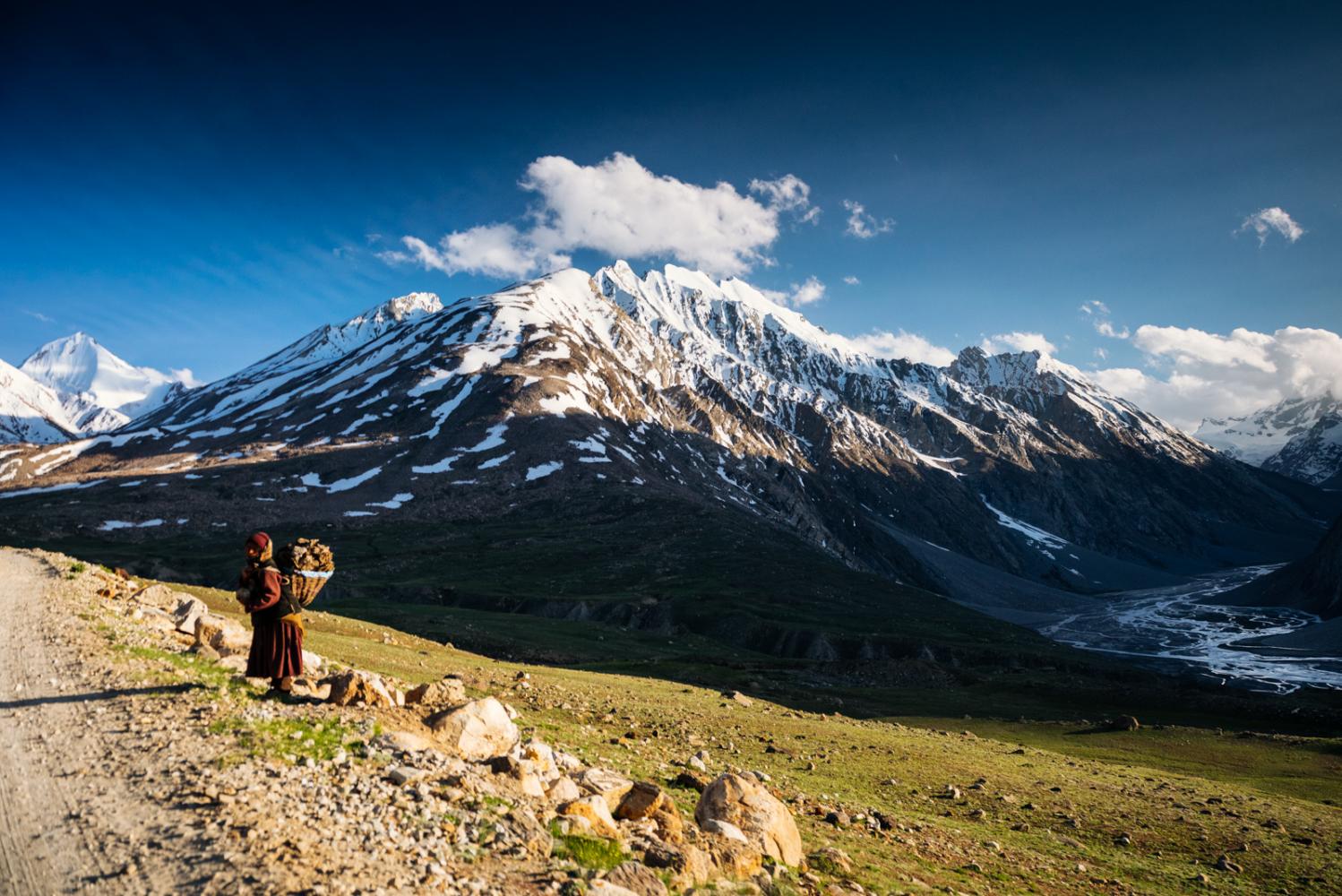 2 of 28 © 2020 Christopher Rubey
The sun sets over the ice capped mountains of the Zanskar Valley as a local Changspa woman collects tzo droppings near the Penzi La Pass of Kashmir, India. Due to the lack of vegetation and trees in the Himalayan and Karakoram regions, yak droppings are the only material available to make fires and heat homes. 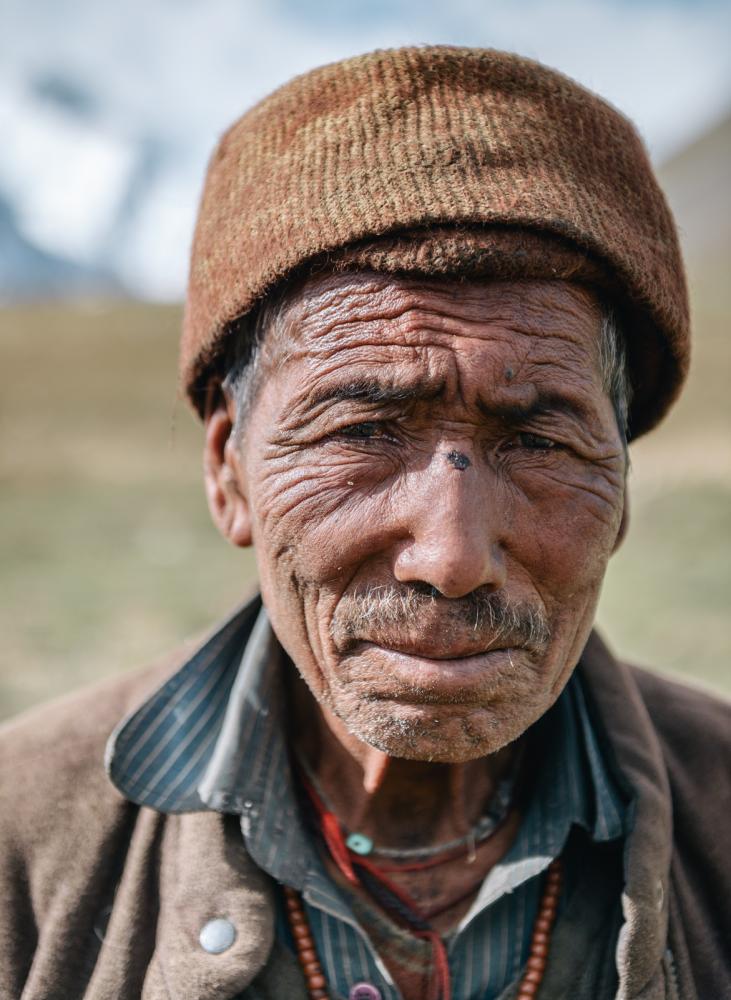 3 of 28 © 2020 Christopher Rubey
Angdu, an elderly Chongspa nomad, a tso and yak herder who lives in the remote Zanskar Valley of Kashmir. He lives by the gigantic Drang-Drung glacier, in a house made of stone, straw, and other organic materials found in the local environment. He burns yak droppings for fires, and lives on a diet of yak related food derivatives. This way of life, or the Chongspas' nomadic way of life is slowly becoming extinct as harsh winters prevent the continuation of their habits. 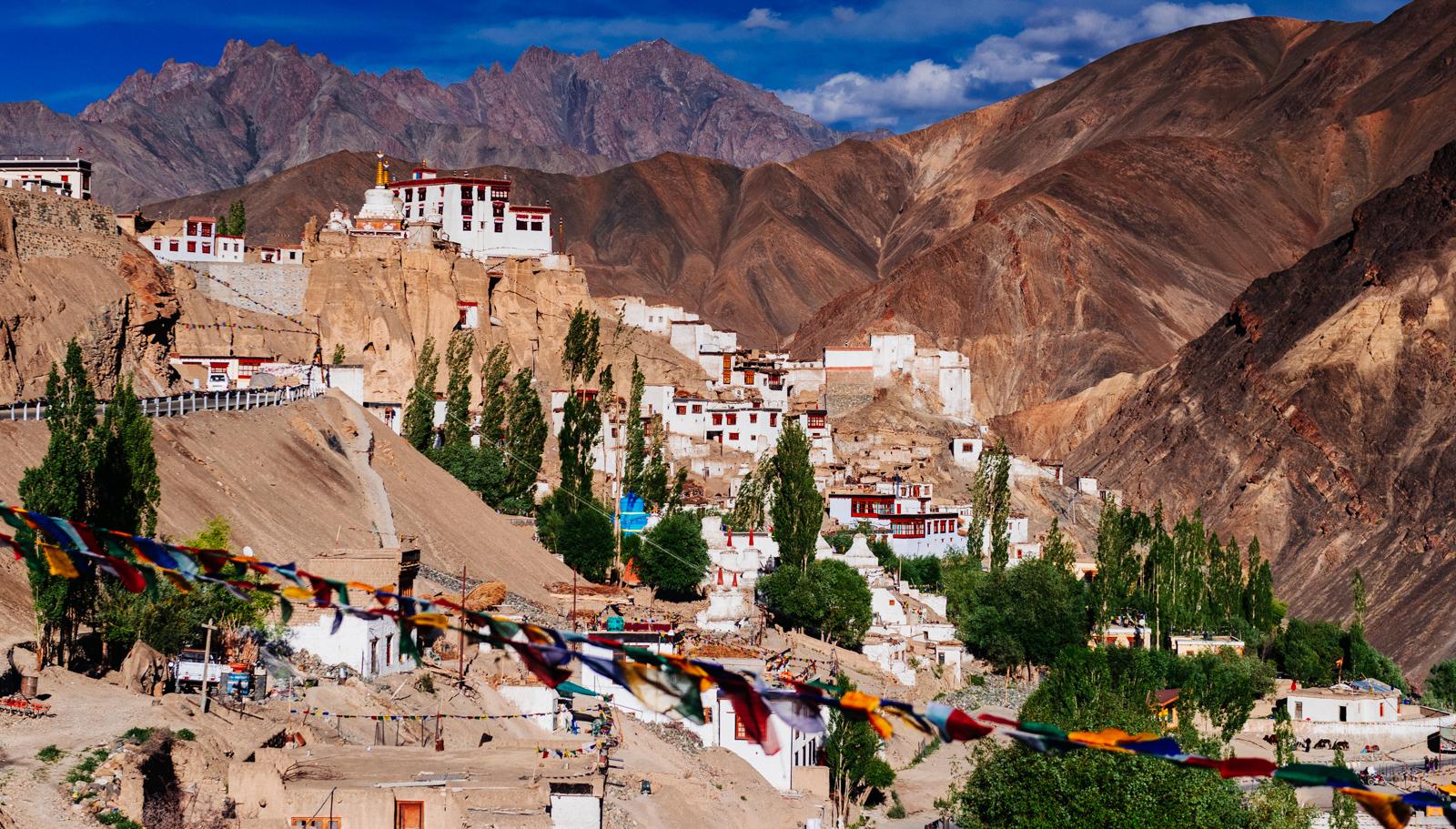 4 of 28 © 2020 Christopher Rubey
Lamayuru monastery seen from the highway in Ladakh, India. 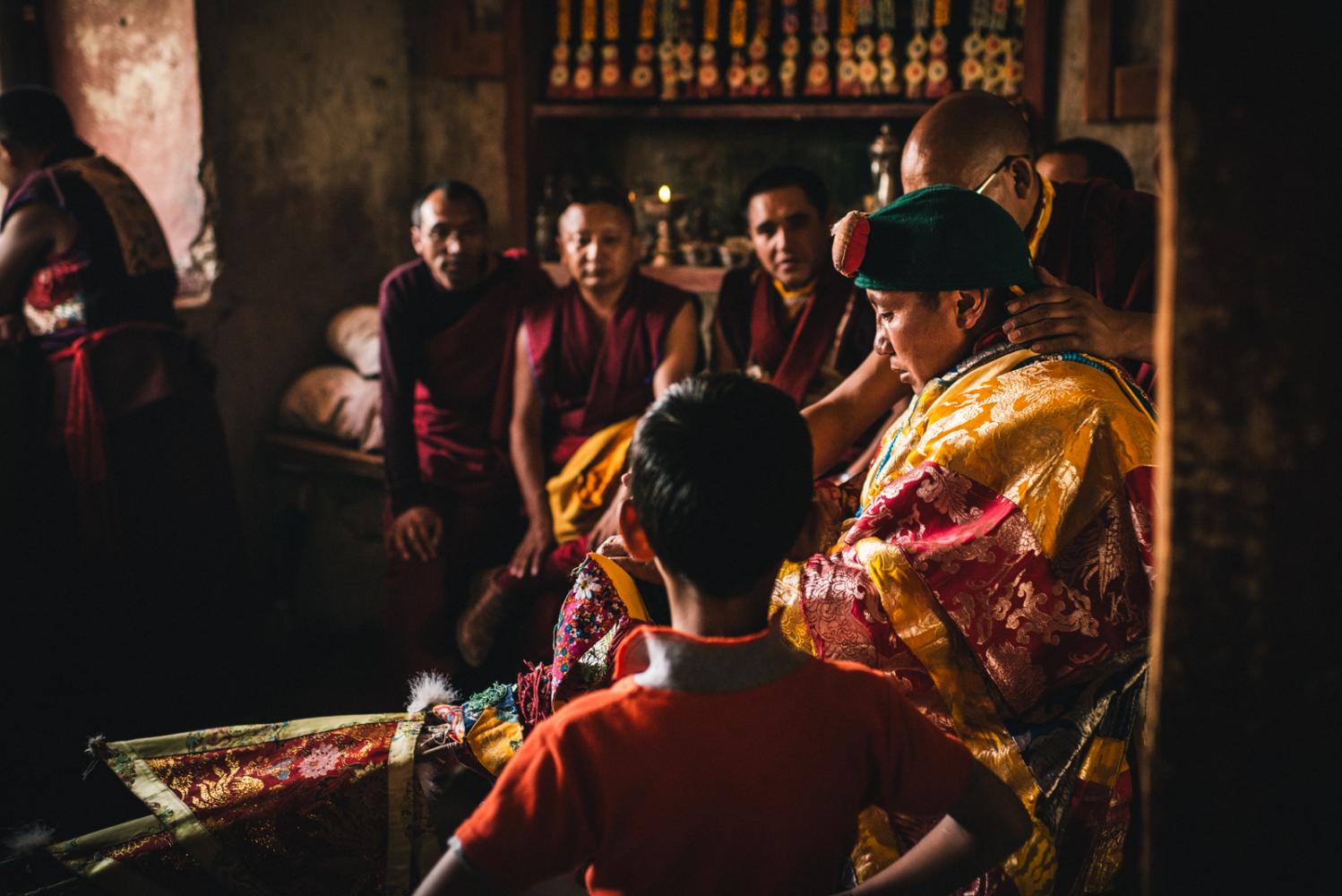 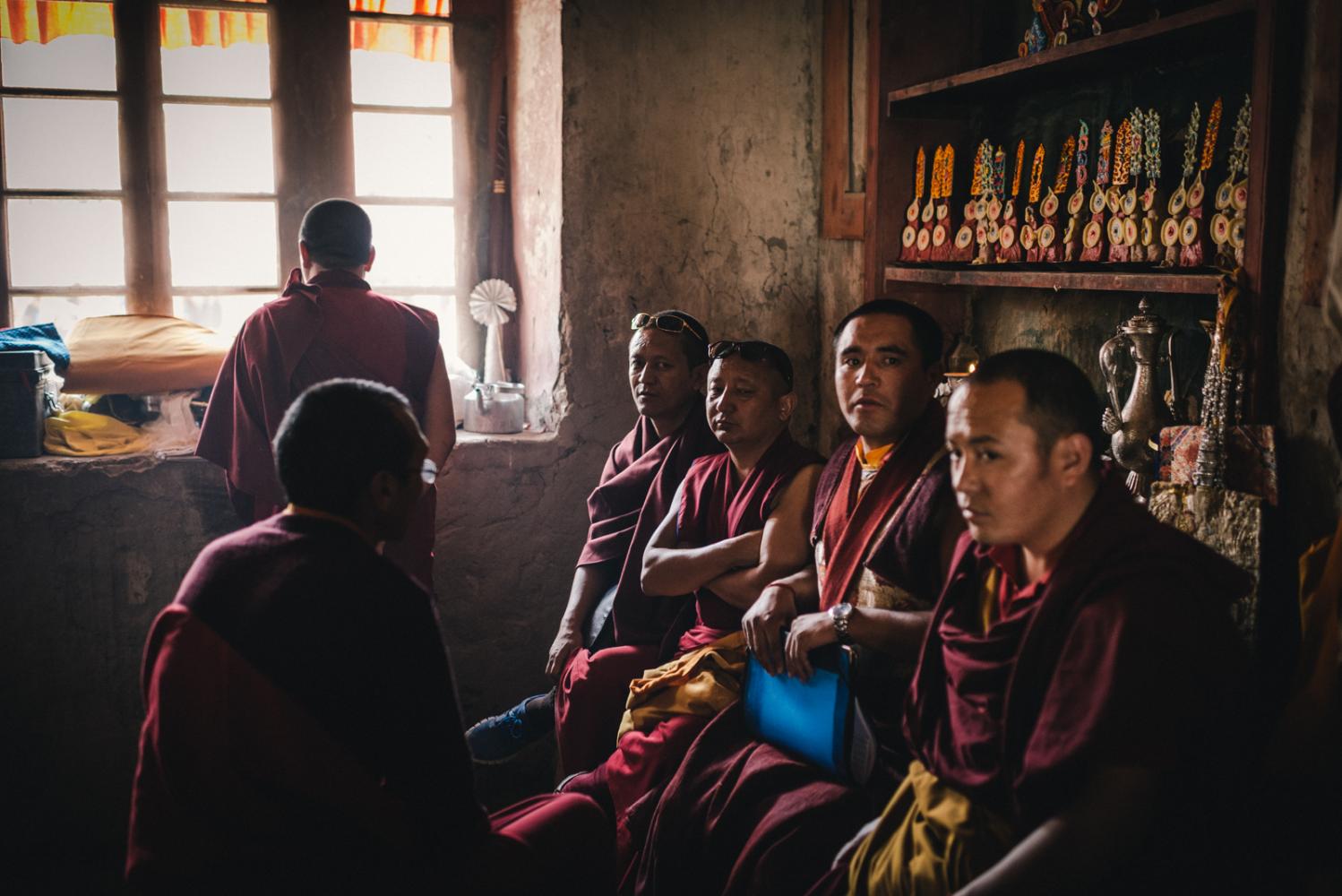 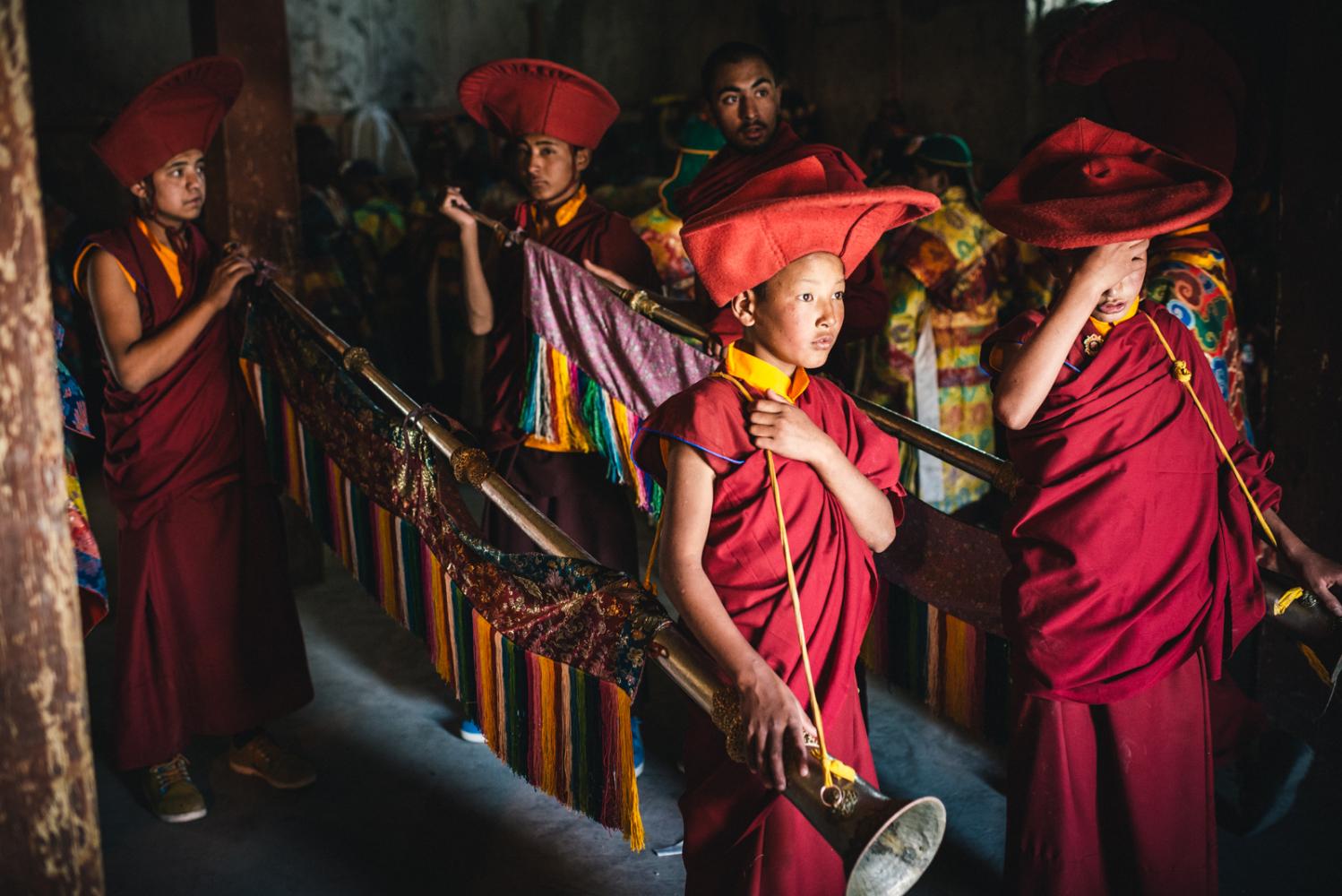 8 of 28 © 2020 Christopher Rubey
Young Buddhist monks and lamas in training steady their wits backstage to perform in the Phyang festival at Phyang Monastery, Ladakh. 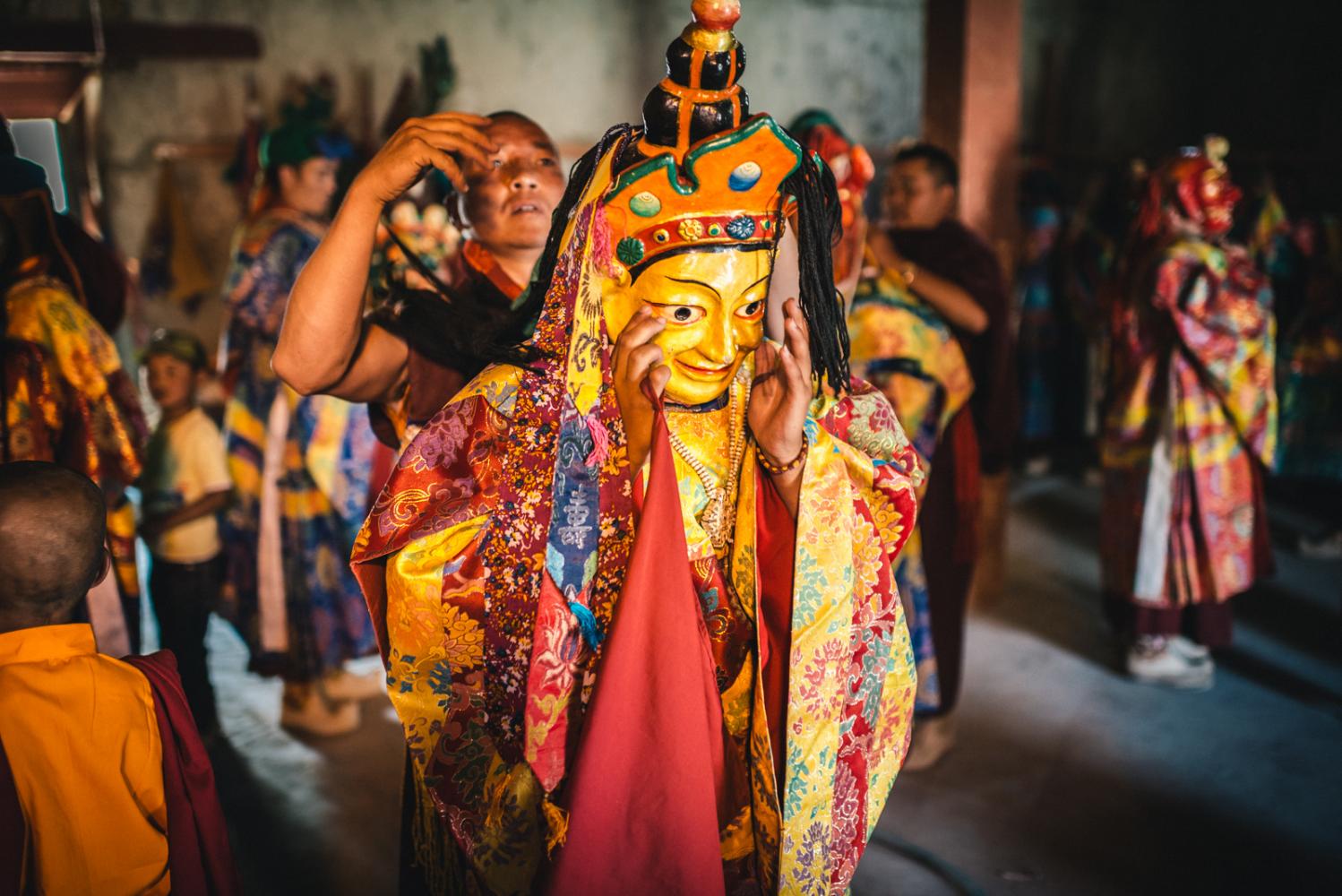 9 of 28 © 2020 Christopher Rubey
Monks at Phyang Monastery dress as Buddhist deities backstage and perform for mass throngs of spectators during the Phyang Festival. 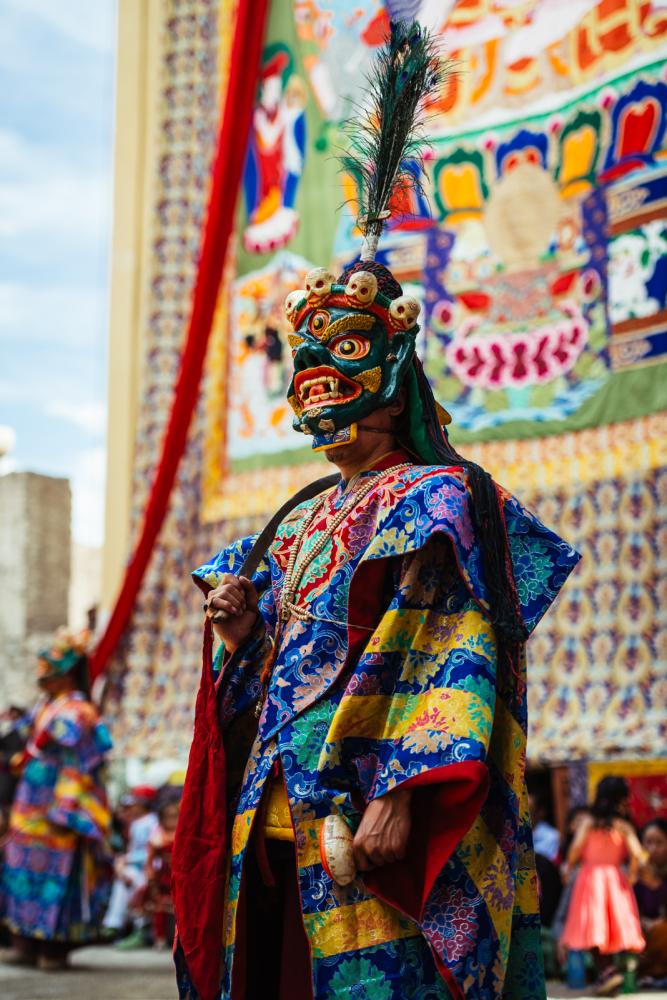 10 of 28 © 2020 Christopher Rubey
Monks at Phyang Monastery dress as Buddhist deities and perform for mass throngs of spectators during the Phyang Festival. 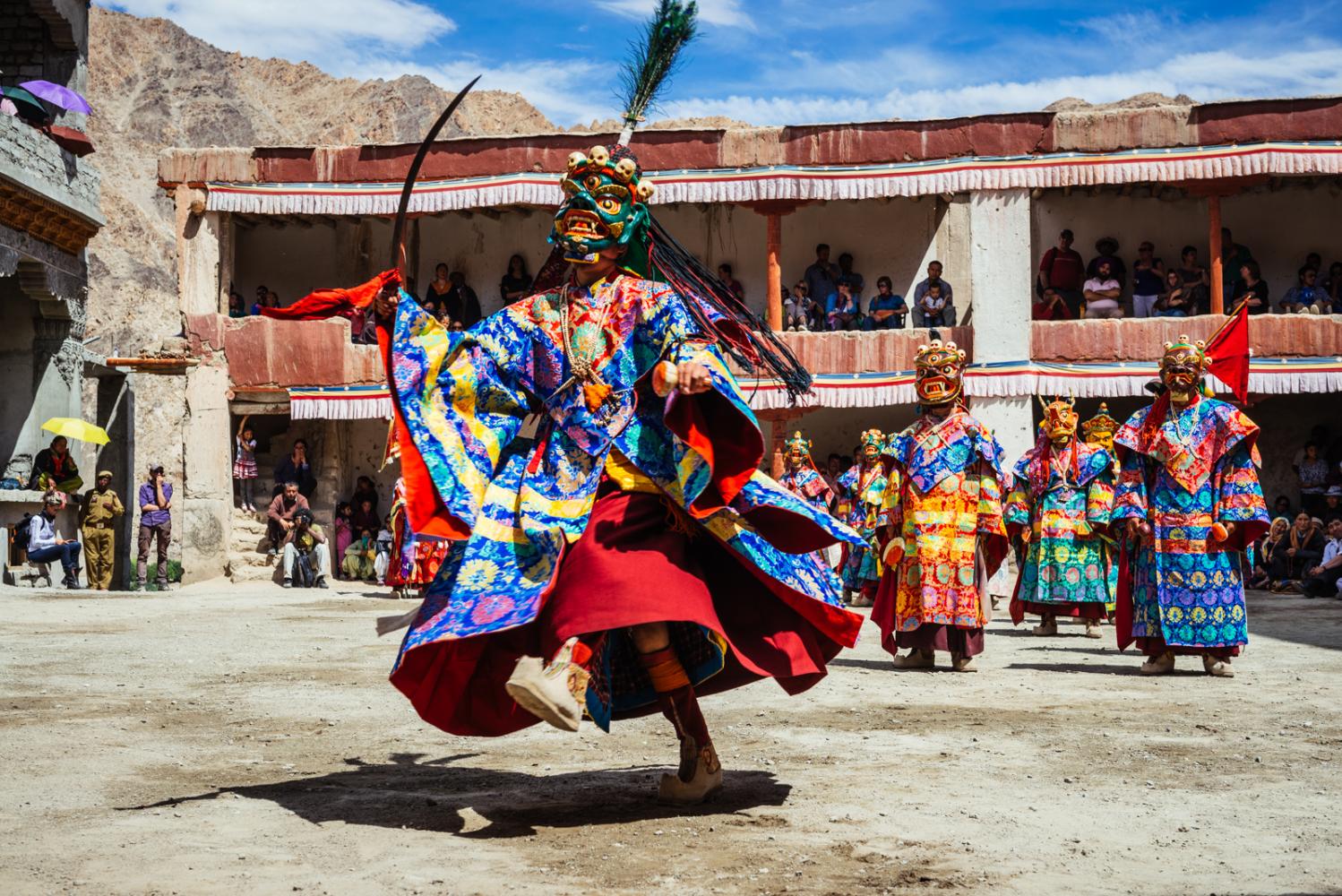 11 of 28 © 2020 Christopher Rubey
Monks at Phyang Monastery dress and perform as Buddhist deities and perform for mass throngs of spectators during the Phyang Festival. 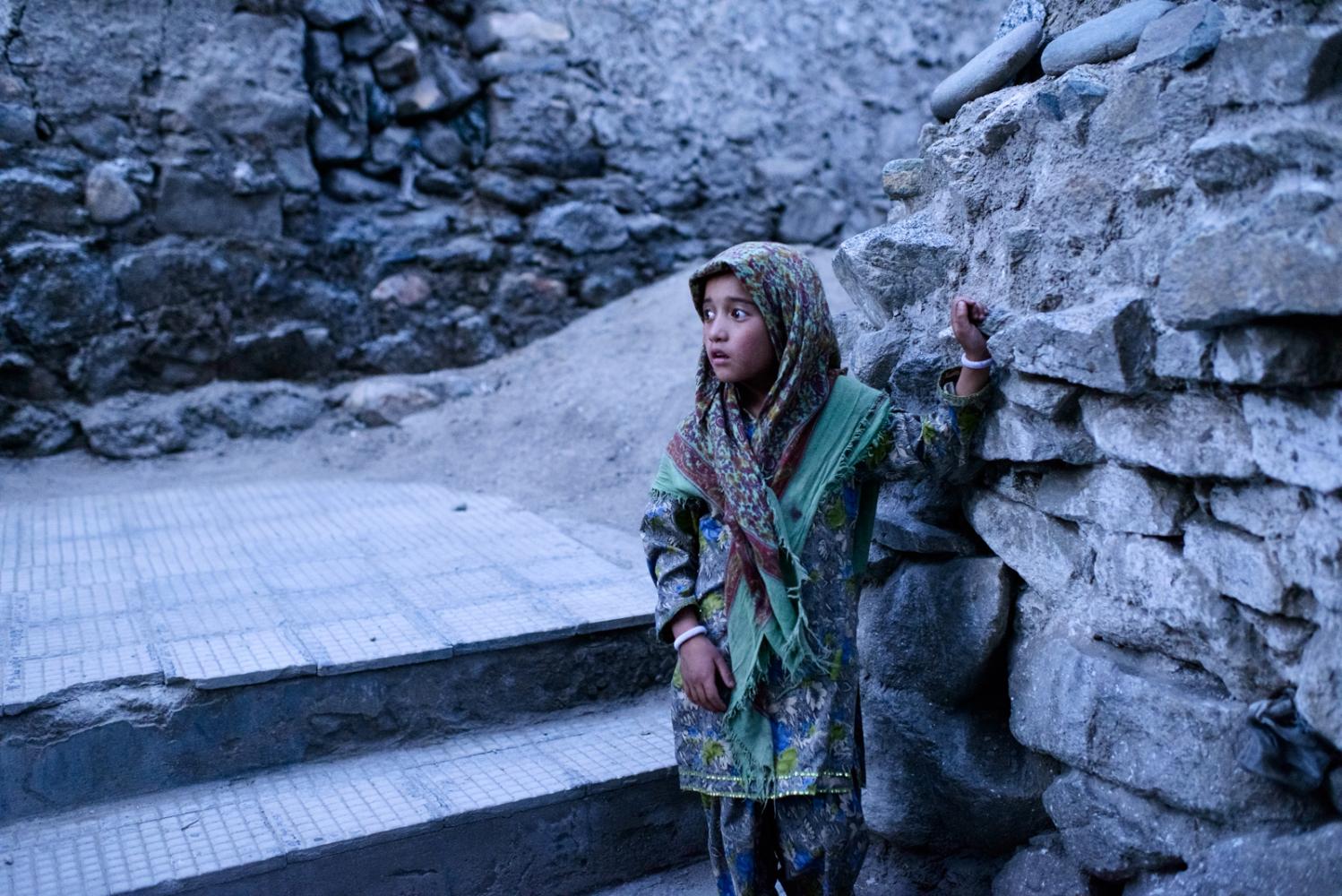 13 of 28 © 2020 Christopher Rubey
Jasmine, outside her home in Leh. With her cousins and neighbors, she sells postcards to tourists behind the central mosque Jamia Masjid. 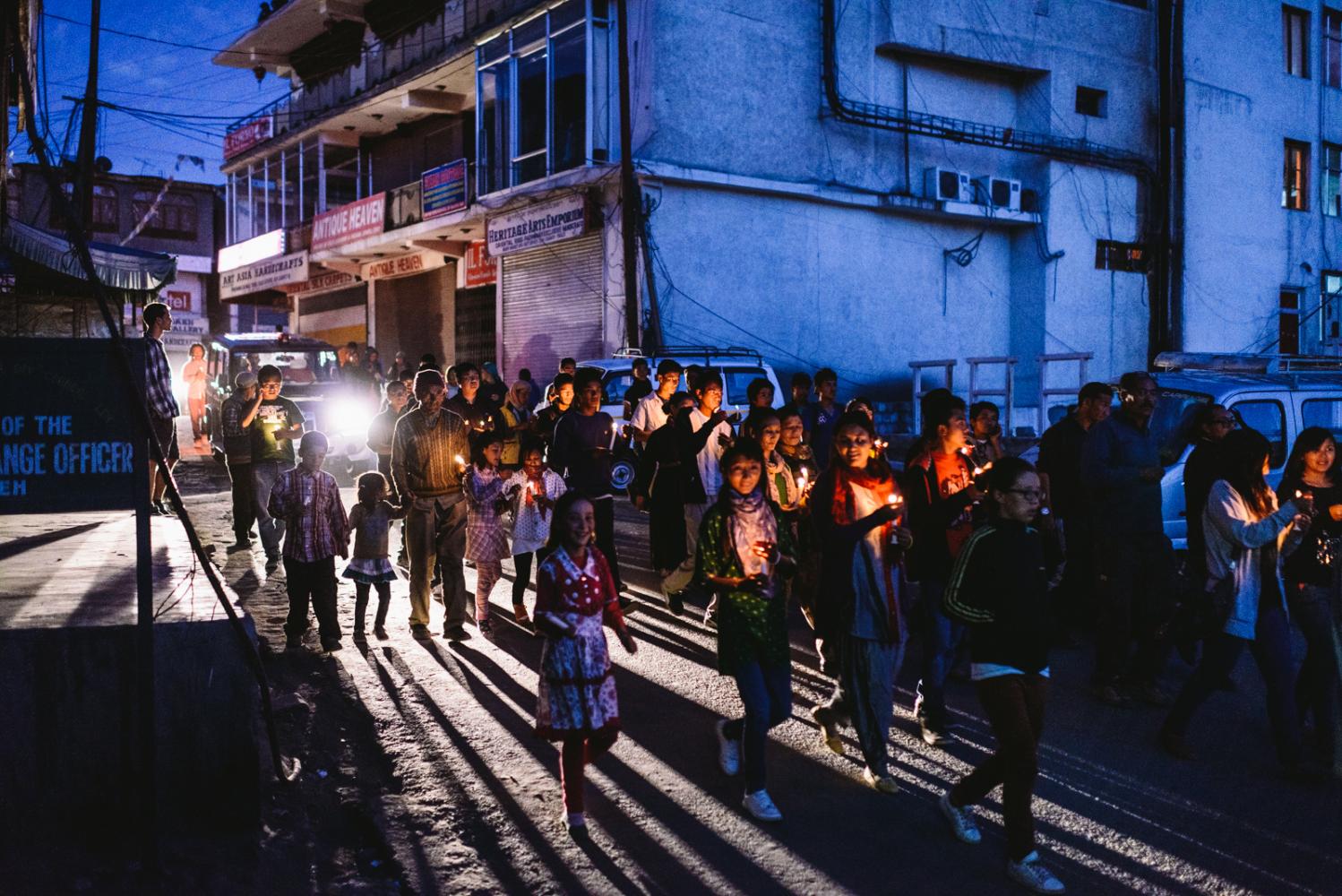 14 of 28 © 2020 Christopher Rubey
Buddhists and Ladakhi locals lead a peaceful candle vigil through the streets of Leh,  mourning victims of the Uttarakhand floods and the terrorist bombings of Bihar. The city wide blackout that day was said to be a sign of solidarity with the victims, but others say it was more likely due to faulty energy infrastructure and rolling blackouts in the region. 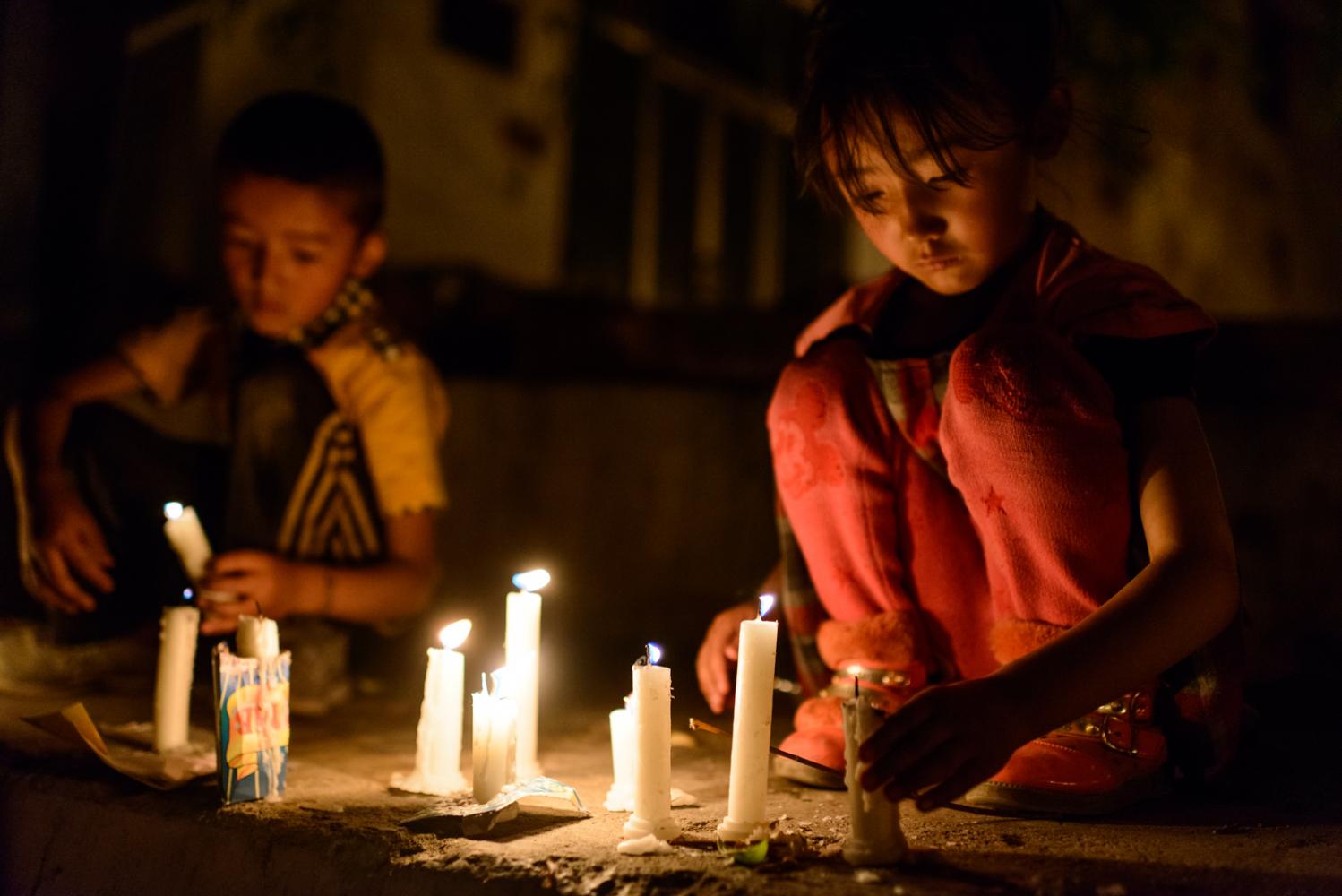 15 of 28 © 2020 Christopher Rubey
Local Ladaki children light candles at Jo Khang Gompa in the city of Leh, Ladakh, mourning the victims of the Uttarakhand floods. 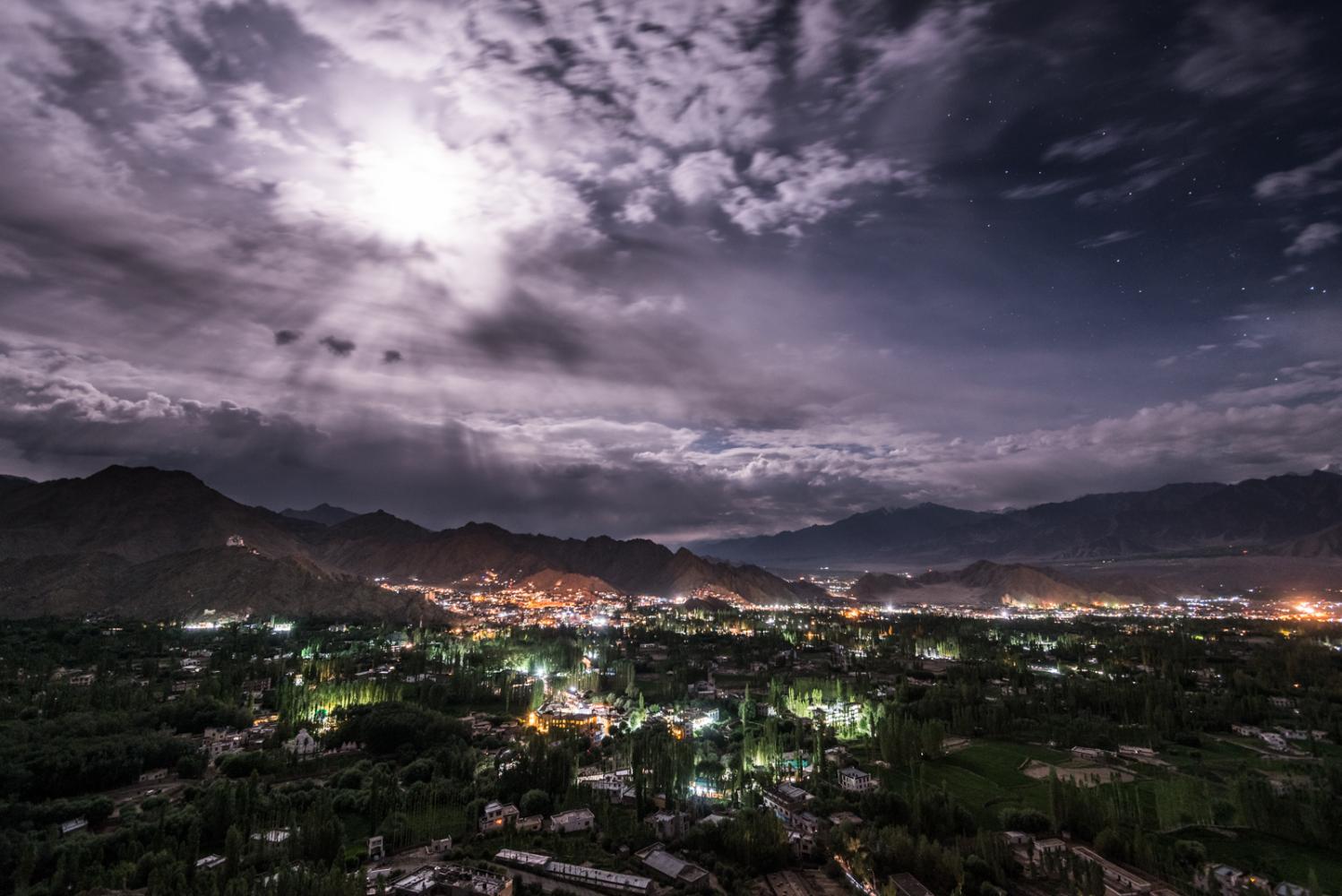 16 of 28 © 2020 Christopher Rubey
Clouds gather after a storm to obscure an illuminated moon hovering over the city of Leh, Ladakh. 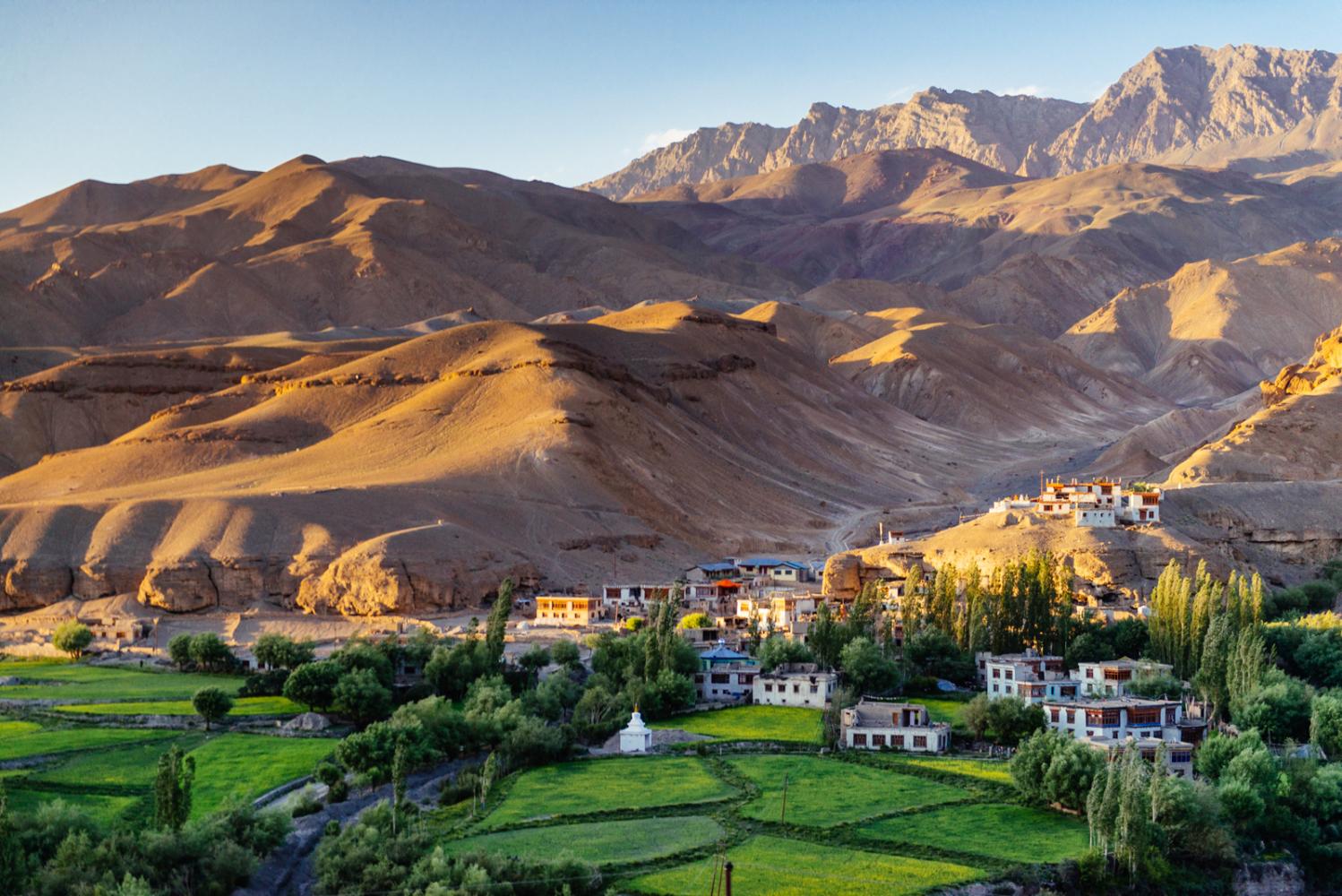 17 of 28 © 2020 Christopher Rubey
The Village of Budhkharbu from the Srinigar-Ladakh Highway. Ladakh, India. 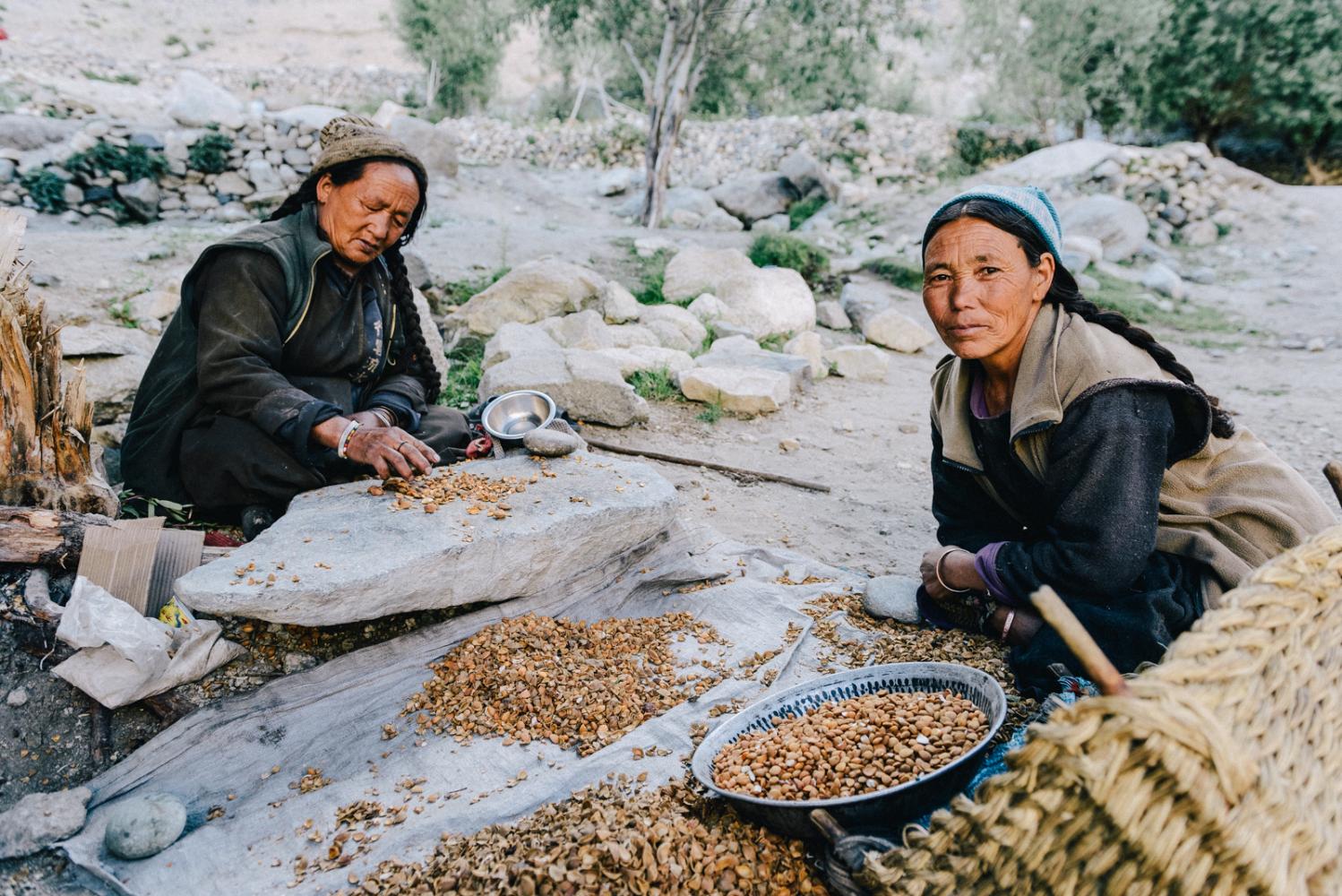 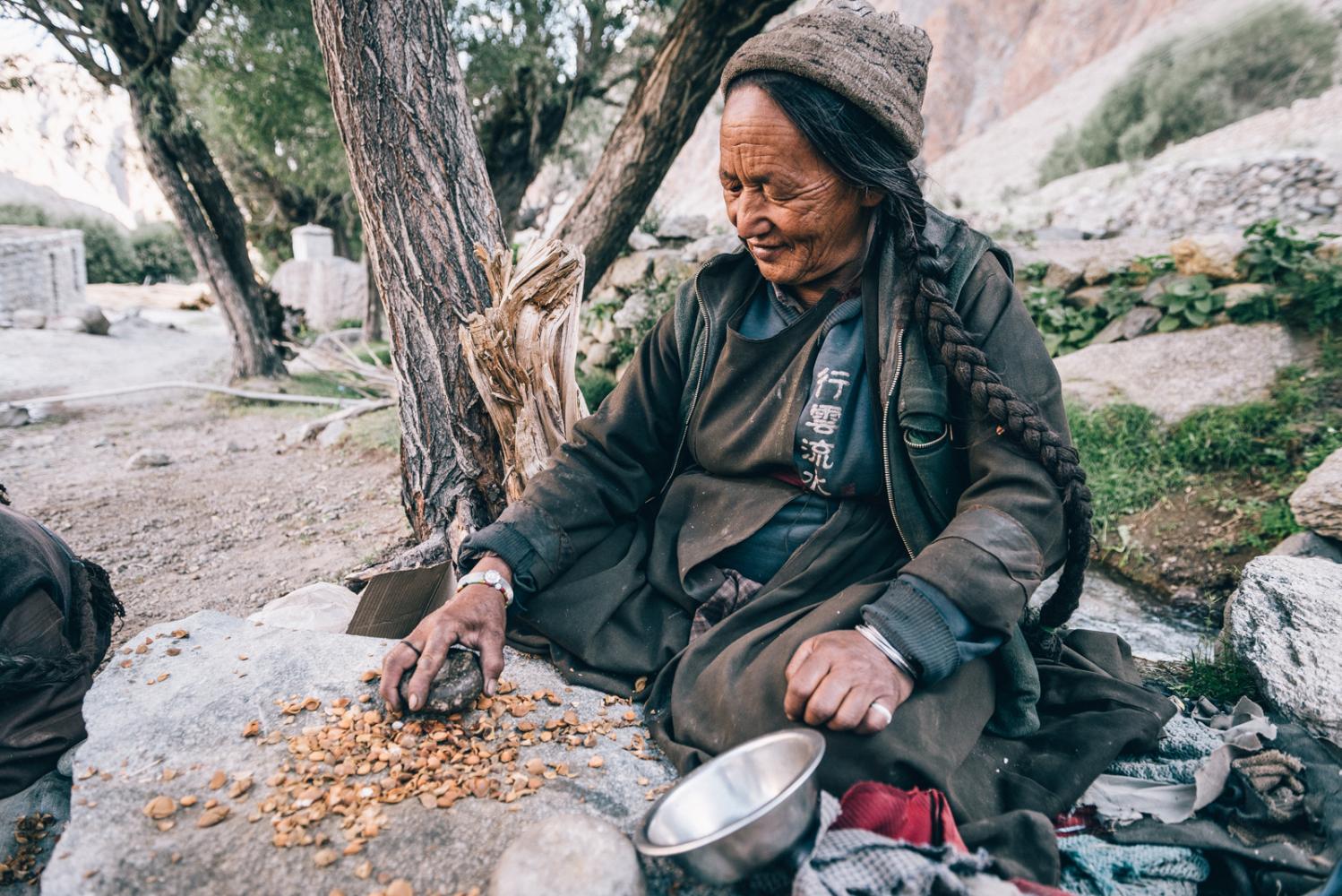 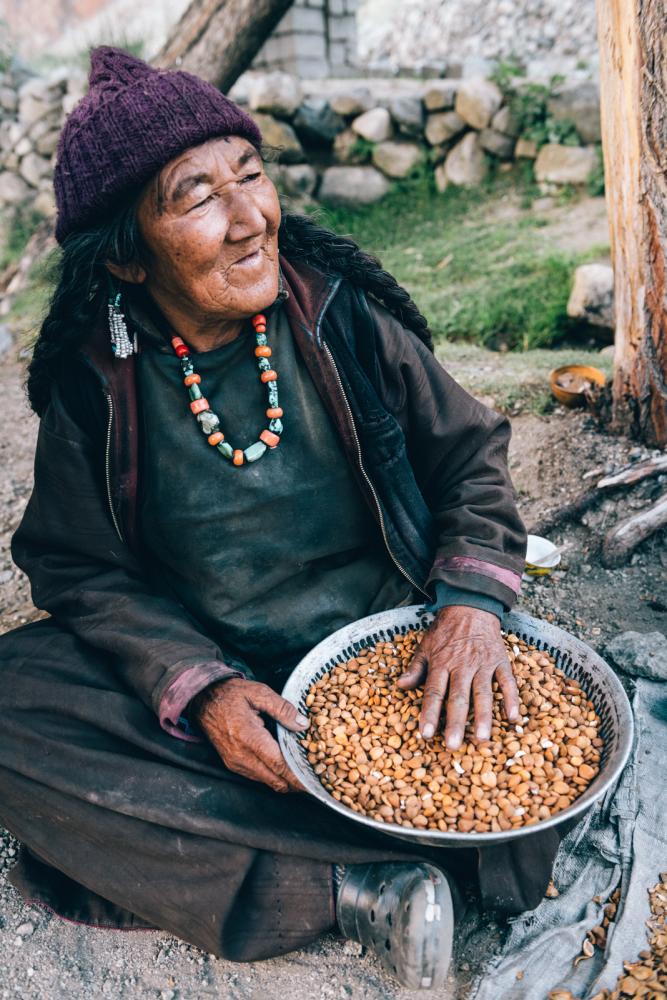 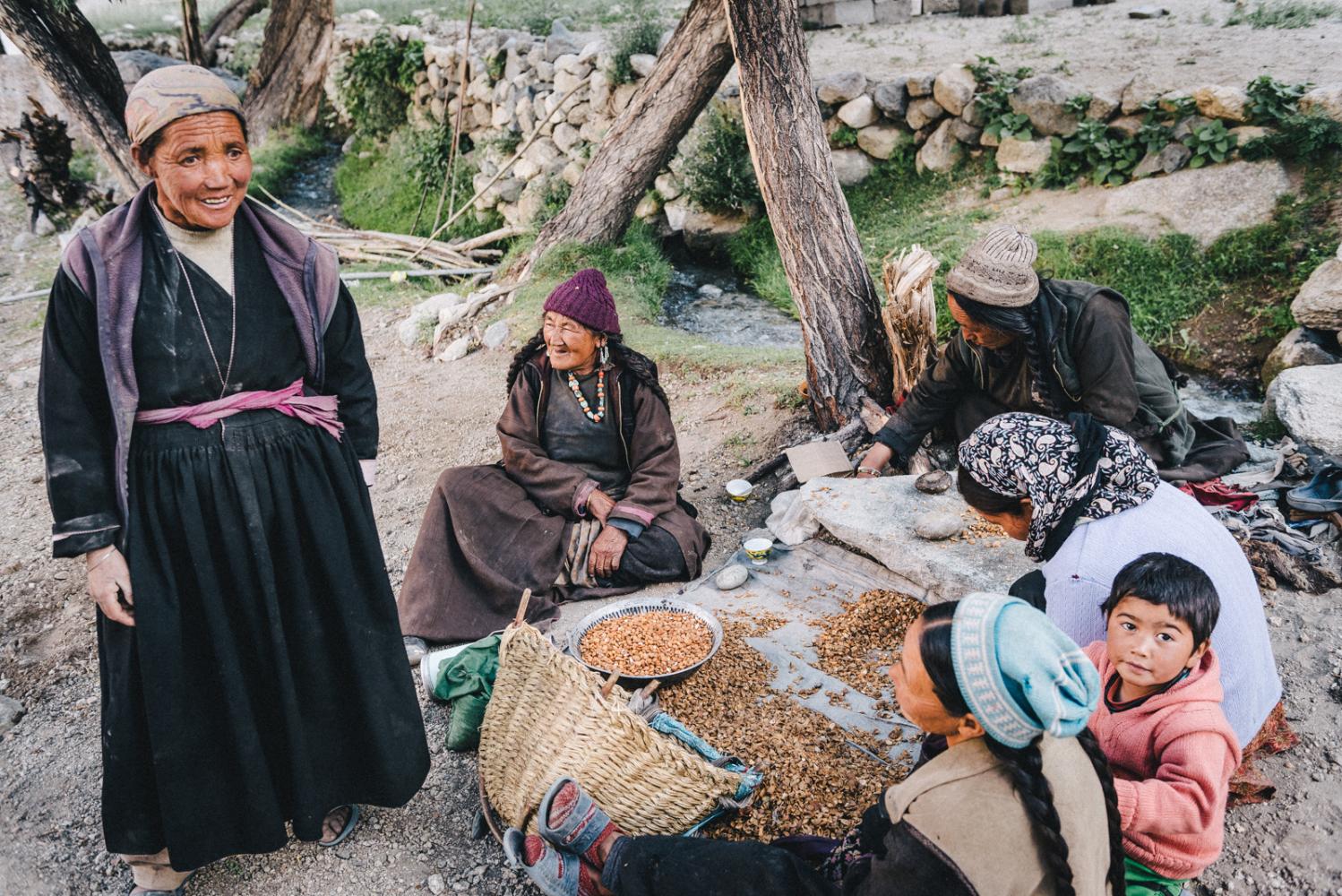 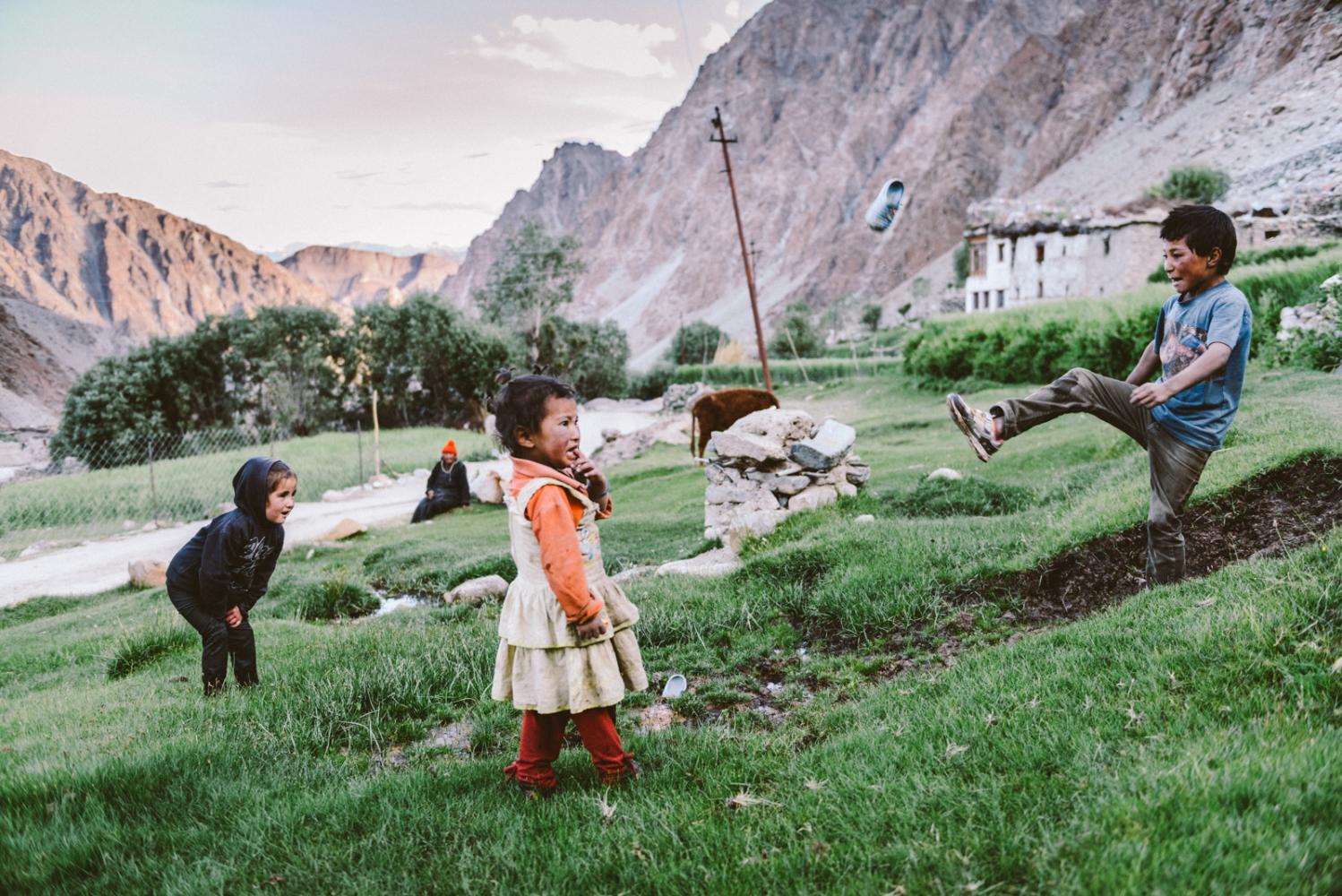 22 of 28 © 2020 Christopher Rubey
Local Ladaki children play in the grass before dinner in Domkhar Gongma village. 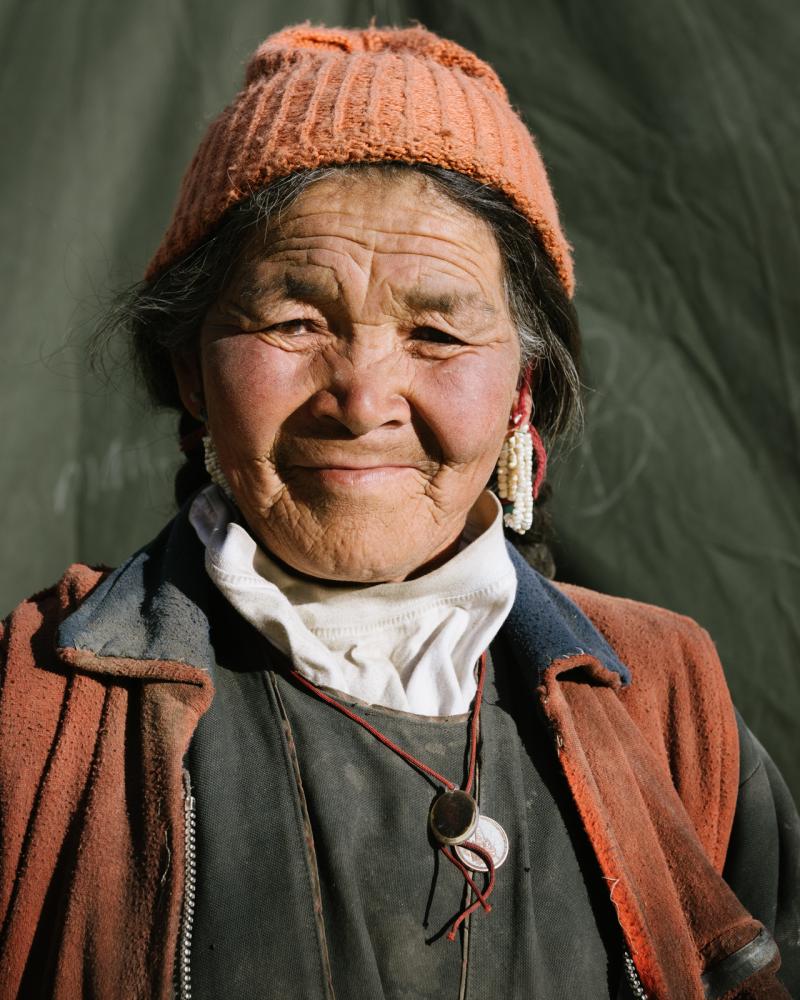 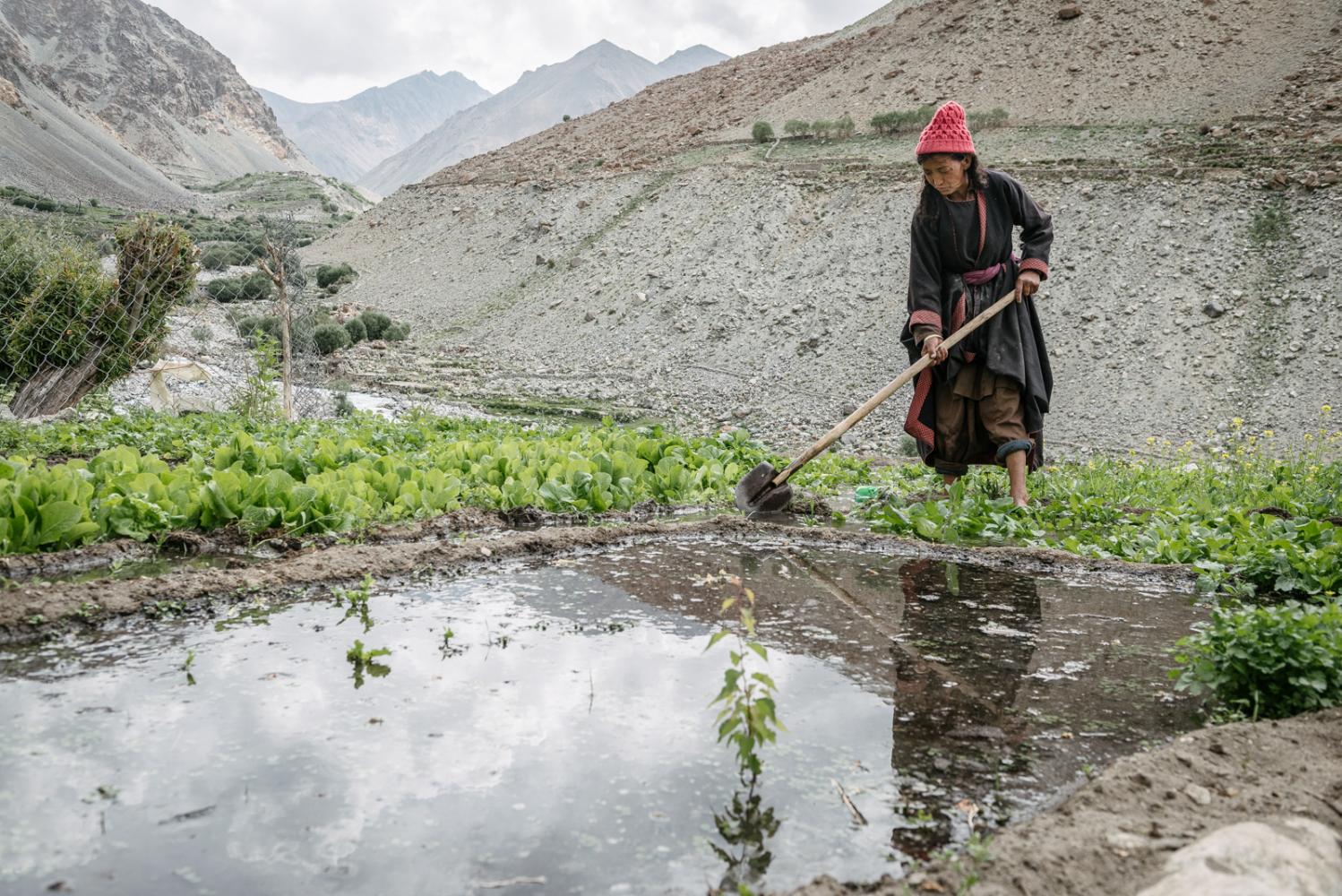 24 of 28 © 2020 Christopher Rubey
Tsering 'Dolker' Fomsapa, an elder of the Domkhar community, cultivates her crops outside her house.

25 of 28 © 2020 Christopher Rubey
Tsering 'Dolker' Fomsapa is an elderly woman of the rural mountain village, Domkhar Gongma. She was witness to the 2010 'cloudburst' superstorm events that devastated the region of Ladakh, destroying the livelihood of entire villages and families. Despite the tragedy, many Ladakhis maintain positive outlooks towards life, due to strong Buddhist principles involving the issues of life and death. 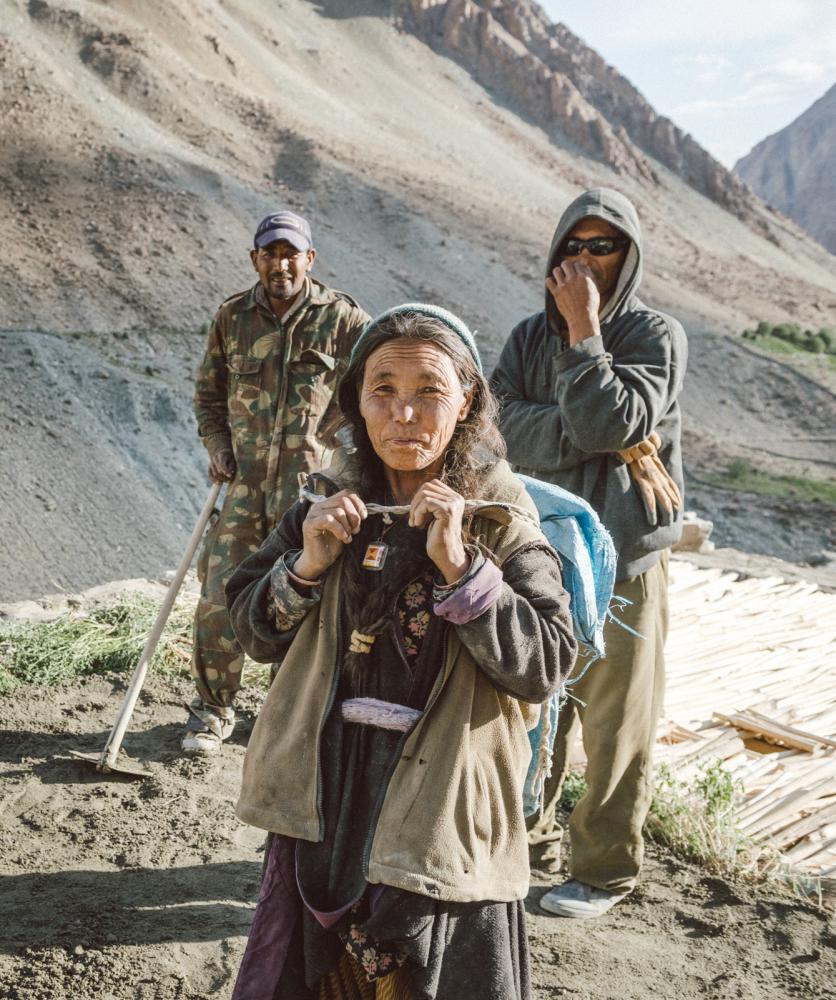 26 of 28 © 2020 Christopher Rubey
An elderly Ladakhi woman carries over 30 kilos of rocks and mud whilst accompanied by her family to help build a traditional house in Domkhar Valley, Ladakh, India. 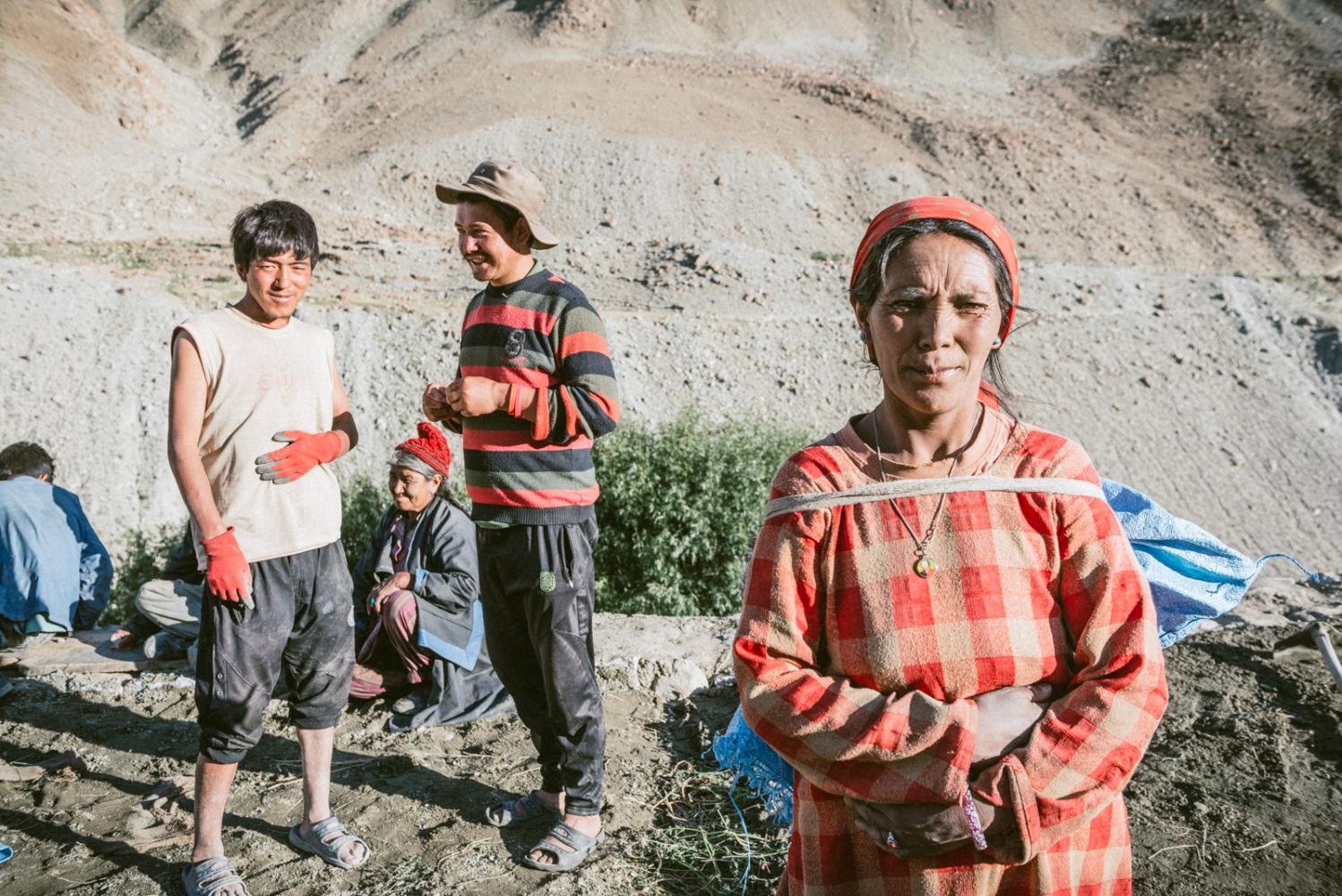 27 of 28 © 2020 Christopher Rubey
An elderly woman and locals of Domkhar Gongma work together to construct a house of mud, sand, clay, stone, branches, and other organic materials. 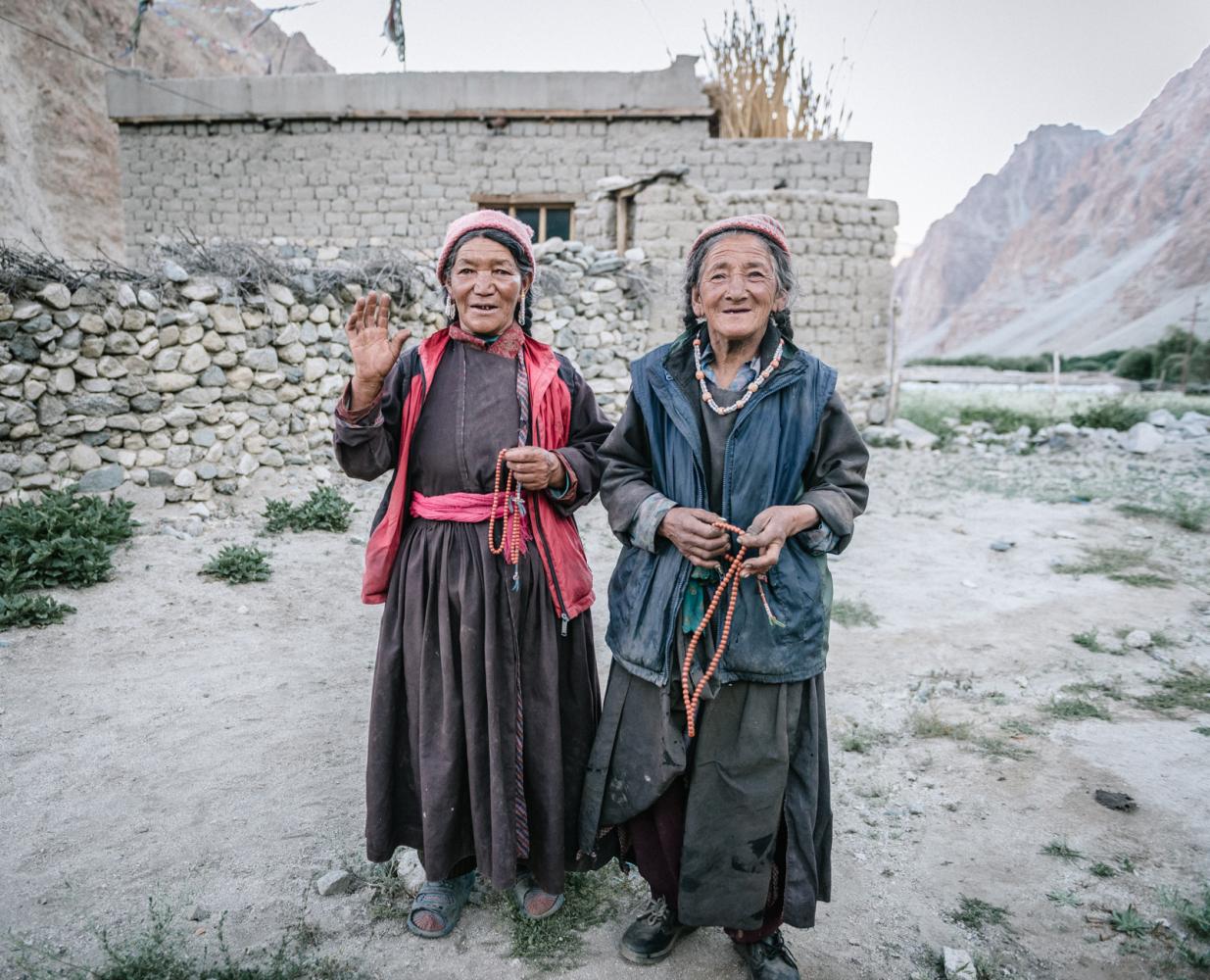 'Ladakh', which translates as 'the land of high passes', was one of the most historically important hubs of trade and commerce of the Silk Road in ancient times, and which also served as a gateway between China, India, the Muslim world, and the far reaches of Europe. For thousands of years the people of Ladakh have maintained their traditions and methods of survival in one of the most harsh, arid, and high elevation mountain ranges of the world. Heavily influenced by Tibetan Buddhism from the North, Sunni Islam from Kashmir and Pakistan in the West, and Hindi dominance from the South, Ladakh rests on the edges of many civilizations. It is an ancient kingdom jeweled between the ancient religions, geopolitical powerhouses, as well as the eyes and curiosities of modern globalism, where the mountains caress the heavens, and where ancient glacier waters channel into the currents of life.

I accompanied a team of geologists from the University of Edinburgh on an expedition to research, examine, and measure the changing ablation rates of prehistoric glaciers amongst the Himalaya and Karakoram mountain ranges due to climate change. Although my primary mission was to record, document, and analyze, I had found myself captivated and enamored with the people of the land. Everywhere we went we were greeted with open arms and hot tea; into homes, into temples, into lives and customs that were completely foreign to our Western belief systems and ways of interacting.

This ongoing collection of images aims to celebrate and highlight the beauty, strength, and purity of the Ladakhi people, the pureness of their culture, the simplicity of their traditions, the warmth of their hearts, and the way in which they continue to live from the Earth, and for the Earth. With stark contrasts between the hamlet of Phyang, the city of Leh, and the village of Domkhar Gongma, I wish to demonstrate the resilience of indigenous peoples over the years when they choose to live off the land like their ancestors once did.

By Christopher Rubey / Cohamiata, Jalisco — Jicuri Nierra is one of the most important celebrations of the 'new year' for the Wixarika (or..
Nov 18, 2019

Street Shots from Around the World

By Christopher Rubey / Ladakh, Jammu & Kashmir, India — Water is life. The Ladakhi and Kashmiri people of northern India live by this wisdom. Ladakh being one of..
Mar 14, 2018

We Sing To The Plants

By Christopher Rubey / Cali Colombia — We Sing To The Plants Across the world gathers a global community of conscientious men, women, and children..
May 23, 2017