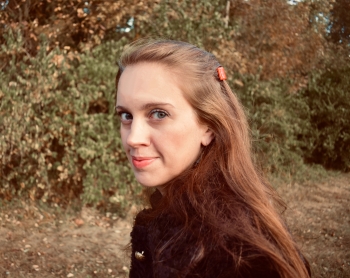 Photographer @ Freelancer / Based in Bloomington, IN, USA

Kathryn's "The Majorette" (2022) was included in Cerulean: A Winter Photography Exhibit by Pattern magazine. Her piece "Get Your Jollies" (2022) was deemed "too lurid" for display in the exhibition for which it was created in September 2022, but can be seen at Backspace Gallery as part of Accrete Art Collective's "Something Figurative, This Way Comes" - on now!

Known for images showcasing fantastic beauty and sweeping neglect, the allure Kathryn displays may hide an insidious evil. Emphasizing theatricality and absorption, bordering on fantasy and surrealism, her work is less about identity, politics and individualism than collective escape. She problematically offers nostalgia as a distraction from unpleasant realities and enjoys mixing tangible objects both hard and soft with thematic elements that are cozy and challenging, highbrow and kitsch. The self-described "Lisa Frank" of photo editing, she creates cinematic compositions and utilizes vivid colors that pop!

Her portraits occur within perfectly manicured sets with curated vintage clothing, props and backdrops built around her subjects like oversized dollhouses. She learned photography as an eBay reseller during The Great Recession, selling thrifted jewelry to Courtney Love at Chateau Marmont and frequently landing on Etsy's front page. She was self-employed as a product photographer for a decade before compiling her fine art and editorial portfolio.

Kathryn, influenced by 1980s punk subculture, wants to engage the most provocative topics she can find. She believes that individualism is a disempowering, isolating force. Kathryn tries to build bridges by displaying our inherent commonality. She believes photojournalism should be a tool to challenge, rather than affirm, our convictions.
An Indiana native, Kathryn is committed to capturing the Midwest with authenticity. She will not employ gimmicks or clichés about flyover country in her work and is not seeing rural America for the first time. Kathryn is a proud Hoosier who believes in the dignity and ingenuity of her neighbors and home state. She is deeply concerned about cultural divisiveness, hopes her work is void of political influence and claims no political affiliation whatsoever.
Kathryn may capture politicized topics, but endeavors with great intentionality to do so without bias. She feels that Midwestern stories should be told by Midwestern photojournalists. Kathryn pursues underrepresented topics. She believes that documentary photographers must be polite observers and that everyone she photographs is owed her full attention and respect.
Kathryn is happily married and is the proud mother of a four-year-old son. A Hoosier, she left her home state for twenty years, working in Silicon Valley, New York City's East Village and South Florida, before returning to Indiana. Her cousin, photojournalist Michael Coers (deceased), won the Pulitzer Prize documenting school integration for the Louisville Courier Journal in 1975.
Sign-up Log In
Cart
Loading...
Edit Check Out