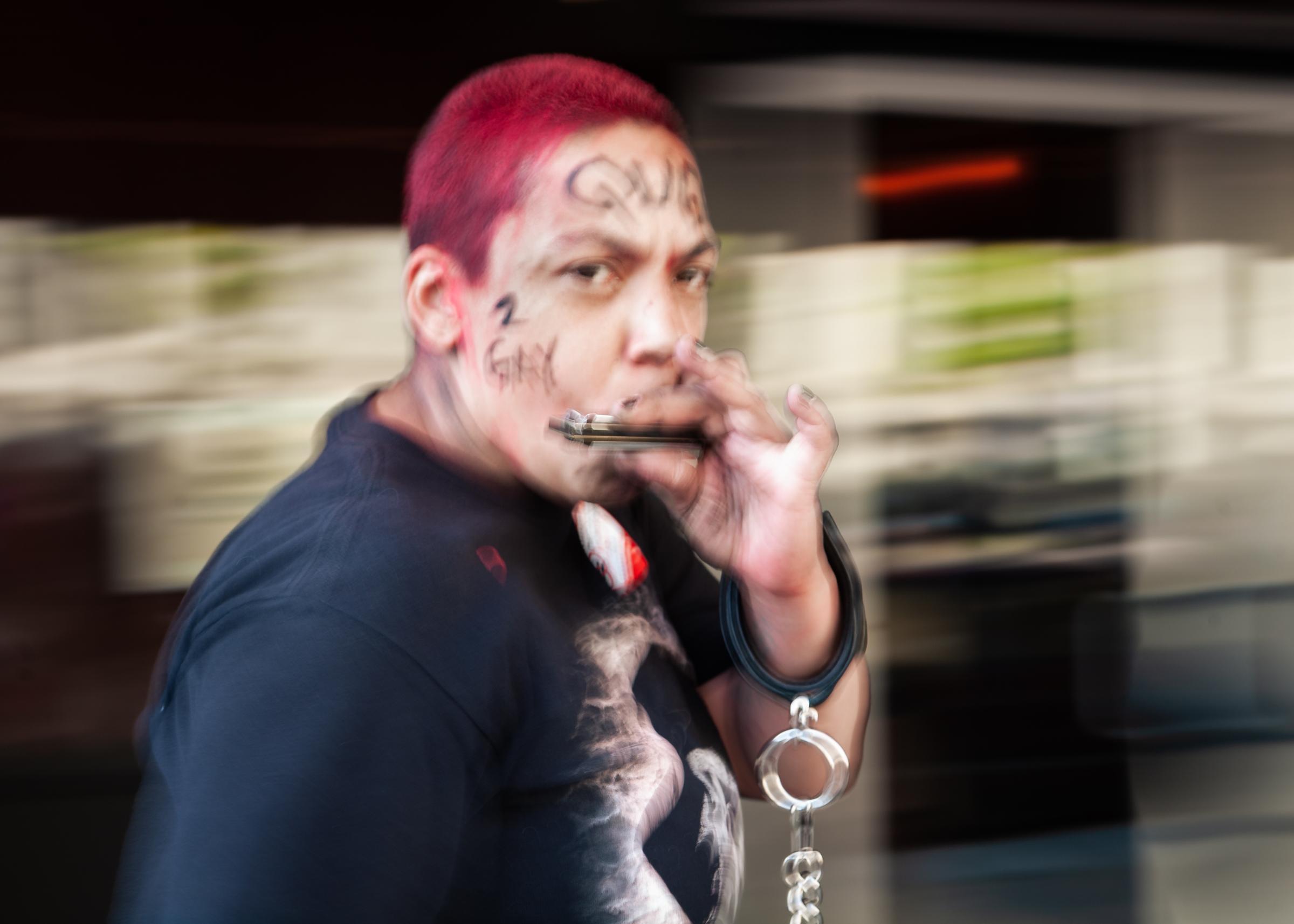 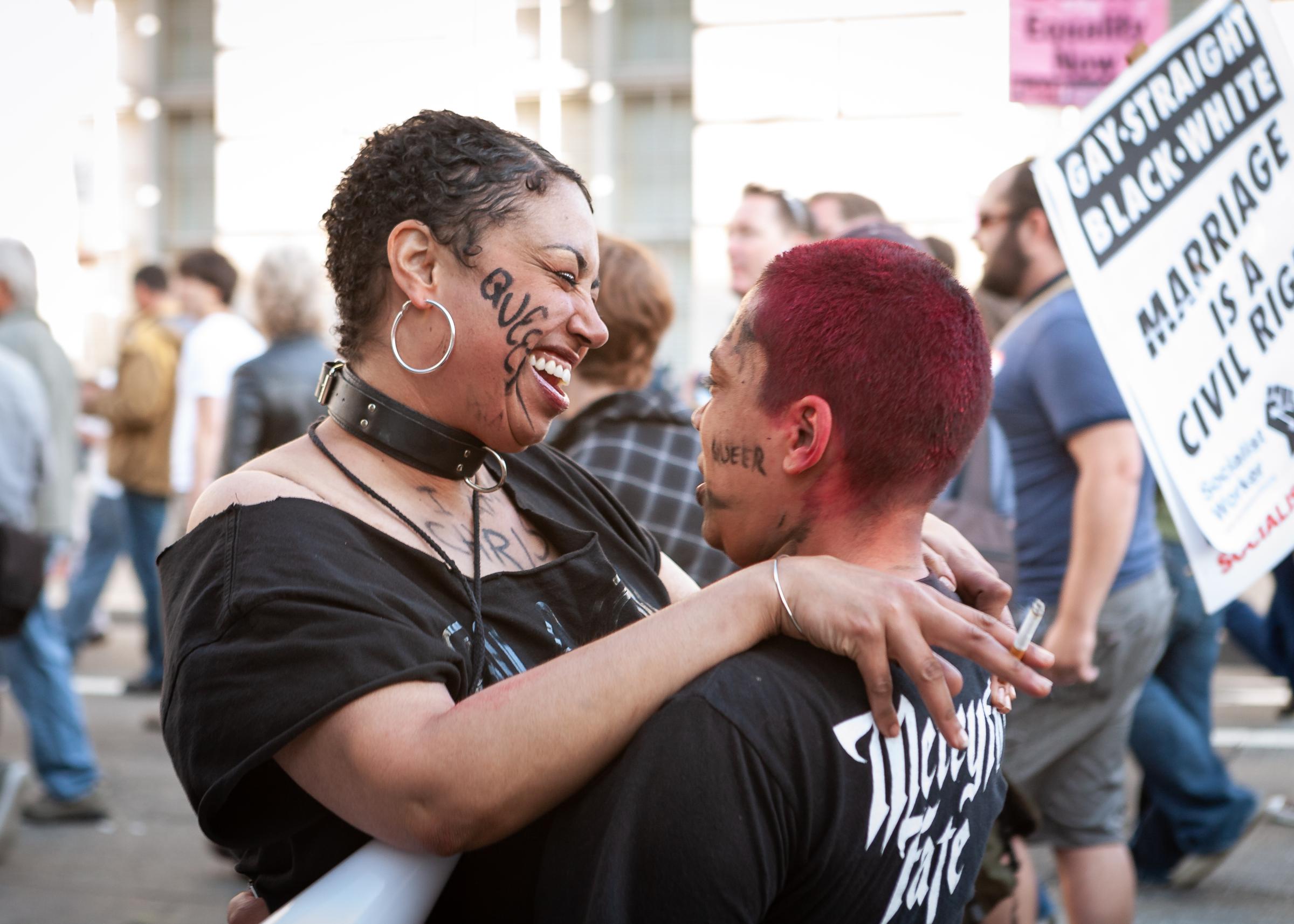 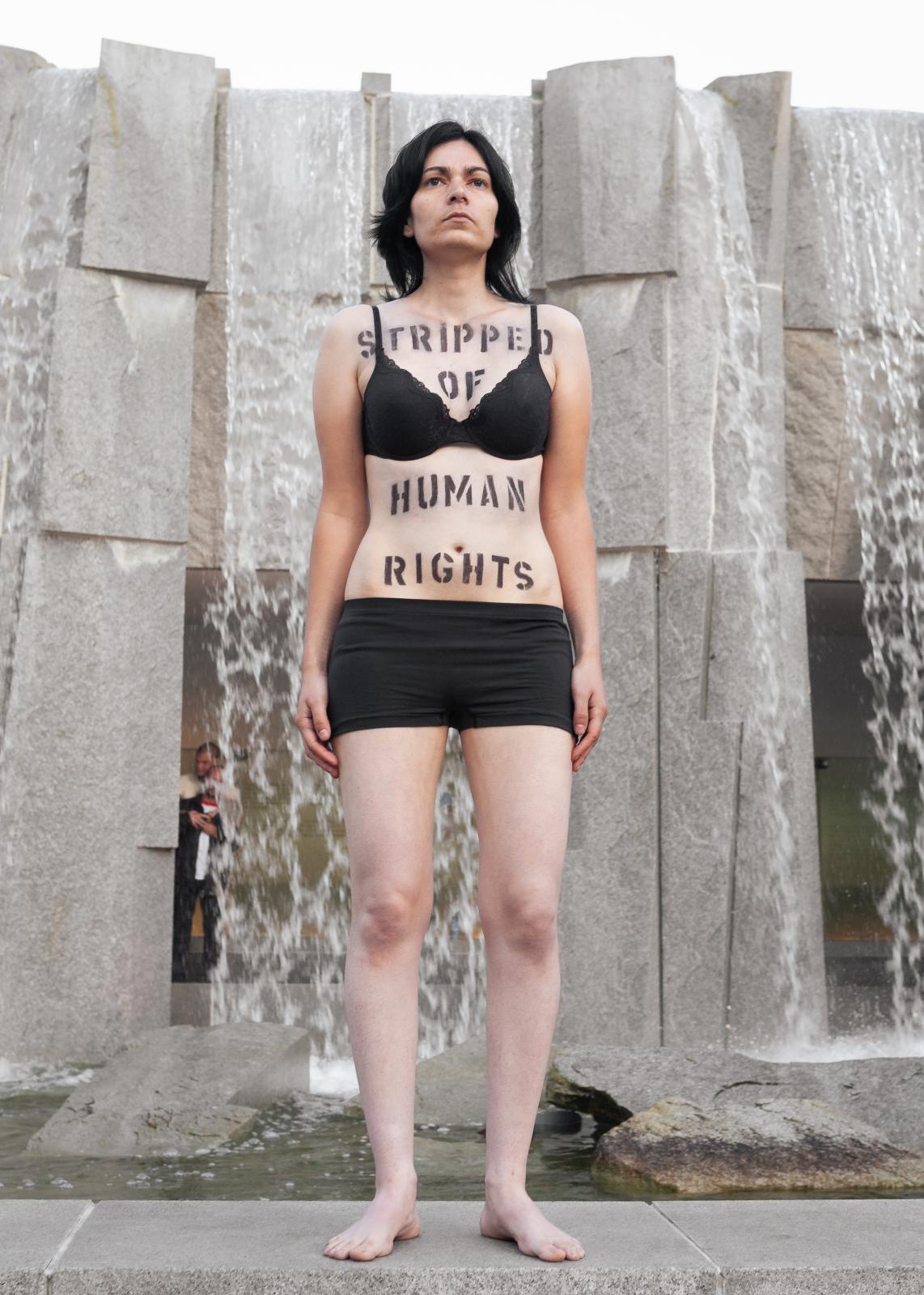 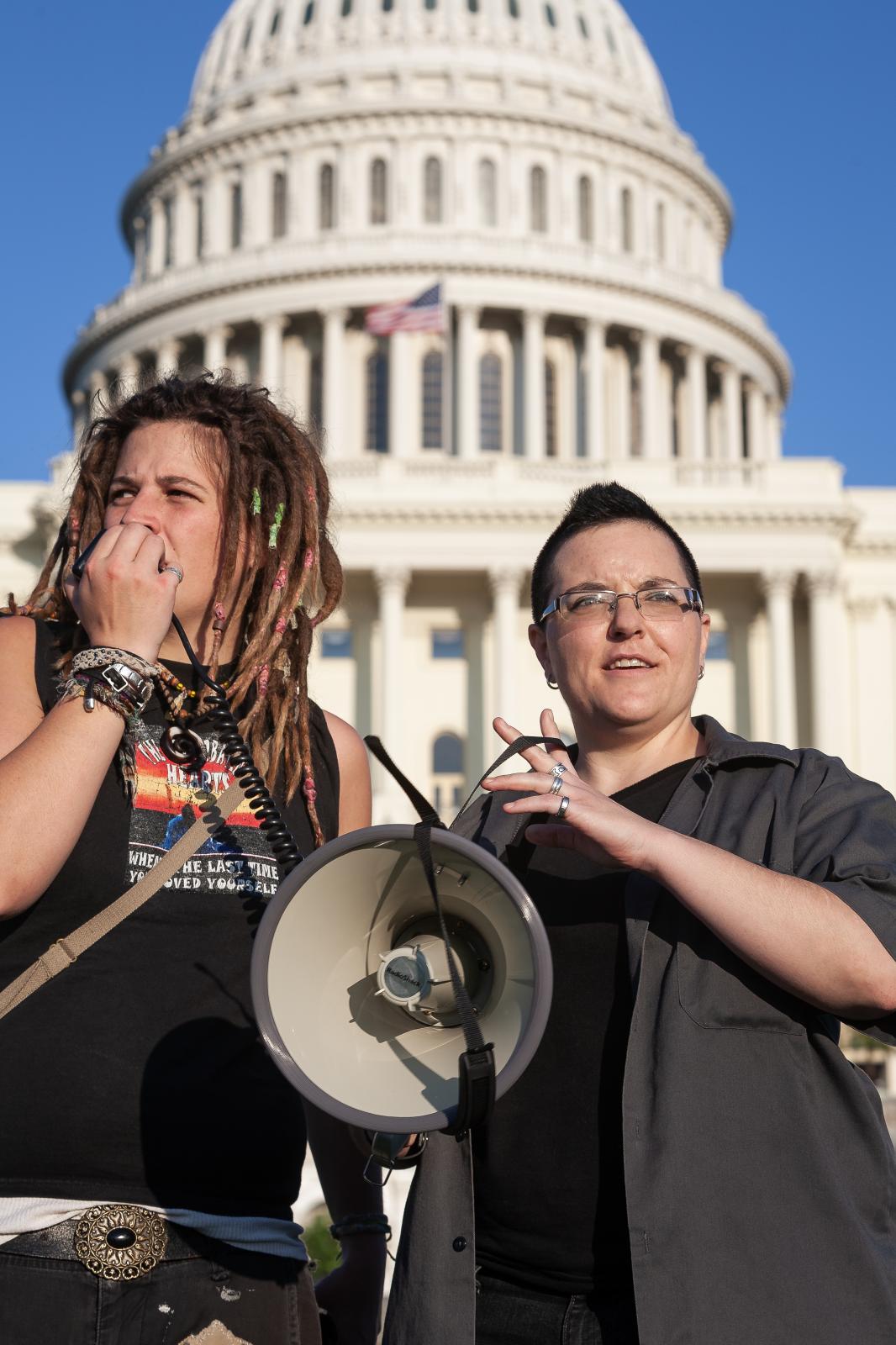 After discovering that out of the1.6 million homeless youth in America, 40% of them are LGBTQ, Cai Noble and Jill Harden sold everything they owned, bought a camcorder and in May 2009 set out to walk across the US and sleep outdoors in solidarity.This was a 6000 mile journey. Photographed in Washington DC on October 9, 2010. 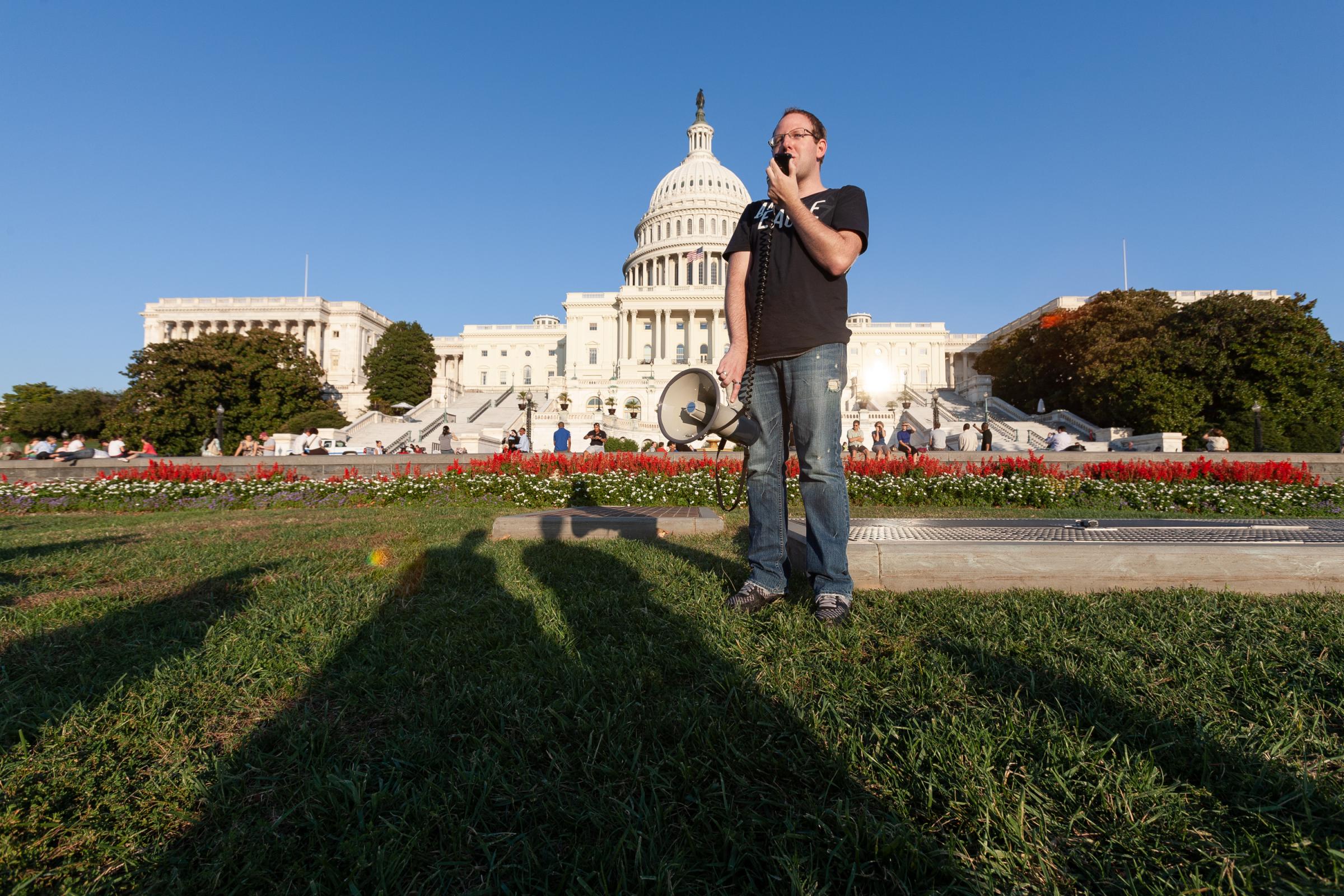 In the events leading up to the National Equality March, Cai Noble and Jill Harden organized a Youth Speakout in front of the Capital Building. Individuals were asked to share their coming out stories and the losses that they had faced after coming out to friends and family. 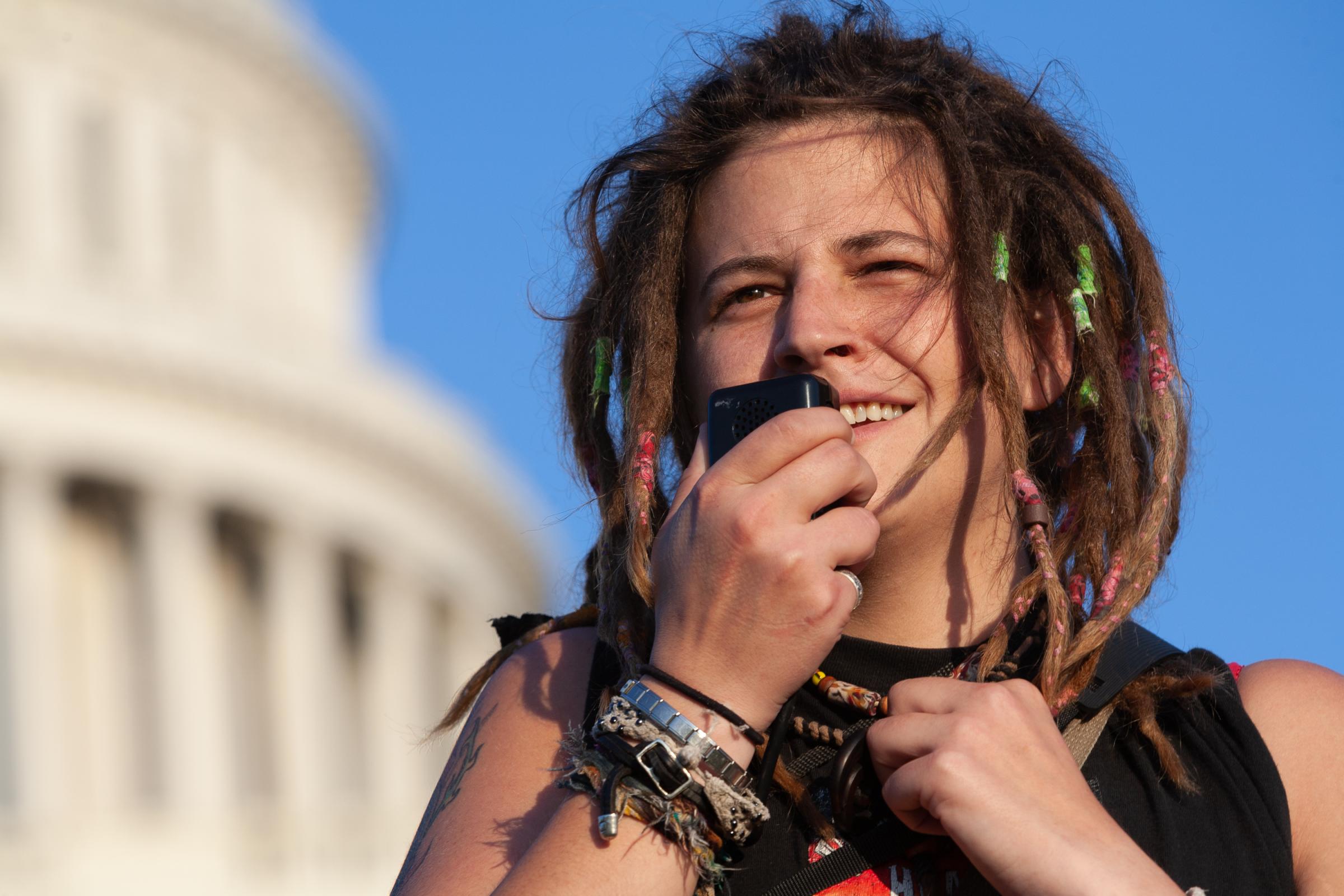 Jill Harden, aka Little Lion, organizer of the Shine Youth Speakout, shares her own experience. 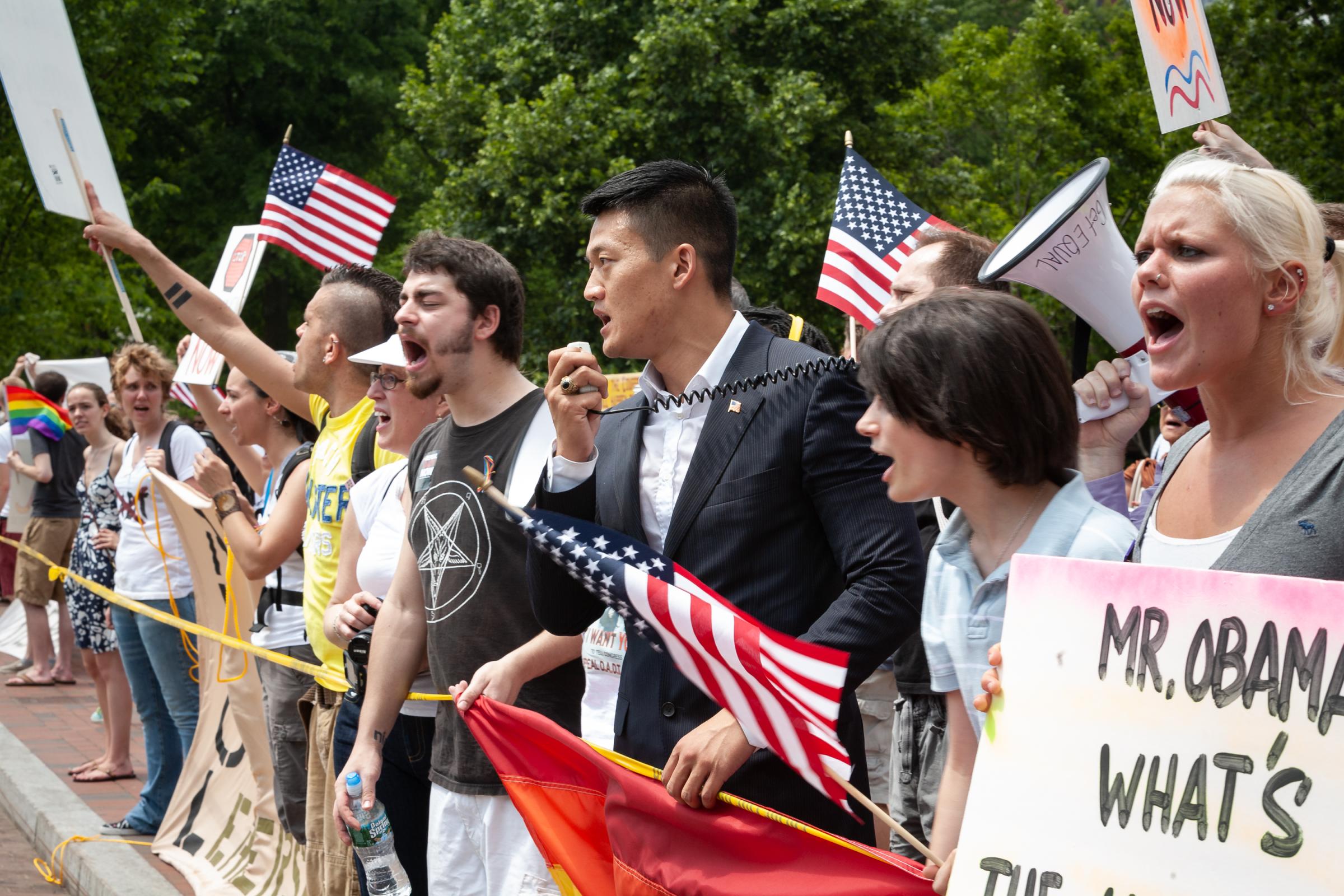 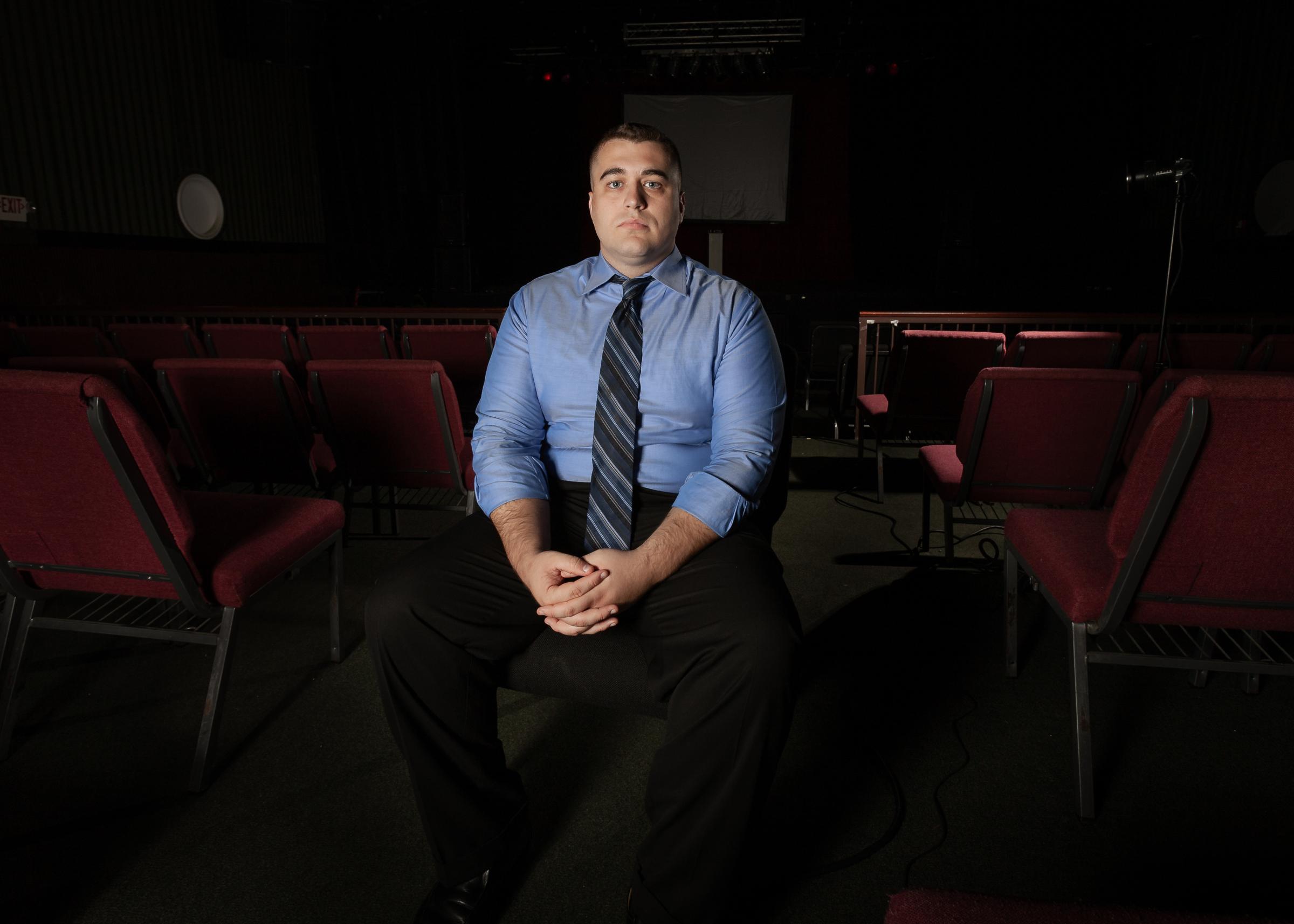 Alexander Nicholson was a U.S. Army human intelligence collector who was discharged from the military because of DADT just six months after 9/11. Nicholson, along with Jarrod Chlapowski, developed the Call to Duty Tour, a public initiative geared at putting a human face on DADT. 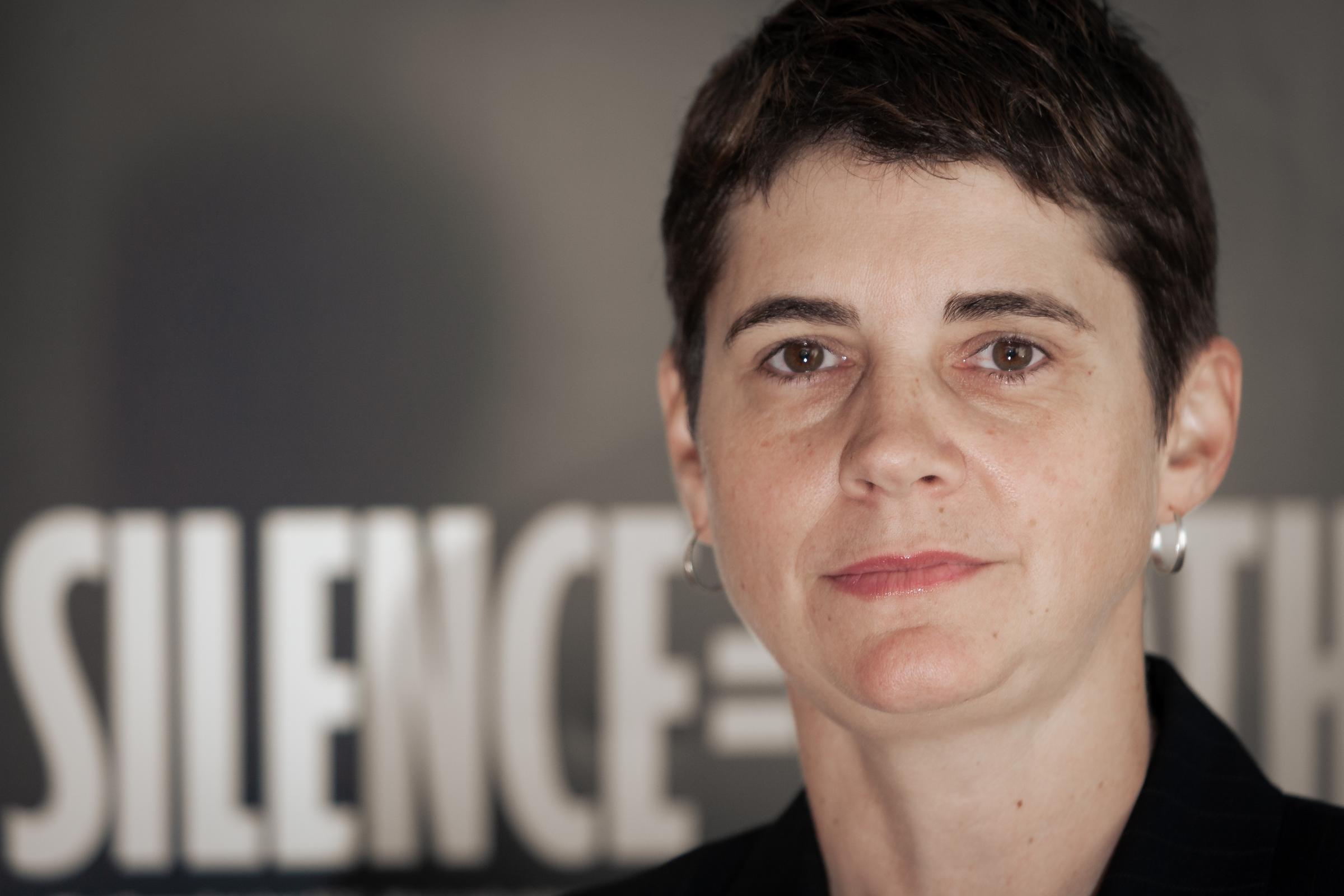 Rea Carey, executive director of the National Gay and Lesbian Task Force, is one of the most prominent leaders in the U.S. LGBT rights movement. Carey, who came to the Task Force in 2004 as deputy executive director, served as executive director from 2008 to 2021. Through her leadership, she advanced a vision of fairness and justice for LGBT people and their families that is broad, inclusive and unabashedly progressive.  Carey played a vital role in getting the U.S. Census Bureau to report married same-sex couples in the 2010 census. Prior to coming to the Task Force, Carey worked extensively in HIV/AIDS prevention and in the LGBT community as one of the co-founders of Gay Men and Lesbians Opposing Violence and the founding executive director of the National Youth Advocacy Coalition.  She is pictured here days before the National Equality March in 2009. 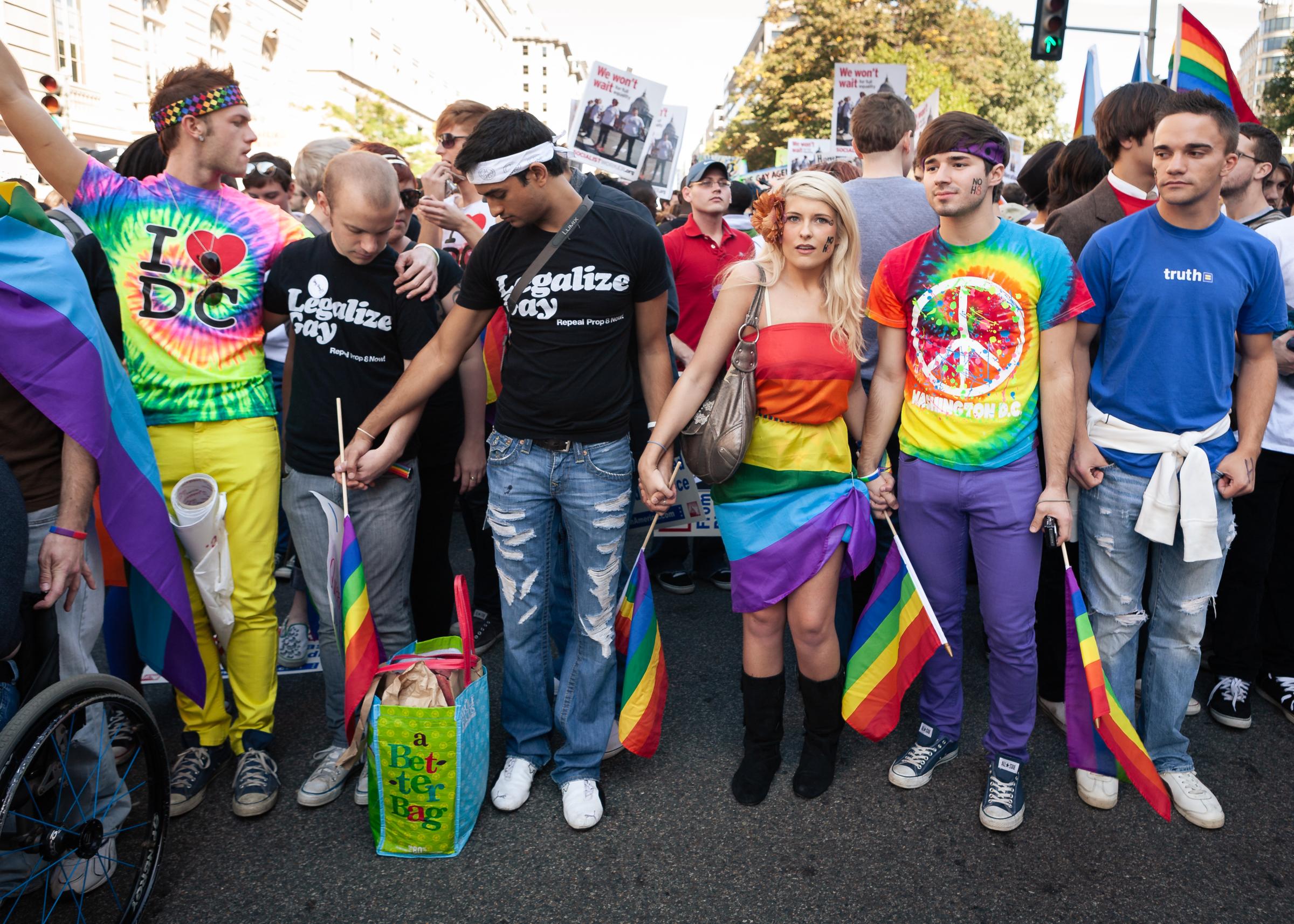 Erin Kelly, Cameron Tolle, Vineet Sathe, Blake Jelley and others band together at the front of the National Equality March in Washington DC on October 11, 2009. LGBT leaders organized the March to draw in young activists and shift the focus to a more hands on federally centered activism. 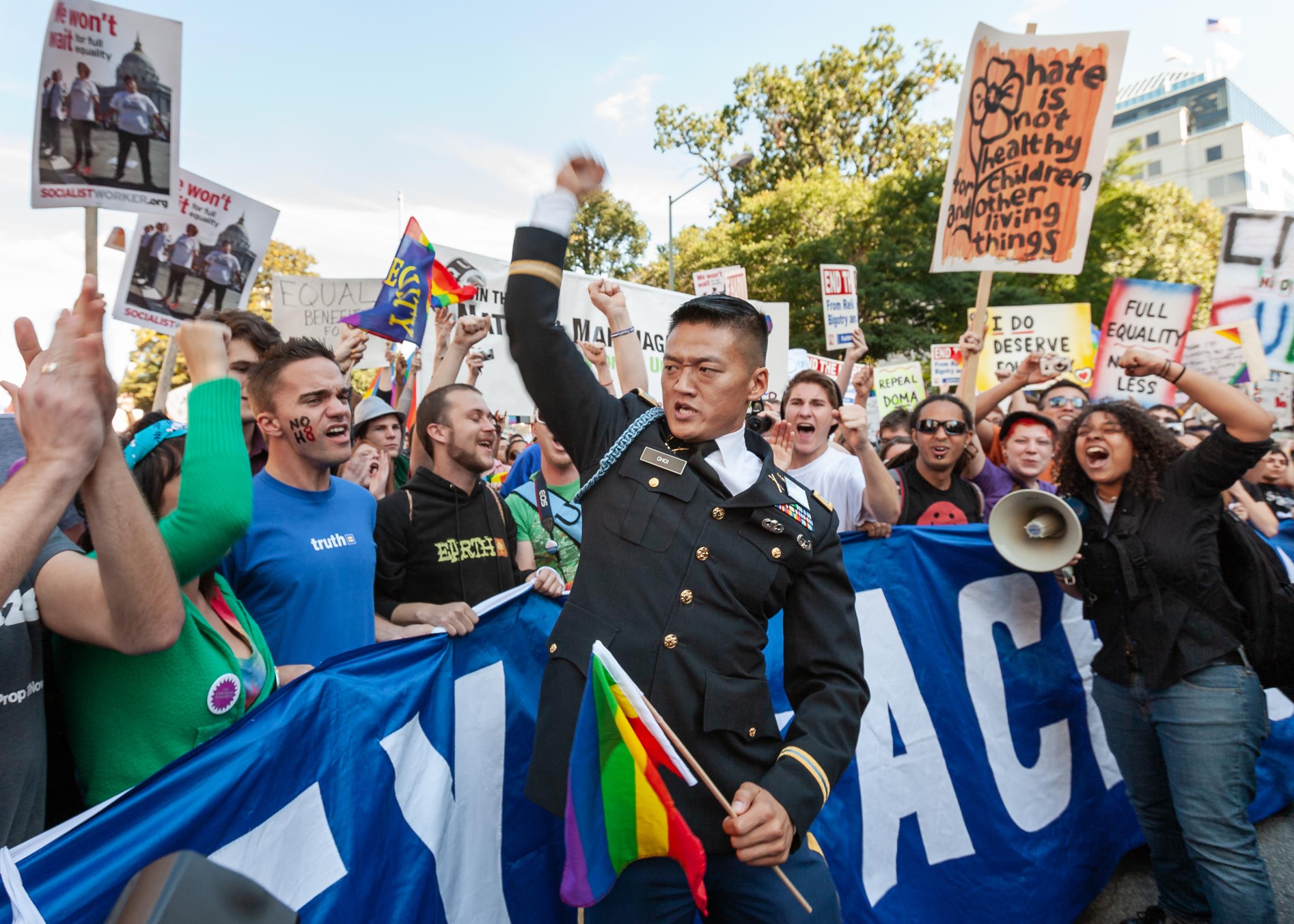 Dan Choi rallies the crowd at the front of the National Equality March. October 11, 2009 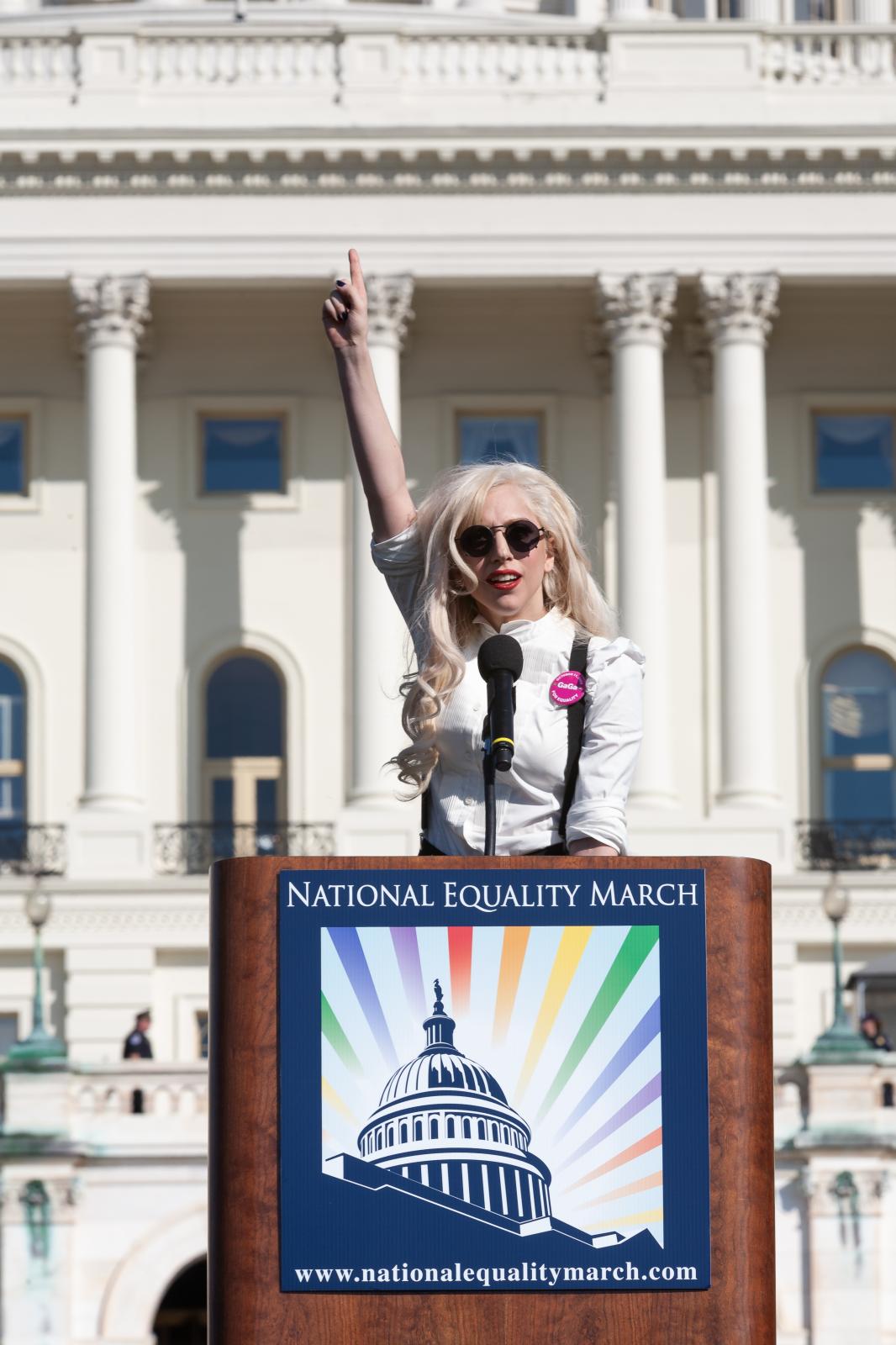 Lady Gaga addresses the crowd in front of the Capital at the National Equality March. October 11, 2009 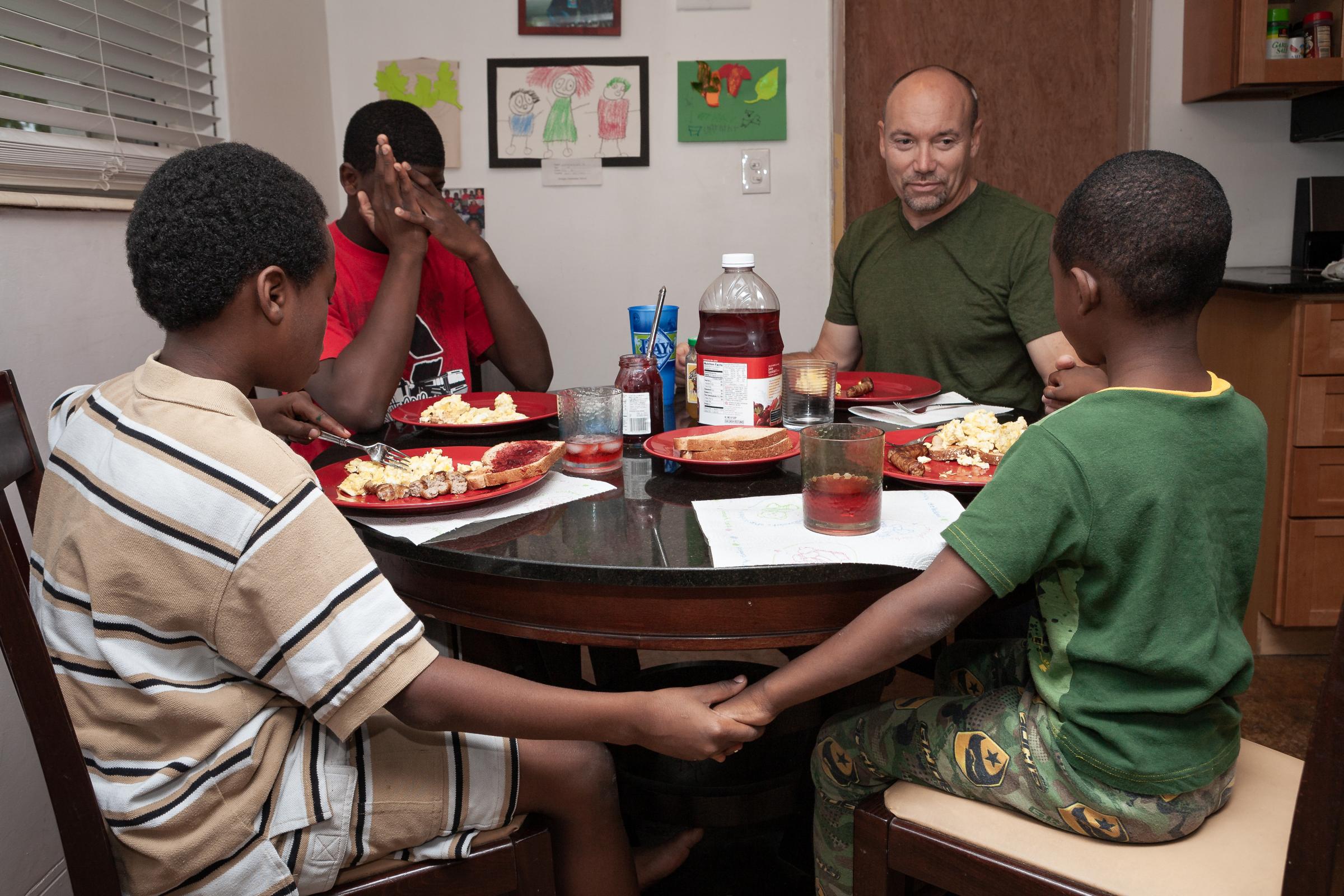 Martin Gill and his partner had been raising two foster children of the State of Florida since 2004. When they arrived, the infant and his four-year-old brother had clearly suffered from neglect. In 2006, a judge terminated the parental rights of the biological parents. Meanwhile, the children had thrived in their new home and bonded with their foster parents and their other brother (Gill’s partner’s biological son, who the two men were also raising). When the Department of Children’s Services told Gill and his partner that they would have to separate the brothers because the baby was adoptable, while the older child would probably stay in foster care, Gill knew they had to fight to not only keep the boys together, but keep their family together as well. By the time the legal fight was in motion the boys had many friends in their North Miami neighborhood, were doing well in school, and had developed relationships with the couple’s extended family, which includes two doting grandmothers. A psychologist who evaluated the boys recommended that it would be in the boys’ best interest to be adopted by Gill, testifying that it would be devastating for the boys to remove them from the home.  In 2010, the Florida District Court case, In re: Gill, ended Florida's 33-year ban on adoptions by homosexuals. 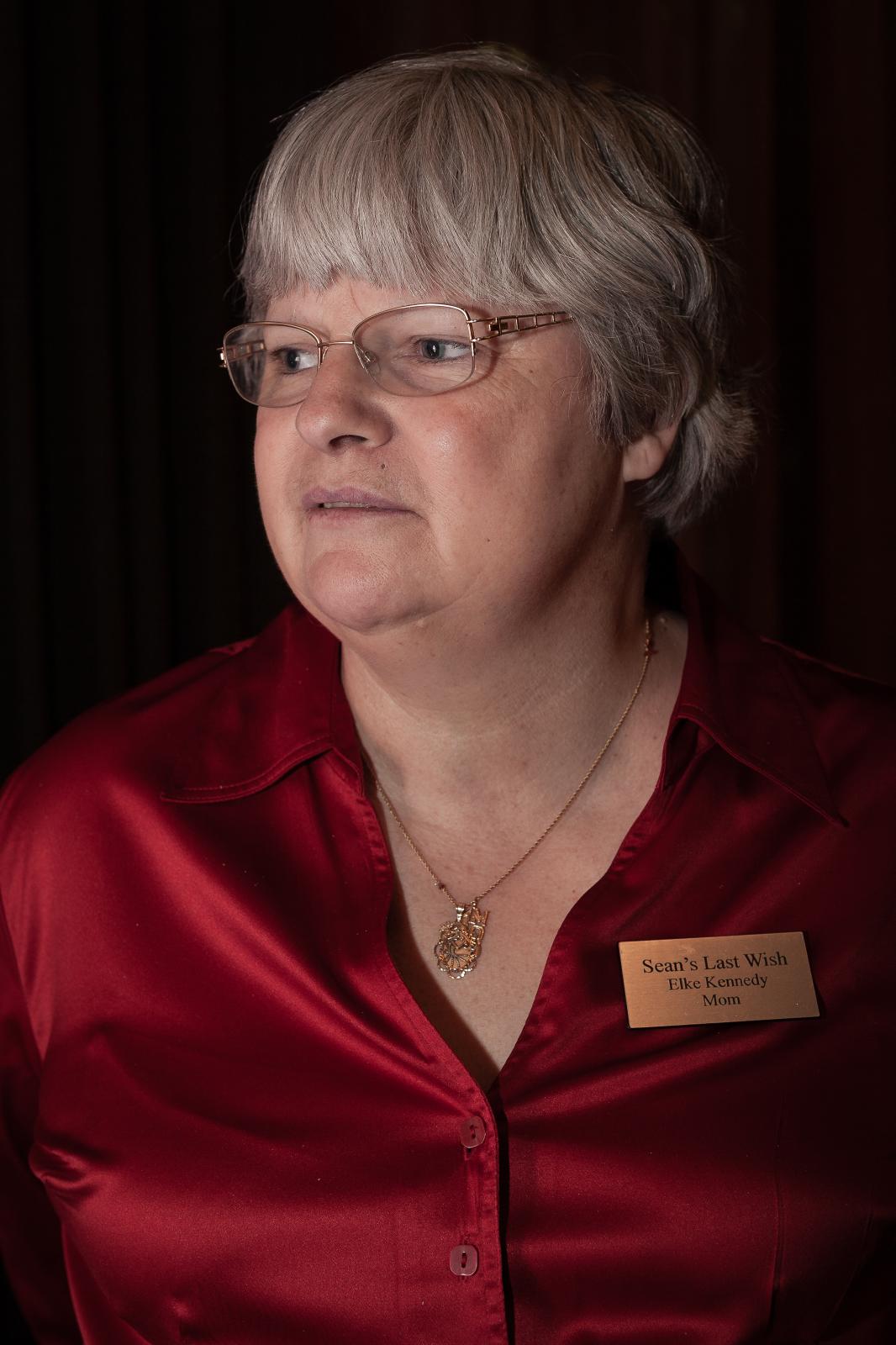 On May 16, 2007 Sean Kennedy (age 20) was approached upon exiting a South Carolina bar and punched so hard that his brain was separated from his brain stem.  Because of the lack of hate crime legislation at the time and South Carolina law, his murderer was convicted of manslaughter and served only 12 months in prison.  Sean’s mother Elke Kennedy started Sean’s Last Wish, a nonprofit organization, two weeks later. This organization is dedicated to empowering communities through non-violent conflict resolution and community involvement and works on several fronts to prevent bullying, and educate law enforcement officials and legal personnel regarding hate crimes.  Elke spent two years campaigning for the passage of federal hate crimes legislation; the Hate Crime Prevention Act was signed into law by President Barack Obama on October 28, 2009, with Elke in attendance 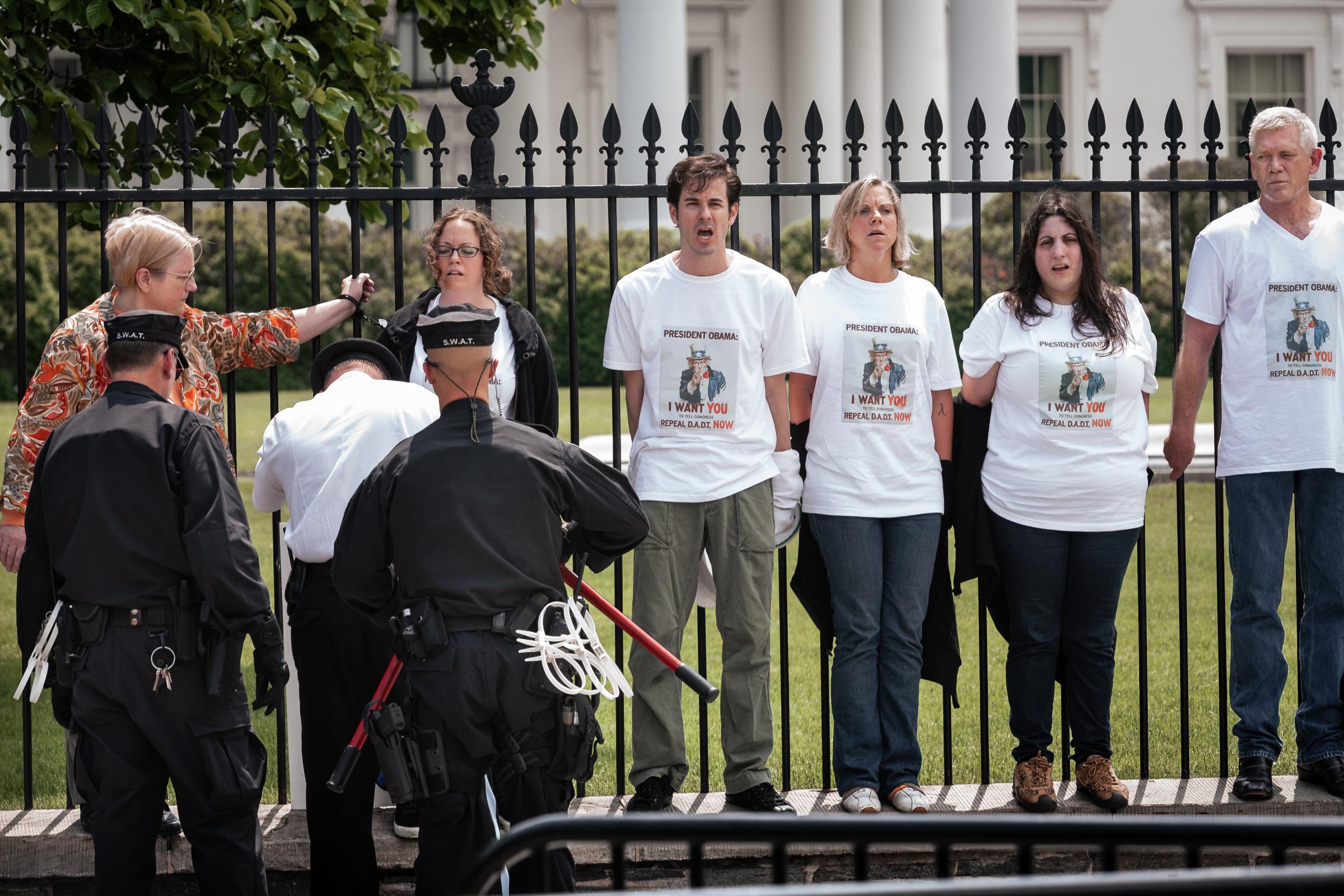 After a rally in Lafayette Park on May 2, 2010, protesters Alan Bounville, Nora Camp, Natasha Dillon, Iana Dibona, Mark Reed, and Anne Tischer handcuffed themselves to the White House fence in protest of the DADT policy and were arrested. 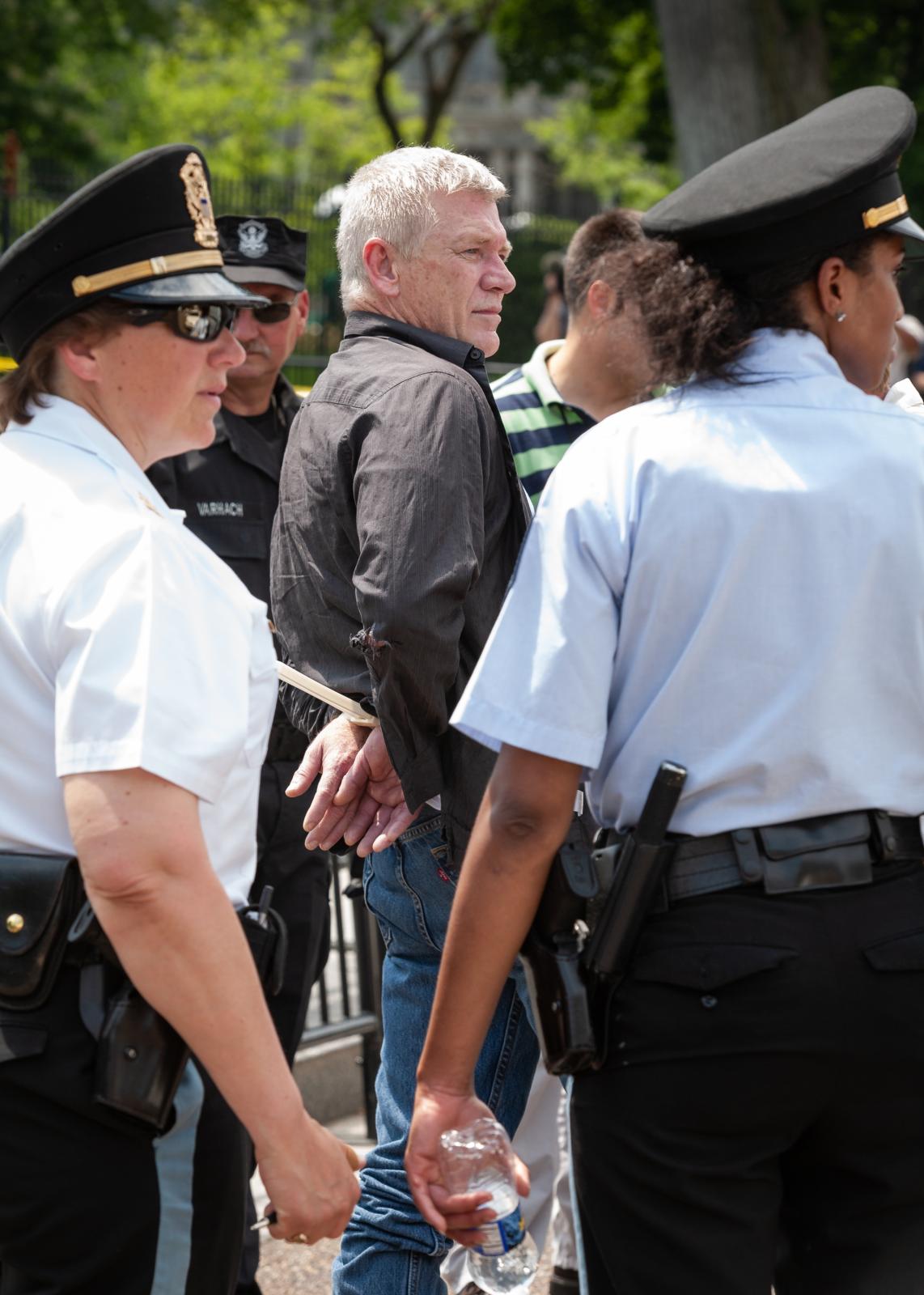 Mark Reed was arrested for handcuffing himself to the White House fence following a DADT protest.  A Get Equal board member, Reed and his partner were the first gay couple to get married in Texas during an e-wedding ceremony via skype with an officiator in Washington DC.  May 2, 2010 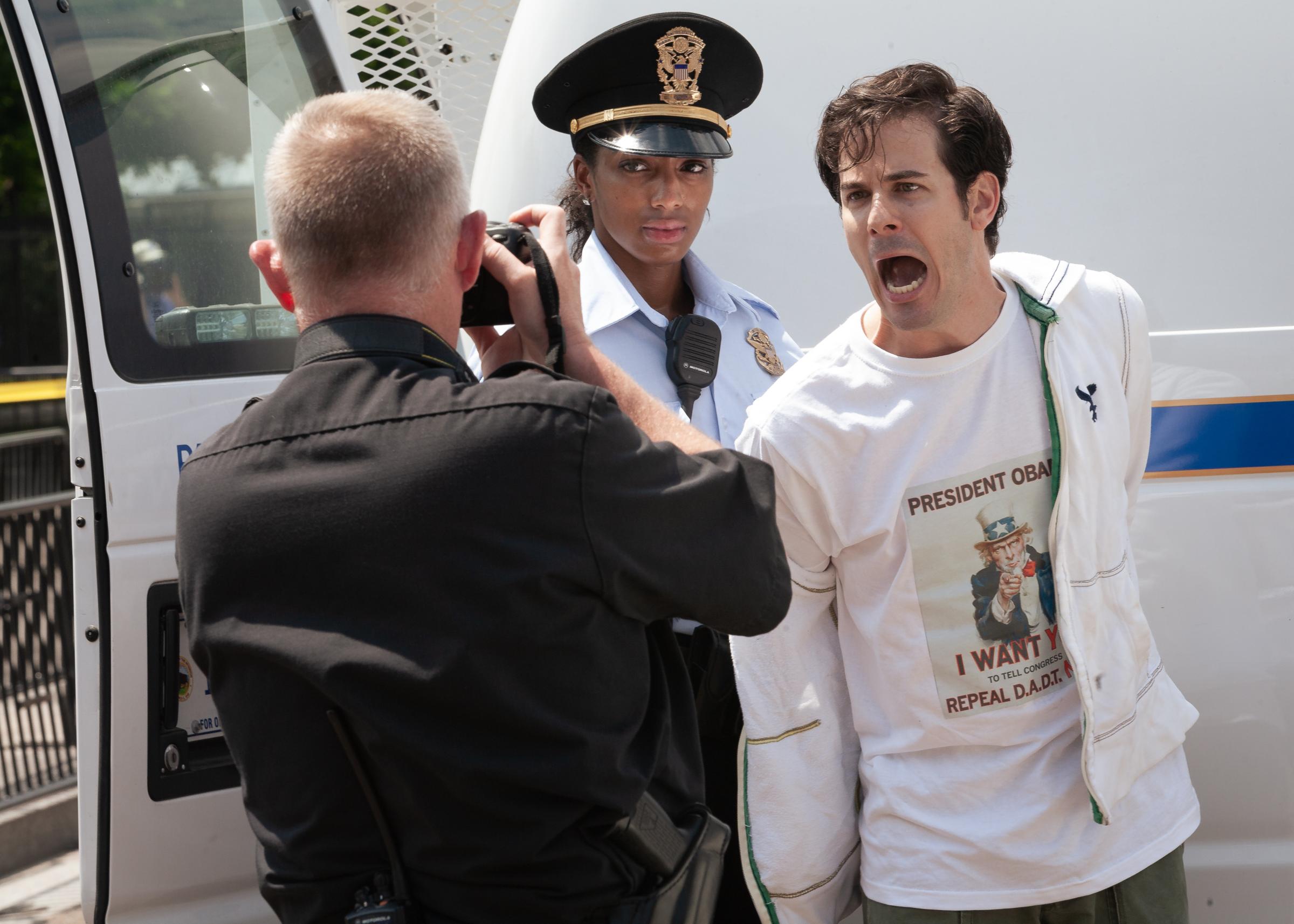 Alan Bounville was arrested for handcuffing himself to the White House fence in protest of the DADT policy. May 2, 2010 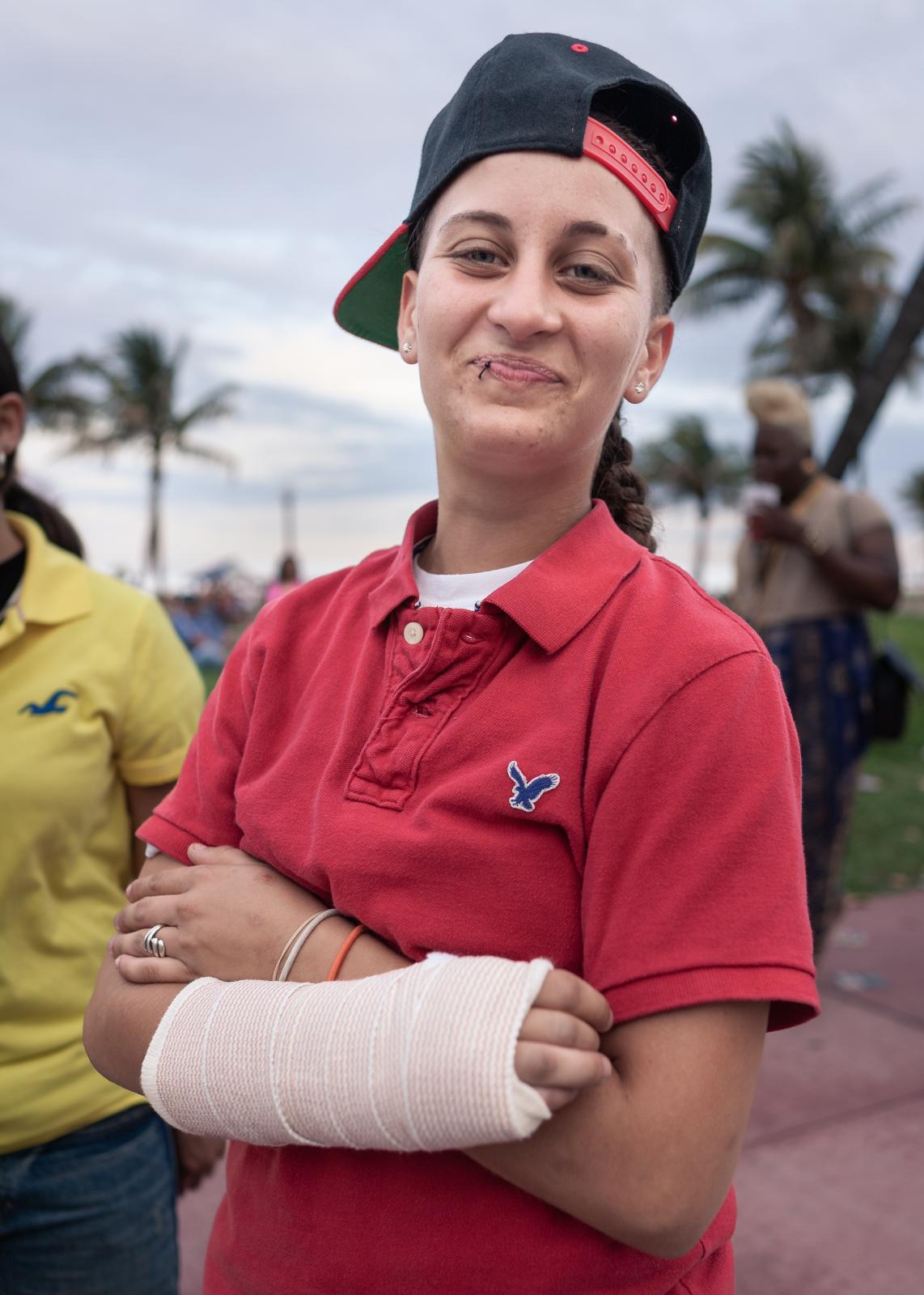 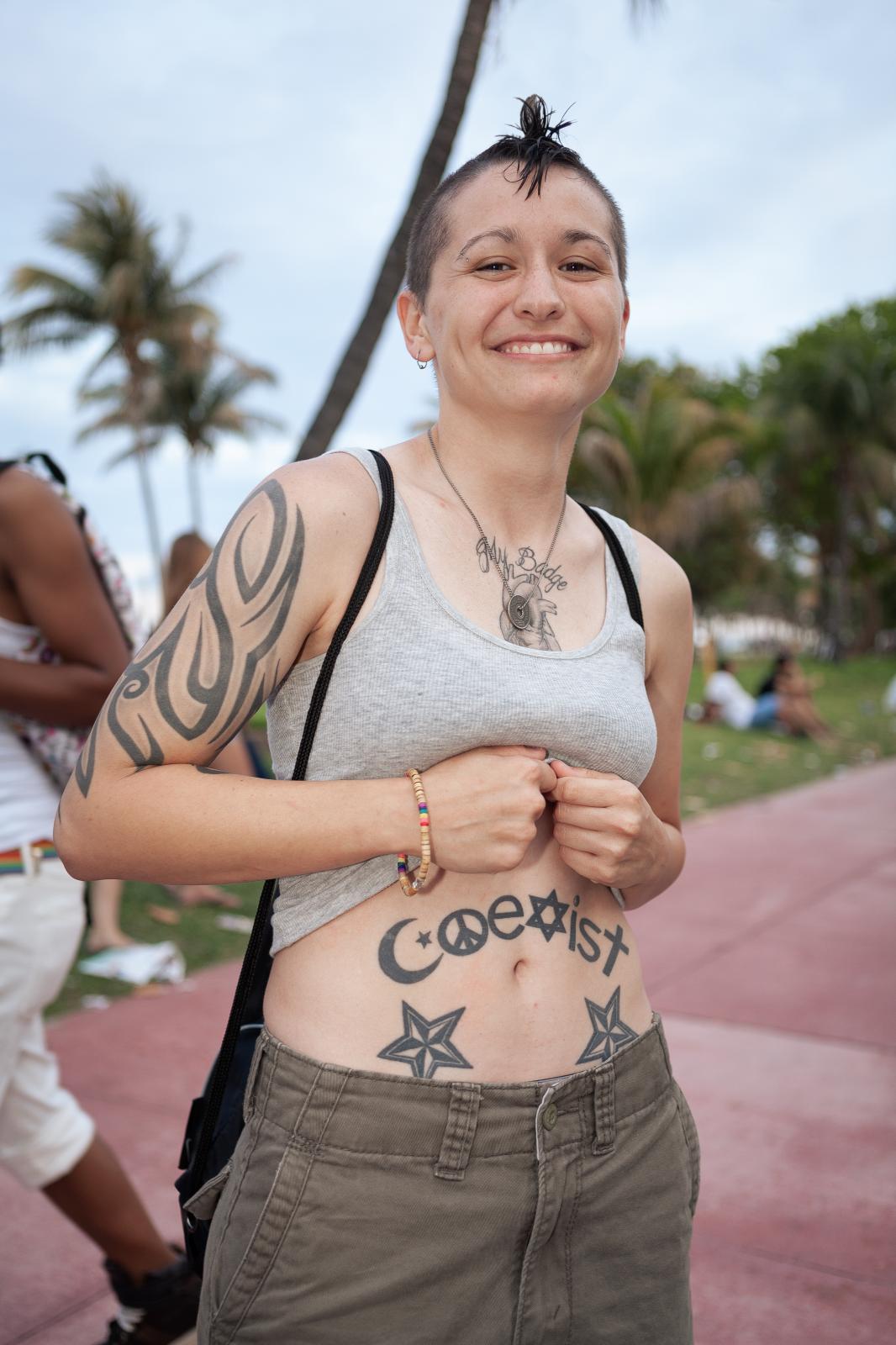 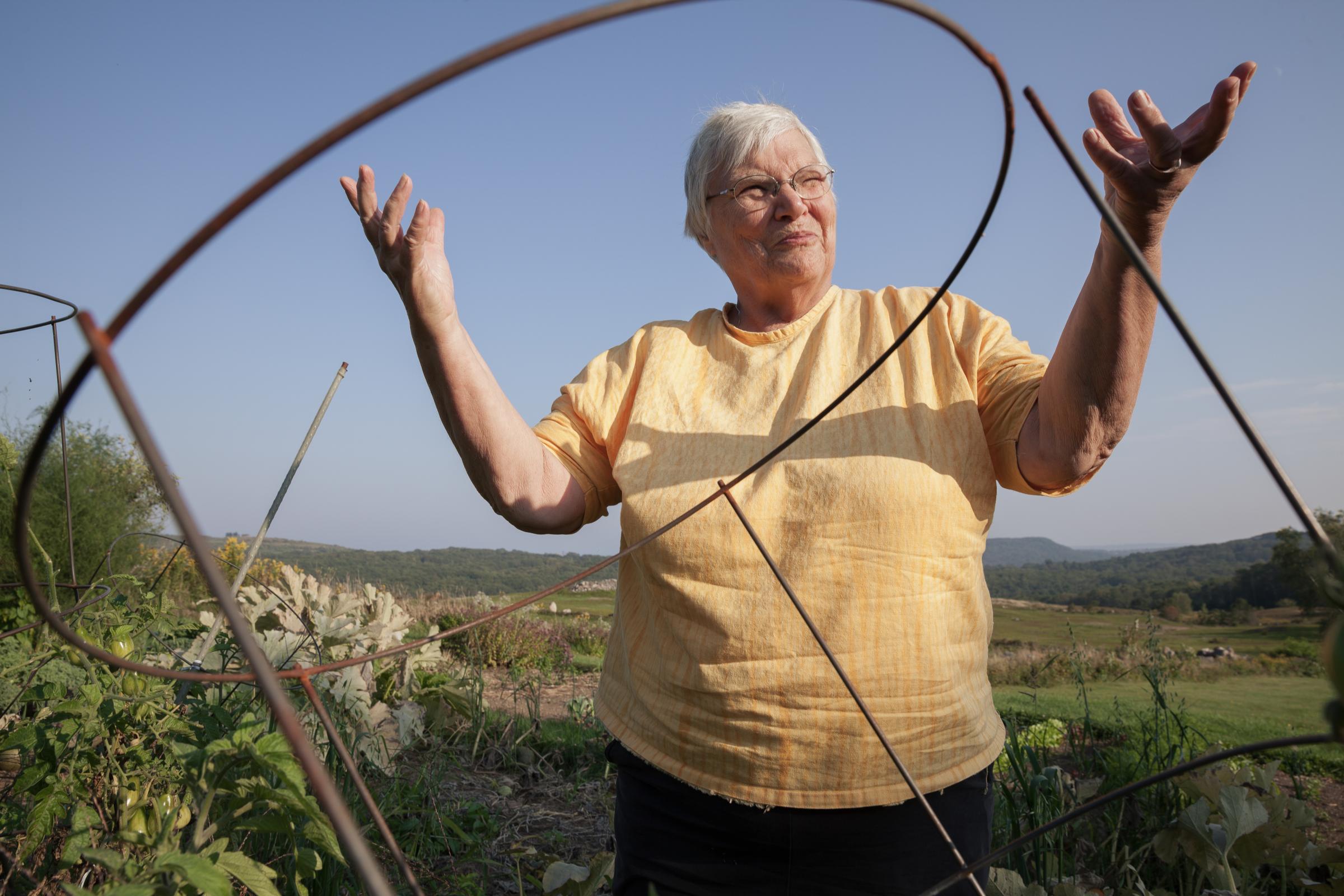 Luci Bauer, at the home she shares with her wife, in Rockport, Maine. Luci went door to door raising awareness of Maine's campaign to approve gay marriage on the ballot. Gay Marriage was approved by popular vote (53%) in November 2012. 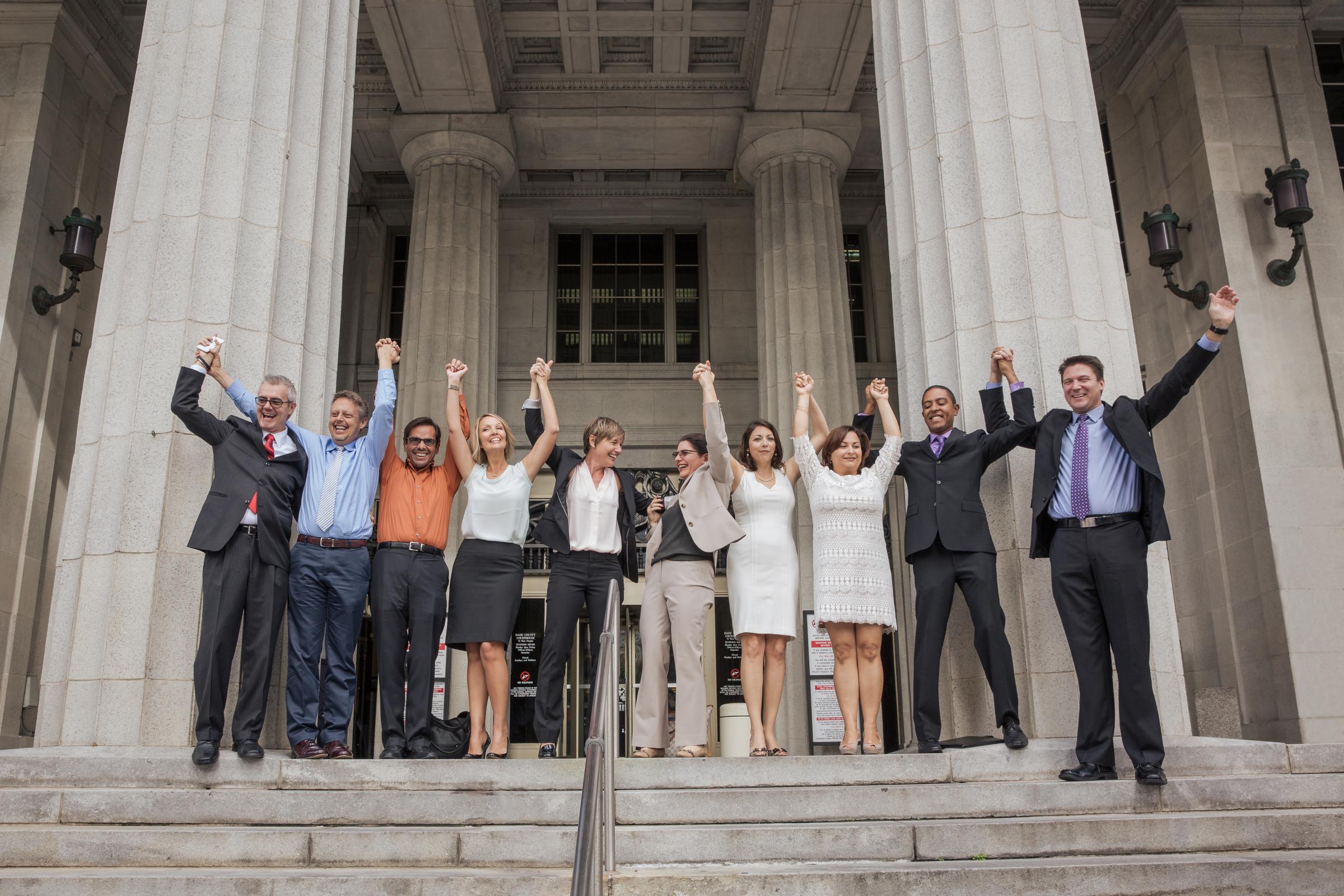 On January 5, 2015, a Miami-Dade judge nullified Florida's Amendment 2 that banned same sex unions and marriages and ordered all Florida county clerks to begin issuing marriage licenses to same sex couples. The plaintiffs are seen here just after the decision was issued. 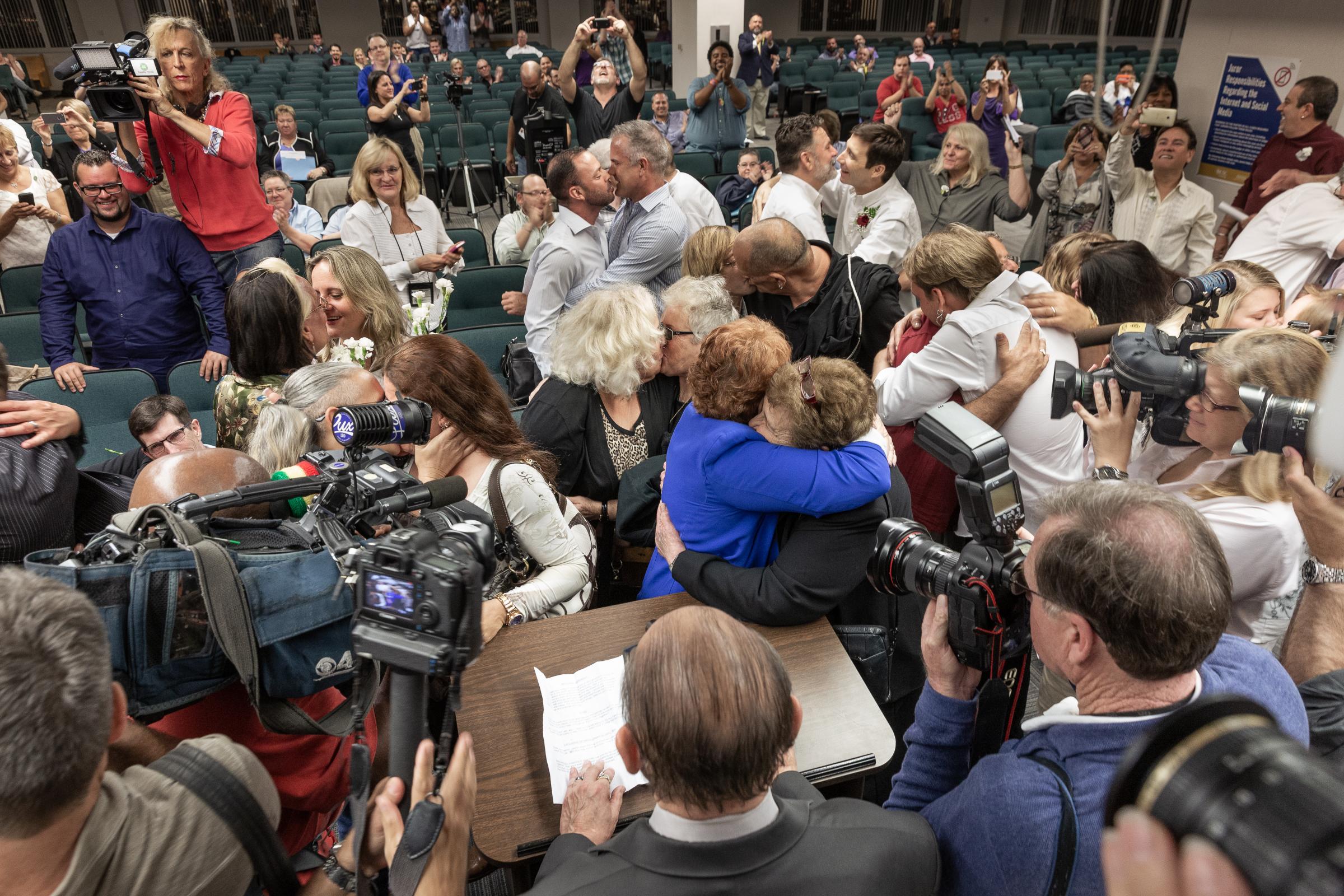 Eighty-six images from this project are in the permanent collection of the Smithsonian National Museum of American History. Freedom is a word and concept that has particular resonance for my family.  My great-grandparents fled the political turmoil of Spain for Cuba a century ago. Short decades later, there was a second family exodus when my parents, as teenagers, left Cuba after the revolution, in search of freedom and democratic values in the United States.

Born in the U.S., I am a citizen of the country where the quest for freedom was the catalyst for its creation, as well as the essence of the Bill of Rights and Constitution. Americans believe the freedom to love is part of our unalienable rights but for me, it is not. As a gay woman in America, I am denied the right to love. Discriminated against for loving a partner of the same sex, I cannot marry my partner, adopt a child with her, file taxes with her, or retain the legal right to visit her bedside should she fall ill. LGBT citizens are denied over 1,100 federal rights, and countless other state rights.  This battle for equality has been so bravely fought by the current (and so many lost) icons of the gay movement, and today the old warriors seek to pass on their dedication and passion to a new generation of leaders as the fight must go one until all citizens are treated equally under federal law.