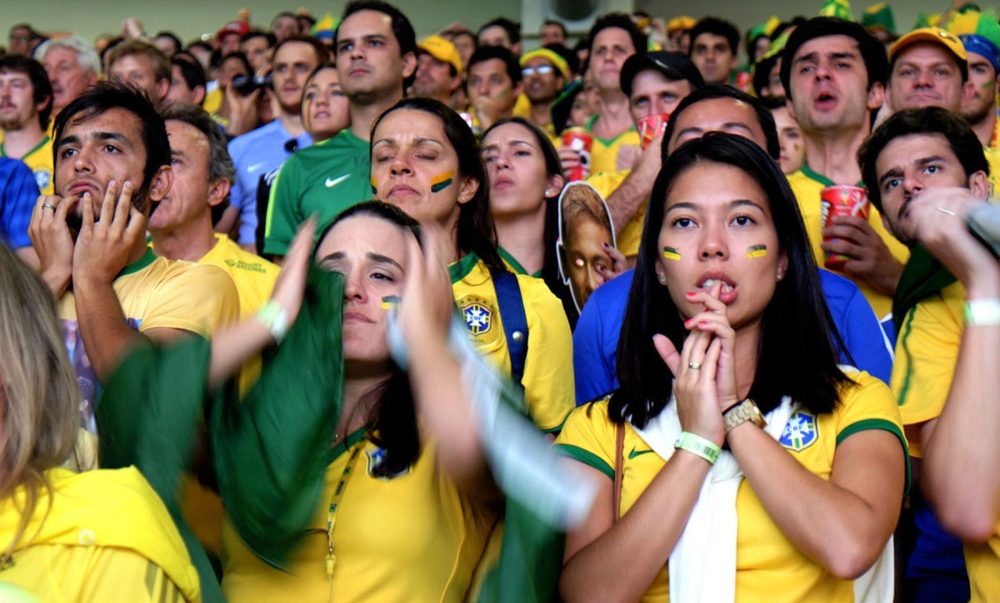 1 of 15 © 2021 Luiz C. Ribeiro
Brazilian fans reacts as the Brazillian national team collapses in front of the German national team in the Mineirão Stadium in Belo Horizonte, Brazil. 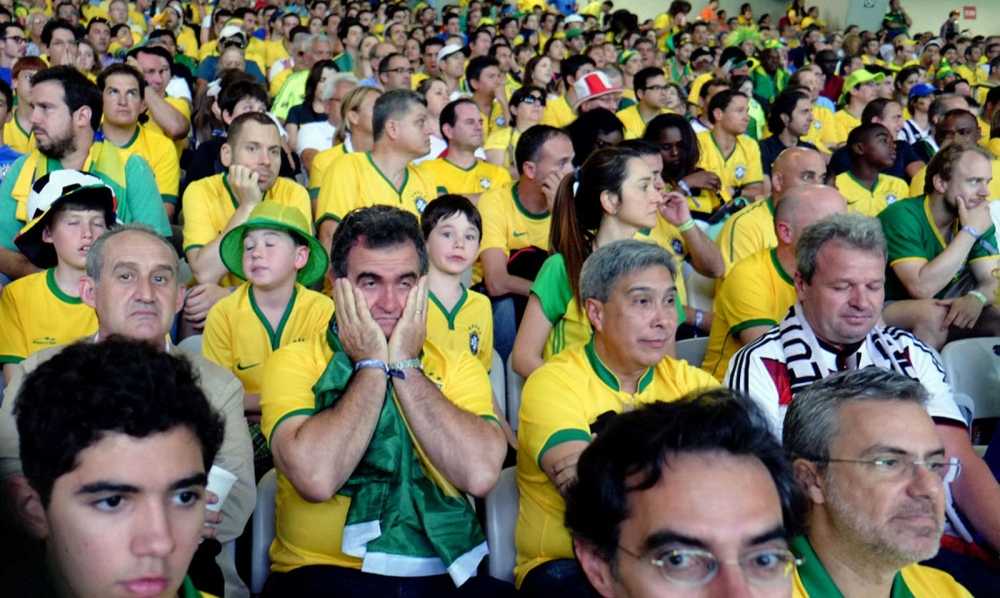 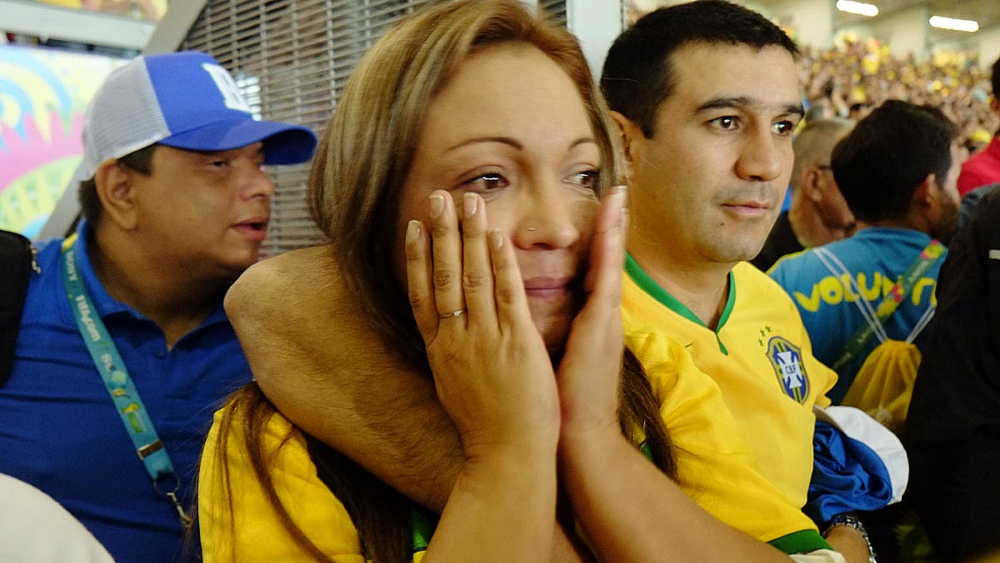 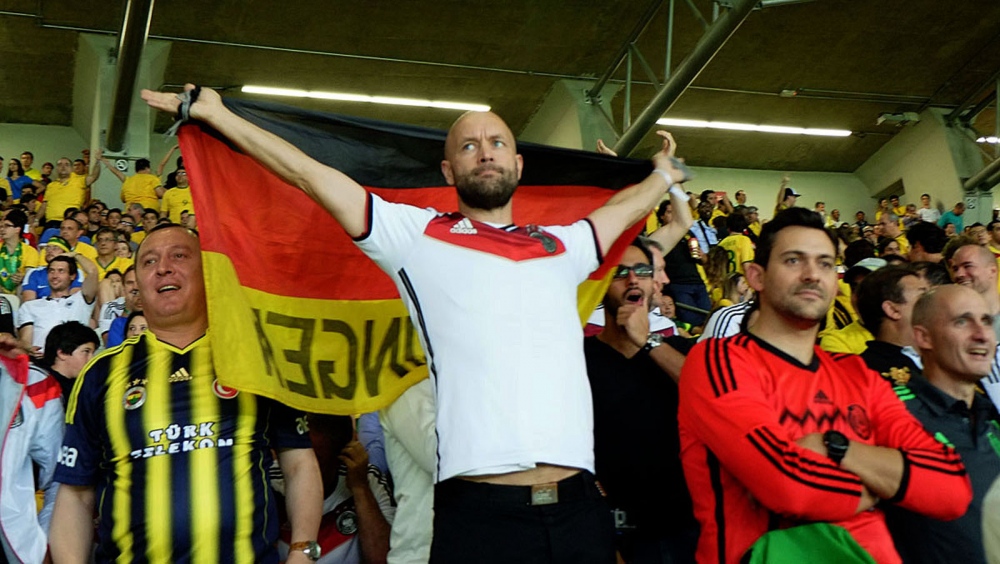 4 of 15 © 2021 Luiz C. Ribeiro
An unidentified German celebrates. The Brazil vs Germany football match that took place on 8 July 2014 at the Estádio Mineirão in Belo Horizonte, Brazil, was the first semi-final match of the 2014 FIFA World Cup. 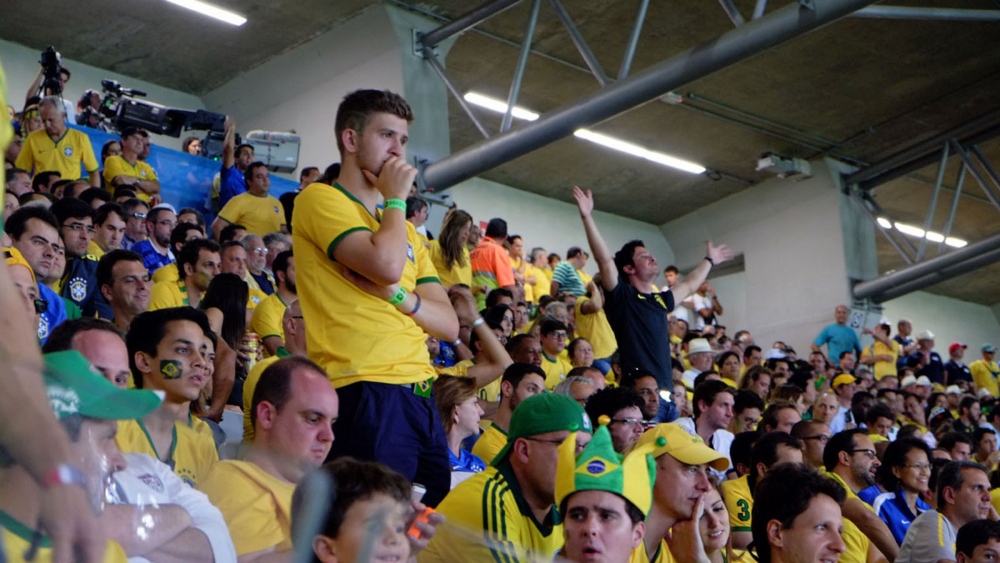 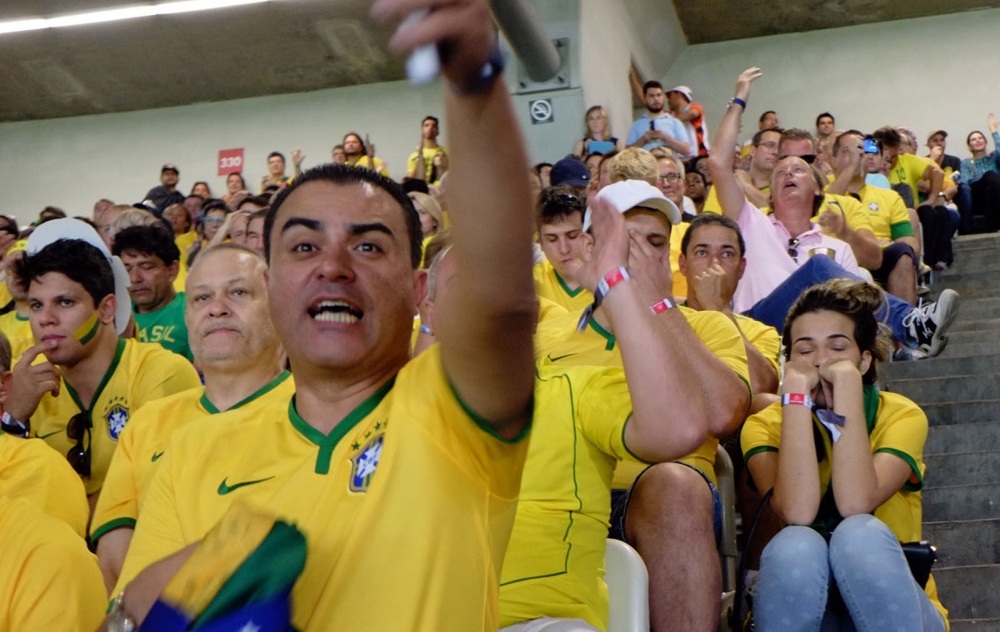 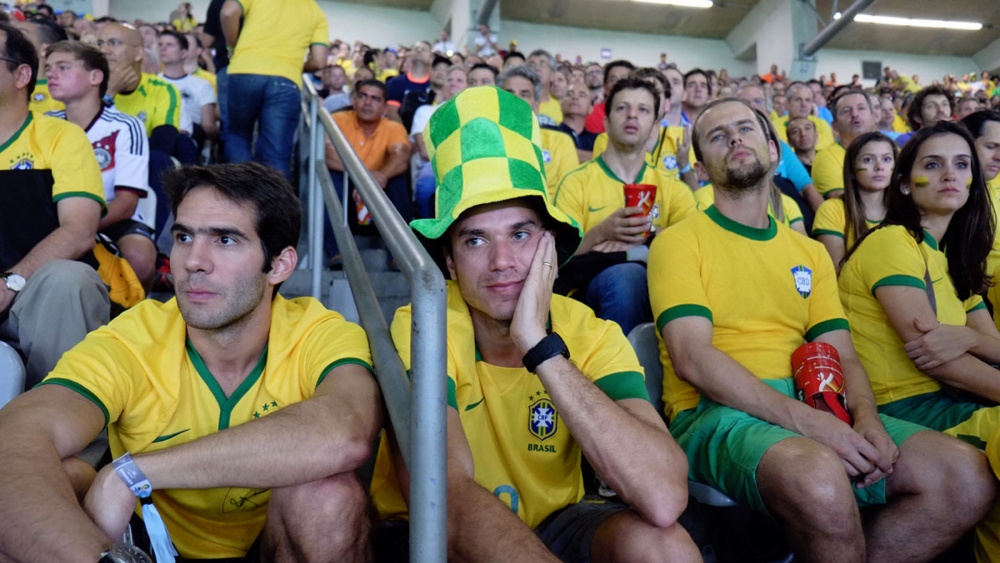 7 of 15 © 2021 Luiz C. Ribeiro
Brazil's loss broke their 62-match home unbeaten streak in competitive matches going back to 1975, when they lost 1–3 to Peru in that year's Copa América, and equalled their biggest margin of defeat, a 6–0 loss to Uruguay in 1920, causing the match to be described as a national humiliation. 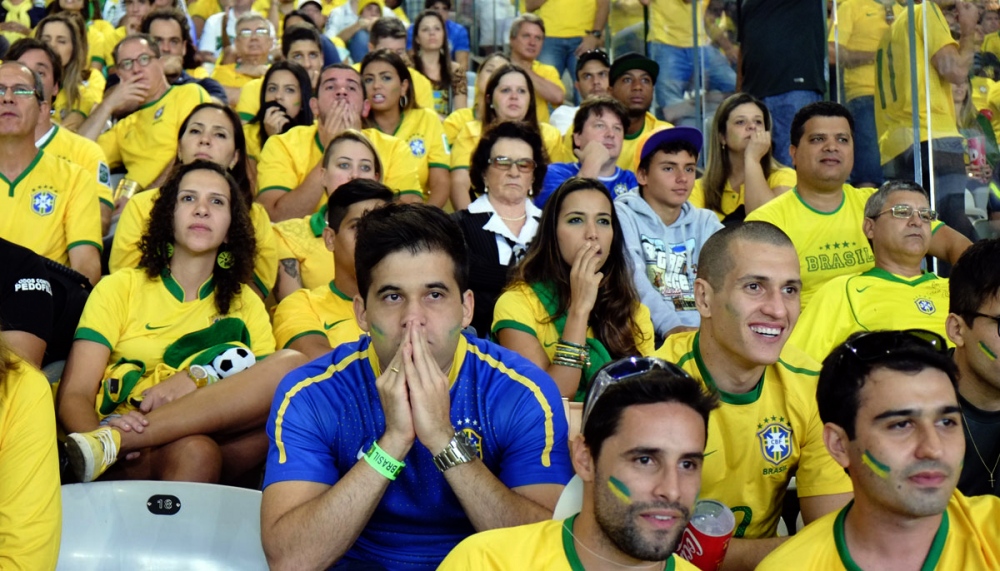 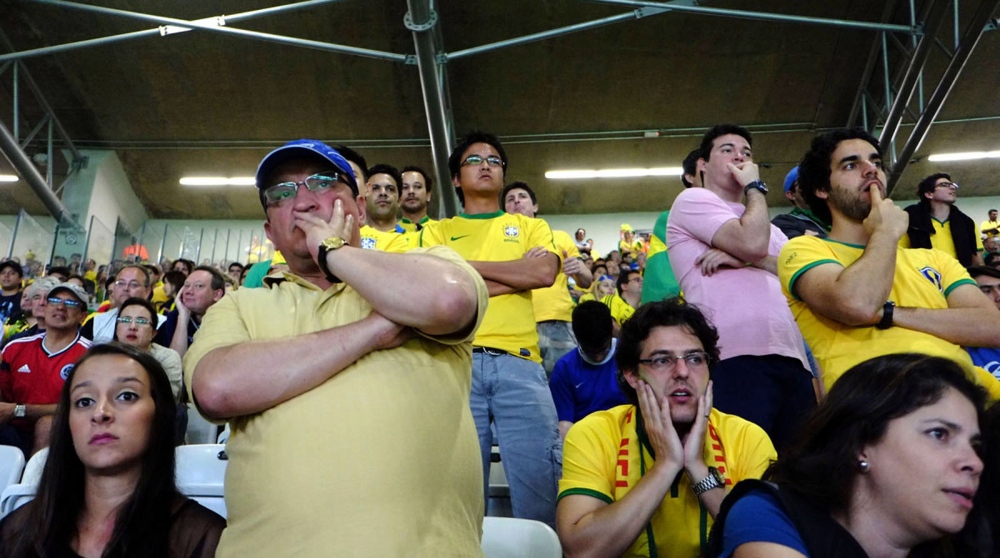 9 of 15 © 2021 Luiz C. Ribeiro
Brazilians on the stadium can not believe what is happening on the field below. 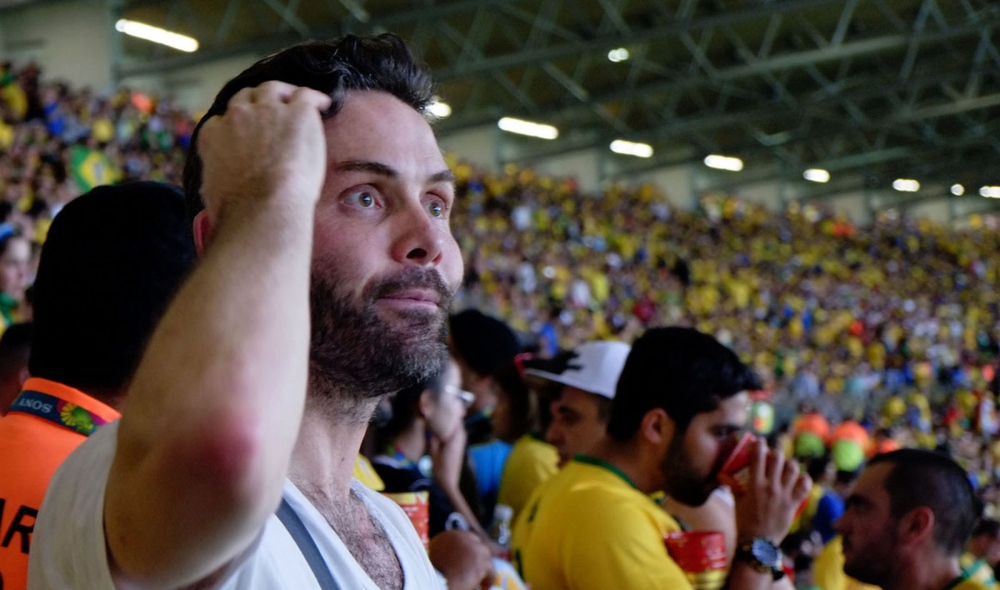 10 of 15 © 2021 Luiz C. Ribeiro
An unidentified Brazilian fan scratches his head in disbelieve of what is happening on the field below. 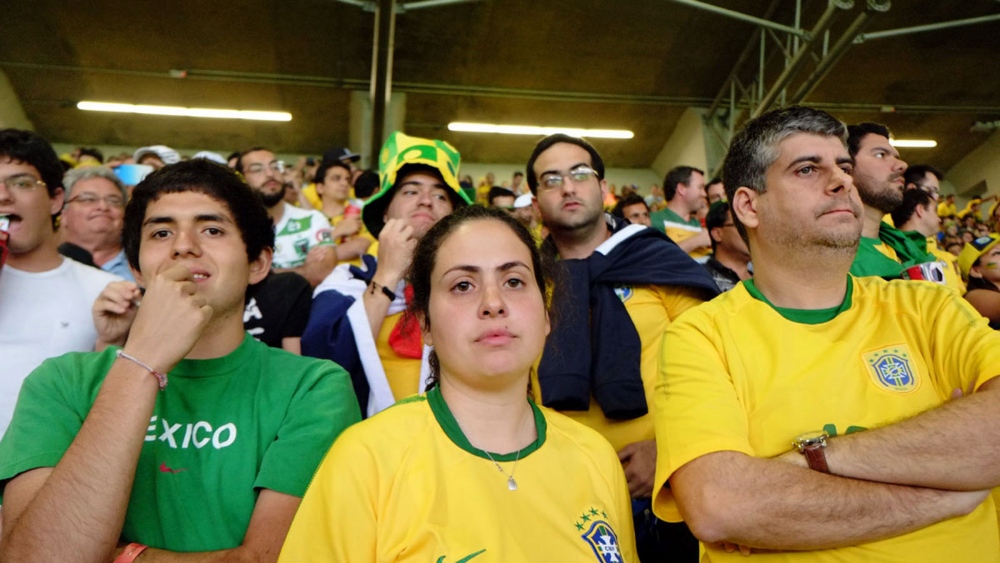 Brazil scored a goal at the last minute, ending the match 7–1. 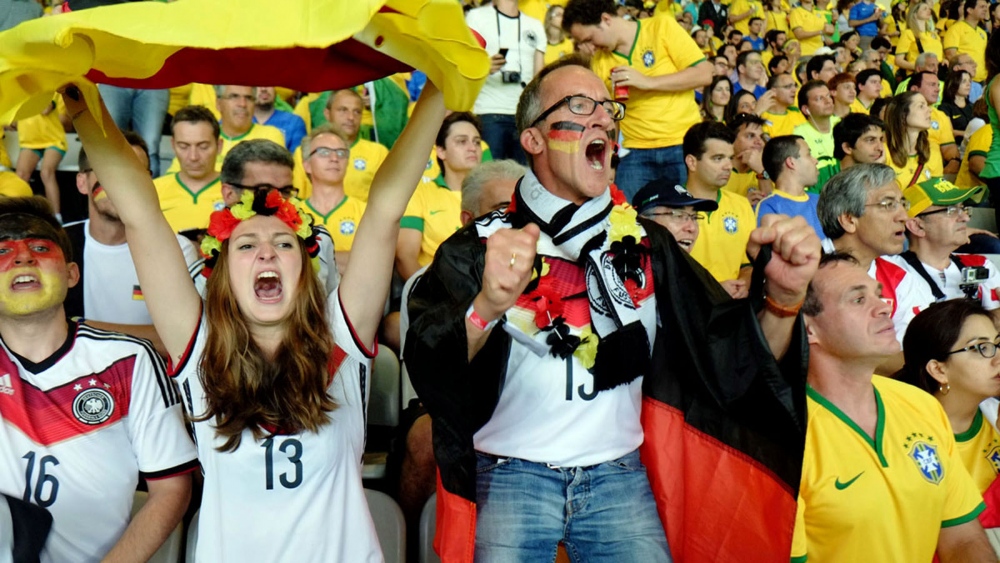 12 of 15 © 2021 Luiz C. Ribeiro
Germans celebrate another goal. The game was subsequently referred to by the Brazilian media as the Mineirazo, evoking the spirit of national shame brought by the Maracanazo in which Brazil unexpectedly lost the 1950 FIFA World Cup on home soil to Uruguay. 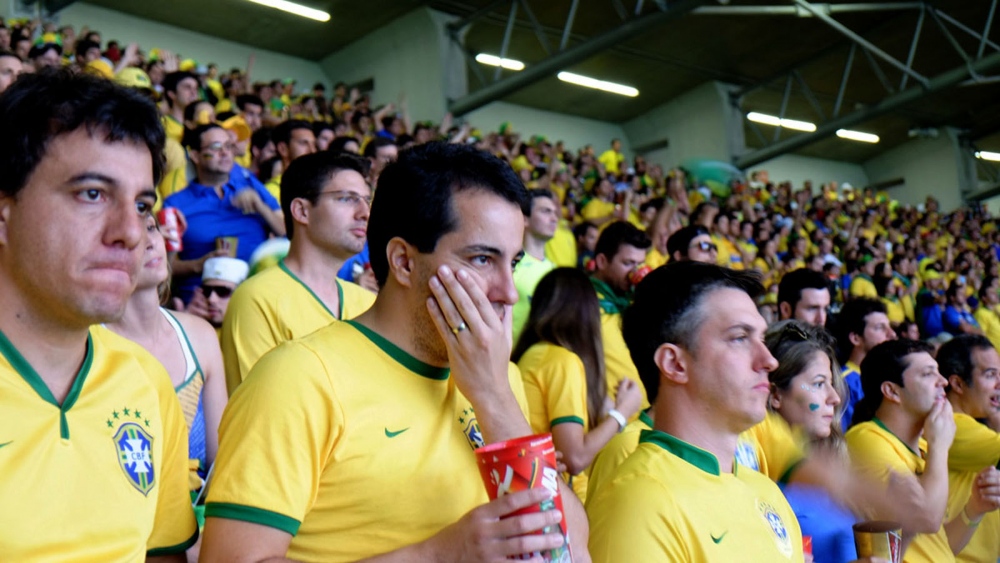 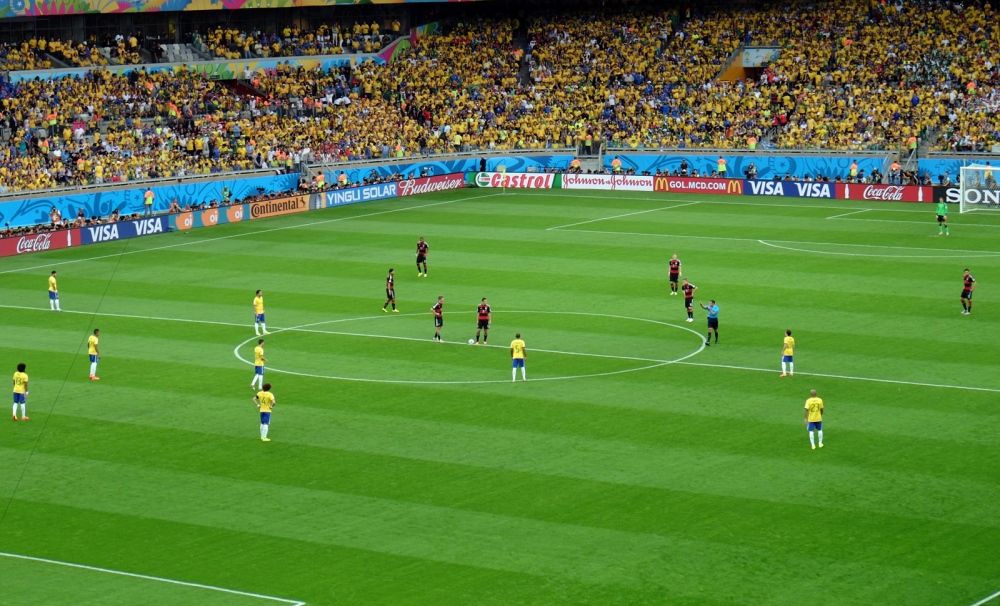 14 of 15 © 2021 Luiz C. Ribeiro
The Brazil vs Germany football match that took place on 8 July 2014 at the Estádio Mineirão in Belo Horizonte, Brazil, was the first semi-final match of the 2014 FIFA World Cup. 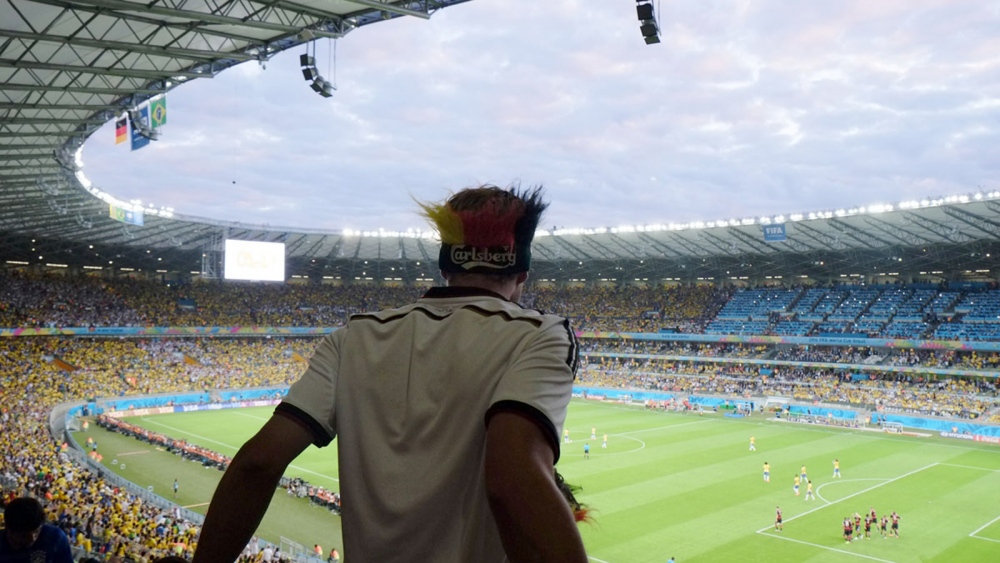 The Brazil vs Germany football match that took place on 8 July 2014 at the Estádio Mineirão in Belo Horizonte, Brazil, was the first semi-final match of the 2014 FIFA World Cup.

Both Brazil and Germany reached the semifinals with an undefeated record in the competition, with the Brazilians' quarterfinals with Colombia causing them to lose striker Neymar to injury, and defender and captain Thiago Silva to an accumulation of yellow cards. Despite the absences, a close match was expected, given both teams were traditional FIFA World Cup forces, sharing eight tournaments won and having previously met in the 2002 FIFA World Cup Final, where Brazil won 2–0 and earned their fifth title. This match, however, ended in a stunning loss for Brazil; Germany led 5–0 at half time, with four goals scored within six minutes, and subsequently brought the score up to 7–0 in the second half. Brazil scored a goal in the last minute, ending the match 7–1, these images shows the Brazilian fans reaction during the game.

By luiz c. ribeiro / Palmas, Brazil, Tocantins State — Indigenous populations are the truly guardians of our environment, without their knowledge and protection..
Oct 8, 2020

By Luiz C. Ribeiro — Photojournalism  is a particular form of journalism complying with a rigid ethical framework..
Oct 8, 2020

By Luiz C. Ribeiro — Architectural photography  is the photographing of buildings and similar structures that are both..
Jan 30, 2020

By Luiz C. Ribeiro — Travel photography  is a subcategory of photography involving the documentation of an area's..
Mar 28, 2019

By Luiz C. Ribeiro — Graffiti  are writing or drawings that have been scribbled, scratched, or painted illicitly on a wall..
Jan 28, 2019

By Luiz C. Ribeiro — An  environmental portrait  is a portrait executed in the subject's usual environment,..
Jan 16, 2019

By Luiz C. Ribeiro — The  Netherlands  is the main constituent country  of the  Kingdom of the Netherlands ...
Nov 3, 2018

By Luiz C. Ribeiro — Entertainment  is a form of activity that holds the attention and interest of..
May 28, 2018

By Luiz C. Ribeiro — Sports  are all forms of usually competitive physical..
Jan 3, 2018