Photographer
rasmusdegnbol.visura.co
Europes new borders.
Follow Hire
Profile
Stories (3)
News (3)
Location: Copenhagen
Nationality: Denmark
Biography:     Rasmus is a freelance photographer based in Copenhagen, Denmark. His work often balances on the edge of whats technological possible. “We have to explore all these new tools to tell our stories in new ways, but at the same time stay... read on
Focus: Photographer, Photojournalist, Filmmaker, Videographer
Skills: Photojournalism 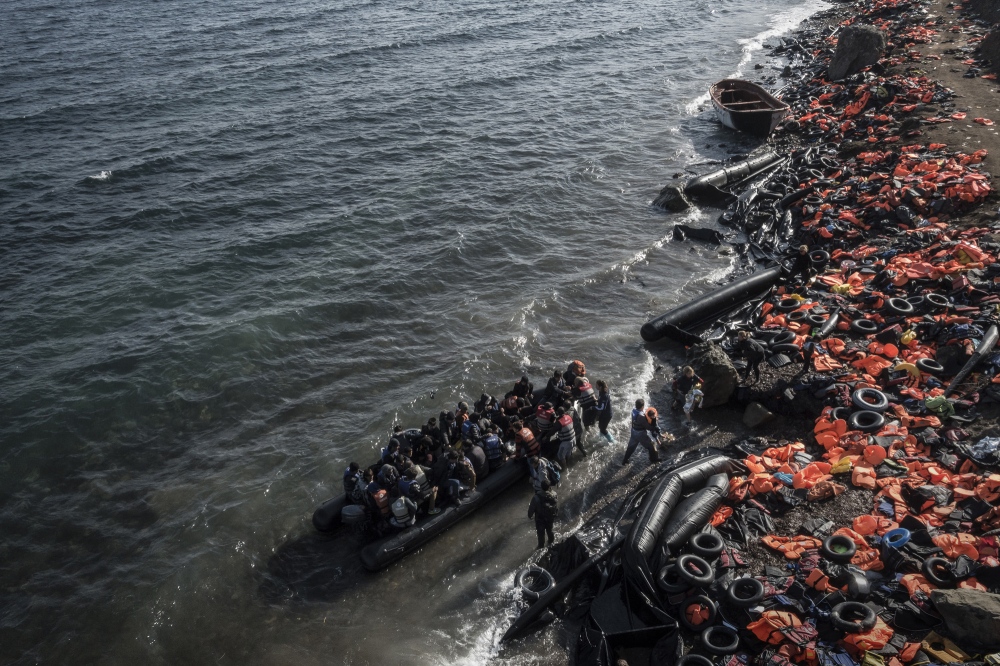 1 of 19 © 2020 Rasmus Degnbol
A small rubber dinghy filled with refugees and migrants arrives on the coast of Greek island Lesbos on the 30th October 2015. The island og Lesvos have seen hundreds of thousands of migrants and refugees arrive from Turkey in 2015. 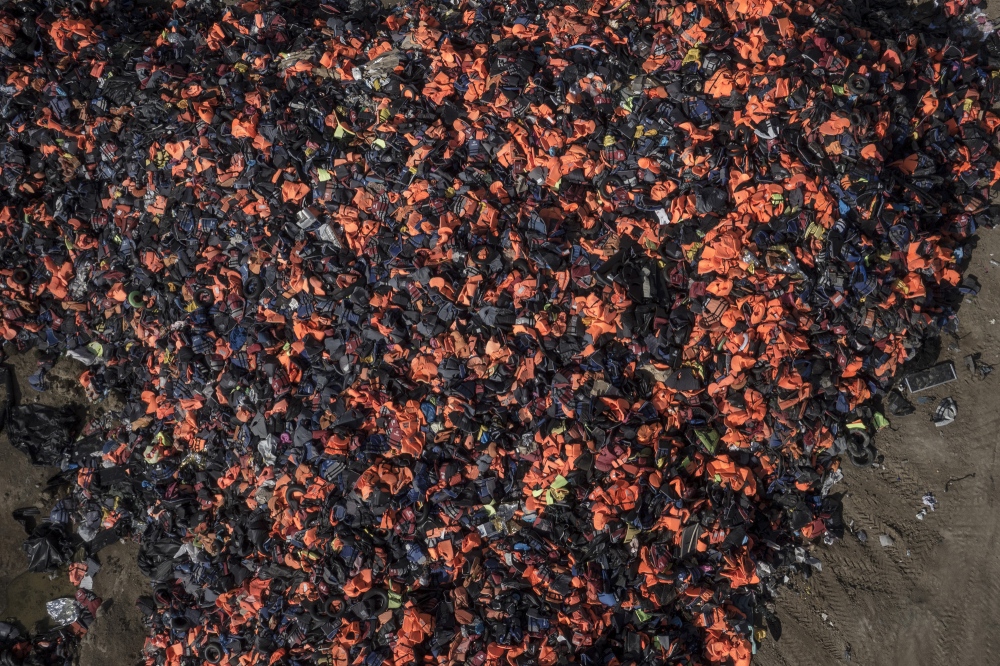 2 of 19 © 2020 Rasmus Degnbol
Over 100.000 lifevests and rubberboats lie in a almost 10 meter high pile on the island of Lesbos, Greece on the 31th October 2015. In 2015 Greece received well over 800.000 refugees and migrants. All primarily arriving with boat over the Aegean ocean from Turkey. The local island struggled to cope with the influx on its shores. 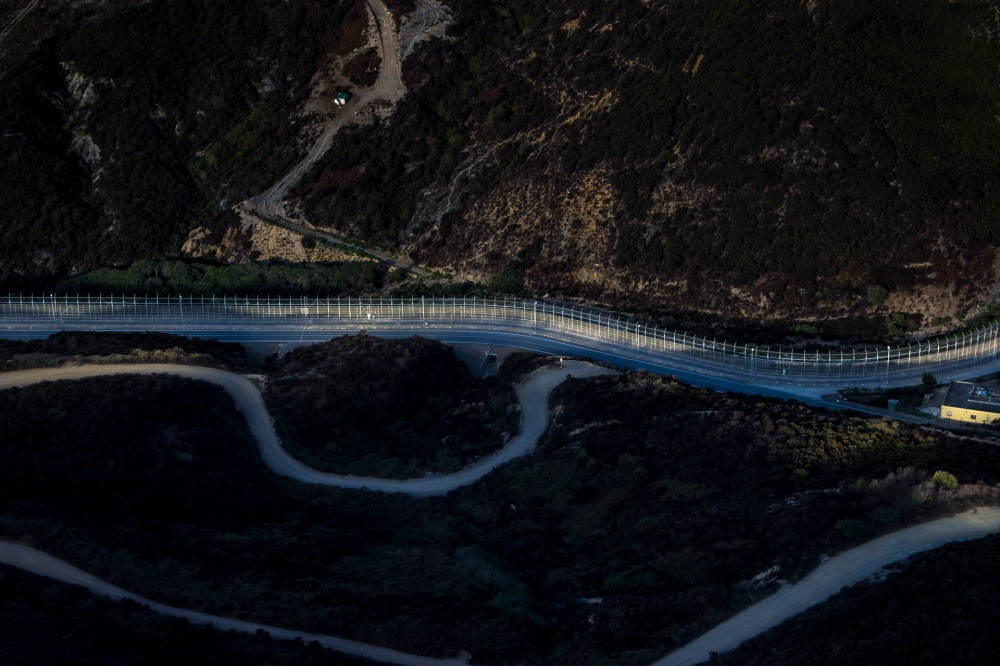 3 of 19 © 2020 Rasmus Degnbol
The borderfence in Ceuta, Spain early morning 7. September 2016. The fence is a 6 meter high parallel fence towards Morocco keeping sub-Saharan migrants and refugees out. The fence has barbed wire, watchposts, sound sensors, motion sensors, lights, cameras, patrolling guards on foot, in cars, in the hills, at sea in boats. It was first built in 1993, raised height in 1995 and again in 2005 to what it is today.

Its is the ground zero of European Border control. 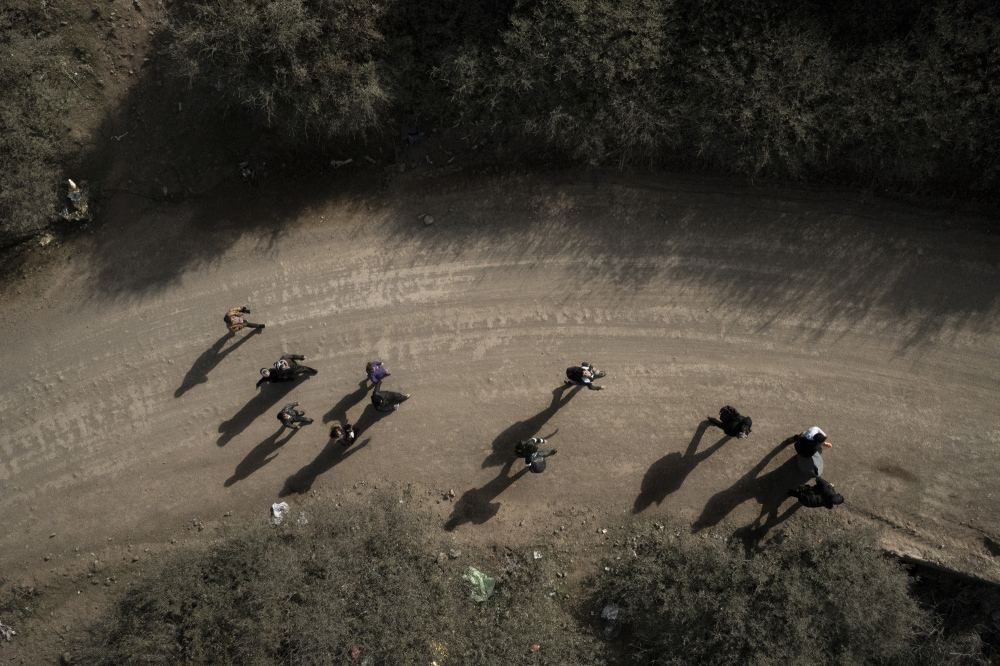 4 of 19 © 2020 Rasmus Degnbol
A group of Syrian refugees from Aleppo walks on the dirty track along the beach on Lesbos. The refugees have just arrived with boat from Turkey on the 31th October 2015. 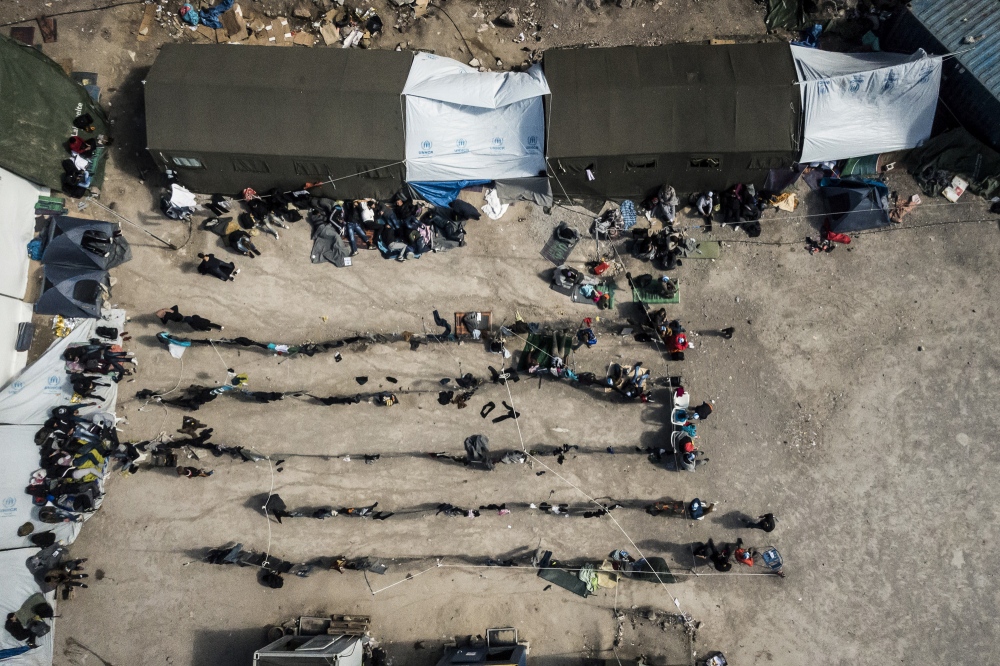 5 of 19 © 2020 Rasmus Degnbol
Refugees and migrants rest at the private funded camp OXY outside the town Molyvos on Lesbos, Greece on the 1. November 2015. The island have received hundreds of thousands of migrants and refugees in 2015, but have received little official help, nor established a reception center on the north coast where most arrive. This private funded camp make sure the migrants doesn't have to walk the almost 60 km to the receptioncenter outside Mytilini city. 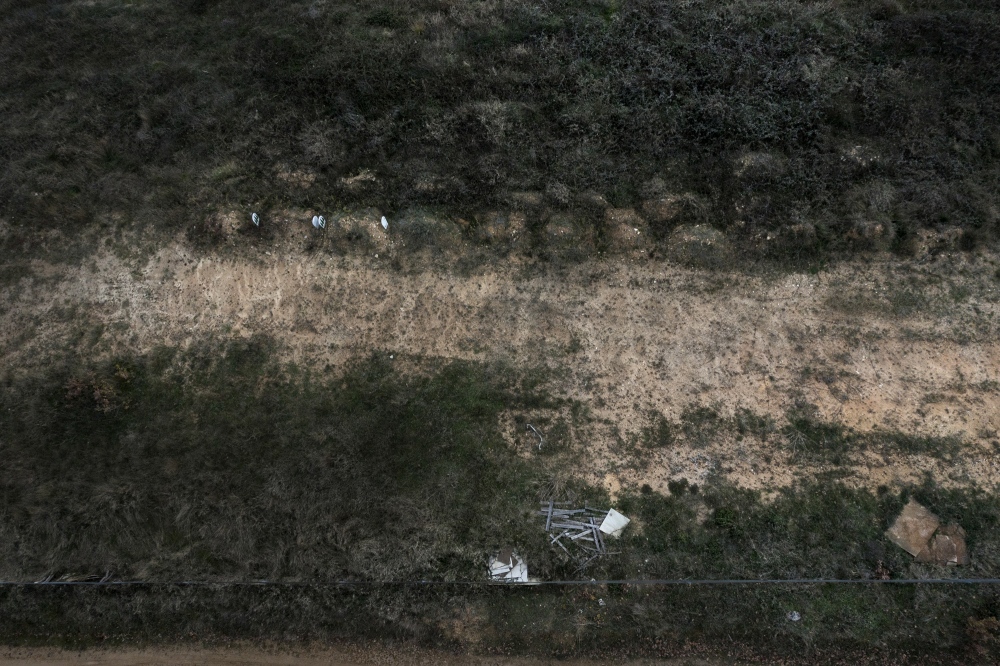 6 of 19 © 2020 Rasmus Degnbol
A refugee and migrant massgrave at the border between Greece and Turkey along the Evros River on the 4th December 2015. There are no official record of the bodies buried here, but estimates are 450. Most of the bodies are never identified, only two graves are marked with tombstones and names of two Syrian-Palestinian boys born in a refugee camp in Syria. The gravesite is unmarked and fenced. 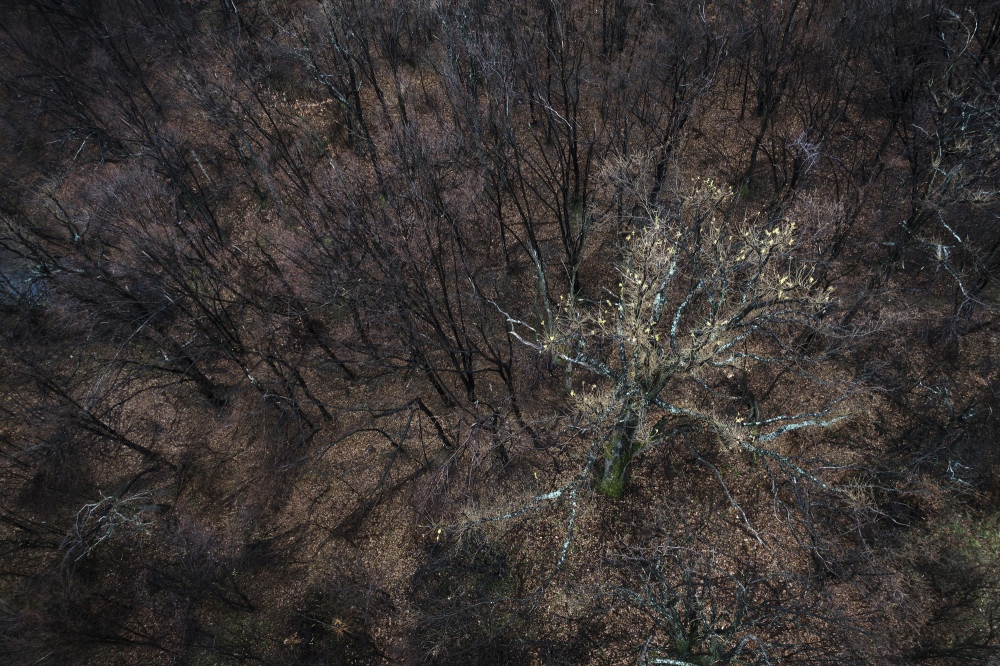 7 of 19 © 2020 Rasmus Degnbol
In this forrest four Afghan asylum seekers froze to death in November 2014. The men were found on the border between Bulgaria and Serbia outside the town of Kireevo. The four Afghan men were in the process of obtaining refugee status in Bulgaria but tried to cross the border, and in the harsh cold weather and fog they got lost and froze to death. Image is taken on 9th December 2015. 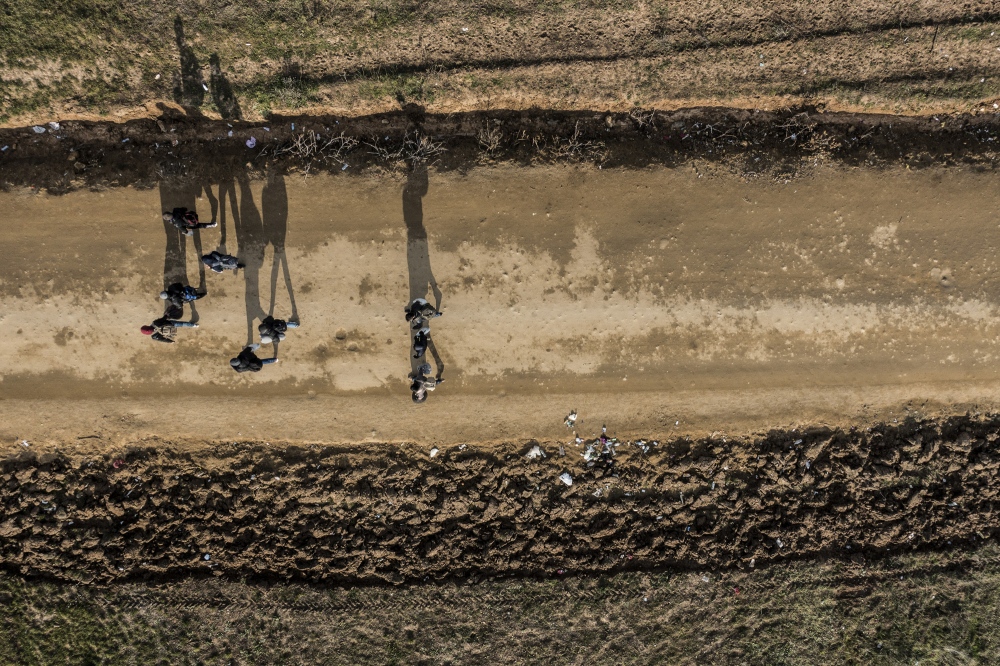 8 of 19 © 2020 Rasmus Degnbol
A group of young afghan boys and girls walk along the dirt road after crossing the border into Serbia near Tabanovtse on the 8th December 2015. 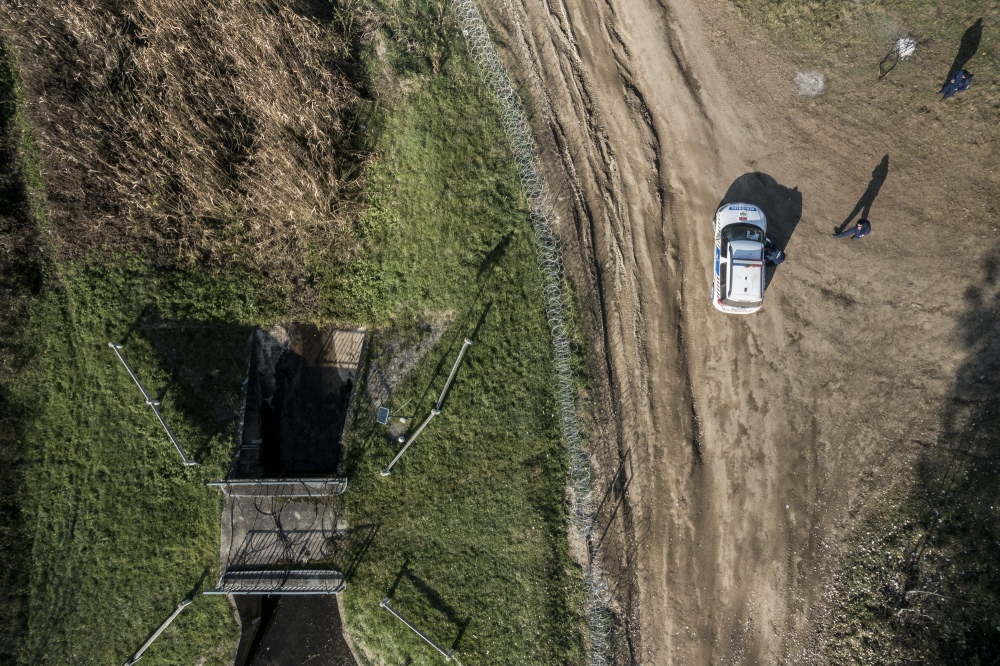 9 of 19 © 2020 Rasmus Degnbol
Hungarian border police patrols the newly made border fence at Röszke near the border to Serbia on the 4th November 2015. The September 14th Hungary saw over 10.000 refugees and migrants cross over their borders and the same day they completed their border fence and cracked down on anyone trying to cross illegally into the country. Now numbers are down to under 100 pr. day having sealed off the entire southern border stretch. 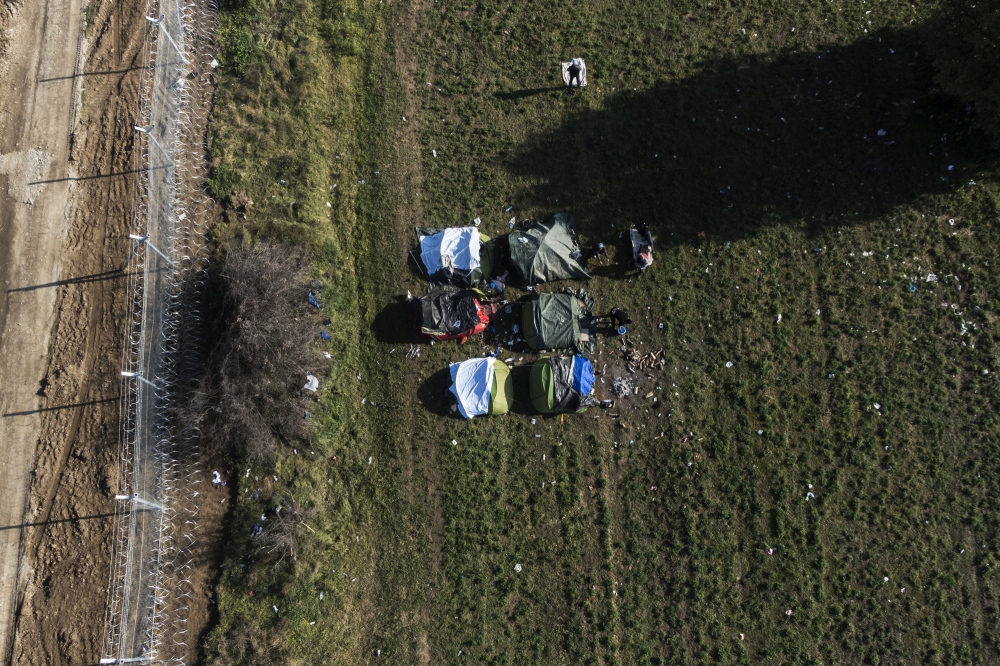 10 of 19 © 2020 Rasmus Degnbol
Rejected Moroccan migrants sits at their makeshift camp right beside the newly erected Macedonian border fence to Idomeni, Greece on the 5th December 2015. 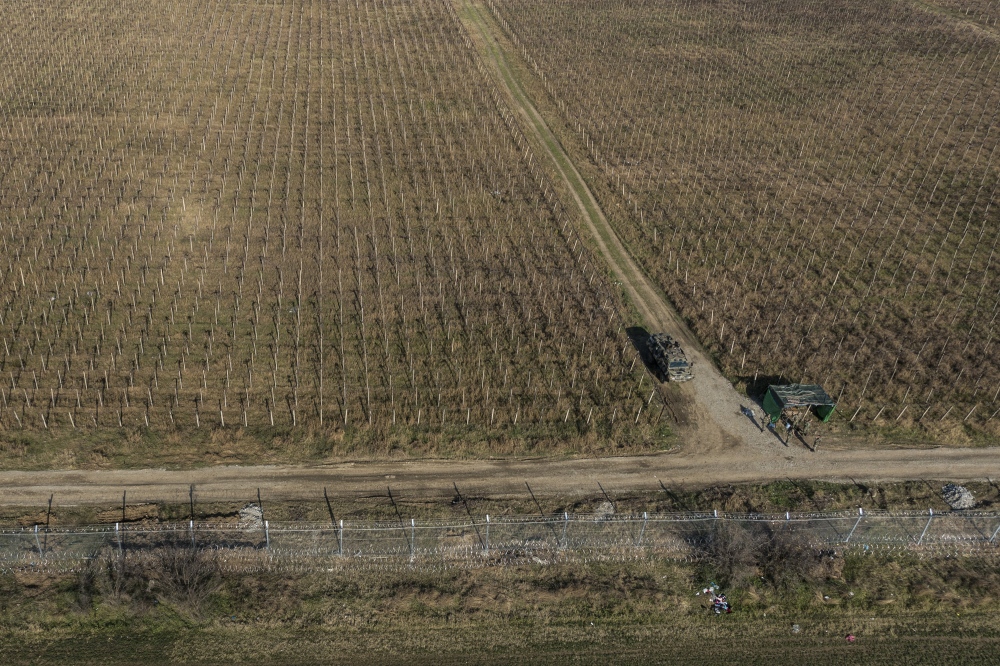 11 of 19 © 2020 Rasmus Degnbol
Macedonian military guards their barbwire border fence towards Greece on the 5th December 2015. They are armed with kalashnikovs and heavy machineguns protecting the border against the almost 10.000 refugees and migrants on the other side in Idomeni, Greece. 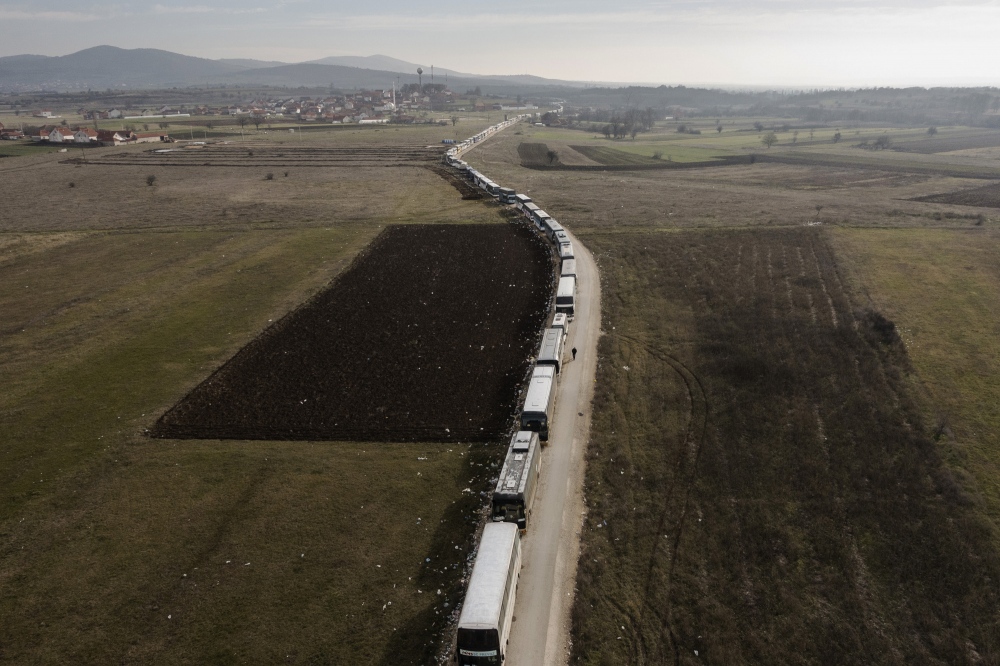 12 of 19 © 2020 Rasmus Degnbol
A 4 kilometer bus convoy waits outside of the receptioncenter in Presevo, Serbia on the 8th December 2015. The busses come from all the borders of Serbia and are privately owned and run, they companies often charge overprice for the tickets. Now they wait for the refugees to return to take them further north. 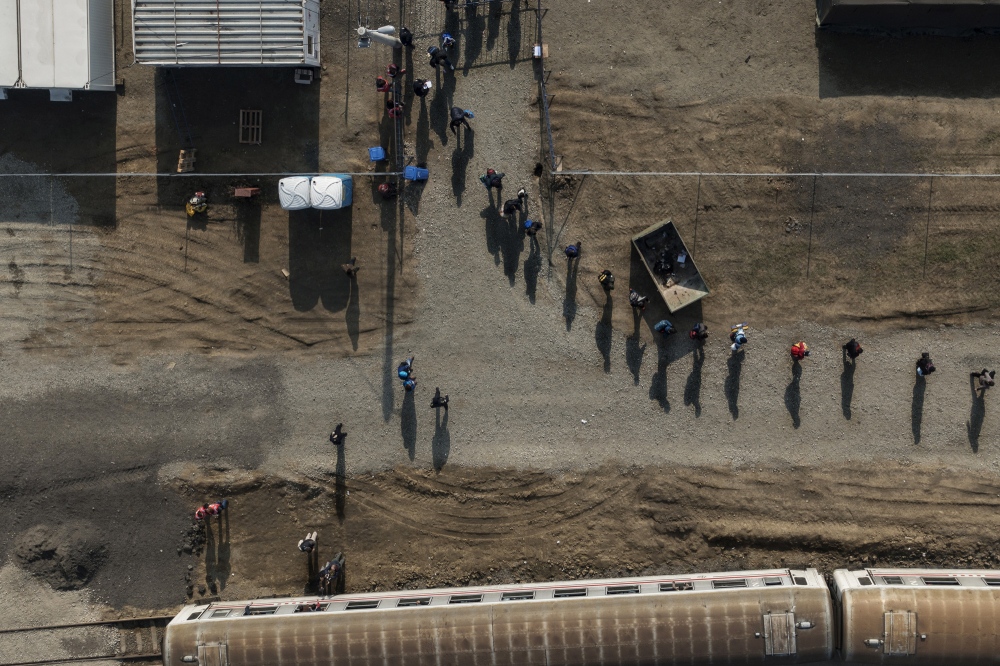 13 of 19 © 2020 Rasmus Degnbol
Refugees and migrants in the Croatian winter transitcamp Slavonski Brod are marched towards the train that will take them to Slovenia on the 6th November 2015. They have been in the camp for 5-6 hours where they have had access to hot tents, food and medical assistance. 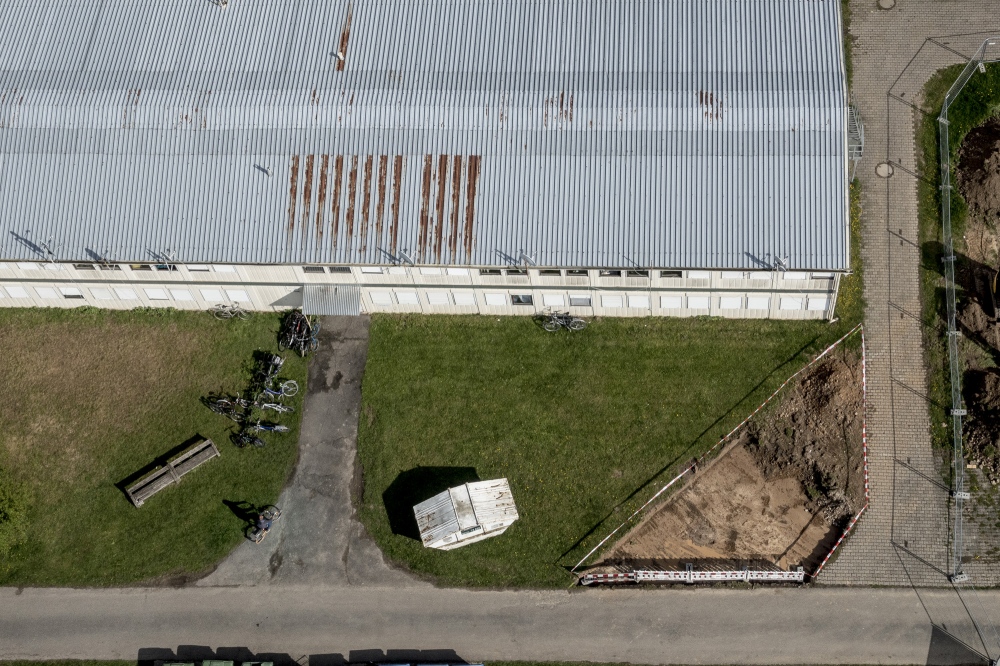 14 of 19 © 2020 Rasmus Degnbol
A asylumseeker from Eritrea bikes toward the refugee center in Oberursel, Germany on the 24th April 2016. The center have over the last 5 years received complaints about the living conditions. The owner, a former Stasi-general Mr. Pohl owns many similar centers around in Germany, all in the same state and have numerous times been accused of using the situation for hos own benefits. A foreigner reported him to the authorities earlier in 2015 and now a new center is being built right next door. 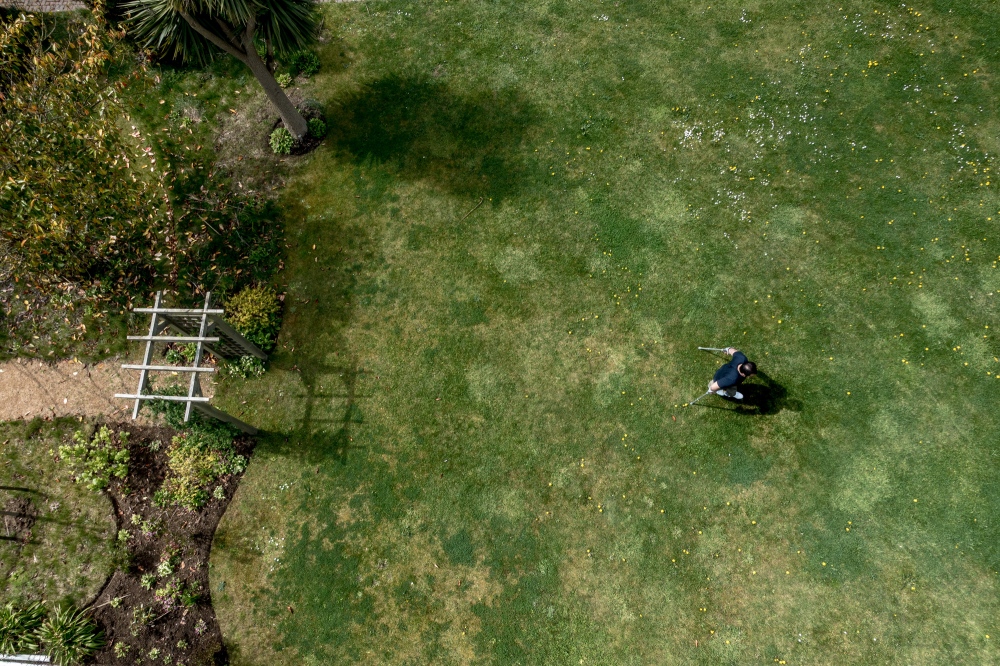 15 of 19 © 2020 Rasmus Degnbol
Amir walks in the garden outside his apartment on Jersey in the Channel Islands on the 23rd April 2016. He arrived from France in the boot of his brothers car, but was caught by Jersey law enforcement. Armir is the first official refugee to reach Jersey island but because the Island does not have any asylum laws, Amir is currently awaiting his sentence as a criminal case. A local charity had Amir released from prison on bail, and have since provided him with a room at the local church while he awaits his verdict. 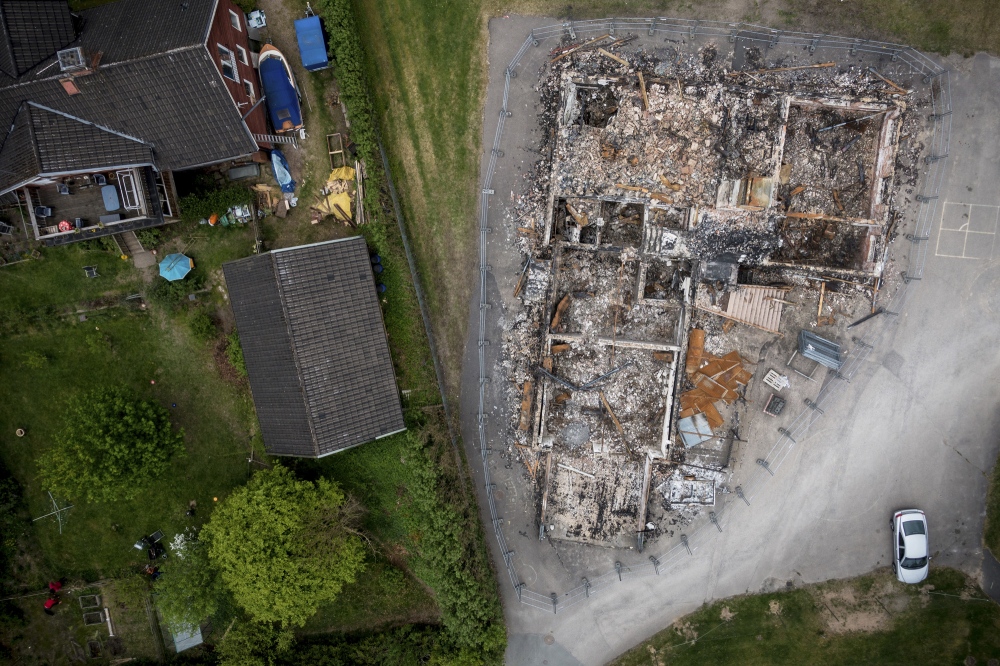 16 of 19 © 2020 Rasmus Degnbol
Kånna, Sweden. The local school was arson attacked on 15th October 2015 the day before it was supposed to be housing 80 asylum seekers. The police is currently investigating the attack. On the walls graffiti with hateful rhetoric towards immigrants are written. Sweden have been struck by countless arson attacks since receiving almost 200.000 refugees and migrants in 2015. 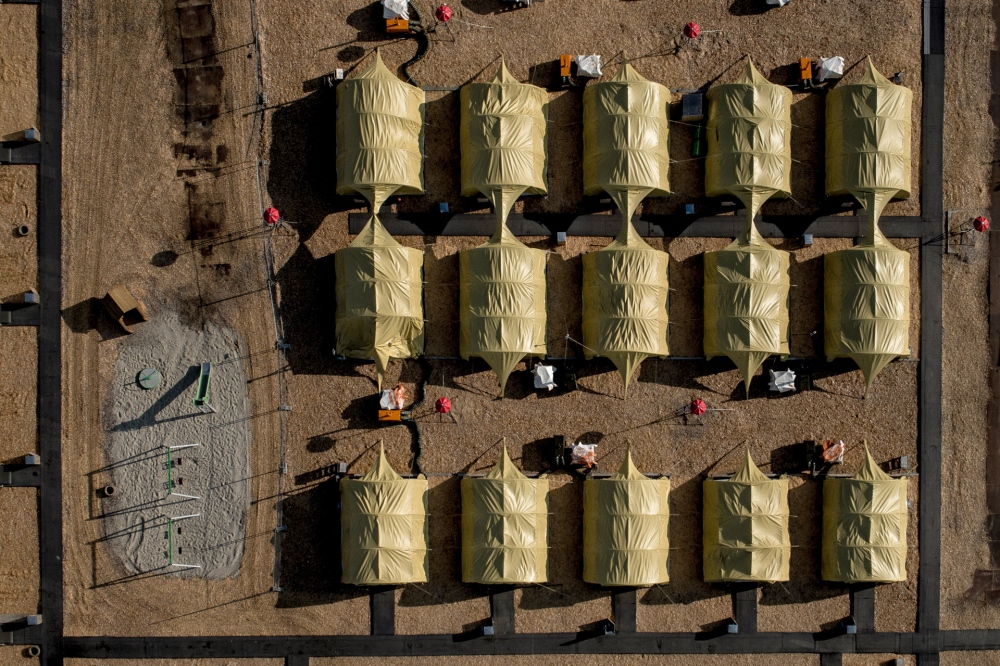 17 of 19 © 2020 Rasmus Degnbol
15. September 2016. The now empty asylumseekers tent-center in Haderslev, Denmark. The camp was opened in January 2016 to accomodate the rising number of asylumseekers reaching Denmark. Since the opening this camp have been highly critisized for being unnecessary as the regular Danish asylumcenter has free space. 3. September 2016 the camp was closed down and the almost 200 male inhabitants were moved to other center arounds the country. 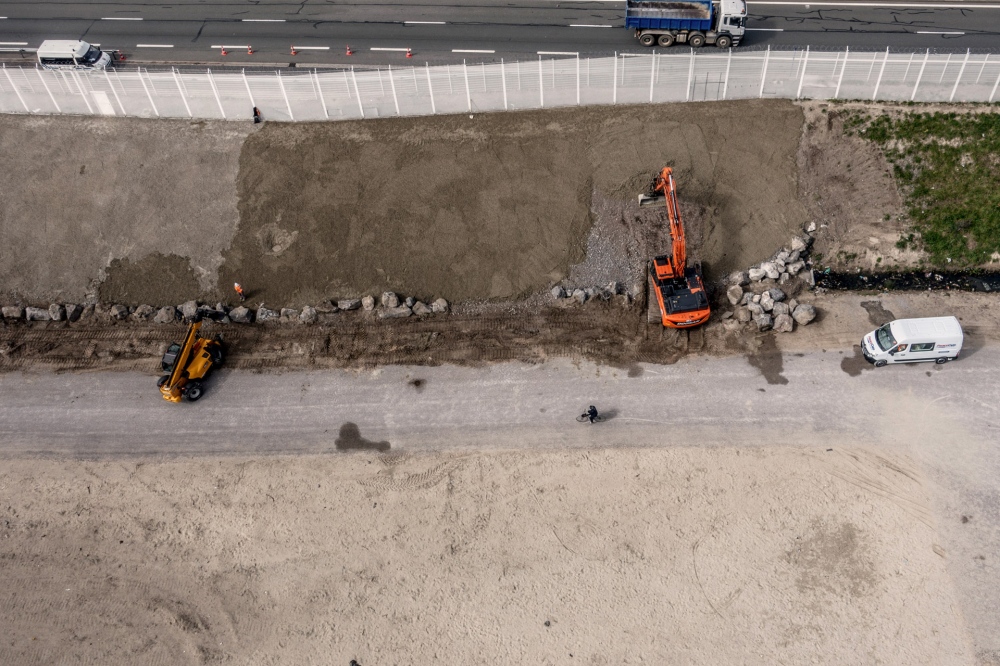 18 of 19 © 2020 Rasmus Degnbol
Workers maintain the fence at the edge of The Jungle in Calais on the 19th April 2016. A migrants bikes past. Early March the french authorities cleared half of The Jungle pushing out migrants to live elsewhere. 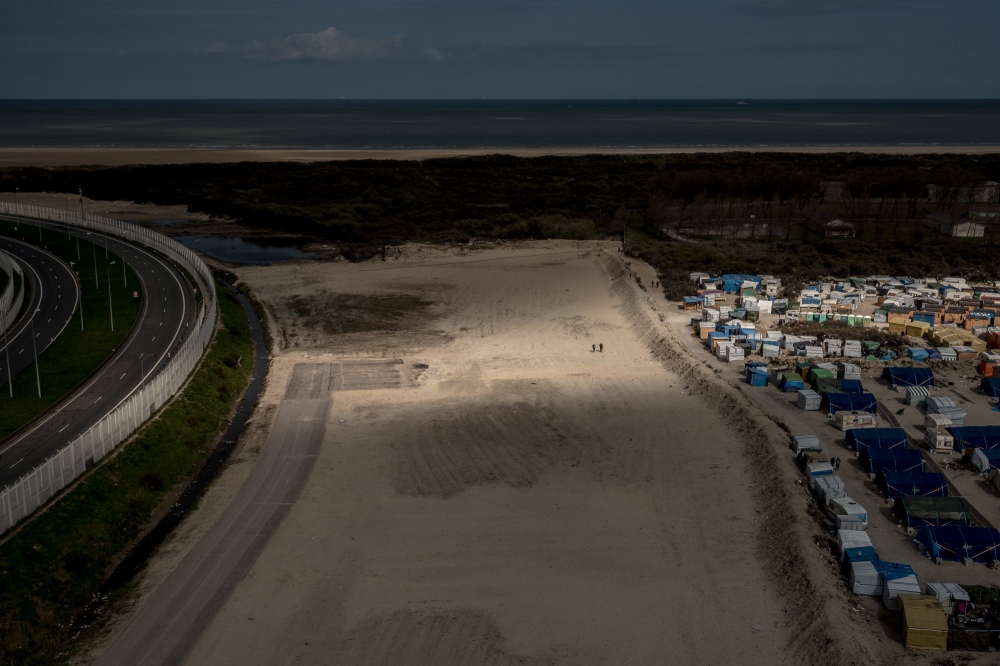 19 of 19 © 2020 Rasmus Degnbol
Two migrants walks in the bufferzone at the Calais camp known as The Jungle on the 19th April 2016. A newly made area the clearly marks The Jungle and the freeway - this zone referred by police as the bufferzone makes it easier to spot migrants trying to get near the fence where trucks go to the UK.
Public Story
Europes new borders.
Credits: rasmus degnbol
Updated: 04/27/17
Location: Lesbos
Archived as:  Abandonment, Aerial, Borders, Documentary, Editorial, Forest, Freedom, Globalization, Historical, Human Rights, Immigration, Landscape, Migration, Photography, Photojournalism, Technology

As a child of the 1980s, I remember the holiday trips in our gray Audi 80 to Spain with the family, I was sitting in the passenger seat beside my father with the map that covered the entire windshield when it was unfolded. When we stopped and took a small break my dad showed me the borders on the map, and told about the different countries and cities. When you crossed the border it felt like a new world — when I, as a child, suddenly heard German, French, and Spanish words for the first time, or I was allowed, on rare occasions, to hand over our passports to the border police when we crossed. March 26, 1995, was the end of using our passports through Europe; when the Schengen Treaty was implemented, almost 10 years after the first had been signed, Europe suddenly seemed a little more united, and free.

Borders are something that is difficult to define for those of us who have never experienced war or unfriendliness in the European countries, and with both the Schengen agreement and EU enlargement in the early 2000s, the borders had become increasingly blurred in our consciousness — until 2015.

Fences, barbed wire, and armed militant border guards have suddenly become the new standard in Europe, and as I, in the early summer of 2015, was watching all the physical manifestations and transformation of something I thought belonged to the past, I decided to photograph these “new” European borders and what consequences they have and will have for Europe and the hundreds of thousands of refugees and migrants who these days come to our borders. All this was done using a technology developed by the military: the drone.

My project, Europe’s New Borders, offers a sense of scale on the dehumanized border crisis unfolding in Europe throughout the last two years. It covers most of the borders of the European Union, the transformation of these, and the consequences, big and small, concrete and abstract, for the refugees and migrants.

By Rasmus Degnbol / Kyrgyzstan — Stigma is the story about a lie and how this lie was manufactured for the only reason of stealing..
Aug 12, 2015