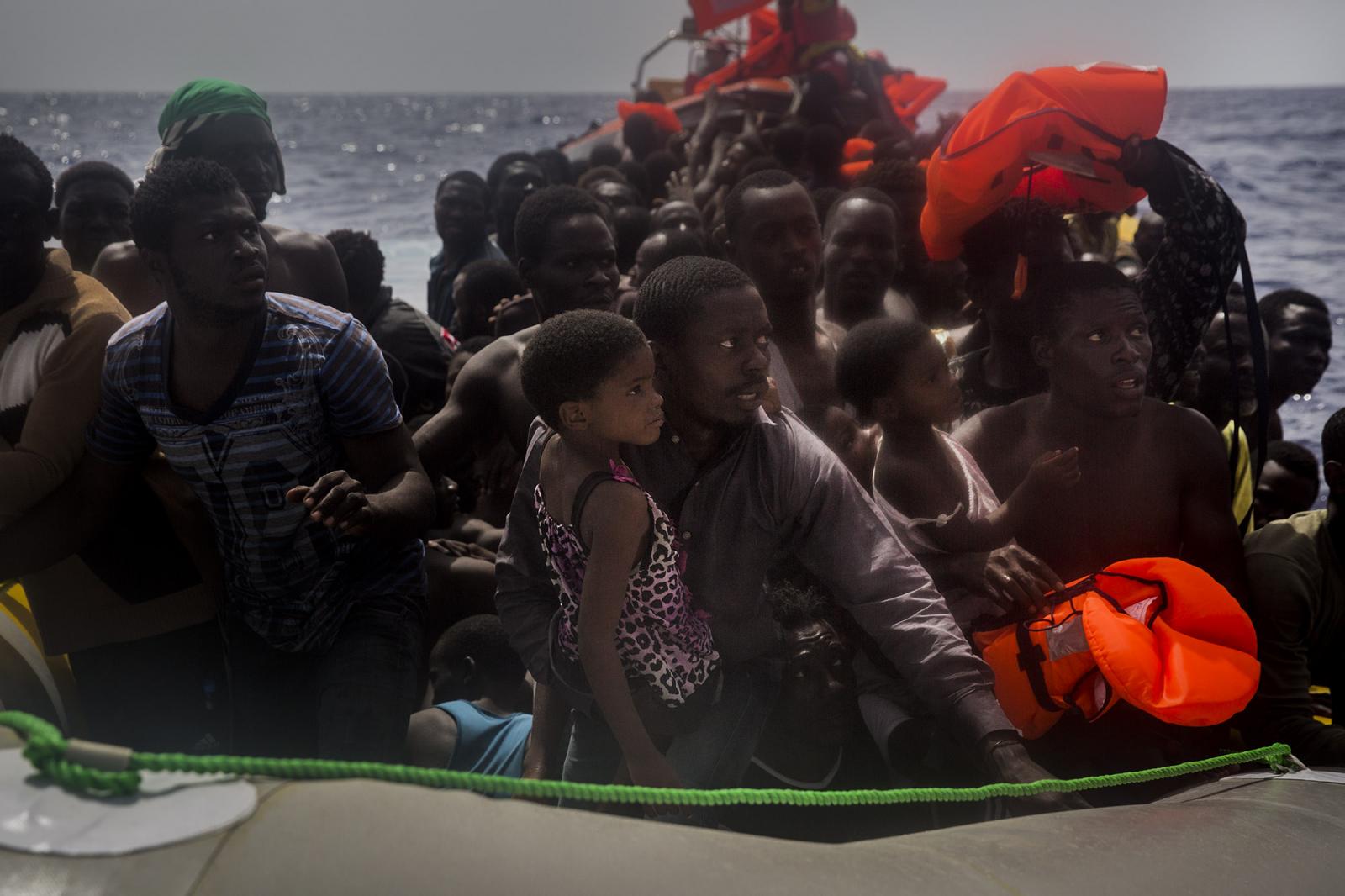 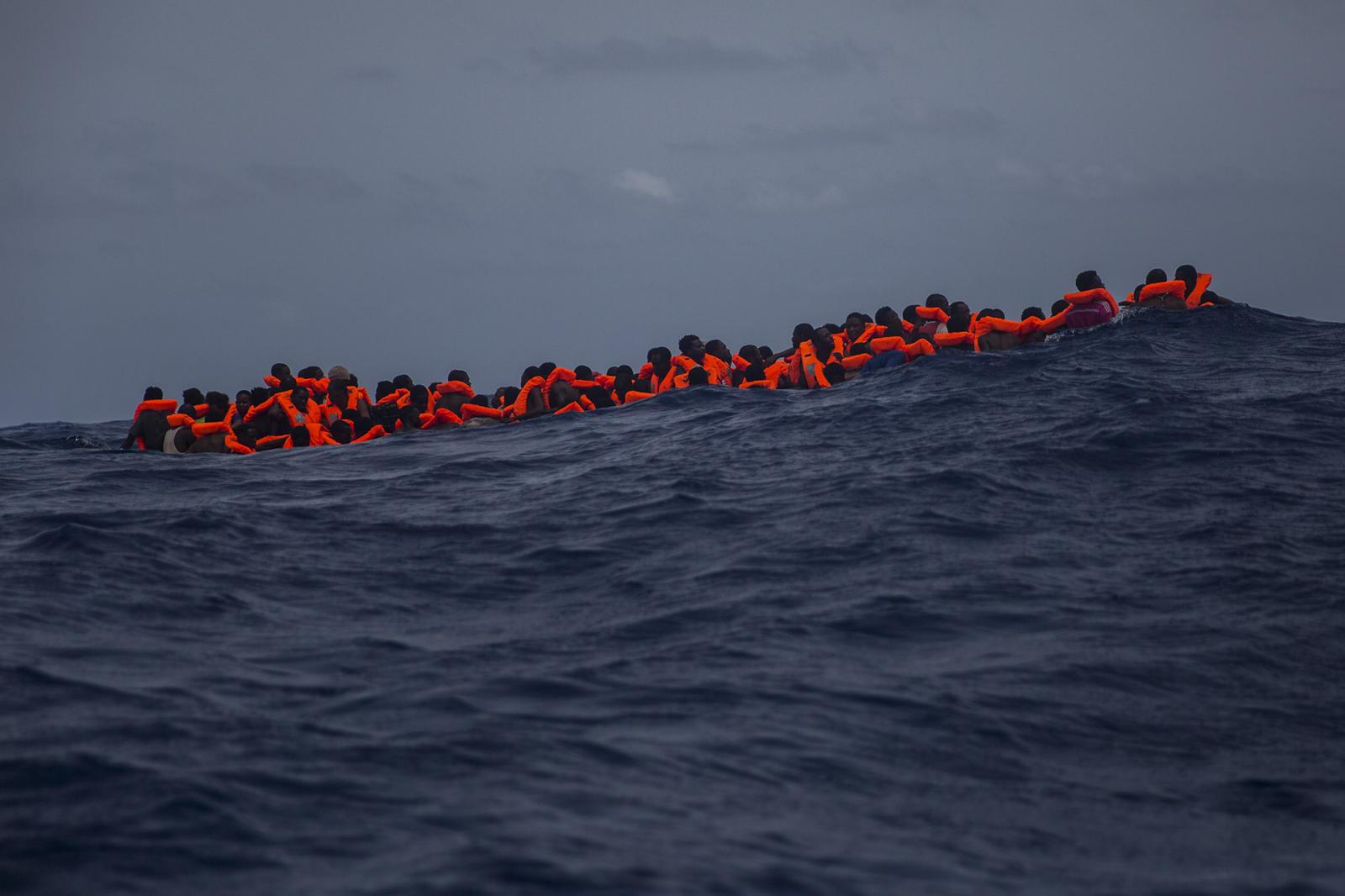 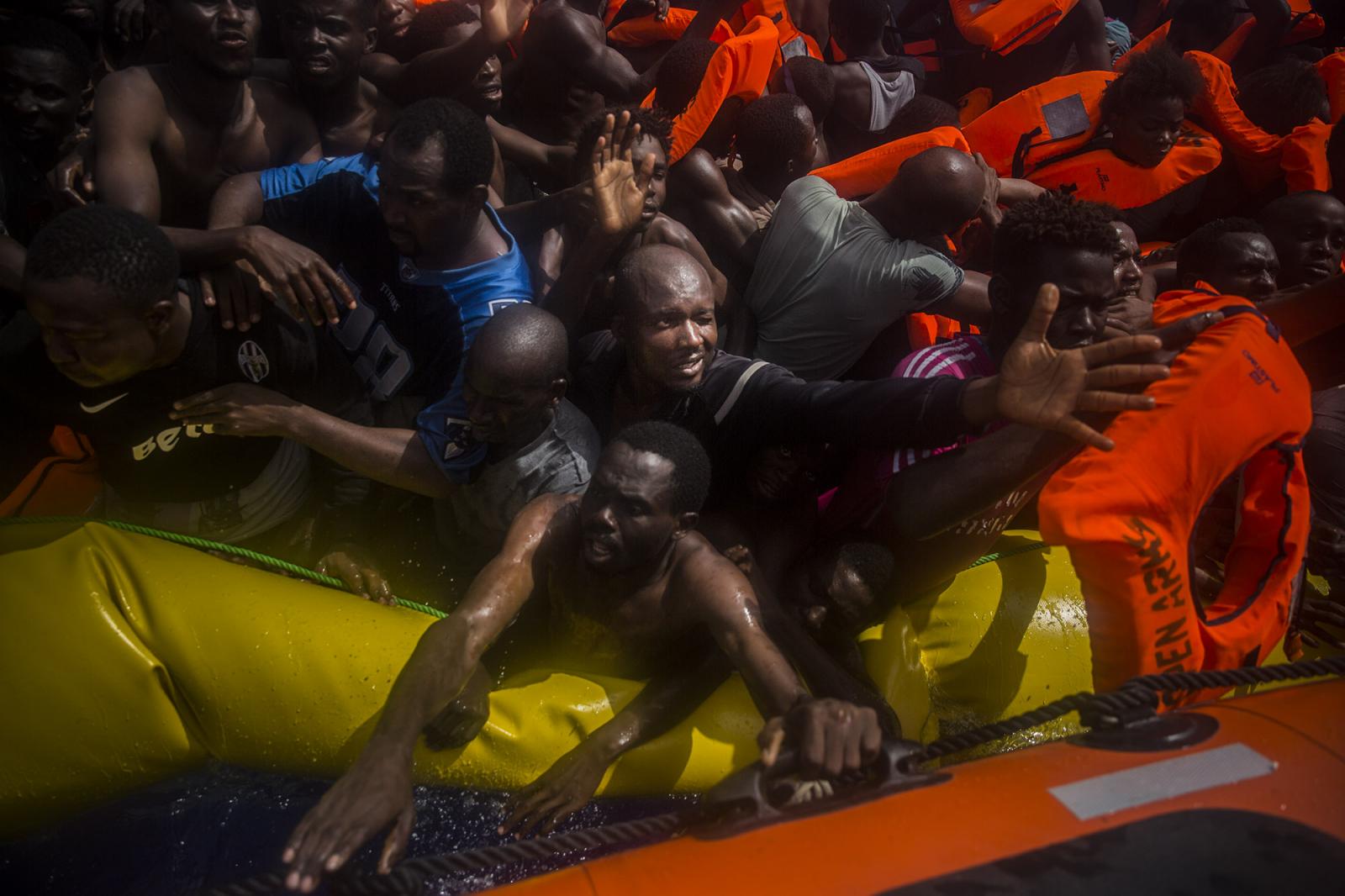 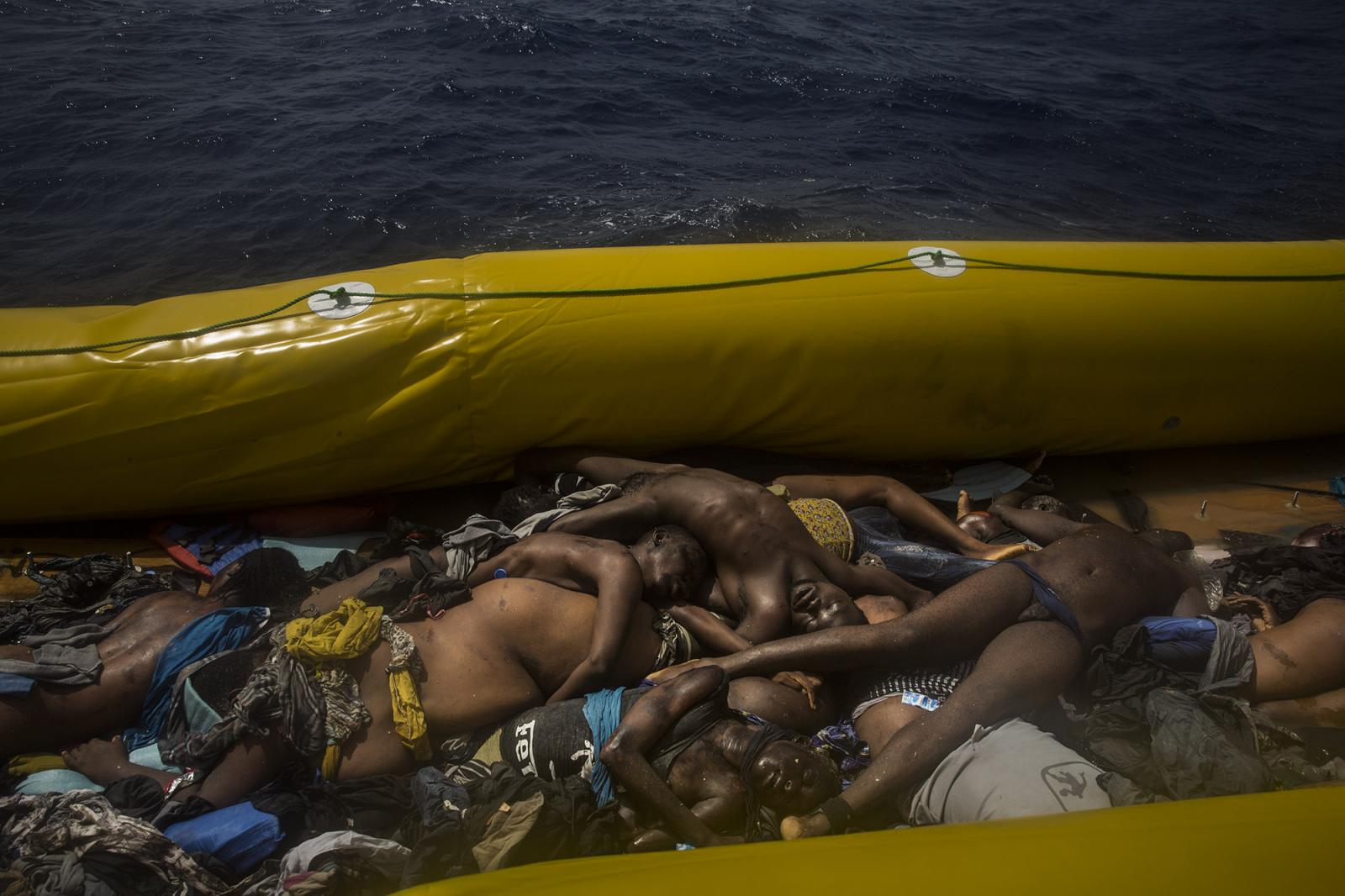 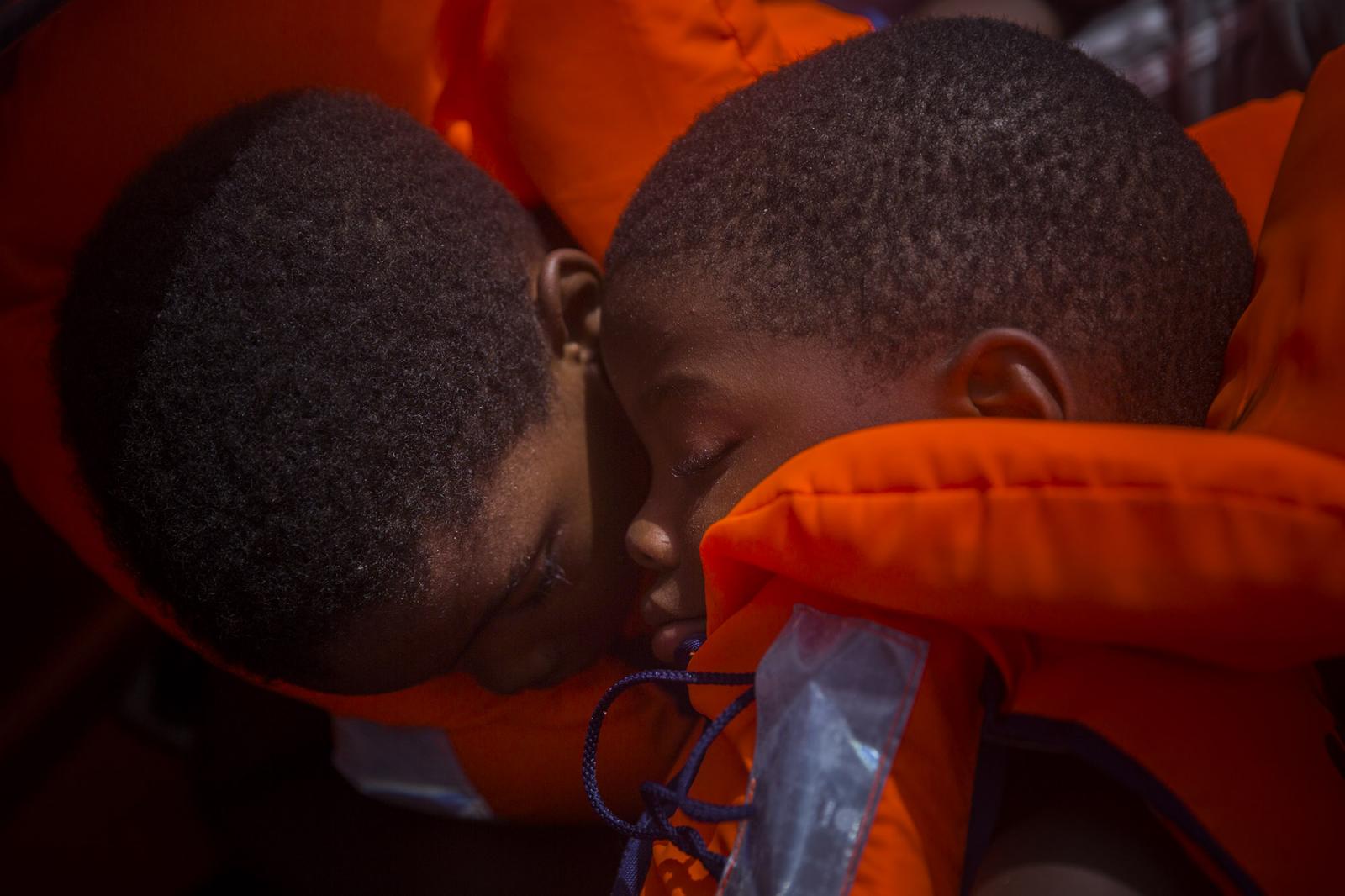 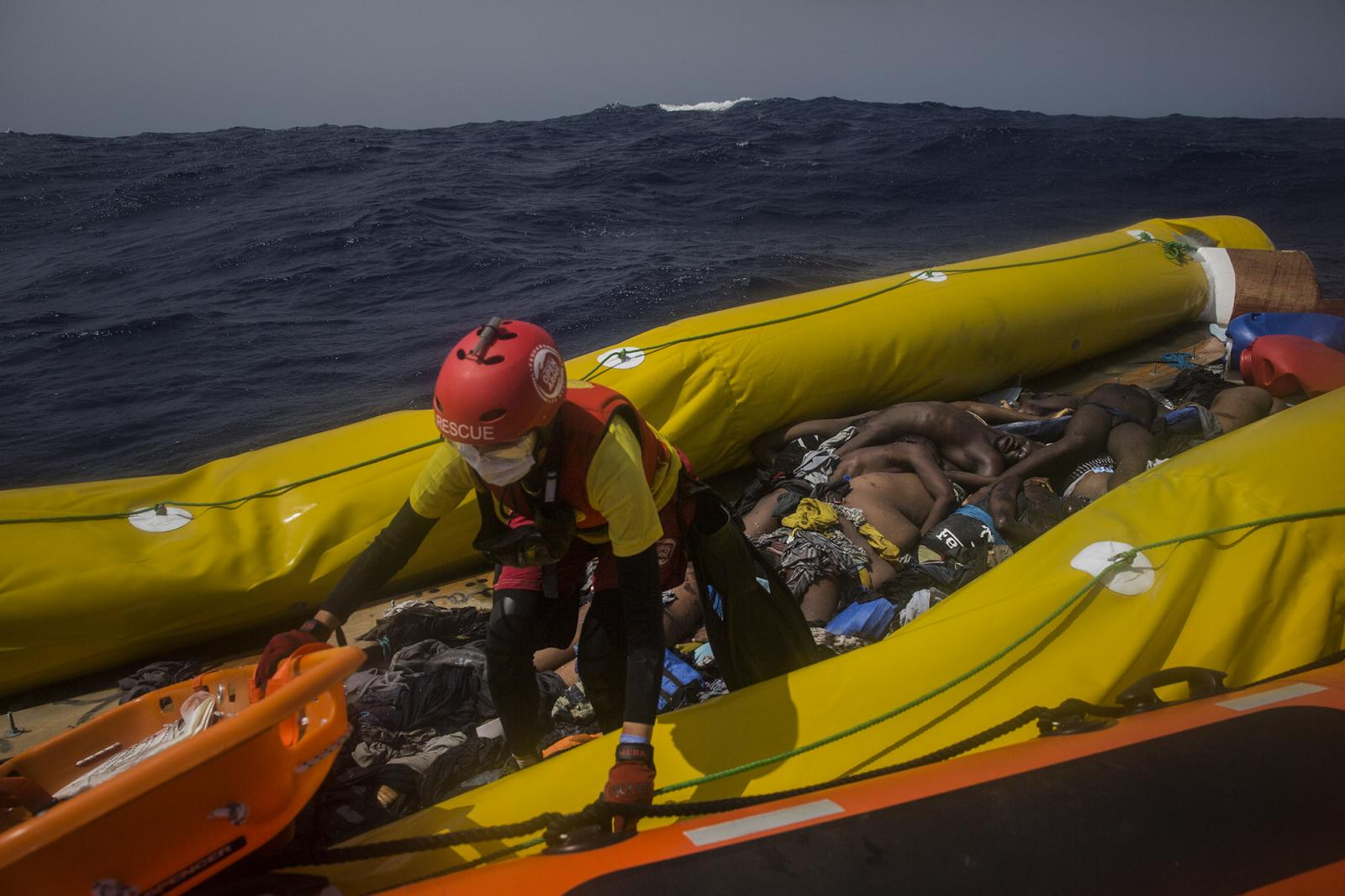 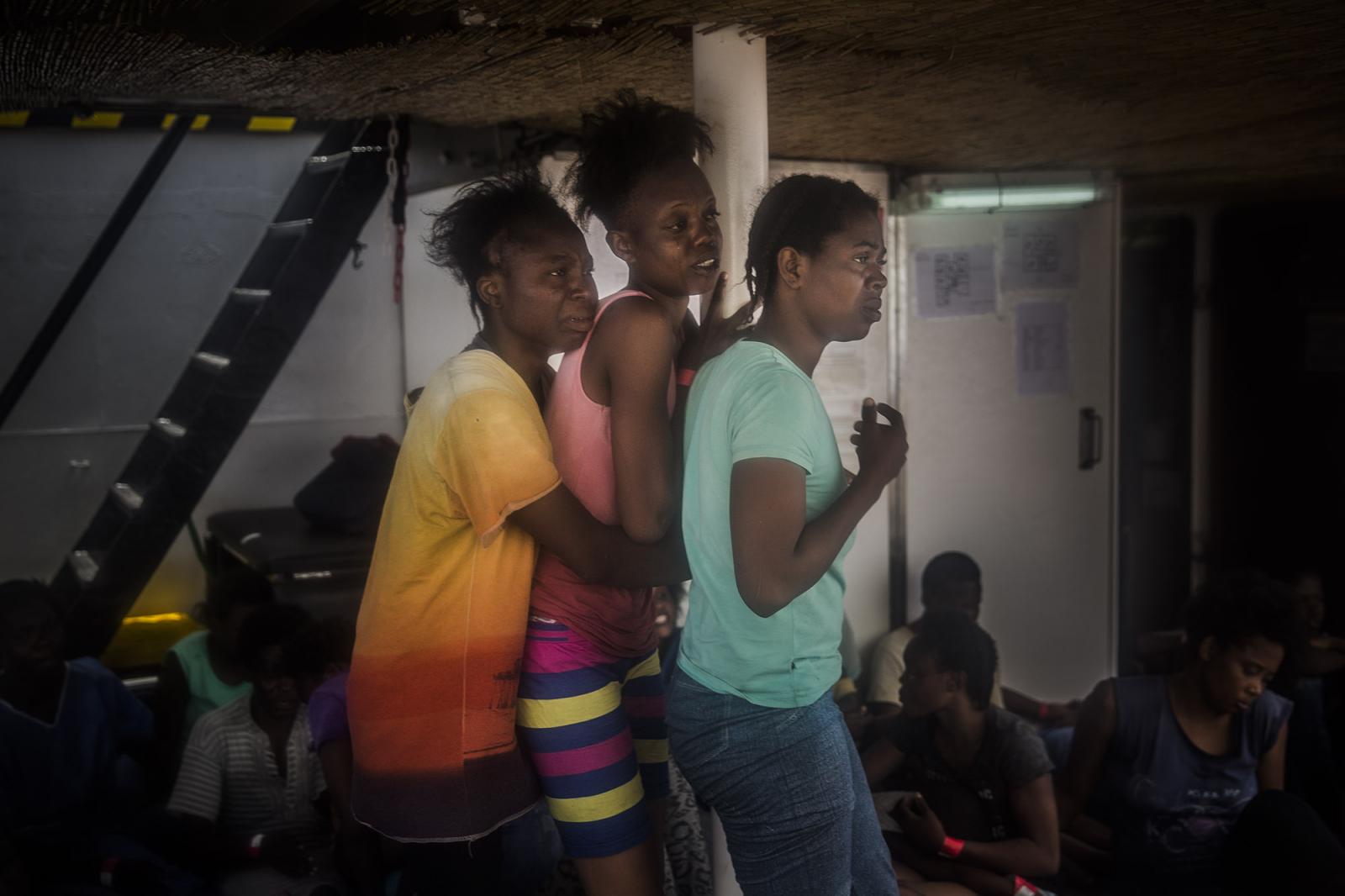 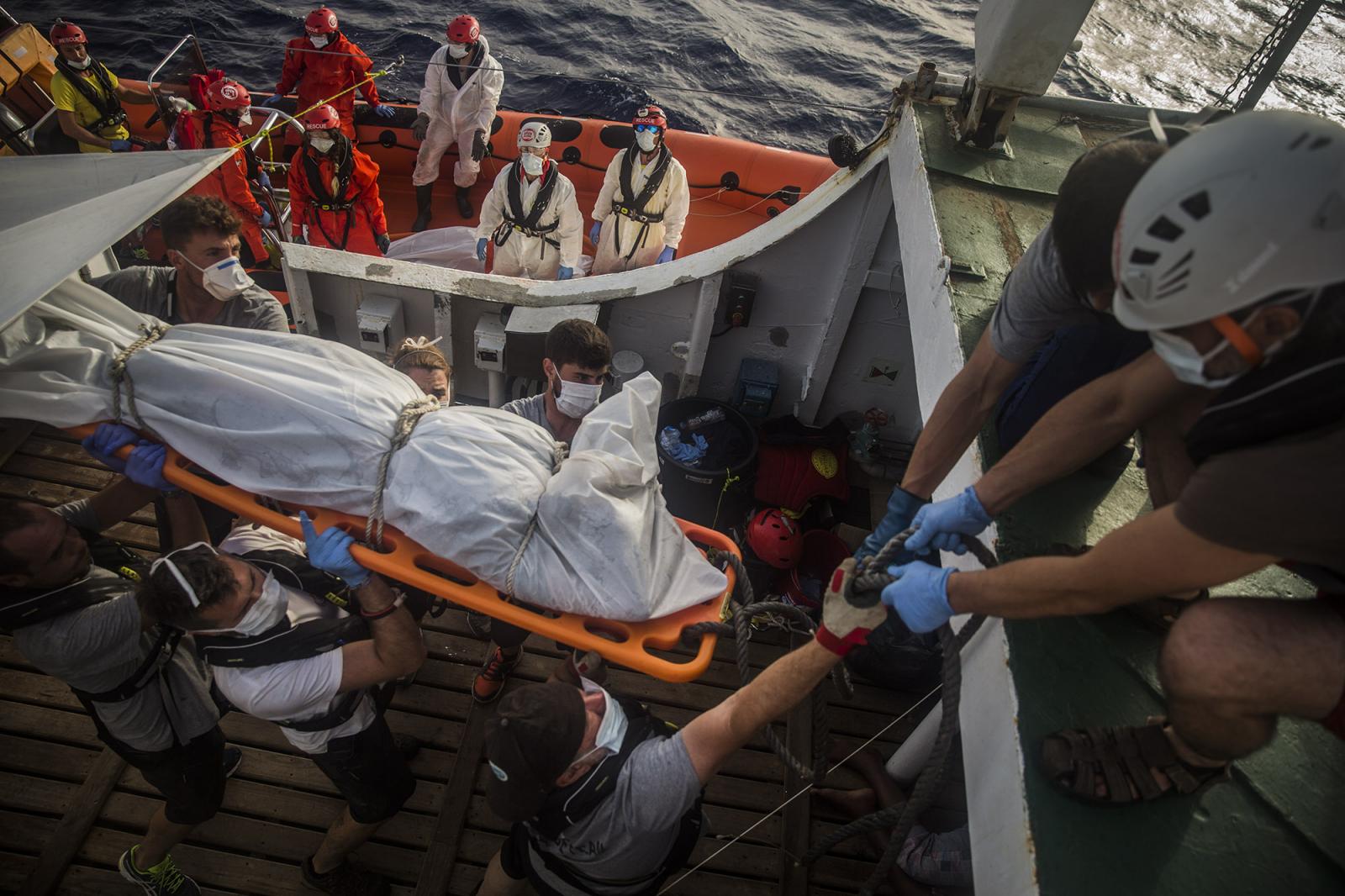 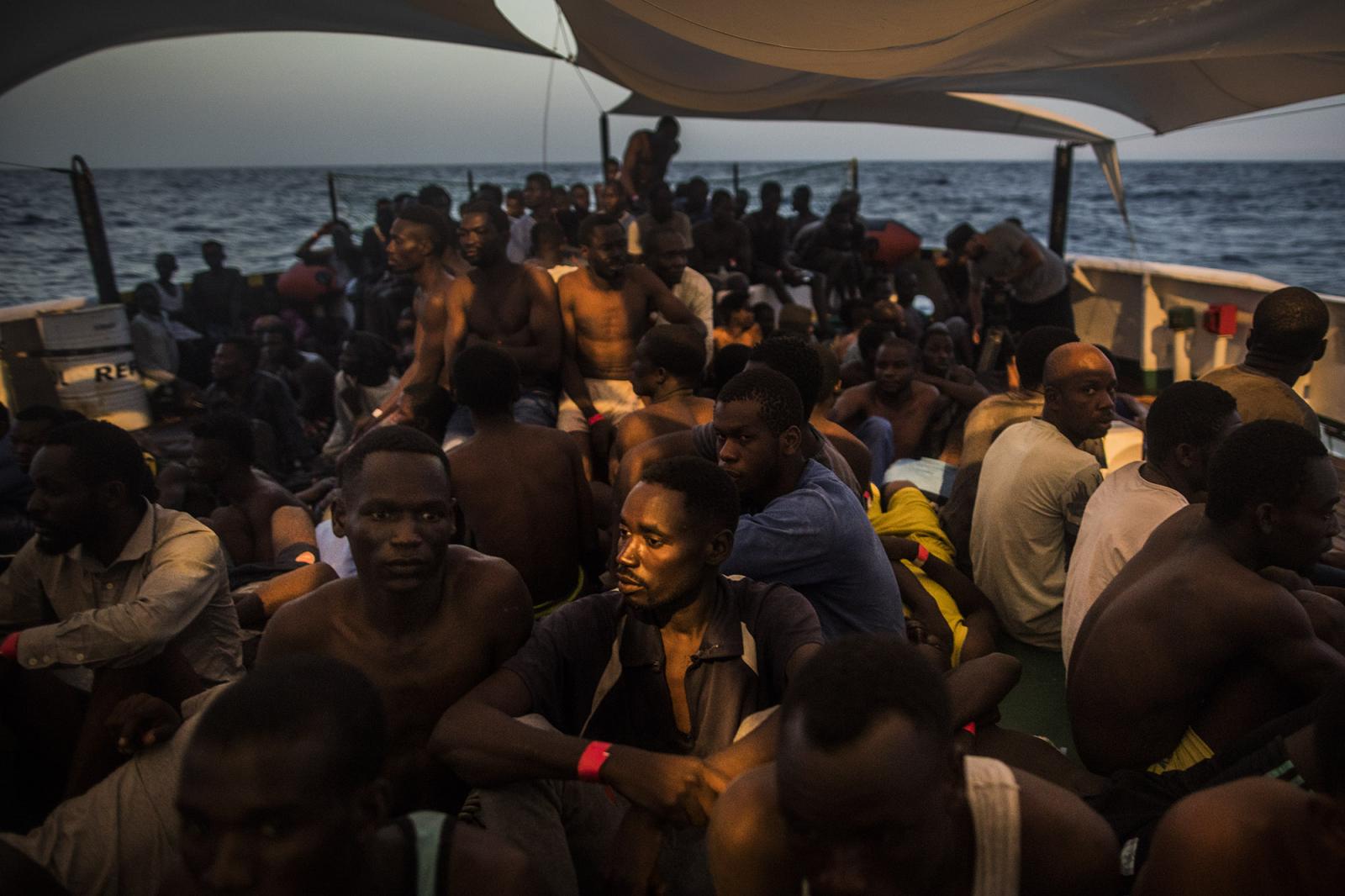 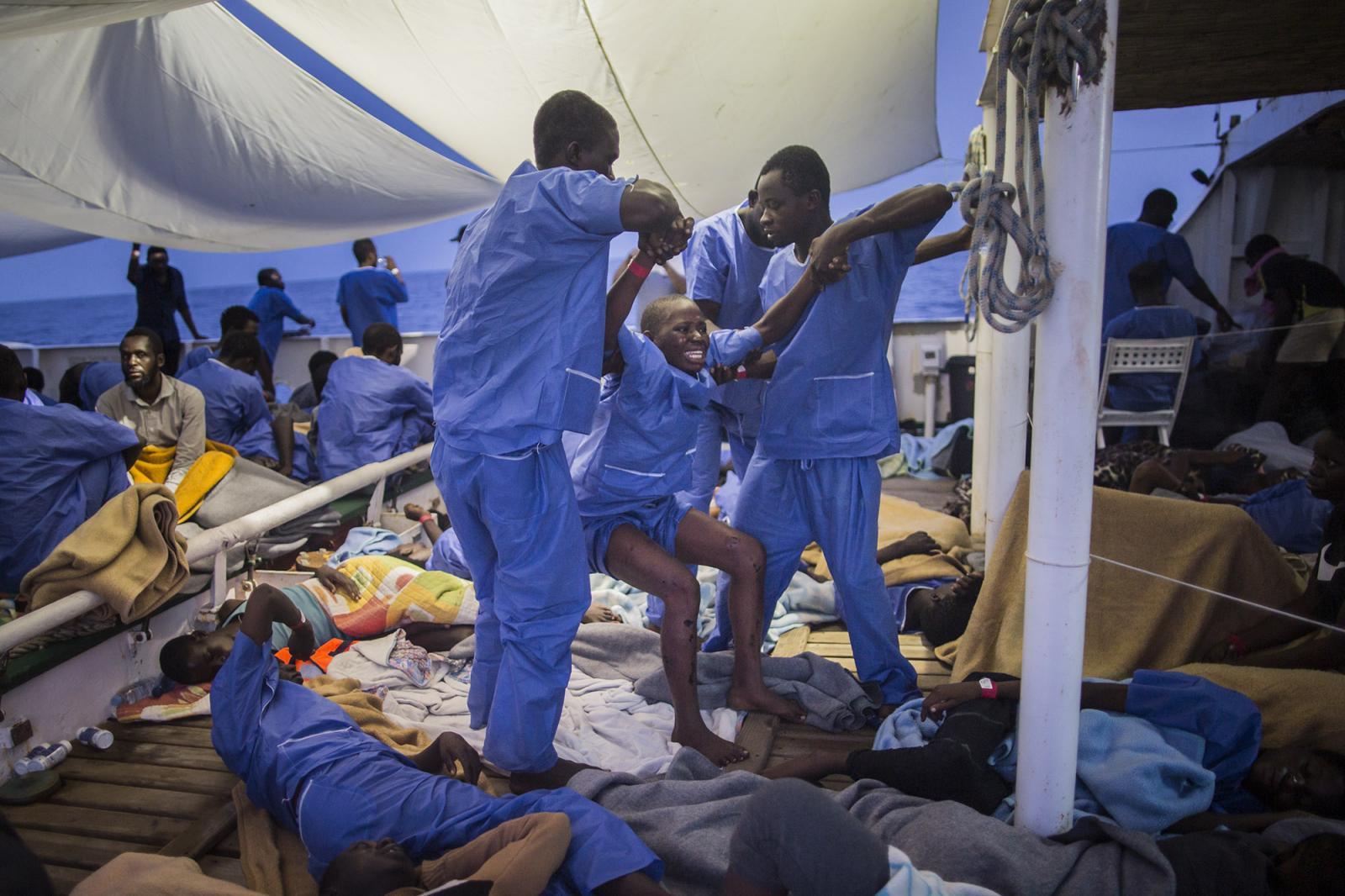 10 of 10 © 2020 Santi Palacios
Public Story
SAR ZONE
Credits: santi palacios
Updated: 10/04/20
Location: TRIPOLI
Archived as:  Borders, Dead migrants, Immigration, Libya, Mediterranean, Migrants, Migration, Photography, Poverty, Sar zone, Violence, War, Water
Central Mediterranean sea, off the Libyan coast I 2017
On July 25 we awoke to rough seas in the central Mediterranean, some 15 miles north of the Libyan city of Sabratha, in international waters. The Spanish rescue ship Open Arms, belonging to the NGO of the same name, pitched and rolled on the open water, making us believe that that day there would be no rescues to be made – it seemed impossible that a single dinghy could have launched from the Libyan coast in those winds.

But we soon received a call. The team was to take two outboard search and rescue boats and head towards a vessel around 12 miles from our position. The journey took us nearly half an hour over the rough waters. Everything pointed to a difficult rescue.

The military aircraft that had spotted the dinghy and given the alert flew over us several times before we reached the boat, and when we arrived we were met with an overcrowded inflatable raft. While one of the SAR boats approached from the stern of the craft to distribute life jackets to the more than 180 occupants, the other pulled up alongside the bow. Several children smiled at the arrival of the rescue team, while the faces of the adult passengers revealed panic.

As we approached, a Nigerian occupant at the stern shouted to us that there were victims aboard. Another said that several people had fallen overboard during the night. Another told us there were five dead; yet another, that the casualties were two. There was still no way of knowing.

They had sailed from Sabratha the previous day, and had spent nearly 24 hours on the water. The motor had failed off the coast, and they were left to drift in the open waters.

We circled the raft several times. The plan was to distribute all of the life vests and keep watch over the boat until the Open Arms arrived to our position, which would take at least an hour in these rough waters. Some people were vomiting; others were screaming. Even more were unconscious or about to collapse. The rubber dinghies were losing air, and those who were sitting on them were falling into the water.

In the moments captured in the first photographs you can see people standing on the inert bodies of mothers, wives and husbands, although we still did not know how many bodies lay below.

After what seemed like an eternity, we sighted the Proactiva boat. A few minutes later, Open Arms pulled up alongside us and we began to move the occupants from the dinghy to the rescue boat.

We began with the women and children. As we helped the people onto the boat, it was clear that the situation was much worse than we had originally imagined. Many women were naked or nearly naked and in shock. In the midst of the chaos we could see wounds and burns. Later, two of the women explained to the medical team that they had been raped in Libya.

As we helped the survivors off of the raft, the bodies began to appear. Those on the dinghy stepped on and over the dead as they tried to reach our boat. The smell of gasoline was getting stronger. The wind blustered and the sun beat down on us. The largest woman lying lifeless at the bottom of the raft was the mother of the four children we had brought on to the rescue boat: Gift, Divine, Domino and Destiny, from Nigeria.

Rescuing the bodies was extremely complicated. We had to jump on to the raft, with the risk of receiving burns on our feet and ankles from the mixture of diesel fuel and salt water; choke down the stench that crept into our lungs; keep our balance, with the waves battering the boat, while the bodies were put into bags; and transfer each lifeless body from the dinghy to the rescue boat, and from there, to the mother ship. The operation took several hours.

168 people were rescued alive that day. Many slept on board the Open Arms when night fell. Others tried. There were empty gazes and the palpable tension that pervades difficult rescues – those that are made in dire situations. Their eyes told us they had experienced something that they longed to forget.