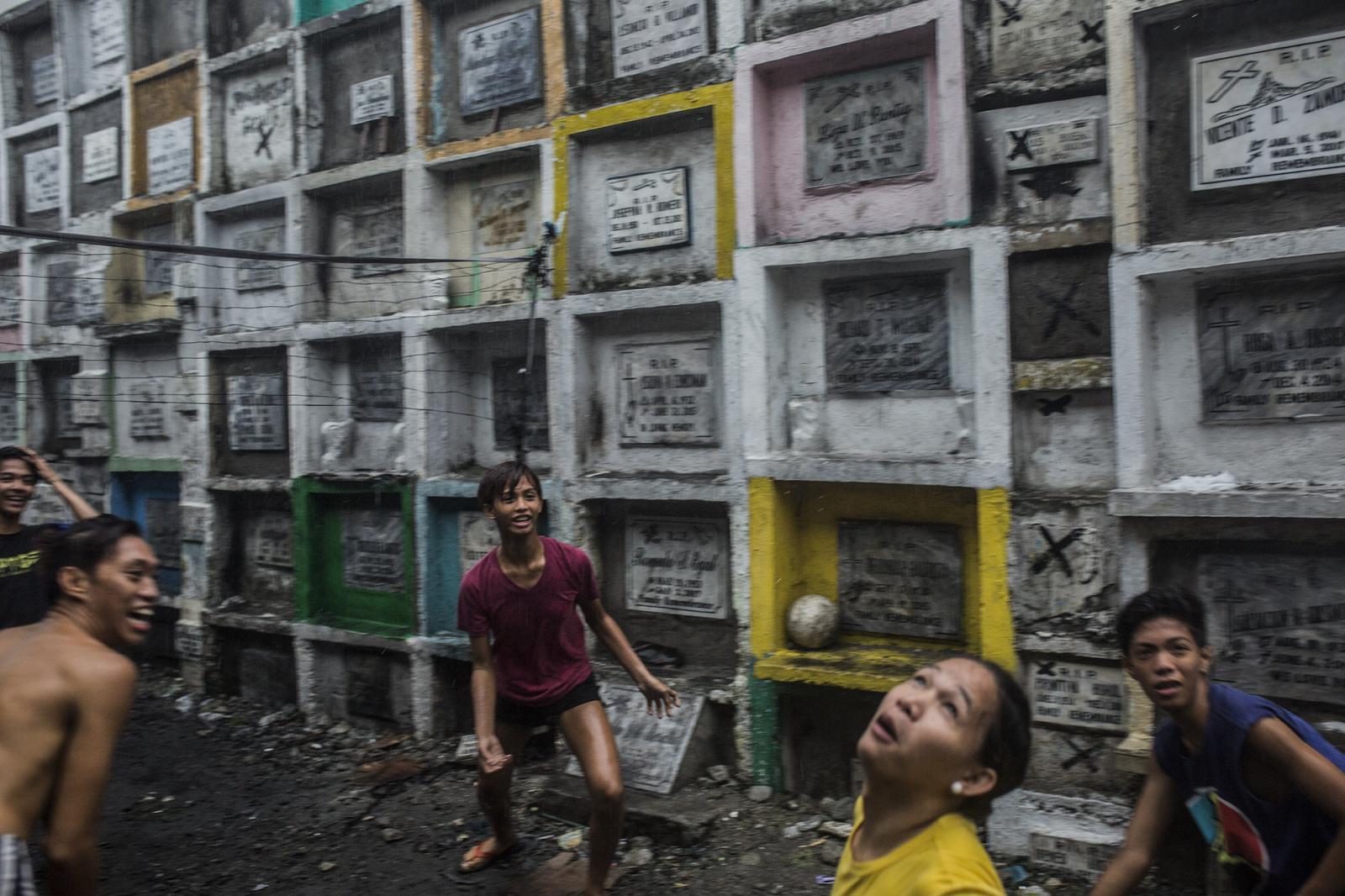 Navotas is one of the seventeen districts of Metro Manila, a humid and congested city home to thirteen million people. It also includes the fishing port, the containers and Palafitos (stilt houses), humble homes and a decrepit public cemetery in San José, full of run-down niche tombs, most of which are in a terrible state.
There, a unique event takes place almost every day: a group of young people hang a net between two walls of tombs and, with quick and accurate movements, practice volleyball among the graves. They are Bernabe, Onad, Lester, Art, Eses, Kaila, Kian: young people who live near the cemetery and are part of the Panchon Team ('Cemetery Team', in a mixture of old Tagalog and English).
The group has been practising volleyball in their unusual back garden for the past two years. Bernabe, aged 24, created the team, a young trans-gender woman who is also one of the most widely recognised players in the community. Bernabe moved from the nearby Daanghari suburb to San José, the neighbourhood of the cemetery, to be closer to her partner, Onad, aged 18. Both share a passion for volleyball: they got together a net, a ball and a dozen enthusiastic locals and that's how the Panchon Team came to be.
The corridor between the walls of tombs is the only place with the space they need to train. The cemetery caretakers, who are used to seeing the slum dwellers around there, turn a blind eye. In this team nobody wears a uniform or sports shoes, but rather they use old t-shirts and flip flops. None of them is a professional player, and although they take training very seriously, they do it just for fun, as a way of hanging out and keeping fit. A couple of years ago, certain members of the Panchon Team won a local championship and Bernabe was named MVP: Most Valuable Player.
When there are funerals or relatives visiting the graves, the game stops and the team members move respectfully out of the way. Sometimes, they admit, a wrong hit can send the ball into a broken niche. "When that happens, we have to look inside to get it back. It's a bit disgusting, "says Bernabe. A niche tomb in this cemetery costs 5,000 pesos, around 85 Euros. After five years, payment has to be renewed, otherwise, the bones are removed and the niche is put up 'for rent’ again. If the family does not claim them, the remains end up in large plastic bags and are forgotten.
More than a thousand bodies are buried in the cemetery, among them dozens of victims of the bloody campaign against drugs undertaken by the Philippine president, Rodrigo Durterte, which has hit this part of the city hard. Since coming into power in June 2016, his brutal campaign has left more than 4,000 dead, according to official figures. Different NGOs raise the number to more than 10,000. Most of the victims are people from the poorest neighbourhoods, drug pushers and consumers who die in shootings by the police or civilian vigilante patrols tolerated by the authorities. Many of them end up in this cemetery - so many that nobody bothers to keep count anymore.
Approximately 70 families live here, in the churchyard of San José. A few years ago, the living outnumbered the dead in this cemetery. Some residents estimate that there were about 2,000 people living among the graves, others say the number could be as high as 3,000. The site lost many of its residents in 2015 and 2016, when a relocation programme put an end to the illegal dwellings, demolishing dozens of slums and moving its occupants to the neighbouring province of Bulacan.
Bernabe and her teammates have no intention of going for now, although they know that in the future it may become their turn to leave their homes. In the meantime, they escape from their daily routine by playing volleyball among the dead.
Text by Maribel Izcue
For any professional inquiry contact here