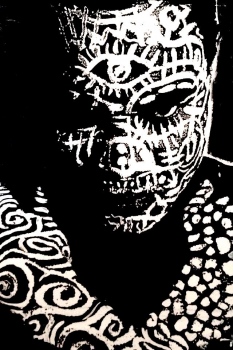 Photographer & Founder of HITIP @ Radio Taboo / Based in Santa Fe

Issa Nyaphaga was born in Douala, Cameroon (central Africa) in 1967 and grew up in the small village of the Tikar tribe, called Nditam, in the very heart of Cameroonâ€™â€™s equatorial forest. The Tikar are primarily farmers and as a child of the fields, Issa spent his time in close contact with earth and nature. Like other Tikar children, Issa was introduced to traditional painting in his early childhood. His father is an herbalist and a calligrapher, and Issa grew up next to shaman pygmy women deep in the region of "Mbam and Kimâ€ in Cameroon. As a child, Issa didnâ€™t like his last name Nyaphaga. "My son, youâ€™ll only be successful in life if you like your name,â€ his mother said.

He was raised in a Muslim family and went to a French school- the only one in the village- where the Bible was the main teaching subject. After school, in the evening, he studied the Koran before calling upon ancestral spirits during Animist ceremonies. "Today, my thought is close to Buddhism. I wake up every morning with a different feeling.â€ As a young artist he began to feel restless. "I needed to do more, get involved in something significant and crazy,â€ says Issa.

After high school, Issa started working as a political cartoonist, illustrator and reporter in a weekly satirical newspaper, Le Messager Popoli. His opposition to the political regime in Cameroon led him to several trips to jail in 1994.

In 1996 he escaped from his country to seek asylum in France. There he began collaborating with the famous photographer Jacqueline Hyde, a former assistant to Man Ray, also known for her work with Botero, Zao Wou Ki (Nobel Prize in Literature), Nicolas de Stael and the two iconic North American painters Riopelle and Joan Mitchell. Issa has worked with many other photographers as well and has been the subject of several documentaries focusing on his life and journey. And has illustrated and co-authored several books published in the United States and France.

Issa has developed a unique painting technique, known as "Capillarismâ€, which uses human hair as a first layer on his canvases (paper, canvas, wood and hardboard) prior to applying color. He also experiments with different textures such as sand, mud, feathers, recycled material and leather. He is said to be the "ragman of paintingâ€ because he rummages in garbage cans, picking up and collecting all kind of objects. He primarily works with salvaged objects. ""I turn disused objects away from their first use and give them a new birthâ€,â€ he says.

Since 1999, Issa has taught his painting and drawing techniques in universities, cultural centers and Social institutions. His artwork has inspired the human spirit of thousands of people in dozens of countries. As an art educator, Issa engages in innovative art projects and he conducts the therapeutic workshops for at-risk and highly vulnerable communities, including children with disabilities, at-risk youth, immigrant families, teen suicide survivors, and child soldiers from Africa.

Issa Nyaphaga is convinced that the power of art can save lives. He knows that art as a process of resilience did not only saved his life but also enabled him to transform his life. Issaâ€™s artwork and teaching philosophy has inspired countless individuals to create limitless possibilities for themselves through their own creativity and freedom of expression. Issa was the first African to bring Anita Woodley, the first African American with Tikar DNA back to his small village in Cameroon:  http://tikarcameroon.blogspot.com/

Issa divides his time between Cameroon, France, China and the United States where he shares his work with young artists. Issa also has been working on the development of a philosophical concept called "Urban Way,â€ in which he paints his body and stages live performances that include music. Issa travels worldwide performing the Urban Way at artists residency programs, museum exhibitions, biennials, and universities. He also partners with schools, cultural centers, community organizations, and foundations to share his artwork and raise awareness about the challenges that his community is facing. Several thousand people have viewed Issaâ€™s artwork and have experienced the Urban Way.

As a way of remaining in contact with his native country, Mr. Nyaphaga has founded Hope International for Tikar People (HITIP) www.hitip.org a non-profit, community-based organization dedicated to improving the quality of life for Tikar and Bedzan villagers and individuals with disabilities in the equatorial rain-forest of Cameroon. HITIP implements sustainable projects focusing on health, education, community organizing, and creating opportunities for villagers with disabilities. Every Summer, HITIP hosts volunteers from around the world to support the ongoing community-based projects in the marginalized villages.  In partnership with the Rotary Foundation, Water For Social Peace a project created by HITIP, provided potable water to more than 20.000 people in 2012. Water for Social Peace received the Global Rotary Peace Award 2012 in Berlin, Germany.

Since early 2011, Issa has been featured for "Radio Tabooâ€, a documentary project by Sophie Rousmaniere and Jay Minton. In 2013 Issa is returning to his small village Nditam in West Africa to build a community radio station to educate villagers about Public health, environmental issues, womenâ€™s issues and HIV infected people. Issa speaks seven languages and holds an MFA in French Literature. Mr. Nyaphaga teaches art, social justice and cultural diversity at the community college in Santa Fe New Mexico.

â€¢ Directed removal Art Therapy workshops for more than 500 at risk youth (child soldiers, disabled, and refugee children) at a first child rescue Human Rights organization, acting under the guidance of UNHCR and the Minister of Social Affairs from September 1998 to November 2001

â€¢ Published over 5,000 cartoons, drawings, illustrations, graphic news and comics in the local and regional newspapers and magazine, reaching a large number of readers in the cities of Cameroon and Central Africa.