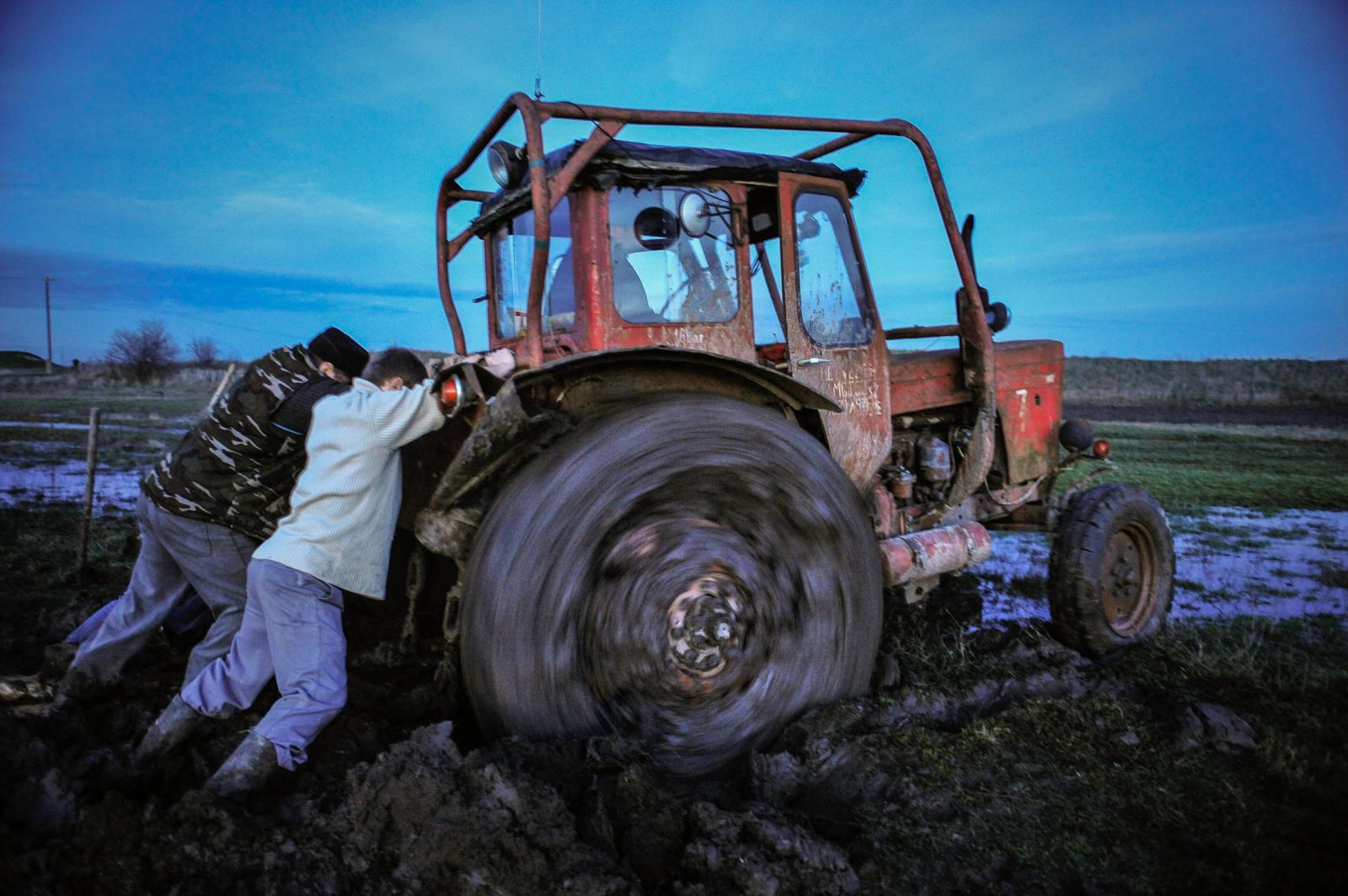 A tractor stuck in mud at the "Large Lawn", the former Lenin settlement in the Hungarian village of Csanytelek. 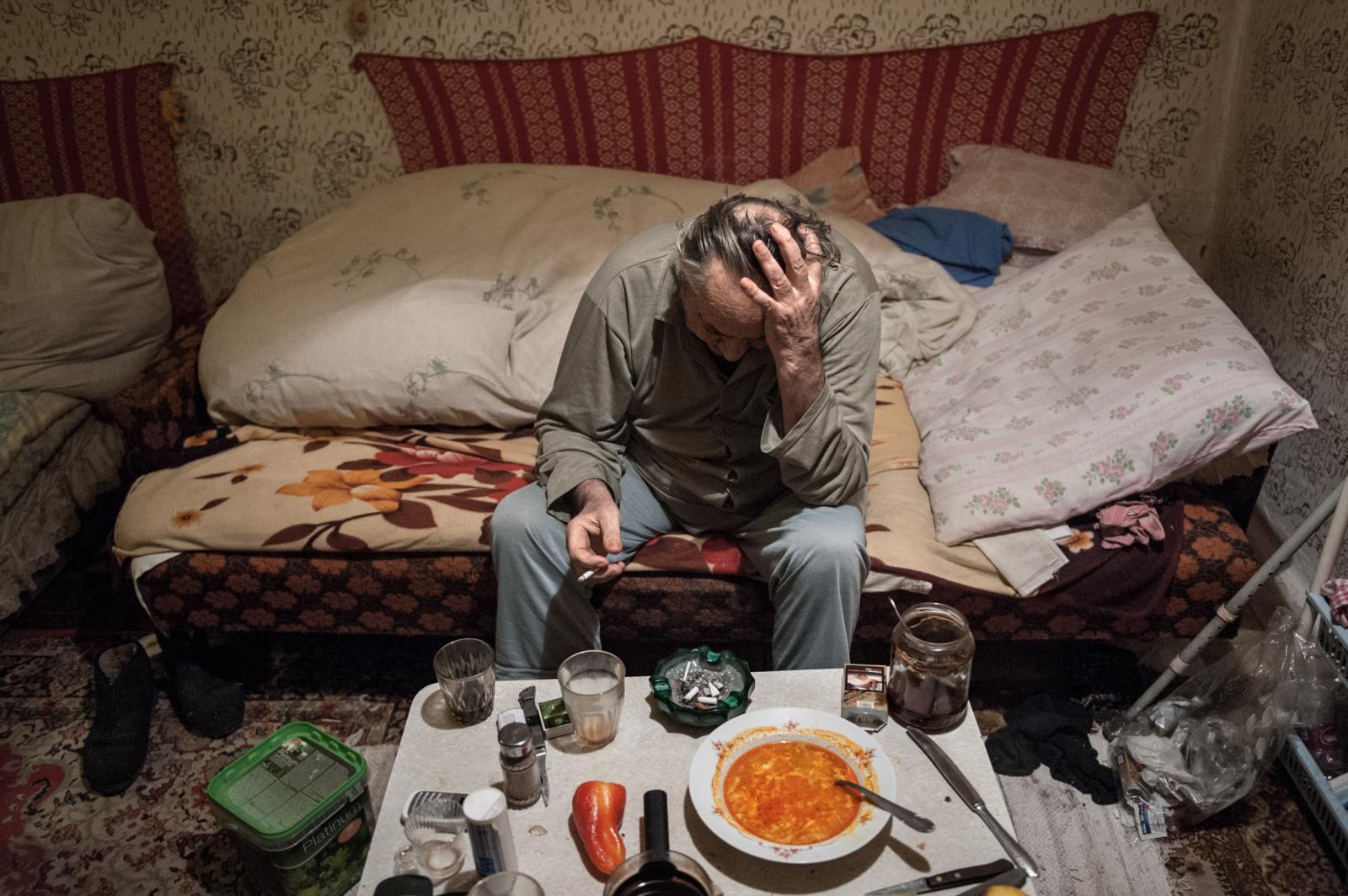 István Kiss in his home that is surrounded by dirt roads in Tömörkény. His disability pension is 140 Euros. István passed away two years ago. 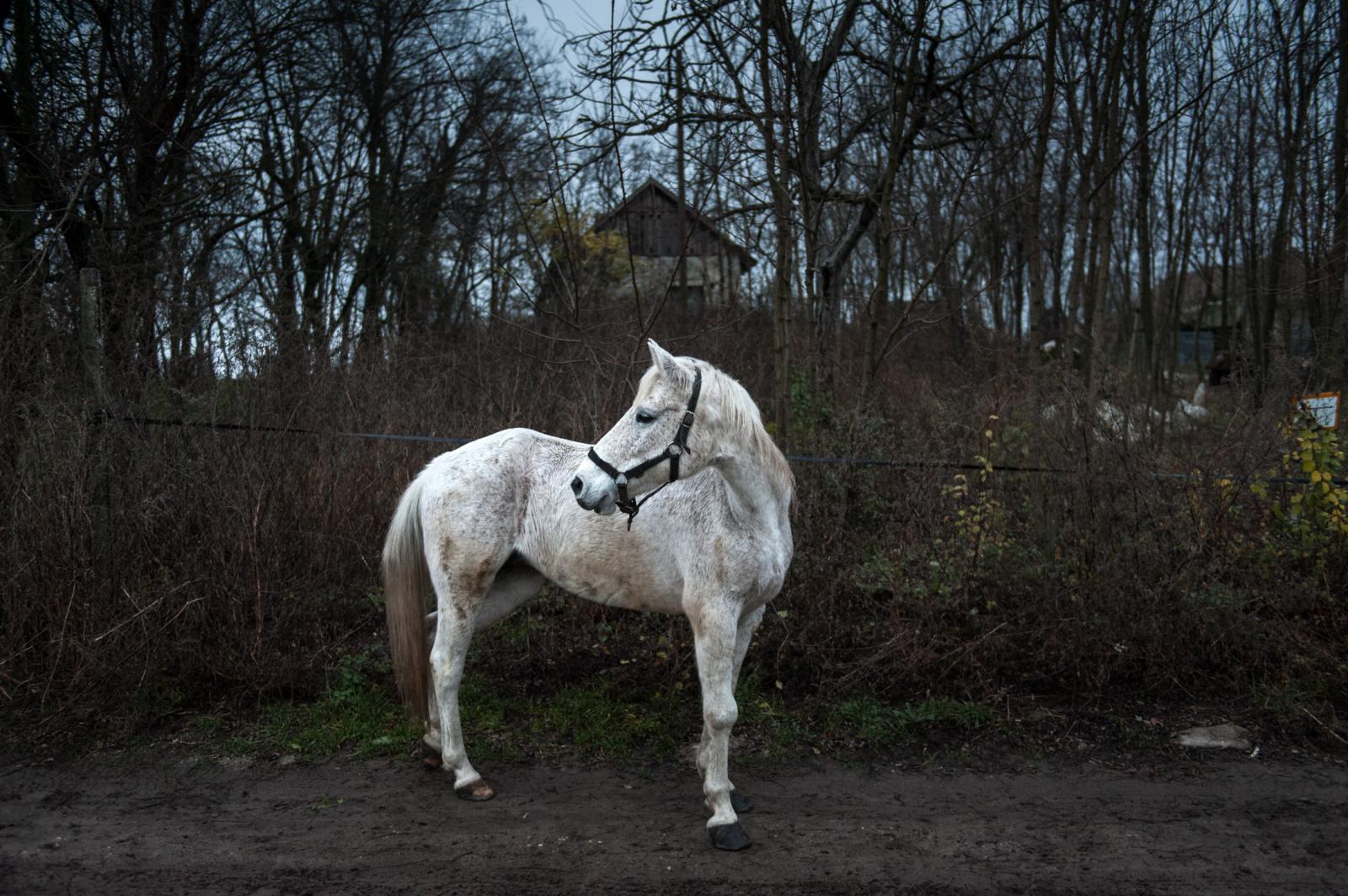 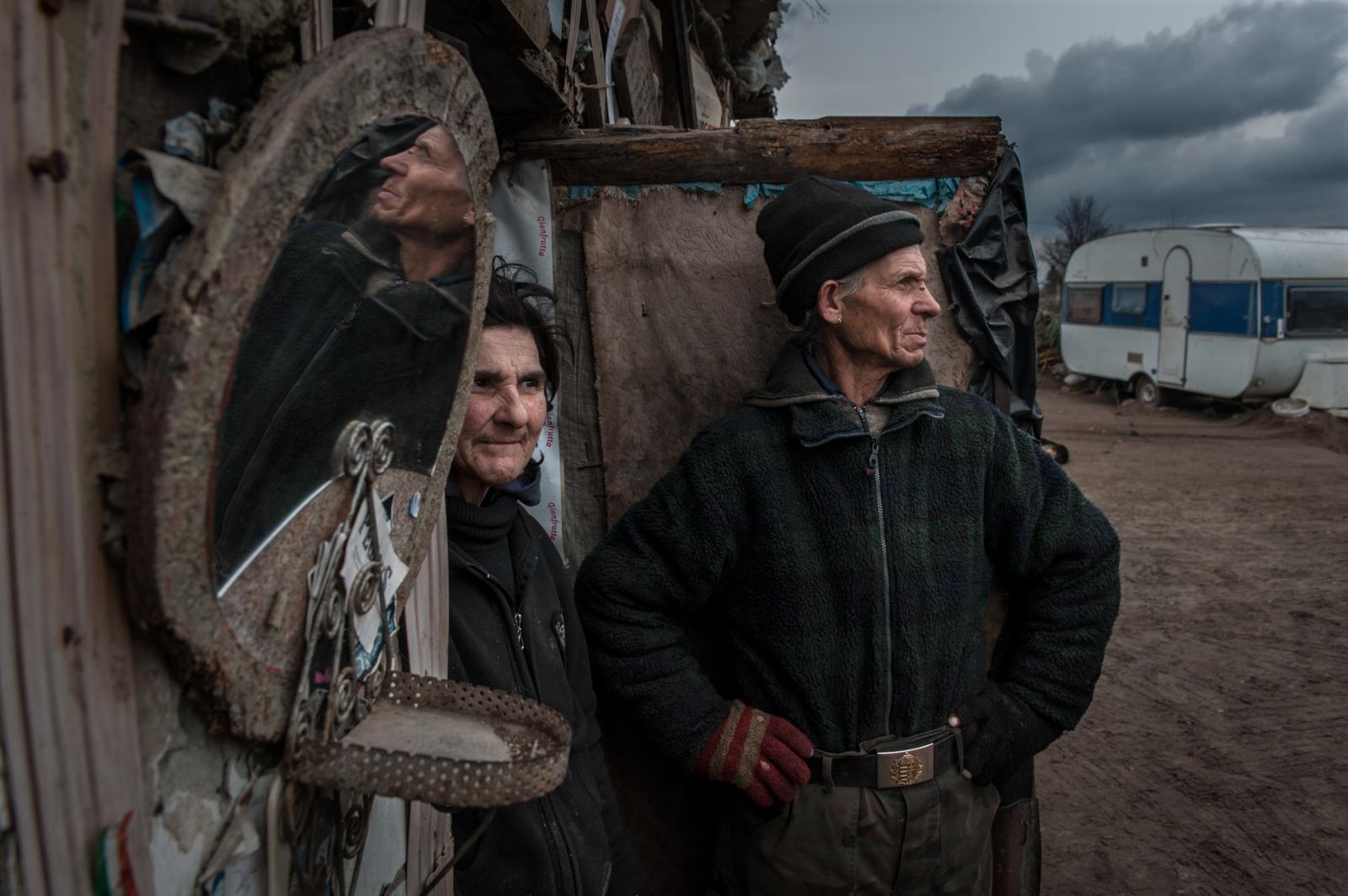 József and his wife in front of their hut. The pair built an own hut after many years of the homelessness in Tiszaföldvár. 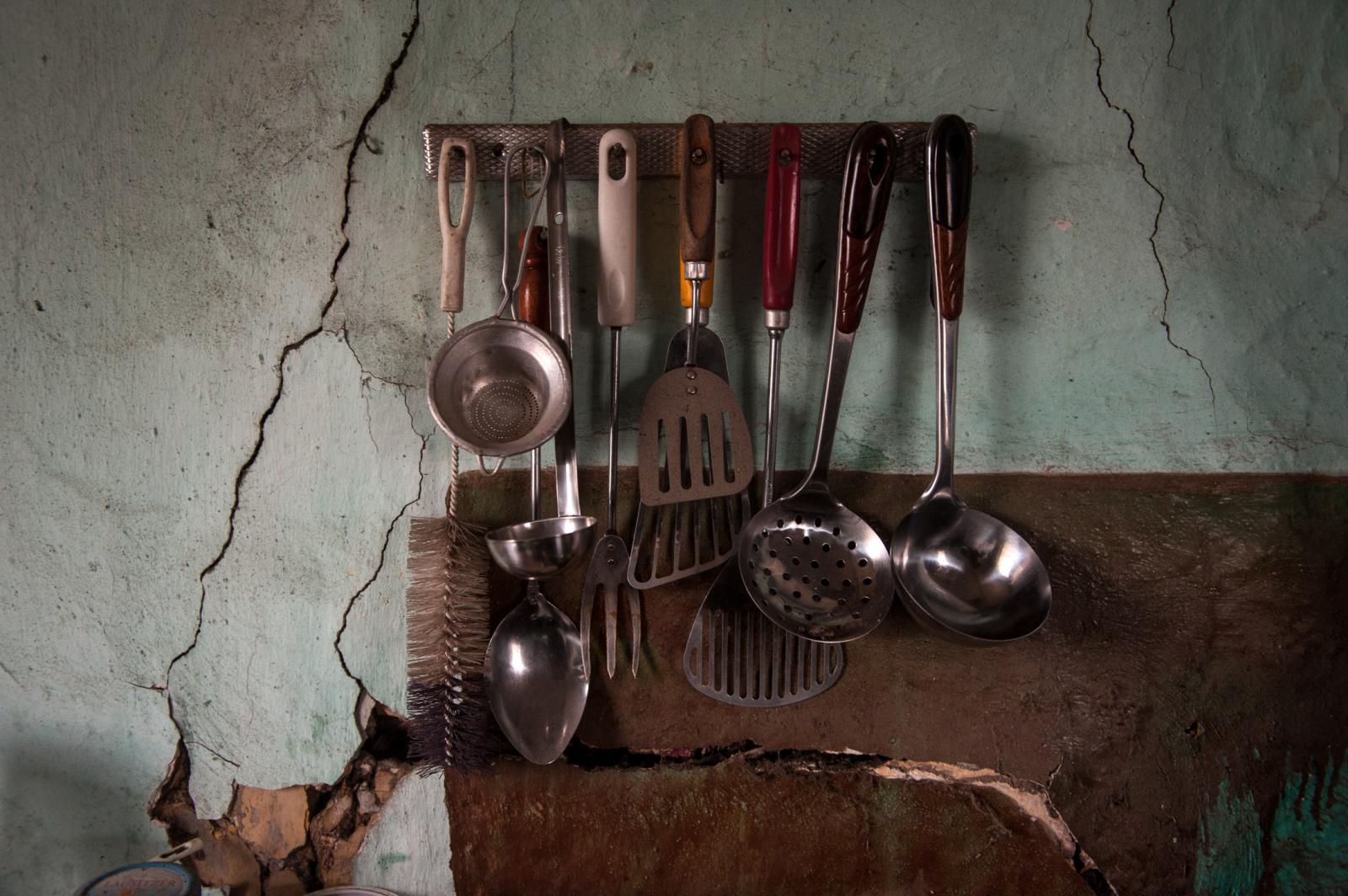 The wall of Lajos Kovács’ house. Most of those living in “Mud Country” have great difficulties maintaining their house. 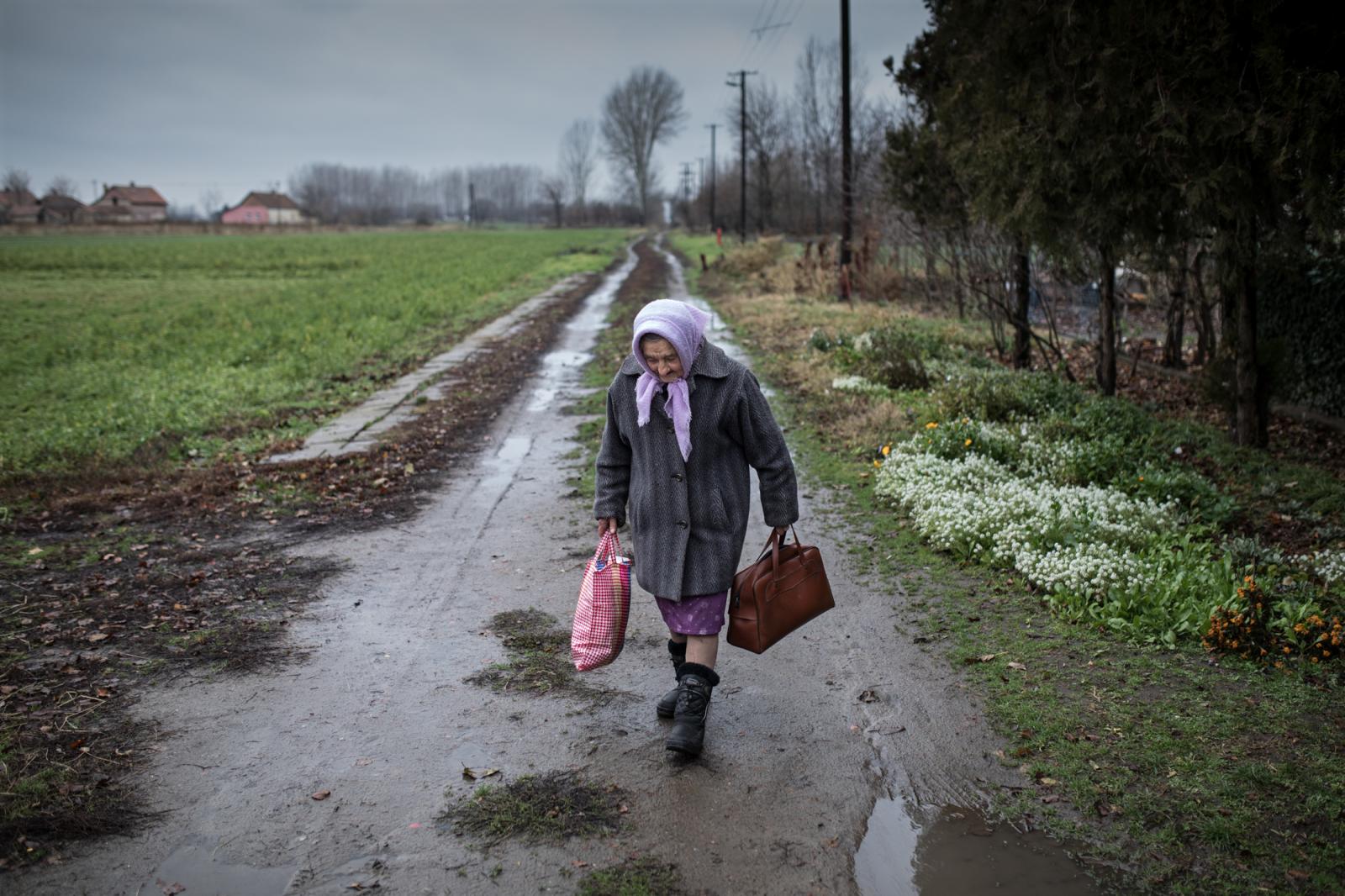 Anna Sebők walks in front of her house at Csanytelek. She has been living here for the past 58 years. The majority of the youth move to nearby cities as soon as they can, resulting in a relatively high number of people living alone in “Mud Country”. 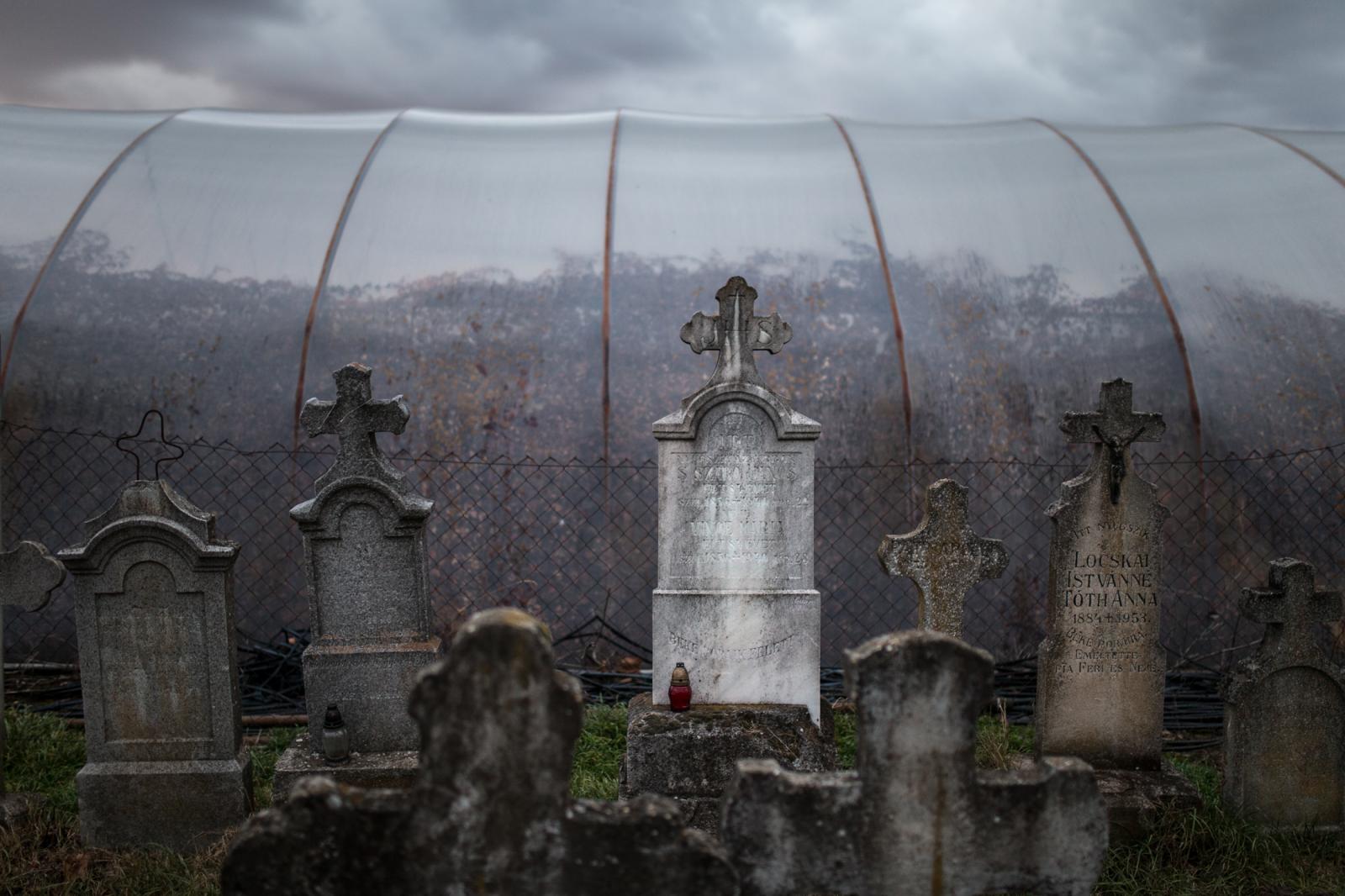 Old gravestones stand near the cemetery of Csanytelek. 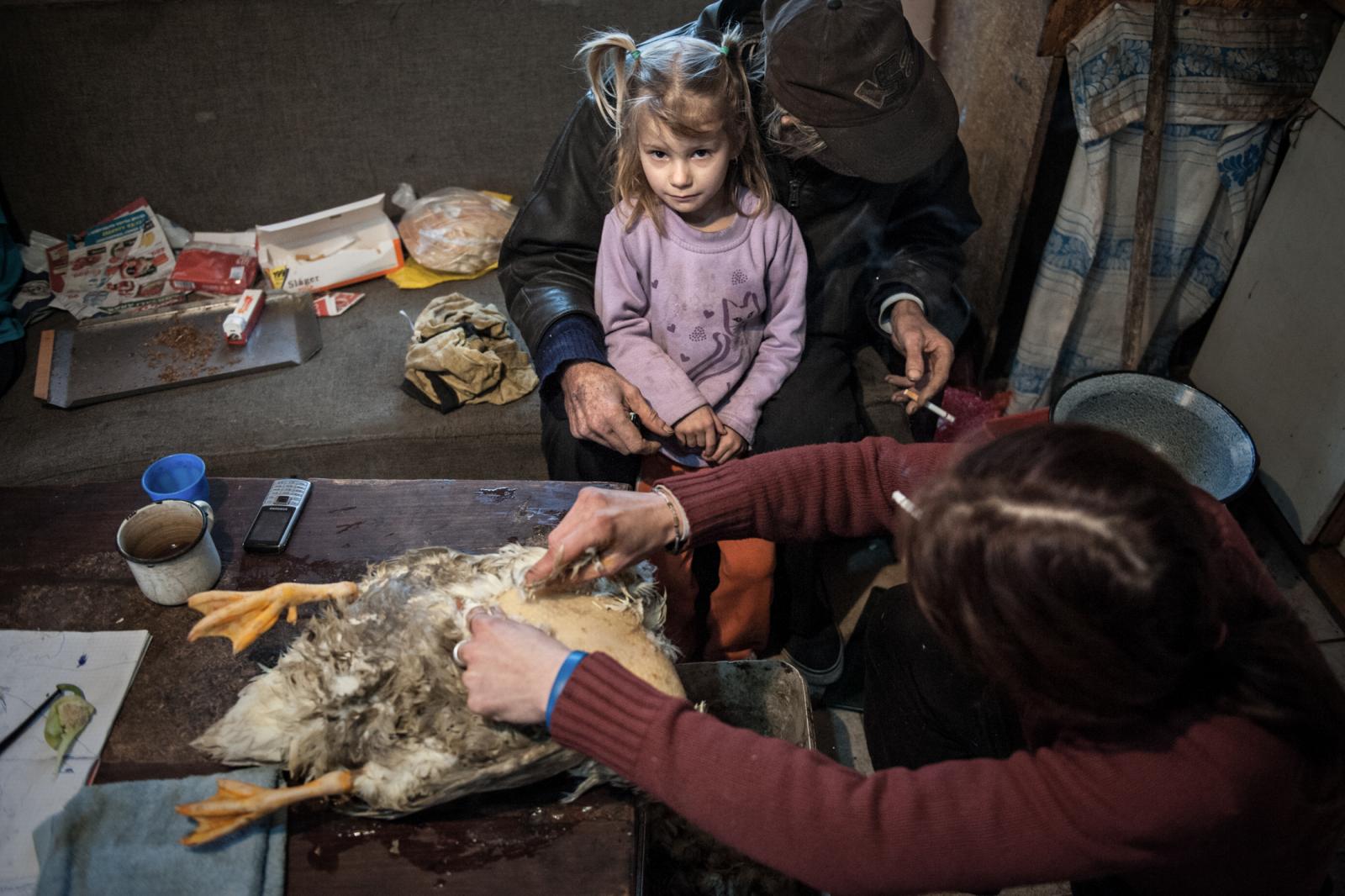 Luca lives with his mother and grandfather in their home in Csanytelek, Csongrád County together with her five brothers. According to the latest data almost half of young children live in poverty in Hungary. 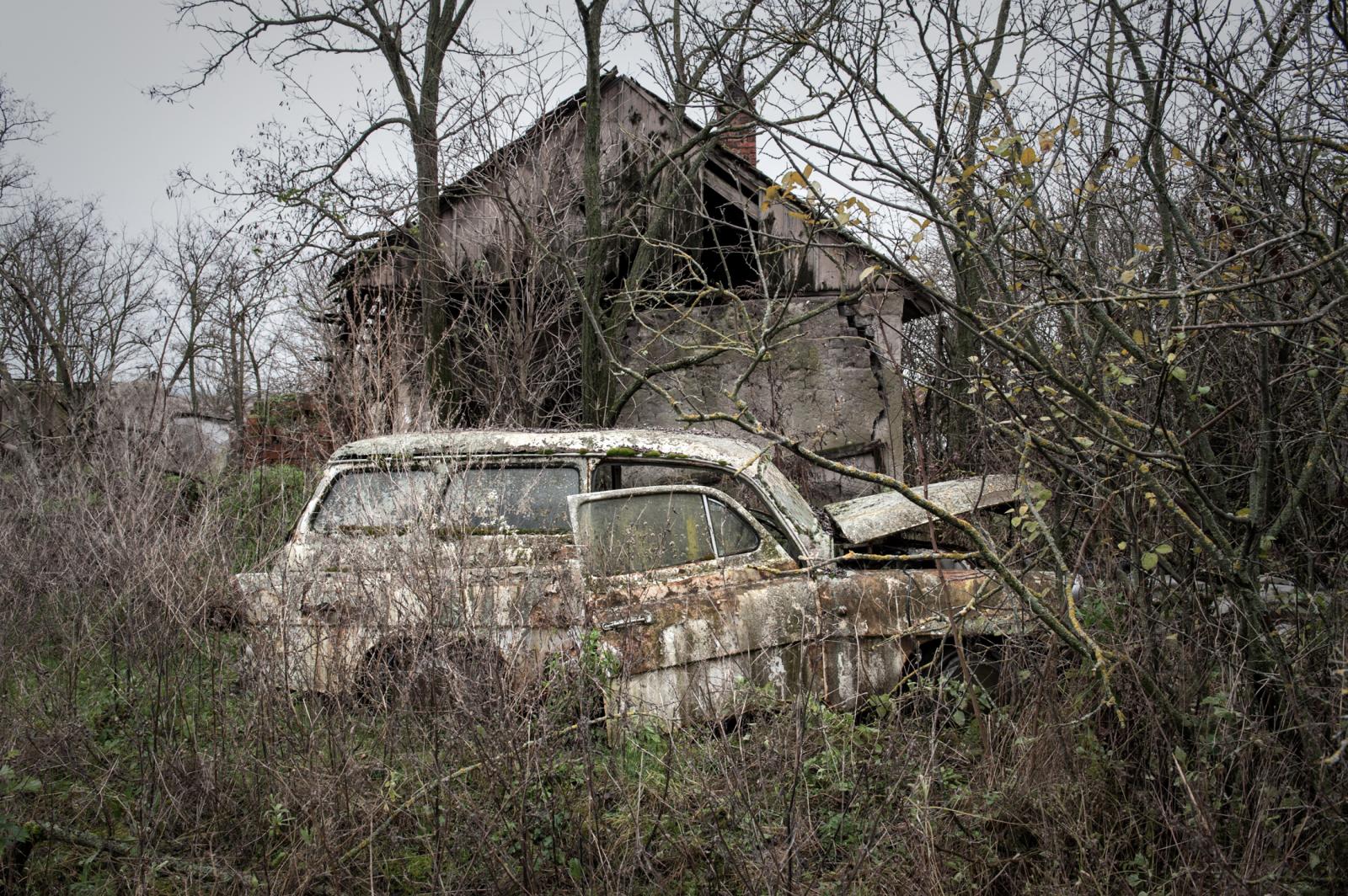 People living along the dirty roads say everything gets destroyed in the mud. The house, the car, the bikes and even the footwear. 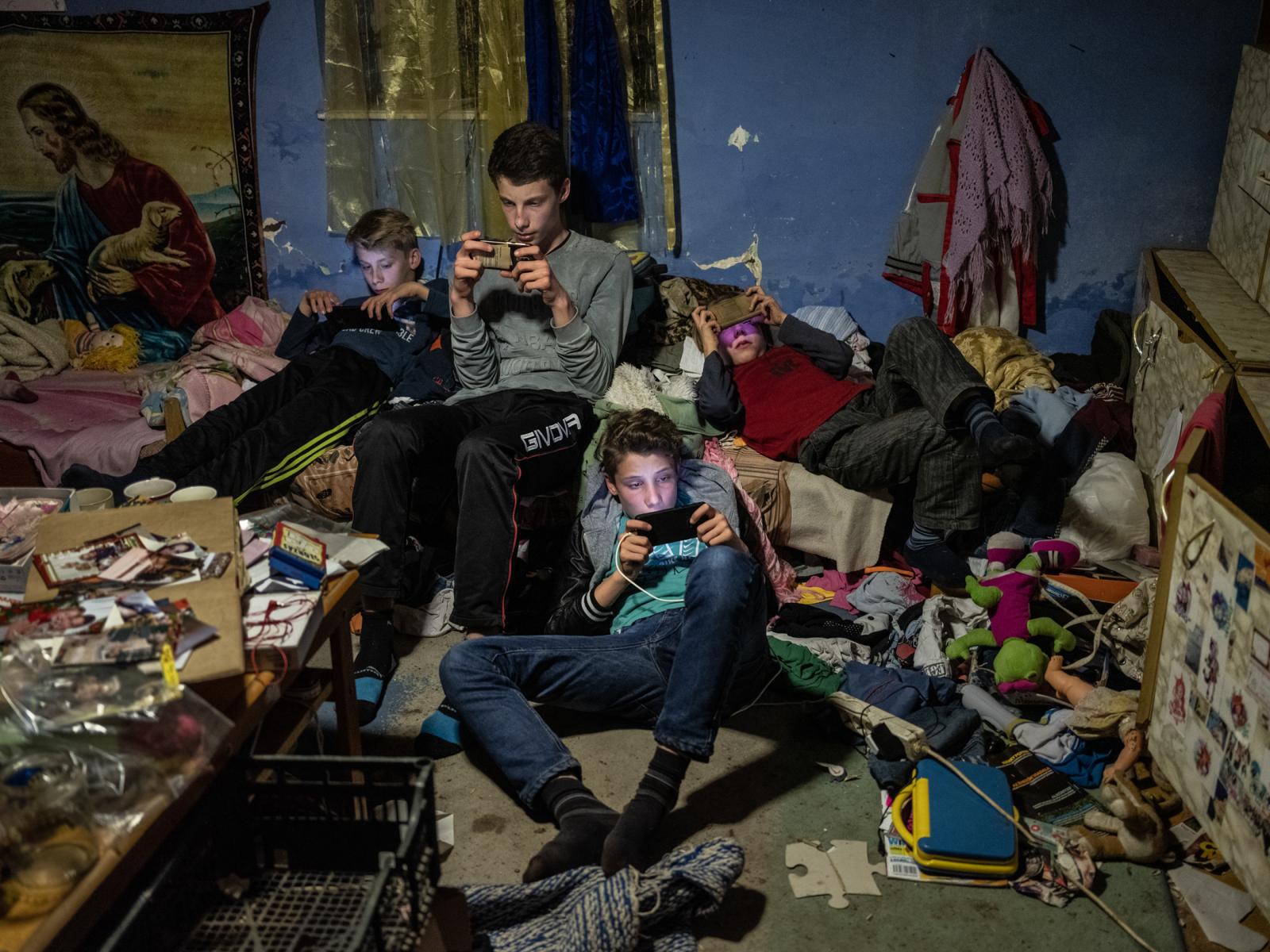 The Borsos boys play games on their mobile phones in their living room. 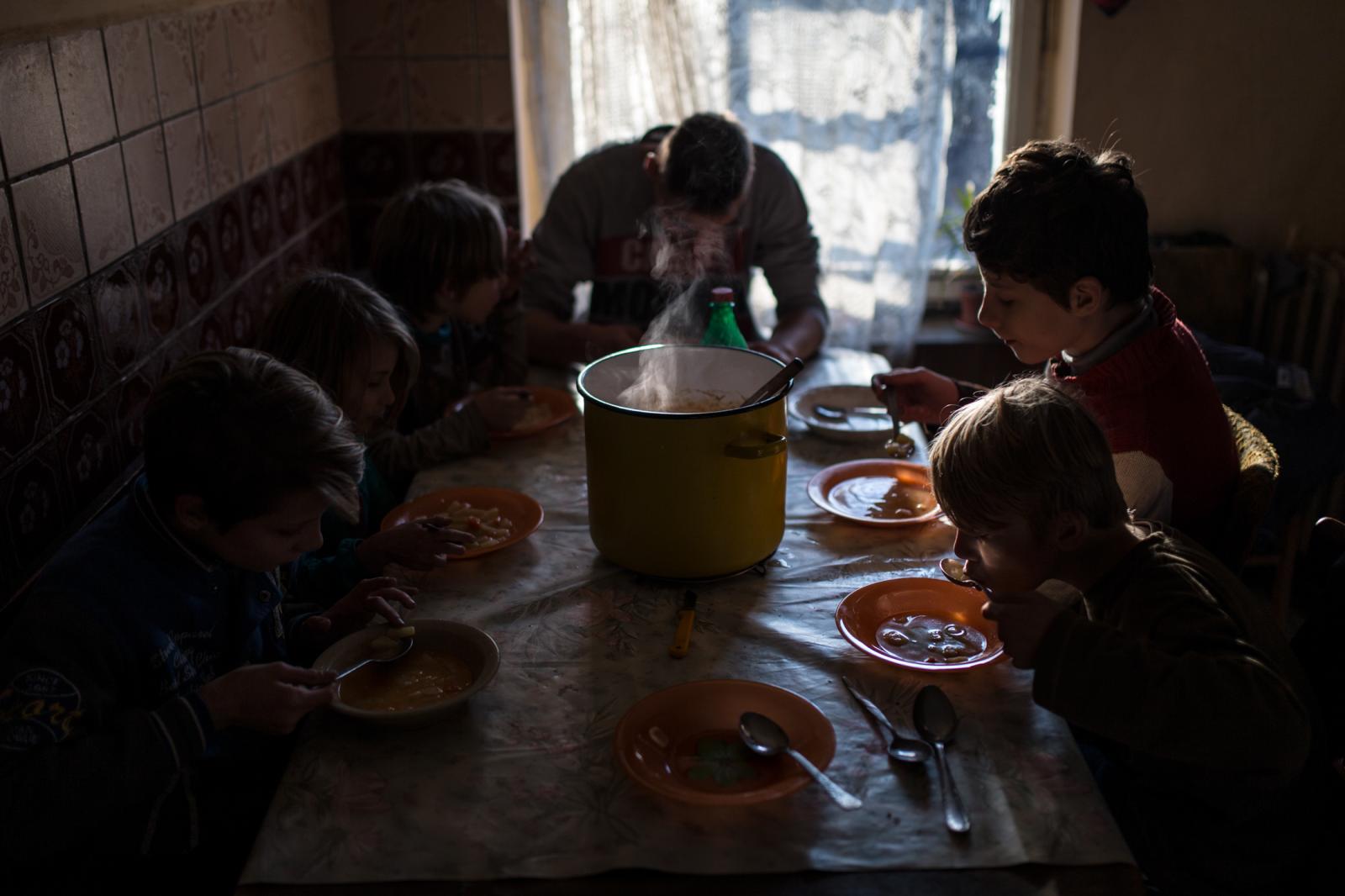 Lunch at the Borsos’. Mária and József raise 6 children. 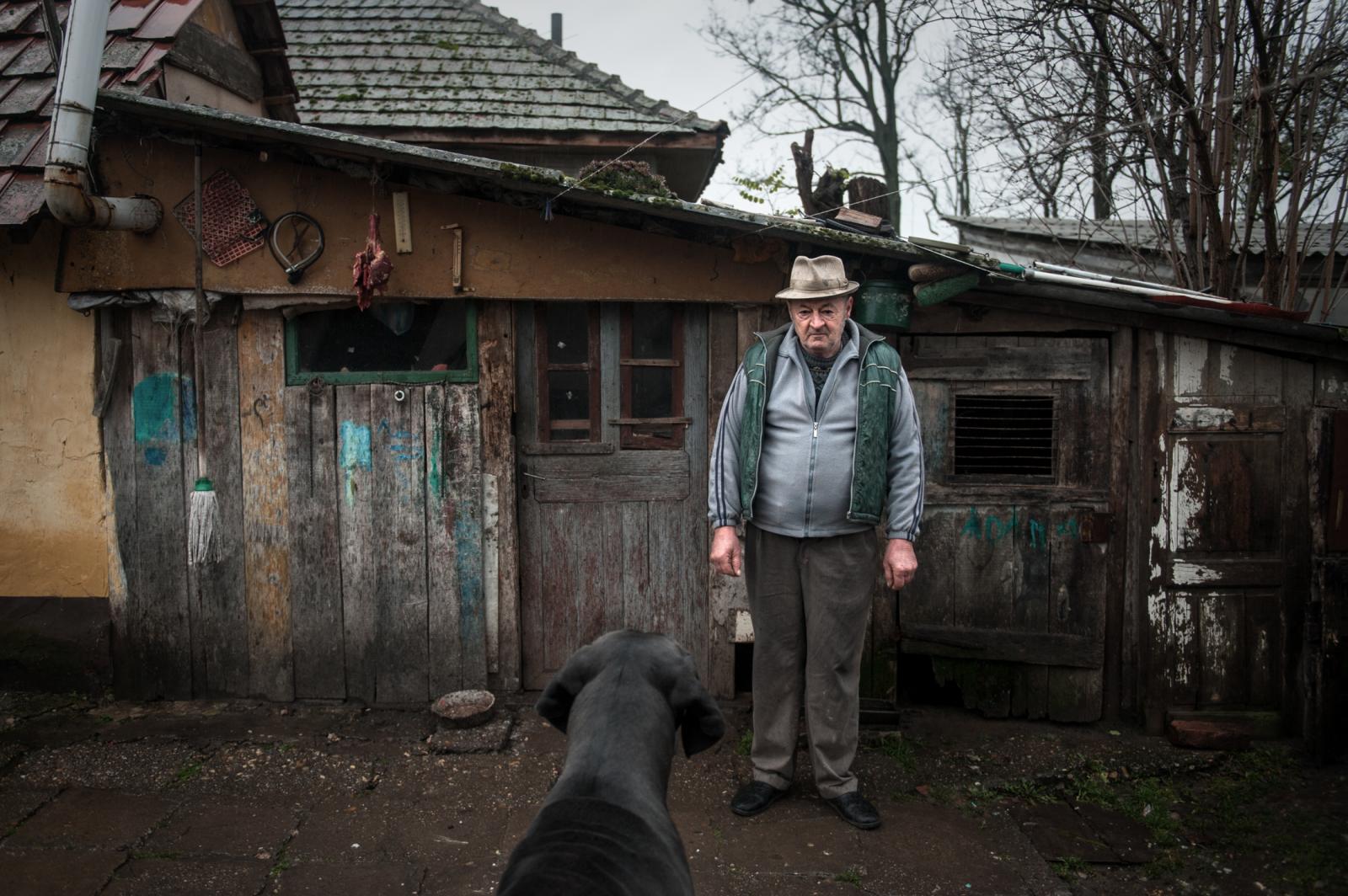 János poses with his dog at his farm in Csanytelek, Csongrád country. For the people who live along and near dirts road mud is a constant problem, just as well walking and getting around in mud. 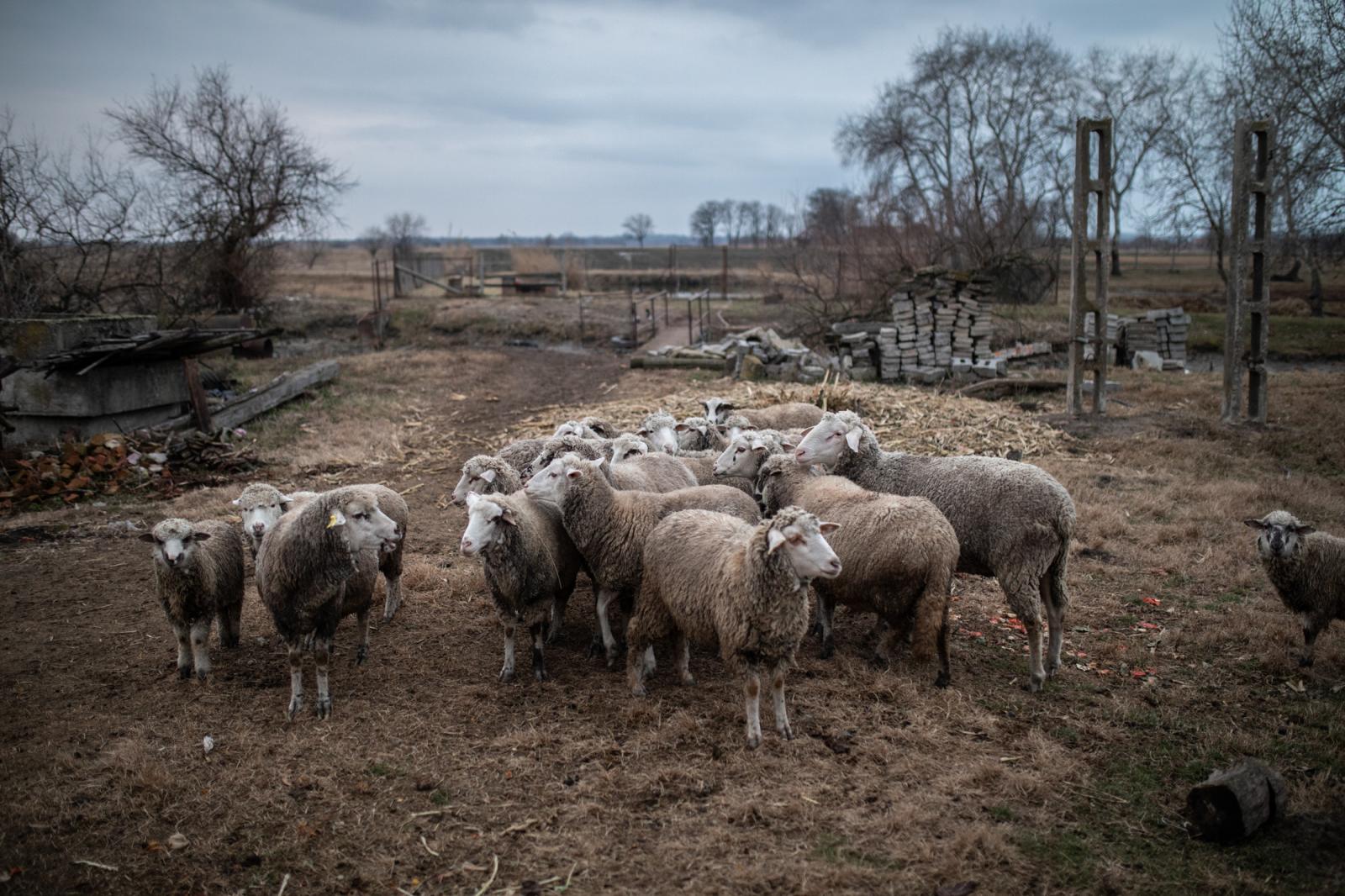 Only a few families of “Mud Country” can afford to have livestock. 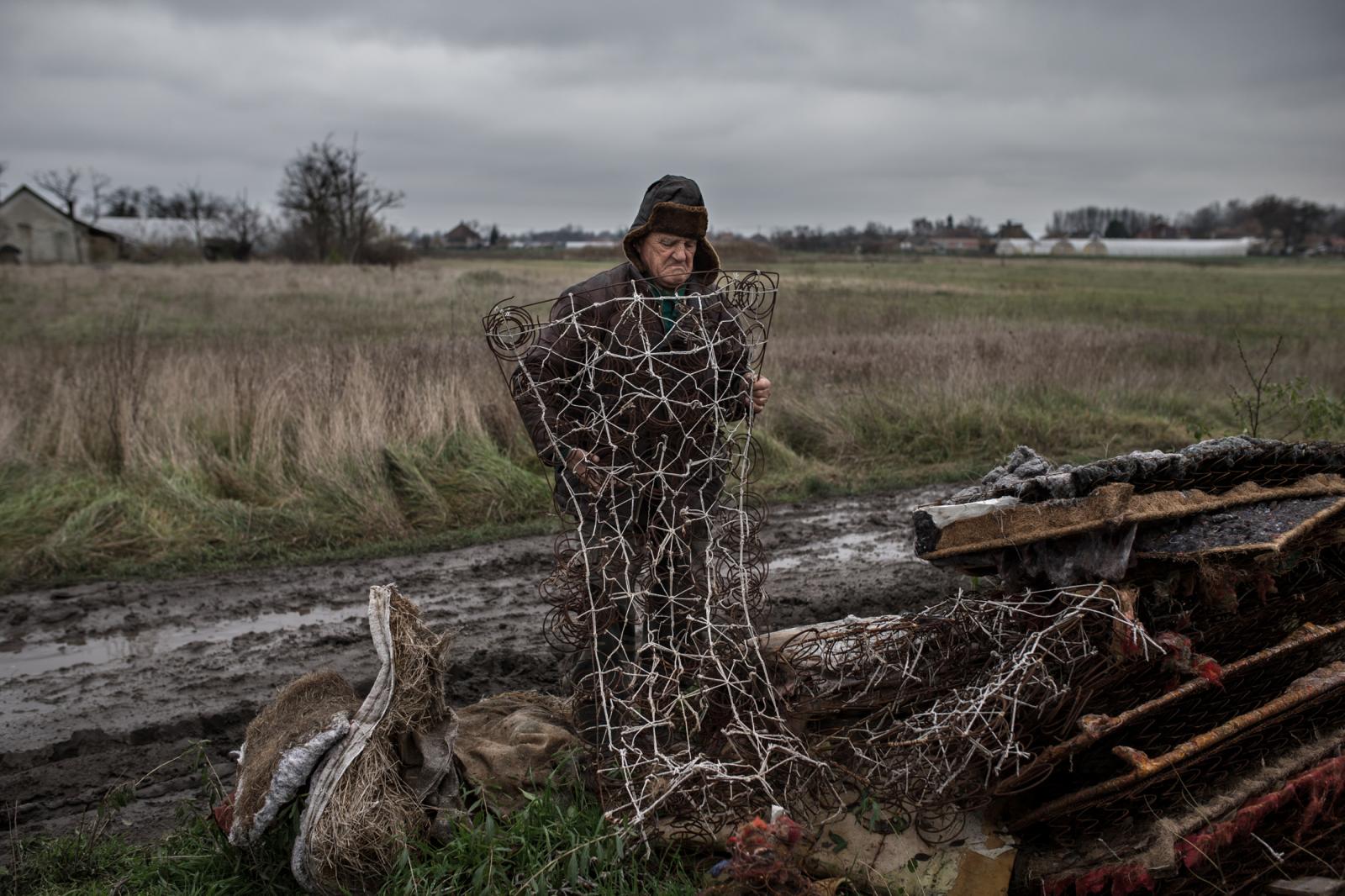 Lajos Kovács of Csanytelek at the forefront of his house, selecting springs of mattresses for selling them as metal waste. Besides poverty the village struggles with the inconvenience of dirt roads. 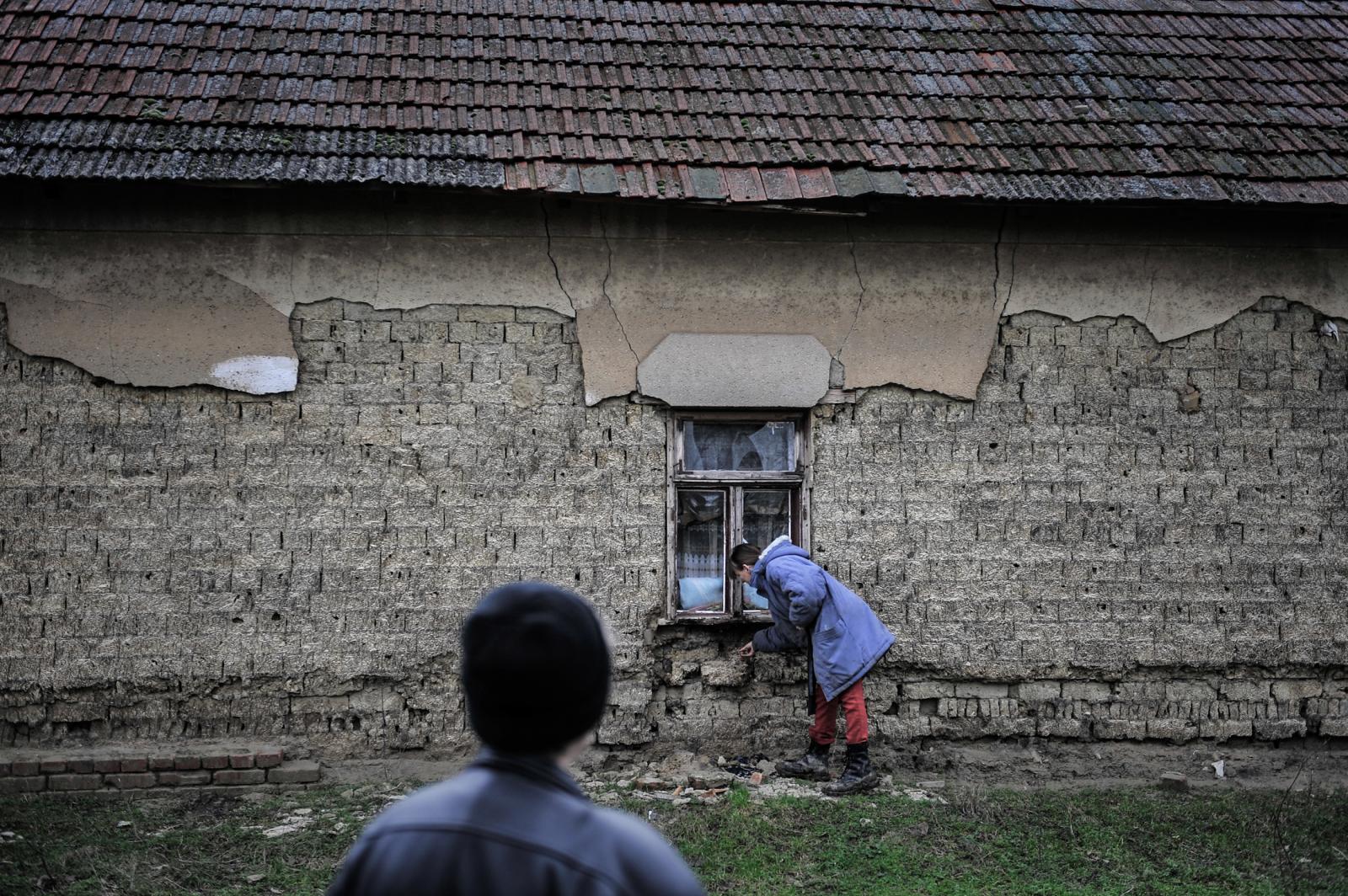 Damage caused by inland waters on the wall of the Darnai family’s house. 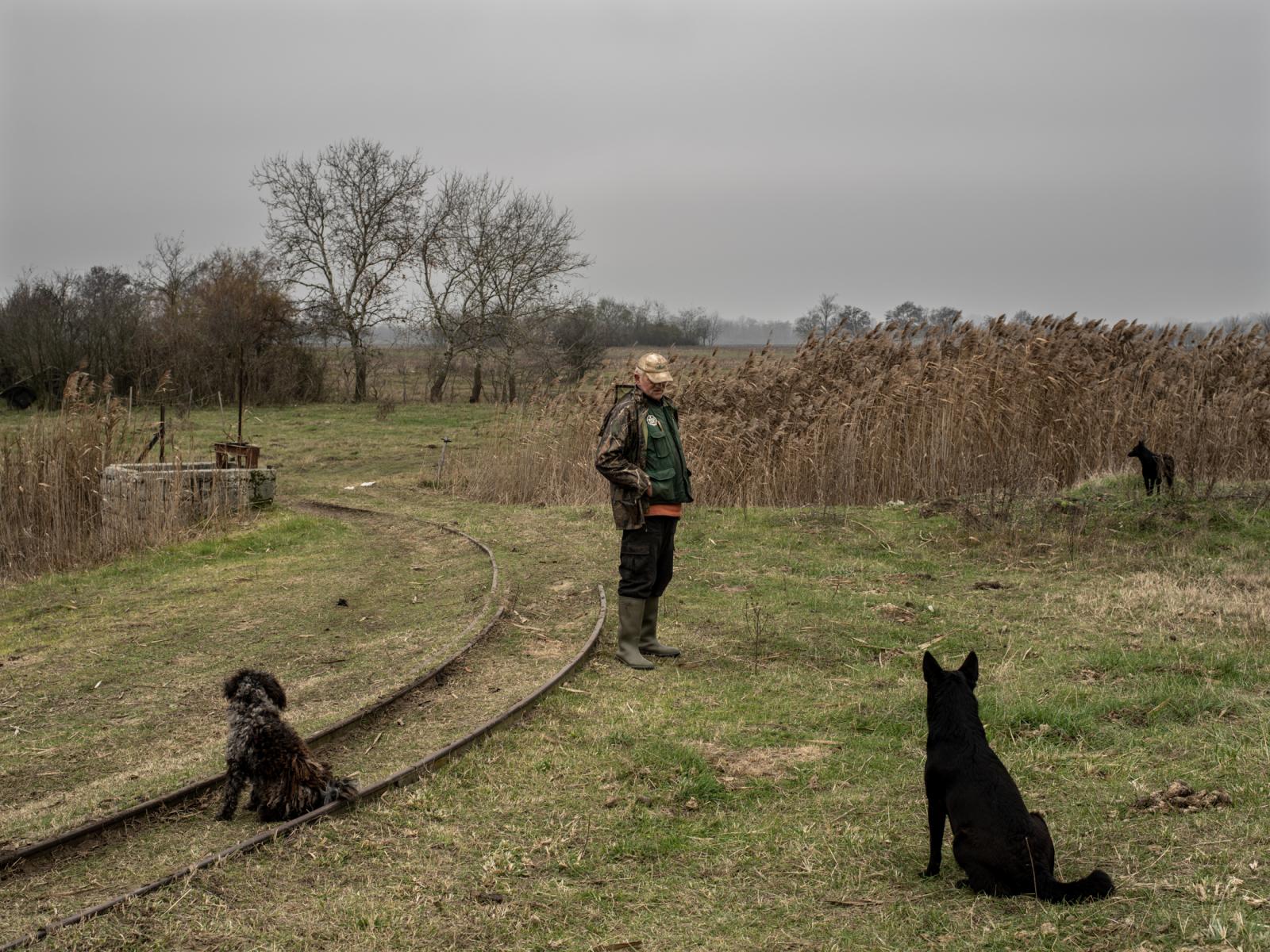 Ferenc Juhász shepherd standing along an abandoned railway-track near the fishing lake of Tömörkény. 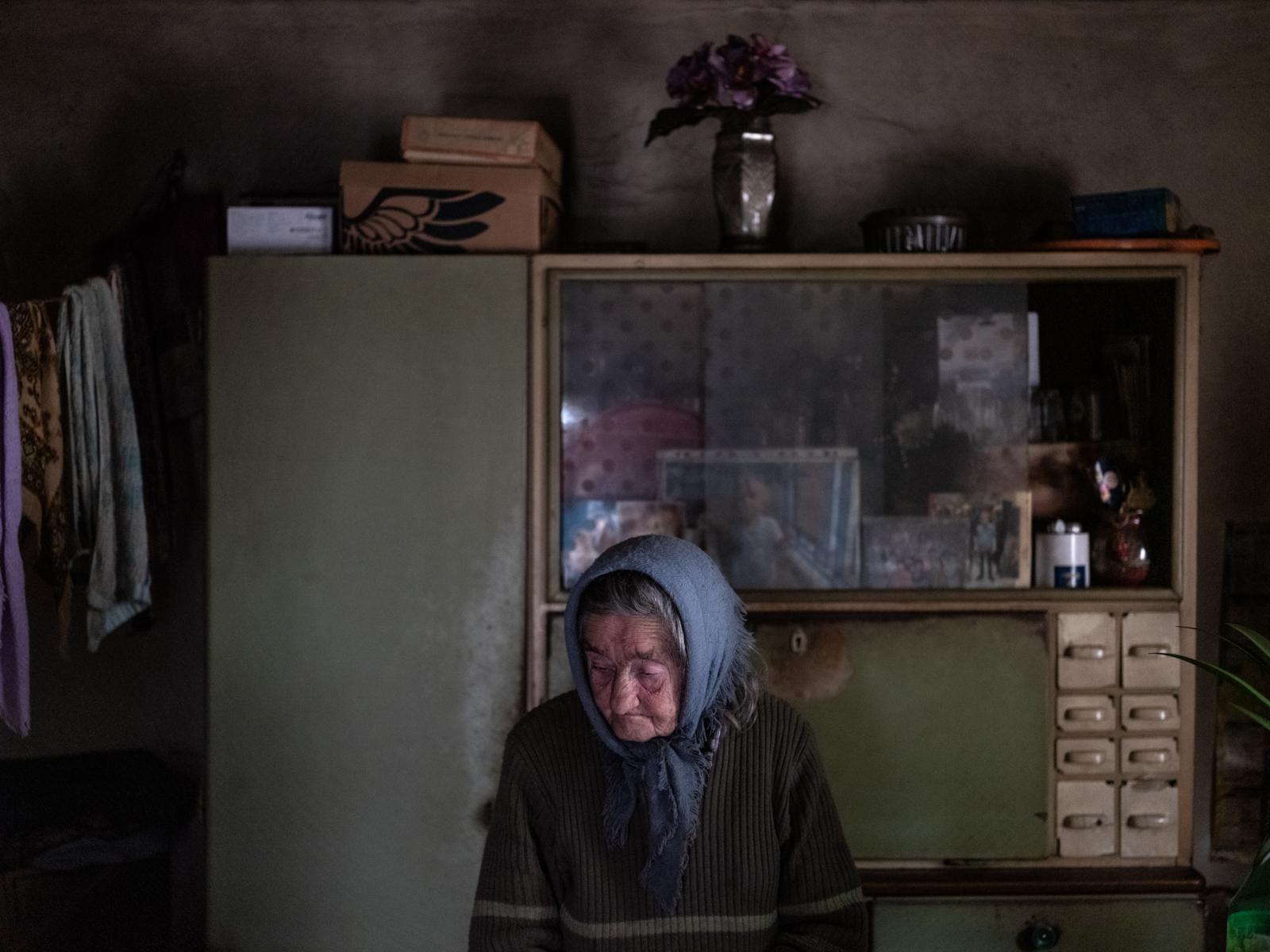 A proportion of persons living alone that is higher in the Hungarian rural environment than in the urban areas. 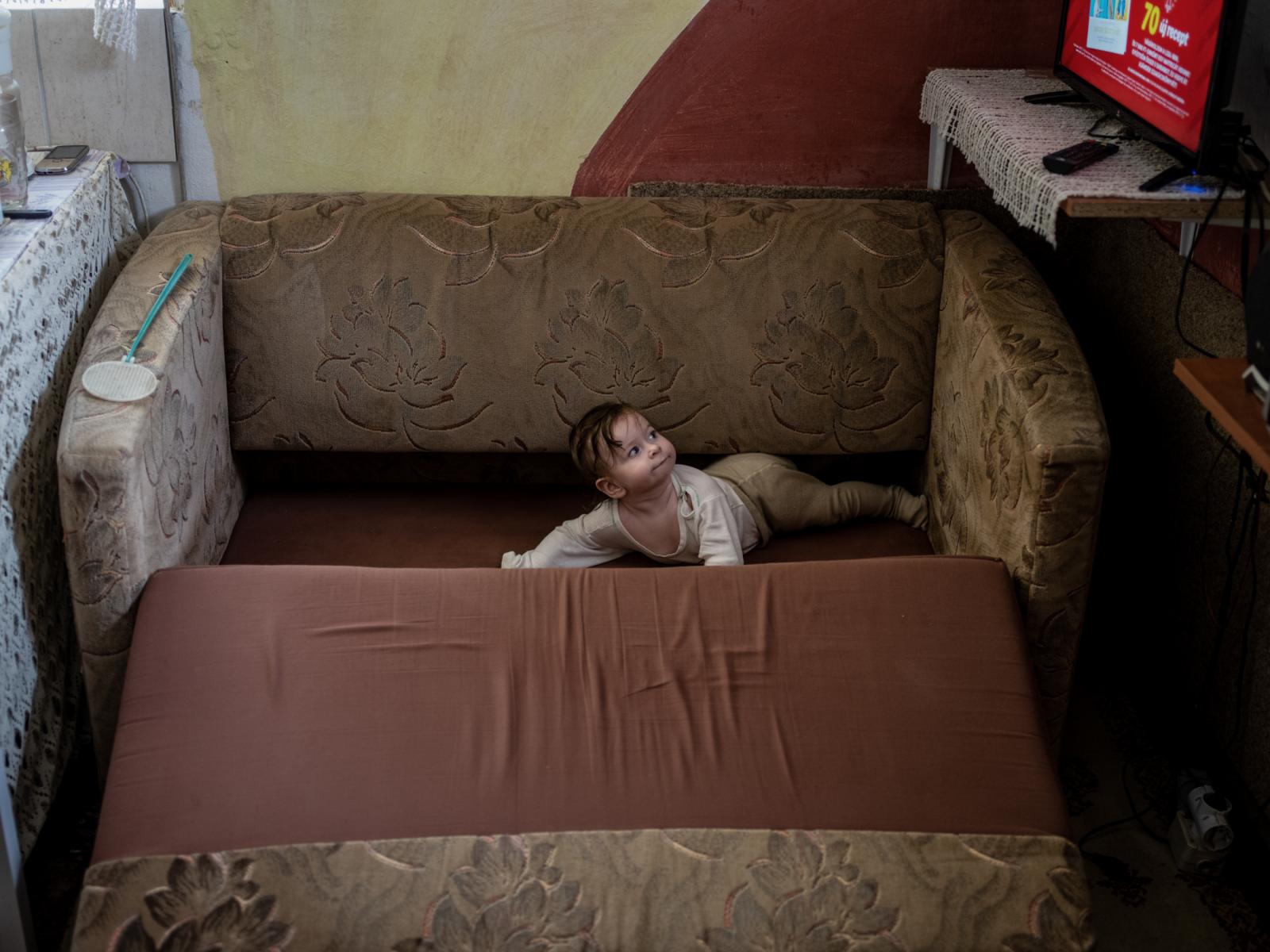 The seven-month-old Erika Patkó lies in her family's living room at their home in Tömörkény. 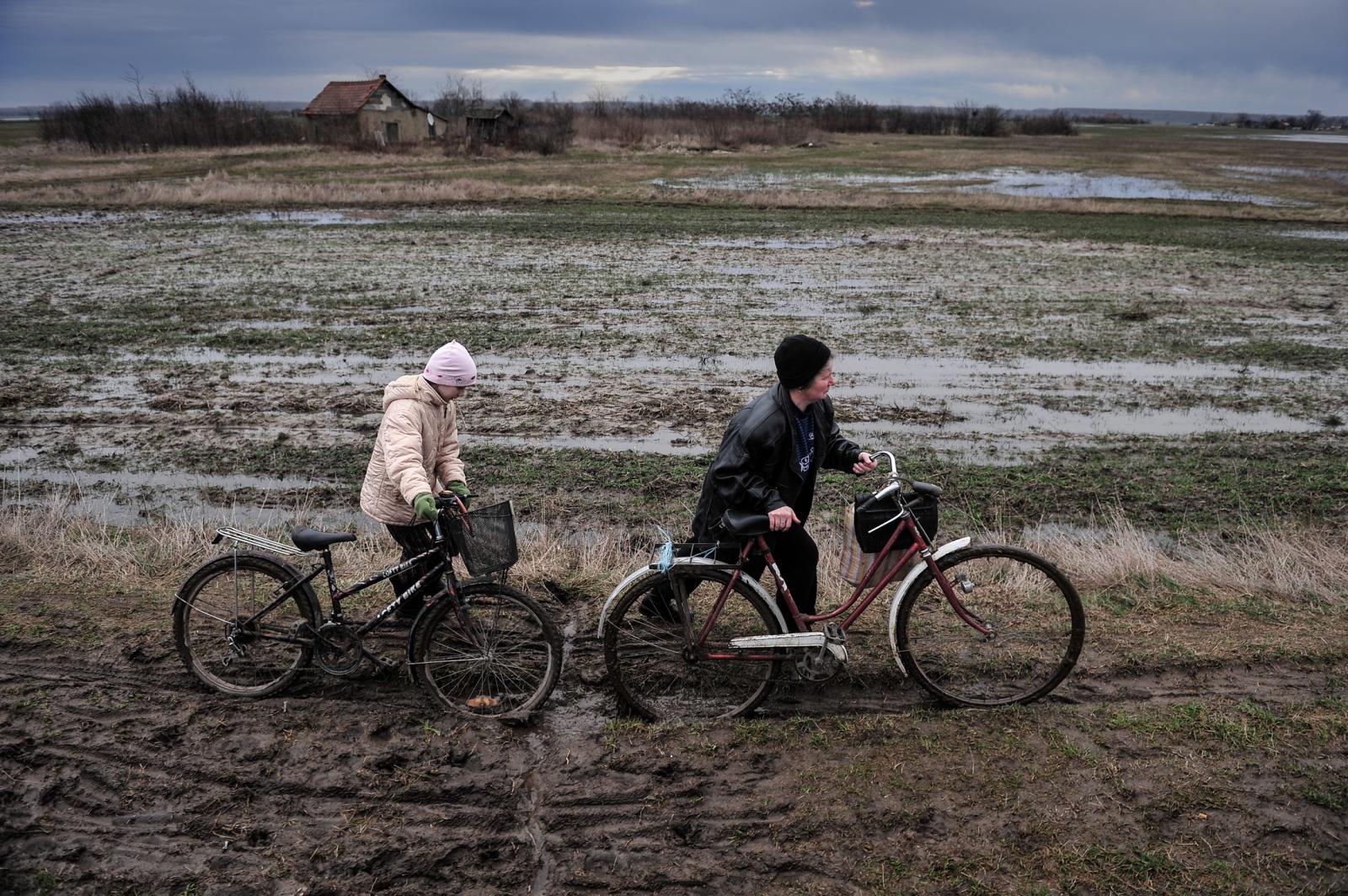 Widowed Balázsne Bende and her daughter Nórika live on a farm, which you can get to along an embankment built from clay. 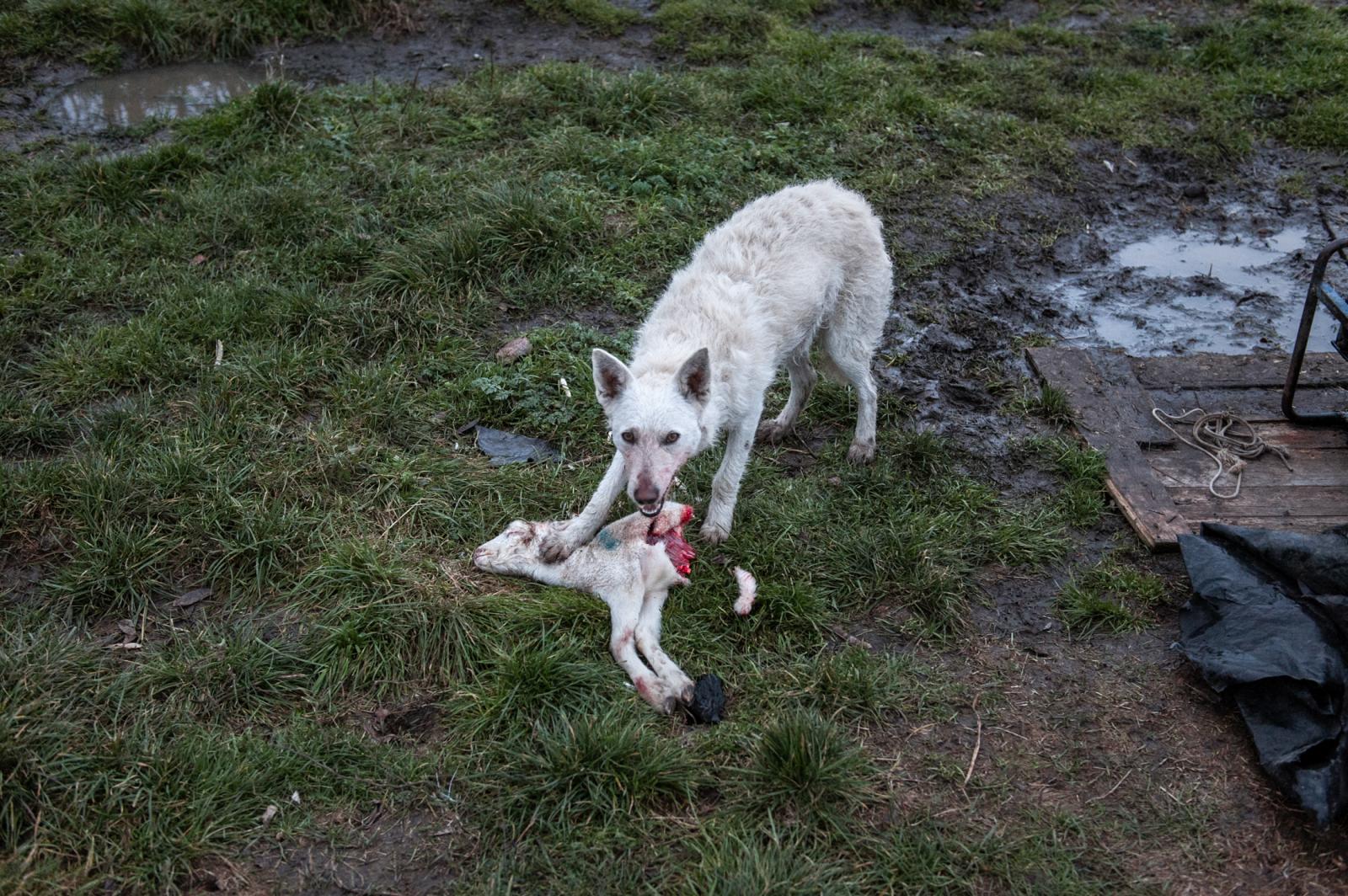 The shepherd dogs usually get to eat the dead lambs on the farmlands of Tomorkeny. 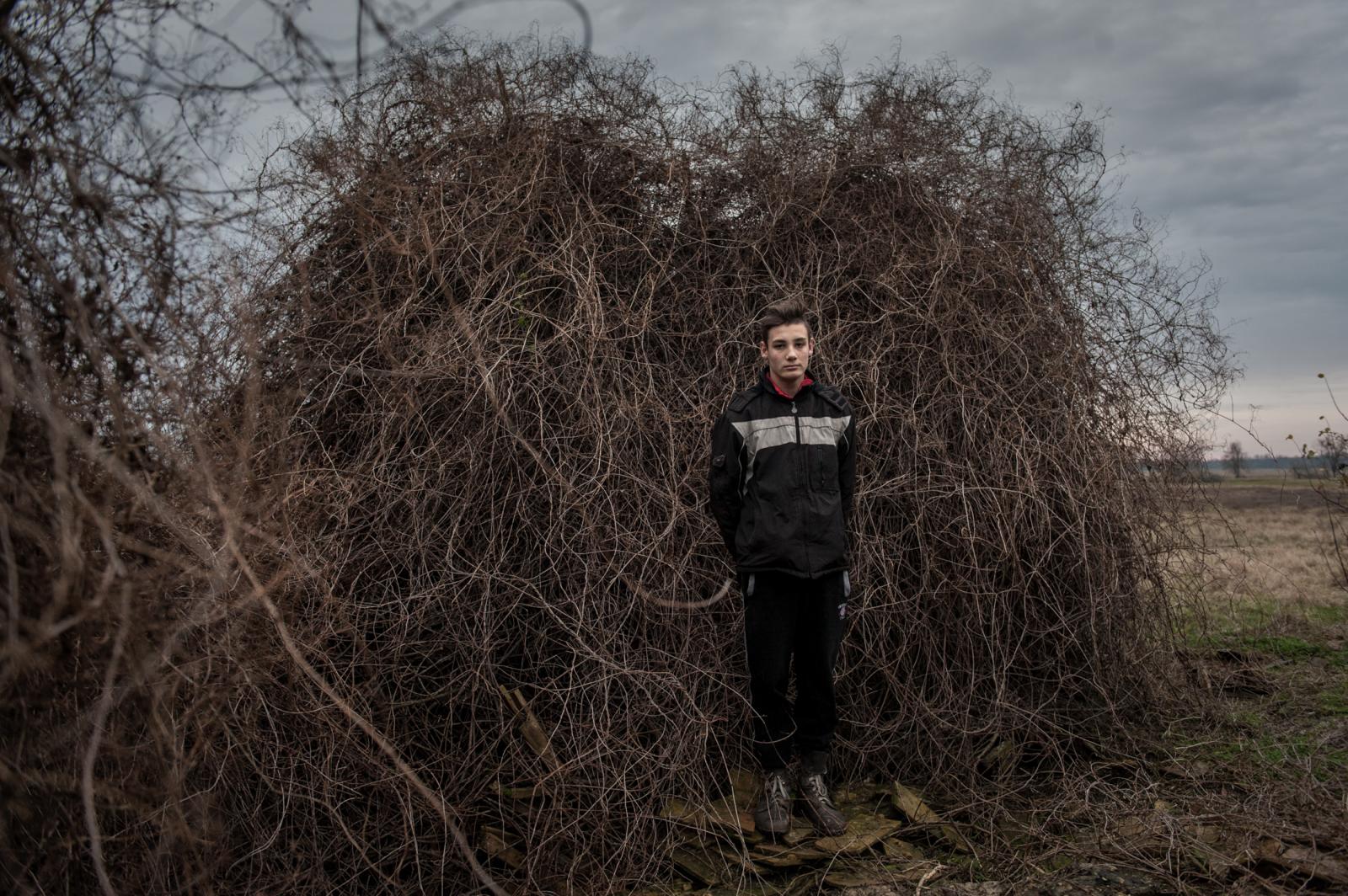 The 15-year-old Zsolt poses at his father’s farm near a farm settlement, Tomorkeny. 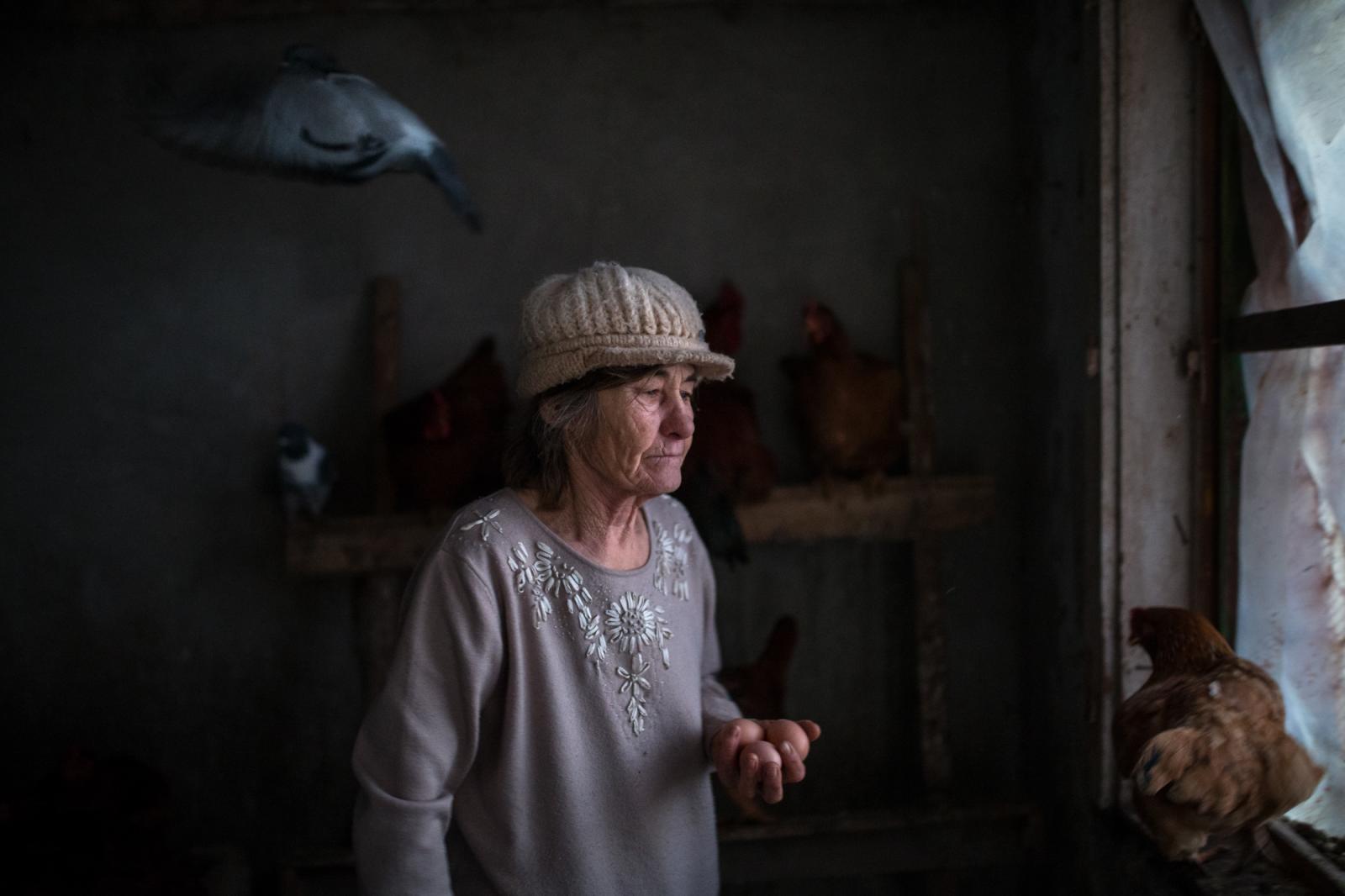 Ilona is a public worker. The only other source of income for their family is her husband’s invalidity benefits of 145 Euros per month. Living on a paid job is almost impossible and eventually seems beyond hope for most of the poor. Ilona passed away two years ago. 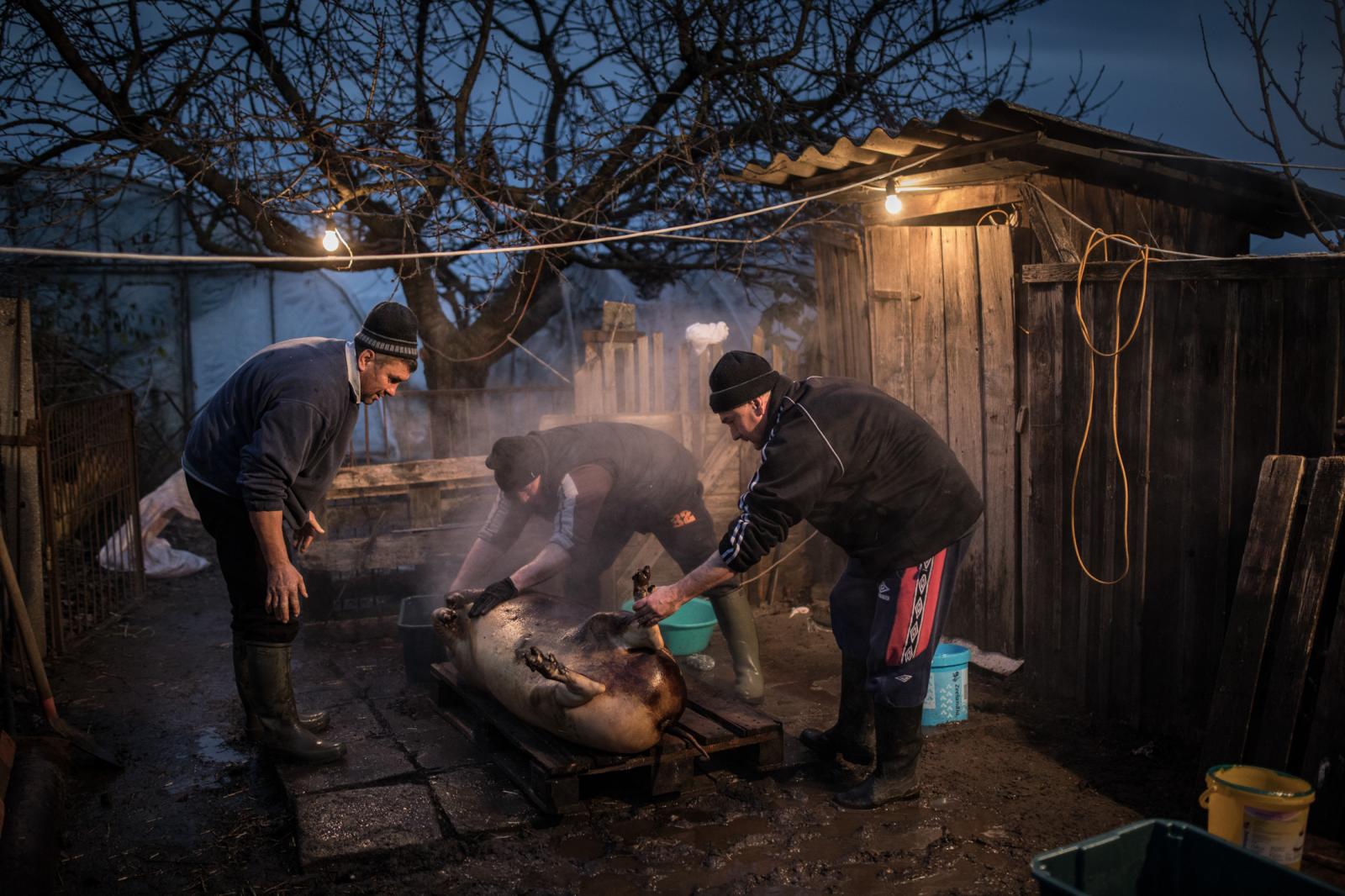 Pig slaughter at Csanytelek. Pig slaughter is an old tradition in Eastern Europe and it is still a frequent event in the countryside in winter. 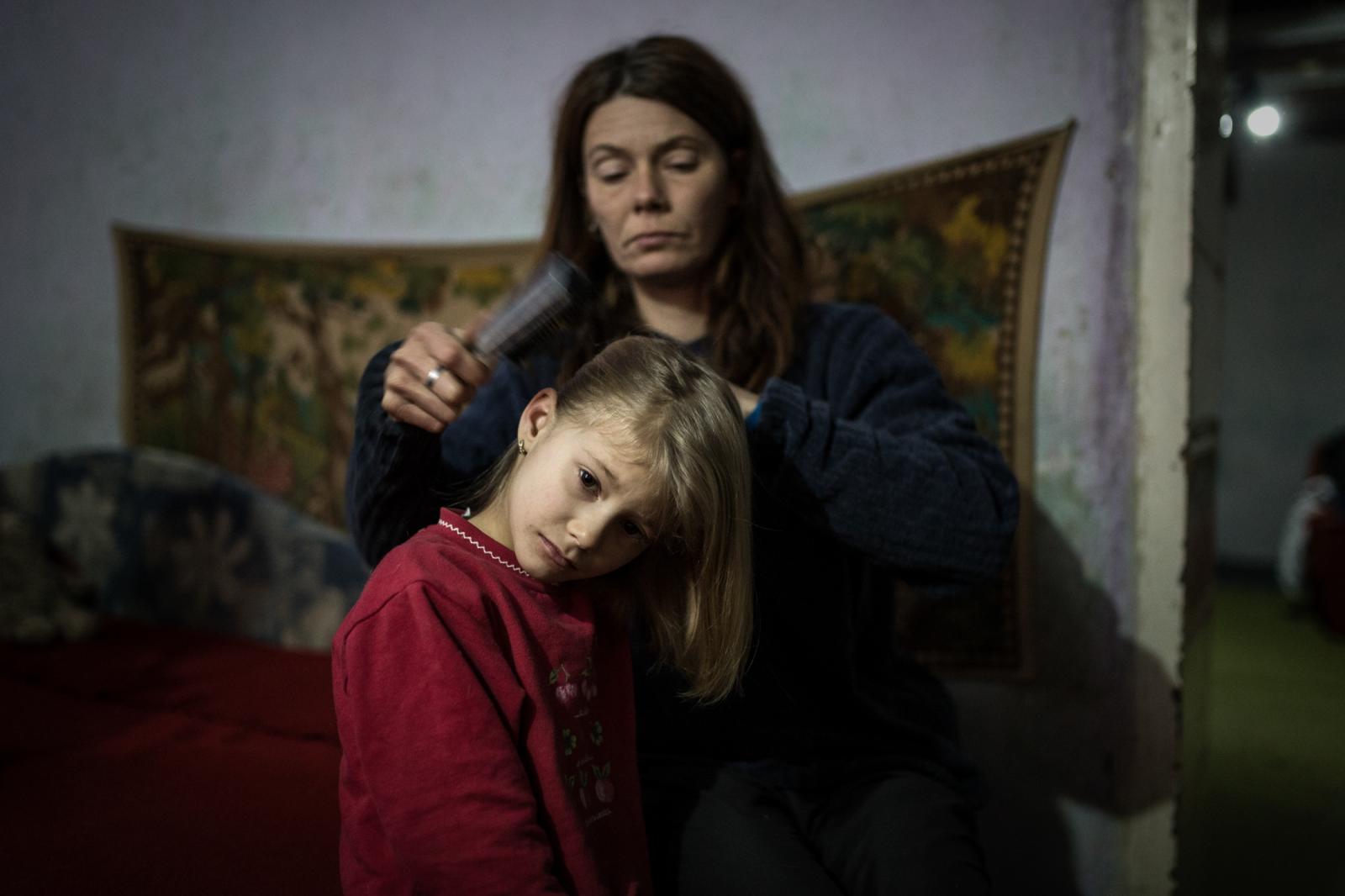 Mária and her daughter, Luca preparing for school early in the morning. Most of the families of “Mud Country” must spend almost all their income for raising the children and covering their most basic needs. 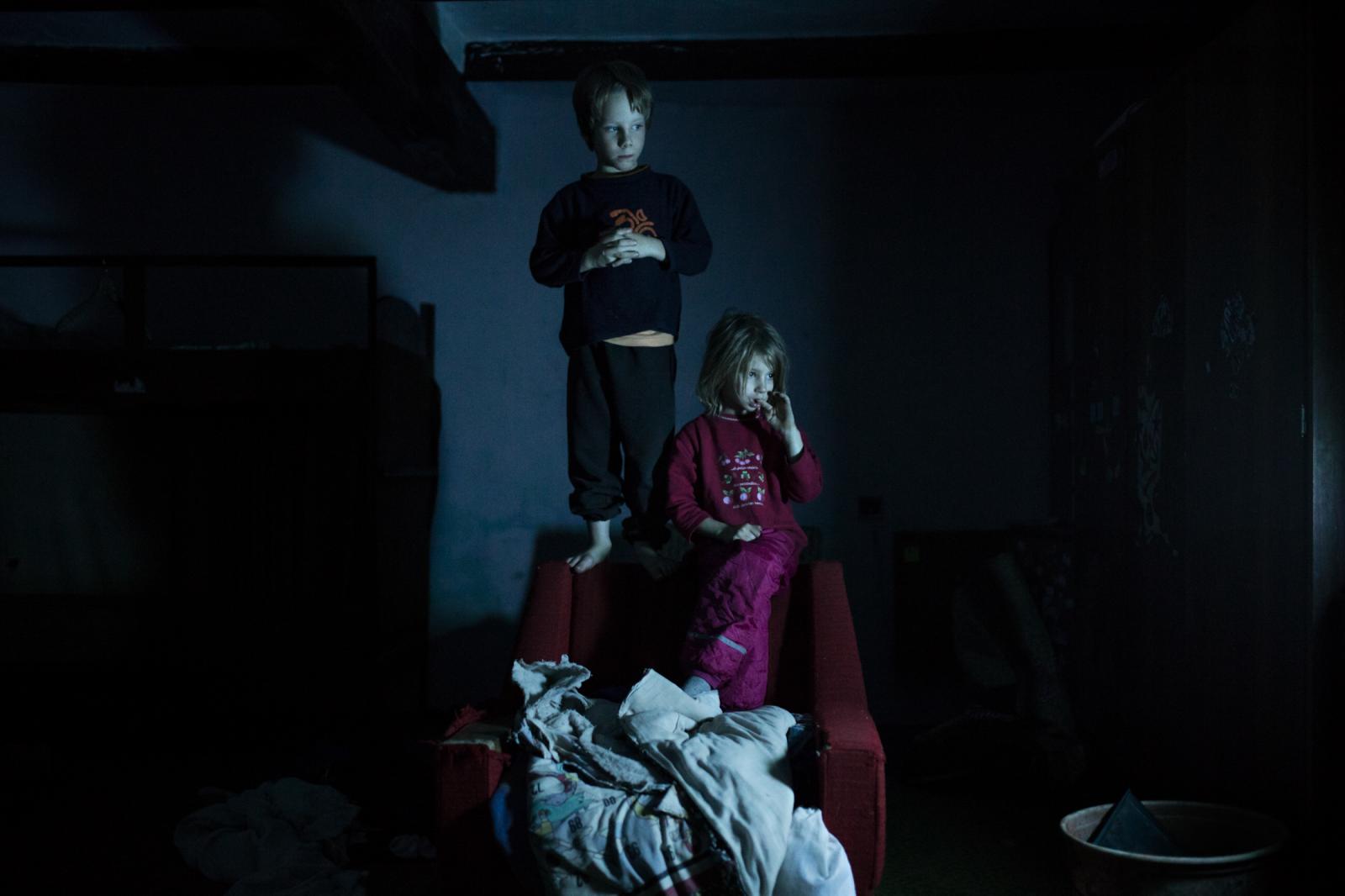 Luca and Bence Borsos watching television in the evening in their children's room. 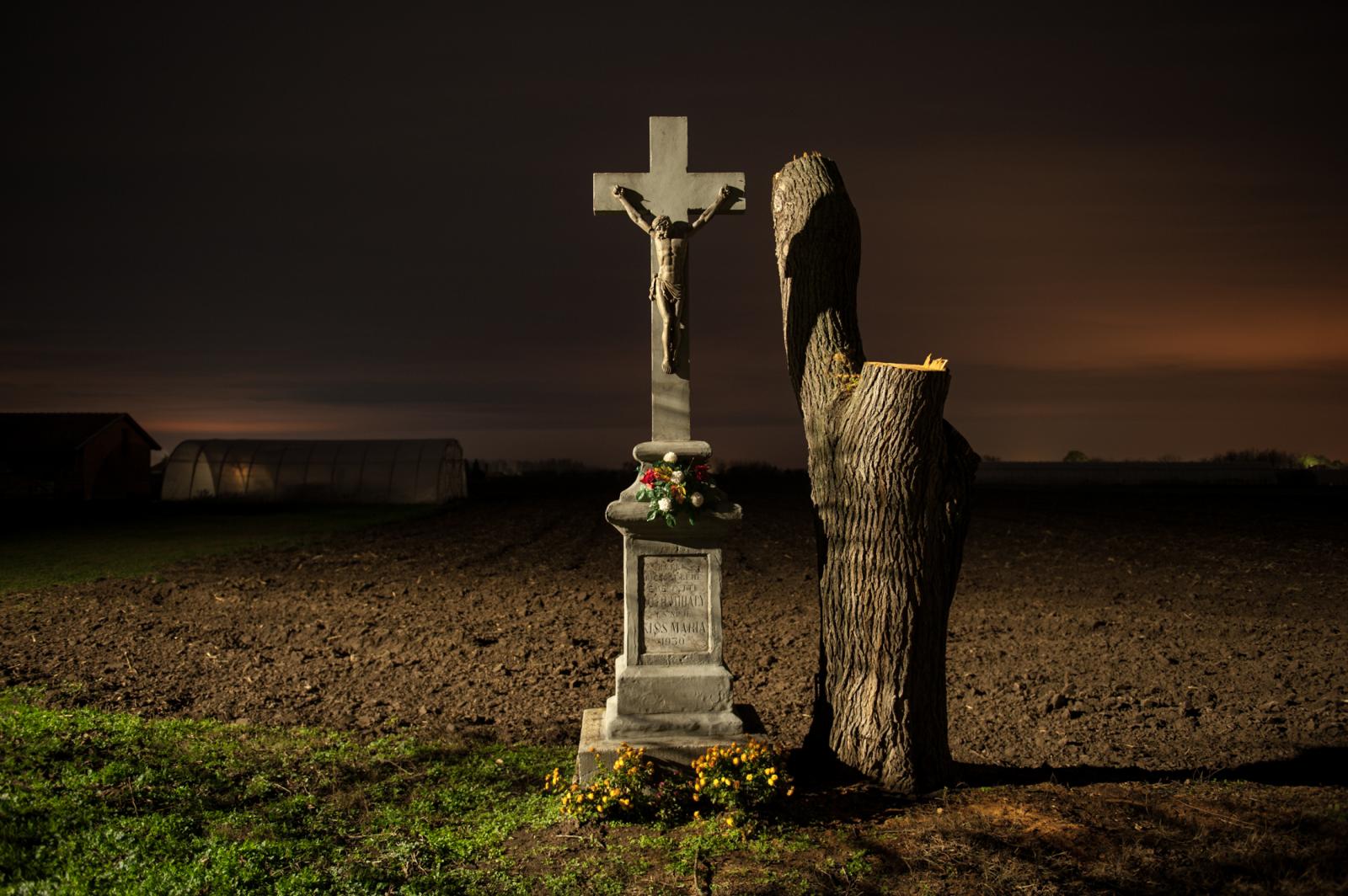 At Csanytelek, in county Csongrád 35 per cent of the population lives along dirt roads. The village struggles with migration and the spread of poverty. 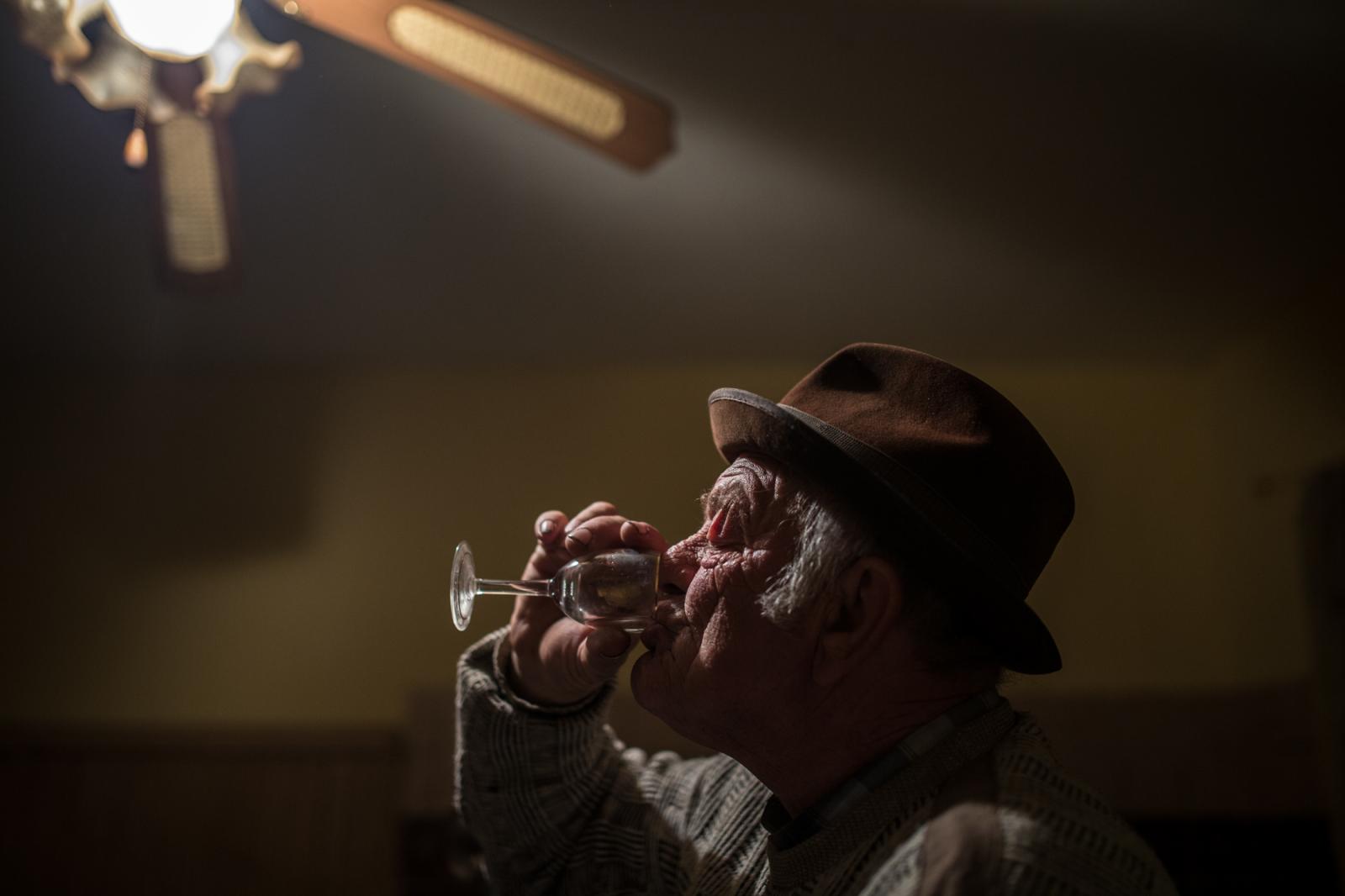 Guest is having a drink of pálinka (Hungarian spirit) at the Borsos’ house. Alcohol consumption is a serious problem in Hungary, 800 thousand people of the population of 10 million is affected by alcohol dependence. The number of so-called dedicated drinkers may reach 2,5 million. 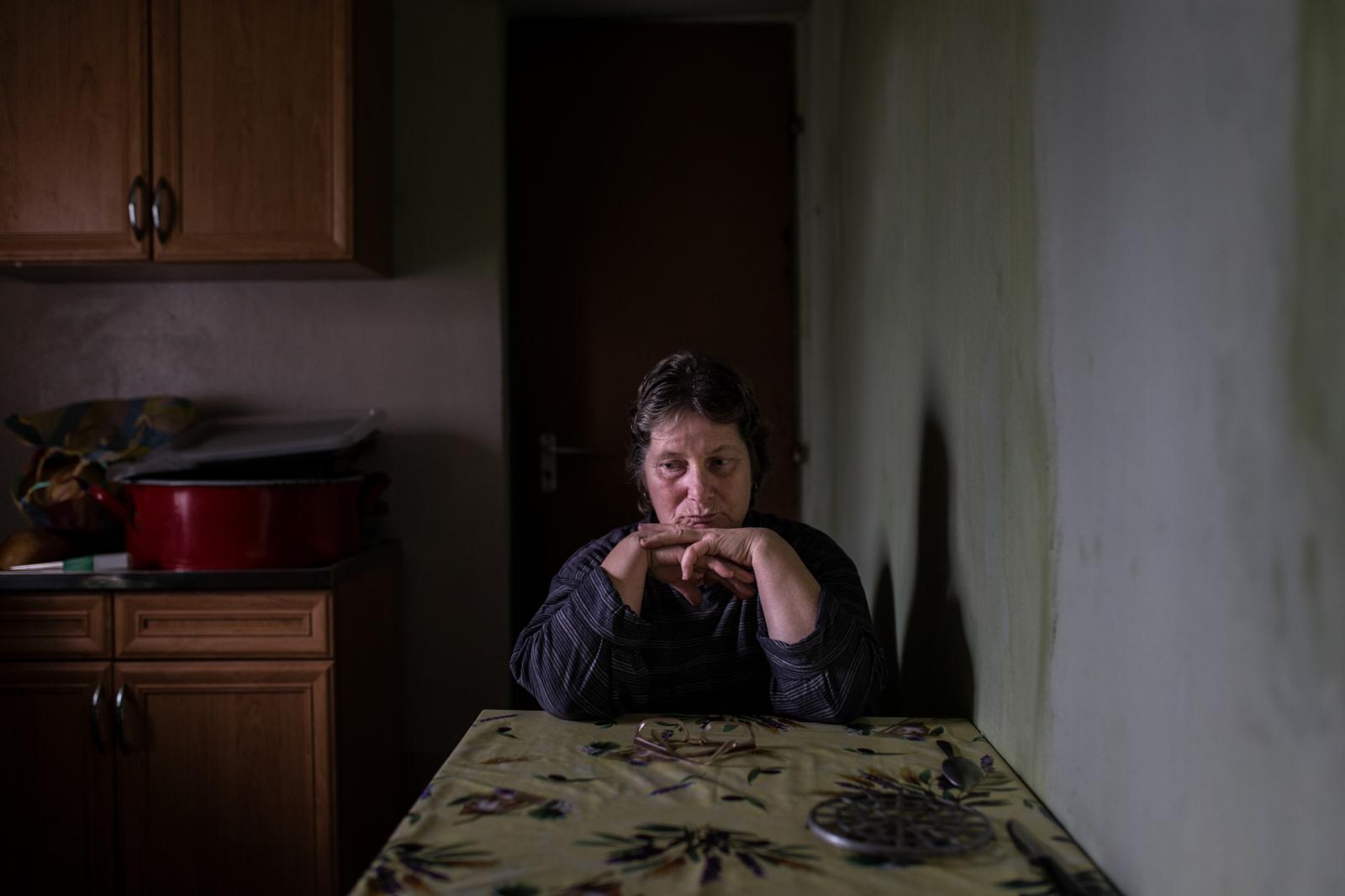 Mária Veres, in her home that is surrounded by dirt roads. Mária’s husband died years ago. They bought the farm together on loans and ever since then the retired disable woman pays the mortgage alone. 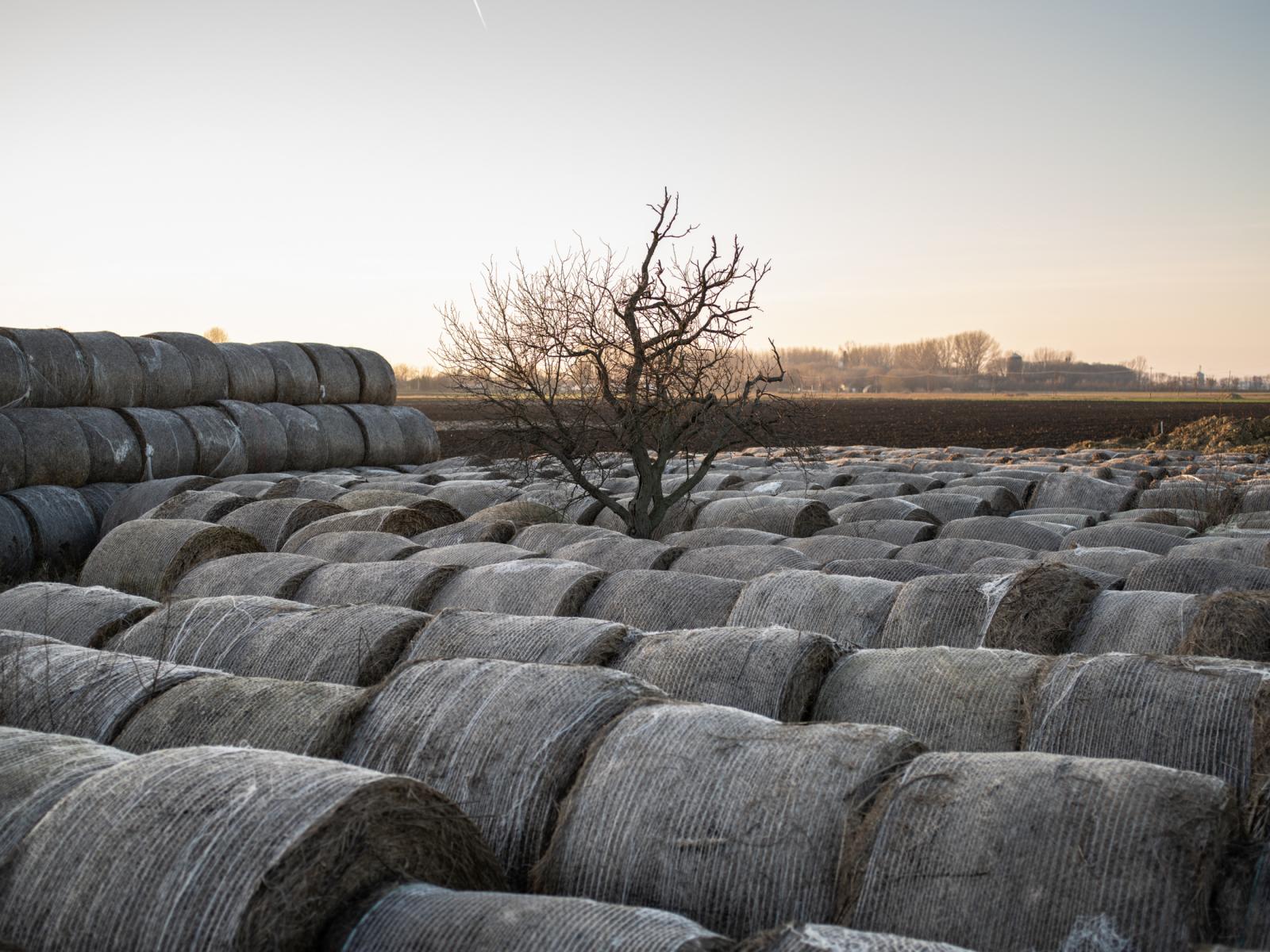 Hay bales rest in a field at the former Lenin settlement in Csanytelek.

”Mud Country" is a long-term photography project that aims to provide a personal perspective for the Hungarian dirt roads beside the spreading of poverty, the mass departure of people and the local everyday problems.

The number of dirt roads is amazingly high in Hungary. Many people live habitually and inevitably along dirt roads in the rural areas of Bács Kiskun, Békés and Csongrád counties. One of the main problems of many Hungarian villages is the state of their common roads, which also poses as an obstacle of their improvement. More than 70 percent of public roads of local governments in Hungary have no surface pavement. This problem is most abundant in the Southern part of the Hungarian Great Plains, where 80 percent of the public roads are unconstructed dirt roads.

The villages of Csanytelek and Tömörkény of Csongád county are representative examples of the problems „Mud Country“ must face. More than third of the population lives along dirt roads. In rainy weather the ground alongside the river becomes completely impassable. Years ago they spent 6500 Euros ont he design, permits and application required for preparing the renovation of three dirt streets in particularly bad condition. The local government did not win the grant, because they failed to provide traffic count data and accident statistics to prove the need for a pavement. It is impossible to provide high traffic data to justify the neces-sity of renovating a road that is impassable during most of the year; nor do hay carts ever collide on a street where even jeeps get stuck. Just like in other settlements similar to Csanytelek, not only is it impossible for the ambulance to reach a patient with a heart attack within 15 minutes, it is virtually beyond any chance to find a tractor that could tow the ambulance to the patient.

Depopulated farmlands, emigration and the spreading of poverty also characterize “Mud Country”. Millions living in the deepest poverty, an extremely small middle class and more and more people who cannot provide for their family despite having a job – these are the features of Hungary. One in every three Hungarians, that is 3,3 million people live in poverty. 1,2 million of them must endure extreme poverty, which is an extraordinarily high number for a country with a population of 9.9 million. Almost every second hungarian is living in cramped conditions, every fourth flat is not properly protected against rain or has mould on the walls and almost one million households do not have electricity, heating and gas.

The "Mud Country" later on has also face the problems of the mass departure of people, which seriously affects rural villages. In Hungary already the half of people between 19 and 30 would like to work abroad. A significant proportion of youth and middle aged Hungarians desire to leave the country and have already started planning their emigration. Currently, more than 600,000 Hungarians live abroad in the European Union.

This is an ongoing project.

By Simon Moricz-Sabjan — Closed Borders The international refugee crisis is unique both by size and complexity. It completely reshapes Europe and seems to be permanent...
Mar 25, 2019

By Simon Moricz-Sabjan — I discovered Moszkva tér (a public square and busy transportation hub in Budapest that literally translates to Moscow Square) in the mid-nineties..
Mar 23, 2019

By Simon Moricz-Sabjan — Street workout Street Workout is the modern art of bodyweight workout in a public space and outdoor environment. As a combination of gymnastics and..
Mar 13, 2017