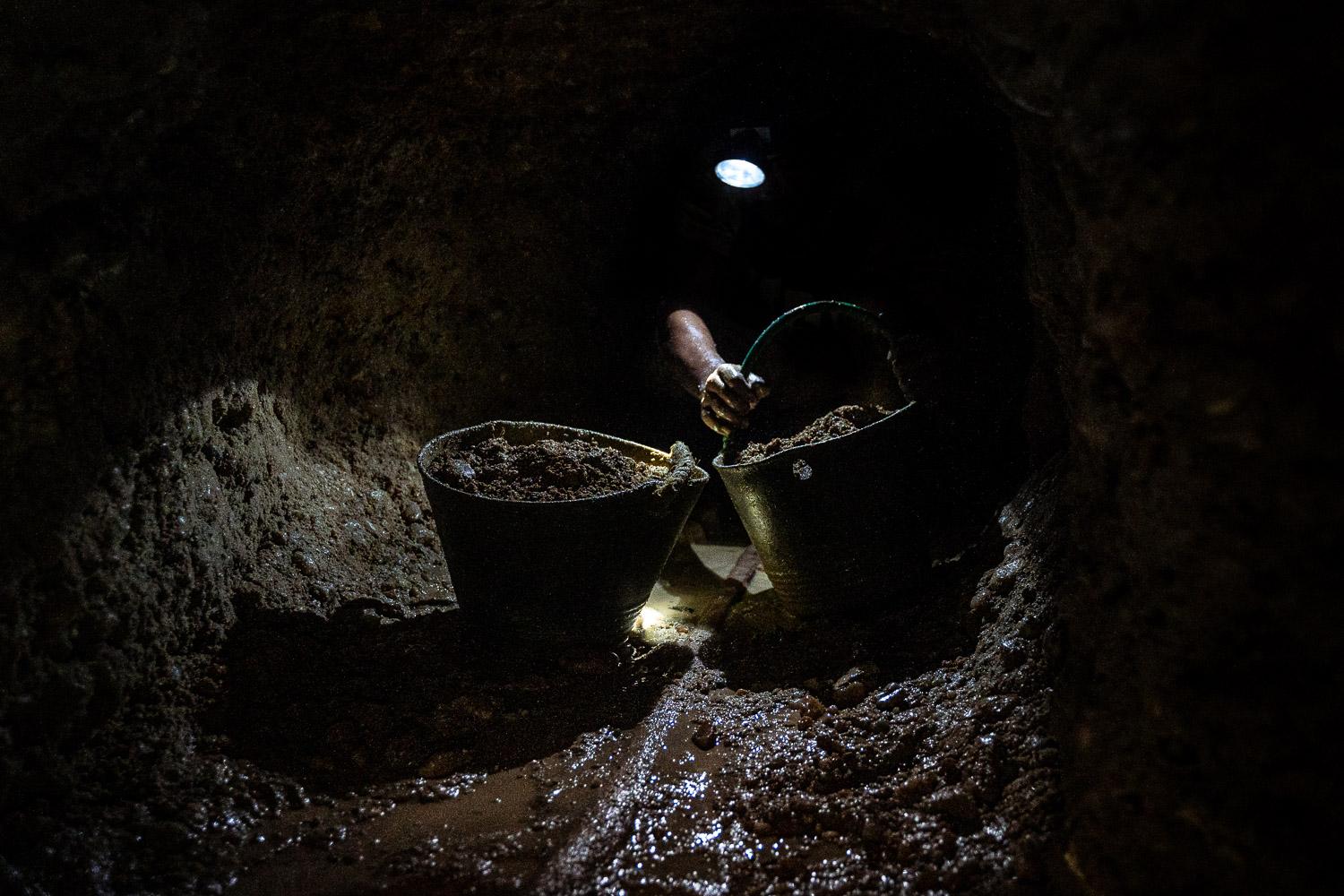 As Venezuelans struggle to afford food, many have turned to illegal gold mining to survive. People are descending to this remote region from every corner of the country. If in 2012 there were about 40,000 miners, today between 300,000 to 500,000 men, women and even children work at the mines. 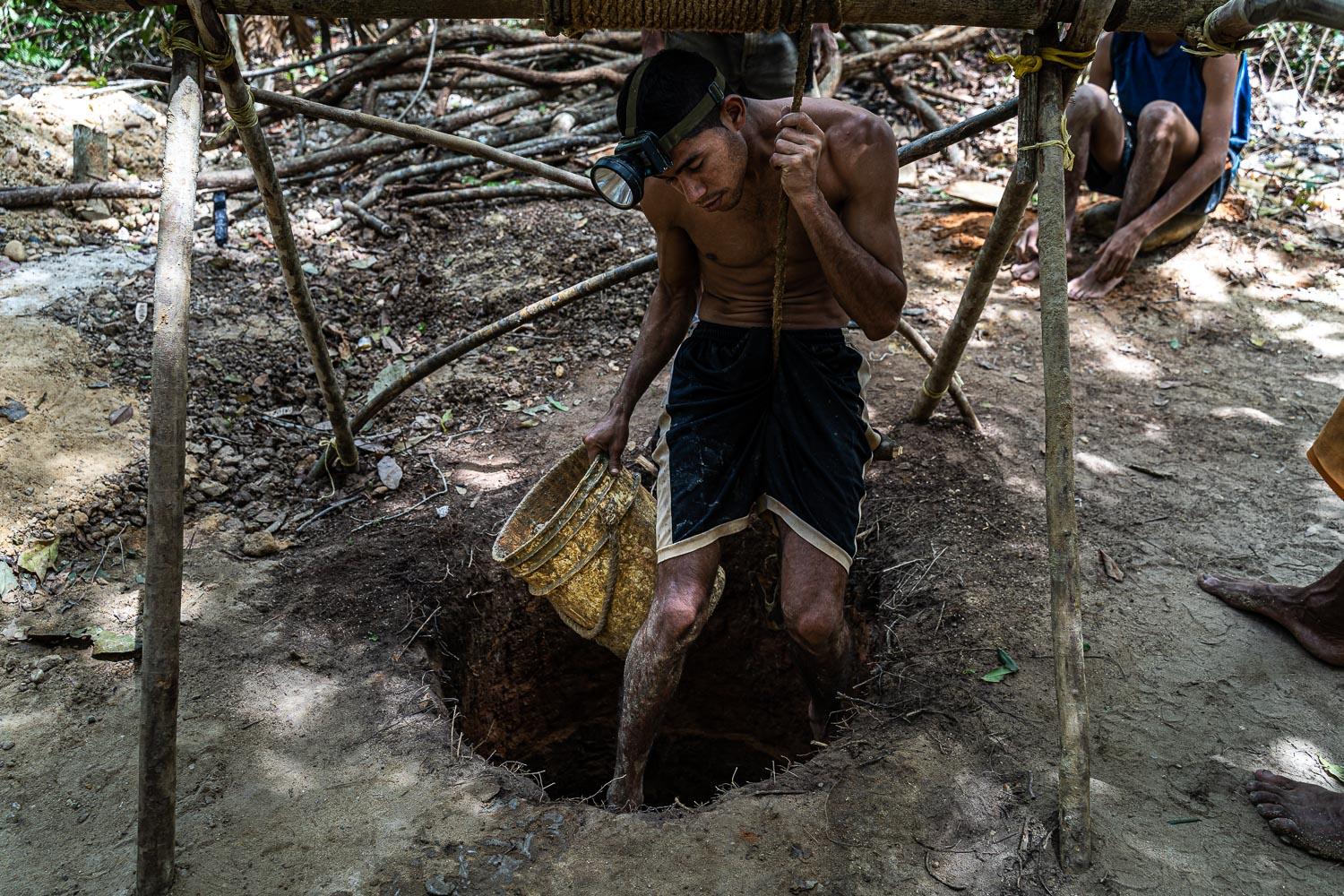 Miners work in a medieval fashion, sometimes with their bare hands. Given the current economic situation of the country, a grama (a gram of gold) is worth up to five times the monthly minimum wage. 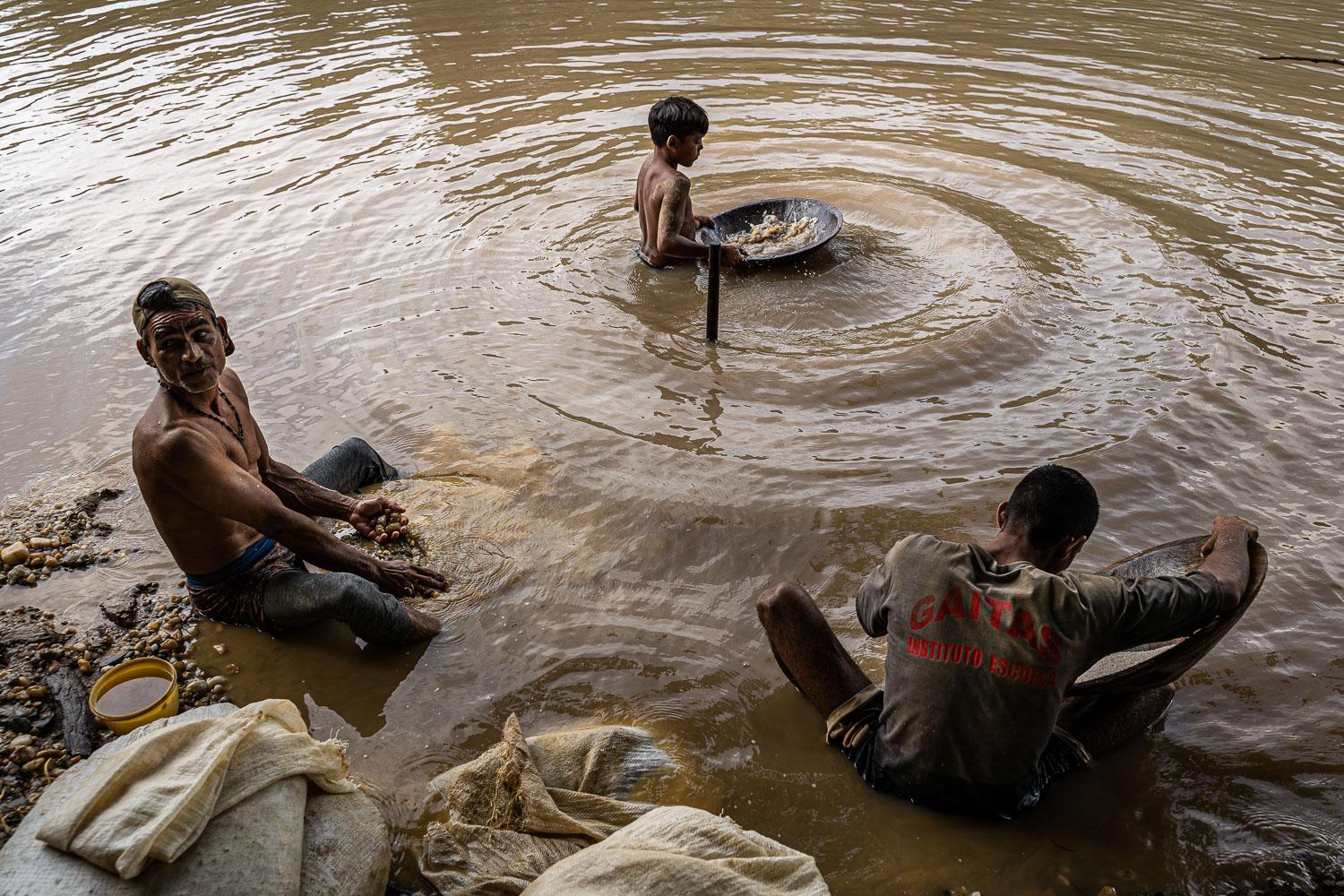 3 of 25 © 2021 Ignacio Marin
Two men and a child look for gold at a river near the Las Parcelas mine in Tumeremo.

Old men and children are sometimes seen working in the mines. Often they are from the same family who migrated together in a desperate attempt to survive the economic crisis. According to a report by Cecodap, 45% of the miners in the region are children or adolescents. 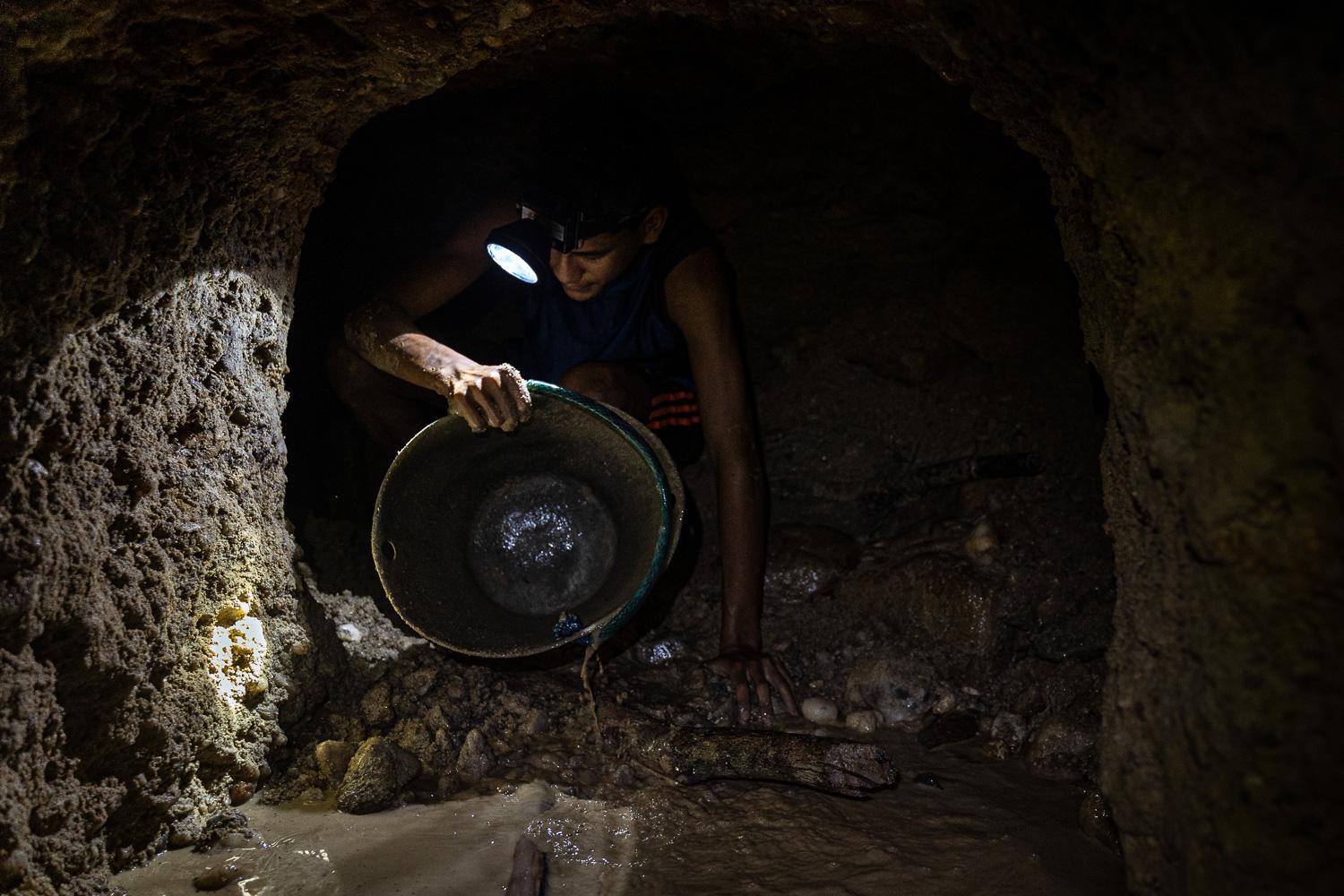 4 of 25 © 2021 Ignacio Marin
“El Mono” (The Monkey) drains water at his gallery using a bucket at a mine in Las Parcelas, Tumeremo.

Sometimes, especially during the rainy season, the mines flood and the walls collapse burying the miners inside. “What the mine gives, the mine takes away”, the miners say. 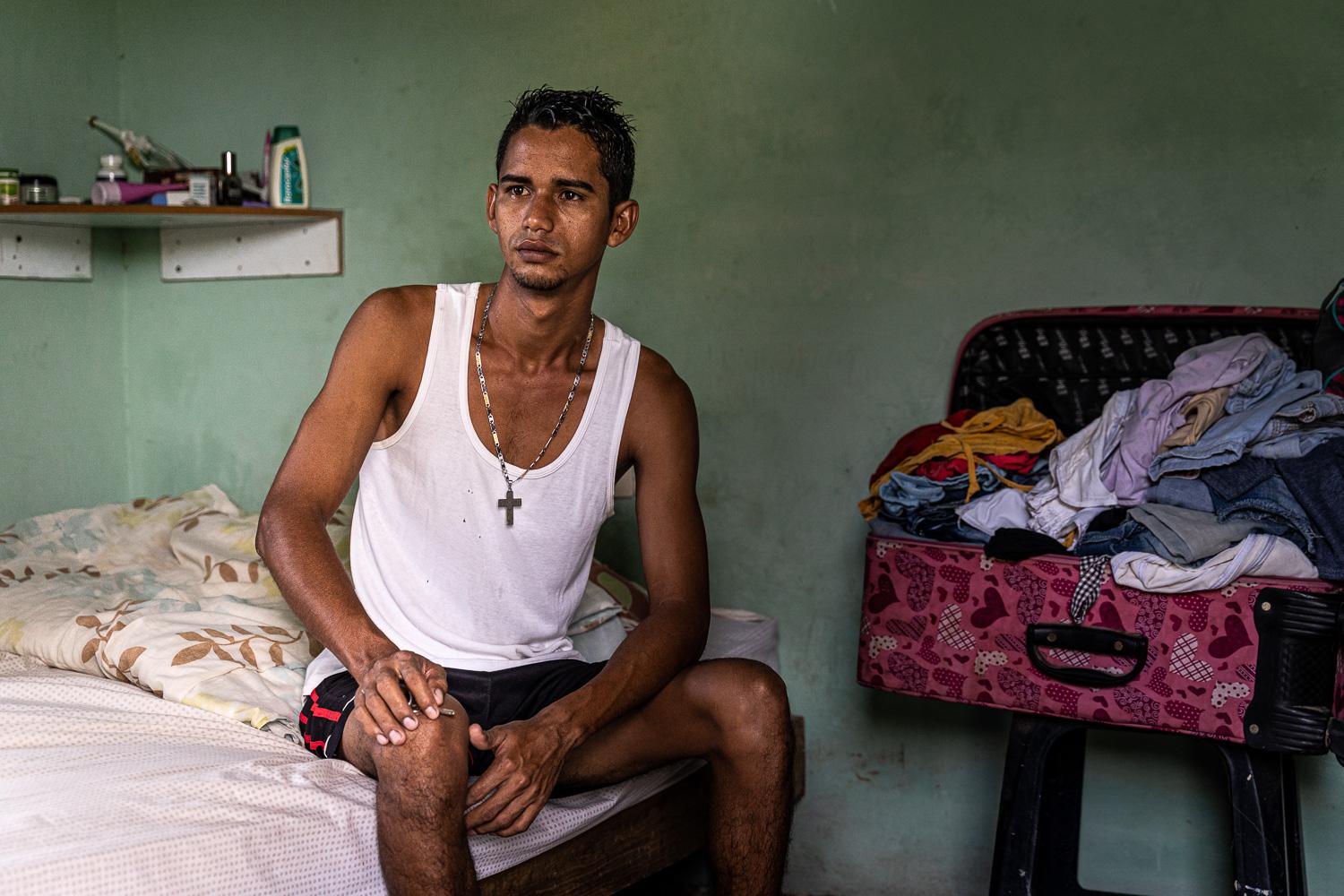 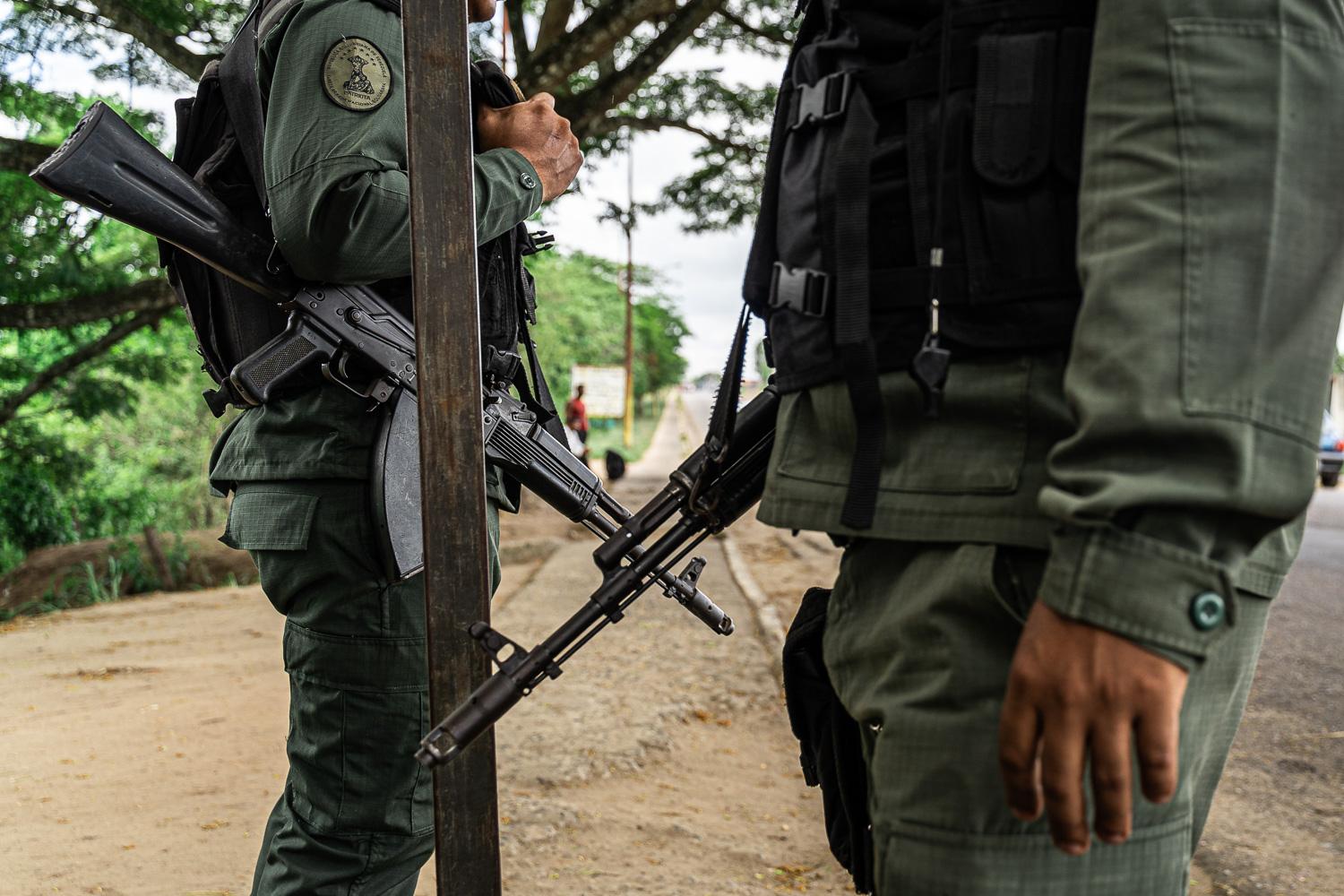 6 of 25 © 2021 Ignacio Marin
Soldiers guard a checkpoint at the entrance of Tumeremo, a small town located about 882km from Caracas that has become the headquarters for the surrounding mines.

Maduro’s government has found in the illegal mining industry the last cashcow left, allowing his isolated government to keep financially afloat. It is also a prize for the army’s loyalty: the bribes that come with protecting the industry has become a huge source of revenue for almost all branches of the military forces, even reaching high ranking officials in Caracas, the capital. 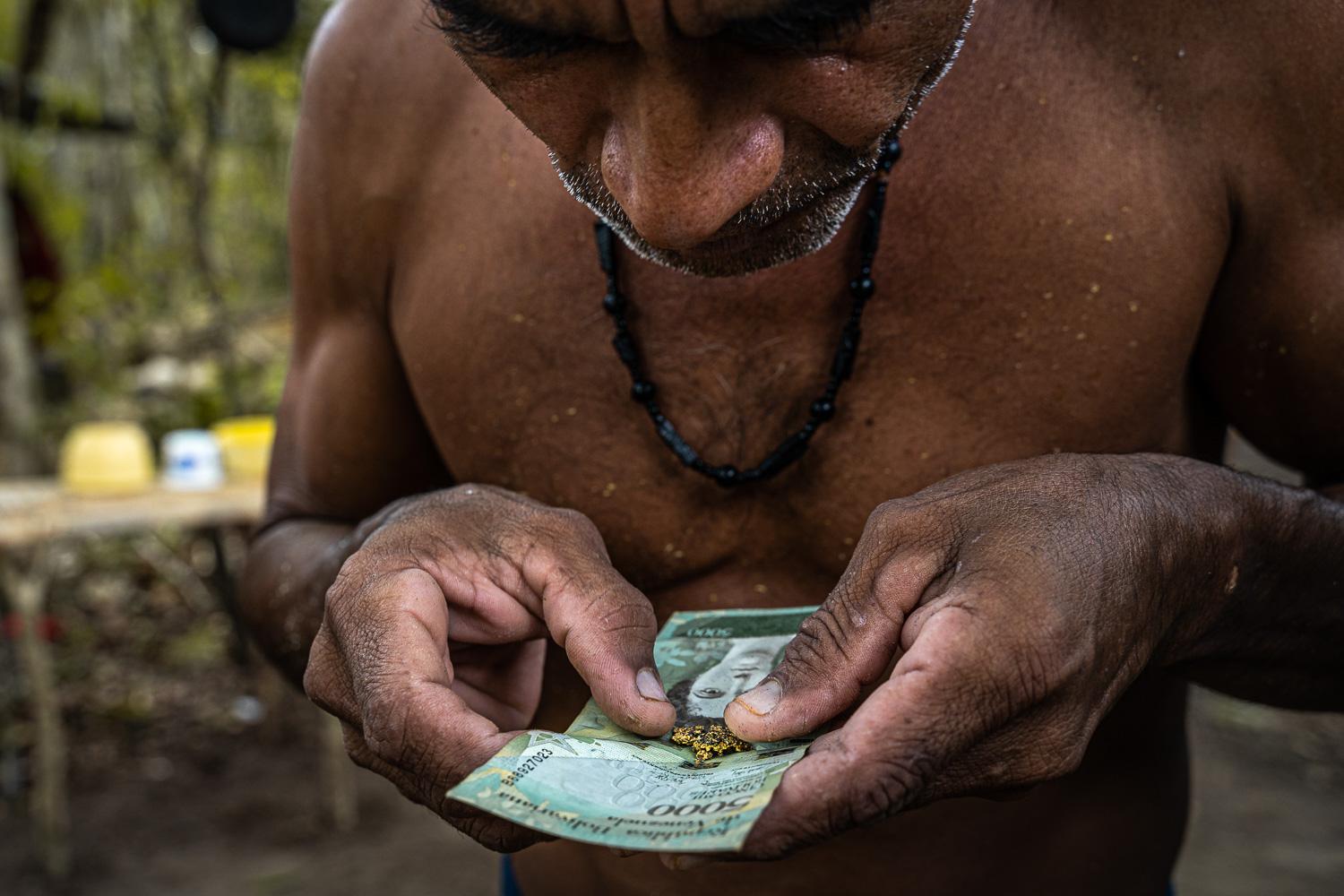 After months of backbreaking work, a miner can expect to earn about 5 grams of gold - the equivalent of 230 USD at the international market. Miners extract higher quantities of gold but are only allowed to keep a small amount of the gains for themselves.  This is because the miners have to pay to pay “vacunas” (vaccines, a bribe) to the armed groups that control the mine. The Sindicatos (crime syndicates) are known to execute those who fail to pay. 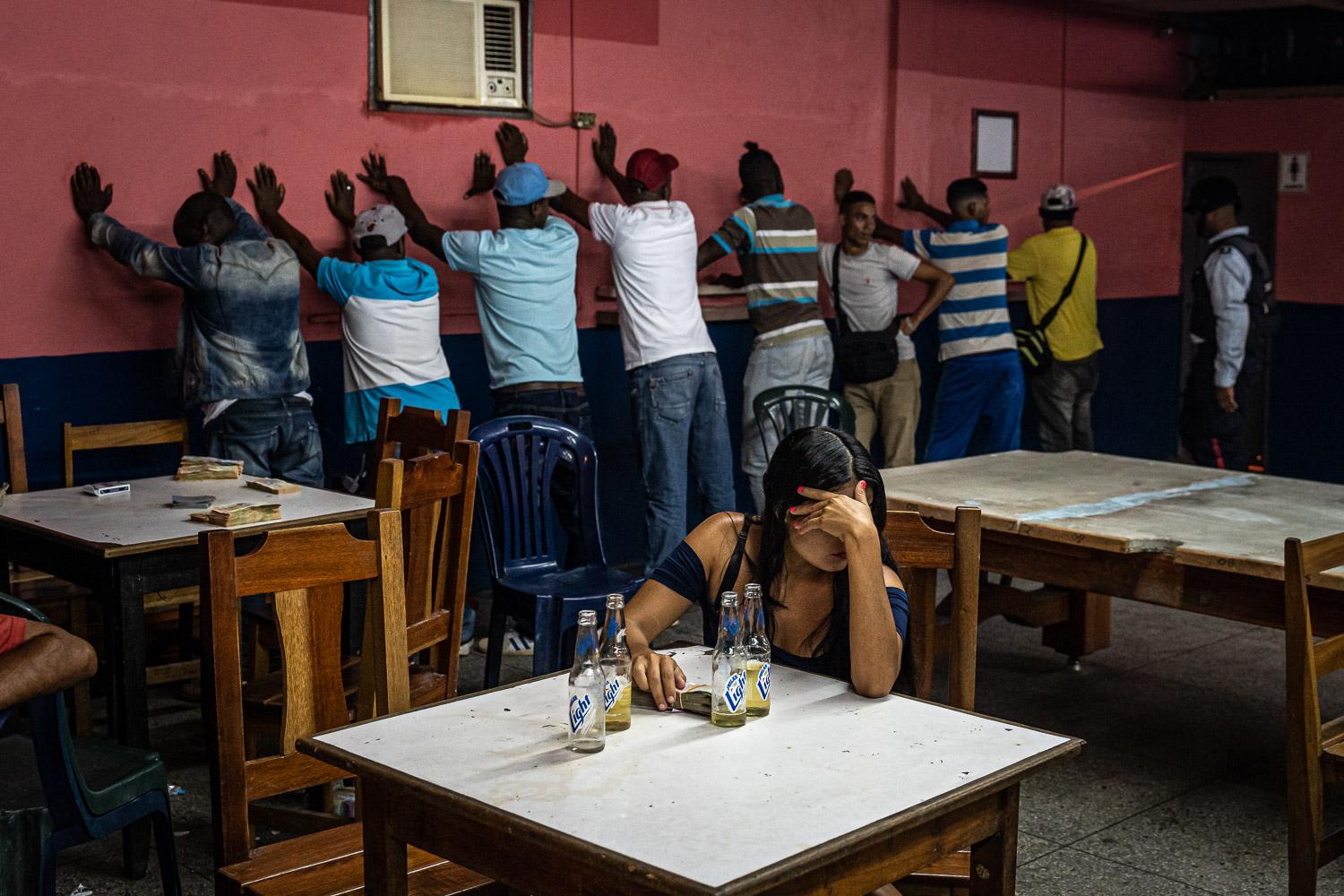 8 of 25 © 2021 Ignacio Marin
Those suspected of belonging to a crime syndicate are identified during a police raid in a local bar in Tumeremo. The revenues that the armed gangs get from the mines are used to reinforce their power and control over the towns. According to Colombian intelligence, illegal gold mining has become more profitable than cocaine. Criminal networks currently control most of the mining towns. 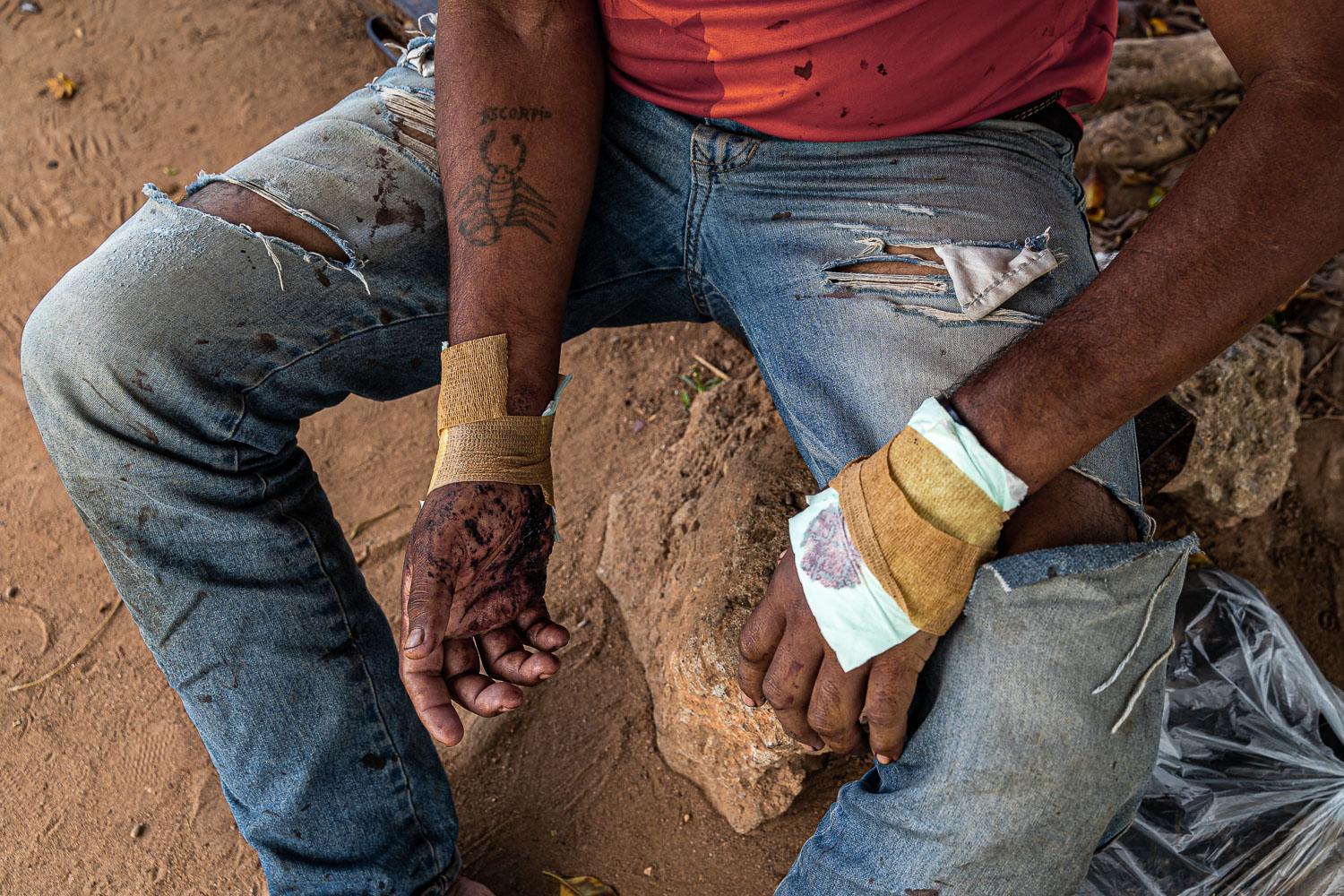 9 of 25 © 2021 Ignacio Marin
A wounded man rests outside the hospital in Tumeremo. He was shot in each hand: the penalty for thievery according to the law of the Sindicatos.

Across the entire Bolivar state, locals have learned to live with the terror spread by armed groups. Reports of mass graves, murders and mutilations are frequent on the local media. The nonprofit International Crisis Group found that 12 massacres have killed 107 people in the mining center of Bolívar state since 2016. 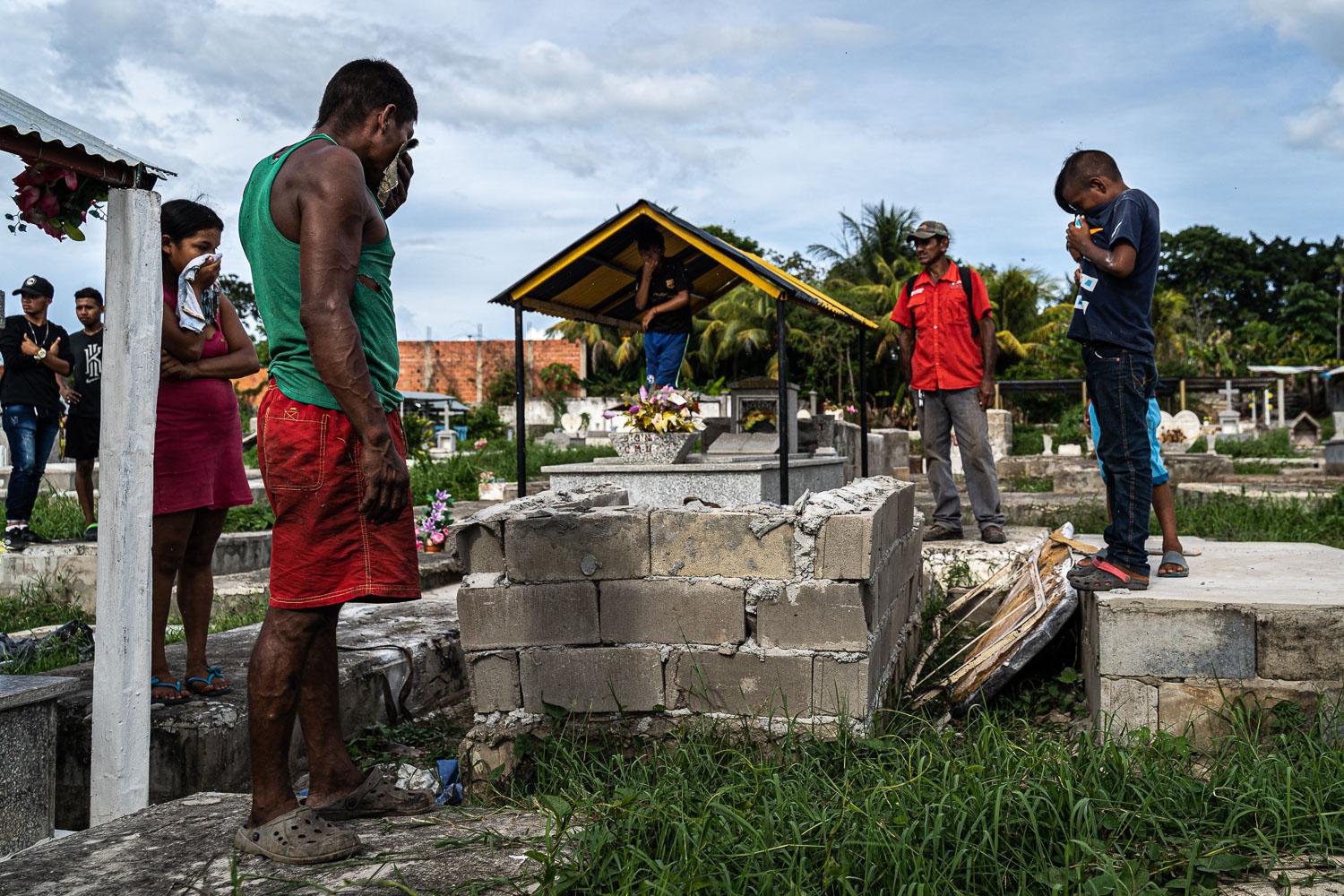 10 of 25 © 2021 Ignacio Marin
Residents of Tumeremo’s cemetery attend the burial of an unidentified man. The corpse was found in the street by the homicide police, but having no ID and without anyone reporting a disappearance, it was buried three days later at an anonymous grave.

Tumeremo (Municipio Sifontes) has become the 2nd most dangerous municipality in the whole country. In 2018 alone, there were 199 violent deaths for every 100,000 people. Yet many claim that the real figure is much higher as many murders are not reported for fear of speaking out while, in other cases, victims are miners that came alone from another region and so have no one to report them when they go missing. 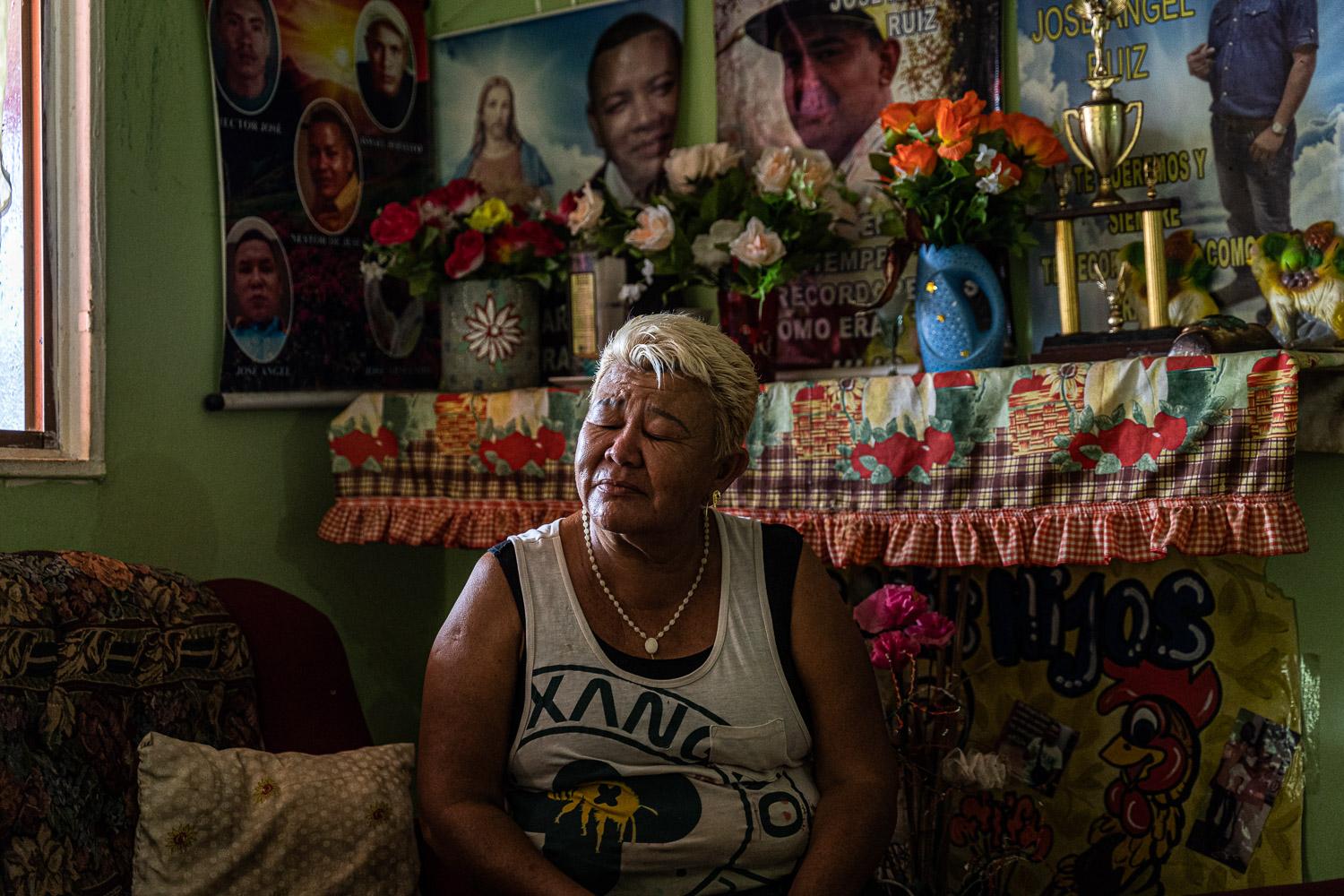 11 of 25 © 2021 Ignacio Marin
Anaís Montilla at her house in Tumeremo. She was the mother of three of the miners killed during the Tumeremo massacre in March 2016 at the Atenas mine. His sons - Nestor, 31, José Armando, 27, and José Ángel, 25 - were allegedly killed together with other 25 people when the gang of El Topo (The Mole) seized control of the mine killing everyone inside, including those not involved in criminal activities. “A massacre like this can only be done because of the greed for gold,'' says Anaís. The corpses, it is said, were loaded into a truck that drove the town’s main road spilling blood from the sides, yet no one dared to stop it. 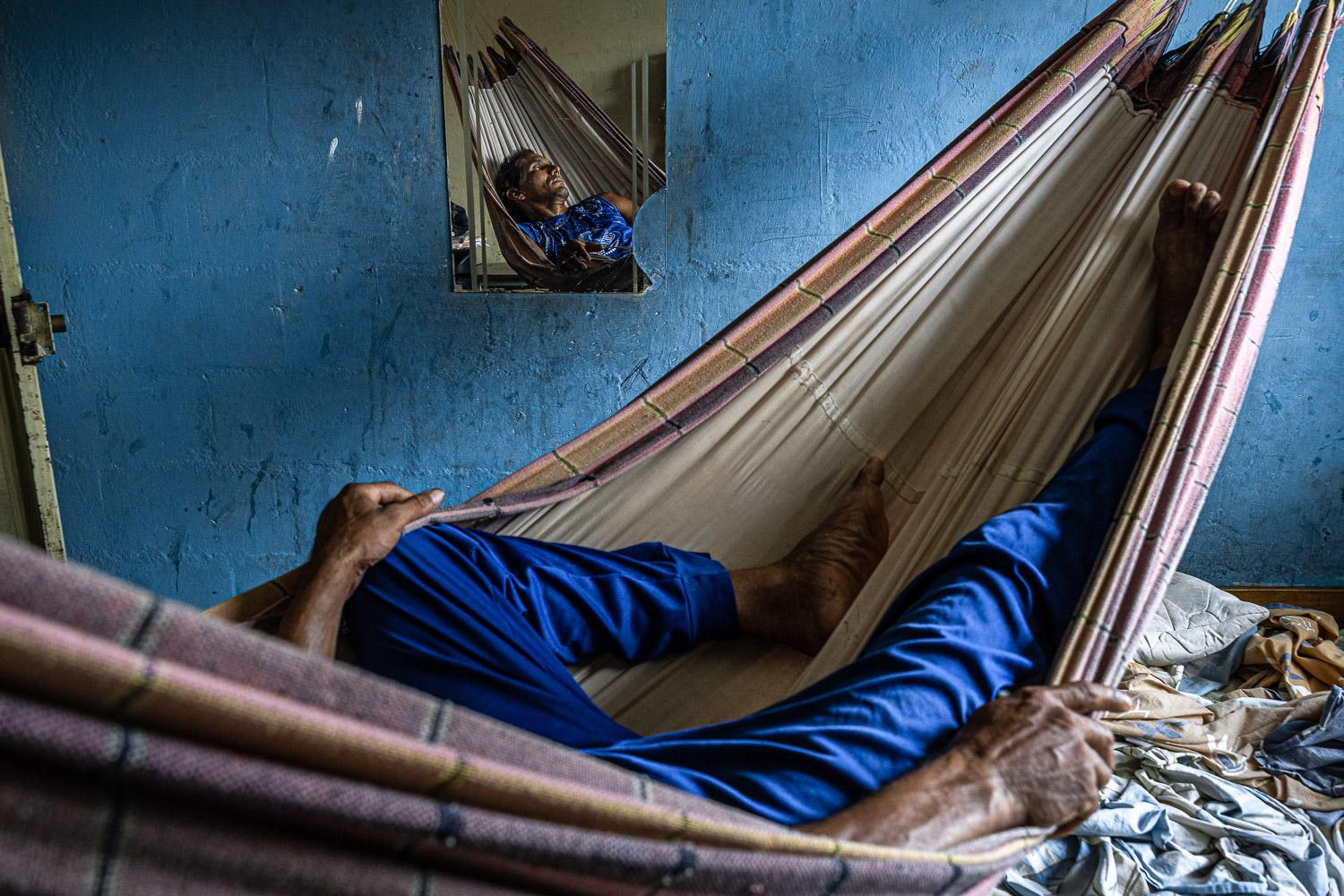 12 of 25 © 2021 Ignacio Marin
Men wait for their transport to the mines in the earling morning in Tumeremo. Despite the dangerous conditions, the economic crisis has pushed many impoverished Venezuelans to work at the mines. 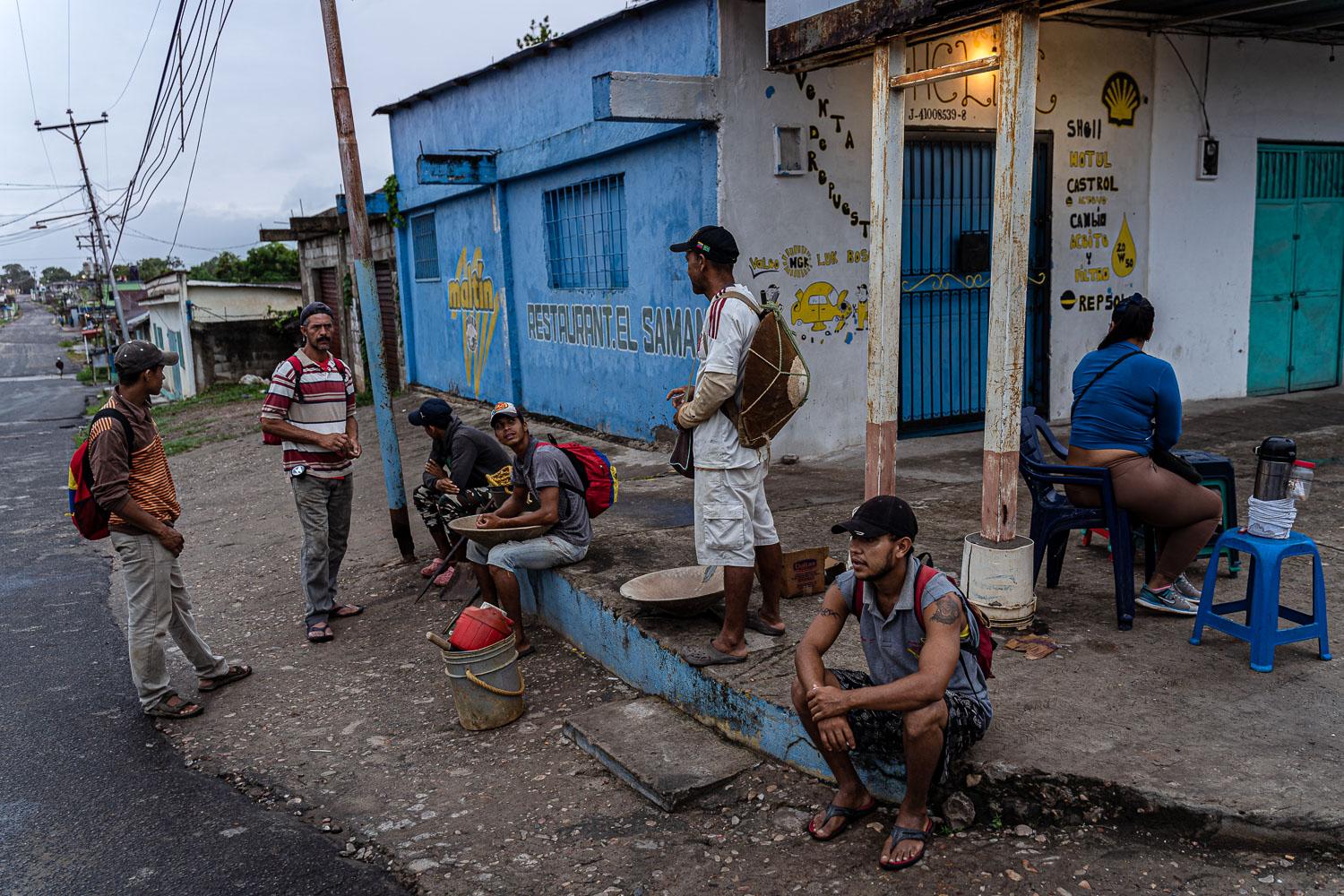 13 of 25 © 2021 Ignacio Marin
Keinis Lepore rests at his house in Tumeremo. He has worked at the mines for over 19 years, starting when he was only 13. “The situation now worsened a lot. Now every mine is under control of the syndicates. Everyday is a murder. We work and live in fear”. 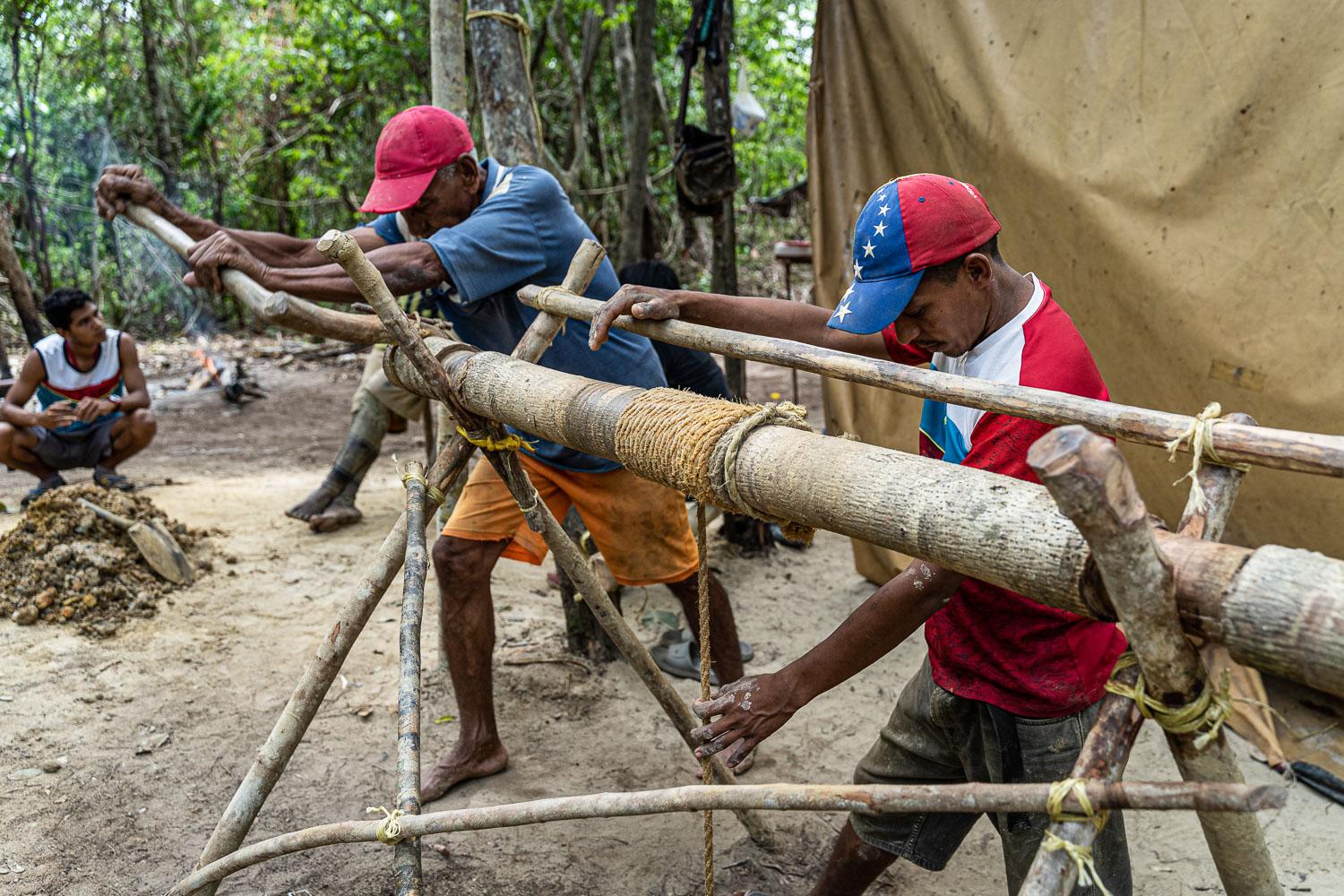 14 of 25 © 2021 Ignacio Marin
Two miners work at the mine of Las Parcelas, in Tumeremo. Since 2016, Maduro’s government has purchased 17 tonnes of gold (worth around $650 million) from miners like this, according to the nation’s central bank. 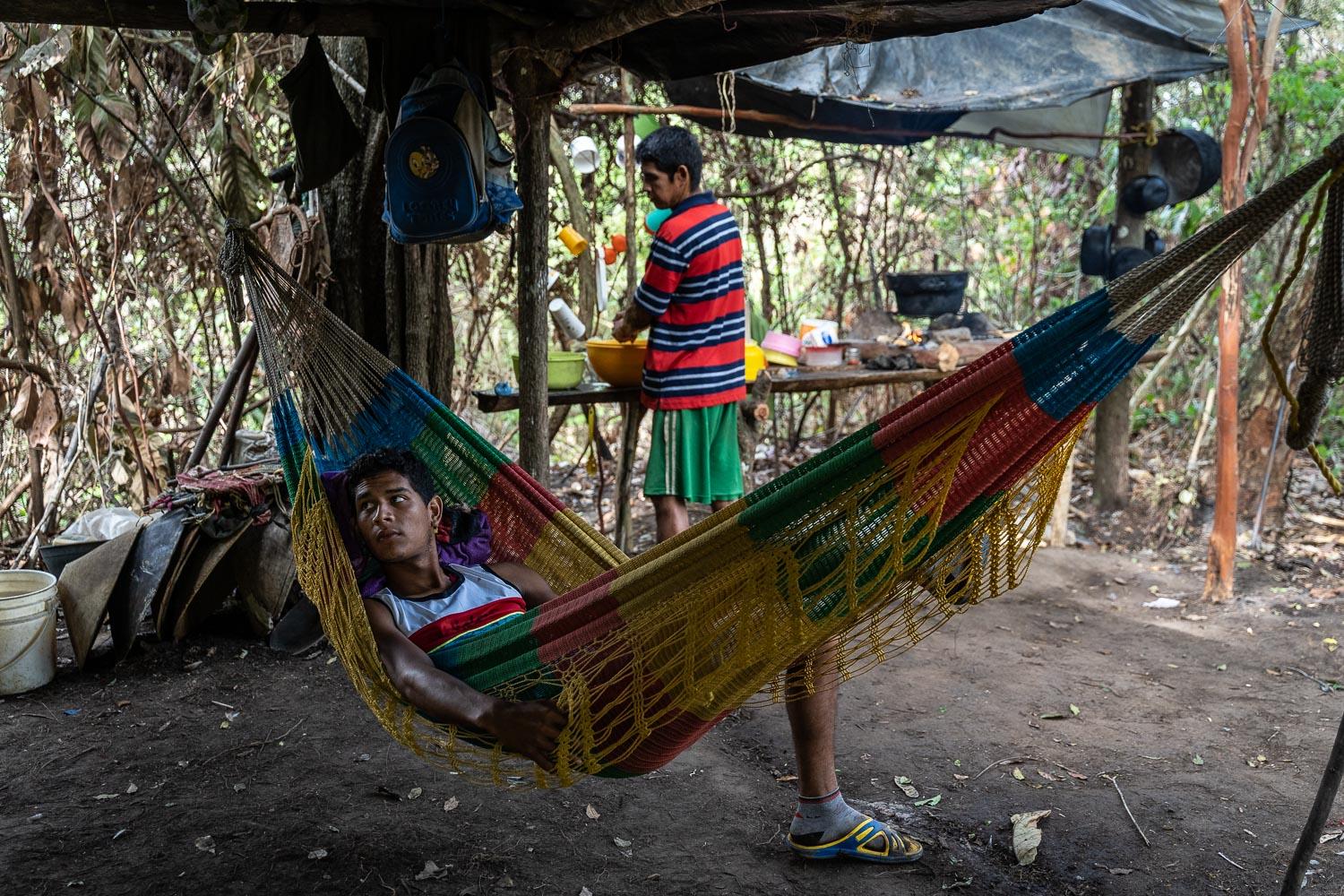 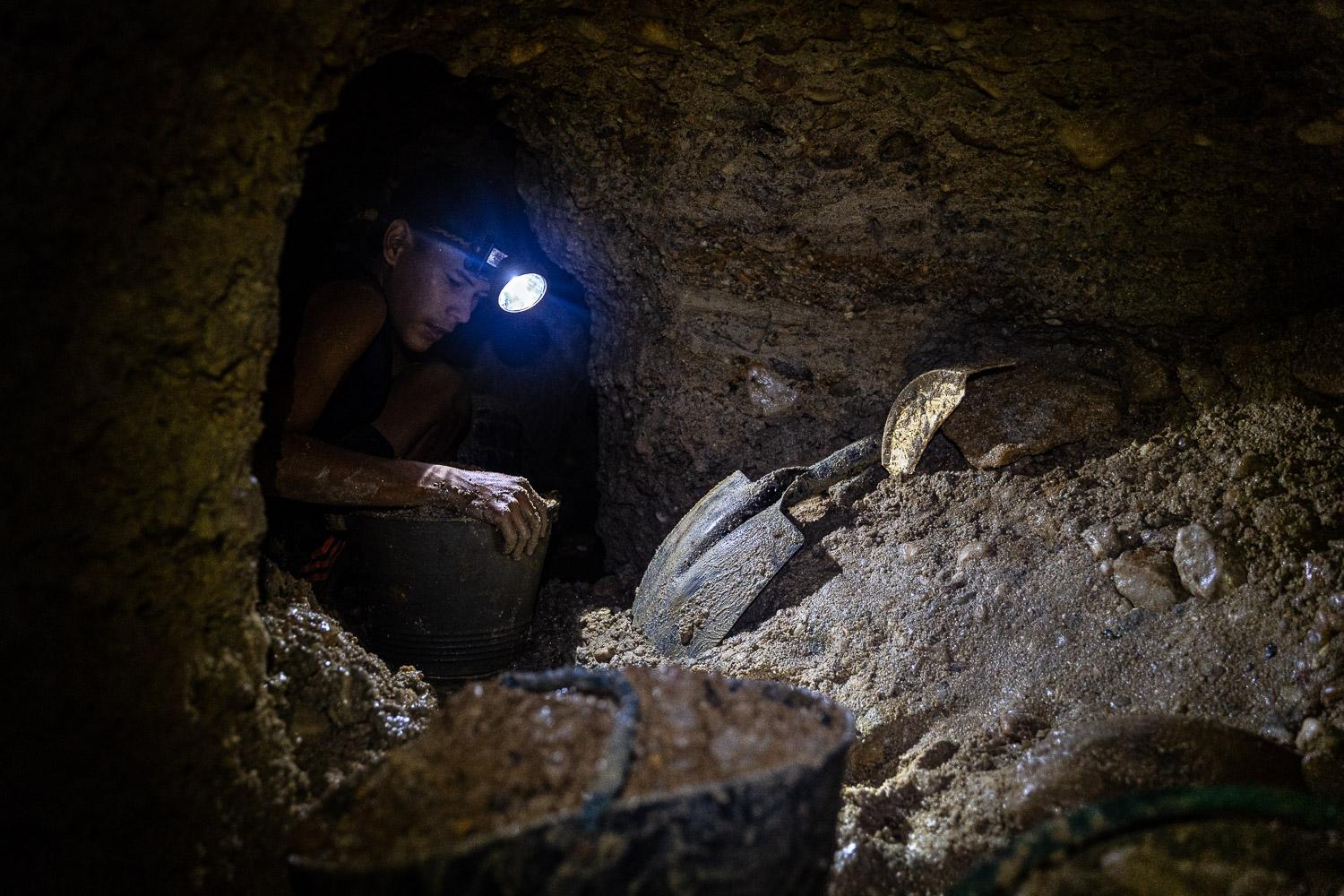 16 of 25 © 2021 Ignacio Marin
A miner, who goes with the nickname of “El Mono” (The Monkey), works inside a gallery at the Las Parcelas mine. He is originally from Maracaibo, about 1.400km away, one of the counties hardest hit by the economic crisis. He has been working as a miner for over a year. “Every little that I get from the mine demands a huge amount of work and risks, but what can I do? I came so my family can survive.” 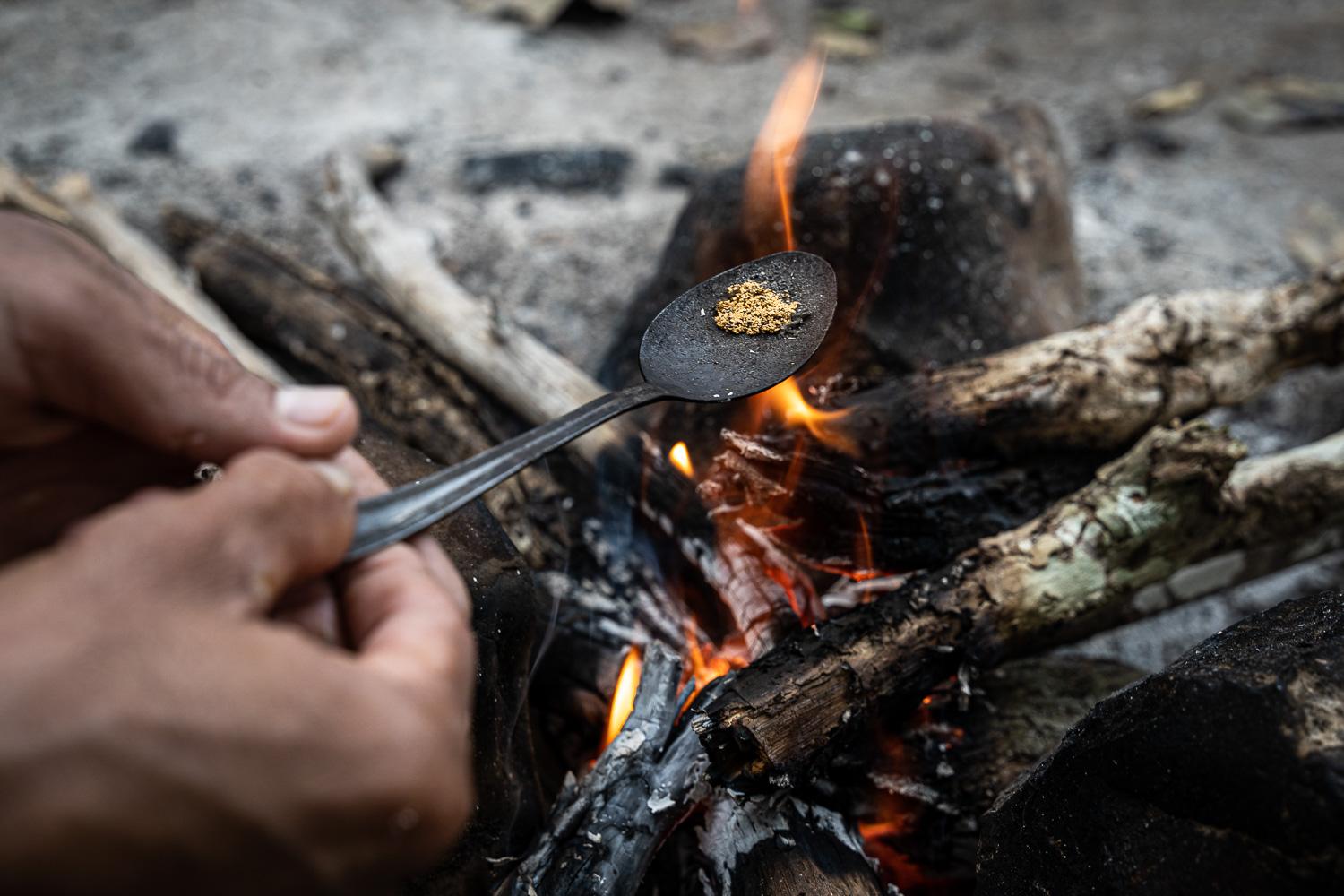 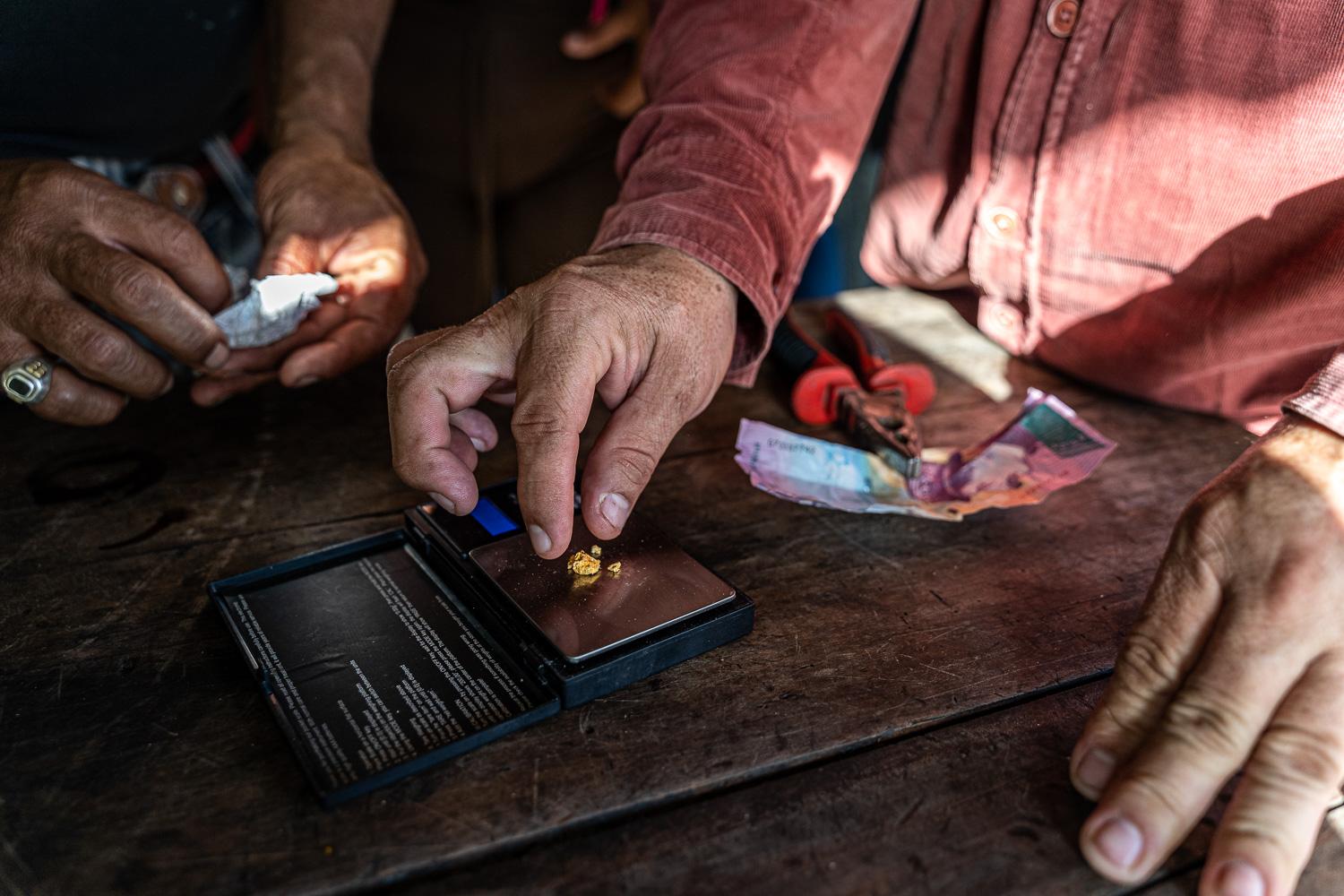 18 of 25 © 2021 Ignacio Marin
A man pays a debt in gold to a local “business man” at the Sunday cockfighting arena, in Tumeremo.

This sort of social event has become a meeting point for gang leaders to show off their control, collect bribes, or settle disputes. According to Colombian intelligence, illegal gold mining has become more profitable than cocaine.

19 of 25 © 2021 Ignacio Marin
A group of men, some of which are miners, scream and shout during Sunday’s cockfighting. 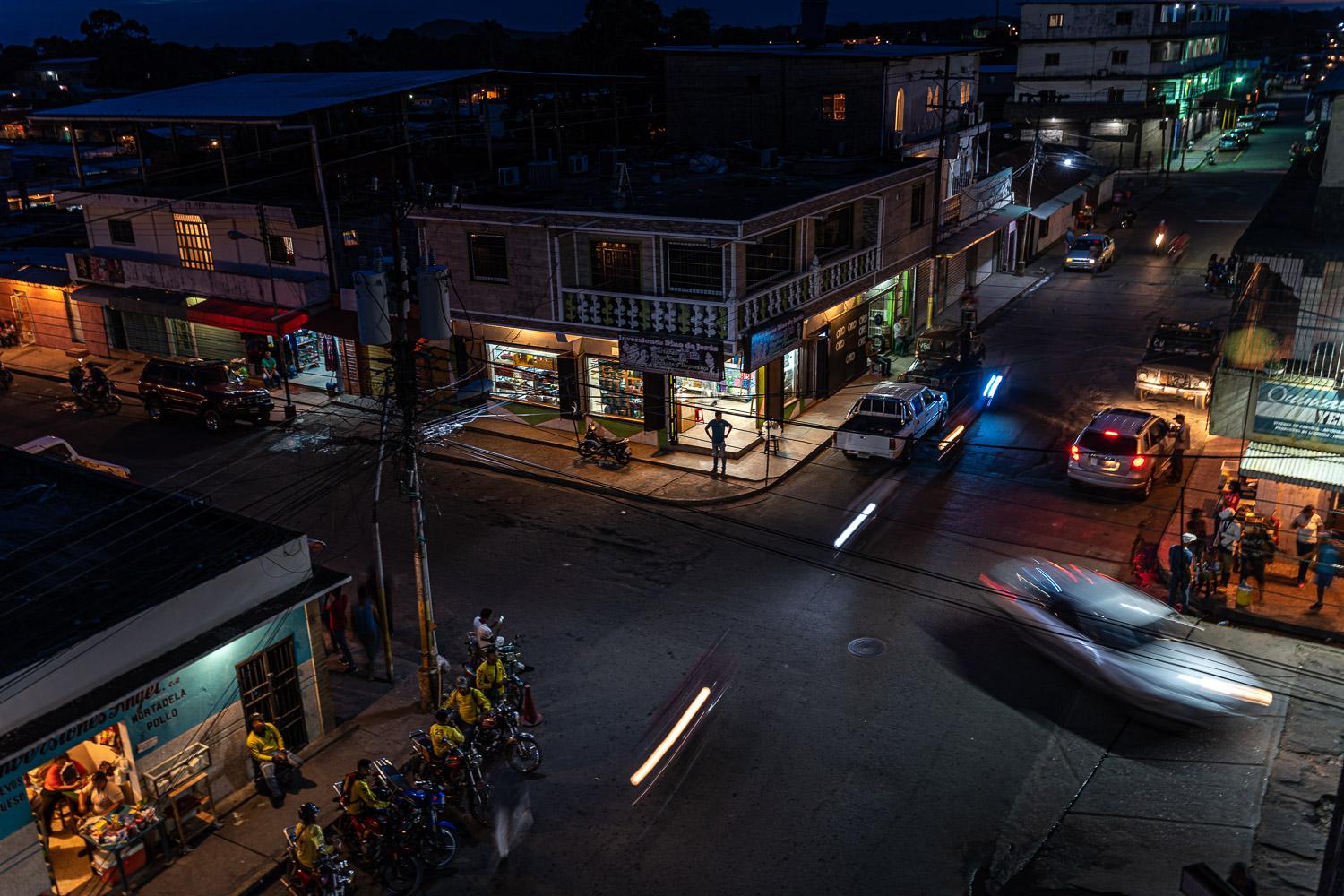 In Tumeremo everything revolves around the mining industry and, at the same time, is under the control of the crime syndicates. While in other parts of the country basic goods such as food, fuel or medicines are scarce, they are abundant in the part of the country as the riches of gold can afford to pay a higher price. 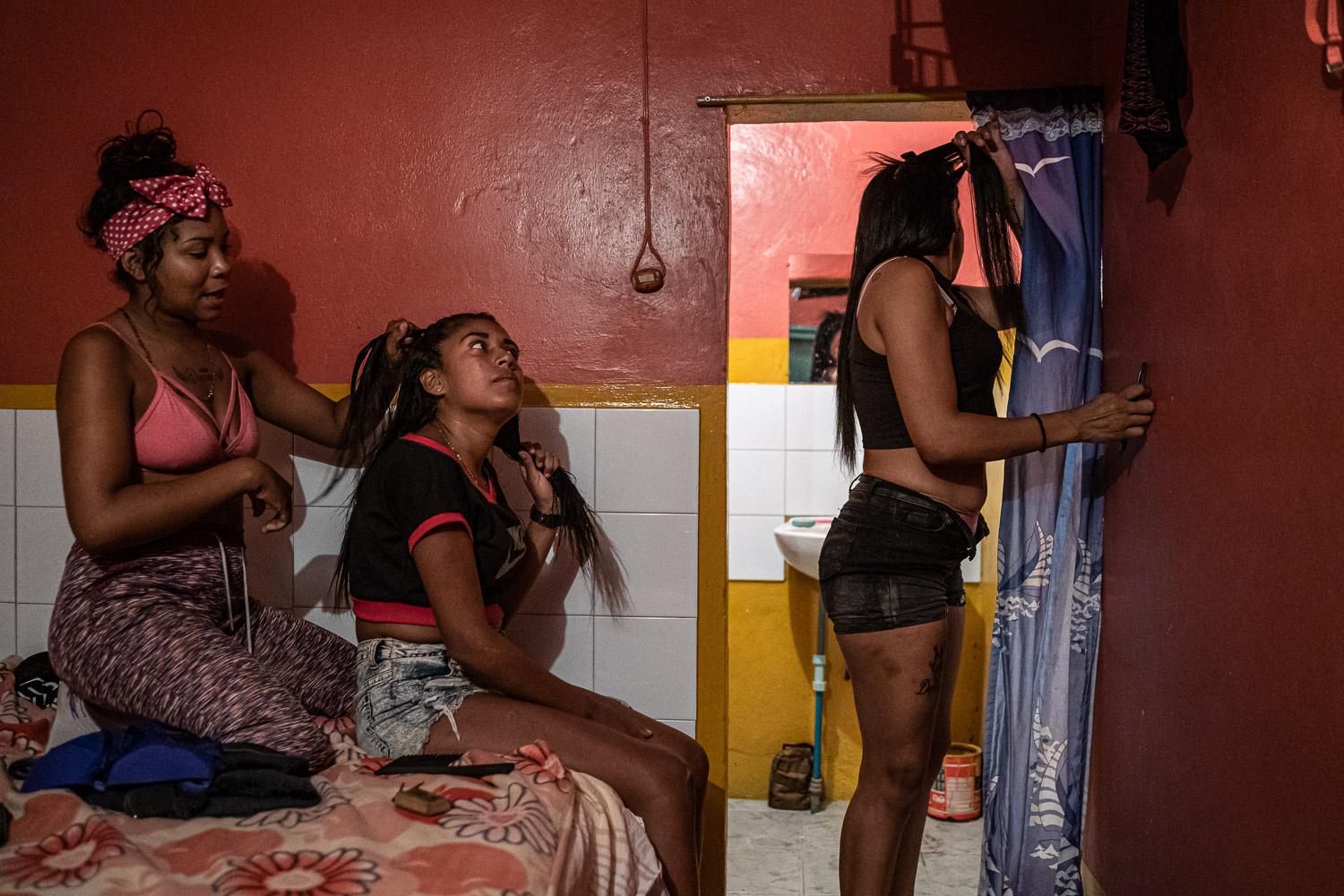 The mine ecosystem has also meant a surge of sex workers in the area. Girls from every part of the country come to escape the economic crisis. Many tell their families that they work as cooks at the mines. 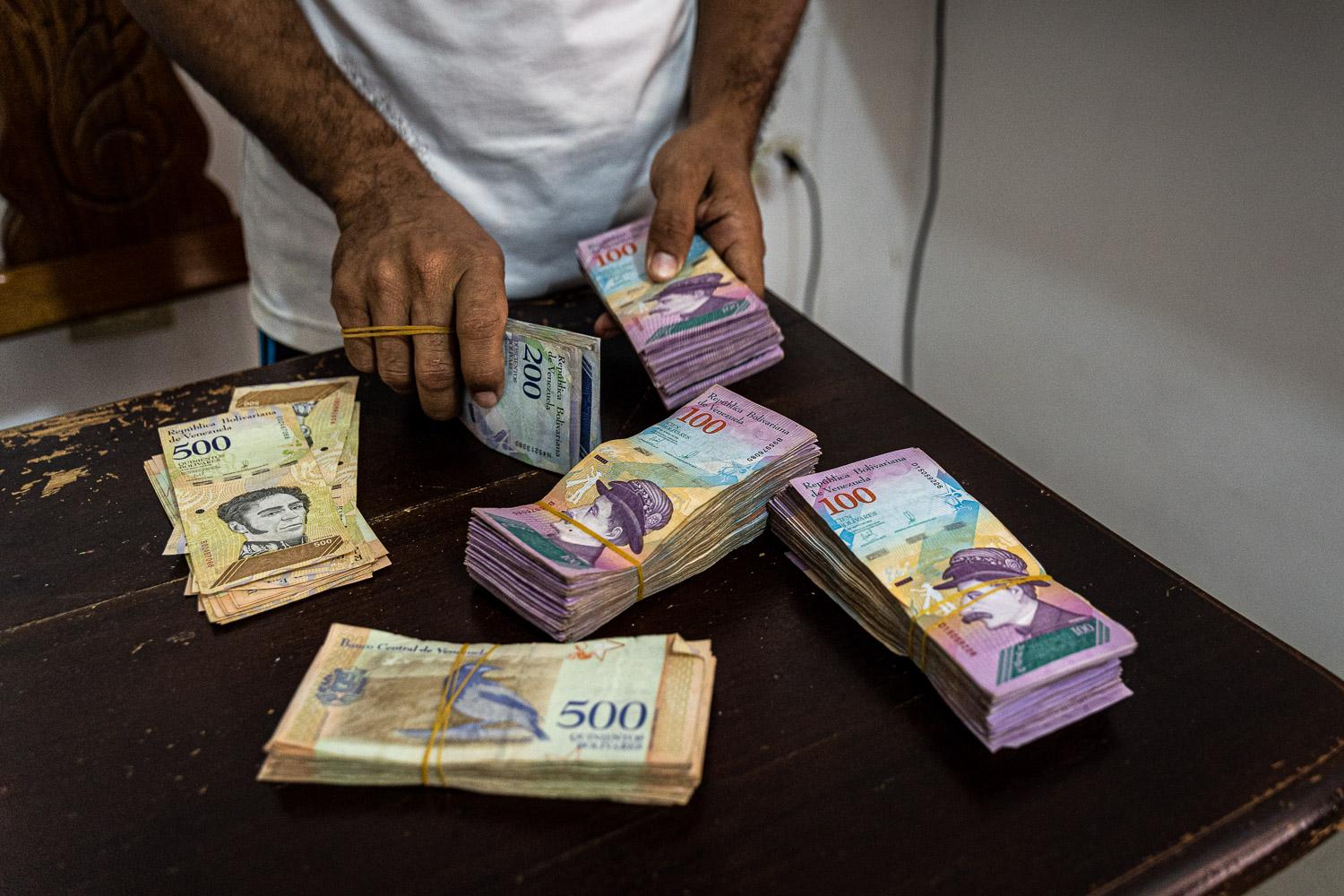 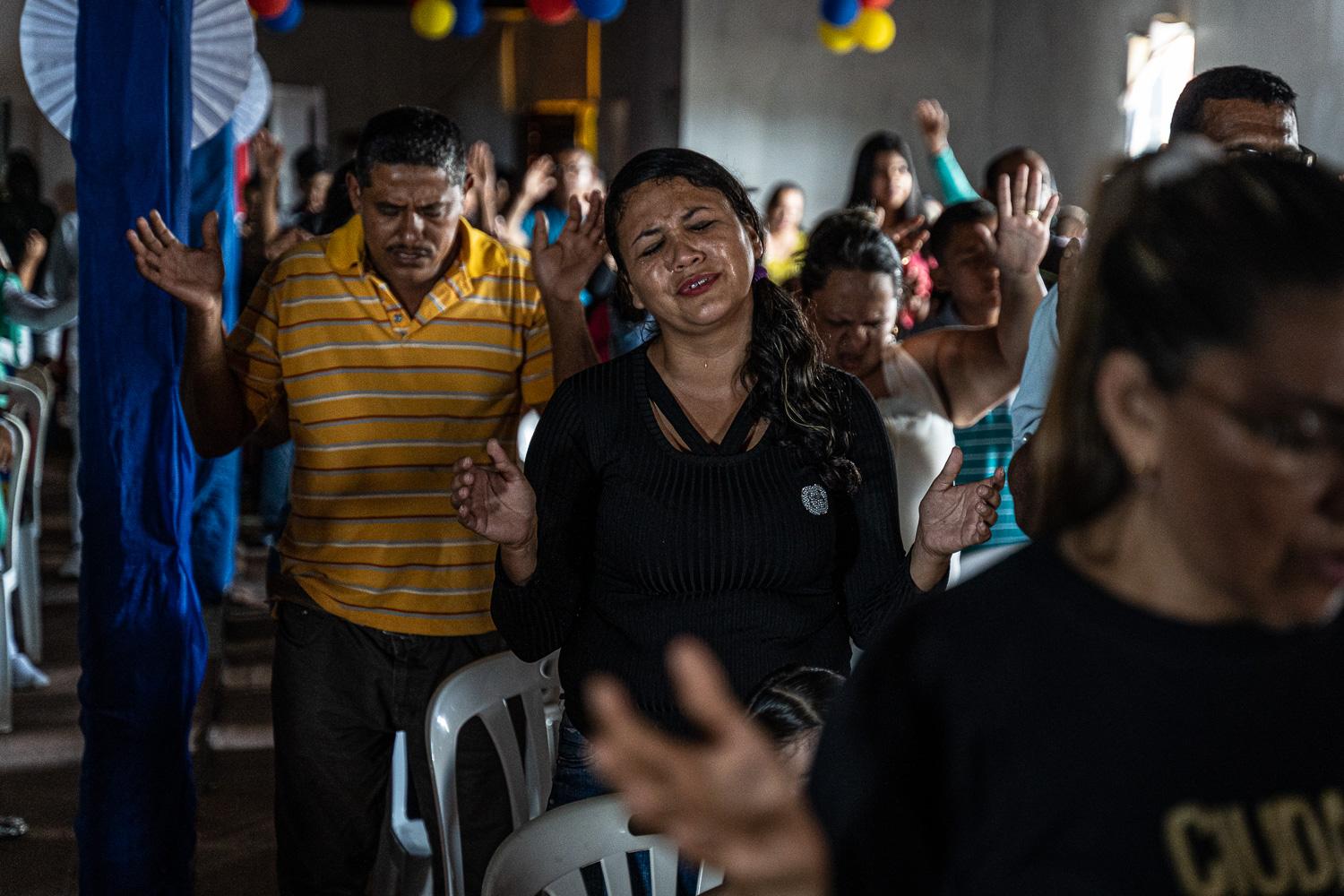 23 of 25 © 2021 Ignacio Marin
Worshipper's cry during Sunday’s service at the Evangelical church in Tumeremo. 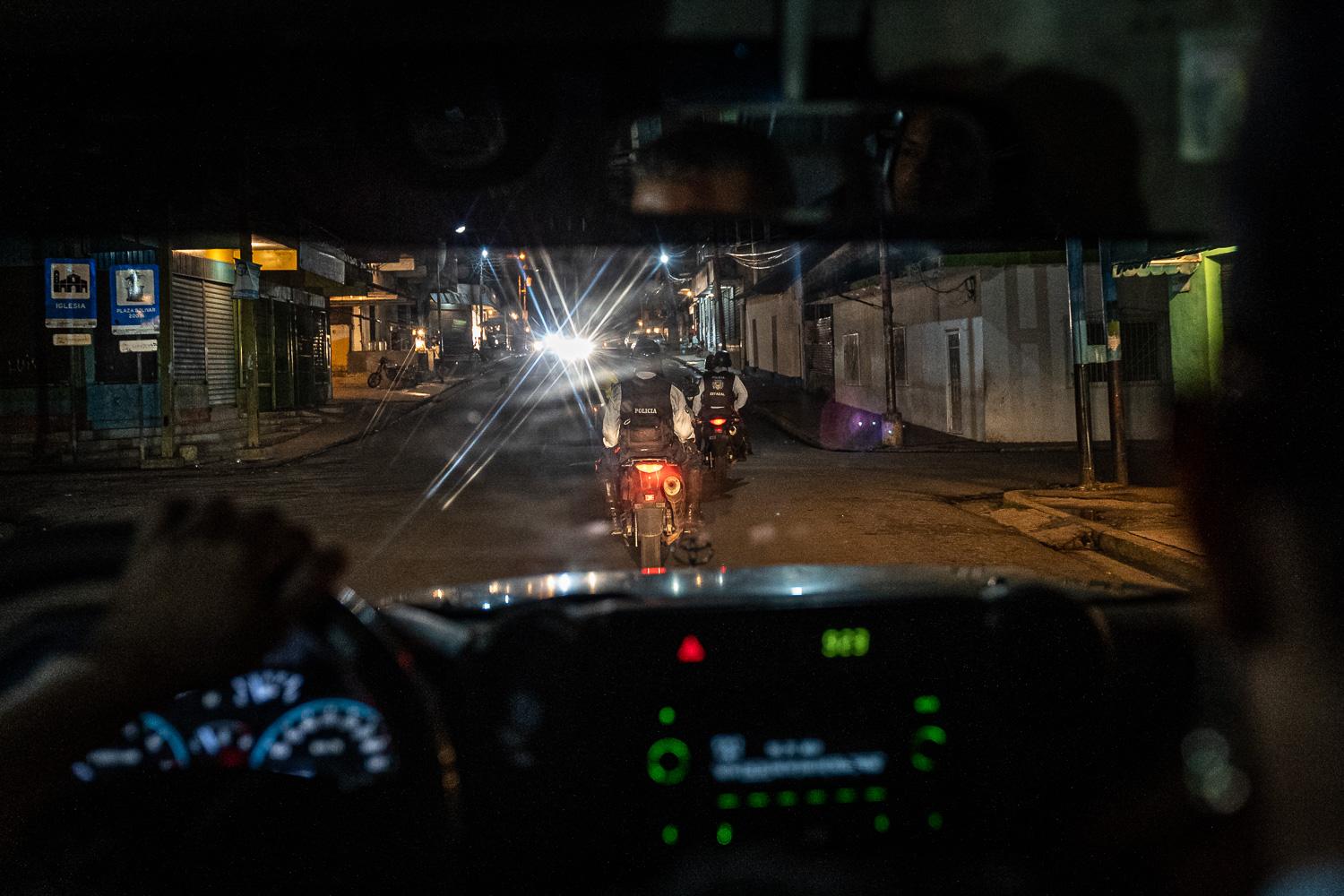 24 of 25 © 2021 Ignacio Marin
Police officers patrol the streets of Tumeremo during the night. Extrajudicial executions by the state security forces have also become a major source of concern: according to the Venezuelan watchdog Commission for Human Rights and Citizenship (Codehciu) 60 people were killed only in the first quarter of 2019. 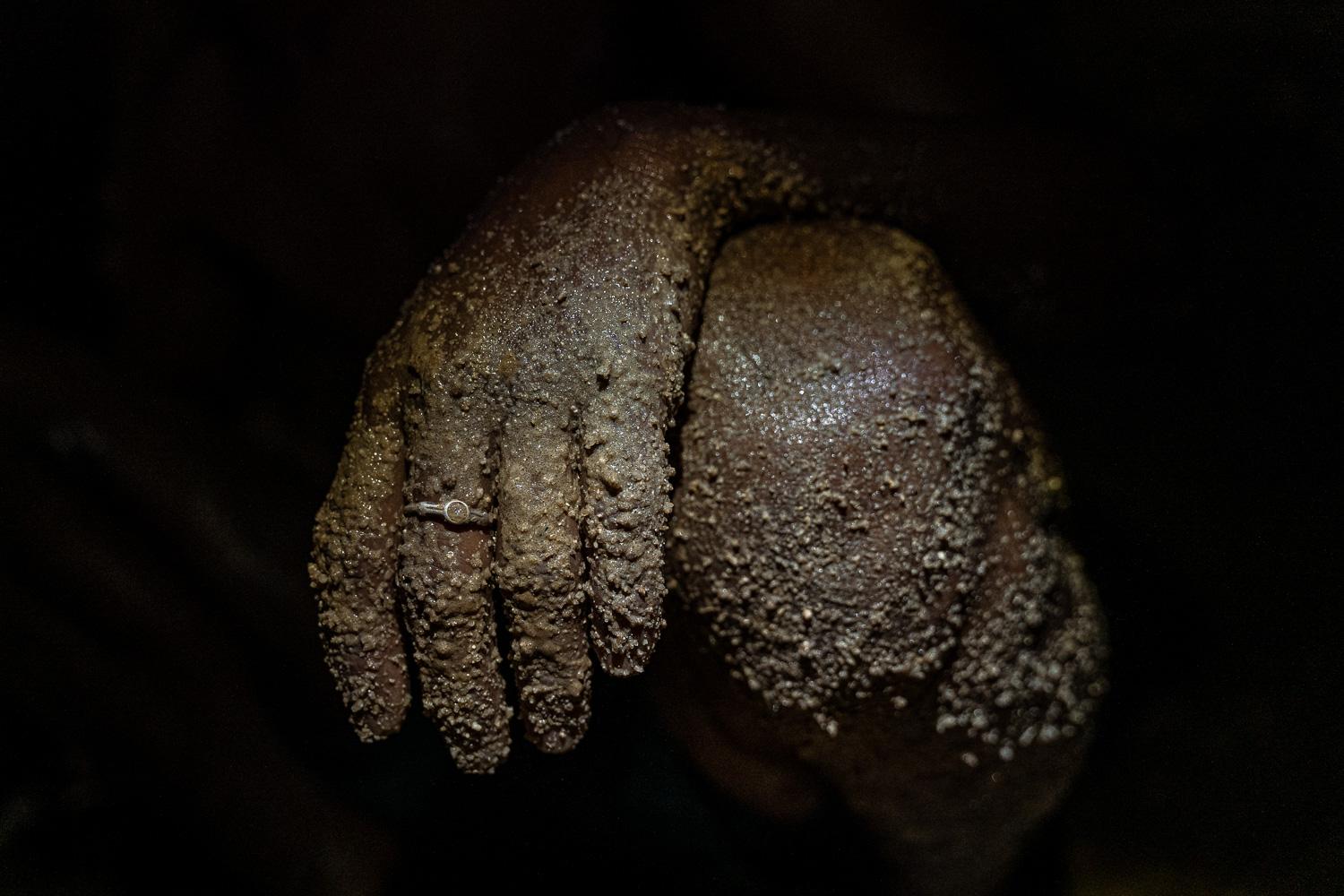 25 of 25 © 2021 Ignacio Marin
Public Story
The law of gold and lead
Credits: ignacio marin
Date of Work: 05/02/19 - 06/07/19
Updated: 11/16/19
Location: Caracas, venezuela
Archived as:  Venezuela
THE LAW OF GOLD AND LEAD
Venezuela used to be the wealthiest nation in South America. Today, is in crisis. The collapse of the oil industry, large scale corruption and the economic sanctions imposed by the US has meant that many venezuelans are now struggling to put food on their tables. While most sectors of the Venezuelan economy have collapsed, rumours of gold riches in Bolivar State, on the border with Brazil, has created a modern-day gold rush. People are descending in hordes to this remote region from every corner of the country. If in 2012 there were about 40,000 miners, today between 300,000 to 500,000 men, women and even children work at the mines. In a medieval fashion, sometimes with their bare hands, they hope to extract a few grams of gold from the earth. For them, to find una grama (a gram of gold) mean to make up to five times the monthly minimum wage.
But they are not the only ones who are seeking out the mines. While the mines have been traditionally run by transnational corporations, now the riches of gold have also caught the attention of armed gangs, sindicatos (crime syndicates) and foreign guerrillas like the Colombian ELN. At the same time, Maduro’s regime has found in gold the last lifeline for keeping his isolated government afloat. Tension between these actors for the control of the mines has spiked recently, resulting in an epidemic of violence never seen before. According to the Observatorio Venezolano de Violencia (OVV), the two most violent municipalities of the country are in Bolivar State. Municipio Sifontes (Tumeremo) had 199 violent deaths for every 100,000 people in 2018, yet many believe that the real figure is sure to be much higher as many murders go unreported.
As Venezuela spirals into lawlessness, the police and army are frequently replaced by gangs and armed groups. They alone administer justice: their own justice. At the Bolivar square at El Callao, a human head was found inside a bag. It came with a list of demands by the local criminal gang, including a detailed explanation of how the extortion has to be paid in gold on every 15th and 30th day of the month. In Tumeremo, doctors now frequently treat patients with gunshot wounds to their hands. It is the penalty for stealing, according to the law imposed by the gangs.
The locals have a saying, “it is the law of gold and lead”.
. . .

By Ignacio Marin / Dhaka — A DROWNING LAND In Kalabogi, a small village at the Sundarbarns, in the coastal region of the Bay of..
Nov 16, 2019