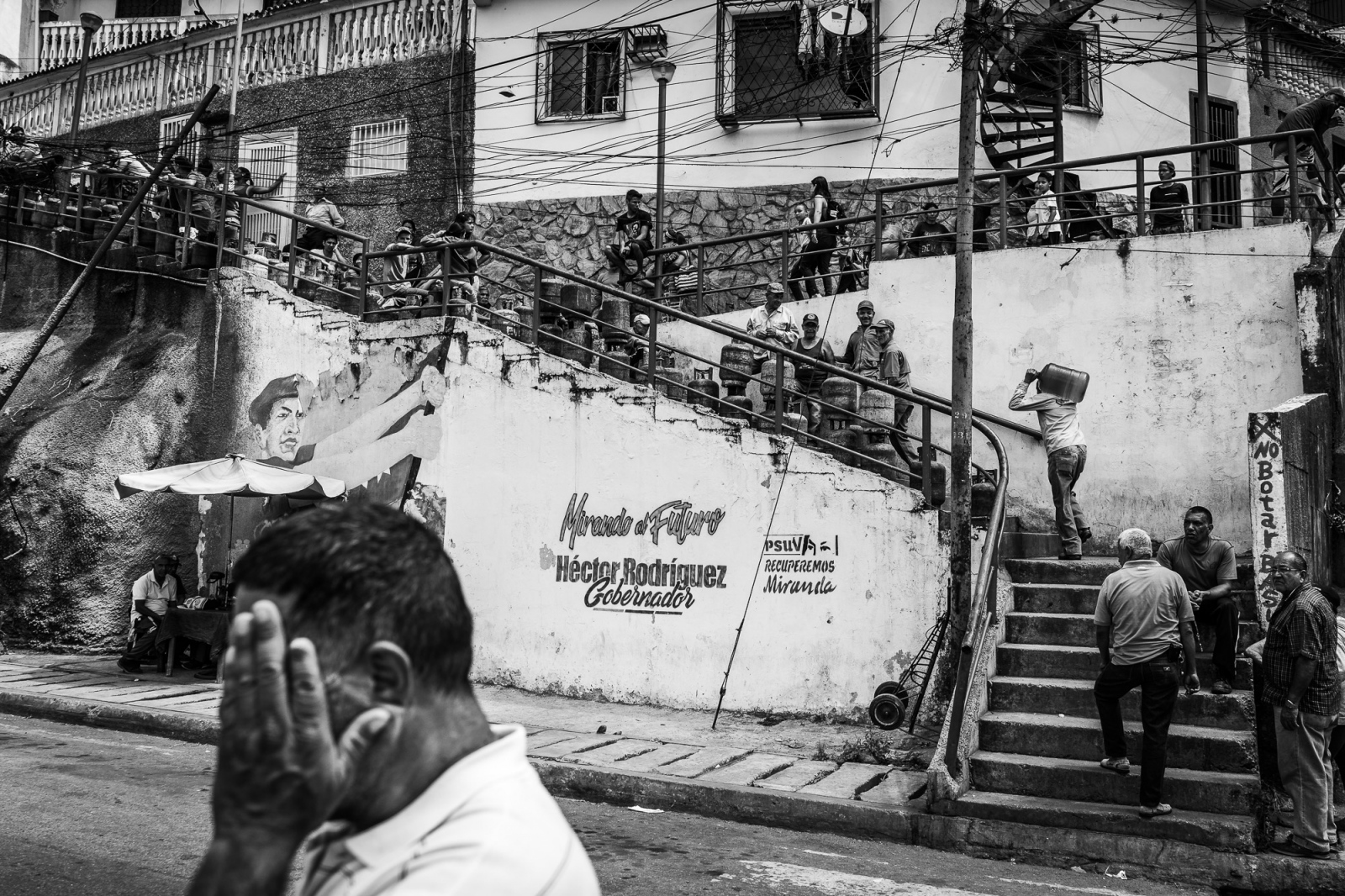 1 of 29 © 2021 Ignacio Marin
People queue up in the morning to buy gas. Endless queues have become a daily life reality for Venezuelans, trying to find scarce products. In many cases, the cargo wouldn’t arrive or is not enough for everyone. Sometimes, people have to try at several shops in order to complete their groceries or home supplies. 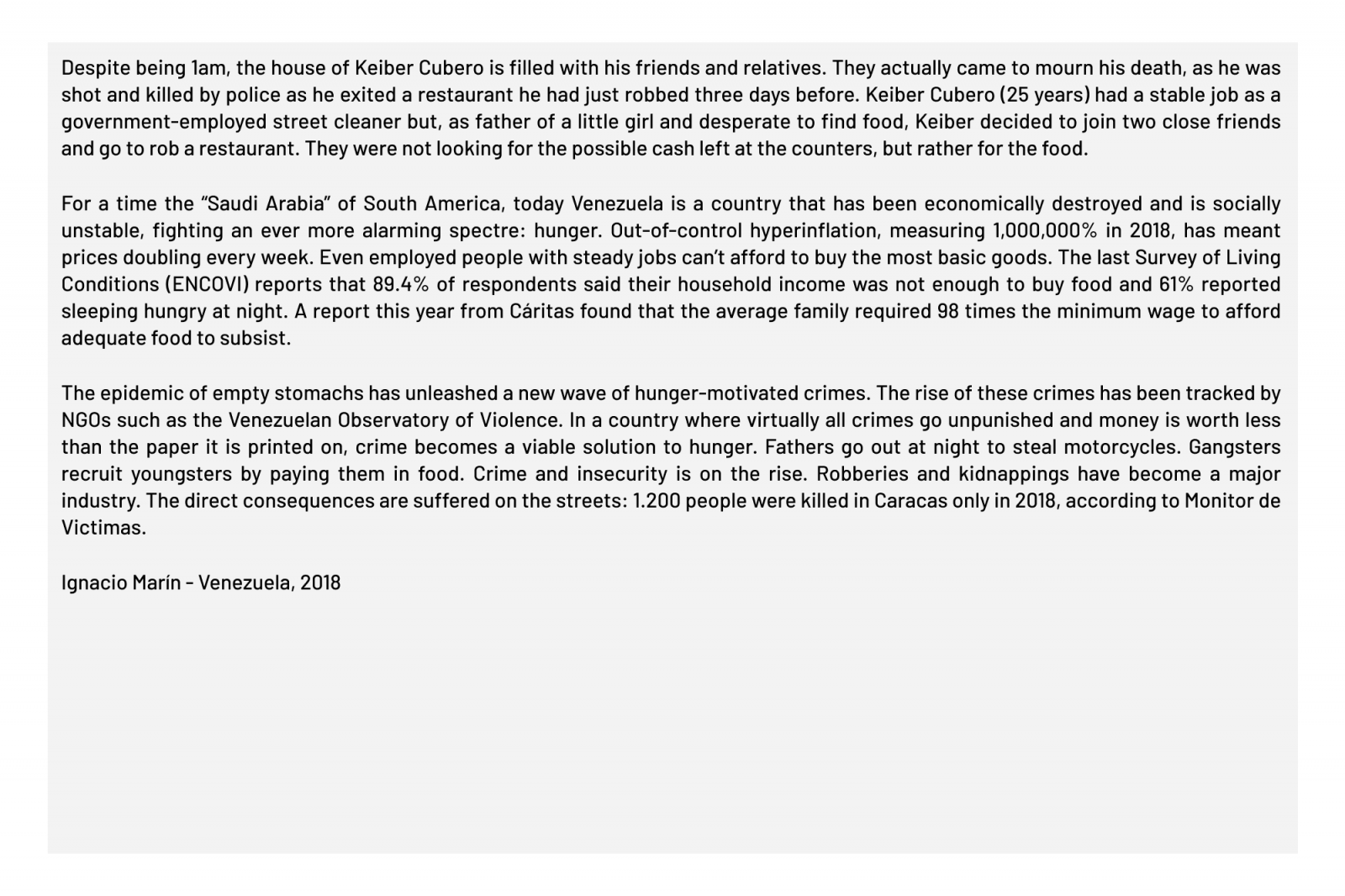 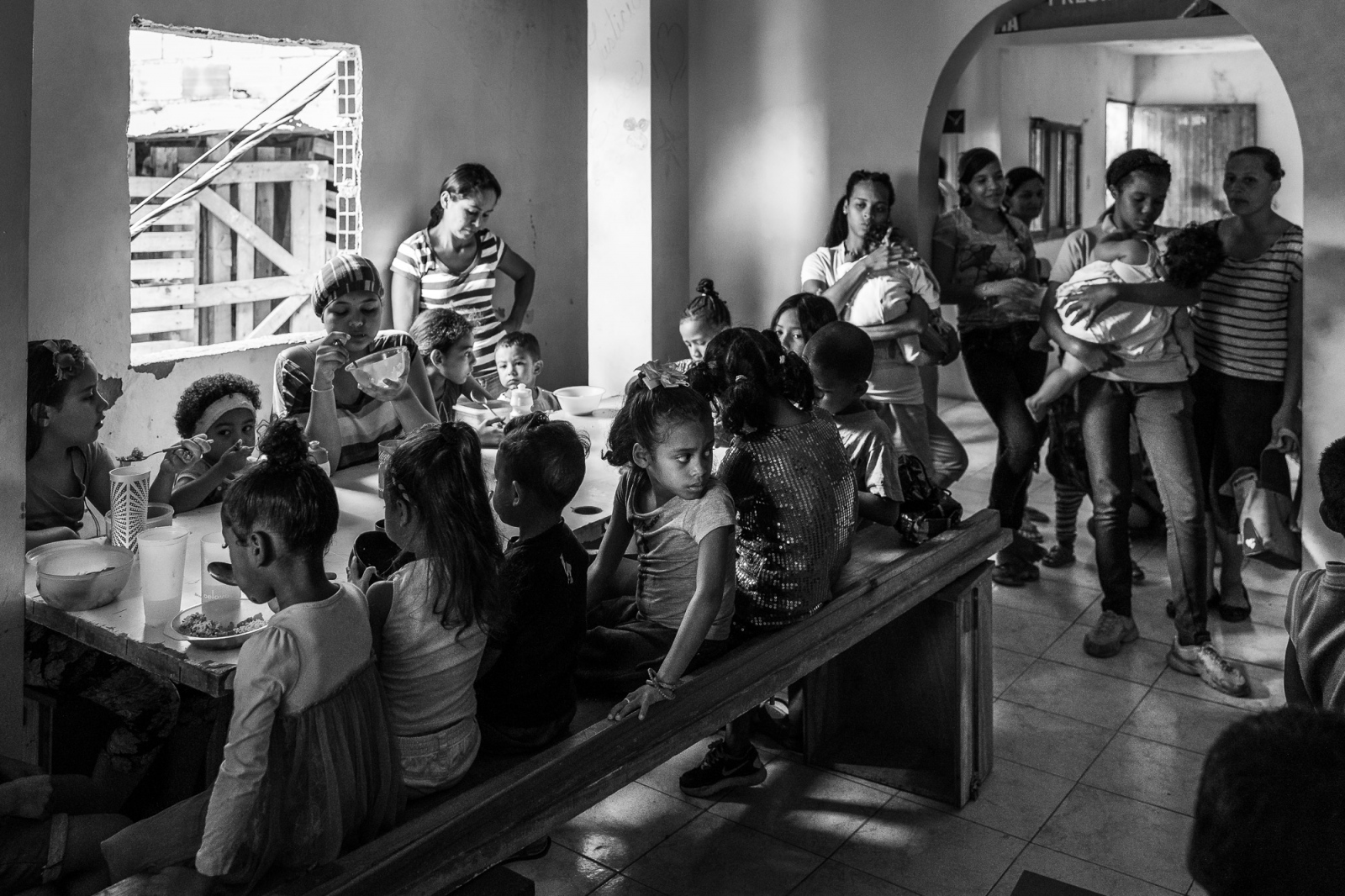 3 of 29 © 2021 Ignacio Marin
Children and pregnant women eat at a solidarity kitchen run by Alimenta la Solidaridad, a local NGO working in Petare, a slum in East Caracas. In Petare, many families can’t afford to buy enough food and often children only make one meal a day. According to report from Cáritas (2018), 65% of the children they worked with had different levels of malnutrition. 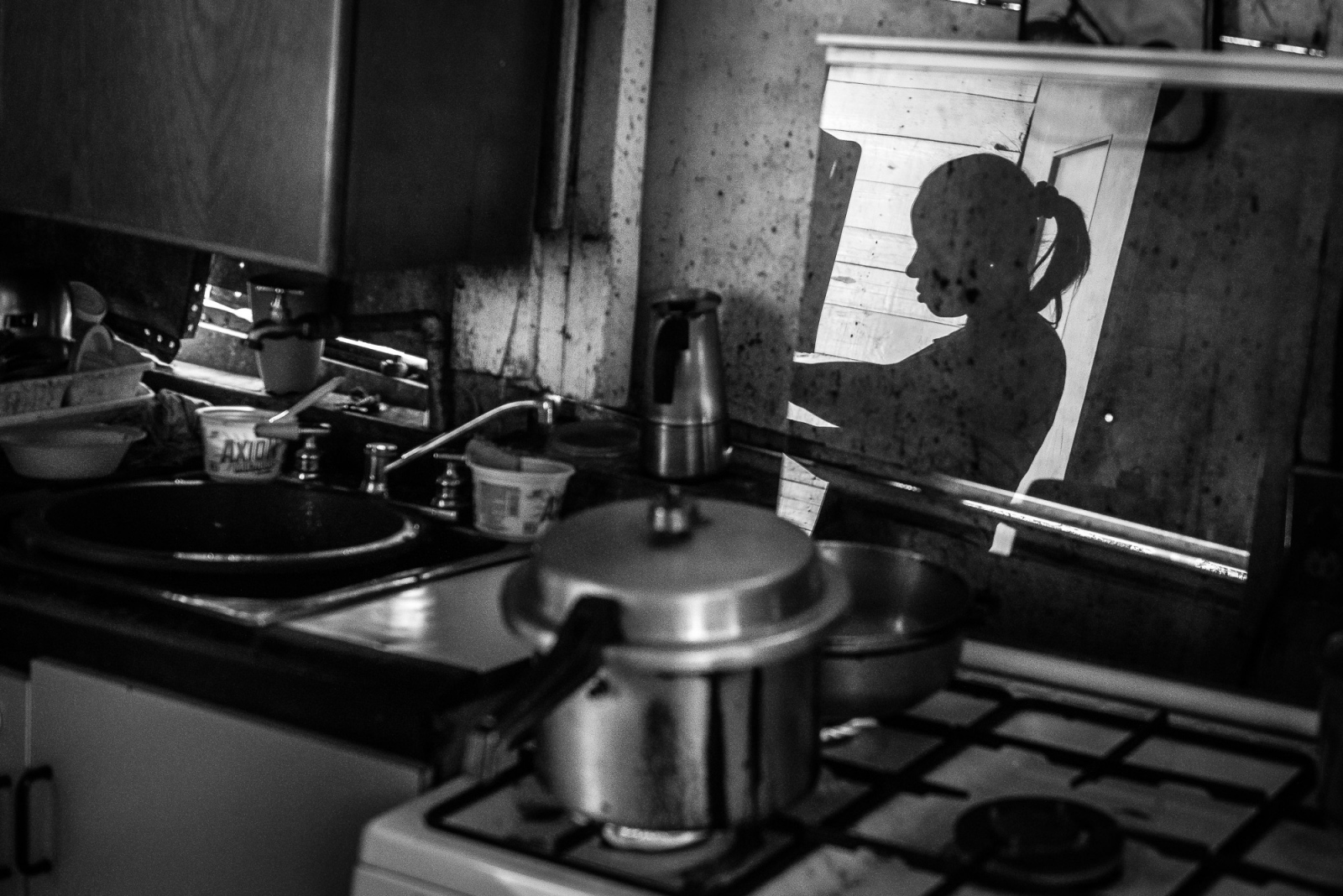 4 of 29 © 2021 Ignacio Marin
Mayra -37 years old- prepares food in her improvised home in Petare, Caracas. Her younger daughter died of hunger when she was only 1 year old. “When I took her to the hospital the doctor said I should give her chicken or meat but, how could I afford to buy chicken?” 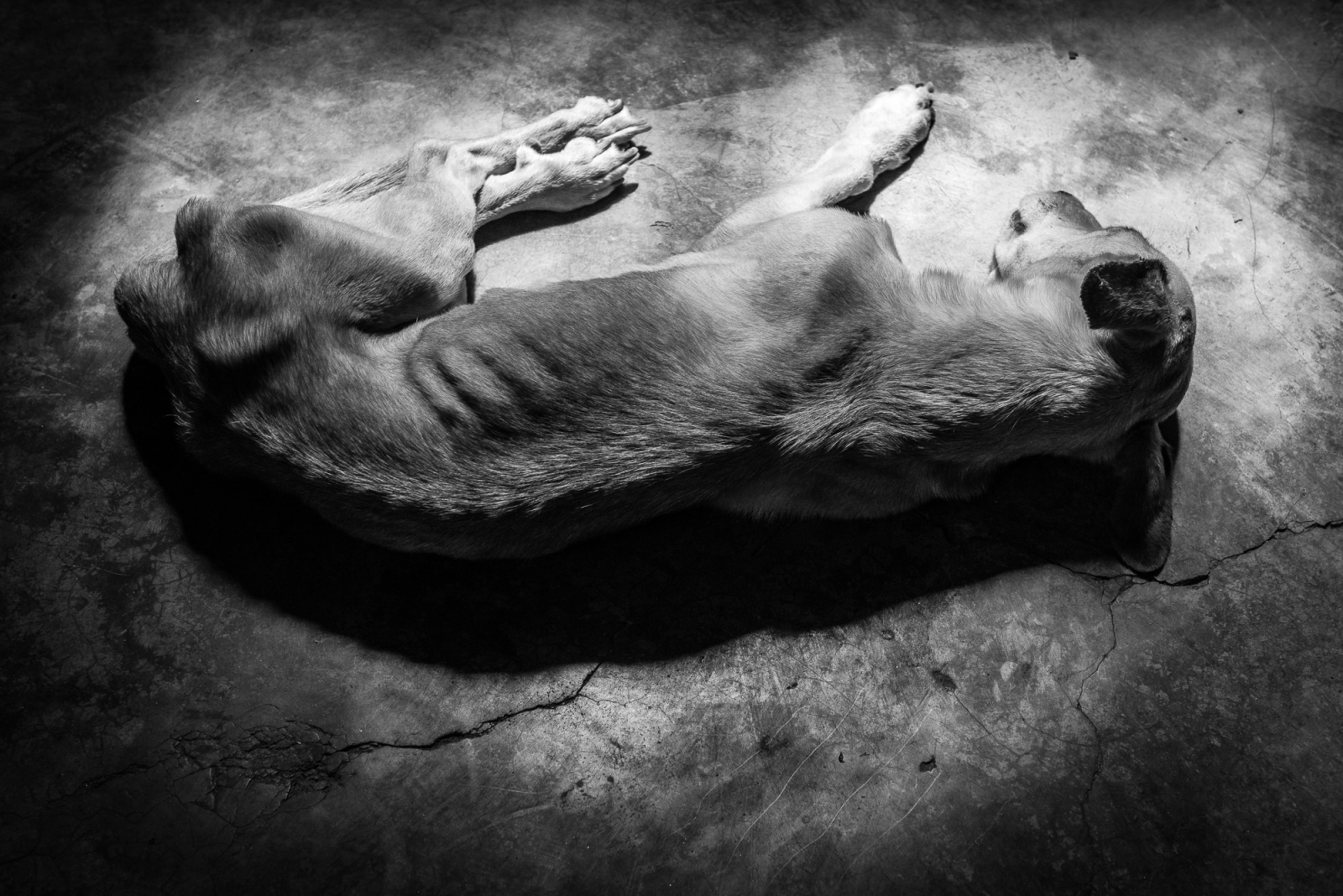 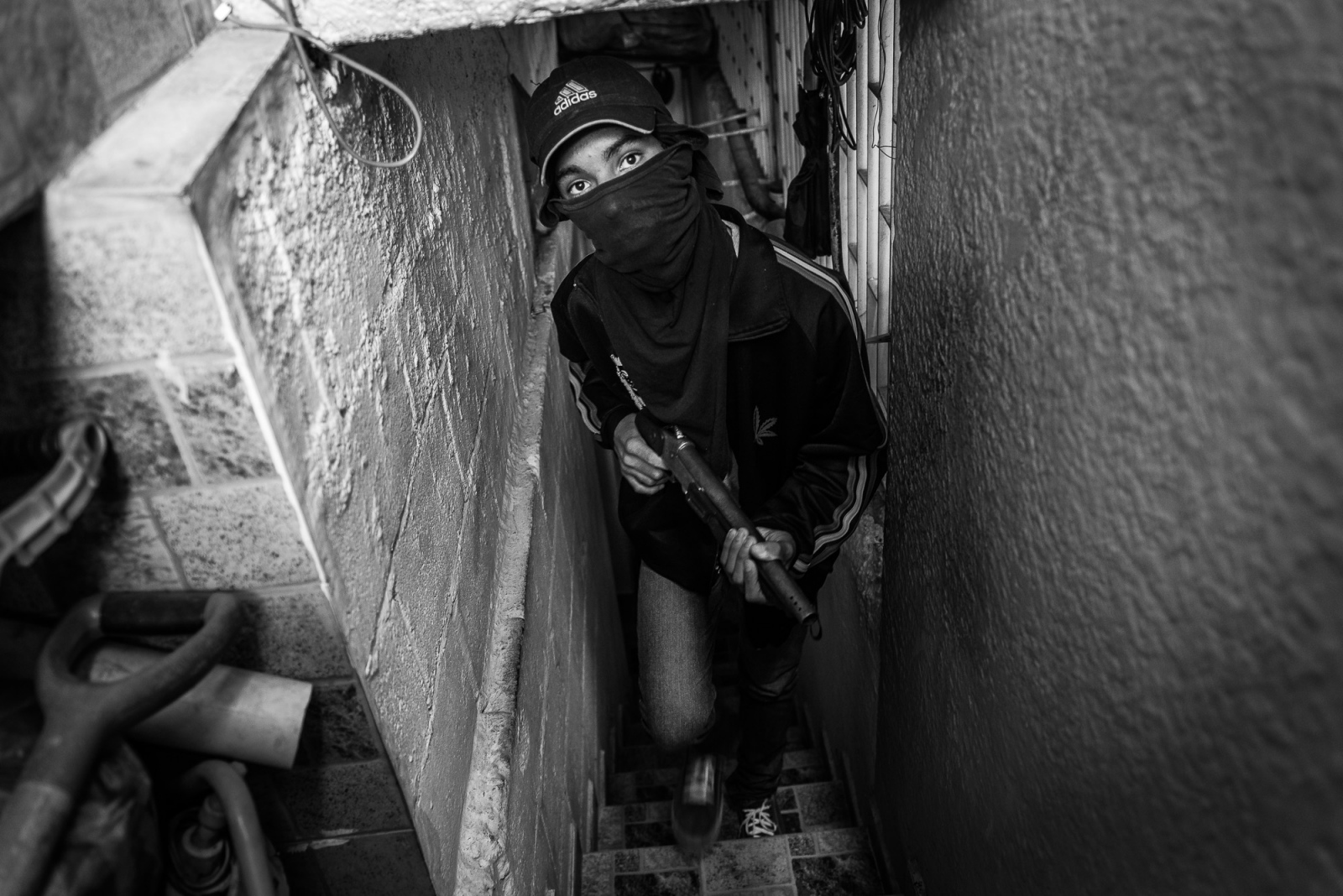 6 of 29 © 2021 Ignacio Marin
Freddy -16 years old- a member of a kidnappers gang, at a safe house in a slum in Caracas. He joined the gang when he realized “things were hard at home. I saw my mum struggling to buy flour, rice, anything. That’s when I decided to join the band, so we can have food for my little brothers. I started as a thief but now I carry a gun for bigger hits”. 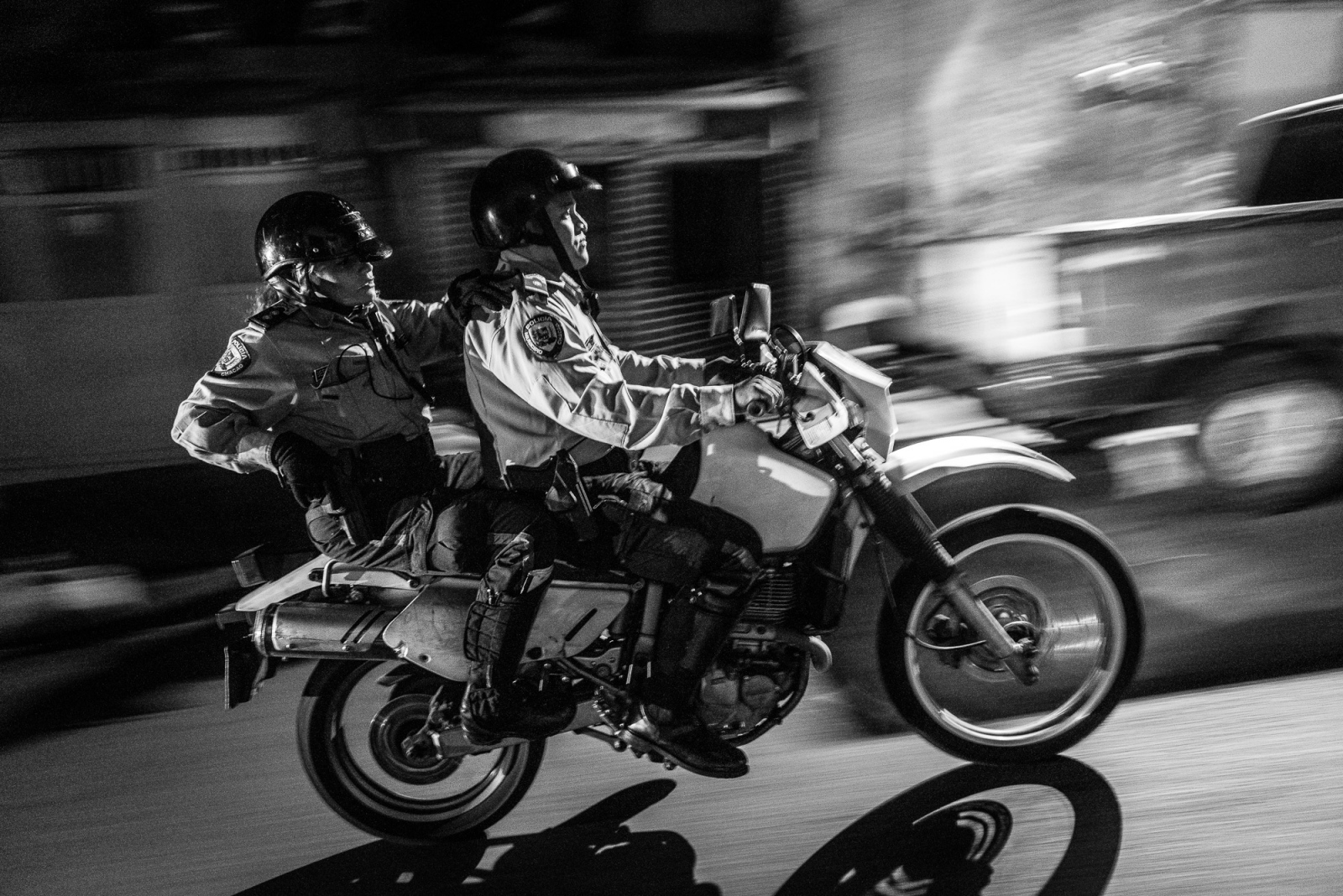 7 of 29 © 2021 Ignacio Marin
Police during an operation in the neighborhood of La Cruz. The economic crisis and the soaring inflation has lead to a rise in crime and insecurity in the country. According to the OVV, Venezuela is now the second most dangerous country in the world. 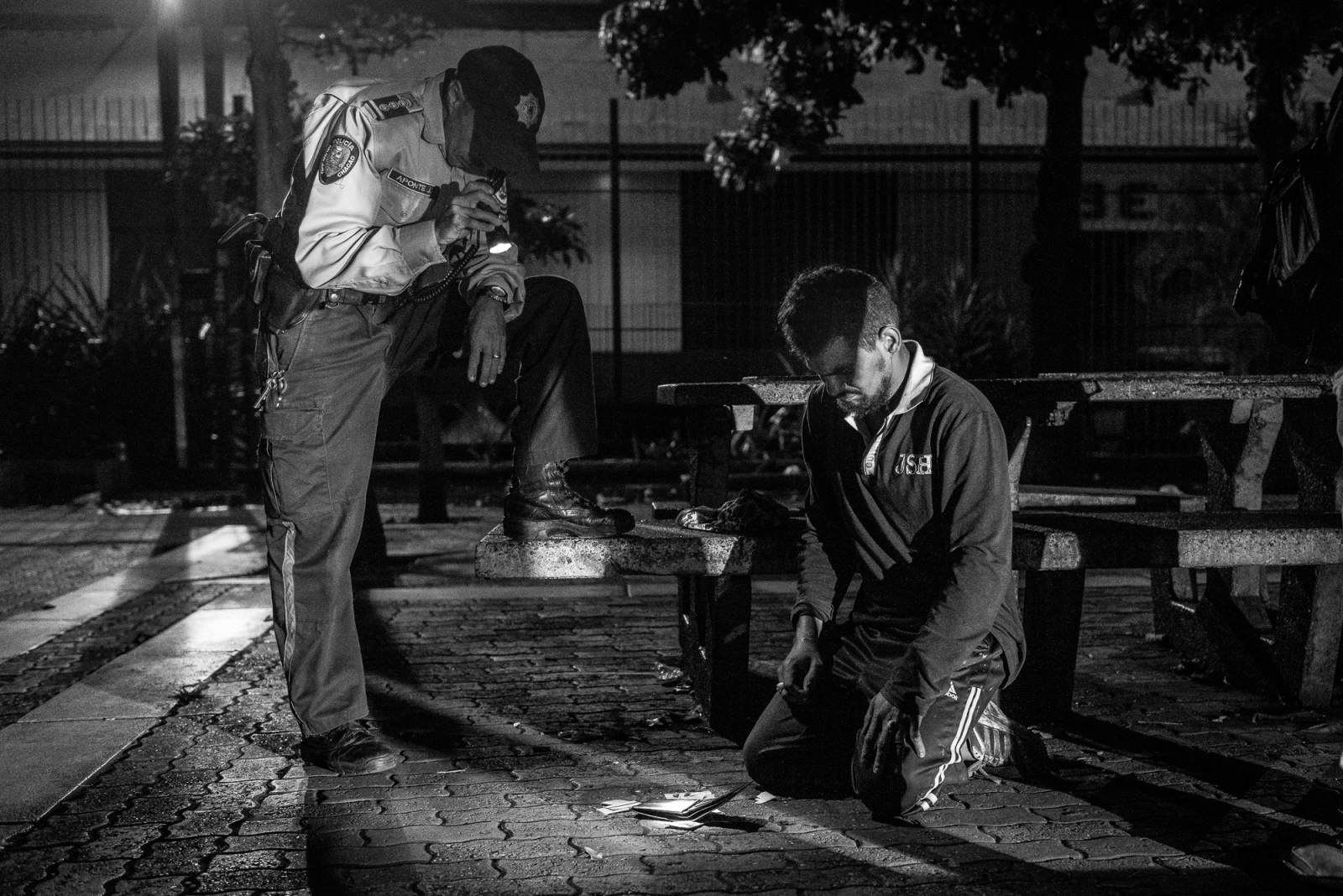 8 of 29 © 2021 Ignacio Marin
A policeman searches a homeless man suspected of stabbing a person in order to steal from him. Robberies have become a major cause of concern since they often become homicides when victims who resist are killed. 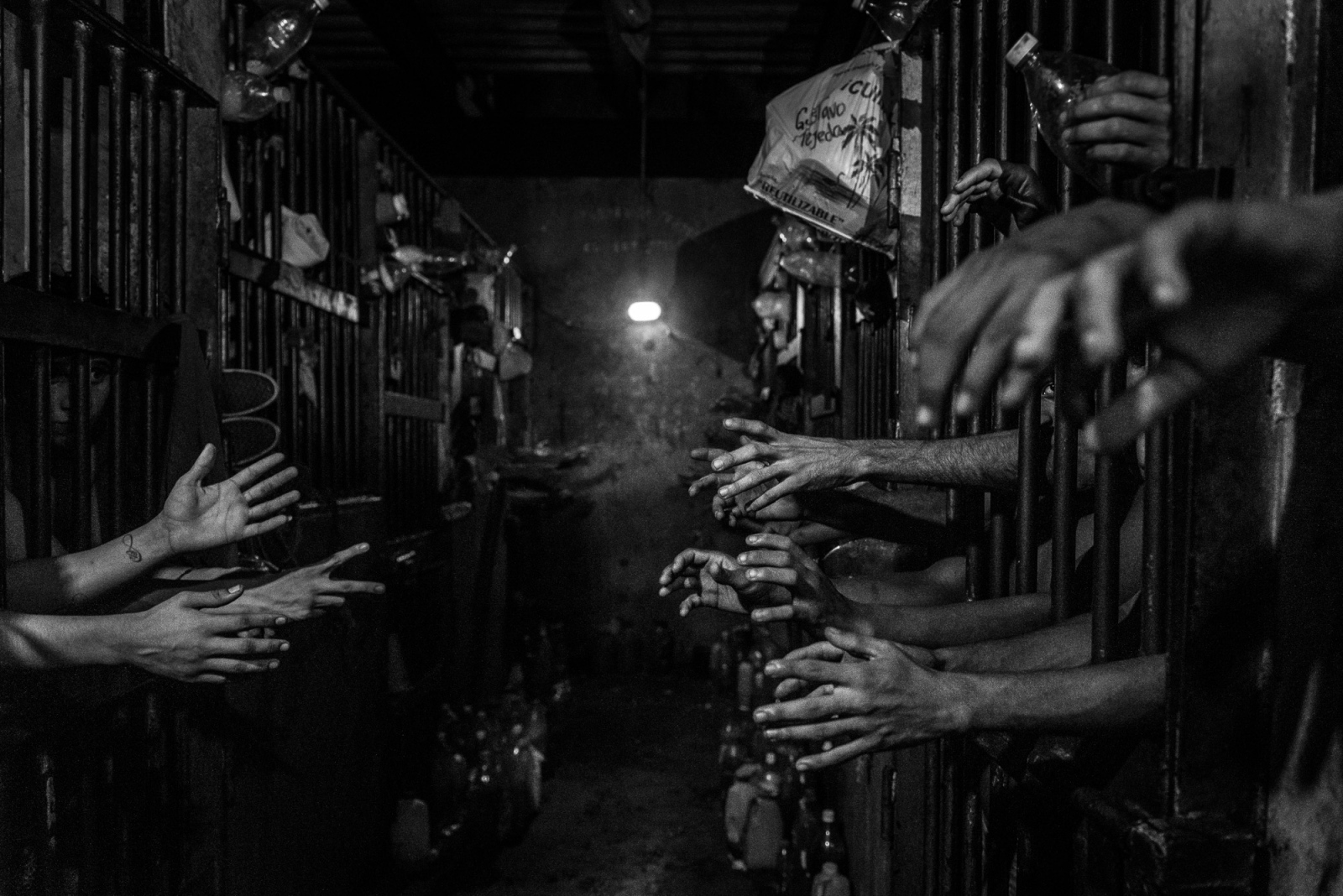 9 of 29 © 2021 Ignacio Marin
Prisoners begging for food and water at their cells in a police station. Many of them said they had a regular job but turned to crime because of the economic crisis and the impossibility of bringing food back home. 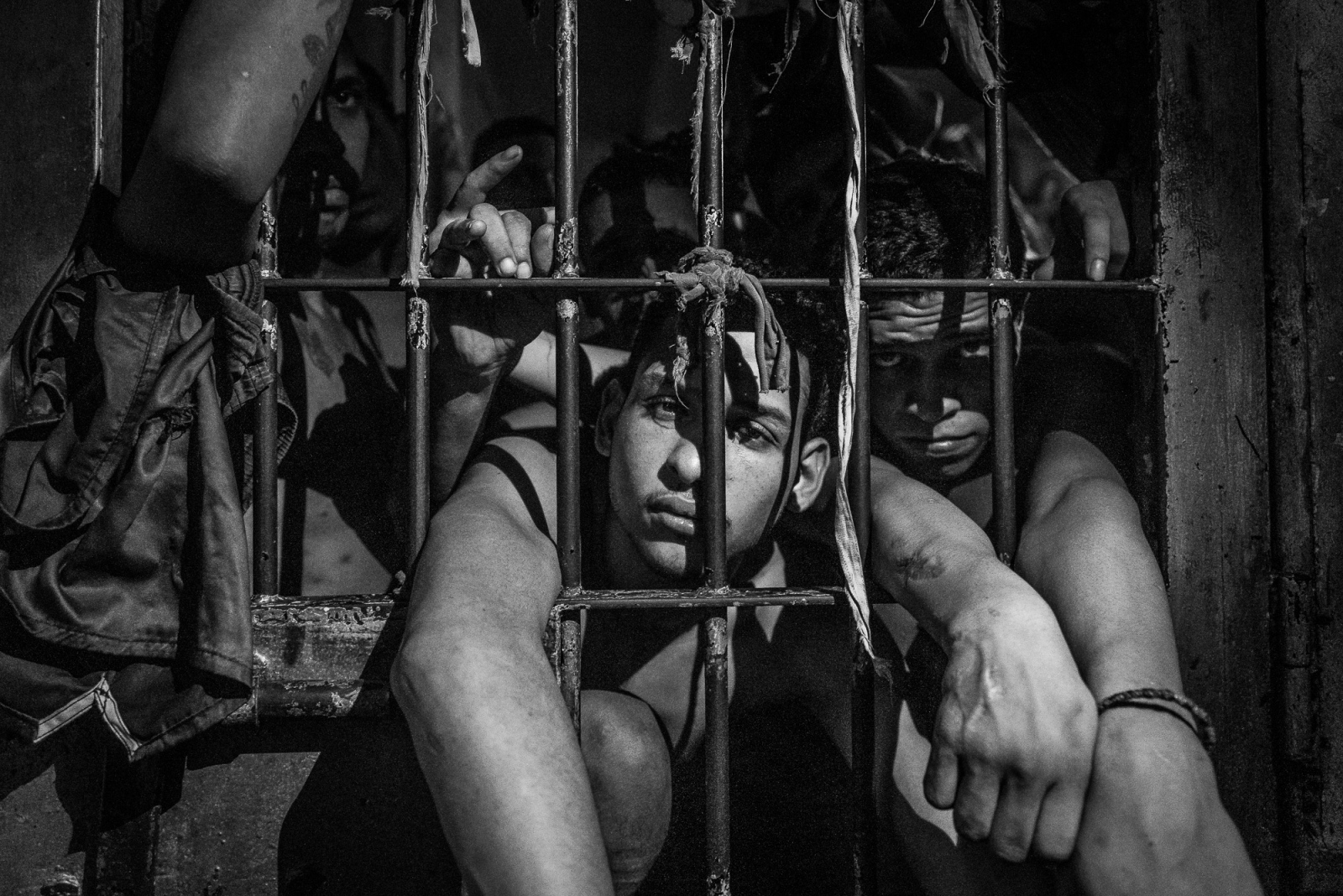 10 of 29 © 2021 Ignacio Marin
Inmates in their cells at a police station. Inmates rely on their families to provide them with food, and there are cases of severe malnutrition. 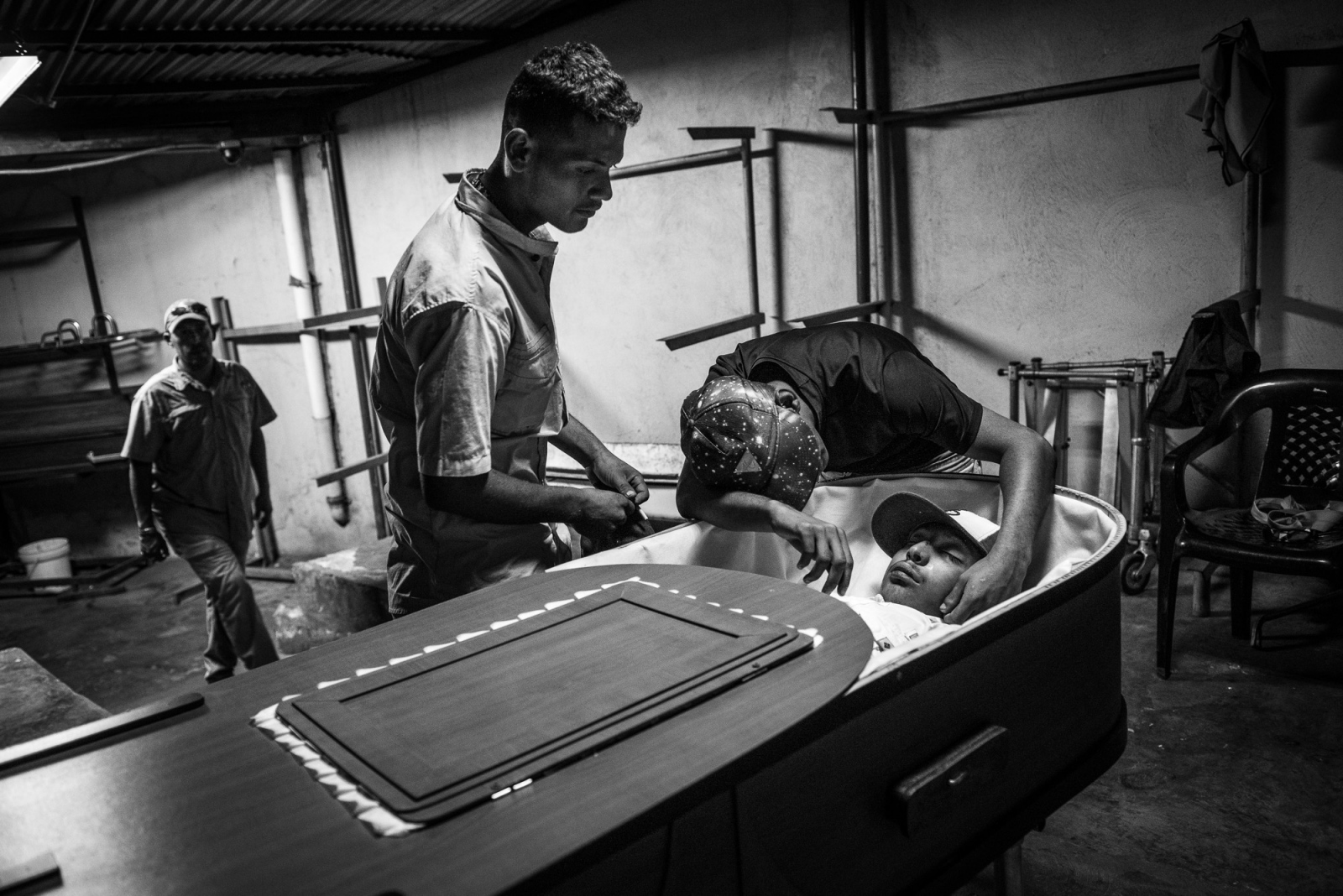 11 of 29 © 2021 Ignacio Marin
The younger brother of Keibe Cubreo mourns his death at a funeral house in Caracas. Keiber Cubero was executed by the police after robbing a restaurant in order to provide for his family. According to the non-govermental organization Monitor de Victimas, 21% of total deaths are dealt by the security forces. 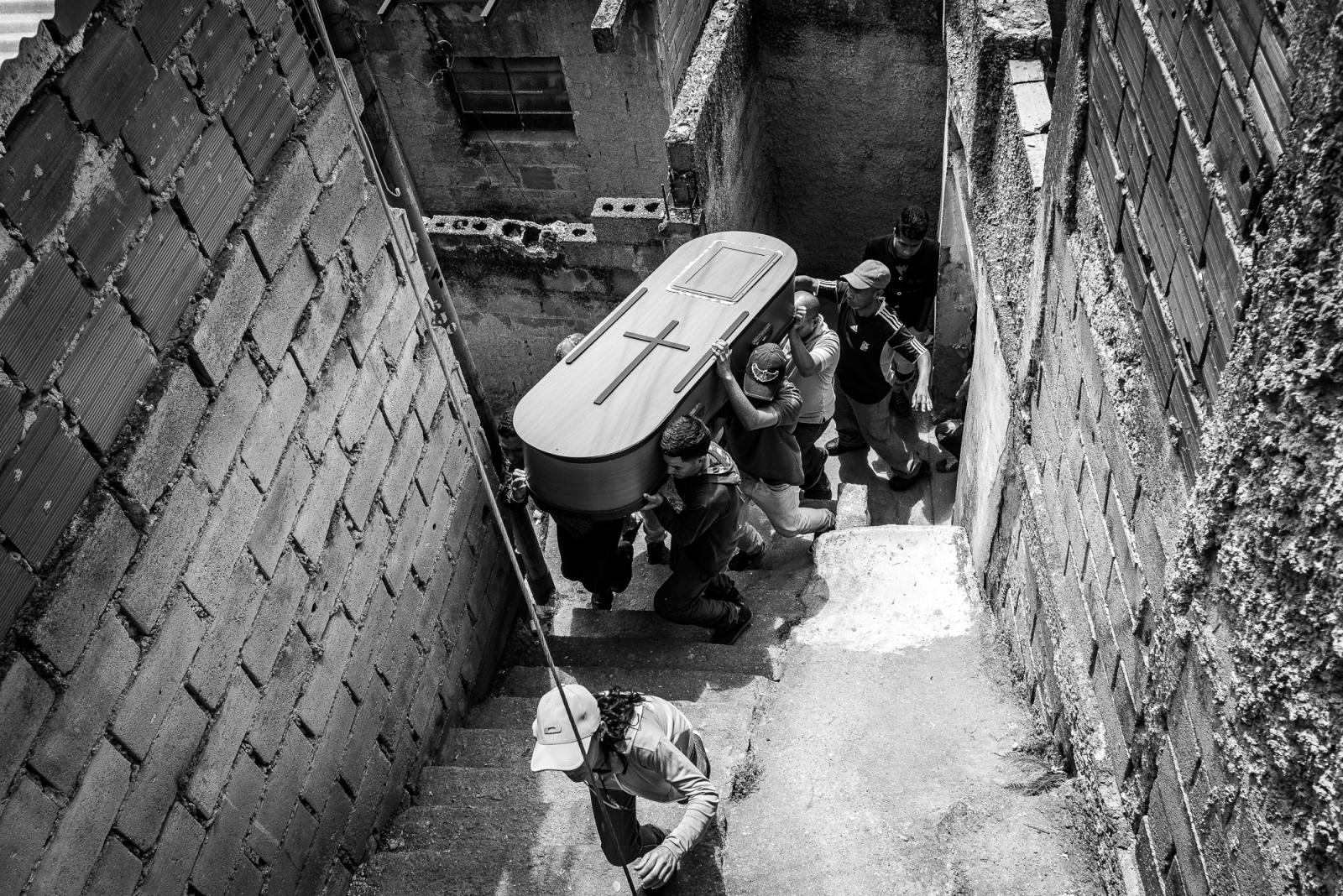 12 of 29 © 2021 Ignacio Marin
Keiber Cubero’s dead body is carried by friends on it’s way to the cemetery. Keiber was executed by the police after robbing a restaurant in order to provide for his family. 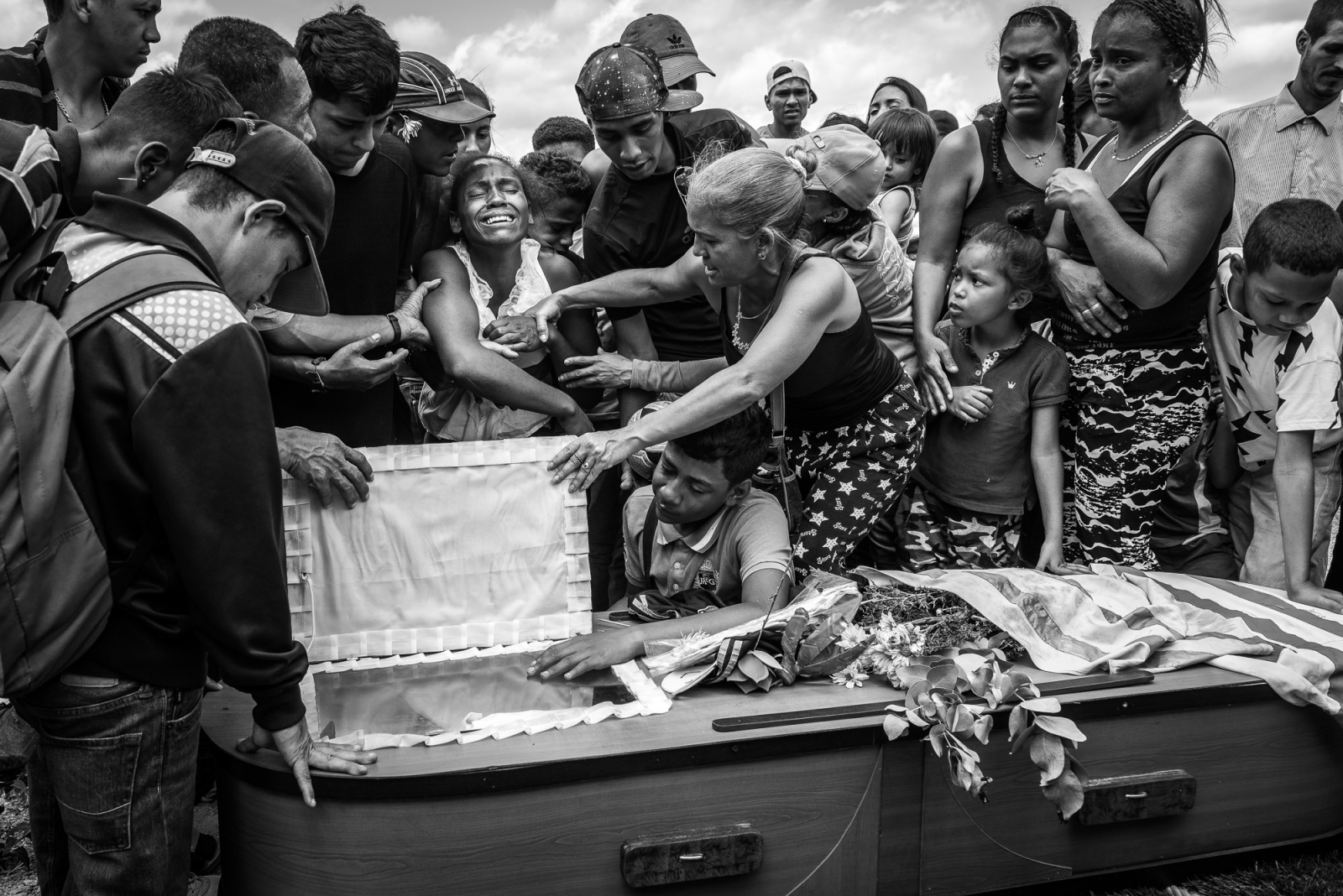 13 of 29 © 2021 Ignacio Marin
A woman cries during the funeral of her husband, Keiber Cubero -25 years old-. Father of a little girl and struggling to find food, Keiber went with two other friends to rob a restaurant during the night. They were caught and killed by the police. 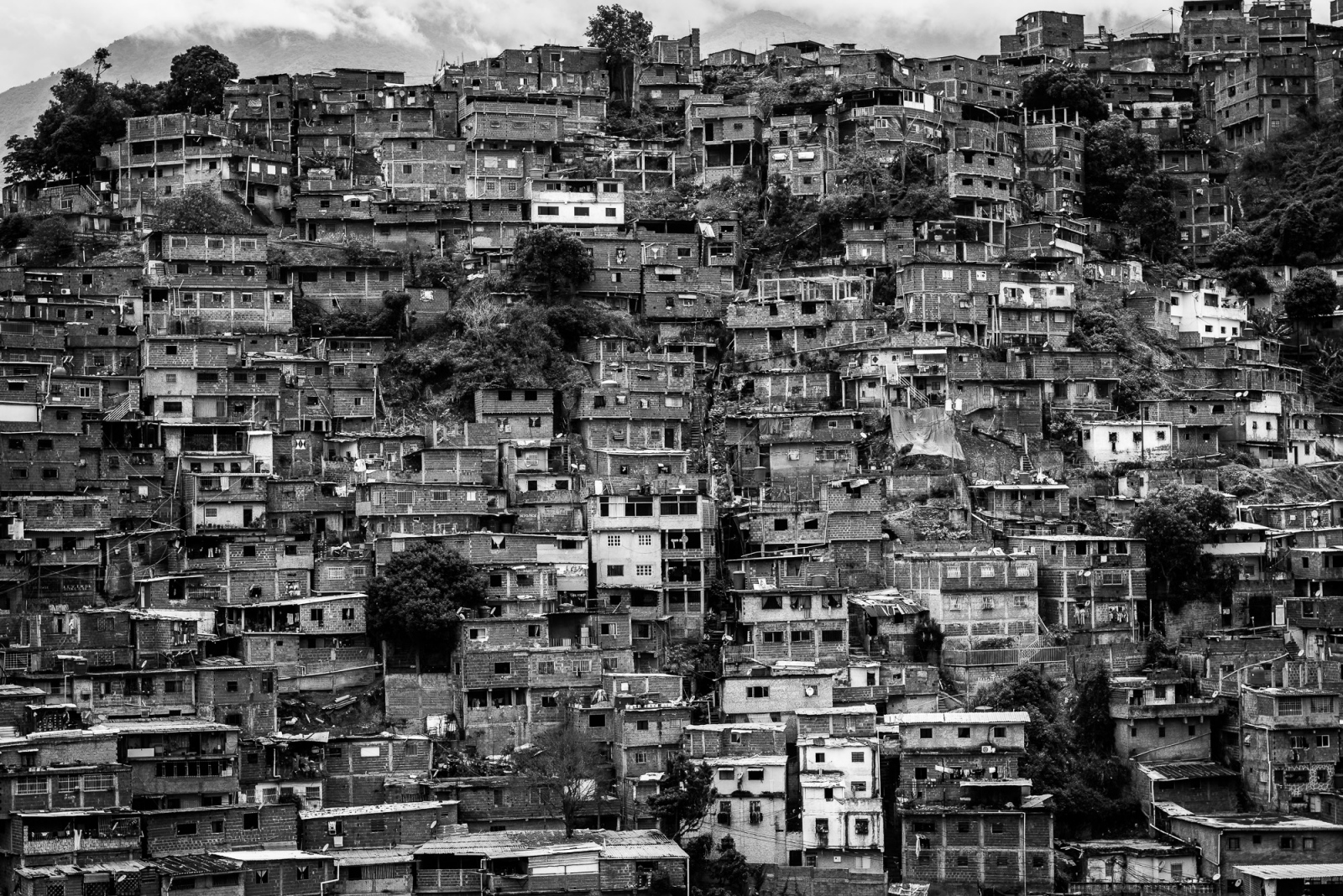 14 of 29 © 2021 Ignacio Marin
The neighbourhood of Petare, in Caracas. With a population of over one million people, it’s Venezuela’s most dangerous slum. A majority of violent crimes occur in the slums, home of the most vulnerable and those hit hardest by the crisis. 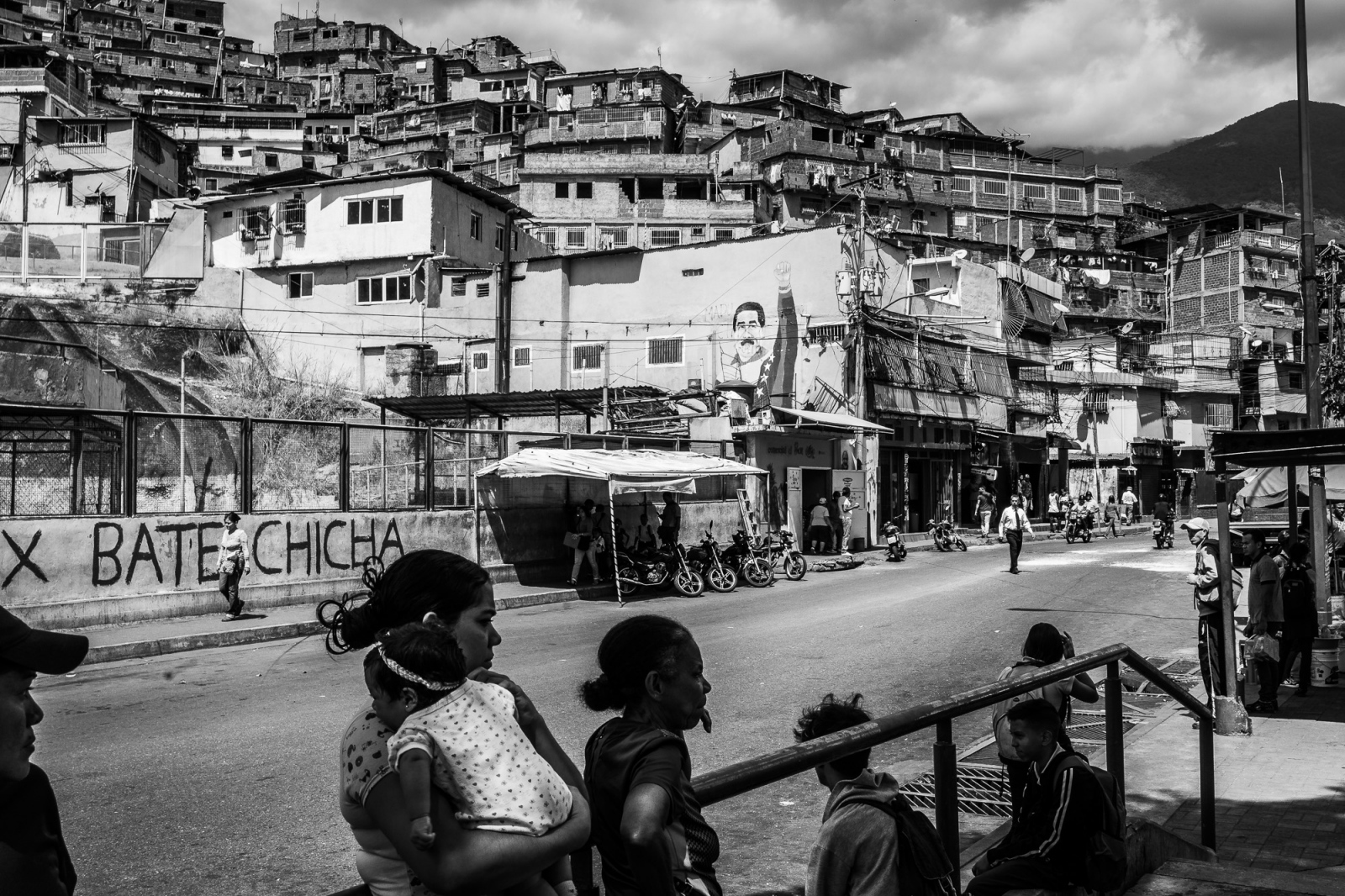 15 of 29 © 2021 Ignacio Marin
People waits at the entrance of the José Félix Ribas neighborhood, in the Petare slum (eastern Caracas). 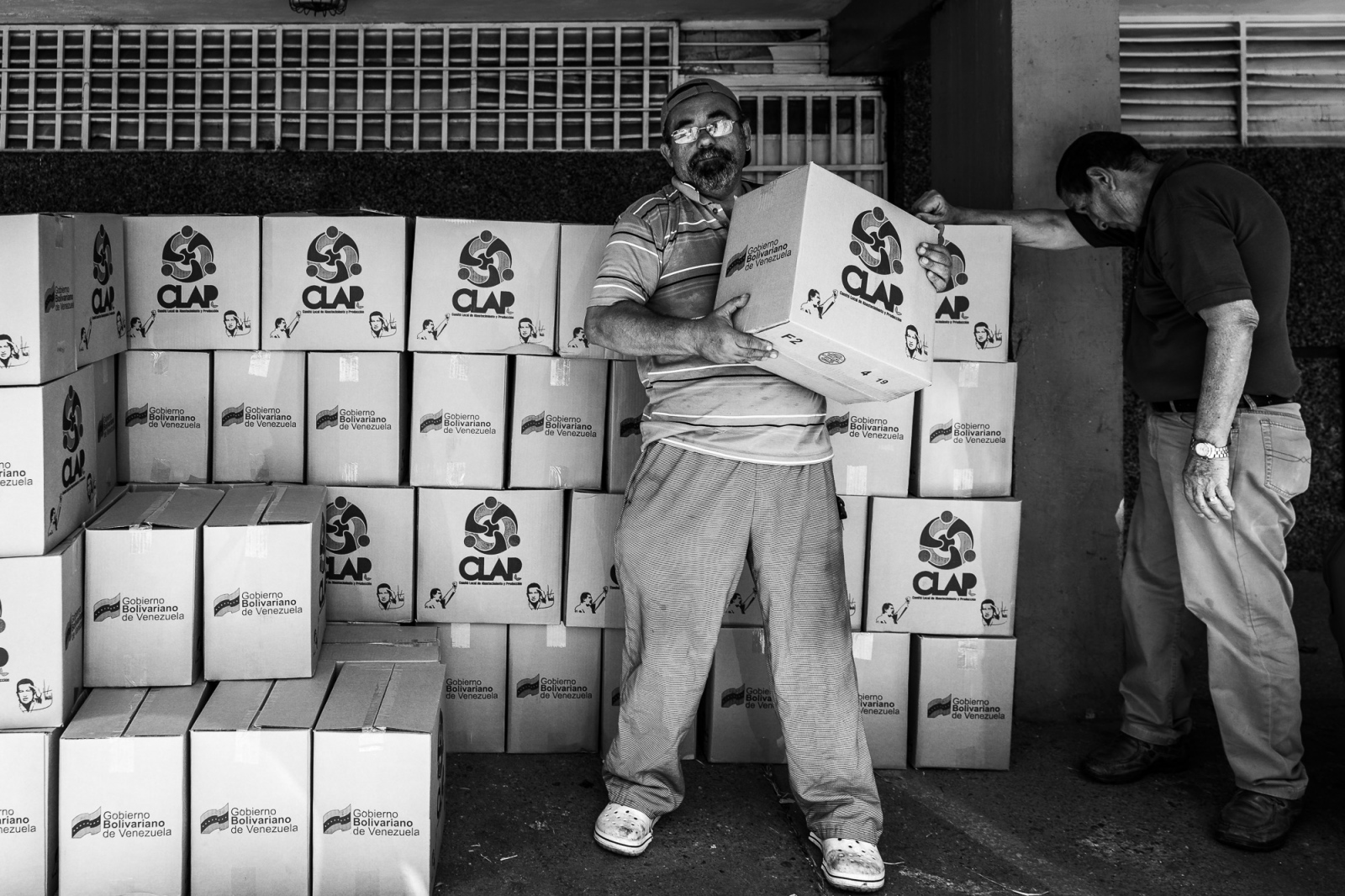 16 of 29 © 2021 Ignacio Marin
Two man carry CLAP  boxes, at the slum neighborhood of El Valle. The CLAP box contains basic food supplies and is one of the measures of the socialist government to fight against the “economic war”. 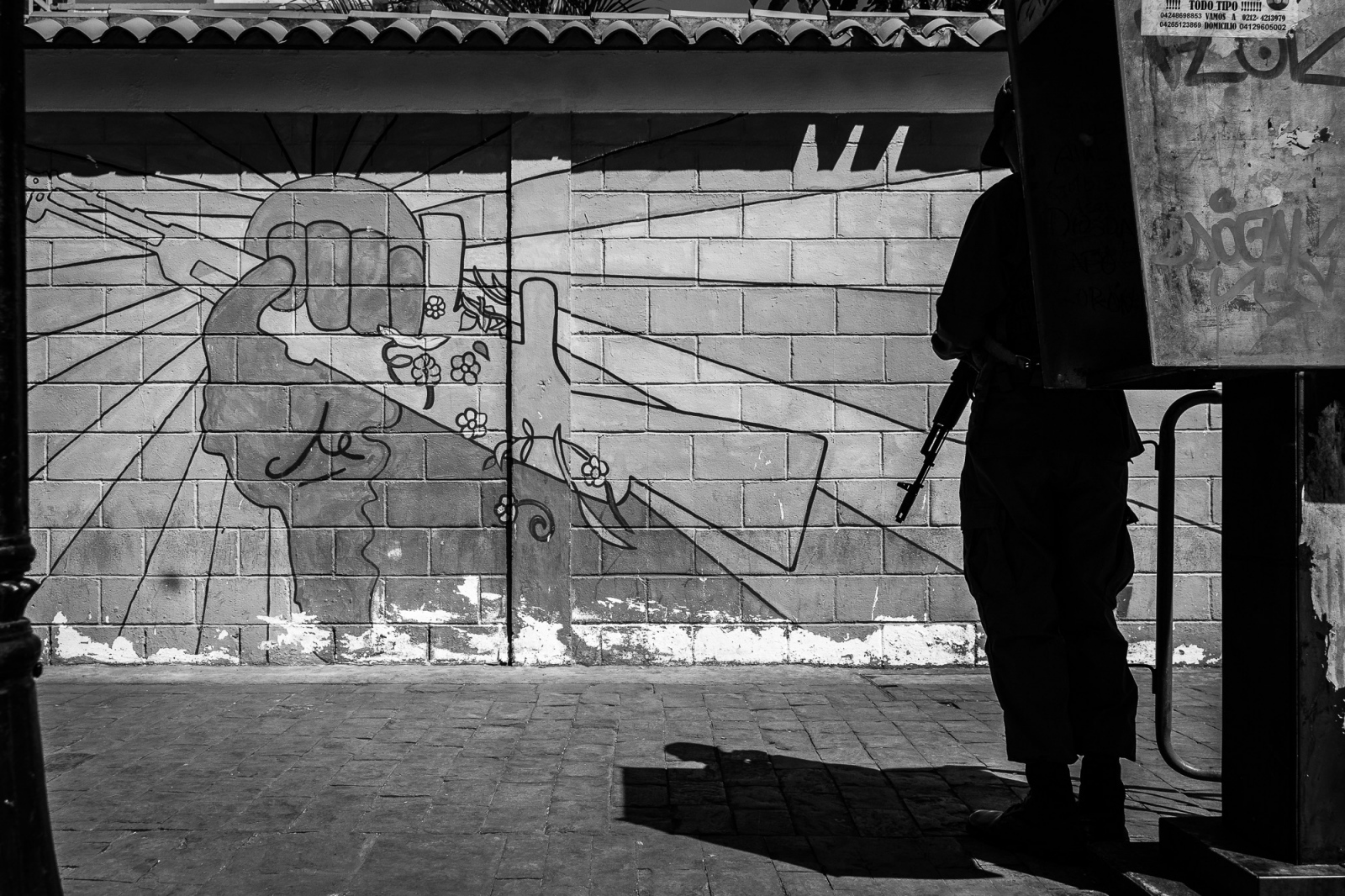 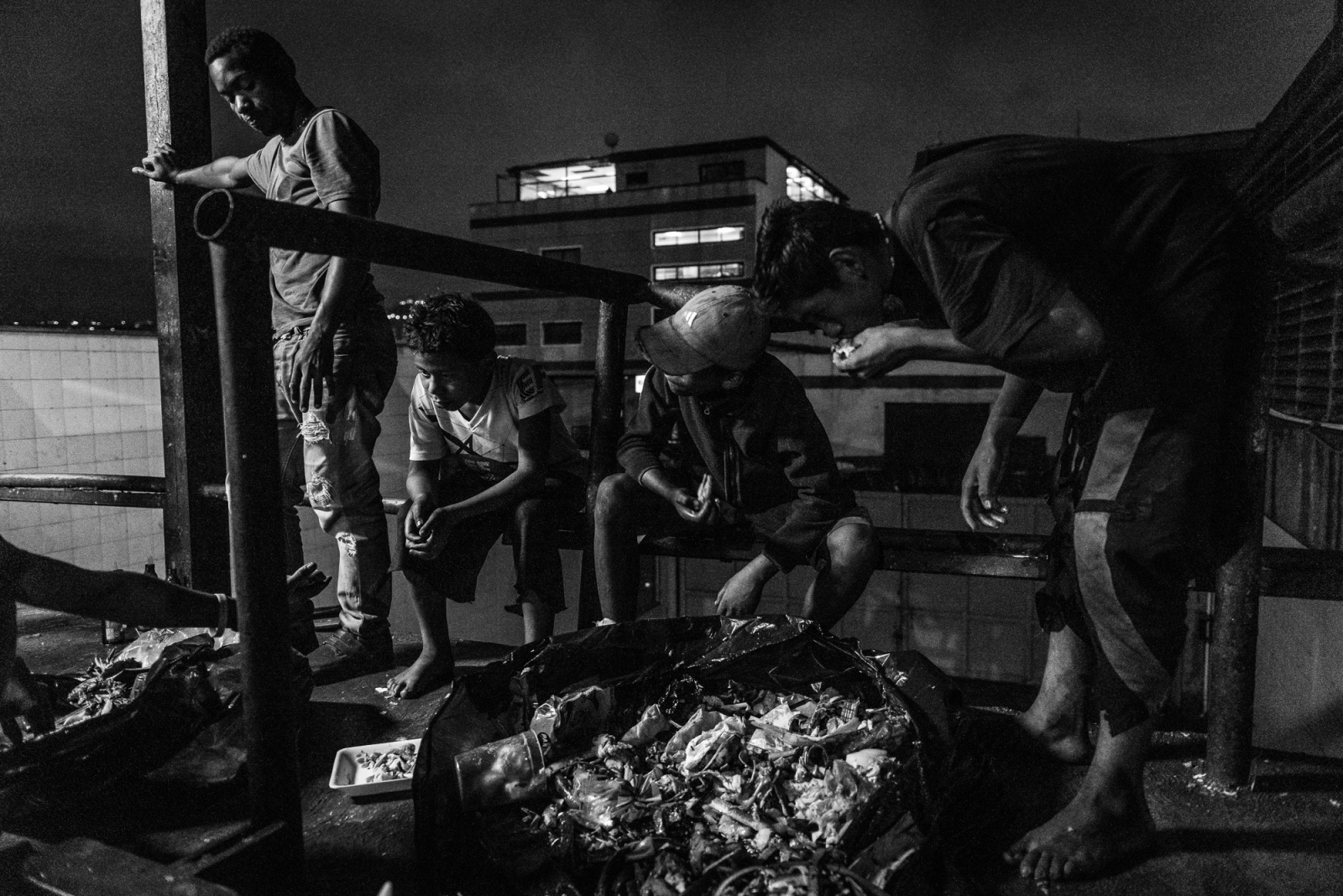 18 of 29 © 2021 Ignacio Marin
Children look for food in a garbage dump at the back alley of a large shopping center. According to Cáritas, 53% of families have had to look for food at unconventional places, often meaning garbage. 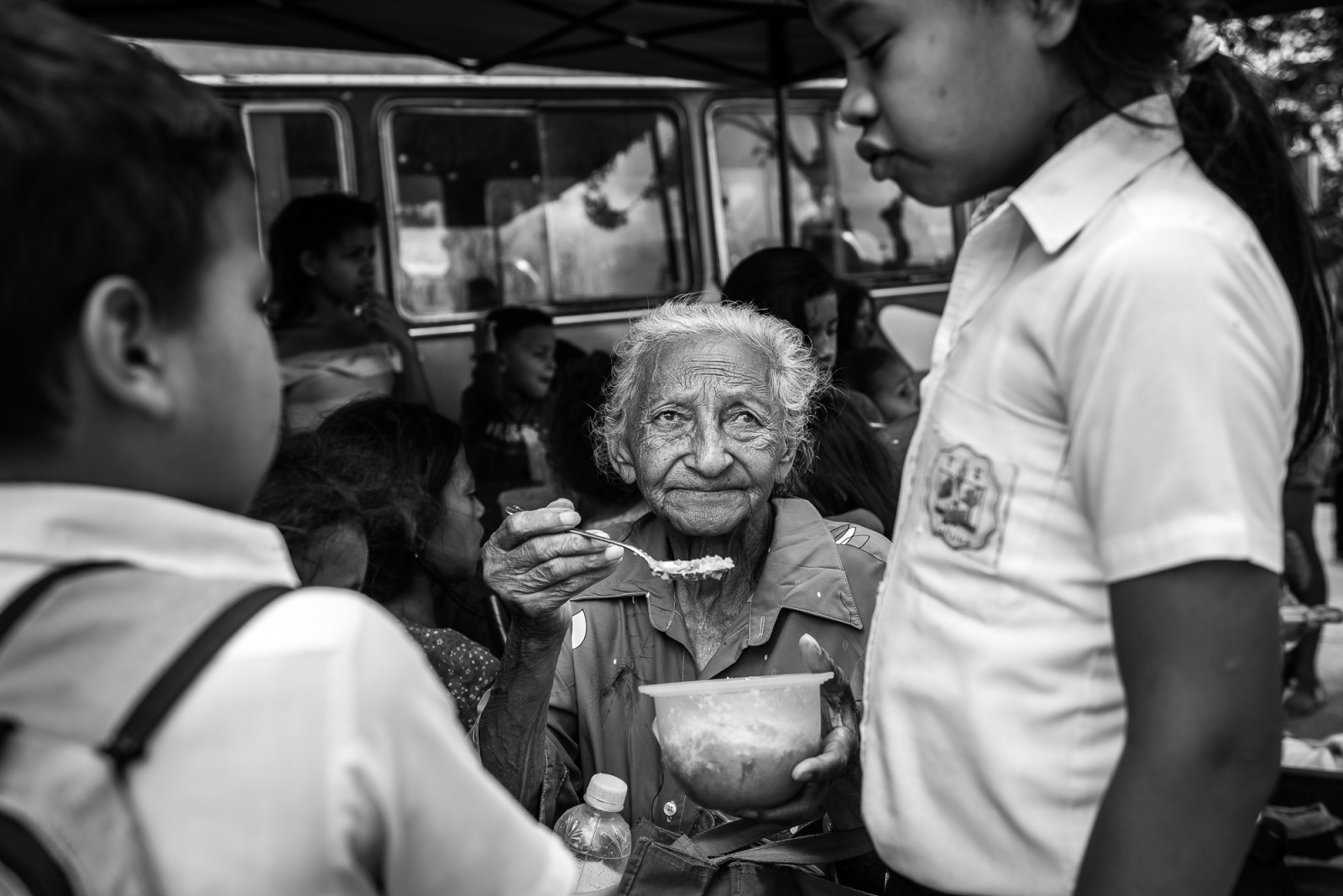 19 of 29 © 2021 Ignacio Marin
A grandmother feeds her grandchild at a charity kitchen run by volunteers and an NGO. Often someone in the family ends up giving up their meal so that the other members of the family can eat a bit more. 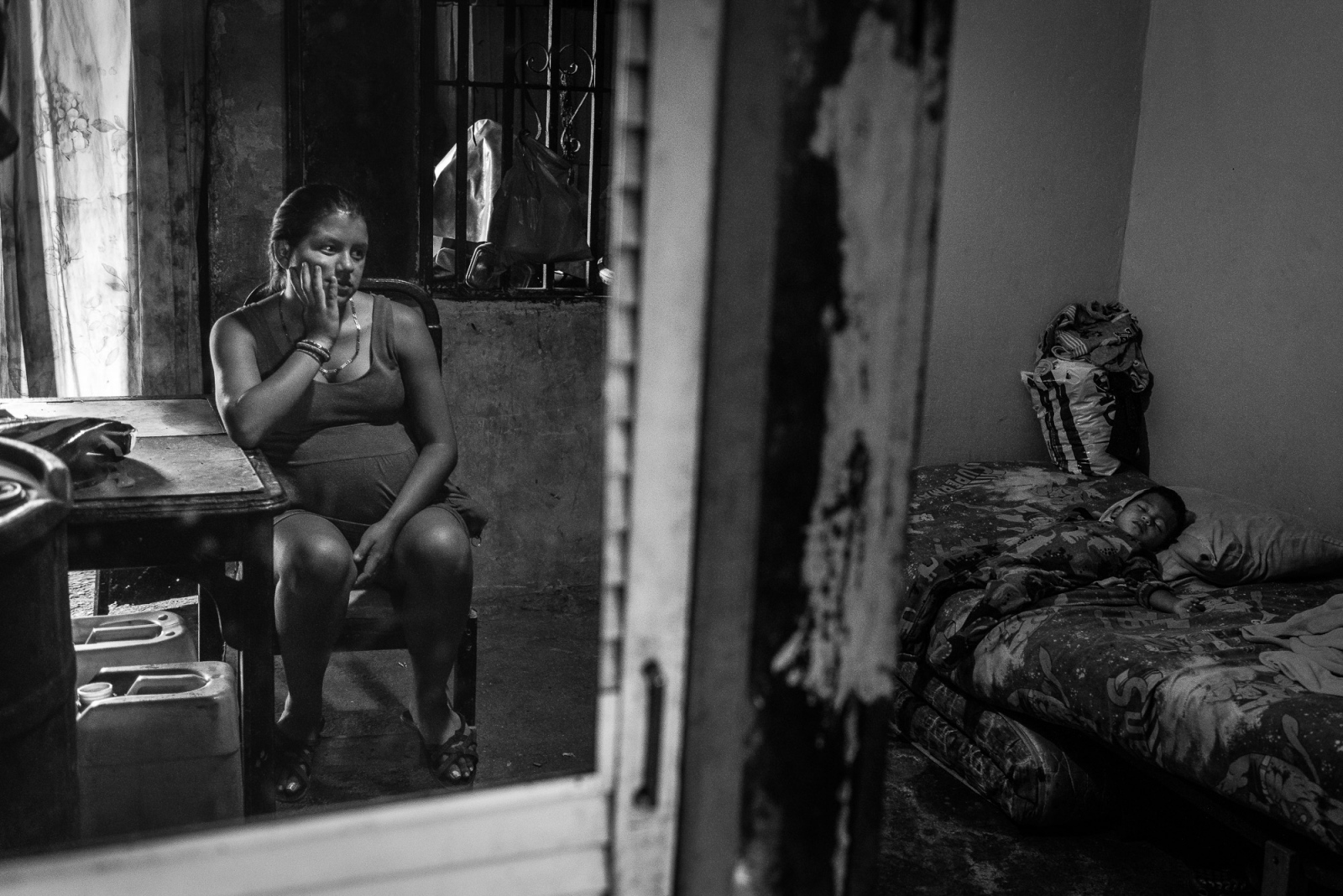 20 of 29 © 2021 Ignacio Marin
Roxana Gutierrez -19 years old- looks after her son. While she and her husband, Carlos -20 years old-, had steady jobs, it became harder for them to find food, which pushed Carlos to begin to steal motorcycles. He is now serving sentence and she is pregnant of their second baby. 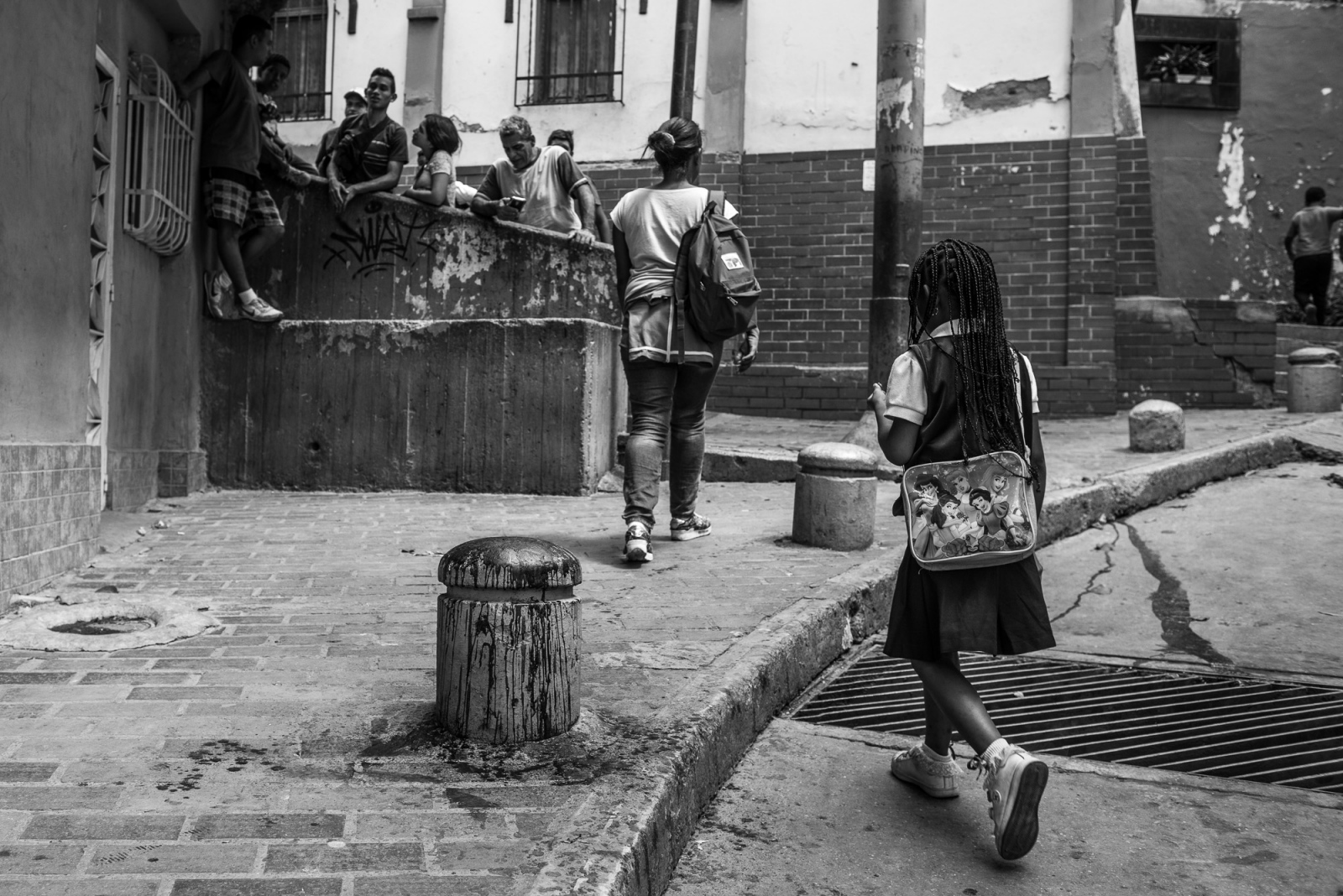 21 of 29 © 2021 Ignacio Marin
A girls passes in front of a crime scene. A few minutes earlier, a man had stabbed three people using a kitchen knife. 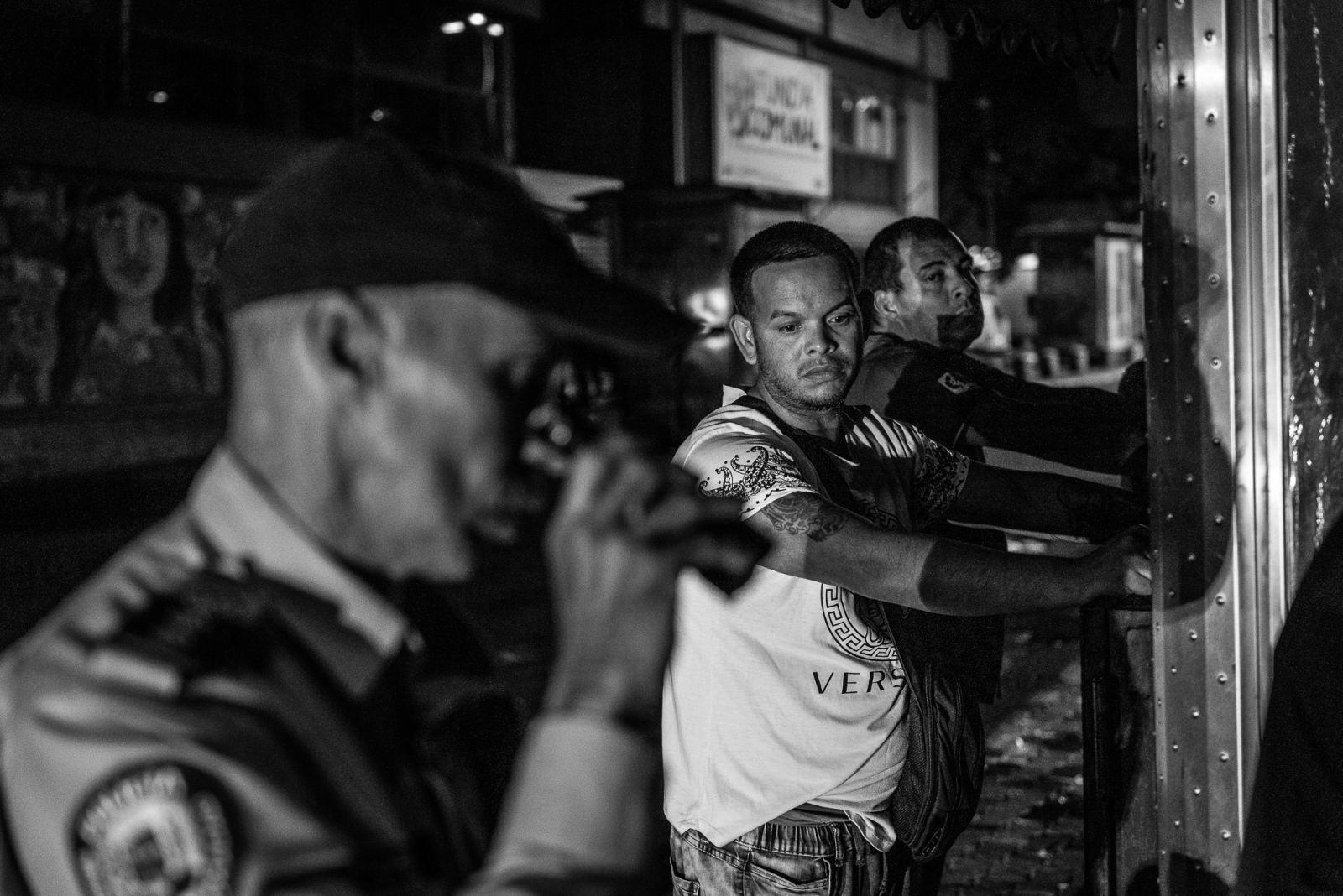 22 of 29 © 2021 Ignacio Marin
A police officer registers suspects during a raid. 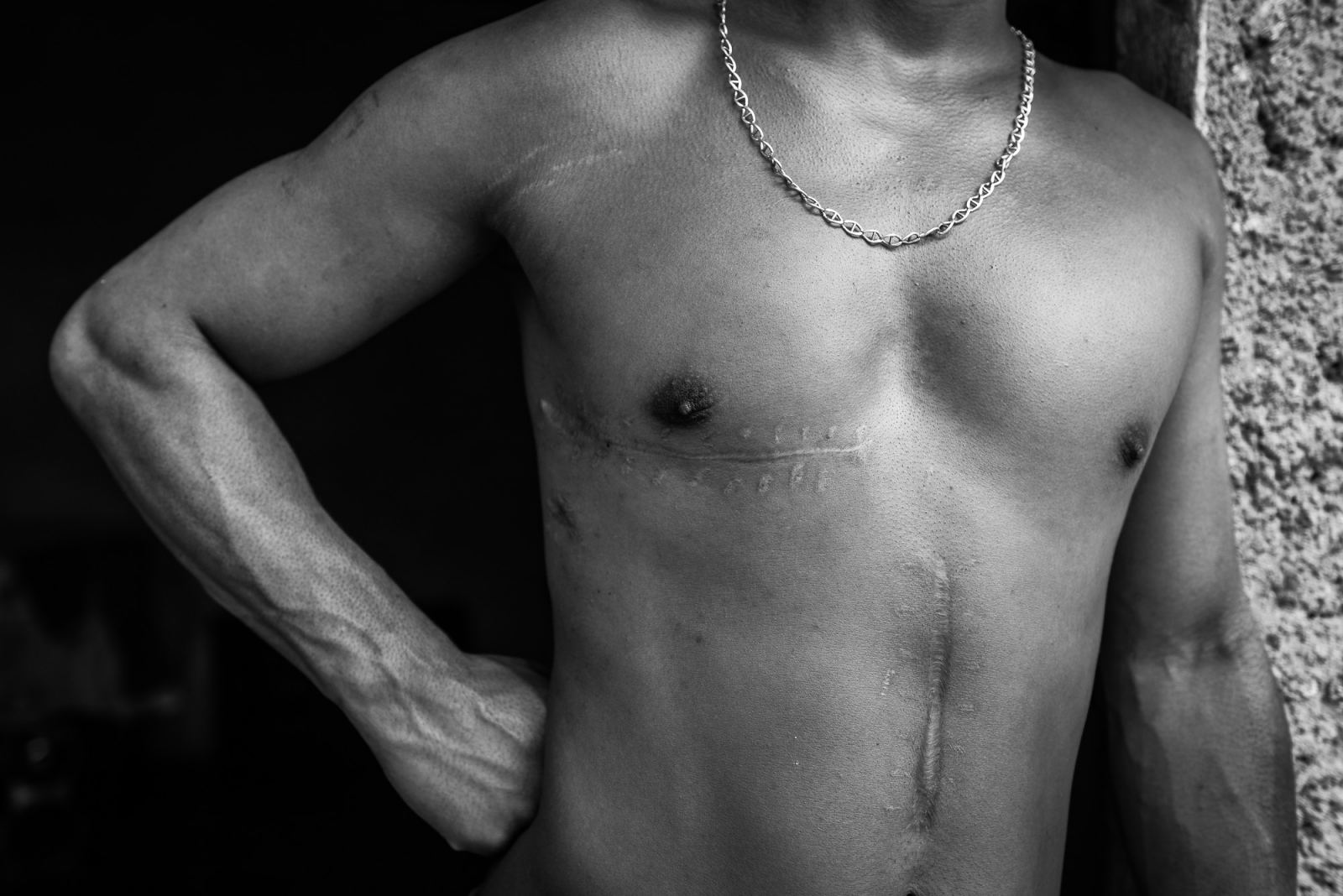 23 of 29 © 2021 Ignacio Marin
A motor-taxi driver shows the scars of the wounds he suffered when he was assaulted and shot two times by motorcycle thieves. 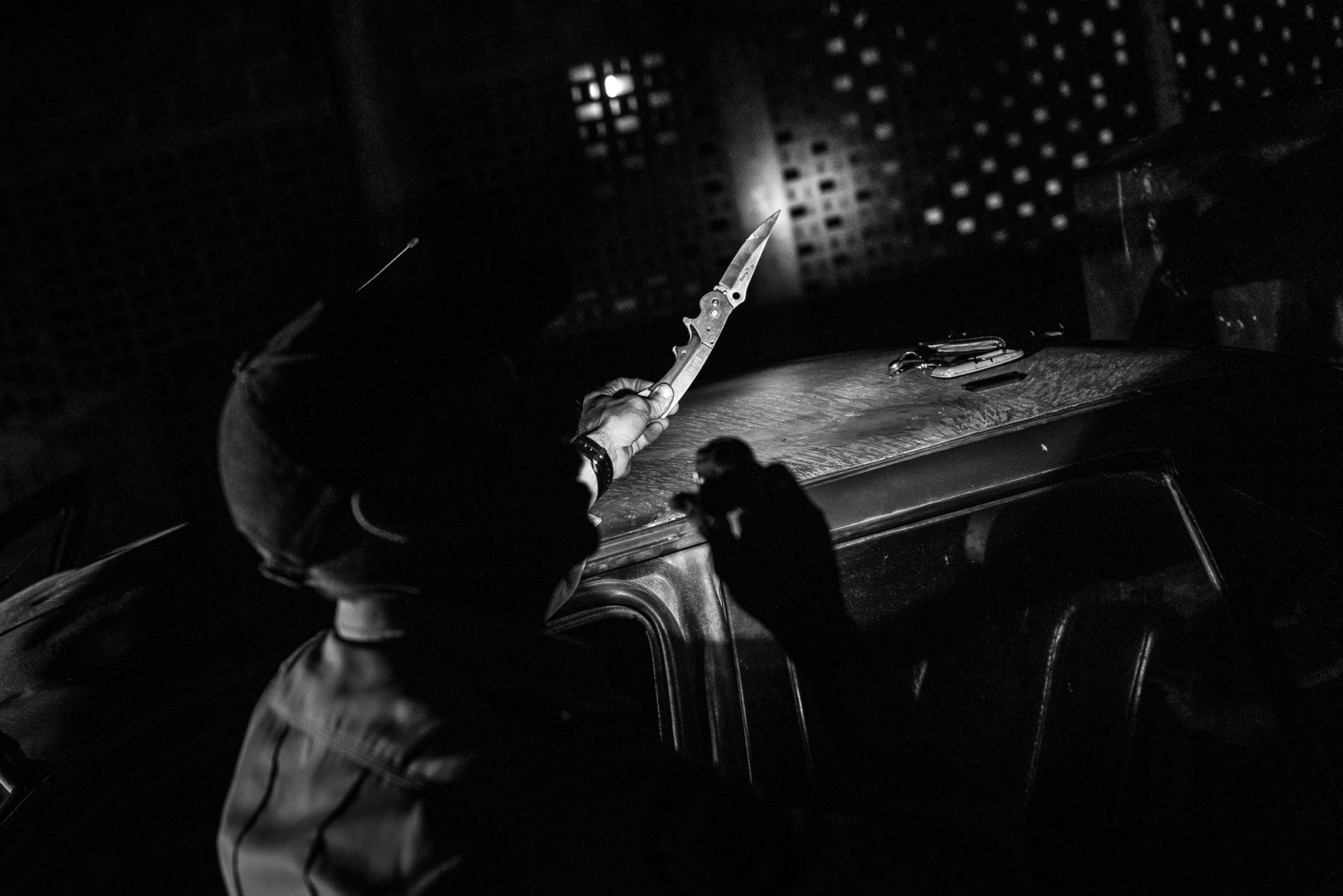 24 of 29 © 2021 Ignacio Marin
A policeman confiscates a knife during a night patrol. 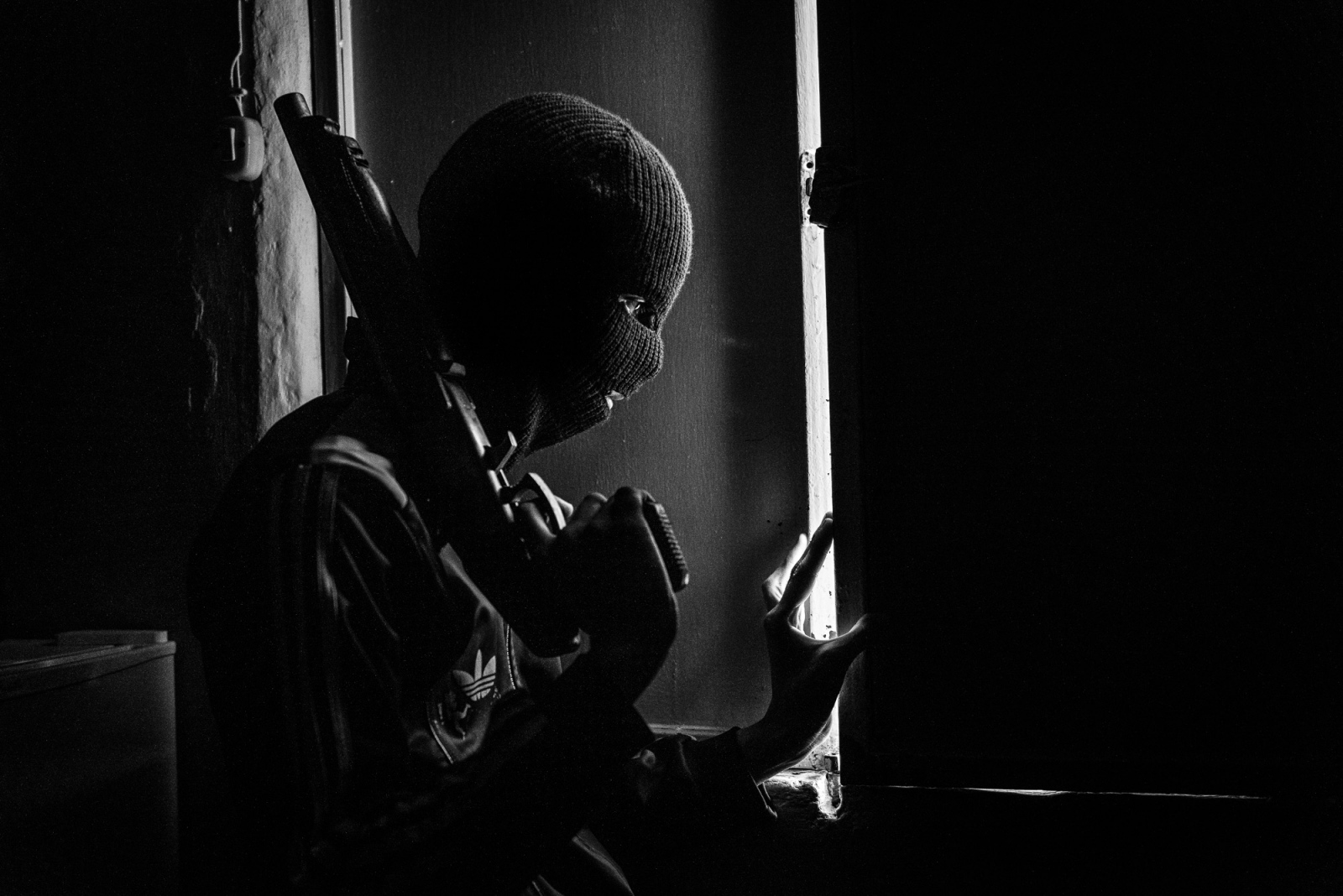 25 of 29 © 2021 Ignacio Marin
A member of a kidnappers gang watches through the window to avoid a potential police raid. He is only 15 years old and, as other teenagers, he joined the gang in order to support his family. 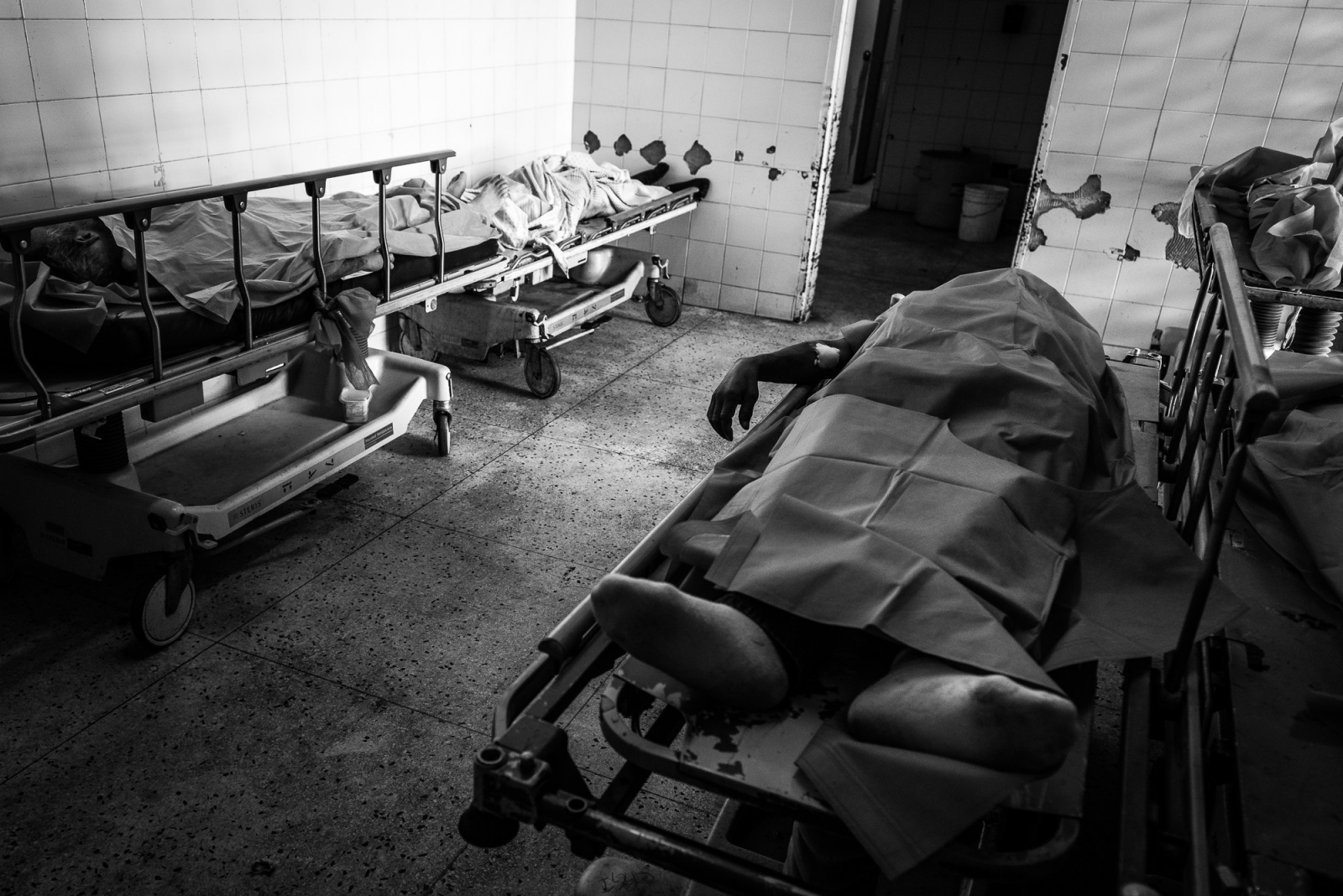 26 of 29 © 2021 Ignacio Marin
Corpses at the morgue of the Perez Carreño’s hospital. Official crime figures are not released by the government, but according to the non-govermental organization OVV, Venezuela had over 26,616 homicides in 2017, a rate of 89 per 100,000 inhabitants, while only in Caracas 1.331 people were killed within a year. 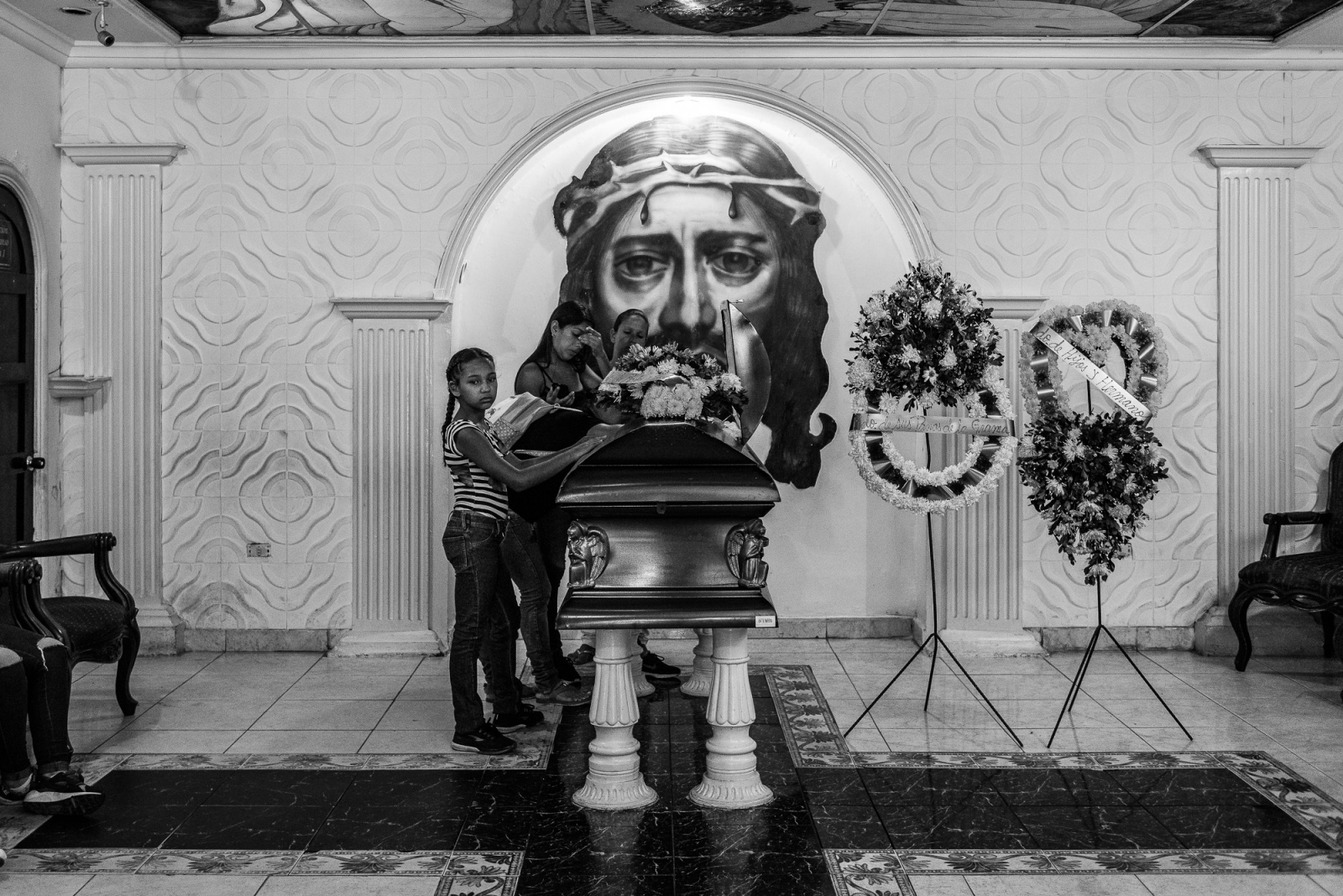 27 of 29 © 2021 Ignacio Marin
A family mourns the death of a family member, who was killed violently. Over 95% of cases are never solved. 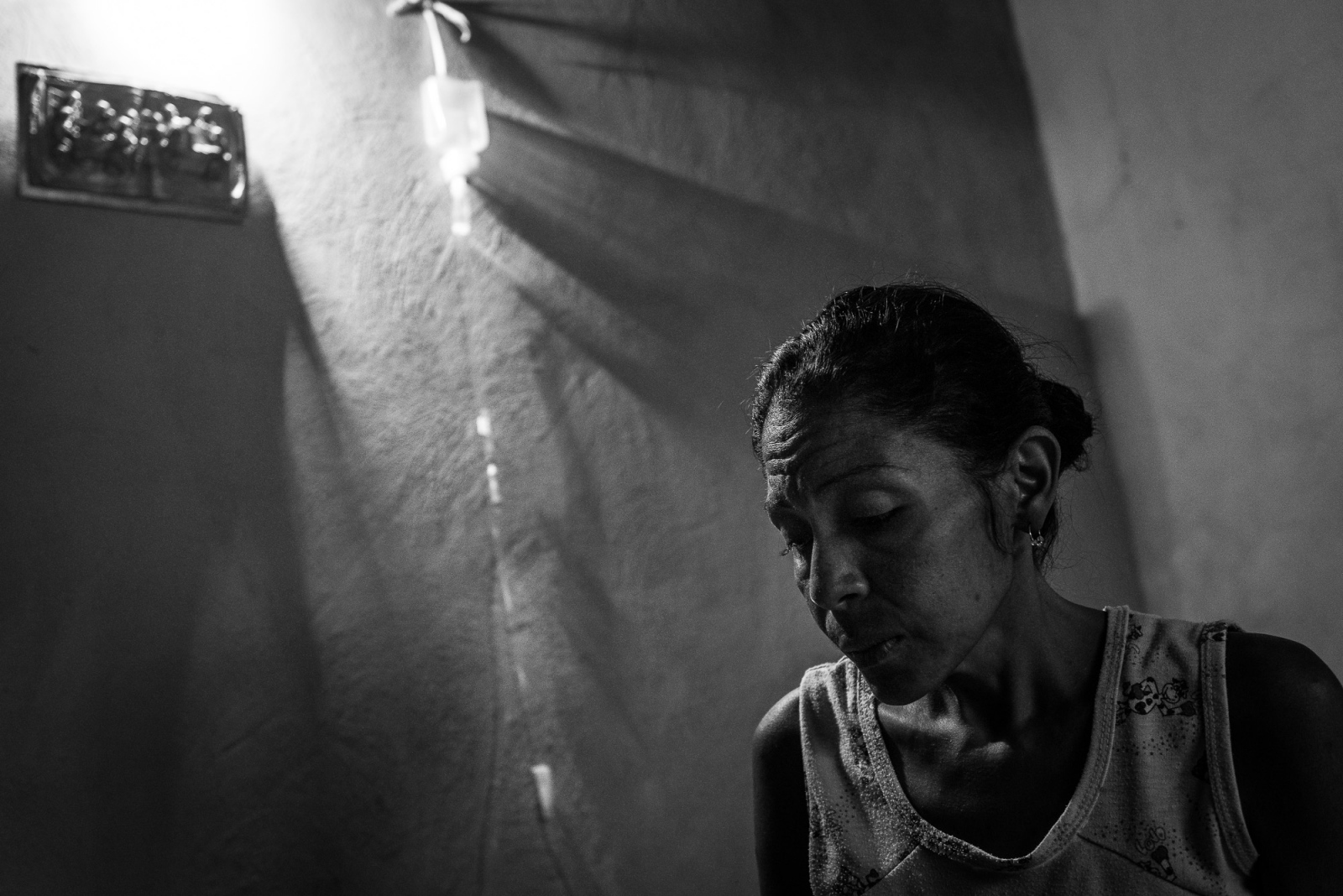 28 of 29 © 2021 Ignacio Marin
Gregoria Aular in her house in Barrio Nuevo, a slum in west Caracas. Her medical condition as a patient of leukemia and the difficulties to find medicines pushed her two sons (15 and 17 years old) to turn to crime. They were executed by the police at their own house one morning. Gregoria Aular has recently died. 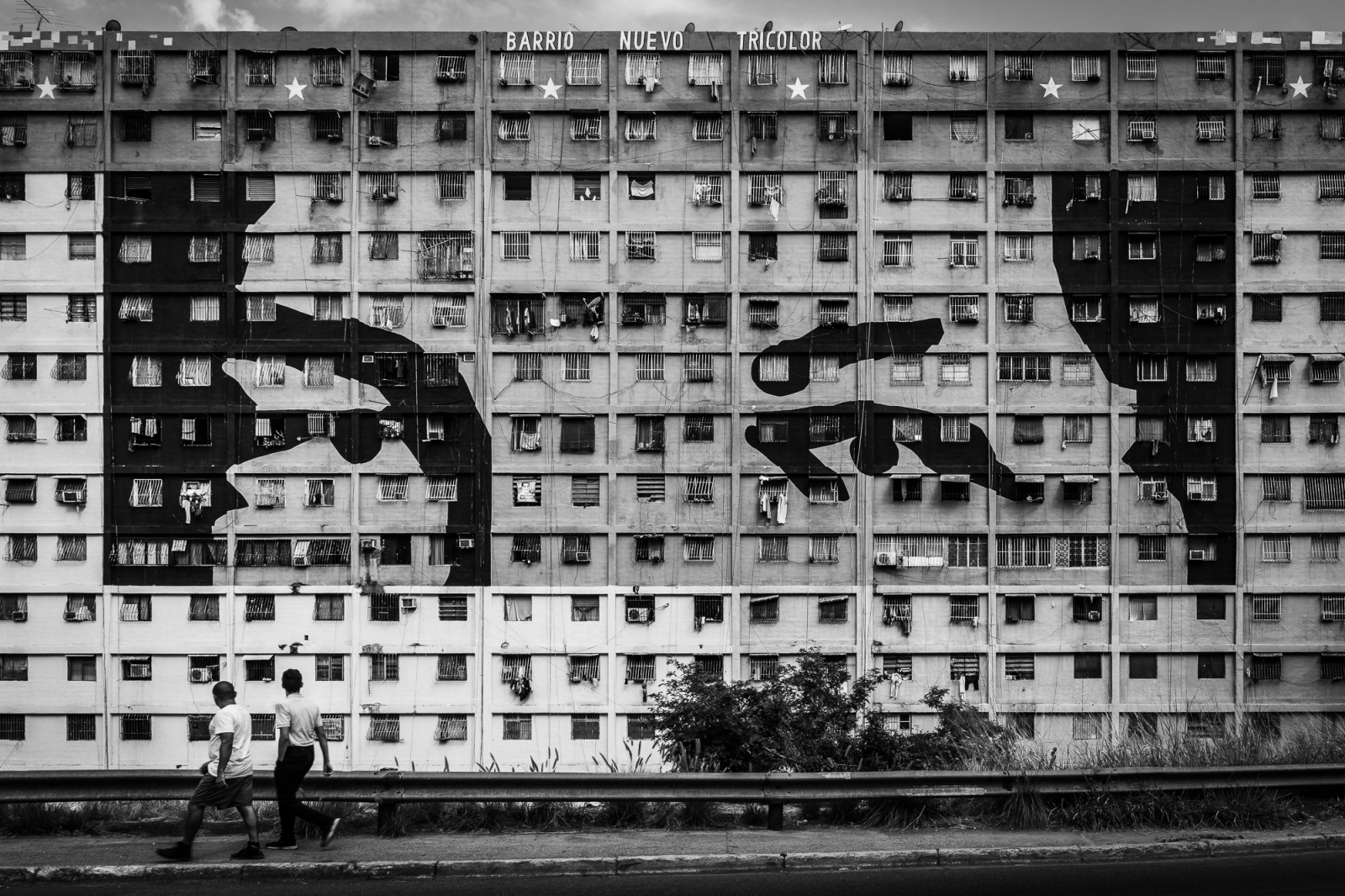 29 of 29 © 2021 Ignacio Marin
A mural of the Hugo Chavez’s eyes dominates the view of the 23 de Enero neighbourhood, a slum in Caracas. The painting of Hugo Chavez’s eyes became iconic after his death and mas meant to be a symbol of his presence and legacy. While the 23 de Enero used to be one of the strongholds of the Chavismo, many have grown tired of years of economic mismanaged and persisting crisis.
Public Story
Hunger Crimes
Credits: ignacio marin
Date of Work: 06/01/18 -
Updated: 04/10/21
Location: Caracas, venezuela
Archived as:  Children, Corruption, Crime, Documentary, Editorial, Fear, Gangs, Hunger, Latin America, Militias, NGO, Photography, Photojournalism, Poverty, Prison, Soldiers, Venezuela, Violence
HUNGER CRIMES
In Venezuela, the collapse of the economy and the subsequent food shortages has lead to a new type of crime: hunger crime.

Out-of-control hyperinflation, measuring 1,000,000% in 2018, has meant prices doubling every week. Even employed people with steady jobs can’t afford to buy the most basic goods. The last Survey of Living Conditions (ENCOVI) reports that 89.4% of respondents said their household income was not enough to buy food and 61% reported sleeping hungry at night. A report this year from Cáritas found that the average family required 98 times the minimum wage to afford adequate food to subsist.

The epidemic of empty stomachs has unleashed a new wave of hunger-motivated crimes. The rise of these crimes has been tracked by NGOs such as the Venezuelan Observatory of Violence. In a country where virtually all crimes go unpunished and money is worth less than the paper it is printed on crime becomes a viable solution to hunger.

Fathers go out at night to steal motorcycles. Gangsters recruit youngsters by paying them in food. Crime and insecurity is on the rise. Robberies and kidnappings have become a major industry. The direct consequences are suffered on the streets: 1.368 people were killed in Caracas in 2018, according to Monitor de Victimas.
. . .

By Ignacio Marin — PROFESSION: GIRL In Ethiopia, one of the poorest countries in Africa, to be a girl is a full time job...
Apr 10, 2021

By Ignacio Marin / Dhaka — A DROWNING LAND In Kalabogi, a small village at the Sundarbarns, in the coastal region of the Bay of..
Apr 10, 2021

By Ignacio Marin / Caracas, venezuela — THE LAW OF GOLD AND LEAD  Venezuela used to be the wealthiest nation in South America. Today, is in..
Apr 10, 2021