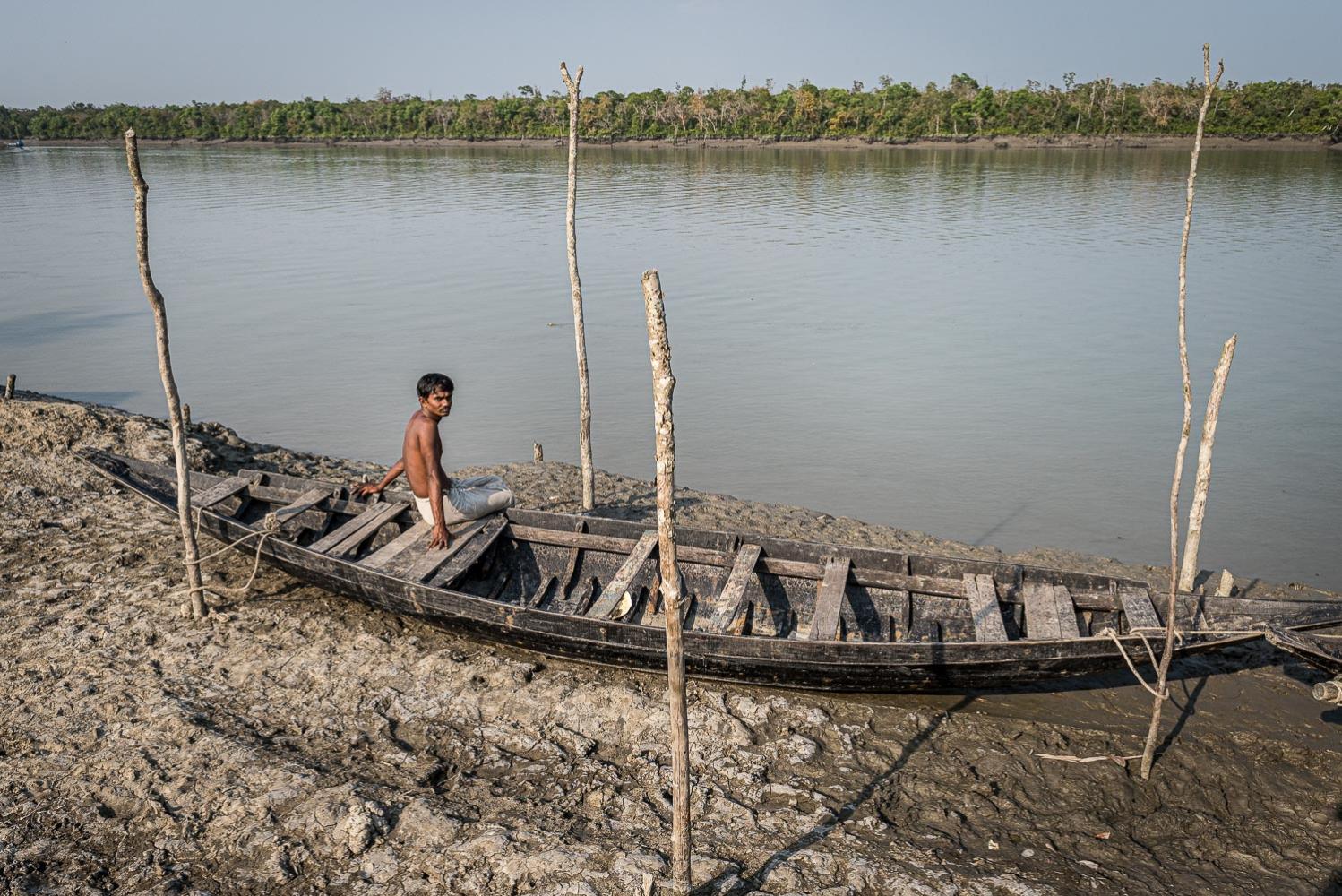 1 of 26 © 2021 Ignacio Marin
A man sits on a fishing boat at the embarkment. “Climate change has become a huge business in Bangladesh, with lots of money flying around NGOs that use fancy words such as mitigation and resiliency. Most of their projects are planned based on that, if there is no land to farm anymore, let's support them with fishing. That may work for the next few years, but they are not addressing the long term consequences, the catastrophe that is coming”, says Maha Mirza, a local environmental activist. 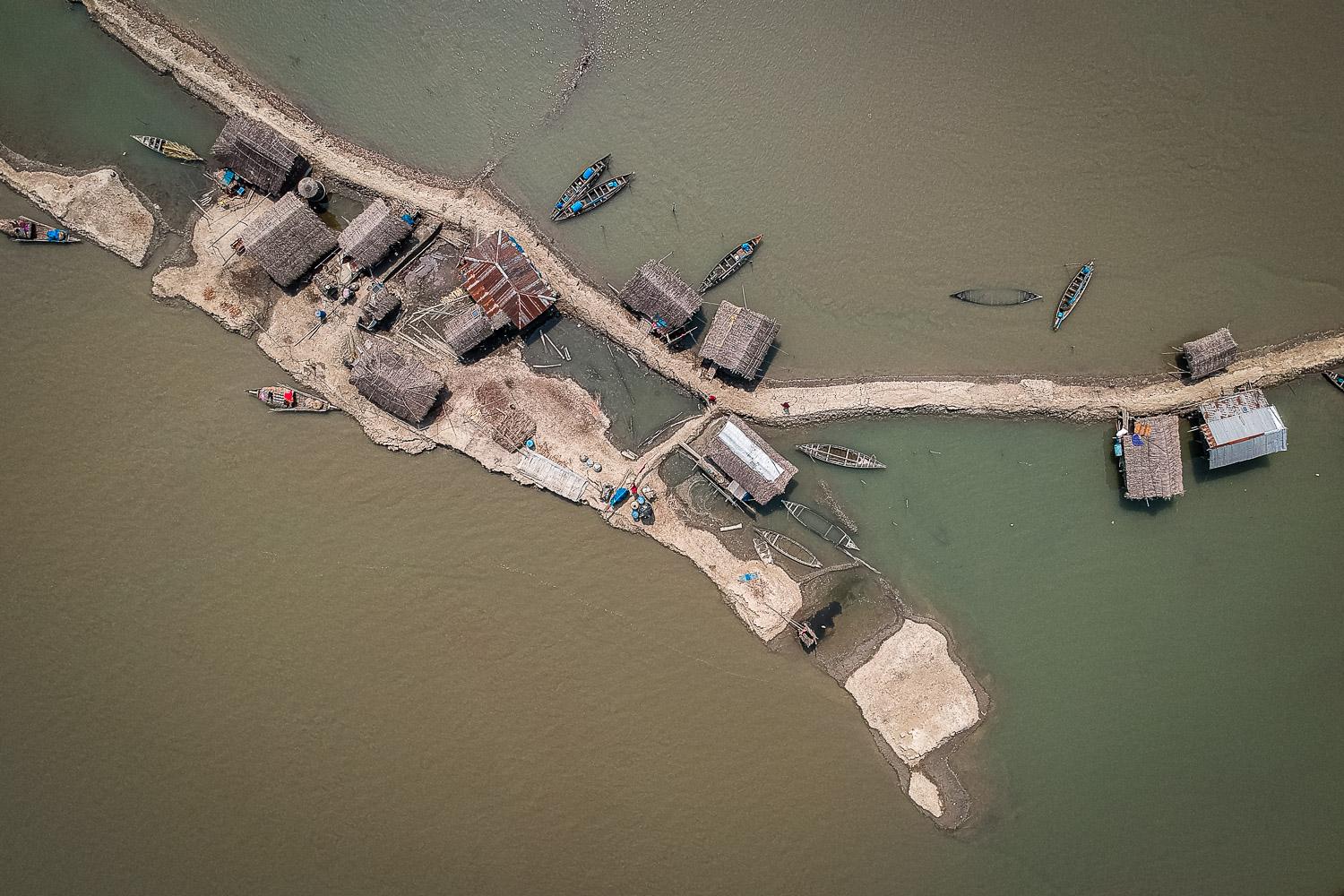 2 of 26 © 2021 Ignacio Marin
Aerial view of Kalabogi island, located at the Sundarbarns delta area of Bangladesh. In recent years, much of Kalabogi has been swallowed by the erosion of Dhansidhya’s river ever-rising tide, forcing hundreds of families to relocate into a different region. Across Bangladesh, riverbank erosion alone has triggered the displacement of between 50,000 and 200,000 people every year. 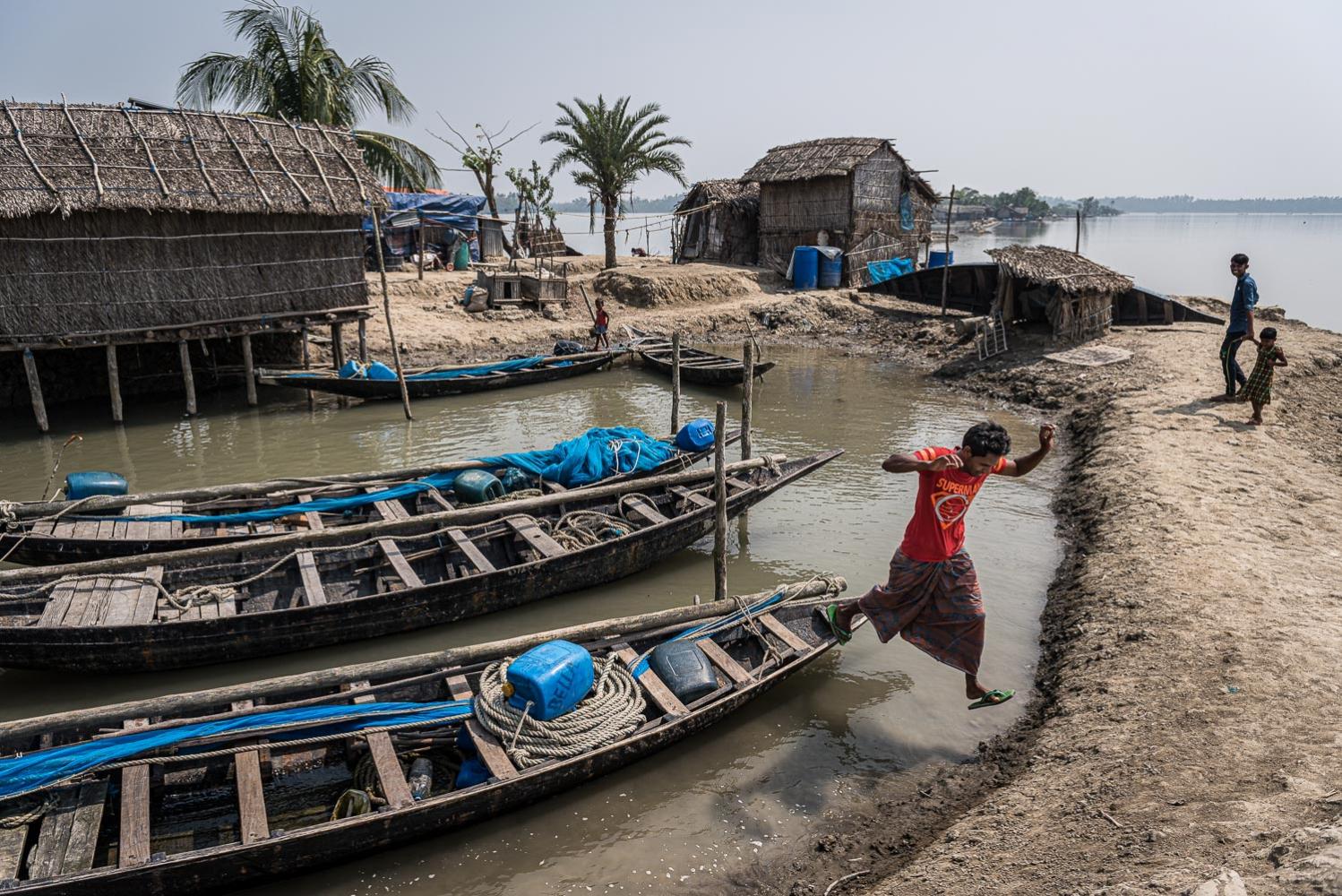 3 of 26 © 2021 Ignacio Marin
A man jumps from his boat to one of the few stripes of land left in Kalabogi. According to UN’s IPCC reports, the Sundarbarns area, home of about 13 million people, could be underwater by 2030 due to the raise of sea level, stronger rivers and increased cyclone intensity. 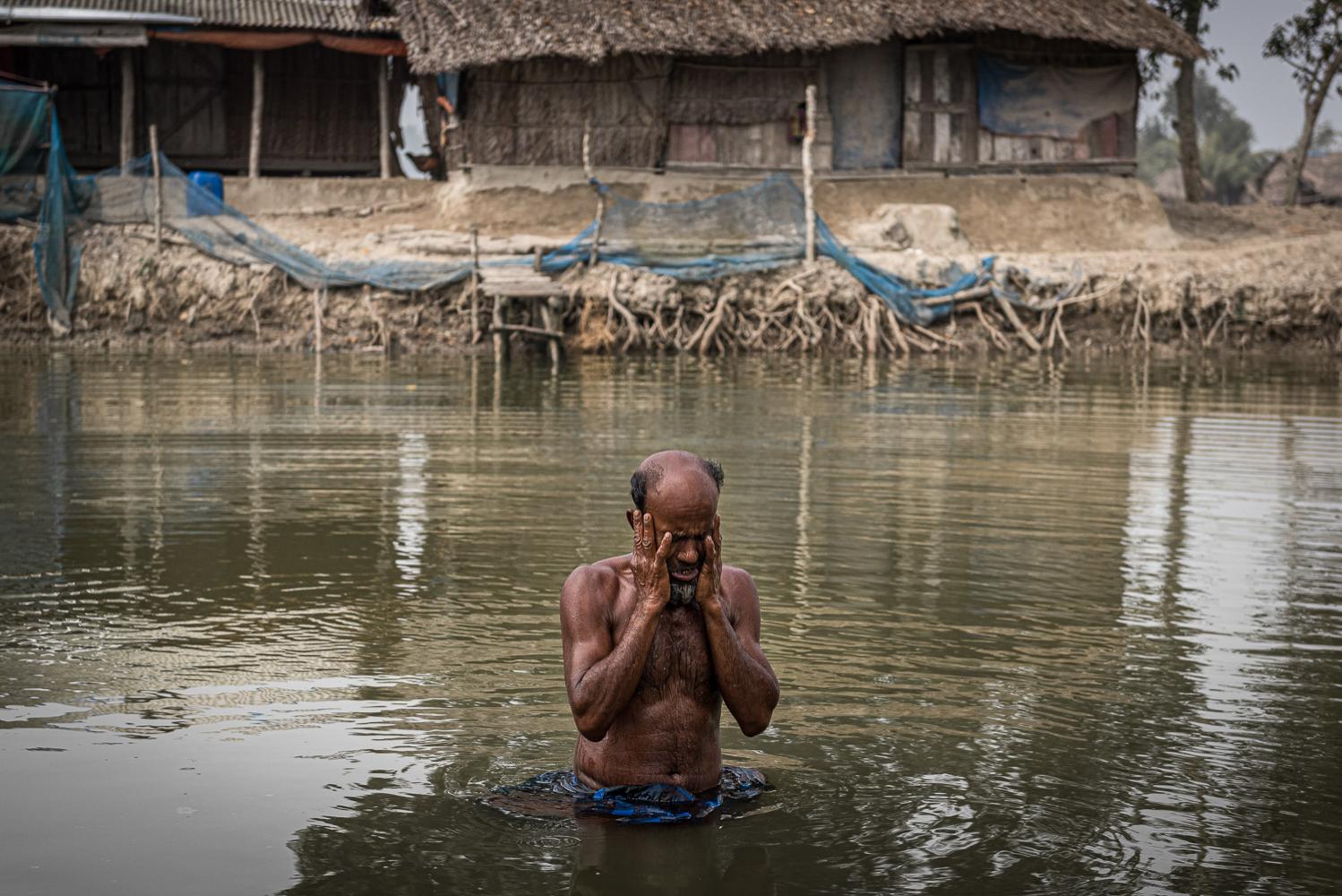 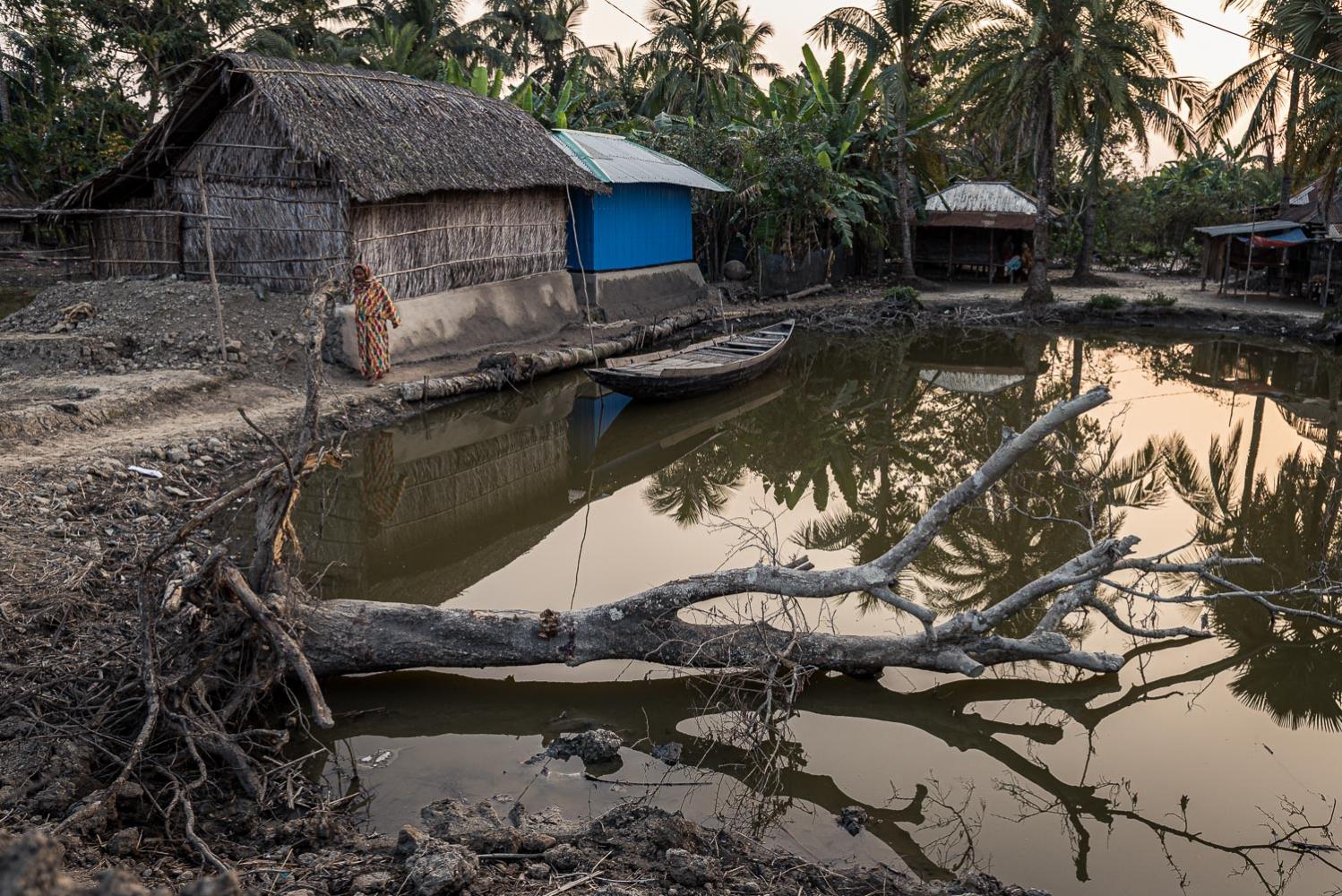 5 of 26 © 2021 Ignacio Marin
A woman walks next to a flooded rice field. In most cases, the sociocultural norms of a very traditional country as Bangladesh prevent women from migrating. Women then face another vulnerability since the male’s income is missing and risk being trapped or left behind in Bangladesh with no possibility of migrating themselves. 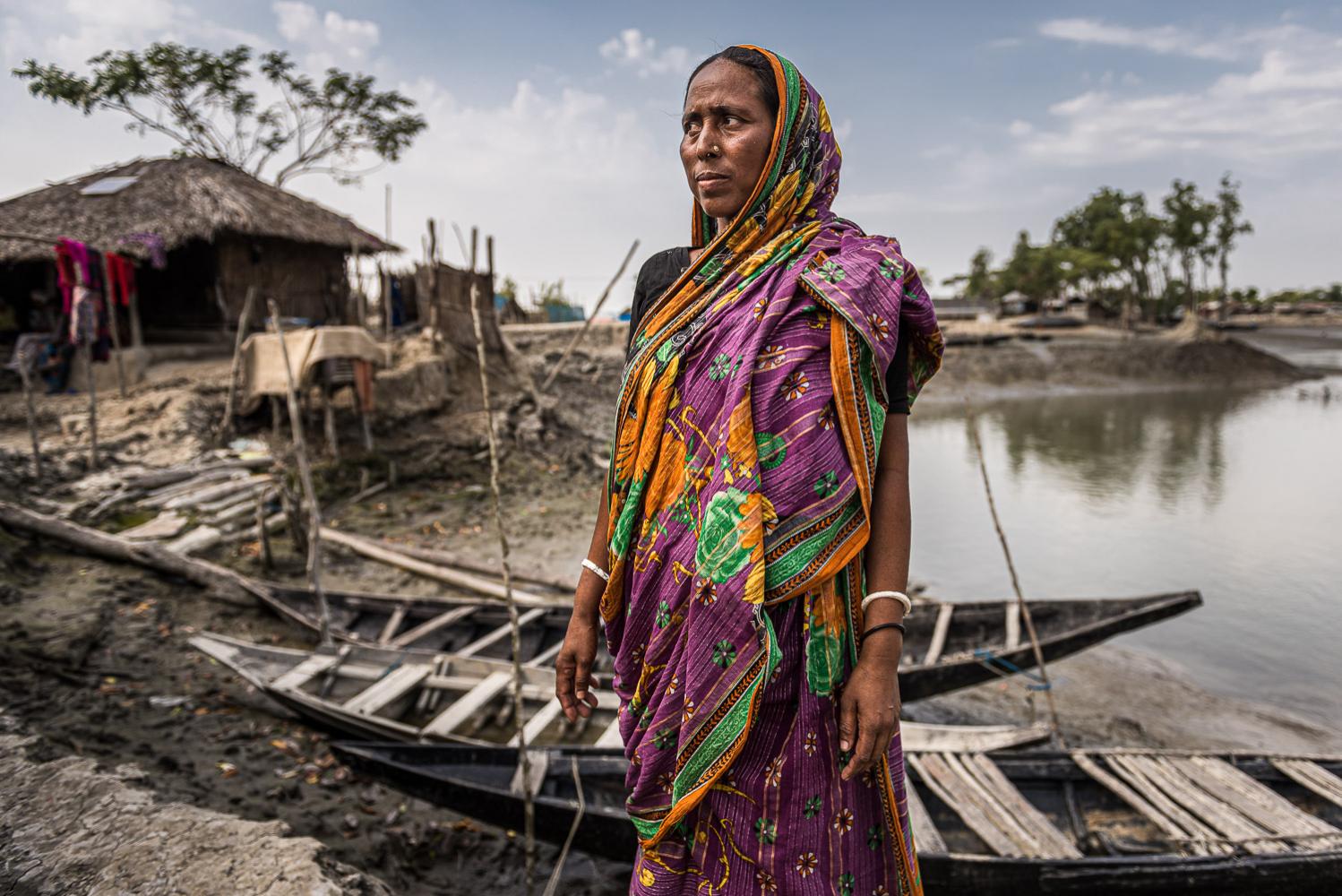 6 of 26 © 2021 Ignacio Marin
Shaheen, 47, stands a few meters of where her house used to be before the river swallowed it very recently. “The flooding of the river happened during the night, when everyone was asleep. We only had time to take our little daughter and run out of the house”, sais Shaheen. 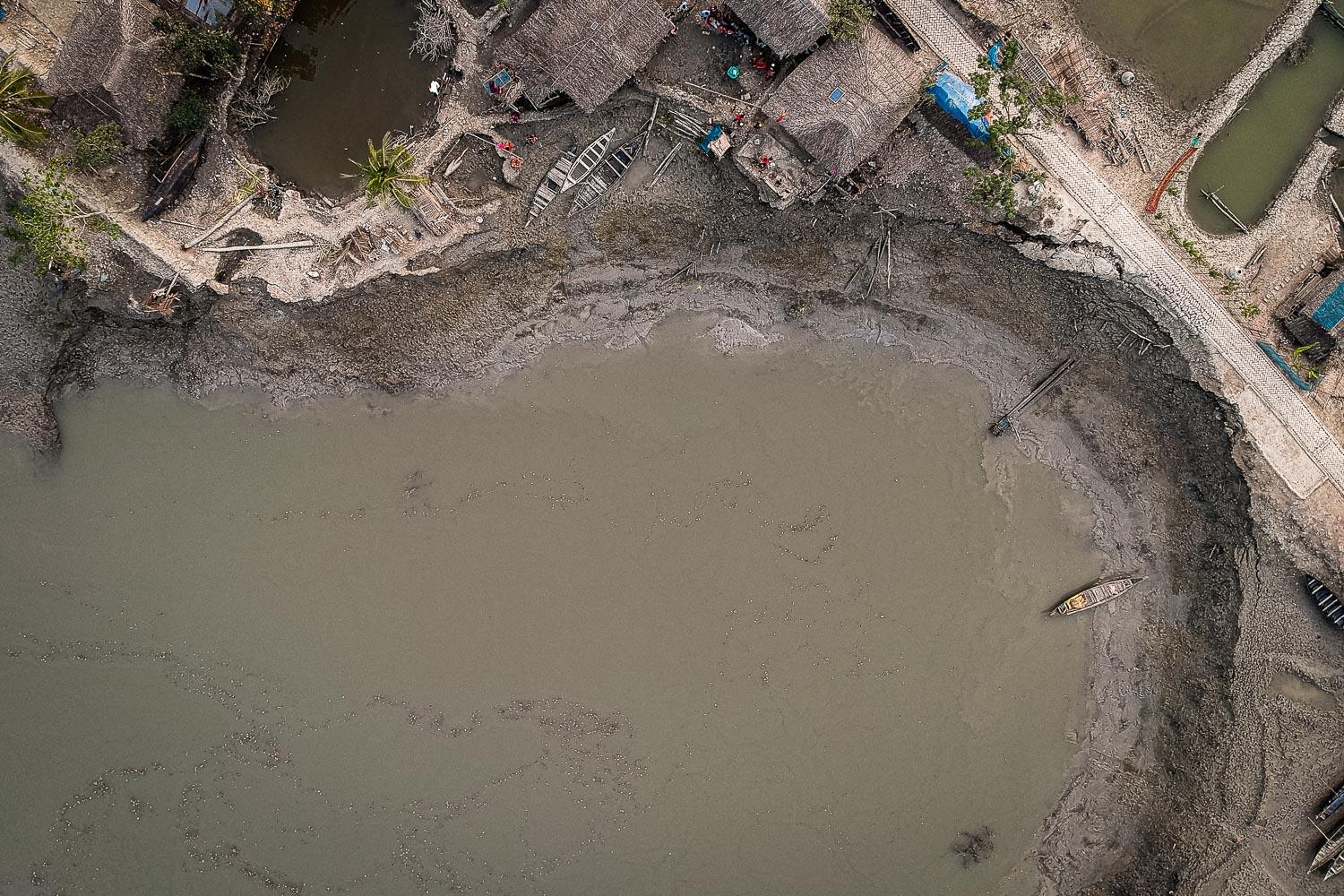 7 of 26 © 2021 Ignacio Marin
Aerial view of the location where Shaheen’s house, together with those of another 9 families, used to be before the river erosion took them away. 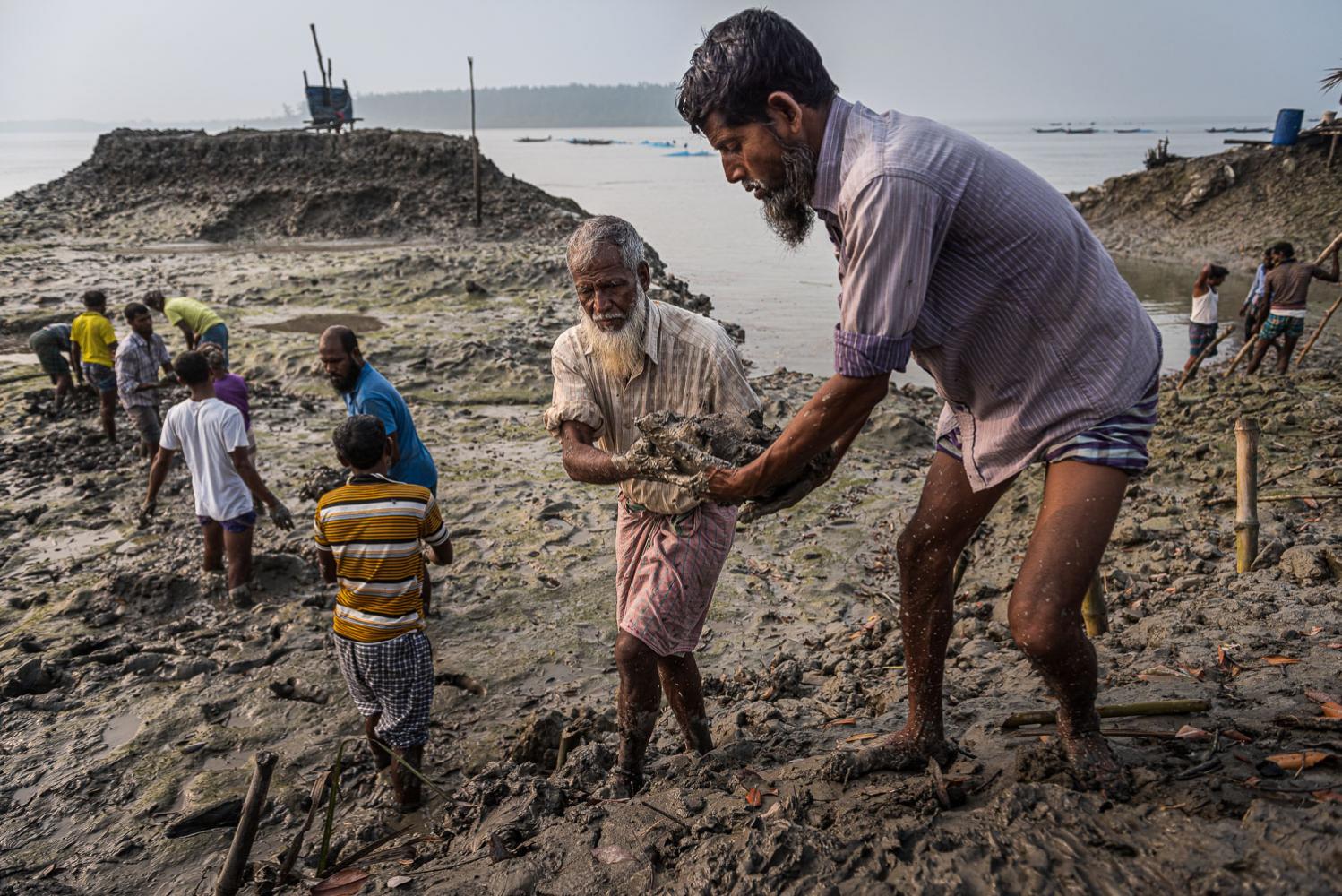 8 of 26 © 2021 Ignacio Marin
A group of villagers work to build an embankment a few meters deeper inland than the previous one. The former one collapsed during the last monsoon season, letting salty water flooded the rice paddies and ruined the harvest, the main source of food and income for many families. This year there will be less farmable land available for the same number of families, and that is if the new embankment resists. 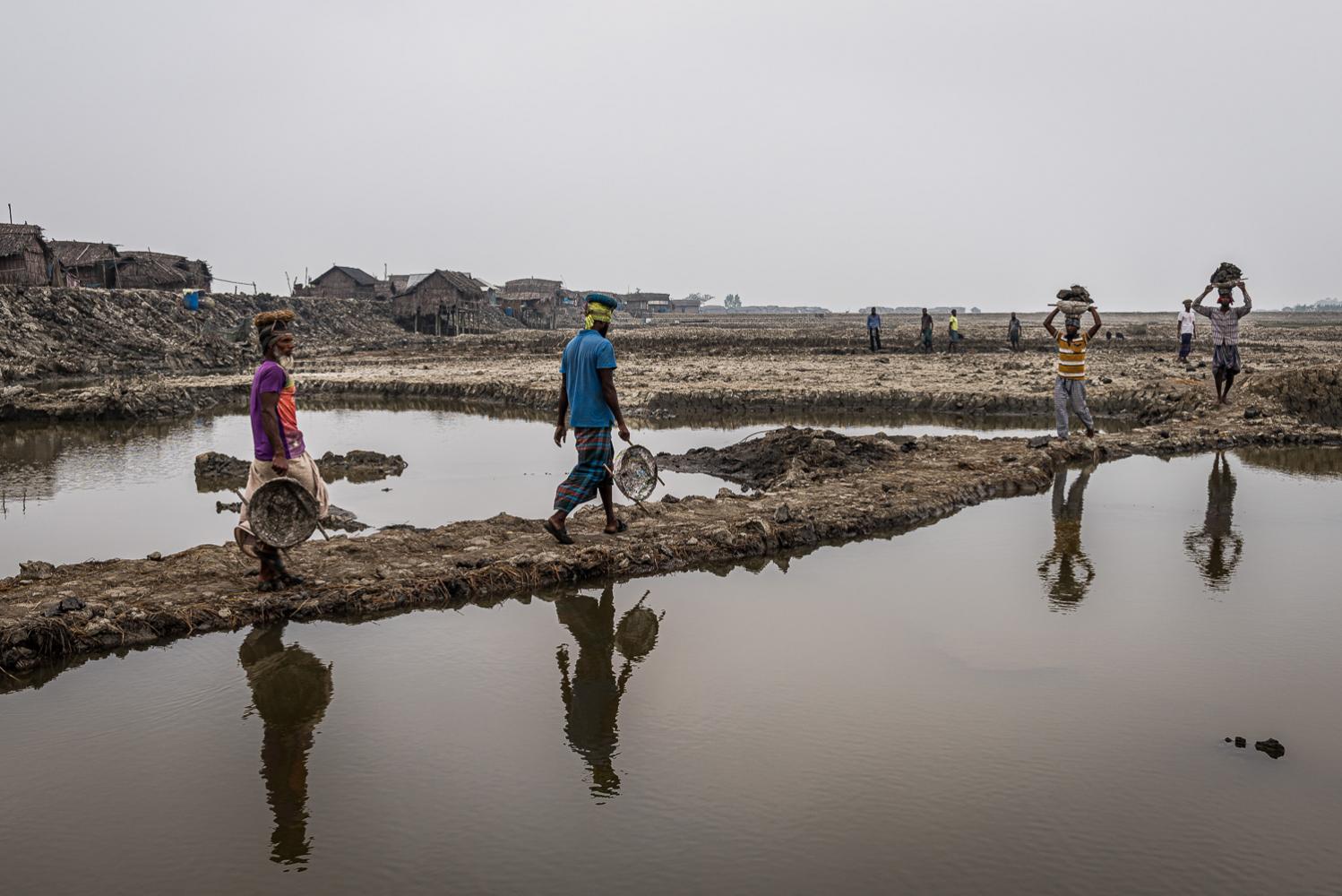 9 of 26 © 2021 Ignacio Marin
Villagers work to build an embankment a few meters deeper inland than the previous one. The former one collapsed during the last monsoon season, letting salty water flooded the rice paddies and ruined the harvest, the main source of food and income for many families. This year there will be less farmable land available for the same number of families, and that is if the new embankment resists. 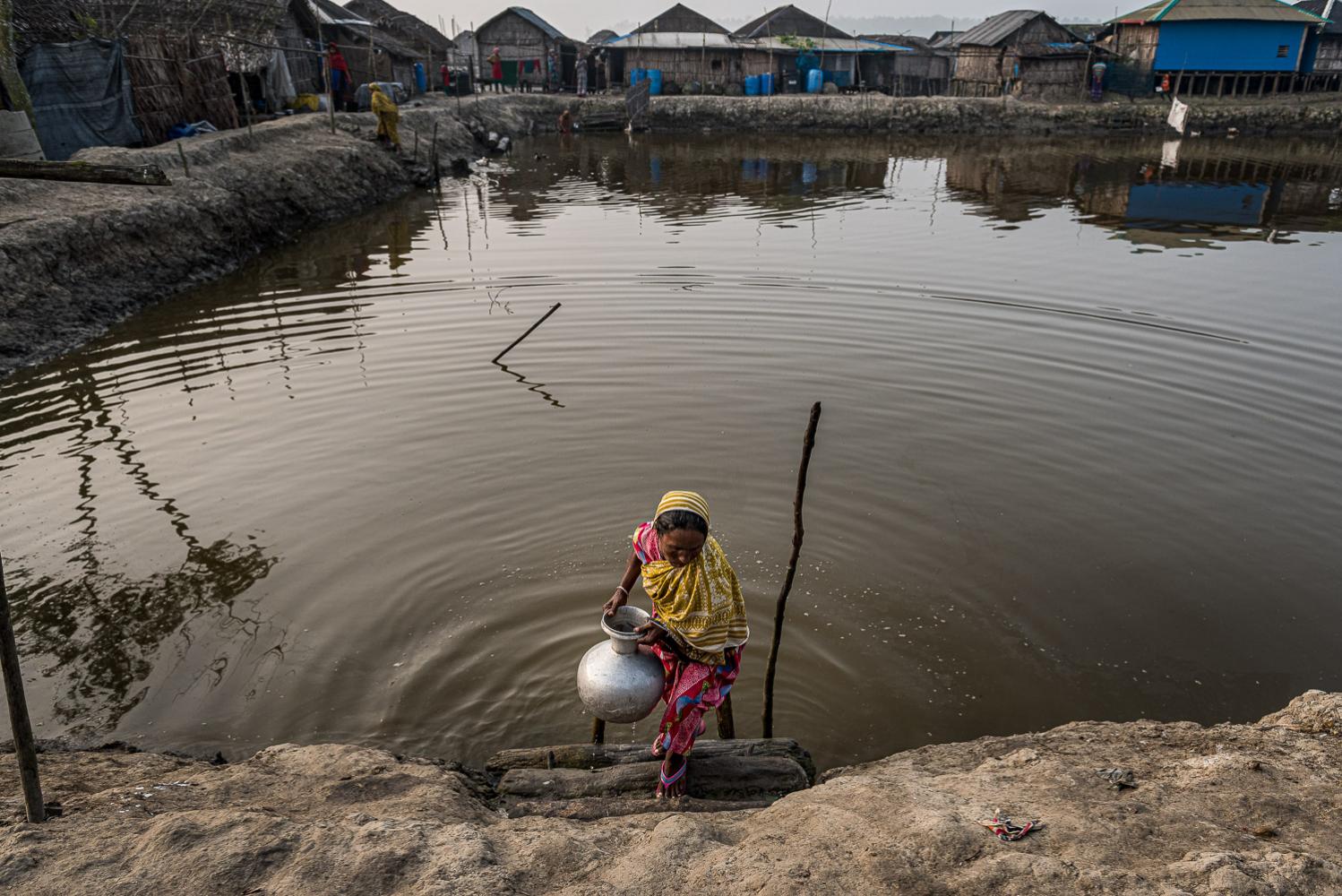 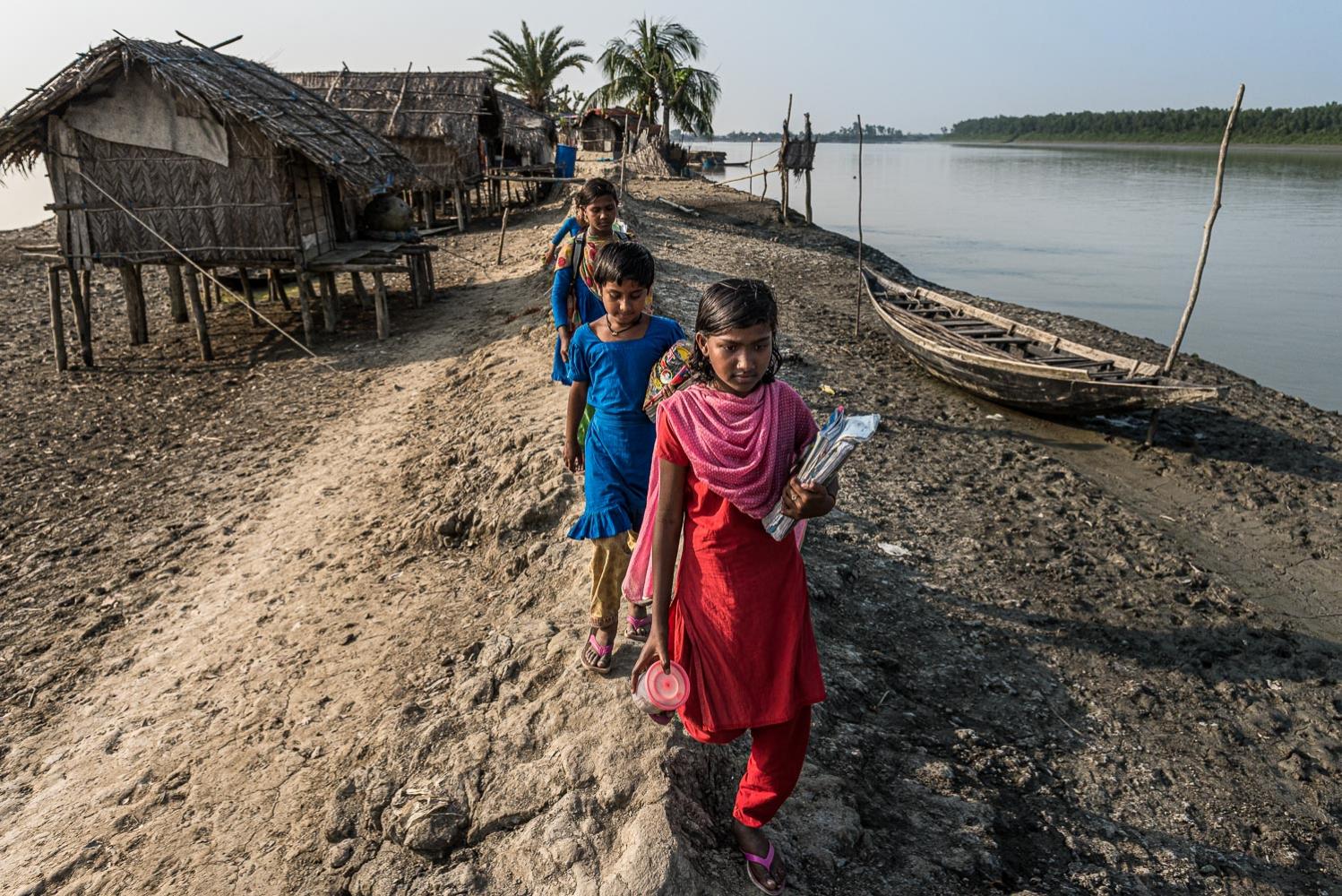 Girls go to the local school. A recent report by Human Rights Watch links the high child marriage rates of Bangladesh (4th higher in the world) to the consequences of climate change and especially to river erosion. Many affected families feel the necessity to marry their daughters they can no longer support. 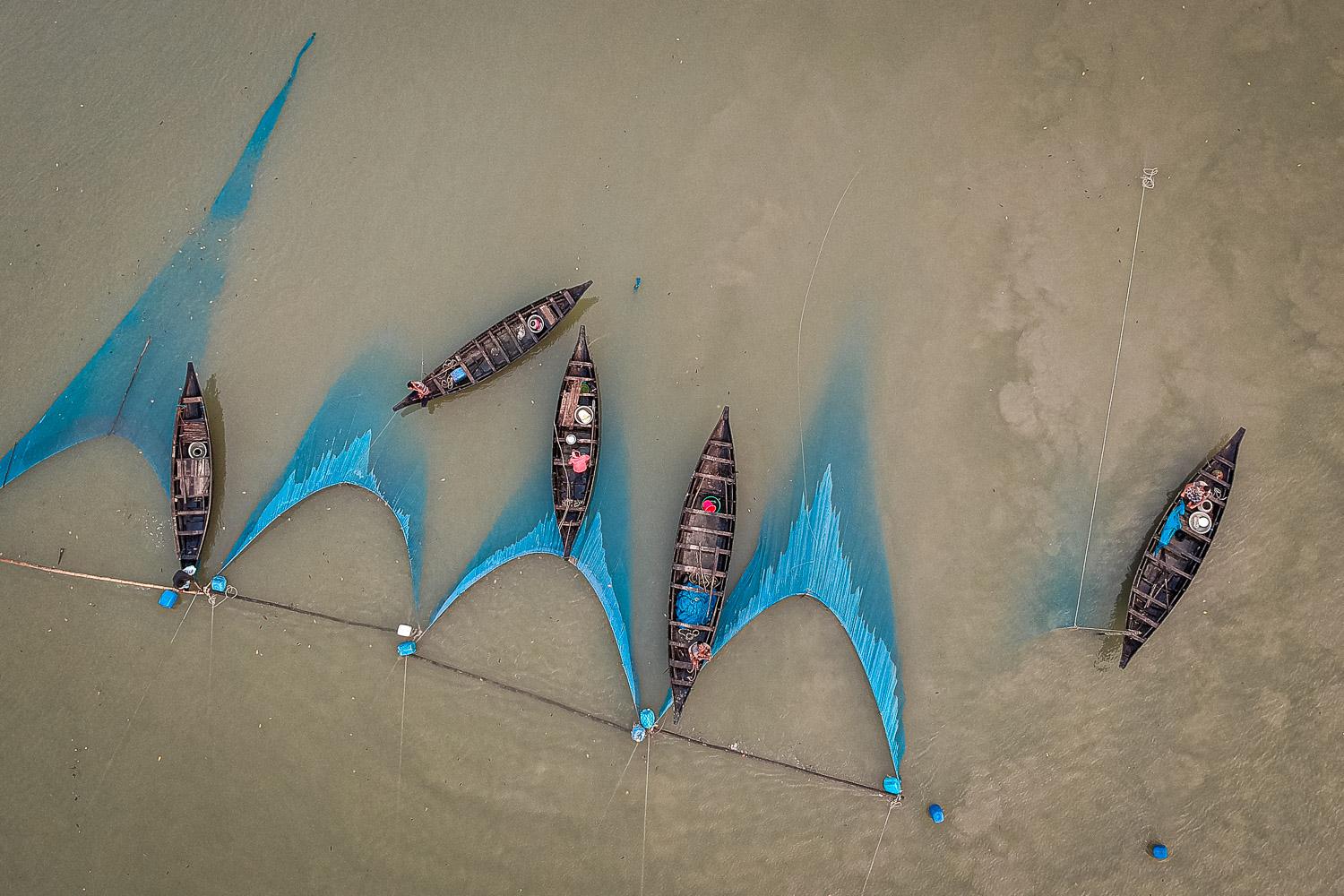 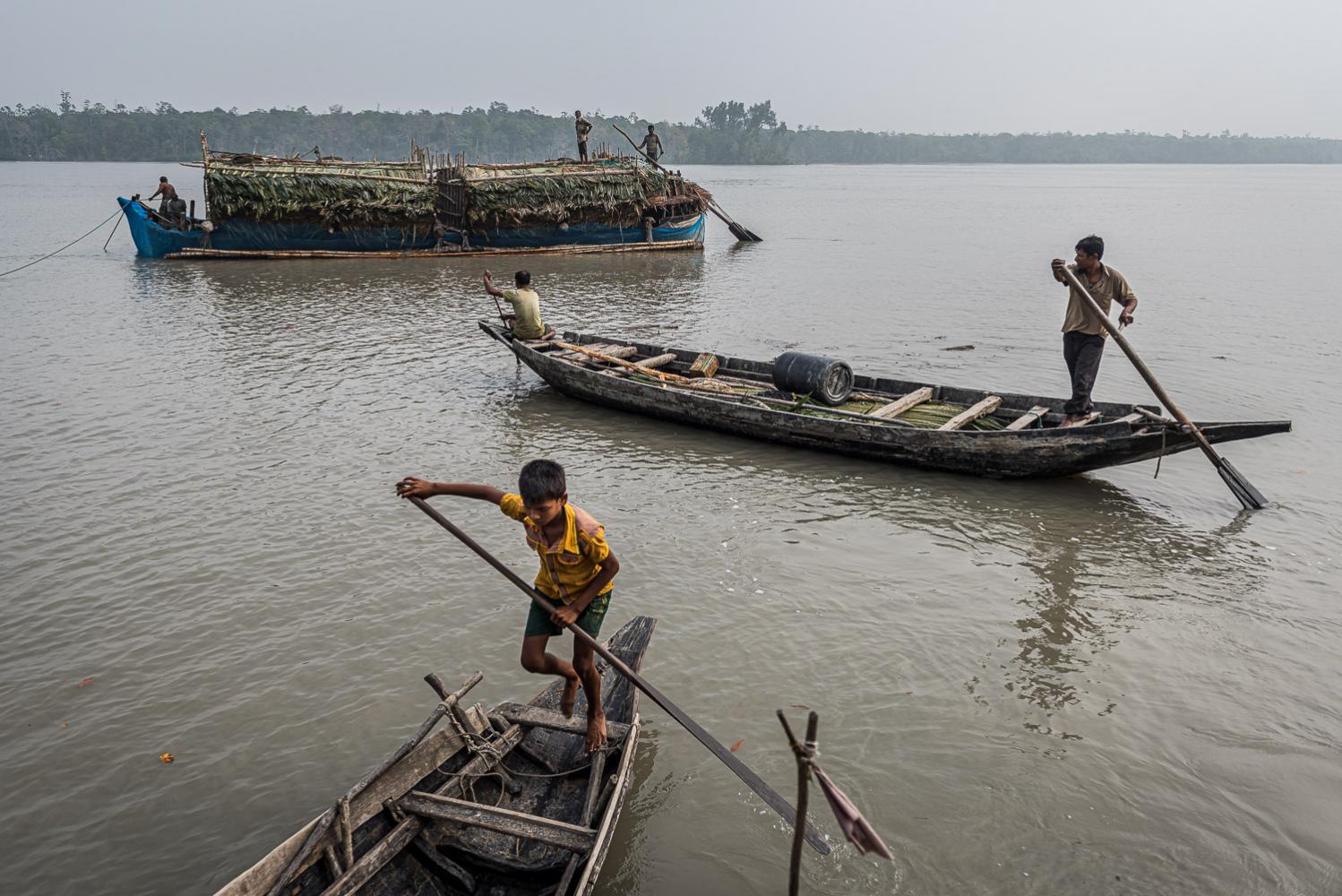 13 of 26 © 2021 Ignacio Marin
Villagers of Kalabogui sail in their boats. Kalabogui has become a floating village and its inhabitants, especially men, spend more time at their boats that on land. 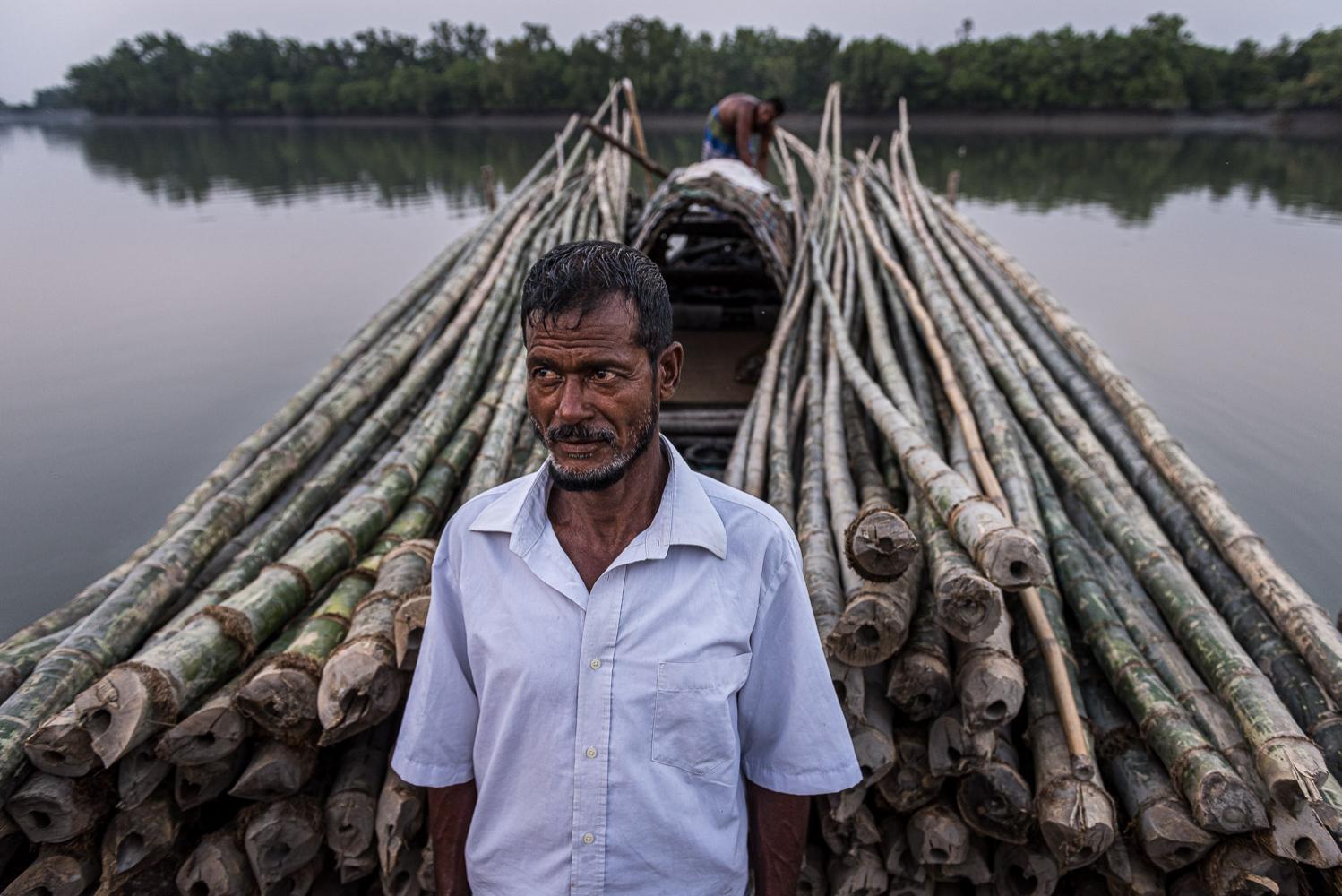 14 of 26 © 2021 Ignacio Marin
A man comes back after harvesting Golpata, a species of palm tree with large leaves that is used as constructing material. Despite the warnings from experts and researchers, government’s only policy is focused on climate change resilience and livelihoods strategies such as the Golpata harvest rather than addressing the real problem. 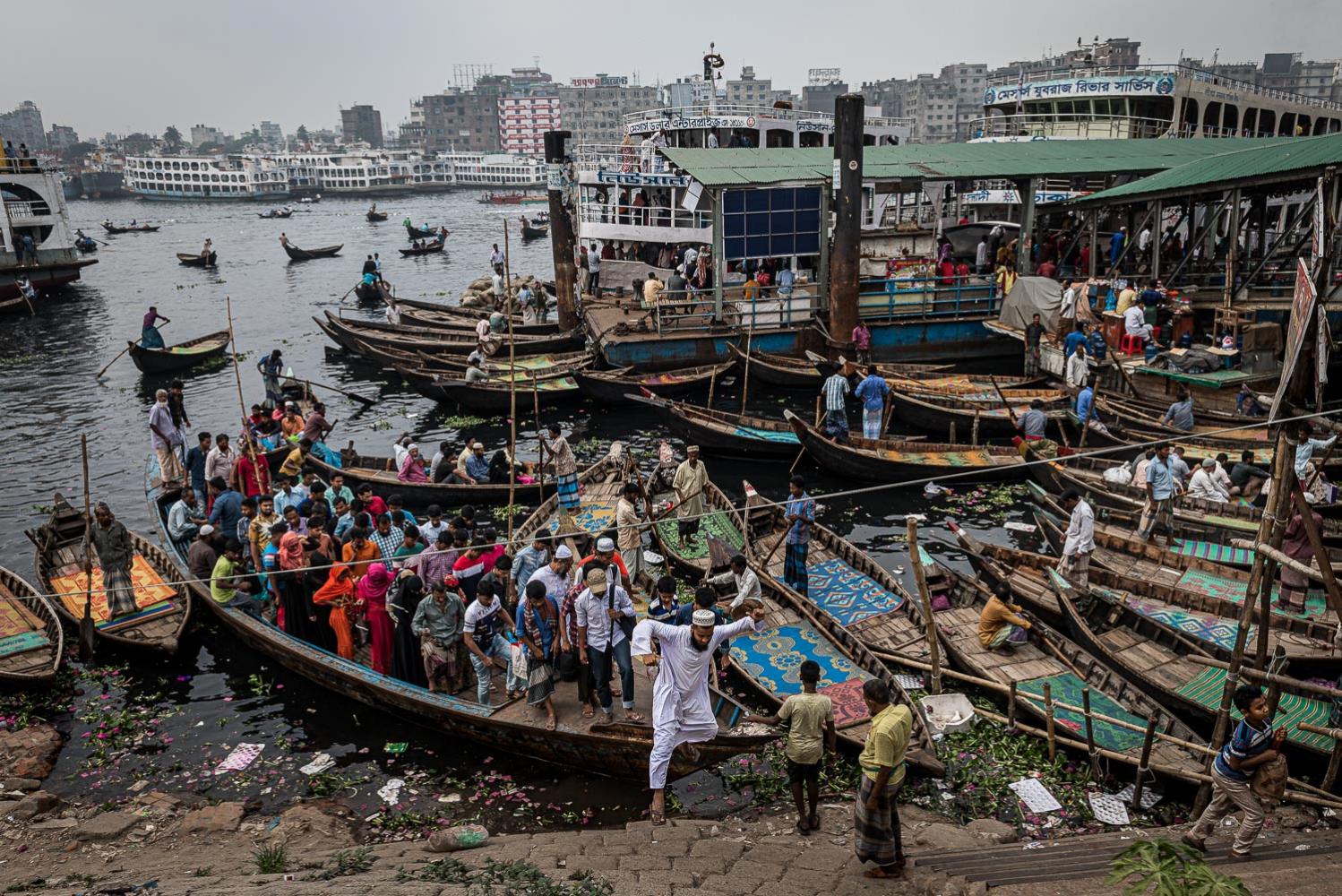 15 of 26 © 2021 Ignacio Marin
A boat arrives to Dhaka’s Sadarghat ferry terminal. Every day, thousands of people arrive to Dhaka fleeing from river erosion and flooding. Dhaka, the fourth least liveable city in the world according to The Economist and with a population of about 18 million people, is a city already on the edge of collapsing and struggling to provide basic services and infrastructure such as sanitation or water. 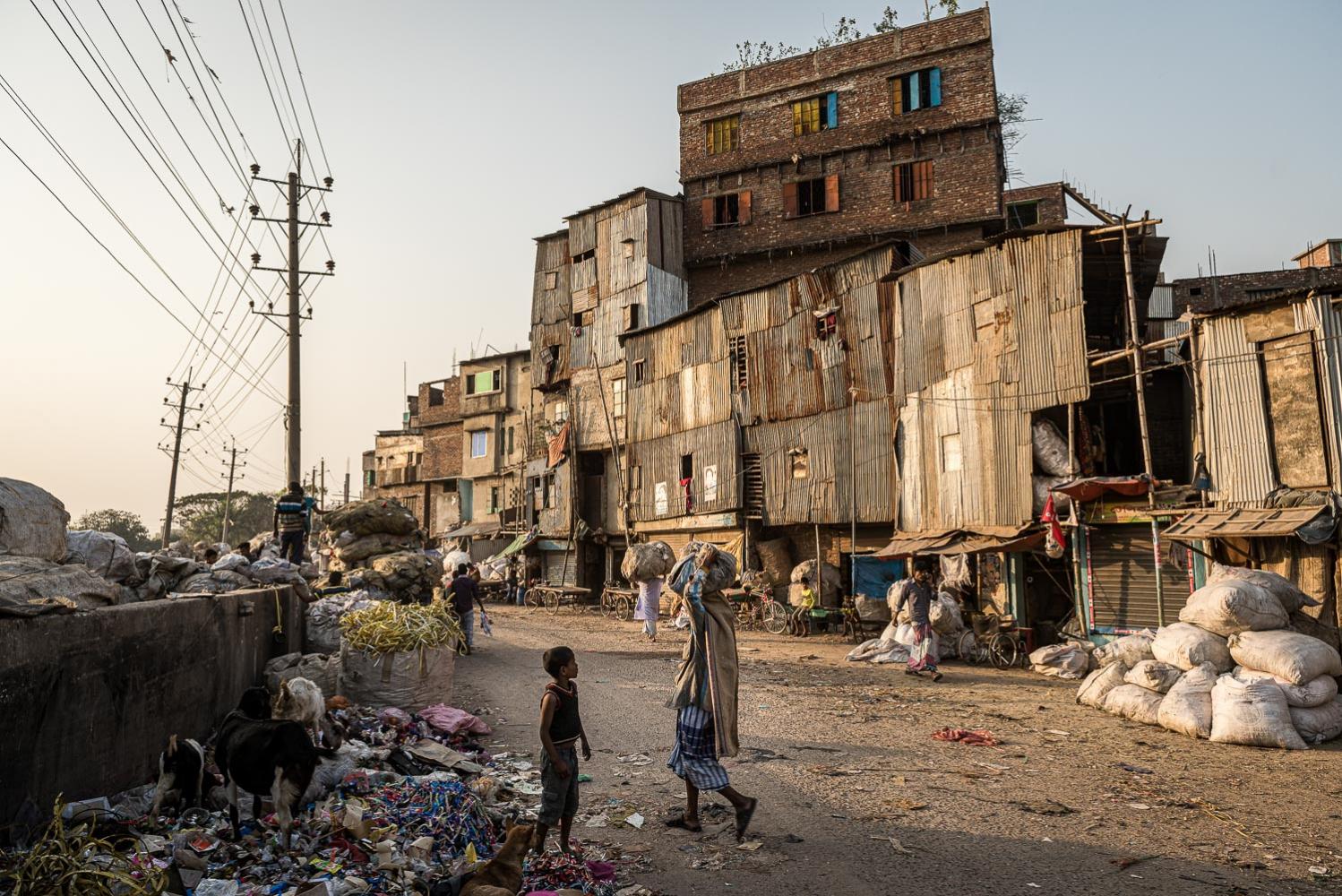 16 of 26 © 2021 Ignacio Marin
A boy collects garbage at the Islambag slum in Dhaka. Most of the migrants who reach Dhaka end up living is slums like this one. According to The International Organization for Migration (IOM), about 70 percent of slum dwellers in Dhaka have experienced some kind of environmental disaster. 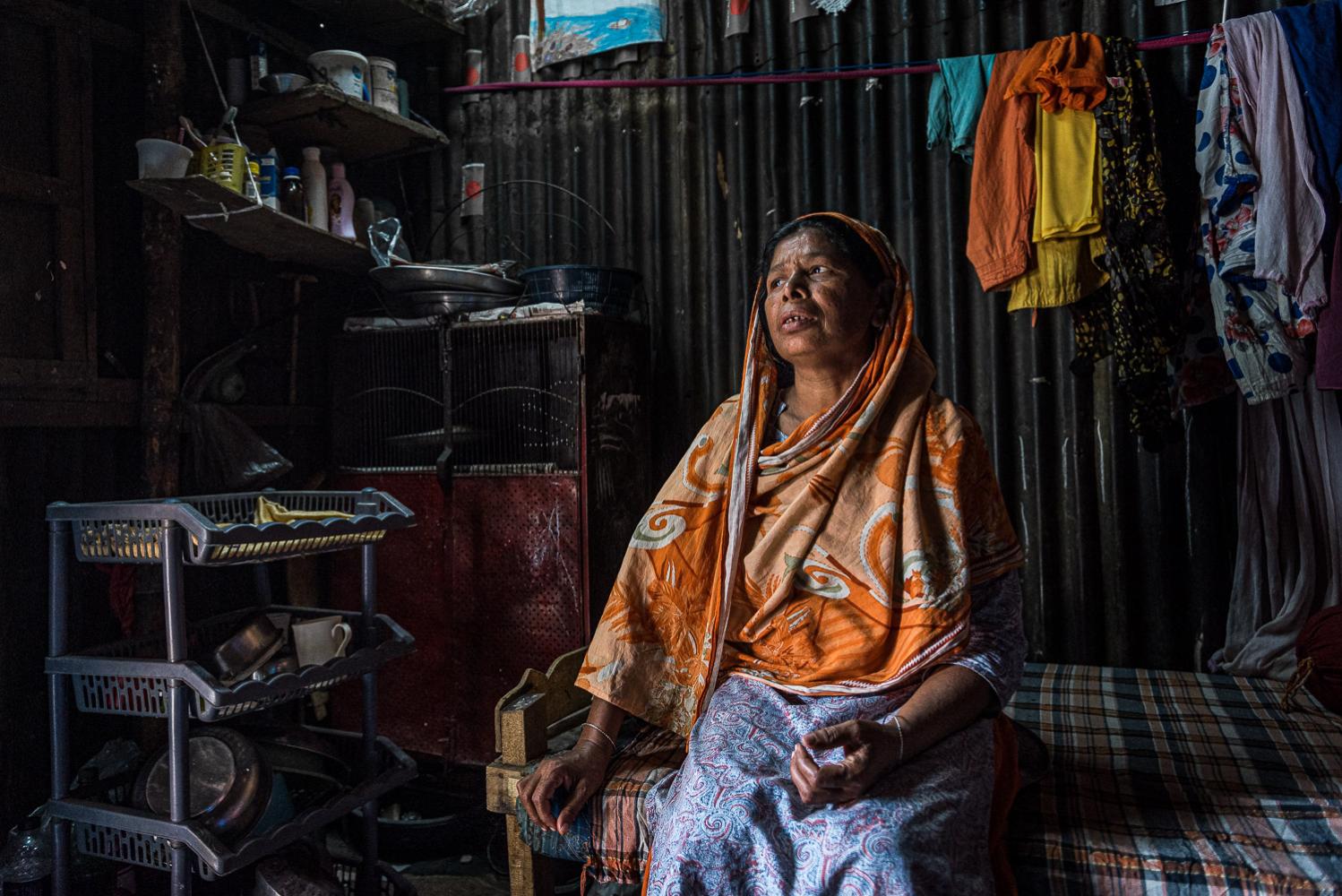 17 of 26 © 2021 Ignacio Marin
From a family of farmers, Noyom Tara and her family moved to Dhaka when the water reached their home. “First we lost our land and crops. Then, when we saw we would also loose the house, we sold the tin roof and the windows at the local market to pay for the boat ticket to Dhaka”, says. 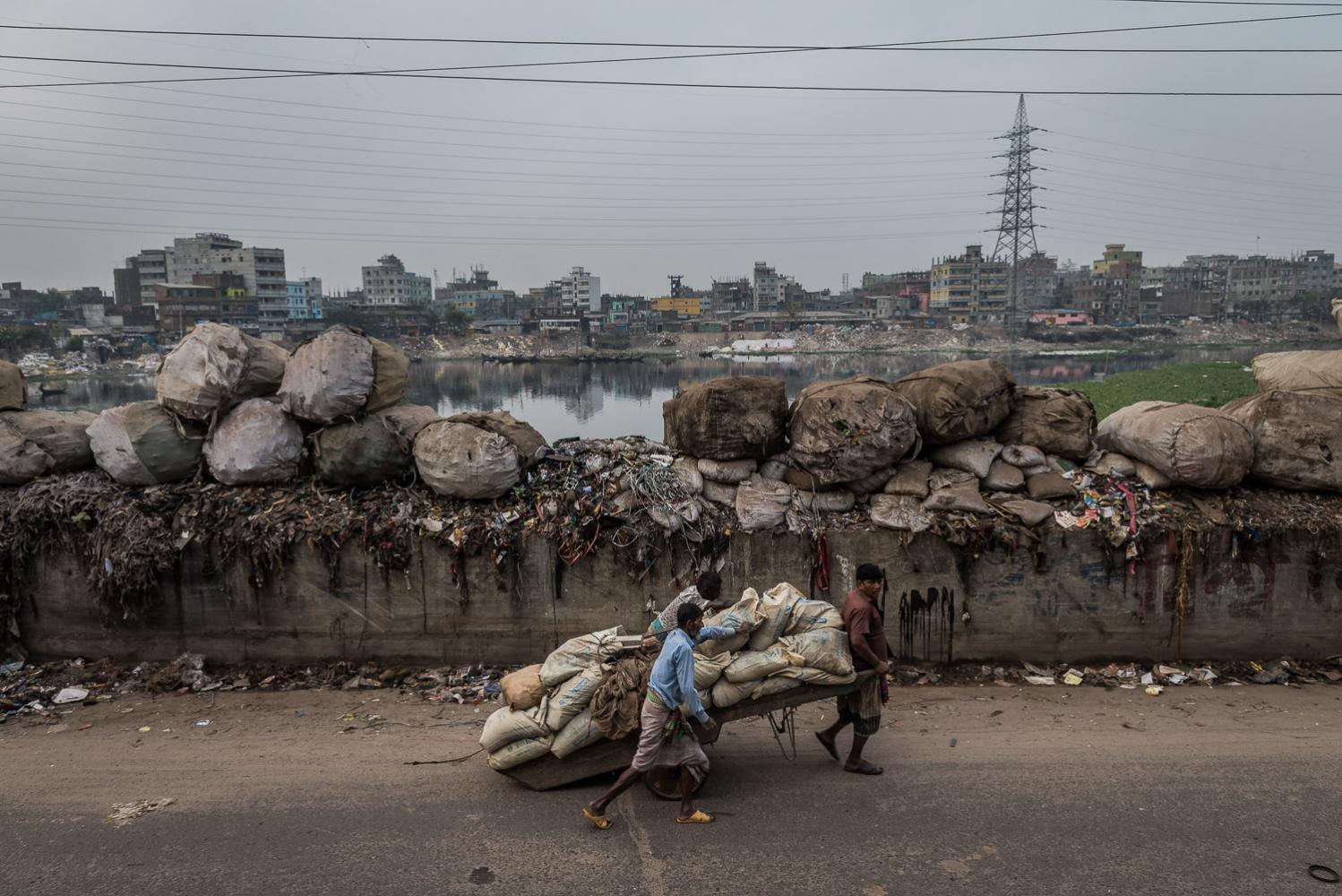 18 of 26 © 2021 Ignacio Marin
Men carry garbage at a slum in Dhaka. Living conditions are extremely
hard at the slums, where there are no public services. Most of the migrants who reach Dhaka end up living is slums like this one. According to The International Organization for Migration (IOM), about 70 percent of slum dwellers in Dhaka have experienced some kind of environmental disaster. 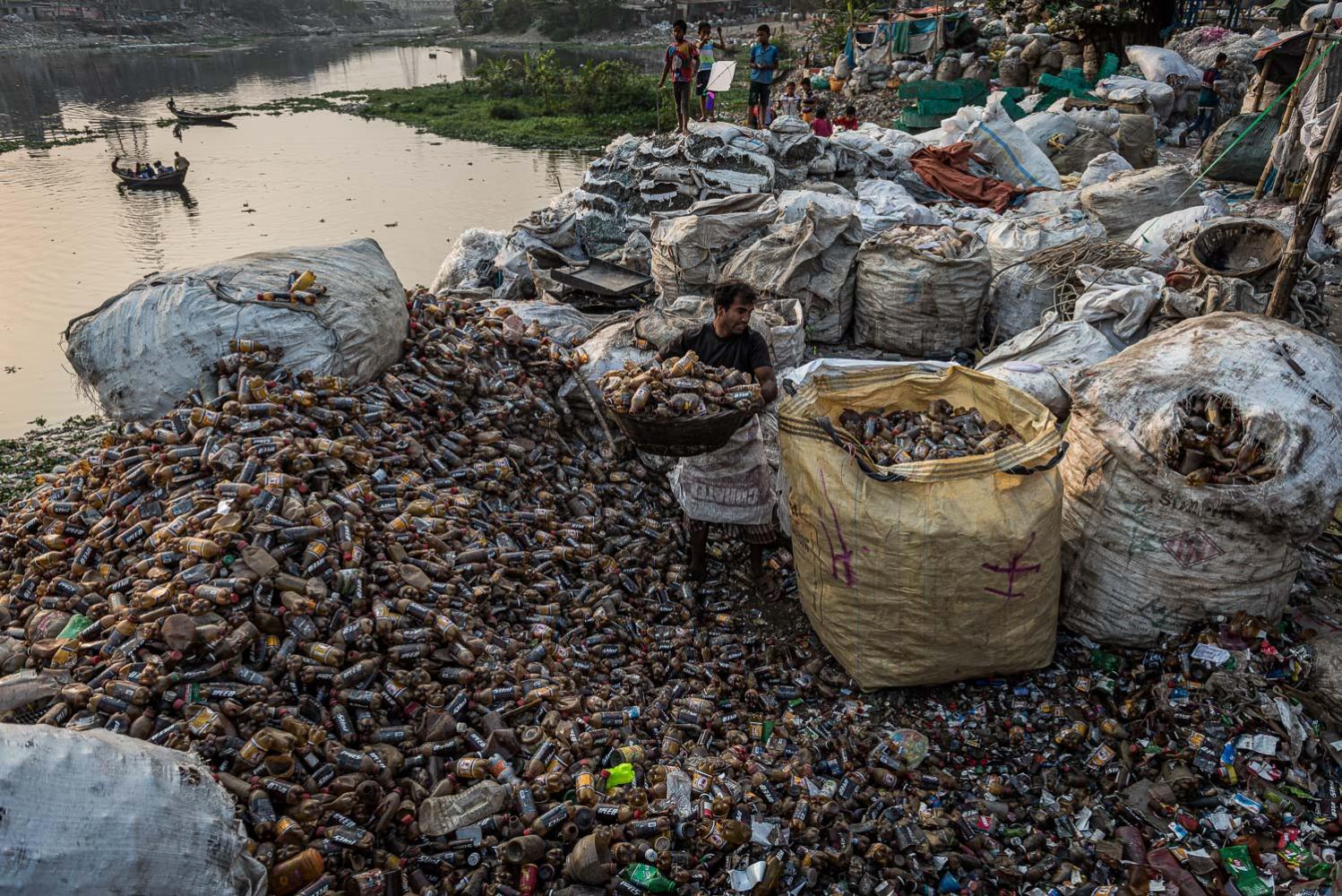 19 of 26 © 2021 Ignacio Marin
A man load a bag with plastic bottles at a dump site in Dhaka. Many environmental migrants end up having to take low wage and dangerous works when they arrive to Dhaka  in order to afford accommodation and food. 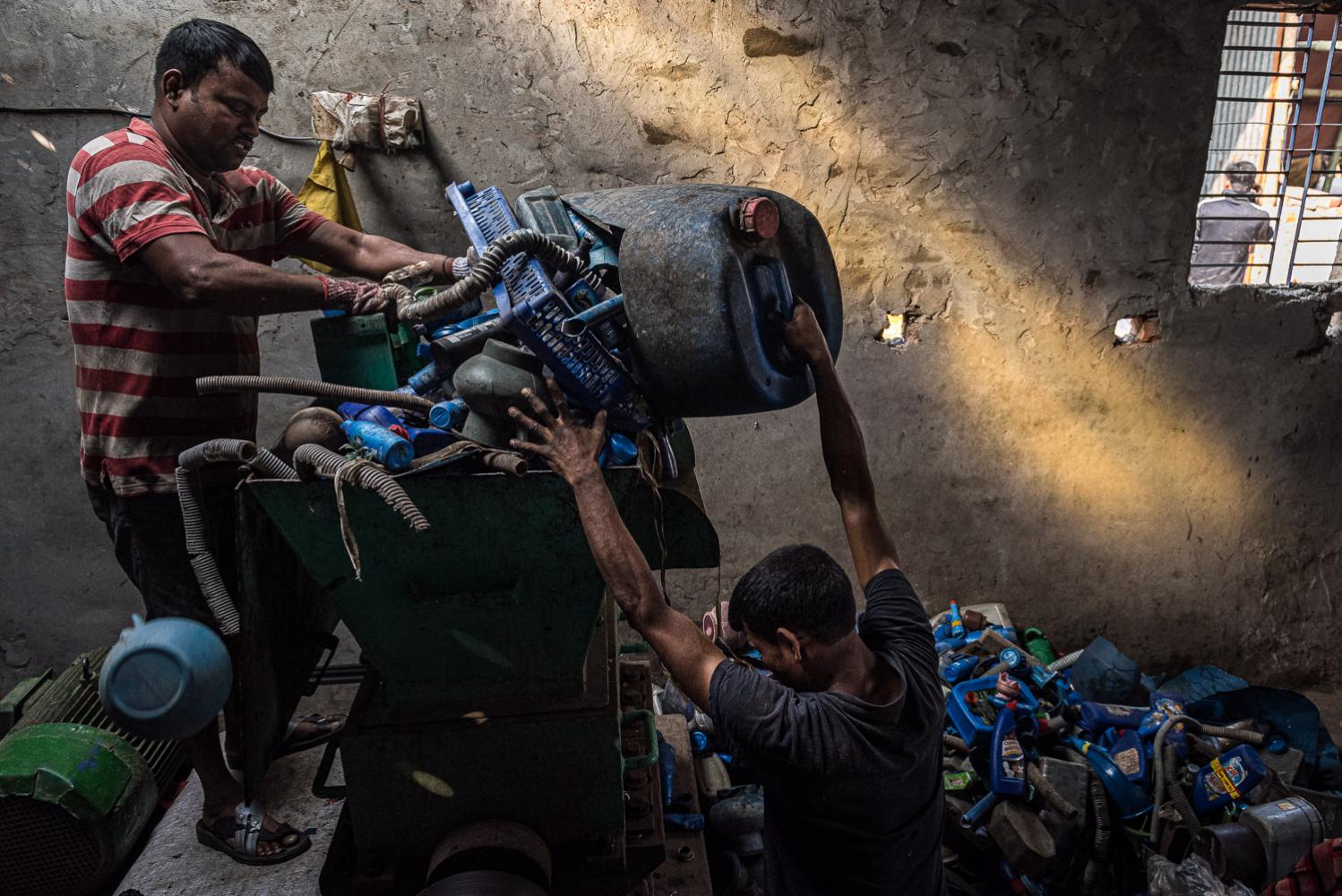 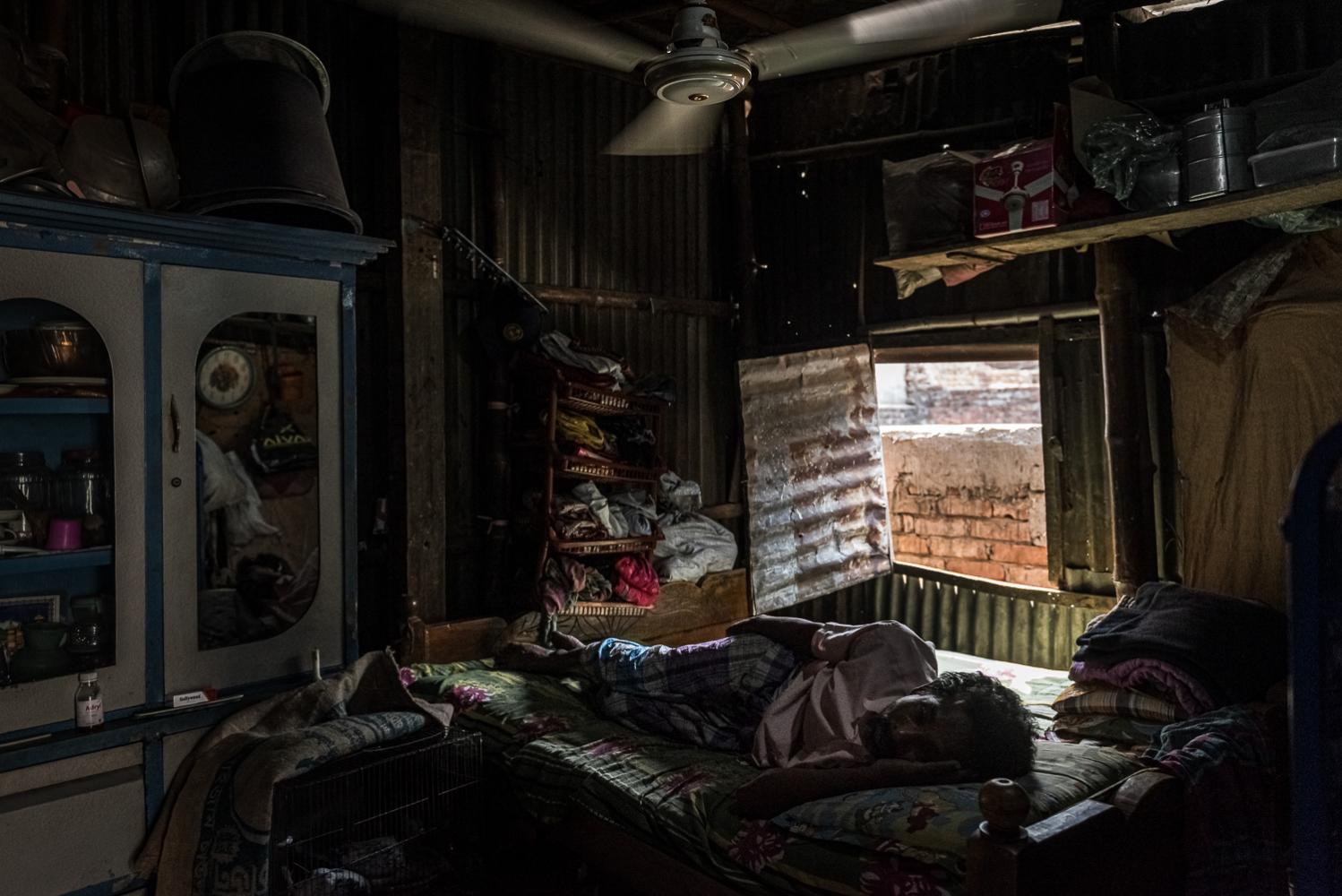 21 of 26 © 2021 Ignacio Marin
A man lies down at the single room he now lives in together with his wife and son. He currently works as a rickshaw puller, but his struggle with depression makes it very hard for him to go to work each day. 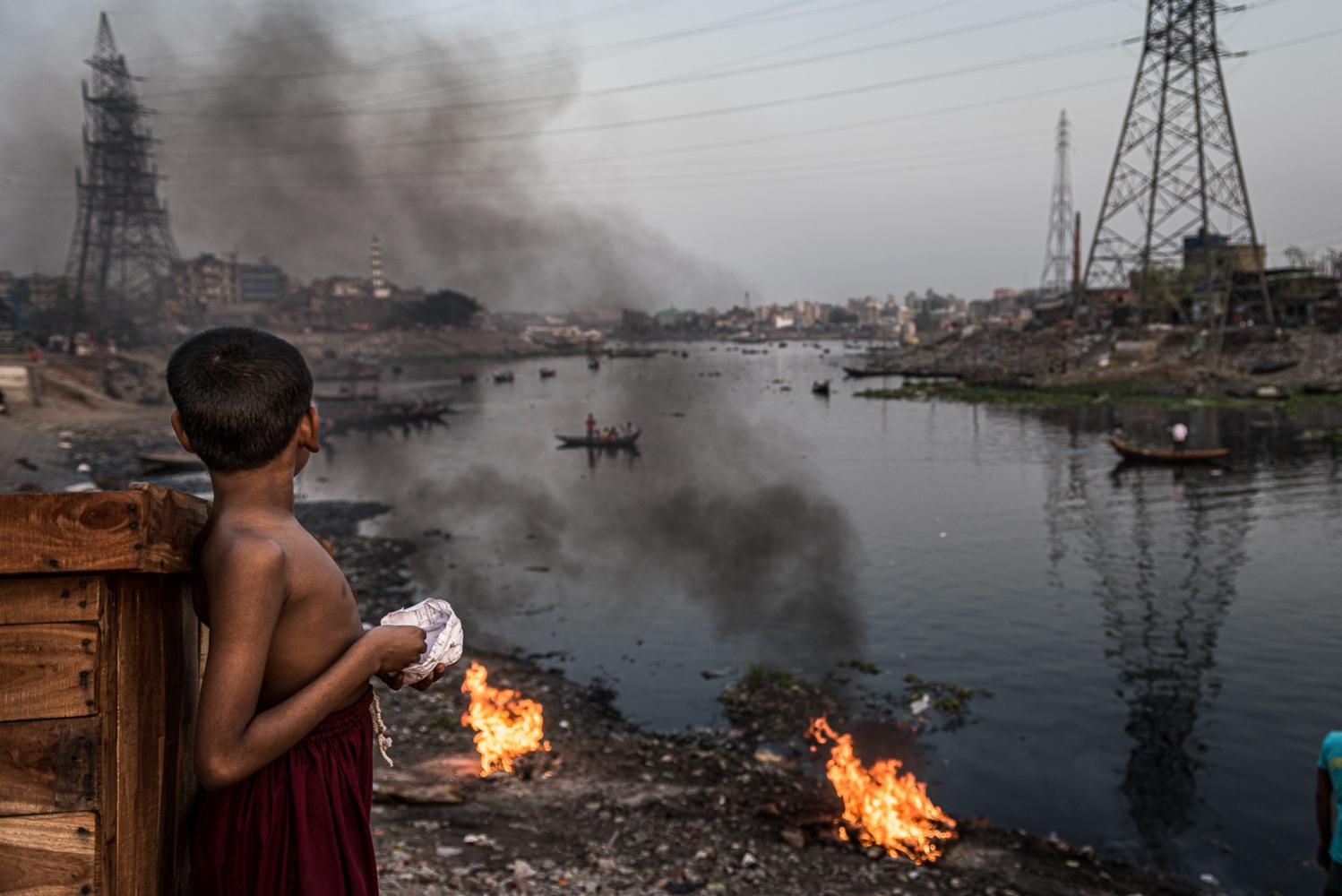 22 of 26 © 2021 Ignacio Marin
A boy stands by the Buriganga river, at the Islambag slum in Dhaka. With no government assistant or policy to help them, families that once were financially independent and owners of cattle and land find themselves struggling to survive. 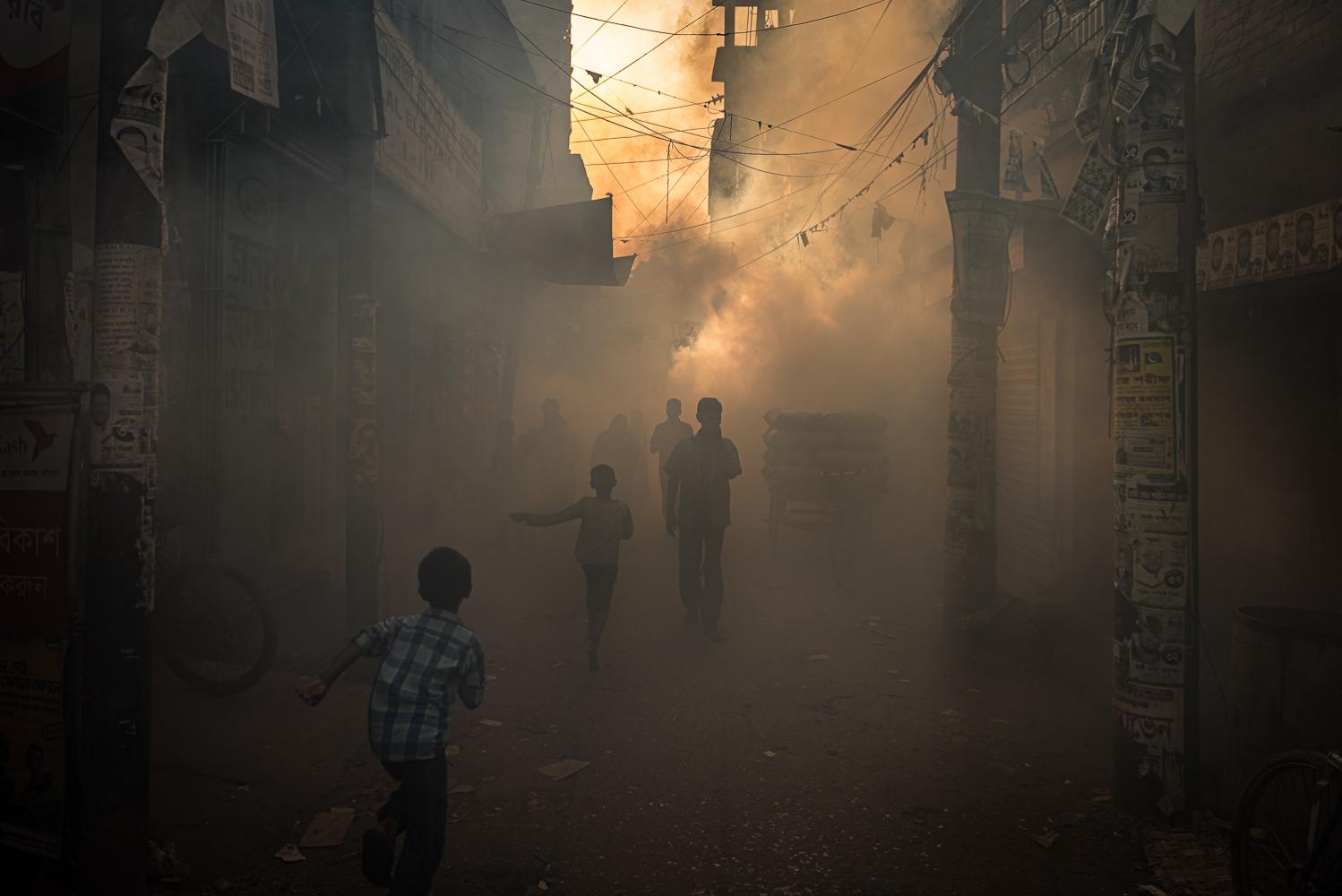 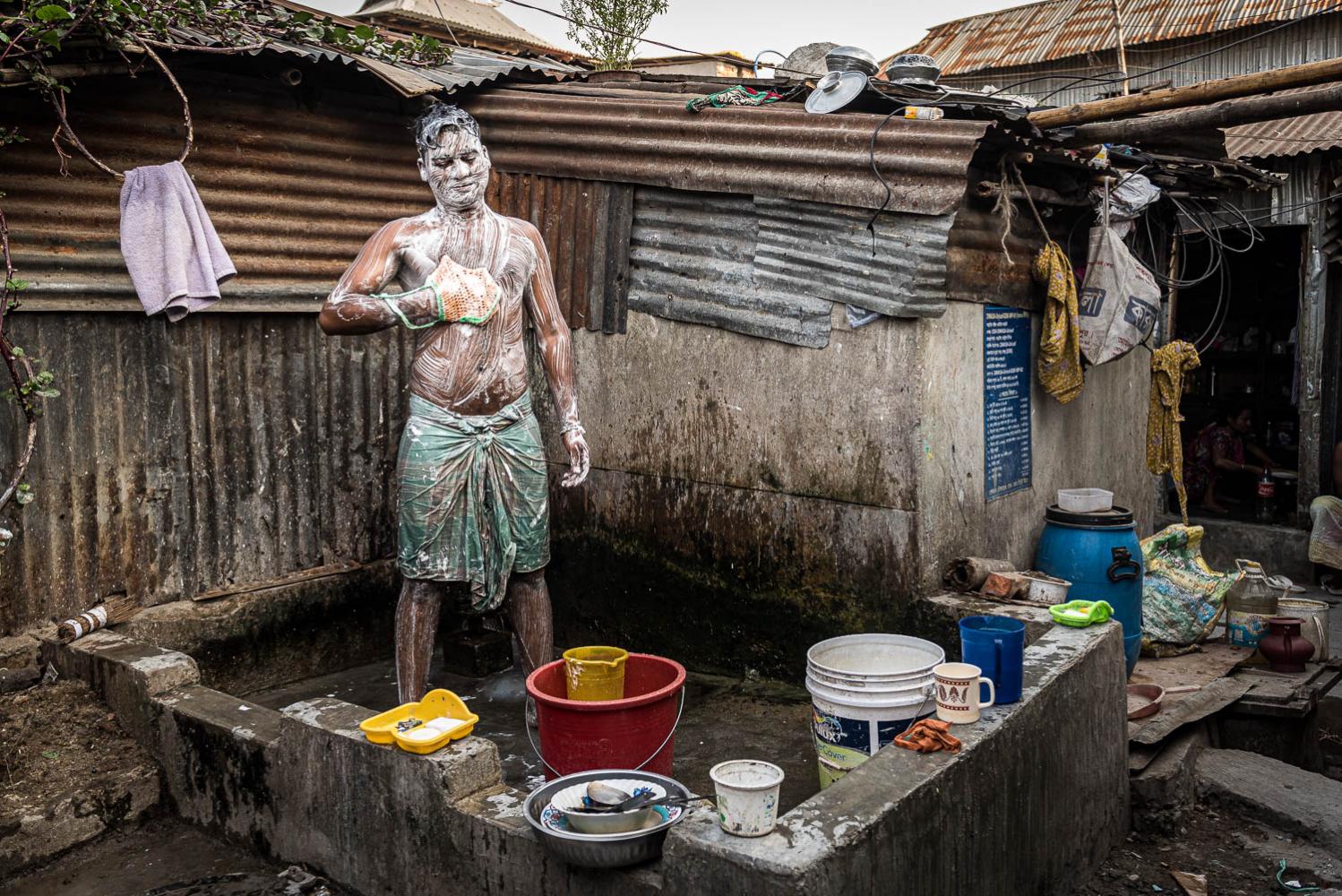 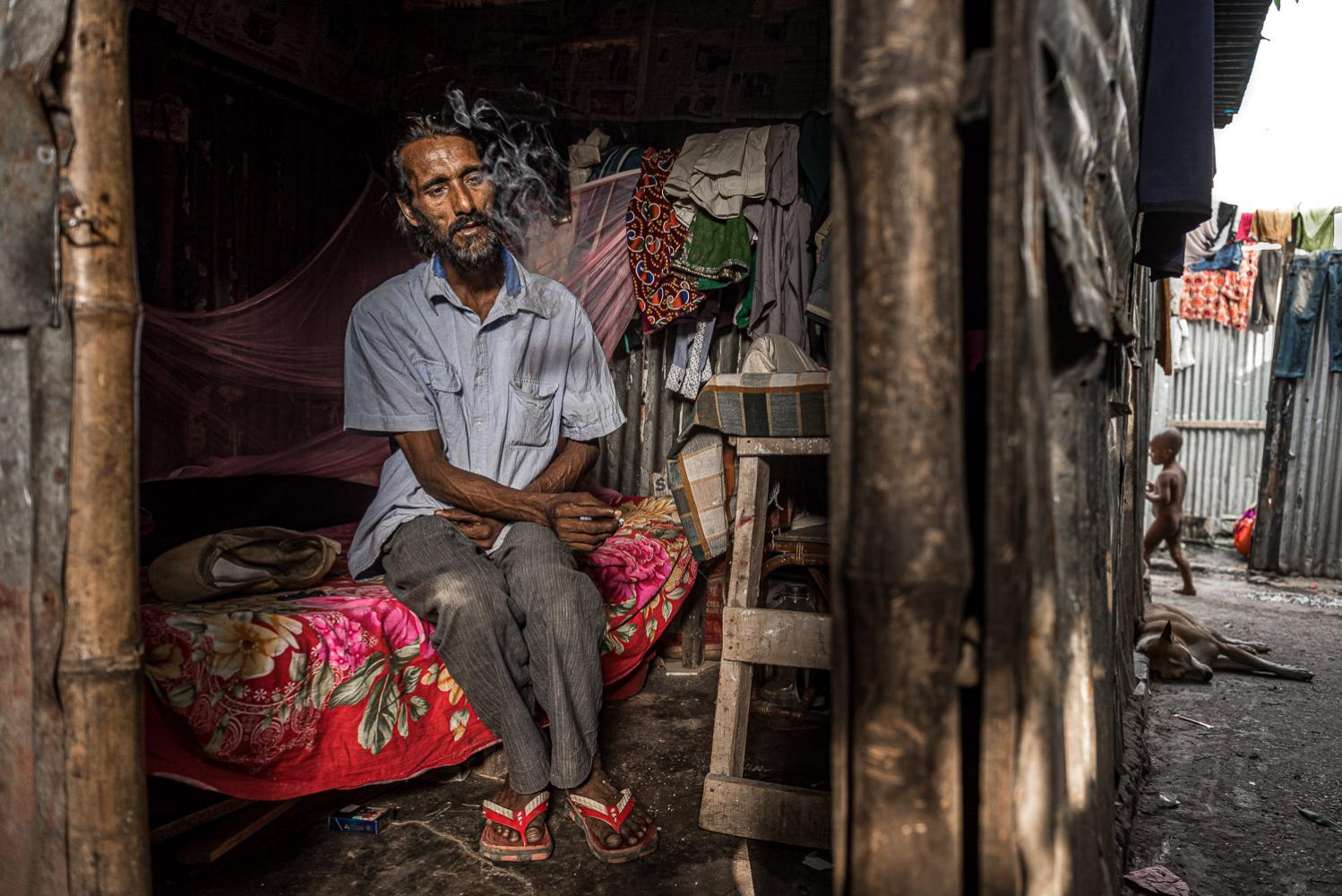 25 of 26 © 2021 Ignacio Marin
Jahangir smokes a cigarette at his house in the slum of Korail, in Dhaka. His entire village was drown into the river and he had to migrate with his mother and two daughters to Dhaka. To pay the rent of the tiny house where they all live, his mother, of 93 years old, has to work as a dishwasher at a luxury hotel. 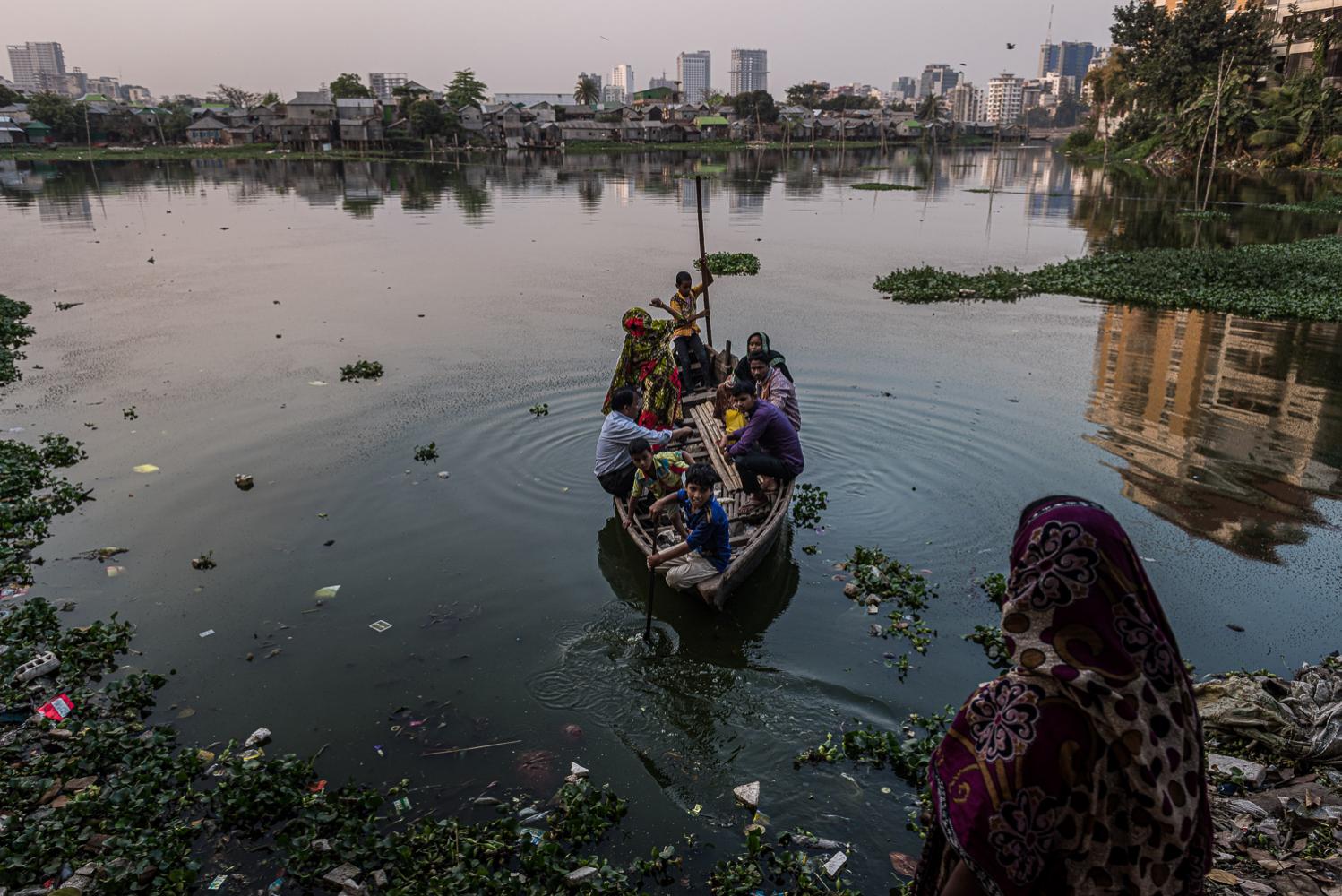 26 of 26 © 2021 Ignacio Marin
A boat carries people to the slum of Korail, in Dhaka.
Public Story
A drowning land
Credits: ignacio marin
Date of Work: 03/07/18 - Ongoing
Updated: 11/16/19
Location: Dhaka
Archived as:  Aerial, Bangladesh, Climate Change, Documentary, Editorial, Environment, Globalization, Photography, Photojournalism
A DROWNING LAND
In Kalabogi, a small village at the Sundarbarns, in the coastal region of the Bay of Bengal, Bangladesh, life is quiet and calm. There is no electricity, and the only engines that make a sound are those of the boats that navigate across the river. Here, the average carbon footprint may be close to non-existing. However, it’s villagers are very aware of the consequences of climate change: it’s a reality that they experiment on every raising tide.

Bangladesh, one of the most densely populated countries in the world, will also be particularly affected by climate change. Cyclones, sea level raise, flash floods and riverbank erosion is putting the livelihoods of millions of people at risk, just as it is happening in Kalabogi. Officially, Bangladesh, expects 10-13 million people to be forcibly displaced from coastal areas by 2030. By 2050, the figures could be as high as 20-25 million. This would be the largest migration in the history of mankind.

As the former residents of Kalabogi already did, many of these climate refugees will seek shelter in Dhaka, Bangladesh’s capital. By the time they arrive, they will have lost their ancestral land, livestock and homes. But their hardships will not end here. Dhaka, a city which is already on the verge of collapsing, is incapable of hosting more people and with no government support, most of them will end up living in slums and working in low-wage works.

By Ignacio Marin / Caracas, venezuela — THE LAW OF GOLD AND LEAD  Venezuela used to be the wealthiest nation in South America. Today, is in..
Nov 16, 2019