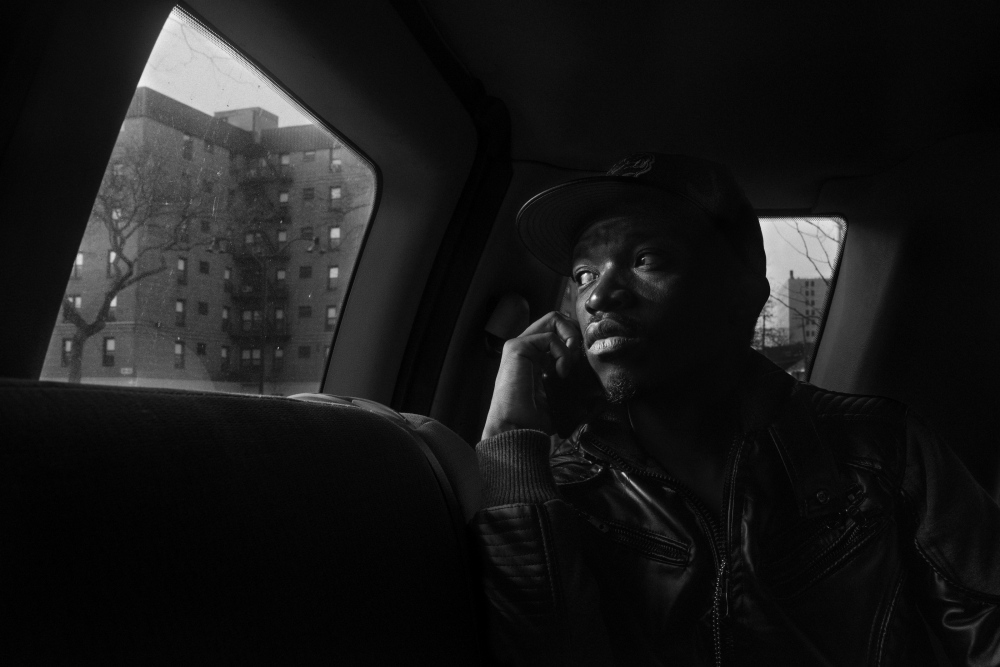 Carl Kelly, goes to visit his mother after being in Rikers Island for around a month. Carl had struggled to find a job until he was hired as a city leaf picker before he was arrested for violating his parole conditions by having police contact when the police asked for his ID while searching the apartment where he was at. April 21th, 2016. 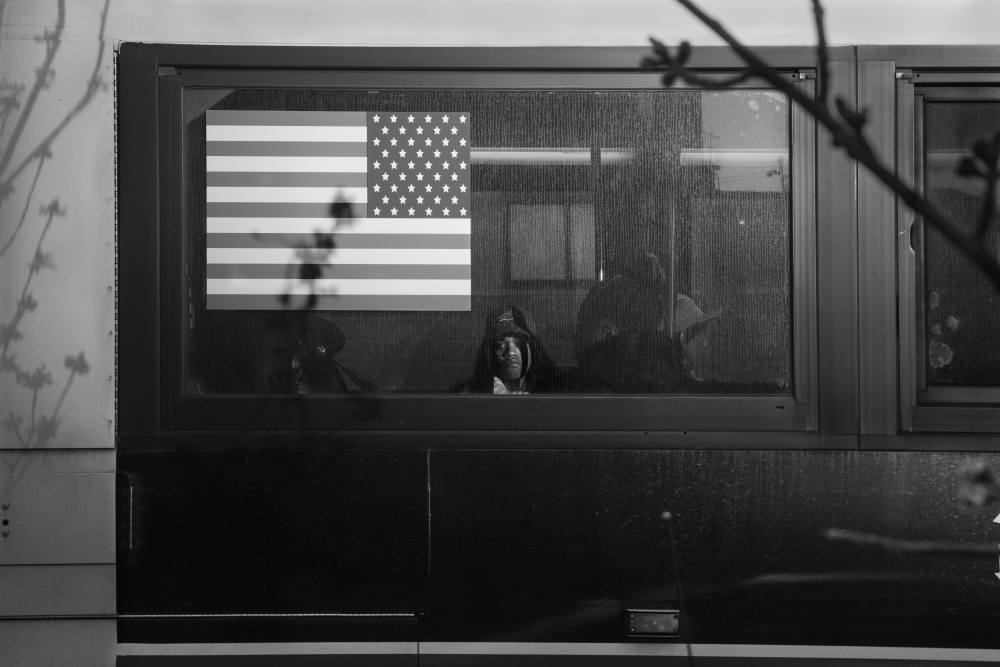 A woman looks out of the Q100 bus that connects the city with Rikers Island. After getting off the bus visitors must go through multiple security checks. In recent years, there have been numerous reports of CO's performing illegal strip searches to visitors. The entire process of visiting a detainee can take up to 7 hours. April 3rd, 2016 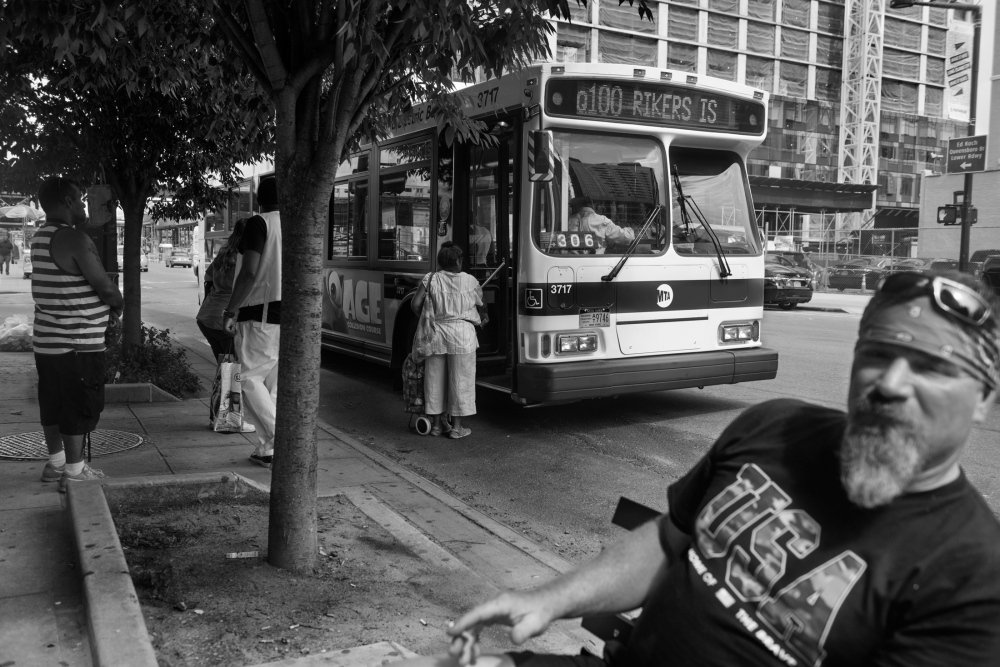 Rikers Island isolated location makes it difficult for visitors to go to the island; many end up spending a whole day between transportation and security checks for a one hour visit. The only way to get to the island by public transportation is taking the Q100 bus that departs from Queens Boreau Plaza in Long Island City. 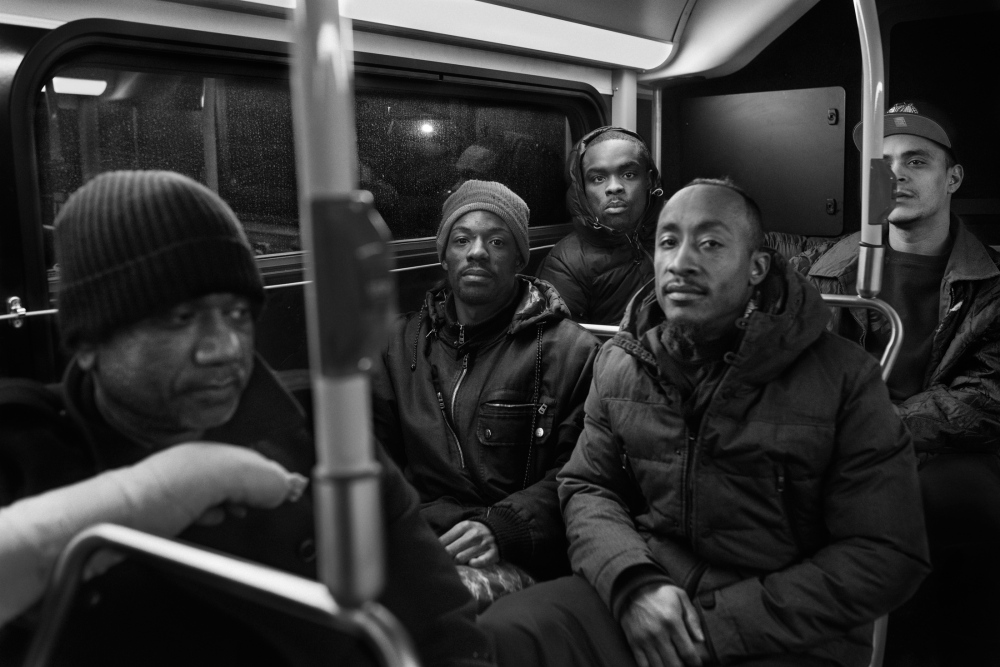 4 of 26 © 2021 Tomas Mantilla
Around 80% of Rikers population has not being convicted or proved guilty but as they can not afford to post they have to remain in jail while awaiting trial. Five formerly incarcerated men ride the Q100 bus after being released from Rikers Island.  All of them were released after posting bail.  From left to right Mohamed Ali Sha, 43, Rando Arison, 29, Kern Isaac, 21, Alfredo Gonzales, 36, and Luis Marino, 33. February 13th, 2016. 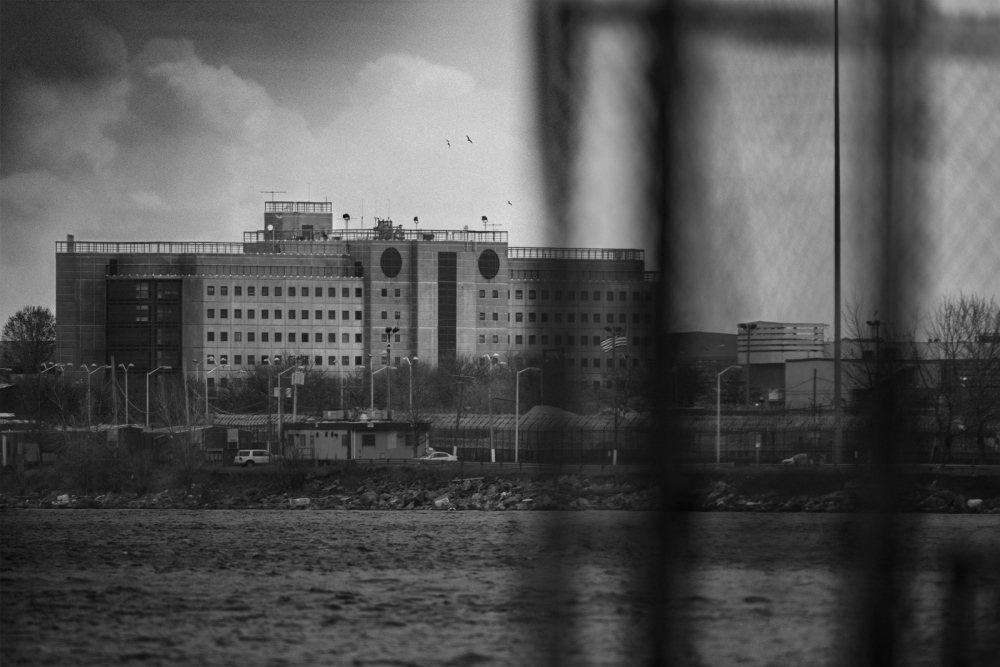 5 of 26 © 2021 Tomas Mantilla
With 413 acres, ten jails, and a clear over-representation of New York City’s Black and Latino communities, Rikers Island is the second largest jail in the U.S. The island holds around eight thousand detainees on any given day. Eighty-five percent of them have not been convicted and are kept inside while waiting for trial, often for several months as they can’t afford to post bail. The George R. Vierno Center, as seen from the south Bronx shore is a 1350-bed jail that includes solitary confinement units where inmates spend up to 23 hours a day inside their cells, a practice that has been medically proved as extremely harmfull and with counterproductive effects. 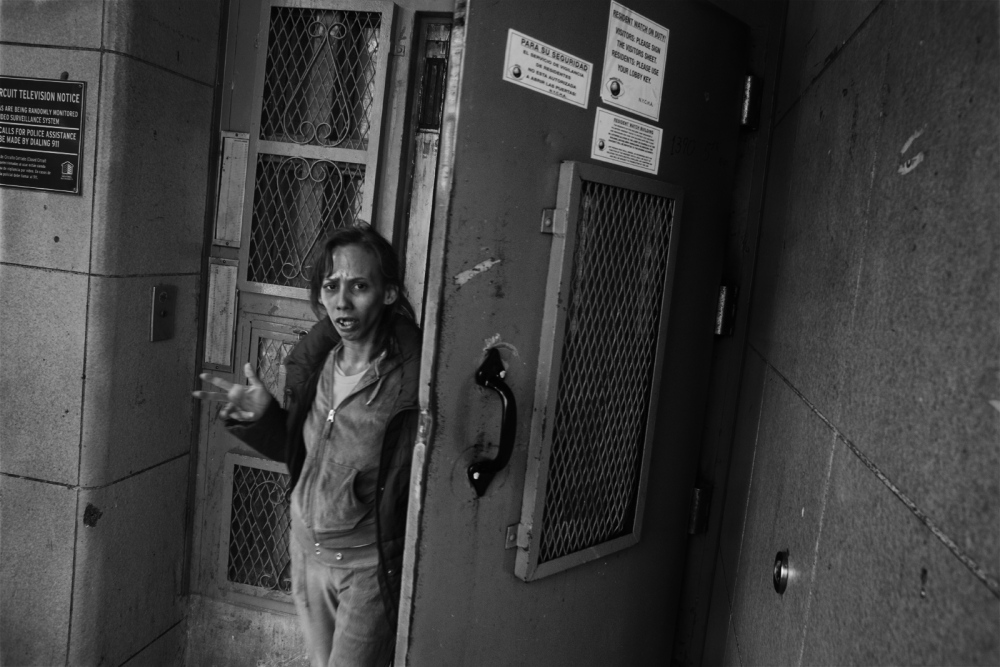 Yahaira De Jesus comes out of a housing project in her neighborhood in West Harlem where she was trying to buy a dose of crack cocaine one hour after being released from Rikers Island.

The first 24 hours after someone is released are crucial to their reintegration process and in many of the cases no reintegration services at all are provided for inmates with mental health issues. 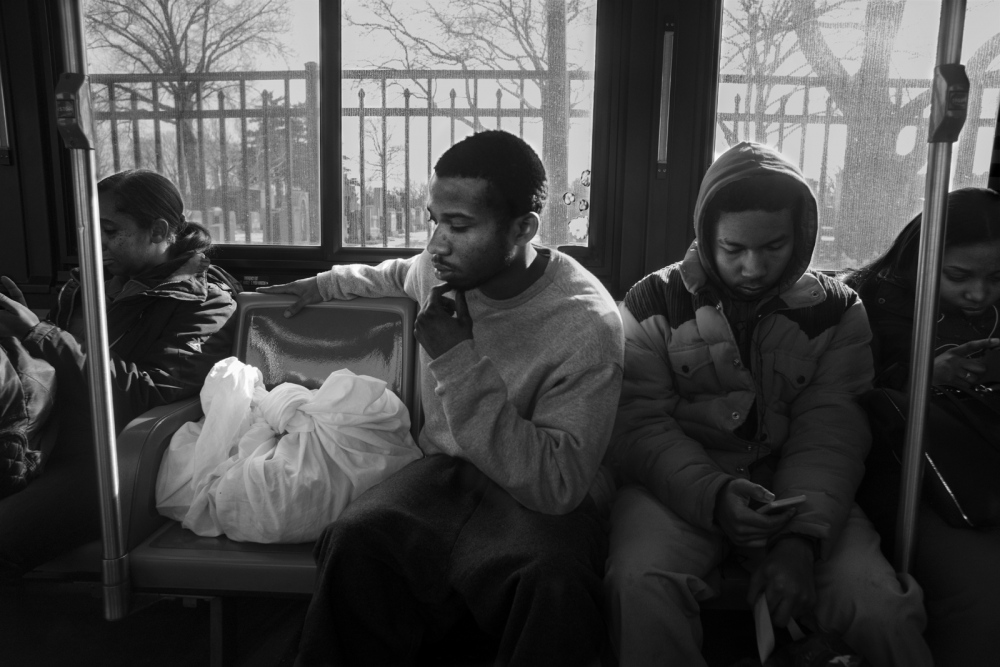 Terrell Henley going to his home in Queens after being released from Rikers Island. He spent one and a half months inside. About his experience, he said, "It's terrible in there, the first five days I spent there was on hard floor, no beds, with another fifty people, no food no water, rats running around, it was raining inside, they have holes in the ceiling and everything". He was bailed out on a 200.00 dollar bond bail. He was also "jumped" by Correctional Officers inside. March 4th, 2016 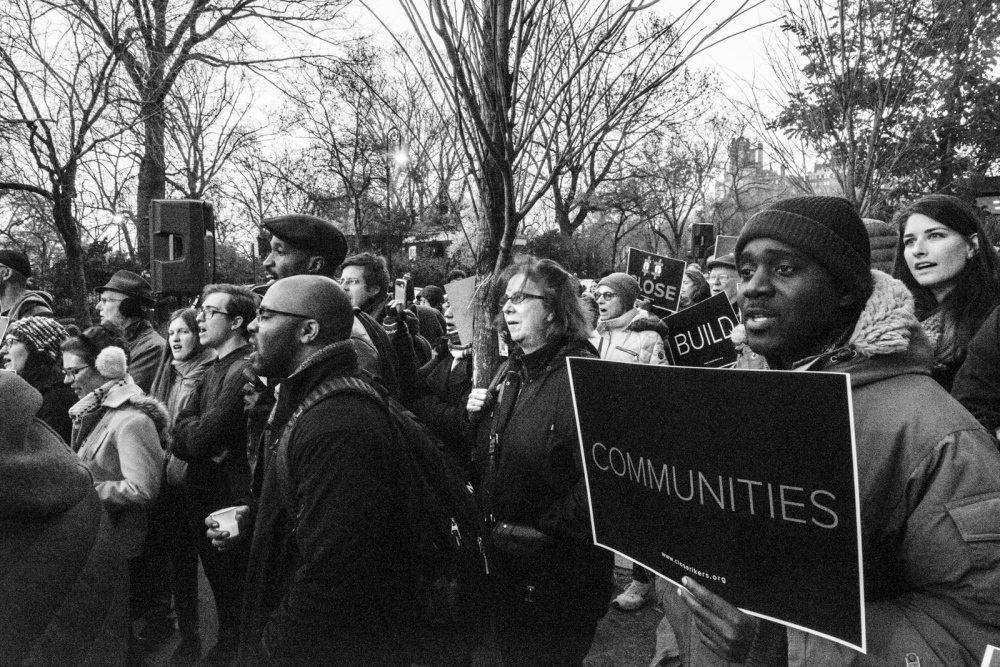 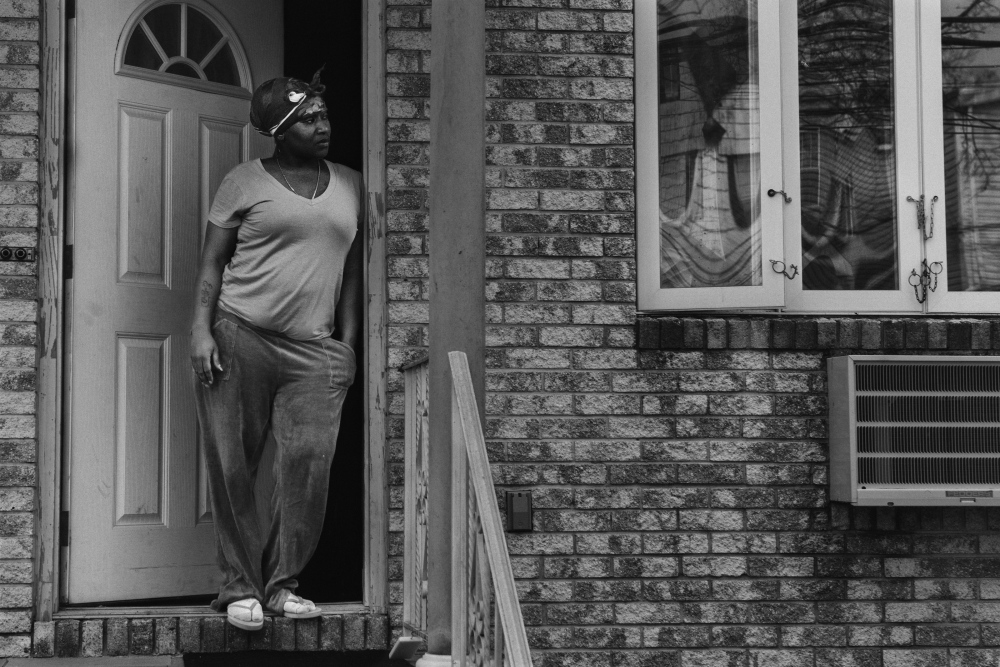 Lenora Kelly in her porch in East New York. Her son, Carl Kelly, is on Rikers Island for having police contact after being released from a previous conviction. Carl was listening to music in an apartment where the police came because two women were arguing. Although Carl wasn't involved, he was arrested as he was on parole and can not have any type of contact with the authorities. At the moment Lenora didn't know where her son was kept as the DOC would not give her any information. March 28th, 2016. 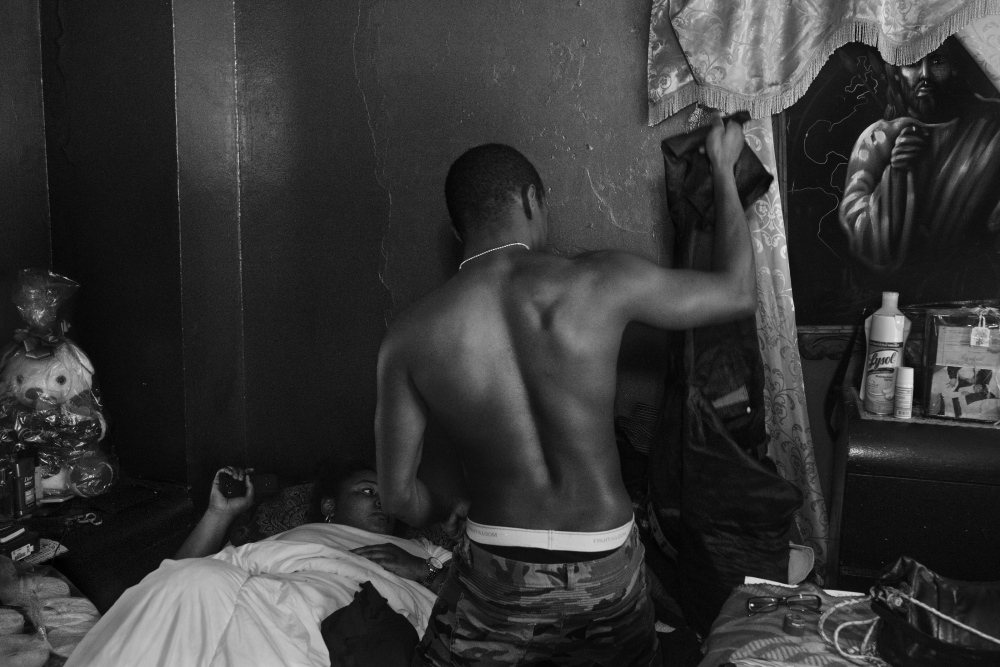 10 of 26 © 2021 Tomas Mantilla
Carl Kelly, gets ready with his girlfriend "Cookie" to go and visit his mother after being on Rikers Island for having police contact after being released from a previous conviction and while on parole. April 21th, 2016. 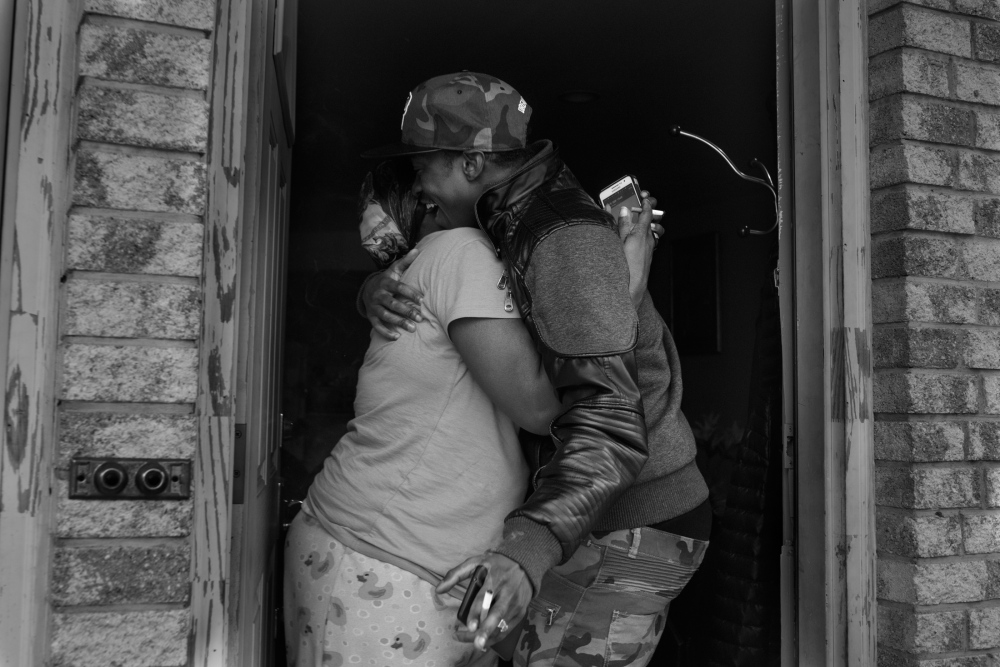 Two days after getting released from Rikers Island, Carl Kelly gets reunited with his mom at her house in Far Rockaway. His mother did not know where he was while he was imprisoned as the department of corrections would not give her any information. April 21st, 2016. 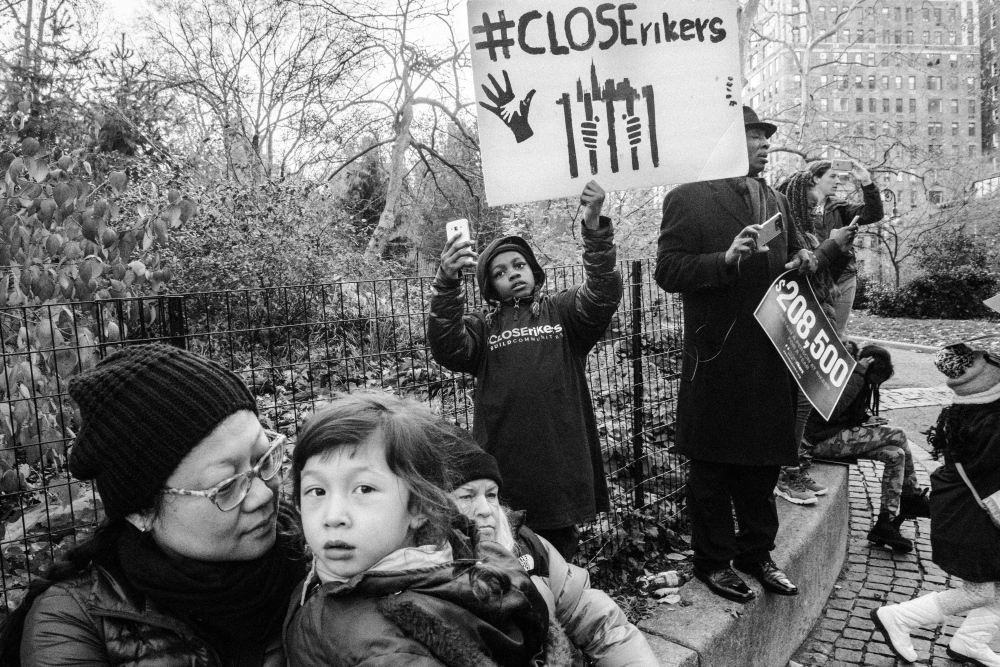 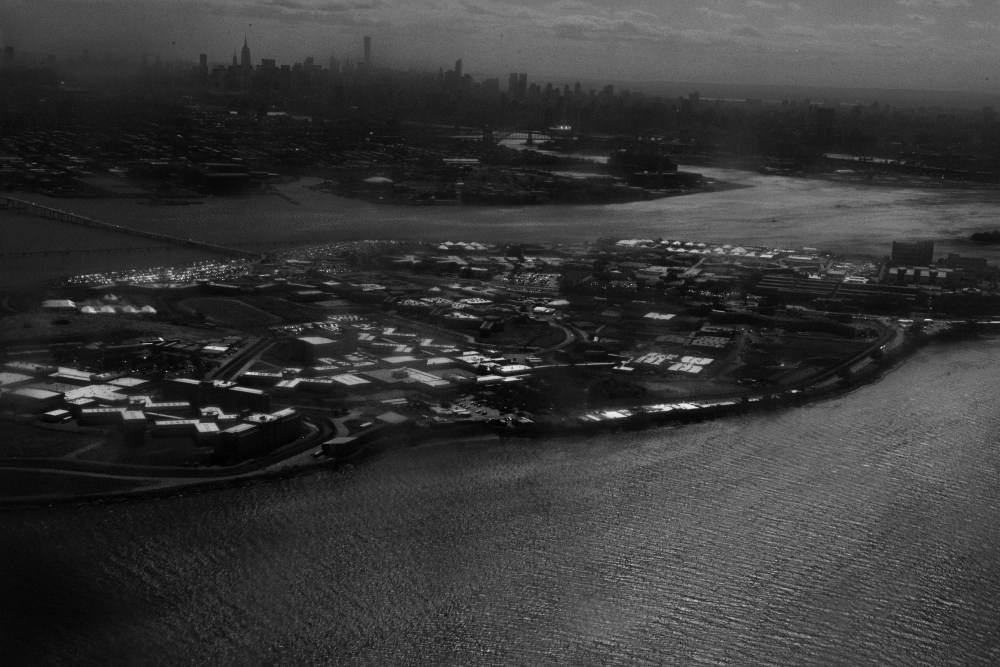 Rikers Island as seen from a plane that departed from La Guardia Airport. A clear view of the island is hard to get from anywhere in the city but thousands of people who land and depart each day from La Guardia get a clear overview of it many times without knowing what the island is. June 9th, 2016. 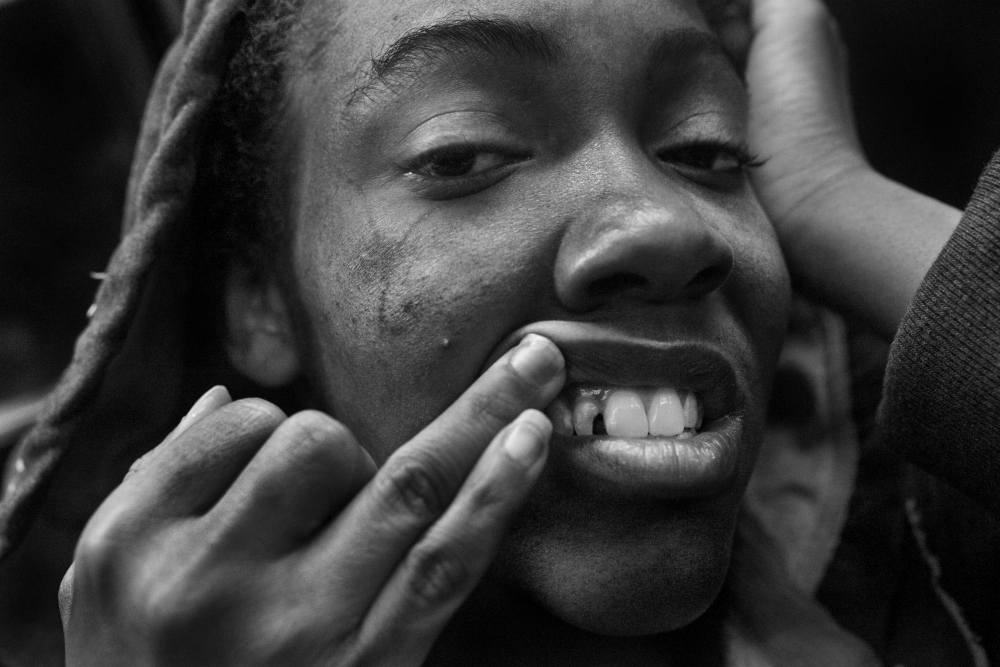 14 of 26 © 2021 Tomas Mantilla
April 4th, 2016. Tanae Jordan, 27, after being released from Rikers Island. While inside she got into a physical altercation with another inmate and was aledges than then was pepper sprayed and  slammed against a wall by a CO, cracking one of her teeth. The lack of training of the correctional officers leads to hundreds of incidents that with the appropriate skills could be handled safely. April 4th, 2016. 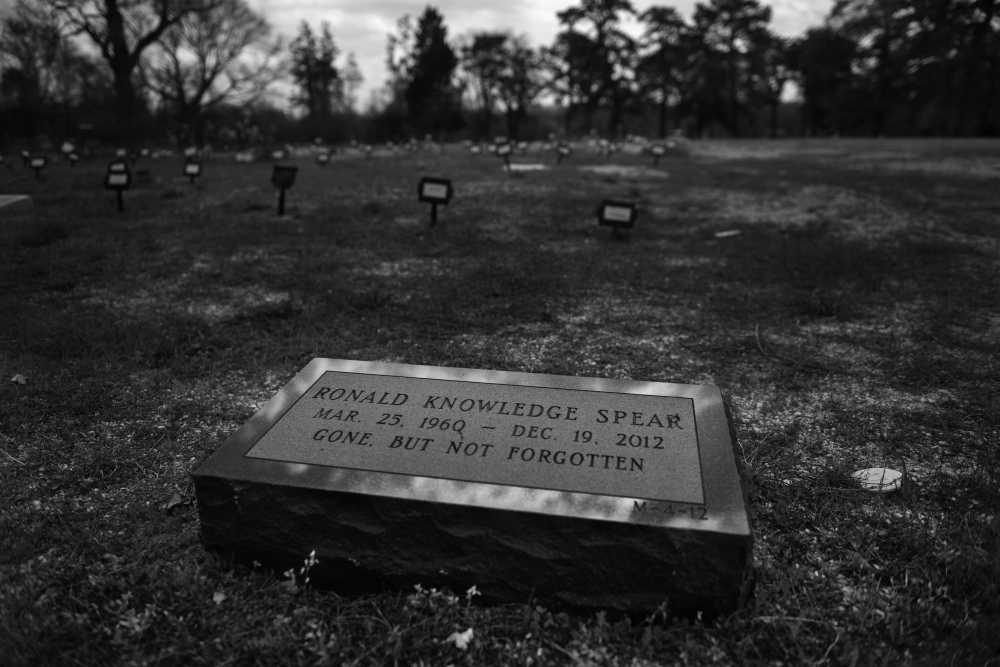 15 of 26 © 2021 Tomas Mantilla
Ronald's Spear  was brutally beaten up to death inside Rikers Island by a correctional officer while two restrained him. They later tried to cover up the incident and were found guilty on charges related to his murder. April 26th, 2016. 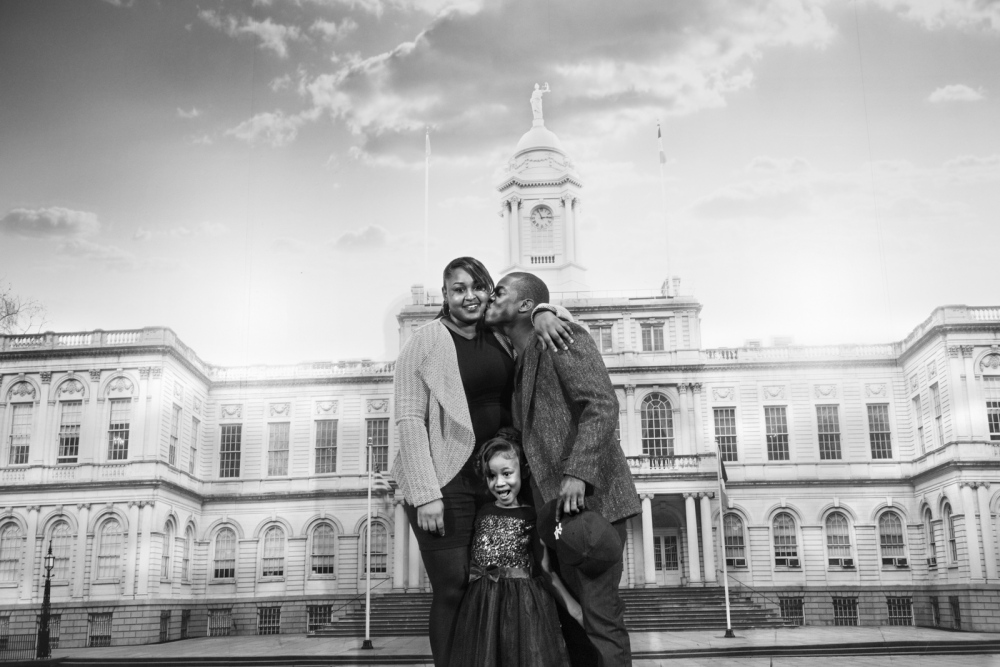 16 of 26 © 2021 Tomas Mantilla
Carl, his soon to be wife "Cookie" and her daughter pose for a portrait at New York City Marriage Bureau. 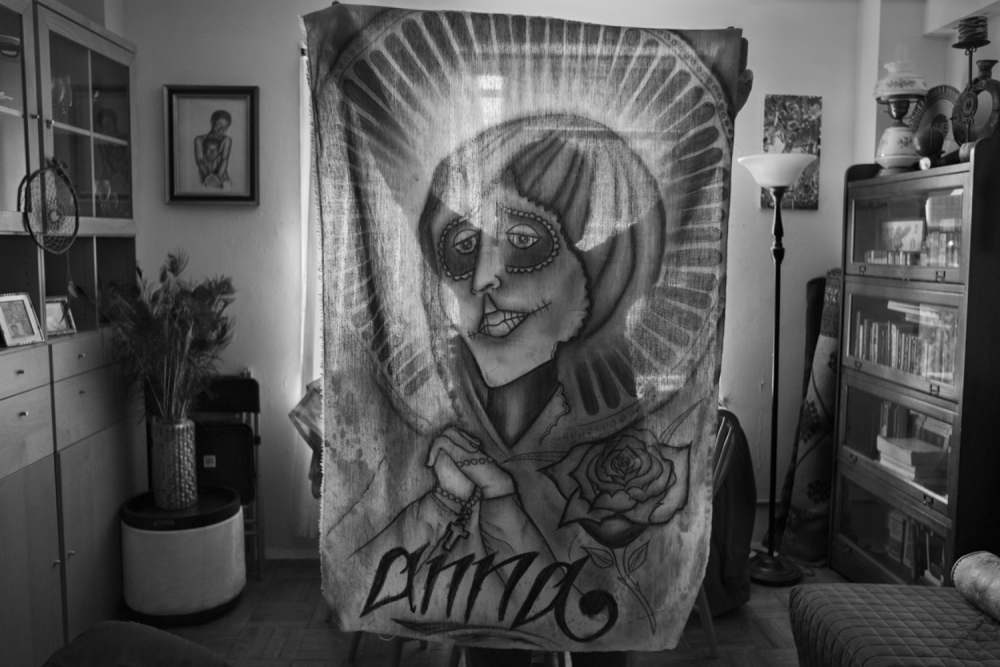 17 of 26 © 2021 Tomas Mantilla
Anna Pastoressa posses in front of one of her son's drawings. Her son Jairo was at Rikers Island for six years without being found guilty. While at Rikers and as a gift for mothers day, he painted the drawing Ana is holding on a jail bed sheet with vegetable pigments and other elements he had access to. Inmates don't have access to colors pencils. May 12th, 2016. 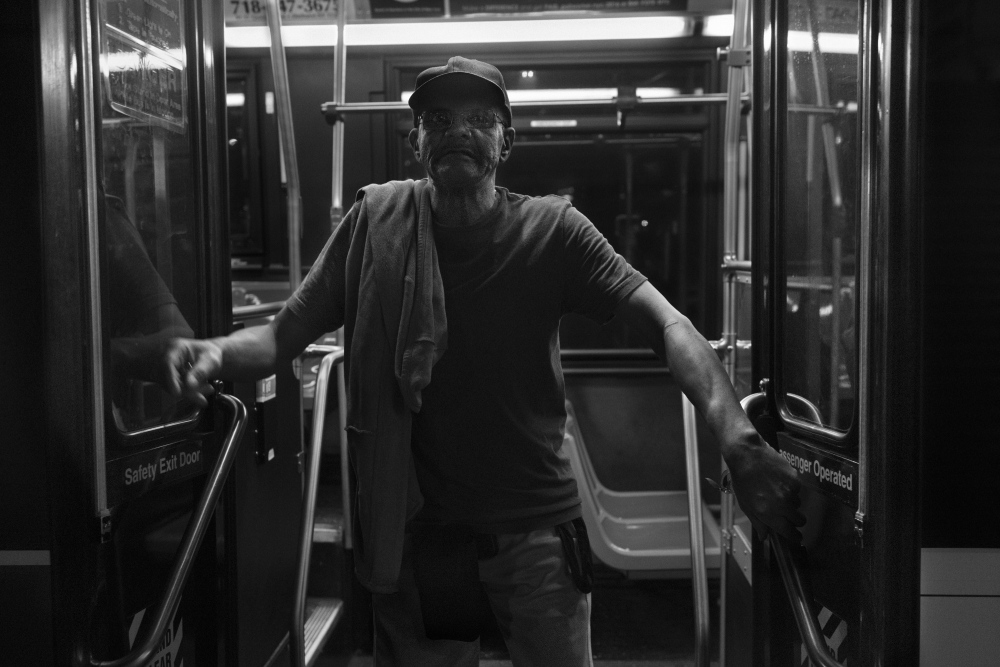 18 of 26 © 2021 Tomas Mantilla
Alvin Jeffires, 65, gets off the Q100 bus on the night of his release from Rikers Island after trying to recover his property. A Vietnam veteran, Alvin retired in New York after the war and lived from his army pension until one day he was wrongfully arrested after being mistakenly arrested by the NYPD. August 18th, 2016. 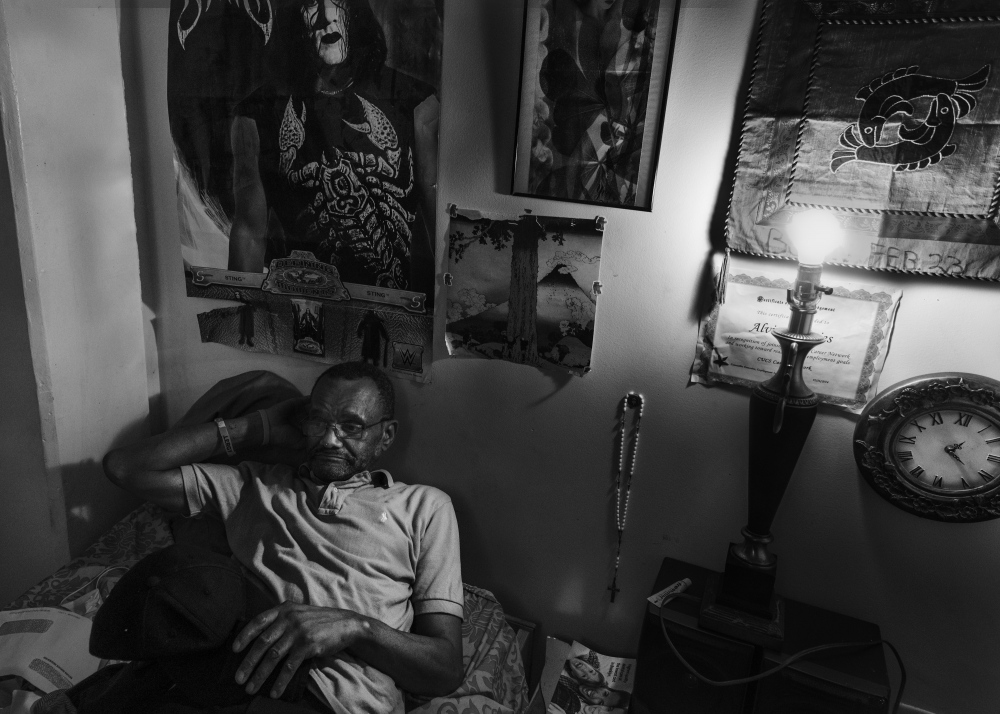 19 of 26 © 2021 Tomas Mantilla
Alvin watches TV at his apartment in Downtown Brooklyn days after being released from Rikers Island. All the charges were dropped when CCTV footage demonstrated Alvin was Innocent. He is currently in the process of suing the city for wrongful arrest and false imprisonment. Alvin said, "I never bothered nobody in my life, I don't look for trouble, I'm not violent, only in the war because I had to... not even a transit ticket, clean". August 18th, 2016 August 25th, 2016 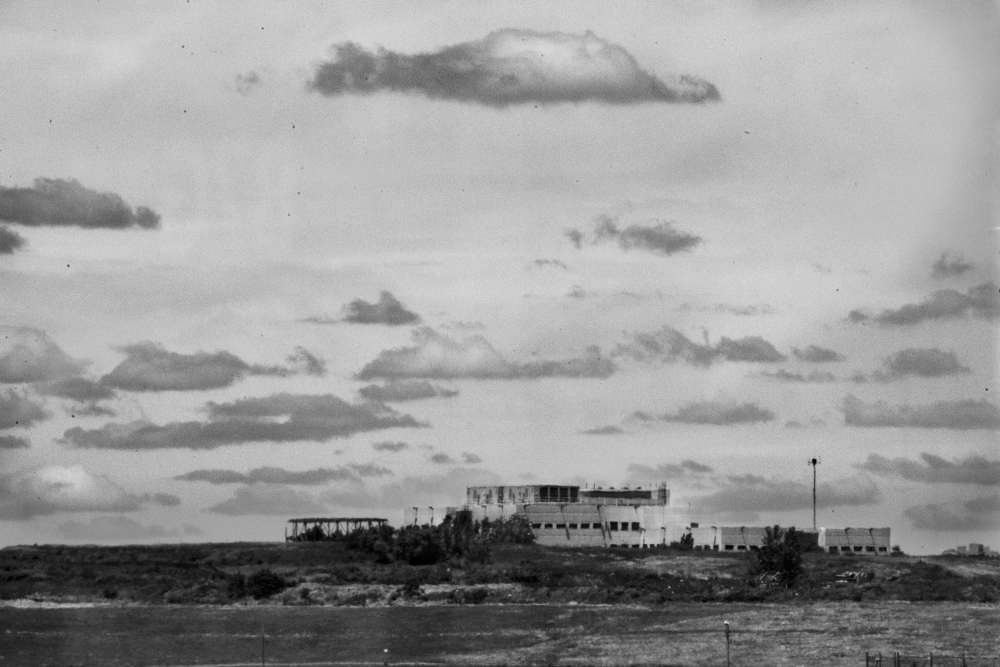 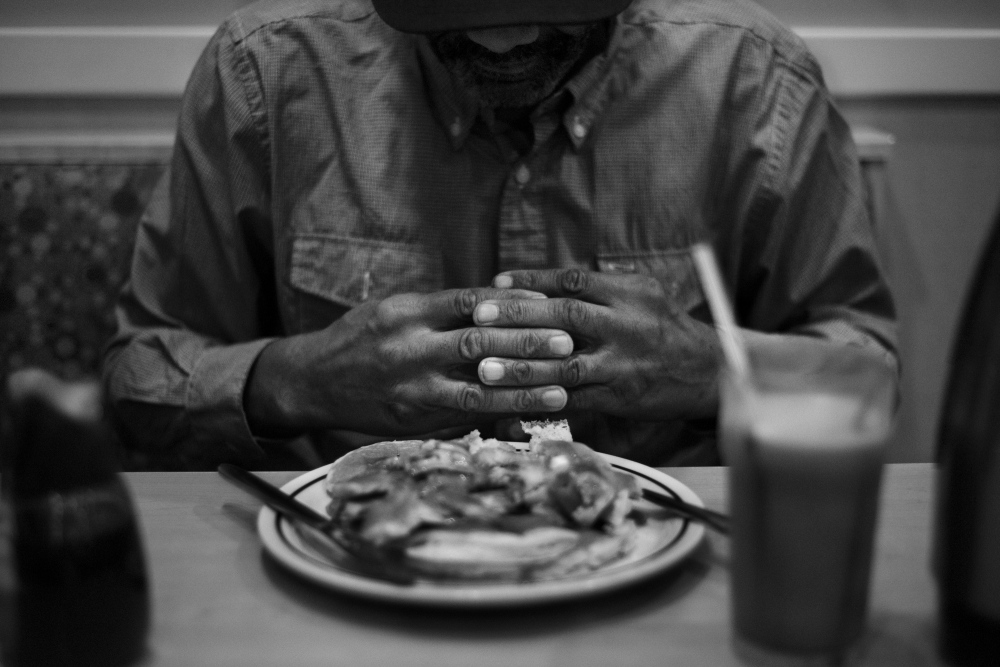 21 of 26 © 2021 Tomas Mantilla
After various days without eating, Alvin prays in front of his breakfast on a restaurant near his home in downtown Brooklyn, because of his imprisonment he lost his VA benefits. September 7th 2016. 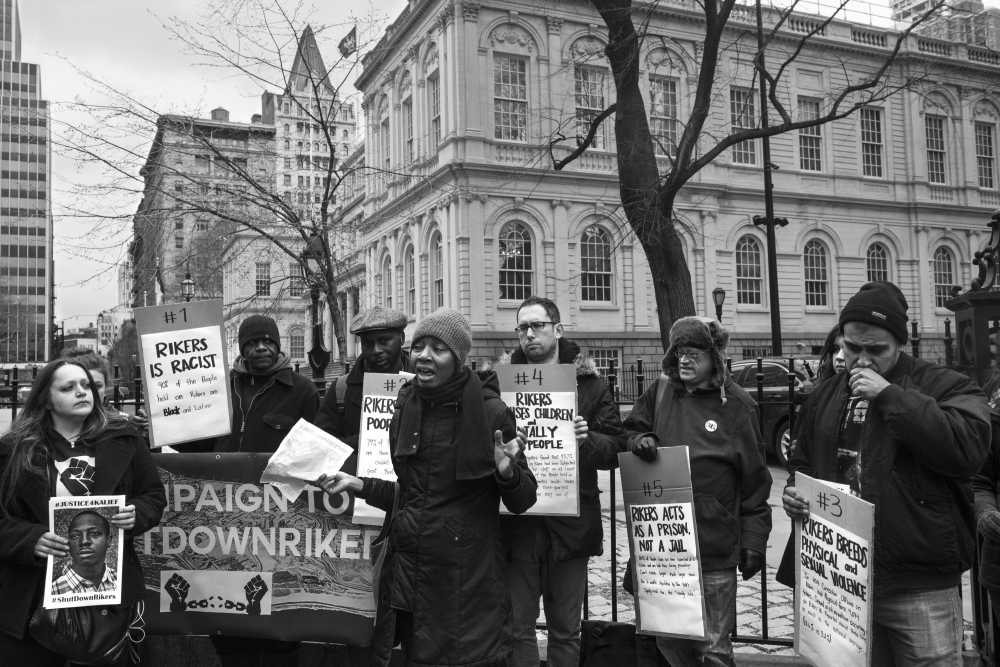 22 of 26 © 2021 Tomas Mantilla
An attendee speaks at a rally to protest the death of Kalief Browder in front of City Hall. Kalief was arrested for allegedly stealing a bag-pack when he was sixteen years old and sent to Rikers. He spent three years inside, two of them in solitary confinement. His trial kept being postponed and he refused to take a plea deal maintaining his innocence. After being released and the charges dismissed his took his own life on June 6th 2015. 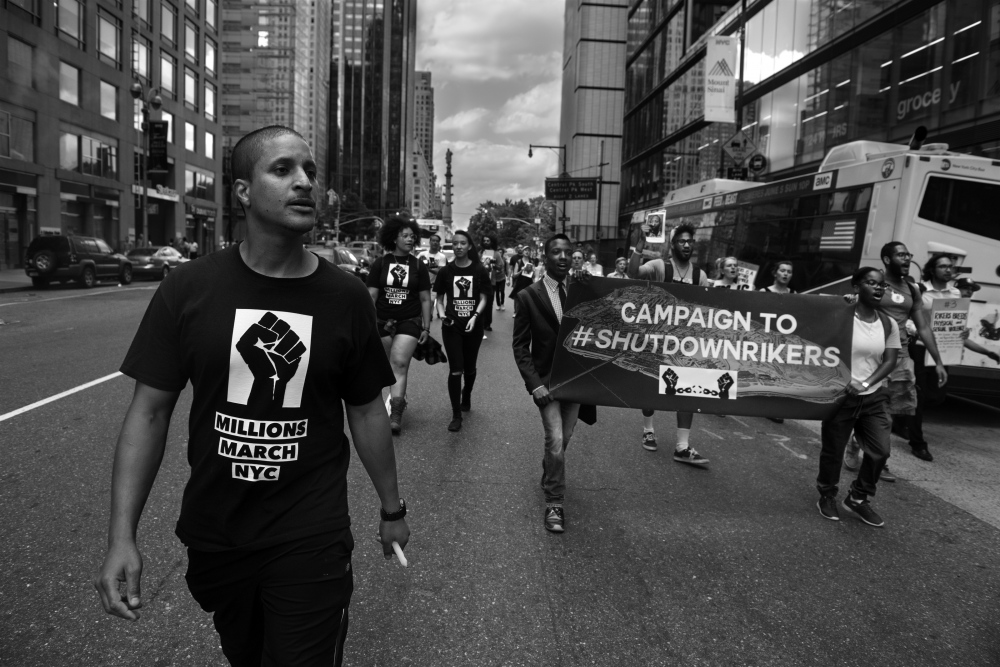 23 of 26 © 2021 Tomas Mantilla
Akeem Browder and members of the Campaign to #ShutDownRikers walk down sixth avenue on the day of the first anniversary of the death of Kalief Browder, Akeem's brother.  June 6th, 2016. 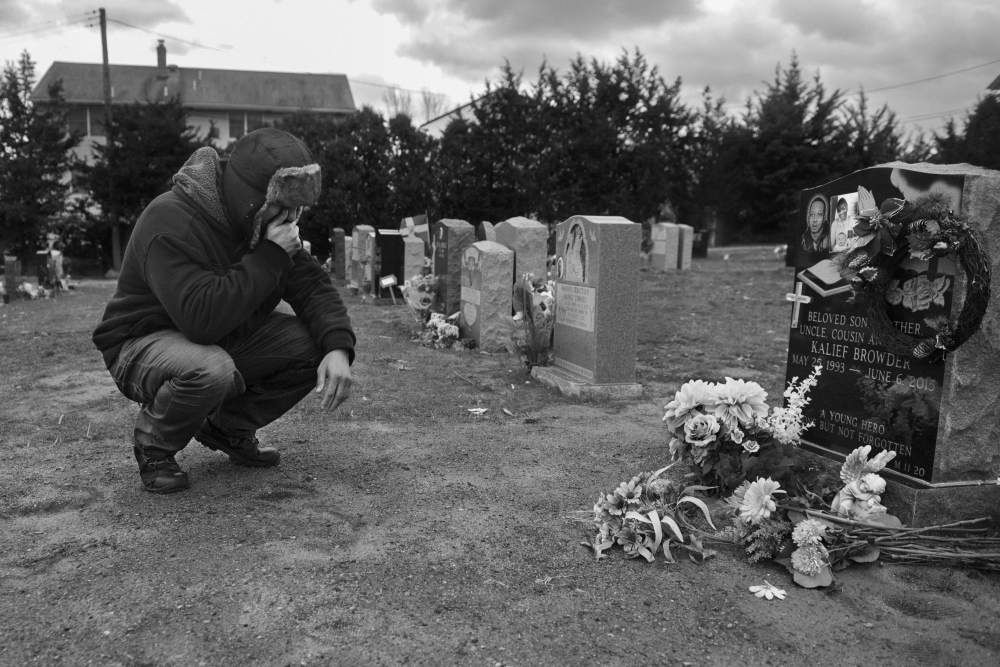 24 of 26 © 2021 Tomas Mantilla
Akeem Browder visits the grave of his brother Kalief and of his mother, Venida Browder, who died on October 14th 2016 from a heart attack. Venida was emotionally devasted after Kalief took his own life. She championed the cause of reforming the criminal justice system and made her case known nationwide after asking answers in several tv shows and criminal justice forums. 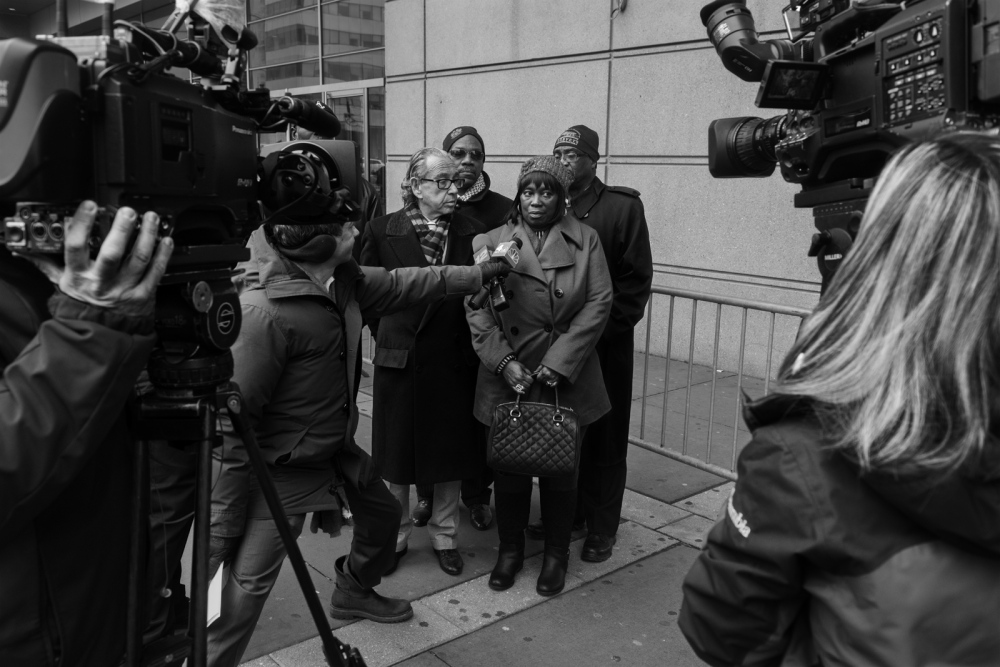 Margaret Burton, the mother of Jahmal Lighfoot, a former member of the Bloods, who was brutally beaten up by Correctional Officers in 2012, is interviewed outside the Bronx Criminal Court on February 17. Her son suffered several injuries and had his nose and eyes sockets broken after the security chief at the time, Eliseo Perez, ordered correctional officers to assault him. He and five other CO's were convicted on June 6th of the same year. February 17th, 2016 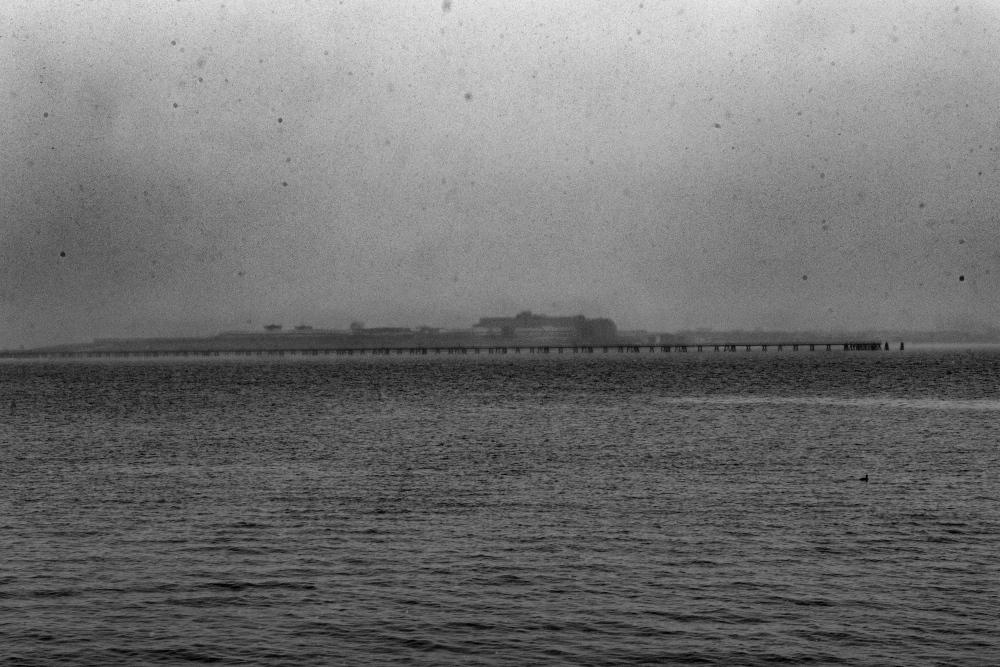 26 of 26 © 2021 Tomas Mantilla
Rikers Island as seen from College Point in Queens. The island is out of sight out of mind  for many New Yorkers who are unaware of current human rights abuses inside the jail. Political talk about shutting it down has being around for decades. After several political figures as Mayor Bill De Blasio, Governor Andrew Cuomo, and the City Council Speaker, Mark Viverito, have had to face the ongoing institutional crisis of the jail, the idea of closing the island became a reality and Rikers its schedule to shutter in 2026. February 15th, 2016.
Public Story
- Rikers Island: Out of Sight Out of Mind
Copyright tomas mantilla 2021
Date of Work 02/01/16 - 12/15/16
Updated 04/02/18
Location United States, New York, New York
Archived as Activism, Black and White, Candid, Civil Rights, Crime, Criminal Justice System, Discrimination, Documentary, Incarceration, Isolation, Personal, Photography, Photojournalism, Politics, Prison, Protests, Racism, Street, Workers' Rights

Rikers Island is the second largest jail complex in the U.S, and is located in the East River next to La Guardia Airport. With 413 acres, ten jails, and a clear overrepresentation of New York City's Black and Latino communities, Rikers Island holds around eight thousand detainees on any given day. Eighty-five percent of them have not been convicted and are kept inside while waiting for trial, often for several months just because they can't afford to post bail.

Since it opened in 1935 a deep-seated culture of violence has persisted inside the jail and countless of under-reported human rights abuses have occurred with impunity. By 2016 Rikers has become a symbol of the flawed criminal justice system where money pushes the poor into prison and people prefer to take plea deals instead of fighting their cases in court because in many cases it could easily take longer than the sentence they are offered.

"Rikers Island: Out of Sight, Out of Mind" explores how Rikers Island has affected the life of different individuals, sharing their stories and experiences. This project intends to create awareness about the importance of a long neglected issue and to re-humanize a population that has been forgotten by the media, politicians and the general public.