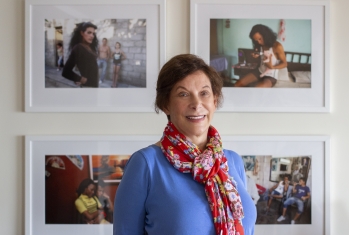 Although I expected to devote my professional life to painting, after receiving an MFA from the University of Pennsylvania, I took a class in photography with Harold Feinstein. The experience was exhilarating: It felt as if I were given... read on
www.mariettepathyallen.com
About

Although I expected to devote my professional life to painting, after receiving an MFA from the University of Pennsylvania, I took a class in photography with Harold Feinstein. The experience was exhilarating: It felt as if I were given a passport into the world. In what seemed like no time, I was hired by the State Museum of New Jersey to capture "The Face of New Jersey". The Philadelphia and NJ photographs, taken in 1968, represent my earliest work, followed by "People With Art," an ongoing series about people making art, people in juxtaposition to art or kitsch, people in art spaces, or even, people as art.

In 1978, I was in New Orleans for Mardi Gras. By fluke, I stayed at the same hotel as a group of crossdressers. They invited me to join them for breakfast on the last morning. When I took a group picture, I was moved by the experience of looking into the eyes of one of the people in the group: I felt as if I was looking at the essence of a human being rather than a man or a woman. From 1978 through the '80s, I photographed and interviewed male-to-female crossdressers with their families, culminating in the publication of "Transformations: Crossdressers and Those Who Love Them", and an exhibition at the Simon Lowinsky Gallery in 1990.

In the '90s, I expanded my work to focus on female-to-male and male-to-female people who live in the gender in which they identify. My second book "The Gender Frontier" is a collection of photographs, interviews, and essays covering political activism, youth, and the range of people that identify as transgender in mainland USA. The photographs were taken between 1992 and 2003 and were published by Kehrer, Heidelberg, Germany. “The Gender Frontier” won the 2004 Lambda Literary Award in the Transgender/Genderqueer category.

Since the publication of “The Gender Frontier”, I have continued my work with gender variance, both in the US and abroad. “TransCuba has just been published. I anticipate following this publication with new images taken in Mexico, French Polynesia, Myanmar, and Thailand, in collaboration with professor Eli Coleman, at the University of Minnesota. Along with my focus on gender variance, I have enjoyed playing with flowers and creating fantasies; both of these series relate to my background as a painter. “Scapes”, a new series, deals with color, space, and cultural juxtapositions such as east and west, old and new, handmade and manufactured. I see this series as related to painting and collage as well.

Along with exhibitions and books, I give slide presentations on gender issues and consult for documentary films. In 1998 I worked with Kate Davis and David Heilbroner on a film for A&E television: "The Transgender Revolution". It was the first documentary to emphasize political issues along with personal stories. It was nominated for a GLAAD media award.

"Southern Comfort", Kate Davis's next film, for which I was the consultant and still photographer, won the 2001 Sundance Film Festival Grand Prize in documentary film. It documents the last year in the life of Robert Eads, a female-to-male transsexual who was dying of ovarian cancer. "The Gender Frontier" includes images taken over many years of the people featured in "Southern Comfort".

My work is in a number of collections, both private and institutional, and has been exhibited internationally.