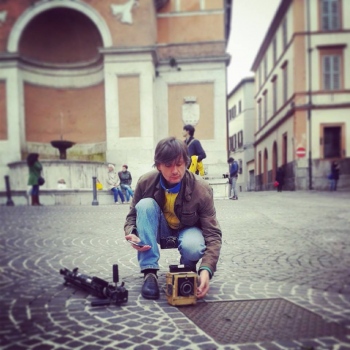 Photographer / Based in rome

I can not express well my thoughts with words, often are people who know me or they see my pictures that focus better than I can share my way of relating to photography and in particular to the pinhole. As my former professor Riccardo Pieroni which is my mentor, that for the photographic exhibition "amo - eh! - a che pensi? - a niente!" at the Bibli library wrote these words very beautiful and revealing.

"Luca is a man of few words ...I mean to say that he thinks very much!
He chose to photograph with the pinhole on a apparatus handmade: a picture of meditation. Long time. The light (radiation, energy) slowly comes to rest on the sensitive material and, simultaneously, is stratified into the consciousness of the photographer: it is a particular form of knowledge that aims at a depth of things, the essence.
Â It is not easy to describe the feeling you get working with the pinhole. This is a photograph of "natural" and, together, very "technical". Luca is a maker: cameras come out of his hands. He is an experimentalist: all lighting conditions, color, shape requires a modification of the process. He is a traveler:he bring with himself his strange equipment and sees what others can not see. He is an artist: the most basic construction techniques and "light" is associated to the technological magic of photography "immediate" (Polaroid, Fuji) and he establish a working method that accepts the unexpected as part of research. The computer intervenes in the end, paradoxically, with the purpose of giving "materiality" to a process that is more ethereal, evanescent. "

For this exhibition, Luca decided to associate the images of his trips to the words: quotations. These are the thoughts that during the long periods of waiting for the photo "may become" while on the move, while the realization of the photographic process, and miraculously come to mind we find crystallized in the thoughts of others, in words flying (from books, movies ...) that meet our unspoken thoughts and fall on a sheet in its final form and perfect. Let's face it: we photographers do not accept willingly the indeterminacy of the meaning of our photographs. We would love to think that the observer and as we saw, that re-know what we have known. But it is not this that serve the photographs. From each image begins a new creative path, all the observer, that we can not control or contain. We can only direct, limit, suggesting hoping for a possible meeting between ... thoughts flying.

Or as Romano Sansone section of IL ROSSO E IL NERO on Nadir Magazine Web reviewed so my photo gallery, and in particular the photo on Niagara Falls. "When we present well-founded opinion take it for granted that this may not be shared, but we can expect that any differences of opinion remain on the objective of the topic. Things get ugly when, contrary to what common sense would suggest, we have to express ourselves from our incompetence, as in the case of portfolio Luca Baldassari, realized through the pinhole and that we can not pass over in silence, because the community of practitioners of this technique will practice a sort ascesis, renouncing the luxuries and comfort of megapixels, the lenses prestigious and automatic, but takes its place rightfully in the world of photography. The problem is to understand each other. because, conditioned by years of research in visual quality of the image, try to prune photos from those who would defect for us to see with the mind's eye the content as it would be if we had made â€‹â€‹us that picture. You can see it in the picture, one of the ten sent, I have chosen to comment and I'll end up not to comment at all: it is closer than any other to what I did with my means, and it is a fundamental mistake, because the content and appearance can not be separated, a pinhole picture is viewed through the eyes of who lived the process of his birth, as we value more or less consciously, our pictures by the resources and the process that generated them. We look at the entire portfolio under the heading Personal Galleries and let us be guided by the indications that gives us the author. There is the case that we learn to see the world as "they see it."

As Denis Curti Director of contrast as on the website to which I sent my pictures for the reading of portfolio thus comments on my work  "Luca Baldassari"  I carefully observed all his pictures and I found in all of them the constantÂ  tendency of his gaze to move towards open spaces, marine horizons and clear skies.Â  Even when his shots are made on board a ship, what catches the attention is the ability to capture the landscape in dreamy and soft, strong communicative intensity. Adopting the language of photography is also functional in the yield "poetic" soft focus effect, the use of black and white and the internal movements of his images lead us to lost in dream landscapes and unreal. I wish he could explore the theme of landscape, focusing on the reading of artists who, like Franco Fontana, have favored this photographic genre and taking in the abstract elements in  virtue of a selective vision of reality. "