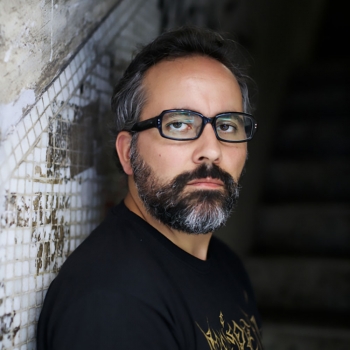 His closest family has no artistic tradition. Thus can it be justified that he only truly came into the world of photography by the age of 18. He knows many Portuguese photographers of the most diverse fields and continues to learn with them. After four years studying Geological Engineering, he reached the conclusion that his interests were elsewhere and enrolled in the Communication Sciences degree, Journalism variant, in the Universidade Autónoma de Lisboa - a degree he completed in 2005.

He started working in the field of photography in 2000 and, two years later, initiated his professional internship in the now extinct news agency Intermeios. For six years, he was part of the permanent staff at the A Bola newspaper. After that, he collaborated with various Portuguese and foreign publications, including the I, Público, Correio da Manhã, O Comércio do Porto, Expresso, Washington Post, BBC, The Guardian, among many others. He also carried out photographic works for various companies. Between 2004 and 2010 he was, in Portugal, the official photographer of the Brazilian singer Daniela Mercury.

Having arrived in Macau, he joined the Hoje Macau newspaper, where he worked as writer and editor-in-charge between 2010 and 2014. He was photography director of Culture Guide and was the photography coordinator of Macau magazine, Portuguese version, between 2011 and 2021. He was also, between 2018 and 2021 multimedia journalist and editor at Plataforma Media project of the Global Media group. Nowadays, he is part of the editorial staff of Ponto Final newspaper as a photojournalist.