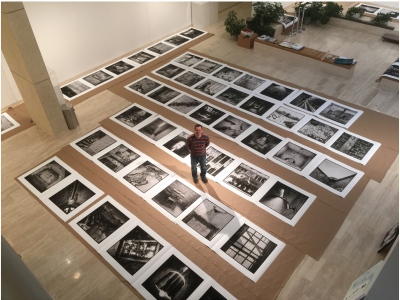 Eric T. Kunsman (b. 1975) was born and raised in Bethlehem, Pennsylvania. While in high school, he was heavily influenced by the death of the steel industry and its place in American history. The exposure to the work of Walker Evans... read on
Location: Rochester, NY
Focus: Publisher, Fine Art, Documentary, Photography, Teacher
| www.erickunsman.com | Subscribe to newsletter
About

Coverage Regions: USA & Canada
Languages Spoken: English, ASL
Years of experience: More than 10
Eric T. Kunsman (b. 1975) was born and raised in Bethlehem, Pennsylvania. While in high school, he was heavily influenced by the death of the steel industry and its place in American history. The exposure to the work of Walker Evans during this time hooked Eric onto photography. Eric had the privilege to study under Lou Draper, who became Eric’s most formative mentor. He credits Lou with influencing his approach as an educator, photographer, and contributing human being.

Currently, he is a photographer and book artist based out of Rochester, New York. Eric works at the Rochester Institute of Technology (RIT) as a Lecturer for the Visual Communications Studies Department at the National Technical Institute for the Deaf and is an adjunct professor for the School of Photographic Arts & Sciences.

In addition to lectures, he provides workshops on topics including his artistic practice, digital printing, and digital workflow processes. He also provides industry seminars for the highly regarded Printing Applications Lab at RIT. His photographs and books are exhibited internationally and are in several collections. He currently owns Booksmart Studio, which is a fine art digital printing studio, specializing in numerous techniques and services for photographers and book artists on a collaborative basis.

Eric holds his MFA in Book Arts/Printmaking from The University of the Arts in Philadelphia and holds an MS in Electronic Publishing/Graphic Arts Media, BS in Biomedical Photography, BFA in Fine Art photography all from the Rochester Institute of Technology in Rochester, New York.

There's no “given,” formula for what demands Eric’s focus as a photographer. Eric is as drawn to the landscapes and neglected towns of the American southwest as he is to the tensions of struggling rustbelt cities in the U.S. northeast. Always Eric is attracted to objects left behind, especially those that hint at a unique human narrative, a story waiting to be told. Eric’s current work explores one of those relics: working payphones hidden in plain sight throughout the neighborhood near his studio in Rochester, NY. Associates suggested they signified a high crime area. This project's shown Eric something very different.