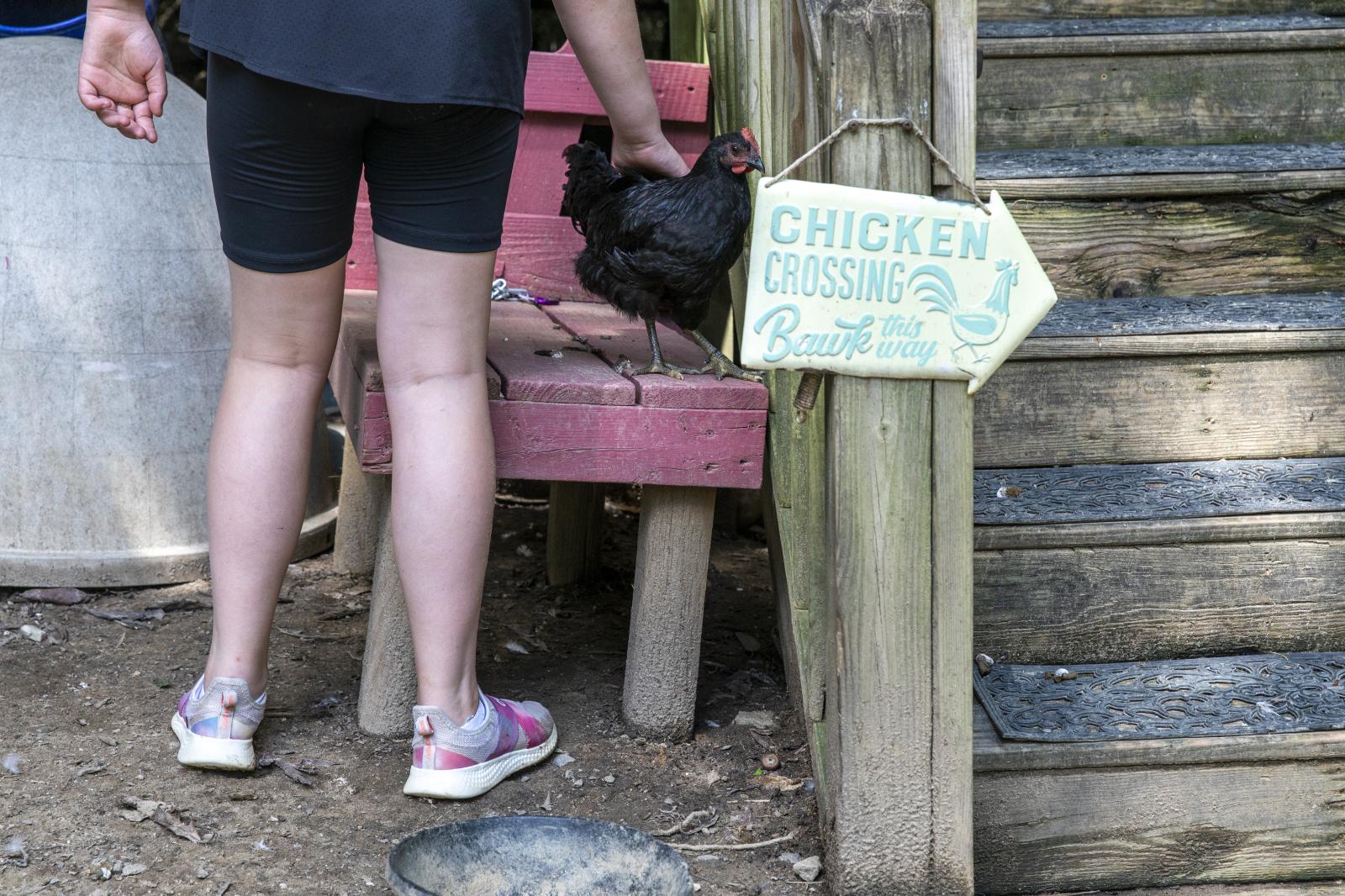 1 of 17 © 2023 Katie Linsky Shaw
(This is the second post in an ongoing photo project about the Youth Mental Health Crisis. Please follow along at https://youthmentalhealthcrisis.visura.co.)
Early Intervention and the "Relationship Chicken"

Helping a child with mental health issues can be scary and intimidating when little is known about the resources available. Families often assume the only help is a one-hour, weekly visit with a local therapist. But even that can be hard to find with lengthy wait times for new patients.

“Families who struggle feel isolated and often at a loss to help their children,” said Maggie Weaver (name change for privacy reasons) whose 12-year-old daughter has Obsessive Compulsive Disorder that developed at an early age. “Many providers aren’t aware or don’t share alternative options other than hospitalization. We wish we’d known earlier.”

Early intervention through programs like wilderness therapy and therapeutic boarding schools can help reduce hospital admissions for mental health issues and shorten the stay at intensive residential programs. But finding help when a young child is suffering is difficult if you’re unfamiliar with the mental health community. And schools, who should be well-versed in recommending help outside the classroom, are failing those families.

Weaver’s daughter started struggling with OCD in the fourth grade. (OCD is a disorder in which people have recurring, unwanted thoughts, ideas or obsessions which often lead them to do something repetitively to relieve that anxiety.)  The disorder became overwhelming when her daughter was afraid to leave the second floor of their home. Therapy, with an emphasis on “exposure therapy,” and medication helped her return to school where she did well until the Covid pandemic. Virtual school was difficult and the center where she received therapy stopped seeing patients.

When school returned to in-person, Weaver enrolled her daughter in a half-day private school program specializing in ADHD in addition to the public school. She started out doing well but by October of that year, her daughter was refusing to attend the public school due to bullying there which made it difficult to get her to continue at the private school which she loved. She also wouldn’t leave her bedroom. Weaver said her daughter put up “defensive, emotional walls” and resisted help from others.

“One person described it as having a flat tire and just unable to get going,” said Weaver. “She loved her outpatient therapist but outpatient sessions were not enough to support her.”

The family considered bi-weekly appointments but they knew it still wasn’t enough.

In January, they decided to send their daughter to a wilderness program for three months where she thrived. From there, she transitioned to Asheville Academy - a therapeutic boarding school outside Asheville, NC, focused on girls ages 10-14.

At wilderness therapy and Asheville Academy, her daughter started to grow and make positive changes. She learned to self-advocate, listen to other perspectives, and rediscovered she can do well academically. She also had the “rigid thinking” of her OCD challenged and learned coping skills to get through future OCD-related issues.

“We recognized that she was struggling and needed more help than she could get in an outpatient setting,” said Weaver adding that few therapists specialize in pediatric OCD and are difficult to find. “Once we tried everything that we could to keep her home, we acted relatively early so that she could gain the skills she needed to be better prepared for high school." 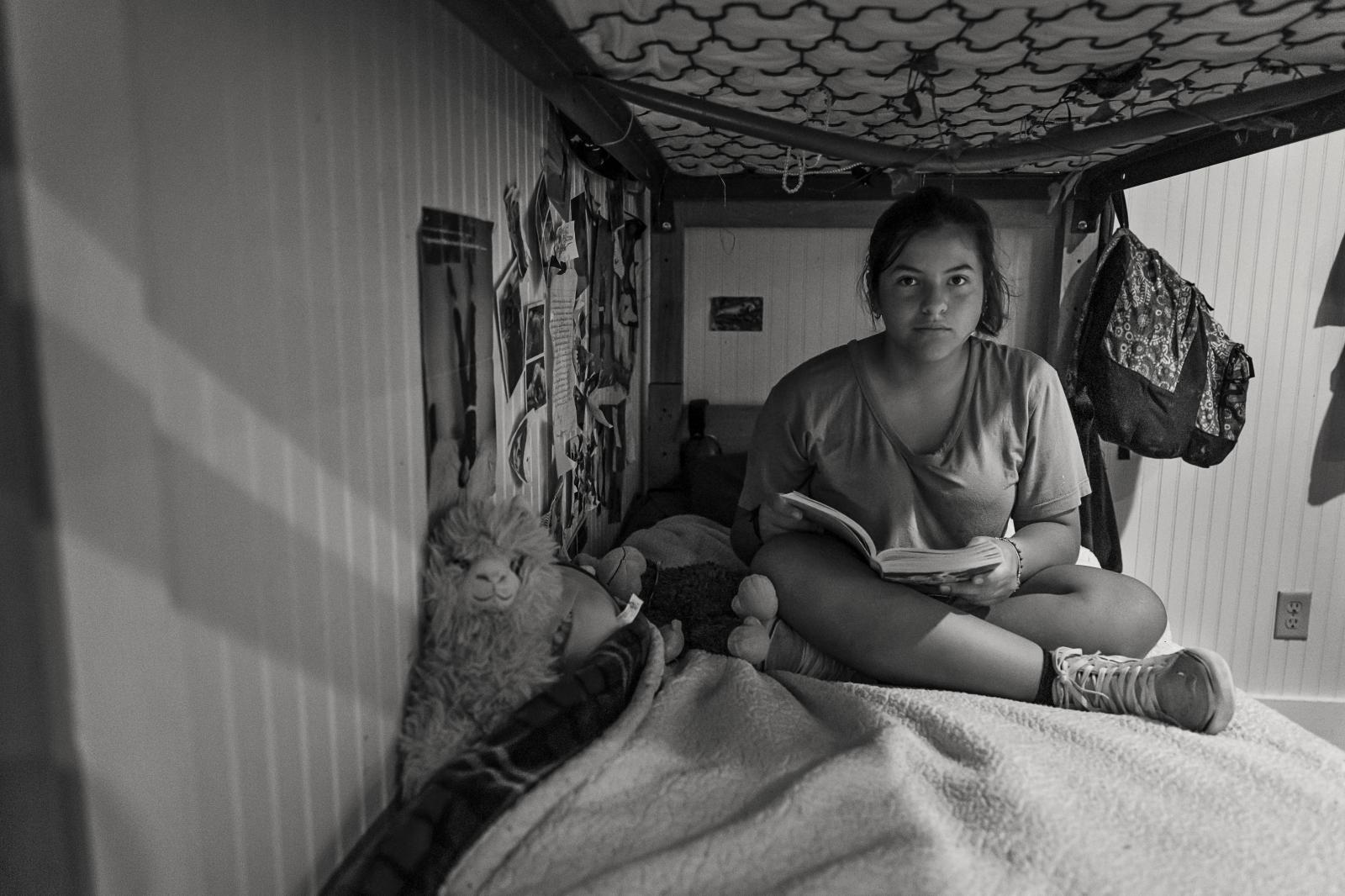 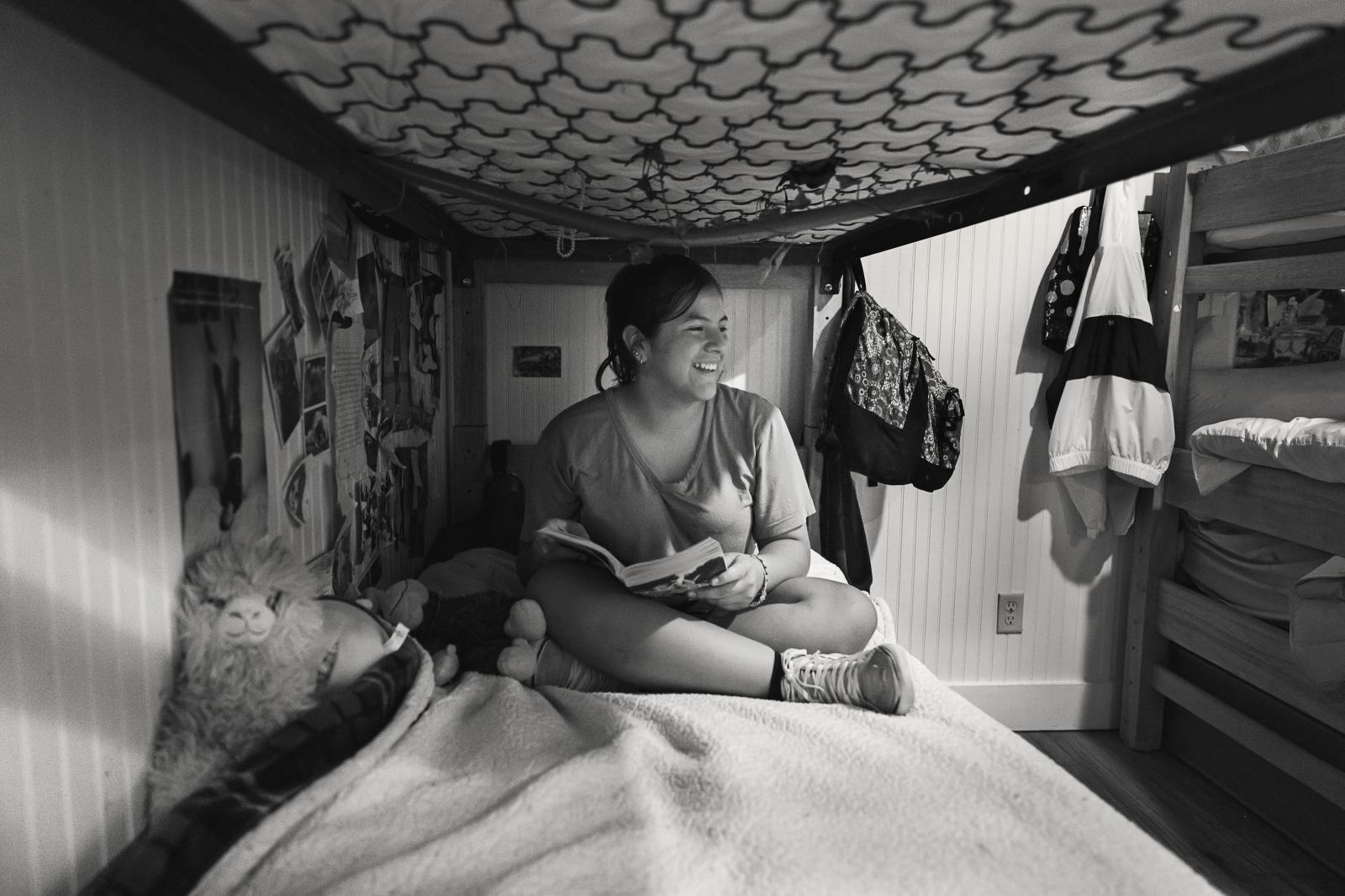 Cat Jennings, founder and executive director of Asheville Academy, said girls are more complicated at a younger age which is why early intervention is successful. To appeal to the girls, her school features an array of farm animals from horses for equine therapy to goats, chickens and rabbits. This often becomes the girls’ most memorable experience of their time at the school.

The animals are affectionately called “relationship chickens” or “relationship goats” (depending on the animal). The girls first meet and play with the animals then choose one to use in therapy. The method was successful with Weaver’s daughter who had a positive experience helping an anxious chick regulate using calming techniques. She named it Chirpy. 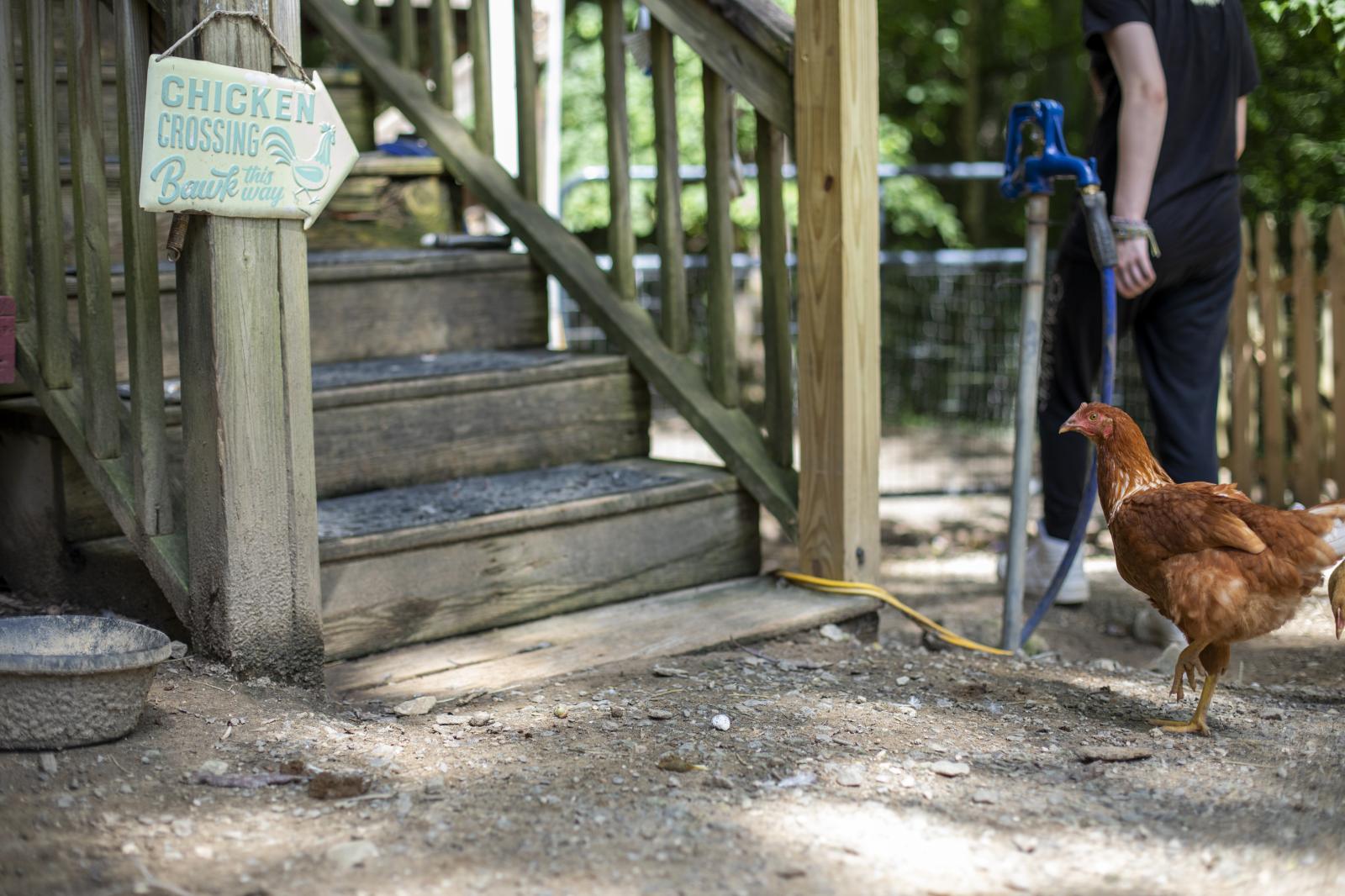 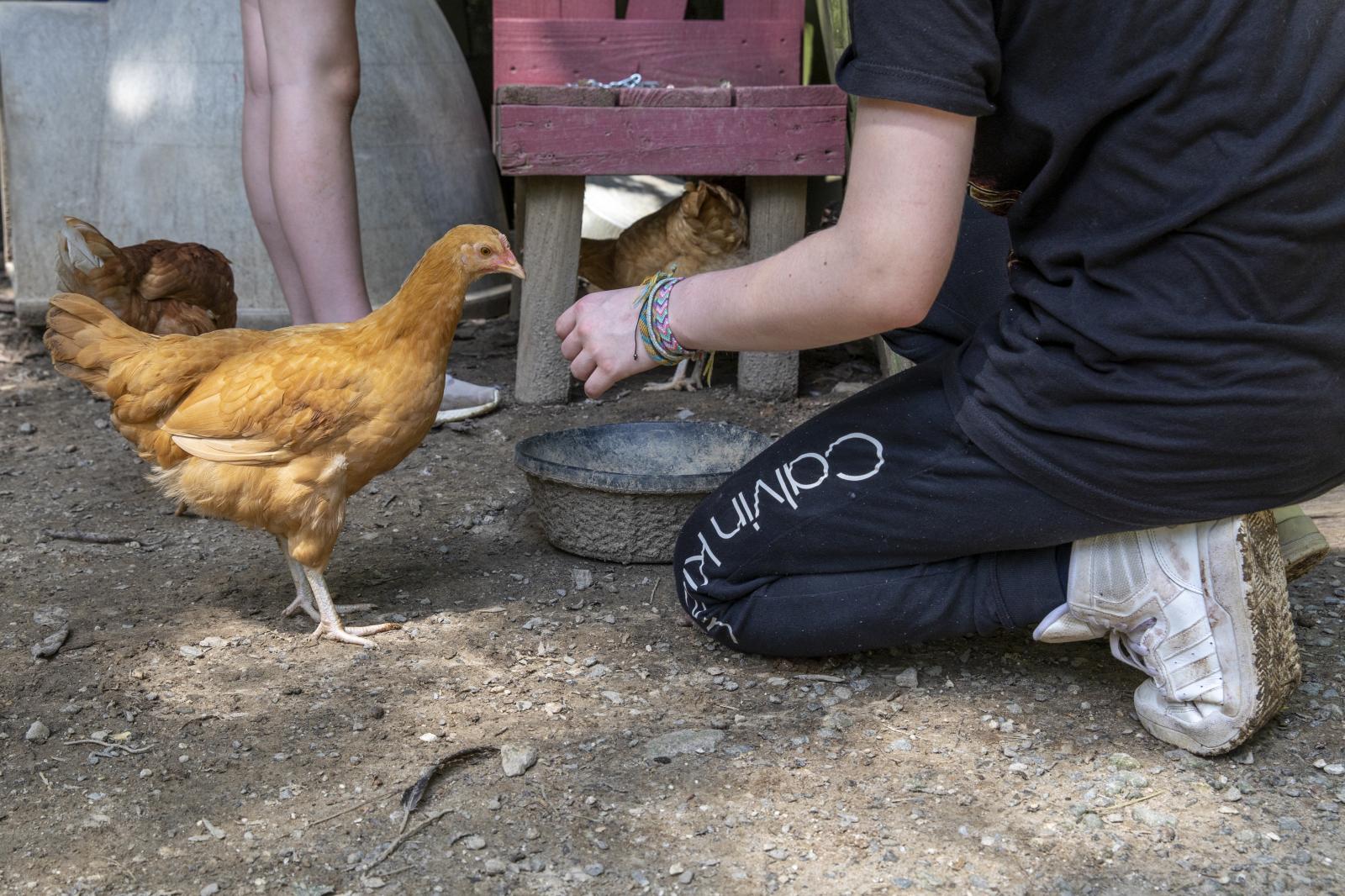 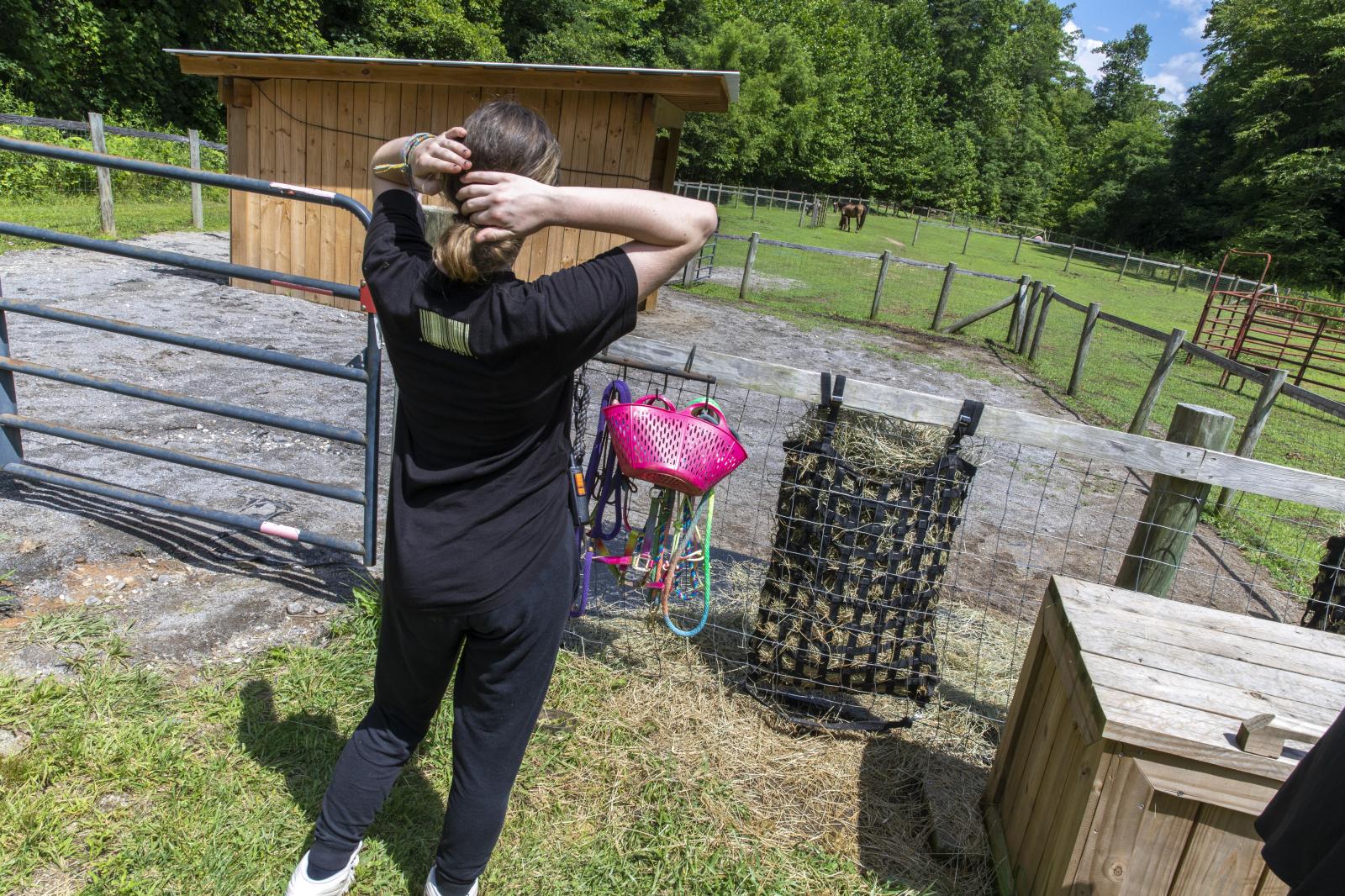 For Jennings, her experience working with children in a unique setting started 30 years ago when she ran a camp for kids with learning difficulties like ADHD. She said at the time, she was one of the only programs in Western North Carolina focused on learning challenges and mental health. Now, the area is crowded with programs from wilderness therapy to residential treatment centers, therapeutic boarding schools, and behavioral health centers.

Today, Asheville Academy covers issues like anxiety, depression, school refusal and bad choices while teaching girls a better understanding of their emotions and decision-making. The program also works with the entire family to help with healing and repair relationships. Jennings said some families live in chaos for years because they don’t know how to handle mental health situations and often make things worse when they’re trying to help.

“Families are traumatized because they want their kids to get better but sometimes, in their attempts to help, they inadvertently send the wrong message to their child due to stress and frustration,” said Jennings. “Unintentional consequences does not mean bad parenting.”

To help families reconnect, family members are invited to do the work with their child. The school has a full-time staff of 86 faculty members to serve 45 students. Families are supported by staff who help families transition back home once they leave Asheville Academy.

“These are really fragile kids and what they do after is important,” said Jennings, adding that the majority of girls do move back home to attend regular schools while some move on to traditional boarding schools. “Parents are brave enough now to intervene early.” 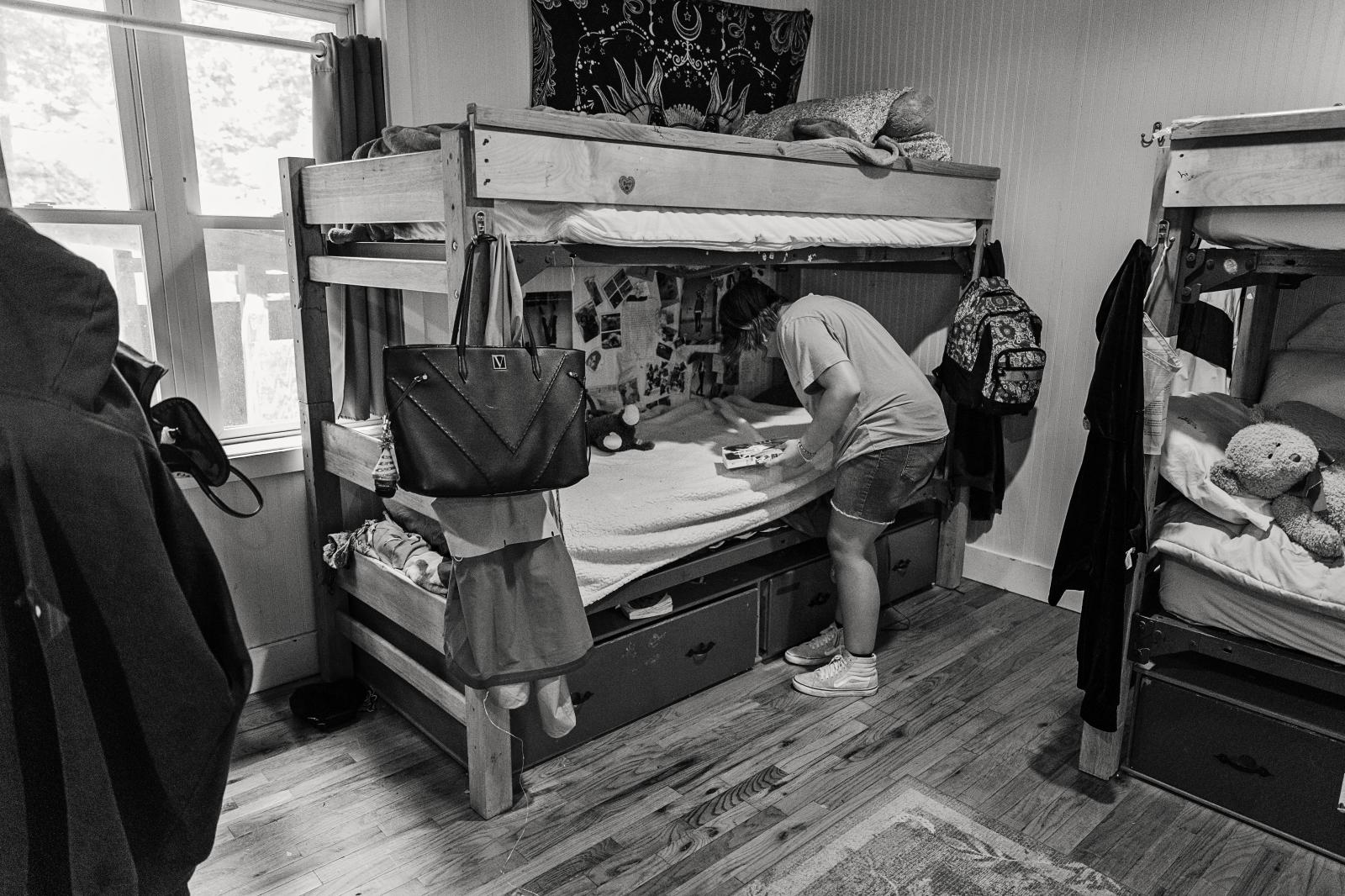 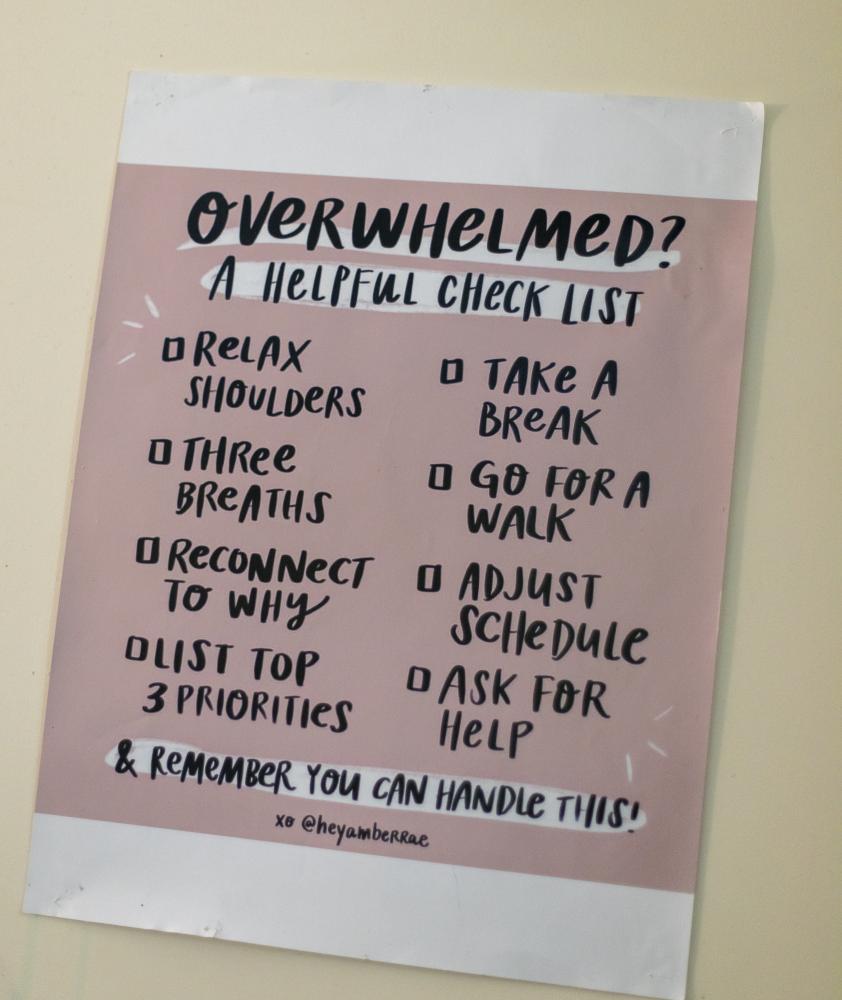 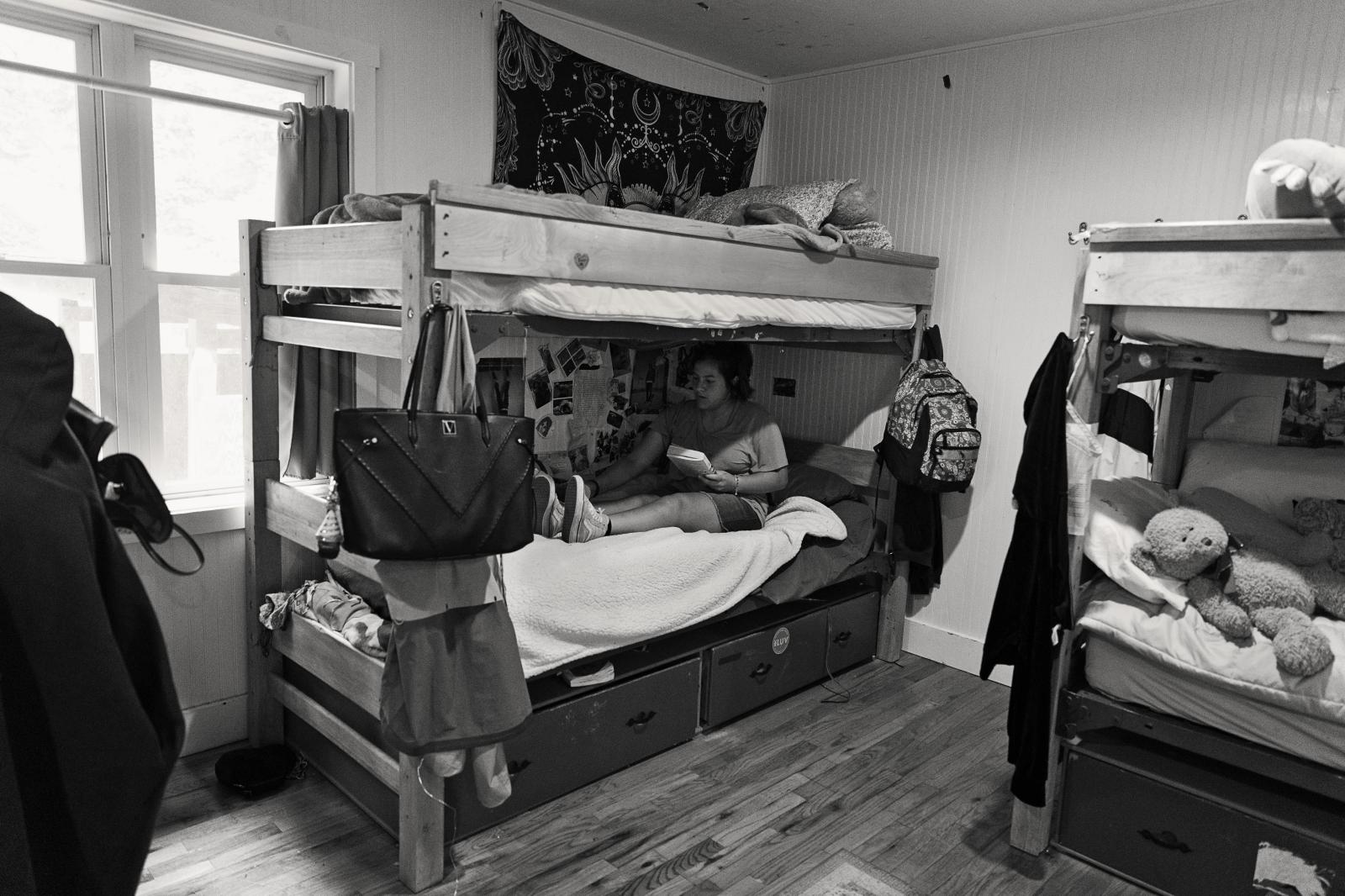 Weaver reiterated the need for early intervention and educating others about the help that’s available. She also wishes insurance companies would cover claims for mental illness like they do for physical health. Unequal insurance coverage for mental and physical health has long been a complaint by families seeking financial support. Insurance companies will deny mental health claims if they feel the treatment wasn’t medically necessary.

“Even though our family has two employment-based insurances, very little is covered and the coverage only lasts for a short period of time,” said Weaver. “Too much energy is spent trying to fight the insurance companies.”

Jennings understands the struggle and provides her families with super bills - an itemized list of all the services the girls receive including individual and group therapy sessions - for the families to submit to insurance companies. Programs like therapeutic boarding schools can easily run $12,000-$13,000 a month.

Families like the Weavers often face difficulties simply finding the right program for their child. And once the best placement is found, sometimes that program won't have space for a child.

“From the family perspective, there are not enough options and space is hard to get,” said Weaver. "Finding the right placement is hard. It requires a lot of research, and what I've learned from other families in similar situations is that many unpredictable variables simultaneously interact during treatment and this can influence whether a child makes positive changes. It's complicated."

To help with this time-consuming and stressful process, the Weavers hired an educational consultant (also known as an EC) who helps families in crisis find the right placement. They also spoke with admissions at the recommended programs, spoke with alumni families, searched online parent groups and did extensive research before deciding what was best. 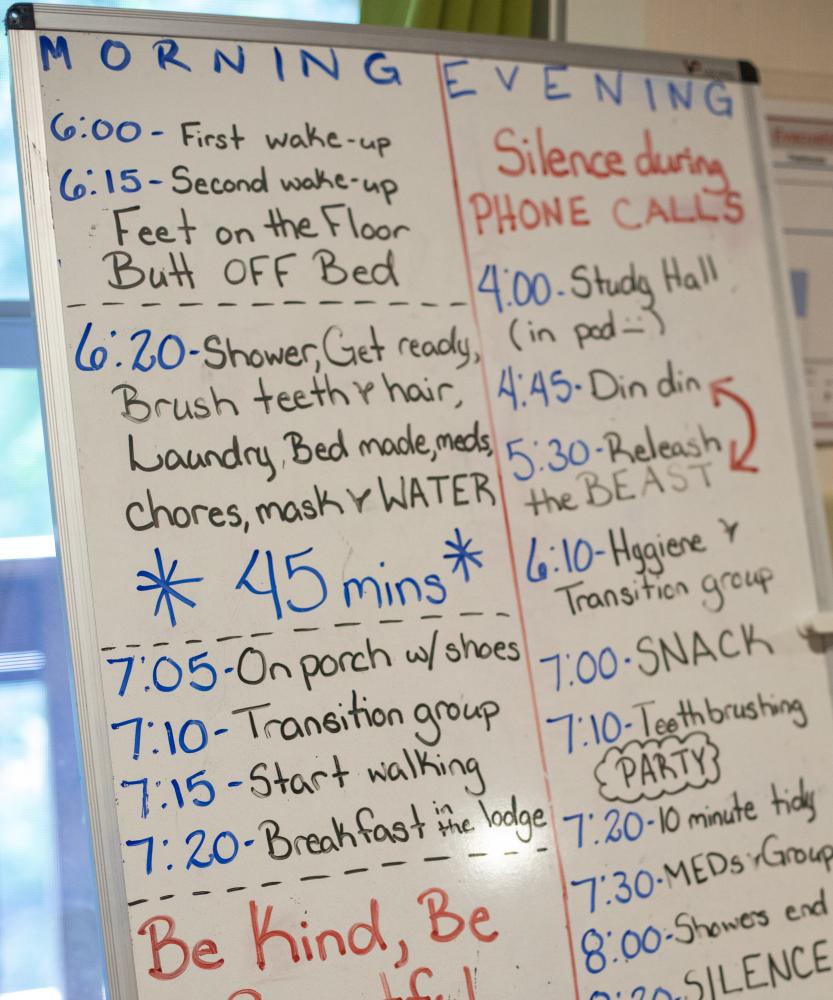 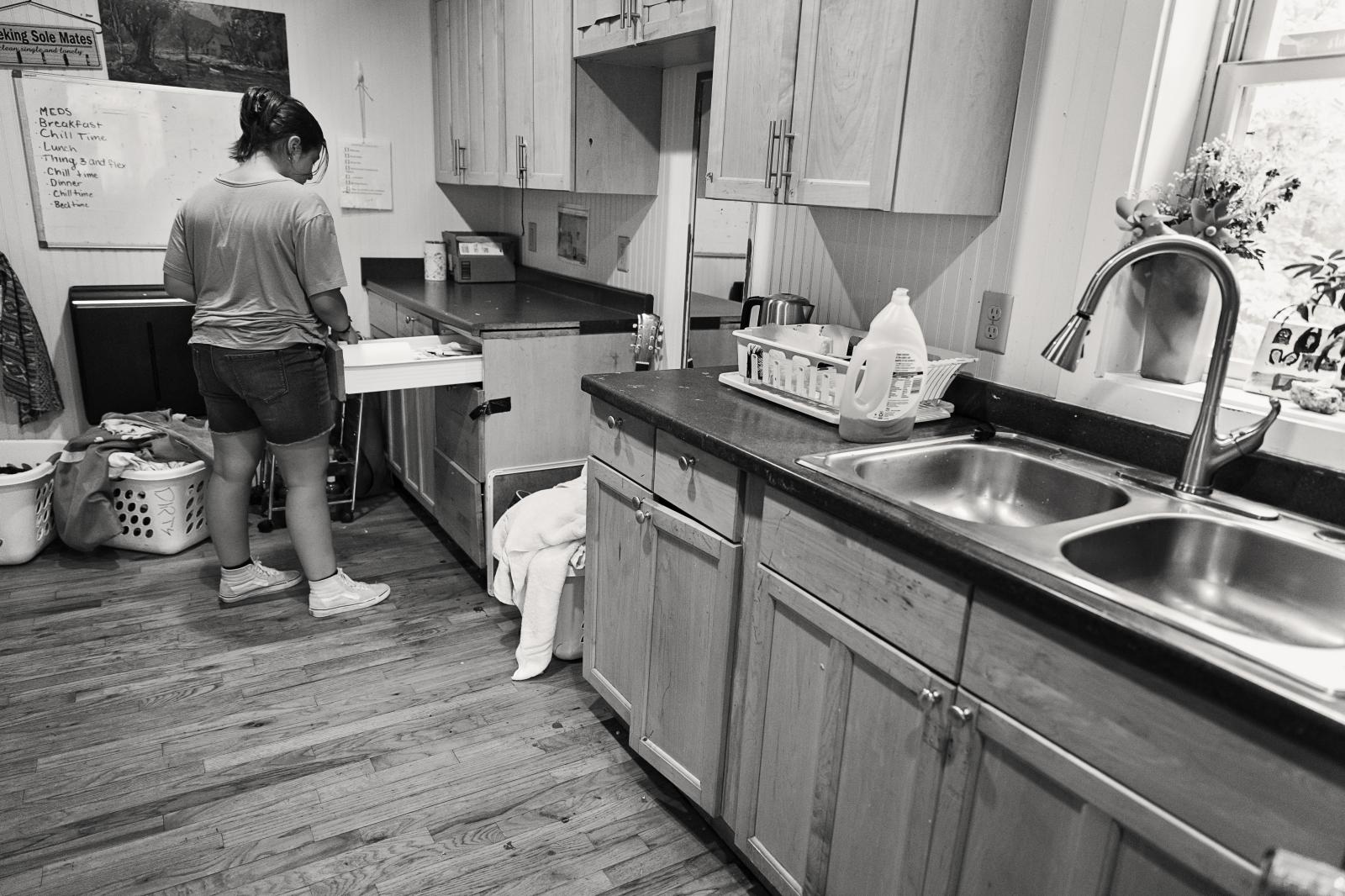 Despite the cost and frustrations, Weaver is thankful for the positive changes she’s seen in her daughter who now has the confidence to make good decisions and the coping skills to handle her OCD.

“She struggled with self-advocacy before wilderness and the therapeutic boarding school,” said Weaver. “When peers asked her to do things that she knew were wrong, she’d sometimes do them in order to gain acceptance. Shame would then consume her. Now she has a better sense of who she is and we believe that she’s more likely to speak up and less likely to succumb to peer pressure.

“She’s learned how to self-advocate, express her needs and listen to other perspectives. And she wants continued therapy to help her keep building upon her healthy behaviors.” 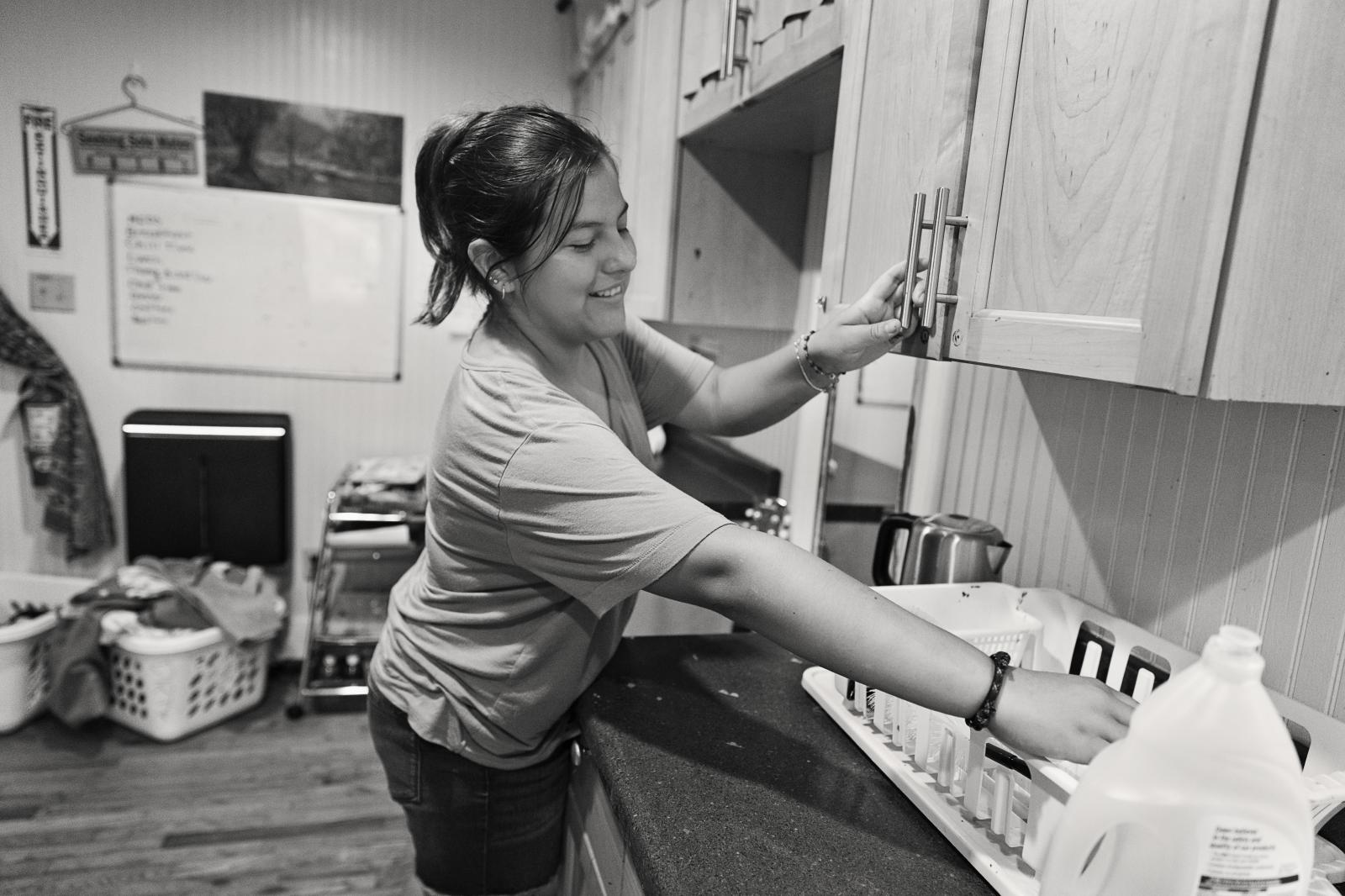 Trying to Stop the Pain

Scared, Sad, and Ashamed: The Lonely Journey when a Child is in Crisis

The High Cost for the Right Care

I Lost My Dad to the Lockdown