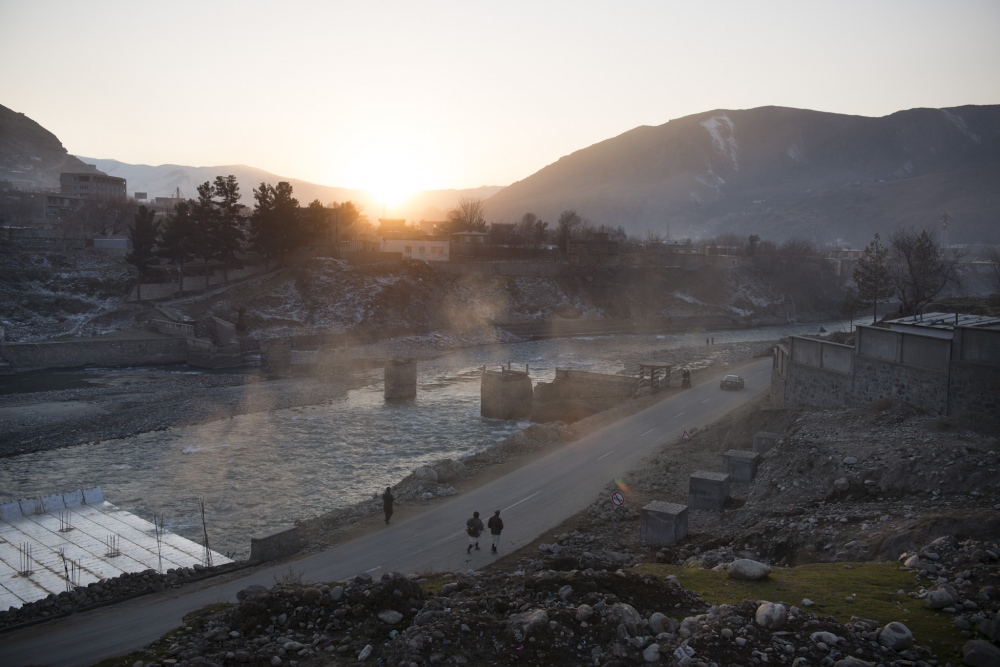 1 of 18 © 2021 Kiana Hayeri
FAIZABAD, AFGHANISTAN: 2014-12-14 An over view of Kookcha river in the town of Faizabad, just before the sun sets. The geographical structure of Faizabad, a town built among several valleys and protected by the mountains, has been very important and critical in their fightings throughout the history. 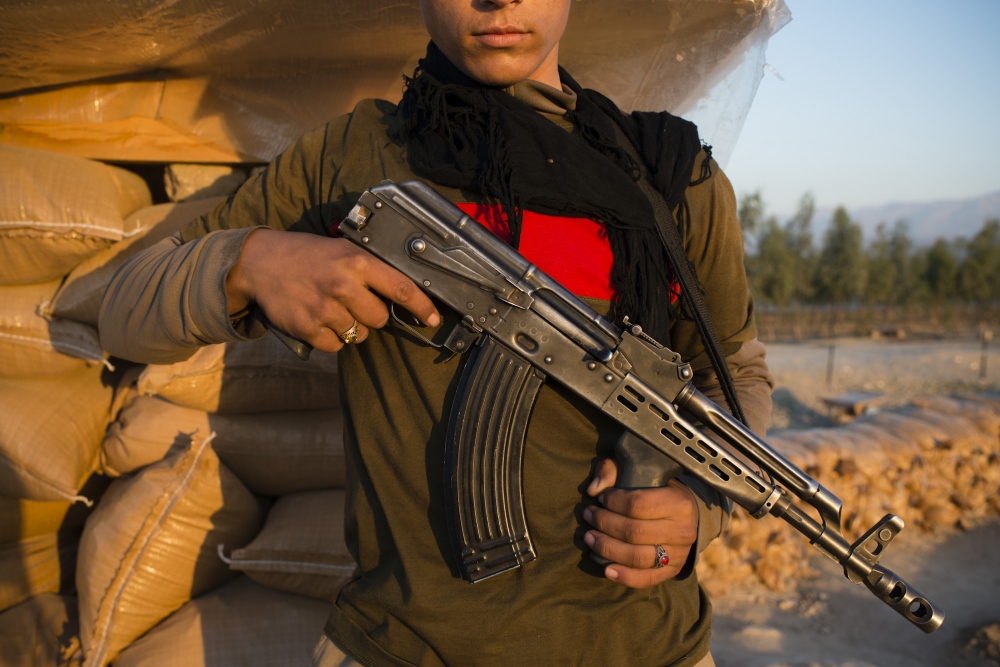 2 of 18 © 2021 Kiana Hayeri
NANGARHAR, AFGHANISTAN | 2015-12-03 | HW is 15 year old and illiterate, from Khugani district of Nangarhar province in Eastern Afghanistan. He's been working for the ALP in the same check post for 5 months now with weekly visit to his home village. 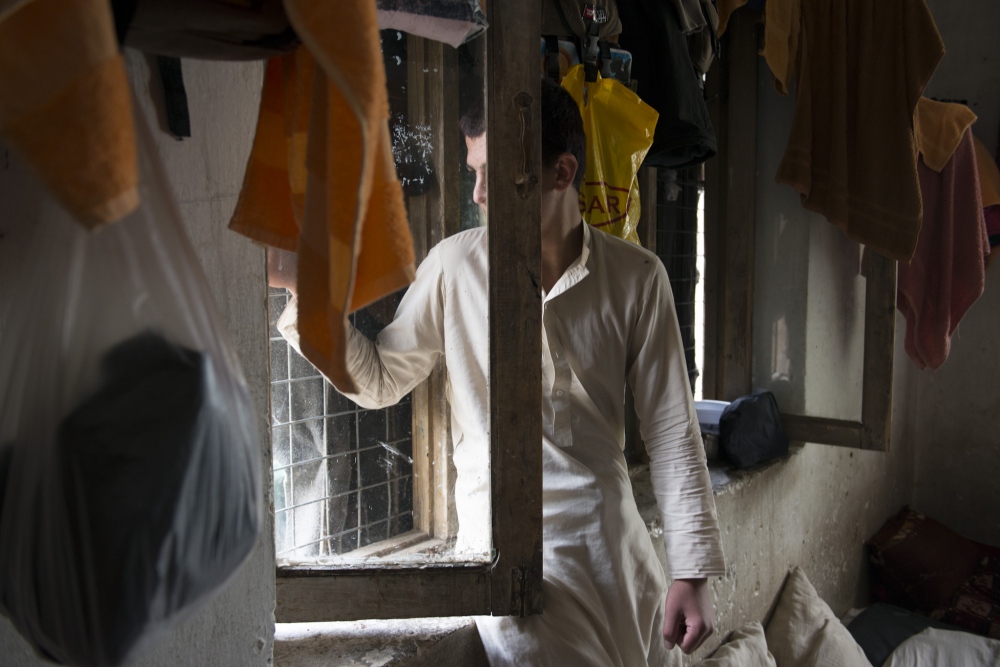 3 of 18 © 2021 Kiana Hayeri
KUNAR, AFGHANISTAN | 2015-12-05 | AW is 14 from Said Karam district of Paktia. He was picked up at a check point by the main bazar, on his way to attend a madrasa (religious school) in Damgan district of Kunar, known for its radical teaching of Islam, run by a Taliban commander. He was told that once he attends the school to learn of his duty, which is highly suspected to be carrying out suicide attack, his family will be reimbursed and paid. 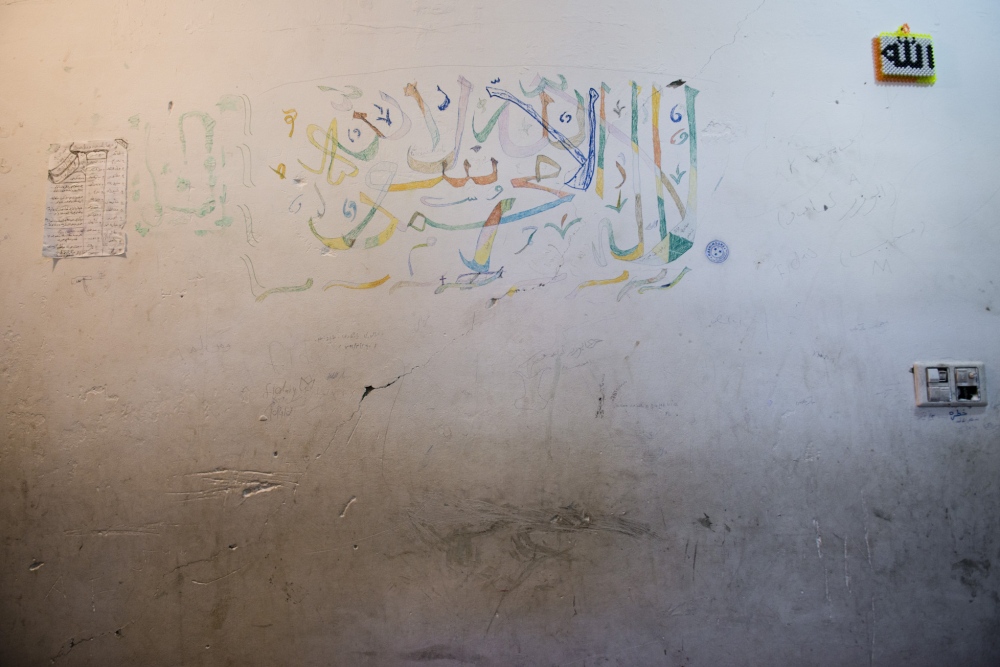 4 of 18 © 2021 Kiana Hayeri
NANGARHAR, AFGHANISTAN | 2015-12-02 | The writing on the wall of a call where to child political prisoner, meaning that they were recruited by Taliban, inside Jalal Abad juvenile rehabilitation centre. 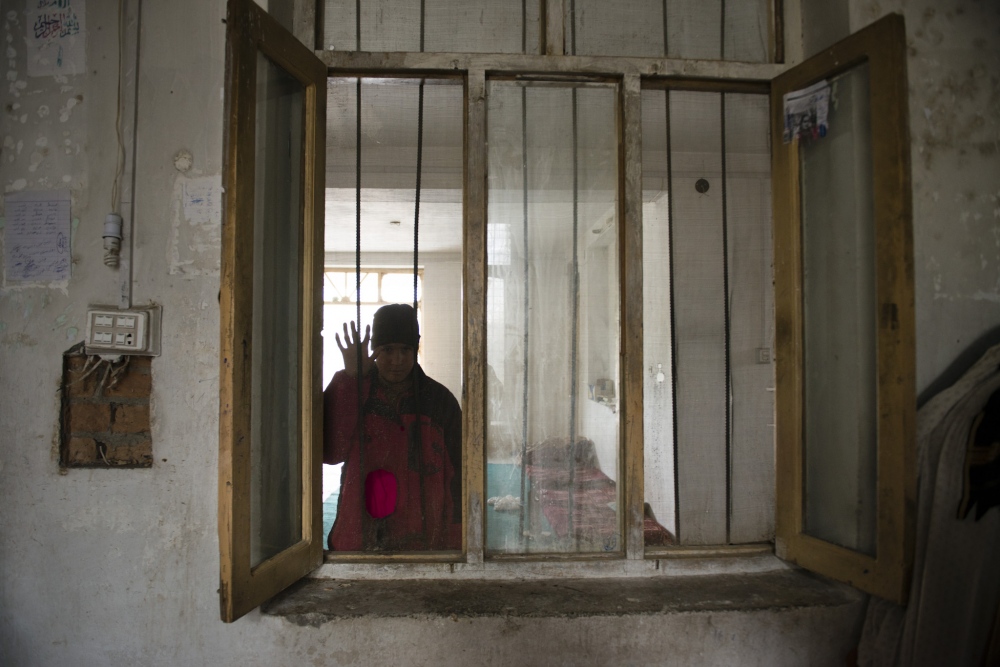 5 of 18 © 2021 Kiana Hayeri
KUNAR, AFGHANISTAN | 2015-12-05 | S is only 11 year old from Peshawar in Pakistan. S along with his 17 year old friend were on their way to Shigal district of Kunar to carry out a suicide attack on Afghan government forces when they were caught in Jalal Abad by police. He had joined Taliban in Pakistan for the money, but if he is sent back to Pakistan, execution with no trial will be awaiting him, so the director of Assad Abad juvenile rehabilitation centre took pity on him and has refused to send them back to Pakistan. 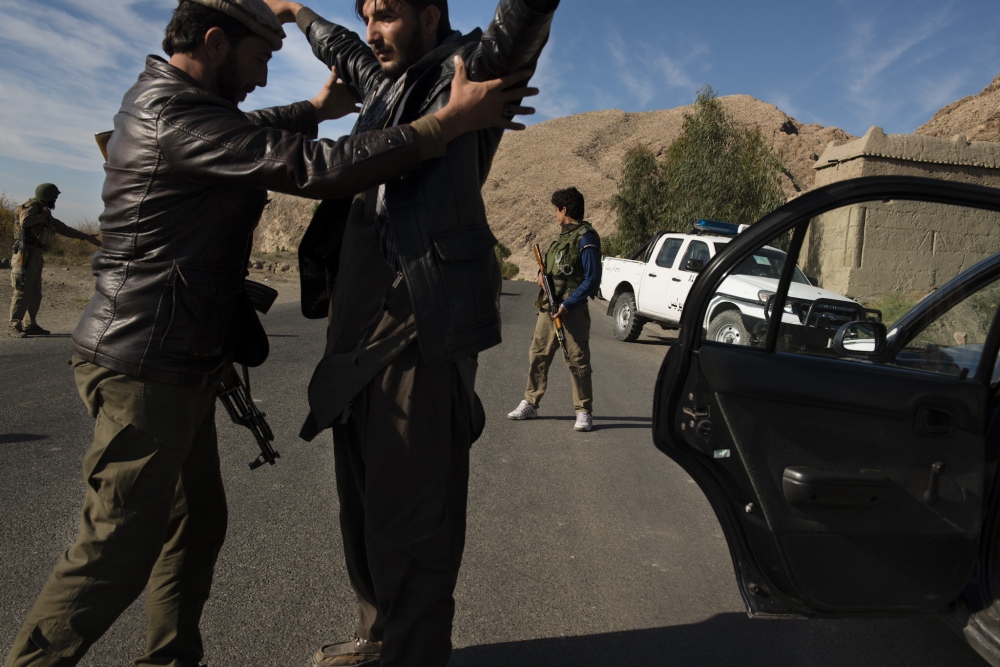 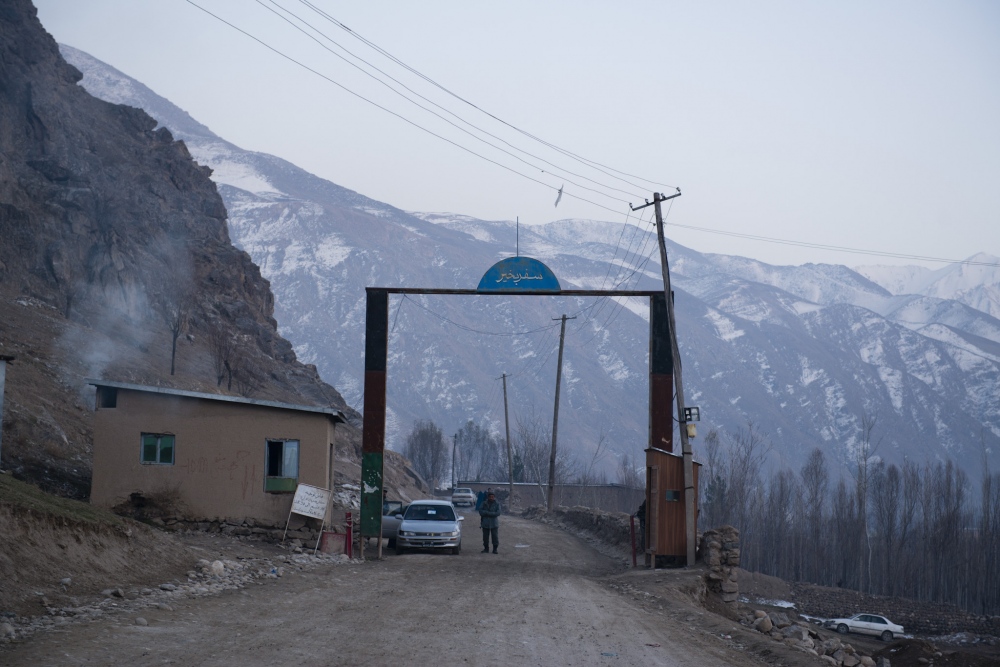 7 of 18 © 2021 Kiana Hayeri
FAIZABAD, AFGHANISTAN | 2014-12-13 | The gate signifying the end of the town of Faizabad where drivers have to pass through to get to the Jorm district in northern province of Badakhshan. 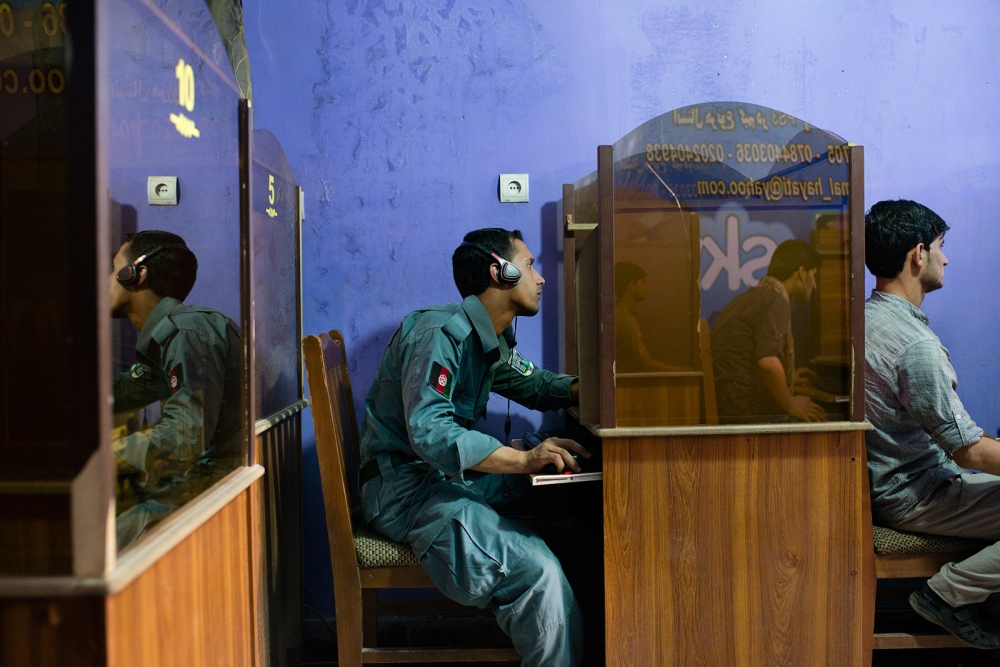 8 of 18 © 2021 Kiana Hayeri
KABUL, AFGHANISTAN | 2014-08-10 | A young Afghan policeman uses a computer on his spare time to check his Facebook account at an internet cafe in Goolaei, northern Kabul. 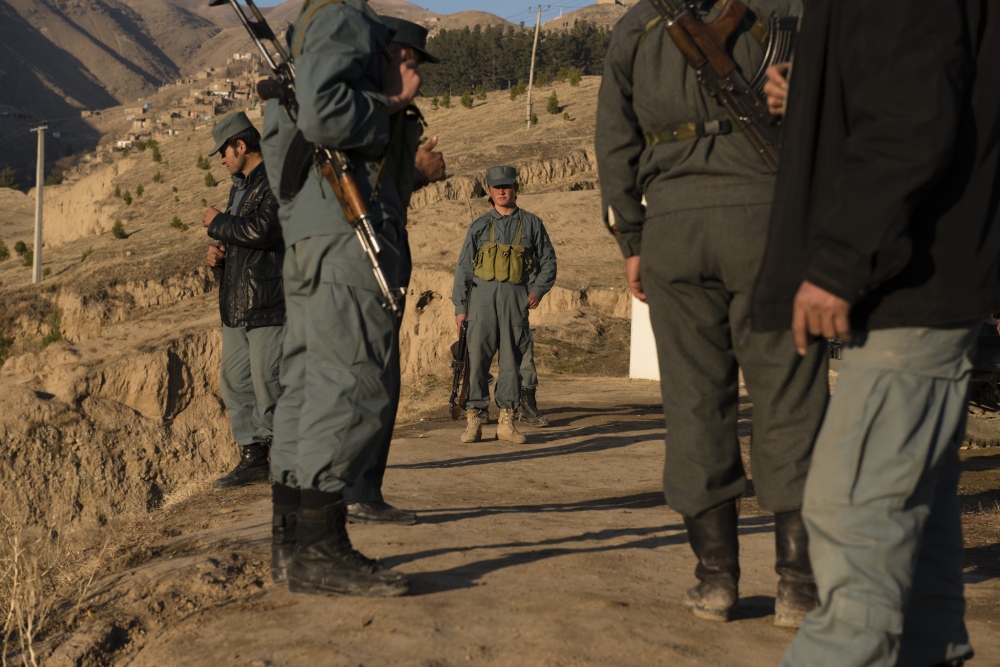 9 of 18 © 2021 Kiana Hayeri
FAIZABAD, AFGHANISTAN | 2014-12-14 | At a police outpost just outside of the town of faizabad, a young policemen, highly suspected to be a minor, is seen on patrol, watching the city from the top of the hill. In the past 2 months, 24 members of AFP (Afghan Police Force) had been kidnapped by Taliban. 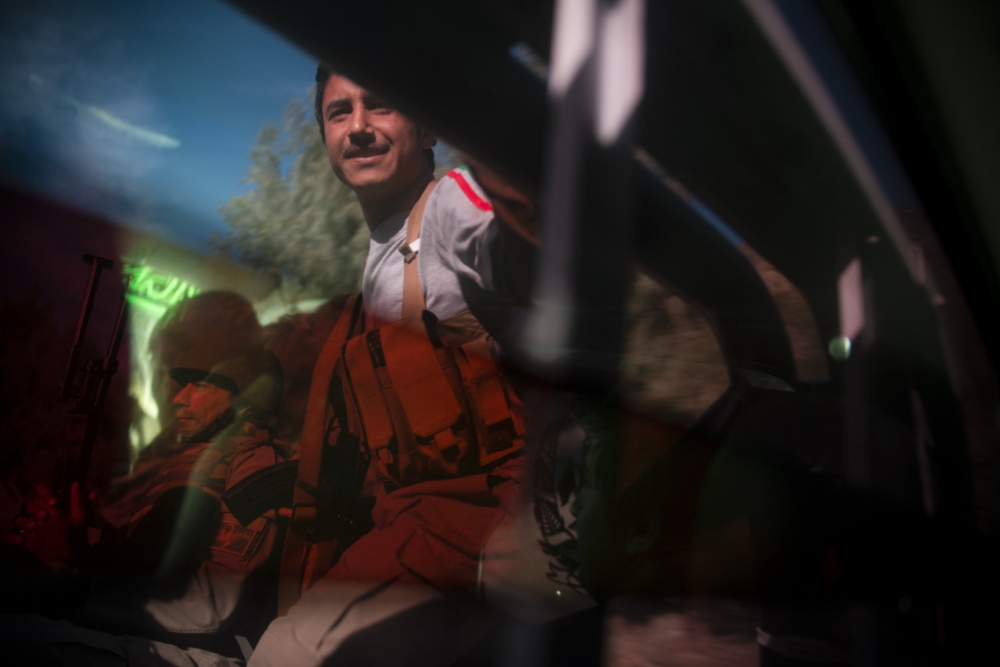 10 of 18 © 2021 Kiana Hayeri
NANGARHAR, AFGHANISTAN | 2015-12-03 | SW is 15 year old from Khewar district of Nangarhar province in Eastern Afghanistan. After he finished grade 6, his father passed away and being the oldest son and the only breadwinner for the family, he joined ALP forces a year later, 8 months before these photos were taken. SW's older brother was a member of ANP and was martyred while working. 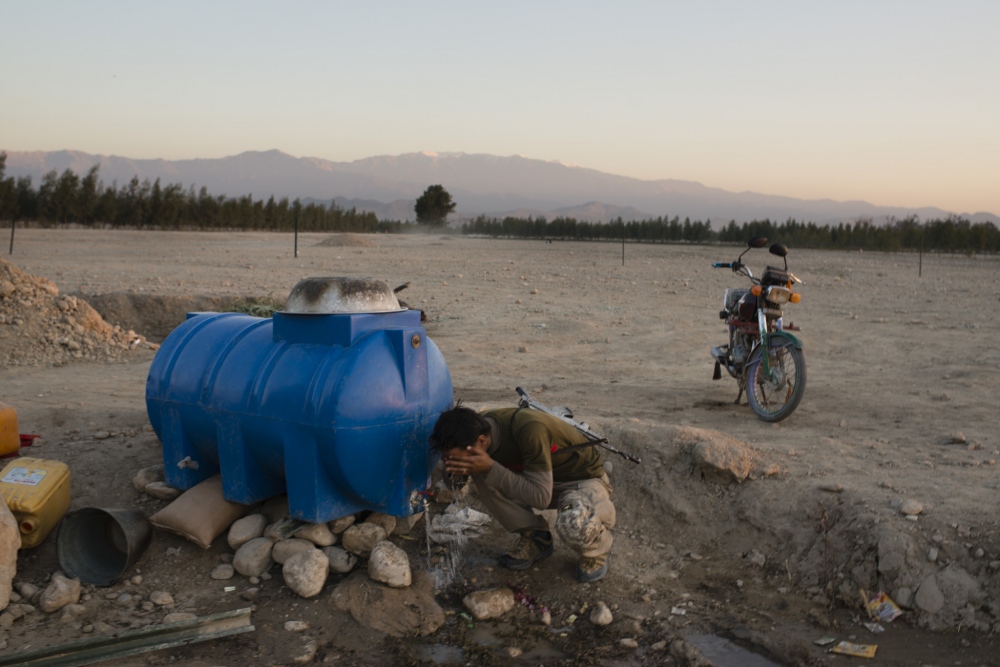 11 of 18 © 2021 Kiana Hayeri
NANGARHAR, AFGHANISTAN | 2015-12-03 | HW is 15 year old and illiterate, from Khugani district of Nangarhar province in Eastern Afghanistan. He's been working for the ALP in the same check post for 5 months now with weekly visit to his home village. 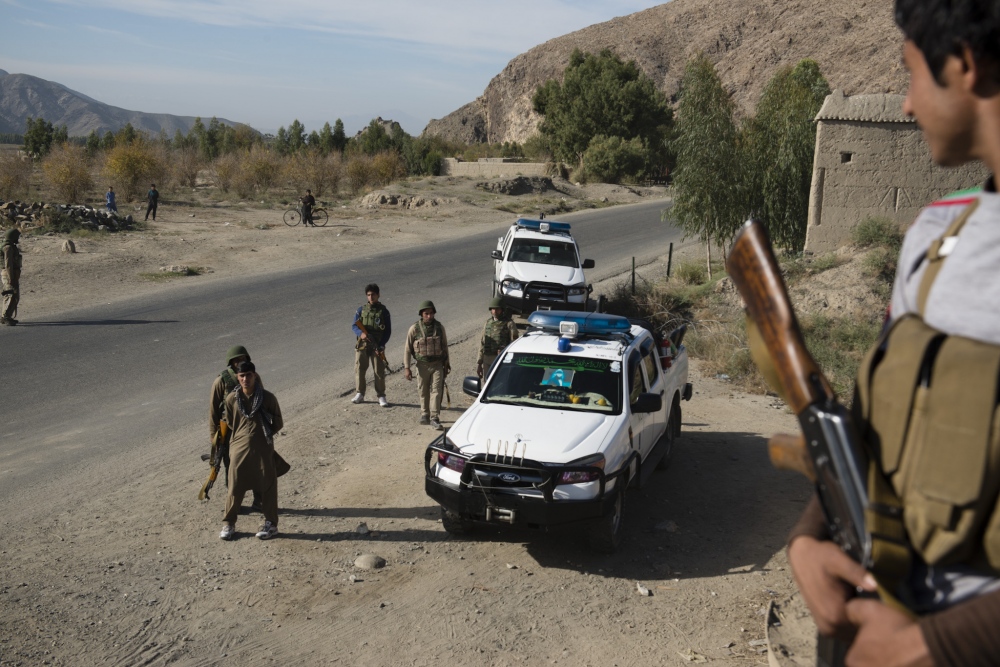 12 of 18 © 2021 Kiana Hayeri
NANGARHAR, AFGHANISTAN | 2015-12-03 | SW on the right, is 15 year old from Khewar district of Nangarhar province in Eastern Afghanistan. After he finished grade 6, his father passed away and being the oldest son and the only breadwinner for the family, he joined ALP forces a year later, 8 months before these photos were taken. SW's older brother was a member of ANP and was martyred while working. 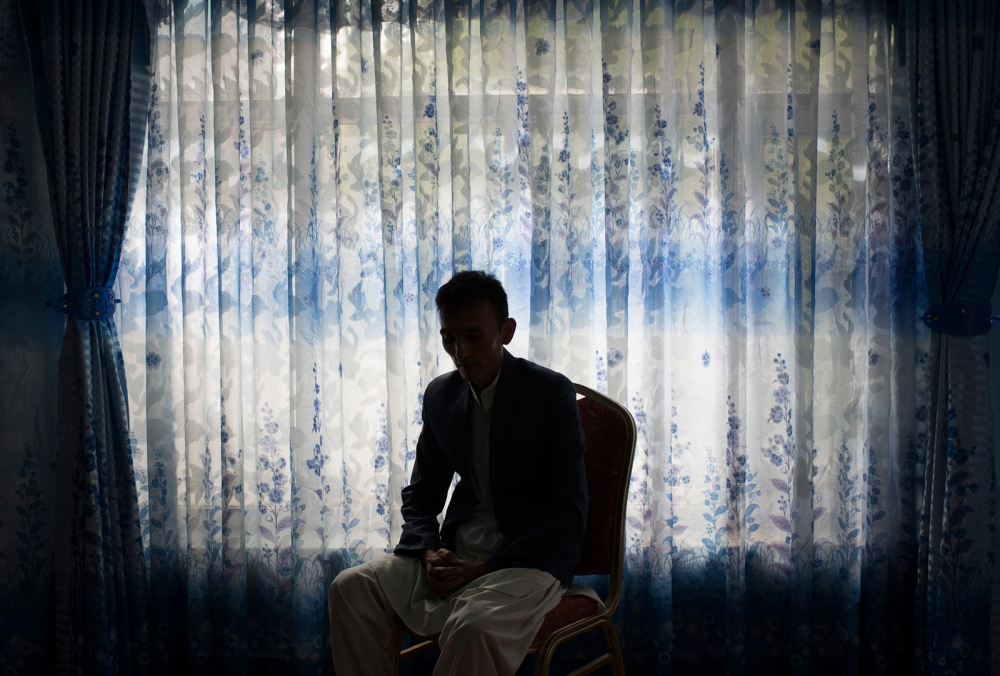 13 of 18 © 2021 Kiana Hayeri
MAZAR SHARIF, AFGHANISTAN | 2015-10-10 | SA (24) left Afghanistan in 2007 when he was only 17 years old. His father was an Uzbak member of Taliban and was pressuring him to join the insurgency as well. On the other hand the government continuously harrased SA because of his father's affiliation with Taliban, banning him from going to university and chasing him from one city to another. Consequently SA fled Afghanistan and lived in UK as a refugee for 8 years. He was deported back to Afghanistan in 2014 after appealing the verdict in the court twice. He now lives in hiding in Samangan, northern Afghanistan, where heavy fighting is spreading from Badakhshan and Kunduz to his home village. 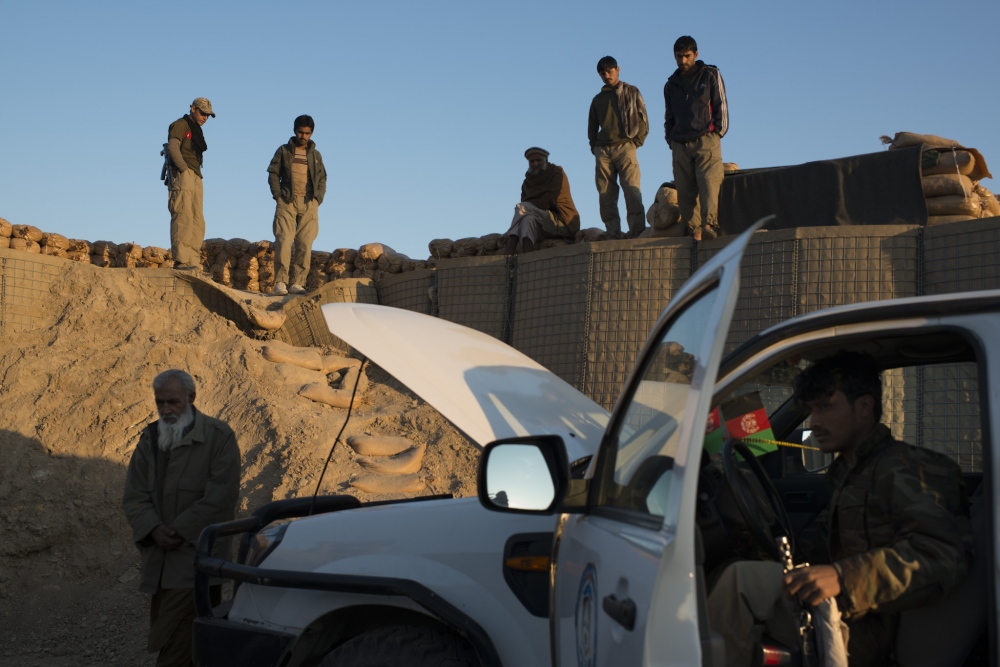 14 of 18 © 2021 Kiana Hayeri
NANGARHAR, AFGHANISTAN | 2015-12-03 | HW, wearing a cap, is 15 year old and illiterate, from Khugani district of Nangarhar province in Eastern Afghanistan. He's been working for the ALP in the same check post for 5 months now with weekly visit to his home village. 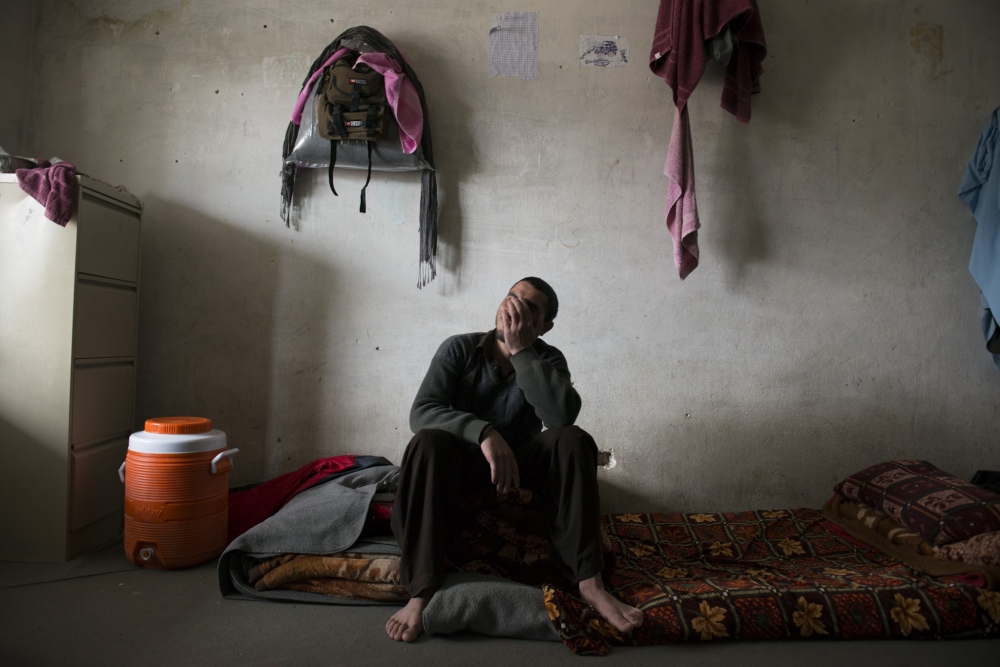 15 of 18 © 2021 Kiana Hayeri
KUNAR, AFGHANISTAN | 2015-12-05 | ZI is 17 year old from Nara district of Kunar. He has been in juvenile rehabilitation centre of Assad Abad, Kunar for 6 months now under suspicious of having direct connection of members of Taliban, however he has declined all the charges and is awaiting his court trial. 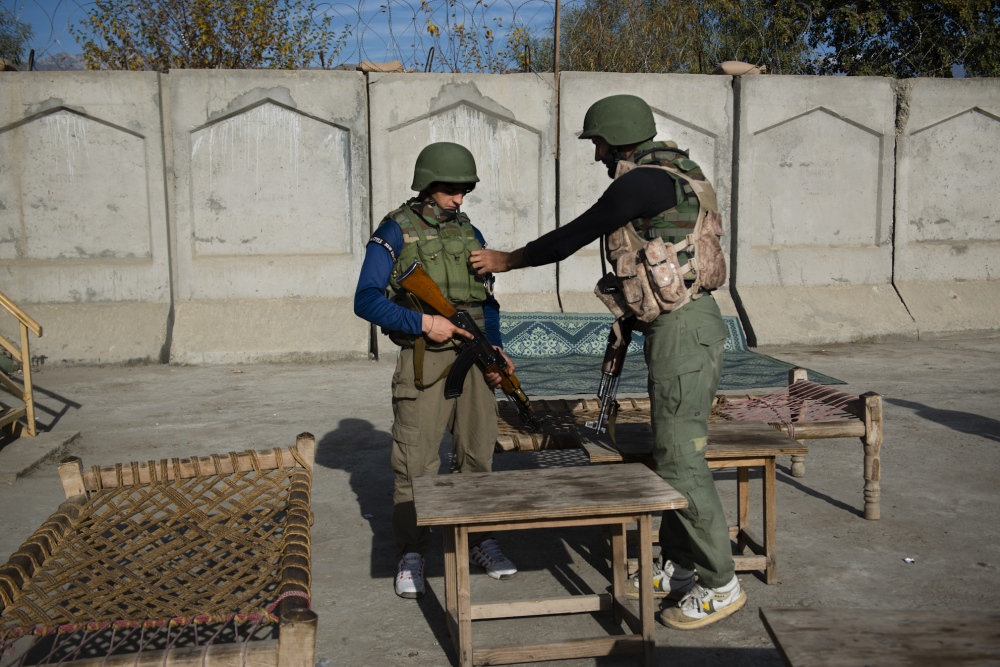 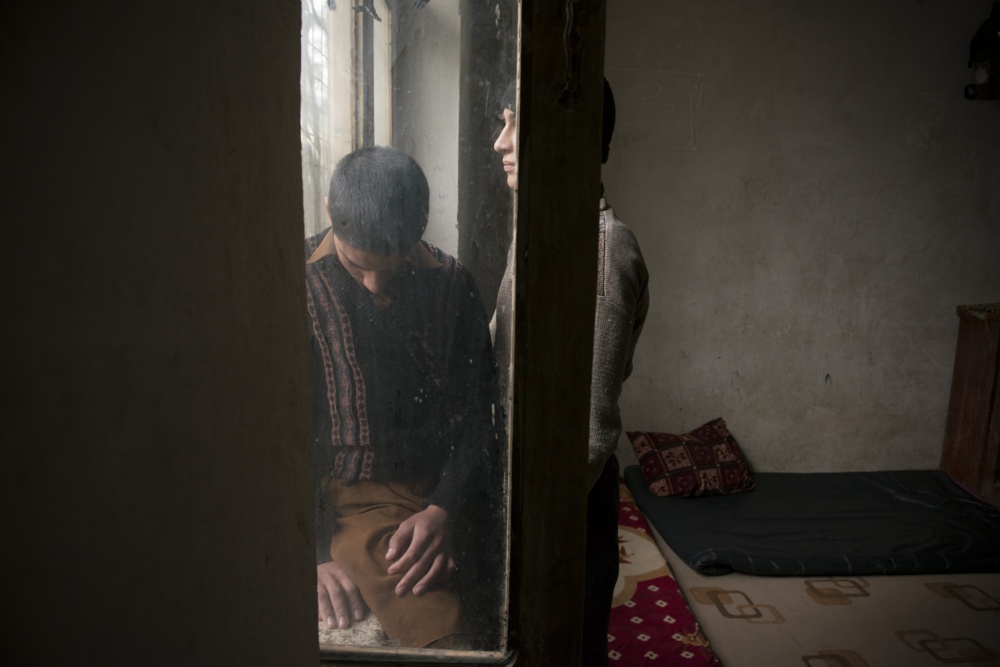 17 of 18 © 2021 Kiana Hayeri
KUNAR, AFGHANISTAN | 2015-12-05 | JZ, on the right, is 15 year old from Ghazi Abad district of Kunar and was attending a madrasa that belongs to a Taliban commander when he was arrested. B, on the left, is 12 year old from Dangan district of Kunar and was caught by the police when he was running errands for Taliban, photocopying a booklet on teaching of radical Islam. Both teenage boys are awaiting their court hearing in Assad Abad juvenile rehabilitation centre. 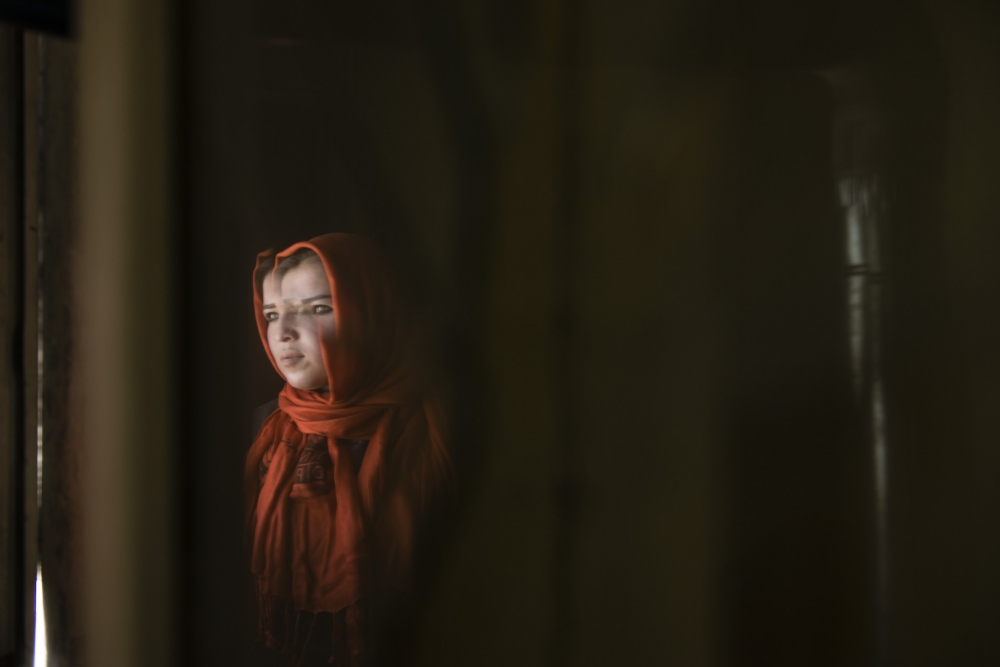 Widespread use of children in armed conflict is one of the most awful trends in wars today. According to International Rescue Committee (IRC), an estimated 300,000 boys and girls are currently trained for combat or used as porters, spies or sex slaves around the world. They are compelled to become instruments of war, to kill or be killed, with devastating effects on their physical, emotional and social development. In Afghanistan, a country destabilized by 40 years of conflict, children continue to be recruited and used by both armed forces and armed groups. On a brief assignment for Child Soldier International (CSI), a UK-based human rights research and advocacy organization, a fellow Canadian journalist and I investigated the recruitment of children below age of 18 with the Afghan National Police (ANP), the Afghan Local Police (ALP) and other insurgency armed groups who have all been consistently listed as parties which recruit and use children since 2010.

*For the protection of the children pictured in this series, their identities have been concealed and their only identified by their initials. (2015)

Recruitment and use of children in Afghanistan is triggered by a complex set of reasons including duty to the family, patriotism, honor and economic difficulties. Inadequate age verification procedures, low levels of birth registration and an easy ability to falsify identify documents facilitate recruitment into armed forces and children have been both formally and informally recruited. Some children have been used by the ANP as “tea boys” and guards at check points. Others have been recruited by the Taliban to carry out suicide attacks and plant improvised explosive devices. We also came across children who had been used as spies, in active combat and gathered reports. On a few cases it was reported that the child was used for sexual purposes by his commander. On the other hand, some children suspected of association with armed groups have been unlawfully detained on national security related charges (called Political cases) and experienced ill treatment or torture. With rising violence and insecurity, experts say it will only get harder to protect children from a landscape in which they can be used as couriers, spies, fighters, and sometimes even suicide bombers.

The recruitment and use of children in Afghanistan has to be viewed in the context of widespread poverty, lack of opportunity, lack of access to education and employment, and a complete failure of the rule of law. The government has limited reach in areas controlled by the Taliban, ISIS’s Afghan affiliate or other insurgent groups. These armed groups employ various methods to recruit children — including coercion, financial assistance, or offering protected status for either the child or his family. Taliban in Afghanistan and Pakistan have this dynamic where they can force people to give up a child by saying, ‘You can either give us this amount of money — which is usually more than an annual salary — or you can give us one of the kids and because the families are quite large, the parents then have to decide which child they’re going to give up. For the children themselves, the kinds of compensation or benefits offered are also much greater today than in the past. It used to be a mobile phone and a gun, and a level of prestige that was accorded. Now actual cash is changing hands. Another way children join armed groups is through family or social ties. If their father or brother belongs to a group, it’s more likely they’ll join too. Insurgent groups and terrorists capitalize on an environment in which there’s hopelessness, and a lack of feeling that there’s a future ahead of you. So, what they're promising, based on teaching of Islam, is an afterlife in which everything is perfect. Recruiting children also helps build a group’s “longevity and resilience,” and many insurgency groups in the past, have publicized their efforts at training children, claiming that they’re training the next generation of jihadis. ISIS’ so-called “Cubs of the Caliphate” are part of its long-term strategic plan to create what it considers an “ideologically pure” army.

A deep sense of filial responsibility and prestige and patriotism play a role in children joining the ANP or ALP, but poverty still remains the principle driver, with potential salaries for the ALP ranging from $103 to $155 per month, and salaries for the ANP ranging from $172 to $310.
There are no clear estimates of how many children are currently fighting in Afghanistan so another challenge in the absence of any sort of framework is the lack of rehabilitation programs for those who have fought or trained in armed groups. There’s nothing to support their rehabilitation, whether psychological, physical, emotional or educational. There is absolutely no service in place at the moment.

By Kiana Hayeri / kabul — Hajar Sarwari was in labor with her second child at a west Kabul maternity ward on Tuesday morning when..
Oct 1, 2020

Your Veil is a Battleground

By Kiana Hayeri / Tehran — Your Veil is a Battleground  is a continuation of Beyond The Veil project. Inspired by the title of..
May 29, 2020

A Generation of Afghan Widows

The day I become a woman

By Kiana Hayeri / iran — According to Islamic Shi’a laws in Iran, when a girl turns nine, she is considered to be mature..
May 10, 2020

Afghan Women On The Frontline

By Kiana Hayeri / Tehran — In light of economic crisis and ongoing political oppression, the current wave of immigration out of Iran..
Feb 19, 2020

Afghan Women Demand to be Heard

Bombed by ISIS, an Afghan Wrestling Club Is Back: ‘They Can’t Stop Us’

"The Taliban Made Me Fight"