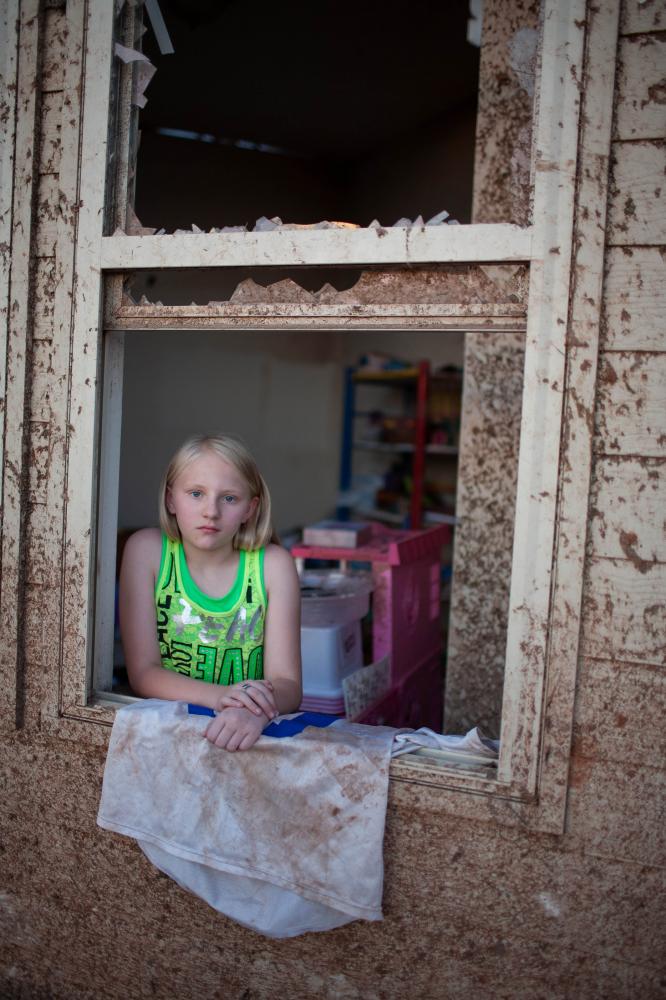 1 of 16 © 2021 Katie Hayes Luke
Sara hock, 11, poses for a portrait in her bedroom window at her family's home in the Heatherwood Addition, a subdivision located a mile and a half east of Moore, Okla. Sarah was at school for the tornado, while her father Brian Hock, not pictured, found shelter at a neighbor's storm shelter during the tornado. 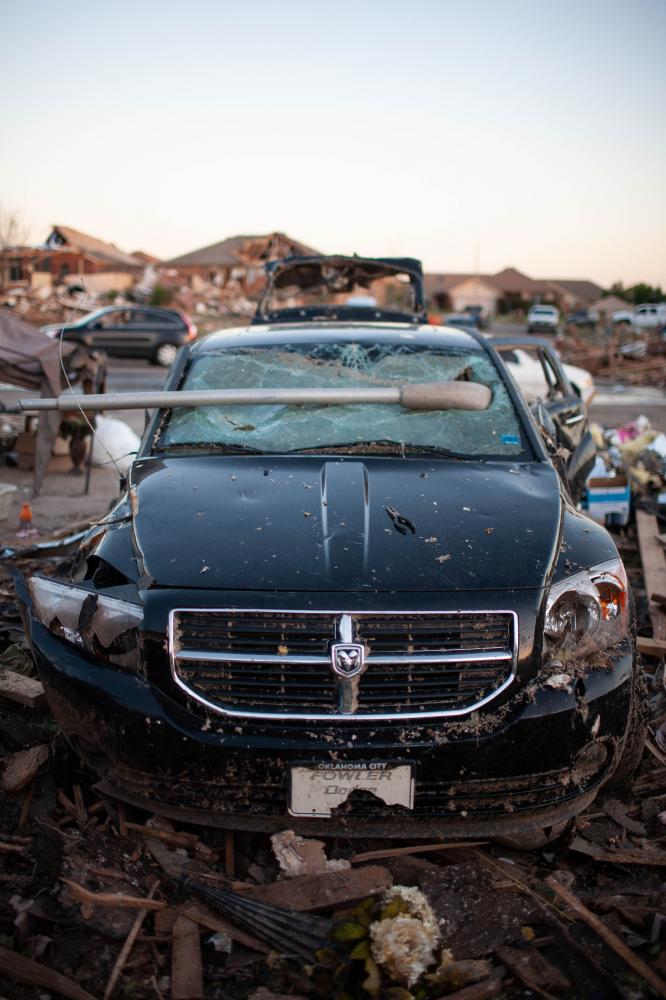 2 of 16 © 2021 Katie Hayes Luke
The Hock family, their car pictured here, did manage to find the pet guinea pig, their mortgage papers, some dishes and an expensive bottle of wine in the ruble. 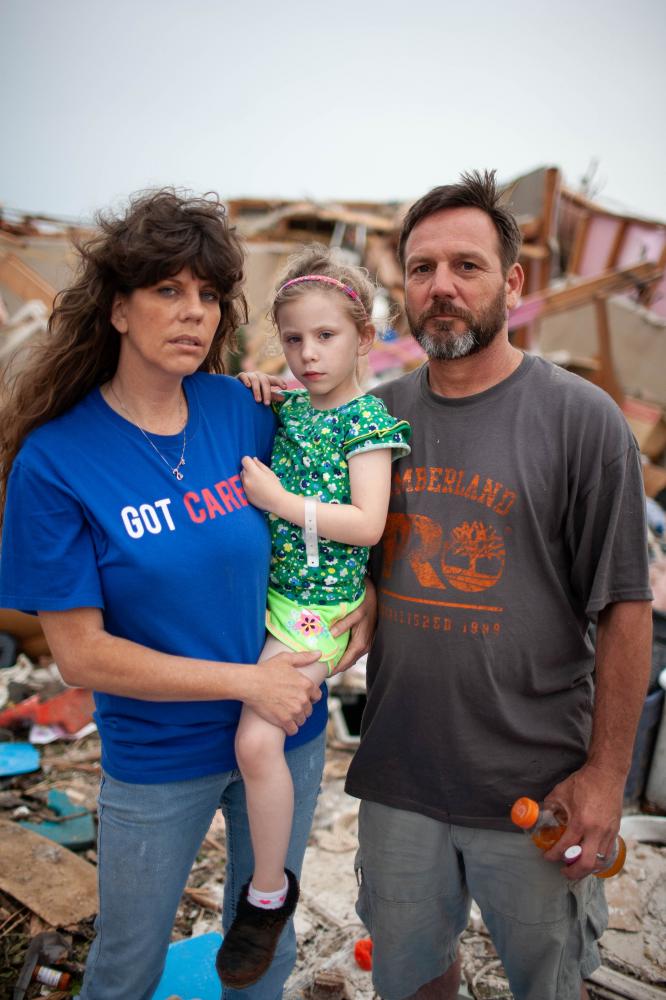 3 of 16 © 2021 Katie Hayes Luke
The tornado killed 24 people and caused an estimated $2.2 billion worth of damage. As the community reflects on what happened, one question is: How did so many manage to survive such devastating destruction? Cater (right) took shelter in the family storm shelter with seven neighbors and two dogs. Carter (one name only), his fiance Bree Owens and her daughter Stevee Owens,5, pose for a portrait outside their home. 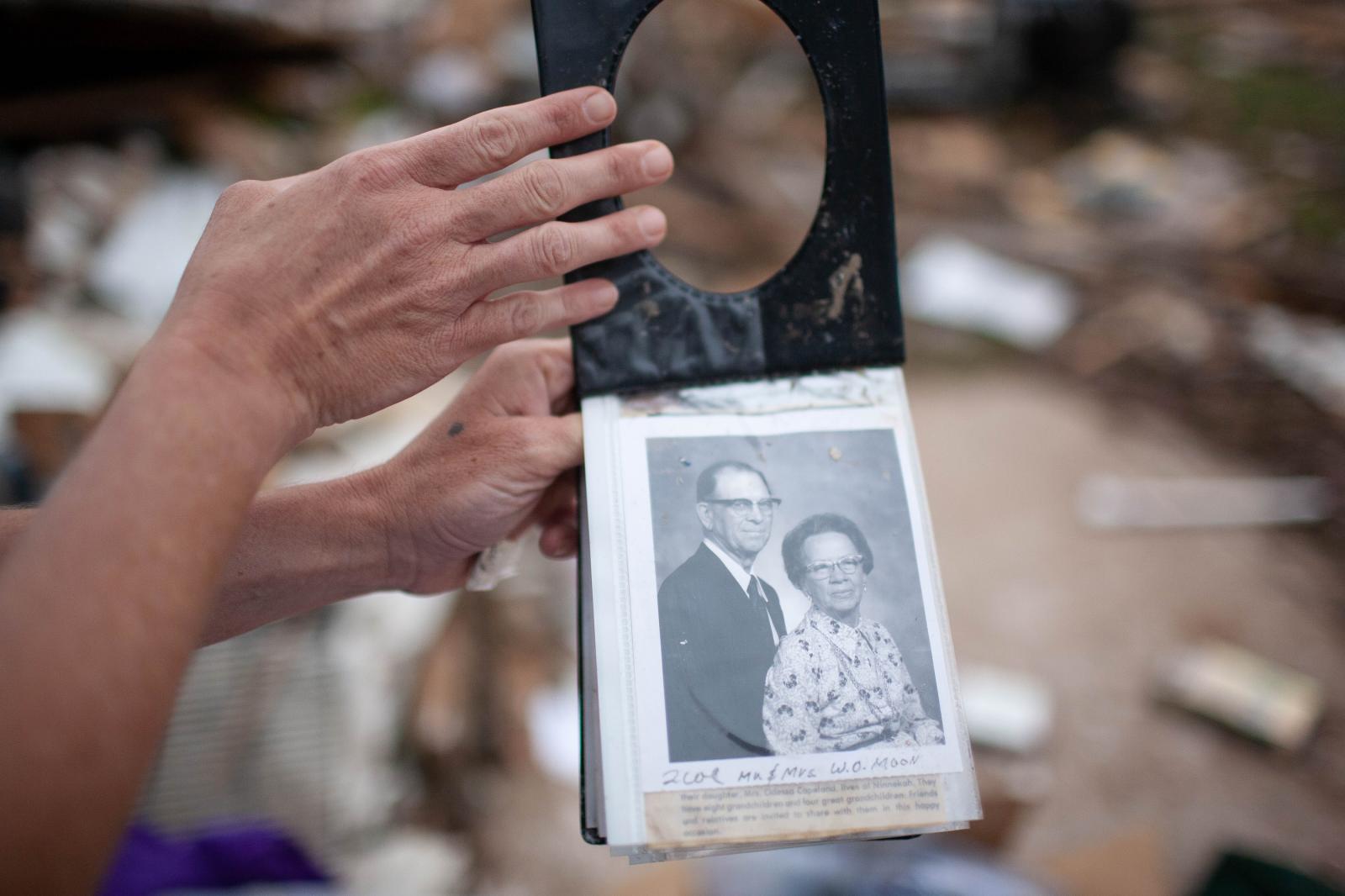 4 of 16 © 2021 Katie Hayes Luke
Around 3pm when the tornado hit his community, Carter could hear the tornado approach. "It was like a giant vacuum cleaner going over you." Amongst the rubble, Bree Owens found pictures of her great- grandparents. 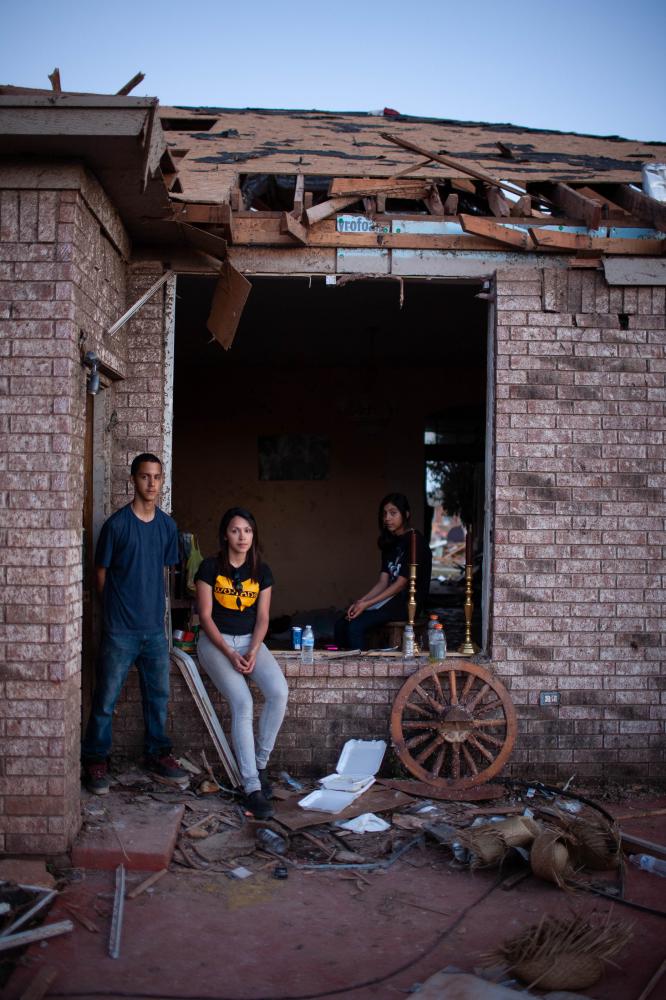 5 of 16 © 2021 Katie Hayes Luke
Siblings (from left) Alan, Sylvia and Ariel Trillo pose for a portrait at their home in Heatherwood. 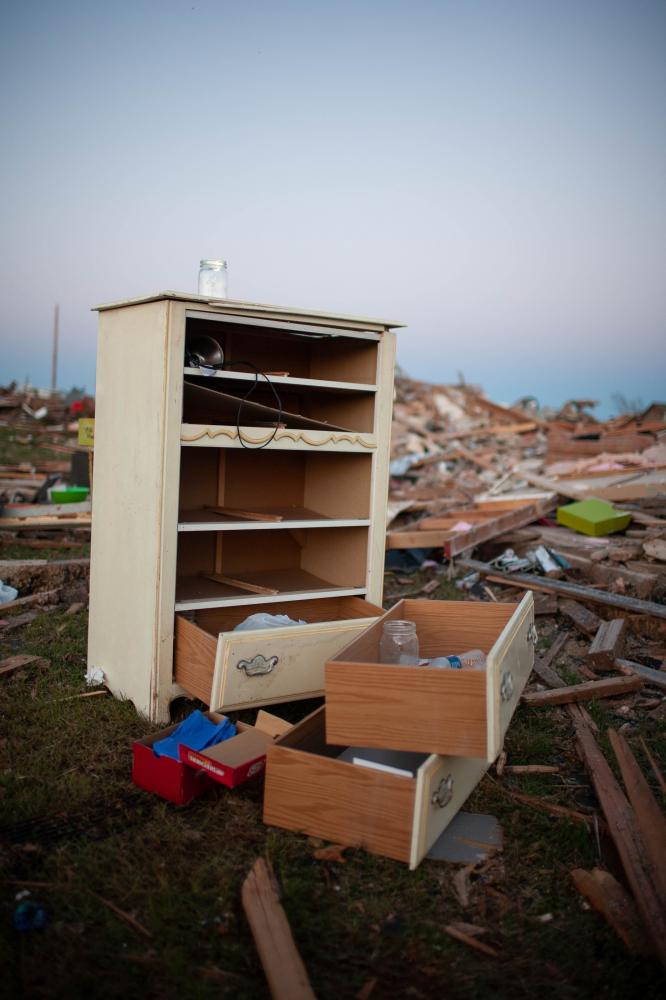 6 of 16 © 2021 Katie Hayes Luke
The Trillo home is one of the few homes in the division that is still standing, though everything inside is damaged and many belongings, such as this dresser, were scattered into the yard. Sylvia was amazed at the outpouring of help the community received from strangers following the tornado on Monday, May 20, 2013. 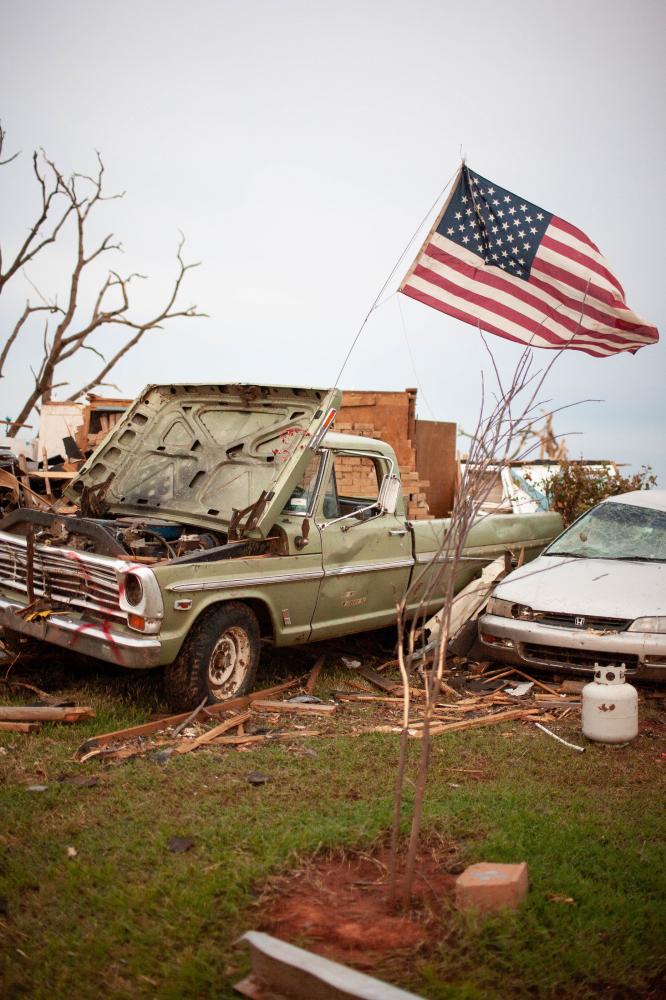 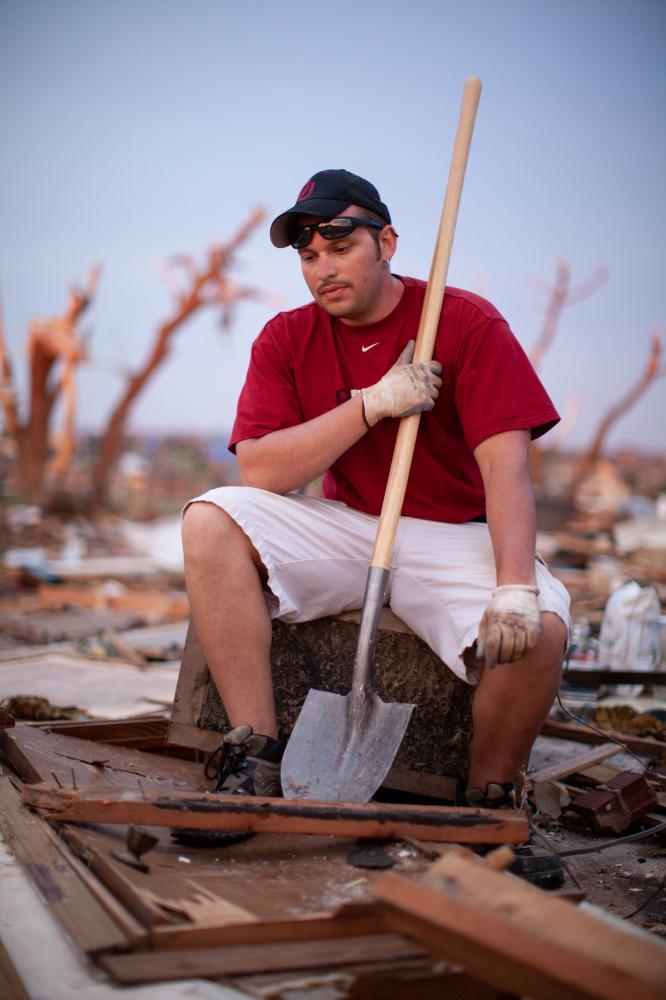 8 of 16 © 2021 Katie Hayes Luke
Clint Wallace pose for a portrait outside of his childhood home in the Heatherwood Subdivision. HIs father Kenneth, not pictured, has lived here for 26 years, raised his children at this home, but does not plan on rebuilding. He is devastated by the loss and is tired of the anxiety he feels each time a tornado gets close. 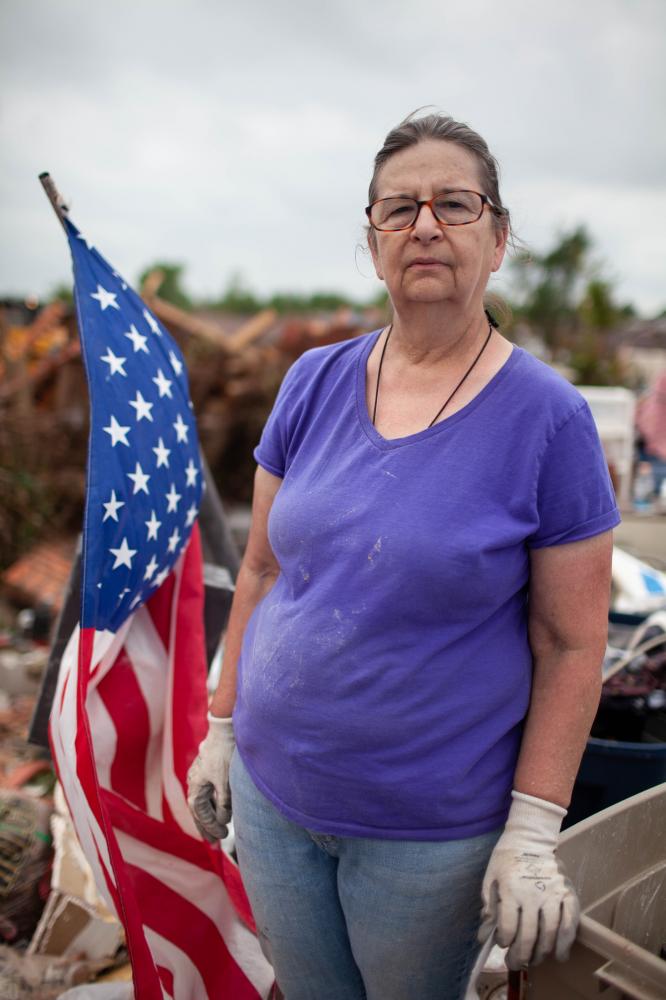 9 of 16 © 2021 Katie Hayes Luke
Donna Sidmore watched the tornado on tv from work as it passed over her neighborhood. Her two dogs and four cats, three cats are still missing, were in the house. She does not know any of the volunteers that are swarming over her property. While she is still processing what happened, 20 people came over and started working. She has always hung a flag on her front porch; this one used to hang on the front porch. 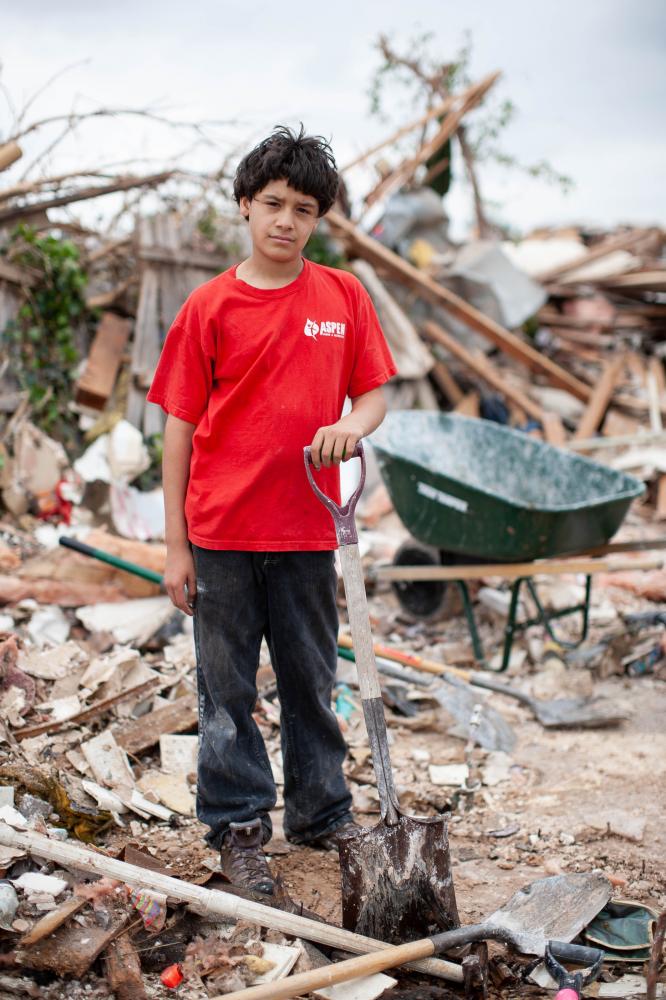 10 of 16 © 2021 Katie Hayes Luke
After the tornado came a flood of volunteers. Henry Henley, 12 years old, flew from Aspen, Co with his mother March Henley, not pictured. Henley brought her son, because he needed to see that this could happen to anyone and have a better understanding of what is important. Henry said, "People lost their homes and I want to show respect and I care." 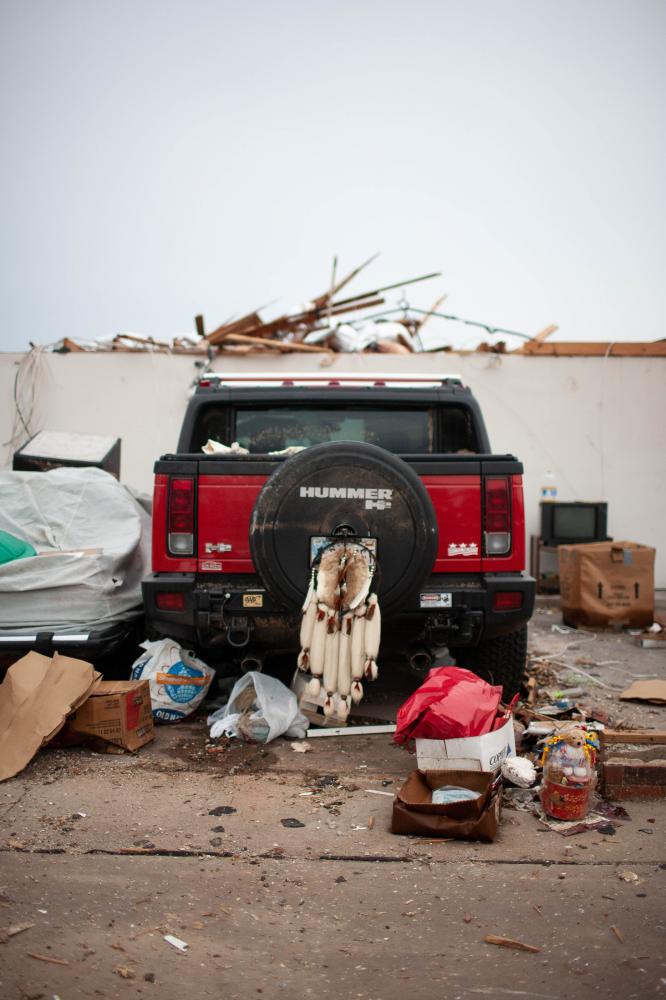 11 of 16 © 2021 Katie Hayes Luke
With all of the personal possessions left unattended, the city of Moore put into place a curfew in order to suppress looting. 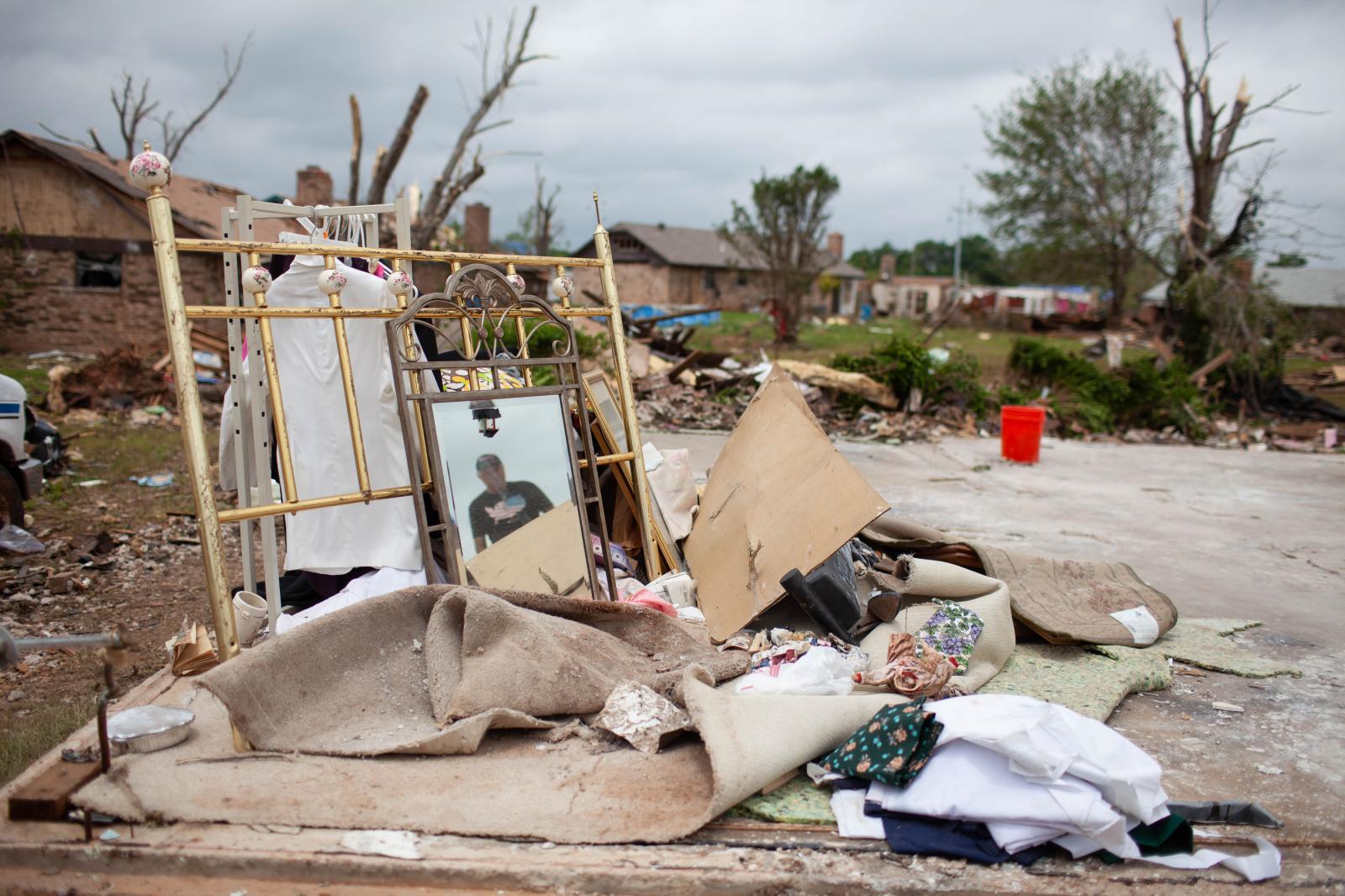 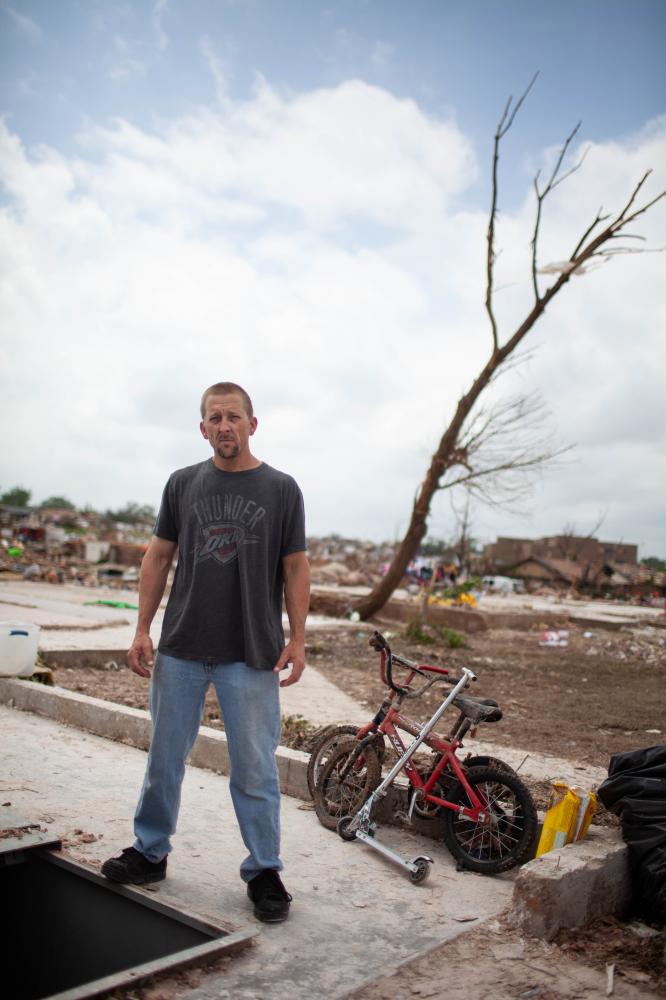 13 of 16 © 2021 Katie Hayes Luke
Kyle Kilpatrick watched the tornado on t.v. while at work. As he watched the hook echo get bigger on the screen, he knew his house, where his two boys were with his mother, had been hit. Kilpatrick is thankful for people helping and the intensity in which they are volunteering. 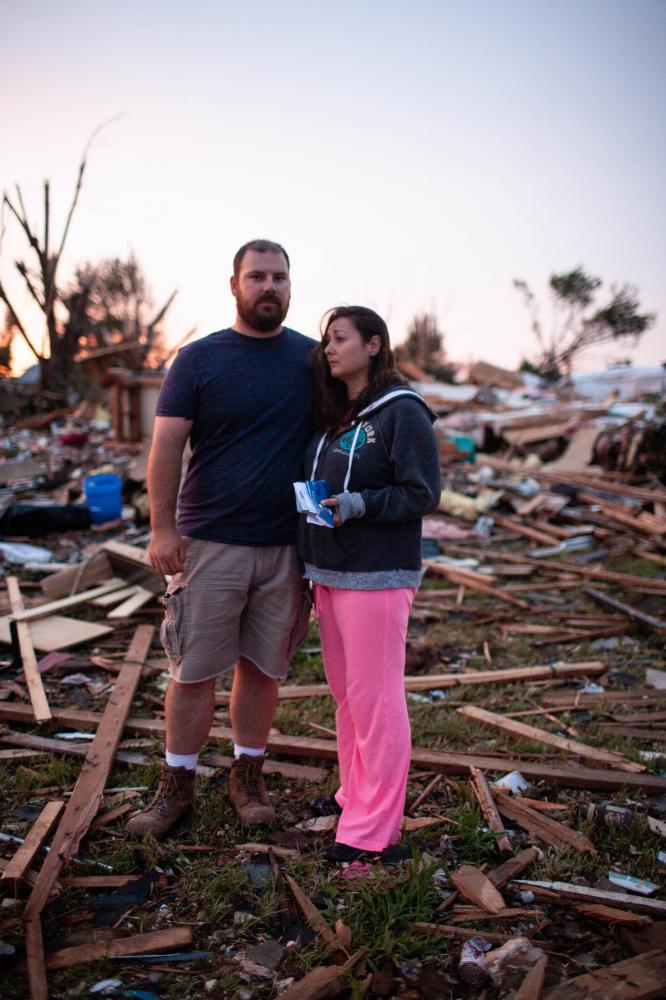 14 of 16 © 2021 Katie Hayes Luke
Stephanie McKinney, photographed with her husband Scott McKinney, credits Gary England, the chief meteorologist for KWTV-DT in Oklahoma City, for saving her husband's life. Scott fled the house after hearing warnings from England on t.v., taking the family dog with him. Stephanie is scared to death that insurance is not going to pay out enough money. "I am scared and they can't get back to you fast enough to tell you it's okay." 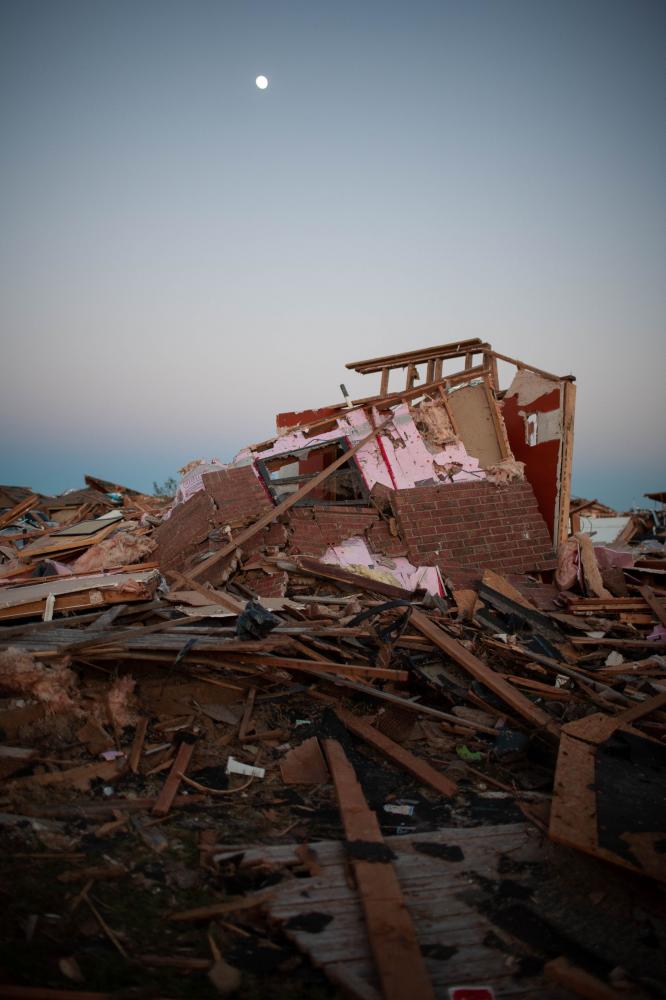 15 of 16 © 2021 Katie Hayes Luke
Homes in the Heatherwood Addition, a subdivision in It is unpredictable what part of the home, if any, can survive a tornado. The safest place to be is in a storm shelter. 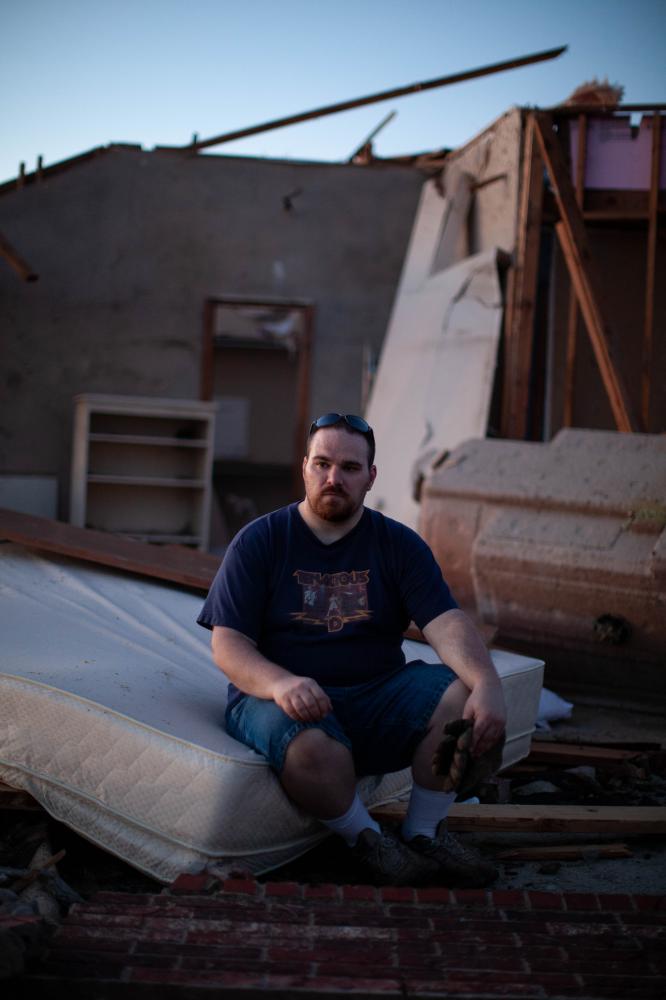 16 of 16 © 2021 Katie Hayes Luke
Matt Claxton, a chef at the Hospital in Midwest City, poses for a portrait at his home in the Heatherwood Addition, a subdivision in Moore located a mile and a half east of I35 in Moore, Ok Wednesday, May22, 2013. Matt Claxton, his wife (not pictured), and their two dogs took shelter in a neighbor's storm shelter across the street. The area behind Claxton is the room that they were planning on taking shelter in for the tornado.
Public Story
Moore Okla, Amongst the Rubble
Credits: katie hayes luke
Updated: 03/05/20
Location: Moore, oklahoma, usa
Archived as:  2013, Community, Documentary, Editorial, Environment, Katie Hayes Luke, Media, Moore, NPR, Oklahoma, Photography, Photojournalism, Tornado

On May 20, 2013, a tornado ripped through the town of Moore, Okla. Many of the residents from the Heatherwood subdivision in Moore watched the destruction of their homes on television while at work. Those who were at home sought refuge in neighbor's storm shelters. When they emerged after the storm, residents saw that their houses were now unrecognizable piles of wood, metal and debri.

I spent five days photographing alongside reporters from NPR to visually report the devastation and impact the tornado had on the local residents. I was stunned by the sheer force and destruction left behind by the tornado, but also impressed by the resilience of a community. This is a story of loss, but also a portrait of a community that pulled together to find hope amongst the rubble.

Published work from this series on NPR:

Amid Nails and Mud, Oklahoma Neighborhood Pulls Together

Faces and Places the Tornado Left Behind

By Katie Hayes Luke — American Dreams Texas has a complex relationship with immigration, which has been exacerbated in the last..
Mar 4, 2020

By Katie Hayes Luke / Texas, Usa — Bloodless Since 2009, I have traveled to south Texas to document bloodless bullfighting at a ranch called..
Apr 24, 2017