Photographer
With Their Own Hands
Follow Hire
Profile
Stories (3)
News (5)
Location: Quebec, Canada
Nationality: Canadian
Biography: Nothing is more urgent than shifting the global climate change conversation from despair to optimism, from apathy to action. Since 2009, I have focused my cameras (and more recently my drones) exclusively on the energy transition, creating... read on
Focus: Writer, Technology, Science, Documentary, Photography, Blogger 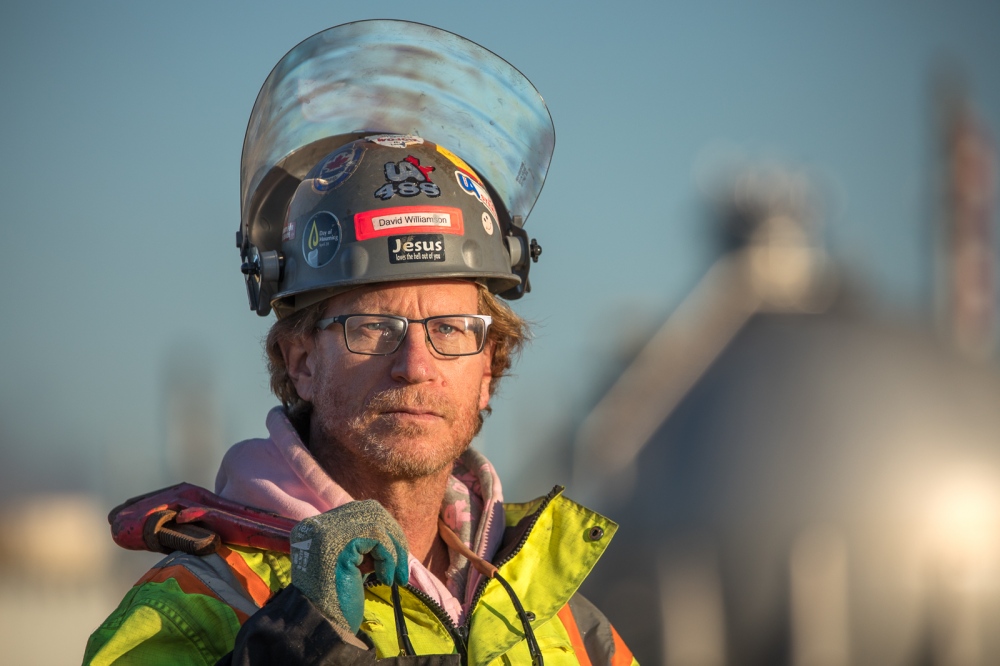 David Williamson, an unemployed pipefitter, stands in front of his former place of employment at an oil refinery in Edmonton, Alberta. He is currently looking for work in Alberta's nascent renewable energy sector. 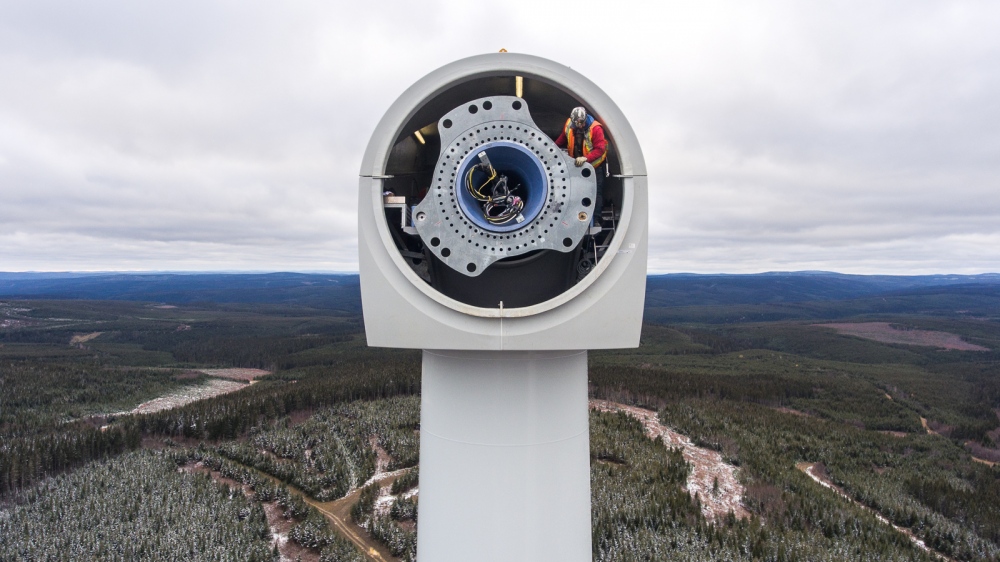 An ironworker peers out from the nacelle during construction of a wind farm in eastern Quebec. 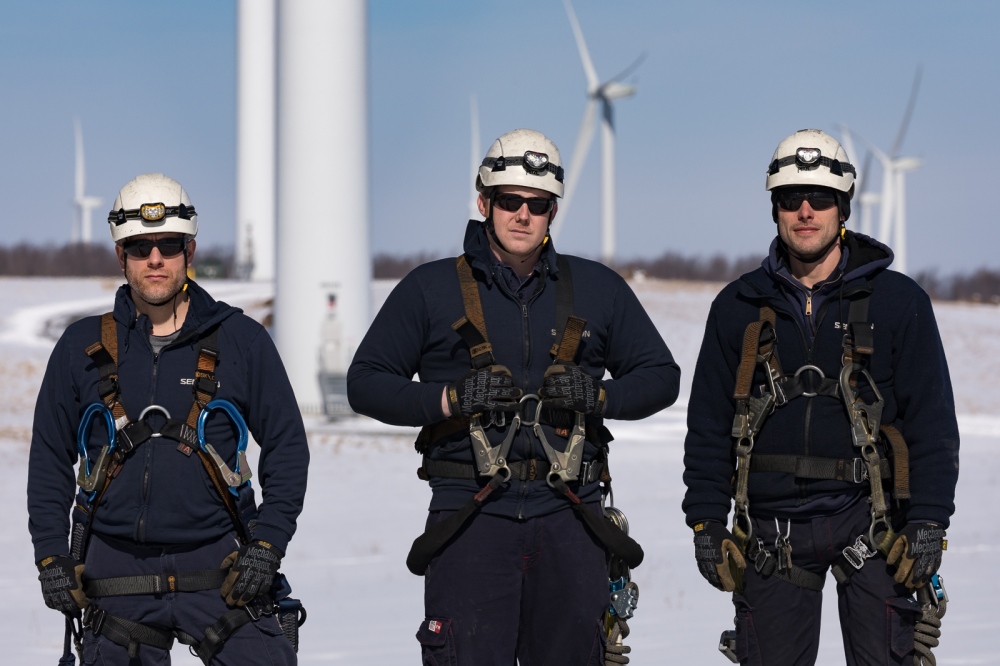 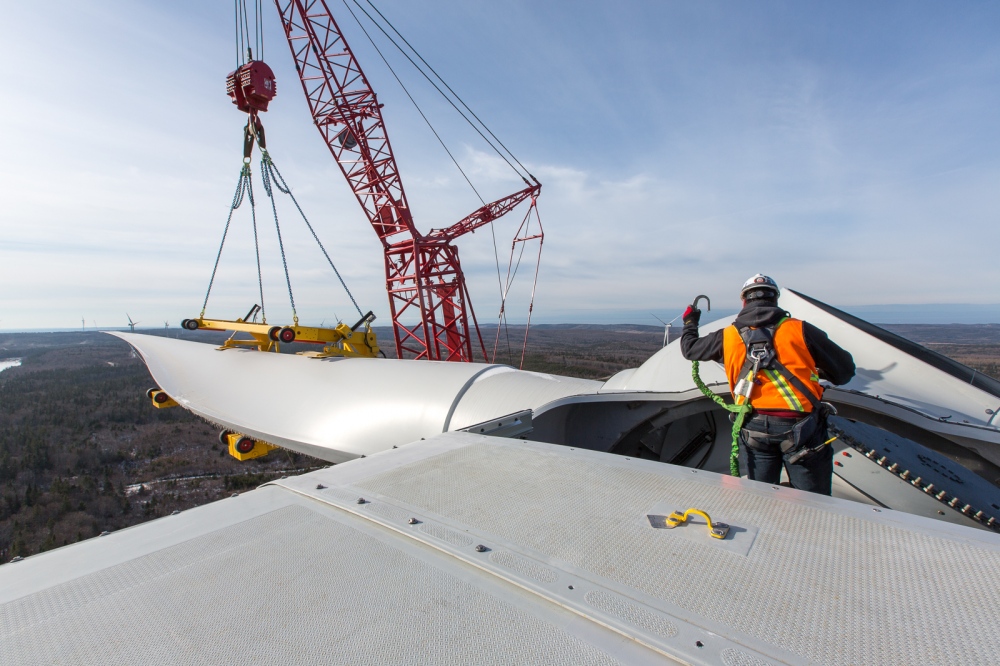 A millwright attaches his security harness to the rotor during installation of rotor blades on a wind farm in eastern Quebec. 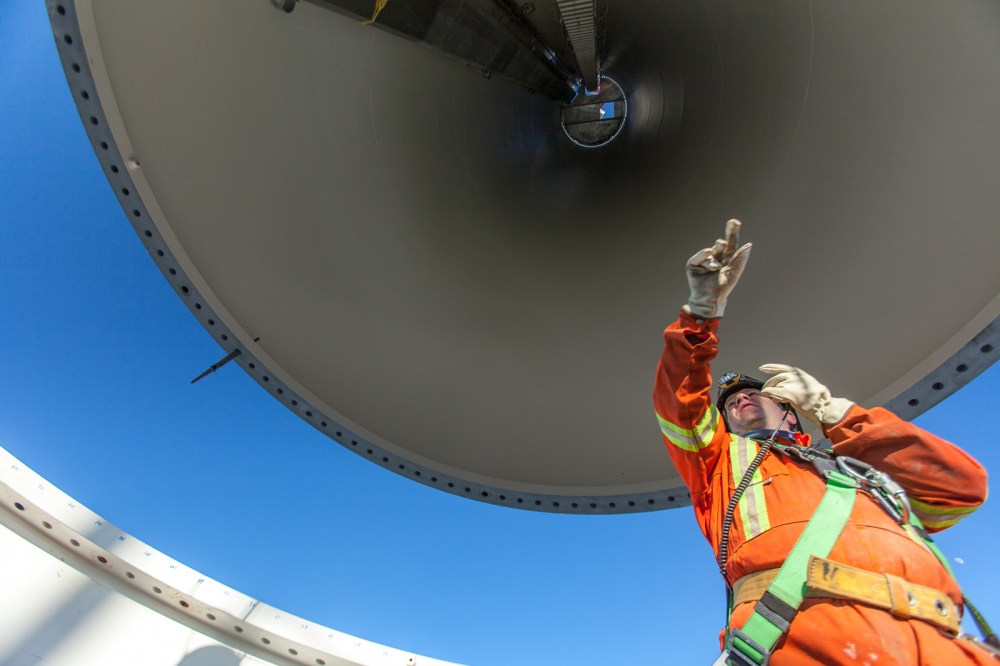 An ironworker communicates with a crane operator (not seen) by radio as the top section of a wind tower is lowered onto the mid section during construction of a wind farm in eastern Quebec. 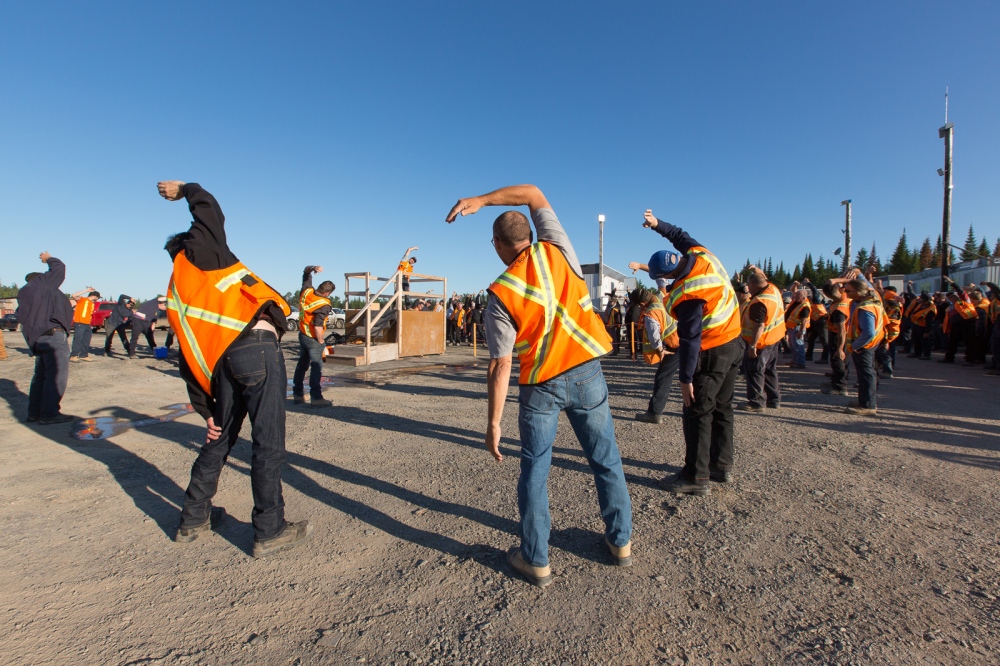 Mandatory stretch-and-bend exercises every morning at 6:30am on the construction site of Canada's largest community wind farm, Nicolas-Riou. 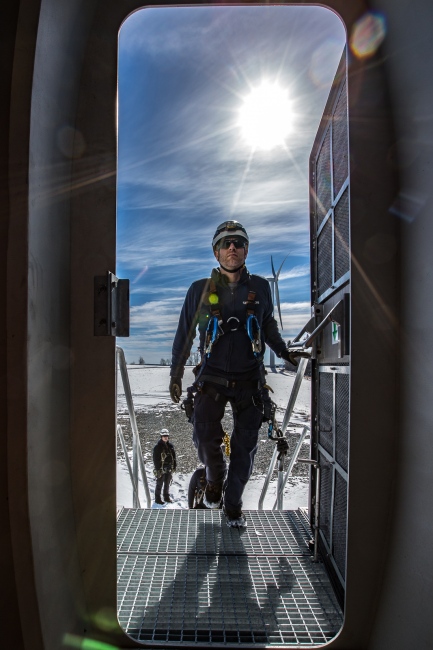 A wind technician enters the base of a wind turbine in upstate New York during an operations and maintenance check. 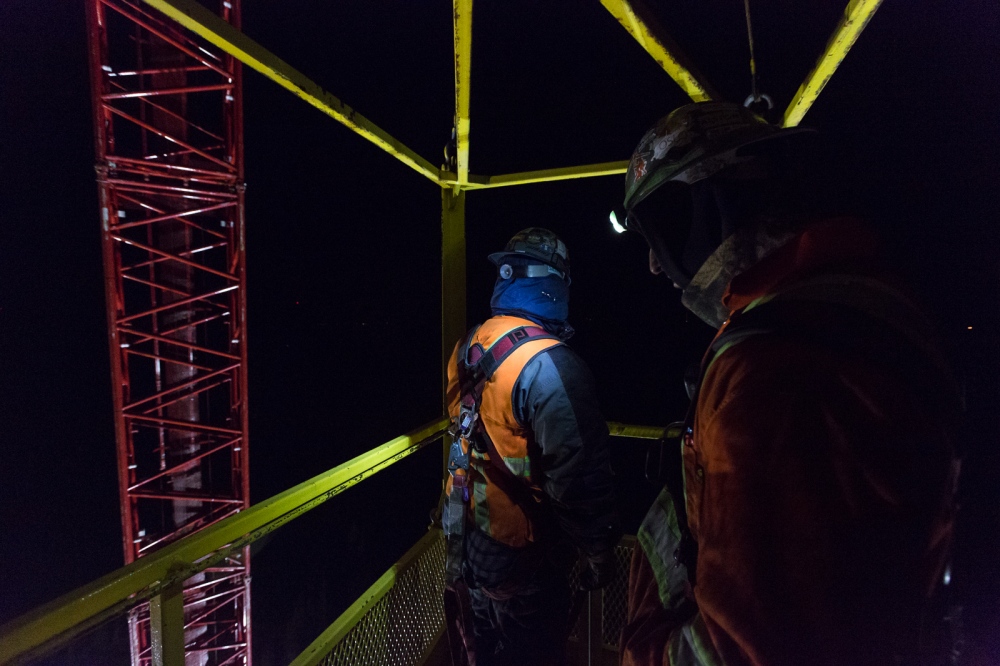 Construction workers in a cage being lifted by a crane during night construction of the Nicolas-Riou wind farm in eastern Quebec. 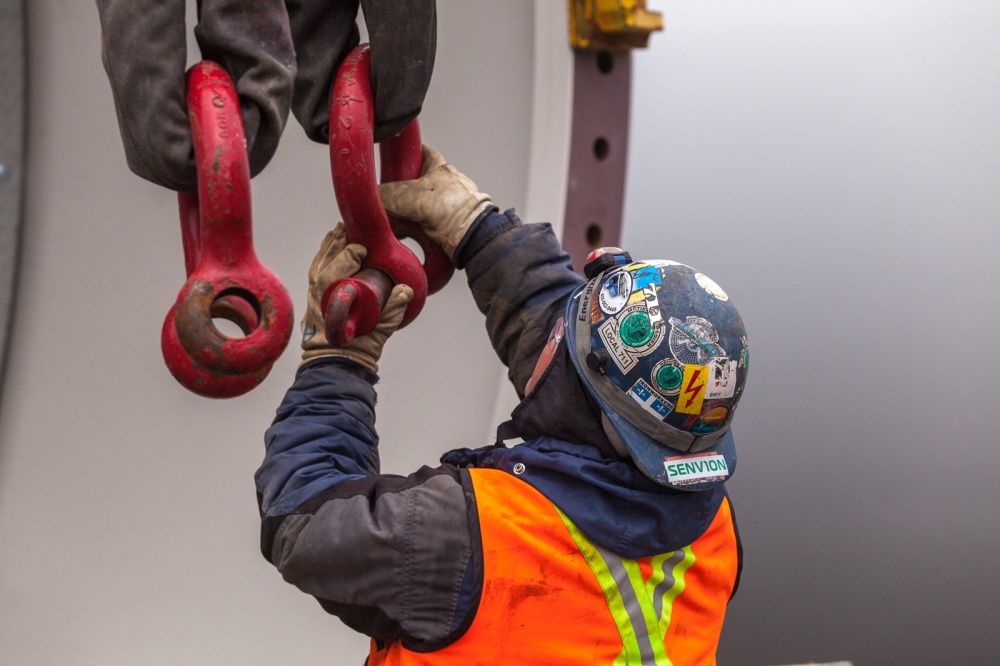 An ironworker prepares a wind tower for installation on the construction site of a wind farm in eastern Quebec. 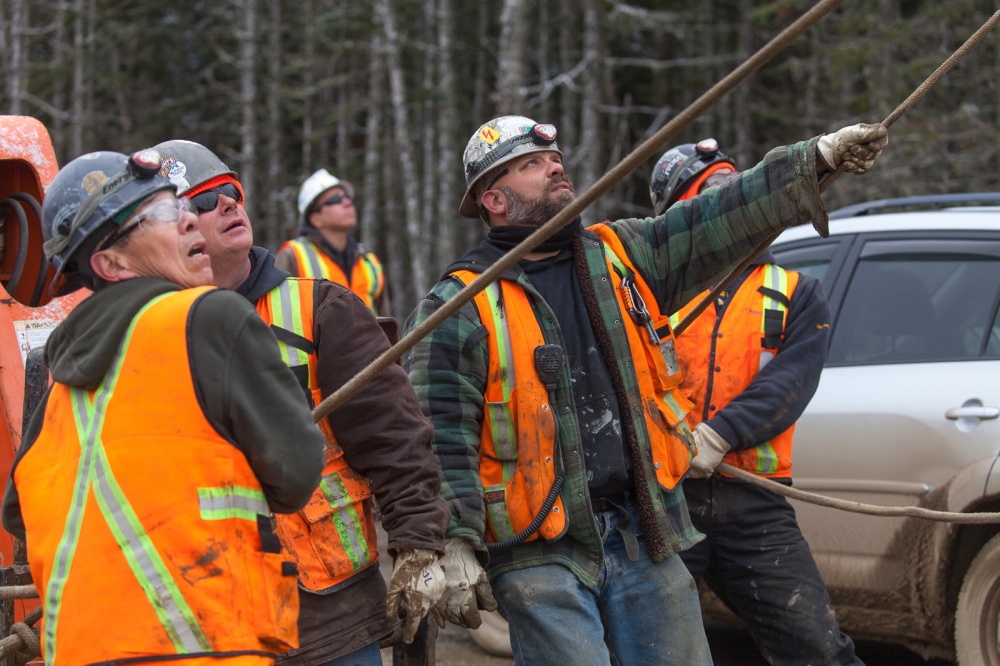 Ironworkers and millwrights pull cords to steady the installation of a nacelle during construction of a wind farm in eastern Quebec. 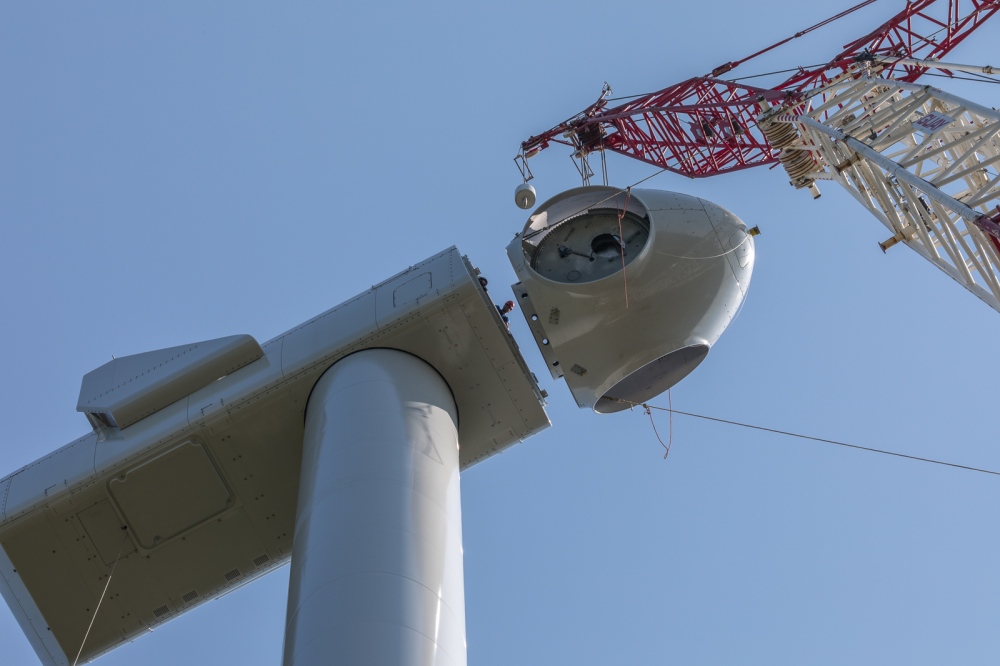 A Millwright leans out of a nacelle as a crane lifts a rotor for installation during construction of the Nicolas-Riou wind farm in eastern Quebec. 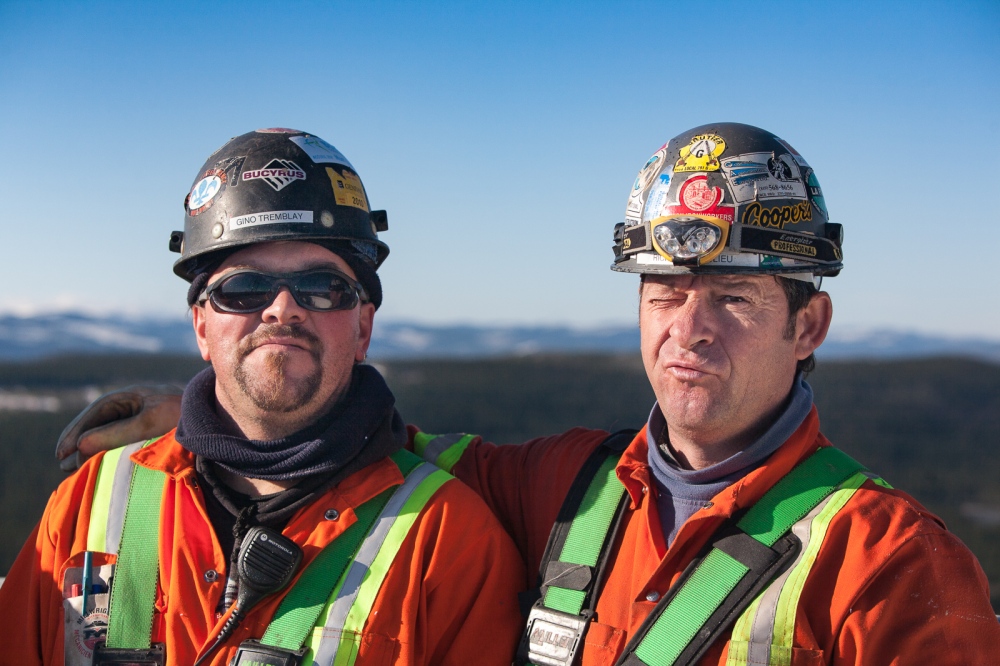 Two ironworkers pose for a photo while standing on the top of a wind tower during construction of the Mont-Louis wind farm. 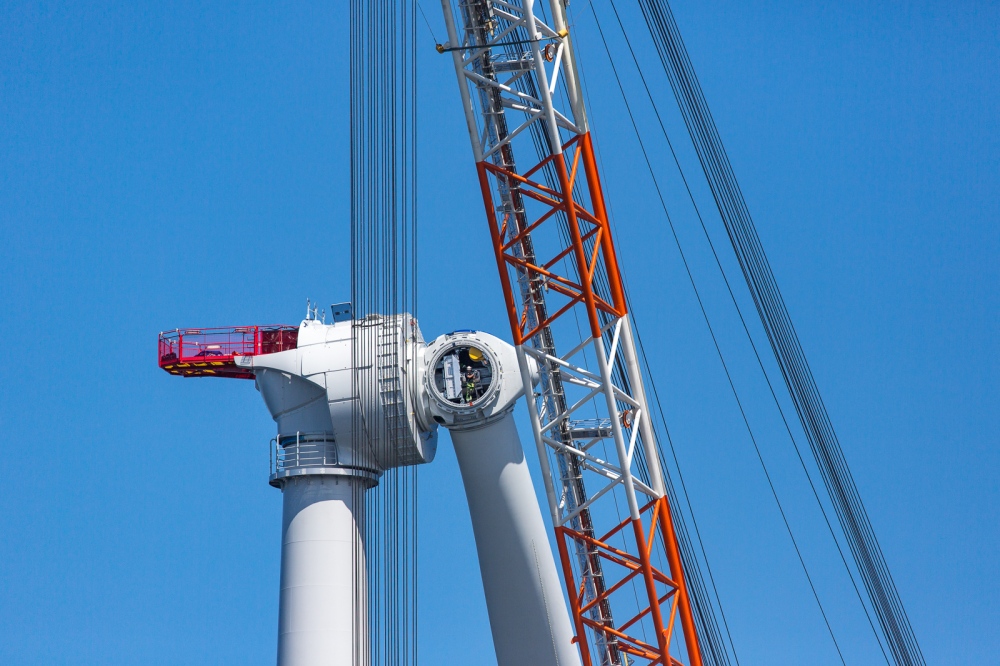 A wind technician standing in the rotor blade opening is dwarfed by a crane during construction of the Block Island Wind Farm in Rhode Island, USA. Photo by Joan Sullivan, 2016 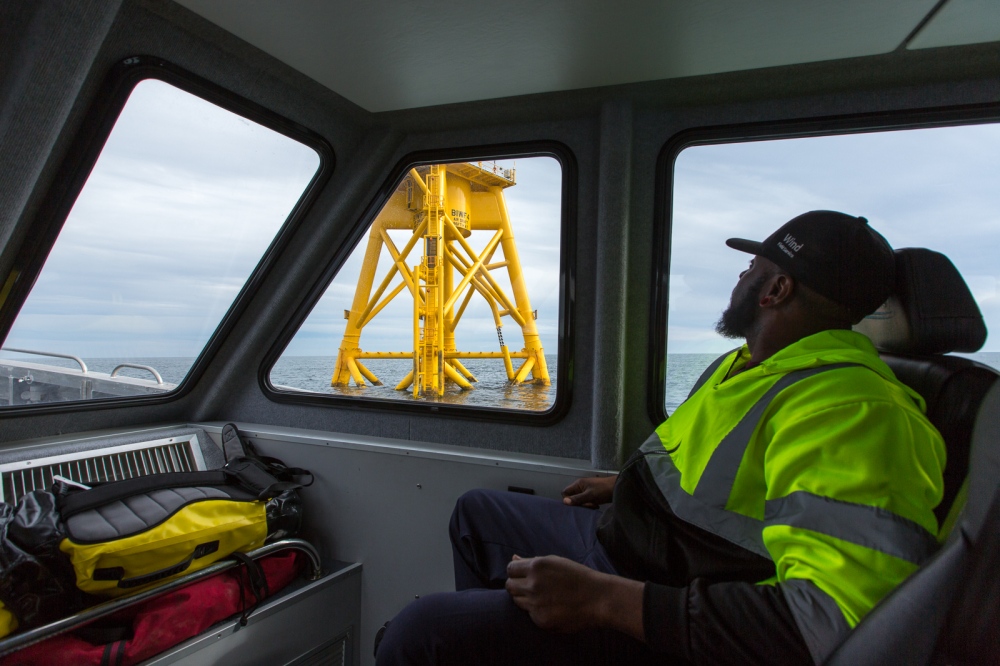 Wind technician arrives by boat to one of the five offshore wind turbines of the Block Island Wind Farm in Rhode Island. 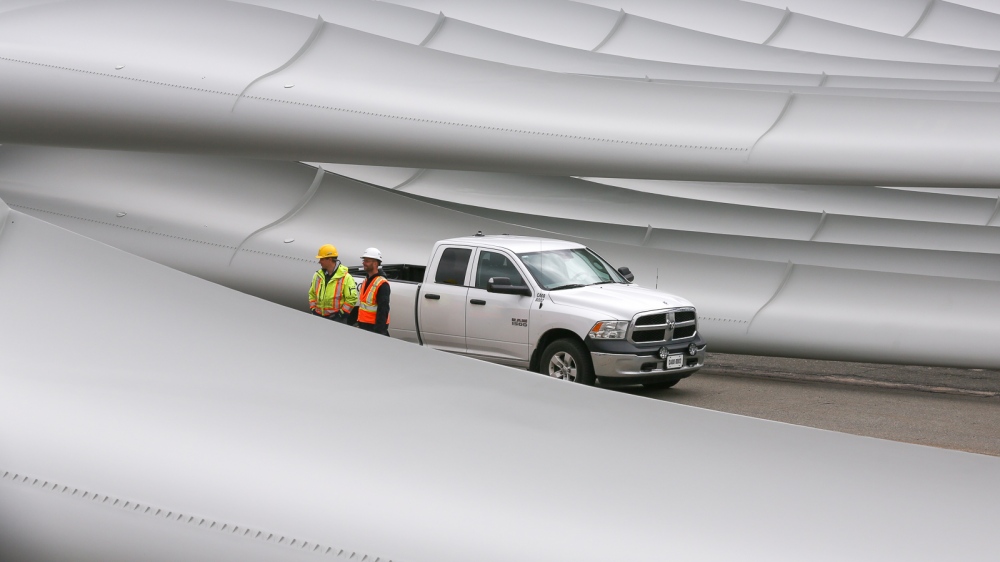 A sea of wind turbine blades appears to swallow two inspectors during offloading at the Port of Cacouna in Quebec. 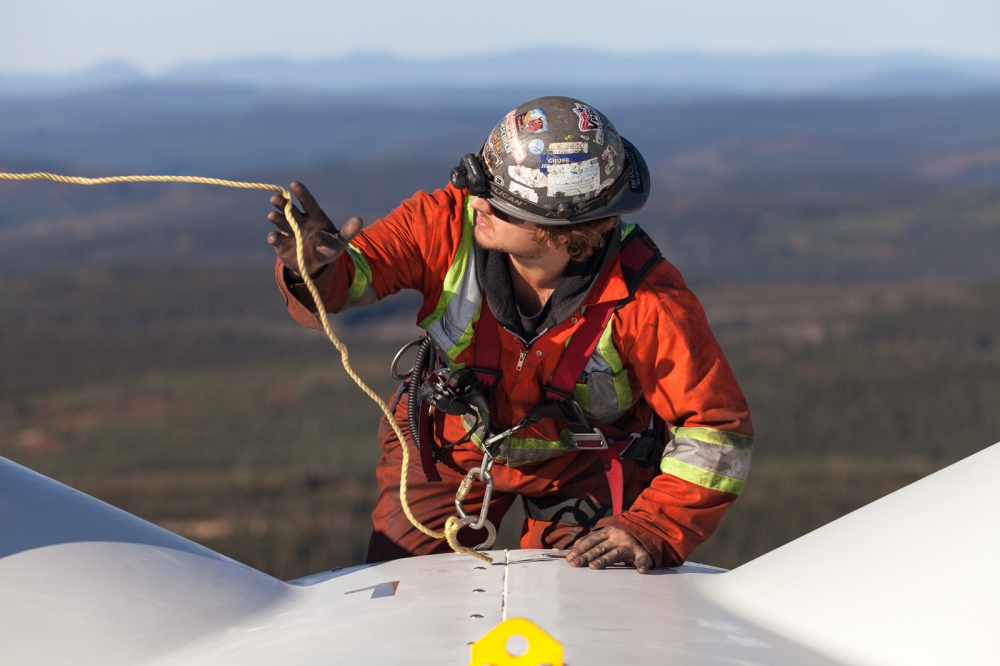 Standing in the nose of wind turbine's rotor, an ironworker releases the final cord after successful installation of a rotor assembly during construction of the Mesgi'g Ugju's'n wind farm. 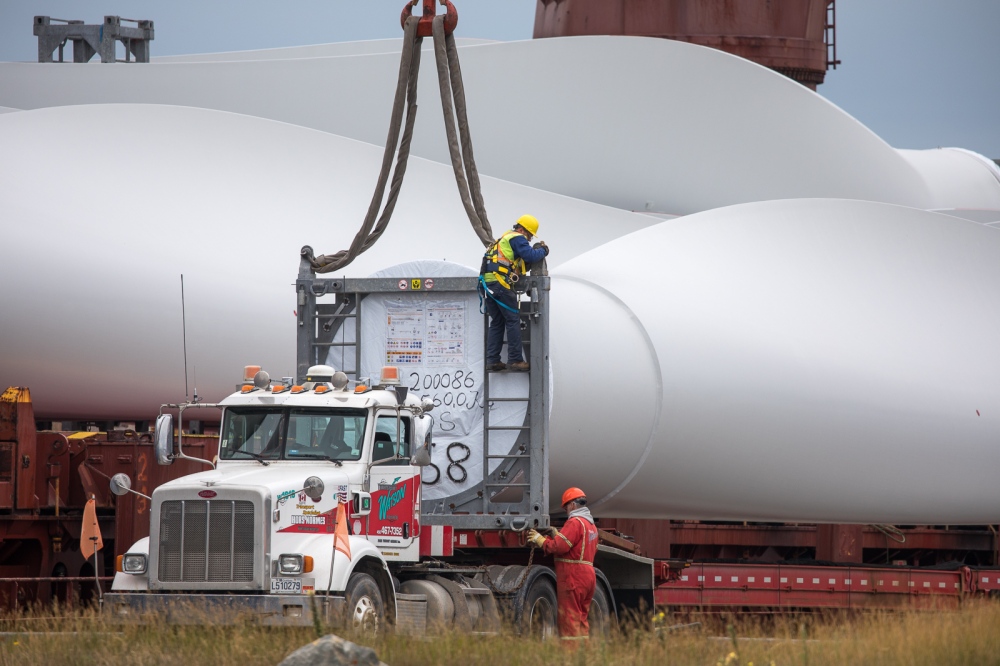 Wind blades being offloaded to a delivery truck at the Port of Cacouna in Quebec. 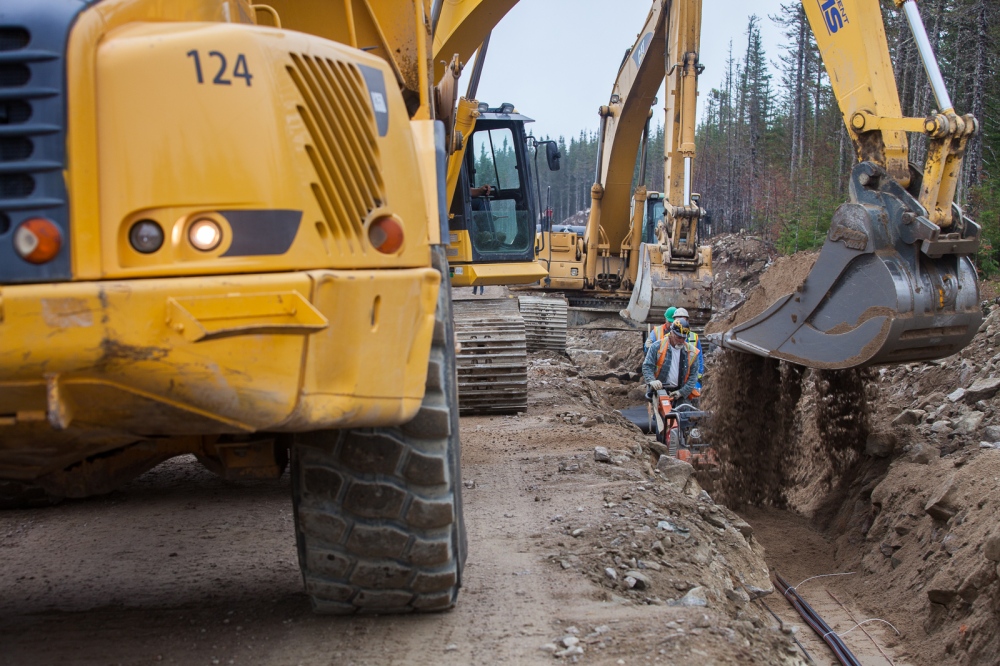 Three labourers are dwarfed by heavy excavation machinery as tons of sand are spread to bury and protect underground connector system during construction of the Rivière-du-Moulin wind farm in northern Quebec. 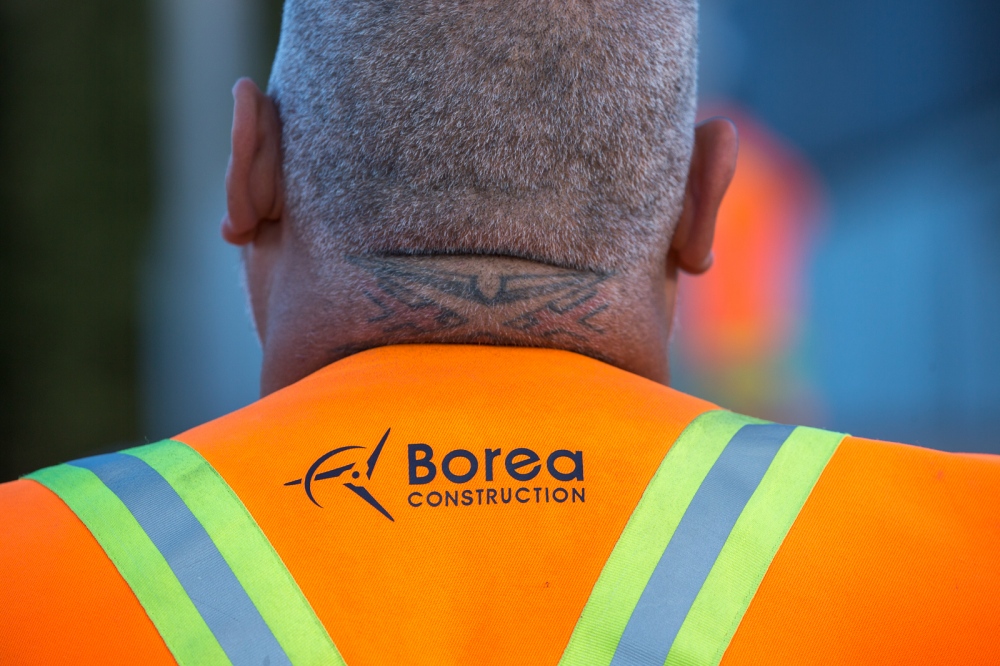 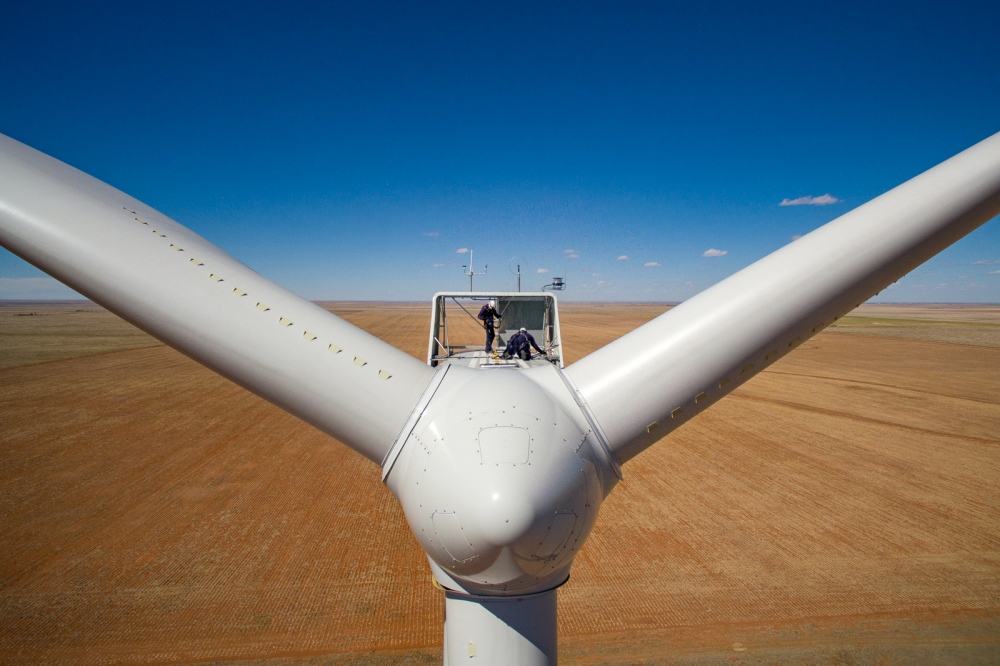 A close-up drone image of a wind turbine's rotor and blades in eastern New Mexico.

The shift to decarbonize our economy is not simply about replacing pipelines and power plants with PV panels. It is also about jobs, hundreds of thousands of newly created jobs. In Canada and the United States, many of these new jobs are being filled by laid-off fossil fuel workers disillusioned with the volatile boom-and-bust cycles of the oil and gas industry. The transition of energy workers from the tarsands to renewables, part of an irreversible global trend, has not yet been visually documented in Canada, where I live.

Over the next year, I will track a cohort of laid-off tarsands workers as they transition to new jobs on renewable energy construction sites across Canada. These journeymen/women - electricians, millwrights, ironworkers, carpenters - are literally building, with their own hands, our clean energy future. By focusing my cameras (DSLR, drone, video) on the people at the heart of this historic energy transition, I hope to shift the climate change conversation away from polarizing politics by drawing our attention closer to home: to the men and women, the mothers and fathers, the friends and neighbors who, against great odds, are already adapting to a rapidly changing world - perhaps better than the rest of us.

My portraits of these workers before-and-after their transition will serve as a metaphor of the global energy transition to which we are all witnesses, but which some refuse to see. I celebrate the talented men and women building the clean energy infrastructure required to meet our Paris climate commitments. Without them, the technical solutions to climate change would not be rolled-out, from distributed energy to cleantech to electric transport.

This project builds upon 10 years experience photographing the construction of some of North America's largest utility-scale wind and solar projects. For this project, I have partnered with Iron and Earth, a non-profit organization based in Alberta (the heartland of Canada's oil and gas industry) that is dedicated to helping Canada's oil, gas, coal and indigenous workers obtain the skills required to transition to clean energy jobs. One of the planned outcomes of this partnership is a pan-Canadian art exhibit that will be held in each province. At the opening of each exhibit, the workers who were photographed from that province will be invited to share stories about their personal transition with the general public. By sharing their own stories, these workers become the human face of the global energy transition.

By Joan Sullivan — Having spent the last decade focused 100% on documenting the energy transition, I had somehow convinced myself that I was immune to feelings of..
Mar 25, 2020

By Joan Sullivan — In 2016, I was invited to Germany by Clean Energy Wire for a media study tour to learn more about Germany's energy transition, Energiewende ...
May 1, 2019