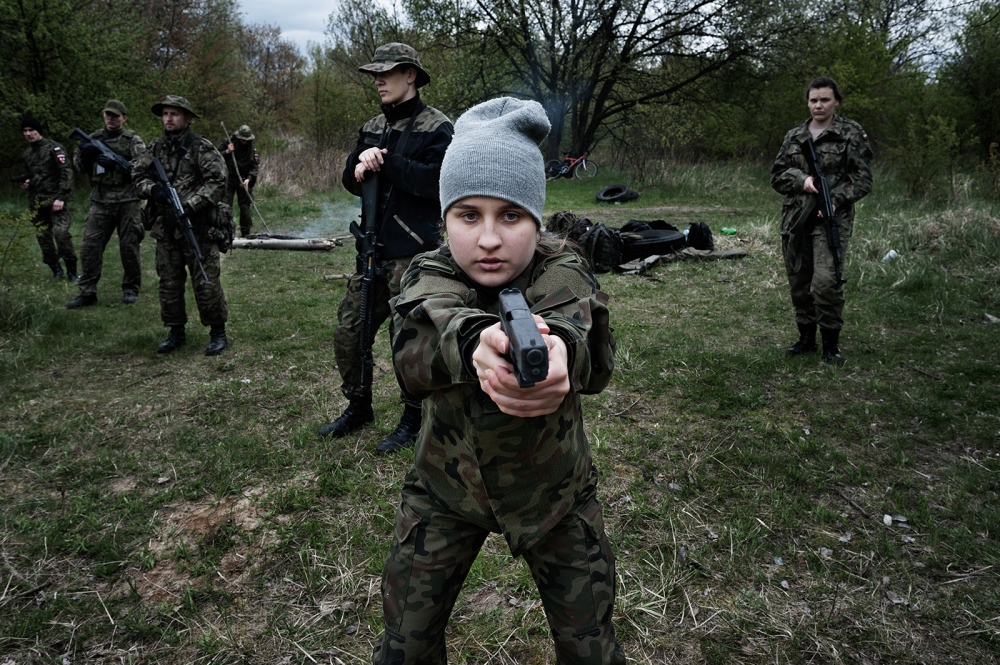 1 of 17 © 2021 Hanna Jarzabek
One of the students (16 years old) during practical activities carried out by the paramilitaries in the public high school in Brzeg. Skarbimierz/Brzeg 2017
In Poland the first military classes were created in 1999, but only starting from 2014 the program began to arise greater interest among youth. The classes are aimed at teenagers between 16 and 19 years old, although some of the schools allow enrolling at the age of 13. The program considered as a “pedagogical innovation” is developed within the framework of the subject Education for Security. As such it is not officially recognized by the Ministry of National education, but enjoys an increasing tutelage of the Polish Army; especially since the ultra-conservative Law and Justice Party came to power in Poland in October 2015. 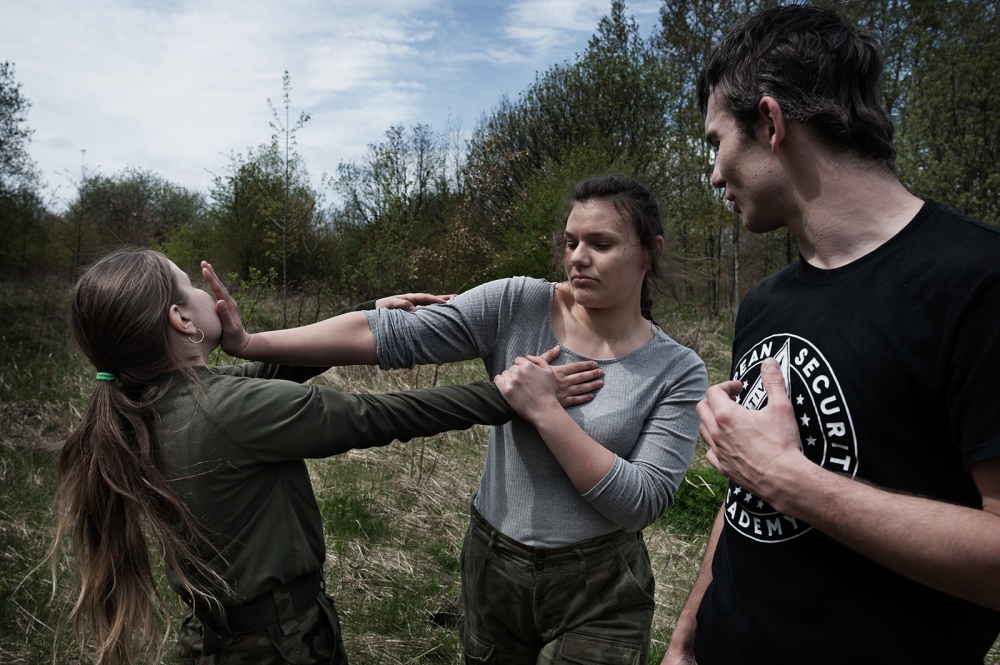 2 of 17 © 2021 Hanna Jarzabek
Students from the high school in Brzeg learn Krav Maga moves with inspector Kamil Zielinski of Unit 3060. Krav Maga is a martial art used by the Israeli defence and security forces. Zelinski is a former soldier, currently employed by a security firm, whose name he did not wish to disclose, but is comparable to Blackwater. Skarbimierz/Brzeg 2017 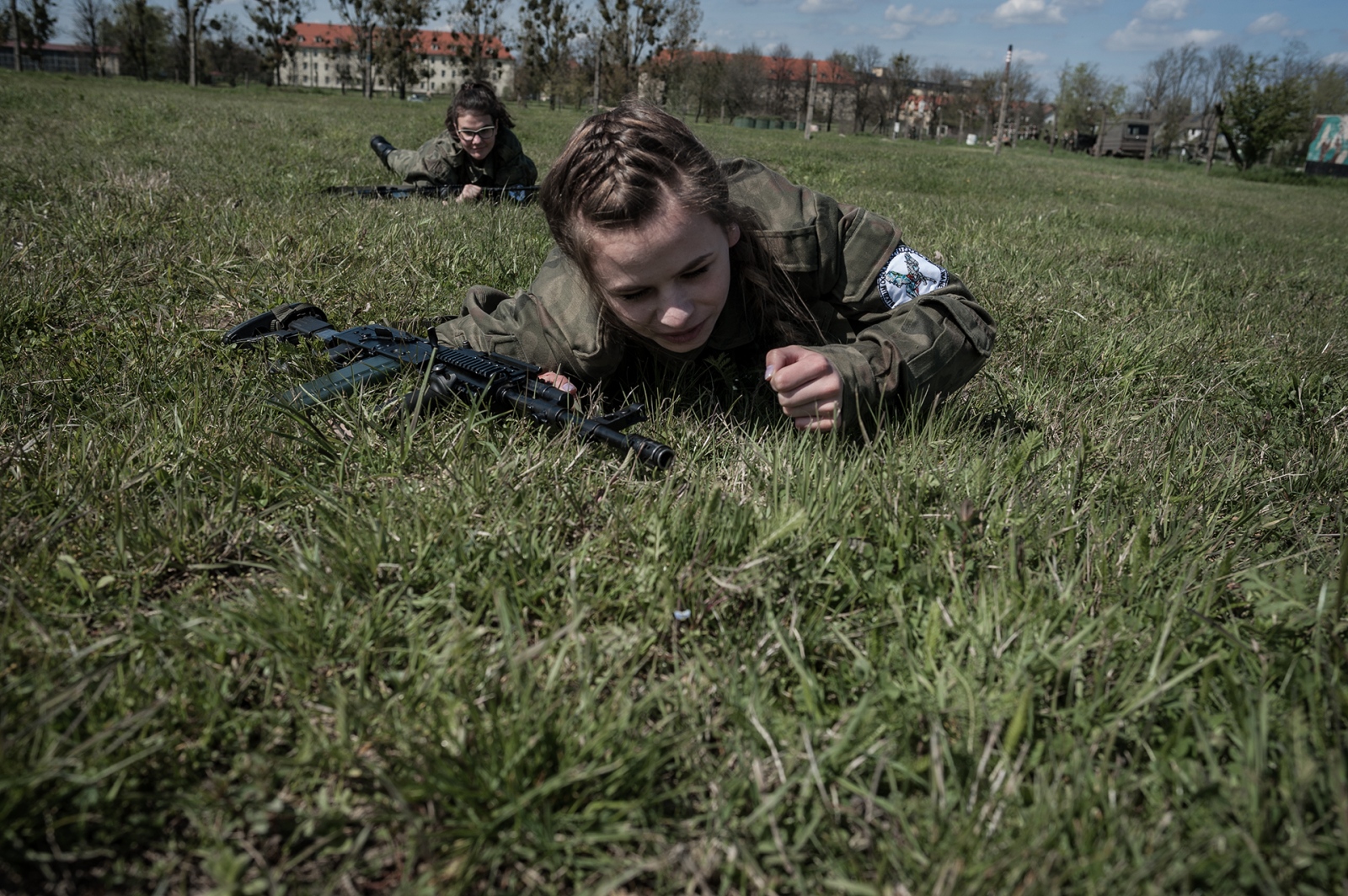 3 of 17 © 2021 Hanna Jarzabek
One student (16 years old) from the II Public High School in Brzeg during practical activities carried out by the Polish Army within the frame of a “Military Profile Classes”. During those activities students handle real weapons and shoot with real ammunition. Brzeg 2017 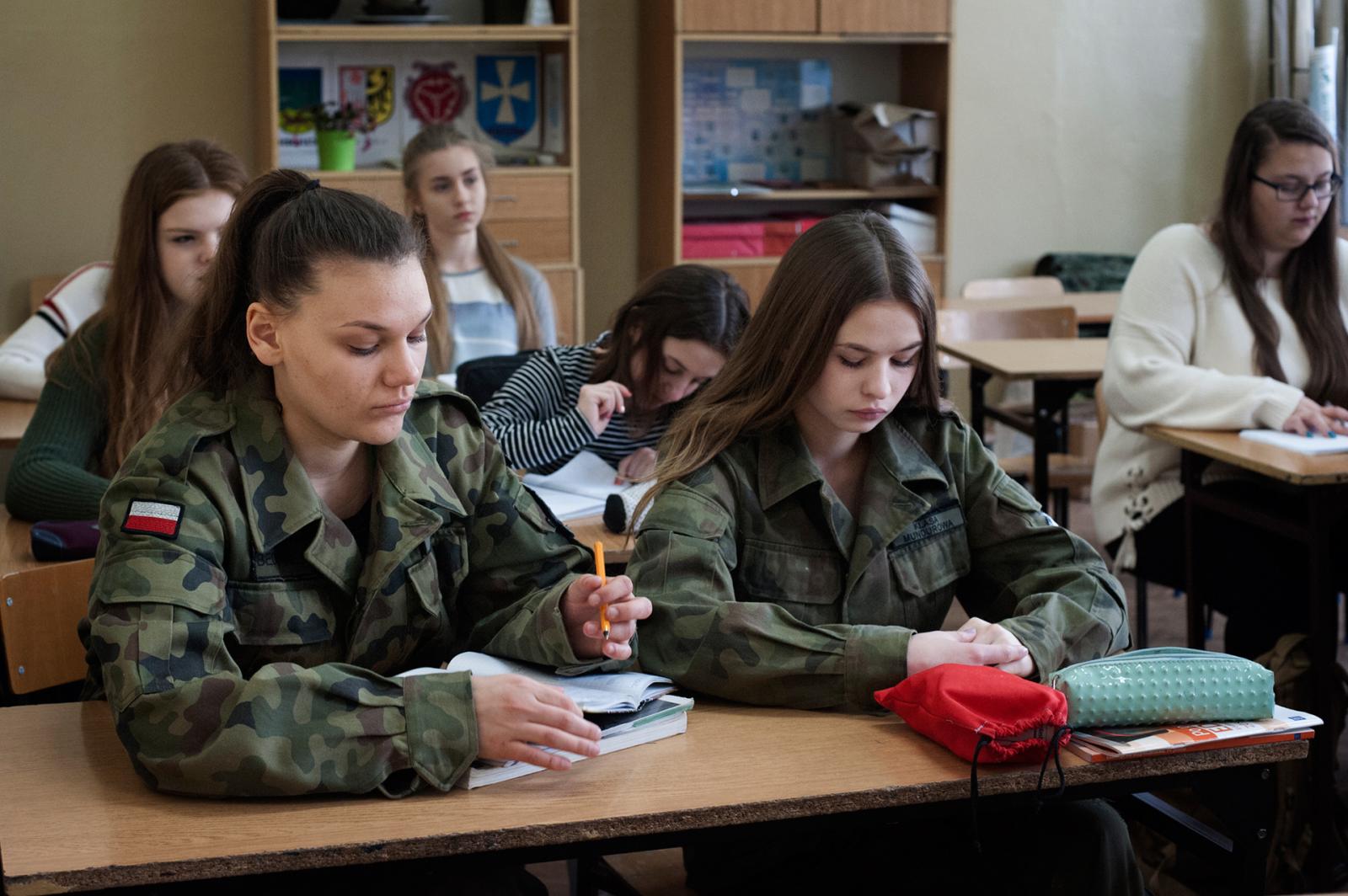 4 of 17 © 2021 Hanna Jarzabek
The 17 years old students during the history class, the II Public High School in Brzeg. The students who chose "military profile" attend the same classes as those from “Humanist Profile”, with the difference that twice a week they have to wear army uniforms. Brzeg 2017
“Here, no matter how much you study, if you don’t have contacts you will not find a job” – says Paulina, one of the students aged 17 – “Many people go abroad, like my cousin, and do not plan to return. If I could have built this country from scratch, work would have been my priority.” 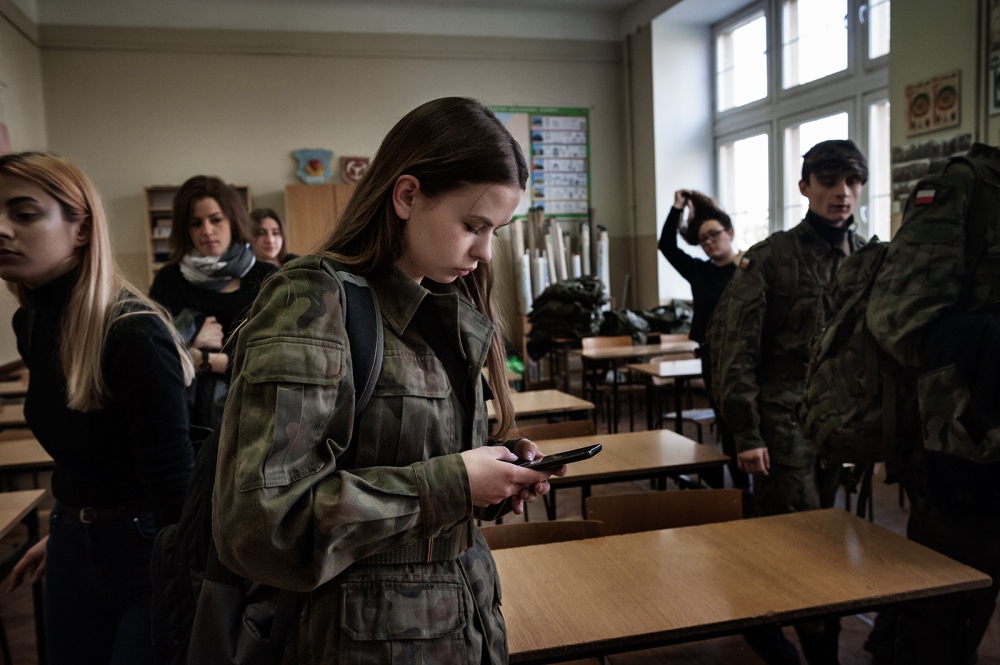 5 of 17 © 2021 Hanna Jarzabek
The 17 years old students after the history class, the II Public High School in Brzeg. Brzeg 2017
One of the objectives of the program is to strengthen patriotic awareness among students. Patriotism, in the sense of the moral obligation to defend the homeland, is reaffirmed today in Poland as the supreme value. The Government links national identity to religion, emphasizing Christian values even in the Army. In parallel, more liberal ways of life are considered an immoral imposition from the West. Many professors and instructors also point to religion, taking “God, Honor and Homeland” for their motto. 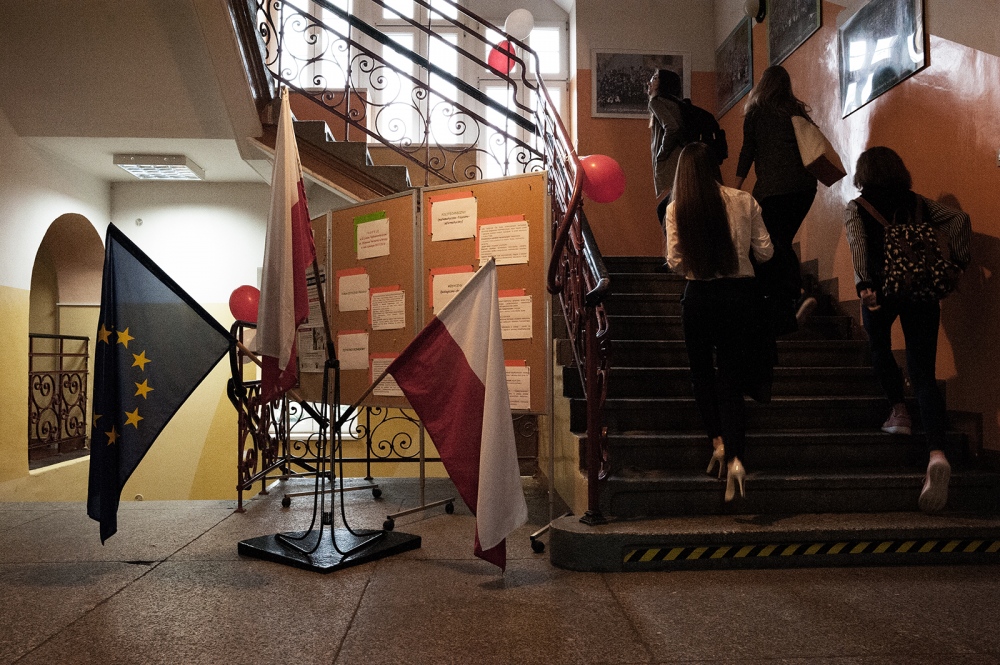 6 of 17 © 2021 Hanna Jarzabek
The II Public High School in Brzeg, ne of the 560 schools that propose Military Profile Classes. Brzeg 2017
“Currently it is estimated that there are around 560 schools in Poland that has military classes in its offer, which corresponds to 57,000 students, but no one has exact data.” – says one of the employees (who preferred to remain anonymous) of the company Sortmund, specializing in the delivery of uniforms for most of the uniformed services in Poland and schools offering this type of education. 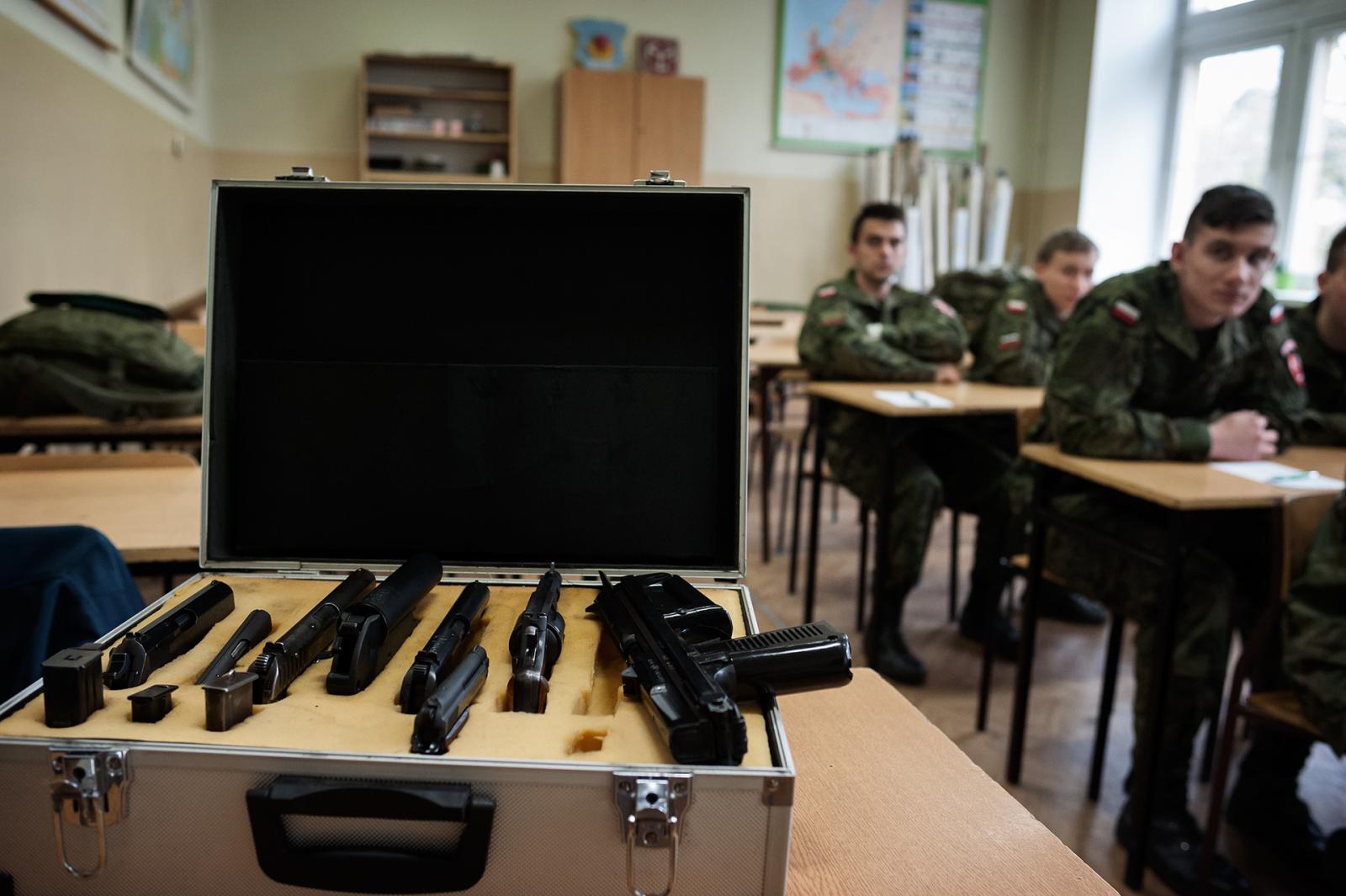 7 of 17 © 2021 Hanna Jarzabek
Students from the public High School in Brzeg during the military training under the supervision of the paramilitary Unit 3060. Brzeg 2017 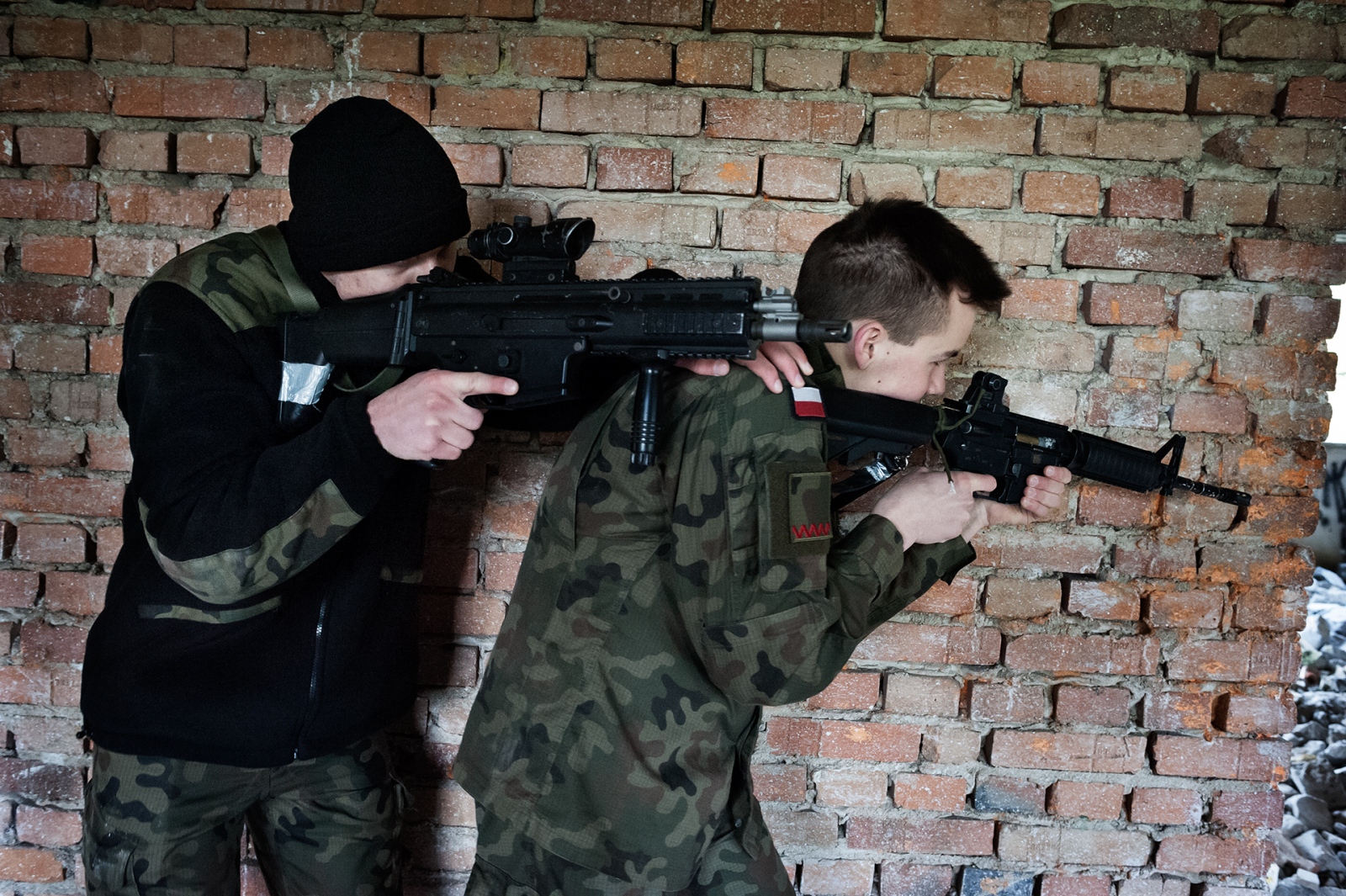 8 of 17 © 2021 Hanna Jarzabek
Students (16-19 years old) learn combat tactics in urban areas under the supervision of a paramilitary organization (Unit 3060). Skarbimierz/Brzeg 2017
“Children will play war anyway. When they are in a sandbox for example, they would play with sticks if they don’t have toy weapons, so it is obvious they have this need.” (Malgorzata Baranowska, the history professor responsible for military classes at school). 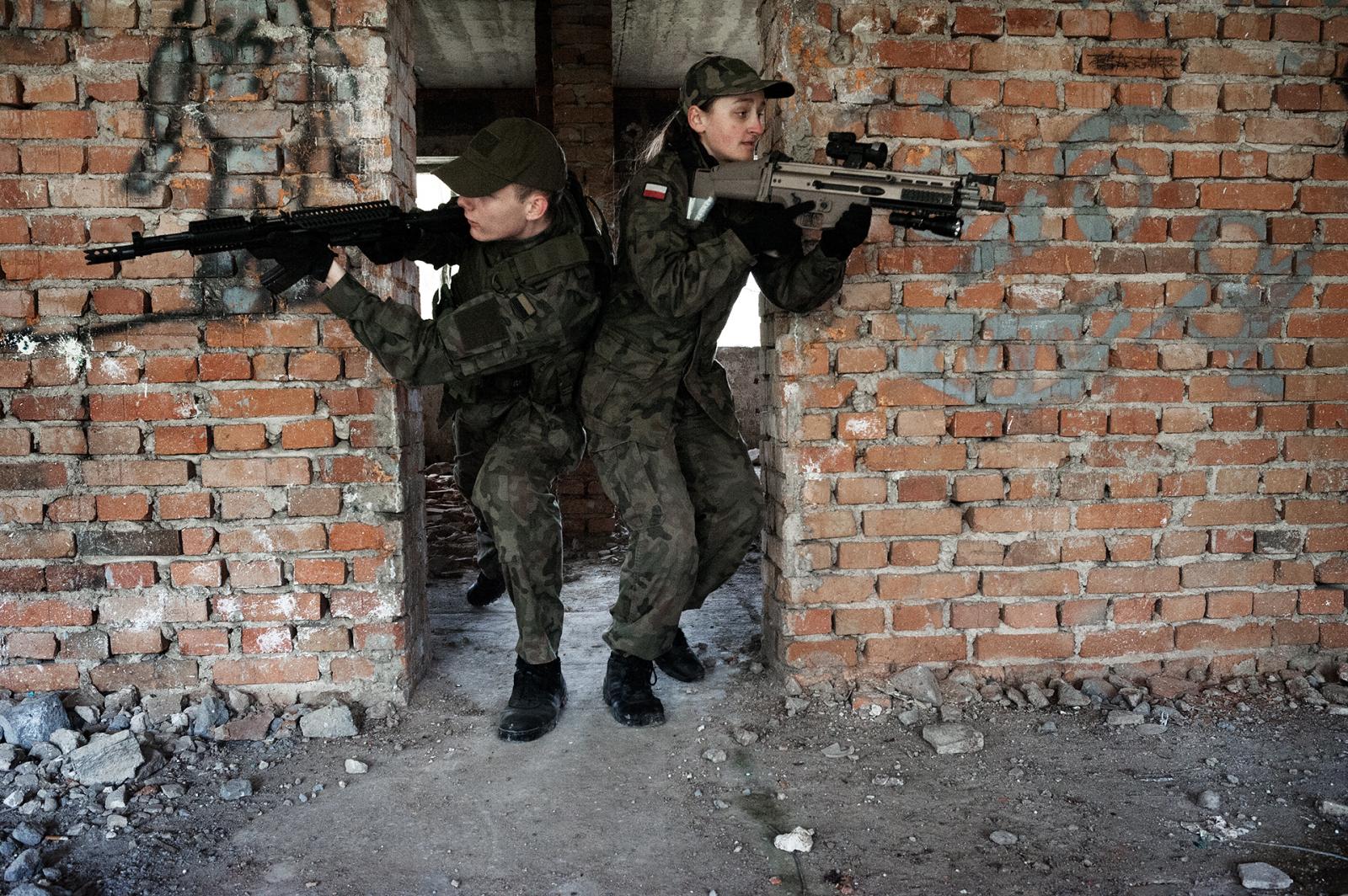 9 of 17 © 2021 Hanna Jarzabek
Students (16-19 years old) learn combat tactics in urban areas under the supervision of a paramilitary organization (Unit 3060). Skarbimierz/Brzeg 2017
The paramilitaries freely decide the type of activities they carry out with the students: from first aid, topography, physical education and military training to survival camps and combat tactics.
“The objective of our program is to prepare students in general. They learn things that can be useful in life. Maybe not everyone would like to be a soldier in the future; maybe they will chose something else. But at least they will have an acquired experience. I think everyone should know how to use weapons. Owning one is an individual matter. There must be some kind of rules, of course, but it should be facilitated rather than hindered.” (Sebastian Lipinski, the instructor in charge of the Unit 3060). 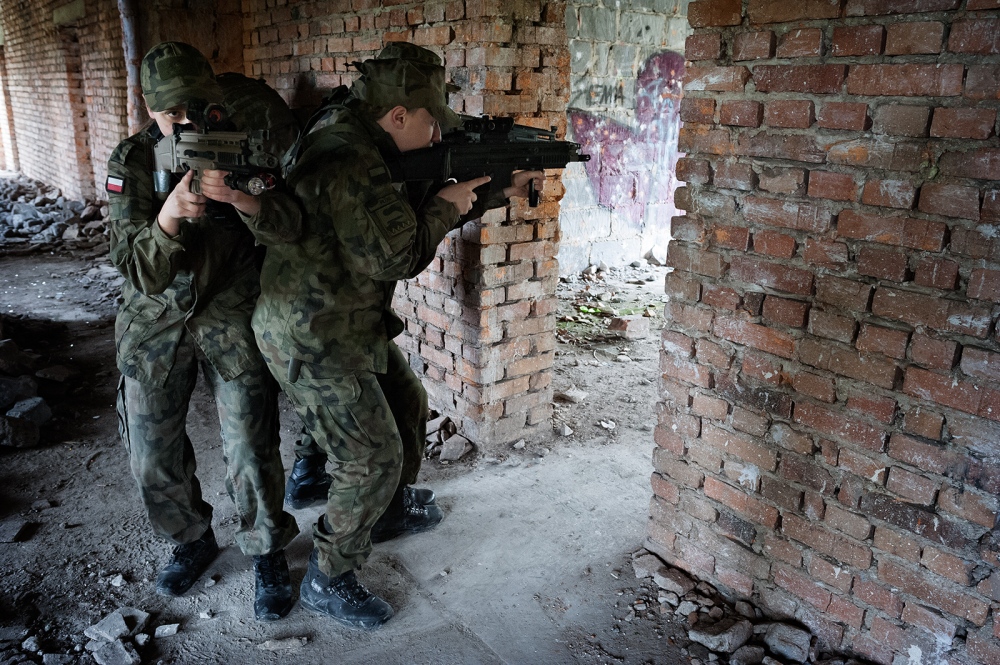 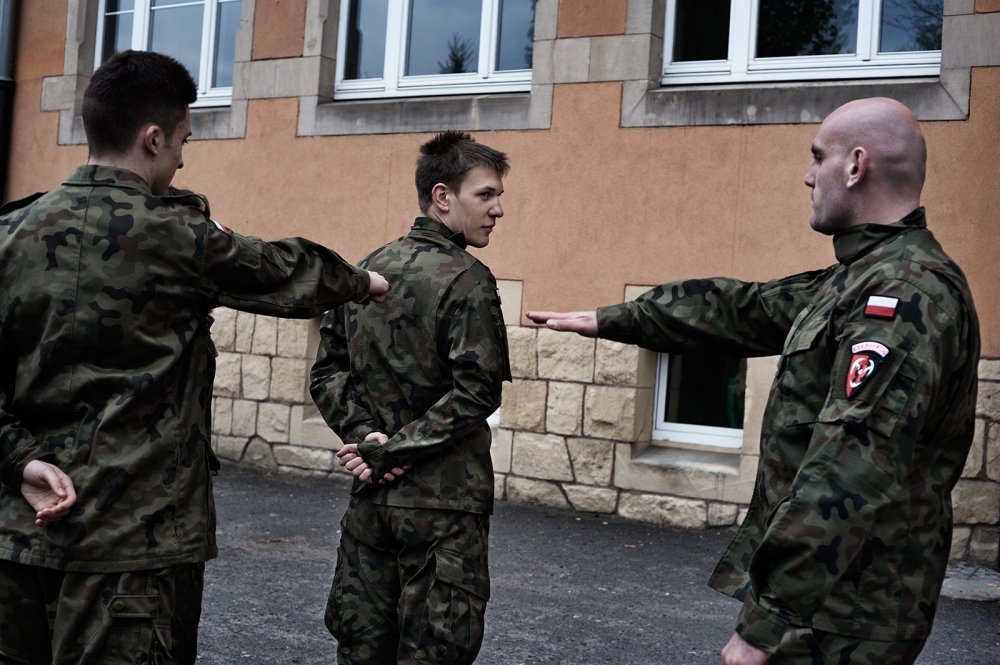 11 of 17 © 2021 Hanna Jarzabek
Students from the public High School in Brzeg during the military training under the supervision of Sebastian Lipinski, the instructor in charge of the Unit 3060. Brzeg 2017
“The discipline and military training are very important. The values we want to convey are summarized in three words: God, Honor and Fatherland. We promote integrity by taking the extinct Unbreakable Soldiers as an example. Each student chooses his referent, learns his biography and puts his nickname of war on the uniform.” (Sebastian Lipinski)
The Unbreakable Soldiers (also called Damned) were members of the National Army, the armed wing of the Polish secret State during the Second World War. Persecuted by the communist regime, today they are elevated to the rank of national heroes. However, some were directly involved in murders of Polish civilians of Belarusian origin – crimes that took place in northeastern Poland 70 years ago. Many Poles avoid talking about these issues, while current governmental instances minimize the magnitude of those events or question the veracity of some testimonies. 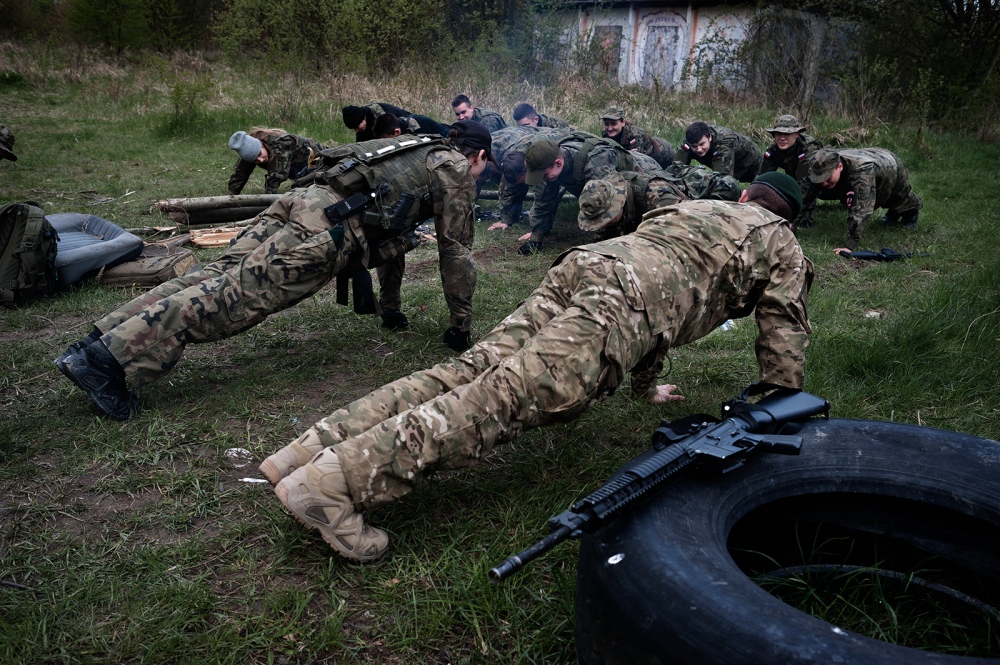 12 of 17 © 2021 Hanna Jarzabek
A group of students undergoing training with two instructors from Unit 3060, a paramilitary organization set up in 2015 (with High School II in Brzeg as its legal headquarters). The Unit operates as an independent body, and its instructors are soldiers or former soldiers. Skarbimierz/Brzeg 2017 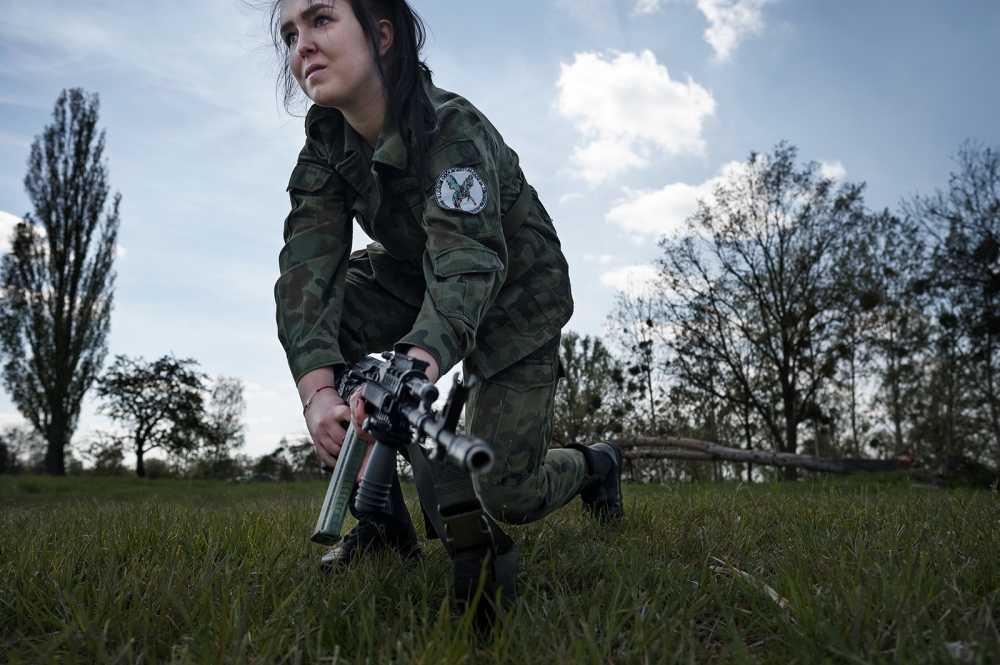 13 of 17 © 2021 Hanna Jarzabek
A 17-year-old girl from the military education course during manoeuvres with the Army. The students use real firearms during these manoeuvres. In June 2017, High School II in Brzeg was selected by the Ministry of National Defence to pilot a programme aimed at standardising military education throughout the country. The main objectives of the programme are to train future national military reserves, to foster patriotism and ensure combat readiness. Brzeg 2017 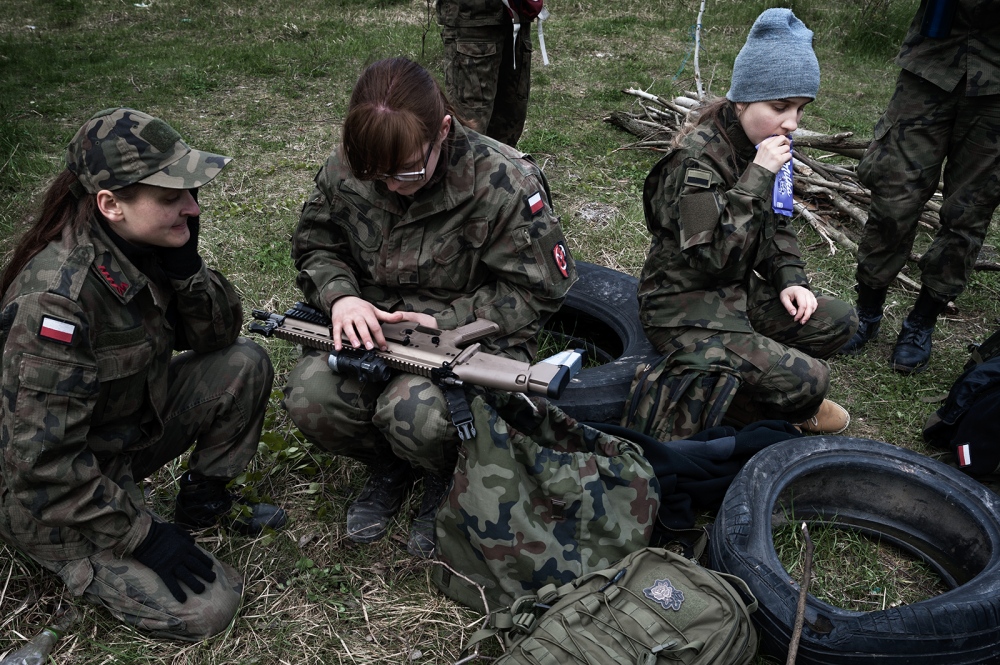 14 of 17 © 2021 Hanna Jarzabek
Students between 16 and 19 years old rest after the practical activities carried out by a paramilitary organization within the frame of a “Military Profile Classes” program in the public high school in Brzeg. Skarbimierz/Brzeg 2017
“Outside the school I also run activities and camps for both, youth and children. When it comes to age at which someone should start to learn how to shoot, it is a very individual matter. Some kids are intelligent enough to get it at 10 years old, while others even at the age of 16 cannot comprehend it. But I think that 16 years old is an optimal age. I have sometimes been criticized that I teach children how to shoot. But it was a small group of people and the vast majority of parents are just delighted.” (Sebastian Lipinski, the instructor in charge of the Unit 3060). 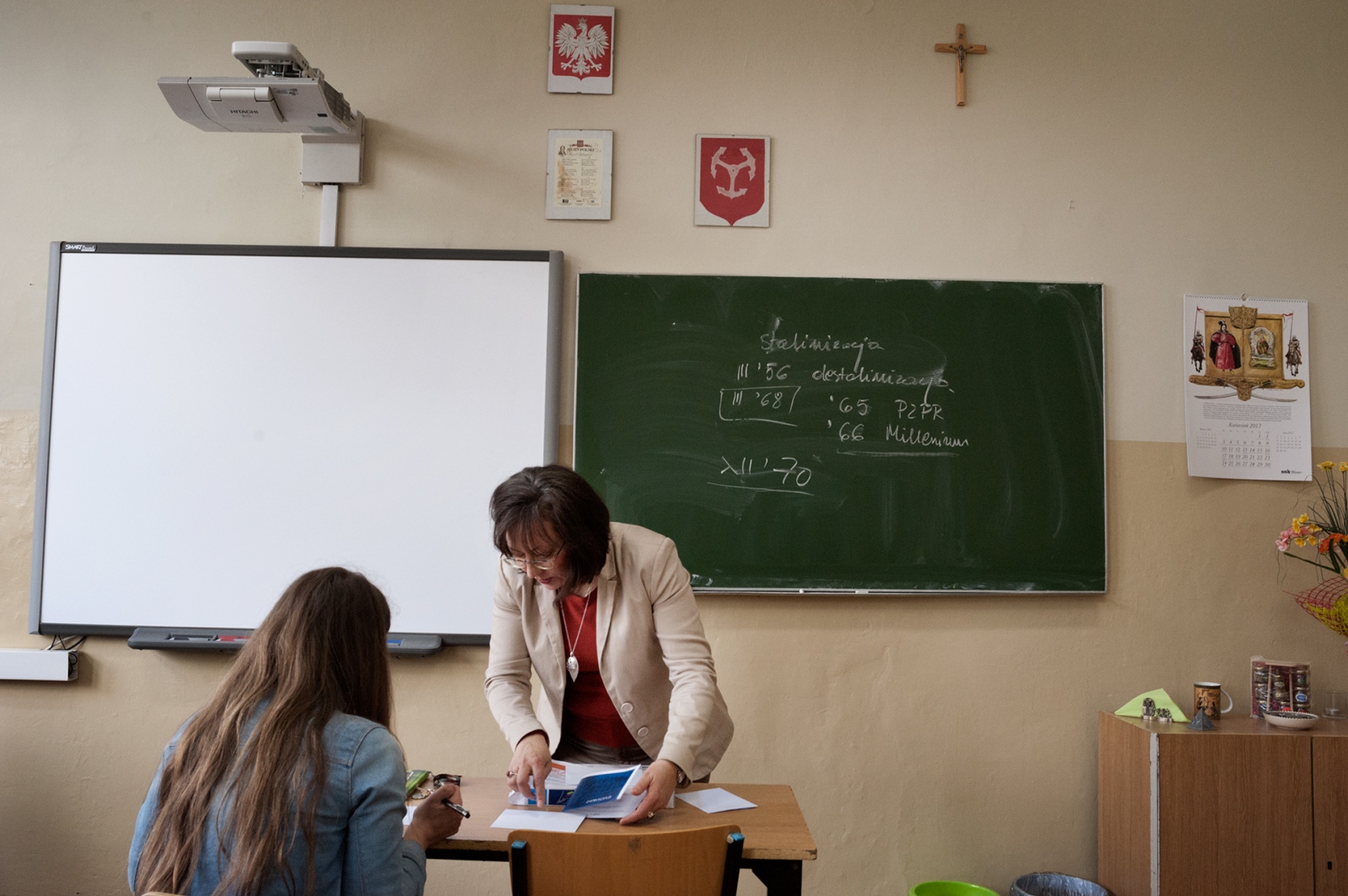 15 of 17 © 2021 Hanna Jarzabek
Malgorzata Baranowska, professor of History and of the Education for security subject. In 2011 she implemented the military classes (also called uniformed classes) in the II Public High School in Brzeg. She was also one of the main promoters of the Unit 3060, a paramilitary organization with which collaborates now the school. Brzeg 2017 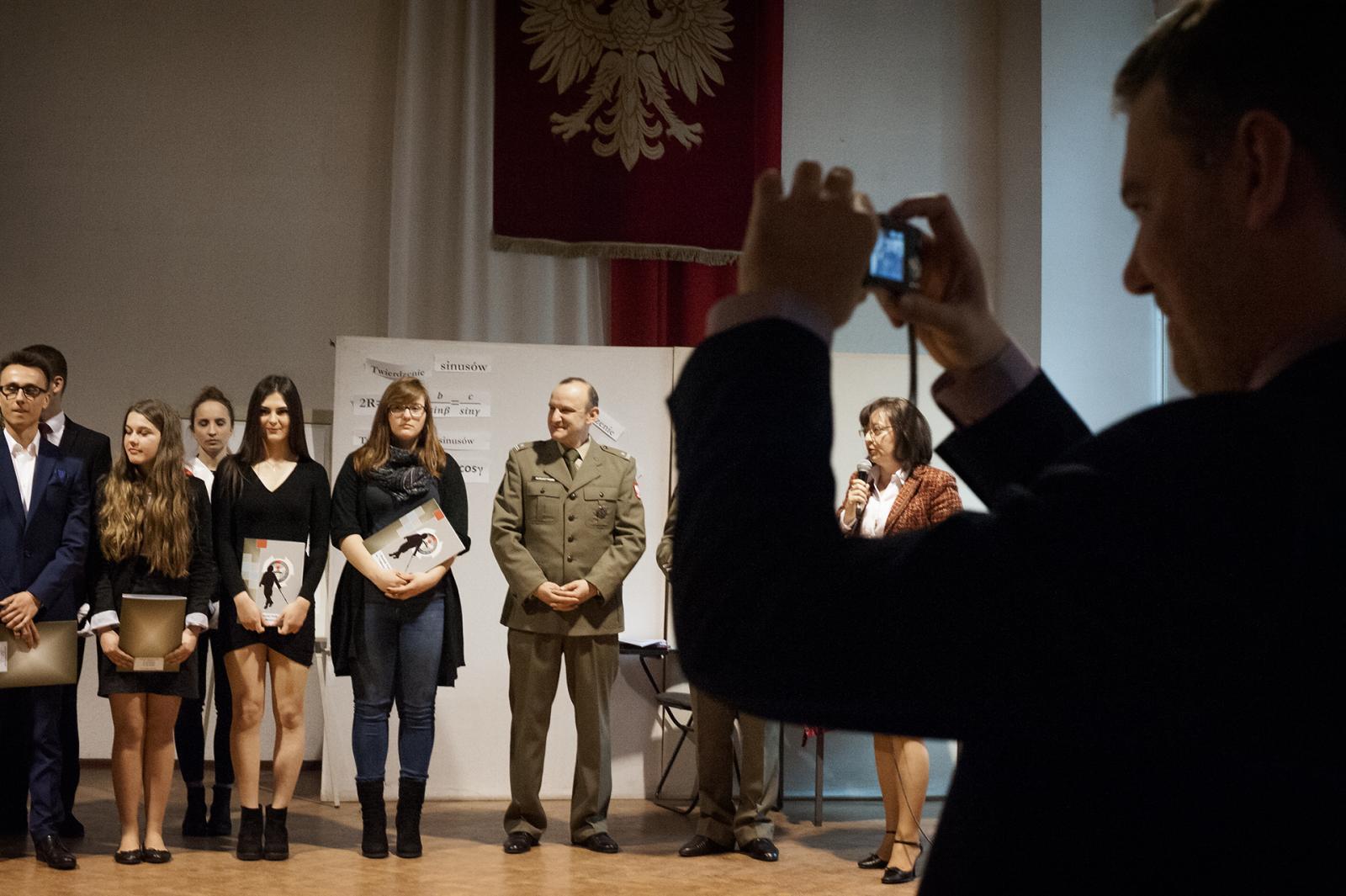 16 of 17 © 2021 Hanna Jarzabek
Diplomas delivery oceremony in the II Public High School in Brzeg. Brzeg 2017
“The most urgent thing in Poland is to rebuild the national identity. We have moved far away from religion and patriotism. We have developed a more western lifestyle, based on individualistic logic and consumerism. It is necessary to return to the Christian roots and develop more community-oriented behavior. The West cannot impose its values on us. We are the owners of this country and we are the ones who should dictate the rules here”- Szymon, a 18 years old student from the second year of “Military Profile Classes” program. 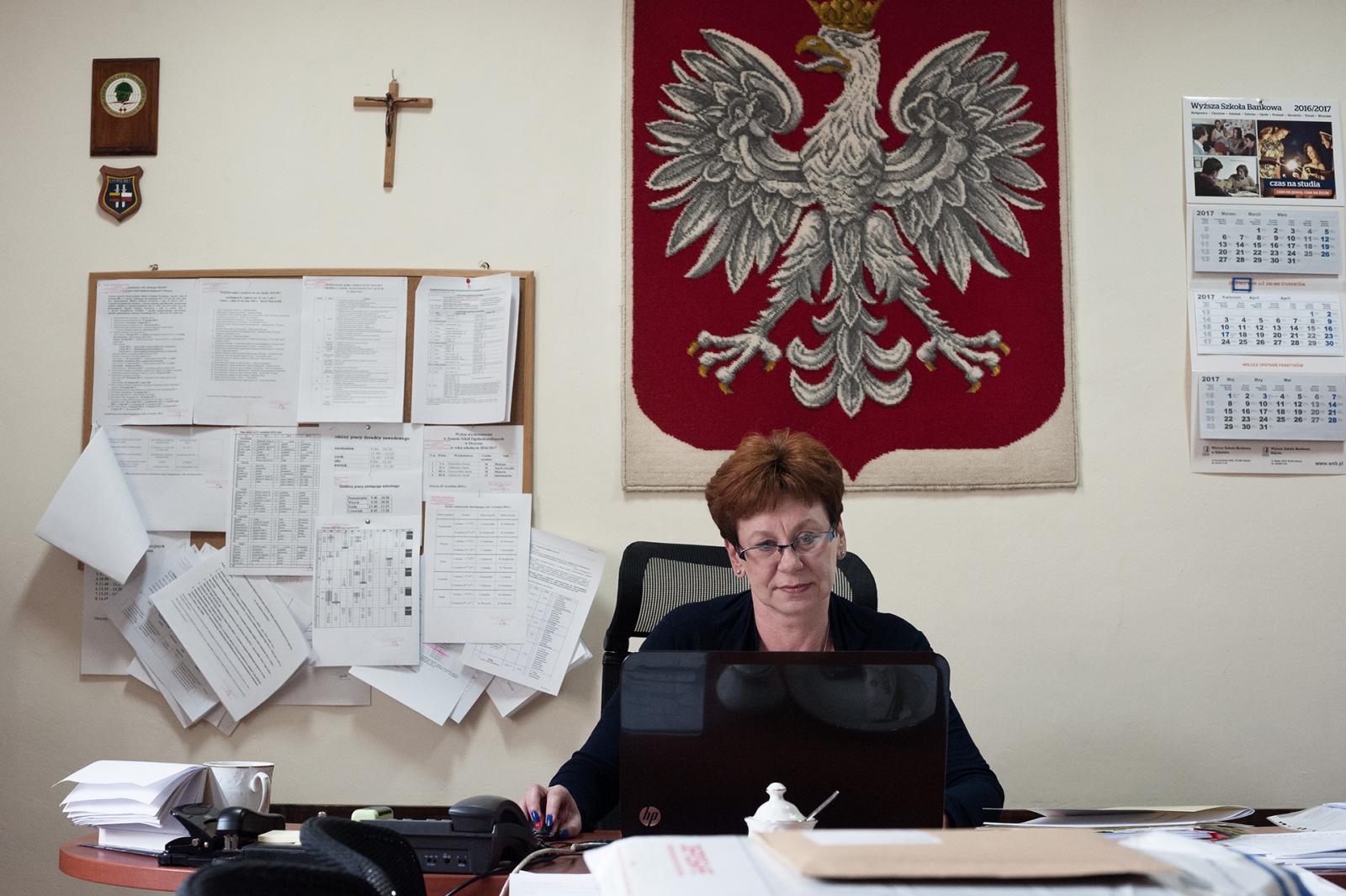 17 of 17 © 2021 Hanna Jarzabek
Wioletta MaÅ‚gorzata OrganiÅ›ciak, director of the Public High School in Orzysz, one of the 560 schools that propose Military Profile Classes. Orzysz, 2017
The organization of the military classes is left to each school, which independently decides the detailed content of the course. The program is carried out in collaboration with the Polish Army, with other State security forces, or with private paramilitary organizations. Paramilitaries working in schools have no obligation to demonstrate their pedagogical skills. The criterion is rather military praxis and availability, since they often perform their task voluntarily.
Public Story
Patriotic Games
Copyright hanna jarzabek 2021
Date of Work 04/15/17 - 04/30/17
Updated 10/13/20
Location Poland
Archived as Documentary, Education, Military, Photography, Photojournalism, Youth

GOD, HONOR AND MOTHERLAND
(Poland)
In recent years Polish public schools have developed “Military Profile Classes”, an educational program destined to teenagers between 16 and 19 years old. Around 560 schools across the country offer such courses, some allowing enrollment even at the age of 13. At the end of 2016, according to unofficial estimations, 60.000 students were following those programs. As for now, there is no official statistics about it.
The program, considered a “pedagogical innovation”, is developed within the frame of the subject “Education for Security”. Each school decides independently the detailed content and activities of the course. Practical activities are conducted either in collaboration with paramilitary private organizations or with the Polish Army. Their objective is to develop survival and military skills among the young, but many teachers aim also at strengthening patriotic and religious consciousness, taking “God, Honor and Motherland” for its motto.

In 2016, the Polish Ministry of Defense published “A Guide-Book for the Shooter” aimed at unifying such training at the national level. The manual, not available for the general public and sent directly to schools, fixes the basic frame of the course but also lays down some doctrine. For example, “patriotism” is defined as being related to the Catholic faith and to ultra-nationalism.

Most teenagers I spoke with enroll in this program out of preoccupation for their future. They consider the Army, the Police, or other uniformed public services as the most secure employer and hope such classes will help them get a job. Others, at least at the beginning, treat the course as an interesting adventure or feel fascinated by the military paraphernalia.  Some of them take their military experience as an adventure but do not consider enrolling in the professional Army; some want to serve the country while others think the Army is the most secure employer. What do they think and how do they perceive the world when they finish the program? I asked the same question in the first and the third class (the last one) of the program: “If you could build Poland from the beginning, what would be the most important thing for you?” While most first-year students answered: “Create new jobs”, most students from the third year answered: “Rebuild the national identity.”

By Hanna Jarzabek / Madrid, Spain — We people over 60 went through the lack of freedom and the lack of education in an open and relaxed..
Feb 14, 2019