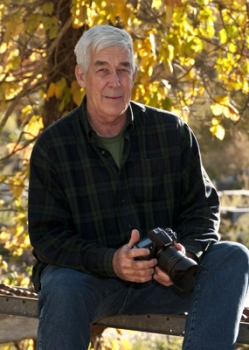 Photographer / Based in ivoryton, connecticut 06442

Artist’s Statement     Photography in Ireland was my first work, made in a place called “Ardoyne”, a housing estate on a hillside in North Belfast.  Black and white film, Kodak Tri-X... read on
Focus: Photographer, Photojournalist, Writer, Sports, Documentary
Skills: Sports, Photojournalism
ivorytonstudio.visura.co
About

Photography in Ireland was my first work, made in a place called “Ardoyne”, a housing estate on a hillside in North Belfast.  Black and white film, Kodak Tri-X and a couple of Ilford rolls, shot with a handheld Leica, mostly available light with the exception of one or two pictures.  It was a difficult place to take photographs, the people were on-edge and wary, suspicious of a stranger.  Street scenes, the friends I made, mostly children, 1971-1972.

In Belfast the situation was extreme, I had no control over events and that expectationhas shaped my work ever since.  For while my next photography at the Congdon saw mill here in Lyme, Connecticut is a very different subject, the situation resembles Ireland in that one way because in both places my photography was secondary to other concerns.   In Belfast it was politics and security that held first place, at the Congdon saw mill it’s the work of making lumber.

I’ve think of myself as a documentary, artistic photographer looking to make expressive, poetic pictures from life.  The photograph’s subject is the most important consideration for me.

I’ve want my pictures to have meaning.  Photographs began to appear for me, sometimes as if in a dream, and I had discovered photography’s art.

I started taking pictures at the Congdon mill in 1973 and have continued taking pictures there ever since.  The work includes:  portraits of the woodsman, Amos Congon, who has since passed away; designs in the scatter of wood, the patterns of wood grain, landscapes with their “Army truck” in the center,  pictures of the clutter that lies all around the place, photographs from this last group have a symbolic, magical quality that I enjoy.  The saw mill is a wonderful place to take pictures, filled with patterns of circles and squares, the lines of the lumber produced.  I’ve become aware of the saw mill as a metaphor for “an industrial place turned green”.

For the last 5 years I’ve taken pictures of the games and fans at a summer basketballtournament in Middletown, CT called the “Middletown Summer Hoopfest”.   My work has been to record some of the drama, effort, spirit, the grace played out in the games at Hoopfest.  In 2010 this project was supported by a grant from the Middletown Commission on the Arts.  I enjoy being the photographer for the Hoopfest tournament and plan to continue with it again this summer.  Cer-  tainly these pictures have an historic value and hopefully some of them attain a poetic worth.

For the last several years I’ve also taken pictures of Marty Brennan a renowned musicianand singer formally from New York who now lives and plays here in Connecticut.  Two of these pictures are included in the New Haven Art Space flatfile collection.  Marty is a tremendous performer with a wonderfully expressive, theatrical face and at times photographing him becomes very moving when  the picture and song join together.   Tony Donovan 2013