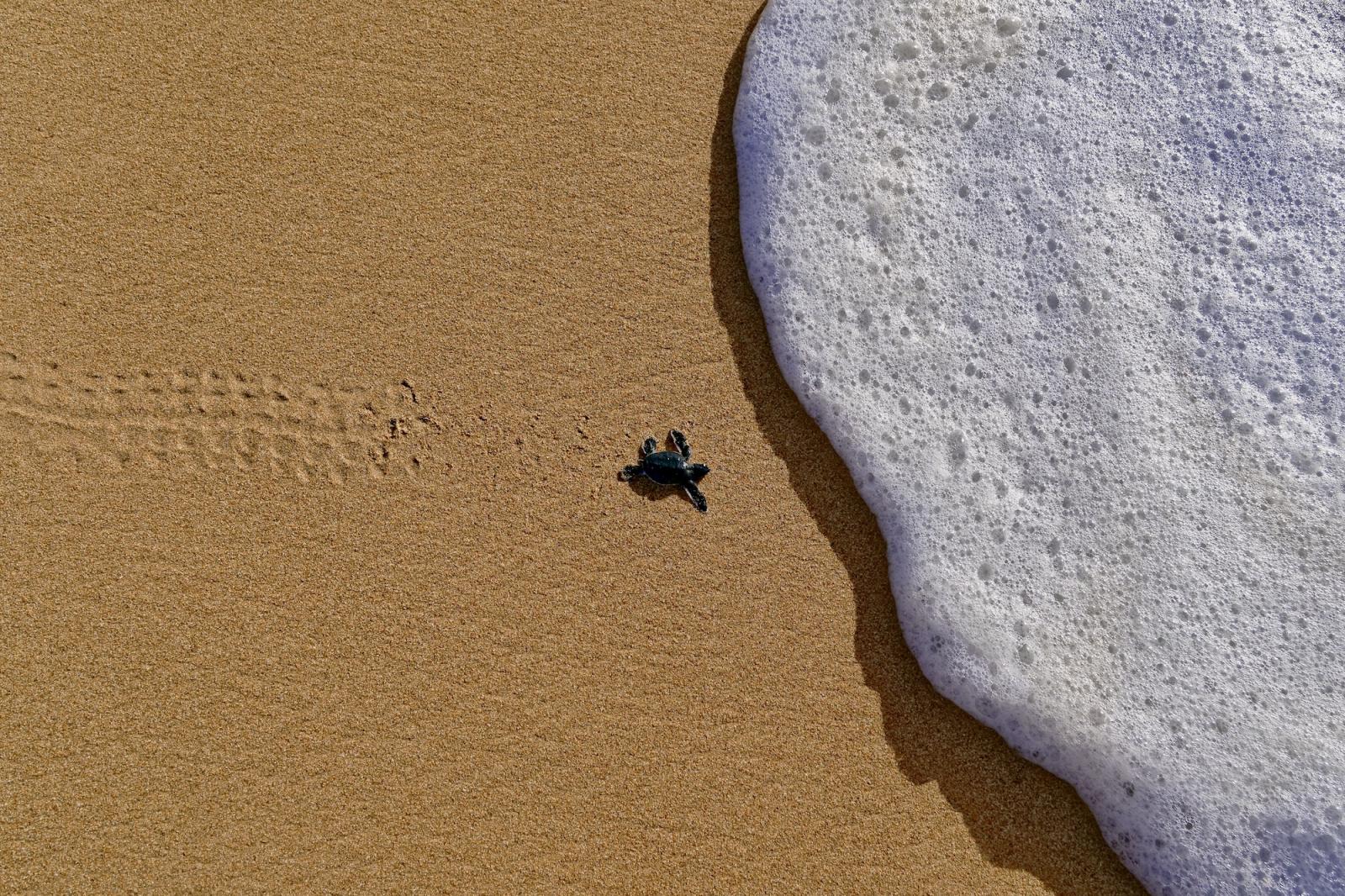 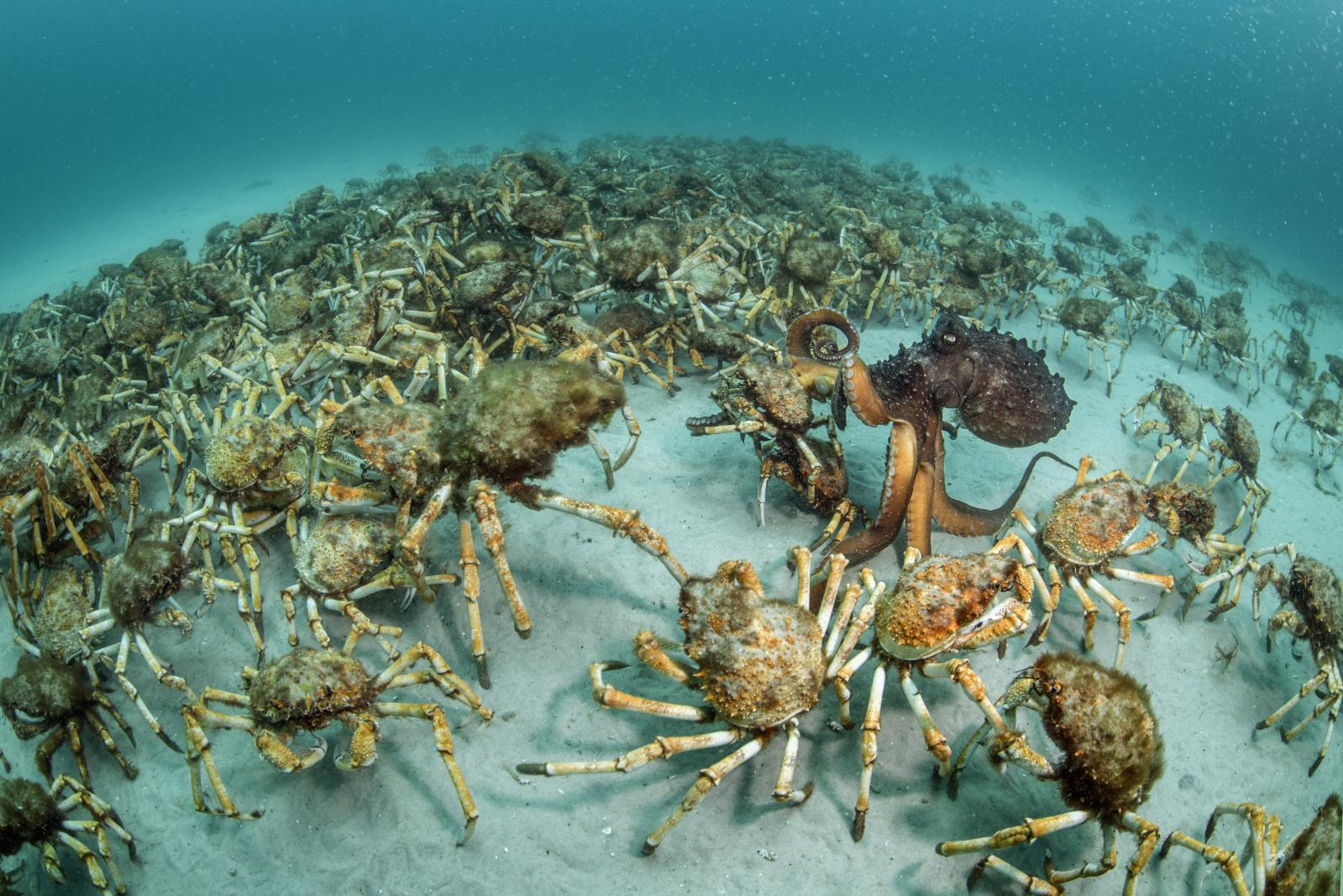 2 of 9 © 2022 International League Of Conservation Photographers
An aggregations of spider crabs being hunted by a Maori octopus, photographed off Maria Island, Tasmania, Australia. 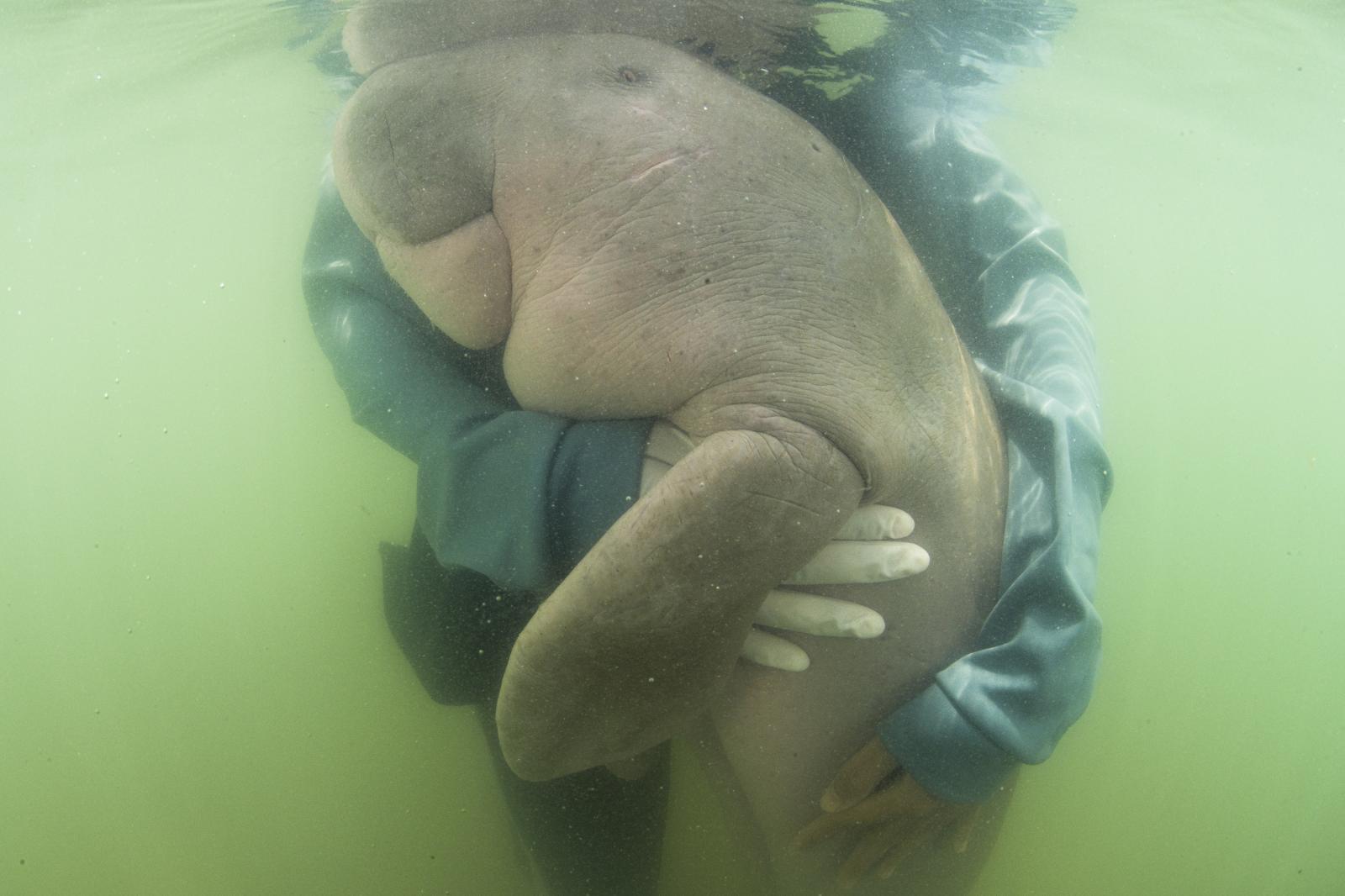 3 of 9 © 2022 International League Of Conservation Photographers
Marium, the orphaned baby Dugong (Dugong dugon) that was rescued from stranding embraces a veterinarian from the Department of Marine and Coastal Resources, while being rehabilitated in the natural environment under cares from marine mammal experts, before dying from plastic ingestion four months later. The photo was taken at Dugong Bay, a small bay with healthy seagrass bed at Koh Libong Island, Trang Province, Thailand, May 24, 2019. While being rehabilitated, Marium showed promising signs of recovery, forming close bond with its caretakers and later gained widespread affection from the general publics, and her subsequent death helped driving major public movement and policies against single-use plastic products in Thailand and also strengthening of dugong conservation and management strategy in Thai waters. 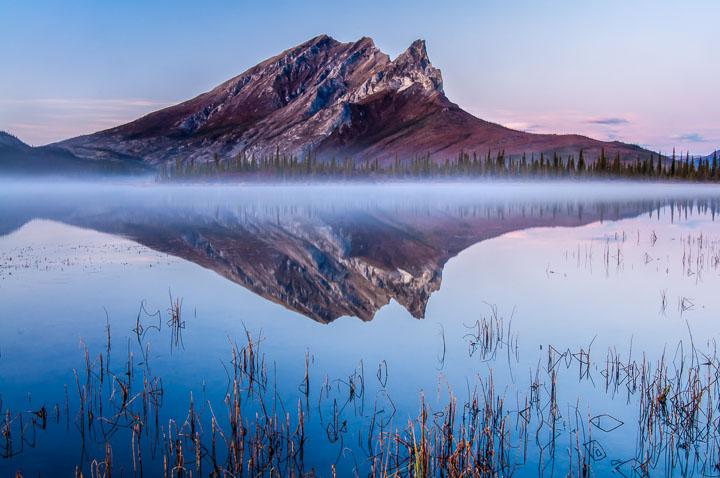 4 of 9 © 2022 International League Of Conservation Photographers
Mt. Sukakpak and lake in morning light, Brooks Range. The word Sukakpak is an Inupiaq word that means "marten deadfall." When viewed from this angle, from the north looking south, it looks like a deadfall trap. 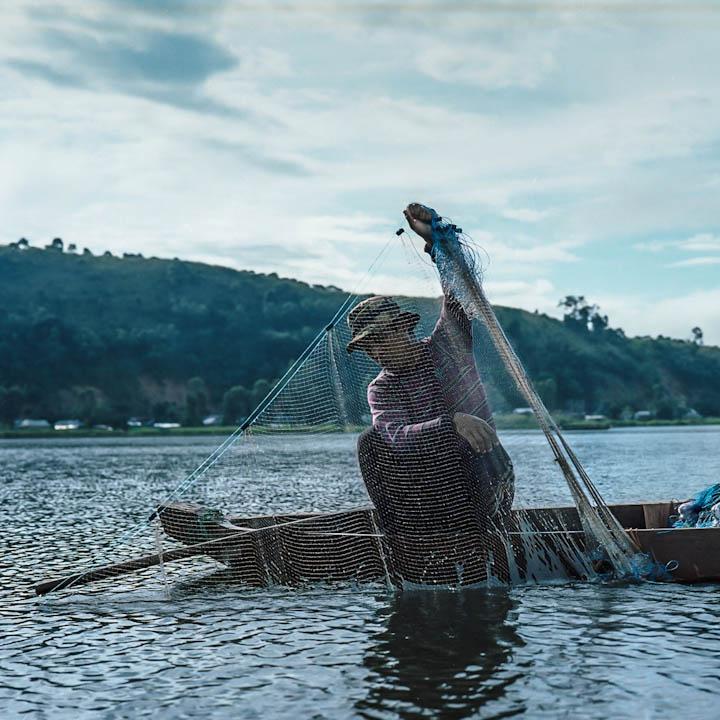 5 of 9 © 2022 International League Of Conservation Photographers
Rocky Khwairakpam, 36. Ithing, Manipur Rocky Khwairakpam has been fishing in Loktak Lake since he has been a teenager and he finds it increasingly challenging to survive off of fishing. Over the years after the 105 MW Ithai Dam was commissioned he has seen the fish population in the lake dwindle and native species such as Pengba, Sarang, Nara, and Khabag disappear. 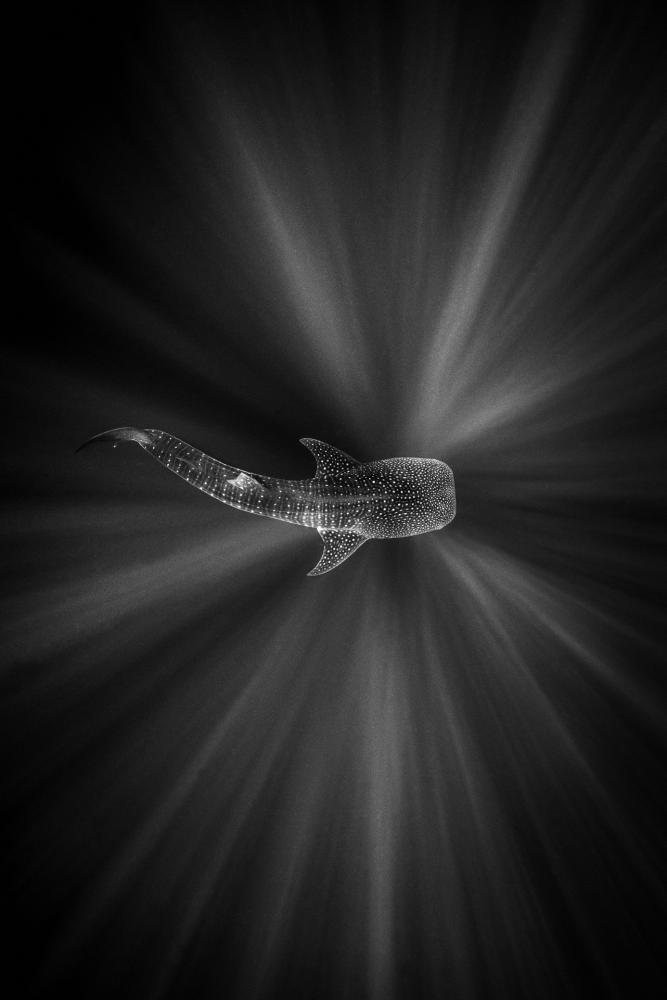 6 of 9 © 2022 International League Of Conservation Photographers
A whale shark swims underneath me in Cenderawasih Bay, Papua, Indonesia.ï¿½ The light diffracted around my body to bring itï¿½s rays onto the back of the shark.ï¿½ï¿½ 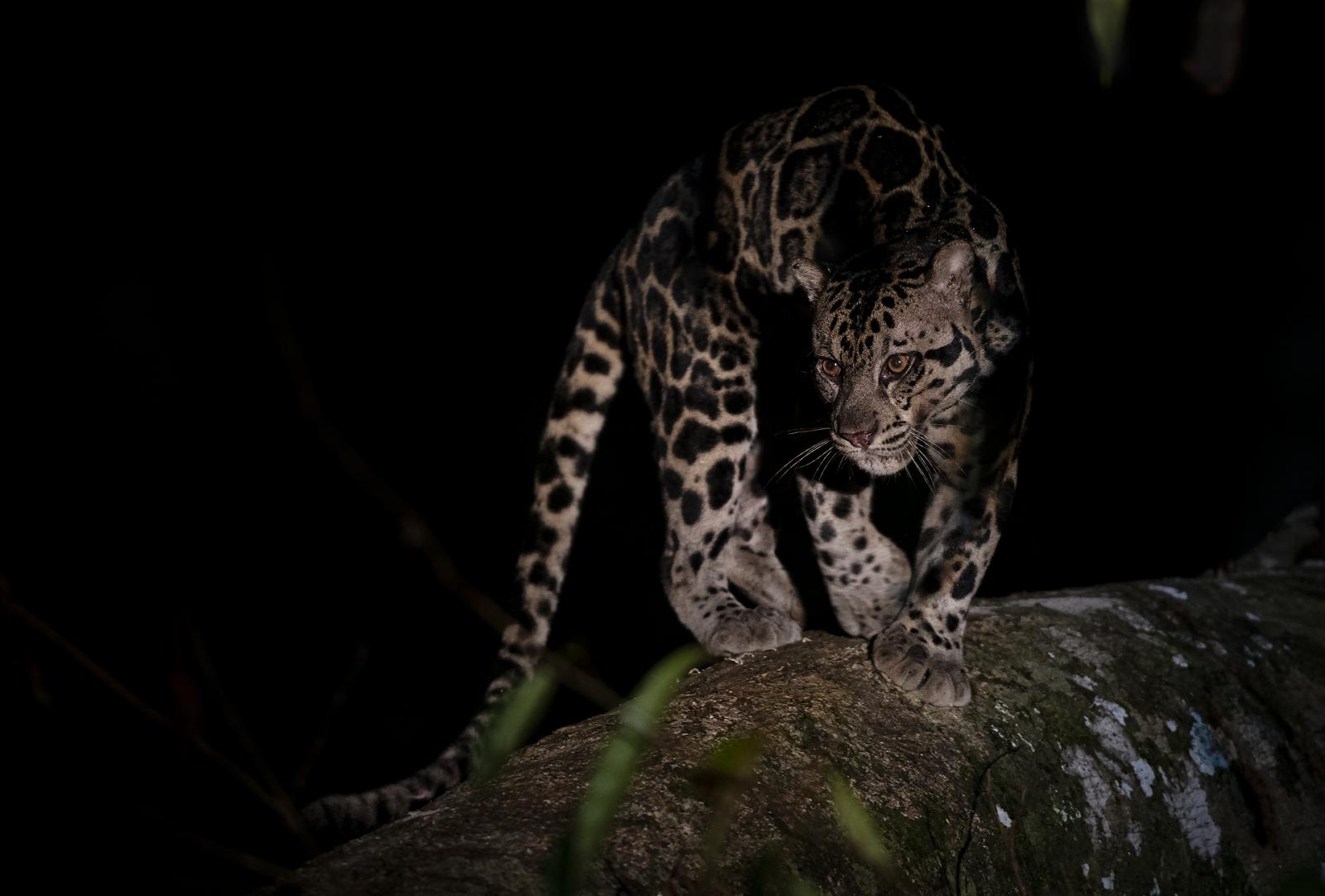 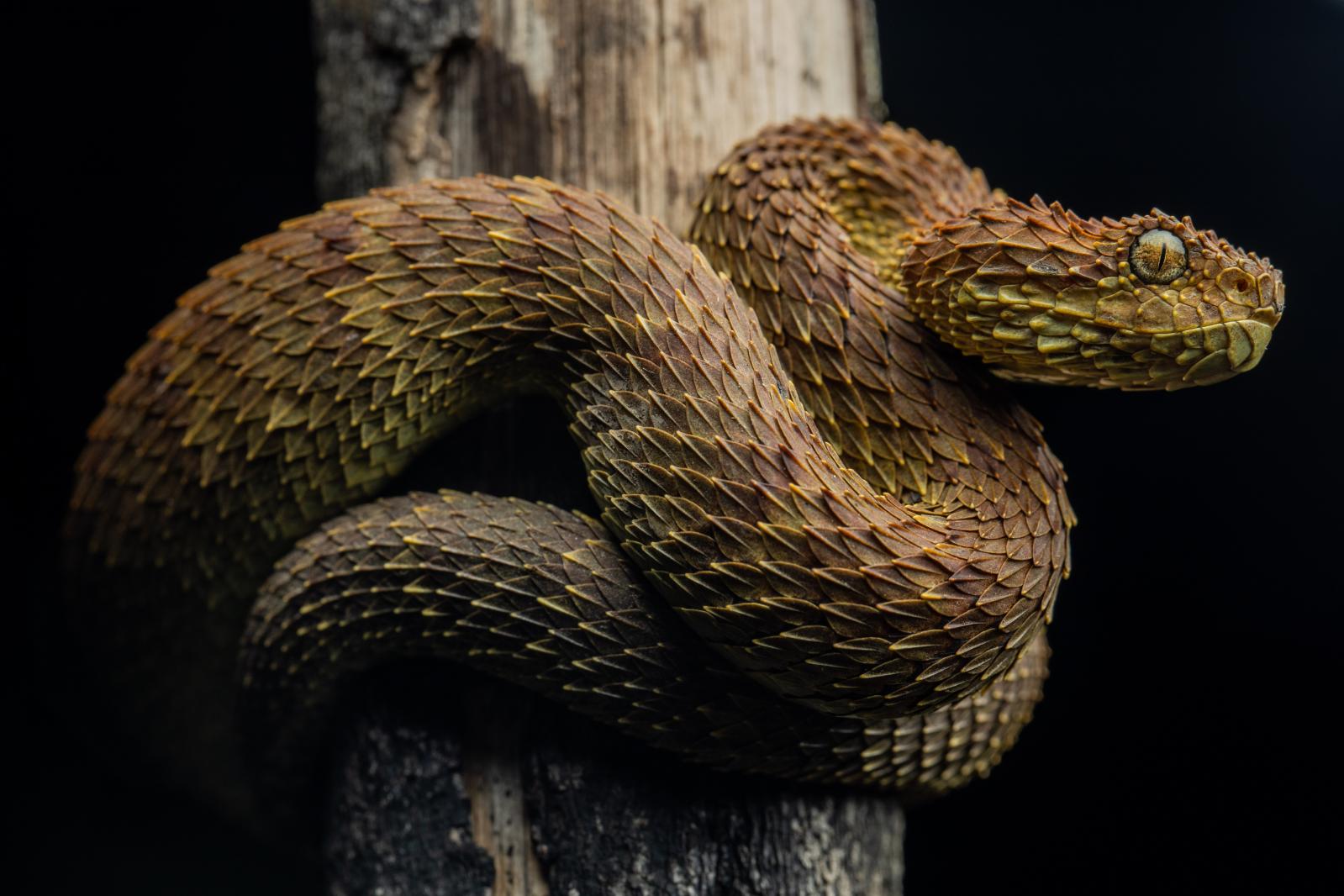 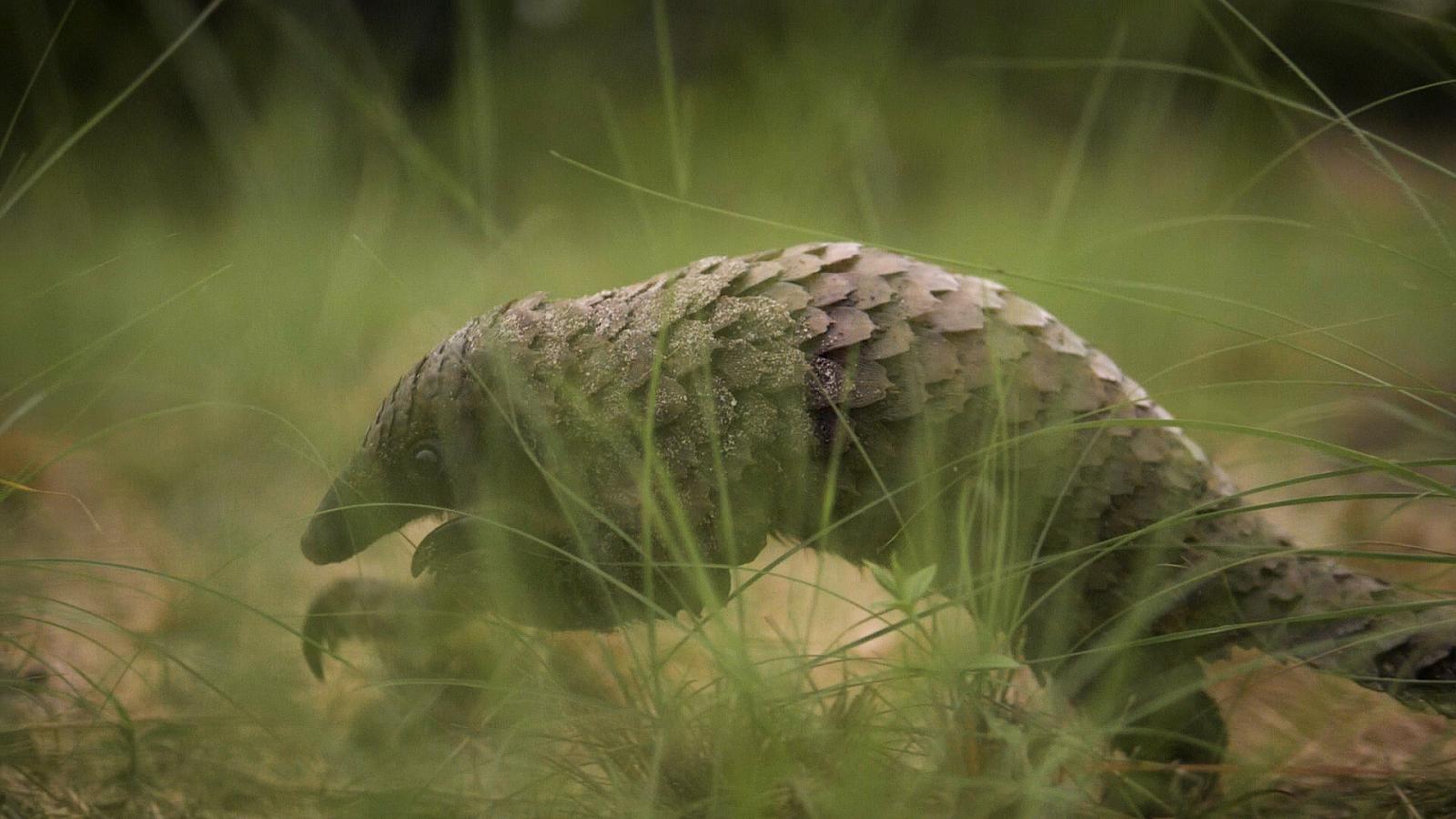 We are thrilled to announce the new Associate Fellows of iLCP!

Neeta Satam is a photojournalist, geologist, educator, and National Geographic Explorer based in Saint Louis and Mumbai.

Shivang Mehta is a photographer based in India. He specializes in photographing rare species and has worked on species like the Clouded leopard, Snow leopard, Fishing cat and Red panda, to name a few.

Carl Johnson is a photographer based in Anchorage, Alaska, who uses his images to promote conservation.

Katie Schuler is a conservation filmmaker, National Geographic Storyteller & Head of Production at Coral & Oak Studios. An advocate for the planet’s most at-risk species, Katie leverages over a decade of filmmaking experience on six continents to tell engaging stories that speak to our shared sense of empathy and compassion.

Thomas Nicolon is a French photojournalist and a National Geographic  explorer. He covers wildlife conservation and the growing conflict between humans and wildlife.

Kristi Odom is an internationally acclaimed photographer, a Nikon Ambassador, and a motivational speaker.  A photographer and filmmaker, her work focuses on connecting people emotionally to animals and celebrating those who have a connection to the natural world.

Justin Gilligan is a natural history photographer based in Australia. Through his work, Justin strives to create images that draw the viewer’s attention to the beauty of the natural world and our diverse connections to it.

Earth Month 2022: Invest in Our Planet

Announcing the 2021 application dates and a NEW scholarship opportunity