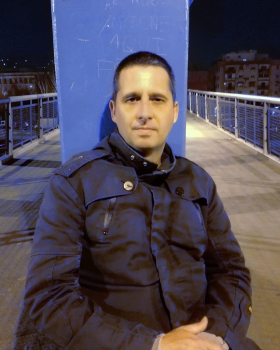 Photographer / Based in Madrid

My photographic series show the relationship, sometimes contradictory, between the natural and the artificial, between animate and inanimate. I research on places or situations where something seems not to be in the right place (physical or temporal place). Although the series can be formally very different from each other, always a common theme underlying all of them, related to the human trace.

My major photo works are:

-"VOR: Before the Satellite" (In Progress)": VHF omnidirectional range  (VORs) are huge radio antennas, also called radio beacons, used in aviation, through which information is transmitted and received to fix the location of passing aircrafts and the routes established by their pilots. VORs are located in isolated and remote locations far away from big populations to avoid interferences in their radio broadcasts, so they are rarely seen and known, except by people related to the world of aeronautics, thus they generate strange and disturbing images, and provide an interesting contradiction between artefact and nature. VOR is the current standard air navigational system in the world, although he future of VORs is uncertain due to the development of satellite navigation systems, which work more accurately, especially in Europe, with the European satellite system “GALILEO” whose full implementation planned for 2020, is underway.

-"The Line on the Map" (2015): In this series, are shown several areas of the border between Mexico and U.S.A. crossed by the border fence. This wall crossing the territory generates disturbing and contradictory images: in some places it forms the backyard of many homes; in the natural landscapes suggests a strange mixture of modern Chinese wall, panoptic and Land Art piece. Paradoxically, showing the wall without people, emphasizes its coercive character and the huge imbalance between the power of the states and their relationship with individuals.

“After Schengen”(2011-14): shows some of the old border crossing points that still exist out of order, in all the states of European Union. This series won the 2.013 Project Development Grant (CENTER, Santa Fe, New Mexico, USA). Juror: Denise Wolff (Aperture).

-"Natural Selection" (2008): images of modern zoos that mimic the habitat of animals.

-"The Lost Steps" (2000): images of uninhabited villages in different areas of Spain.

All the series have been published and displayed in several exhibitions, both solo and collective.

Between 2012 and 2016 I co-organized an anual workshop about creative photography in King Juan Carlos University (Madrid, Spain): http://tallerfotografiaurjc.wordpress.com