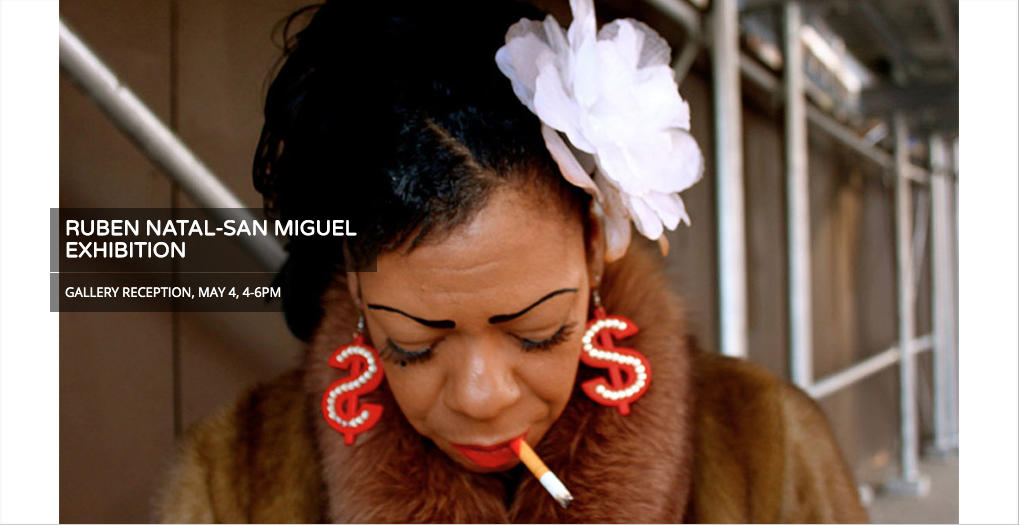 Gallery Reception: Saturday, May 4, 4-6pm
CPW is pleased to announce a solo exhibition featuring Ruben Natal-San Miguel and his stunning street portraits. Much more than a documentary photographer, Ruben captures his subjects through participatory portraits that deftly avoid stereo-types. The Harlem-based artist brings to life a community while connecting deeply with his subjects in chance encounters that frequently last only a few moments. As executive director and curator of this exhibition, Hannah Frieser, writes: “Ruben is one of those rare people, who can create an immediate connection with perfect strangers. He invites them into this dialogue with his camera, and they open up to him with an uncanny trust and confidence. A few minutes later they continue on their way as if nothing had happened.”

The solo exhibition Making the Invisible Visible: Ruben Natal-San Miguel is shown in conjunction with two other exhibitions, Just Beyond the River. A FolkTale by Daesha Devón Harris and Woodstock AIR: Housed. Special thanks to the Andy Warhol Foundation for the Visual Arts, the Joy of Giving Something Foundation, and the New York State Council on the Arts for their support of CPW's exhibitions. CPW galleries are free & open to the public, Thursday - Sunday, 12 noon - 5pm and by appointment. Please note that special hours apply during the holidays. Educational tours are available upon request. CPW is located at 59 Tinker Street, Woodstock, New York 12498.
ABOUT THE ARTIST

International art fair representation includes: Outsider Art Fair, SCOPE, PULSE, Art Chicago, Zona Maco, Mexico, Lima Photo, Peru and Photo LA. and Filter Photo Festival in Chicago Ill.  His photography has been published in a long list of publications, highlights: New York Magazine, The New York Times, The Huffington Post, Time OUT, Aperture, Daily News, OUT, American Photo, ARTFORUM, VICE, Musee, ARTnet and The New Yorker. In 2016, Ruben’s Marcy’s Playground was selected for both the Billboard Collective and website for Apple. His photographs are in the permanent collections of El Museo Del Barrio in NYC, The Center for Photography at Woodstock, NY, The Contemporary Collection of the Mint Museum Charlotte, North Carolina, The Bronx  Museum for the Arts, School of Visual Arts, NYC and The Museum of The City of NY.

Elliott Landy: The Spirit of a Generation

By Hannah Frieser — Photography Now is the Center for Photography at Woodstock's annual call to discover the most compelling..
Feb 11, 2019