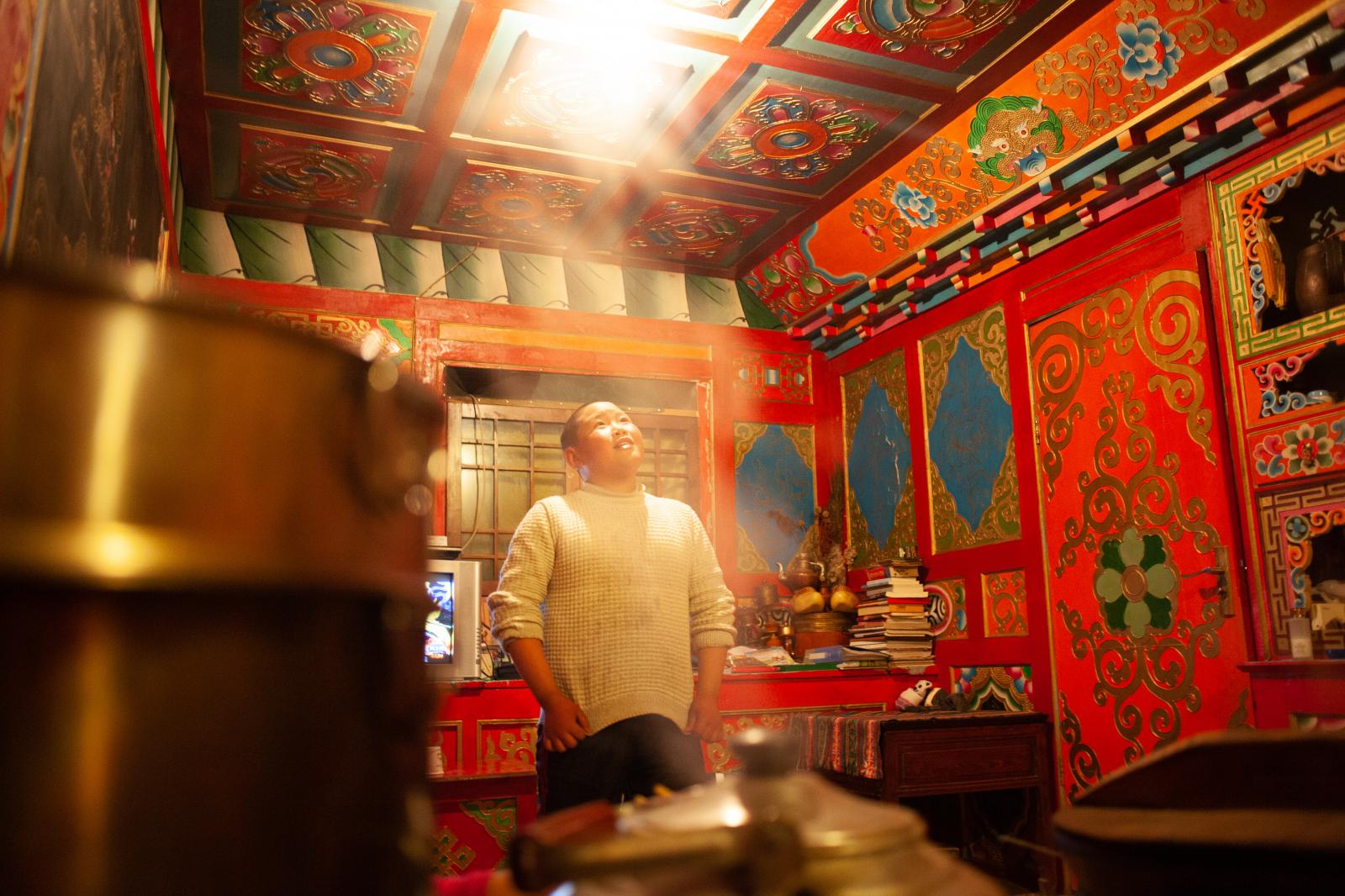 1 of 12 © 2020 April Fonti
WE are high up on the eastern slope of the Tibetan plateau in the southwest mountains of China and a young Tibetan boy is singing for an audience of yak herders and monks.

A dim yellow globe lights up handpainted lotus flowers on the walls and the boy sings with a beautifully controlled tremor. When he finishes, everyone starts to clap. But the boy’s aunt starts chiding him. ‘‘You need to learn some valley songs,’’ she says, before clumping across the wooden floors in her black skirts to teach him a yak-herding song.

When she sits down again, her cheeks are flushed from the dancing and the wine. The boy was singing Tibetan pop songs in the Chinese language and he learned them from watching television. She says the singer is popular with all the young Tibetan girls. He’s rumoured to be so strong that he needs to eat a kilogram of yak meat every day.

We start laughing at this and she proposes another toast, this time to the singer. It’s Tibetan New Year, and I guess this is going to be yet another night of getting drunk on homemade barley wine. 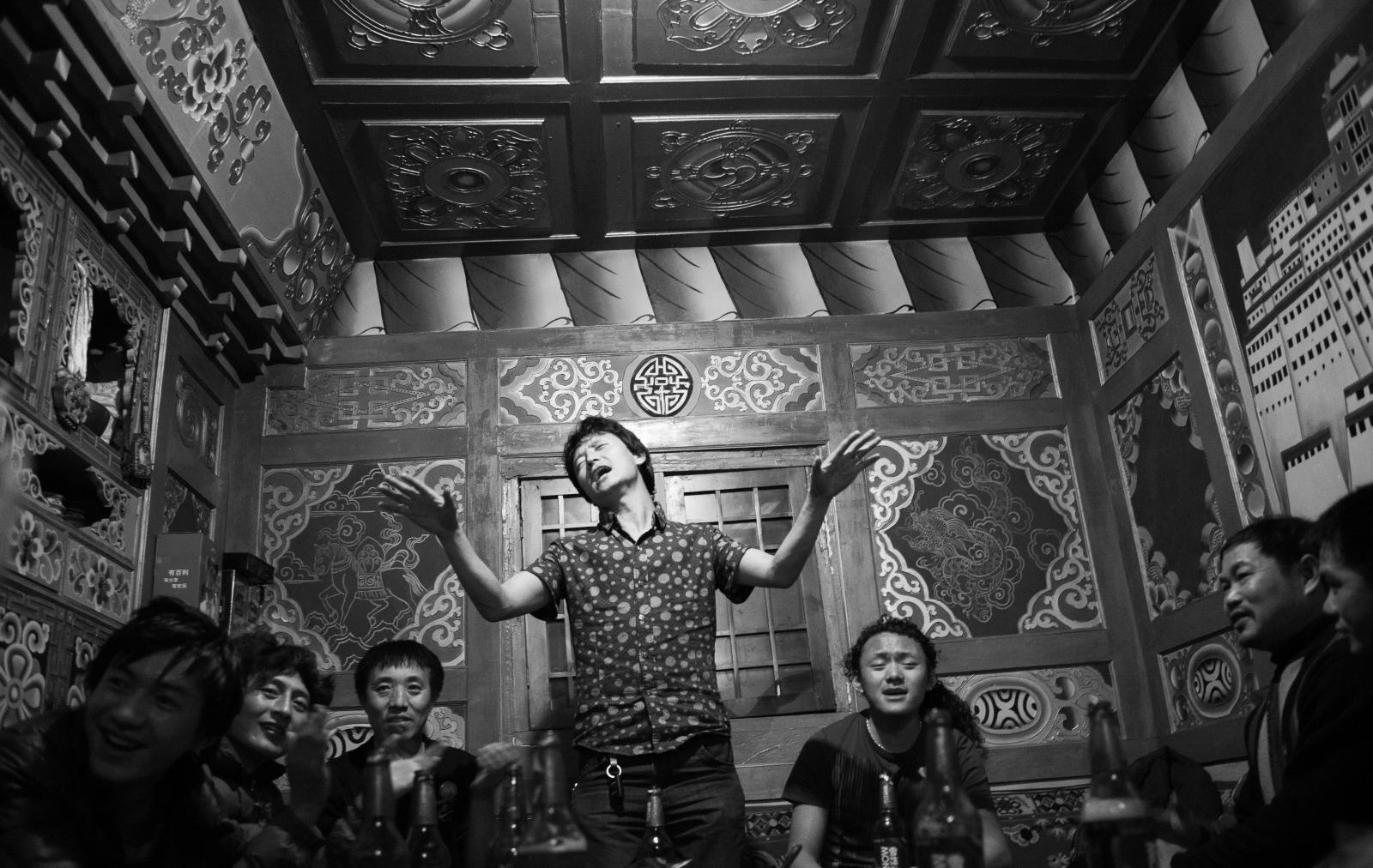 3 of 12 © 2020 April Fonti
The aunt, Zhuo Ma, often wears Western clothes and has a fairly unconventional life for a village woman. So it’s only later I realise how serious she was when she spoke to the boy that night.

I’m staying at her home in Jiuzhaigou, an area famed for its snowy mountains and emerald green lakes. After spending weeks in huge, anonymous Chinese cities, I’ve chosen this Tibetan homestay over the large hotels down the road. There’s something heartwarming about being in a home covered in rich crimson paintings and sleeping in a bedroom that resembles a slightly rundown anthropological display.

The amenities are basic, but not completely rough; the shower is piping hot and there is an electric blanket, privacy and better food than I’ve eaten for months. 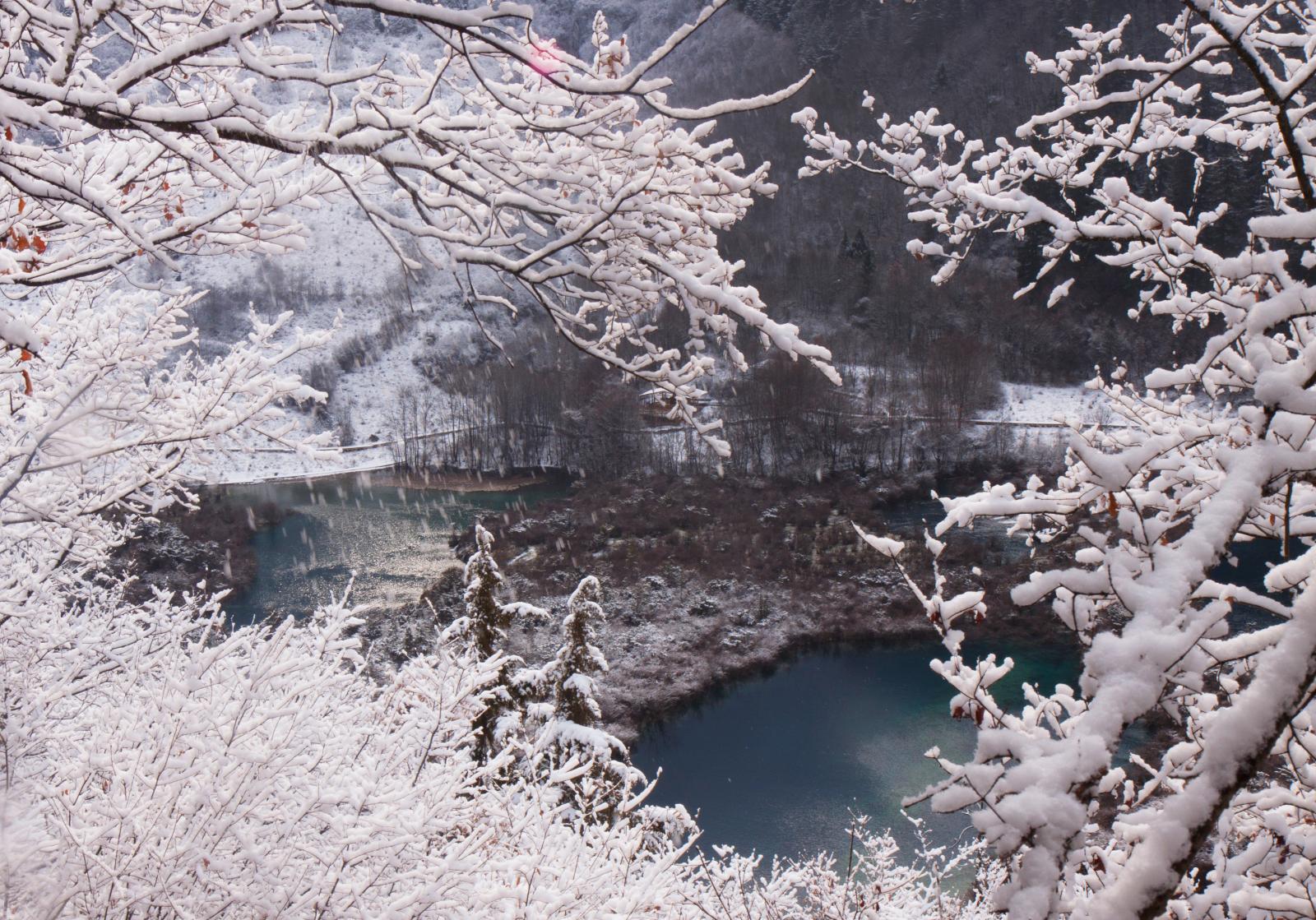 5 of 12 © 2020 April Fonti
Plus there’s interesting company and comforts hotels can never provide. One of them is Ama, the boys’ grandmother and Zhuo Ma’s mother. She’s a big, solid woman often found perched on a tiny child-sized wooden chair by the living-room stove. From here she tends the fire, reaching into the flames with her tough bare hands, stirring butter tea, rolling pastry for yak dumplings and periodically launching herself up to serve hot tea, ladling it out with a big copper spoon as she moves slowly around the room in her long Tibetan dress.

Her belt is studded with lumps of topaz and she wears a red fur lined hat. She also has a jagged scar on one cheek from the time a yak tried to headbutt her.

Underneath her thick floral stockings, her stocky legs are pitted with scars from the time she went on pilgrimage.

Although she barely speaks English, we manage to have long, thoroughly enjoyable conversations with just a few words of each other’s languages and frequent miming. 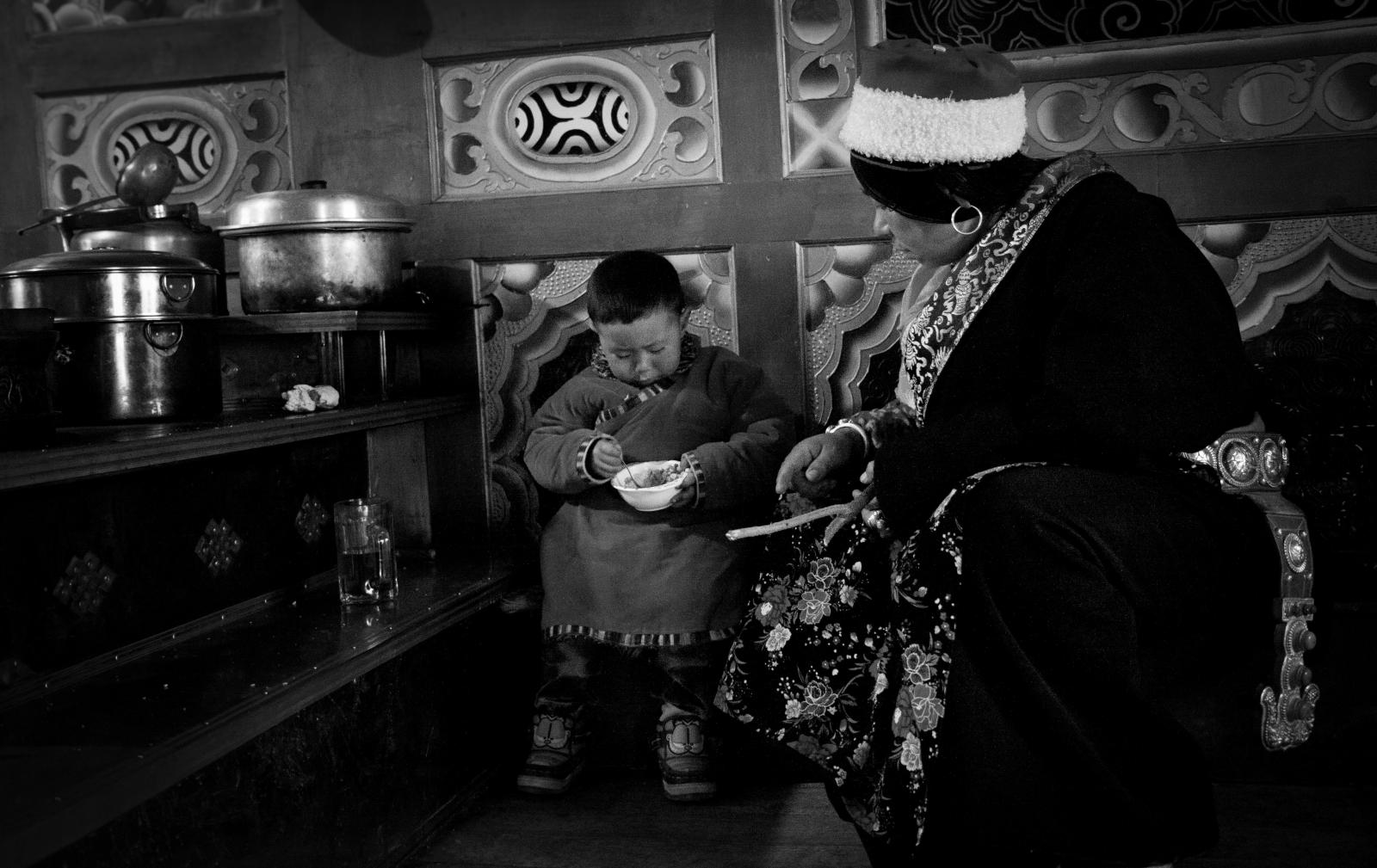 7 of 12 © 2020 April Fonti
Ama's daughter Zhuo Ma is a rebel. She spent her childhood working as a yak herder in this remote area, then refused to have an arranged marriage before moving to Beijing at the age of 17. Until then she’d never had the chance to go to school and couldn’t even write her own name. Yet by the age of 31 she’s taught herself Chinese, passable English and a little French. She’s also travelled to Europe twice, started this homestay and opened the only restaurant in the area that serves traditional Tibetan food.

It’s the kind of food you find yourself daydreaming about on a cold afternoon. In the morning, the low wooden table at their home is laden with hot, fresh barley bread, honey and butter tea or coffee. Throughout the day there are perpetual plates of greens fried with onions and chillies, peanuts scattered with sugar, sunflower seeds, roasted tree mushrooms, and chilli sauce to spoon on to dumplings stuffed with yak meat, which tastes a little like beef.

Then, of course, there’s the barley wine Ama makes, sweetened with dollops of honey harvested from their hives.

Zhou Ma’s brother Dorjen Ju and I go out to check on the bees one afternoon during my second week in their home. 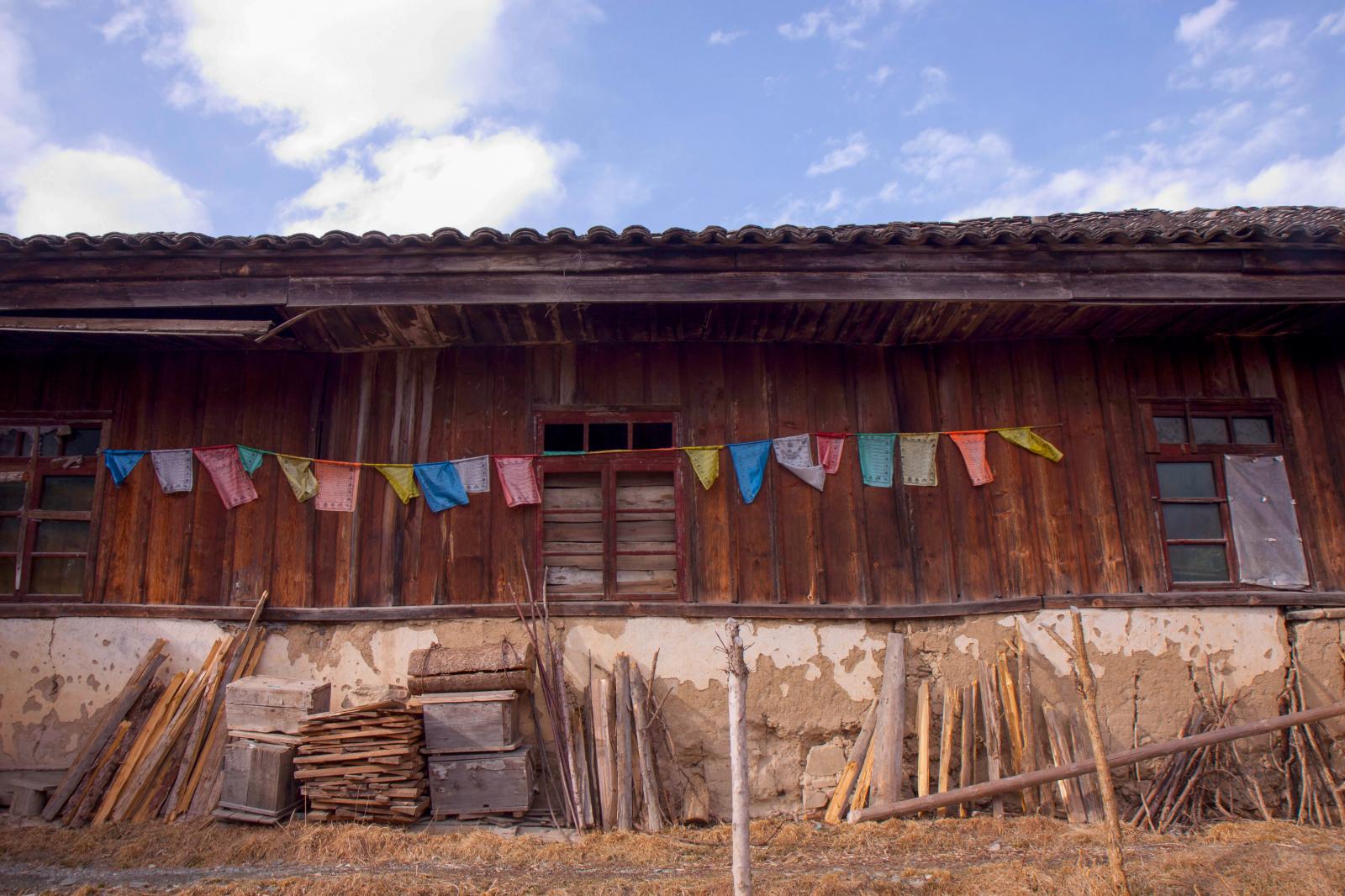 9 of 12 © 2020 April Fonti
Although hives of pregnant bees are kept in small wooden structures behind the house during winter, the younger bees are kept in another valley higher up where their yaks herd. We pile on layers of clothes and leave the warmth of the house, traces of ice crunching underfoot and hot tea still in our bellies.

We take a motorbike and drive until the warm house with its fluttering red and green prayer flags has disappeared from view. At the property he gently lifts each hive. They’re made of huge logs hollowed out and tied together with wire. He’s testing their weight to check if the bees are still alive. They’re fine, so we don’t stay long and don’t bother to light a fire. On the way back I walk the last bit on foot, climb up a little and see the whole valley for the first time.

The valley is gently curved with about 300 stone houses scattered at various heights and the dark shadow of the mountain rising behind. The sweet scent of burning wood fills the atmosphere and trails of smoke coming from the chimneys create a sort of web in the air. It’s so quiet I can just hear the creak of the little wooden wheelhouse. 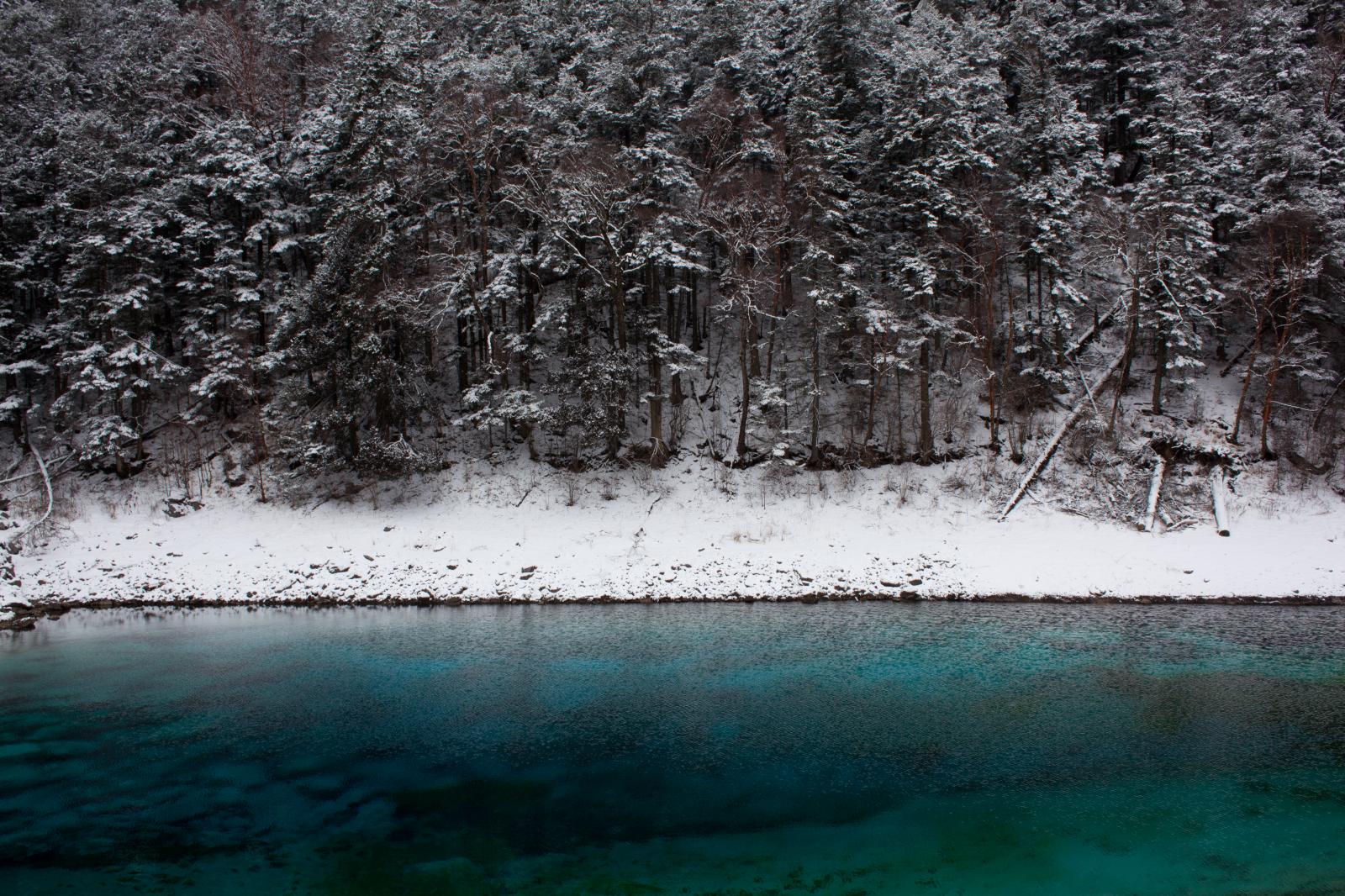 11 of 12 © 2020 April Fonti
Just 15 years ago the people who live in this valley travelled by horseback and ventured intotown only to buy tea. But now there are cars parked in the shadows of some homes and even Ama can speak Chinese and has a mobile phone that she keeps tucked inside her dress. The change has been rapid for these people. I wonder what it will be like, say, 20 years from now.

Zhuo Ma says she realised the valley was beautiful only after she returned from Beijing. But she also says it needs to change. They recently entered the cash economy for the first time. Some are moving away for work and Zhuo Ma worries they are abandoning their culture. She hopes they can keep their culture alive by working together, openingmorehomestays and making original Tibetan handicrafts to sell to tourists who visit the surrounding areas. For her part, Zhuo Ma says her passion is teaching people about Tibetan culture through food.

The older boy’s singing that night is good, even to the untrained ear. But Zhuo Ma says he watches too much TV and doesn’t sing with heart like his father. She remembers hearing his father sing valley songs when she was a girl. She says it was beautiful and that only now does she understand why it made the old people’s faces stream with tears.

Public Story
Valleys Deep and Mountains High
Credits: april fonti
Date of Work: 09/01/11 - 09/30/11
Updated: 11/11/19
Archived as:  Buddhism, Civil Rights, Documentary, Freedom, Oppression, Photography
WE are high up on the eastern slope of the Tibetan plateau in the southwest mountains of China and a young Tibetan boy is singing for an audience of yak herders and monks.

A dim yellow globe lights up handpainted lotus flowers on the walls and the boy sings with a beautifully controlled tremor. When he finishes, everyone starts to clap. But the boy’s aunt starts chiding him. ‘‘You need to learn some valley songs,’’ she says, before clumping across the wooden floors in her black skirts to teach him a yak-herding song.