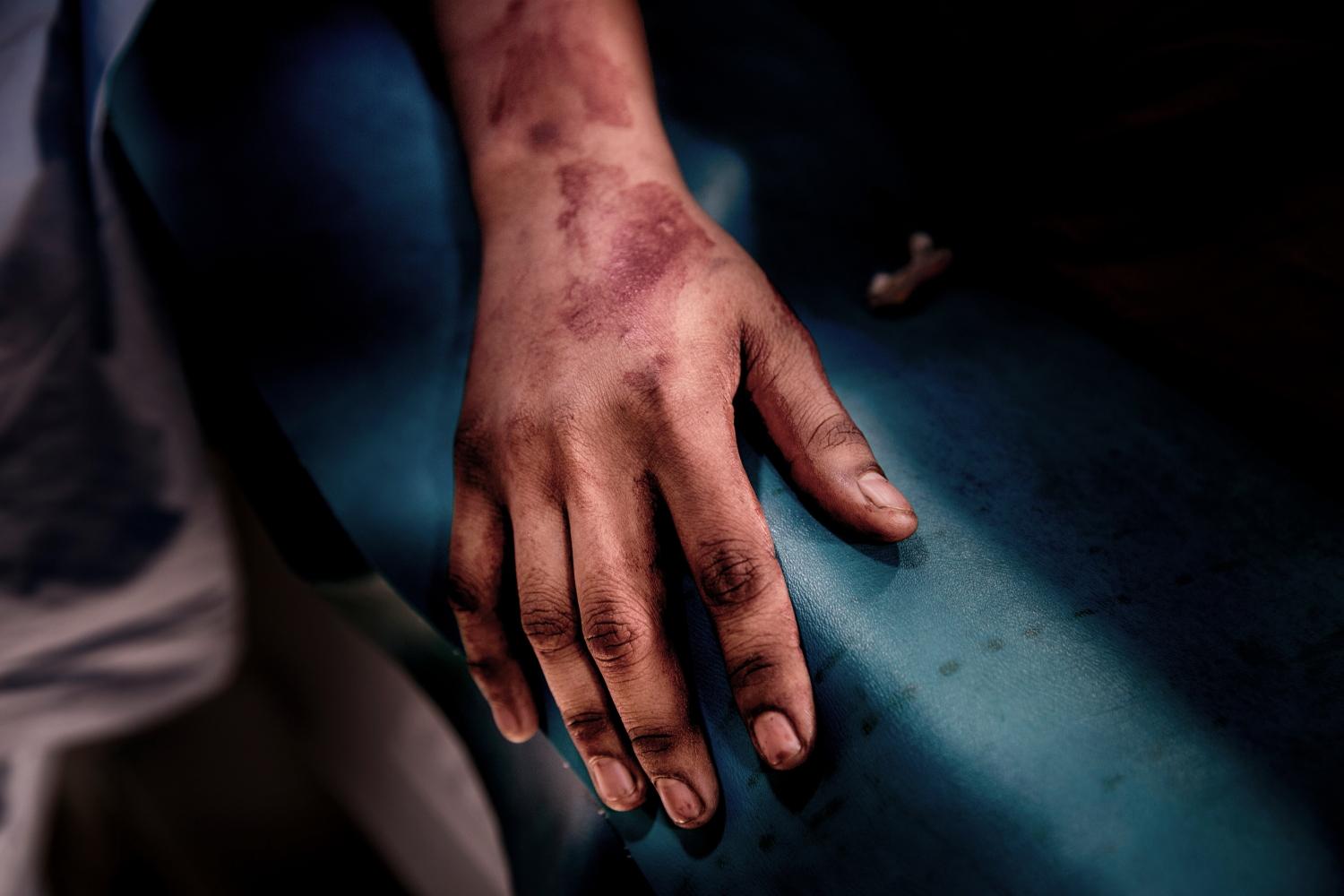 1 of 12 © 2023 Fabeha Monir
Hands of Bobita in an emergency room at Tongi industrial zone. Female textile workers routinely face gender-based violence and exploitation. Bobita did not call to her parents. She does not want their villagers speak ill about her profession. She says, ‘If they know what happened to me, they will lose their mind. I do not want to go back and depend on my old father.’ Tongi, Bangladesh 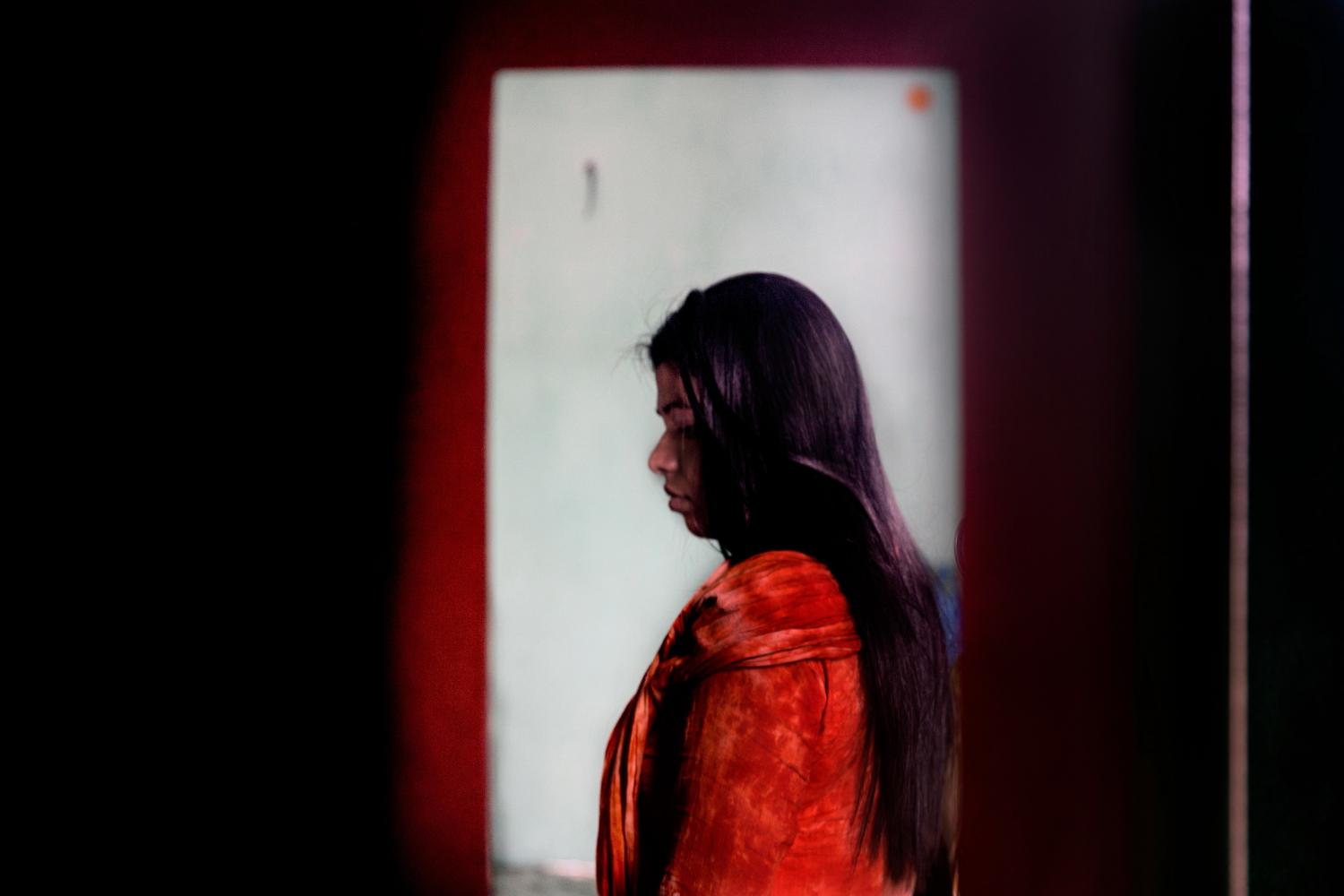 2 of 12 © 2023 Fabeha Monir
After facing sexual assault and exploitation in factories, like 21 years old, Tania, textile worker does not get justice often times due to lack of evidence. She says, ‘I left my job because I was tired explaining my assault at every door where I seek for justice. No one listen to me with empathy. Leaving is easier than fighting.’ Tongi, Bangladesh 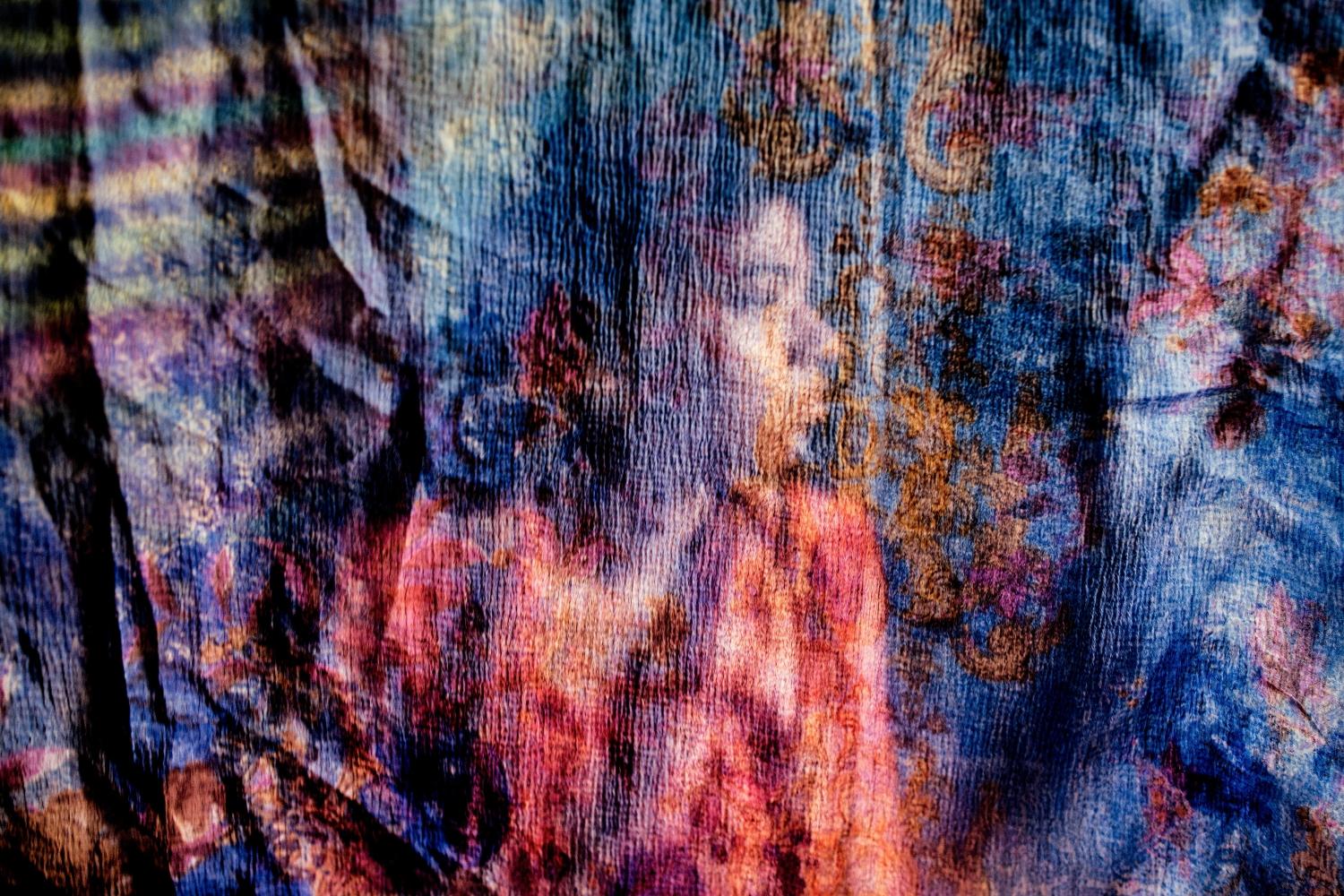 3 of 12 © 2023 Fabeha Monir
20 years old Textile worker Rabeya is sitting inside her house which she will change soon. After reporting sexual harassment case in her factory muscle men of the locality is tracing her whereabout. In this fear she is shifting her home already quite a few times. She says, ‘Every time my phone rings I shiver in fear. It was a mistake to lodge my compliant for the harassment. Now I am living in a fear to lose my life.’ Tongi, Bangladesh 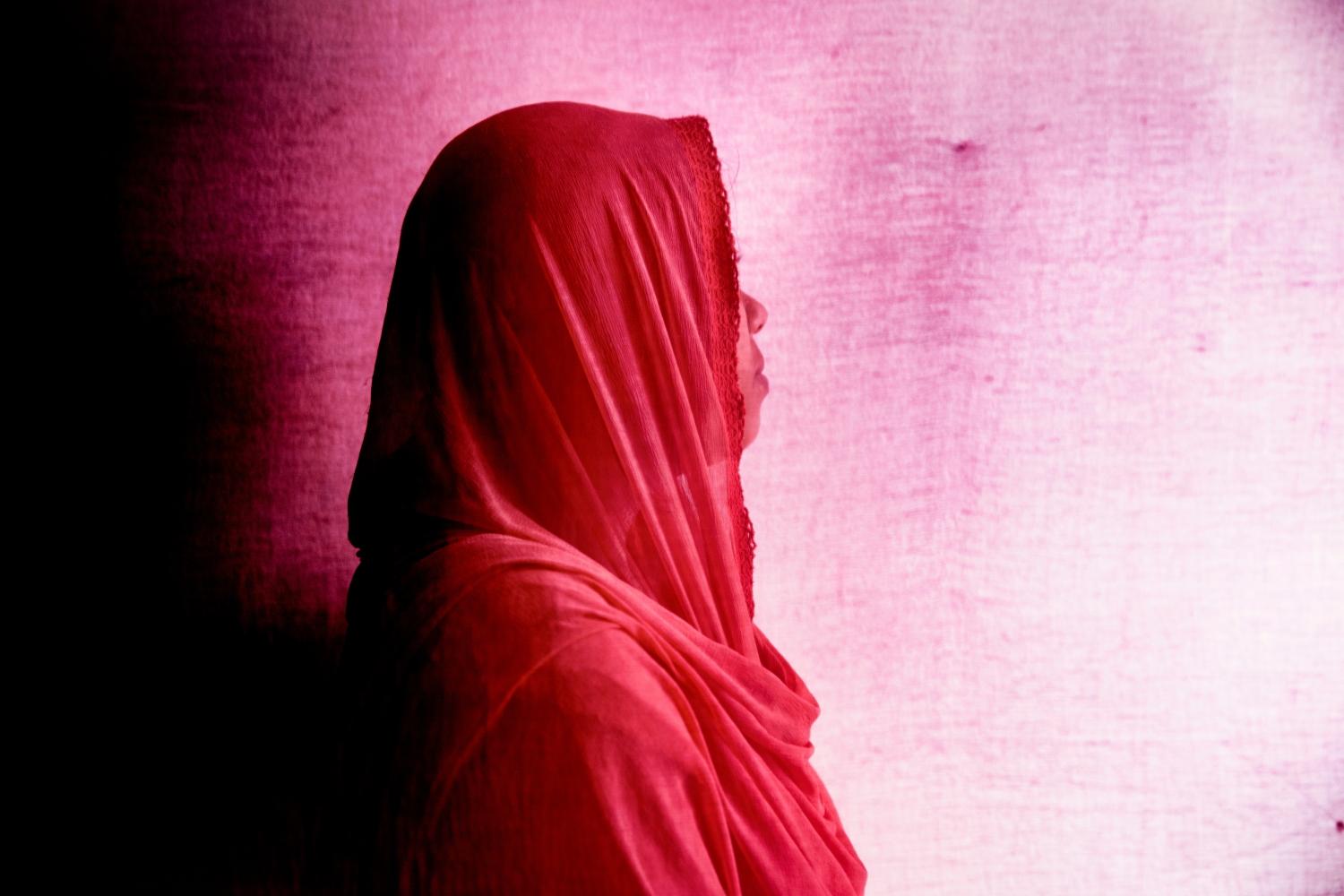 4 of 12 © 2023 Fabeha Monir
Sabina (26) is passing her days in anger and frustration after not getting any justice. She was forced to leave her job and tricked to sign paper. She says, ‘My husband also fought for me. The man harassed me should be punished. But my other colleagues are shaming me for lodging the complaint.’ Tongi, Bangladesh 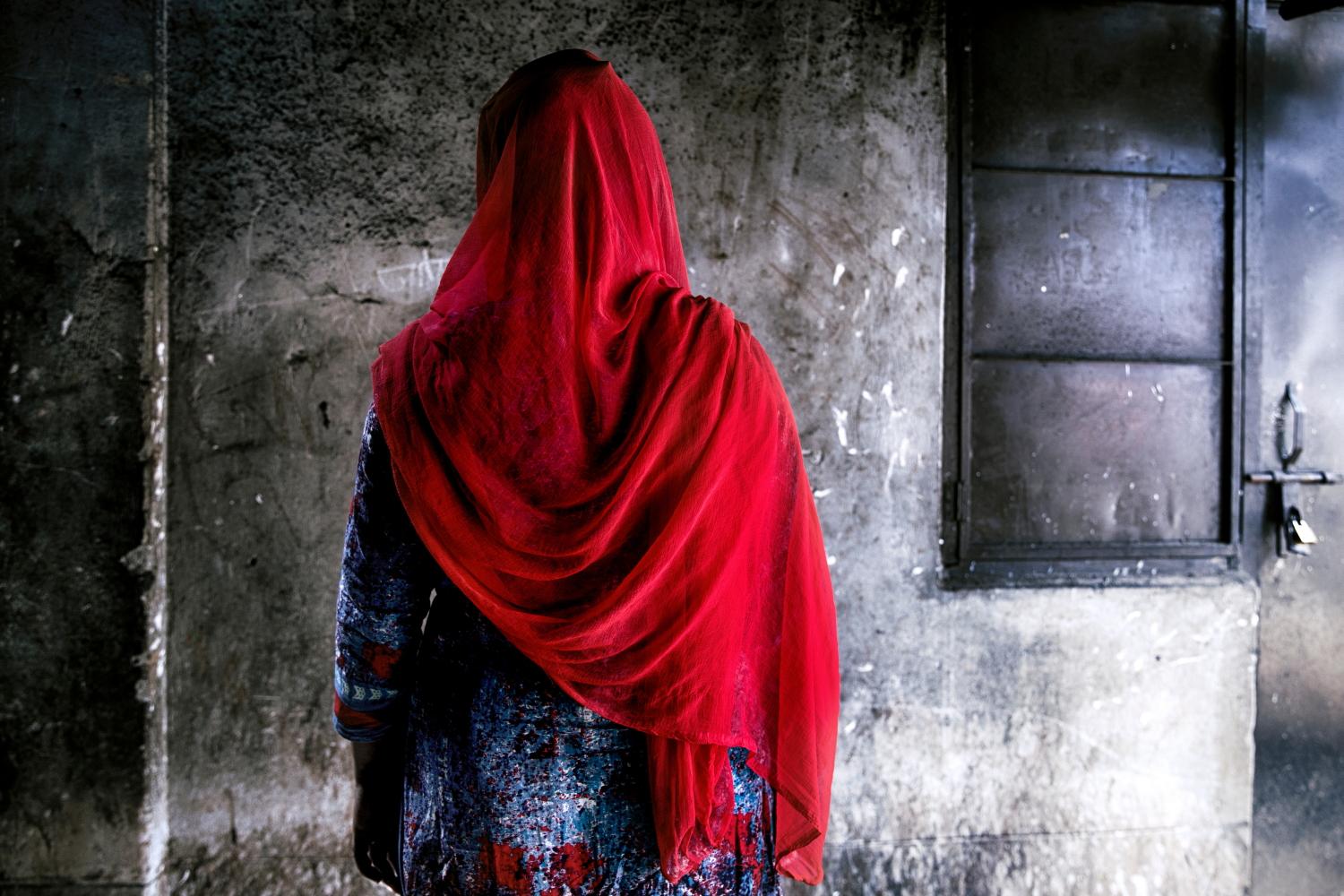 5 of 12 © 2023 Fabeha Monir
Textile worker Salma (21) changed her factory after being harassed by her male colleague. Women do not want to speak about their harassment with other female worker in fear of losing their reputation. Salma said, ‘I do not discuss much aboyt the incident in the factory. No one will listen to me. It’s better to remain silent.’ Tongi, Bangladesh 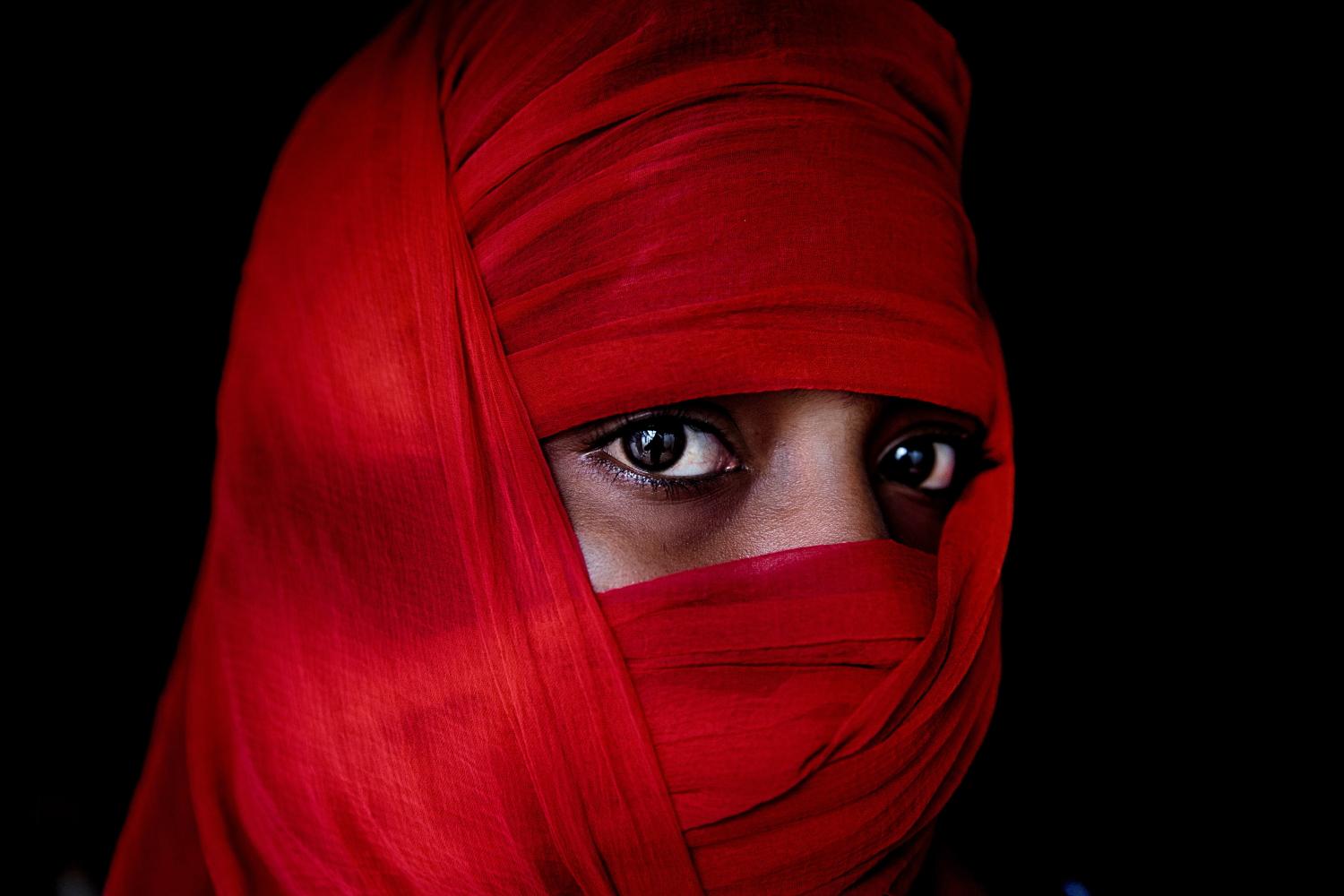 6 of 12 © 2023 Fabeha Monir
Hafsa Begum (20) had faced harassment from her line manager, who wielded power over junior machine operators. “I was extremely tired since I’d been working since eight o’clock in the morning and was walking slow. The other girls walked ahead of me and that’s when my line manager seized the opportunity. I kicked and slapped him but he still managed to drag me into a dark alley next to the factory,” Hafsa explained. Tongi, Bangladesh 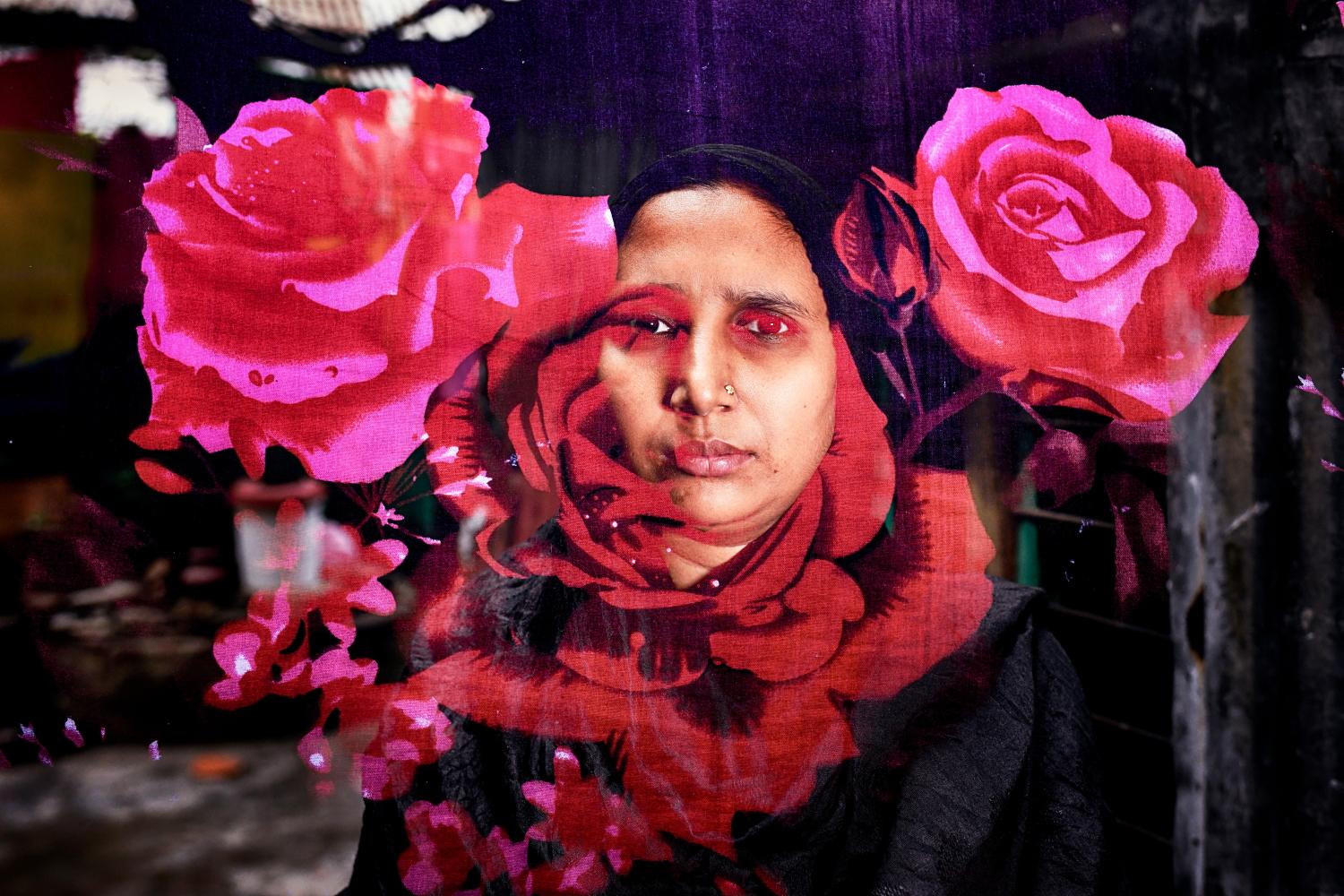 7 of 12 © 2023 Fabeha Monir
Rozina begum (36) recalls how she has to face verbal harassment and unpleasant approaching when she started working in textile industry nine years ago. Her own experience helped her to become a textile union leader so she can speaks about harassment and exploitation. Tongi, Bangladesh 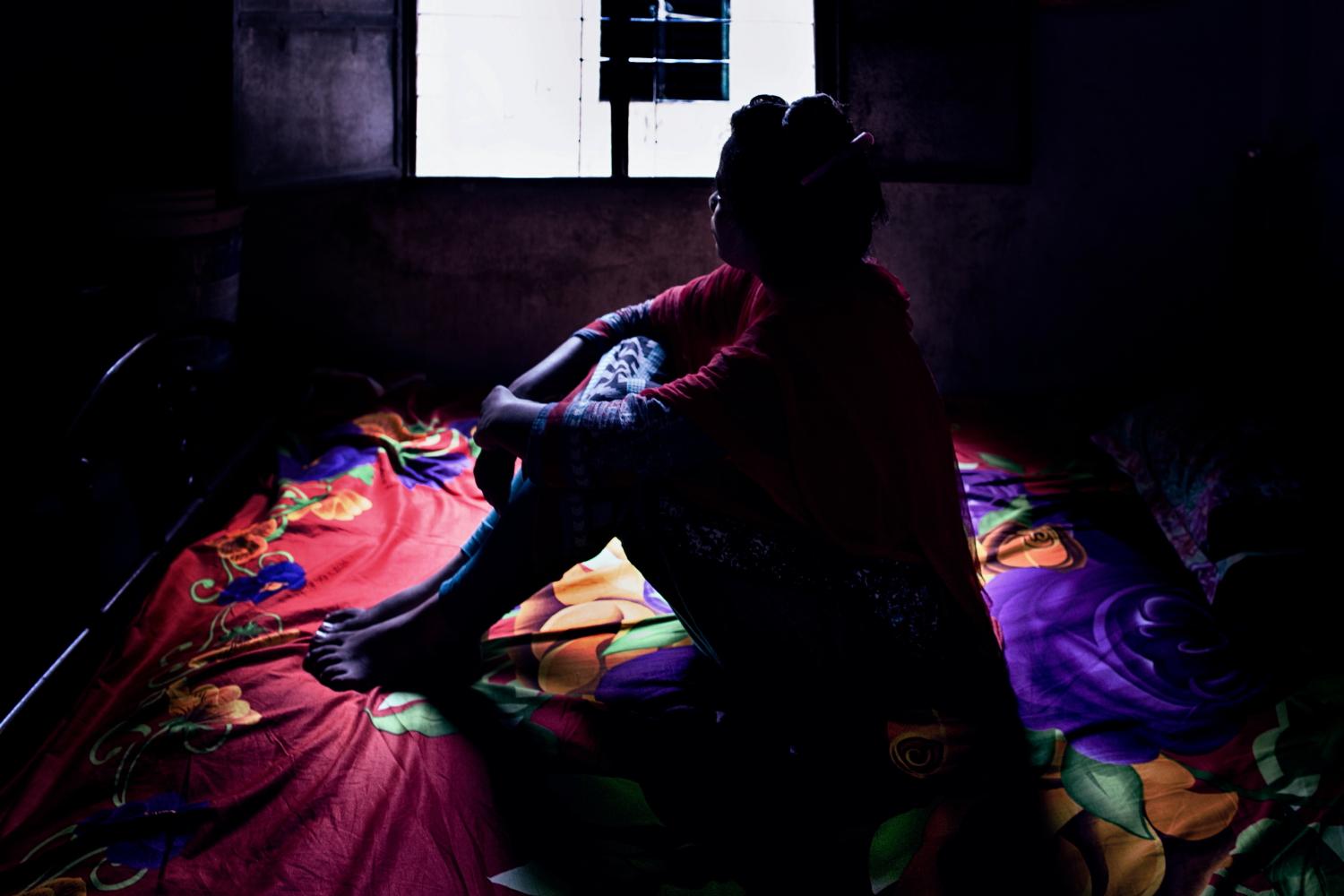 8 of 12 © 2023 Fabeha Monir
Hafsa Begum (20) relocated herself after filing complaint about her assault. She says, ‘Female workers lives are in danger if they come forward about sexual harassment.’ Tongi, Bangladesh 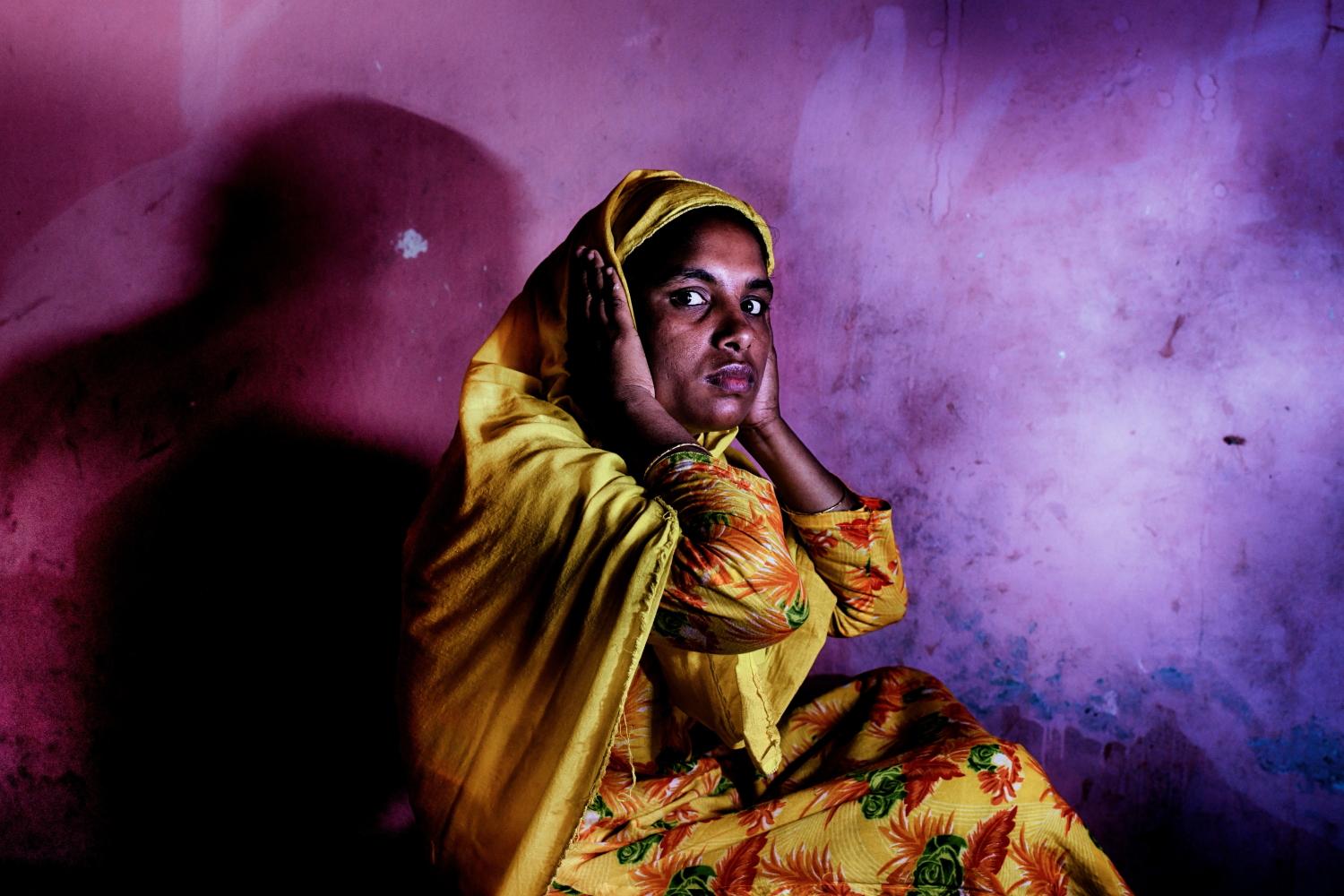 9 of 12 © 2023 Fabeha Monir
Textile worker Razia Begum (30) was beaten by her husband when she refused to give last saving 100 taka (1 USD) to her textile worker husband. In pain, with scars Razia is unable to seek help and having hearing problems now. Due to Covid19 lock down she can not go to any hospital for treatment. Tongi, Bangladesh 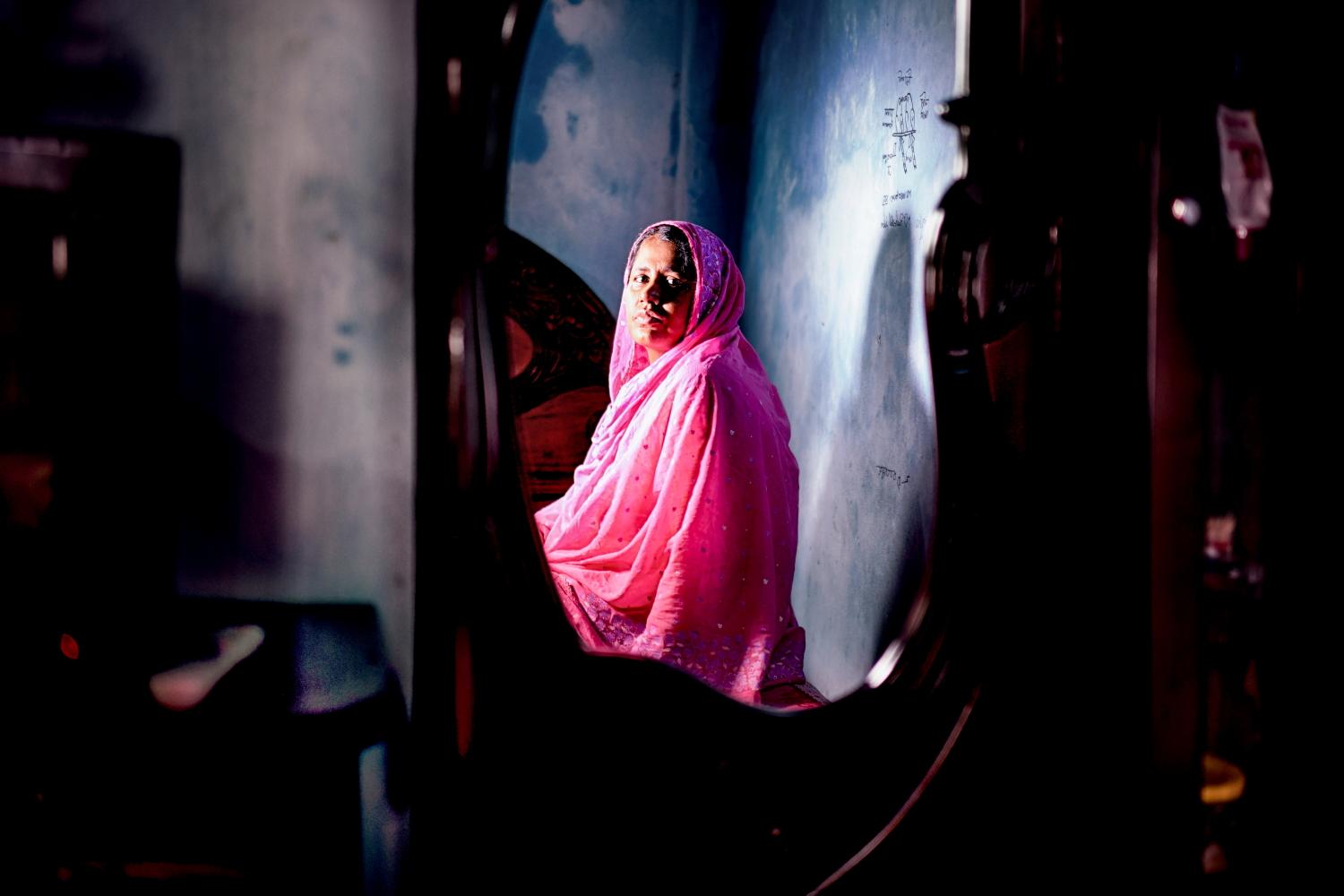 10 of 12 © 2023 Fabeha Monir
Portrait of textile worker Morzina Begum (40) inside her house. Tongi, Bangladesh. She has been fighting against sexual violence for textile workers for decade and later dismissed from her job. "I was dismissed from my job not because of Corona Virus, or order cancellation. It's because I was voicing for worker's right, I wanted to give justice to female Textile workers who were routinely facing abuse and injustice". Tongi, Bangladesh 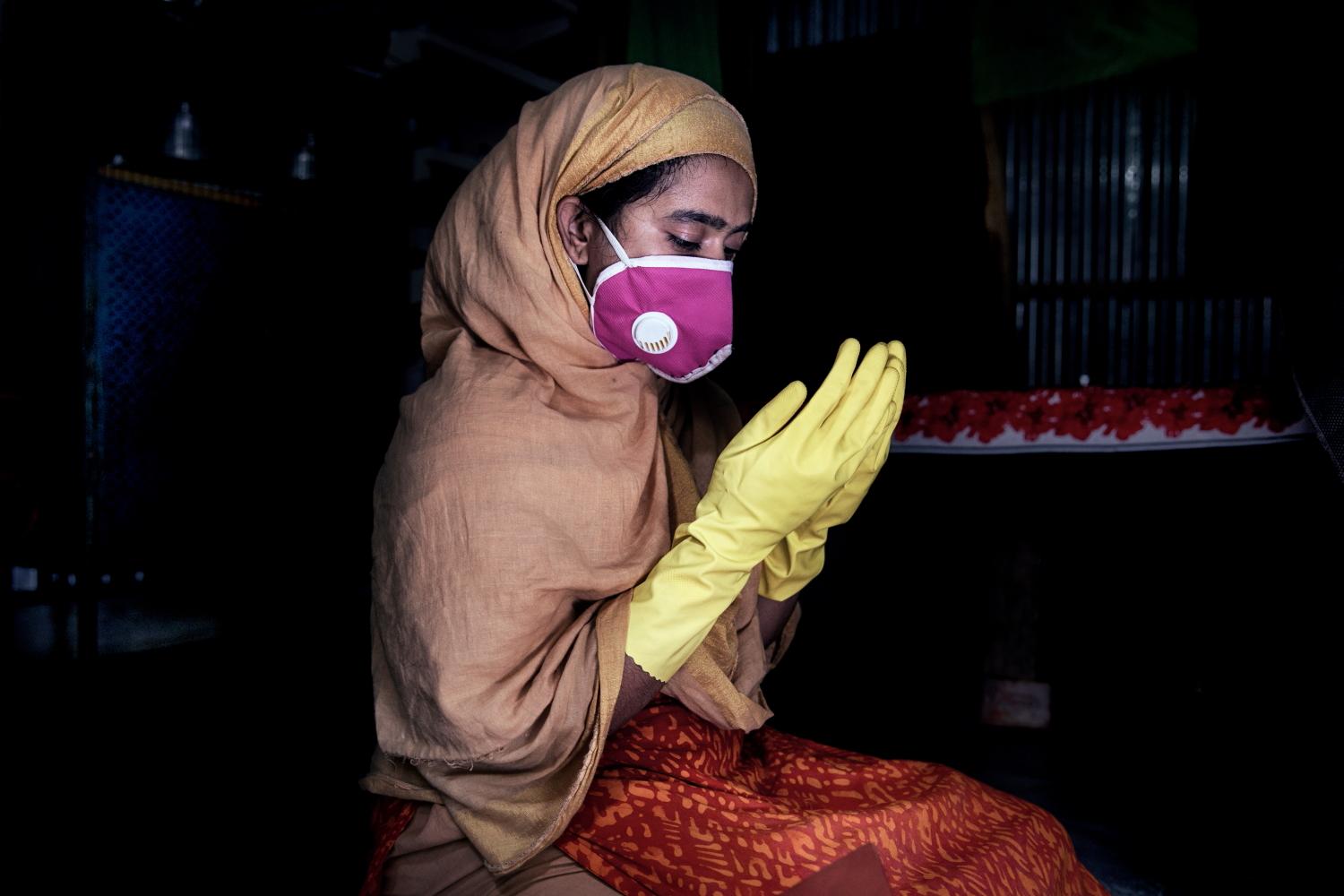 11 of 12 © 2023 Fabeha Monir
21 years old, Textile worker Pinky s praying inside her room who has been abused by her husband and left alone with her son."There was no one to help me when my husband tortured me every night. It was intolerable but I could not report to my factory. I did not want to lose my job". Korail Slum, Dhaka, Bangladesh 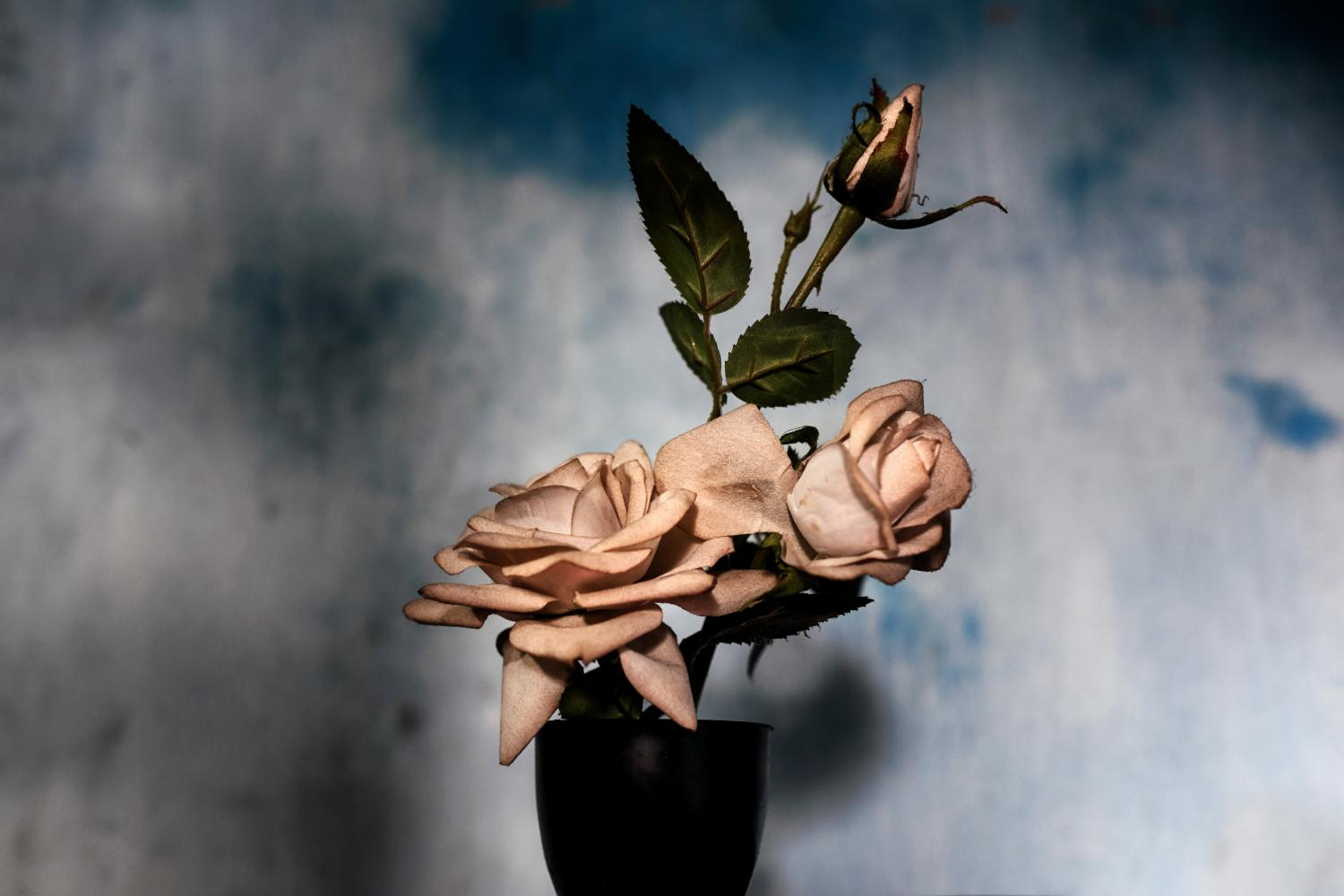 Public Story
Life under needle
Copyright Fabeha Monir 2023
Updated Aug 2020
Topics Editorial, Photography, Photojournalism, Portraiture, Spotlight, Womens Rights
Life Under Needle
In May Hafsa Begum (20) had finished a night shift at her factory job and was eager to get home after working overtime to fulfill orders ahead of the Eid al-Fitr holiday.
“I was extremely tired since I’d been working since eight o’clock in the morning and was walking slow. The other girls walked ahead of me and that’s when my line manager seized the opportunity. I kicked and slapped him but he still managed to drag me into a dark alley next to the factory,” Begum explained. She says he forcefully kissed and touched her. Before letting her go, the line manager told her, “I told you, you’re going to be mine.” In the seven months she’d been working at the factory, Begum had faced harassment from her line manager, who wielded power over junior machine operators.
There are estimated 2.5m textile workers – mostly women – working in more than 4,200 garment factories in Bangladesh. After the collapse of the Rana Plaza factory in 2013, where more than 1,000 workers lost their lives, the Bangladeshi government and western brands promised to facilitate the presence of unions inside factories and improve worker safety. Yet there remains very little focus on the gender-based violence and exploitation routinely faced by female workers. According to recent research, 80% of them either experience or witness sexual abuse or harassment at work. Yet few feel able to report this abuse or seek justice.
A deep-rooted fear of shame and reprisals is helping to silence the victims of sexual violence within Bangladesh’s garment industry. 'The Cost of Your Clothes' - uses participatory documentary work and investigates perspectives about the sociocultural aspects of gender based violence in textile industry. The first step to changing injustices in today’s society is to collaboratively imagine with disadvantaged communities what a more just future could look like, then visualize that new reality through story telling so that others, especially those who have the power to change society (consumers, worker unions, brands policy makers) can be exposed to new perspectives on where things still need to change. To initiate dialogue between those who have the power to change society and those who live through these issues of poverty, injustice, and gender based violence.

The Cost of Your Clothes

My feet to dance and convey a story

Life Under The Needle