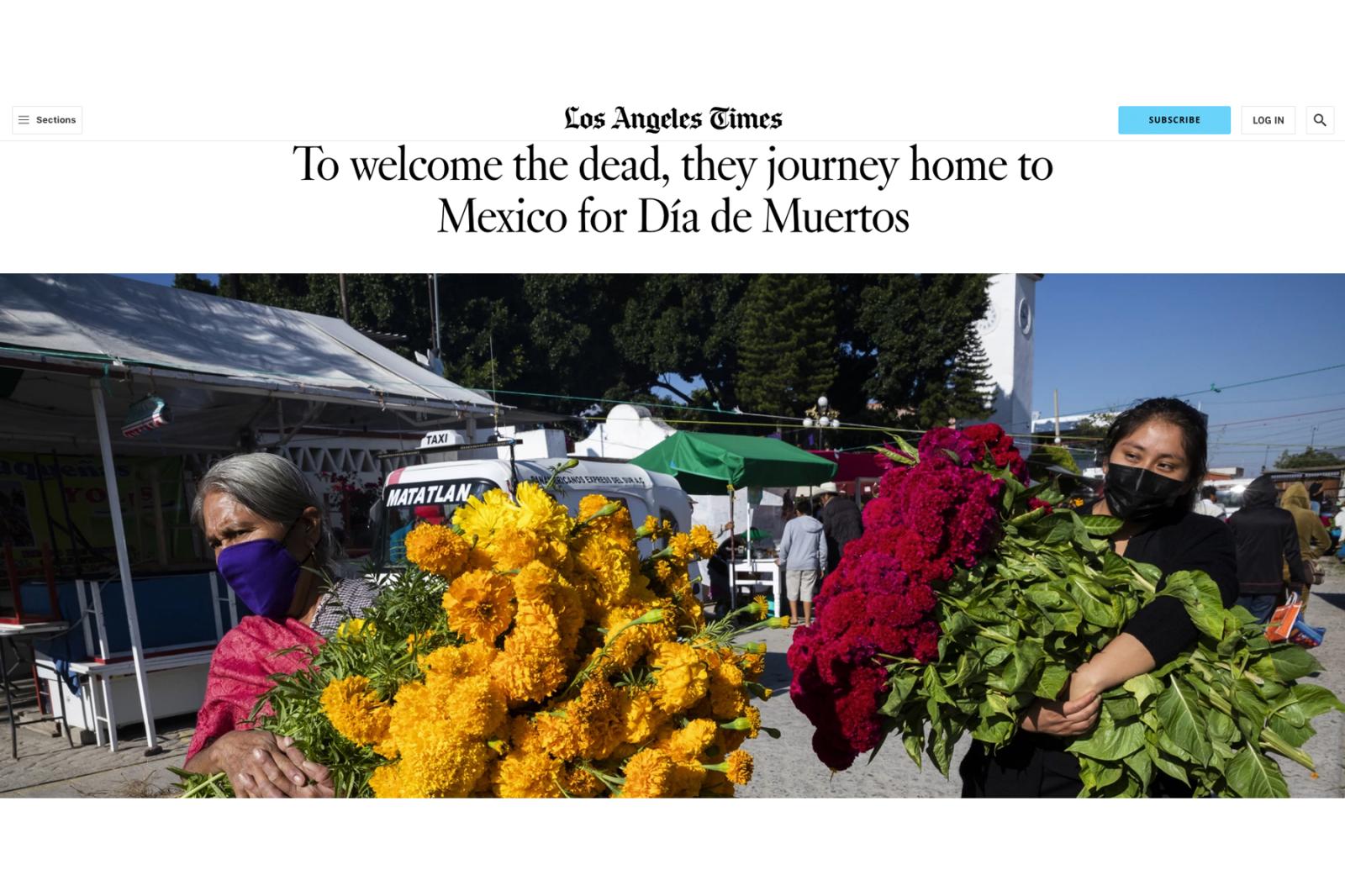 1 of 14 © 2023 Eva Lepiz
Maria Hernandez and her daughter Maria Santiago walk away from the market after buying flowers and food for their altar for the Day of the Dead.
(Eva Lepiz / For The Times) 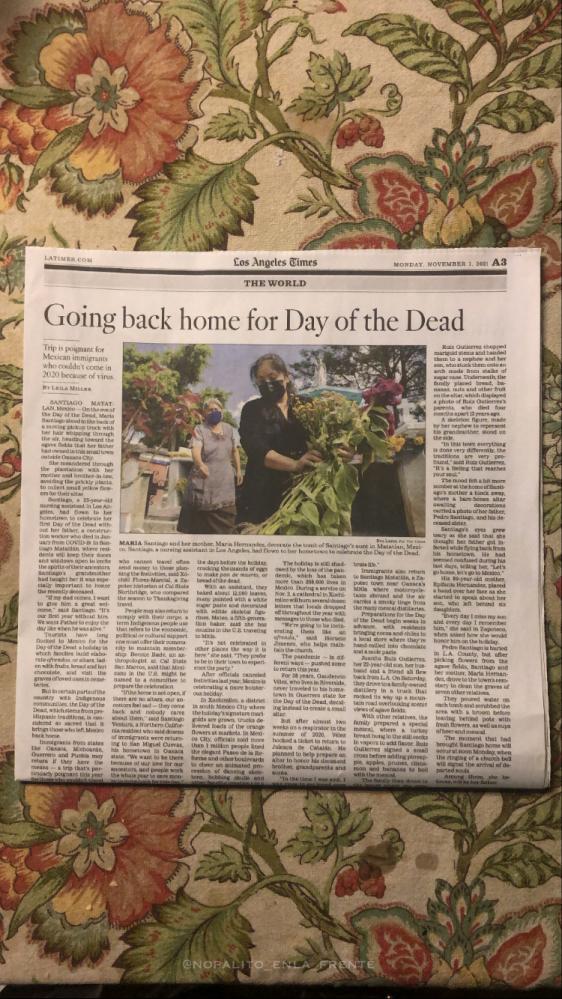 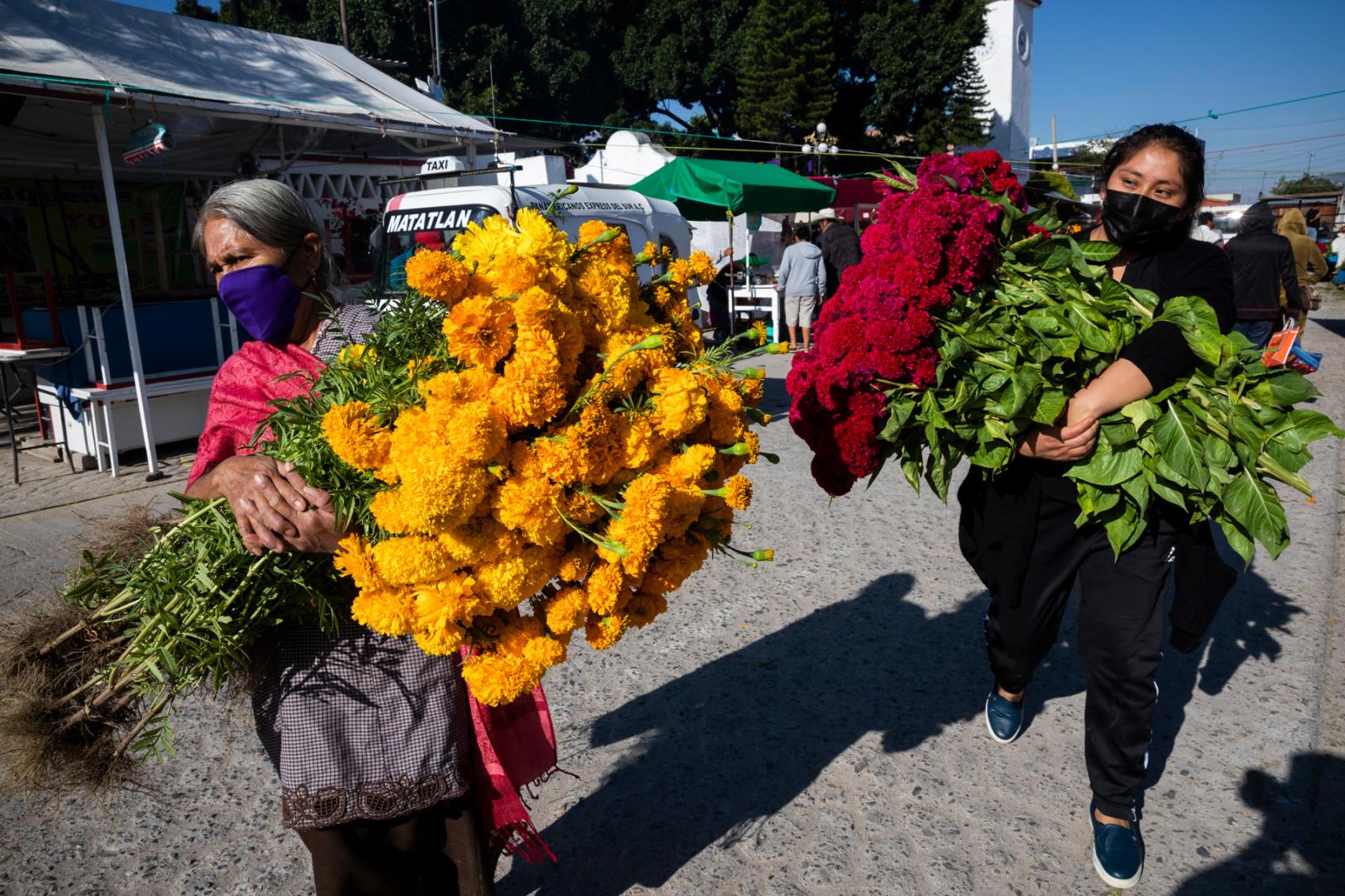 3 of 14 © 2023 Eva Lepiz
Maria Hernandez and her daughter Maria Santiago walk away from the market after buying flowers and food for their altar for the Day of the Dead.
(Eva Lepiz / For The Times)


October 31st, 2021. Matatlan, Oaxaca, Mexico. Maria Hernandez, 63, and Maria Santiago, 25; walking away from the market after buying flowers and food for the altars for day of the dead celebration, dedicated to the relatives who passed away. 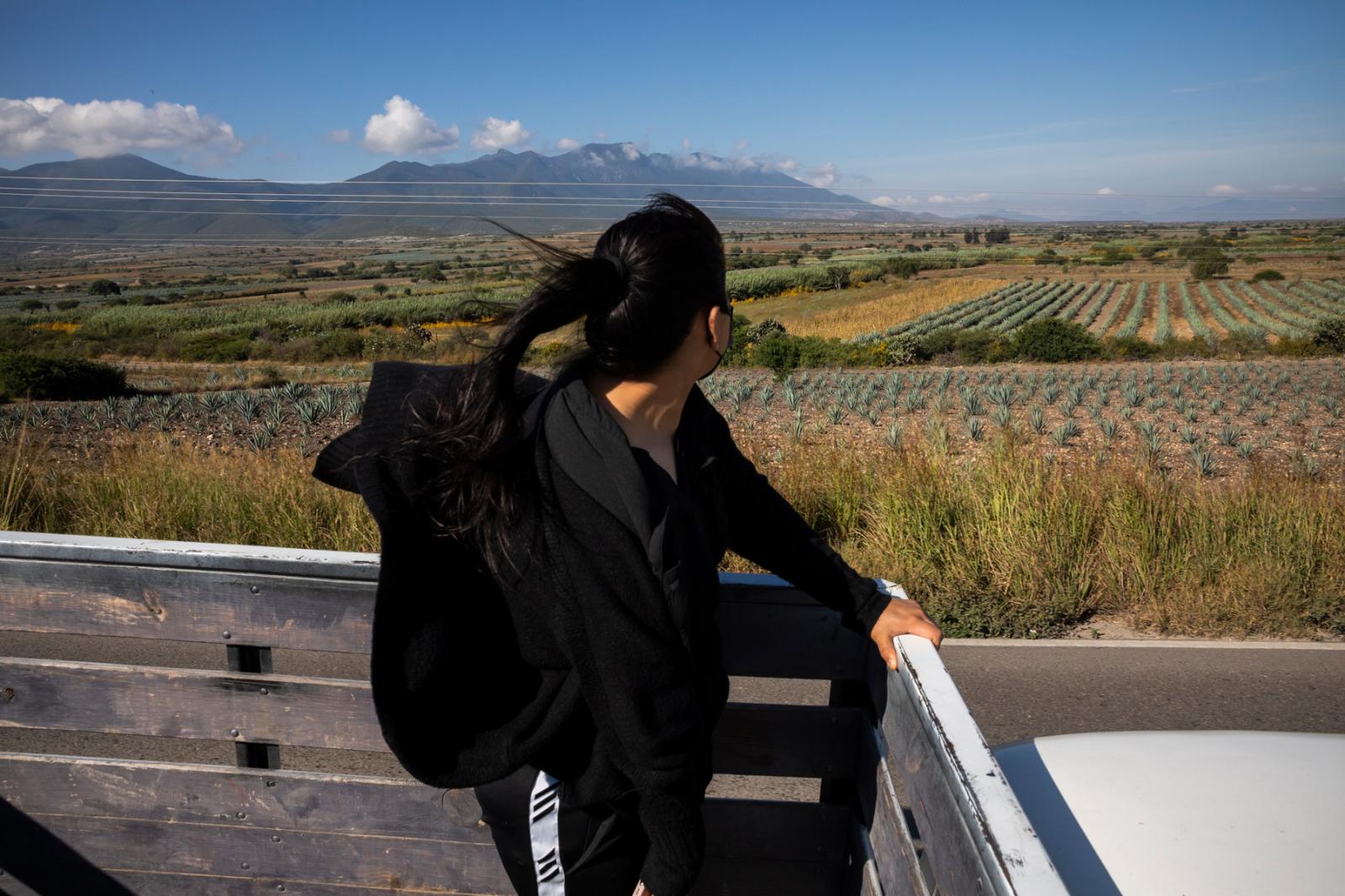 4 of 14 © 2023 Eva Lepiz
Maria Santiago passes by the agave fields in her hometown, Santiago Matatlan, in Mexico’s Oaxaca state.
(Eva Lepiz / For The Times)

October 31st, 2021. Matatlan, Oaxaca, Mexico. Maria Santiago 25, passing by the maguey fields in her hometown. Matatlan is a village that produces Mezcal beverage, Maria is thinking about making a palenque distillery to produce mezcal. 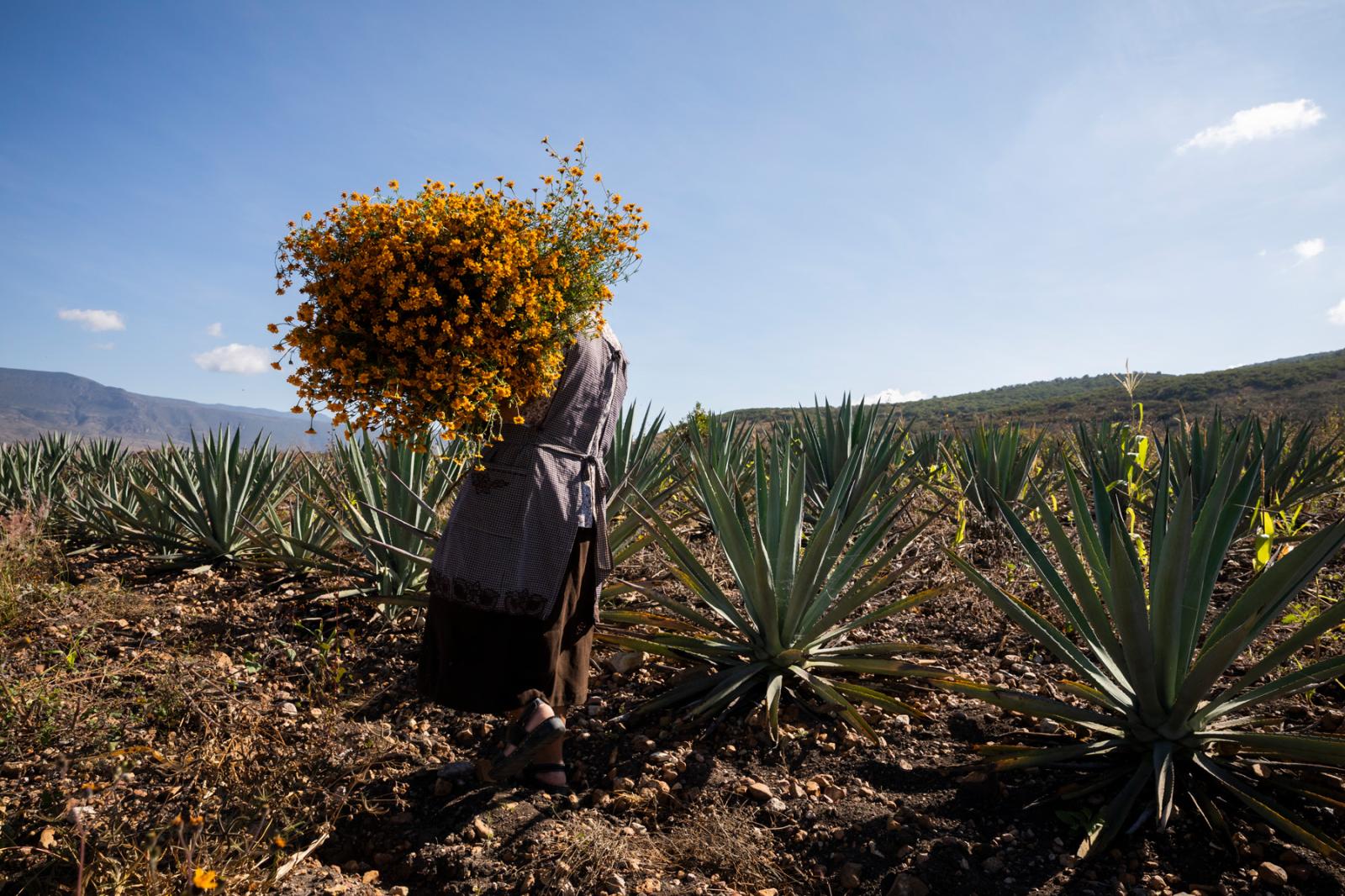 5 of 14 © 2023 Eva Lepiz
Maria Hernandez walks through an agave field that belonged to her husband, Pedro Santiago, after cutting wildflowers for his Day of the Dead altar.
(Eva Lepiz / For The Times)

October 31st, 2021. Matatlan, Oaxaca, Mexico. Maria Hernandez, 63, walking away from the maguey field that belonged to her husband Pedro Santiago, after cutting wild flowers "rosamuerto" for the altar for day of the dead celebration, dedicated to Pedro Santiago and Felipa Santiago. 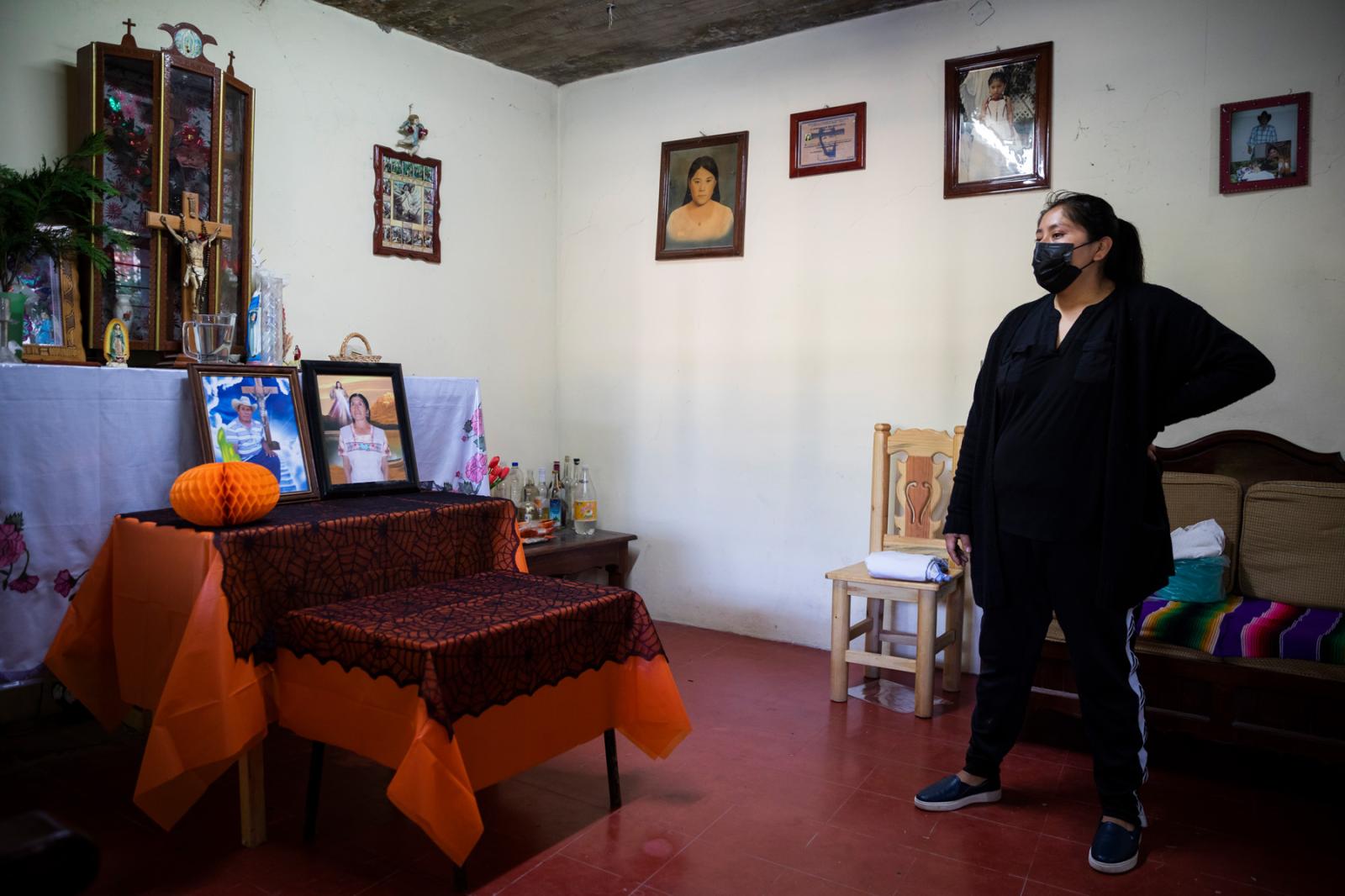 October 31st, 2021. Matatlan, Oaxaca, Mexico. Maria Santiago, telling the story about how her father passed away in California, after he returned from a visit he did to his family in his hometown; at the altar in her mother’s house. 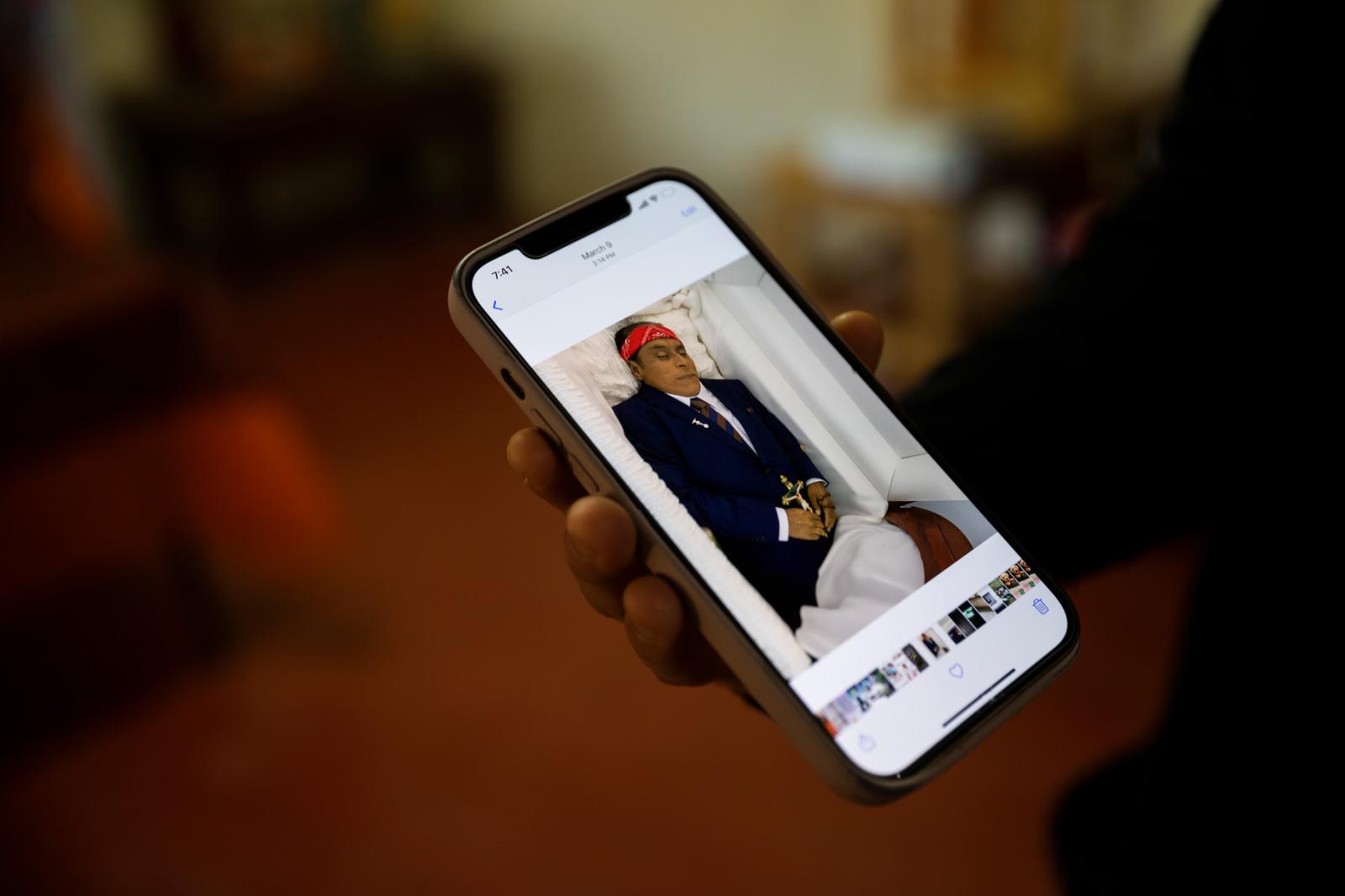 October 31st, 2021. Matatlan, Oaxaca, Mexico. Maria Santiago showing a picture of her father Pedro Santiago laying in his coffin for his funeral in California. 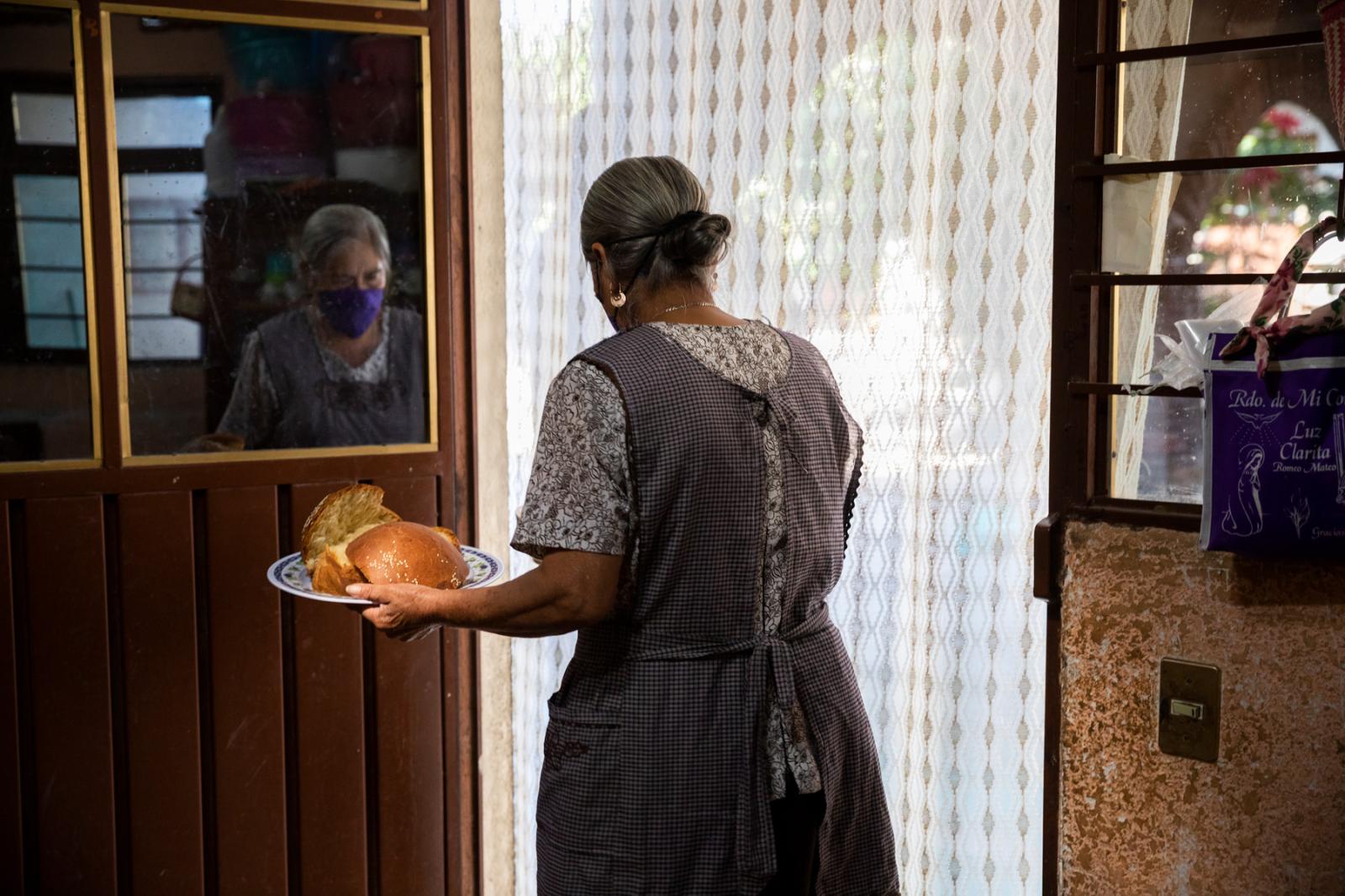 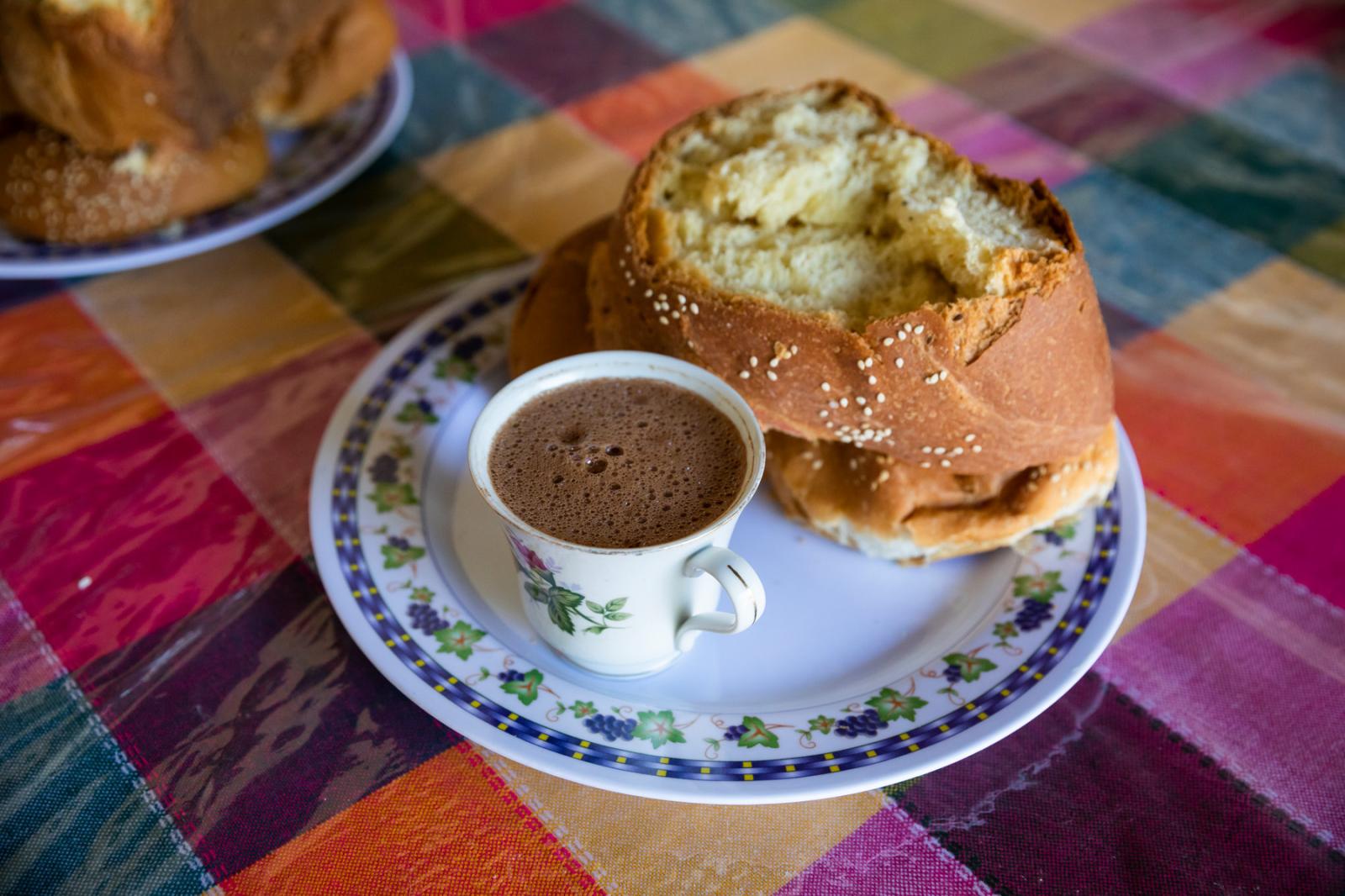 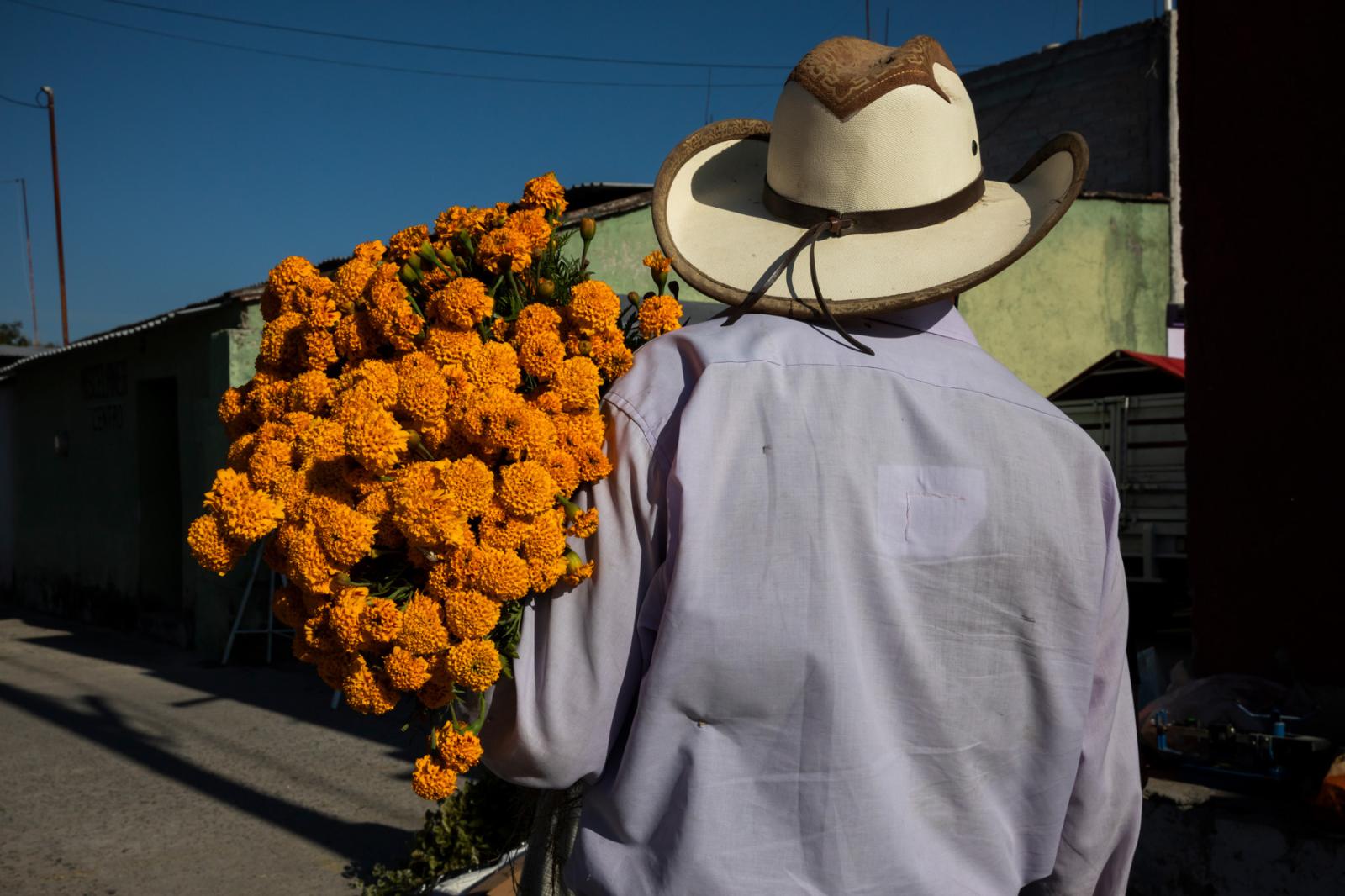 10 of 14 © 2023 Eva Lepiz
October 31st, 2021. Matatlan, Oaxaca, Mexico. A man carries flowers for the altars dedicated to the people who passed away, at the local market in Matatlan 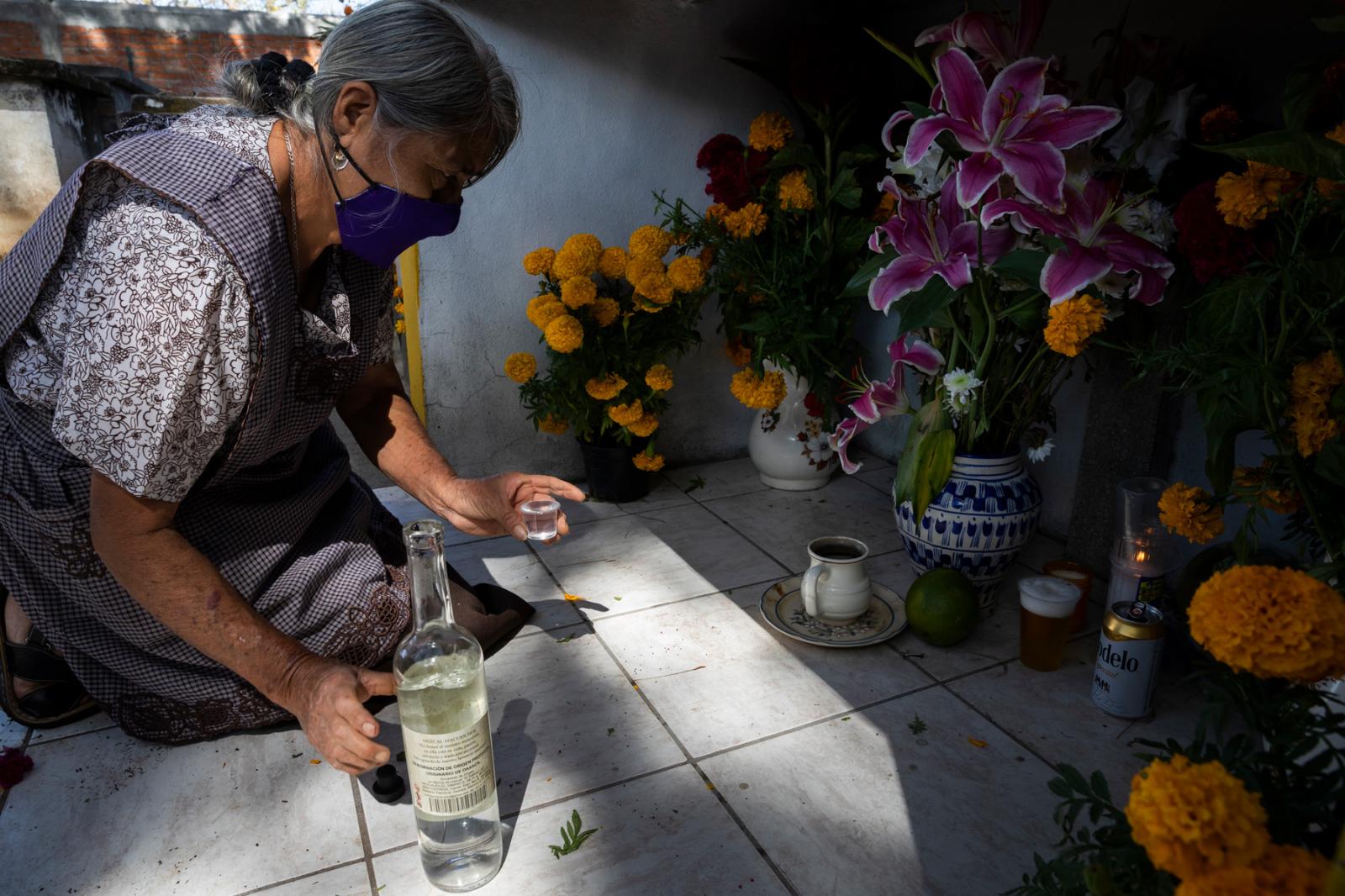 11 of 14 © 2023 Eva Lepiz
Maria Santiago prepares mezcal to place on a tomb in a cemetery in Santiago Matatlan.
(Eva Lepiz / For The Times)

October 31st, 2021. Matatlan, Oaxaca, Mexico. Maria Hernandez, 63, putting mezcal, for the altar and offering dedicated to Rafael Martinez at the graveyard in Matatlan for day of the dead celebration 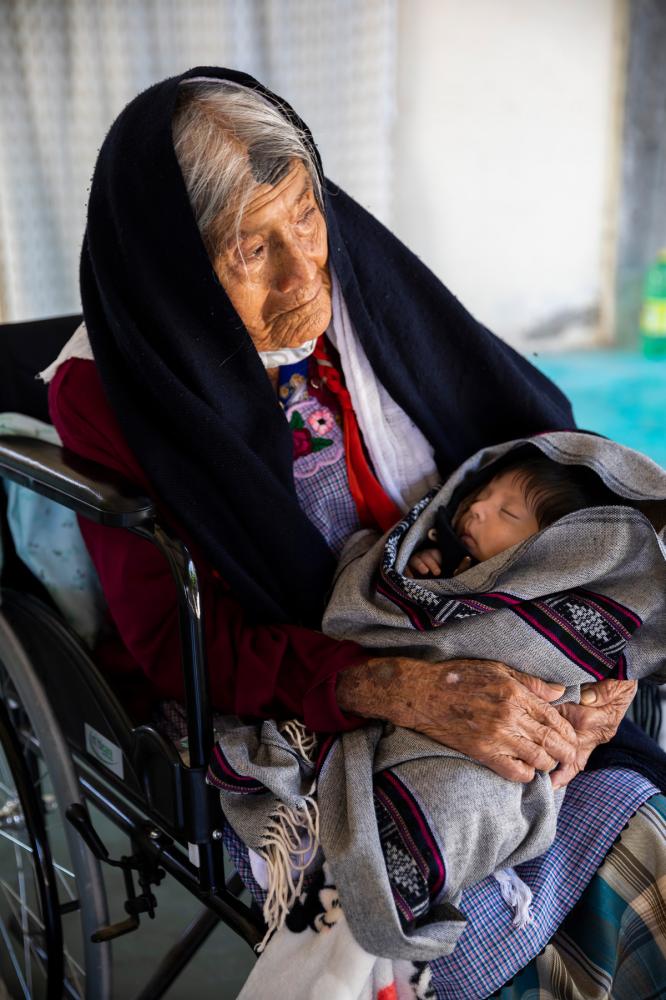 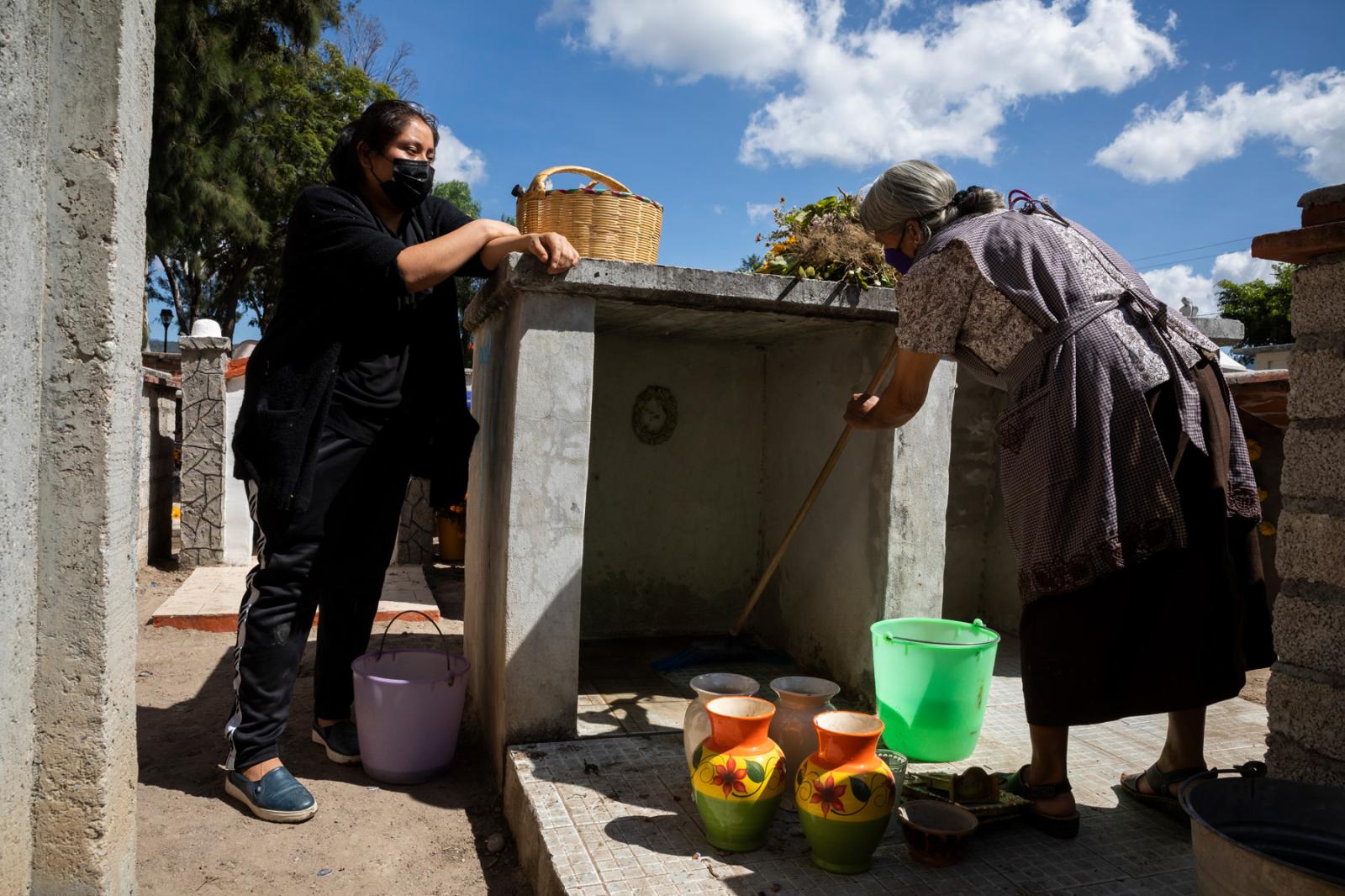 13 of 14 © 2023 Eva Lepiz
Maria Santiago and Maria Hernandez clean graves and leave offerings for relatives.
(Eva Lepiz / For The Times)

October 31st, 2021. Matatlan, Oaxaca, Mexico. Maria Santiago, 25, and Maria Hernandez, 63, cleaning and putting offerings and altars for their relatives at the graveyard in Matatlan, for day of the dead celebration 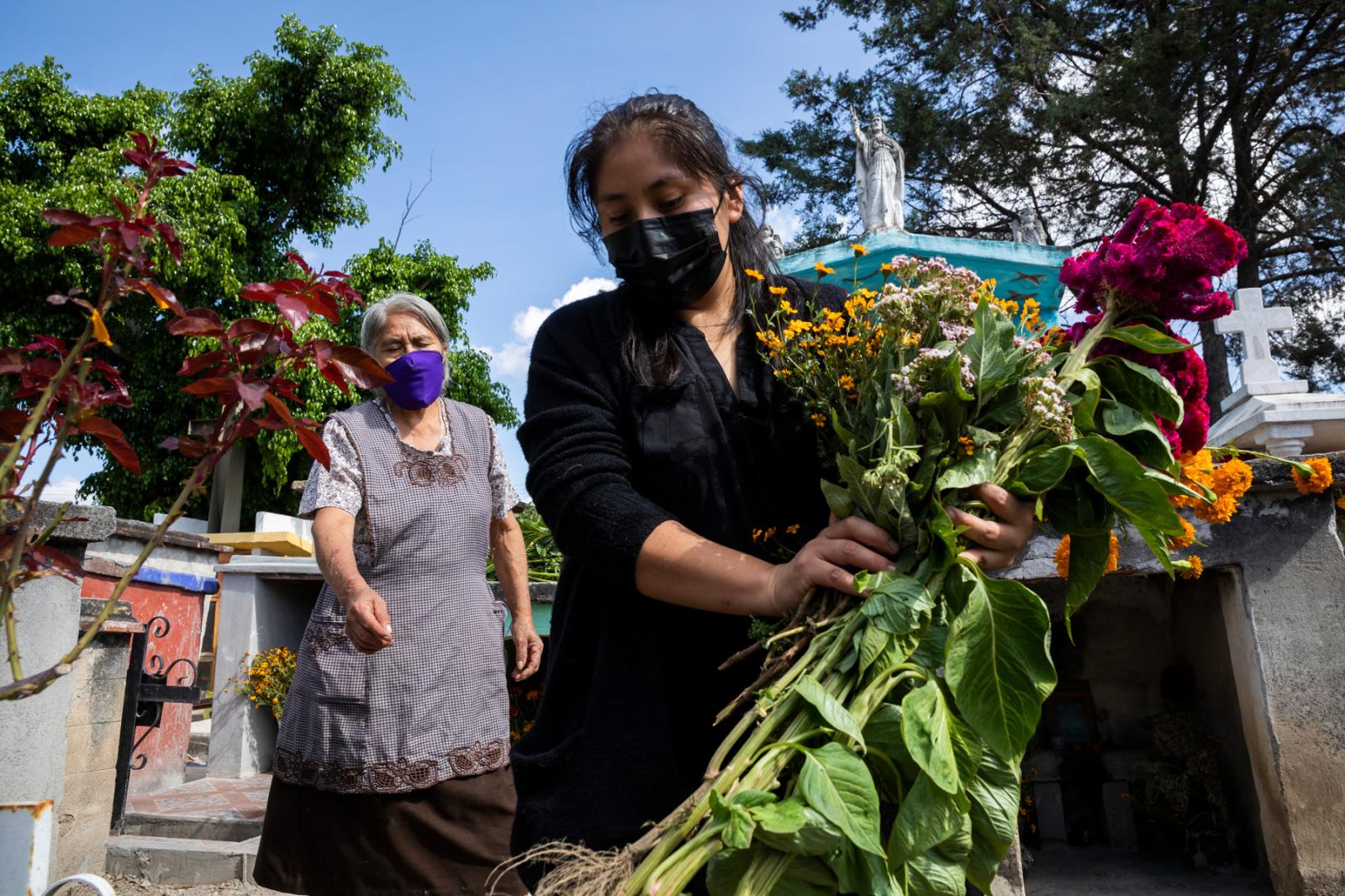 14 of 14 © 2023 Eva Lepiz
October 31st, 2021. Matatlan, Oaxaca, Mexico. Maria Hernandez, 63, and Maria Santiago, 25. cleaning and putting flowers at the tomb of her aun Felipa Santiago in the graveyard of Matatlan.
Close

To welcome the dead, they journey home to Mexico for Día de Muertos

On the eve of the Day of the Dead, Maria Santiago stood in the back of a moving pickup truck with her hair whipping through the air, heading toward the agave fields that her father had owned in this small town outside Oaxaca City.

She meandered through the plantation with her mother and brother-in-law, avoiding the prickly plants, to collect small yellow flowers for their altar.

Santiago, a 25-year-old nursing assistant in Los Angeles, had flown to her hometown to celebrate her first Day of the Dead without her father, a construction worker who died last January from COVID-19. In Santiago Matatlán, where residents will keep their doors and windows open to invite the spirits of their ancestors, Santiago’s grandmother had taught her it was especially important to honor the recently deceased.

“If my dad comes, I want to give him a great welcome,” said Santiago. “It’s our first year without him. We want Father to enjoy the day like when he was alive.”

Tourists have long flocked to Mexico for the Day of the Dead, a holiday in which families build elaborate ofrendas, or altars, laden with fruits, bread and hot chocolate, and visit the graves of loved ones in cemeteries.

But in certain parts of the country with indigenous communities, the Day of the Dead, which stems from pre-Hispanic traditions, is considered so sacred that it brings those who left Mexico back home.

Immigrants from states like Oaxaca, Michoacán, Guerrero and Puebla may return if they have the means — a trip that’s particularly poignant this year for those who couldn’t travel in 2020 because of pandemic restrictions.

It’s unclear exactly how many go back, but experts say that some tiny villages swell in size. Immigrants who cannot travel often send money to those planning the festivities, said Xóchitl Flores-Marcial, a Zapotec historian at Cal State Northridge, who compared the season to Thanksgiving travel.

People may also return to comply with their cargo, a term indigenous people use that refers to the economic, political or cultural support one must offer their community to maintain membership. Bonnie Bade, an anthropologist at Cal State San Marcos, said that Mexicans in the U.S. might be named to a committee to prepare the celebration.

“If the home is not open, if there are no altars, our ancestors feel sad — they come back and nobody cares about them,” said Santiago Ventura, a northern California resident who said dozens of immigrants were returning to San Miguel Cuevas, his hometown in Oaxaca state. “We want to be there because of our love for our ancestors, and people work the whole year to save money to come back for this day.”

At a bakery in Mitla, a town about 45 minutes from Oaxaca City known for its ancient ruins, Areida Mateo and her husband, Romayro Sosa, worked overnight in the days before the holiday, cracking thousands of eggs to make pan de muerto, or bread of the dead.

With an assistant, they baked about 12,000 loaves, many painted with a white sugar paste and decorated with edible skeletal figurines. Mateo, a fifth-generation baker, said she has cousins in the U.S. traveling to Mitla.

“It’s not celebrated in other places the way it is here,” she said. “They prefer to be in their town to experience the party.”

In Xochimilco, a district in southern Mexico City where the holiday’s signature marigolds are grown, trucks delivered loads of the orange flowers at markets. In Mexico City, officials said more than 1 million people lined the elegant Paseo de la Reforma and other boulevards to cheer an animated procession of dancing skeletons, bobbing skulls and other fanciful creations in a tribute to both the departed and to Hollywood. The annual parade, canceled last year, was inspired by a scene in the 2015 James Bond thriller “Spectre.”

The holiday is still shadowed by the loss of the pandemic, which has taken more than 288,000 lives in Mexico. During a service on Nov. 2, a cathedral in Xochimilco will burn several dozen letters that locals dropped off throughout the year with messages to those who died.

“We’re going to be incinerating them like an ofrenda,” said Horacio Jimenez, who helps maintain the church.

The pandemic — in different ways — pushed some to return this year.

For 38 years, Gaudencio Vélez, who lives in Riverside, never traveled to his hometown in Guerrero state for the Day of the Dead, deciding instead to create a small altar.

But after almost two weeks on a respirator in the summer of 2020, Vélez booked a ticket to return to Jaleaca de Catalán. He planned to help prepare an altar to honor his deceased brother, grandparents and aunts. In his town, many put a bottle of Coca-Cola on the altar, a common drink with meals.

“In the time I was sick, I was close to my loved ones who have already passed,” said Vélez, the president of the Guerrero Binational Federation based in Santa Ana. “To be alive now … I think that’s a reason to celebrate life.”

Immigrants also return to Santiago Matatlán, a Zapotec town near Oaxaca’s Mitla where motorcycle-taxis abound and the air carries a smoky tinge from the many mezcal distilleries.

Preparations for the Day of the Dead begin weeks in advance, with residents bringing cocoa and chiles to a local store where they’re hand-milled into chocolate and a mole paste.

With other relatives, the family prepared a special mezcal, where a turkey breast hung in the still cooks in vapors to add flavor. Ruiz Gutierrez signed a small cross before adding a cartload of pineapple, apples, prunes, cinnamon and bananas to boil with the mezcal and said a blessing in Zapoteco.

The family then drove to the house where she grew up, now occupied by her brother’s family. The smell of fresh marigolds mixed with bread of the dead as Gutierrez’s sister-in-law, a baker, rushed to fill orders.

Ruiz Gutierrez chopped marigold stems and handed them to a nephew and her son, who stuck them onto an arch made from stalks of sugar cane. Underneath, the family placed bread, bananas, nuts and other fruit on the altar, which displayed a photo of Ruiz Gutierrez’s parents, who died four months apart 13 years ago.

A skeleton figure, made by her nephew to represent his grandmother, stood on the side.

“In this town everything is done very differently, the traditions are very profound,” said Ruiz Gutierrez. “It’s a feeling that reaches your soul.”

The mood felt a bit more somber at the home of Santiago’s mother a block away, where a bare bones altar awaiting decorations carried a photo of her father, Pedro Santiago, and his deceased sister.

Santiago’s eyes grew teary as she said that she thought her father got infected while flying back from his hometown. He had seemed confused during his last days, telling her, “Let’s go home, let’s go to Mexico.”

His 89-year-old mother, Epifania Hernandez, placed a hand over her face as she started to speak about her son, who left behind six daughters.
“Every day I miss my son and every day I remember him,” she said in Zapoteco, when asked how she would honor him on the holiday.

Pedro Santiago is buried in L.A. County, but after picking flowers from the agave fields, Santiago and her mother, Maria Hernandez, drove to the town’s cemetery to clean the graves of seven other relatives.

They poured buckets of water on each tomb and scrubbed the area with a broom before leaving behind pots with fresh flowers, as well as cups of beer and mezcal.

The next few hours would continue with ritual. Santiago’s sister would slaughter a turkey bought a year earlier to eat with mole. Her mother would wake up on Monday at 4 or 5 a.m. to open the door for visitors coming by with offerings.

But the moment that had brought Santiago home will occur at noon, when the ringing of a church bell will signal the arrival of departed souls.

Among them, she believes, will be her father.

Are grasshoppers as delicious as ham? Mexico’s insect hunters would like you to find out. Los Angeles Times

The Washington Post: Tourists are welcome in Oaxaca, Mexico. Their increasingly bad behavior is not.

The Ones Who Stayed Behind. Americas Quarterly.