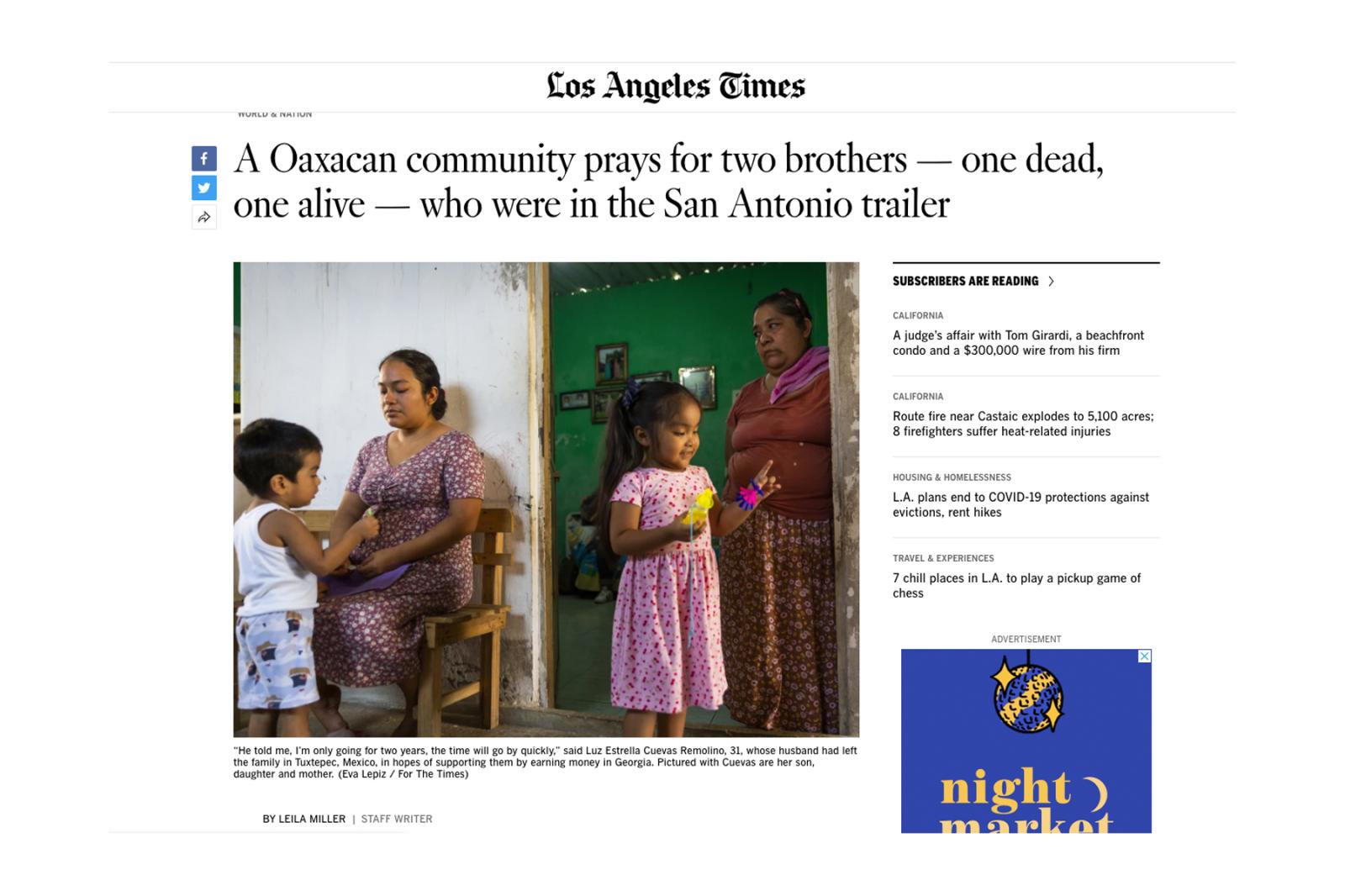 1 of 9 © 2023 Eva Lepiz
“He told me, I’m only going for two years, the time will go by quickly,” said Luz Estrella Cuevas Remolino, 31, whose husband had left the family in Tuxtepec, Mexico, in hopes of supporting them by earning money in Georgia. Pictured with Cuevas are her son, daughter and mother.
(Eva Lepiz / For The Times) 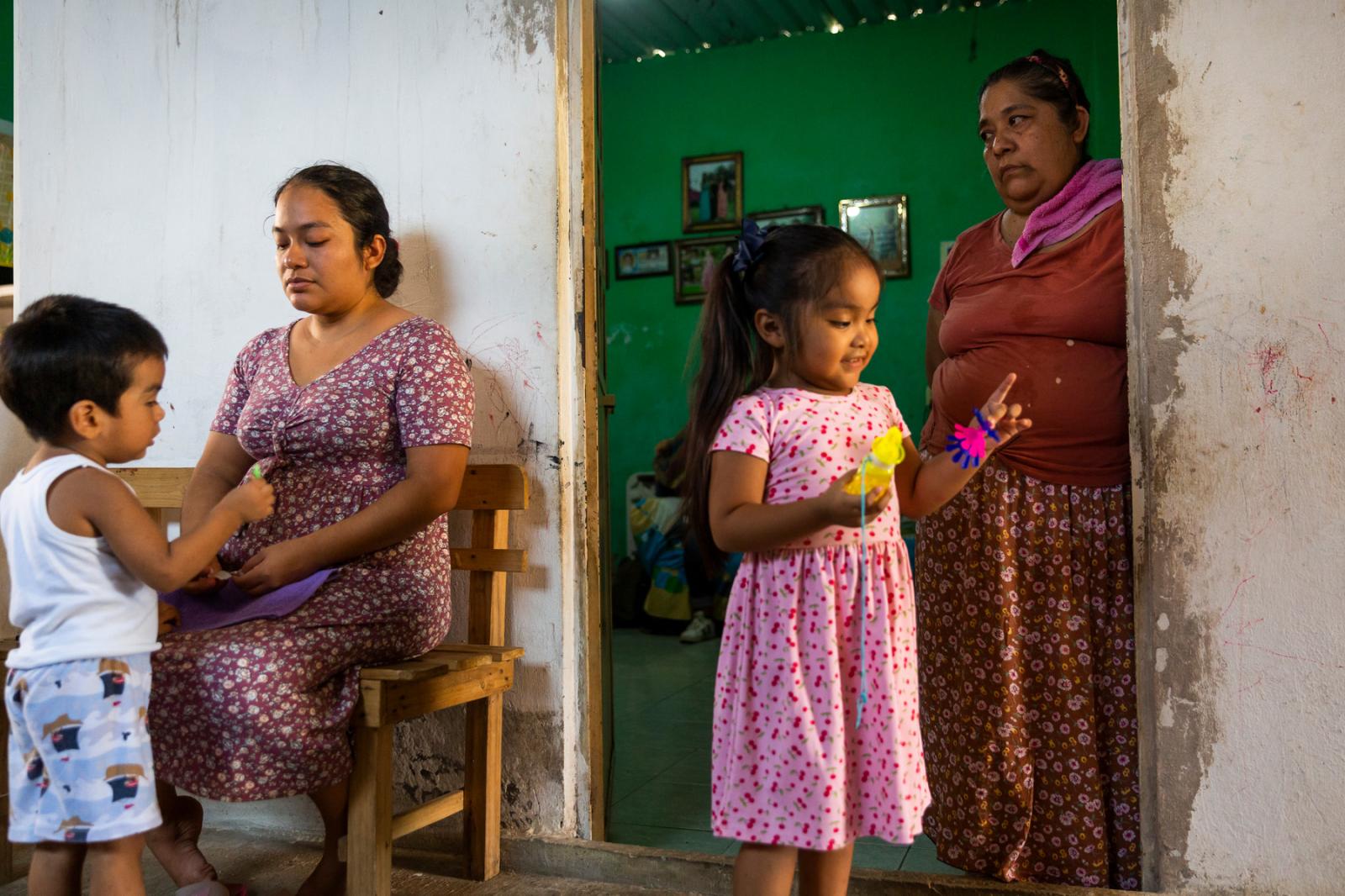 2 of 9 © 2023 Eva Lepiz
“He told me, I’m only going for two years, the time will go by quickly,” said Luz Estrella Cuevas Remolino, 31, whose husband had left the family in Tuxtepec, Mexico, in hopes of supporting them by earning money in Georgia. Pictured with Cuevas are her son, daughter and mother.
(Eva Lepiz / For The Times) 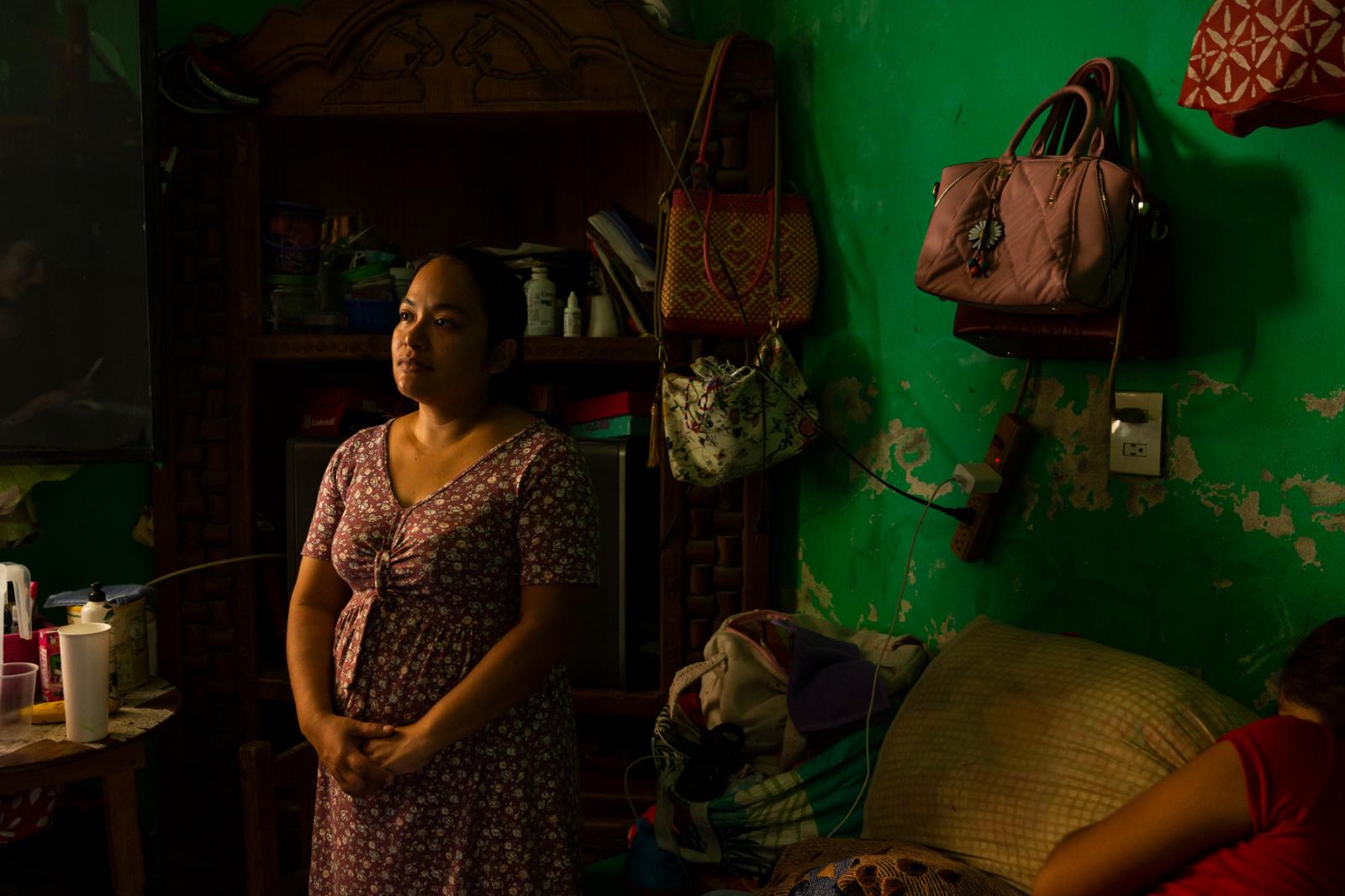 3 of 9 © 2023 Eva Lepiz
Luz Estrella Cuevas Remolino in her bedroom, where she first saw a news report about the tragedy.
(Eva Lepiz / For The Times)


July 1, 2022. Tuxtepec, Oaxaca, Mexico. Luz Estrella Cuevas Remolino, 31, at the room where she saw the news on the television placed behind her. 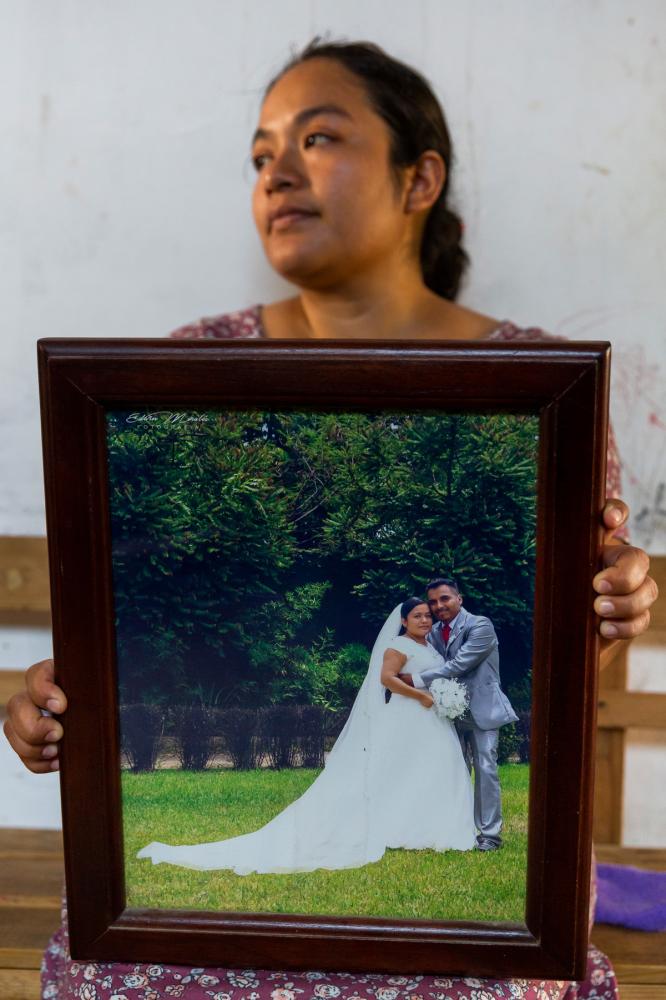 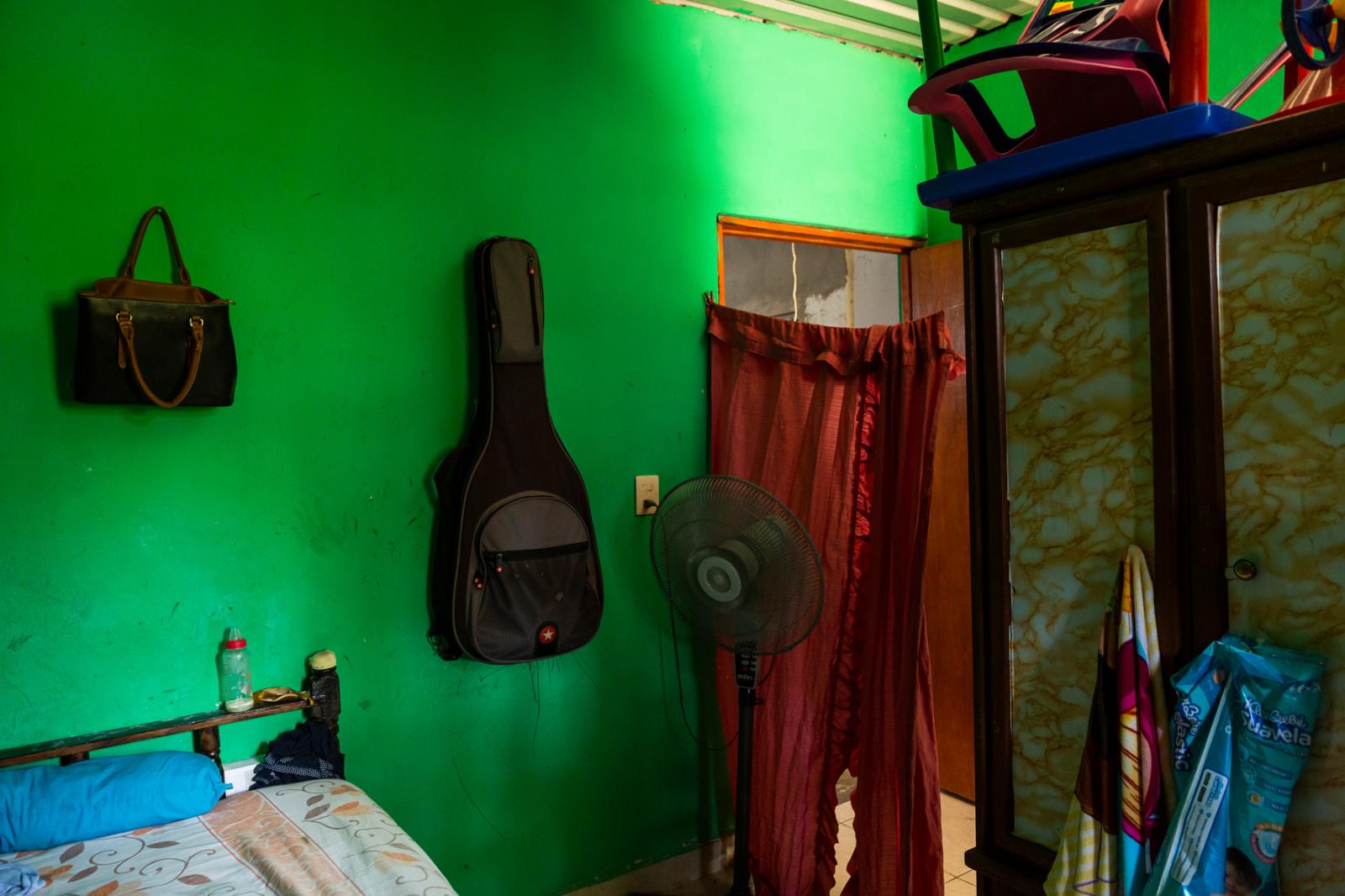 July 1, 2022. Tuxtepec, Oaxaca, Mexico. The Guitar Mariano Santiago Hipólito used to play at the church congregation, seen at his house. 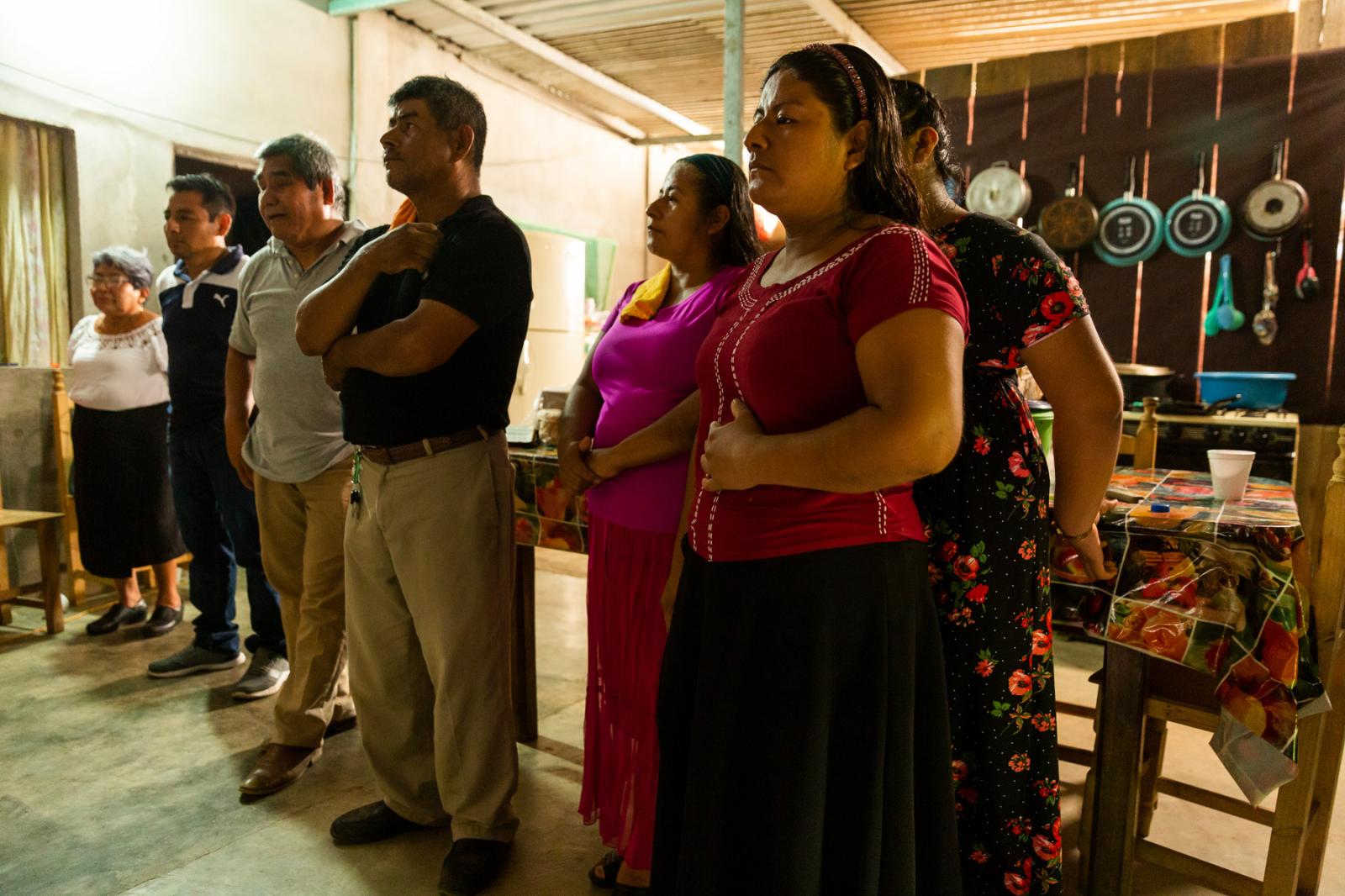 6 of 9 © 2023 Eva Lepiz
Church members and relatives pray at the home of Maria Antonia Torres Morales.
(Eva Lepiz / For The Times) 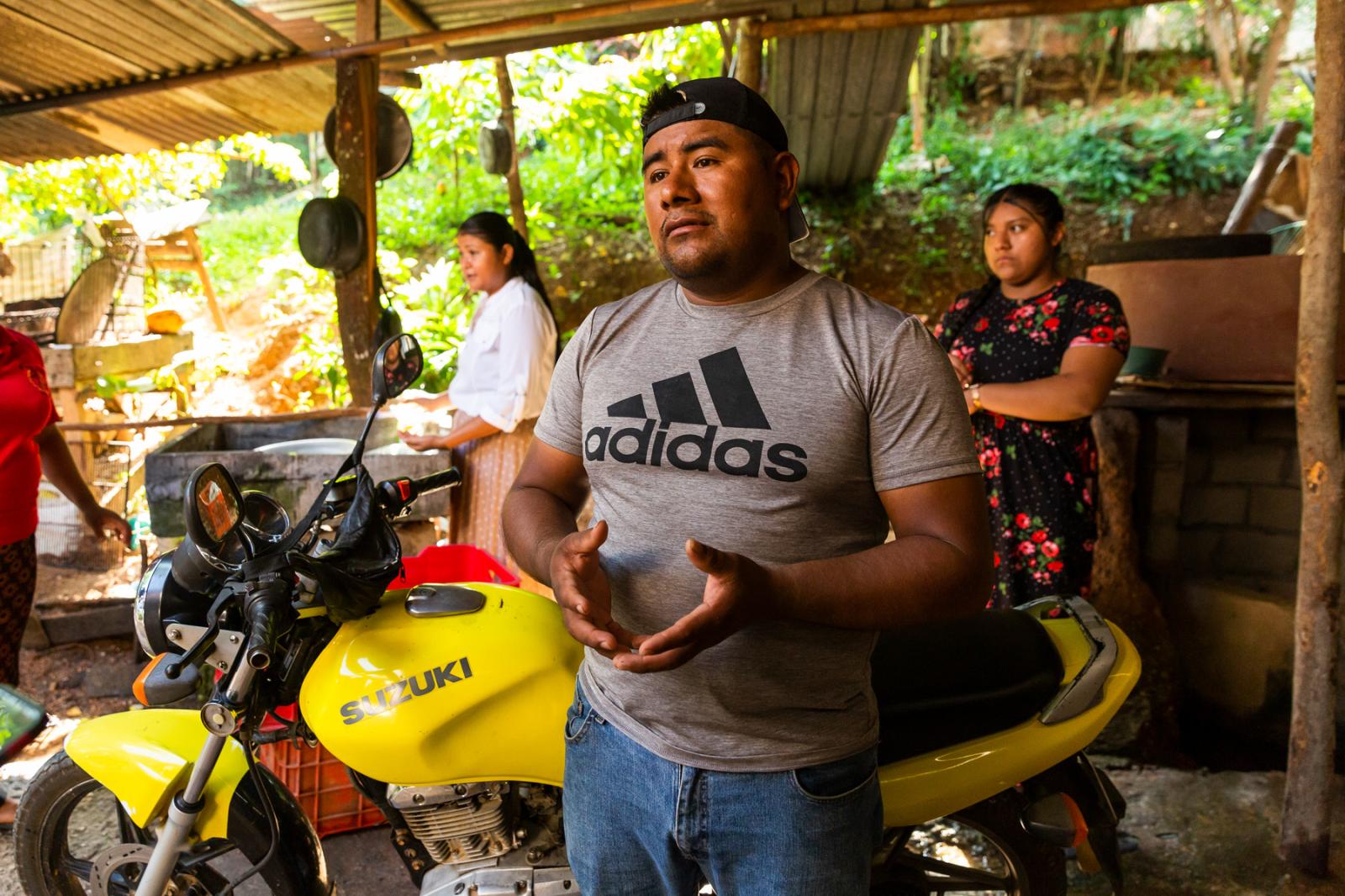 7 of 9 © 2023 Eva Lepiz
July 1, 2022. Tuxtepec, Oaxaca, Mexico. Mario Torres-Morales, 34; María Antonia's brother had plans to go with the same group to the United States, however the person who was going to buy her motorcycle did not arrive, so he did not have cash to make the trip. Behind him, Laura Romero Nicolás, 36, and Kenia, 16, daughter of Maria Antonia, prepare to pray inside the house. 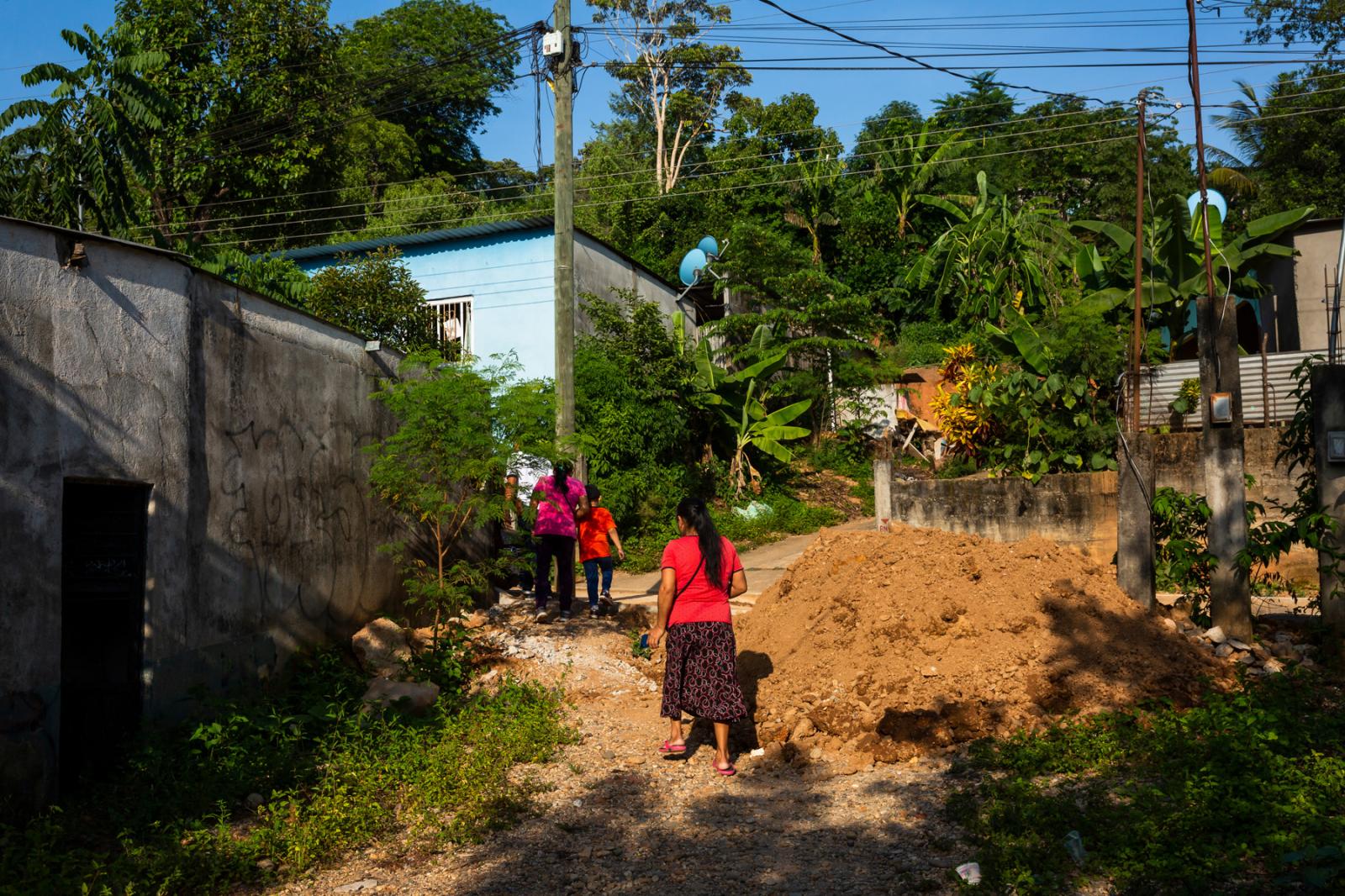 8 of 9 © 2023 Eva Lepiz
July 1, 2022. Tuxtepec, Oaxaca, Mexico. Members of the family and the church congregation go to the house of Luz Estrella Cuevas Remolino to say prayers. 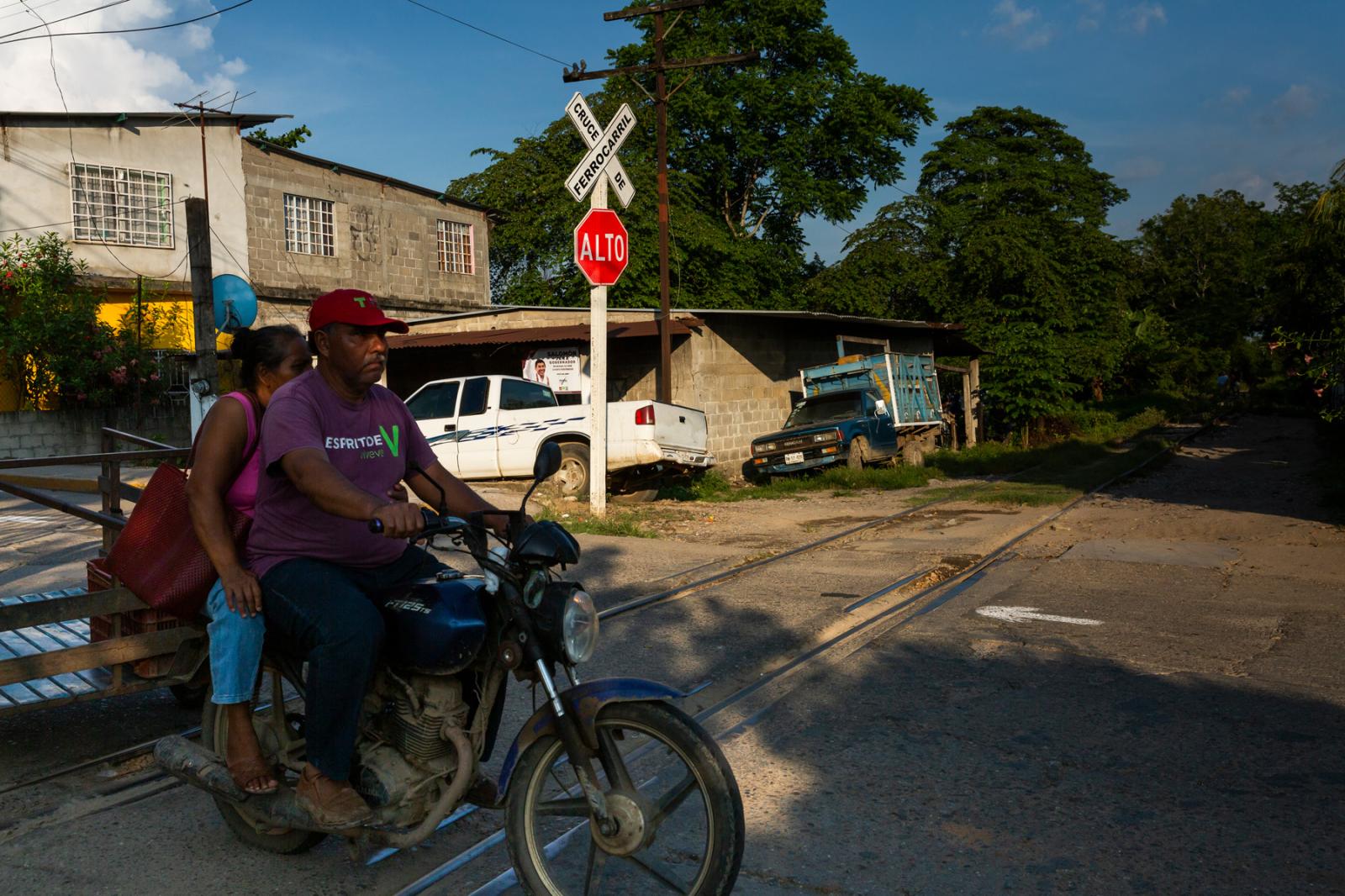 A Oaxacan community prays for two brothers — one dead, one alive — who were in the San Antonio trailer.

One day last month, two brothers in this Oaxacan municipality of 160,000 abruptly told their wives that they would be leaving for the United States within the week.

Mariano and Begai Santiago Hipólito, both in their early 30s, were frustrated with their jobs as construction workers, an occupation where on a good weekthey might each make about $100.

They said they planned to travel to Georgia and return a few years later with enough money to better support their children. Their wives said they urged them to stay, reminding them of the tightknit evangelical community they’d leave behind. But the brothers were adamant.

“He told me, I’m only going for two years, the time will go by quickly,” said Luz Estrella Cuevas Remolino, Mariano’s wife. “I’ll be back to be with you.”

On June 27, nine days after they set off, Cuevas was breastfeeding her son and watching television when she viewed a headline about a tragedy in San Antonio. Dozens of migrants had been found dead in an abandoned, sweltering tractor-trailer.

Mariano, she’d learn, had died. Begai, she was told, was in a hospital in grave condition.

It was one of the deadliest human-trafficking tragedies in U.S. history, with 53 victims who were most, if not all, from Mexico and Central America. Many were people who had lost hope for their futures in their hometowns and decided to risk a dangerous journey in search of better opportunities for themselves and their families.

Two of the victims were 13-year-old cousins from an indigenous community in northern Guatemala. Also dead was a young college-educated couple from Honduras who had struggled to find well-paying jobs.

Fatalities are common on the migrant trail. Many die trying to cross the desert, after having hired smugglers, or while climbing onto moving freight trains.

Advocates say that harsh border policies like Title 42, a rule invoked during the Trump administration that allows authorities to immediately expel migrants even if they say they are seeking asylum, have forced migrants on increasingly perilous routes.

“It’s always been dangerous,” said Theresa Cardinal Brown, managing director of immigration and cross-border policy at the Bipartisan Policy Center in Washington. “One thing that is a clear correlation is we have seen that as it has become harder to get into the United States at the border, desperate migrants will do more desperate things to get here.”

The Santiago brothers grew up in an indigenous community of San Felipe Usila, a poor municipality of about 12,000 people that’s a three-hour drive from Tuxtepec, one of the state’s largest municipalities.

They were two of nine siblings and their father, like many in the area, made his living working in agriculture tending cornfields. Most residents from their community speak Chinantec, an indigenous language, and many from San Felipe Usila leave homes for the U.S. or larger Mexican cities like Oaxaca or Tuxtepec.

The brothers had moved to Tuxtepec, also a rest stop for Central American migrants that ride on the roof of “La Bestia,” a freight train that travels up through Mexico. Tour buses frequently take residents of Tuxtepec to Ciudad Juarez, where they’ll work in assembly plants or attempt to cross the border, according to Carlos Abad, a journalist for the local media outlet El Piñero.

The brothers spent much of their time at an evangelical Christian church, where Mariano sang in the choir. They played guitar and often worked on construction projects together.

Mariano told his wife, Cuevas, of his plans three days before heading out. He had been out of a job for 15 days and “was desperate,” she said.

When Begai informed his wife, Maria Antonia Torres Morales, she insisted that “we were OK, even though we had little.” He said he’d be gone for three to five years.

“I didn’t want him to leave,” said Torres, who also helps make ends meet by selling tamales. “I said it was a long time.”

On June 18, the brothers took a bus from Tuxtepec to the state of Veracruz, according to their families. They then flew to the city of Monterrey before traveling north to the border city of Nuevo Laredo.

From a hotel room, they were in touch with their wives. Mariano told Cuevas that they had tried to cross the border several times but had been caught by authorities and forced to return.

The last day Cuevas heard from Mariano, he told her that they were going to give it one last shot. She later heard that he had made it and was waiting to be picked up in a trailer.

When she saw the news of the tragedy on television, she immediately began to worry.

“The first thing I thought was that they were going to go,” she said.

In Tuxtepec, word of the two brothers spread after Abad, the journalist, wrote about their story.

“There’s a sadness in the community, in all of Usila,” said Saulo Mendoza Hernández, a carpenter from San Felipe Usila who knew the brothers’ father. “Many of us leave and no one expects this for their family.”

It was a shock to Mario Torres Morales, Begai’s brother-in-law, who had intended to accompany the brothers. He stayed behind because the person who was supposed to buy his motorcycle so he could fund the trip never showed up.

Torres, who sells coconuts, said he had been tormented by the idea of leaving his 15- and 6-year-old children but had thought that “between the three, we’ll take care of each other.”

In Mariano’s home on Friday afternoon, Cuevas sat on a bench in a bare living room and cried as she described a surprise birthday party she had recently thrown for her husband. His guitar hangs on a wall in their bedroom.

Her children don’t know that their father is dead. When Cuevas’ daughter sees her crying, she assures her mom that her father will be back soon.

“She’s going to be by herself,” said Maria Soledad Miron Morales, Cuevas’ niece, who has tried to gently remind Cuevas that she needs to prepare for funeral costs. “As a mother, in Mexico, that situation is very difficult.… We don’t know what will happen.”

Both wives have turned to their faith for help. Church congregants have been joining them for prayer at their homes.

In Begai’s home Friday evening, a fatigued Maria Antonia Torres Morales quietly welcomed congregants and relatives making their way through her backyard — past a crate with live pigs — and into her living room.

About a dozen people stood in a circle, bowing their heads while a minister read psalms. The minister said that when Begai left, it felt as though his own arms had been cut off.

“It hurts us to pass through circumstances like this,” he said. “But if he [Jesus] overcame, we’ll also overcome this.”

As the room echoed with “amens,” Torres’ daughter hugged her mother from behind and stroked her hair.

Are grasshoppers as delicious as ham? Mexico’s insect hunters would like you to find out. Los Angeles Times

The Washington Post: Tourists are welcome in Oaxaca, Mexico. Their increasingly bad behavior is not.

To welcome the dead, they journey home to Mexico for Día de Muertos. Los Angeles Times.

The Ones Who Stayed Behind. Americas Quarterly.