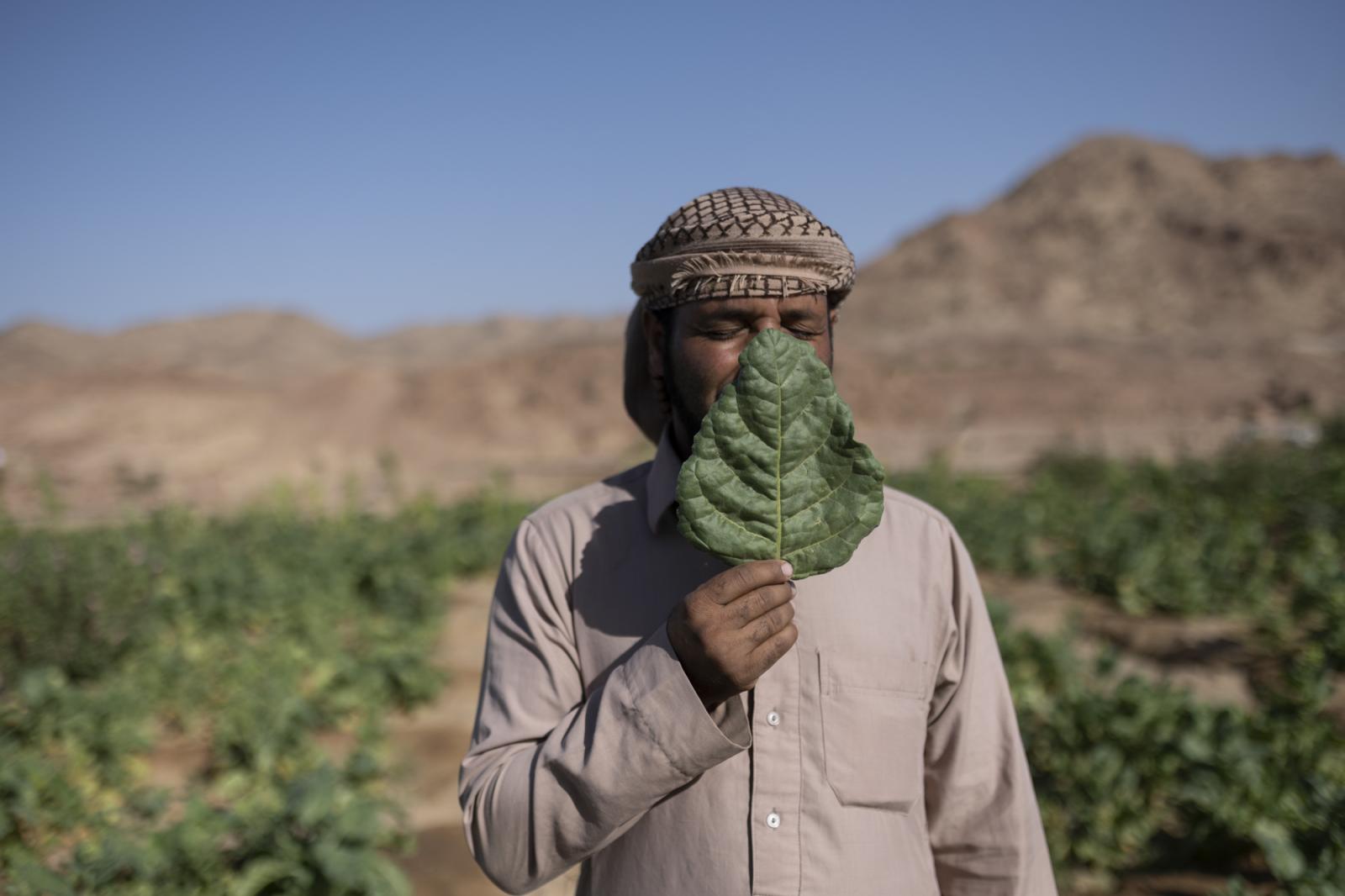 1 of 19 © 2023 Rehab Eldalil
Seliman (35) checks on his family garden every day, trekking from his village to ElSheikh Awad. Seliman manages an ecolodge with his cousins in Gharba valley, usually he'd be busy serving food for guests but as the pandemic spread throughout Egypt, less and less guests come to stay at the ecologde and now the family redirects their focus on the family gardens spread across Gharba valley and Sheikh Awad village. "We don't have Corona here, but we are affected by it. Look, these plants are our face masks." says Seliman. October 2020. 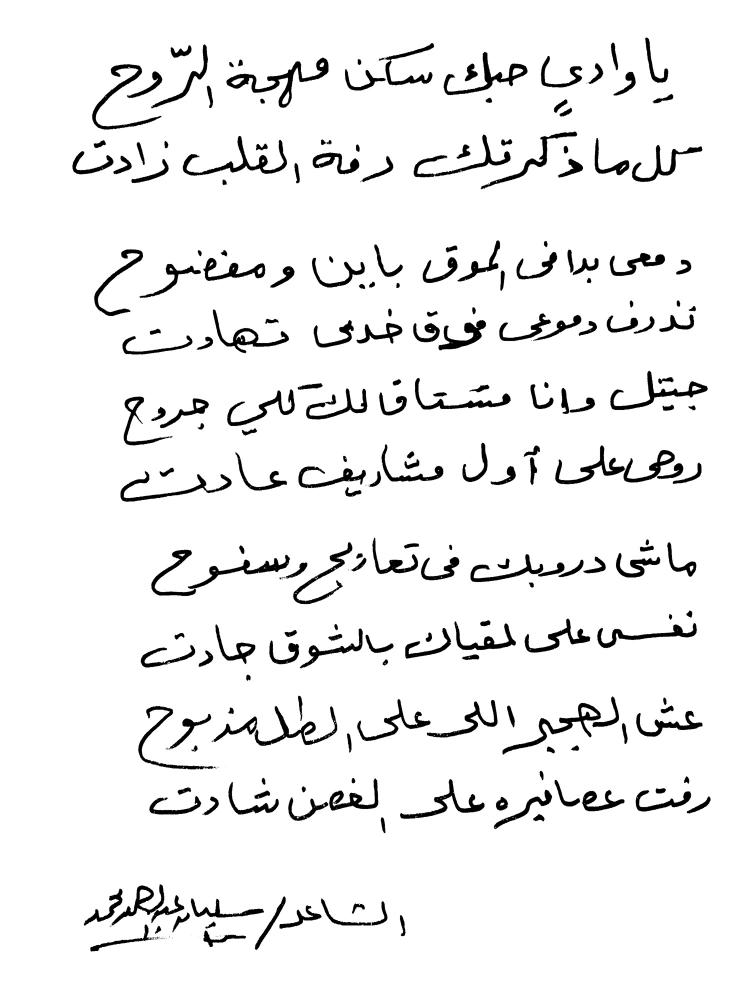 2 of 19 © 2023 Rehab Eldalil
Oh valley, your love is a home for the soul’s joy
Whenever I see you my heart grows
I come to you in longing full of pains
My soul returns to me as I approach your grounds
By Seliman Abdel Rahman 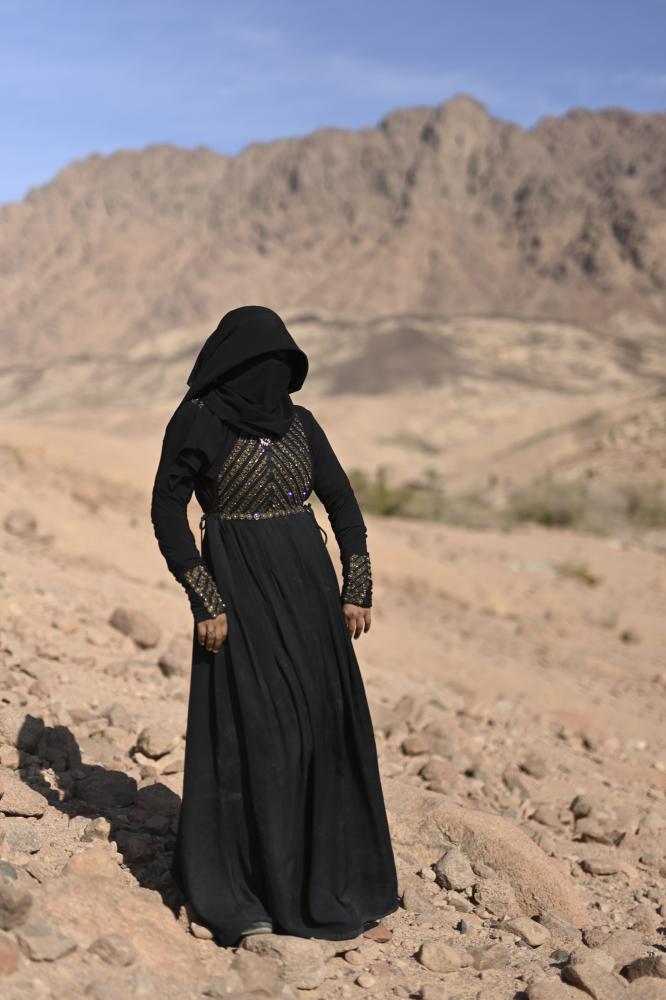 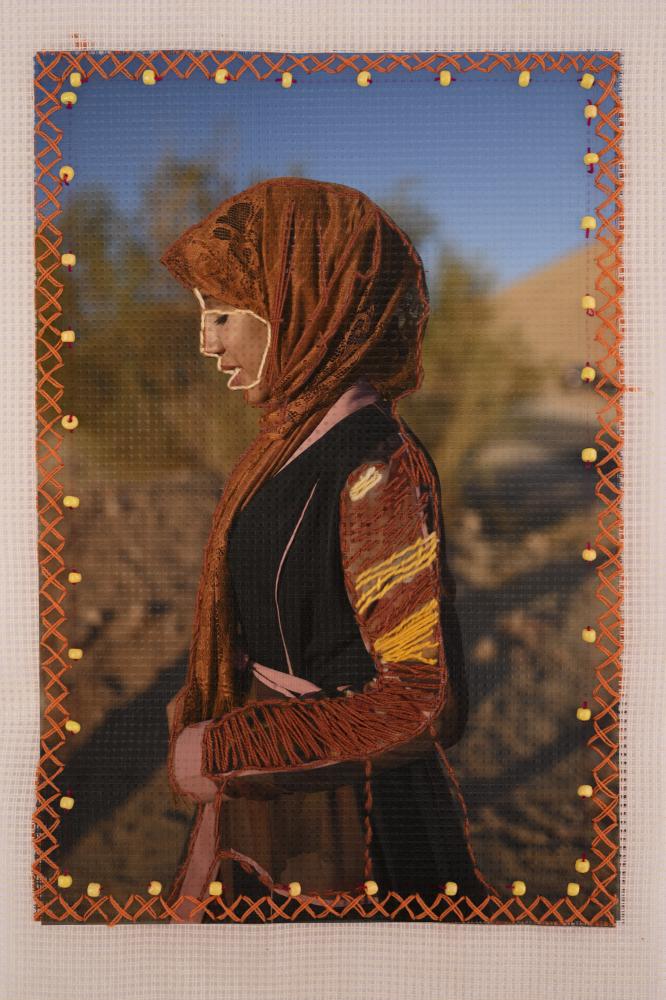 4 of 19 © 2023 Rehab Eldalil
Up until the 1990’s women were prohibited from being seen by men from other tribes without consent. As the technology evolved, the awareness of the circulation of an image on social media and lack of control of who gets access to an image escalated this concern, leading some women from never being photographed in fear of uncontrolling its access, circulation and how they’re represented. Collaboratively working with the female Bedouins, every woman photographed adds embroidery on to her portrait printed on fabric. She has full control over what to reveal or conceal using the traditional medium of embroidery. Taking full control over her representation in the project. Embroidered photograph of Nadia (20) by her and her cousin Mariam (19) from AlTarfa village. 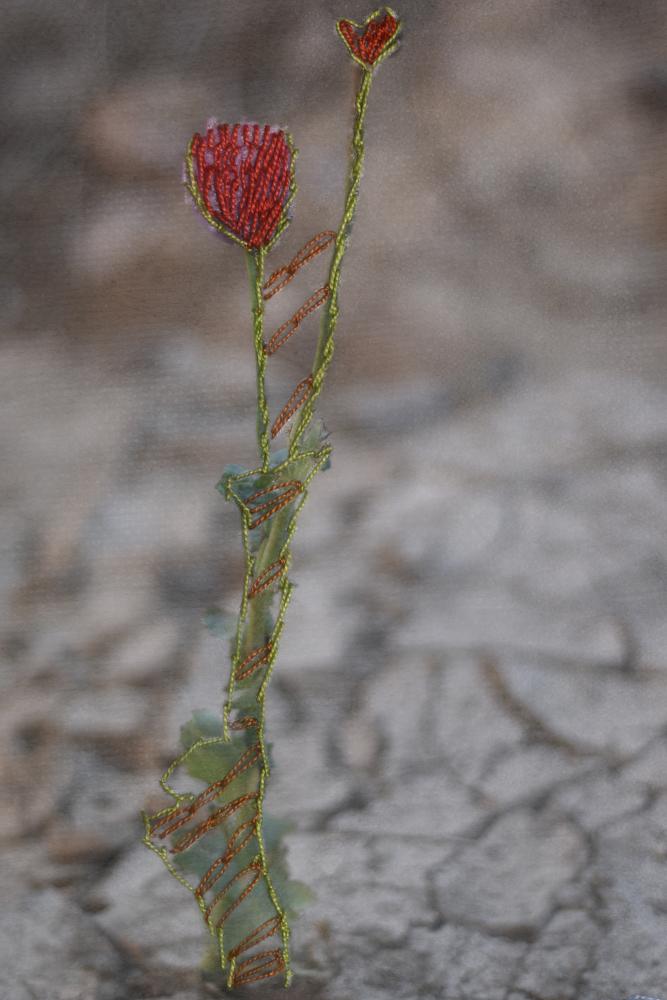 5 of 19 © 2023 Rehab Eldalil
Emberoidered photograph of a flower sprouting from dry land. Embroidery by Om Anas from AlTarfa village. 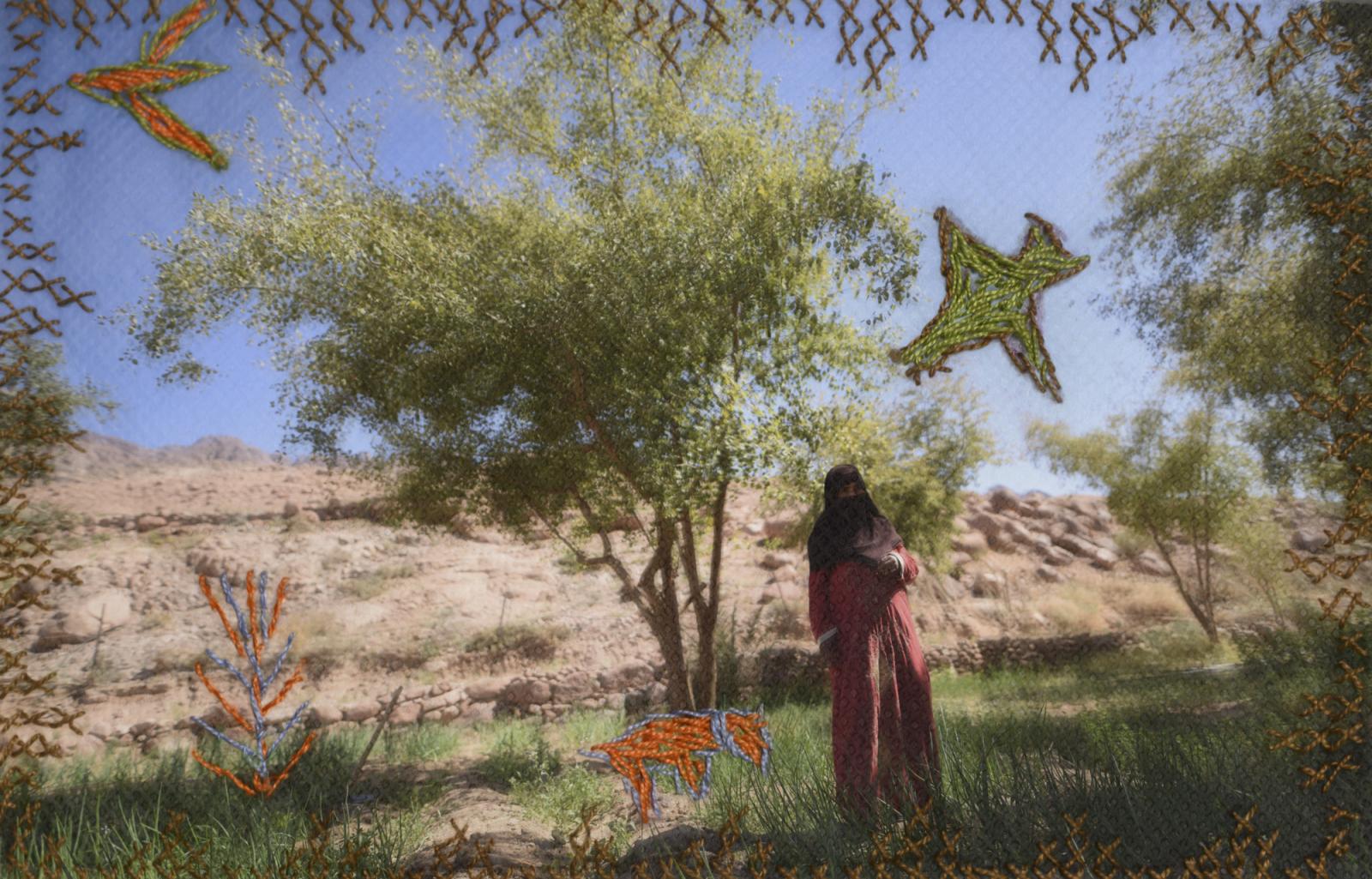 6 of 19 © 2023 Rehab Eldalil
Embroidered photograph of Hajja Oum Mohamed (53) in her garden in Gharba Valley. Embroidery by her. 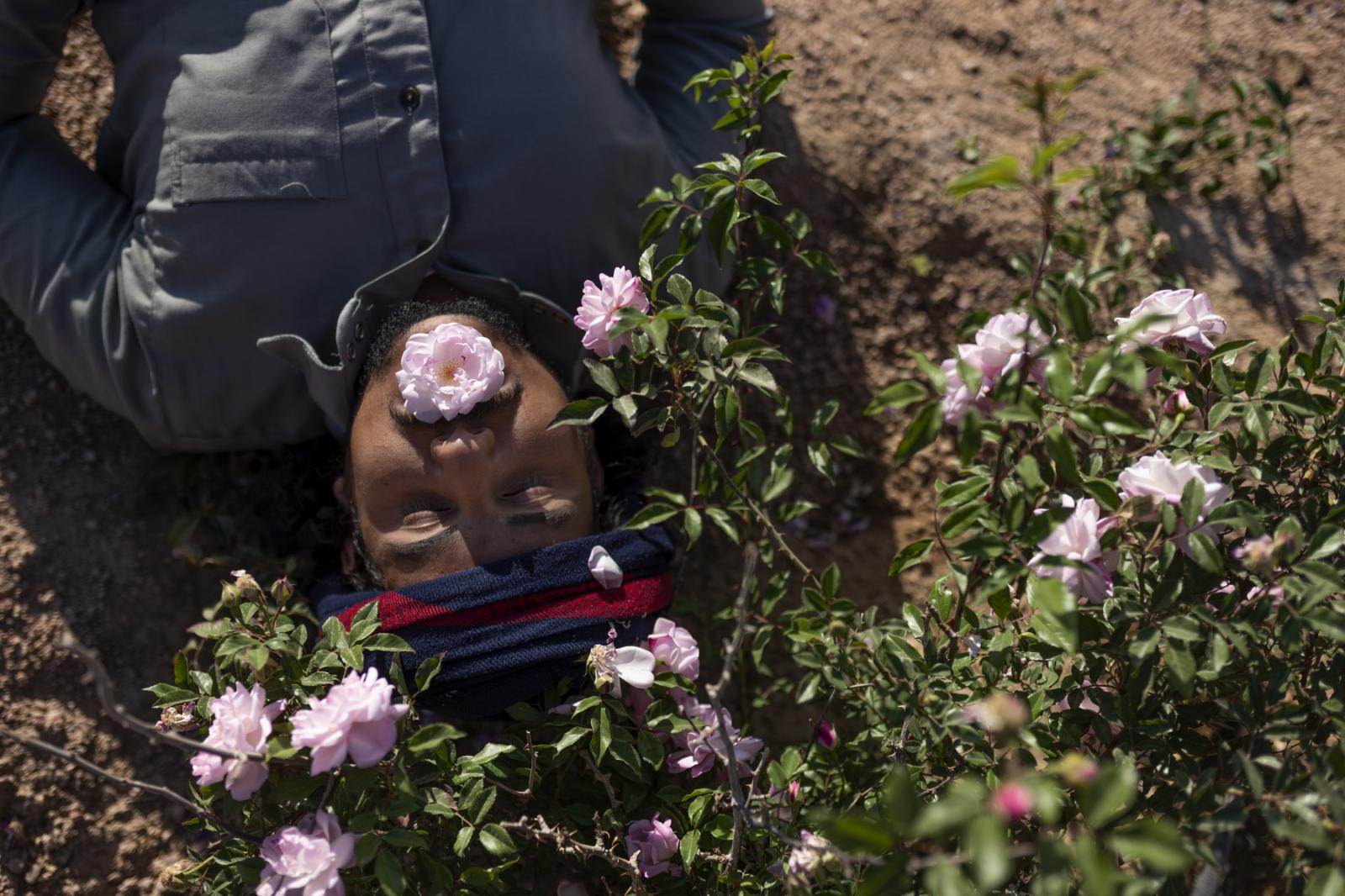 7 of 19 © 2023 Rehab Eldalil
Moussa Algebaly (25) from the Jebeleya tribe lies under the "flower" plant after daily maintenance in his garden in Al Tarfa, South Sinai, Egypt. After years of drought, a major flood occurred in mid-March 2020, providing an agricultural opportunity for the Bedouin community amid the economic impacts caused by the pandemic. For the community whose main source of income is tourism, the flood is a miracle. The land has given back to its keepers in the time of crisis. April 2020. 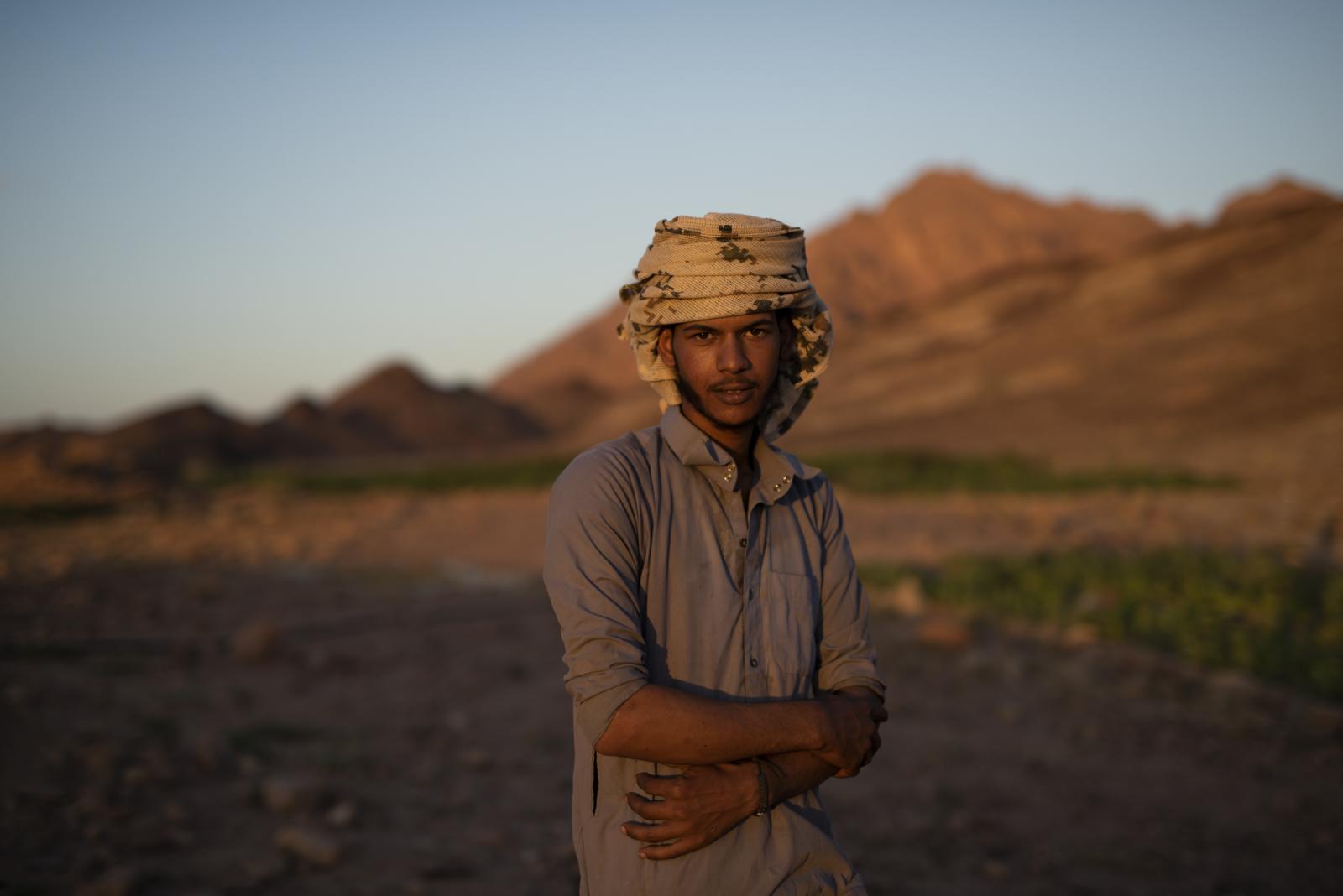 8 of 19 © 2023 Rehab Eldalil
Youssef (20), collects Khodary plant leaves in order to be then grind the next day and dried up before selling to merchants and customers. Youssef has taken over an old Bedouin tradition to grow and care for his family garden. A tradition that has disappeared for years before the return of the flood to the land in March 2020. Gharba Valley, S.t Catherine, South Sinai, Egypt, October 2020. 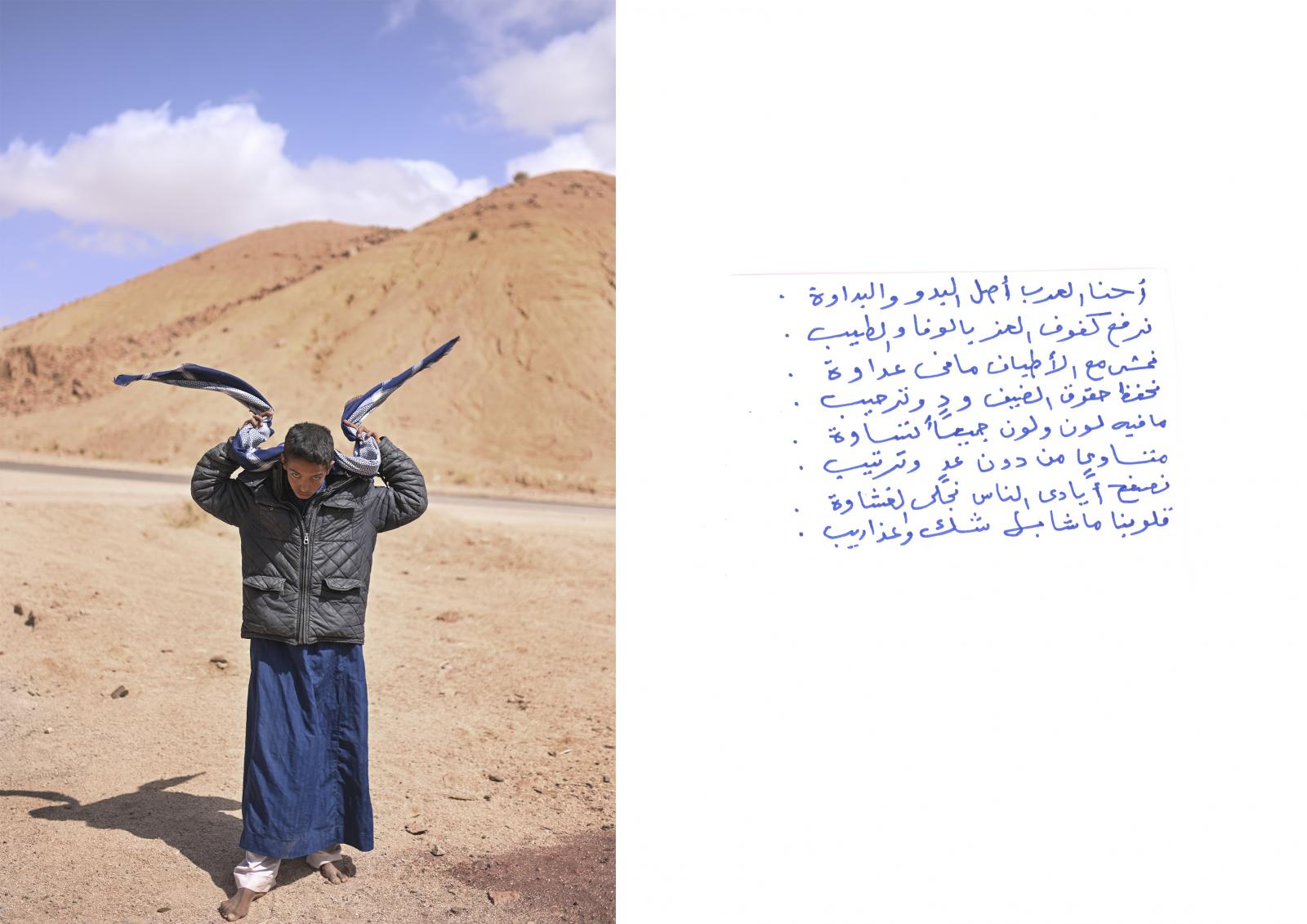 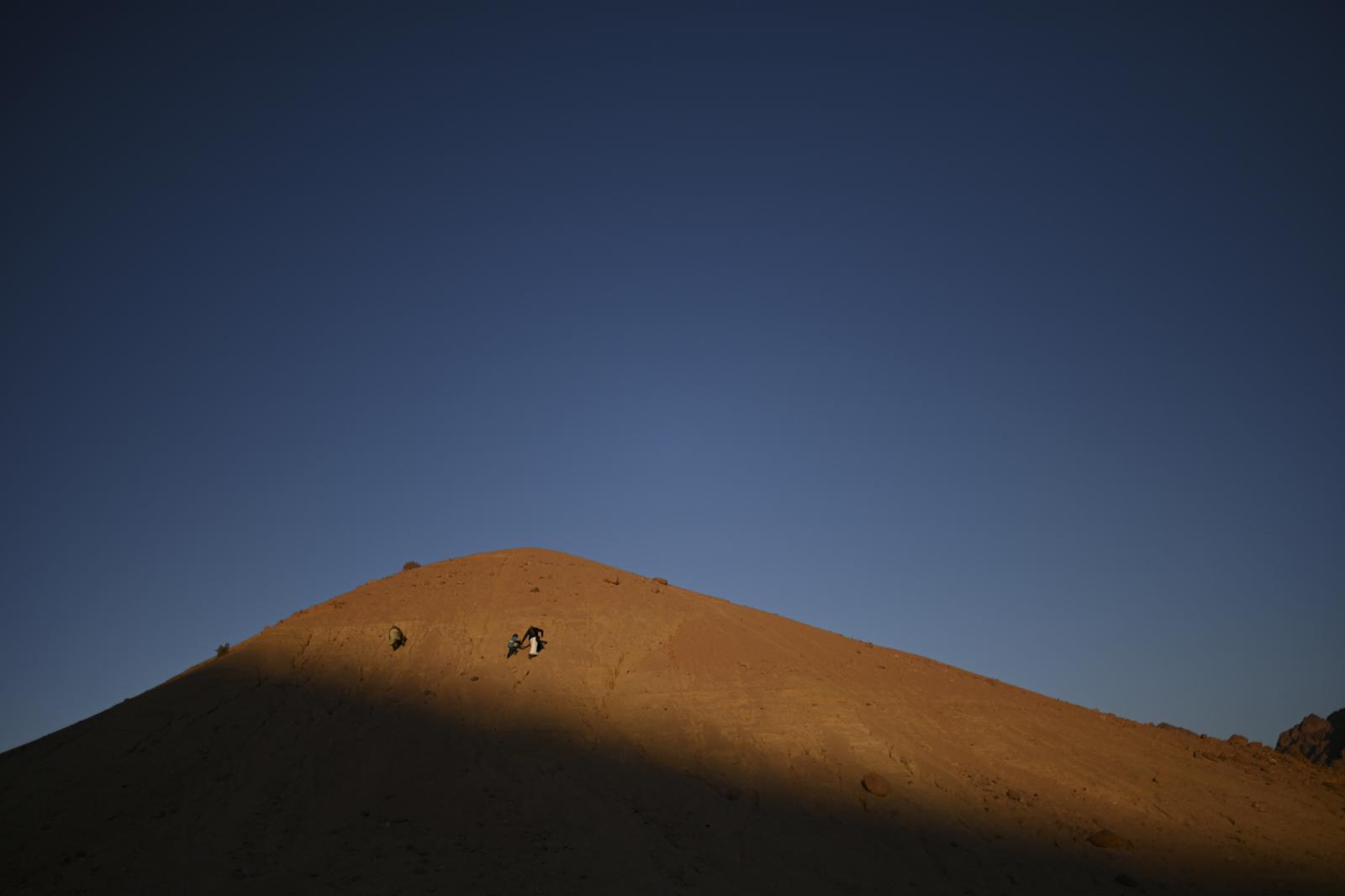 10 of 19 © 2023 Rehab Eldalil
Father and son walk over the hill to watch the last moments of sunset. The role of the father within the family dynamic in the Bedouin community does not only comprise of providing food for the family. Fathers care for their children when the mothers are off walking the village herd. As the mother walks for hours into the mountains, fathers are staying at home or working from home to care for the children. Gharba Valley, St. Catherine, South Sinai, Egypt. December 2018.
During the Israeli occupation between 1967 and 1982, Bedouins remained on their lands to protect them. Even though they helped the Egyptian forces regain possession of Sinai during the war, their resistance to the occupation was overlooked. The larger Egyptian public came to view them as traitors. So began a long struggle to secure civil rights and basic needs. Like many indigenous communities around the world, they are commonly misrepresented in the media, portrayed as isolated from, and a threat to, modern society. Throughout it all, they remain the keepers of the land - protecting it from harm as it has provided them with blessings in return.
Since the war, most of the surviving archives about Sinai have been stored in the St. Catherine’s monastery. The Egyptian government prohibits public access to these archives, and thus withholds the history of the land, the history of its people and possibly the history of my family.
“Yes, I was told before that your grandfather’s family is Bedouin.” My 72 year-old father told me in a rare moment of contemplation. Having a peculiar last name El Dalil, meaning The Guide, our family was rumored to have come from Bedouin and Palestinian roots, without further evidence. I come from a family with generational trauma: a grandfather imprisoned for years for advocating for Palestinian rights; a father, the oldest of six, forced as a young boy to take over his father’s role in the family, and by the age of 20 went to war. For years I worked to decipher our family history, with no guides at all.
When I ran away to the mountains as a teenager, I didn’t know about my estranged ancestry. I only know I was longing for something I was a stranger to. This is my process of finding and seeking the meaning of belonging.

“A whole new level of interaction. Eldalil assists in building a legacy for the Bedouin people – her multidimensional approach touches both viewers and subjects in unforgettable ways.”
Reviews

"The Bedouins have long been reduced and flattened even within local communities. An orientalist trope, a Lawrence of Arabia imagery or actually racist tropes inside various Arab countries that have sizeable Bedouin communities. Rehab’s approach understanding first the history, working with the community to develop their own stolen archive is brilliant.
It’s notoriously difficult to access the Bedouin community, part of the reason that in the orientalist tropes: they are often simplified and flattened. Not only has she gained the access and respect of the community, but she is actively collaborating; worked to make a health clinic, and giving back to the community. I think the ethical standard that Rehab is working on is a lesson to all of us. I can only think of Nina Berman’s Autobiography of Miss Wish in terms of understanding and meeting our ethical obligations. This isn’t our story, its what is shared and Rehab works with the community as they narrate their own reality as active partners.
It’s ethnographic, folkloric, art, conceptual, and academic take on notion of archive, and subverting the stolen archive in this case. It’s multidisciplinary, brilliant and unique. Rehab is a rare photographer, an author, wearing many hats. She is one to watch because this is the direction that I think the world is demanding that we go. People are increasingly demanding a say in their representation and she is ahead of the curve and we can learn from her approach."

Ariella Azoulay Link
Author, art curator, filmmaker, and theorist of photography and visual culture. Professor of Modern Culture and Media and the Department of Comparative Literature at Brown University.

"The Field guide with the plant is fantastic, as well as the collaboration with women through embroidery. Imperialism, and local projects of colonialism, like the state of israel, did everything possible for children not to know the worlds of their grandparents, including not knowing their languages, modes of growing food, knowledge of the environment etc, it is painful but not irreversible. In this sense your projects are very important, and I hope you will keep going with it." 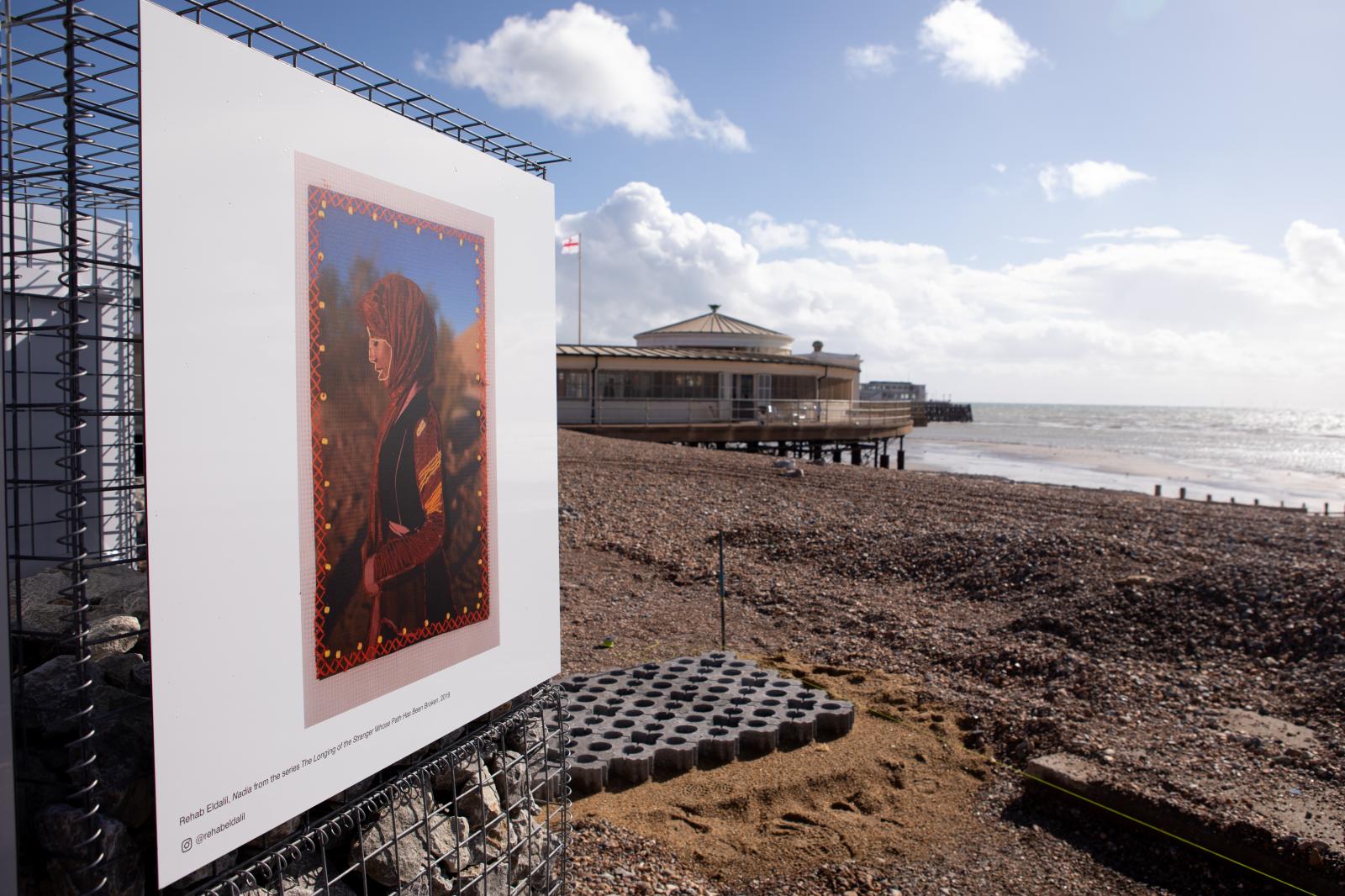 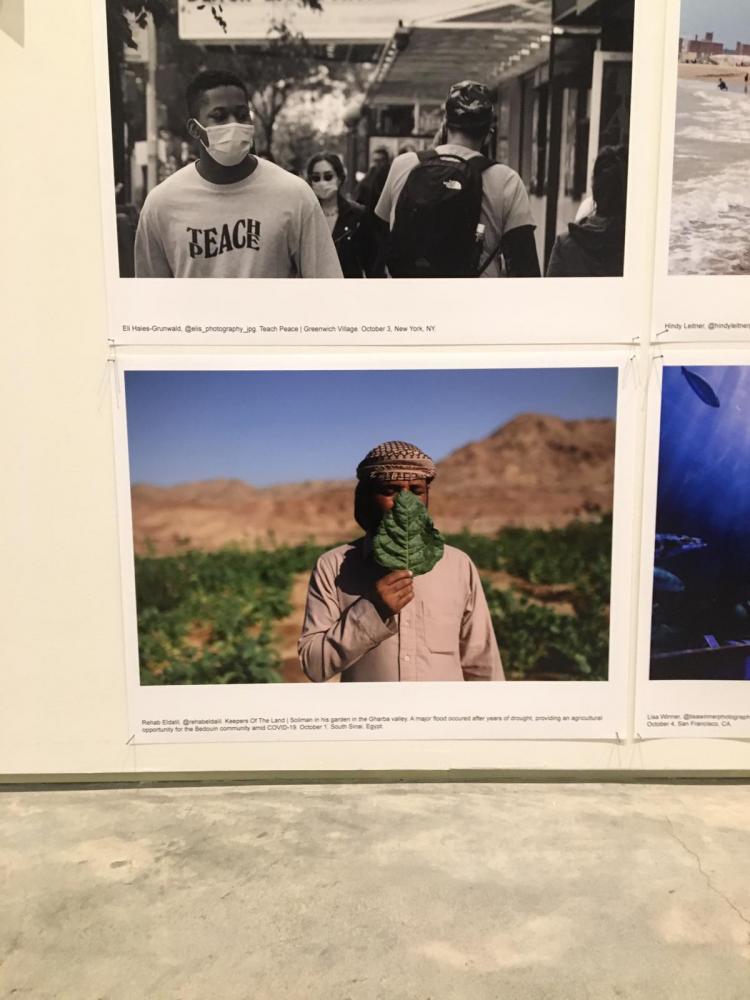 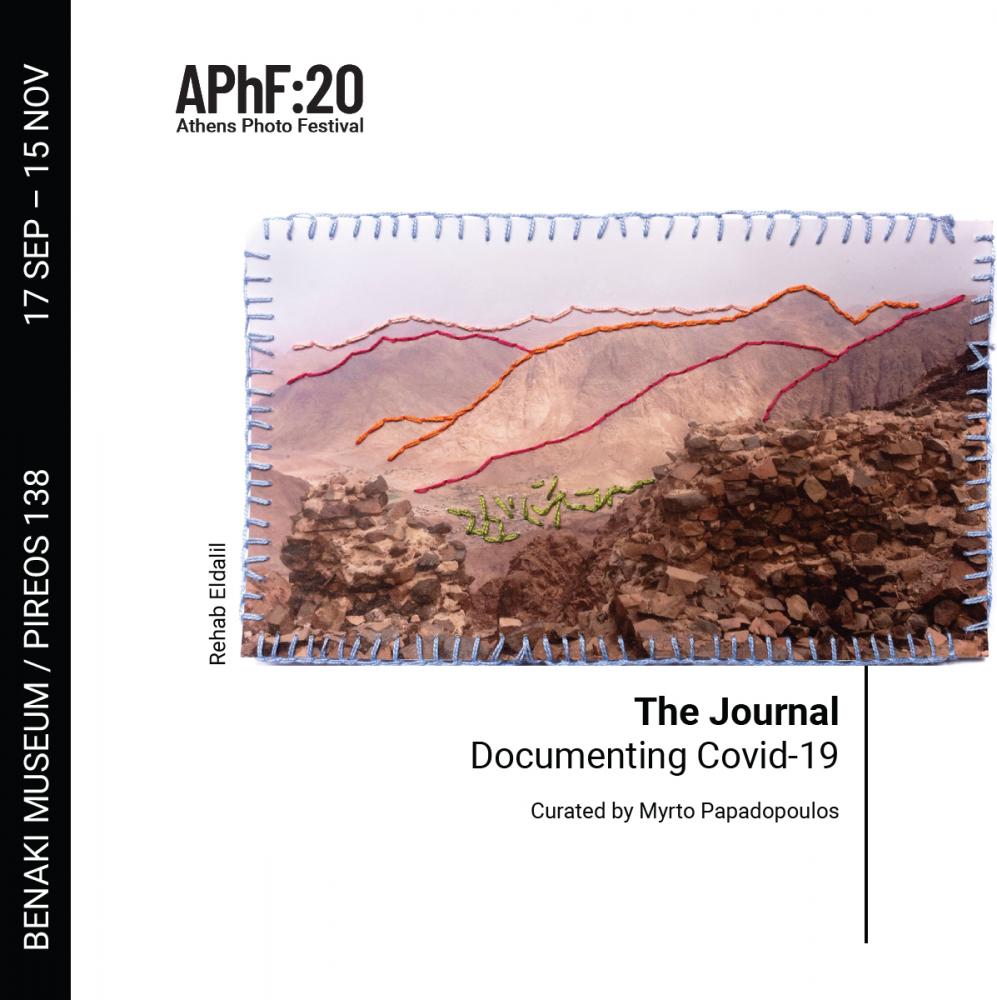 (2018-ongoing) A personal project in which I reconnect to my roots and explore the process of finding and seeking the meaning of belonging cited through the Bedouin community of St. Catherine in South Sinai, Egypt.

The community is part of the creative process. I'm using their commentary of embroidery, poetry, sound and storytelling to link the photographic work with topics of social injustice and the history of the community’s struggles. The final outcome is a complementary collection of photographs, written content, embroidery and multimedia.

The story attempts to understand the layers of an identity and the interconnectedness between people and land which defines the notion of belonging. In doing so, I’m raising questions on the meaning of identity and belonging. I  believe it’s a common human emotion to seek a definition of one’s identity, yet its complexity is often ignored, creating linear narratives and othering. With this dialogue I hope to build a bridge between the voices of the Bedouin community and western audiences who have long seen the Bedouins and many other indigenous communities through a romanticized gaze.

I’m working with the Jebeleya tribe, who’ve been inhabiting Sinai for more than 1400 years. They’ve survived wars, colonialism, drought and pandemics. Yet, they are in perpetual struggle with the authorities. During the Israeli occupation (1967-1982), Bedouins remained on their lands to protect it. Although they helped Egyptian forces regain possession of Sinai during the war, their resistance to the occupation was overlooked. The larger Egyptian public came to view them as traitors. So began a long struggle to secure civil rights and basic needs. Like many indigenous communities around the world, Bedouins of Sinai are commonly misrepresented in the media, portrayed as isolated from, and a threat to, modern society. Throughout it all, they remain the keepers of the land - protecting it from harm as it has provided them with blessings in return.

This project has been my opportunity to process my estranged ancestry and the Sinai land that the community has sacrificed so much for. It’s this interconnectedness which survived in my blood and drew me back to this land to find my roots and way home.
==============================
The project has additionally branched further from the main body of work, producing a field guide specifically for the younger generations in the Bedouin community. Developed through a collaboration with tribe elders and older members in the community, this field guide is a compilation of plants and herbs natively grown in South Sinai with many medicinal and hygiene benefits. The field guide includes photographs of the plants, descriptions of its traditional use handwritten by collaborators and information on when and where the plants can be found and harvested including illustrations. This field guidebook is aimed towards engaging younger members to celebrate and preserve the traditional and modern Bedou’ identity. It is a bridge between generations to reconnect to their land.

For full portfolio and list of assets please reach out info@rehabeldalil.com

Women Of The South

Traces Of What Remains