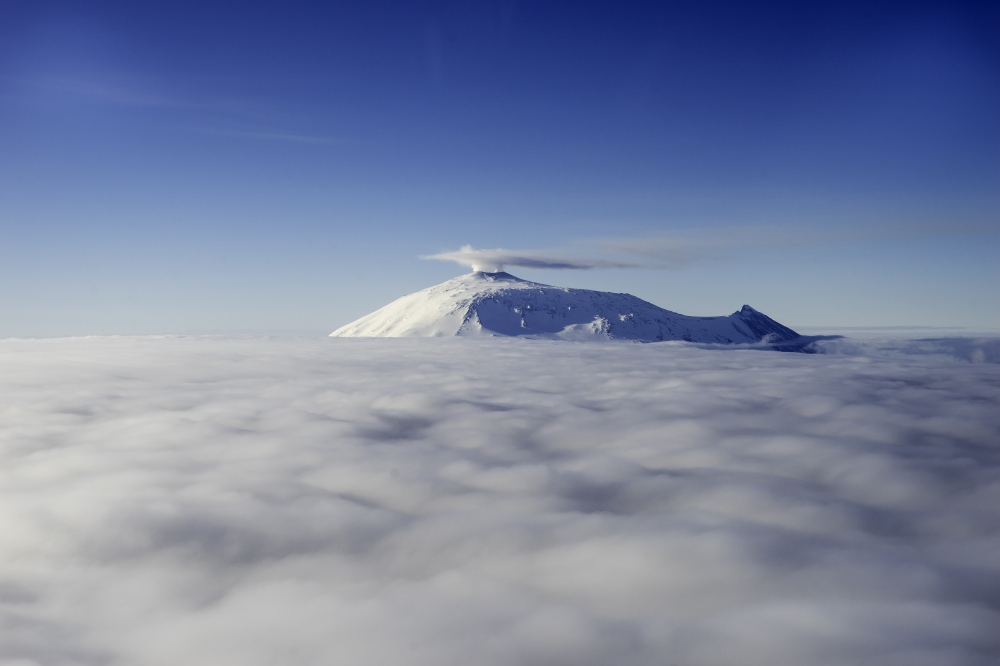 1 of 16 © 2021 Daniel Uhlmann
10 December 2016. Mt Erebus emerging from the clouds. Viewed from Bell 212 helicopter at 10,000 feet elevation. Erebus is one of only a handful of active volcanos in the world which has an open lava lake. For this reason, and its relative ease of access, due to American and New Zealand science bases nearby, it is one of the most studied volcanos of its kind.

The steam coming from its main crater is released 24/7/365. But only on days when the relative humidity and winds are correct, does it appear visible in such a way. 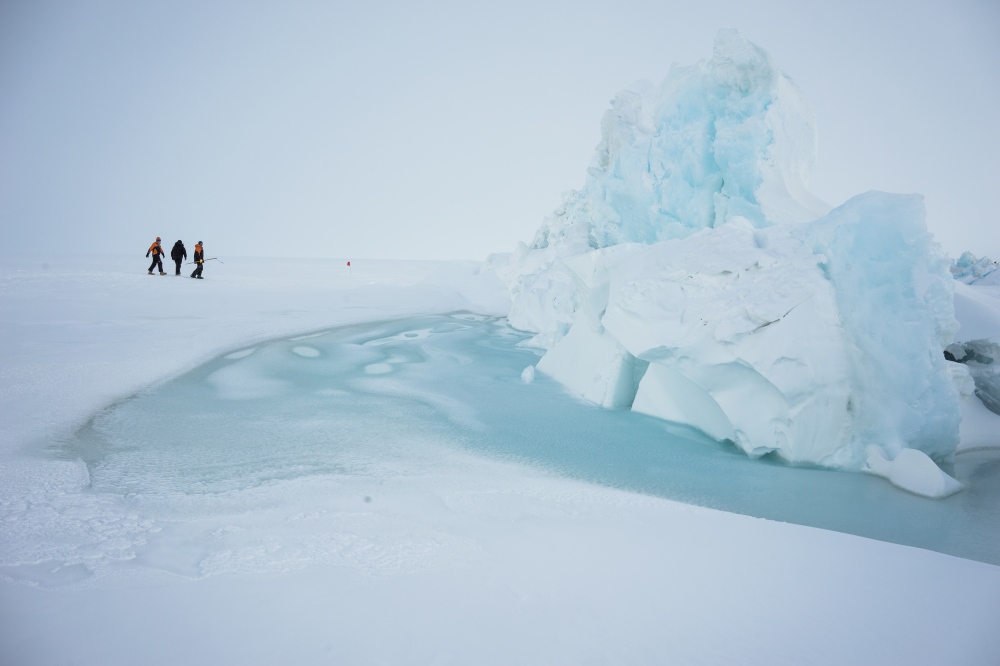 2 of 16 © 2021 Daniel Uhlmann
21 November 2015. Scientists and base staff walk through pressure ridges in sea ice just outside of scott base. 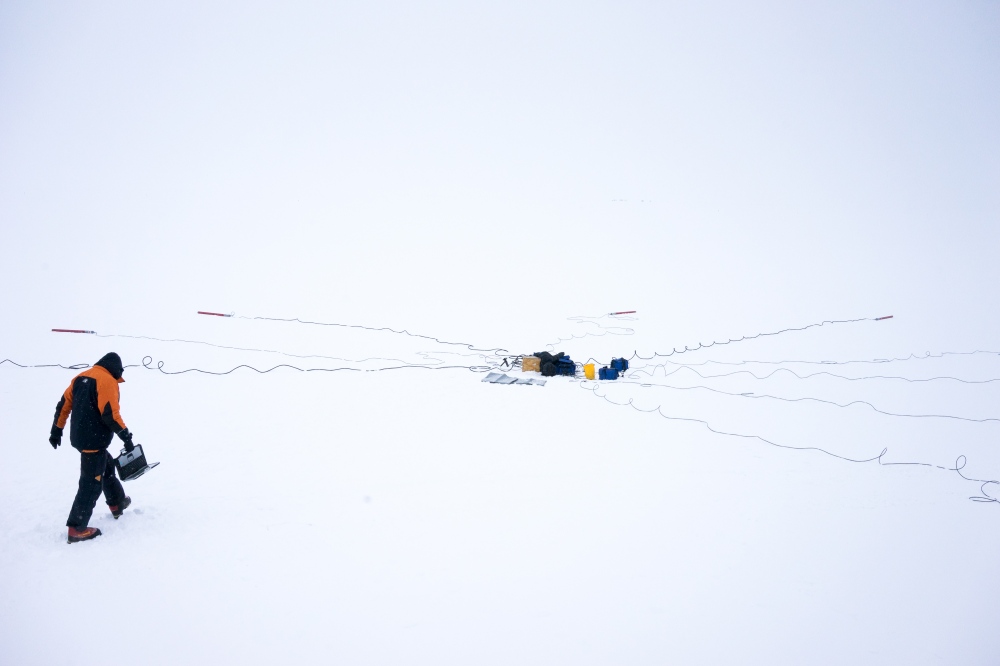 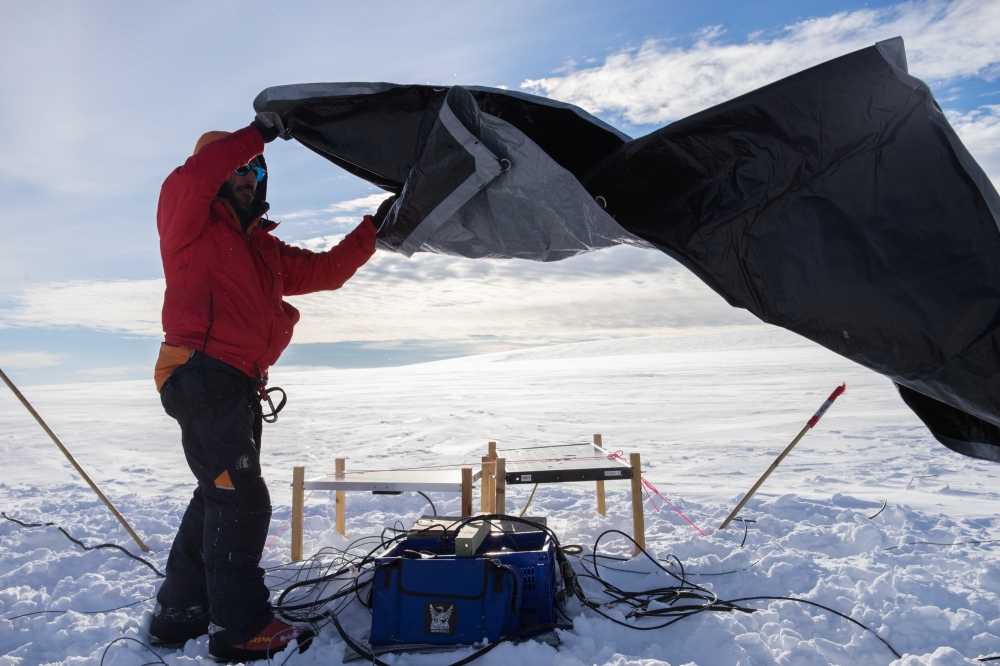 4 of 16 © 2021 Daniel Uhlmann
Dr. Paul Bedrosian covers the geophysics equipment before leaving it to sit on the glacier and collect data over a one-week period. 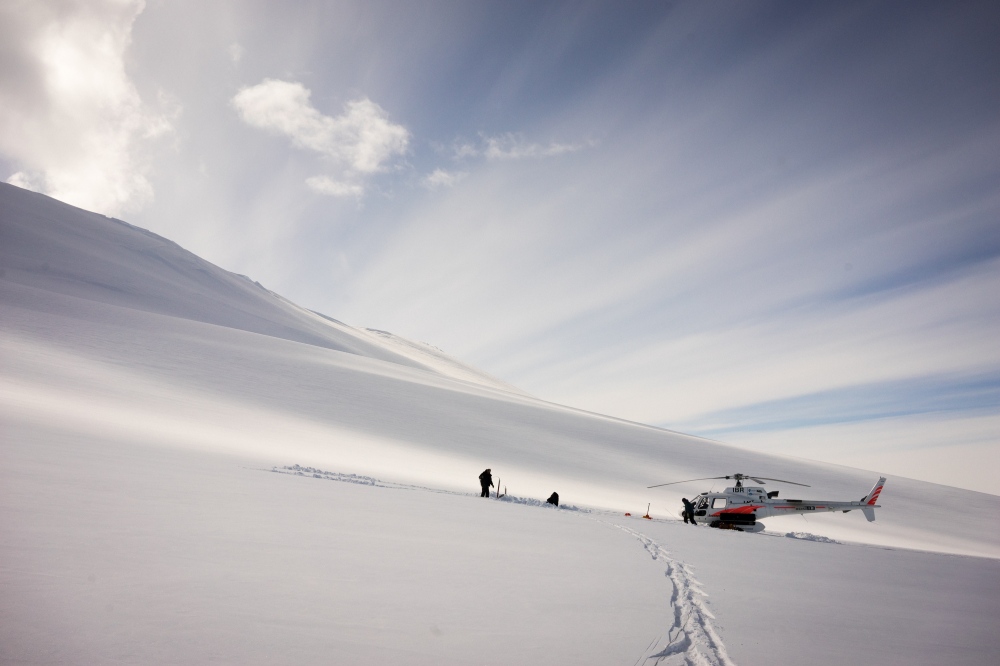 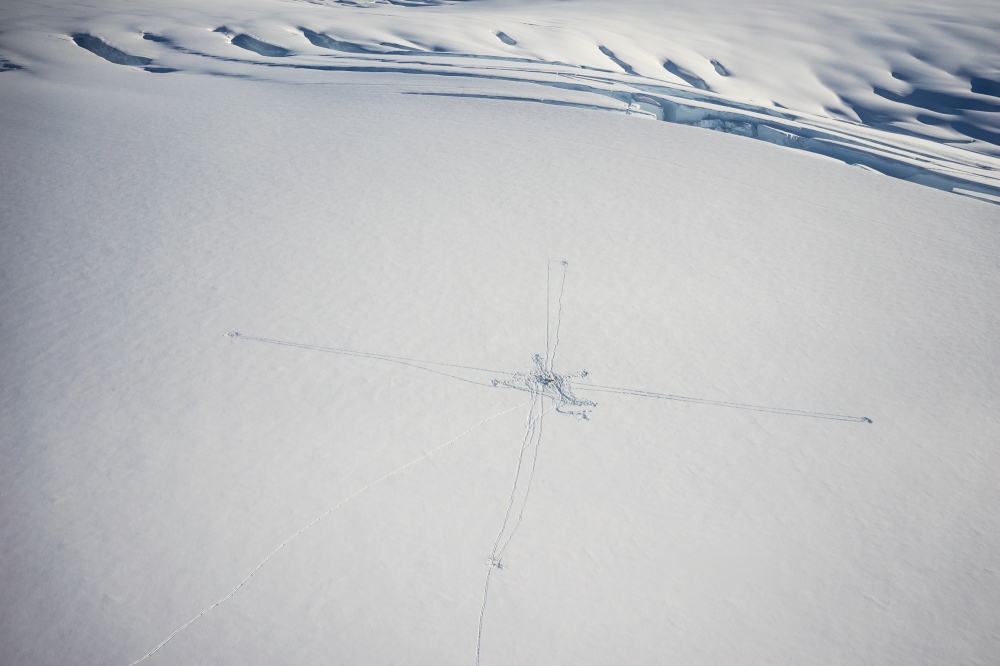 6 of 16 © 2021 Daniel Uhlmann
1 December 2016. Aerial view of a just-installed magnetotellurics measurement station. Like a cat scan of the human body, it uses tomographic techniques by measuring the magnetic and electric fields generated as solar storms originating from the sun pass through the sensors, down into the earths crust and mantle, and back up again. This method can image the earths structure down hundreds of kilometers. In this case Hill and Wannamaker aim for resolution down to 50 kilometers. 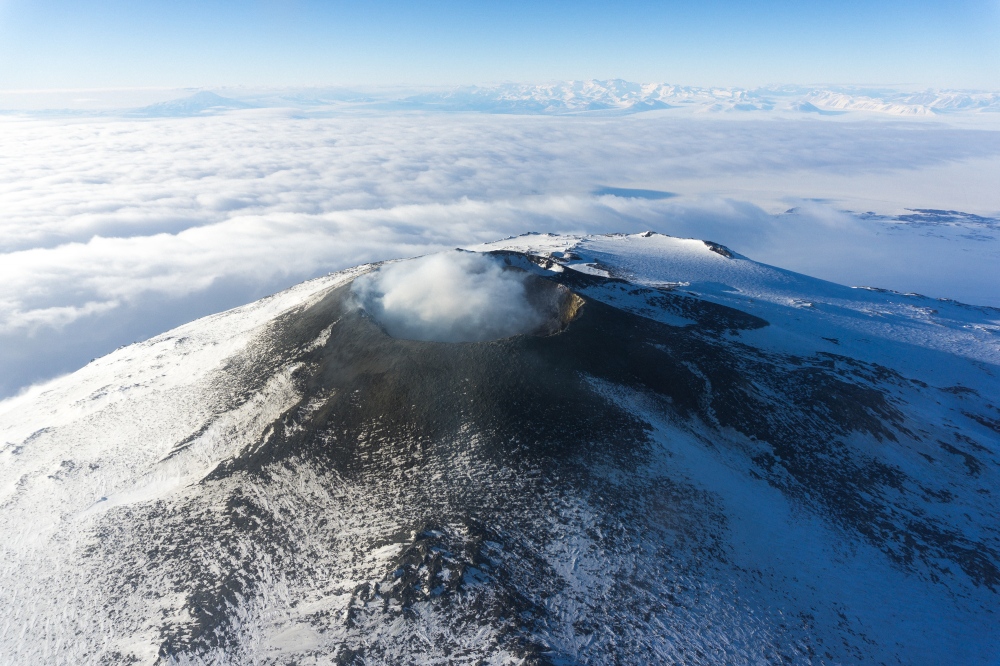 7 of 16 © 2021 Daniel Uhlmann
Mt. Erebus (3.700 meters) crater viewed from helicopter. As the southernmost active volcano, Erebus continually emits steam from its molten lava lake a few hundred meters beneath the crater rim. In the background are the transantarctic mountains which span thousands of kilometers and are one of the longest mountain chains in the world. 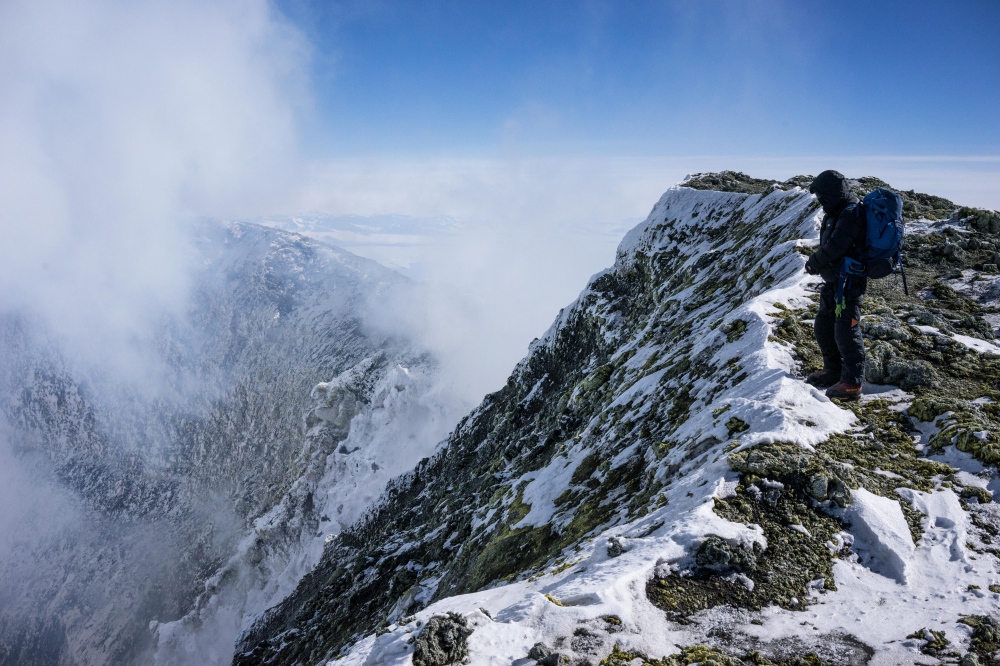 8 of 16 © 2021 Daniel Uhlmann
3 December 2015. Geophysicist and mathematician Dr. Michal Kordy captures his first glimpse of the interior of Mt. Erebus' crater. This knowledge was crucial for his modeling. 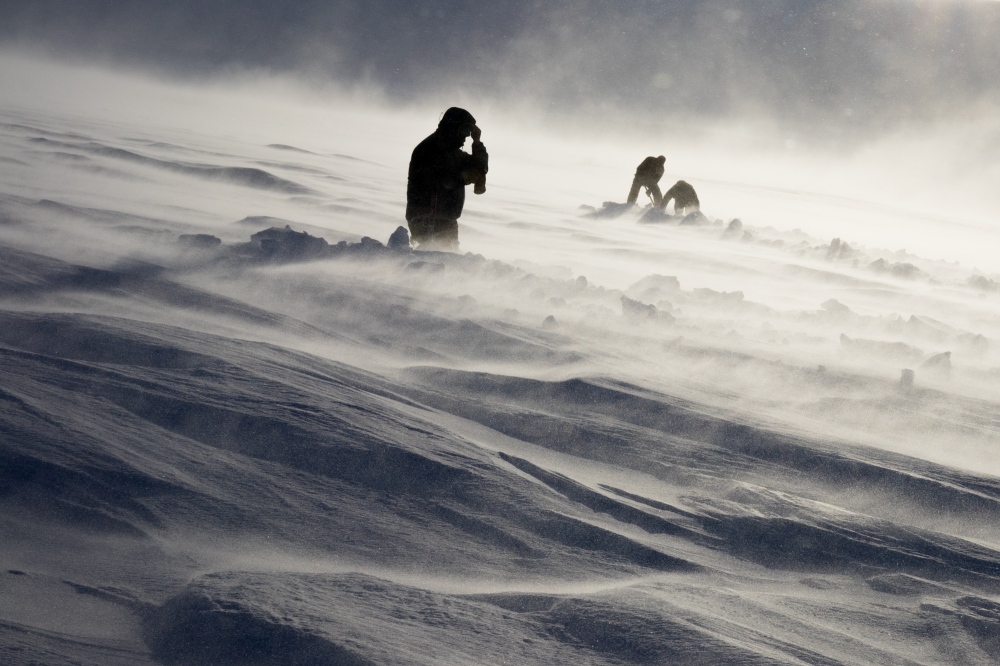 9 of 16 © 2021 Daniel Uhlmann
12 January 2016. Dr. Graham Hill, Dr. John Stodt, and helicopter pilot Harlan Blake dig out a buried measurement site on a glacier on Mt. Terror during a windstorm. 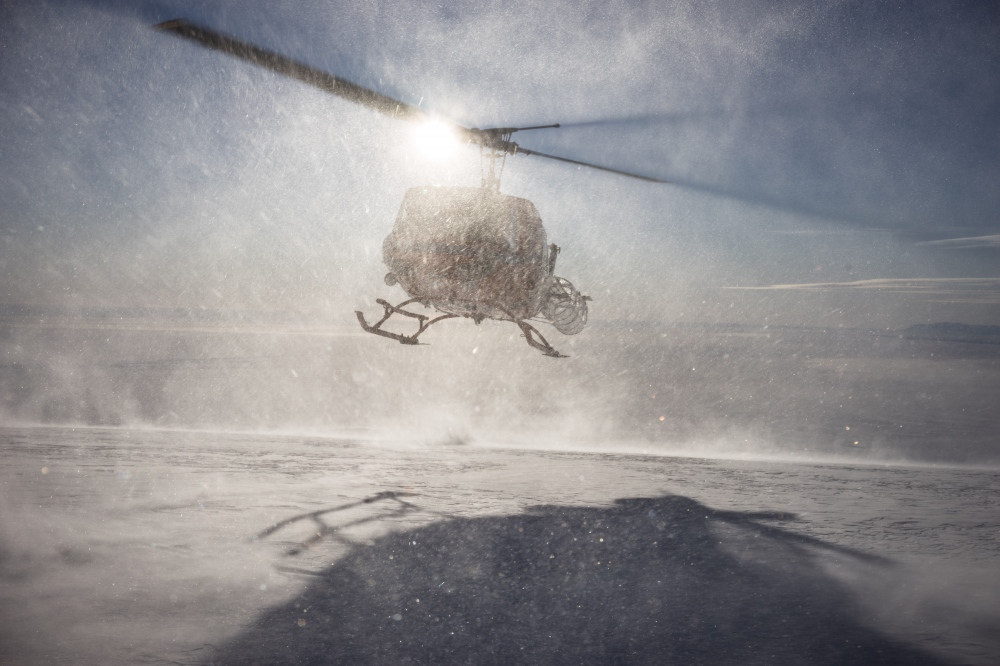 10 of 16 © 2021 Daniel Uhlmann
27 November 2015. A National Science Foundation Bell 212 helicopter lands to pick up the science group on the glaciated flank of Mt. Erebus' south side after a site installation. 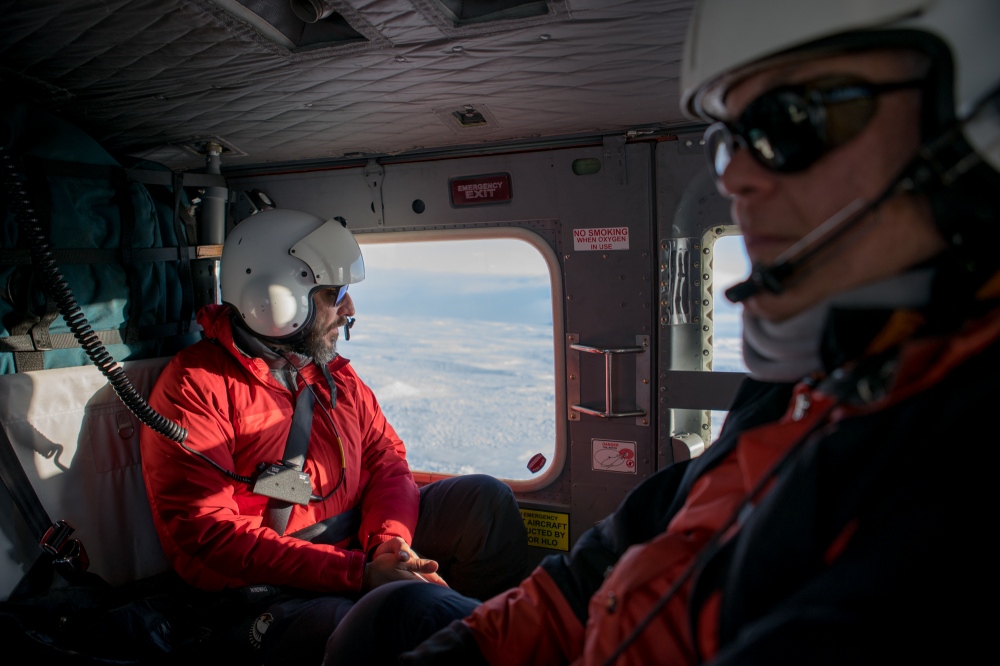 11 of 16 © 2021 Daniel Uhlmann
Dr. Phil Wannamaker and Dr. Paul Bedrosian en route to an installation on Mt. Erebus in a Bell 212 helicopter. 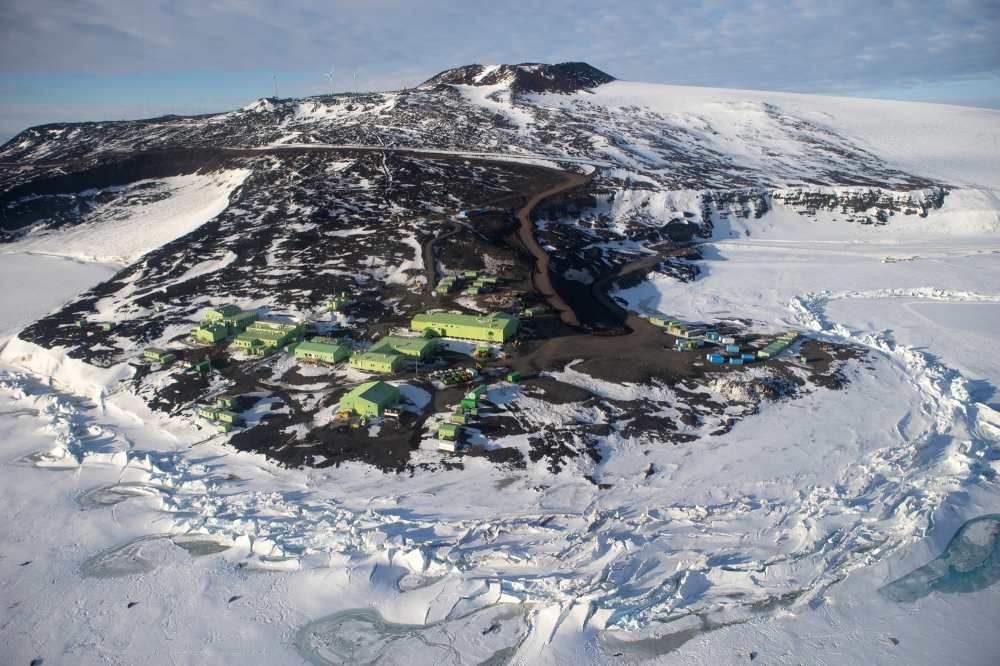 12 of 16 © 2021 Daniel Uhlmann
Scott Base, Antarctica. This is New Zealand's primary research station on the continent and is only a few kilometers away from McMurdo station, the United State's (and Antarctica's) largest scientific research station. 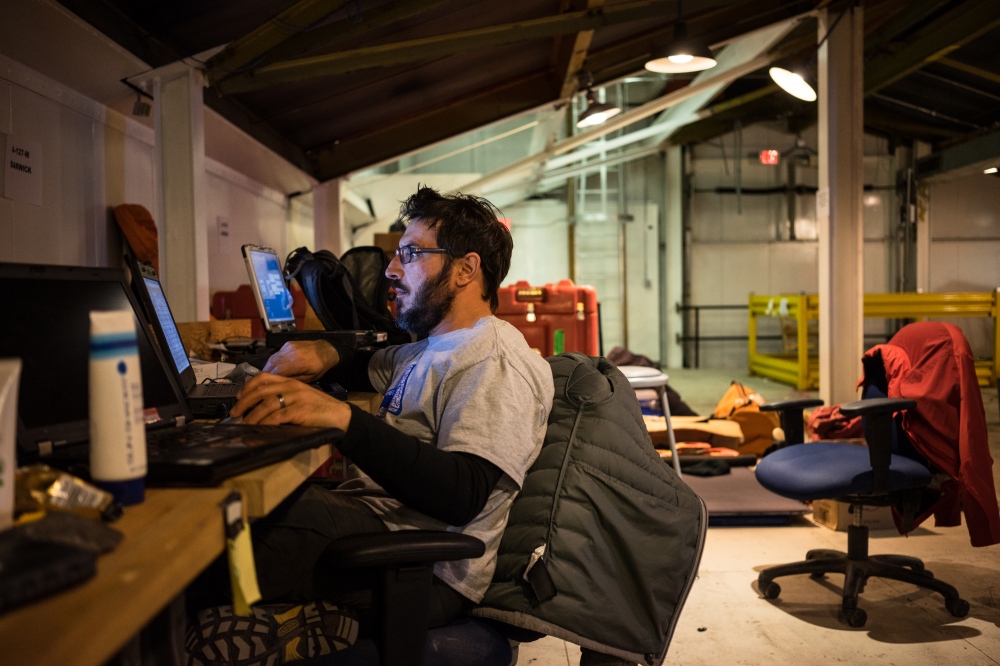 13 of 16 © 2021 Daniel Uhlmann
4 January 2017. Dr. Paul Bedrosian works with raw geophysical data inside of a storage warehouse in McMurdo station. McMurdo, build in 1956 by the US Navy, is a sprawling array of mostly-old buildings that serve the current mission of science research in Antarctica. Like US infrastructure as a whole, McMurdo is aging and past its due date for modernization. That said, the full-time population of workers keeps the "town" relatively intact; though some groups end up working in quirky spaces such as this. 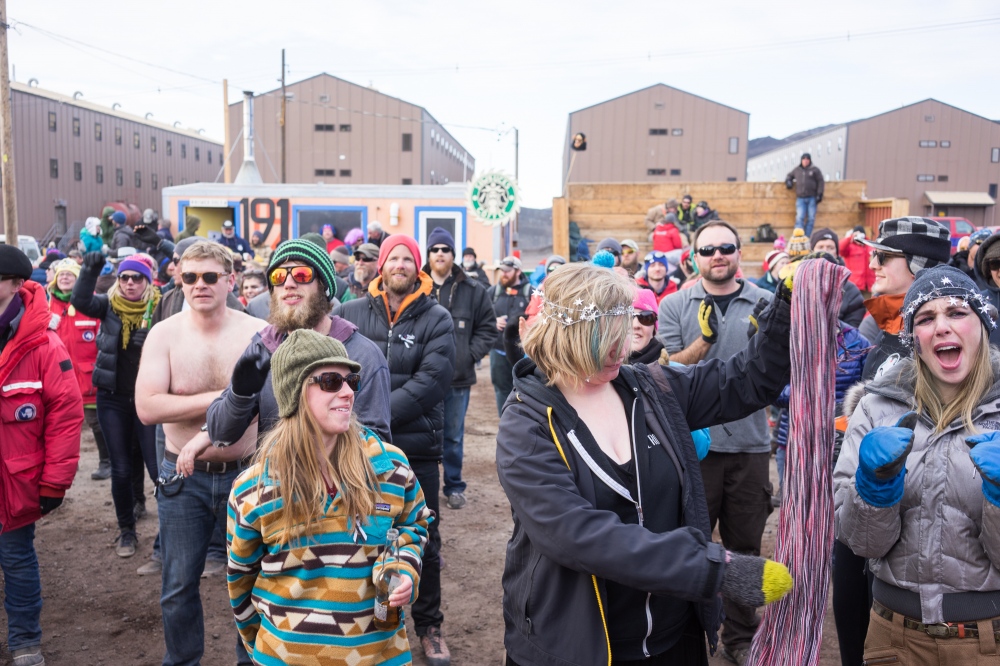 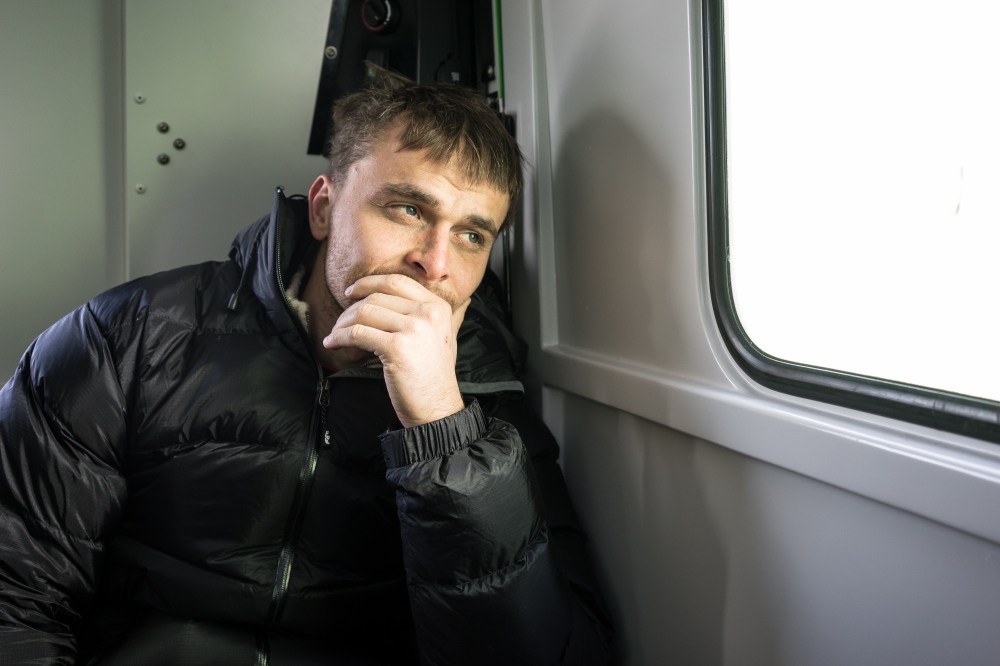 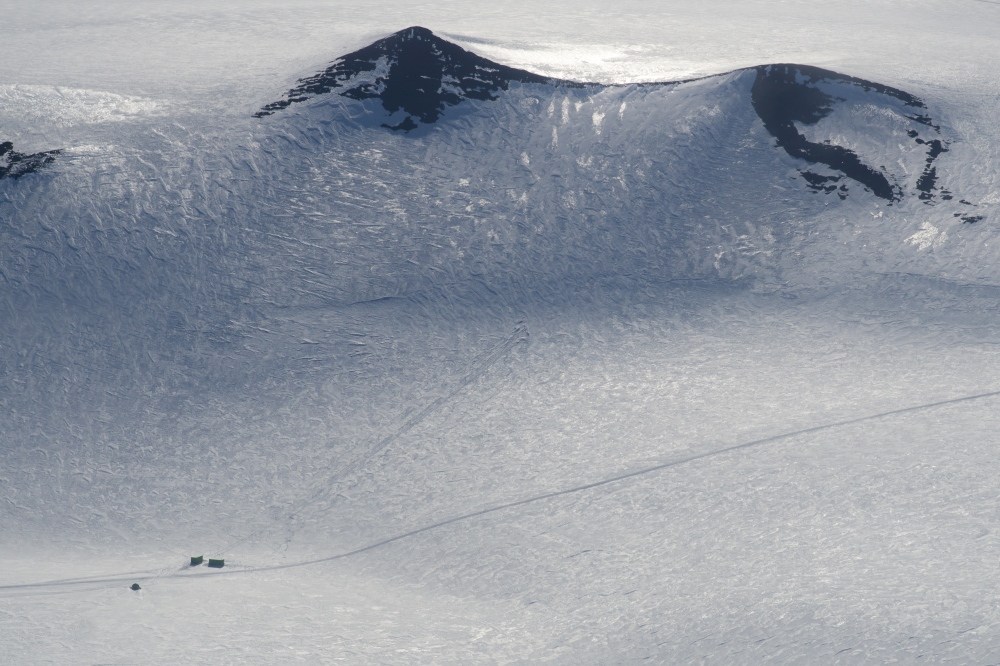 16 of 16 © 2021 Daniel Uhlmann
Hut Point Penninsula and ski tracks.
Public Story
Erebus
Credits: daniel uhlmann
Date of Work: 10/15/15 - Ongoing
Updated: 09/21/17
Location: mcmurdo, antarctica
Archived as:  Documentary, Education, Environment, Environmental, Landscape, Photography, Photojournalism, Science, Technology, Travel
Antarctica's Mt. Erebus is the southernmost active volcano on Earth. It continually spews molten lava from its crater into the frigid atmosphere. Two geophysicists, Graham Hill and Phil Wannamaker, assembled a team of scientists whose goal is to map the plumbing of the volcano down fifty kilometers into the earth . To do so they installed magnetotelluric sensors at 120 sites across Ross Island, the historic landmass of which Erebus is the highest point.

Getting to Antarctica and finding a means to access the volcano is a complicated task. It requires gaining funding and permission from both the United States' National Science Foundation and Antarctica New Zealand to mount a multi-national science experiment. No survey of its kind has been attempted previously on an Antarctic volcano.

The pristine environment they fly up to every day serves as a stark contrast to the eccentric culture and industrial spaces of America's McMurdo Station and New Zealand's Scott Base.

Being granted funds and permission to make a science experiment in Antarctica is the pinnacle of some people's careers. Only the very best in their fields are awarded funds, and competition is very difficult. The scientists have to prove the 'merit' of their work. This can mean a variety of things, and increasingly issues such as global warming take precedent. But hardcore geophysics such as this project have the ability to open up new understanding in the mechanics of the Earth's most basic processes.

Entwined within the complex and astounding logistical capabilities of both the US and New Zealand Antarctic programs, Wannamaker and Hill's team uses helicopters, snowmobiles, and snowcats to access sites on glaciated mountain tops, coastal ice cliffs, and next to the molten crater itself. They face the continuous dangers of hidden crevasses, quick-moving storms, and beaurocratic red-tape. Despite the challenges the singular beauty of Antarctica maintains its lure on team and provides a worthwhile backdrop for their project.

By Danny Uhlmann / antarctica — Fosdick. A name known to very few. A place visited by even fewer. Nestled as a sub-range of mountains within..
Mar 27, 2020

By Daniel Uhlmann / antarctica — In November 2017 a team of paleobotanists and sedimentary geologists traveled to Antarctica in search of..
Nov 6, 2018

By Daniel Uhlmann — In spring 2012 our team of four voyaged in the remote northeast corner of Afghanistan, known as the Wakhan..
Jul 1, 2016

By Daniel Uhlmann — In Le Mont, a tiny village above the Arve river valley in the French Alps, two brothers work morning till..
Jul 1, 2016