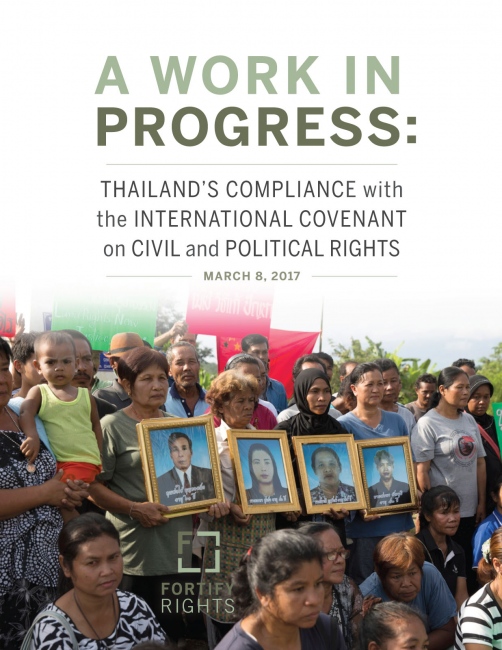 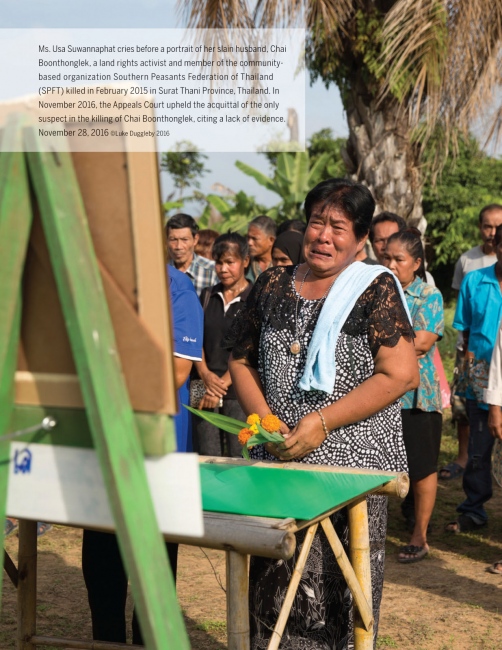 Always an honor to have an image gracing the cover of such an important publication by the human rights NGO Fortify Rights.

The cover image shows members of Southern Peasants Federation of Thailand (SPFT)–a community-led group advocating for land rights for farmers in Surat Thani Province—mourn the death of four of its members. Mr. Somporn Pattanaphum, Ms. Montha Chukaew, Ms. Pranee Boonrak, and Mr. Chai Boonthonglek are believed to have been killed due to their activities with SPFT. November 28, 2016

The inside image shows Ms. Usa Suwannaphat crying before a portrait of her slain husband, Chai Boonthonglek, a land rights activist and member of the community- based organization Southern Peasants Federation of Thailand (SPFT) killed in February 2015 in Surat Thani Province, Thailand. In November 2016, the Appeals Court upheld the acquittal of the only suspect in the killing of Chai Boonthonglek, citing a lack of evidence. November 28, 2016

I have been working on a long-term project about this community over the course of several years and will be returning next week. If you'd ike to see more pictures you can visit http://www.lukeduggleby.com/a-village-under-sieg

By Luke Duggleby — The attached Quilt is titled “The Poor Ought To Have A Place In The City” by Nutchanart..
Feb 2, 2020

For Those Who Died trying at MAIIAM Contemporary Art Gallery

By Luke Duggleby / Chiang Mai — In recognition of brave Thai human rights defenders past and present we opened For Those Who Died Trying..
Dec 16, 2019

For Those Died Trying the Album

By Luke Duggleby — It took a while to arrive from Canada but finally I got my hands on the CD of For Those Who Died Trying by..
Mar 19, 2019

By Luke Duggleby — With the Thai elections coming up here is my contribution to its coverage which focuses on the Commoners..
Mar 17, 2019

By Luke Duggleby — Last year I was asked to do a Tedx talk in Thailand about my work on human rights defenders in the country...
Oct 15, 2018

For Those Who Died Trying - TO BE RELEASED ON NOVEMBER 16

By Luke Duggleby — After many months of planning and organising, with a grant from the Earth Journalism Network and a..
Sep 12, 2018

By Luke Duggleby — Proud to have been asked to be part of a group Public Art Exhibition called "Tides that Bind" that will..
Apr 23, 2018

By Luke Duggleby — Early 2017 I collaborated with Human Rights NGO Fortify Rights in Myanmar to document the issue of..
Apr 23, 2018

By Luke Duggleby — On my last assignment for the Pew Charitable Trust I photographed fisheries agents probing a tuna fish boat..
Nov 20, 2017

On the Front Lines

By Luke Duggleby — My latest collaboration with the UK's Geographical Magazine - the Magazine of the Royal Geographical..
Nov 20, 2017

Exhibition: Side by Side - Women Human Rights Defenders 2018

By Luke Duggleby — With the photography now complete (as of yesterday) I am pleased to announce that 'Side by Side - Women..
Nov 15, 2017

By Luke Duggleby — Having returned from Sri Lanka a few weeks ago I have finally had time to edit my documentary about the..
Oct 13, 2017

By Luke Duggleby — I just arrived back in Sri Lanka to begin a 2 week long reporting fellowship that I was awarded earlier this..
Sep 12, 2017

A Village Under Siege in Al Jazeera

By Luke Duggleby — Aljazeera.com  published our most recent collaboration and a story very close to my heart. Over the..
Aug 10, 2017

By Luke Duggleby — Feeling extremely proud to be one of two winning recipients for this years South Asian Journalists..
Jul 3, 2017

By Luke Duggleby — My last portrait shoot for Forbes Magazine. What do you do if you have the boss of a seaweed snack empire..
Jun 12, 2017

By Luke Duggleby — Honored to be part of a 13 page spread in Germany's mare magazine this month. The story is about Pakistan's..
Jun 8, 2017

Even Harley-Davidson Can’t Resist the Tug of Overseas Factories

By Luke Duggleby — Last weeks assignment for the New York Times in Bangkok was to illustrate an article about the iconic..
May 26, 2017

Instagram takeover of new photography initiative in the North of England

By Luke Duggleby — This week I'll be posting and supporting the @lensthinkyorkshire instagram feed. This new initiative aims to..
Mar 27, 2017

For Those Who Died Trying in Belgium

By Luke Duggleby — Between 3 March and 3 April my documentary FOR THOSE WHO DIED TRYING will be exhibited at the Cultuurcentrum..
Mar 4, 2017