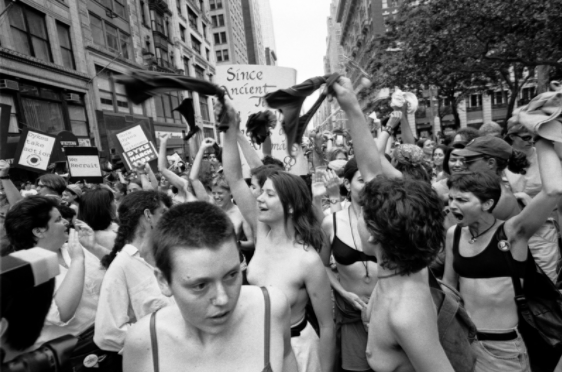 Donna's first retrospective opens at the Cortona On The Move Festival in Cortona, Italy on July 13, 2017

A four-decade-long journey: that of the American woman and of Donna Ferrato’s life and career. “American Woman” is the first time that photographs from Ferrato’s domestic violence, personal, and swingers’ archives are brought together into one exhibition.

The photographs never condemn the women in them; if there is condemnation it is for the role society has constructed for them. The images are a study of the objectifying male gaze, as well as the female gaze—Ferrato’s own. They show the links between sex, love, and violence.

“American Woman” is broken up into three general time periods and themes following Ferrato’s career as a photographer and the changing roles women have undergone in the United States since the 1970s: a journey through women’s liberation, submissiveness and ultimate awakening.

Join us for the opening at Cortona on July 13th, or see the exhibition any time until October 1st, 2017.

THE TRIBECA SHOW - About the Opening Night

By Donna Ferrato — Yesterday we had a great opening night of The Tribeca Show at Apex Art in Tribeca. Many people came to check different bodies of work about the..
Dec 6, 2019

By Donna Ferrato — Tribeca is a die-hard place where all nature of spirit co-mingles. On Halloween, families with kids run (not too wild) in the streets, hunting for..
Oct 30, 2019

By Donna Ferrato — Donna Ferrato receives the PHotoESPAÑA award for excellence. This recognition is for her documentary photography and her struggle and..
Jun 11, 2019

By Donna Ferrato — Holy is forged from one woman's outrage against a woman-hating world. May it anger you. Donna Ferrato 's radical photographs show what..
Jun 11, 2019

By Donna Ferrato — Holy exhibit at Circulo de Bellas Artes Madrid is part of my upcoming book of the same name to be published this fall by PowerHouse. Holy is forged..
Jun 10, 2019

SILVER: Stories that shine a light on the wisdom and wildness of old women. By Irene van Nispen-Kress

By Donna Ferrato — Every woman in the trail-blazing book by Dutch photographer, Irene van Nispen-Kress, is a rare bird. Bound together in SILVER they epitomize what..
Apr 18, 2019

By Donna Ferrato — Being invited to Dubai for HIPA's 8th annual photography award as a judge was an honor.  I was one of five professionals who had worked..
Mar 28, 2019

By Donna Ferrato — Although the PHotoEspaña workshop was only 48 hours, it was meaningful. Every student asked for stronger tools in their quest to become..
Mar 22, 2019

By Donna Ferrato — I'm pleased to announce three of my Tribeca photographs are being auctioned to raise vital funding for Vera Trifunovich's amazing "..
Dec 2, 2018

By Donna Ferrato — It's kinda fun to live in a neighborhood where you leave the house and run into Taylor Swift, leaving for Turkey for a concert. I found..
Jul 25, 2018

From Behind Closed Doors to #MeToo: A Conversation with Donna Ferrato and Nona Willis Aronowitz

By Donna Ferrato — Marching for our Lives felt like being born again. Back in 1968 the peace and love generation said "we don't trust anyone over 30. You screwed up...
Mar 28, 2018

MacLean's Interview: What is wrong with white women?

By Donna Ferrato — Donna Ferrato, the renowned photographer known for her work on domestic violence, looks back on the Women’s March as ‘the end’ Text &..
Feb 28, 2018

By Donna Ferrato — May 25-June 3, 2018 With Donna Ferrato, Tomeu Coll, & special guest Letizia Battaglia The first in a series of thought-provoking photographic..
Feb 26, 2018

By Donna Ferrato — She didn’t run into a door. She didn’t get punched by a stranger in the street. Someone who claimed to love her did this. The nurses and..
Feb 14, 2018

By Donna Ferrato — If you've wanted to join me on one of my workshops but can't get away for a whole week, now's your chance to work with me one-on-one in a single..
Jan 22, 2018

By Donna Ferrato — Thank you for Saturday! A short but sweet photography event with great street photographers and some of the best photo editors in the business..
Jan 22, 2018

By Donna Ferrato — We are excited to offer a selection of new and vintage images, as well as one limited edition poster, for sale in the new online print shop! Some of..
Dec 12, 2017

Tomorrow, the chance to win a portfolio review with me

By Donna Ferrato — Tomorrow I'll be giving a lecture at K&M Camera, NYC. The talk is free and open to all, and you can register here . I'll also be announcing a..
Aug 22, 2017

An Evening with Donna Ferrato by K&M Camera

By Donna Ferrato — Preview, event .  Join us Wednesday the Twenty-Third for a talk with photographer and activist Donna Ferrato. Donna will be touching on issues..
Aug 20, 2017

TIME's "100 Photographs: The Most Influential Images of All Time"

By Donna Ferrato — On Friday, Time 's special issue featuring the "100 Most Influential Images of All Time" hit news stands and launched on their special website. It..
Nov 21, 2016