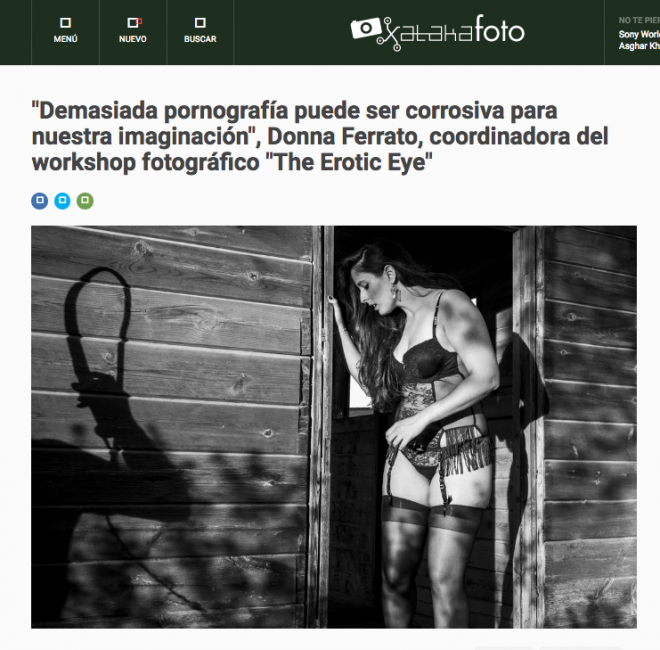 Spanish speakers can read the interview on Xatakafoto, and for everyone else please read the English version below. Even if you don't speak Spanish check out the Xatakafoto post for the accompanying photographs.

When did sex and eroticism start to be a theme that has such an influence on you?

Donna Ferrato: It began in Paris in 1977. I was an impressionable young divorcee, traveling alone, sleeping on park benches to save money and hungry all the time. No possessions except for a taped-up red and green Leica M4 around my neck and the gift of an insatiable imagination. When I saw the romance happening with Parisians and their daily bread, I felt I had to make photographs of the fresh, hot, unwrapped baguettes being carried away as far as my eyes could see. All that my erotic eye could see were people marching off to make either war or love with the staff of life. The baguette became my muse.

DF: We don’t use models. We meet people. We find each other. Everything springs from an encounter.

By the way, students are not allowed to have sex with the subjects. Everyone is treated with the utmost respect.

X: You are not alone developing these workshops. The photographers Jane Evelyn Atwood and Tomeu Coll work with you, so we can say that you are a team. How is the experience of directing a workshop? What experiences and feelings bring these two photographers to the workshops?

Jane Evelyn Atwood is a champion in the world of photography. She is an ardent humanist, but she also has a wicked eye for symbolic details. I adore her as a sister, a friend, and one of the best photographers I know. I trust her commitment to her subjects and especially to women. Her book Too Much Time is an unflinching look at how many young women have been robbed of their lives often just for defending themselves or their children.

DF: "Sex Eyes" would be boring. This would limit us to exploring only the act of sex, and reduce our photos to pornography. Too much pornography can be corrosive to the imagination and can give people a shallow perception of sexuality. Eroticism resides in the mind and comes from freeing yourself from social constraints, and embracing what we feel deeply but cannot articulate. It is not simply a body rush or a wave of physical pleasure. In Mallorca we found that we were photographing people's minds, and, I believe that's what gave their images so much power. It was more about the meaning of what was being done, not the actual act. It looked physical, but it was psychological and about trust.

X: Sexuality is the origin of our lives, and like it or not, one of the most powerful emotions that we experience as humans during our lives. Why do you think that in practically all societies there are taboos and strong legislation and control around sexuality and in some cases is used as a weapon that gives power?

DF: Many societies constructed taboos as a fearful response to the immense power women wield with their bodies and their sexualities. Out of resentment, men invented religions based upon male deities, creating patriarchal systems to weaken women, teaching them to feel ashamed of their sexuality. In the workshop we are attempting to metaphorically go back in time and change these negative societal biases. Staying in centuries-old houses, and with each photographer adopting the approach and eye of an assigned “dead photographer,” such as Gerda Taro or Philip Jones Griffiths, we aim to connect with rebels of the past who also sought to change their culture’s close-minded or old-fashioned views through the power of images.

X: What goals do you have after these workshops are finished and the book is published?  Do you want to open some discussions around sexuality in society with this work?

By Donna Ferrato / New York City — Dear Folks Thanks for the awesome response to our fundraiser.  However, I feel your help will be more..
Apr 10, 2020

THE TRIBECA SHOW - About the Opening Night

By Donna Ferrato — Yesterday we had a great opening night of The Tribeca Show at Apex Art in Tribeca. Many people came to check..
Dec 6, 2019

By Donna Ferrato / Tribeca — Tribeca is a die-hard place where all nature of spirit co-mingles. On Halloween, families with kids run (not..
Oct 30, 2019

By Donna Ferrato — Donna Ferrato receives the PHotoESPAÑA award for excellence. This recognition is for her documentary..
Jun 11, 2019

By Donna Ferrato — Holy exhibit at Circulo de Bellas Artes Madrid is part of my upcoming book of the same name to be published..
Jun 10, 2019

SILVER: Stories that shine a light on the wisdom and wildness of old women. By Irene van Nispen-Kress

By Donna Ferrato — Every woman in the trail-blazing book by Dutch photographer, Irene van Nispen-Kress, is a rare bird. Bound..
Apr 18, 2019

By Donna Ferrato — Being invited to Dubai for HIPA's 8th annual photography award as a judge was an honor.  I was one..
Mar 28, 2019

By Donna Ferrato — Although the PHotoEspaña workshop was only 48 hours, it was meaningful. Every student asked for..
Mar 22, 2019

By Donna Ferrato — I'm pleased to announce three of my Tribeca photographs are being auctioned to raise vital funding for..
Dec 2, 2018

By Donna Ferrato — It's kinda fun to live in a neighborhood where you leave the house and run into Taylor Swift, leaving..
Jul 25, 2018

From Behind Closed Doors to #MeToo: A Conversation with Donna Ferrato and Nona Willis Aronowitz

MacLean's Interview: What is wrong with white women?

By Donna Ferrato — Donna Ferrato, the renowned photographer known for her work on domestic violence, looks back on the..
Feb 28, 2018

By Donna Ferrato — She didn’t run into a door. She didn’t get punched by a stranger in the street. Someone who claimed to..
Feb 14, 2018

By Donna Ferrato — Thank you for Saturday! A short but sweet photography event with great street photographers and some of the..
Jan 22, 2018

By Donna Ferrato — We are excited to offer a selection of new and vintage images, as well as one limited edition poster, for..
Dec 12, 2017

Tomorrow, the chance to win a portfolio review with me

An Evening with Donna Ferrato by K&M Camera

By Donna Ferrato — Preview, event .  Join us Wednesday the Twenty-Third for a talk with photographer and activist Donna..
Aug 20, 2017

Retrospective + Workshop at Cortona on the Move

By Donna Ferrato — I recently had a conversation with a young survivor of domestic violence who lives in Kosovo. He hopes to..
May 19, 2017