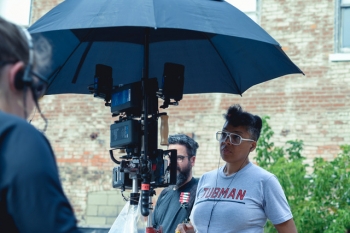 Ava DuVernay graciously asked DeMane to direct two episodes of the second season of her groundbreaking TV series Queen Sugar which airs on The Oprah Winfrey Network OWN. Ava has changed the entire landscape (and the numbers) by only hiring female directors and specifically hiring first-time female directors on Queen Sugar. She asked DeMane to be producing director of season three. In addition to producing the entire season, DeMane directed three episodes, including the season premiere. Queen Sugar was recently renewed for a fifth season.

Since then, DeMane has directed on For The People ; The Red Line for CBS, How To Get Away With Murder, Station 19 and YOU for Netflix. She was also Producing Director on Self Made: Inspired by Madam CJ Walker which premieres on Netflix on March 20th. She produced the four episode series and directed the last two episodes, including the finale. Most recently she  went back to Shondaland to direct an episode of their final season of How To Get Away With Murder. Her episode airs in April of 2020!

DeMane is also a Commercial Director with Sweet Rickey! Peep this behind the scenes.

She's a Filmmaker (two features she wrote and directed premiered In Competition at The Sundance Film Festival. LIFT, Kerry Washington’s first solo feature, is streaming on Amazon) and a Sundance Fellow (Class of '97) having attended both the Filmmaker’s and Writer’s Labs.