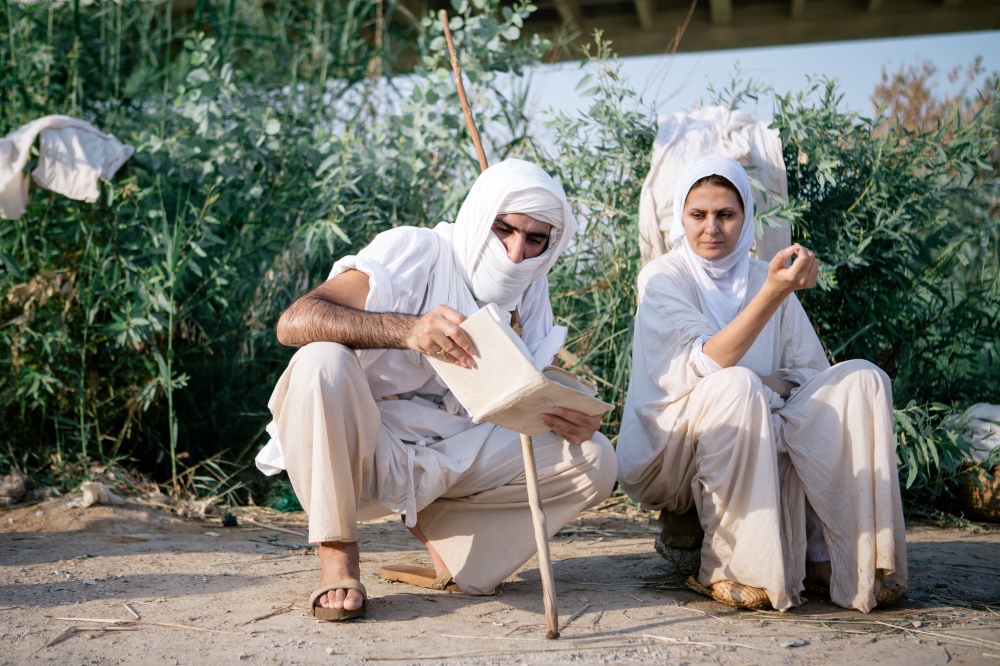 One of Mandea baptisms at occurs at the time of marriage.A mandean priest reads Ginza Rabba ( The Great Treasury) for bride before her baptize.Ahvaz, Iran.2016 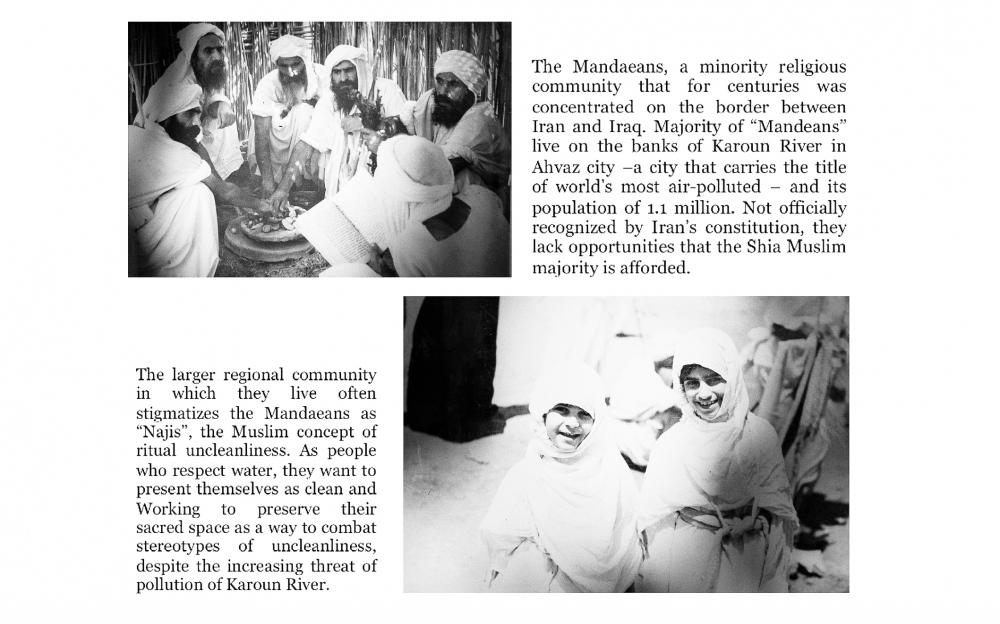 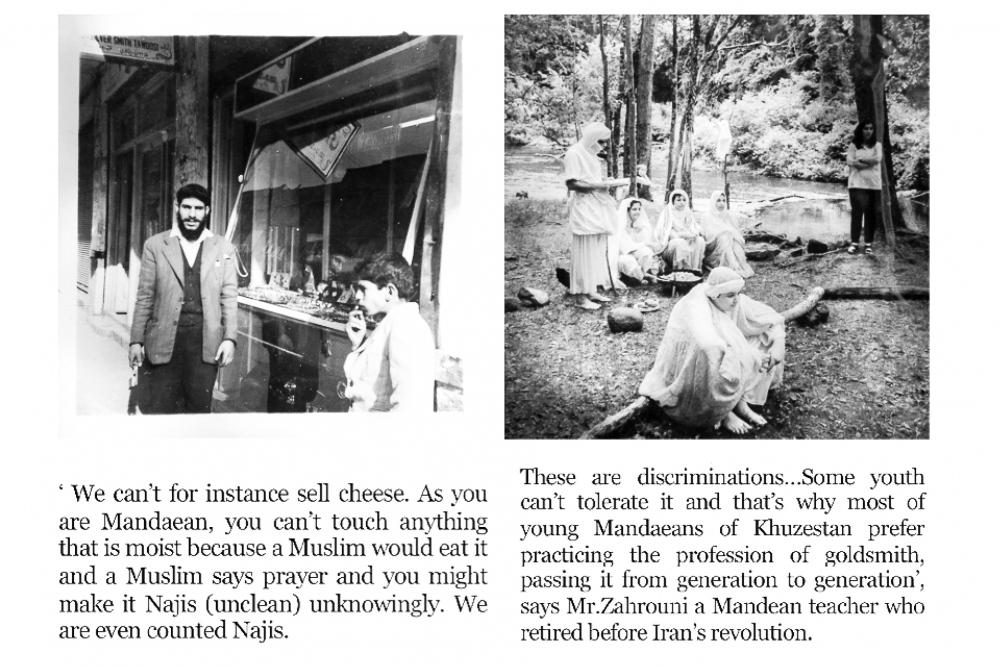 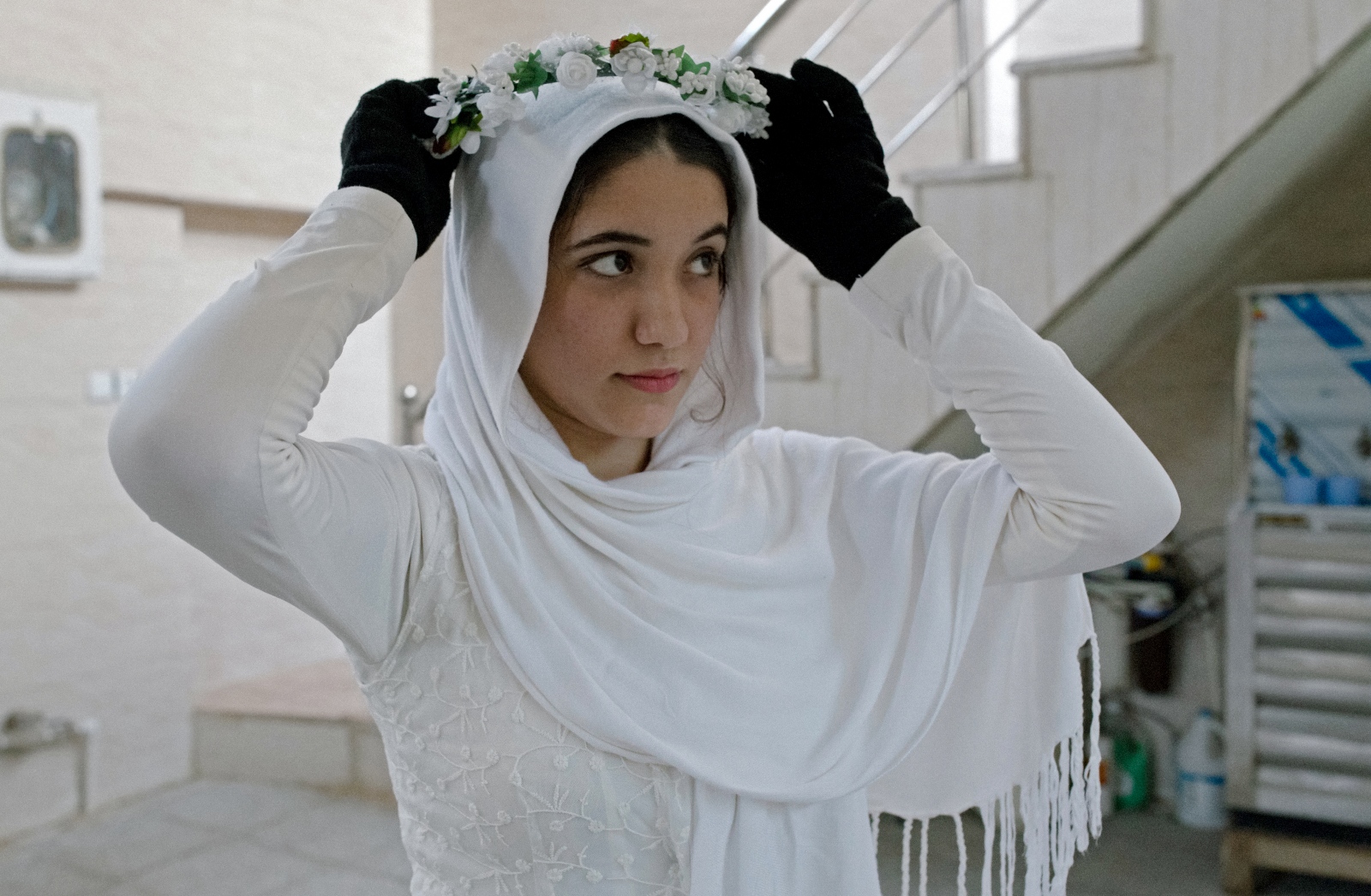 4 of 35 © 2021 Solmaz Daryani
The Mandaean women wear gloves throughout their menstrual cycle; water figures prominently in their rites. Still, the stigma inhibits their lives in Iran in a very visceral way. Ahvaz, Iran.2016 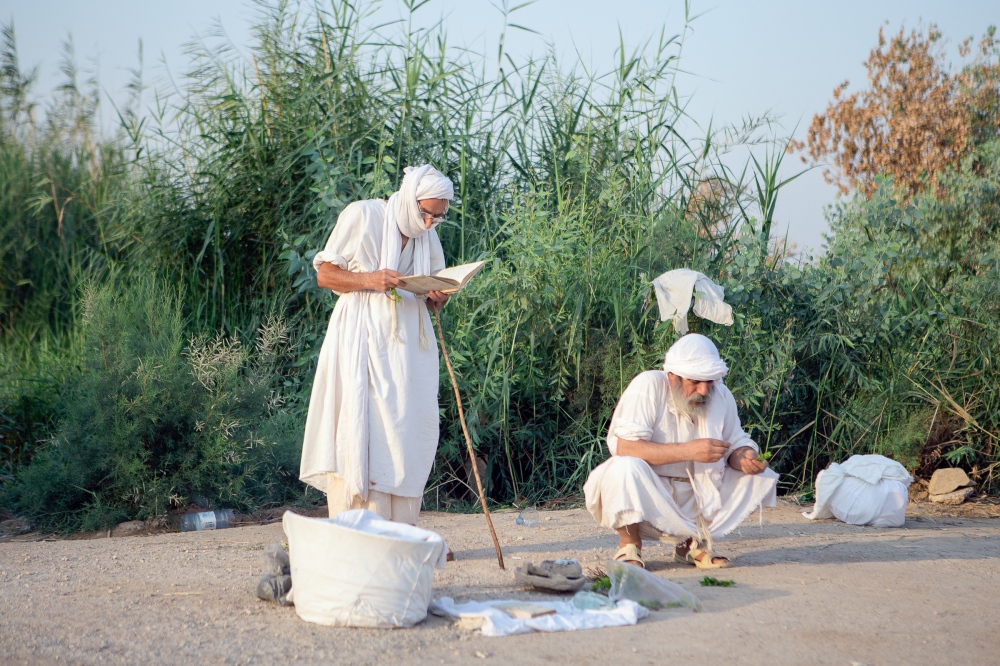 5 of 35 © 2021 Solmaz Daryani
One of the Mandean baptisms occurs at the time of marriage. A Mandean priest reads Ginza Rabba ("The Great Treasury") Scriptures as part of ritual purification. They dress in white “rastas” which symbolize purity and during the ceremony. Ahvaz, Iran.2016

6 of 35 © 2021 Solmaz Daryani
During the baptism ceremony of a recently married couple, the mother-of-the-bride suffers an asthma attack. The city of Ahvaz is the world’s most air-polluted, and many suffer from respiratory illness because of it. Ahvaz, Iran.2016 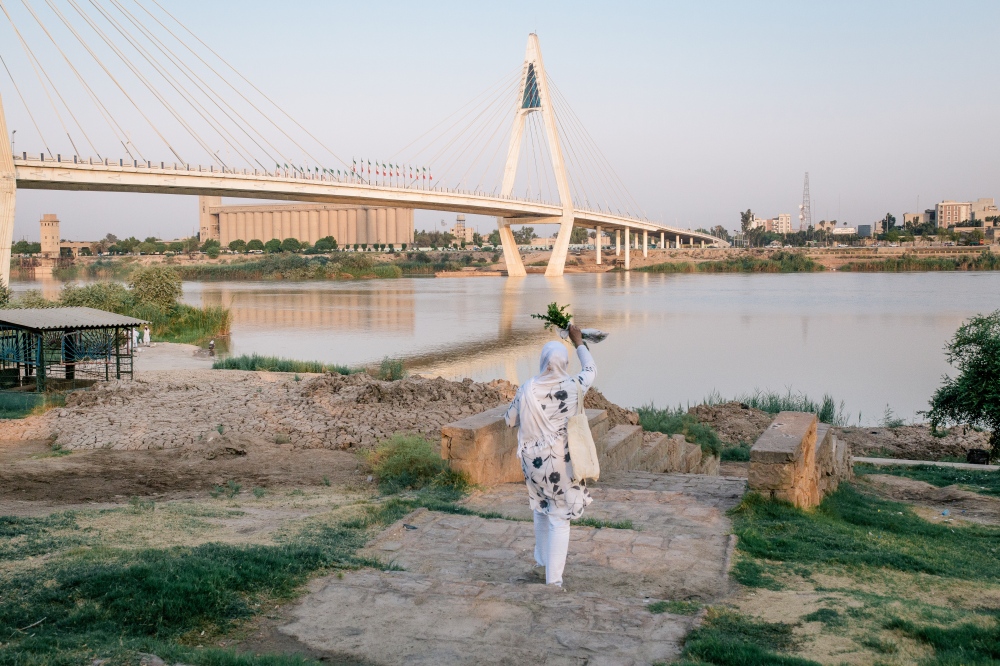 Don’t take photos of the places that are dirty,” says Ms. KHafaji, the administrator of the Mandi, the place of worship for Mandaeans. “Take photos here; of the parts that are clean. “As Mandaeans are occasionally and arbitrarily labeled as Najis (ritually unclean, by the Muslim community of Ahvaz), This two-fold tension between the Mandaeans' imagery of the purity of the Karun River and the Muslim community's image of Mandaeans as ritually unclean as well as the reality of the pollution of the Karun river shape the story.Ahvaz, Iran.2016 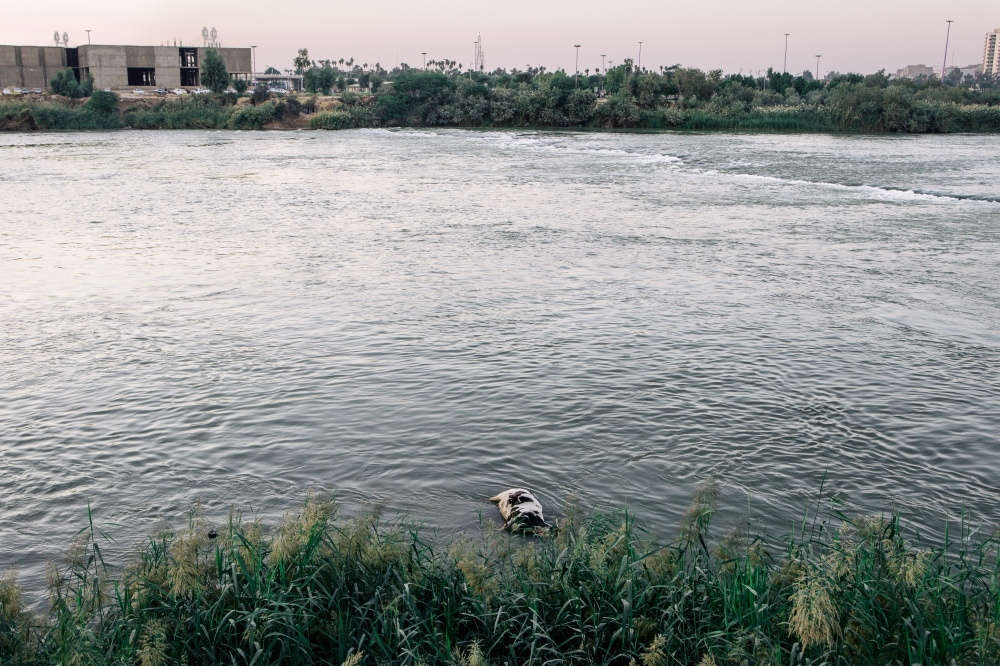 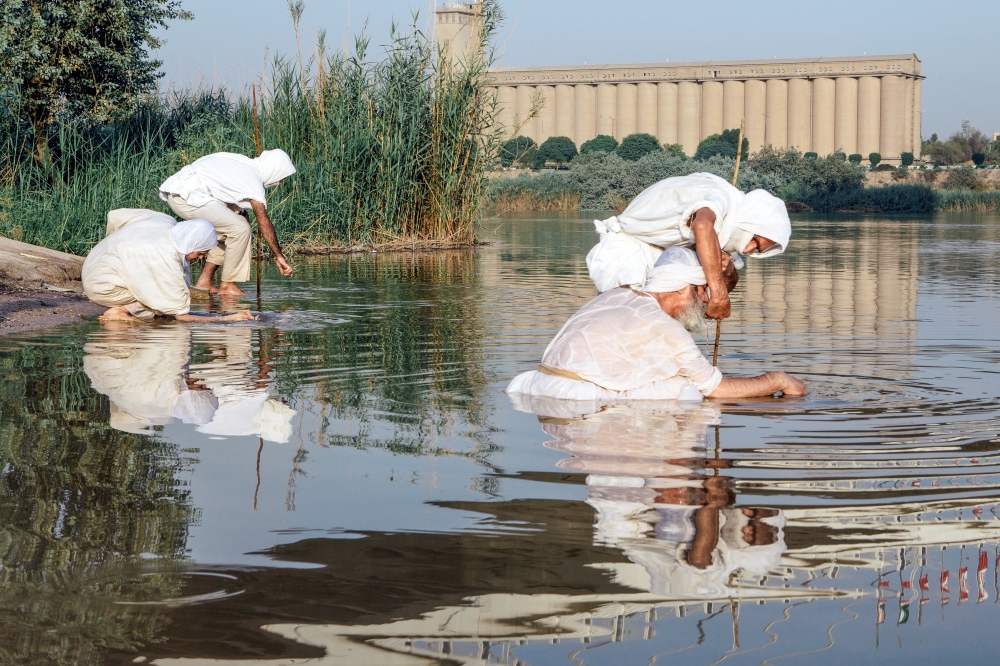 They have performed baptisms following rites of passage—birth; marriage; illness; travel; sin. They immerse themselves in the water. They imbibe it during their religious practices. According to their doctrine living water is their closest connection to the world of light. But the water that runs through the Karun is also heavily polluted with a discharge of industrial and agricultural waste into the river. Ahvaz, Iran.2016 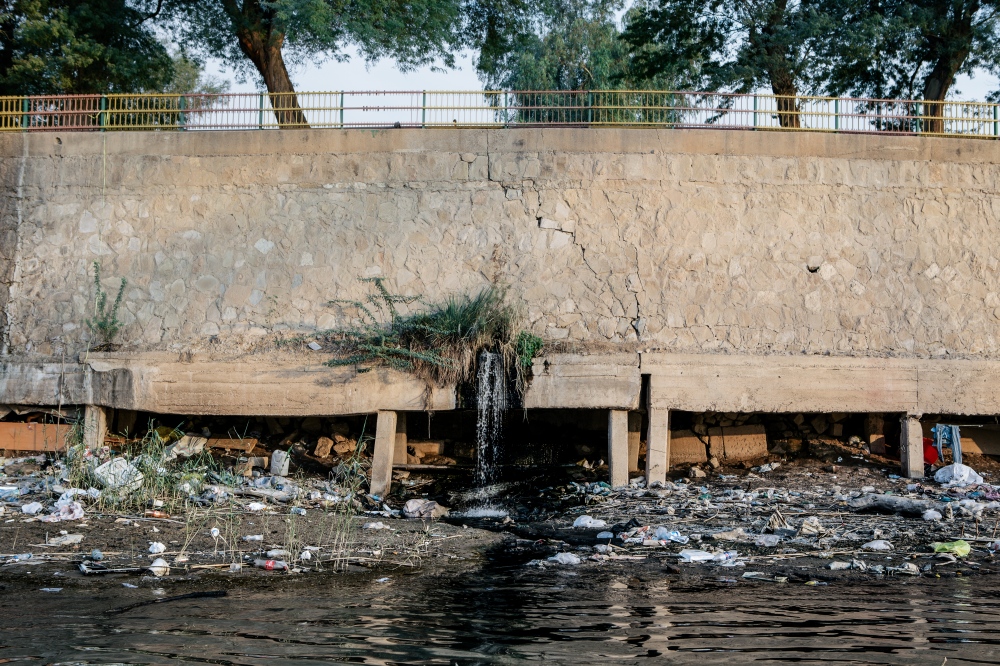 Karun River with the length of 890 Km, is the longest river in the country which flows along many industrial and agricultural zones, however the discharge of untreated urban wastewater and industrial effluent, and the uncontrolled discharge of solid wastes directly into Karoon River. Ahvaz city, Iran.2016 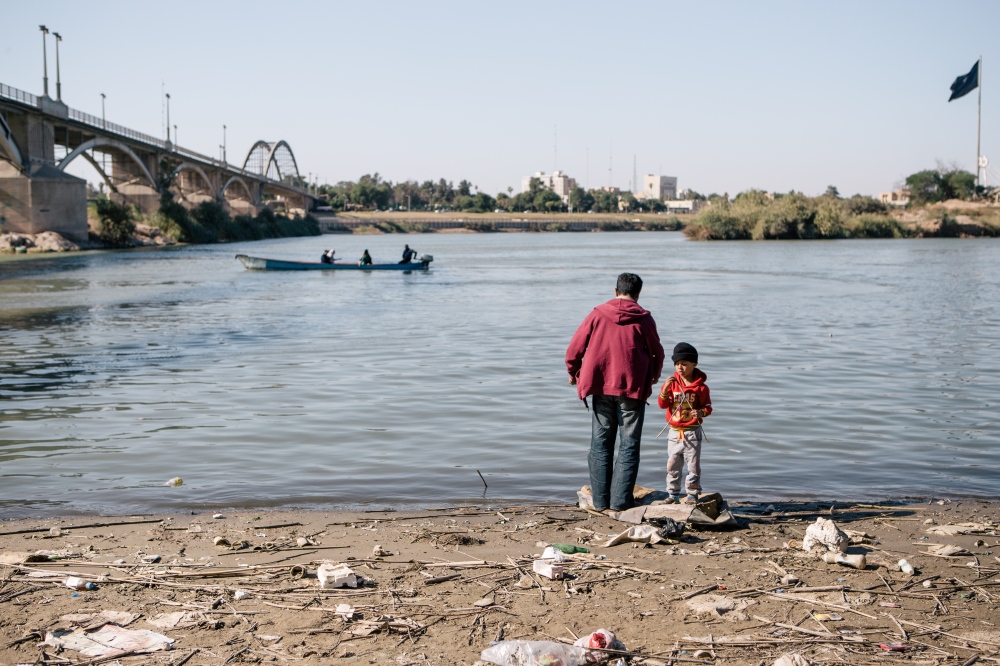 11 of 35 © 2021 Solmaz Daryani
According to Mandaeism, any living water—that is, water that is in flux—serves as a connection between the elevated world of light and the earthly world we inhabit. Strict adherents of the faith believe that running, living water is impervious to contamination. Ahvaz, Iran.2016

On the banks of the Karun River, crushed bottles litter the silt like dead fish; the plastic glints like scales. A man, wearing a white shirt, pants and turban, stands at river’s edge with arms outstretched, his toes touching the tide, as he meditates in prayer. Ahvaz, Iran.2016

14 of 35 © 2021 Solmaz Daryani
Khuzestan, the most industrialized province of Iran, is a hub of heavy industry, including petroleum, petrochemical factories, and gas and sugar refineries. Not only do they rely heavily on the water, but due to a lack of infrastructure, they also release their wastewater directly into the river. As of 2006, more than 315 million cubic meters of effluent industrial sewage was entering the Karun River annually.Ahvaz, Iran.2016 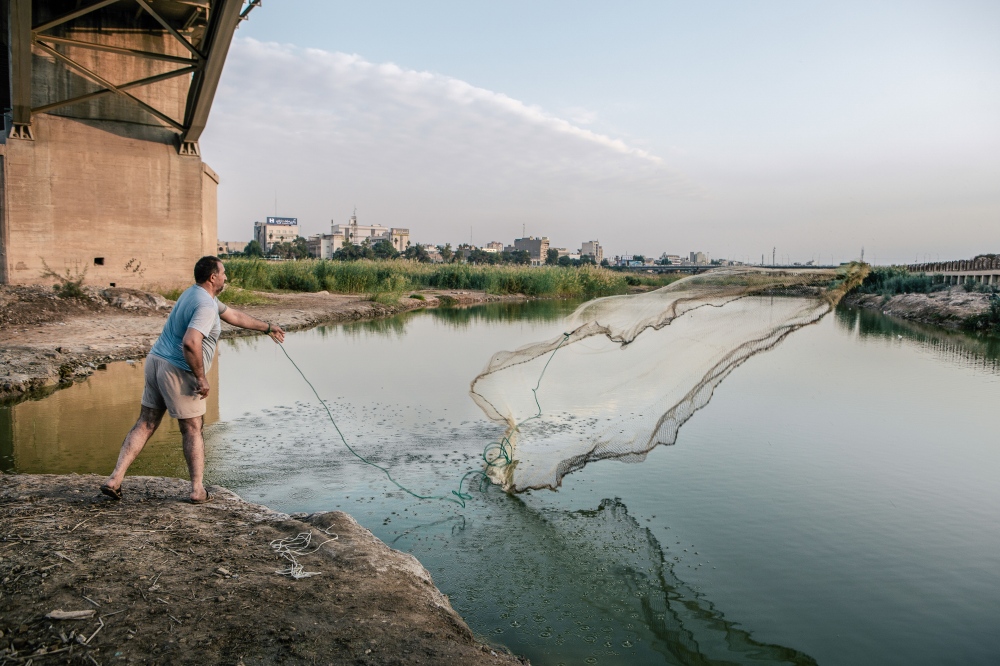 A local fisherman throws his net into the Karun River close to where Hospital waste goes into the water. Overexploitation of the Karun have spoiled the vitality of the critical water source and turned its blue waters green. Ahvaz, Iran. September 2016 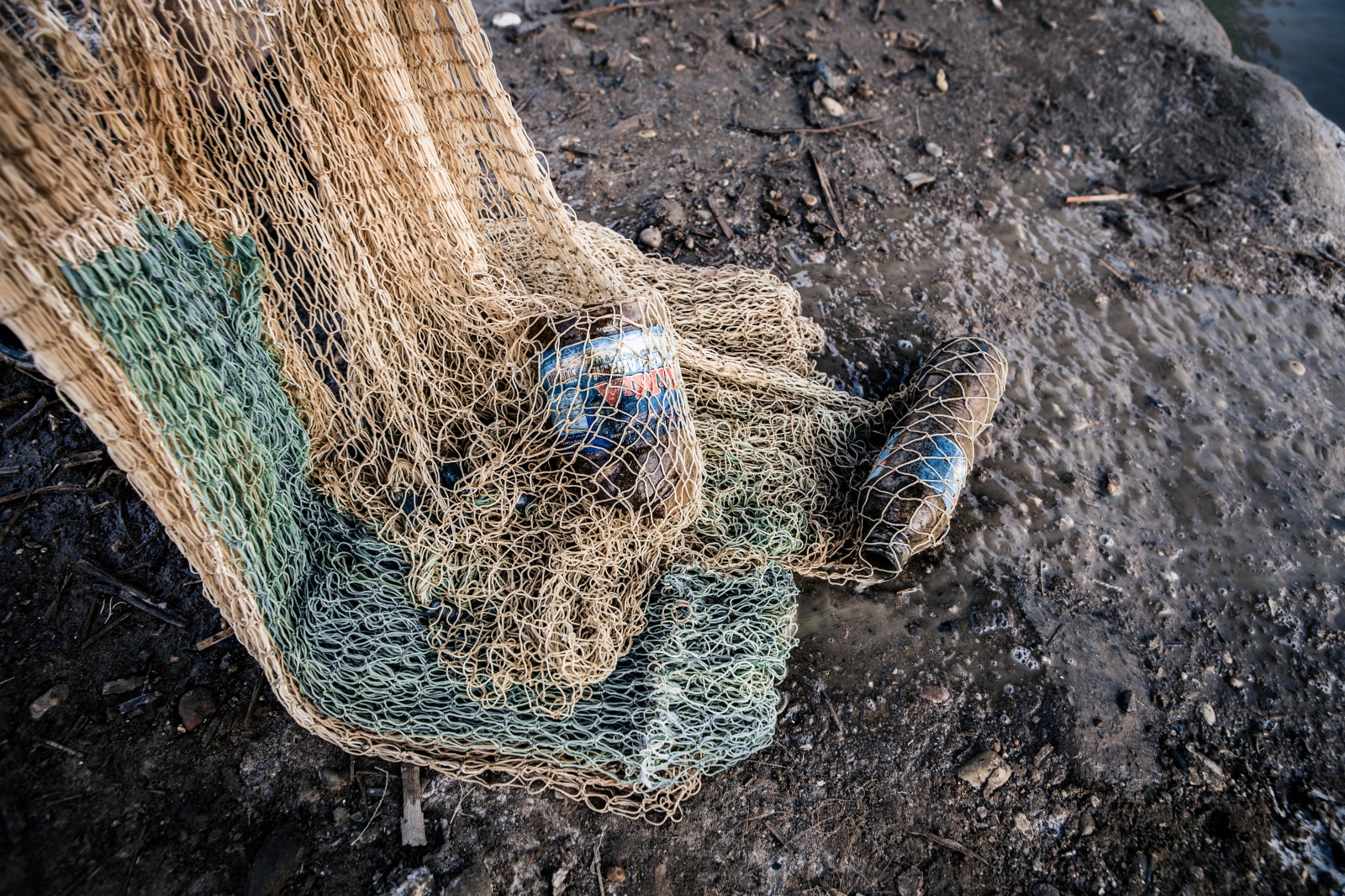 16 of 35 © 2021 Solmaz Daryani
Industry and overexploitation of the Karun have spoiled the vitality of the critical water source and turned its blue waters green. The Karun River rushes from its headwaters in the Zagros mountain range through the Khuzestan plain. As Iran’s largest river, it is a lifeforce—not just for the millions of residents of Ahvaz, but for Iran at large. More than 70 per cent of the four million that live in the Khuzestan province, depending on the Karun River and its tributaries.Ahvaz, Iran. September 2016 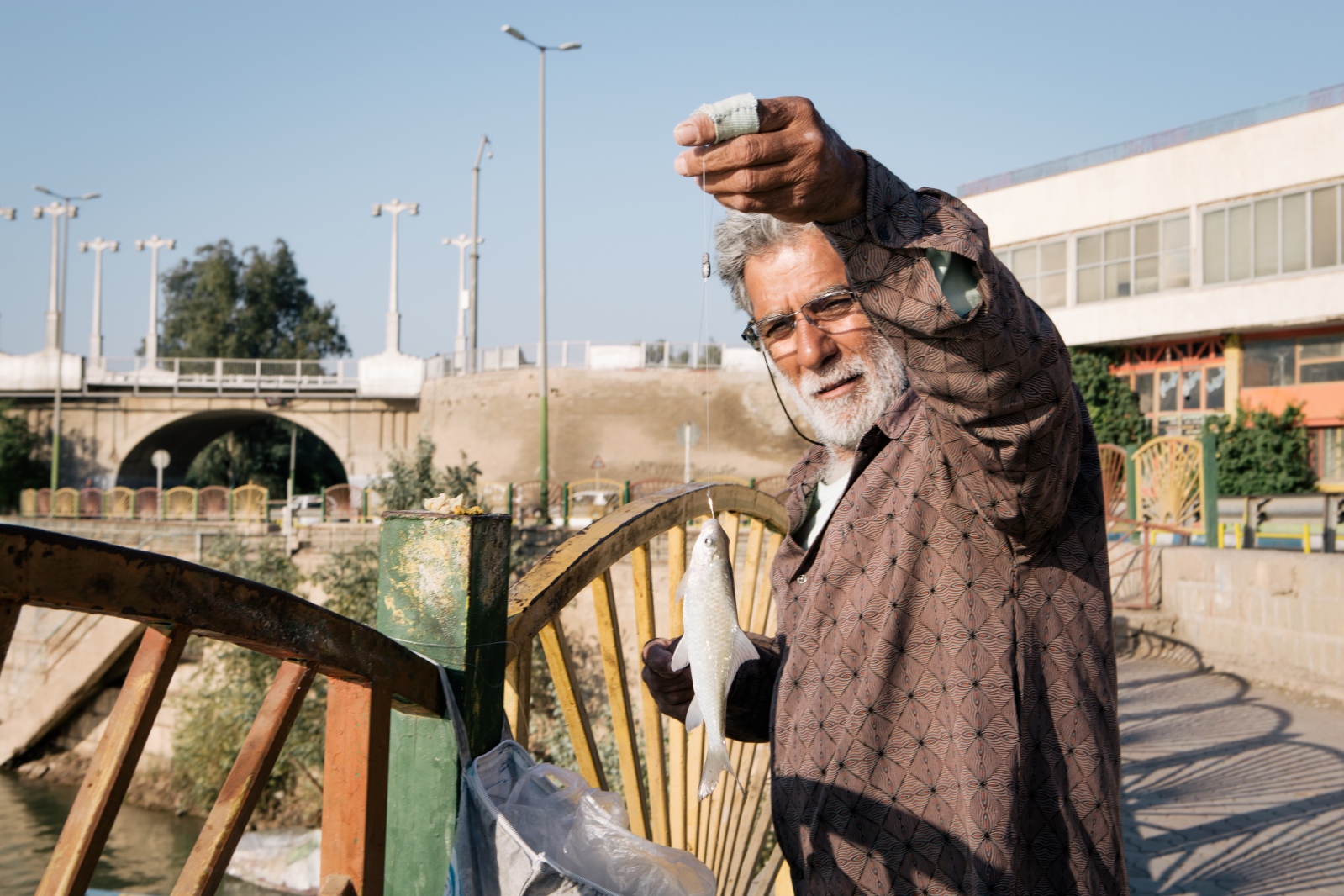 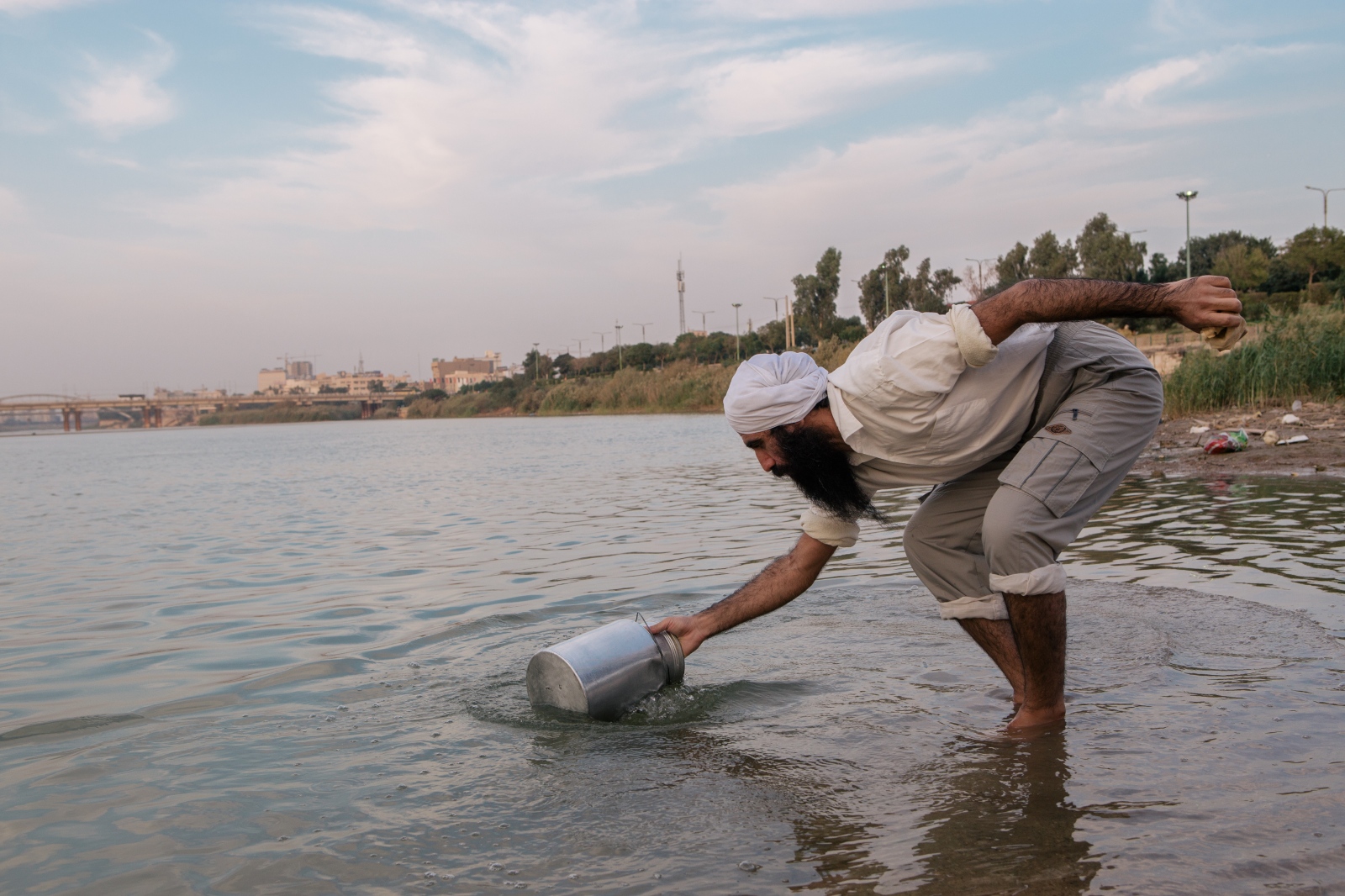 18 of 35 © 2021 Solmaz Daryani
A Tarmida – the second rank of Mandaean priesthood – stands ankle-deep in the water and uses an Aluminum pail to bail the water directly from the river. He will return home and boil the water, not as a means of purifying it, but rather, to separate the sediment. He drinks the water daily.  younger adherents avoid the weekly baptisms and reserve that close interaction with the water for the more significant occasions, like baptism rites after marriage. Siamak, a young Mandaean man, said he had become ill after drinking the water from the river during a religious ceremony. September 2016 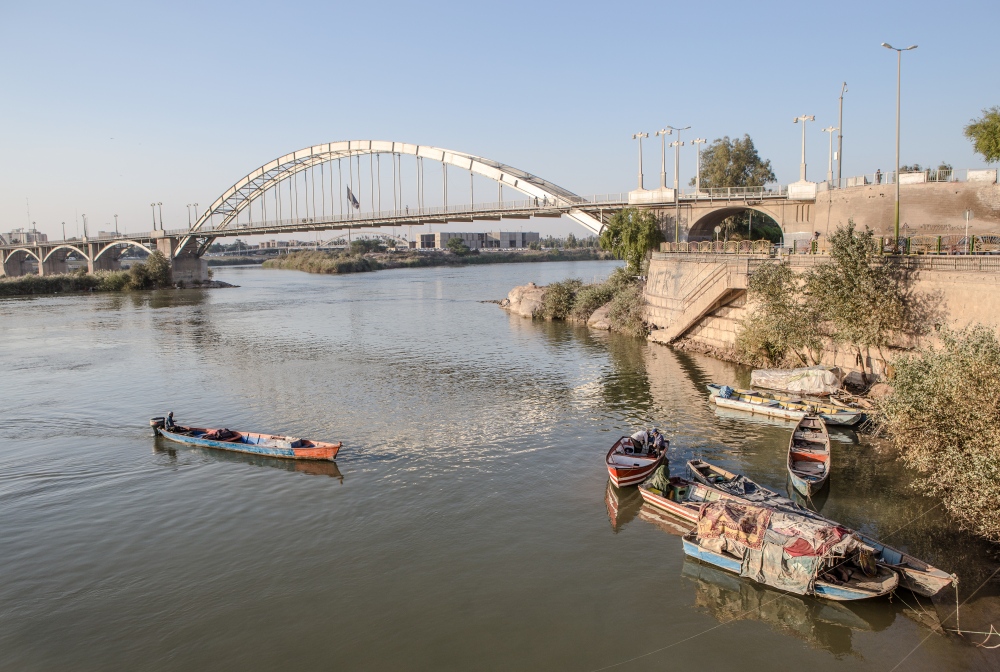 The banks offer a rare respite from the city of Ahvaz – a city that carries the title of world’s most air-polluted – and its population of 1.1 million. From here, the traffic that rushes across the Pol-e Sefid, the White Bridge, which crosses over the Karun and leads into the city centre is no more than a murmur. But the acrid smell of sewage is inescapable—a consequence of the volumes of wastewater that gush directly into the river, untreated. Ahvaz, Iran.2016 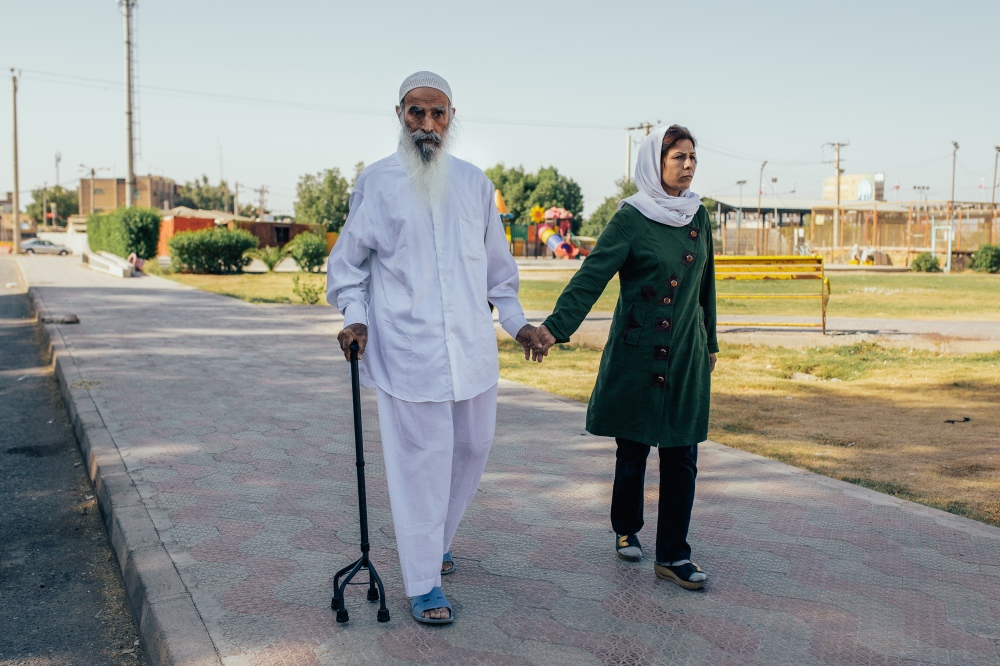 20 of 35 © 2021 Solmaz Daryani
Manije and his father are walking along the Karoun River.she says many of the younger Mandaeans are looking for opportunities abroad, many who have put down roots in Iran find it harder to leave. “We have not stayed here out of helplessness, It’s like, I have a family member with cancer. How can I abandon her? You know most of our youth wish that they could take Iran with themselves.” 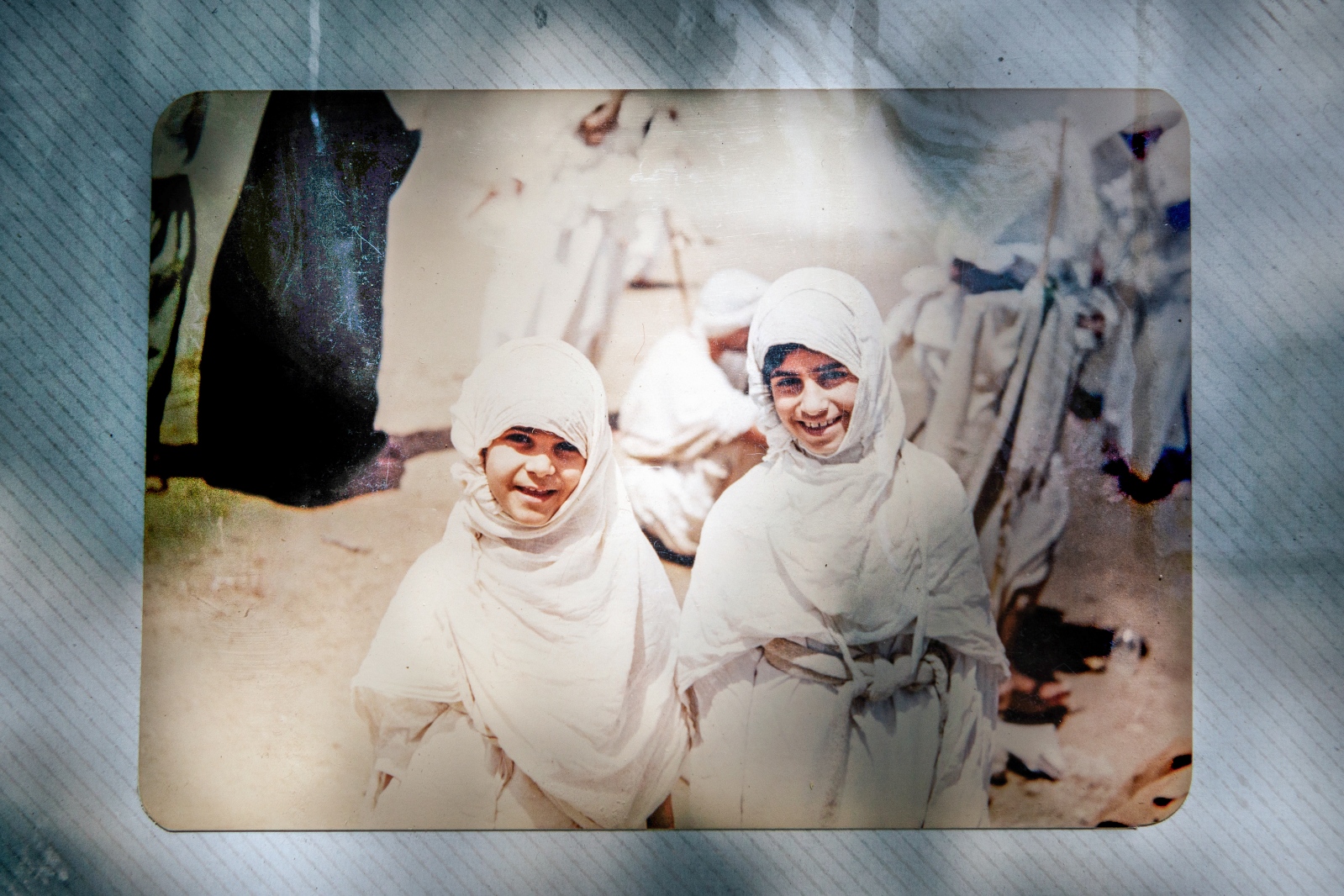 21 of 35 © 2021 Solmaz Daryani
Some young Mandaeans are not so convinced with imbibing water or baptize in Karun as an act of their faith. Some of them think it is not clean and they cannot drink it.”Ahvaz, Iran.2016 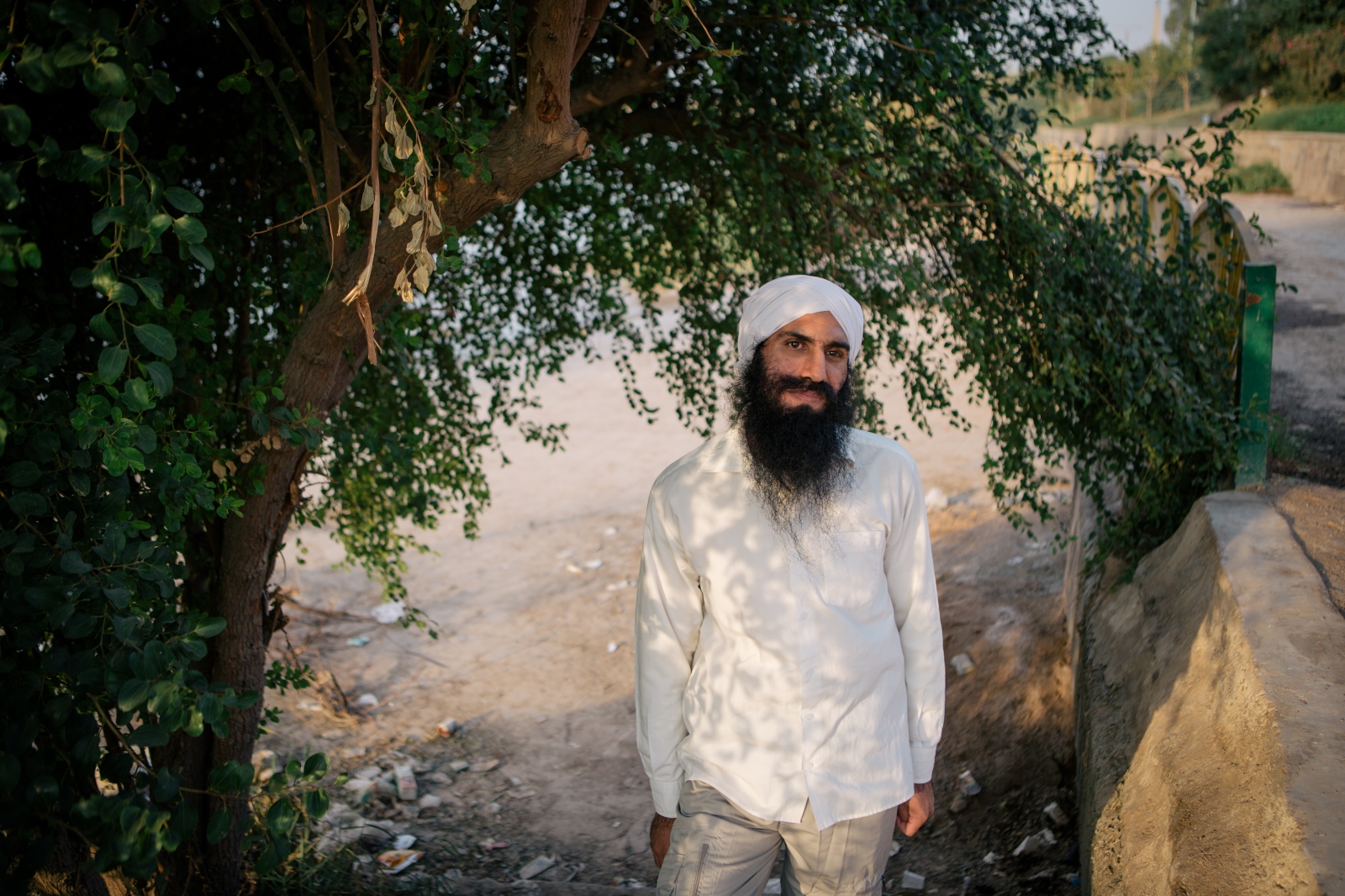 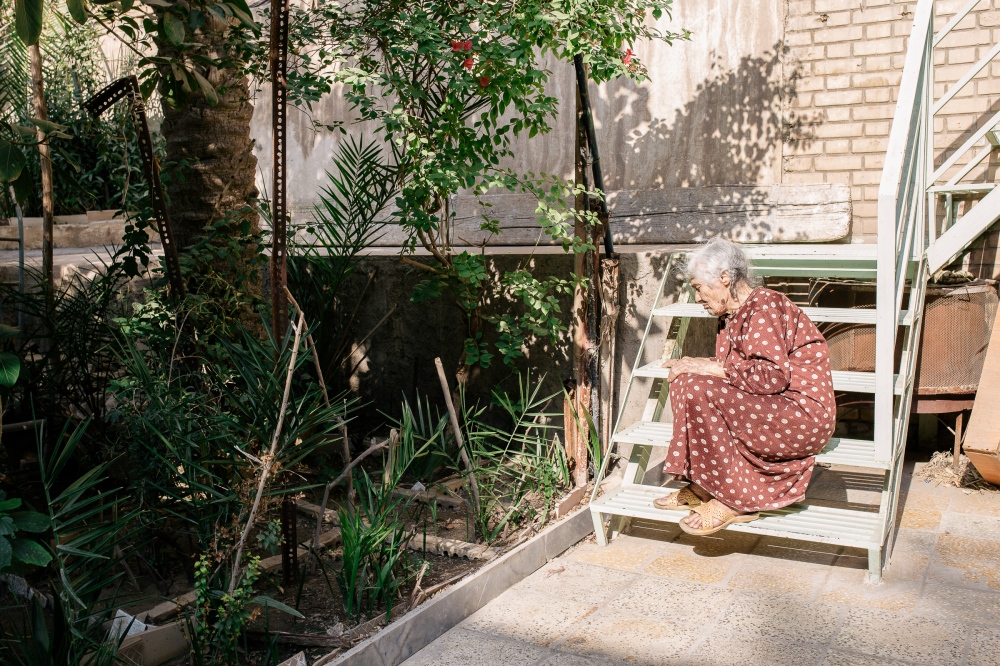 23 of 35 © 2021 Solmaz Daryani
Mrs.Choheili sits in the courtyard of her house.two of her daughter moved to USA.although she has Alzheimer but she remembers them and sometimes calls them loudly. she thinks they still live in the house. Ahvaz, Iran.2016 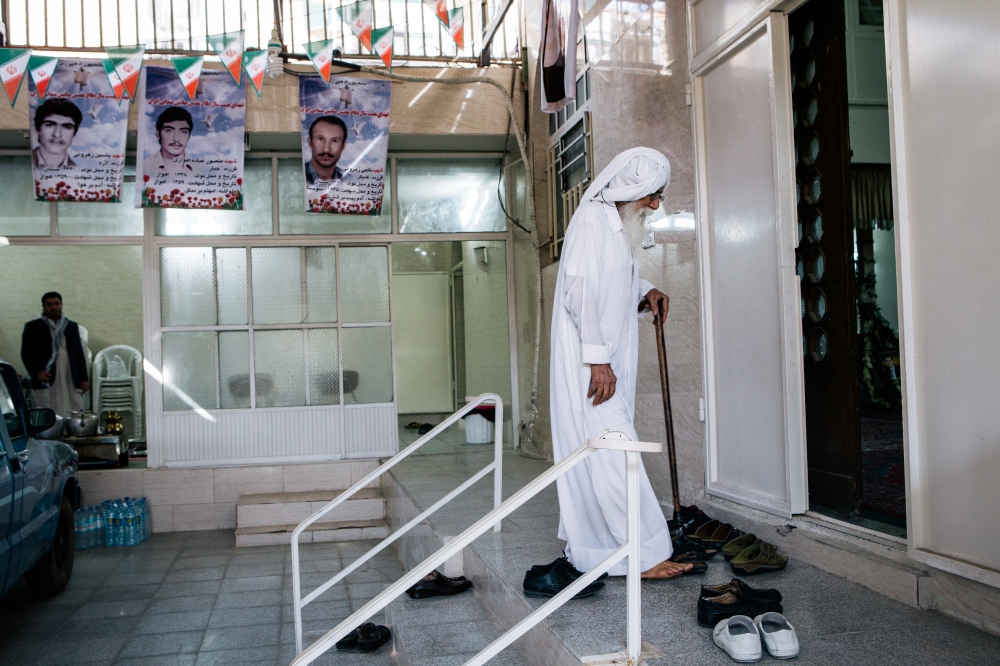 24 of 35 © 2021 Solmaz Daryani
A man enters The mandi and pictures of the Mandean martyrs of Iran-Iraq war are in the background. A Mandi is a place of worship for followers of Mandaeism. A mandī must be built beside a river in order to perform maṣbuta (or baptism) because water is an essential element in the Mandaean faith.Ahvaz.2016 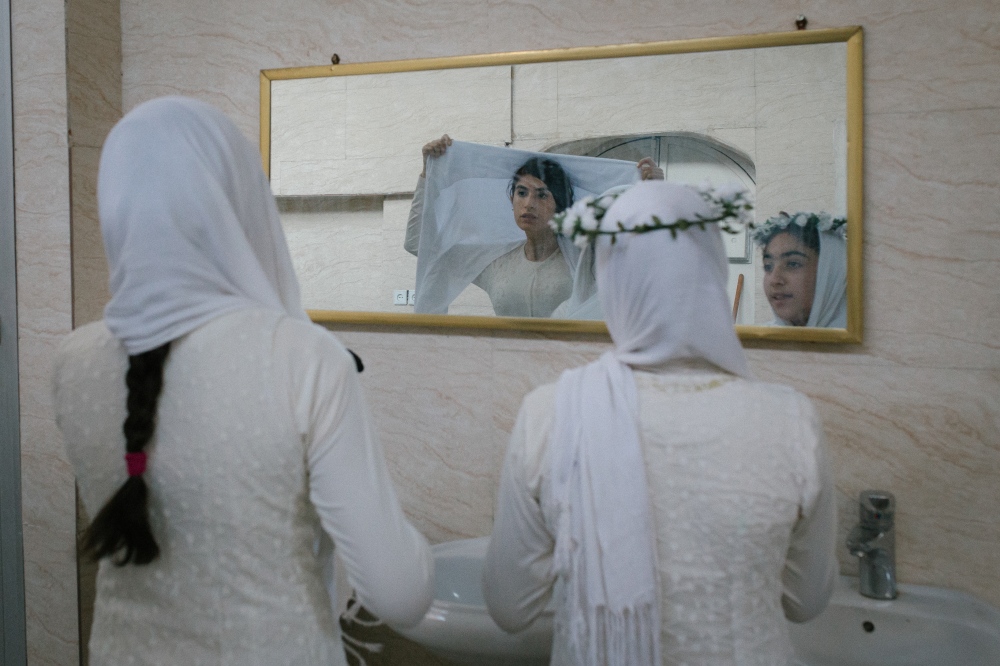 Saeede, 18, gets ready for a religious singing ceremony. She talks about the challenges she and her peers face as Mandaeans, who are perceived as "Najis" by the broader regional community.In school, some of her friends choose not to admit they are Mandaean, she says. Ahvaz, Iran. November 2016 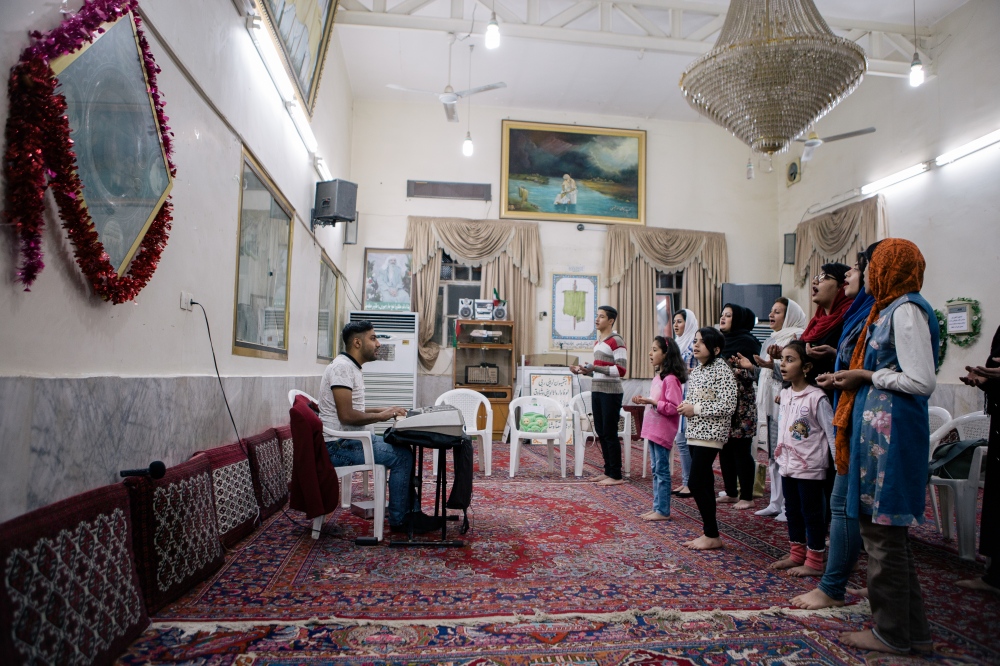 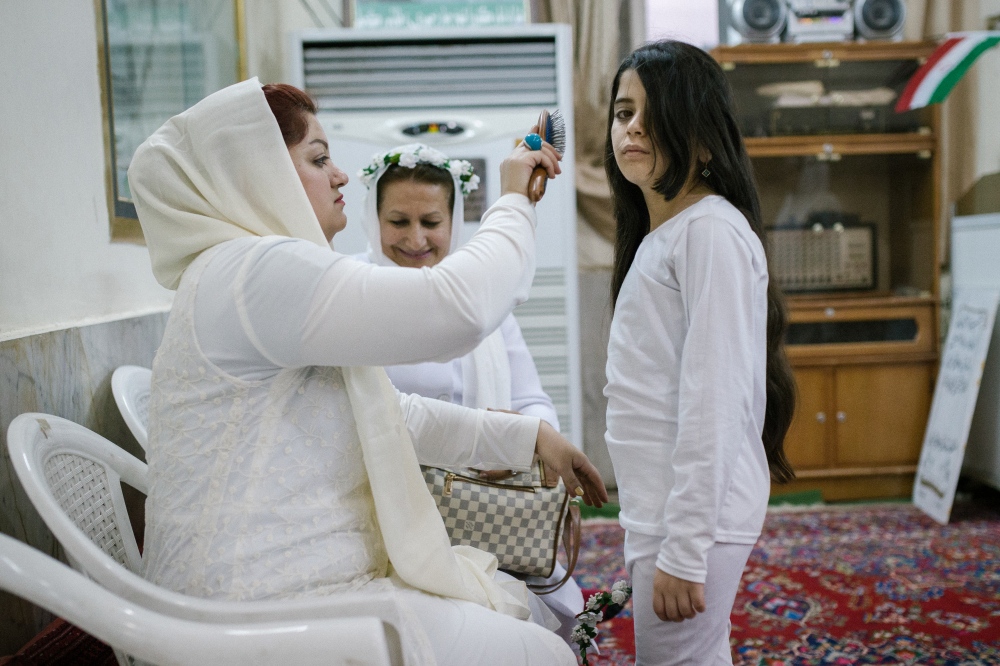 27 of 35 © 2021 Solmaz Daryani
The Mandaeans are not recognized as a discrete group in the Islamic Republic's constitution and are not accorded the representation in parliament as others minorities are. They face varying challenges of discrimination in education and employment. Many of the younger Mandaeans are looking for opportunities abroad, but there are just as many who would prefer to stay. Ahvaz, Iran.2016 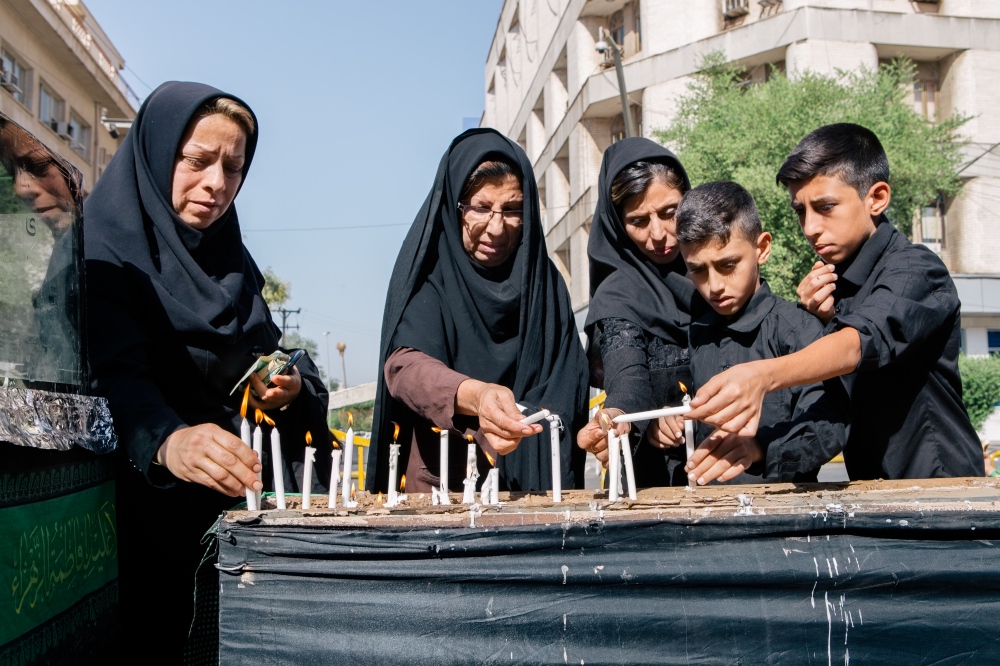 28 of 35 © 2021 Solmaz Daryani
Muslims light candles in front of the Mandaean house On the day of Ashura (the tenth day of Muharram in the calendar. Commemorates the death of Hussain ibn Ali). To respect Muslims, Mandaean refuse to go out with white clothing. Ahvaz, Iran.2016. 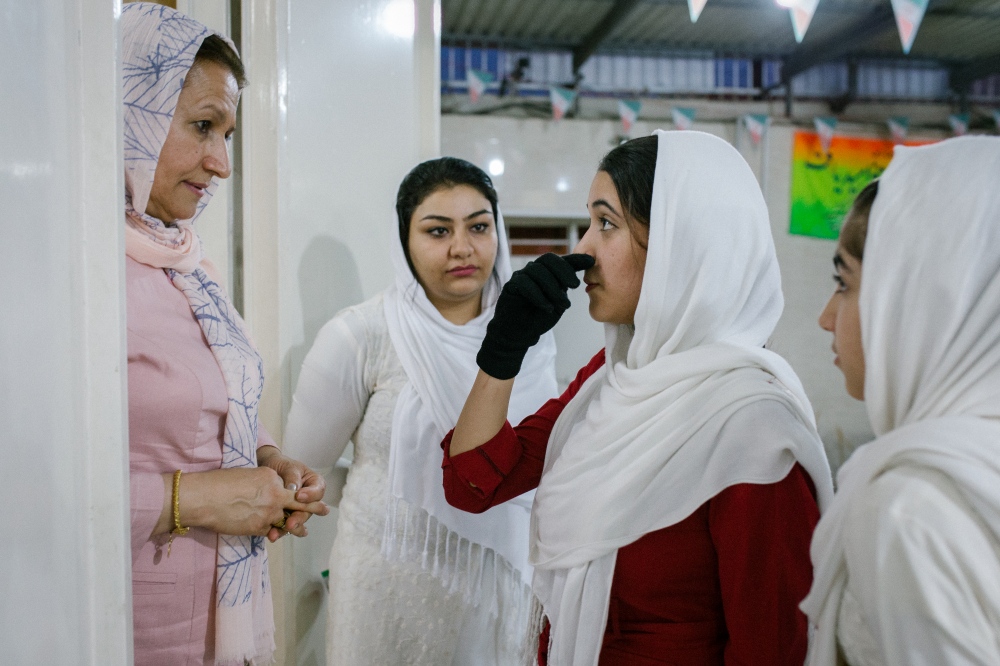 29 of 35 © 2021 Solmaz Daryani
Ms. Khafaji, administrator of the mandi in Ahvaz, where Iran’s Mandaeans go to worship. She stands partially obscured by a doorway of the mandi, where she reprimands a young woman for wearing red on Ashura, a major religious holiday of mourning for Shia Muslims, who typically wear black in honor of the day. 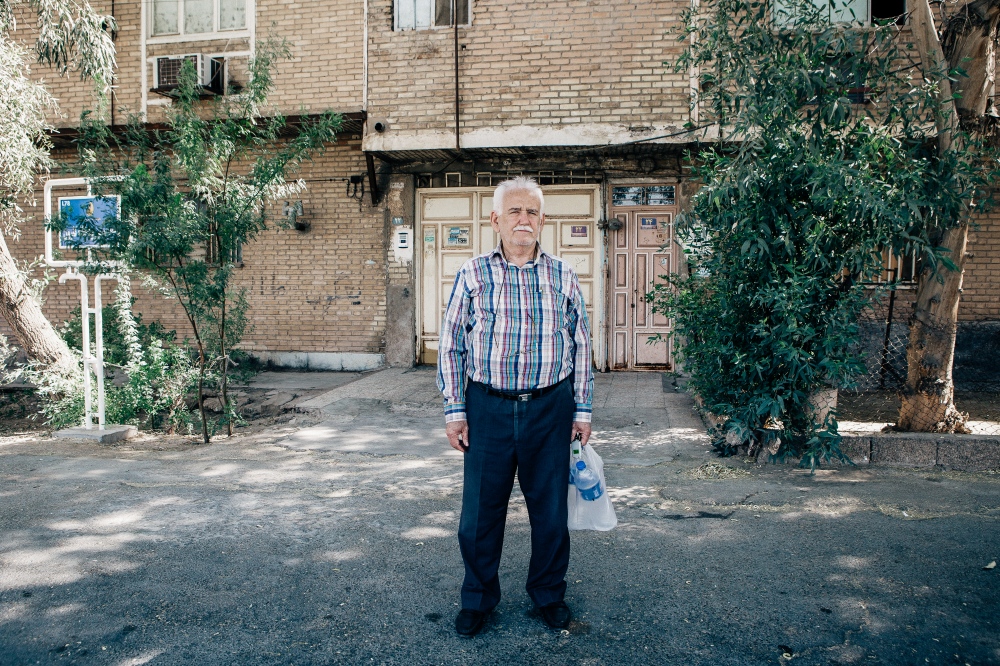 30 of 35 © 2021 Solmaz Daryani
Mr.Zahrooni, A Mandean retired teacher stands in front of his house. he says: “Even some barbers do not cut our hair,”.One barber, he encountered reserved a special set of shaving equipment and clippers to use on members of the religious minority group. “I ask him why he uses a different set of equipment…When a Muslim customer comes, he says, ‘You see, I use a different set of equipment for Mandaeans and I even wash my hands afterward.”Ahvaz, Iran.2016 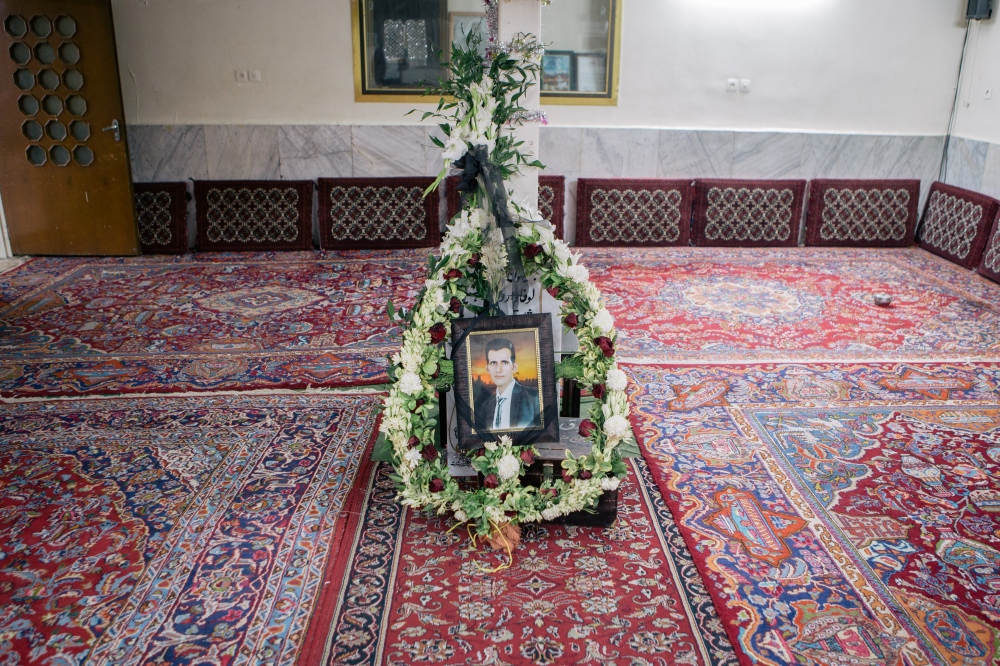 31 of 35 © 2021 Solmaz Daryani
A 30 years old Mandean goldsmith killed in his jewelry by thieves. His funeral and special ceremonies take place in Mandi. His family members said that if police caught the thieves the sentence of the court for Christians will not be the same as the Muslims, and the laws are being discriminated against Mandean community.Ahvaz, Iran.2016 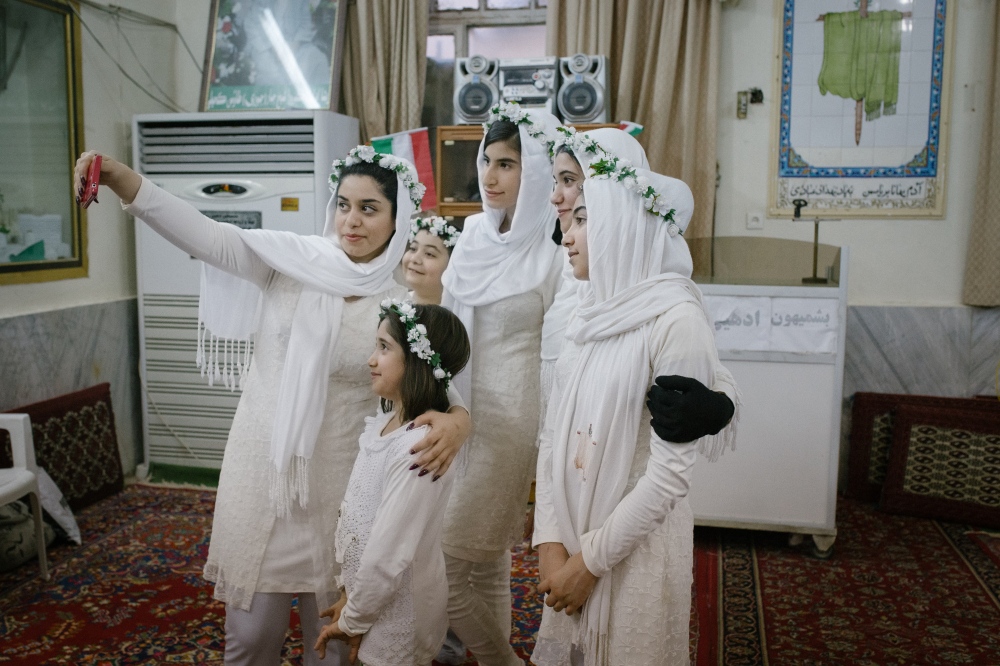 34 of 35 © 2021 Solmaz Daryani
An Iranian Mandean couple holds twigs from the Yannis tree after their marriage baptizes in the Karun river in Ahvaz. Ahvaz, Iran.2016 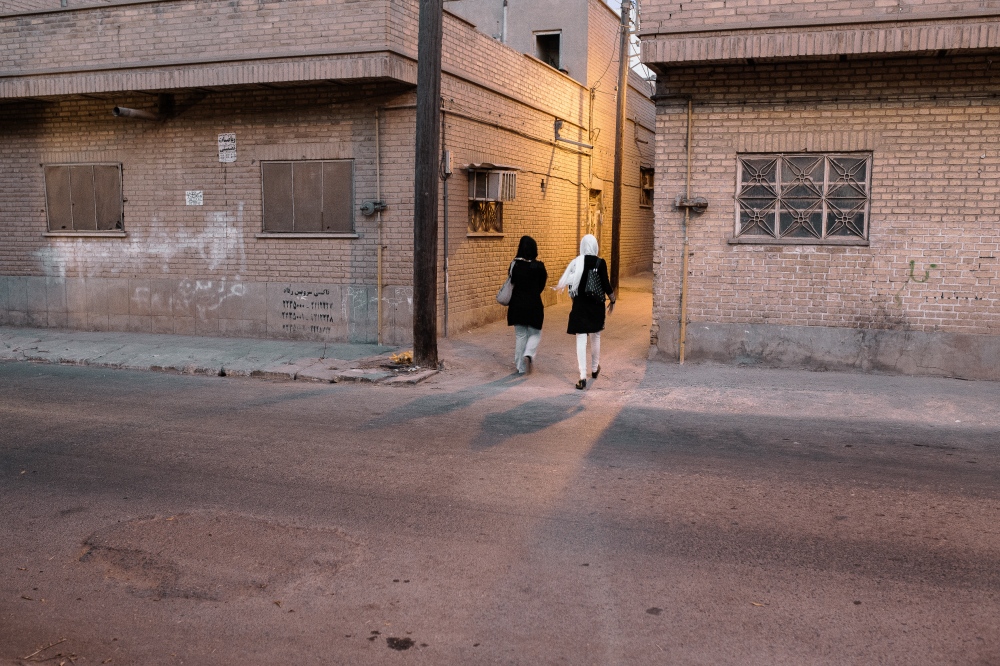 35 of 35 © 2021 Solmaz Daryani
After participating in the religious ceremony, the girls return to their homes. Shahrzad, 17, says, "I was born here and I am used to the life here, so it makes me feel I want to stay in Iran. But I know I can't find a job here so I think I should leave. I know it's no use to get a degree as I can't find a job. I know in another country I can be successful." Many of the younger Mandaeans are looking for opportunities abroad, but there are just as many who would prefer to stay. Ahvaz, Iran.2016
Public Story
A SACRED, SULLIED SPACE
Copyright solmaz daryani 2021
Date of Work 12/31/69 - Ongoing
Updated 12/12/18
Location Ahvaz,Iran
Archived as Climate Change, Community, Discrimination, Documentary, Editorial, Environment, Essays, Fear, Freedom, Historical, Immigration, Lifestyle, Migration, Minority, Photography, Photojournalism, Portraiture, Religion, Water

In Iran, their numbers are estimated to be somewhere between 5,000 and 10,000, though no census count exists. Not officially recognized by Iran’s constitution, they lack opportunities that the Shia Muslim majority is afforded. the Mandaeans suffer varying degrees of discrimination in education and employment.

Throughout a journey into the Mandaeans' world and everyday lives and practices, this story explores the untold dimensions of being an ethnoreligious minority in Ahvaz, in southwestern Iran. The Mandaeans believe that natural flowing waters are pure, sacred, and life-giving, despite this, the Karun River, in which they practice their religious rituals, is becoming ever more polluted. They baptize in the Karun, imbibe it during religious ceremonies.

The sacred yet sullied river blurs the boundaries of the long-existing dichotomy of the sacredness of religiosity and profanity of contamination, as the Mandaeans are occasionally and arbitrarily labeled as Najis, ritually unclean, by the Muslim community of Ahvaz. This twofold tension between the Mandaeans' imagery of the purity of the Karun River and the Muslim community's image of Mandaeans as ritually unclean as well as the reality of the pollution of the Karun river shape the story.

THE EYES OF EARTH (THE DEATH OF LAKE URMIA 2014-ONGOING)

By Solmaz Daryani / Iran East-Azebaijan Urmia Lake — The Eyes Of Earth "A lake is earth's eye; looking into which the beholder measures the depth of..
Sep 10, 2020

IN THE DESERT OF WETLANDS

By Solmaz Daryani / iran — My homeland, Iran, is mainly suffering from water scarcity and socioeconomic drought, where, water..
Mar 11, 2020