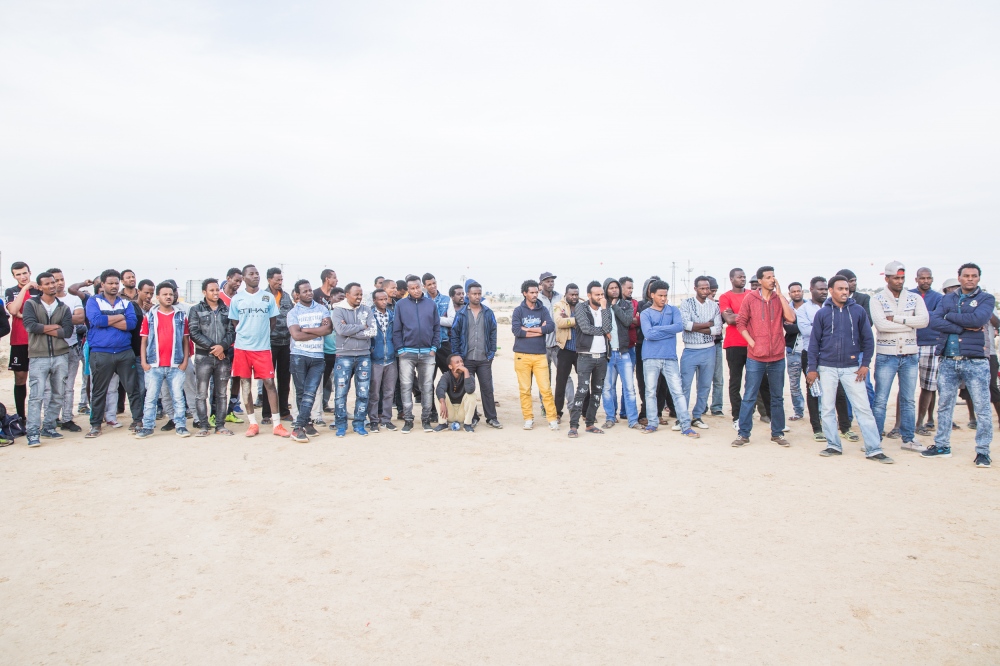 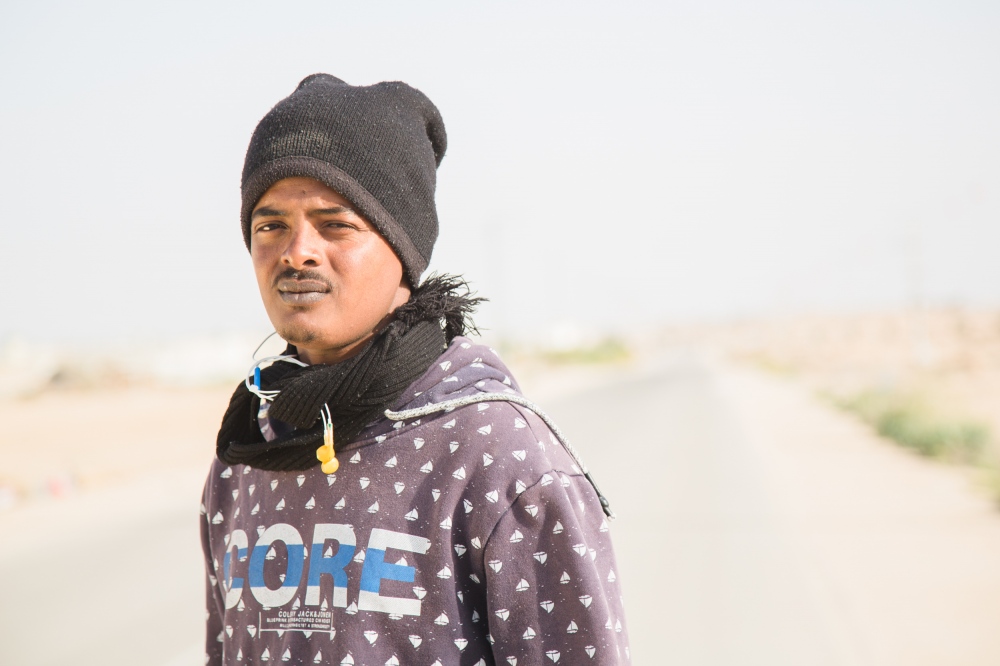 Andit escaped from Eritrea at the age of sixteen. The first escape to Sudan failed, the Eritrean government found him and threw him into prison. "I would have rather died than stayed there – so I took the risk again. The second time however, I risked a life sentence." On his second escape, he was sold by Sudanese soldiers to Eritrean Arabs, who only set him free for a high ransom. After a long journey, Bedouins in Sinai then extorted another 3,500 US dollars from him. Finally, in April 2011, he made it to the Israeli border with thirty-four other refugees, but they were rejected and returned. Egyptian border guards shot with live bullets – only seventeen of them survived. They were then finally let into Israel and put in jail. Andit has been in Israel for six years and since seven months in Holot detention centre. He wants to become a photographer. 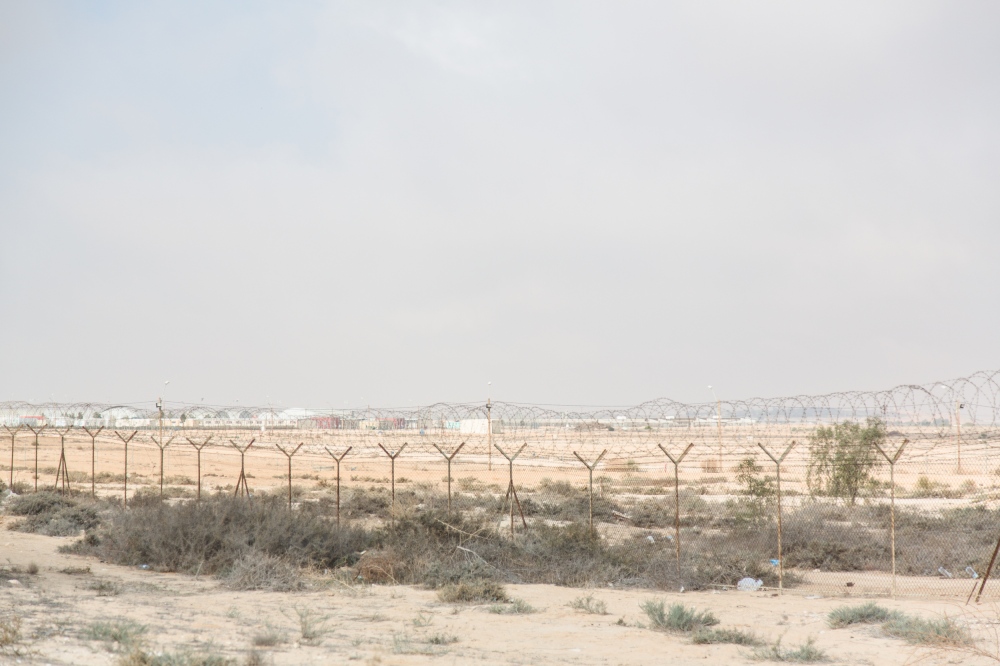 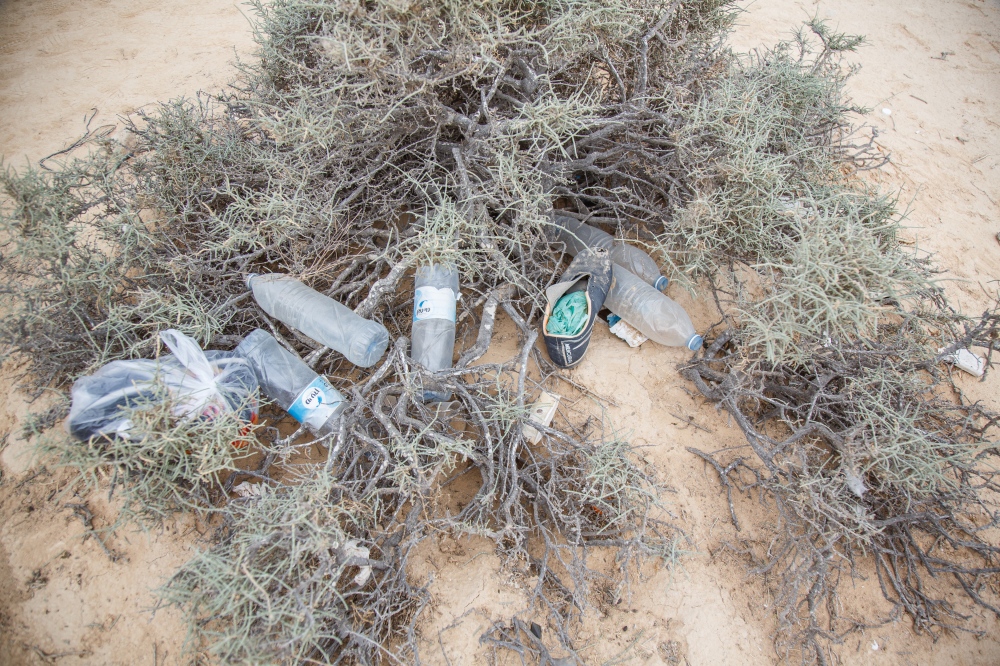 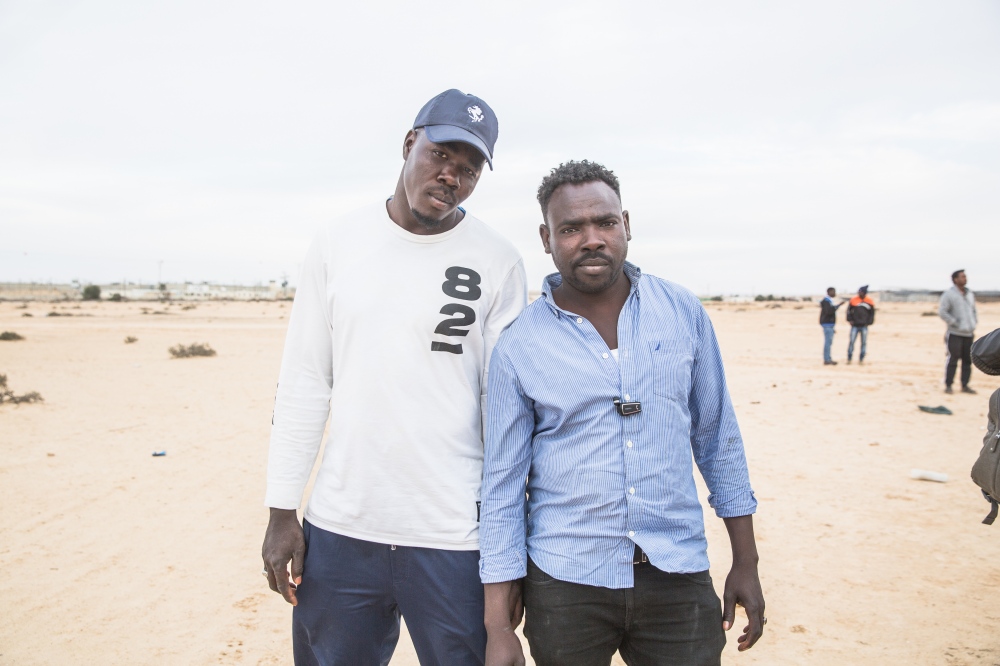 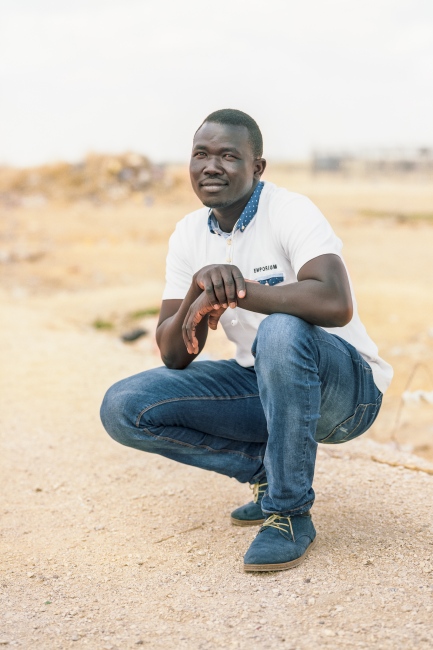 Adam was born in 1987 in the Nuba Mountains of South Kordofan, Sudan. In 1997, he moved to Khartoum with his father to learn Arabic and graduated at the age of sixteen. "Had I become a Muslim, I would have received a passport, but I did not want to." He was then conscripted to do military service. After a year, he was to go to war against South Sudan - against 'his own people'. When he refused, they threatened to kill him and he was imprisoned for three years. In prison he was tortured – he has severe burns on his body and scars of shackles and beatings. In 2005, during peace negotiations between North and South Sudan, he was lucky to be released via a prisoner exchange. He stayed in Khartoum and trained as electrician. Still pressured to become a Muslim, he was again arrested in 2012, this time for six months. He then escaped Sudan and made it to Israel with difficulty. After five years of working in Israel, he has been in Holot for three months now. Israeli authorities are threatening to send him to South Sudan, which is independent now but at war. He hopes for help: "I want to live, not fight." 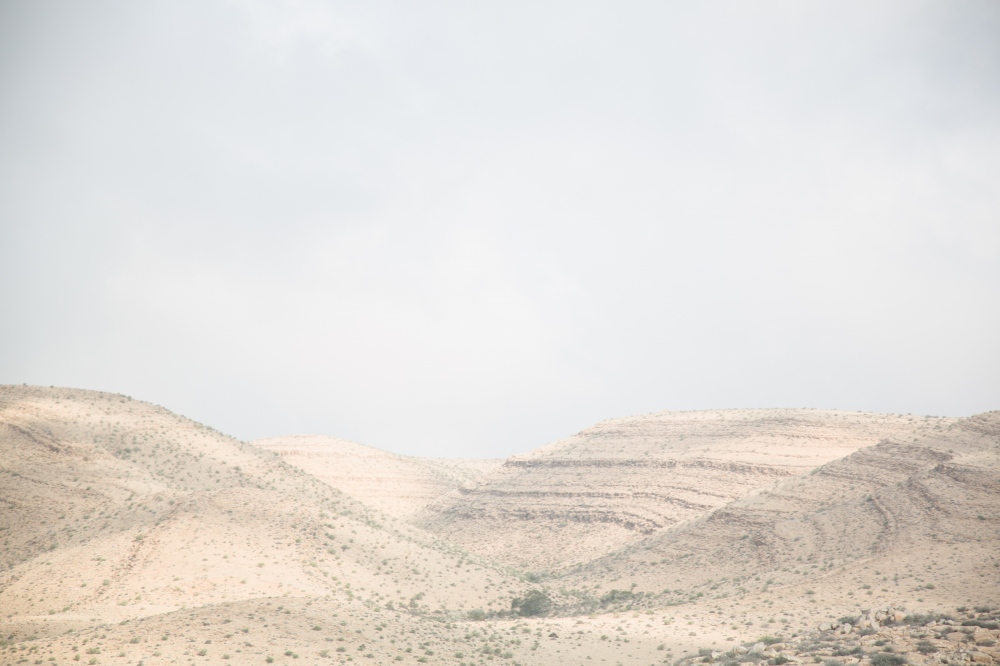 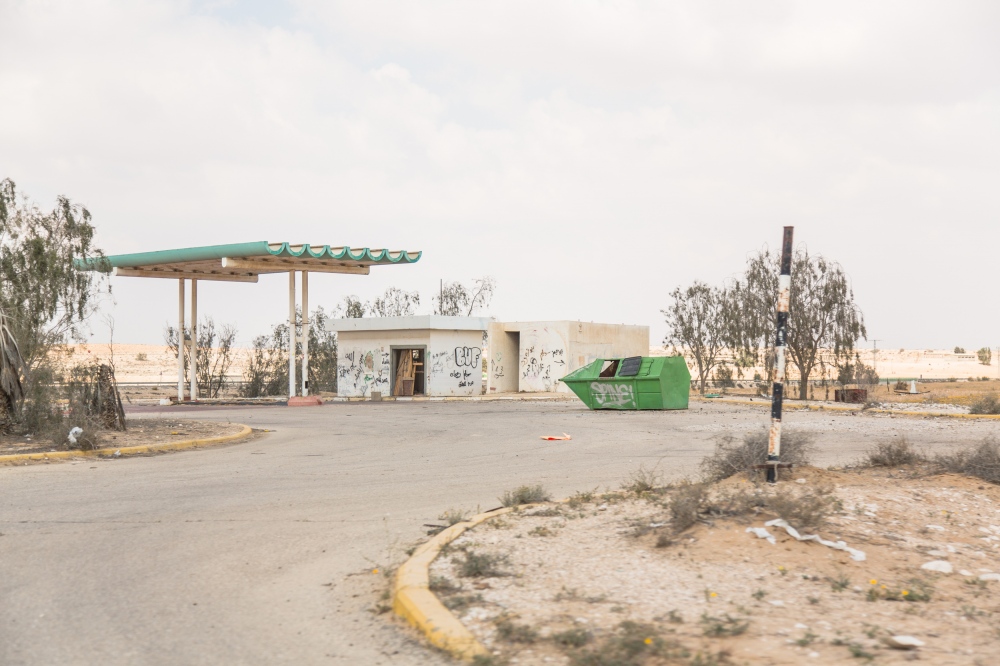 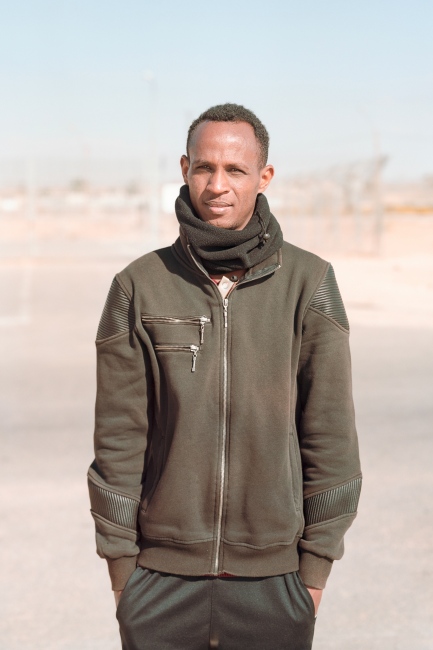 Melake has been in Israel since 2010. He has worked in Ashdod for six years, until he was taken straight from work to detention in Holot. In Eritrea, he had been studying chemistry but feared to fail his exams and thus be forcedly conscripted for military service. It took him a week on foot into Sudan; then another three weeks hitchhiking to get into Sinai in Egypt. The Bedouins who captured him threatened to sell his kidneys, should he not manage to come up with the ransom of 4,800 US dollars. His family sold everything they owned. "If you don't have the money, they will do surgery right there and you die. Unless you have seen it with your own eyes, it is inconceivable." 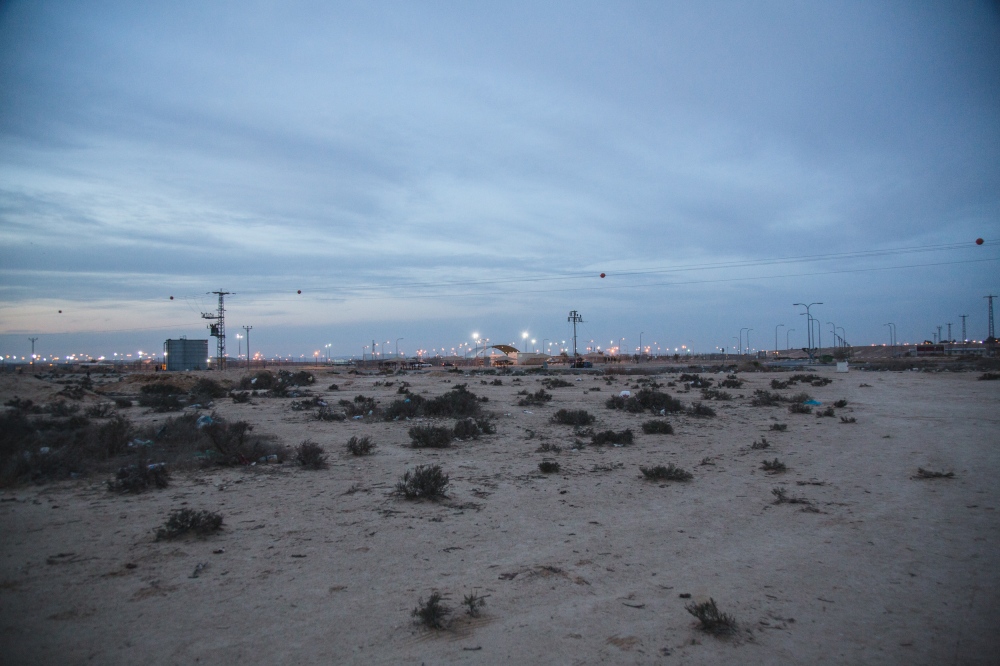 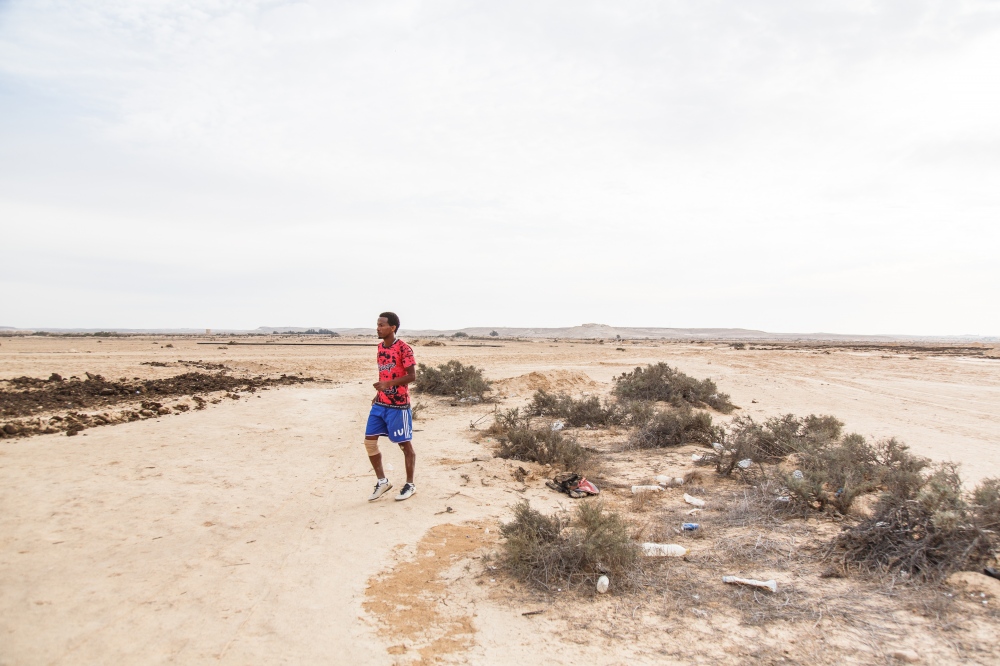 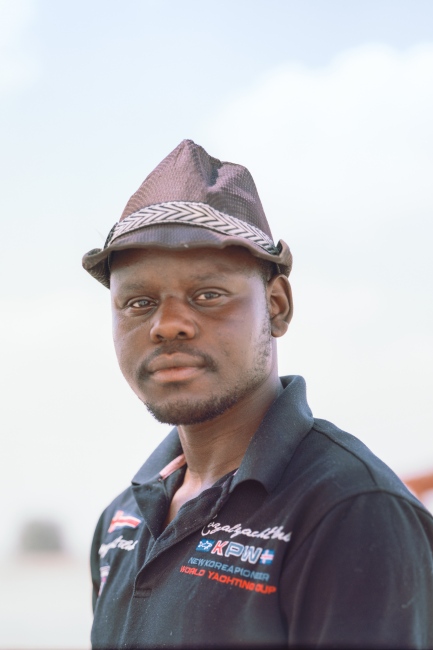 During the genocide, the village of Malian in Darfur was attacked and destroyed by Arab militia. Dolosa was thirteen years old – his grandfather died, he was seriously injured and barely survived. His mother found him half dead. They fled together with his older sister, who lost her baby on the run. The camp where they then lived was dangerous, with frequent shooting and rapes. In 2005, he went to Khartoum, where he worked as a shoe polisher with two friends. Even though English students were suspected of being rebels and persecuted in Sudan since 2008, he was determined to learn the language. In 2011, he was imprisoned for six months - after which he decided to escape. At the age of twenty-three he reached Israel. "We are still not free, we should have rights and be recognized as asylum seekers. What we need is security, health, education, and then we can go back to build our country." His nickname is Cambal - the energetic one. 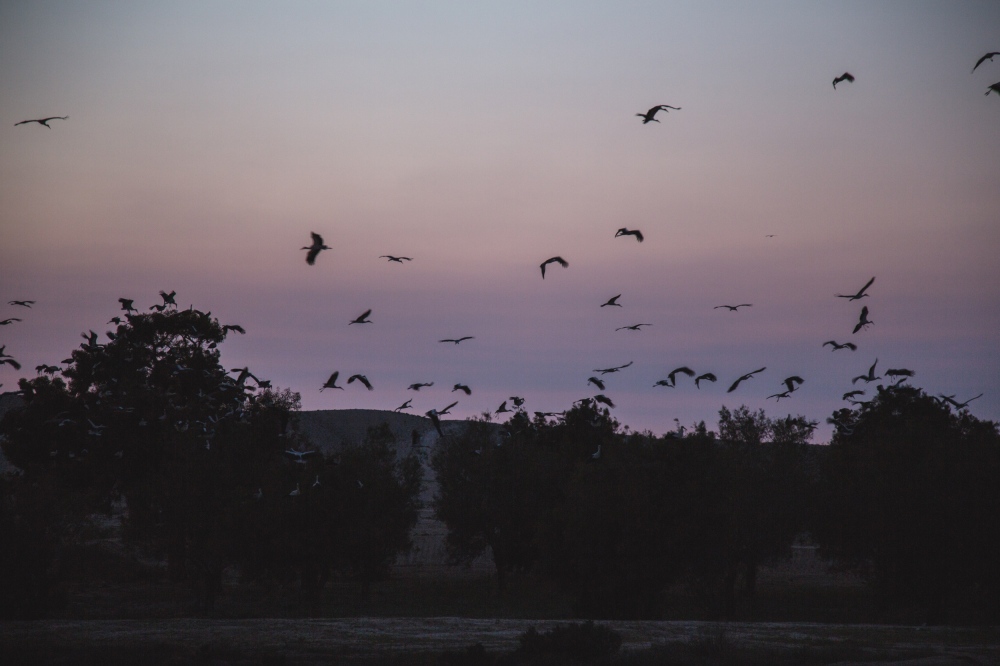 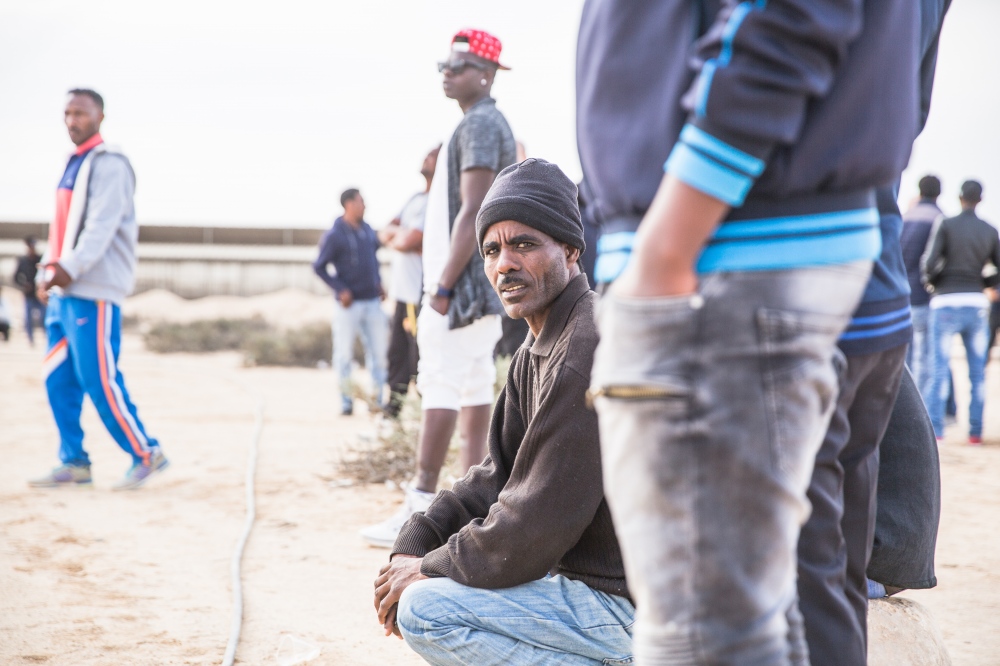 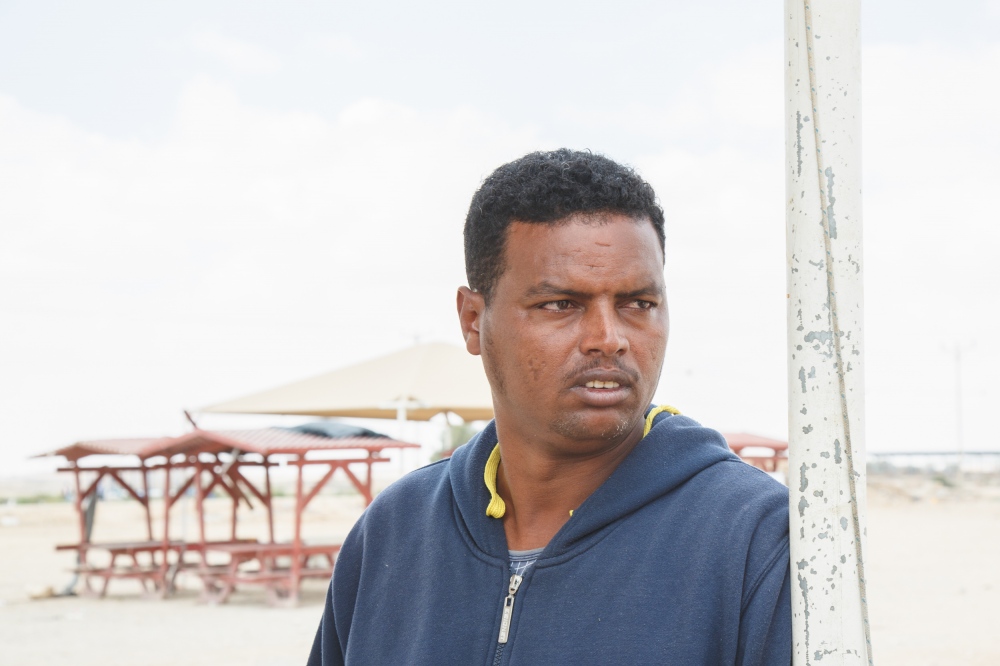 Mtseamlak fled Eritrea for the reason that he was in military service and therefore afraid for his life. Since he could not raise any money for smugglers, he initially stayed in Sudan for ten months. He made it to Israel in 2012 but first came to Saharonim prison in the Negev desert for one and a half years. He then worked near Gaza and now has been in Holot since five months. His wife and children are still in Eritrea. Mtseamlak has not been able to cope well with his escape and the time in Israeli prison: "I am calling for help – and I don't know why it is taking so long." 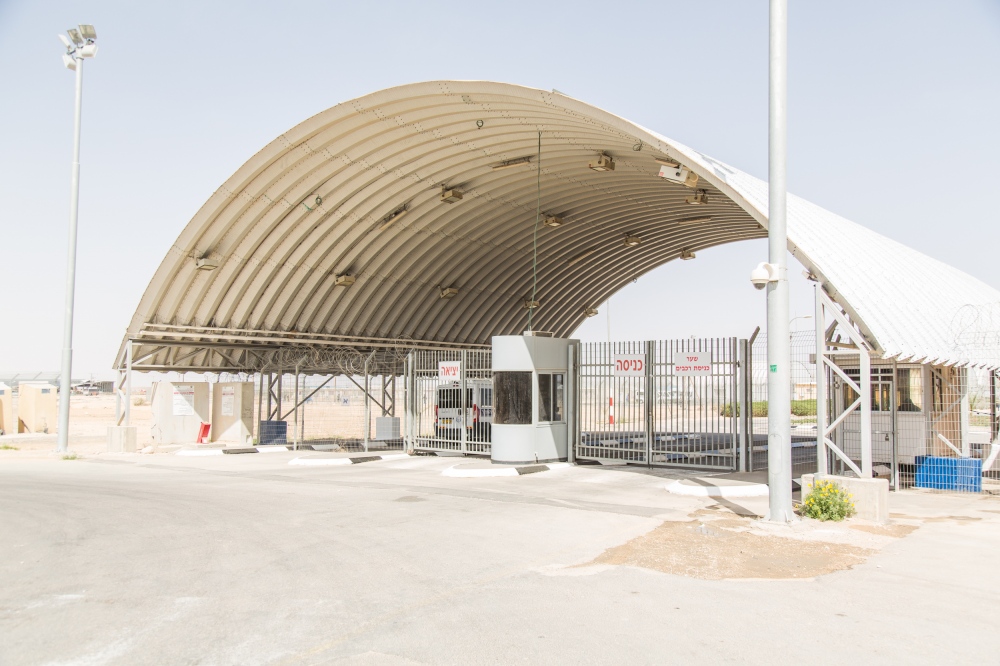 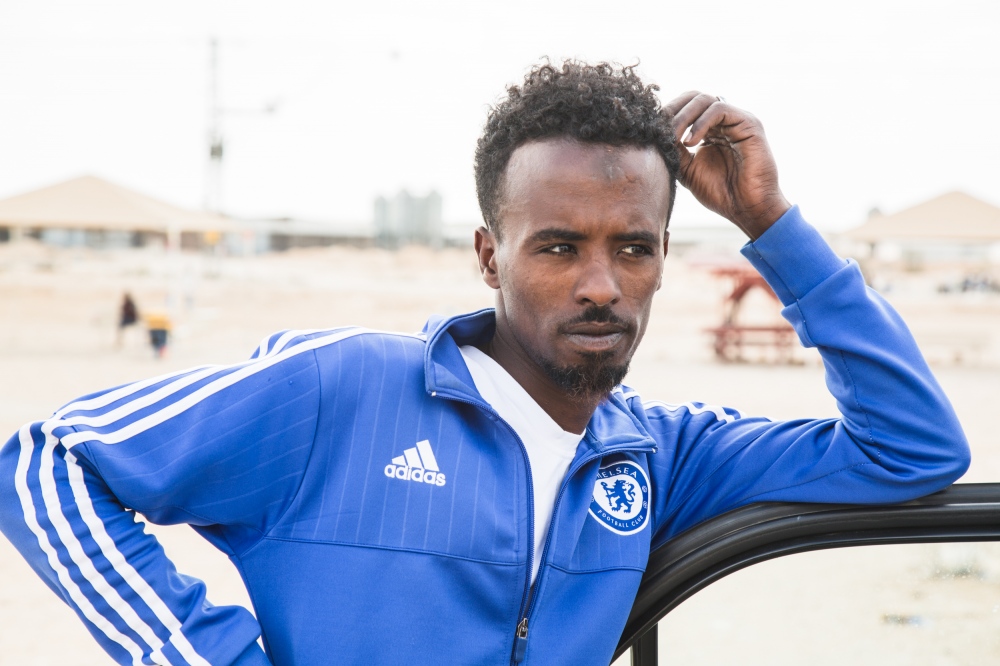 After grade ten, Ramzi understood that he would be drafted for military service after school. He knew then that there was no future for him in Eritrea and he fled to Ethiopia. From there, he had to attempt several times to get into Sudan. Finally, he managed to arrive in Sinai through the Libyan desert. He does not want to talk about his time as a prisoner of Arab Bedouins: "Most horrible things are happening there that I witnessed with my own eyes." He is in Israel since 2010. He thought that Israel was "a peaceful, stable country. People could be themselves and live the way they imagined." Nevertheless he was sent to the detention centre five months ago. "Even though I have learned the language and culture and have never been in trouble." 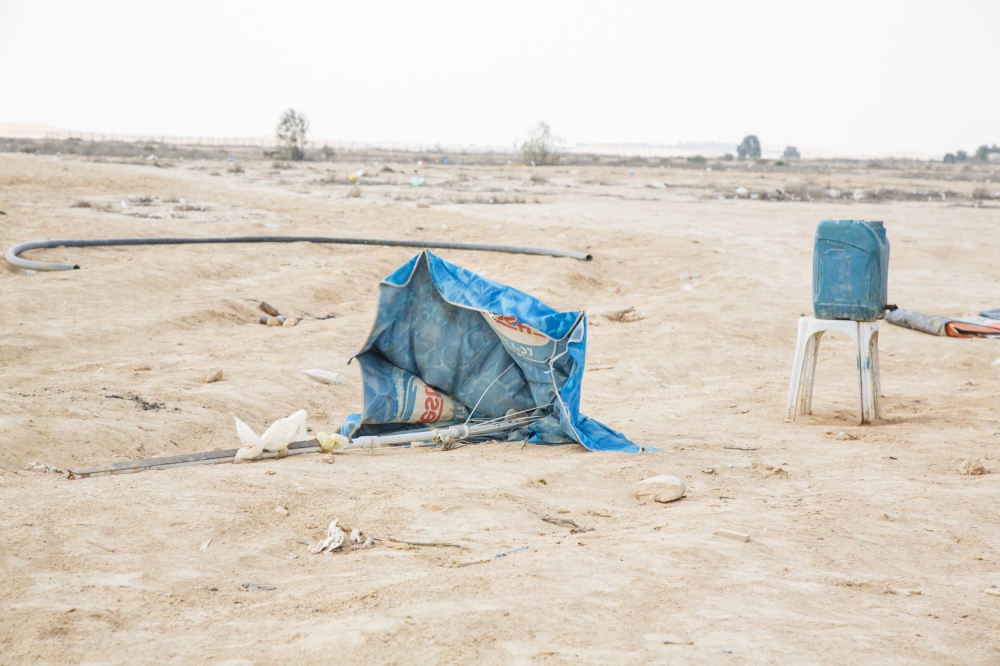 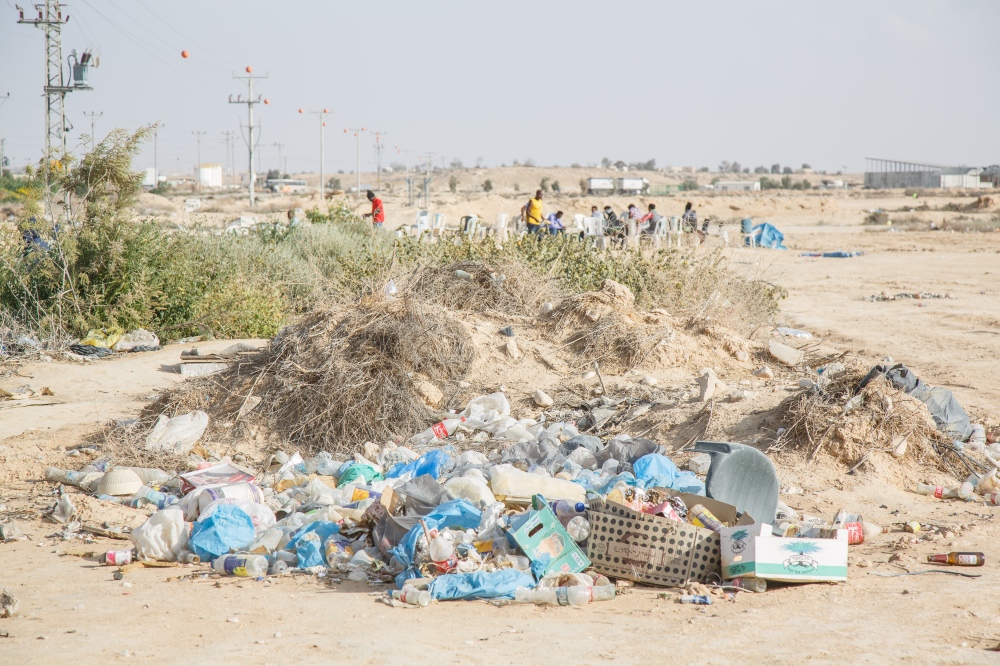 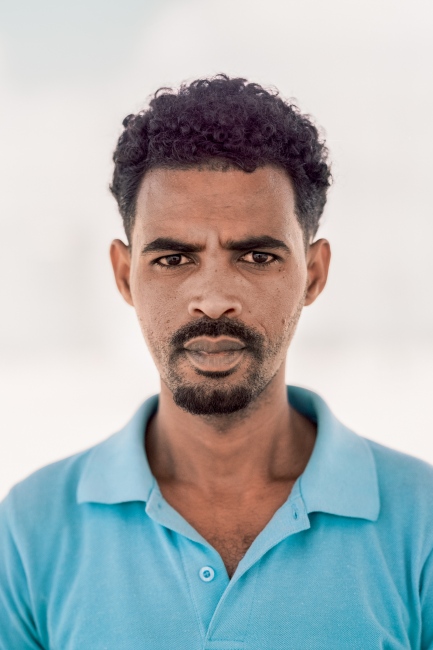 Abraham fled alone from Eritrea and has been in Israel since 2011. It took him two weeks to get into Sudan. In Egypt, he was captured in Sinai and tortured. His Arab kidnappers wanted him to pay a ransom quickly. To extort the money from his family, he was beaten for a week with iron bars, especially on his legs. After seven days, his brother had scraped 5,000 US dollars together, and Abraham was released at eight o'clock in the evening. Heavily injured, he dragged himself through the night towards the Israeli border - the border radar his only guidance in the dark. He first came into an Israeli hospital, then to Saharonim prison. Since then, he has lived with his brother for five years. Now he has been in Holot detention centre since November 2016. 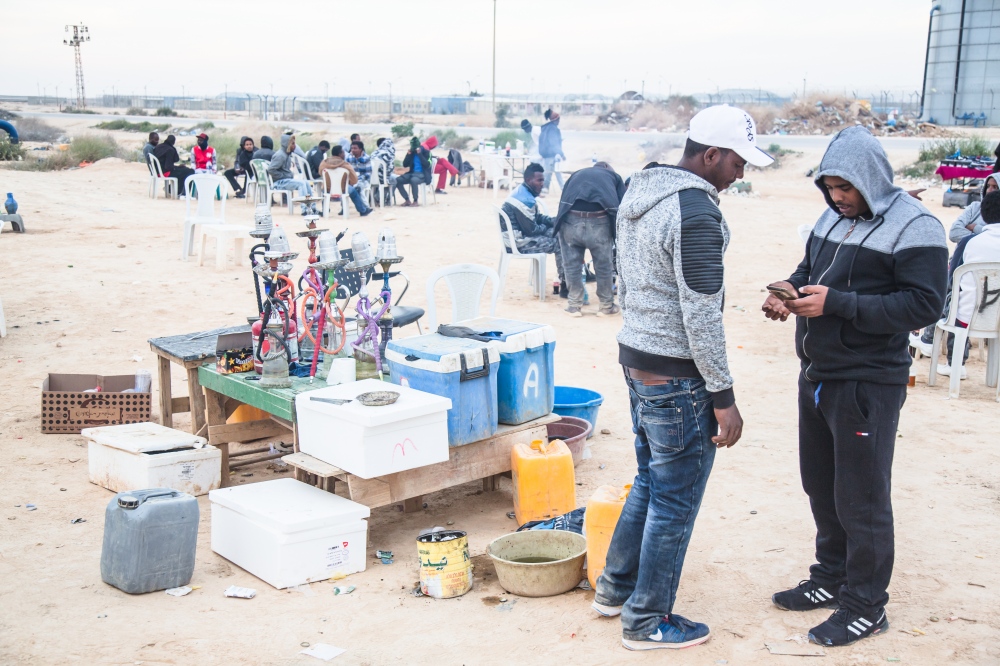 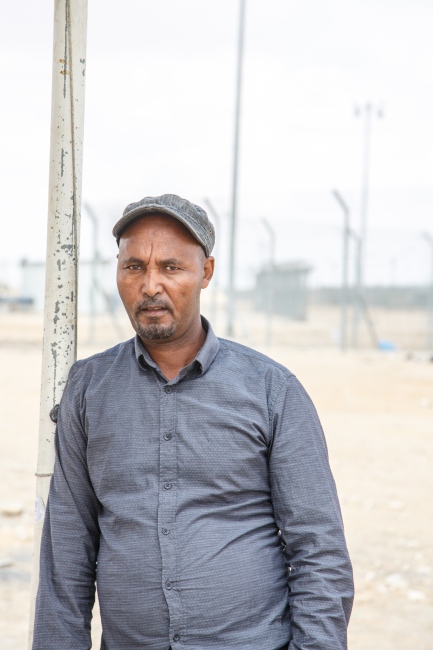 Aged seventeen, Aregay was forced to become a soldier in Eritrea. "You cannot leave the military service. For the smallest thing, you are thrown into one of the underground prisons; nobody comes out alive from there. In Eritrea you have no life – I couldn't even provide for my family." He was wounded in the war with Ethiopia and decided to flee because he was afraid. During his escape, he was captivated, beaten and blackmailed by Egyptian Bedouins. In 2010, he managed to escape to Israel, where he was imprisoned for almost five months. After release he had been working as unskilled labourer. Since October 2016, he has been in Holot. The war wound on his belly is painful, he would need medical help. 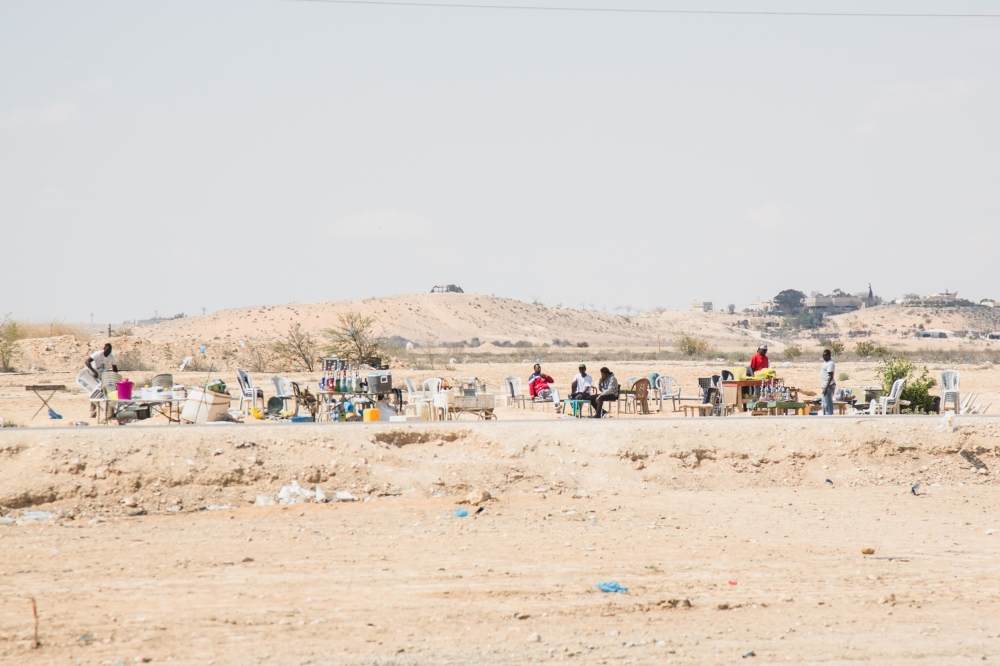 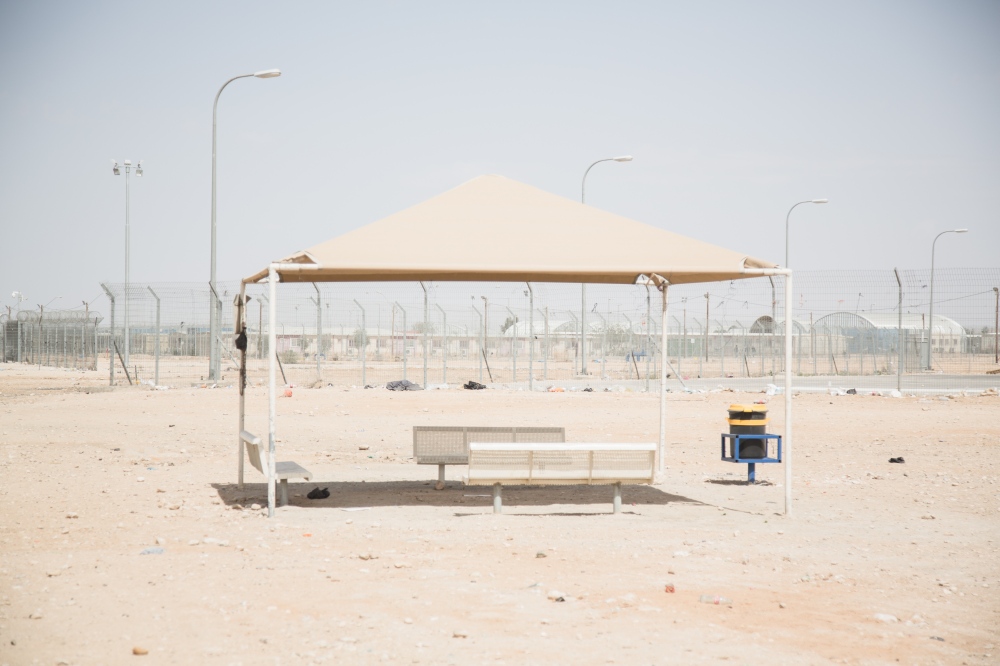 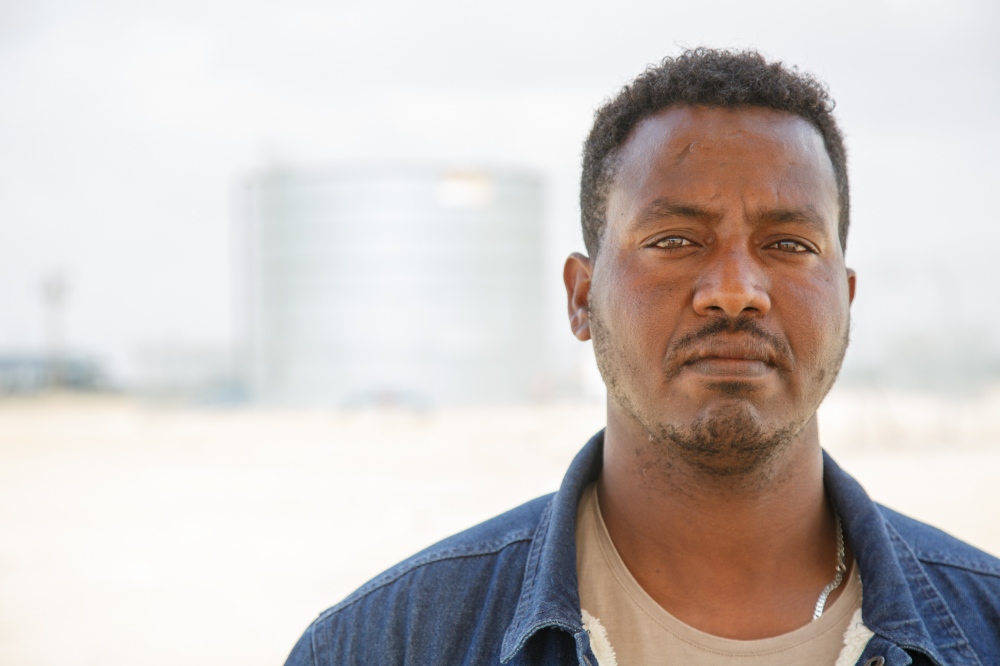 Tsegay Bahta, a water and soil conservation specialist, fled in 2011 from Eritrea after serving seven years in the compulsory national service. After a risky escape he was kidnapped in Egypt and only released for 3,400 US dollars ransom – while many other captives died under the criminals' control. His wife Merhit, who fled after him, was enslaved in Libya for a year by terrorist militia ISIS until she was able to escape from captivity. Their four children are still in Eritrea with the grandparents. In Israel he was first sent to prison and then worked in construction until he had to come to Holot detention centre. "I need protection here – but if I could safely live with my family at home, I would not stay a minute. Yet the Israelis had a similar story like us Africans." 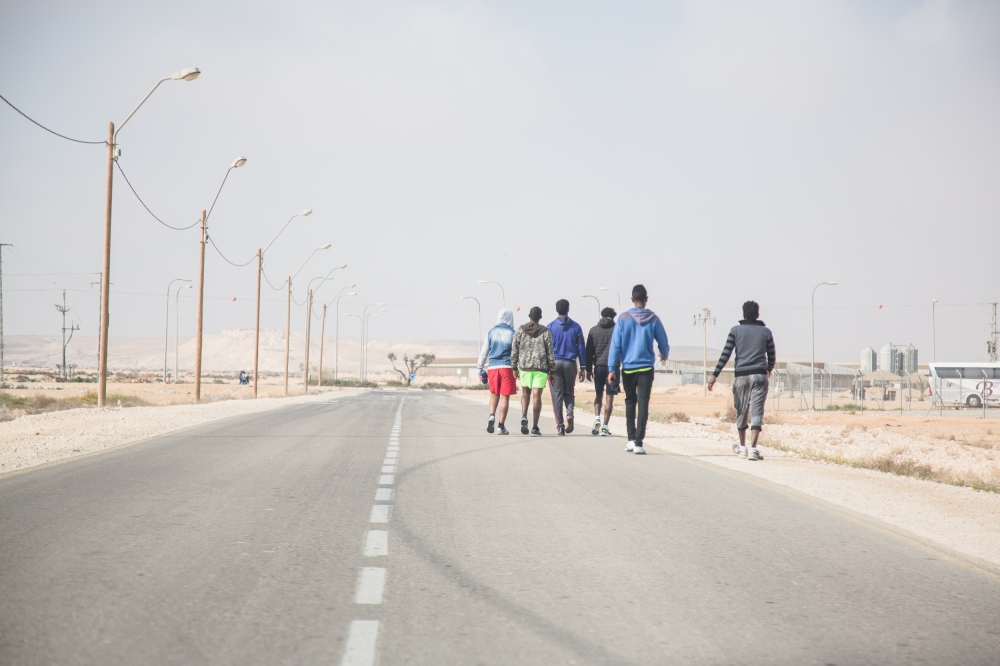 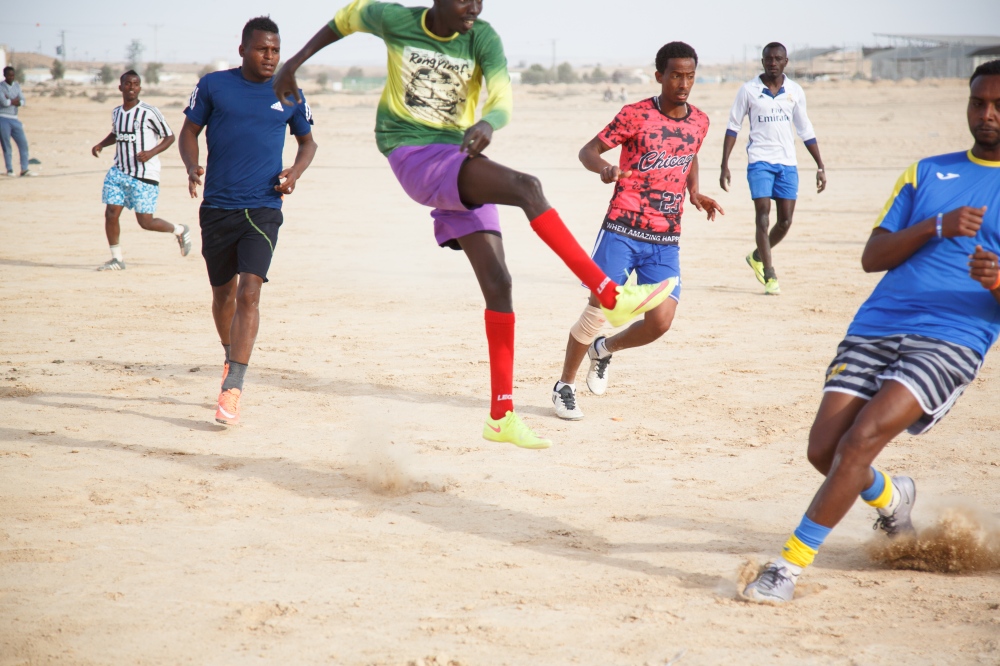 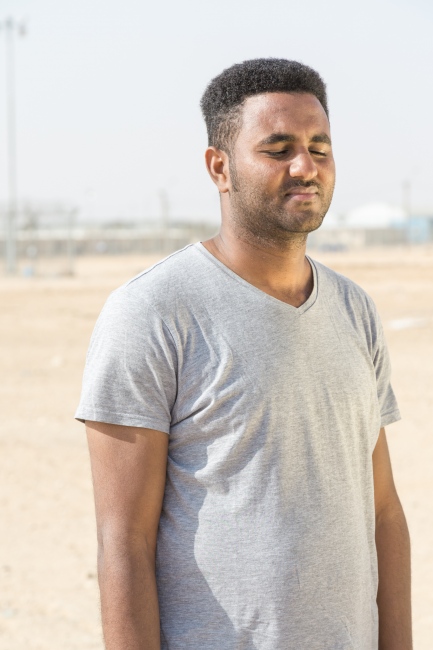 Bereket is an agricultural scientist, but was deployed as a teacher in Eritrea. In 2012 he started
his escape from Eritrea to Sudan, then to Egypt. In Sinai, he was kidnapped by Rashaida Bedouins and came free only after twenty-eight days and after paying a ransom of 2,500 US dollars. At the Israeli border, he and other refugees were shot at by Egyptian soldiers, but he could escape and save himself over the fence to Israel. First he came to prison. Since October
2016 he is in Holot detention centre. Bereket is an activist in the Eritrean resistance movement.
"I have been in the opposition in Eritrea, struggling for my rights, for my freedom, for justice.
They did not let me live my life." After giving a TV interview to broadcaster Al-Jazeera two
months ago, his brother was abducted by police in Eritrea. No one has ever heard of him since.

Outcast - in collaboration with Dafna Gazit

Some 45,000 Africans who fled war in South Sudan, genocide in Darfur and military dictatorship in Eritrea have sought shelter in Israel. They had to make a dangerous journey through Sudan and the dangerous Sinai Peninsula in Egypt - but Israel does not grant these refugees asylum.

Instead, under the "Anti-Infiltration Act", all male African migrants are confined for twelve months in Holot camp in the southern Negev desert. There they are being pressured to accept voluntary deportation to their home country or a 'safe third country' like Uganda or Rwanda. More than 3,000 Africans are held in Holot, in an open detention camp. The prisoners are allowed to go out into the desert, but if they miss the check-ins or do not return overnight, they are jailed in the neighbouring Saharonim prison. Holot is a kind of 'no man's land' that is intended to break the will of the detainees – in order to accept their voluntary deportation.

The strategy that Israel is applying is also spreading in Europe. In an attempt to prevent political crises and bypassing the UN refugee convention, governments have begun to deport 'unwanted' people into places where they are illegal or in danger. Refugees fleeing from war and oppression find themselves exposed to insecurity and exploitation instead of finding safety and security. Israel’s dealings with African migrants showcase what a closed-door refugee policy is heading for.

By Nathalie Bertrams — The Forgotten People An estimated 450.000 stateless Palestinians live in Lebanon, descendants of the refugees who were seeking shelter from the..
Dec 7, 2018

By Nathalie Bertrams — The Guests, Turkey Turkey hosts more than 2.5 million Syrians displaced by the ongoing war in the neighbouring state, more than any other country...
Dec 7, 2018

By Nathalie Bertrams — The village of Aweday near Harar in Southeastern Ethiopia is at the heart of the Ethiopian khat trade (or qat (Yemen), miraa (Kenya), marungi..
Feb 28, 2018

By Nathalie Bertrams — Die Kas – Namakwaland, South Africa Die Kas – Afrikaans for ‘the closet’ – is the nickname of the poor part of Okiep, a small town in the..
Oct 6, 2017

By Nathalie Bertrams — Naija, you dey kolo (Nigeria, you are crazy) The photo series travels to Abuja to find images resonating like memories between the urban centre..
Sep 25, 2017

The Sangomas of Mthatha

By Nathalie Bertrams — AH DALIBANDLA The Sangomas of Southern Africa are the traditional healers, the respected guardians of knowledge and traditional African medicine...
Jul 18, 2017