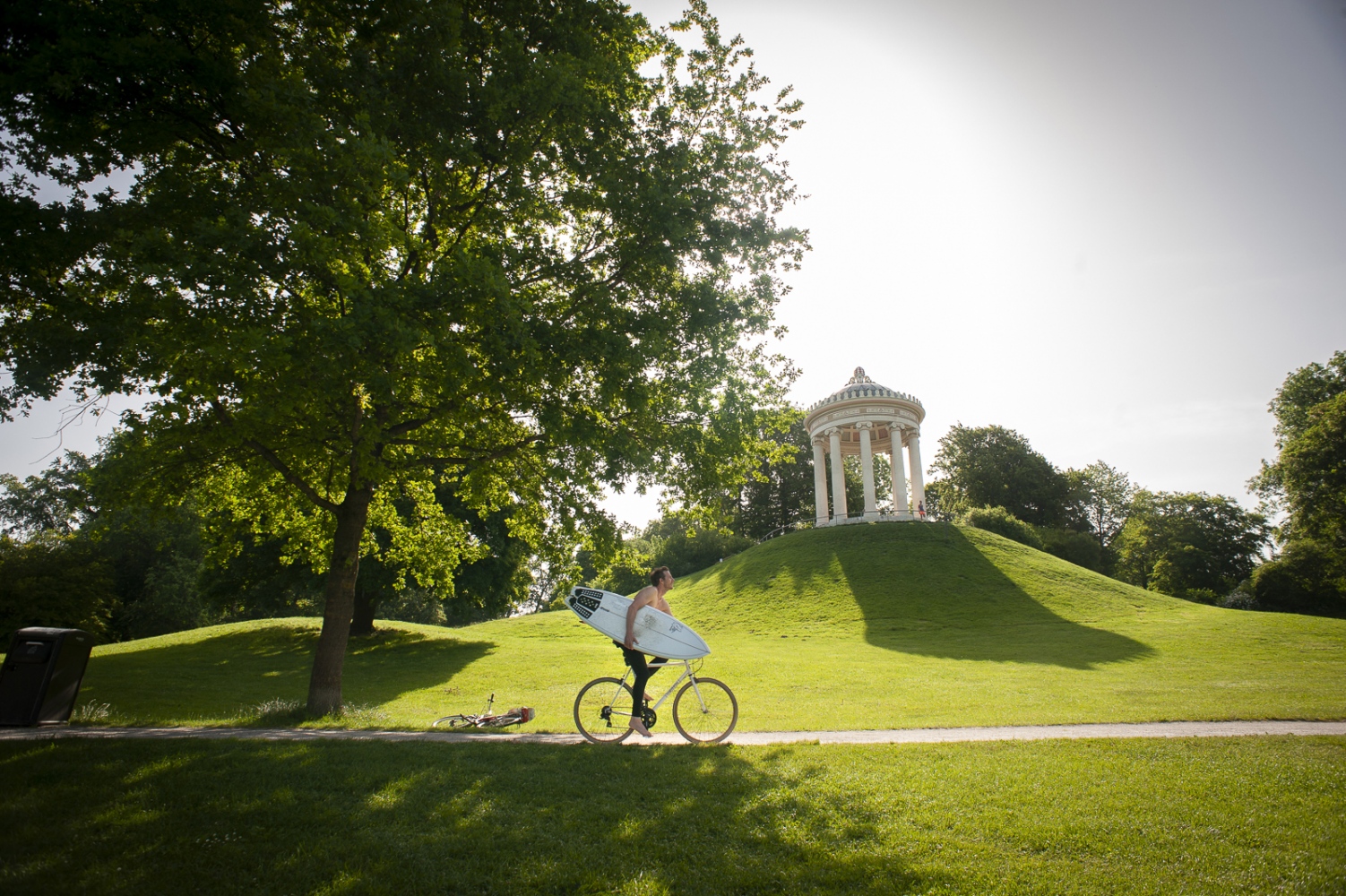 1 of 15 © 2021 Craig Stennett
Quirin Rohleder cycling through the English Garden public park in Munich heading for a morning‘s surf at the Eisbachwelle, the citys standing river wave in a man made tributary from the Isar River. Rohleder started surfing the Eisbach at the age of 13. He is one of Munich‘s most experienced and accomplished surfers. Together with collegue and fellow surfer Christian Bach, he has established the Rapid Surf League in Munich. This year they have held competitions for male and female surfers in Cologne, Munich and later this year Bratislava. 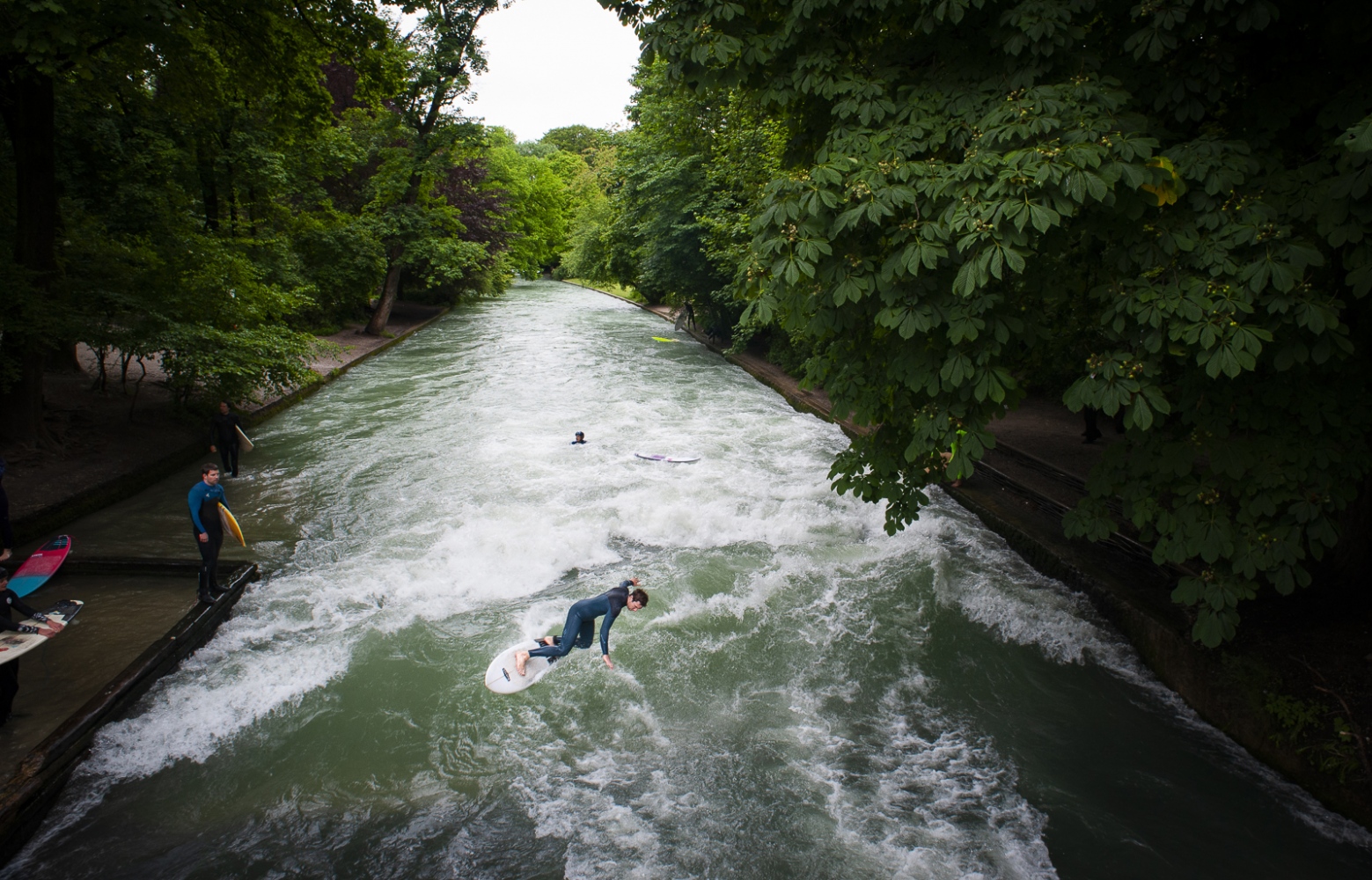 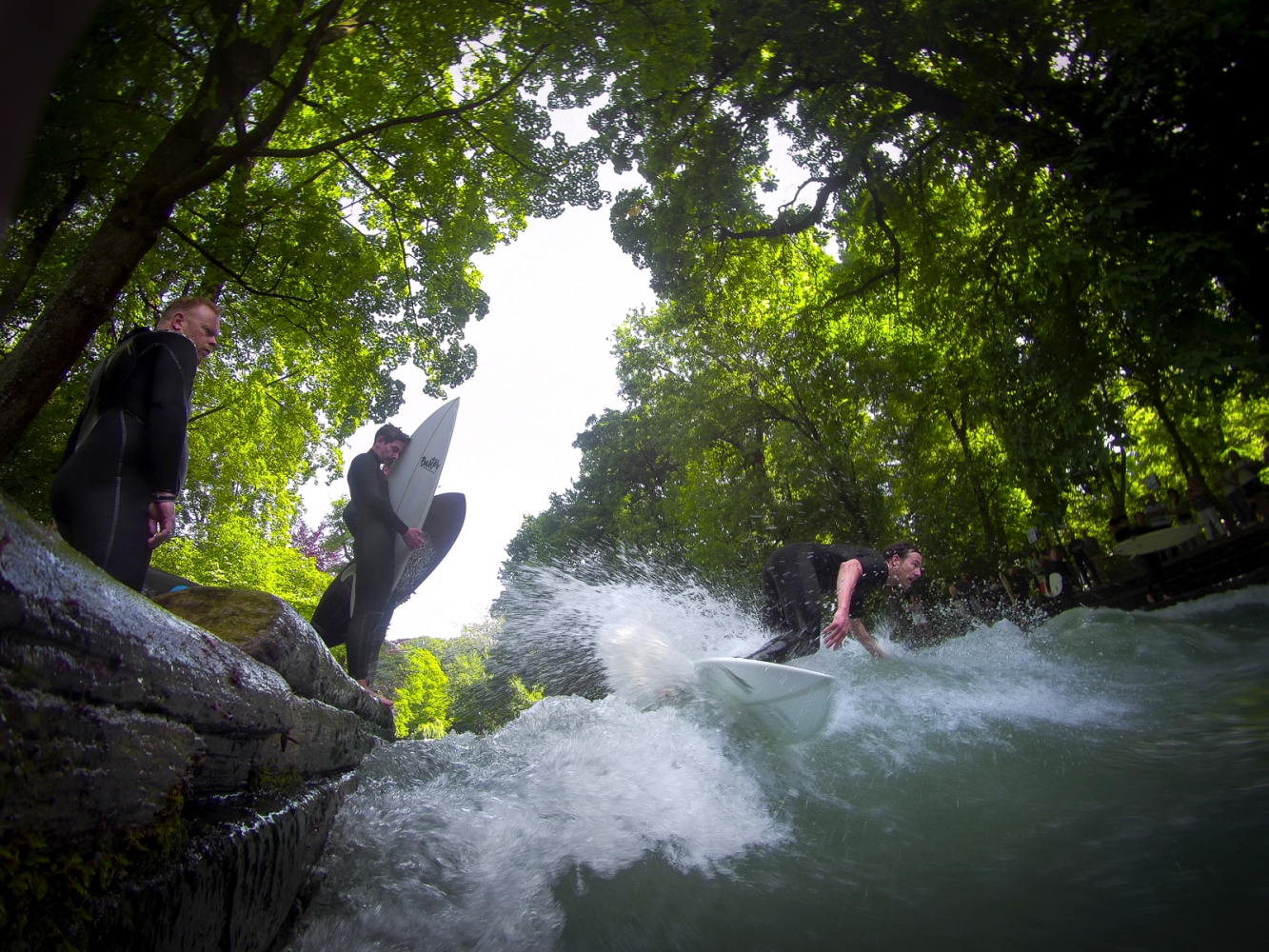 3 of 15 © 2021 Craig Stennett
In the center of Europe some 400 miles from the North Sea and 200 from the Adriatic is the home of a  most unusual surfing destination: the Eisbach (Ice Brook) in Munich, Bavaria, Germany. The Eisbach is a 2 kilometer man made river running through Munich‘s Englischer Garten (English Garden, a public park) and it is the hub of the land locked city’s surf scene. It is situated beneath a bridge just past the Haus der Kunst on Prinzregentenstrasse. The river forms a standing wave called the Eisbachwelle (Ice Brook Wave). Aided and adapted by introducing submerged wooden planks, local surfer‘s have enhanced the flow of the river‘s current to produce the wave. Surfed since the early 1970’s, the City of Munich now fields some 2000 full time surfers coming from diverse economic, age and social backgrounds. Pictured is Quirin Rohleder co-founder of the Rapid Surf League. 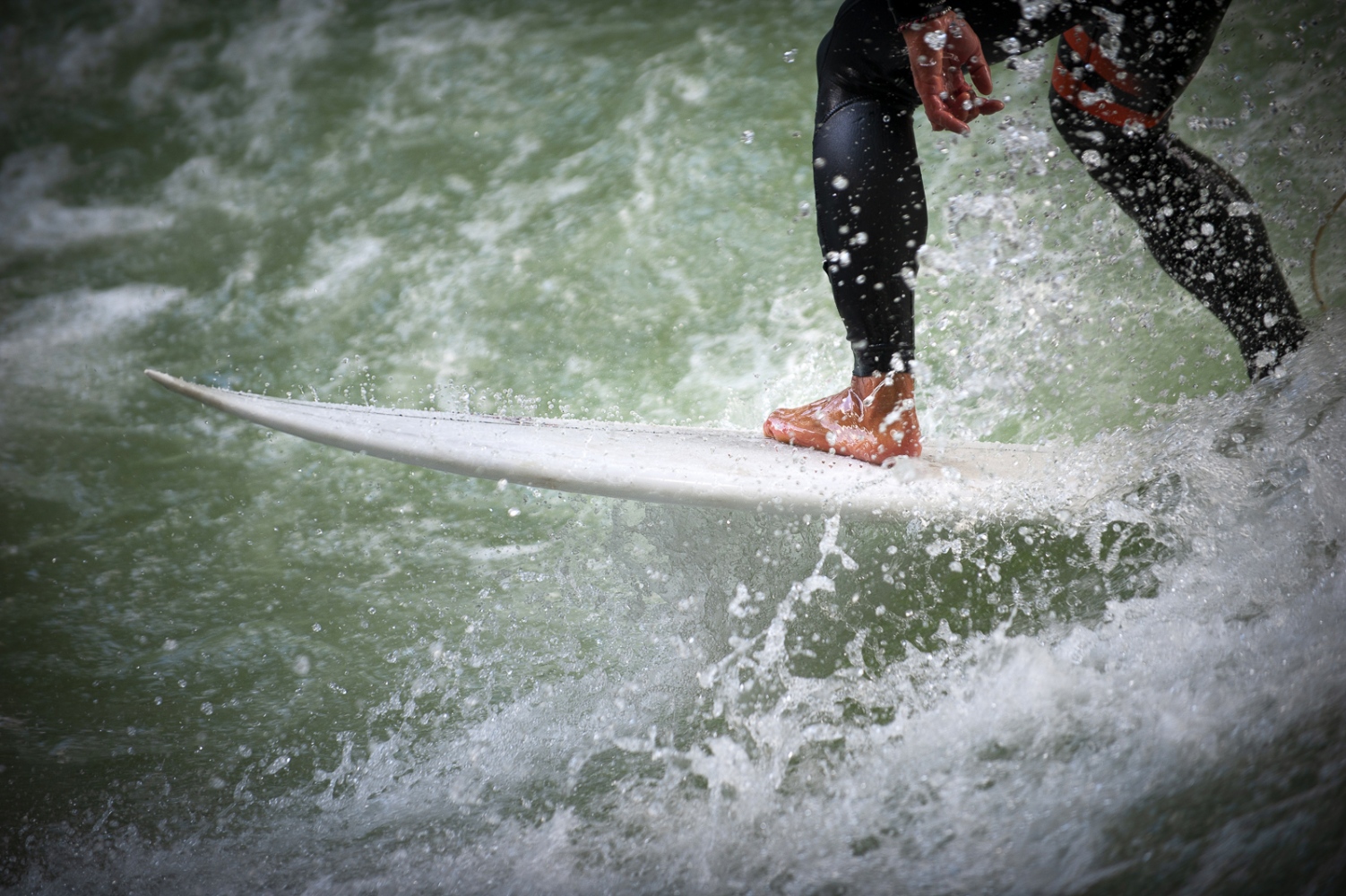 4 of 15 © 2021 Craig Stennett
You have to be experienced to surf the Eisbach successfully. A forcefull current and numerous submerged rocks to crash the wave take no prisoners. 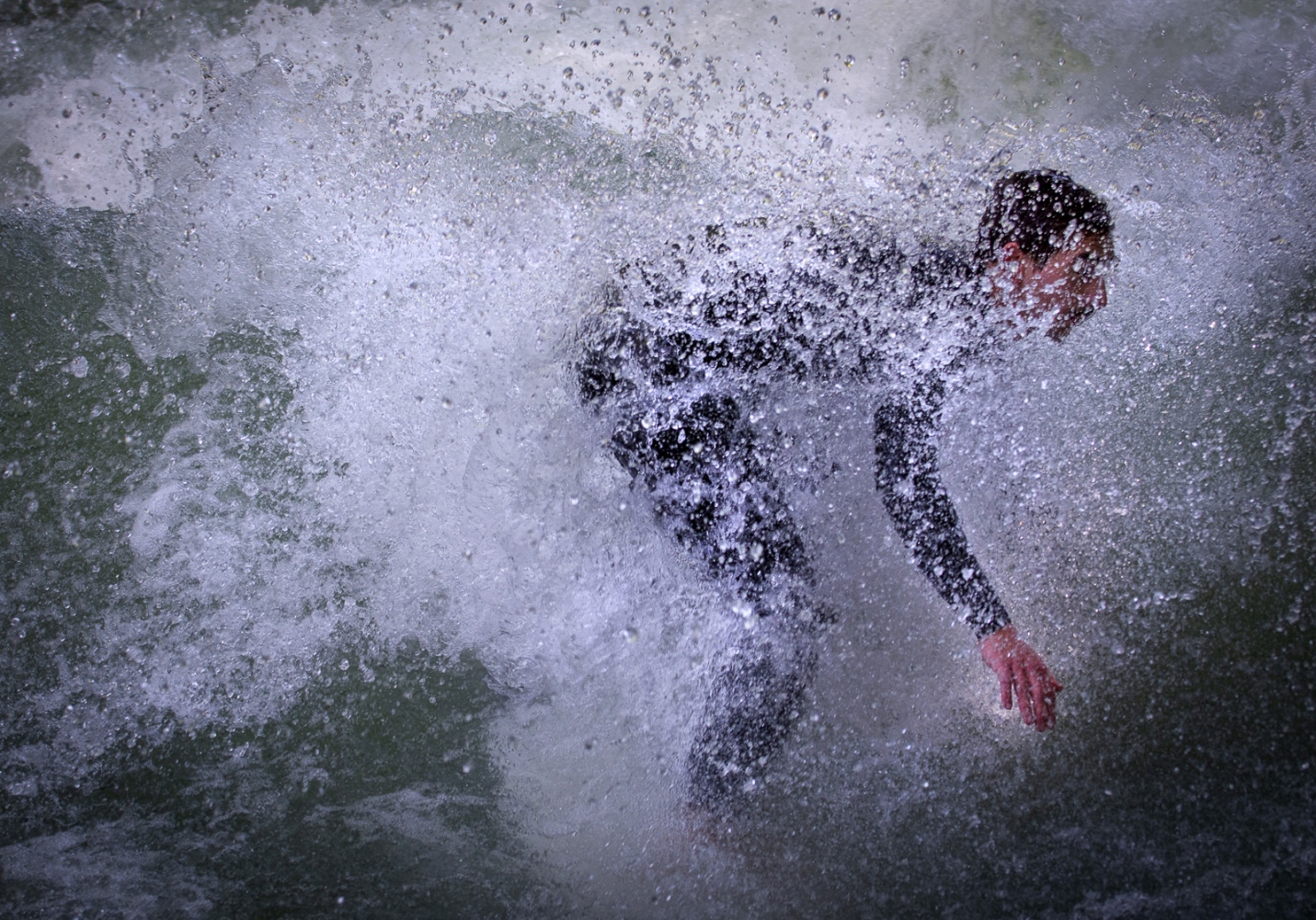 5 of 15 © 2021 Craig Stennett
In essence, the Eisbach is a narrow canal some 400 miles from the North Sea and 200 from the Adriatic with 8 tons of water per second rushing through it‘s middle, night and day. It‘s easy to understand why Munich has become known throughout much of Germany as ‘The City of Surfing’. 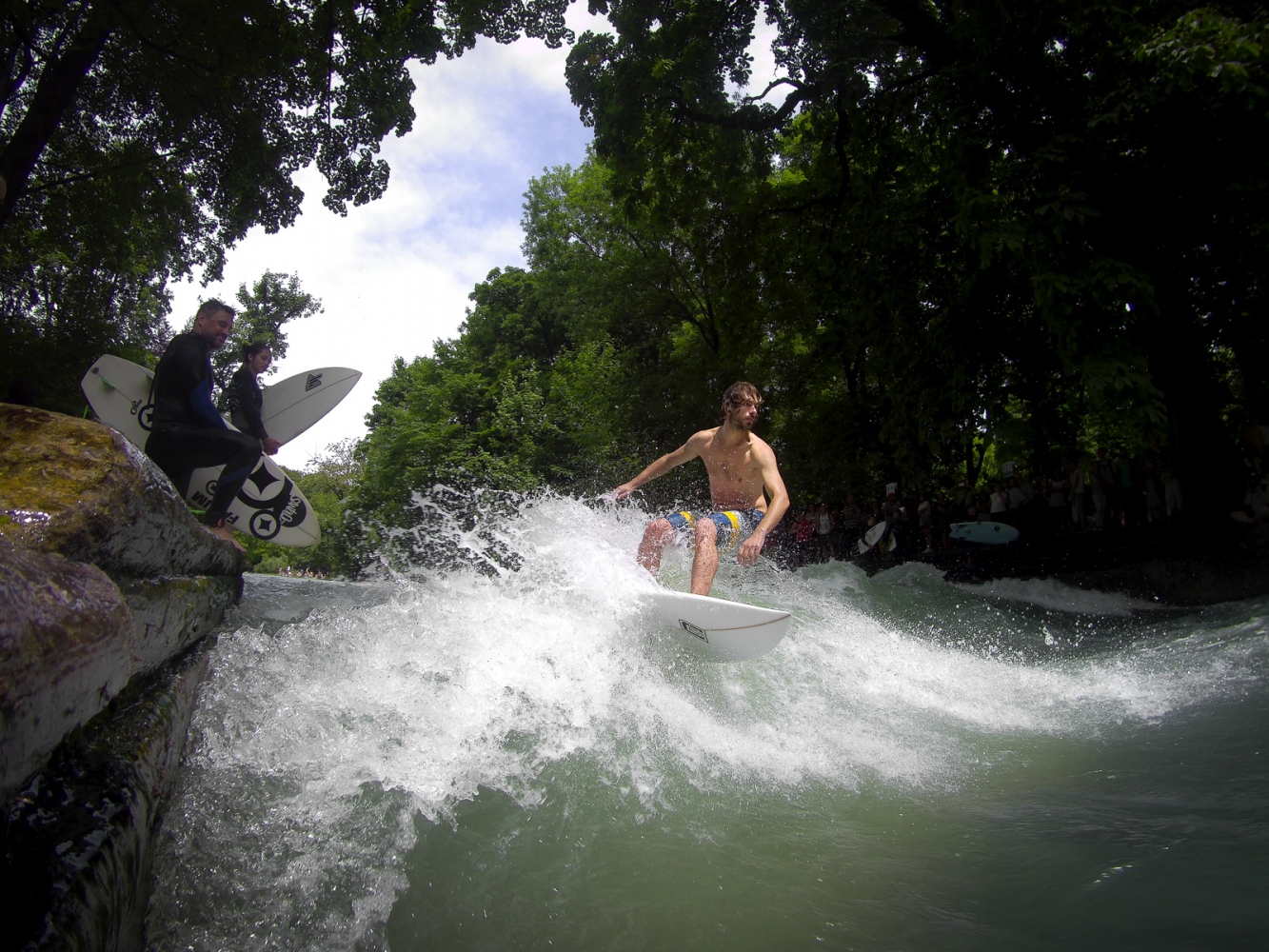 6 of 15 © 2021 Craig Stennett
The Eisbach (Ice Brook) in Munich, Bavaria, Germany. The Eisbach is a 2 kilometer man made river in Munich and it is the hub of the land locked city’s surf scene. It is situated beneath a bridge just past the Haus der Kunst on Prinzregentenstrasse, at the southern edge of the Englischer Garten, Munich's largest public park. The river forms a standing wave which has been aided by surfers adding wooden planks to the flow of the current. The Eisbach has been surfed since the early 1970's and the City of Munich now claims some 2000 full time surfers coming from diverse economic, age and social backgrounds.

7 of 15 © 2021 Craig Stennett
A spectacle of River Surfing takes place annually in the last weekend of July at the Eisbach in Munich.  Announced only several days before the competition itself the surfers will clash to see who is the acknowledged best. 'It‘s also just a cool place to hang out’, says Rapid Surf League co-founder Christian Bach. 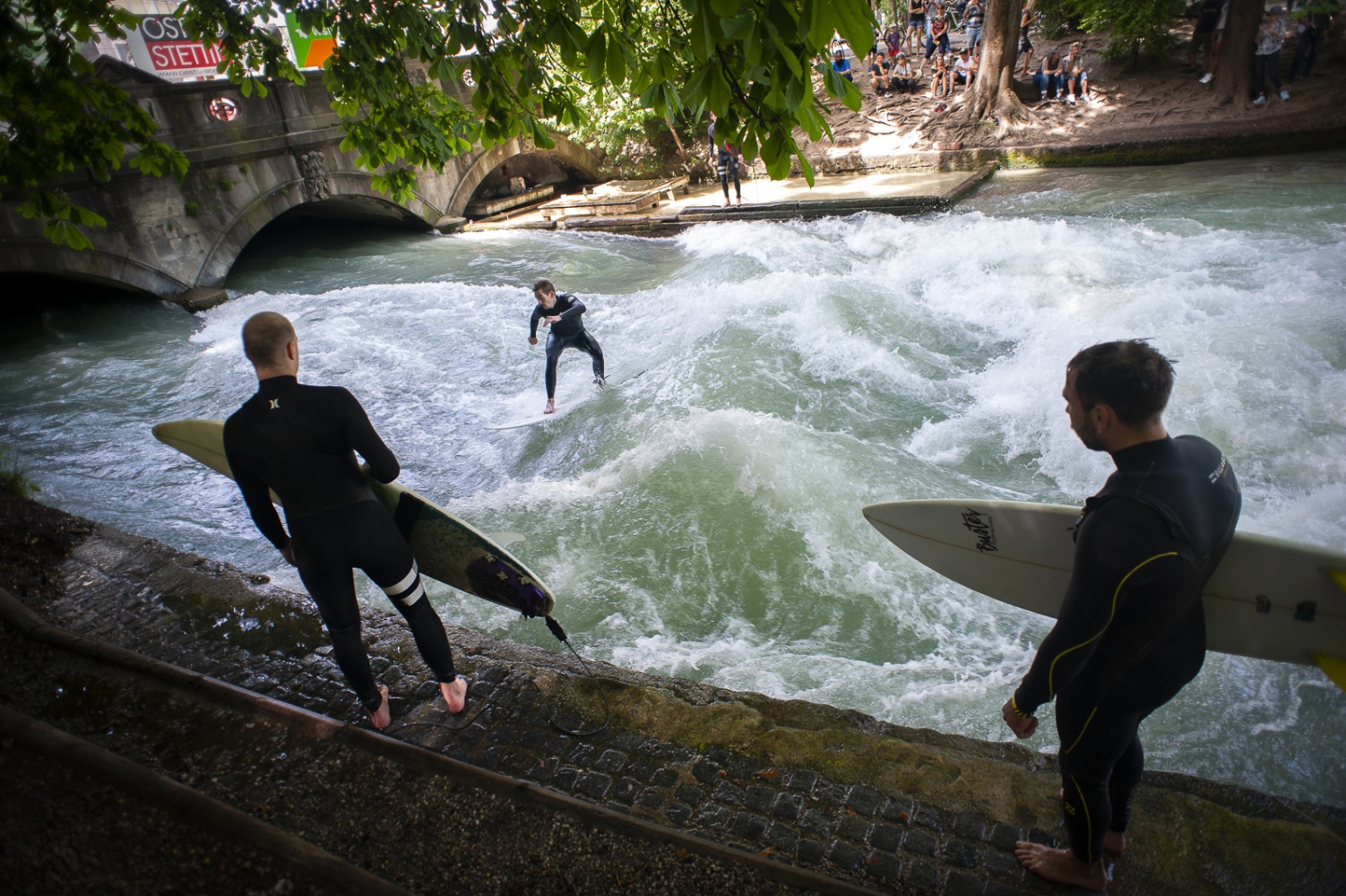 8 of 15 © 2021 Craig Stennett
The standing wave of the Eisbach, Munich Bavaria, Germany. Its water is cold and shallow, but it’s a constant for the citys surf community. 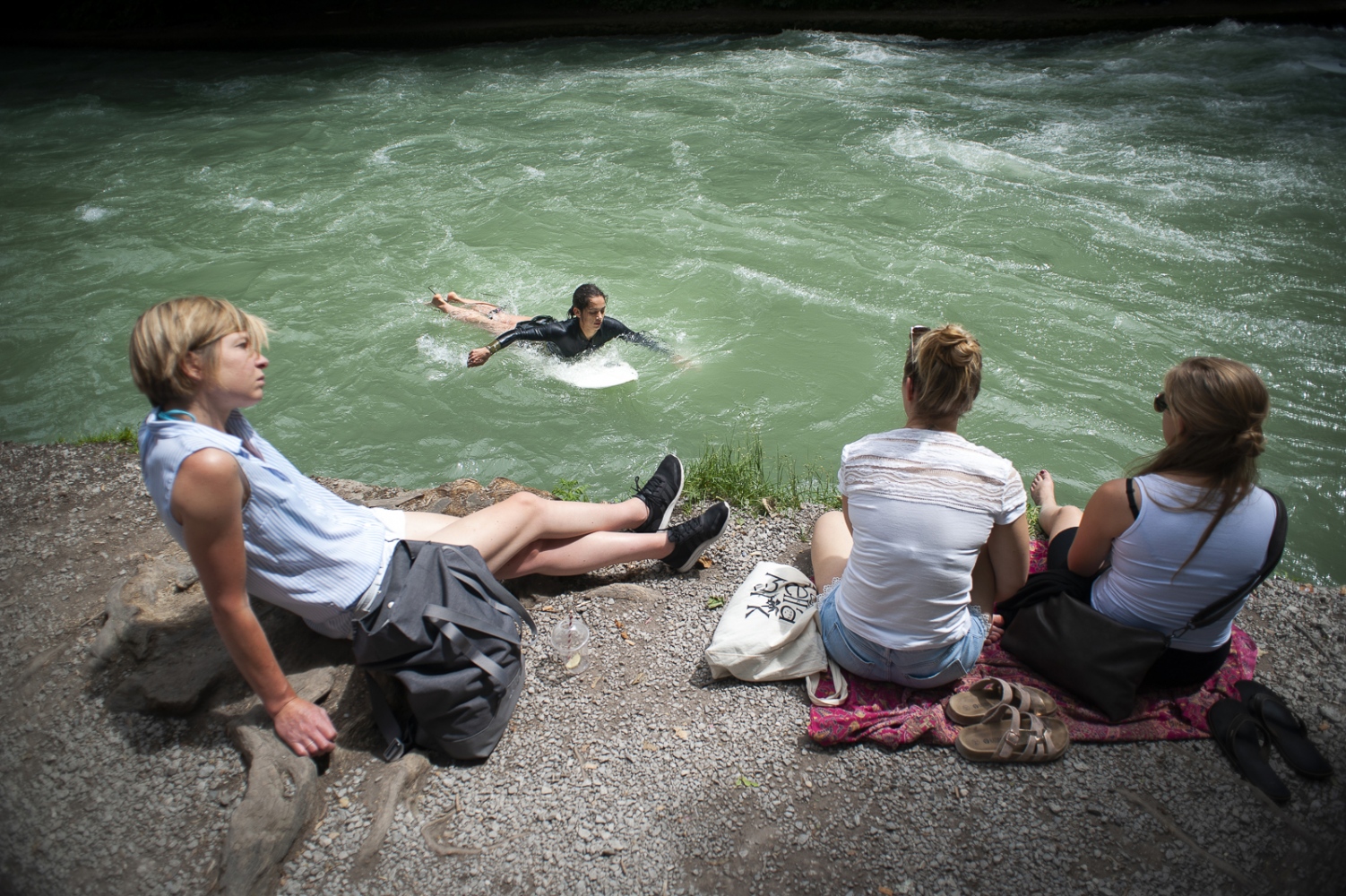 9 of 15 © 2021 Craig Stennett
The Eisbach has grown into a tourist magnet for the city. It’s now recorded as the second best attraction for visiting the city on Trip Advisor. 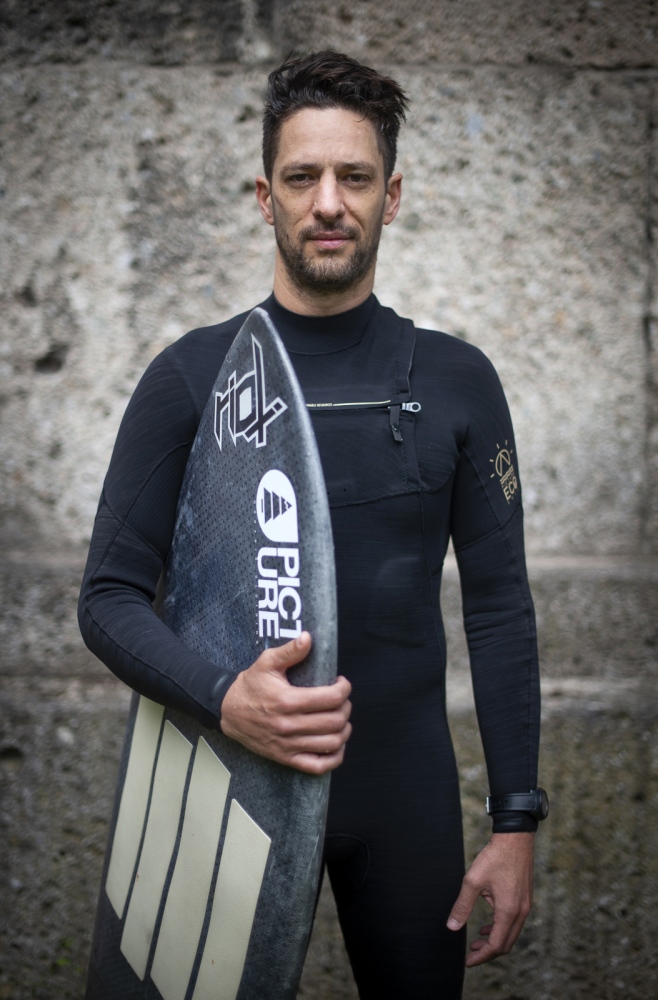 10 of 15 © 2021 Craig Stennett
Local surfer Alex Neumann: ’This wave has changed my life in terms of friendships, work and love. It builds character as you have to learn to not give up, to keep trying until you can master the Eisbachwelle’. Outside the Haus der Kunst art museum at the Eisbach, Munich, Bavaria, Germany. 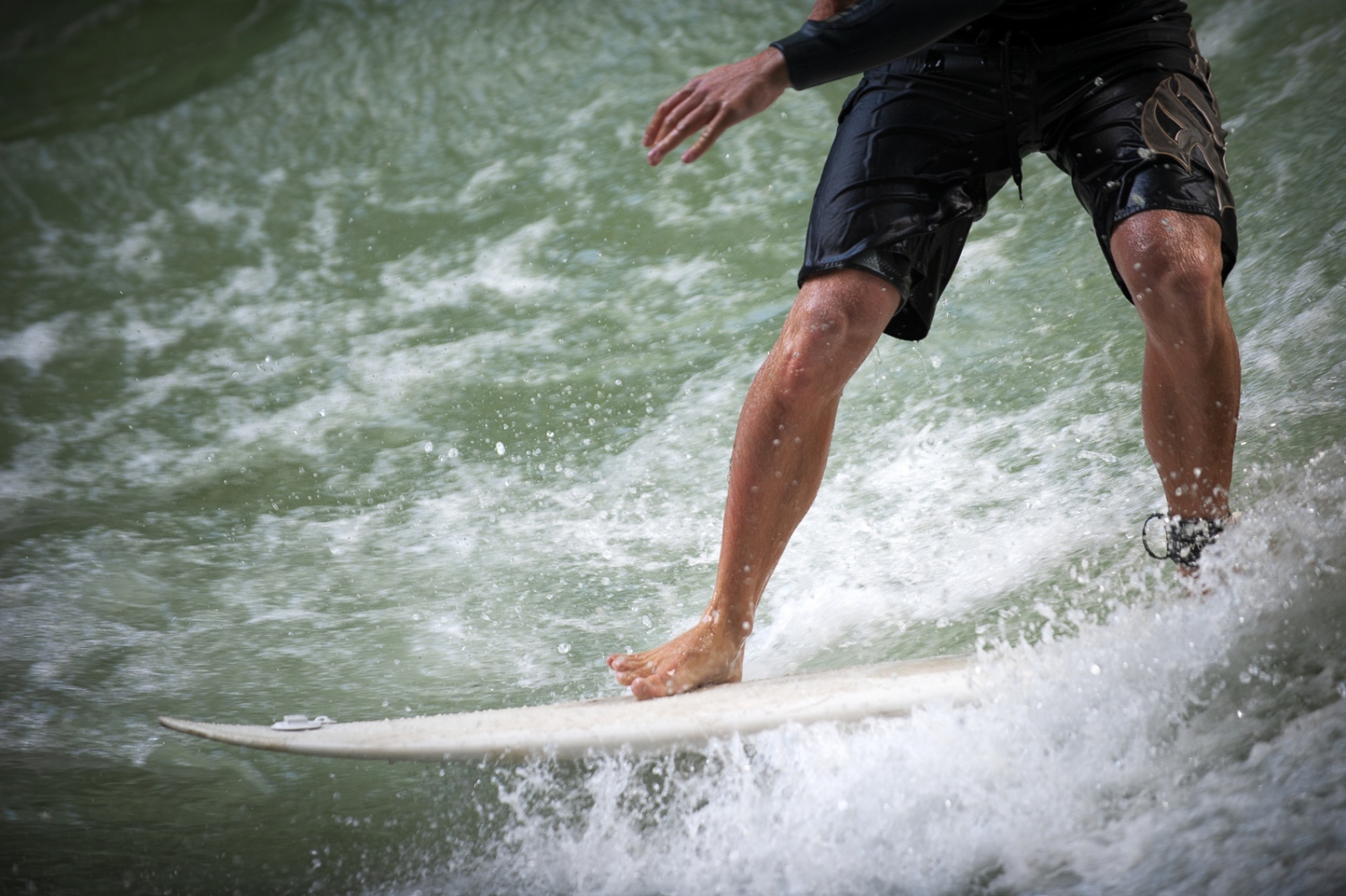 11 of 15 © 2021 Craig Stennett
You have to be experienced to surf the Eisbach successfully. A forcefull current and numerous submerged rocks to crash the wave take no prisoners. 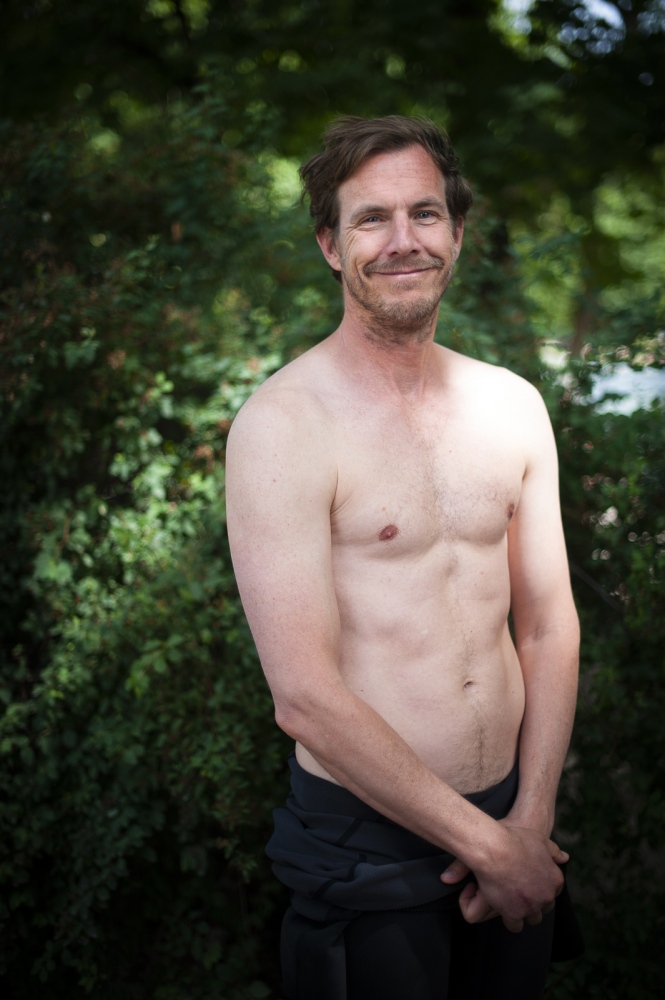 12 of 15 © 2021 Craig Stennett
Rapid Surf League co-founder Quirin Rohleder: ‘I can spend all day sending emails at work. It’s a relief to be able to go and do something tangible. You can surf anytime day or night in this city.’ 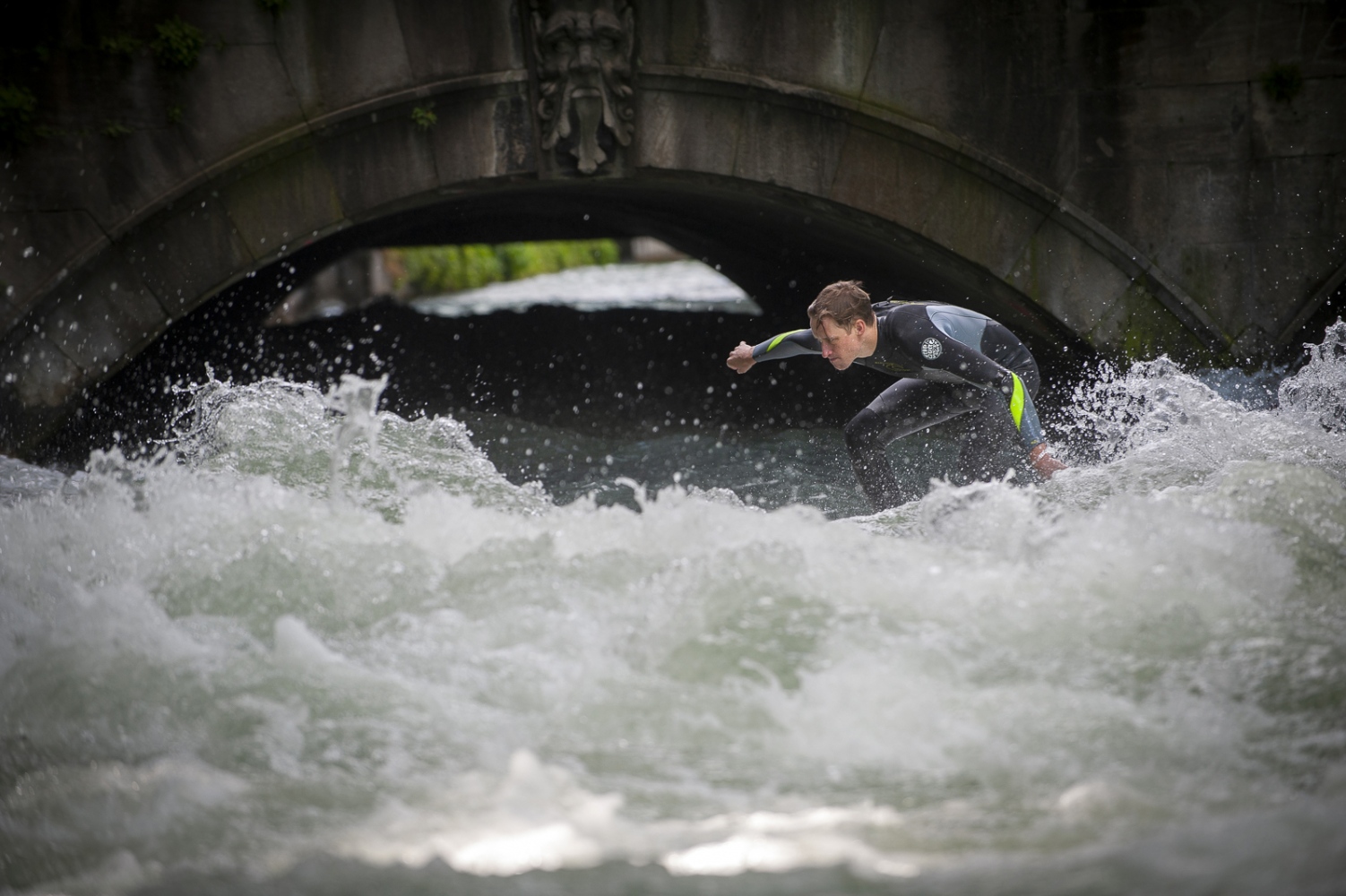 13 of 15 © 2021 Craig Stennett
You have to be experienced to surf the Eisbach successfully. A forcefull current and numerous submerged rocks to crash the wave take no prisoners. 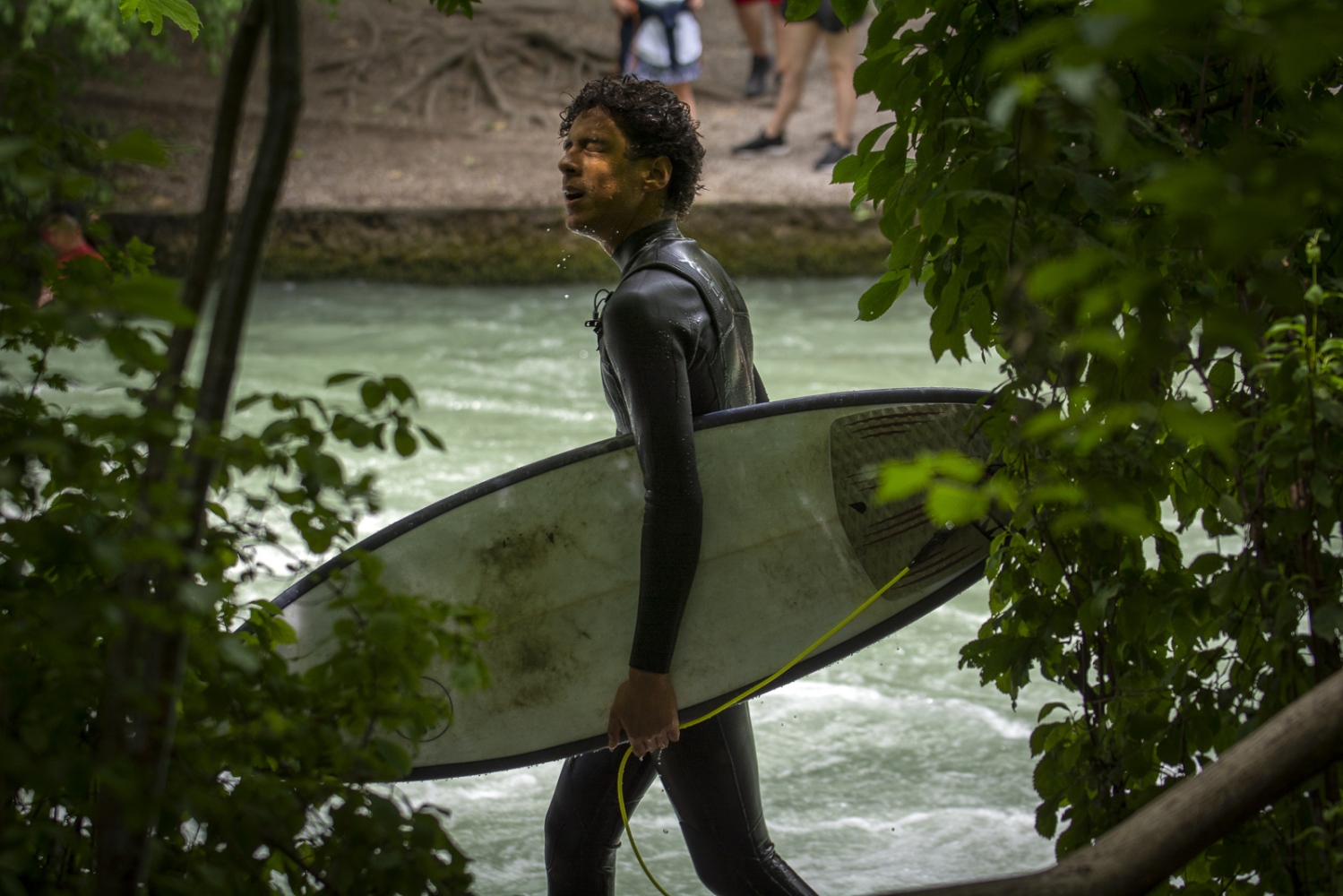 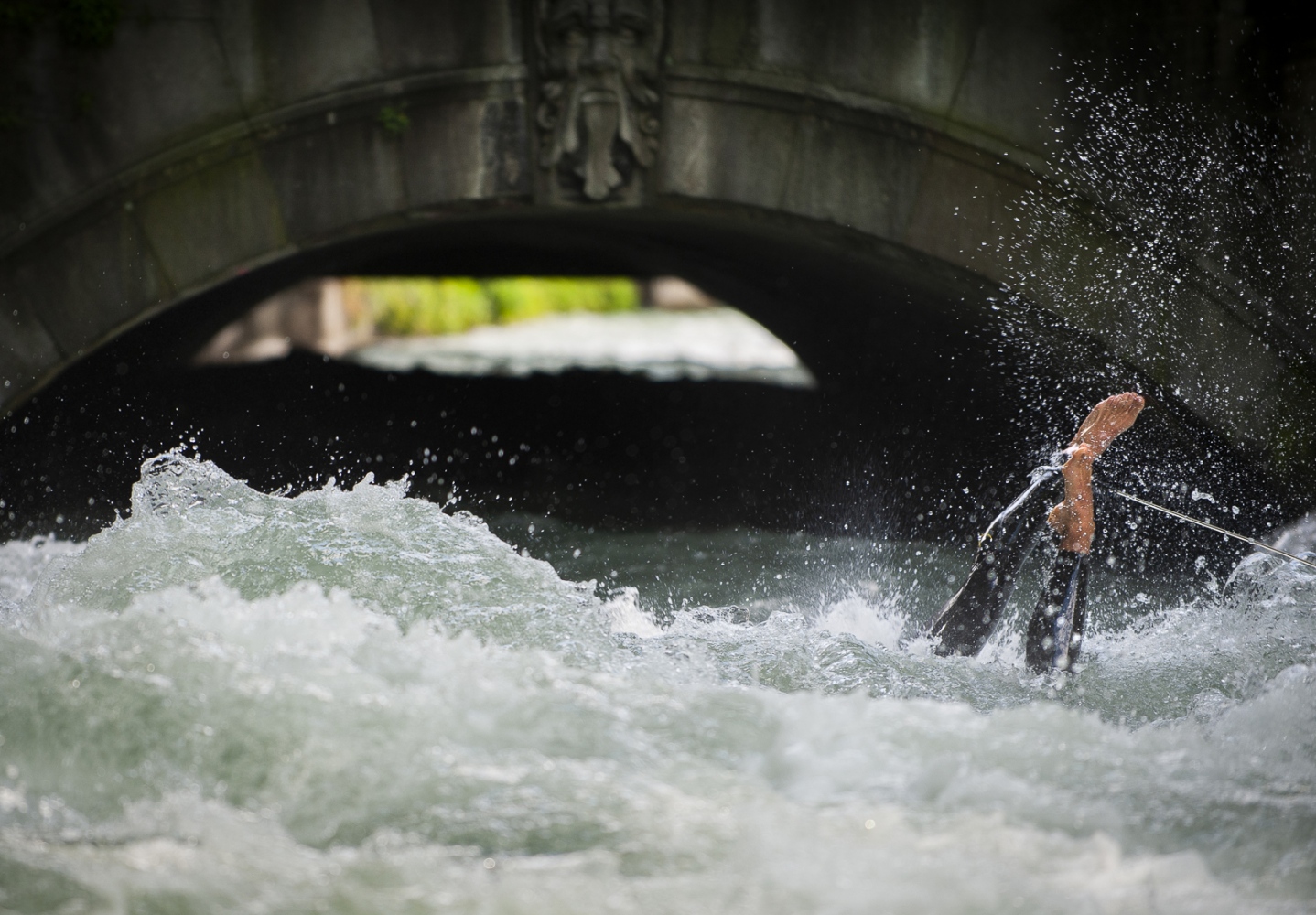 By craig stennett — Feature stories of both words and pictures from various assignments
Dec 31, 2020

20 Years of Hand in Hand, a blue print for co-existence

By craig stennett / Caza City, Gaza Strip. — The Gaza Strip on the Mediterranean coast bordered by Israel and Egypt is just 41 kilometres in length and..
Sep 4, 2016

By craig stennett / Lesbos, Greece — Here are the images and story from a recent assignment on the Greek Island of Lesbos. The piece appears in..
Feb 18, 2016