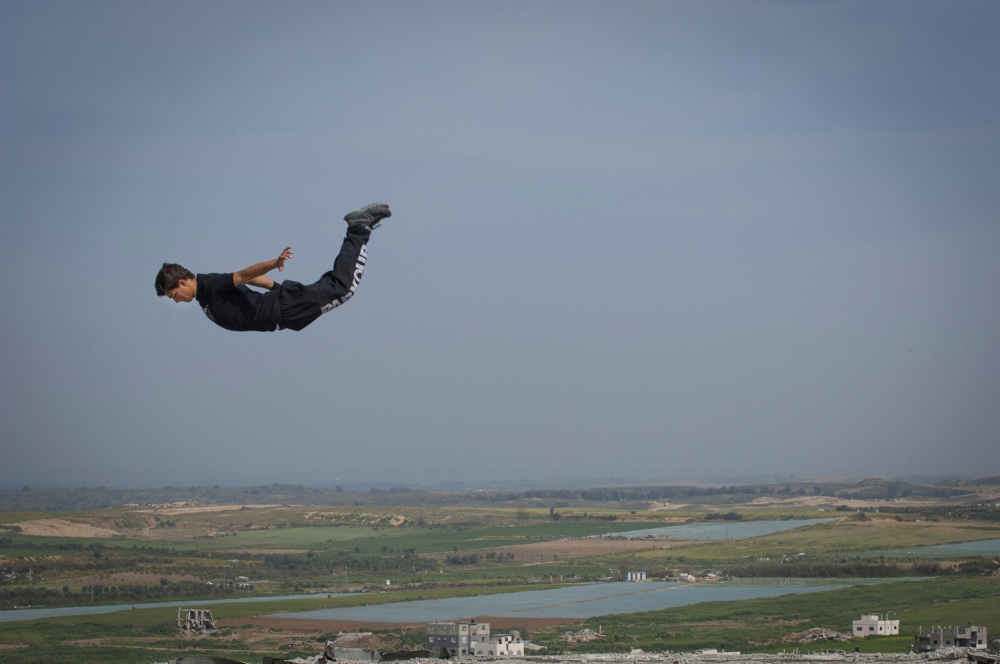 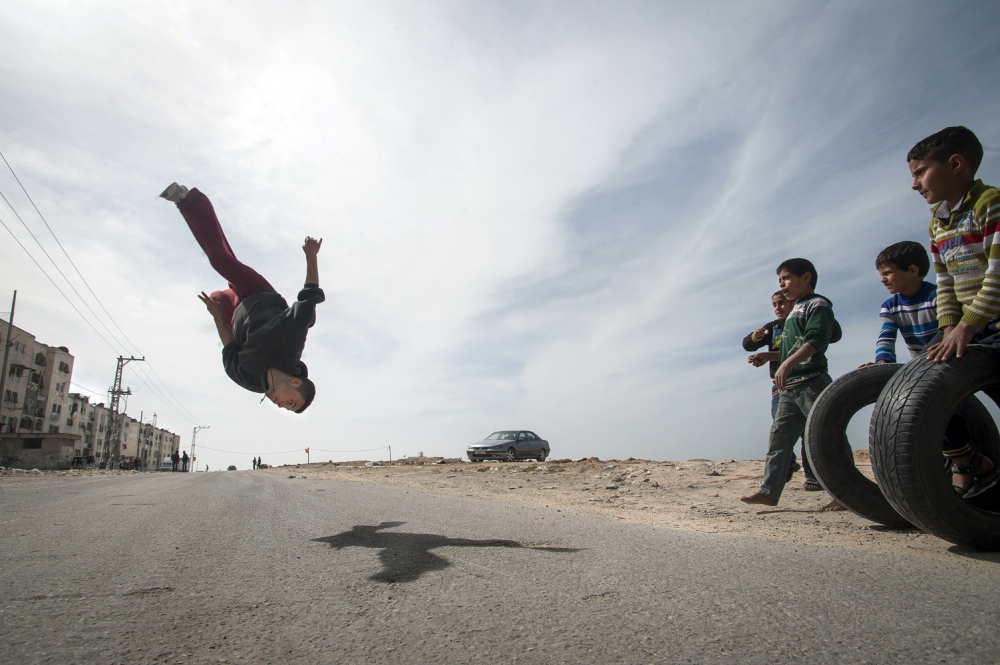 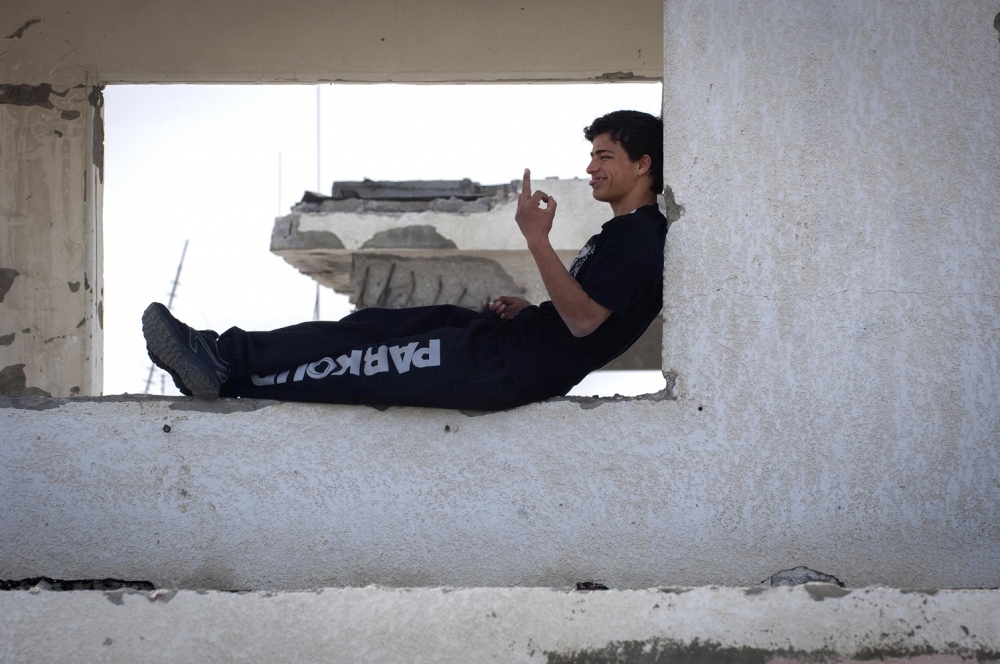 3 of 14 © 2021 Craig Stennett
18 year old Fahed Dawood offers a personal opinion on his fellow team members criticism of him having to take a rest. Beit Hanoun, Northern Gaza Strip. 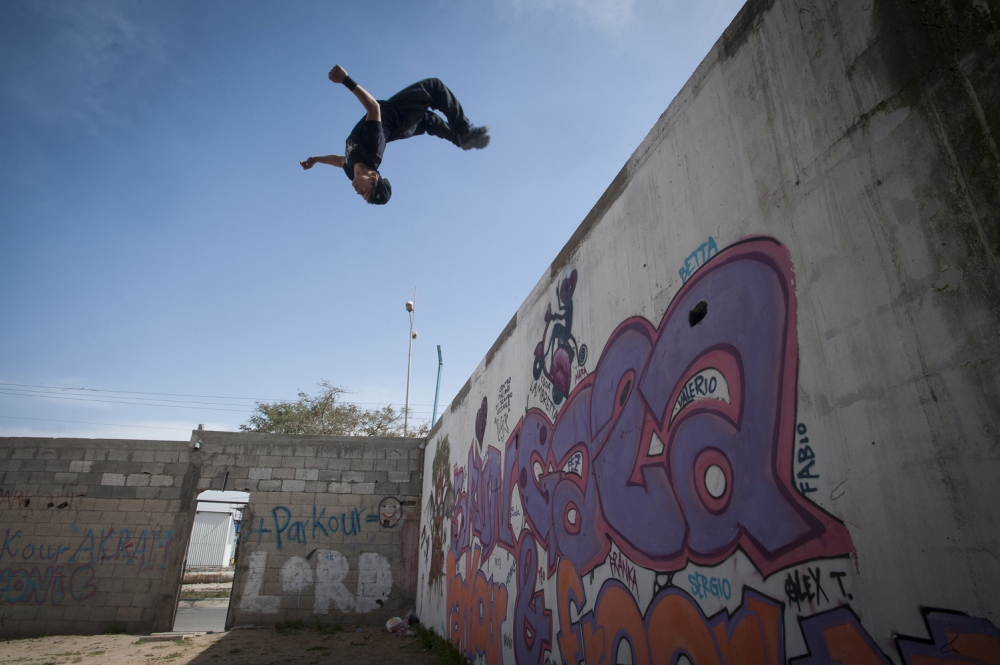 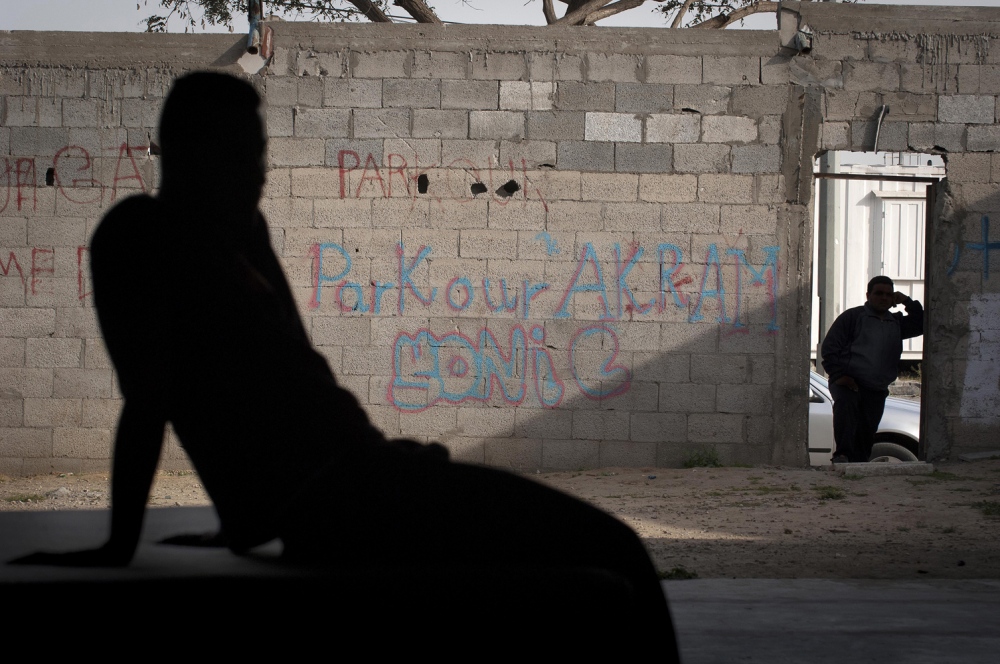 5 of 14 © 2021 Craig Stennett
A passer by takes a look in at the door of the Parkour Teams centre while one of the '3 Run Gaza members,19 year old Saed Shaqura, takes a break. 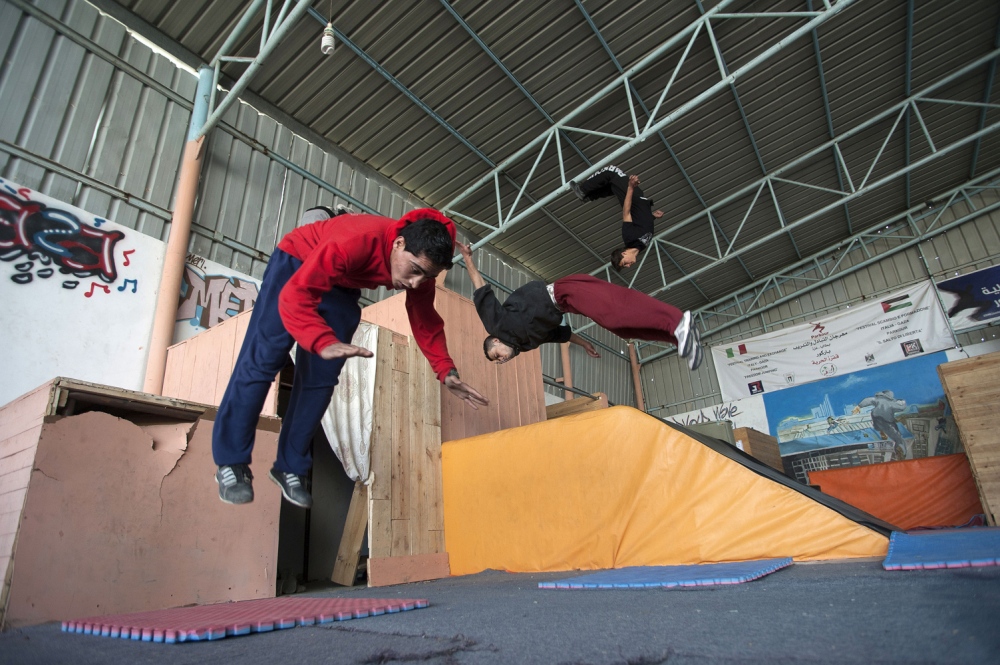 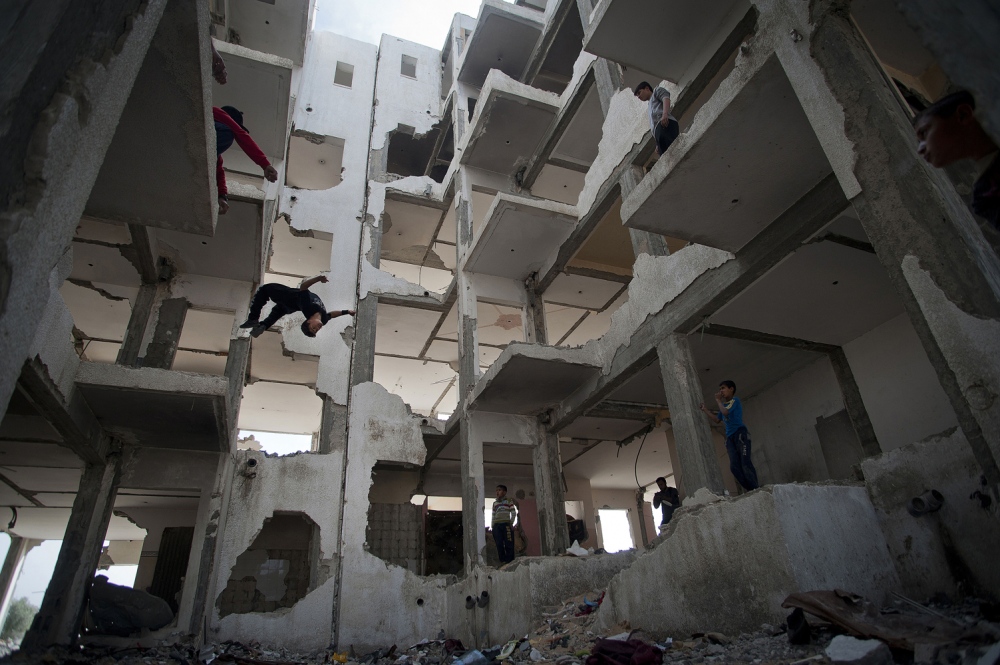 7 of 14 © 2021 Craig Stennett
'3 Run Gaza' at the bombed out remains of a flat complex destroyed in 2014 during Israel's 'Operation Protective edge', Beit Hanoun, Norther Gaza Strip. 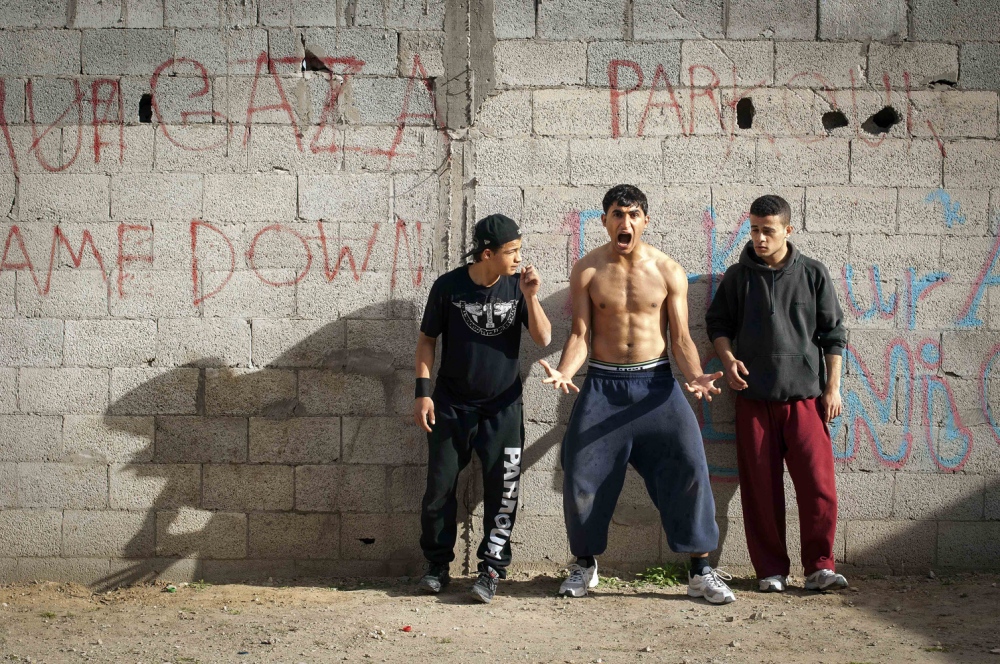 8 of 14 © 2021 Craig Stennett
19 year old Hamza Chalan gets himself psyched up for a jump at Parkour Team '3 Run Gaza' home base just off Saladin Road n Beit Hanoun, Gaza Strip. Hamza has lost two of his brothers to hostilities within the Gaza Strip. One brother in 2008 and the other in 2011: "In Gaza the situation we have is very bad. i like to be a role model for younger children and in some way through seeing my Parkour make them happy.' 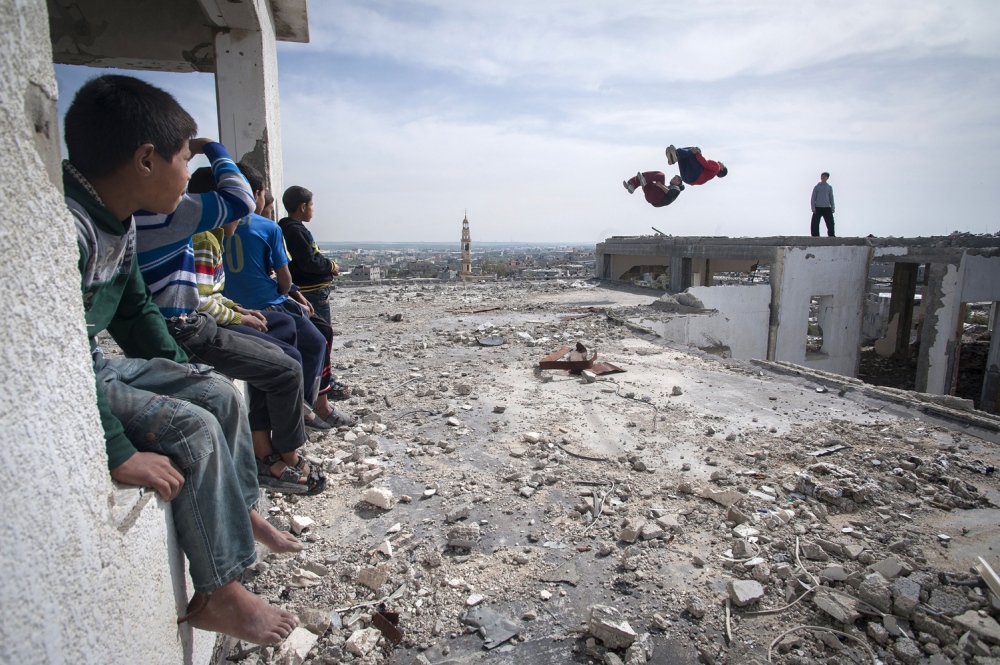 9 of 14 © 2021 Craig Stennett
'3 Run Gaza' at the bombed out remains of a flat complex destroyed in 2014 during Israel's 'Operation Protective edge', Beit Hanoun, Northern Gaza Strip. 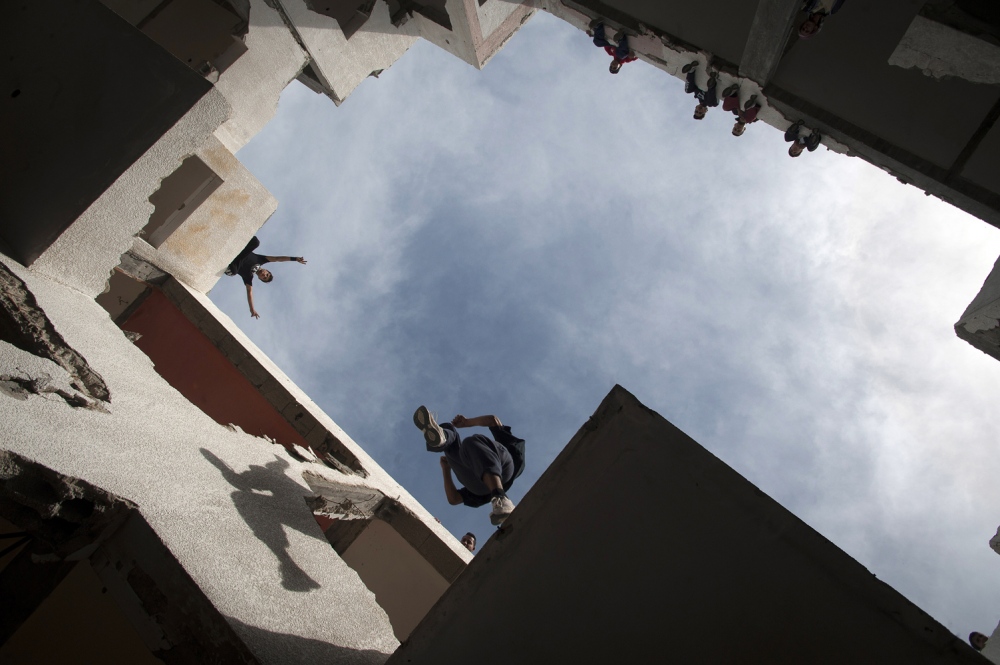 10 of 14 © 2021 Craig Stennett
'3 Run Gaza' at the bombed out remains of a flat complex destroyed in 2014 during Israel's 'Operation Protective Edge', Beit Hanoun, Norther Gaza Strip. 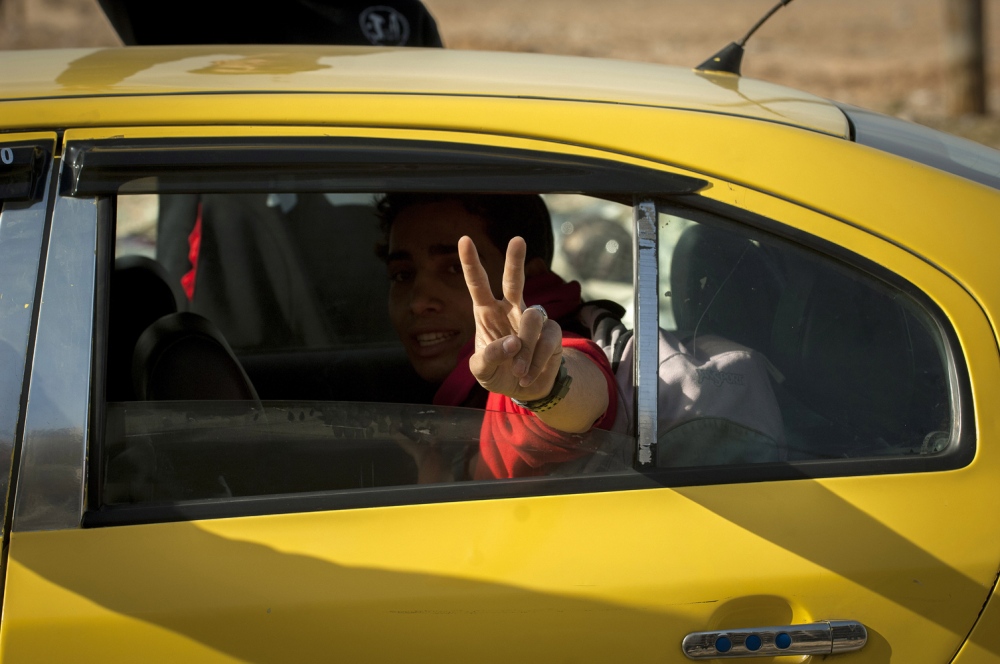 11 of 14 © 2021 Craig Stennett
19 year old Essam Dahaman leaves Beit Hanoun by Taxi in the North of the Gaza Strip. Essam is a member of the Gazan Parkour team '3 Run Gaza'. 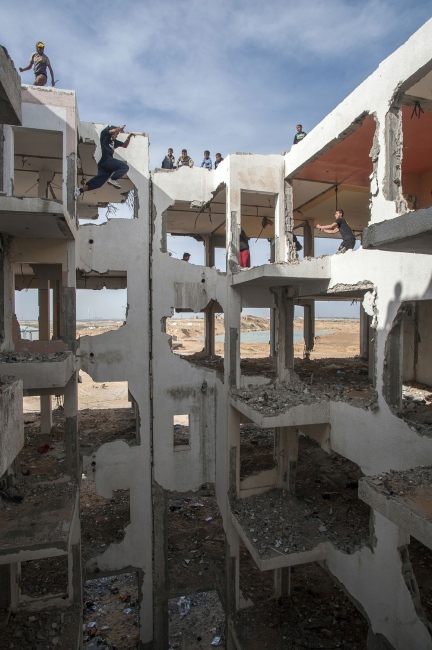 12 of 14 © 2021 Craig Stennett
'3 Run Gaza' at the bombed out remains of a flat complex destroyed in 2014 during Israel's 'Operation Protective Edge', Beit Hanoun, Norther Gaza Strip. 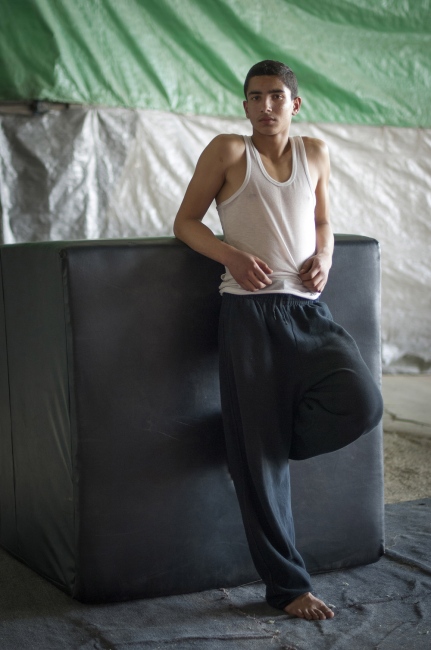 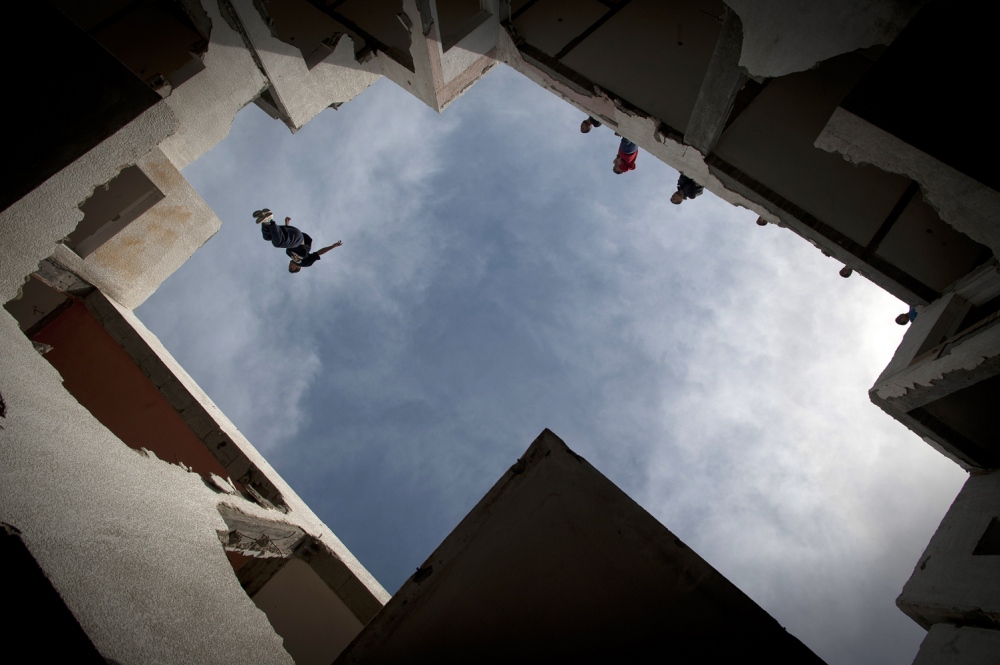 Parkour in the Gaza Strip.

Parkour, derived from the French “parcours du combattant“ meaning a military obstacle course, can trace its lineage back to the turn of the 20th century.  Originally pioneered by French Naval Officer Georges Hébert who during his time in Martinique coordinating a rescue operation he witnessed the native African peoples' exceptional athleticism and how they accomplished this by physically interacting with their surroundings. In 1905 Hébert published his book ‘La Methode Naturelle’ and his training technique has gone on to be significantly adopted and absorbed by much of the worlds Military. In its simplest form Parkour is the activity of moving efficiently and quickly through obstacles, navigating from point A to B by the shortest most direct route. However, its modern day version can be viewed as much as an art form as a physical discipline.

Fast forward half a century and Raymond Belle enters on to the Parkour history scene. Belle, a former French Special Forces soldier, on returning to his hometown of Lisses bordering Paris he introduced his son David to the discipline of ‘parcours du combattant’ and the founding principals and teachings of Georges Hébert. It is David Belle who during the 1980’s and 90’s went on to combine the lessons from his father with his own proficiency in gymnastics and martial arts to give birth to modern day Parkour.

Now enter into the world of the Gaza Strip. A stretch of land 25 miles long and 7.5 miles wide at is furthest point and home to over 1.8 million Palestinians. It has experienced 3 wars in the last 6 years and has been enduring a full land, sea and air blockade on its borders since 2007.  The United Nations Chief Ban Ki-moon described the destruction of the urban landscape inflicted with in Gaza during Israel’s 2014 ‘Operation Protective Edge’ as: "beyond description.”

This is the home of the Parkour group ‘3 Run Gaza’. A core committed nucleus of around 20 individuals with an additional 100-affiliated members. Its 25-year-old Mohammad Lubad who manages and coaches the group: ”My background is in gymnastics but after seeing the film District B-13 (2004 French action adventure movie featuring Parkour and often sighted as introducing the discipline to a wider audience) I knew I wanted to learn to do these moves. So I started to copy them from the film and became more interested in Parkour and established the club.”  Mohammad is just about audible while he describes his journey into Parkour above a barrage of sound as techno music spills out of two huge speakers positioned within ‘3 Run Gaza’s’ training centre near Beit Hanoun in the Northern area of the Strip. The group have had their headquarters there for around 10 months. Raising funds from shows and commercials alongside the awarding of discretionary grants. This has enabled them to establish their own home base for practice.

The Parkour practitioners of Gaza have, thankfully, had an easier run at acceptance by the broader community and its inherent conservative Psyche than their ‘cousin’ Breakdancers. The gymnastic element of Parkour seems to be the deciding factor in this. The Strips authorities, Hamas, have largely embraced their sport and the benefits it brings. Where as Breakdancing, which also flourishes with in Gaza, has had an uphill struggle with its familiarity in the use of western rap music and the distinctly different ‘badge’ clothing that’s worn. 17 year old Mohammed Hennawy acknowledges that: “ Its still rare to see someone doing Parkour in Gaza.” However, the urban landscape of the strip with its war shattered buildings have become a Parkour and Freerunners playground. As a sport that is concentrated on overcoming obstacles it is probably one of the most appropriate disciplines to embrace for the 70% of Gaza’s population that is under the age of 25. Obstacle’s, in a myriad of forms, is daily life in the Strip and an ability to master them is critical to not only ones own survival but also the larger Palestinian community itself.

By craig stennett — Feature stories of both words and pictures from various assignments
Dec 31, 2020

20 Years of Hand in Hand, a blue print for co-existence

By craig stennett / Caza City, Gaza Strip. — The Gaza Strip on the Mediterranean coast bordered by Israel and Egypt is just 41 kilometres in length and..
Sep 4, 2016

By craig stennett / Lesbos, Greece — Here are the images and story from a recent assignment on the Greek Island of Lesbos. The piece appears in..
Feb 18, 2016