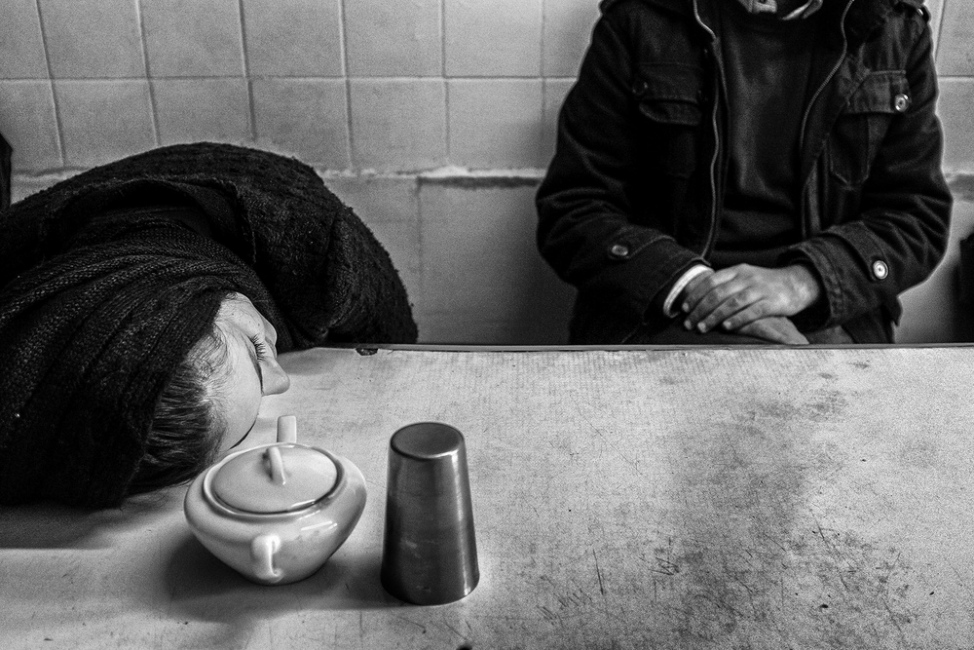 Exhibitions News
“From Labyrinth” at Cortona on the Move
clary estes
Aug 21, 2017

Farshid Tighehsaz’s “From Labyrinth,” part of the New Visions exhibition at COTM, reads very much like a political poem, touching on the personal, the sexual and the social level as Tighehsaz moves through his native Iran to understand the world he is living in. Though the exhibition is easily one of the most contained and small exhibition of the festival, it speaks with a clear and strong voice to the experiences and historical anxiety of young Iranian adults today. “From Labyrinth” is Tighehsaz’s rumination on “the fears and effects of the Islamic revolution and the impact of 8 years of war on its later generations.”

By Clary Estes — As I drove into the parking lot of the Powell County High School I could hear the exaltations of a local..
May 30, 2020

By Clary Estes — Hospitals in rural America are facing a slew of challenges as the Coronavirus (COVID-19) begins infiltrating..
Apr 5, 2020

By Clary Estes — This is Part 1 of a 4 part series on rural hospital preparedness. Calm Before The Storm: Rural Hospitals..
Apr 2, 2020

By Clary Estes — "As the bidding wars between states drive the prices of medical equipment ever upward, it is hard to..
Apr 1, 2020

By Clary Estes — A new  study that has come out of China claims to have found that people with type A blood may be more..
Mar 22, 2020

By Clary Estes — Patrons of Rooster Brew, a brewpub located in the small town of Paris, in rural Bourbon County, Kentucky,..
Mar 20, 2020

Interview with Hans Madej - Standing Between the Old and the New

By Clary Estes — Hans Madej is a man locked in the tesseract of history. Through his work he explores how the echoes of our..
Dec 20, 2019

By Clary Estes / Hindman, Kentucky — A small sign reading “Dulcimers Made Here” leads into the  Appalachian School of Luthiery..
Dec 17, 2019

By Clary Estes / Kentucky — It is a starkly and bitterly cold winter morning in Peewee Valley, Kentucky, just outside of Louisville. The..
Dec 10, 2019

By Clary Estes — As you drive along the picturesque rolling hills of central Kentucky horse country you may unexpectedly pass..
Nov 19, 2019

By Clary Estes — Disclaimer: The views and opinions expressed in this article are those of the authors and do not..
Sep 18, 2019

By Clary Estes — Disclaimer: The views and opinions expressed in this article are those of the authors and do not..
Jun 8, 2019

By Clary Estes — Nina Postica remembers her time as a deportee in Siberia when her mother was forced to sell their beloved..
May 26, 2019

By Clary Estes — I recently got to talk with Lesia Maruschak about her etherial work on Holodomor, the Soviet Era Ukrainian..
May 15, 2019

By Clary Estes — I sat down with the Healthy Times radio show to talk about the media's coverage of the opioid epidemic..
Apr 10, 2019

By Clary Estes — Humans aren’t the only caregivers working in Kentucky health-care facilities. Across the state,..
Nov 16, 2018

By Clary Estes — Beyond the tragedy for thousands of Kentucky families, opioid abuse and overdose deaths are a problem for..
Aug 31, 2018

Stories from the Needle Exchange - Interview 3

Stories from the Needle Exchange - Interview 2

By Clary Estes — "I started with methamphetamines and then heroin was there one day..." The Lexington-Fayette..
Aug 28, 2018

By Clary Estes — Nina Postica remembers her time as a deportee in Siberia when her mother was forced to sell their beloved..
Aug 28, 2018