Location: Grand Bassam, Côte d'Ivoire, West Africa
Nationality: American/Ivoirienne
Biography: My career as a photographer began while studying at Columbia College in Chicago under the tutelage of Bob Thall, Ruth Thorne-Thomsen and Alan Cohen. These mentors helped me develop a particular affinity for portraiture and encouraged me to... read on 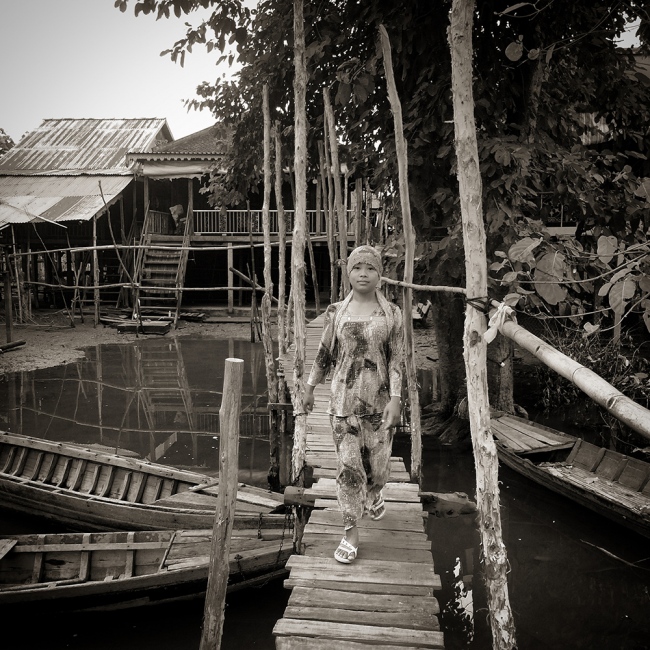 A young Muslim girl crosses a foot bridge to get to her boat in the Cham Village of Châu Đốc, Mekong Delta, Vietnam. 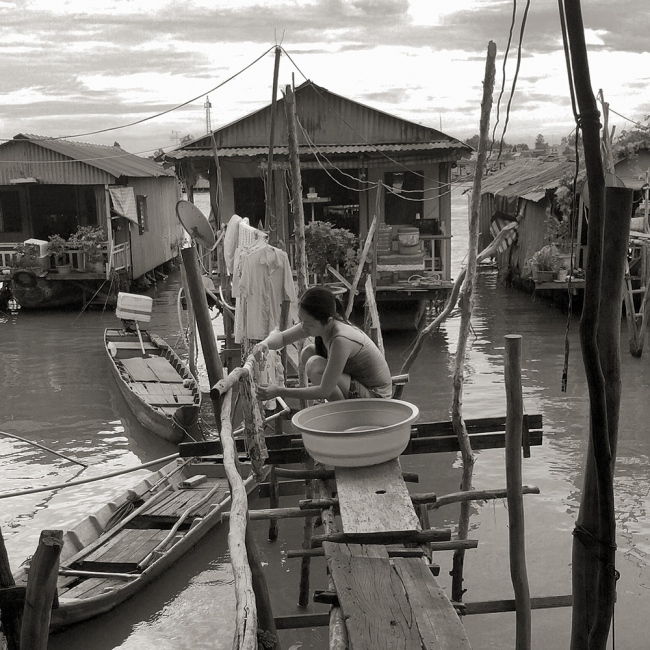 A young woman lays her laundry out to dry at her house on stilts in Châu Đốc, Mekong Delta, Vietnam. 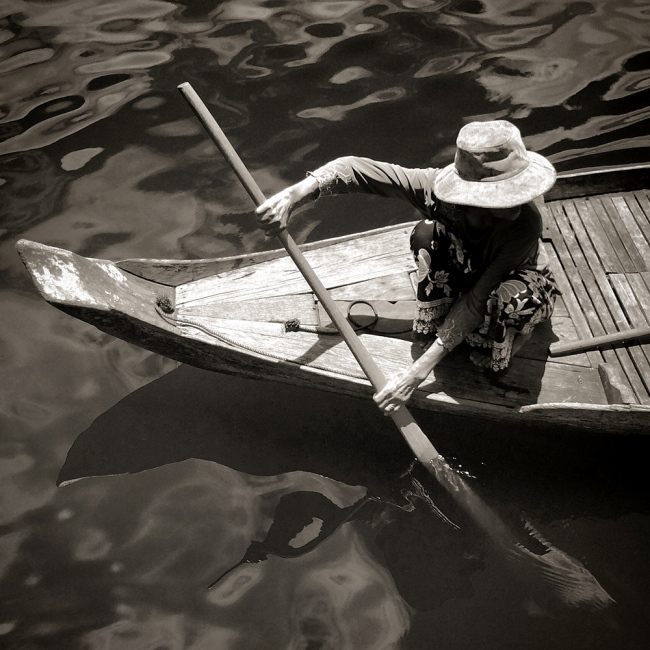 A woman from a floating village rows her boat along the Mekong River in Cambodia. 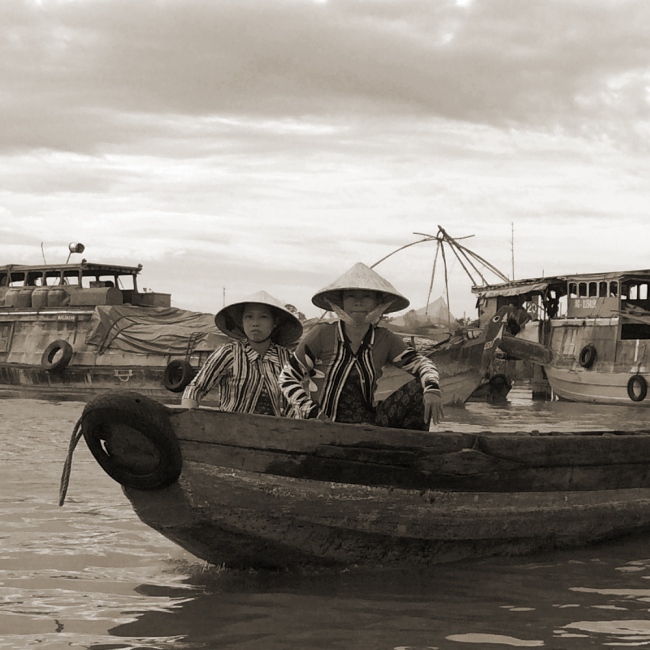 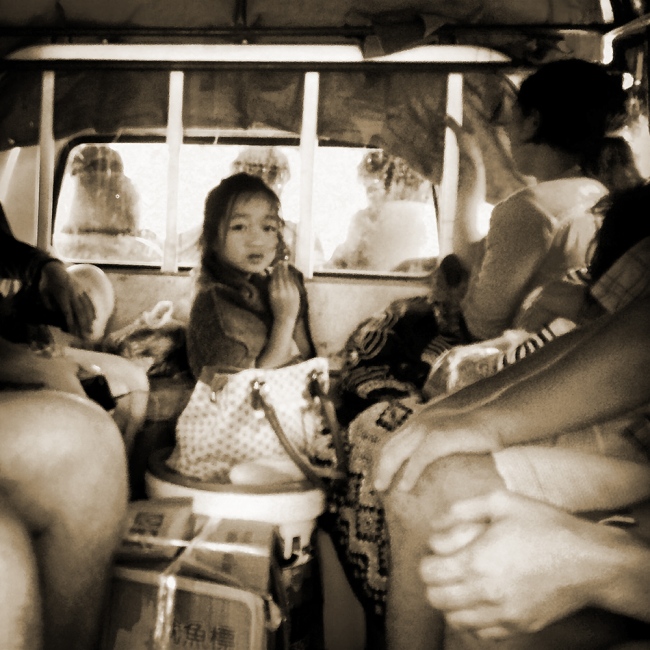 A young girl sits in the back of a crowded truck, en route - Nong Khiaw to Laung Prabang, Laos. 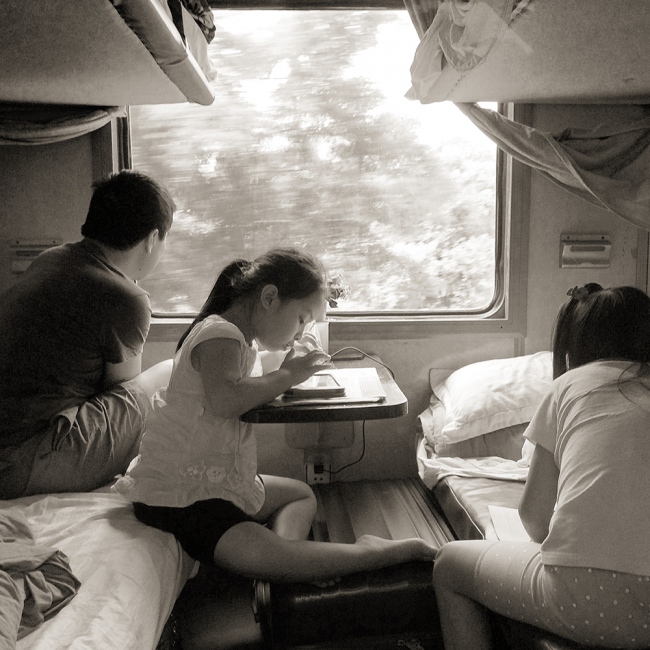 A father travels by train with his daughter and niece from Hanoi to Hué, Vietnam. 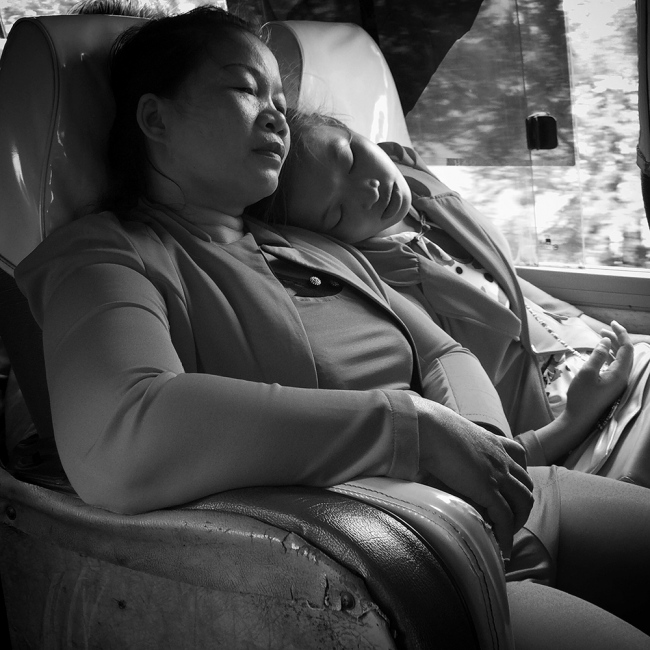 A mother and daughter, asleep on a local bus from Hà Tiên to Châu Đốc, Vietnam 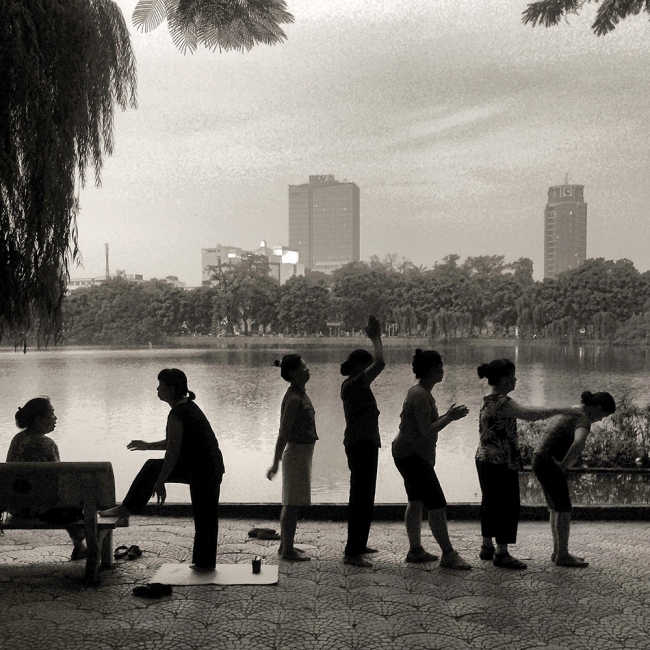 An evening women's group that meets on the Hoàn Kiếm Lake in Hanoi. They excercise, stretch, and give each other back rubs as they stand in a row. 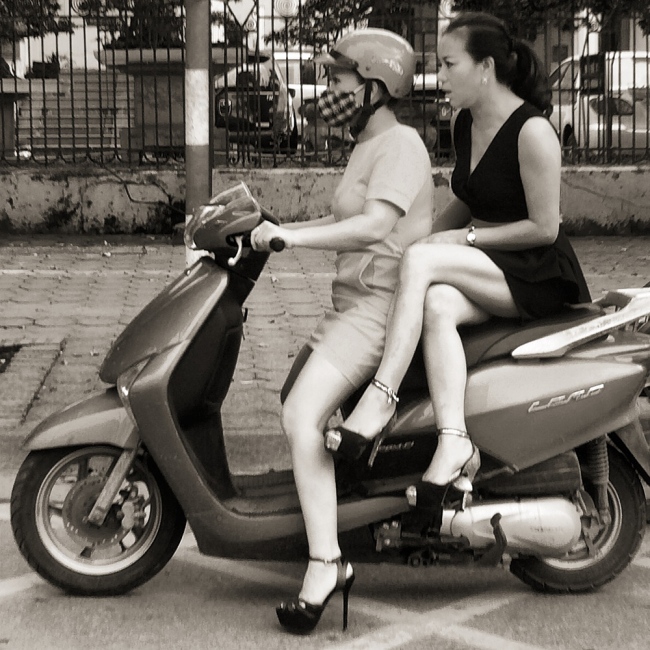 Young women on a motorcycle in Hanoi, Vietnam. 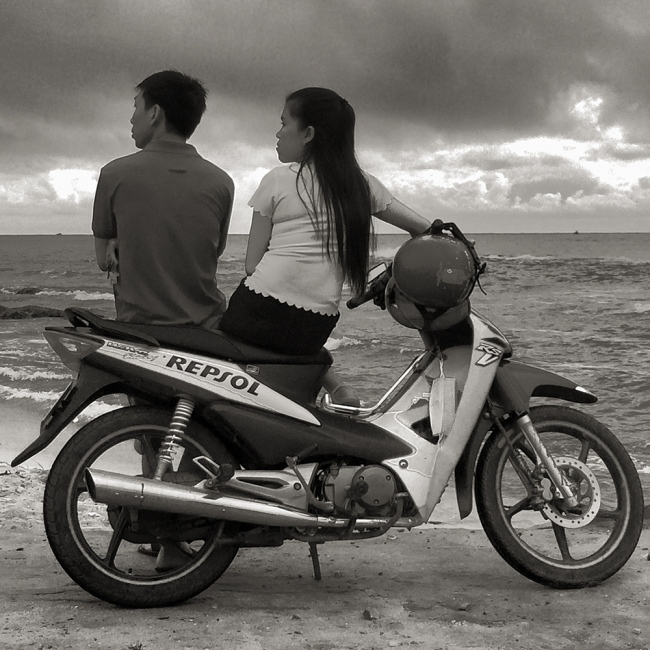 A young couple stop to watch the sunset at the beach on Phú Quốc Island, off the southwest coast of Vietnam. 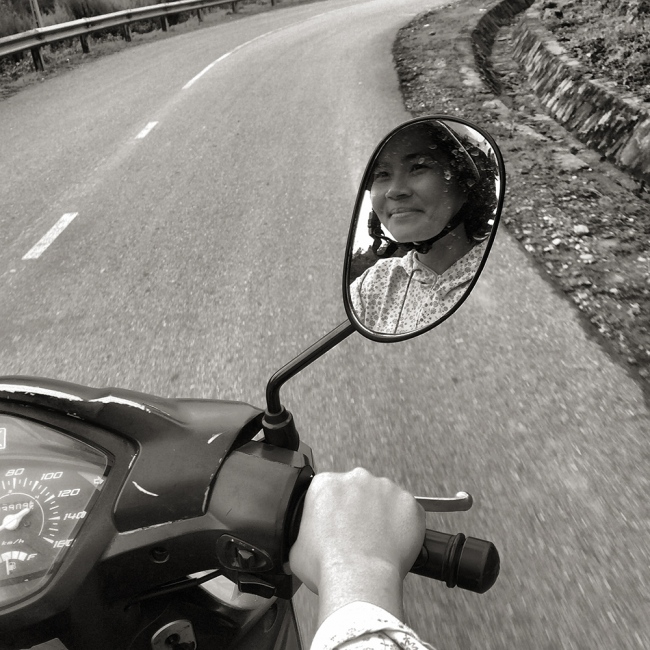 My motorcyle diary companion and chauffeur, Lý, in the Sapa District of Vietnam. 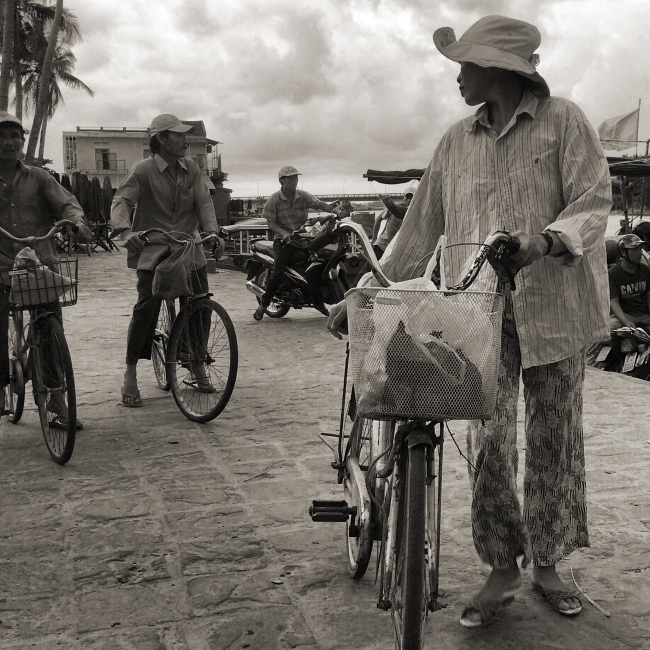 At the bicycle and motorbike ferry in Hội An, Vietnam. 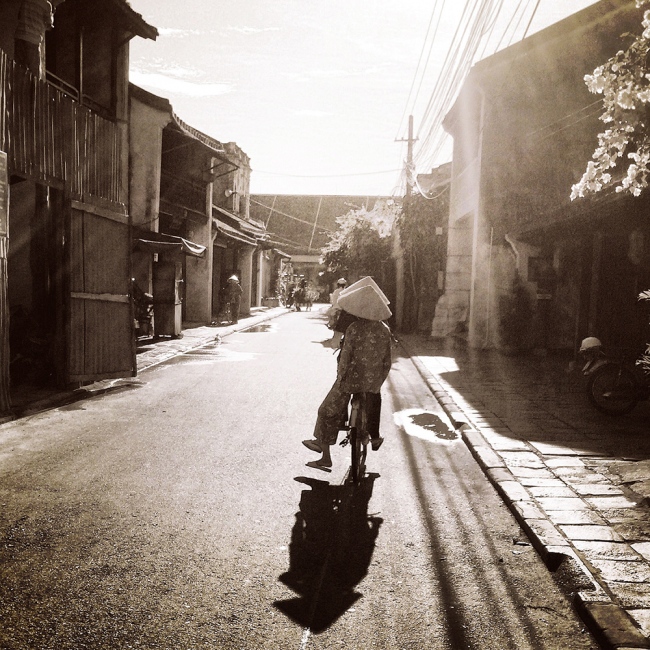 Two women ride tandem on a bike to the morning market in Hội An, Vietnam. 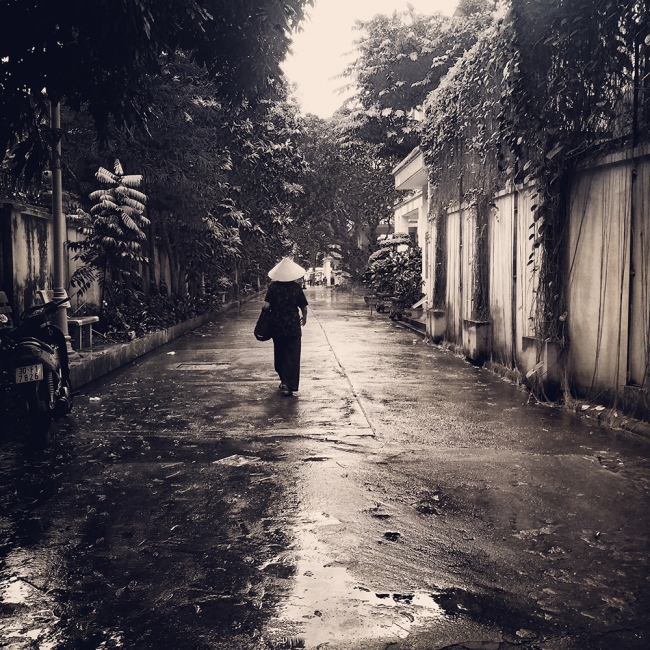 A woman walks alone in the rain in Hanoi. 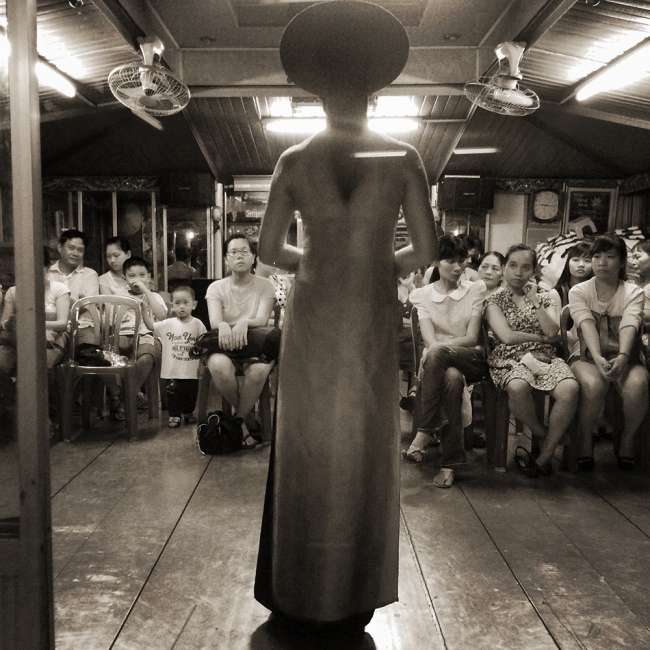 A traditional singer performs on a boat on the Perfume River in Hué, Vietnam. 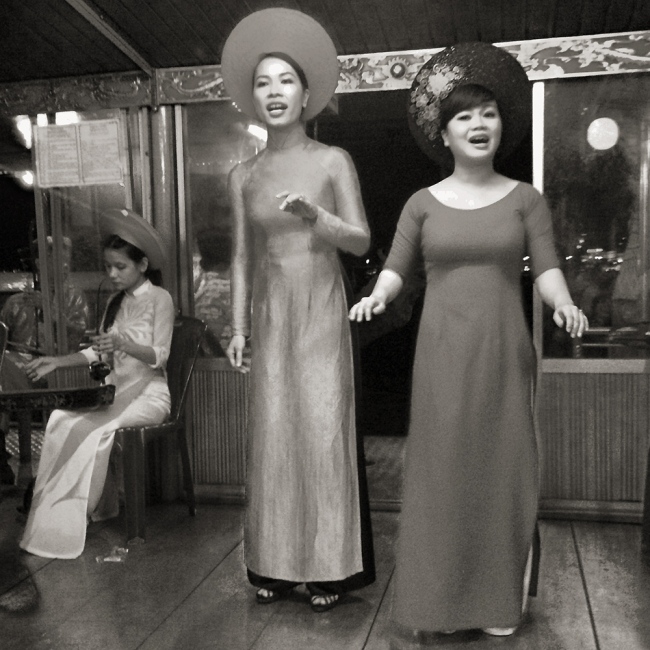 Traditional singers perform on a boat on the Perfume River in Hué, Vietnam. 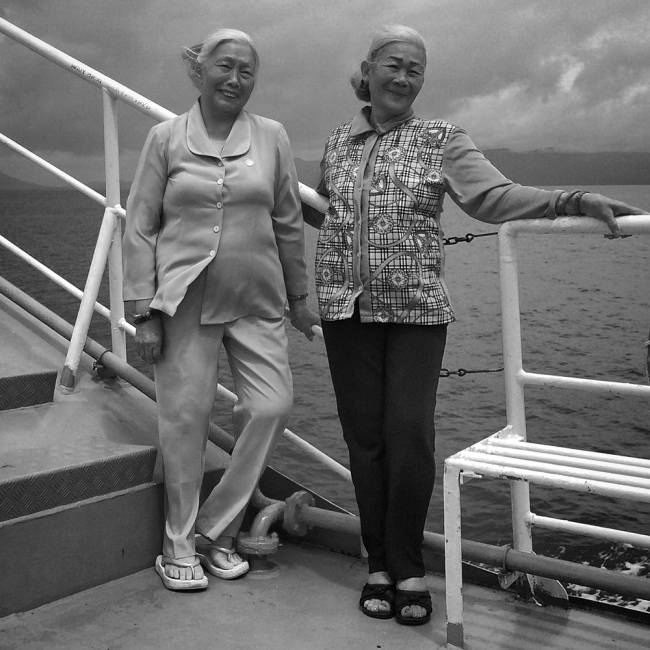 Two women on the ferry from Phú Quốc Island, off the southwest coast of Vietnam to the mainland, Mekong Delta. 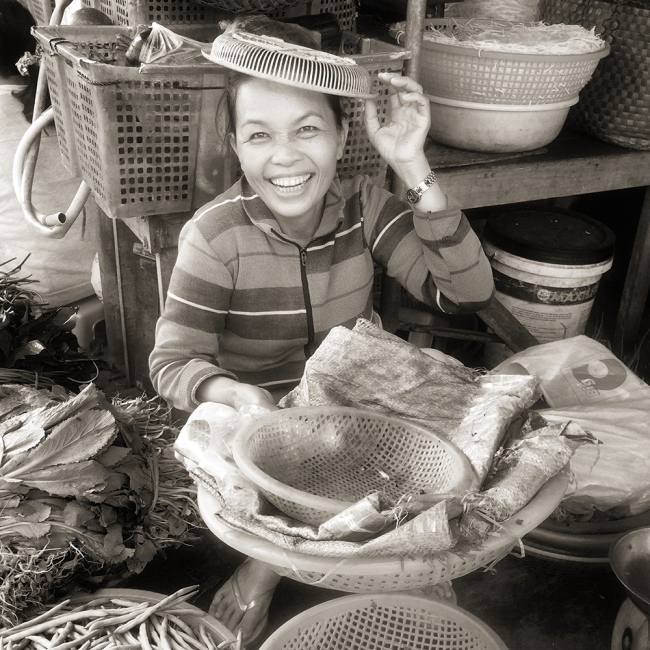 A playful women selling vegetables at the market in Hội An, Vietnam. 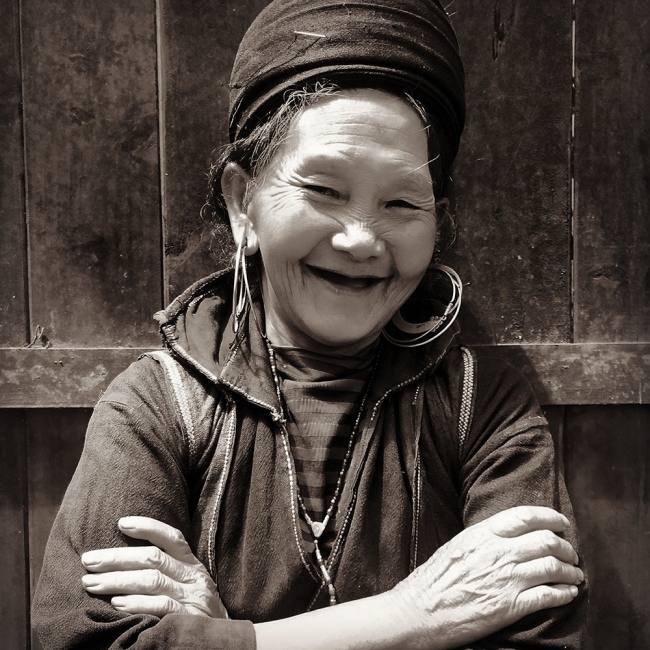 Ka, a Hmong tribe woman in the Sapa District of Vietnam, who loved to laugh. 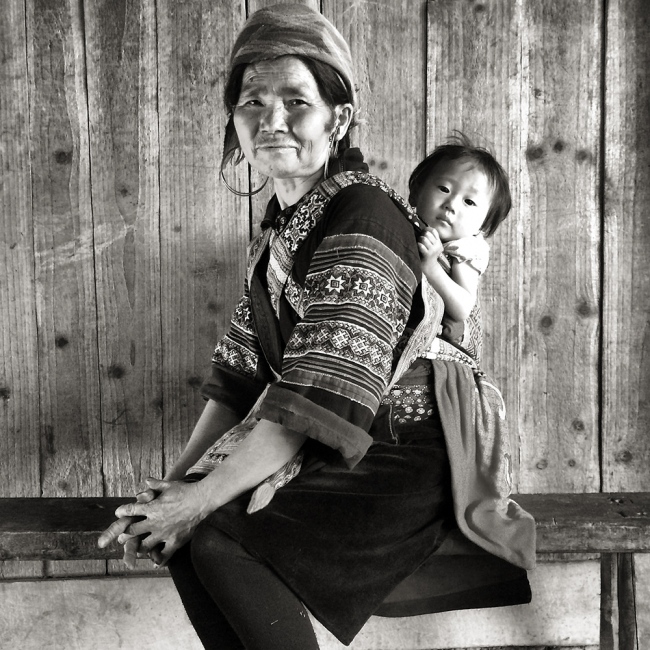 A Hmong tribe woman carries her grandchild on her back after a day of work. 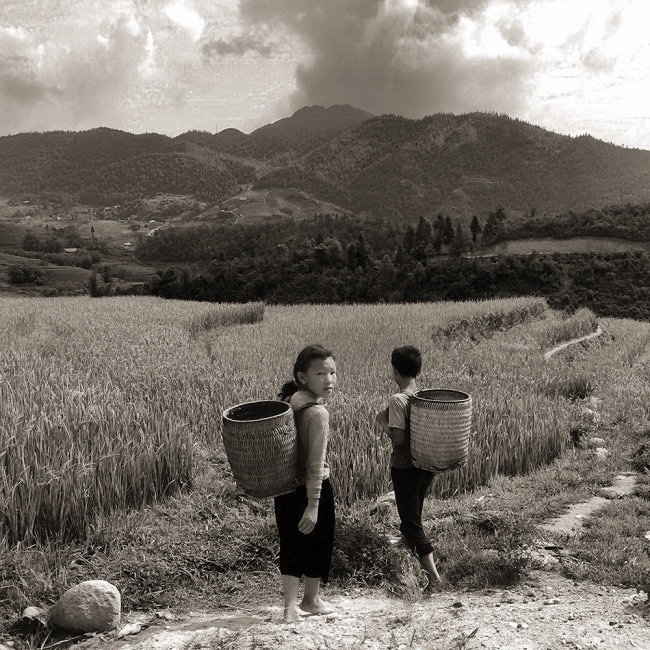 Children walking to the market through the rice paddies in the Sapa District of Vietnam. 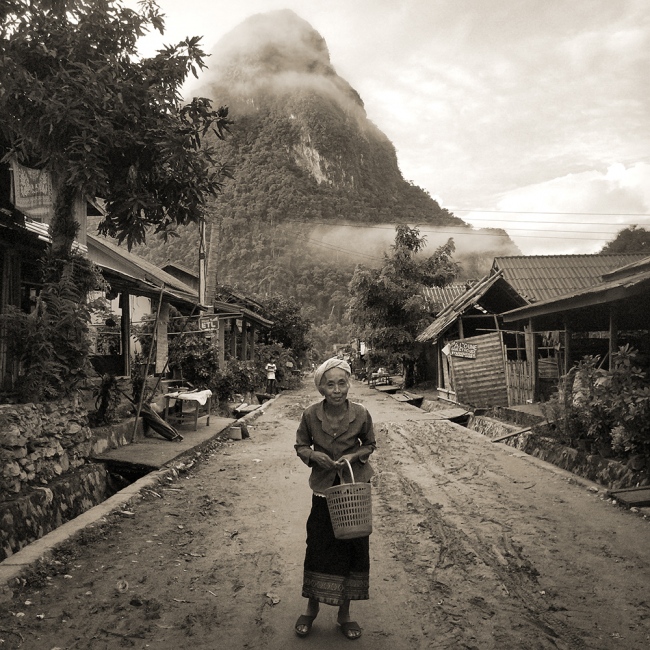 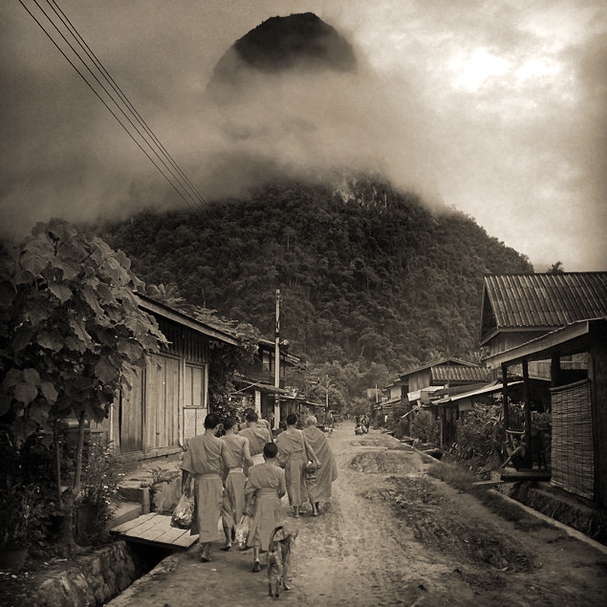 being in a place that is so foreign, so exotic, and so different

than what one is accustomed to,

that one loses one's self

For years my daughter Aissata and I had been longing to explore Southeast Asia – specifically, Cambodia, Laos and Vietnam.  We had already traveled to many different parts of the world together, yet this new territory awaited us. Finally, this past summer, our dream came true.

Aissata was studying in Paris and decided to go to Cambodia during a break in her course. I felt there was no choice but to meet her, and so we set out on a new adventure. After two weeks of travel we reached Luang Prabang, Laos, where I met a couple of young French women. We spoke about our experiences and they introduced me to a French word that I had never heard before, "dépaysant." I connected to what it expressed on a visceral level. It perfectly described many of my travels and particularly this wonderland of Buddhism, spirituality, peace and beauty. It put everything into perspective: the idea of going well beyond the mundane and living life to its fullest.

When it was time for Aissata to return to her studies in Europe, I hesitated about what to do next. Would I continue on with my travels in Southeast Asia?  It had been a while since I had ventured to a country where I knew no one, and the cultures were completely different from the ones I was accustomed to. Little did I realize that what lay ahead would provide a deeply moving and welcome experience.  I decided to stay on alone. Next stop: Vietnam.

It was monsoon season, and I arrived in Hanoi in the midst of a torrential rainstorm – a dramatic introduction, which added to my trepidation and colored my first impressions. I could not believe that I was in "Hanoi." All of my life, my reference to Vietnam was based on my recollections of being a little girl growing up in Chicago during the Vietnam War, watching the protests on the news, the 1968 National Democratic Convention, Jane Fonda, and the impeachment of  Richard Nixon. The song "Four Dead in Ohio" by Crosby, Stills, Nash and Young about the Kent State shootings kept playing in my head as I walked through the streets of Hanoi. I have been trying to understand the Vietnam War all of my life, and the more I tried to understand it, the more confused I became. It never made sense to me, nor did it make sense to many Americans.

But what I found in Vietnam with regard to the "American War," as the Vietnamese refer to it, was that, almost 40 years later, they had moved on. Their past had been plagued by war for so many decades that they simply wanted peace. What I found were people filled with gentle laughter, so wanting to please, to forgive and forget. It was if an entire country had made a collective decision to rise above the past and find peace together. I will never forget some time later, when I made it down to Ho Chi Min City (formerly Saigon), riding on the back of my friend Tri's motorbike, asking him about the separation of North and South, and if this separation still existed. Tri simply responded, "No. We are now one."  His beautiful, simple, yet well thought out words would stay with me. Suddenly, all the fear I had of being an American in Vietnam vanished.

My first day in Hanoi I discovered The Vietnamese Women's Museum. I was so excited and impressed with the idea that there was a women's museum in Hanoi. This was a true statement about their culture. I now saw the Vietnam War from a completely different point of view. The Vietnamese view. And even more, I was moved by the heroic women, and what they did to save their people and their country from the despicable. One of the permanent exhibits at the museum is called "Women in History." It depicts the role of Vietnamese women, defending their country from 40 A.D. to the present, with special concentration on the period of the American "Destructive War." In the South, women led the resistance, accounting for 40 percent of the guerrilla and militia forces. They worked as intelligence agents, were locked in "tiger cages" and tortured as prisoners.  While in the North, over 60,000 women repaired roads after bombings. They contributed to the construction of the Ho Chi Minh Trail and helped build the underground network of tunnels that housed and gave shelter to thousands of people.

On a more colorful note, another permanent exhibit at the museum is "Women's Fashion," which appealed to me since I started my career as a fashion photographer. There are 54 ethnic groups in Vietnam, each creating their own style of dress with indigenous fabrics, such as cotton, natural silk and indigo-dyed hemp. Each of these styles define and characterize a tribe with intricate embroidery, complex sewing techniques, batik, and appliqué. Women adorn themselves with jewelry, hair ornaments and headdresses, and some shave their heads. They express themselves and celebrate their femininity with hundreds of years of tradition as walking works of art.

This was a turning point in my Southeast Asian Odyssey, as it took on meaning at a deeper level and with a new direction.

This new direction lead me to the northwestern district of Sapa, where I met, photographed, and exchanged personal stories with the ethnic H'mong and Dao tribe women. I was photographically seduced with their very intricate costumes, curious and amazed by their rough mountain living conditions and lifestyle. I was hungry to know all that I could about them. One encounter that I had with a group of H'Mong women when I was taking their portraits was particularly powerful. While we were waiting for a cloud to cover the harsh midday sun, we conversed, eager to find out more about one another. As eager as I was to know about them, they were sincerely interested to know all about me.  As a woman traveling alone, I was constantly being asked why I was on my own, and if I was married - so when I opened up to them, and told them all about my personal life, they wanted to converse even more, sharing their stories with me. One woman told me that she and her husband had separated because he was seeing another woman - a younger woman. With this, we had crossed a bridge to a more intimate communication, and found a rich and soulful connection…  And as I looked out to the terraced rice paddies in the distance, I realized that, in the end, no matter where we come from, north, south, east or west, as women, universally, we share many of the same feelings and experiences with regard to family, work, men and other aspects of life.

As I continued my mission to document these fearless women, my route took me on and off buses, night trains, and motorbikes to central Vietnam, the cities of Hué, HoiAn, and then further south to Ho Chi Min City. I finally made it down to the Mekong Delta, where, I met Ms. San, a travel agent who,like me was a single woman, alone, getting on with her life and her business - that she loved. She told me that she had an Australian boyfriend who would visit her and she him, in Australia from time to time, and when I asked her why she did not go to live in Australia with him as women were "supposed to." She responded quite confidently that she loved her life, her work, her friends and basically, living alone in the city of Chau Doc, Mekong Delta. I could not have agreed with her more. Though we were from completely different backgrounds, 9000 miles and cultures apart, we connected - as independent women.

Sadly, after two and a half months it was time for my journey to come to a close. Someday, and I hope soon, I will return to this dépaysant country, where I was truly embraced by this land and its people, to carry on with this story and lose myself again. When I arrived back to JFK Airport, the Uber driver who picked me up asked me where I was coming from. When I told him Southeast Asia, he told me that he was a Vietnam vet. He said that he was drafted and had to go, but was never really sure why he was there. I could barely process what had just happened, and then I remembered the quote by Aristotle, "We make war that we may live in peace." I never quite understood it, until that moment. Although our countries had been at war, we found a peace that connected us and transcended the past.

Hommage to my husband, Alpha Touré

By Cheryl Koralik — EXPLORING THE DOGON by CHERYL KORALIK In August 2001, I decided it was time to explore Mali and continue my..
Jan 26, 2014