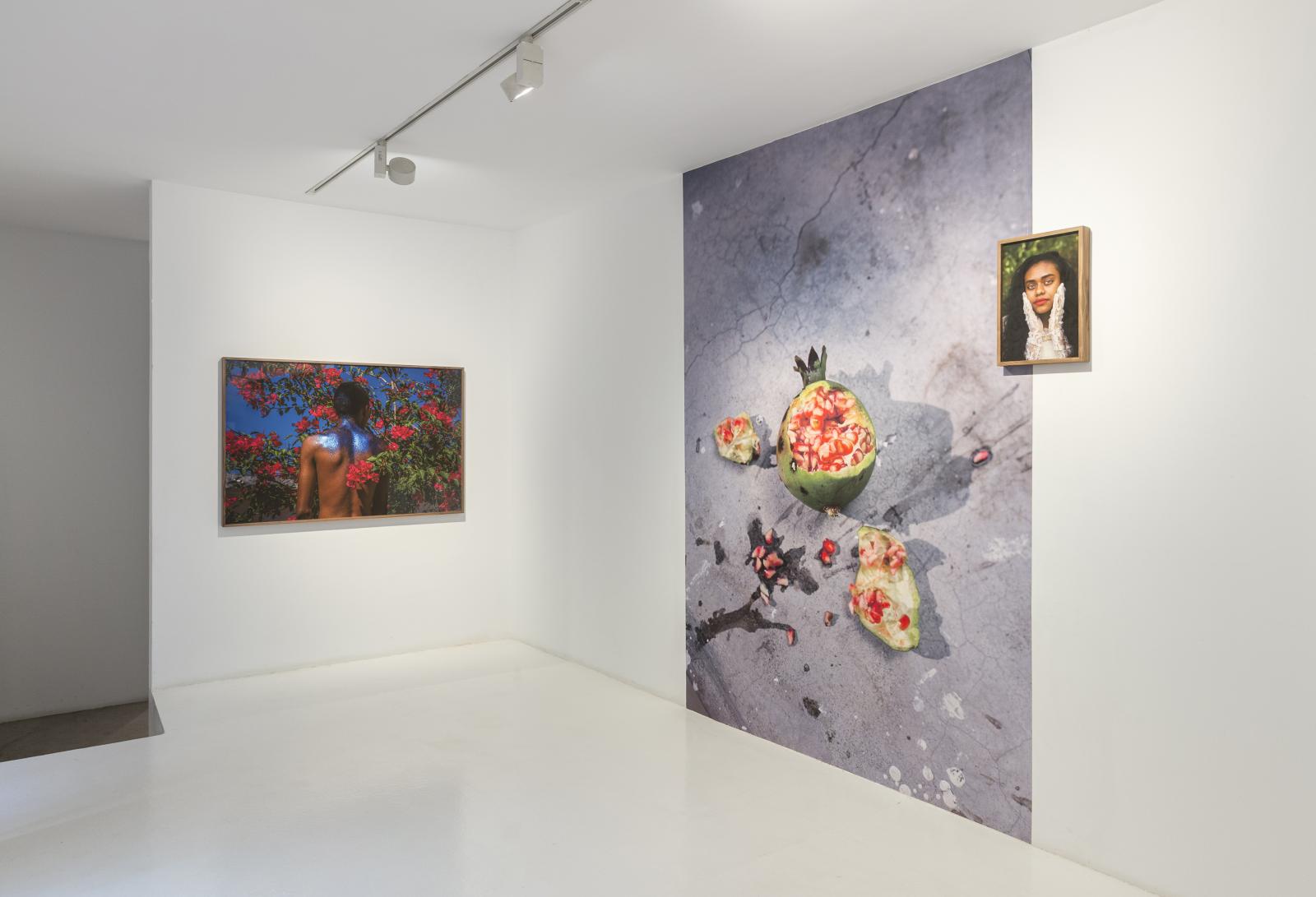 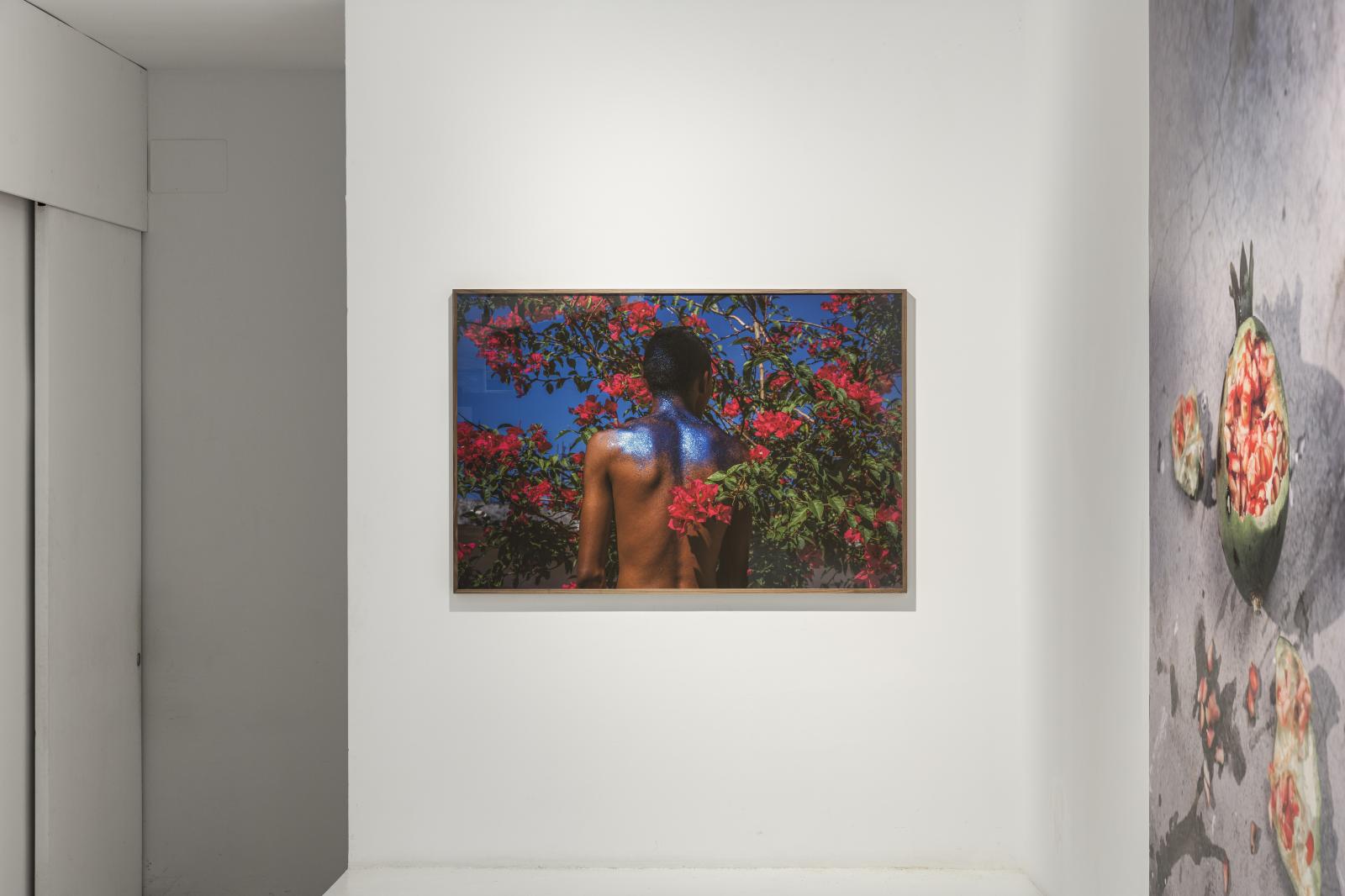 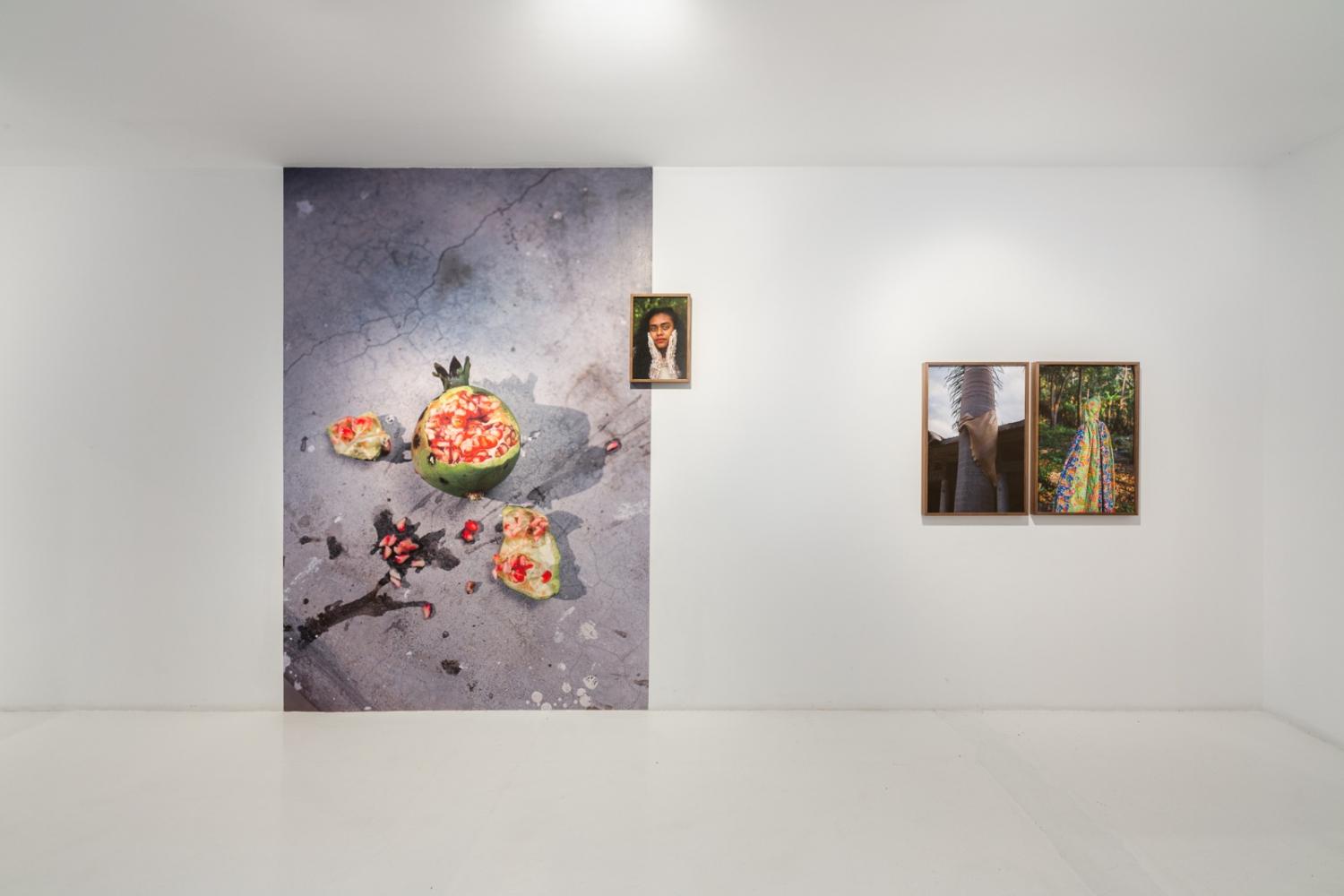 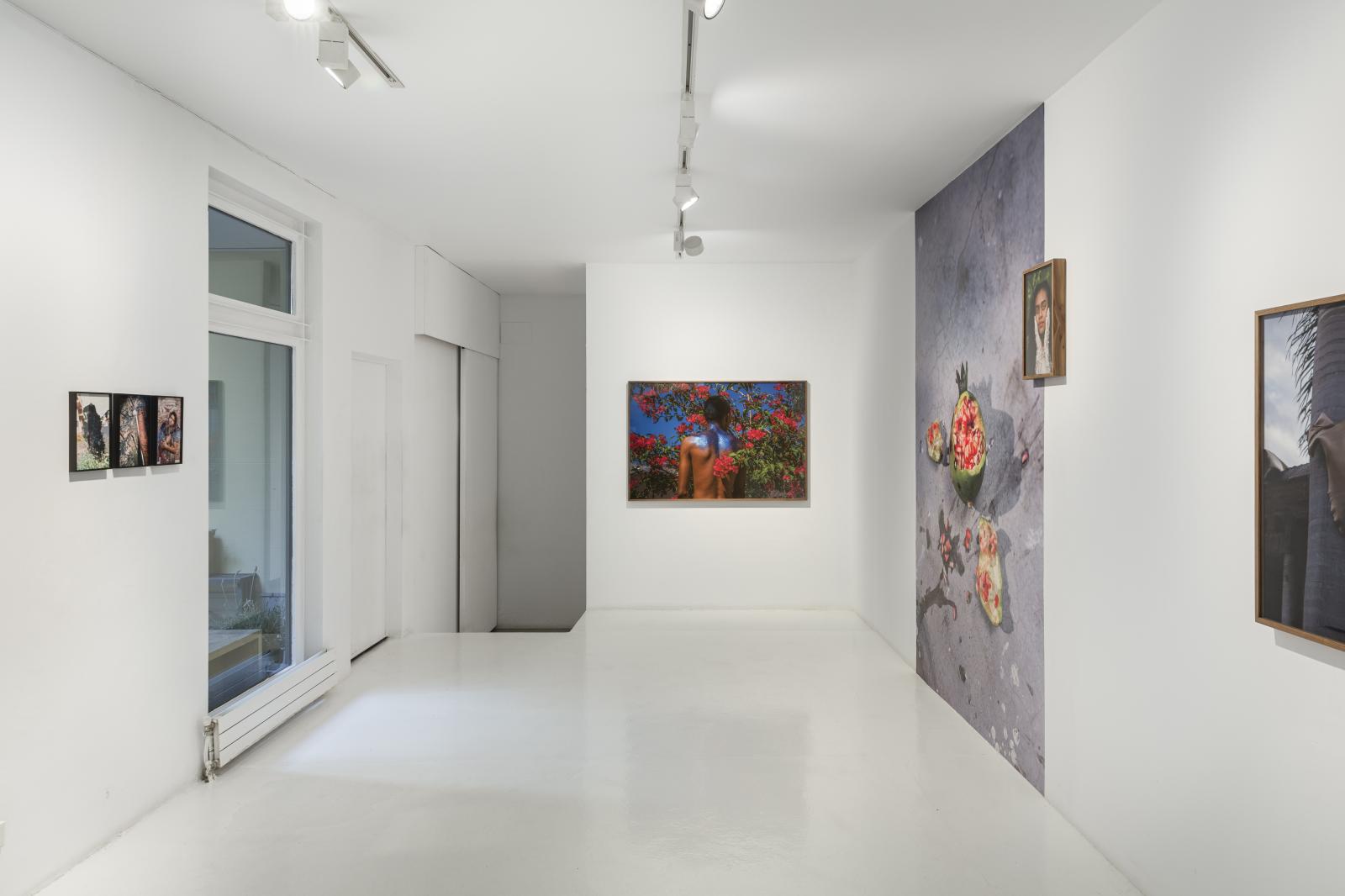 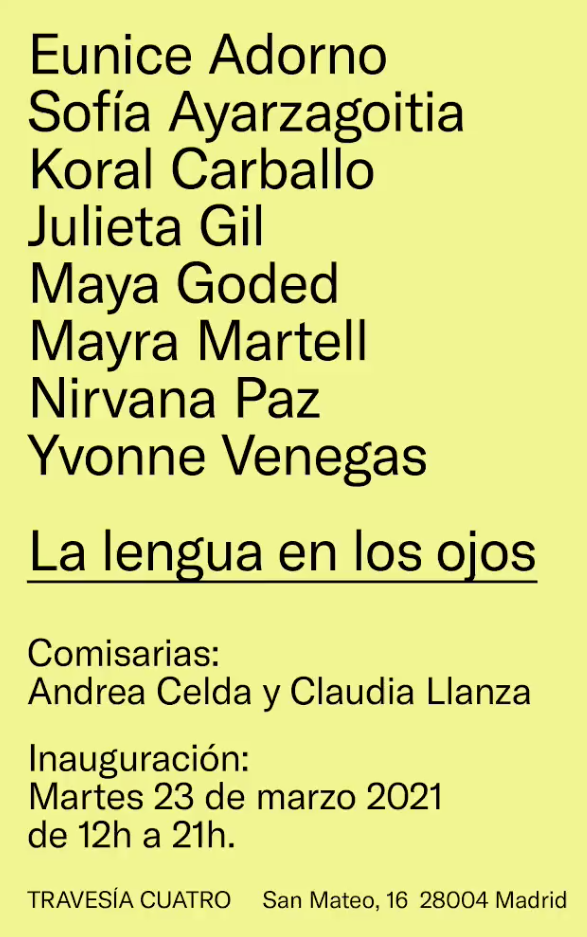 La Lengua en Los Ojos generates an imagination constructed by the gazes of eight Mexican artists and their stories created in different times and places. These "eyes that look" are "the hand that writes" when Margo Glantz vindicates the figure of Malinche in her essay La Lengua en la mano. Malinche, Malinalli, Malintzin or Doña Marina was a historical and mythologized Nahuatl woman, whose job was that of "tongue" - interpreter - for the Spaniards during the colonization process. A character who creates and leaves her mark through her voice - her language - despite appearing in the chronicles of the time as a body interposed between the official interlocutors - the men - and identified with treason.

The exhibition proposes a journey through the spaces in which the body resonates, alluding to the geographical, socio-political and historical context that engendered it. Here, space, both public and private, is an active agent in the lives of those who look or are looked at, of the trace we leave in it, the silences it keeps, the bodies it limits and defines, and the absence of them.

Thus, Eunice, Julieta, Maya, Nirvana, Mayra, Yvonne, Sofia, and Koral place us on the edge of our own borders. Together they form a landscape of voices that continues to fight for spaces where safety and representation are guaranteed. What each one begins as a gesture of individual exploration of female sexuality, of origins, of the margins, around the lives of missing women, ends up becoming a process of empathy, denunciation, healing, and regeneration that allows them to take ownership of these stories through photography.

Welcome to Intipucá City Proyect on We, Women's The Power of We in New York, NY Exihibition

By Koral Carballo — Welcome to Intipuca City Project is already under the Brooklyn Bridge along with incredible works that make..
Jul 15, 2021

Workshop Results 'This is NOT a pipe, rethinking contemporary documentary photography' in Mexico City.

By Koral Carballo — This blog contains the results of the workshop "This is NOT a pipe, rethinking contemporary documentary..
Jul 9, 2021

By Koral Carballo — Very happy to be part of the 2021Catchlight Leadership Fellowship Program! During this fellowship I will..
Jun 8, 2021

Mystery of the Disguise and Ãlbum Exhibition in Coyolillo, Veracruz, México

By Koral Carballo — As part of the project "We were always here" two exhibitions will be held in the Afro-Mexican..
Mar 25, 2021

By Koral Carballo — The prologue "The Mystery of Disguise" from the long-term project We Were Always Here was selected..
Jan 27, 2021

By Koral Carballo — I am very happy that the prologue "The Mystery of Disguise" of my long term project "We were..
Jan 19, 2021

By Koral Carballo — Curated By Shuran Huang For The Visura Media Blog As we welcome 2021, Visura is delighted to highlight..
Jan 2, 2021

By Koral Carballo — Today is online the official selection of the "Casas de Abuelas" contest, organized by Paz..
Dec 29, 2020

By Koral Carballo — (Español abajo) Today I'm opening my website. I would like to thank Adriana Letorney from Visura..
Dec 16, 2020

By Koral Carballo — Very happy to share that a photo of my process this year of reunion with my family, ancestors and our..
Dec 11, 2020

By Koral Carballo — We’re pleased to announce new projects by our 2020 grantees documenting the impact of the global..
Nov 25, 2020

Publication. The dreams that don't fit in your ballot box on Anfibia Magazine

By Koral Carballo — To seek his re-election Donald Trump appealed to the construction of walls, to nationalism and to the..
Nov 5, 2020

By Koral Carballo / Paris, France — ...] The astonishment, when it seizes us, isolates us and prevents us from thinking. It throws us violently..
Sep 27, 2020

By Koral Carballo — Photographers across Mexico have been documenting the challenges of distance learning Schools in China..
Sep 29, 2020

By Koral Carballo — I am very happy that my work will be screened at the Tbilisi Photo Festival with the project "We were..
Sep 8, 2020

Assignment. This is not a chain by Ruda Colectiva on Planeta Futuro - El PaÃ­s.

By Koral Carballo / San Andrés Cholula, Puebla, México — The impact of the crisis of the covid-19, told from the perspective of 11 women photographers in different..
Sep 3, 2020

By Koral Carballo — I participate in the online exhibition of Foto Féminas with my work "Casa Tomada". This..
Aug 25, 2020

By Koral Carballo — The Darryl Chappell Foundation , a Washington, DC headquartered private nonprofit, is partnering with the..
Aug 17, 2020

By Koral Carballo — A project carried out jointly by women photographers from different parts of the region, within the..
Aug 17, 2020

By Koral Carballo — In Veracruz there is a town famous for its carnival. It is called Coyolillo and is one of the few..
Aug 17, 2020