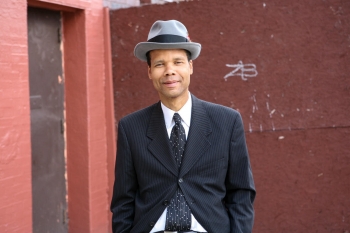 He is the founder of The Tate Group, a Brooklyn, NY–based consulting firm that specializes in strategic marketing, public programming, community engagement, critical analysis, and partnership development. Economic growth and narrative change around issues of equality are at the core of its practice.

He advises institutions that innovate in the arts, media, philanthropy, economic development, and urban revitalization on ways to deepen their social impact. He also collaborates with grassroots organizers on strategies to bolster democracy across communities.

His marketing work taps the mythic narrative of a given place, issue, or brand. His public programs imagine the future while lifting up the revolutionary history of people of color and people of conscience. The work engages communities across intersections of race, ethnicity, gender, ability, and age.

Tate is former executive director of the DC Committee to Promote Washington, a nonprofit organization that marketed the Nation's Capital around the world. Taking on the role when the city’s image was at its lowest, he transformed the office into an entrepreneurial marketing agency that generated $93M per year in visitor revenues.

A skilled negotiator, Tate has struck major pacts with AT&T, Bloomberg, NBC, Target, Visa, and others. He has also created singular marketing strategies for Broadway, Brooklyn, Queens, and numerous nonprofits. He lives in Brooklyn, NY with his wife and daughter.