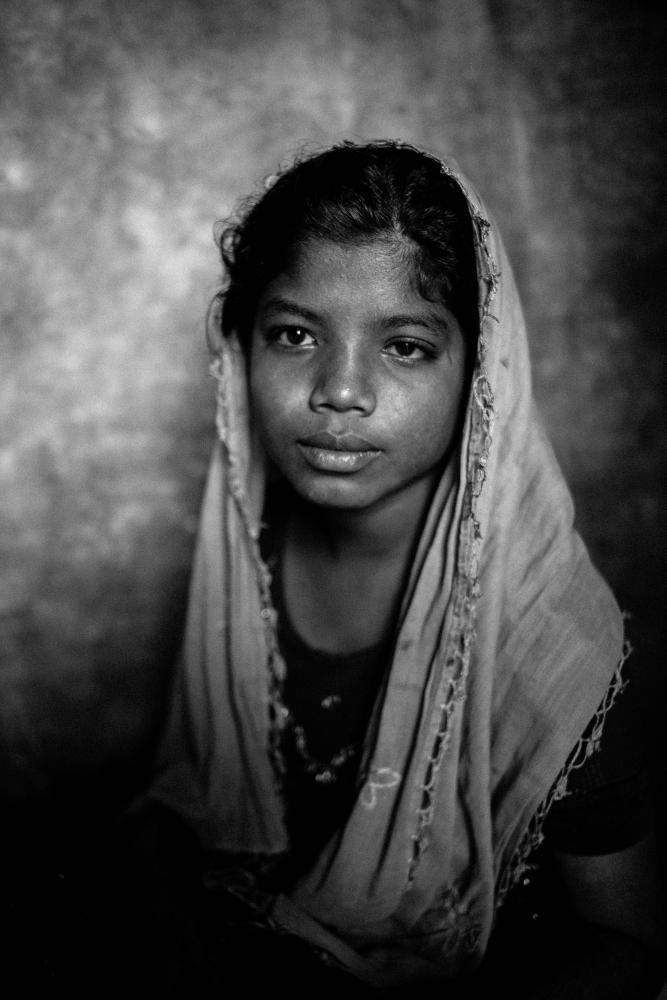 1 of 8 © 2020 Bethanie Mitchell
Alkama Bibi, 13 from Haw Ru Tu Lar in Maungdaw Township Myanmar displays a gunshot wound, which left her with a scar and an enlarged left knee that causes her to limp. On a Friday, after prayer, the military and Rakhine villagers entered her village. They asked no one questions and started to open fire on the villagers. Her father and younger sister were shot dead in her room in front of her. Alkama's uncle took her from the house and they tried to escape. While fleeing, a bullet hit her in the back of her knee and flew out the front. Her uncle carried her to another village where she received medical care for nine days. After basic treatment they crossed the border into Bangladesh. 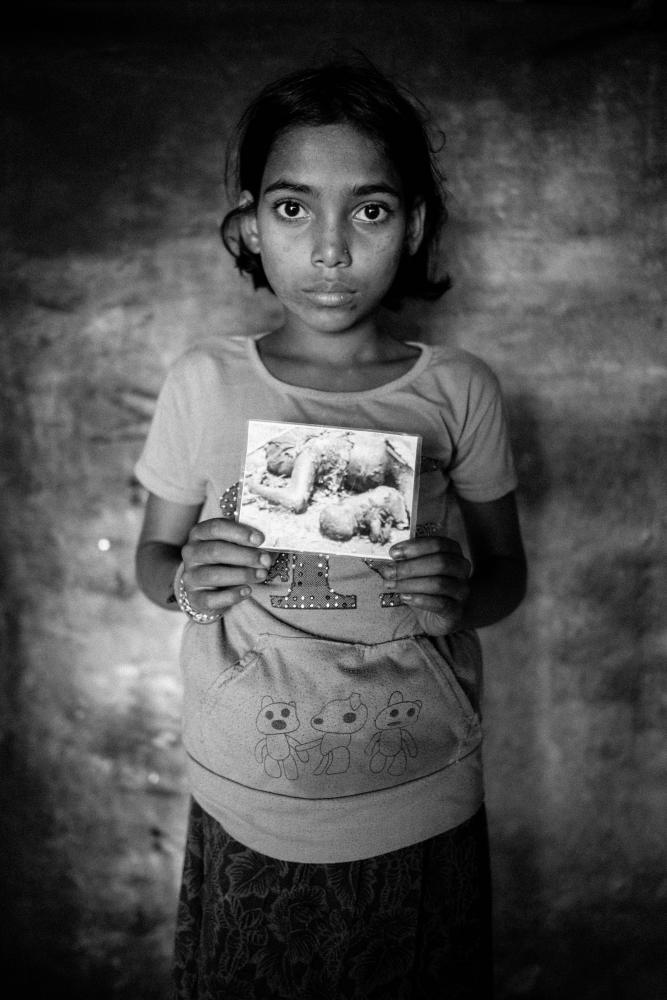 2 of 8 © 2020 Bethanie Mitchell
Ajda Bibi, 10 from Fokhali village, Maungdaw township in Myanmar.  The Myanmar soldiers shot her father and little sister in the head and Ajda doesn't know what happened to her mother. Those that fled the village were shot at by the military and Adja suffers from shrapnel wounds on her leg. The photo she holds in the portrait was given to Ajda by a neighbor who returned to Fokhali after the attack and took cell phone photos. The photographer told her the image depicts Aida’s father and younger sister in front of her former home. 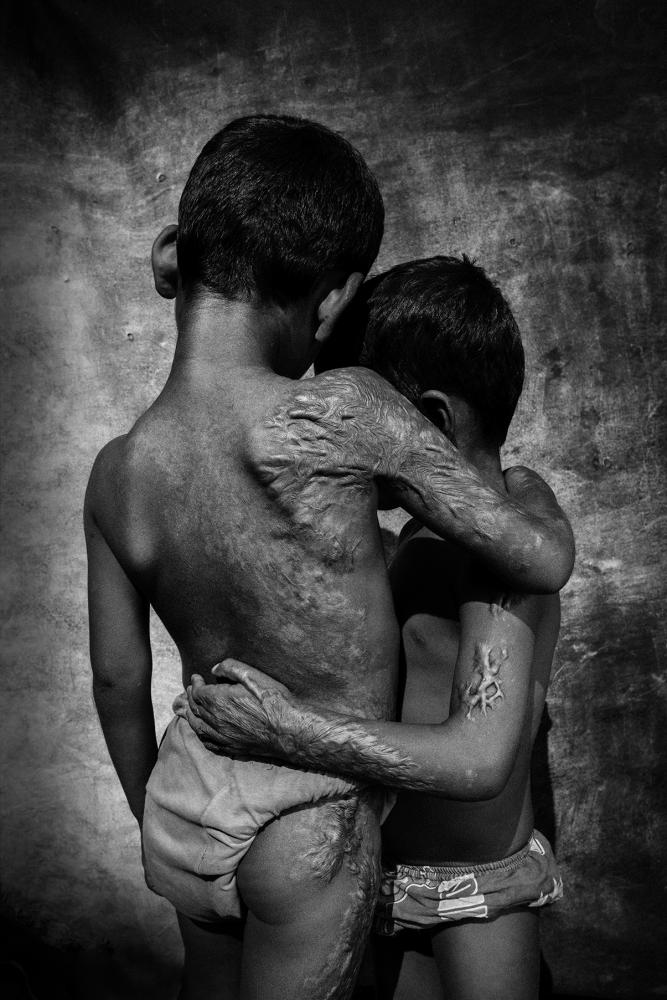 3 of 8 © 2020 Bethanie Mitchell
Mohammad Haror, 6 (left), and his brother Mohmmad Aktar, 4. The brothers are from Fokhali Village in Maundaw Township, Myanmar. In the early morning, local Rakhine villagers and the Myanmar military came to Fokhali and burned it to the ground, along with the mosque. Women from their village were gang raped and the village imam was killed. The boy's mother was carrying water from the well when she looked back and saw her home on fire.  She ran to try and rescue three of her children who were inside. One died, but the two brothers pictured were able to escape, while suffering severe burns.   Their father had been arrested in 2015 and hasn't been heard from since.  Despite the family's terrible experience the mother said they would return to Myanmar if the government recognizes the Rohingya as citizens. 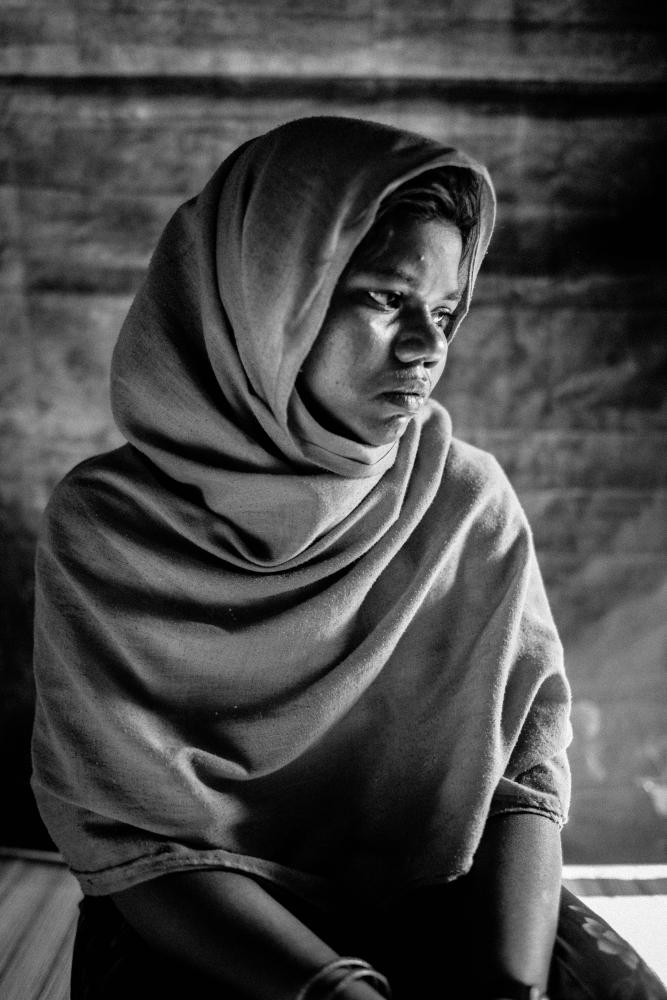 4 of 8 © 2020 Bethanie Mitchell
Minawara Begum, 15, from Tula Toli village in Myanmar. Myanmar soldiers came to her house raping her, along with her mother and sisters. They torched her family home where her mother and two sisters were burned alive. She managed to escape, but was shot twice in the backside while attempting to flee.   After making it to the forest, a group of Rohingya men helped her to cross into Bangladesh where she received medical care. 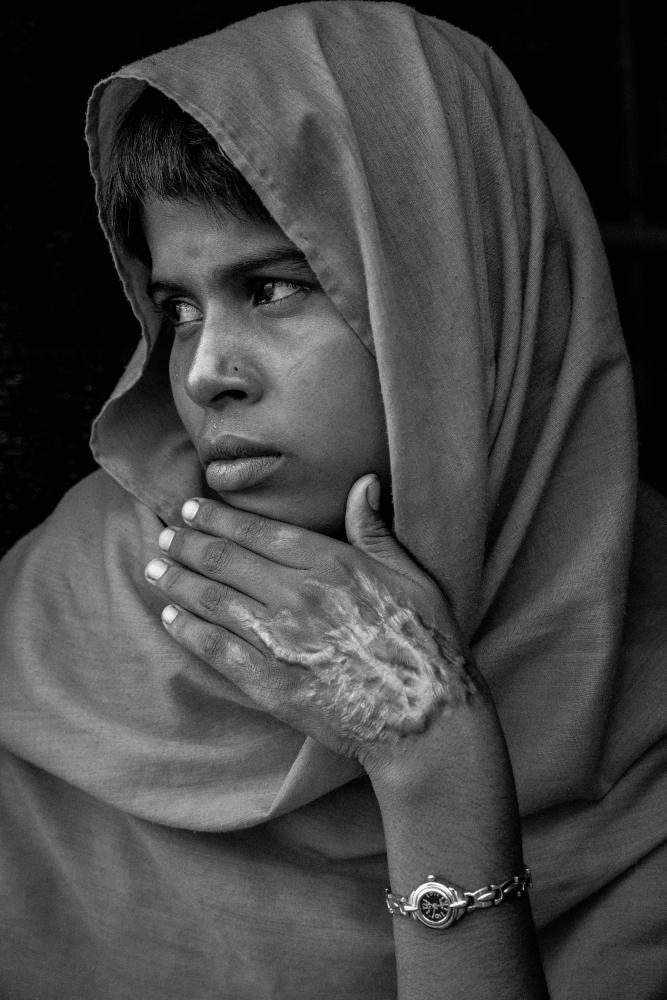 5 of 8 © 2020 Bethanie Mitchell
Shafique Begum, 15, from Tula Toli village in Maungdaw Township, Rakhine state of Myanmar. The Myanmar military killed a total of 21 members of her family. Her parents, 5 sisters, and four brothers were all killed. Along with her immediate family, her sister in law and her children and parents were murdered as well. She suffered severe burns after her home was set a blaze by the Myanmar military and is the sole survivor of her family. She lives in Balukhali refugee camp with a woman from her village who agreed to take her in. 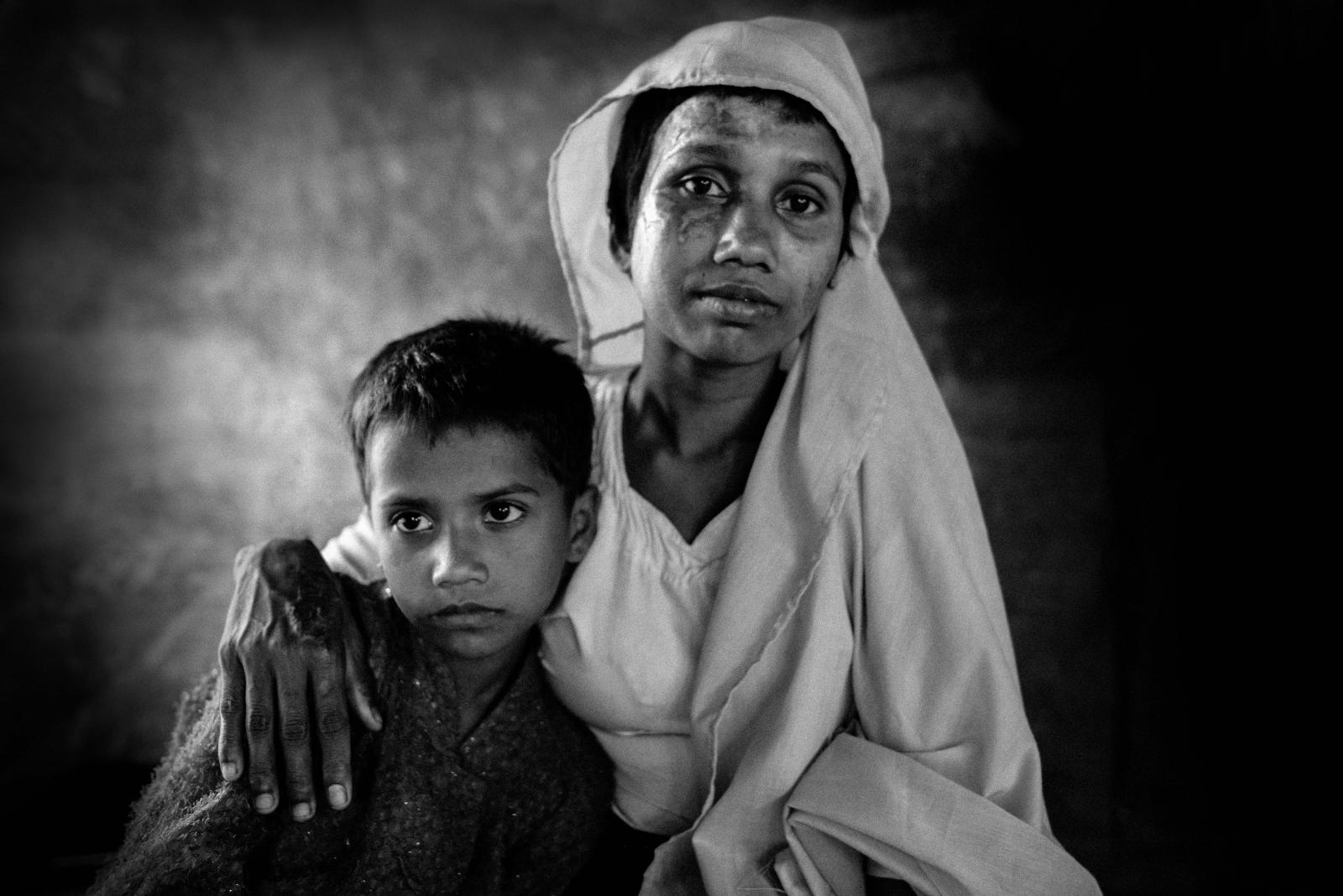 6 of 8 © 2020 Bethanie Mitchell
Mumtaz Begum, 30, from Tula Toli village in the Rakhine State of Myanmar is pictured with her only remaining child.   When her village was attacked the Myanmar military killed her two year old daughter and husband.  After the soldiers raped her, they started her home on fire.  Though suffering severe burns she was able to escape.  She was found in the forest by a group of people who helped her to cross into Bangladesh. 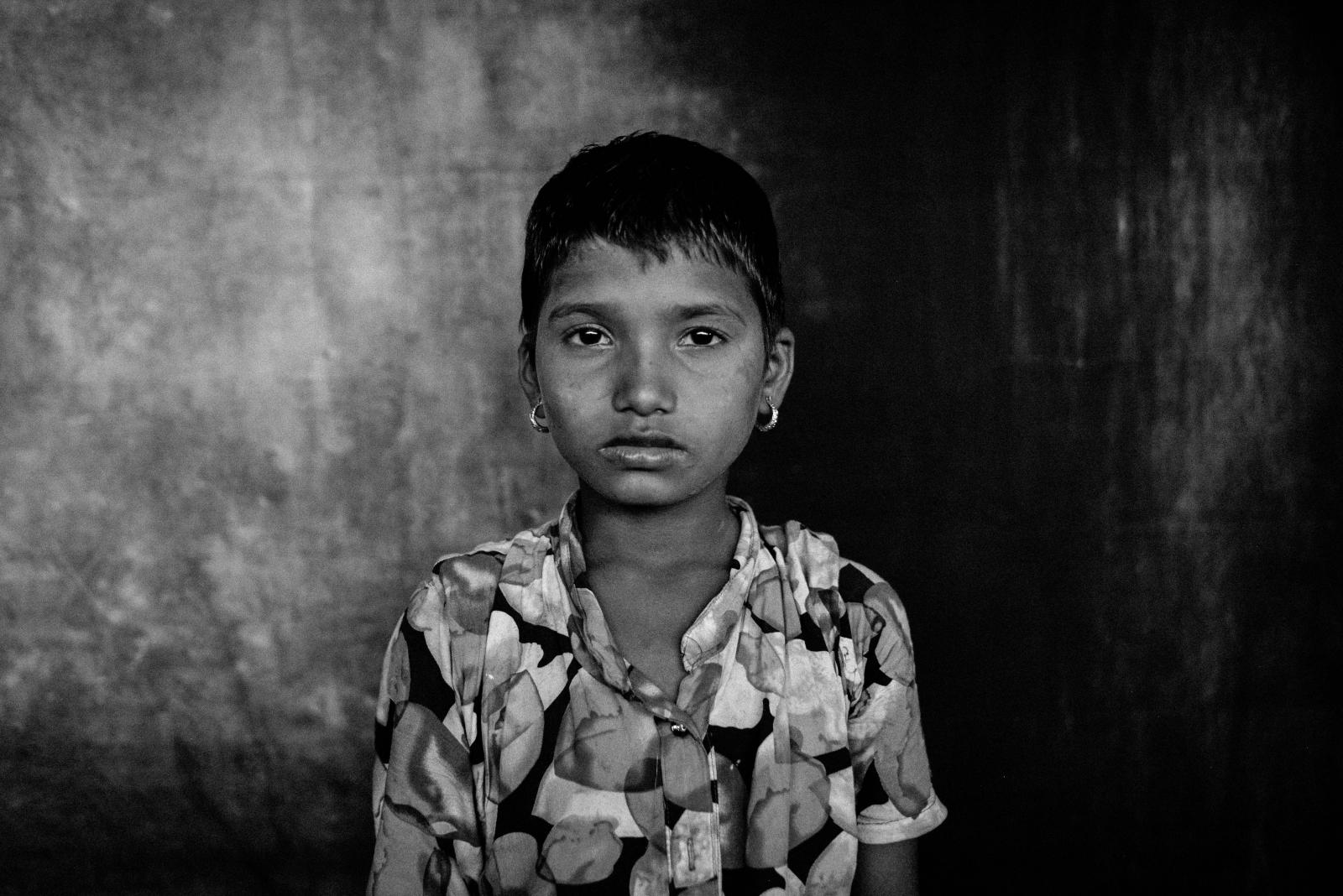 7 of 8 © 2020 Bethanie Mitchell
Nur Kalima, 10, from Tula Toli village.  Her mother was mother was one of the many victims of sexual violence by the Myanmar military and her father was shot and killed.  Nur was beaten with a stick by a soldier till she went unconscious and thinks she was sliced with a knife.  After she awoke, there was a large gash on the top of her head. 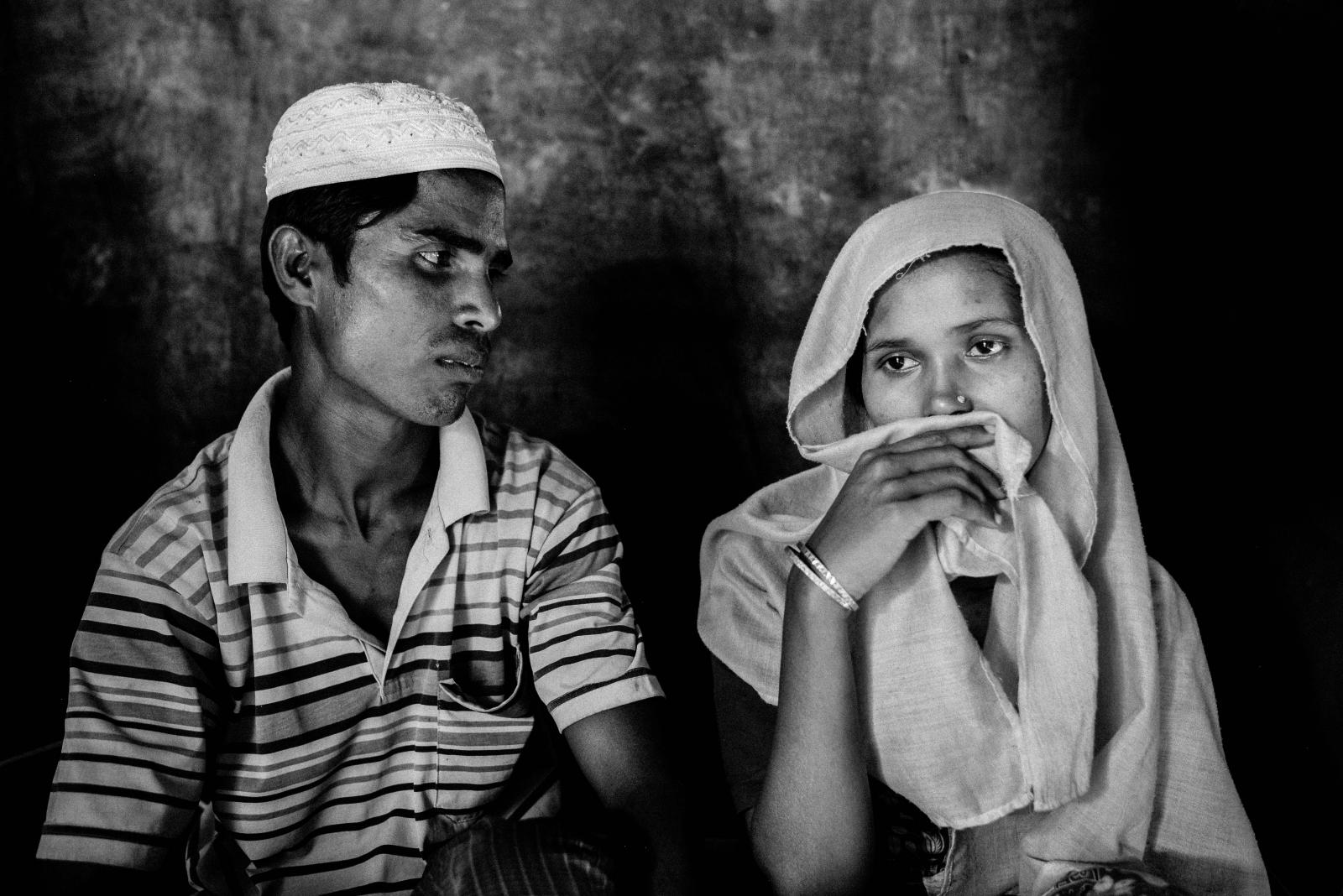 8 of 8 © 2020 Bethanie Mitchell
Mohammed Hossain, 25, and Rashida Begum, 23, husband and wife from Tula Toli village.  The village of Tula Toli was burnt to the ground with men being killed and dumped in a mass grave and many women subjected to sexual violence.  Rashida was raped by Myanmar soldiers and also suffered having her throat sliced open.
Public Story
Survivors
Credits: bethanie mitchell
Date of Work: 01/01/19 - 01/01/09
Updated: 12/13/19
Archived as:  Black and White, Documentary, Photography, Portraiture

Since the beginning of August 2017, more than 600,000 Rohingya from Myanmar have crossed into Bangladesh. The Rohingya, an ethnic minority who have resided in Myanmar for generations, have long been considered immigrants from Bangladesh by the Myanmar government. Denied citizenship and vulnerable to abuse, the United Nations considers them to be the world’s most persecuted minority. The United Nations Secretary General Antonio Guterres declared, “The situation has spiraled into the world’s fastest developing refugee emergency and a humanitarian and human rights nightmare.” Mass rape of women and girls has been reported by Rohingya who have fled their villages in the Rakhine state of Myanmar. Victims also report wide spread torching of villages along with executions. Children were not spared abuse and murder by Myanmar soldiers. Most recently, Major General Maung Maung Soe of the Myanmar army has been sanctioned by United States for leading one of the most brutal attacks that occurred in the Rakhine state village of Tula Toli. Those that were able to flee Myanmar have shared their stories with me; allowing me to photograph them in the intimacy of their refugee camp tent.

By Bethanie Mitchell — Antara is a personal visual monograph that tells the story of my half Burmese son's Buddhist initiation..
Jul 2, 2020

Winter Swimmers of the Salish Sea

By Bethanie Mitchell / Seattle, Washington — Lord Bryon, the prolific writer of the early nineteenth century wrote, “The great art of life is..
Mar 17, 2020

The Impact of ISIS in Iraq

By Bethanie Mitchell / Bangladesh — Bangladesh is the only Muslim country in the world where prostitution is legal and it is also home to one of..
Dec 12, 2019

By Bethanie Mitchell / Athens, Greece — At St. Nikolas Church in Athens, Greece, a community near the Acropolis gathers to celebrate the last day of..
Dec 12, 2019