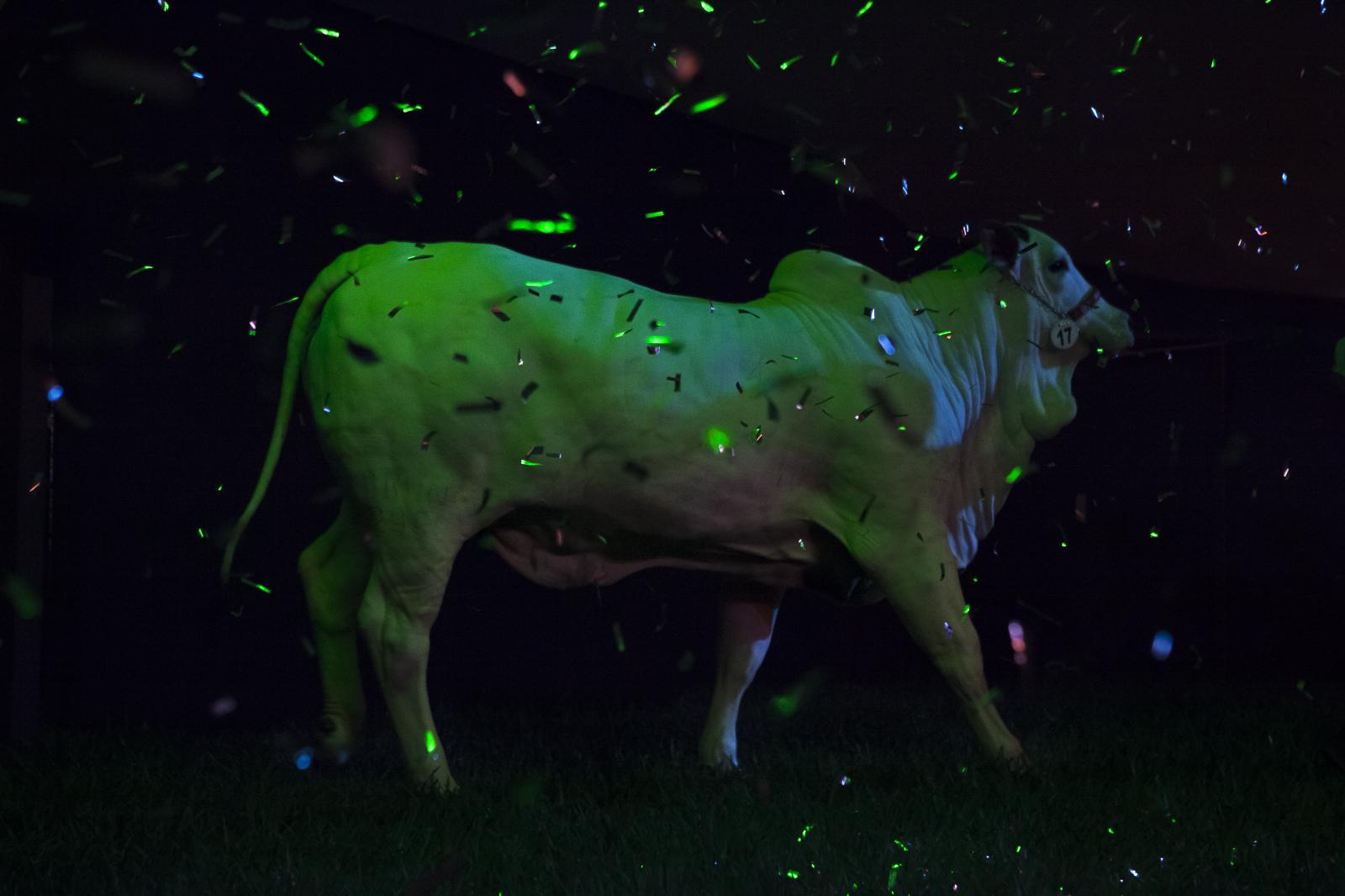 1 of 18 © 2021 Carolina Arantes
Female calf enters an auction during ExpoZebu Cattle Fair. By the time, the animal was sold for almost US$ 1 million dollars. A price that indicates the animal quality on genetic material. Uberaba, Brazil, 2013 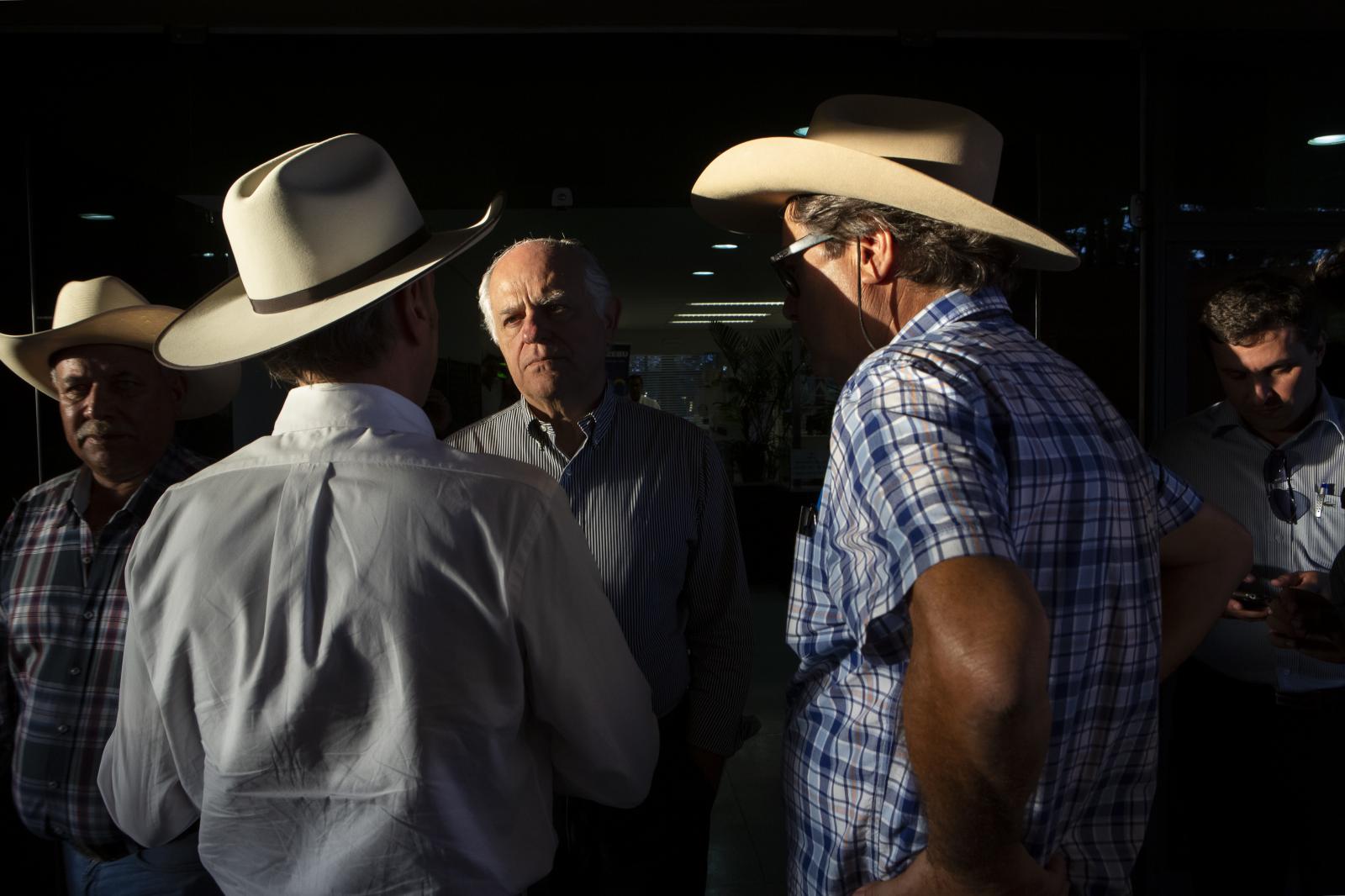 2 of 18 © 2021 Carolina Arantes
Mr. Pimenta da Veiga, ex former Minister of Communications during the ex-president Fernando Henrique Cardoso government, visiting the headquarters of the Brazilian Association of Zebu Cattle Breeders on the eve of the presidential elections of 2014. Mr Pimenta da Veiga was working in a lobby to the candidate Aécio Neves who had, later, lost the elections and was taken out of politics for being linked to serious corruptions investigations. Both politicians are part of the right wing party, PSDB, and have a long and historical relationship with the cattle farmers of the region. Uberaba, Brazil, 2014 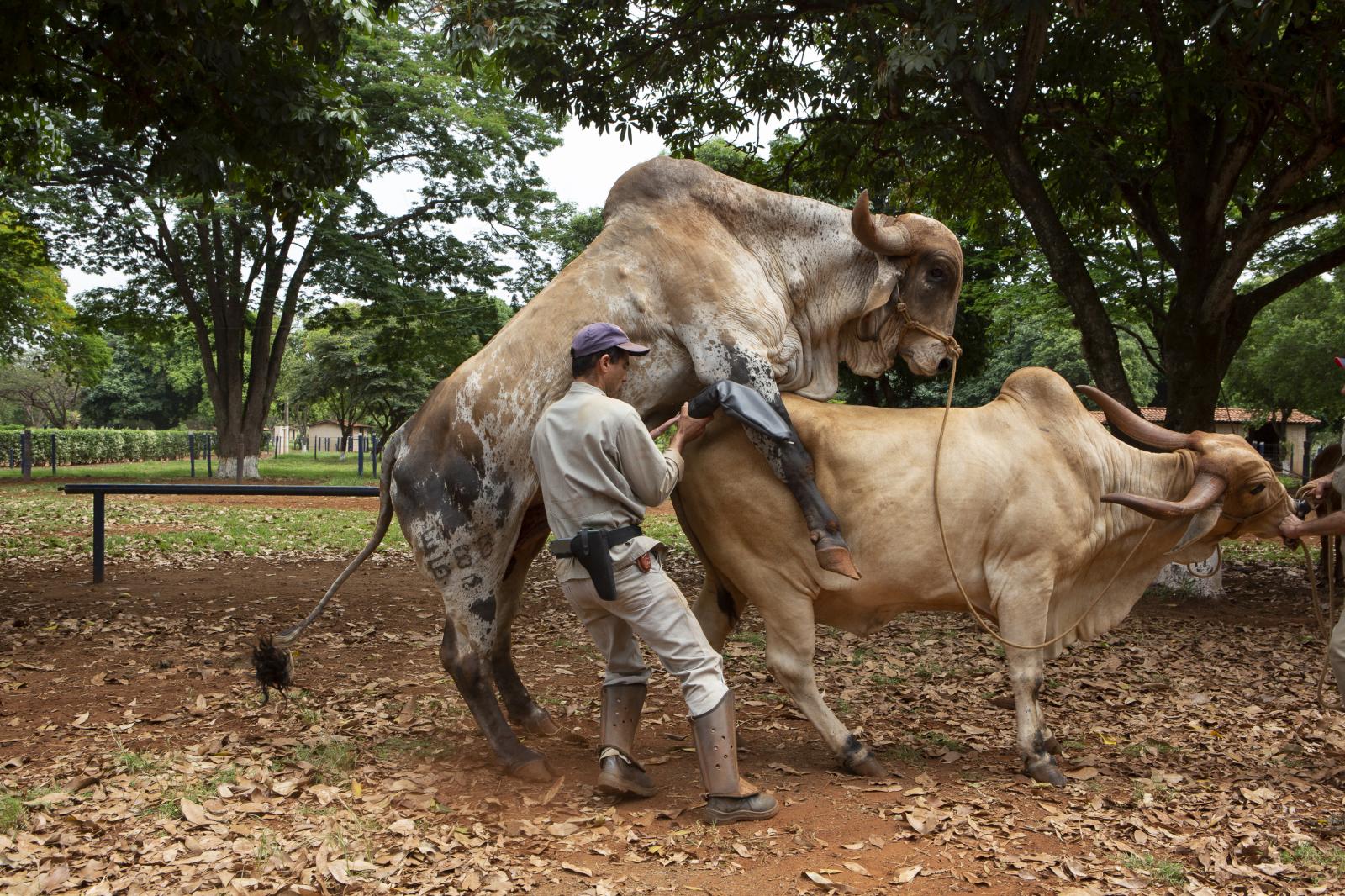 3 of 18 © 2021 Carolina Arantes
A laboratory collector collecting semen at ABS PecPlan, a leading international laboratory of bovine genetics. The genetic materials are an important part of the meat industry, not only for the value on breeding and race development but also for being itself a product and moving a commerce whose sales are important source of income for farmers. Uberaba, Brazil, 2015 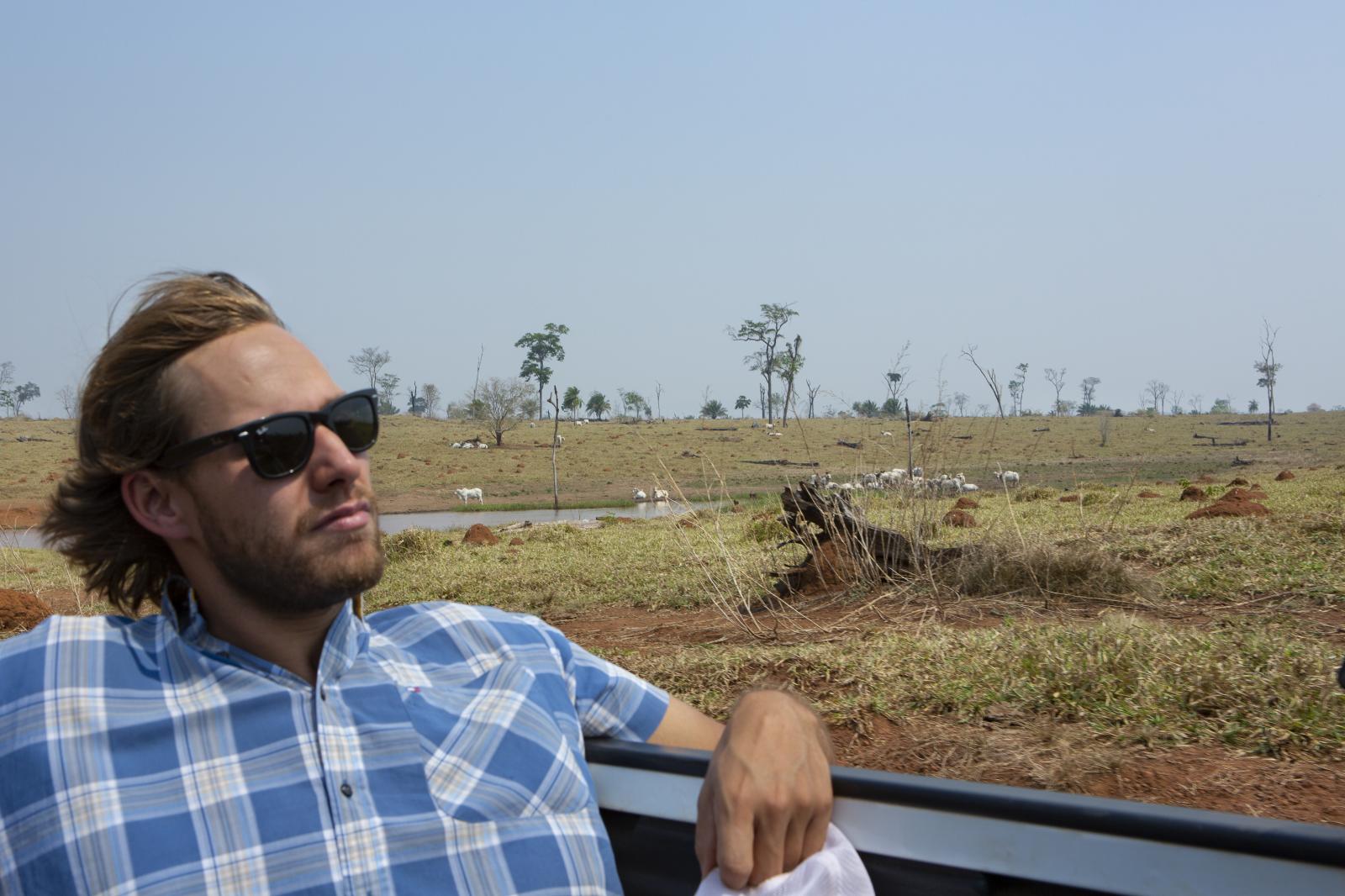 4 of 18 © 2021 Carolina Arantes
Rodrigo Rodrigues da Cunha, 27 years, the young financial manager of his familiar agro-business company, visit a 38 thousand acres farm in Mato Grosso recently acquired by the group. Three generation running the cattle businessiness in the country, the Rodrigues da Cunha family is one of the most traditional Brazilian livestock farm workers in the country, and one of the first to bring cattle from India at the beginning of the 20th century. During the 80's his grand father, Antonio Ronaldo, went to Mato Gross region to deforestate and create farms where it used to be a dense forest. Today, the familly business own 11 farms all over the country. Mato Grosso, Brazil, 2015 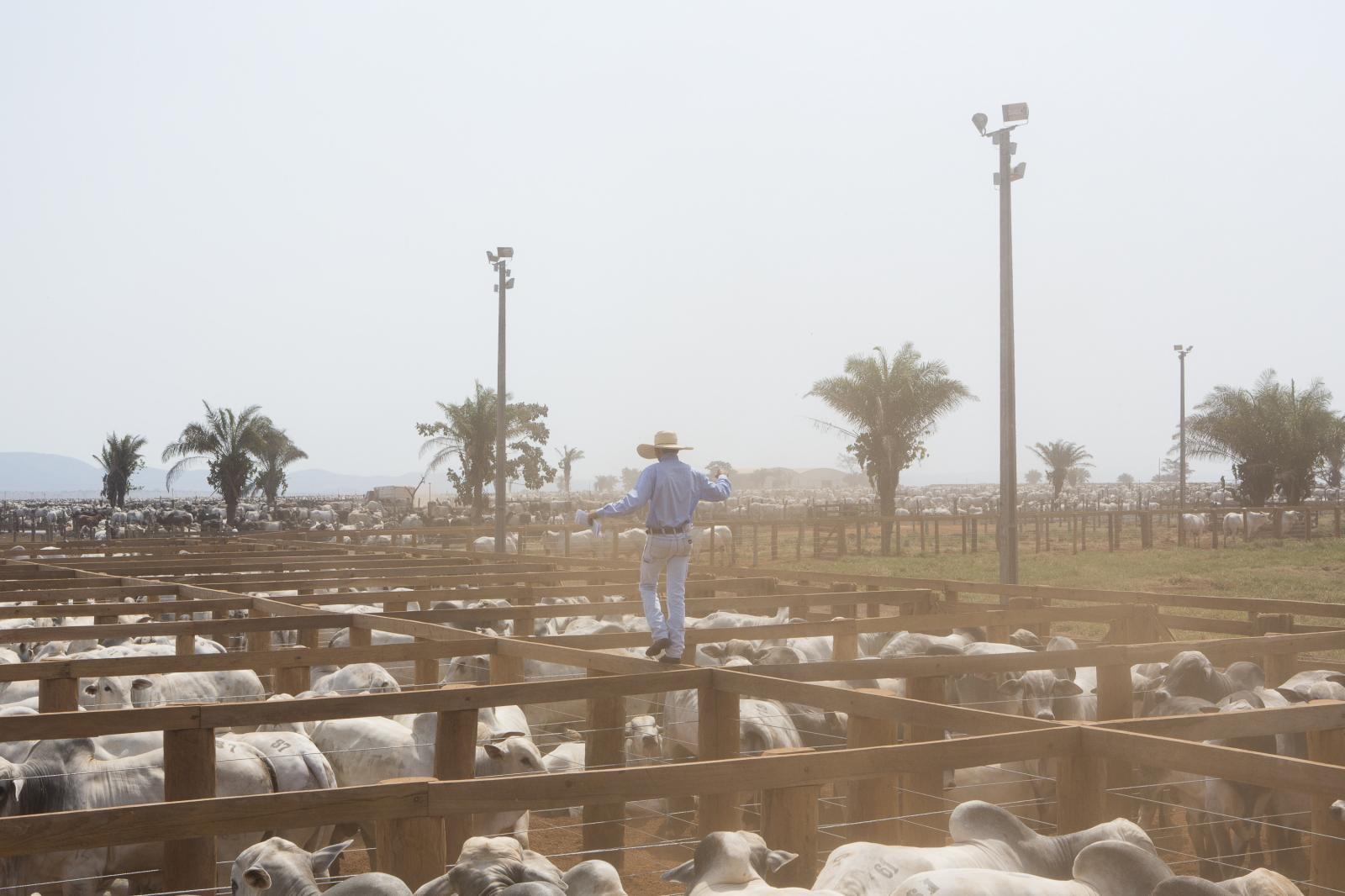 5 of 18 © 2021 Carolina Arantes
A cowboy balances between the corral fences. Belonging to the family group Rofrigues da Cunha, this farm has about 30 thousand animals. Brazil has a herd of 210 million head of cattle, which means one animal per person. In 2019, with the arrival of China among the Brazilian beef consuming countries, there was a lack of sufficient herd for slaughter. The perspective among farmers is to double their production in the coming years. 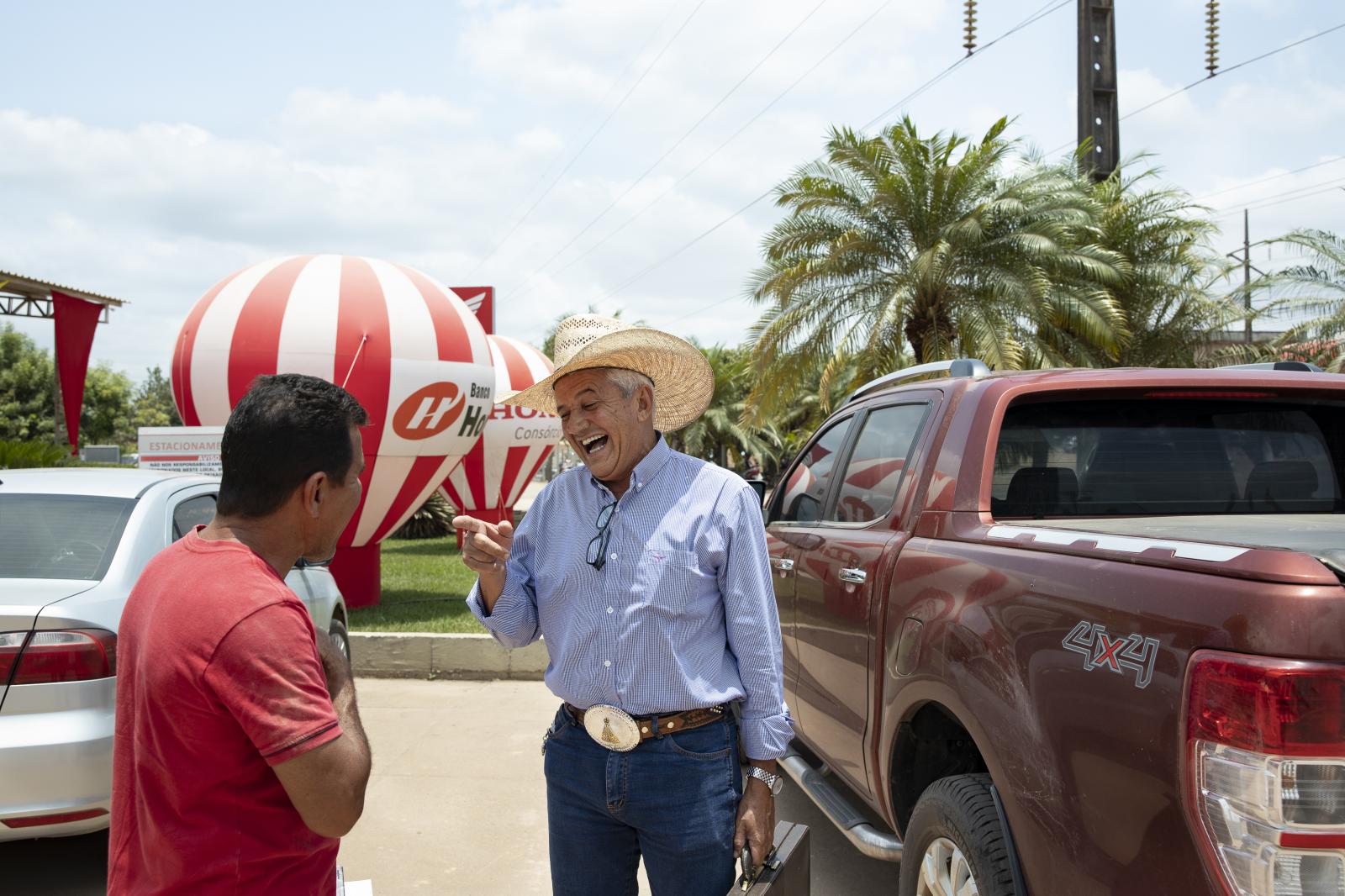 6 of 18 © 2021 Carolina Arantes
Antonio Vieira Caetano meet a colleague from the Army at car shop in Maraba. Mr Nénem, as he is called in the region, cries "Selva!" (a typical shout from the army of Amazonian region, what means "jungle"). Ancien President of the Cattle farmer Union of Maraba, Para, Brazil, Mr. Nenem (Mr baby), as he is known in the region, arrived in Para at the beginning of the 70's, coming from Goias after the dictature government call on population for occupying the Amazonia. After working at the Army training soldiers, after working as a cattle cowboy, and working as a logger, Mr Nenem made his money out of a sawmill wood shop in Maraba. When the shop was closed due to the new legislation on wood commerce, Mr Neném started as a farmer, raisin cattle and fattening veals to the meat industry. Maraba, Brazil, 2019. 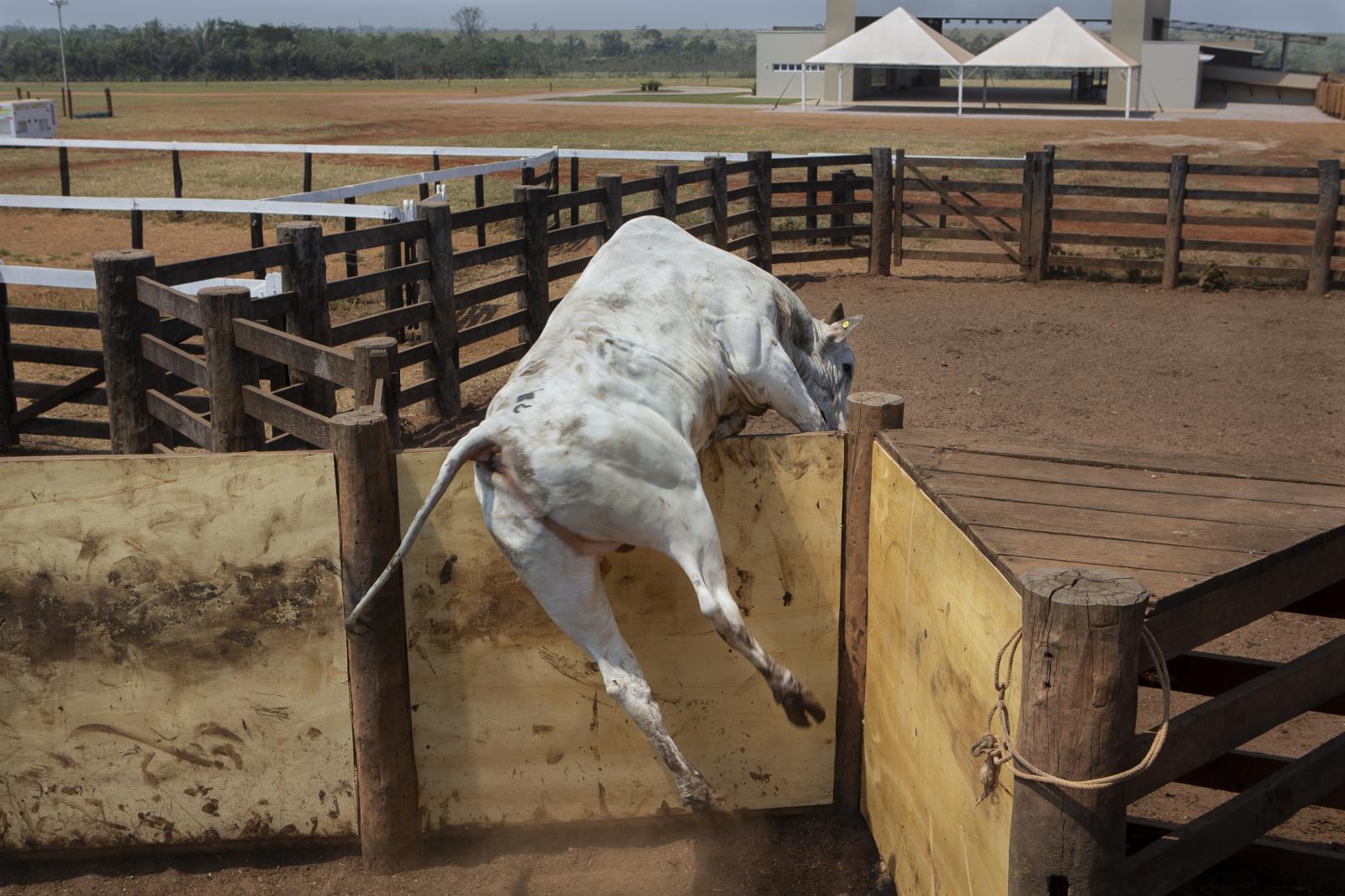 7 of 18 © 2021 Carolina Arantes
A bull jumps the fence trying to escape the truck entrance that led to the slaughterer. Brazil is the biggest meat seller on the world, being one in four steaks eaten internatinally from Brazilian origin. The intention of the rural lobbie is to double these numbers until 2025. Pontes e Lacerda, Mato Grosso, Brazil, 2015 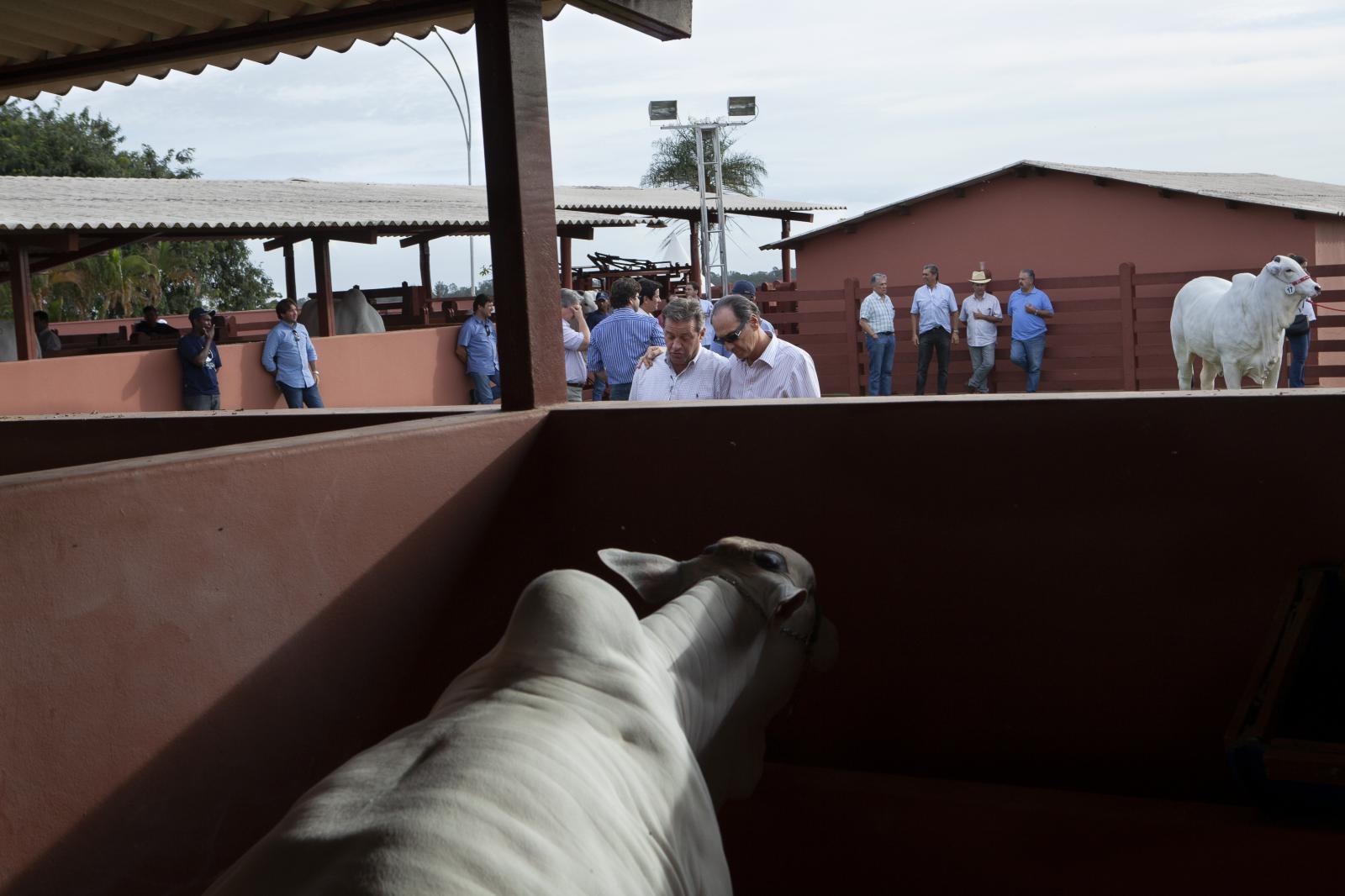 8 of 18 © 2021 Carolina Arantes
Cattle breeders in a private luxury cattle auction during the most important cattle Fairs of the country, the Expozebu. Uberaba, Brazil, 2013. 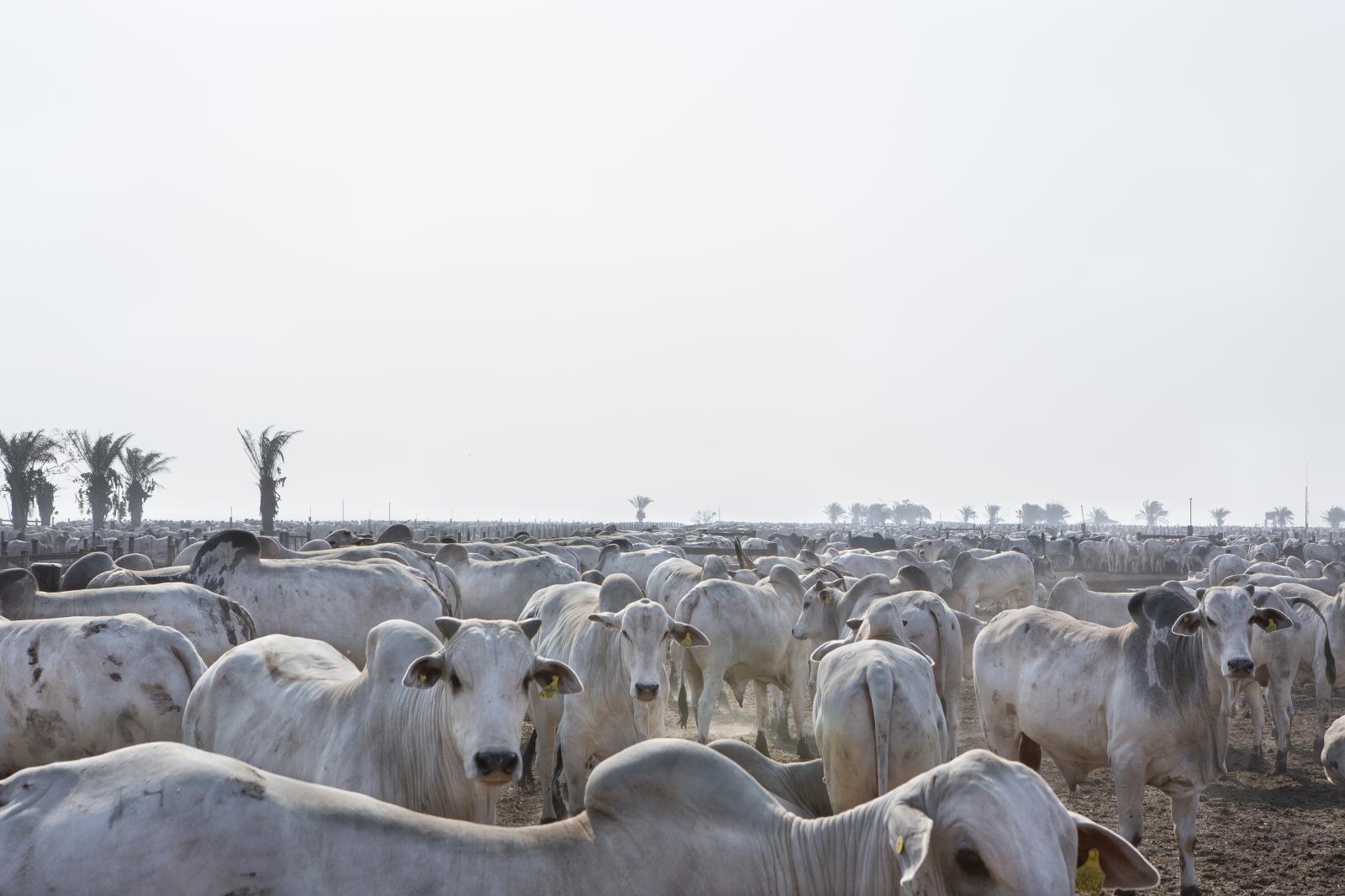 9 of 18 © 2021 Carolina Arantes
Cattle feedlot. The confinement has been growing in the country as an alternative to the spread land traditional way of raising animals. It is estimated that this tendancy will be continued during the next years. young traditional breeders try to change the way cattle are raised, choosing genetics, grass improvements and feedlot fattening. With the entry of China in the list of Brazilian meat buyers, these breeders are betting on these methods to sell better and faster, increasing the production and number of animals.Pontes e Lacerda, Mato Grosso, Brazil, 2015 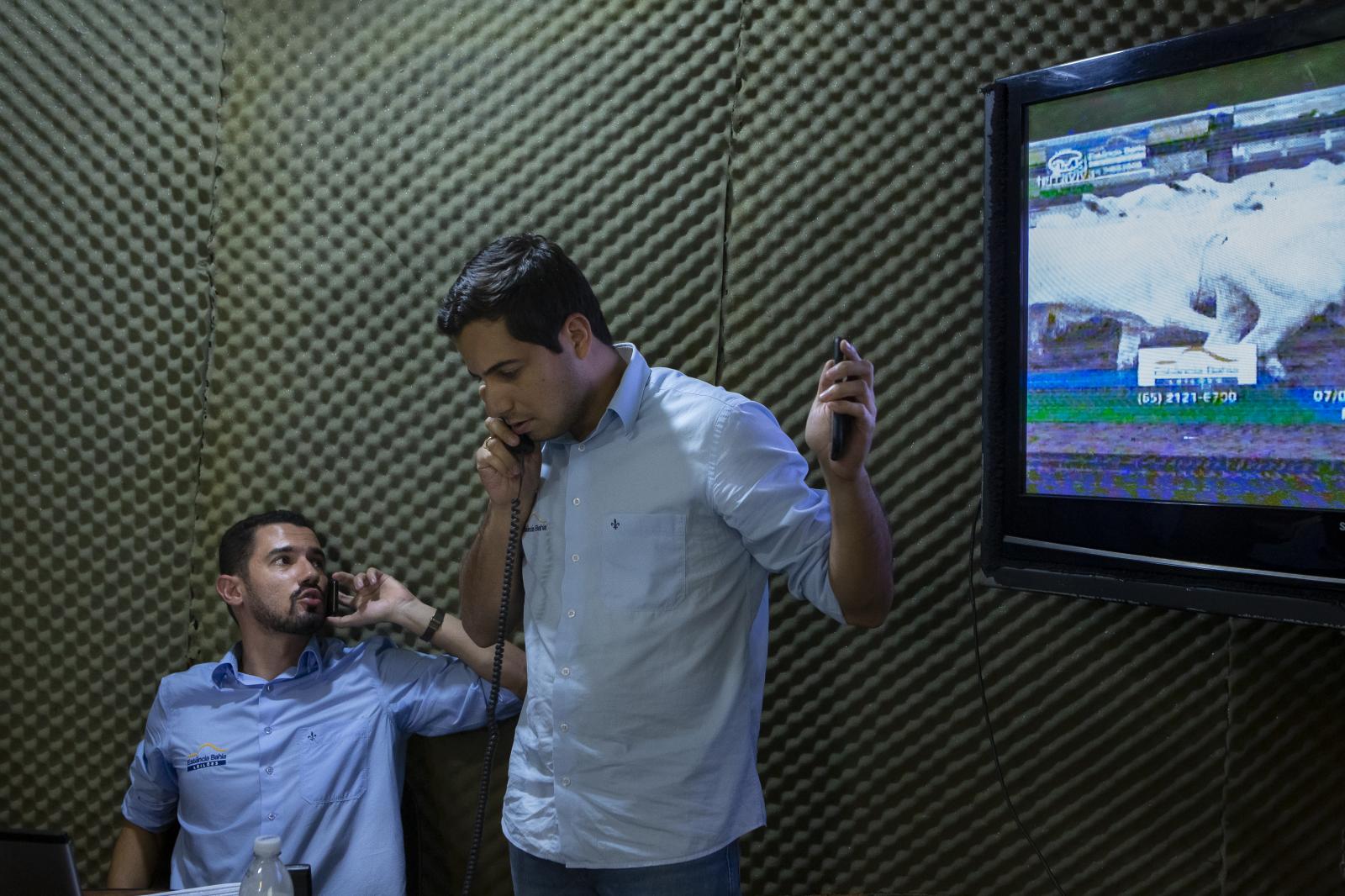 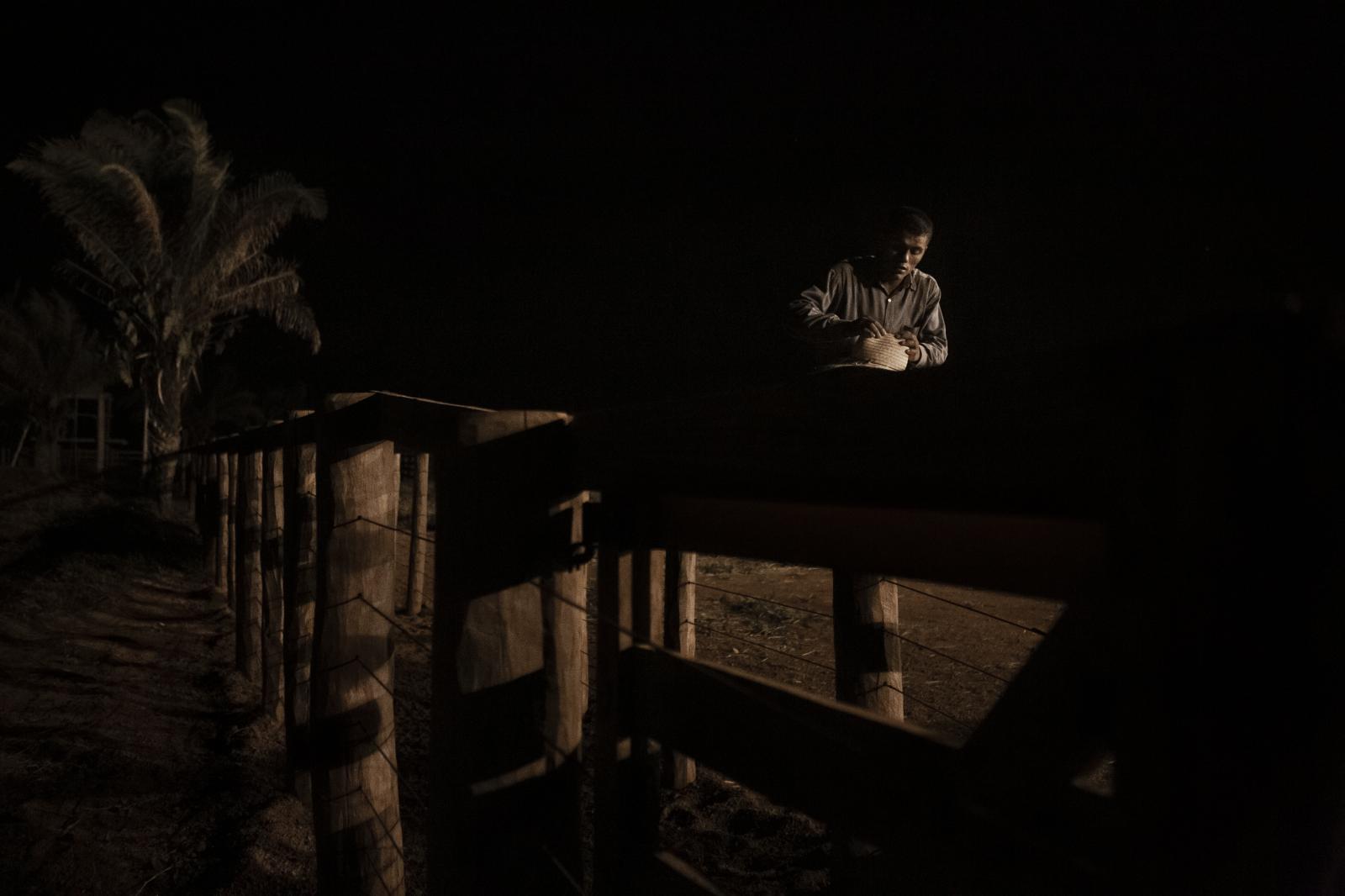 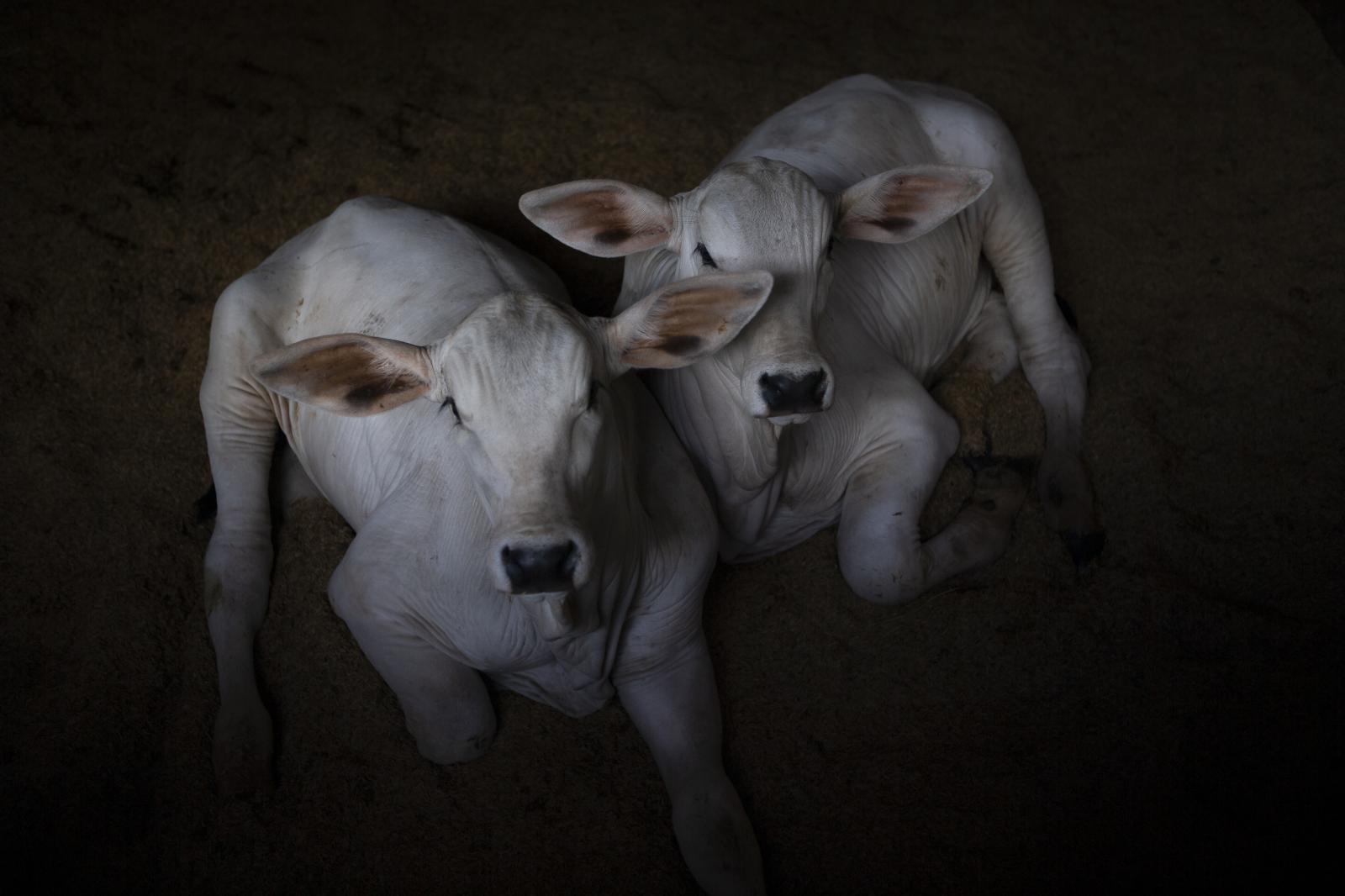 12 of 18 © 2021 Carolina Arantes
Two cloned calves with only few months of life, laying down in the corral of Geneal Laboratory farm . Geneal is one of the most important laboratories of bovines clonning in Brazil, reaching to give birth to around 70 cloned animals per year. Cloned animals are animals that have reached a considerable level of genetic development and whose reproductive material is for sale in the country's laboratories. Buyers do not know if the material purchased is from the source animal or its clone. Uberaba, Minas Gerais, Brazil, 2017 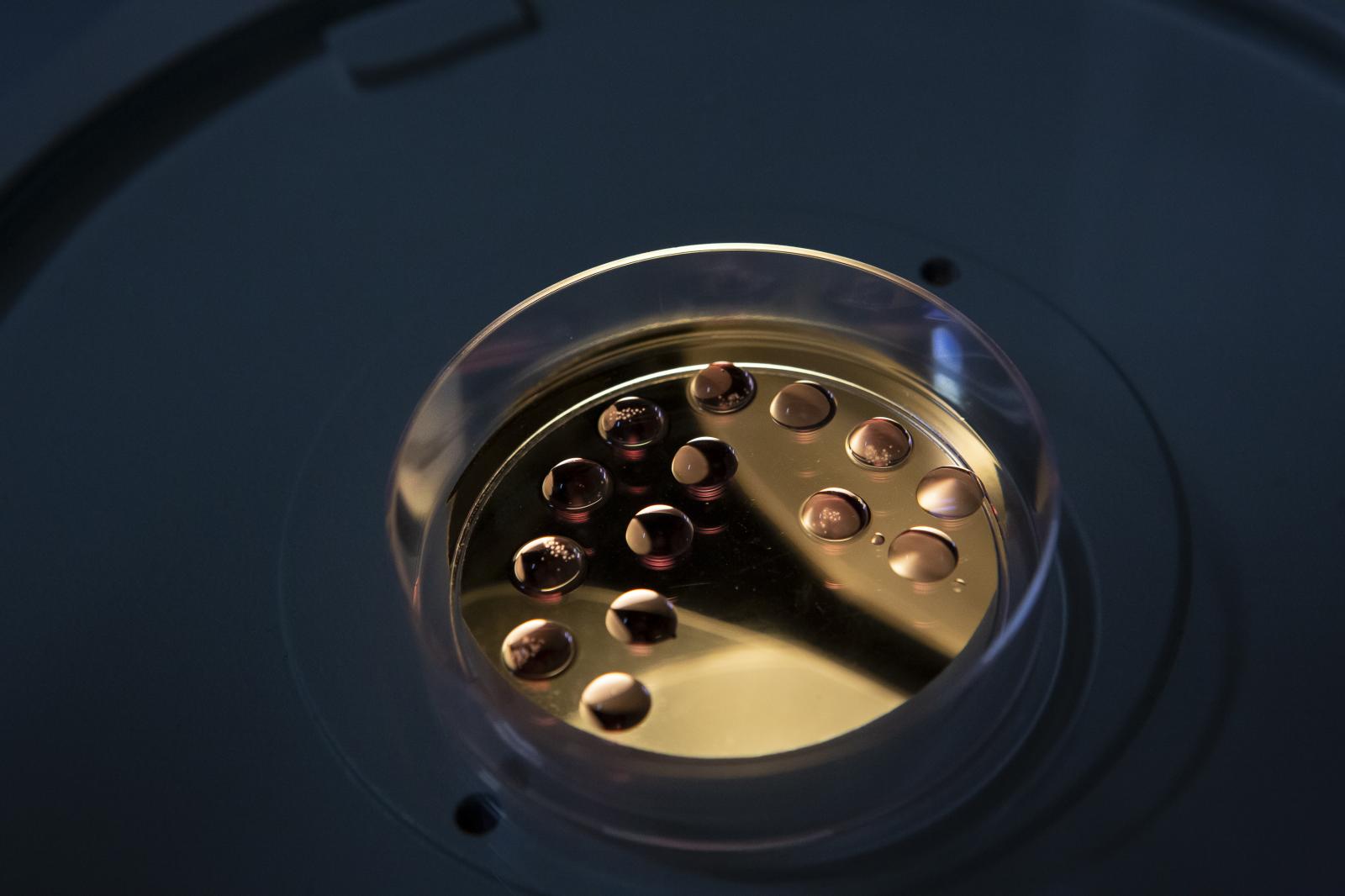 13 of 18 © 2021 Carolina Arantes
Fresh ovules that have just arrived in the Bioembryo laboratory in Cuiaba. Each drop belongs to one different cow and the tiny white dots in the drops are the ovules ready for the insemination. The result is a result of the farmer's previous choice which defines which cow crosses which bull. Crossings like these are already being made with global warming in mind: a search for animals that will be better adapted to extreme weather conditions. Cuiaba, Mato Grosso, Brazil, 2017 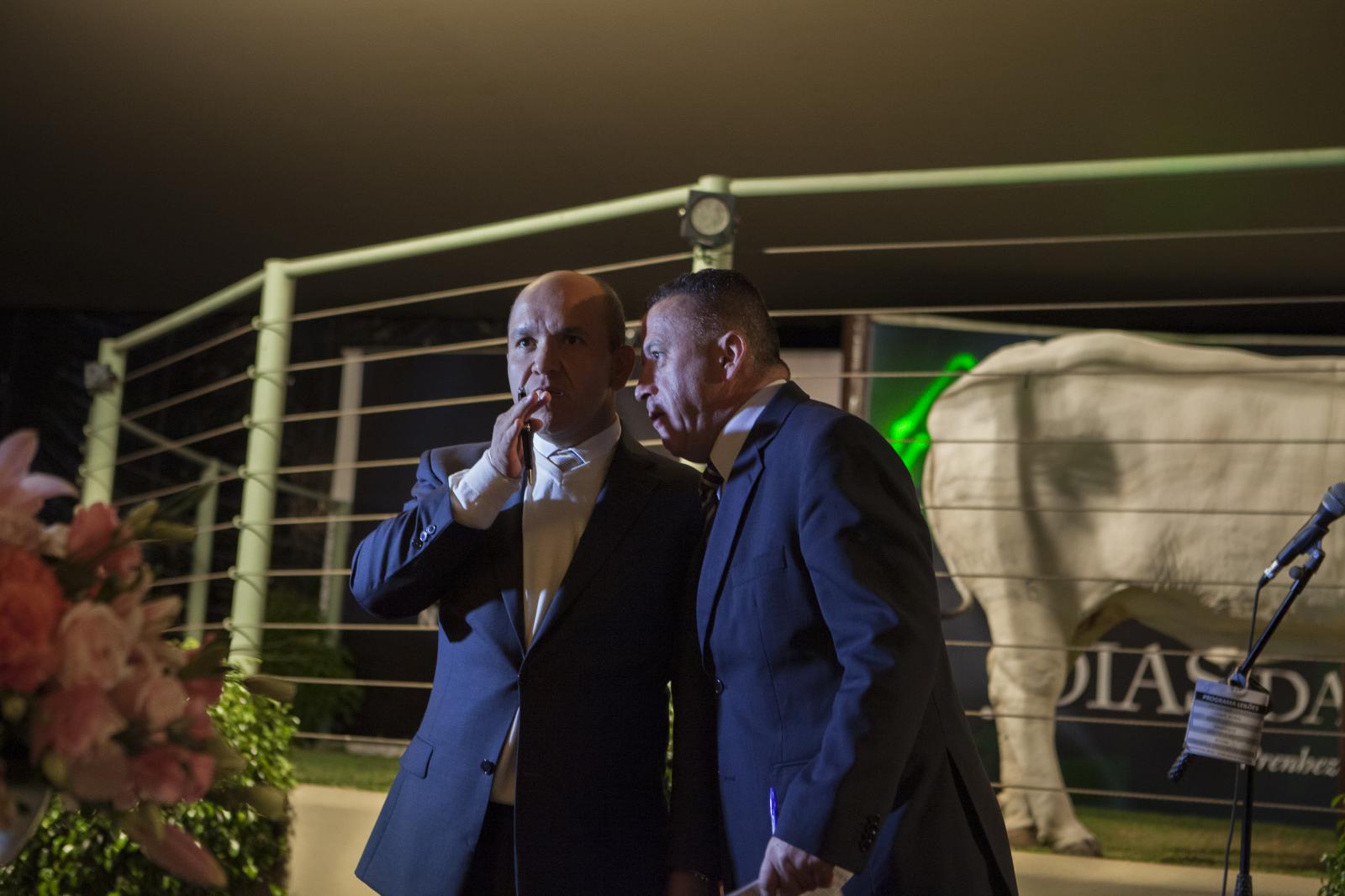 14 of 18 © 2021 Carolina Arantes
Auction criers during a private luxury cattle's auction organised during the Expozebu. Animals can be sold for very high prizes. Uberaba, Brazil, 2013. 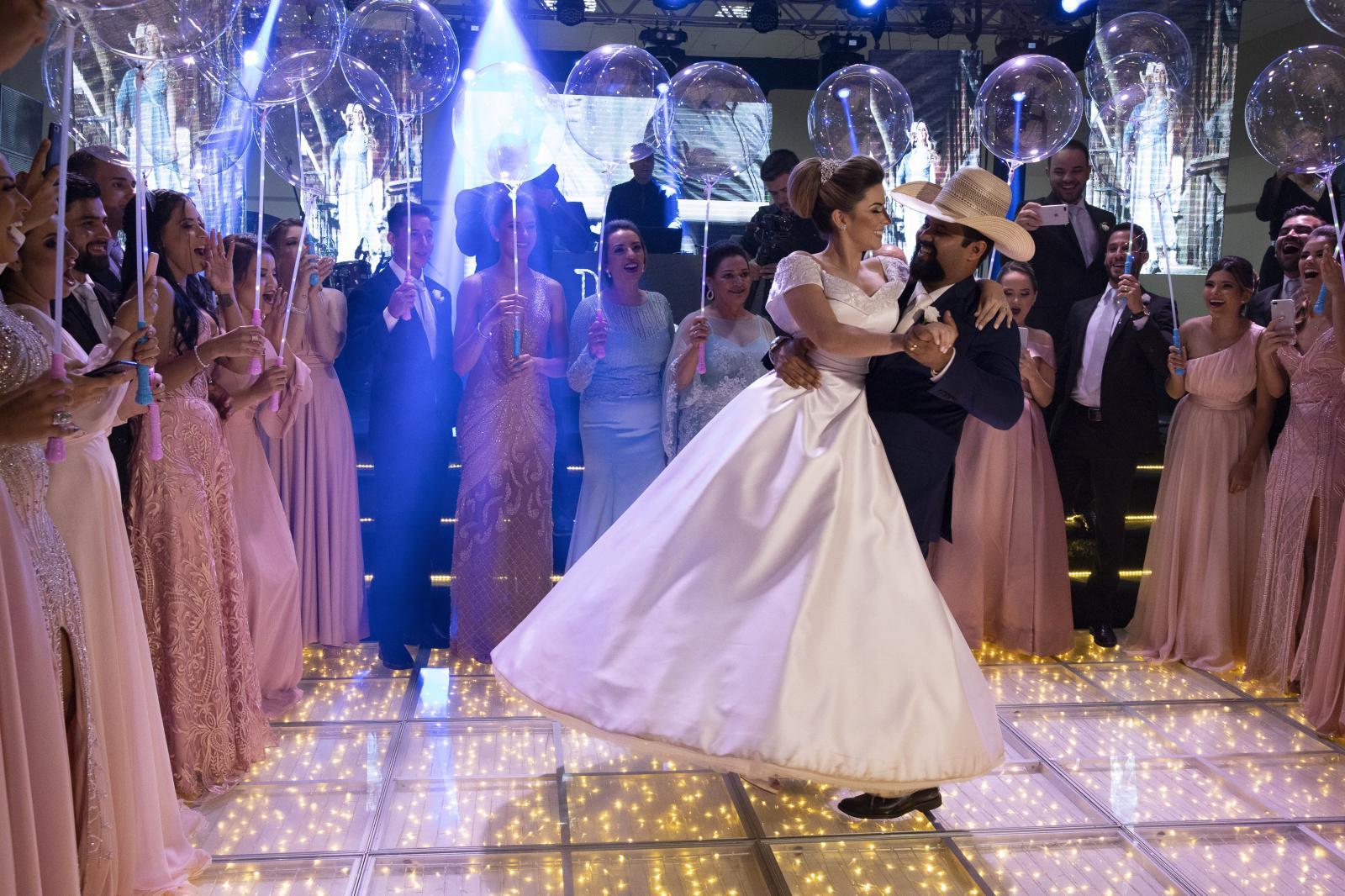 15 of 18 © 2021 Carolina Arantes
Weslayne and her husband Yago, dancing at the opening of their Wedding party. Yago is a farmer, working with his father in a familiar business of fatting veals for the meat industry. Maraba 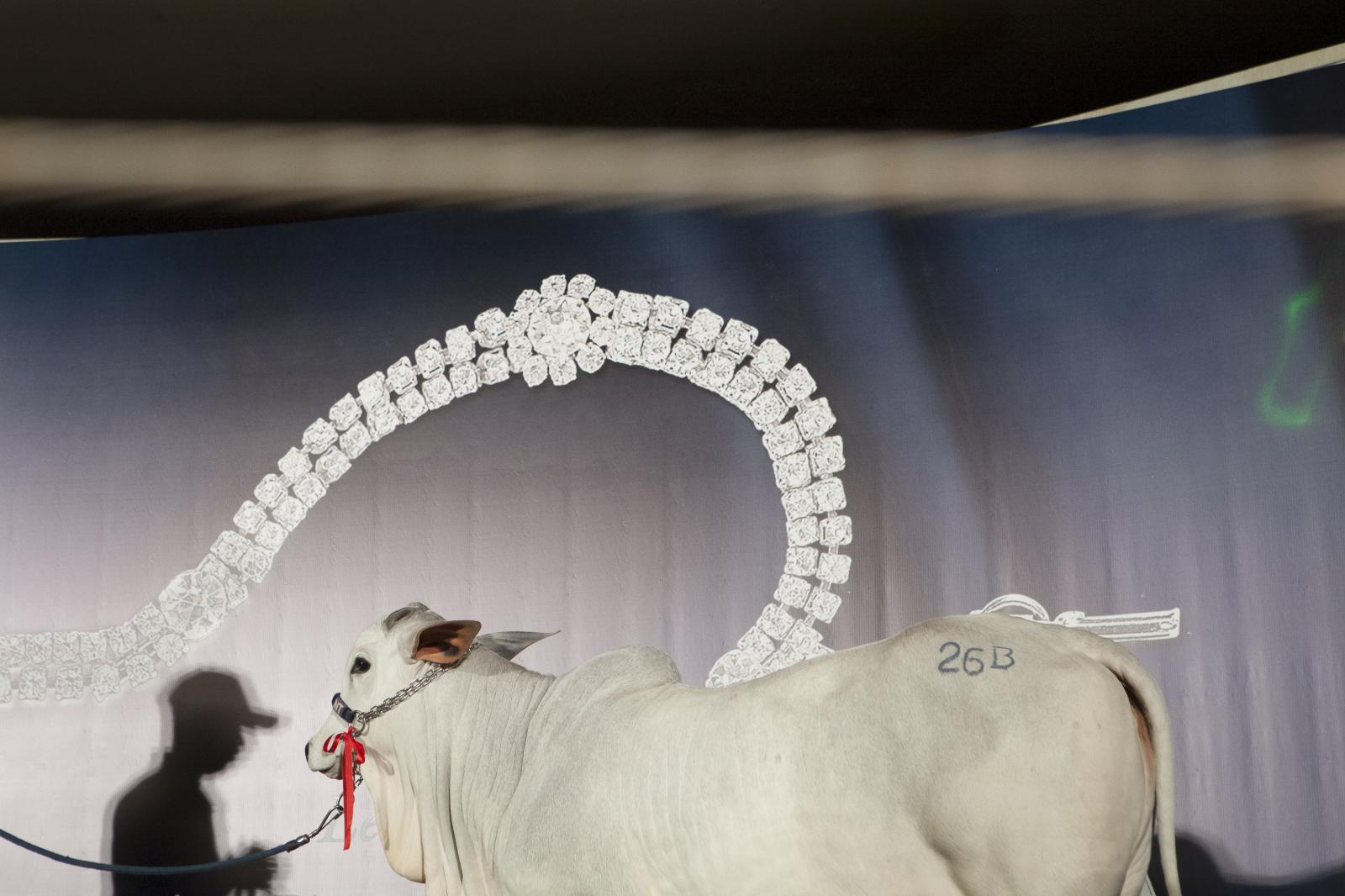 16 of 18 © 2021 Carolina Arantes
A calf is presented to sale at the private auction "Joias da Raça" (The Jews of the Race) organised by the farm Nova Trindade during the ExpoZebu Cattle Fair. The animal was sold for 1 million dollars. Uberaba, Brazil, 2013 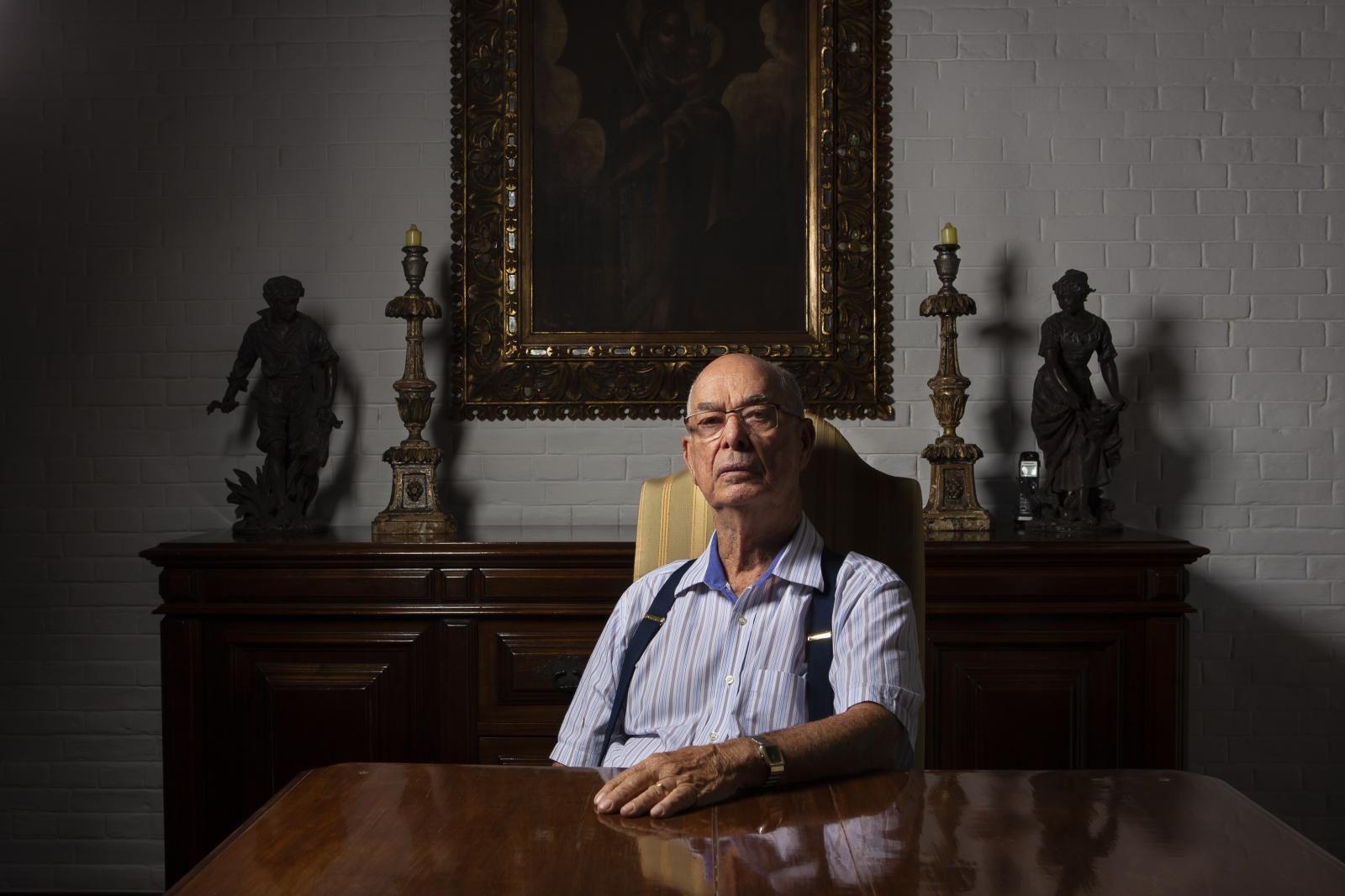 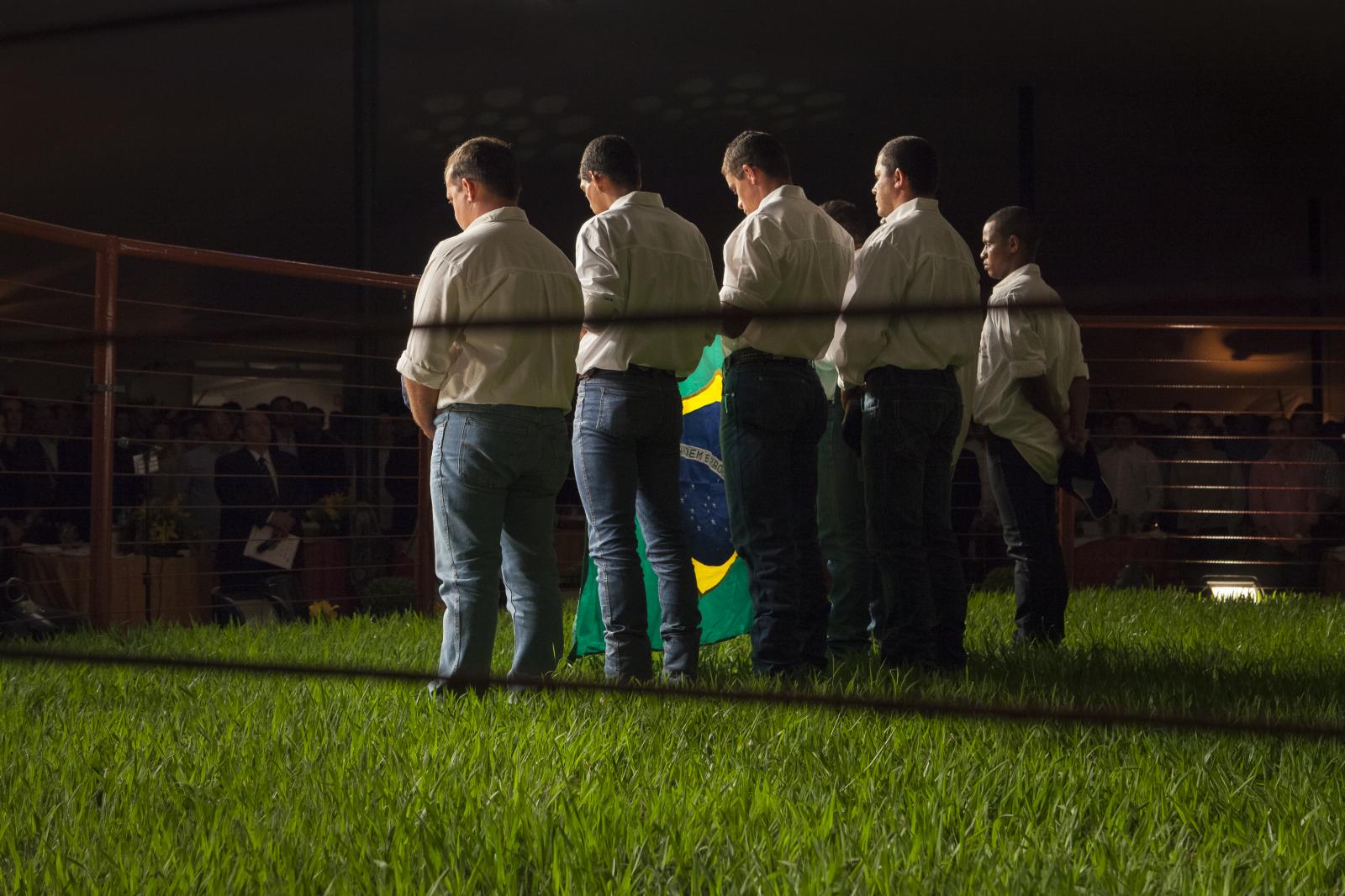 By Carolina Arantes / France — THIS STORY IS UNDER CONSTRUCTION. MORE SOON!   First Generation is an on-going project about the first..
Jan 28, 2015

By Carolina Arantes — Life in elderly homes is often a sad and hard reality. It’s difficult for many of us to imagine..
Jan 22, 2015