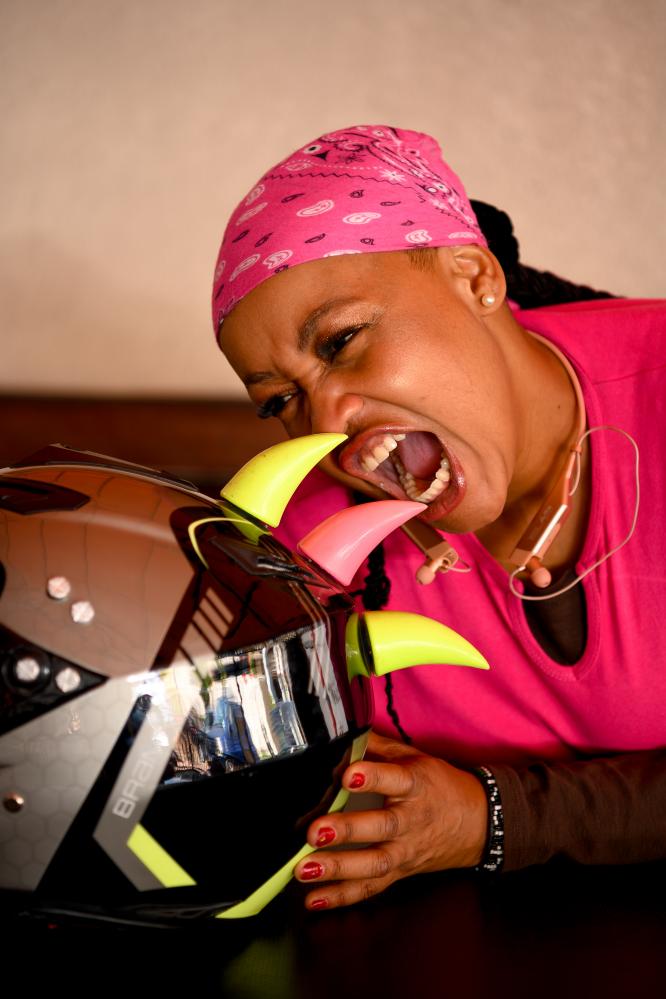 1 of 12 © 2022 Maggie Andresen
Ciku Mbithi, 46, is a fuel station dealer, tour and travel agent, and farmer. She has an 18-year-old child and is one of the founding members of the Throttle Queens. “I dreamt of a group of women riders who pull each other up rather than tear each other down,” she said. “Where women of substance, who ride, would have a safe forum to be. A safe place where we could address issues unique to women riding motorcycles in a mostly male dominated field.” 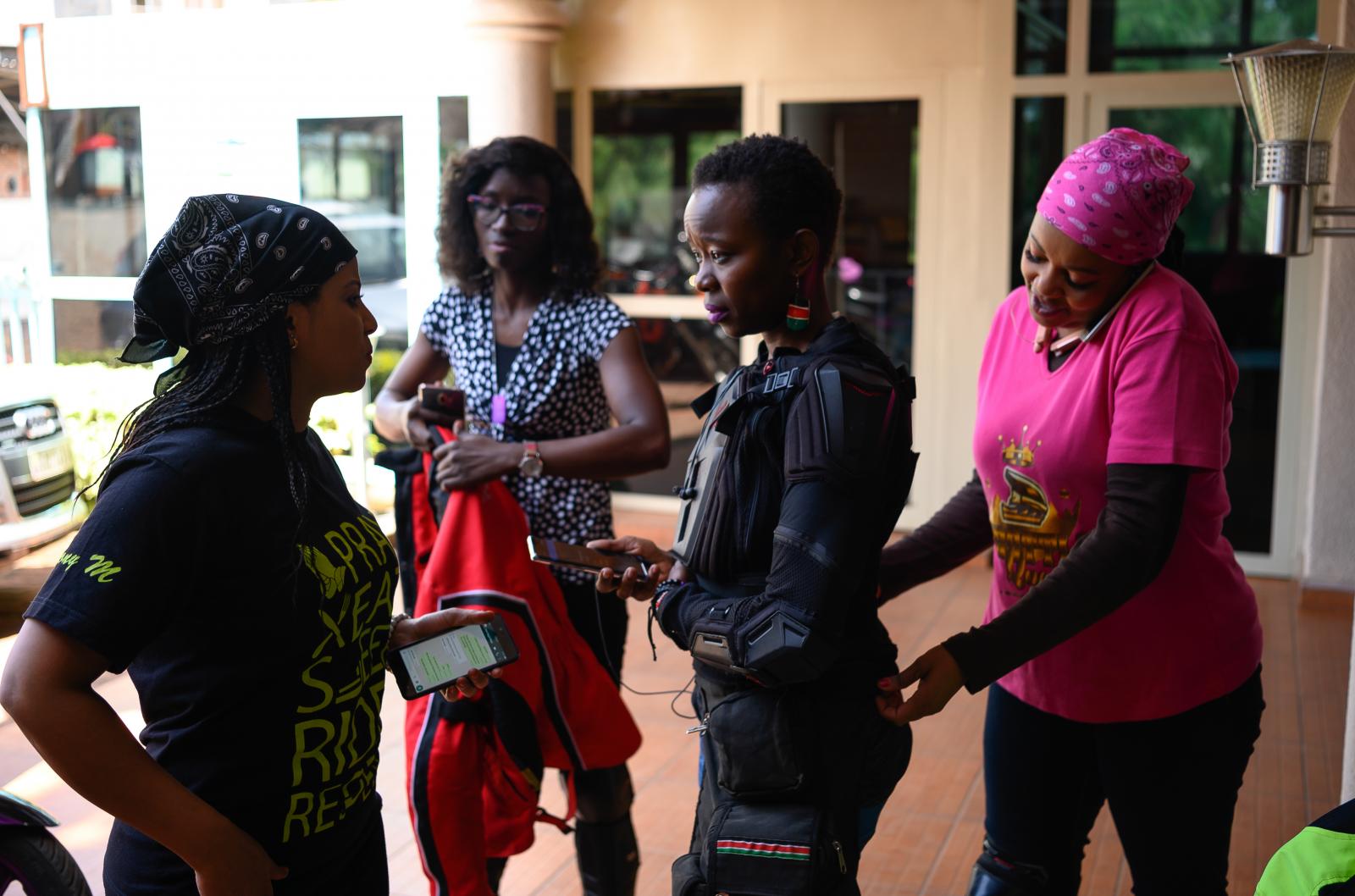 2 of 12 © 2022 Maggie Andresen
The Throttle Queens get ready for a ride around Kigali at their Niyamirambo hotel. The following day, they plan to ride to the Burundi border from Kigali, and then back to Nairobi through Kampala. 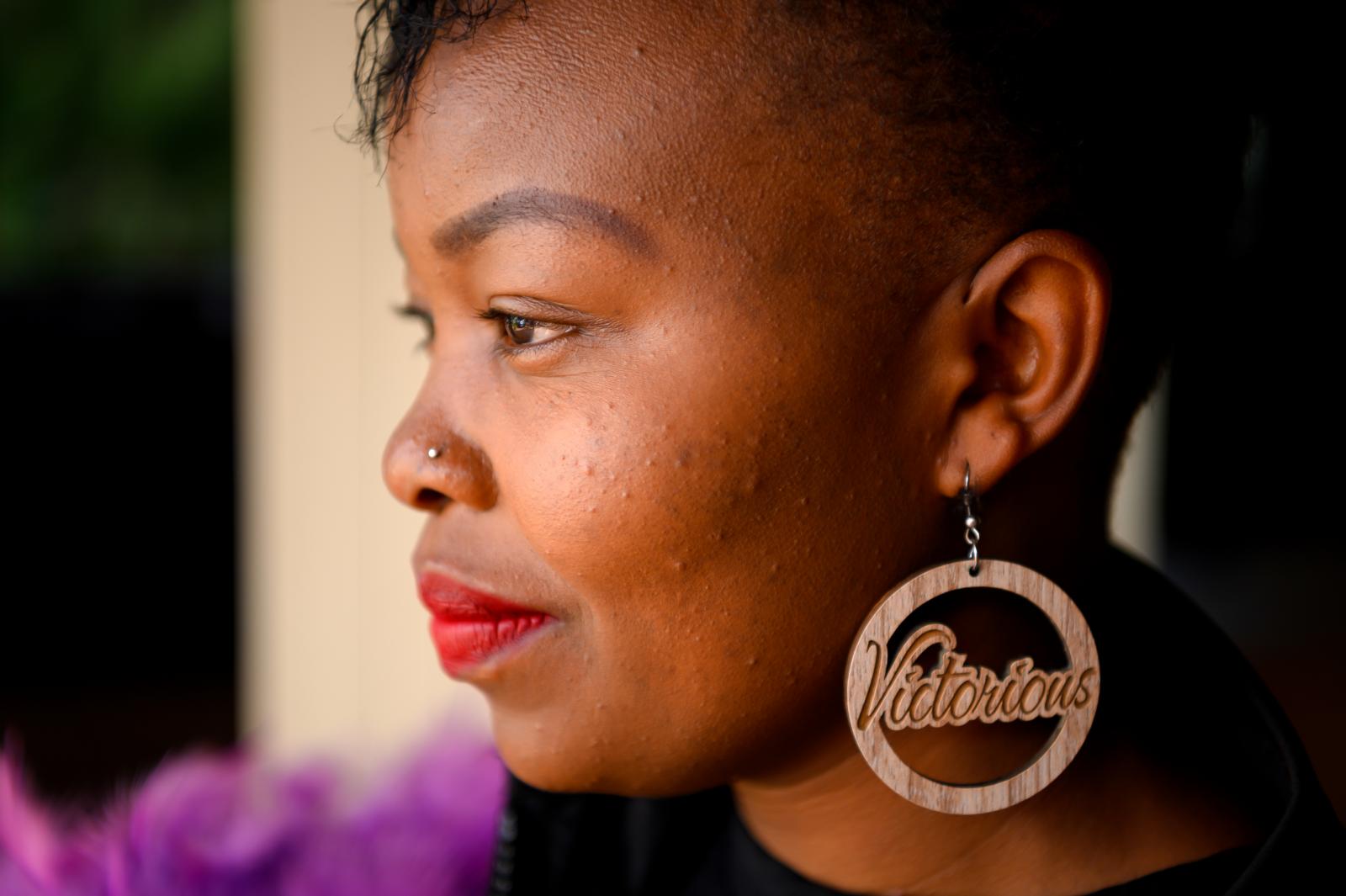 3 of 12 © 2022 Maggie Andresen
Victoria Musyoki, 32, is the CEO of Kiddie World Kenya, a children’s entertainment company, and a mother of two children. “Riding has given me confidence. It has made me mentally tough and disciplined. I am also more fearless now than when I started riding," said Musyoki, who’s been riding for three years. She added, “For me, it’s no longer so much about riding anymore but it’s about how many times you rise up whenever life knocks you down.” 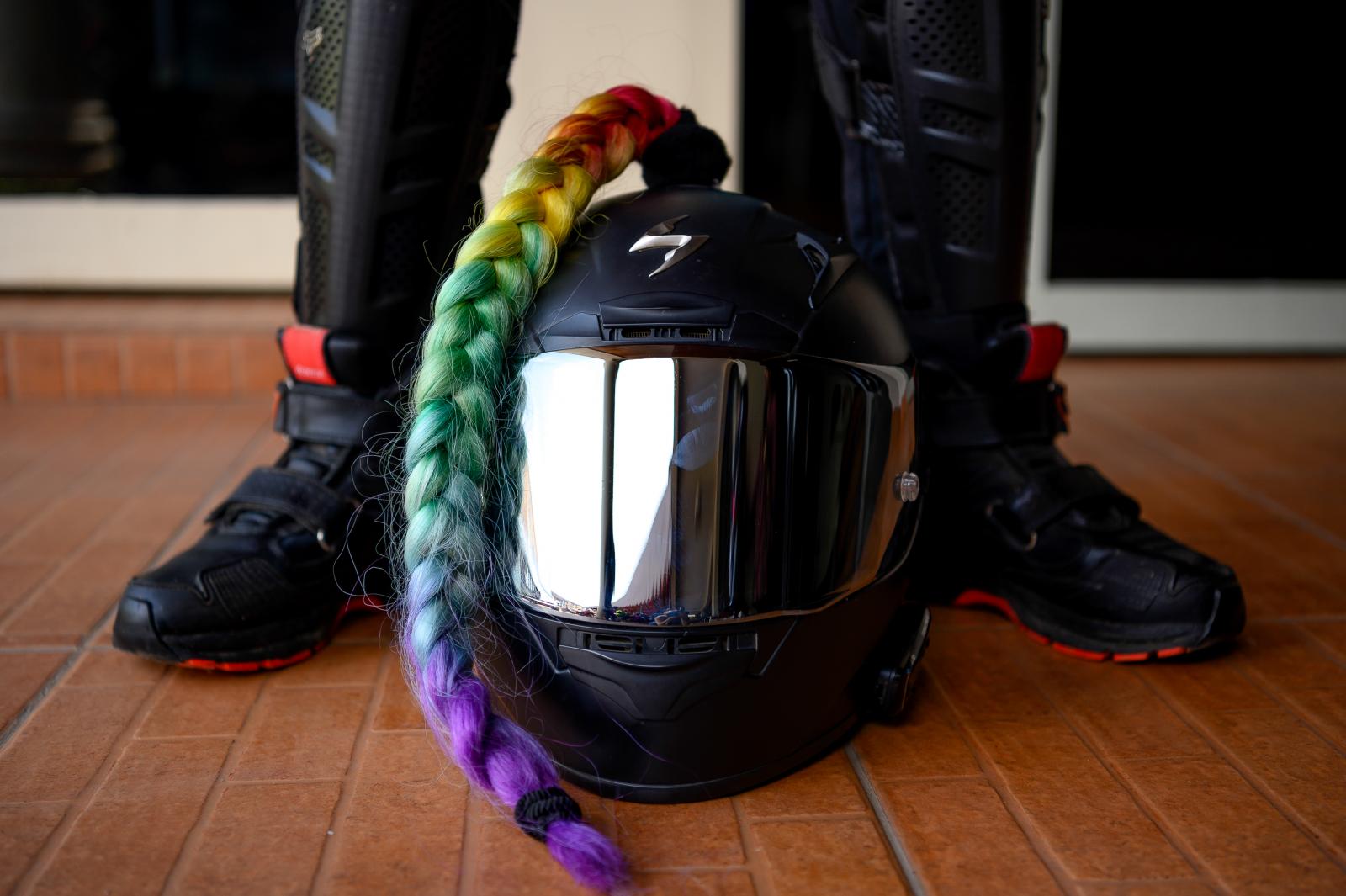 4 of 12 © 2022 Maggie Andresen
The Throttle Queens customize their helmets with flair and personality. Besides making a fashion statement, the helmets remind the group’s supporters of their message on this ride: increasing bike safety awareness. 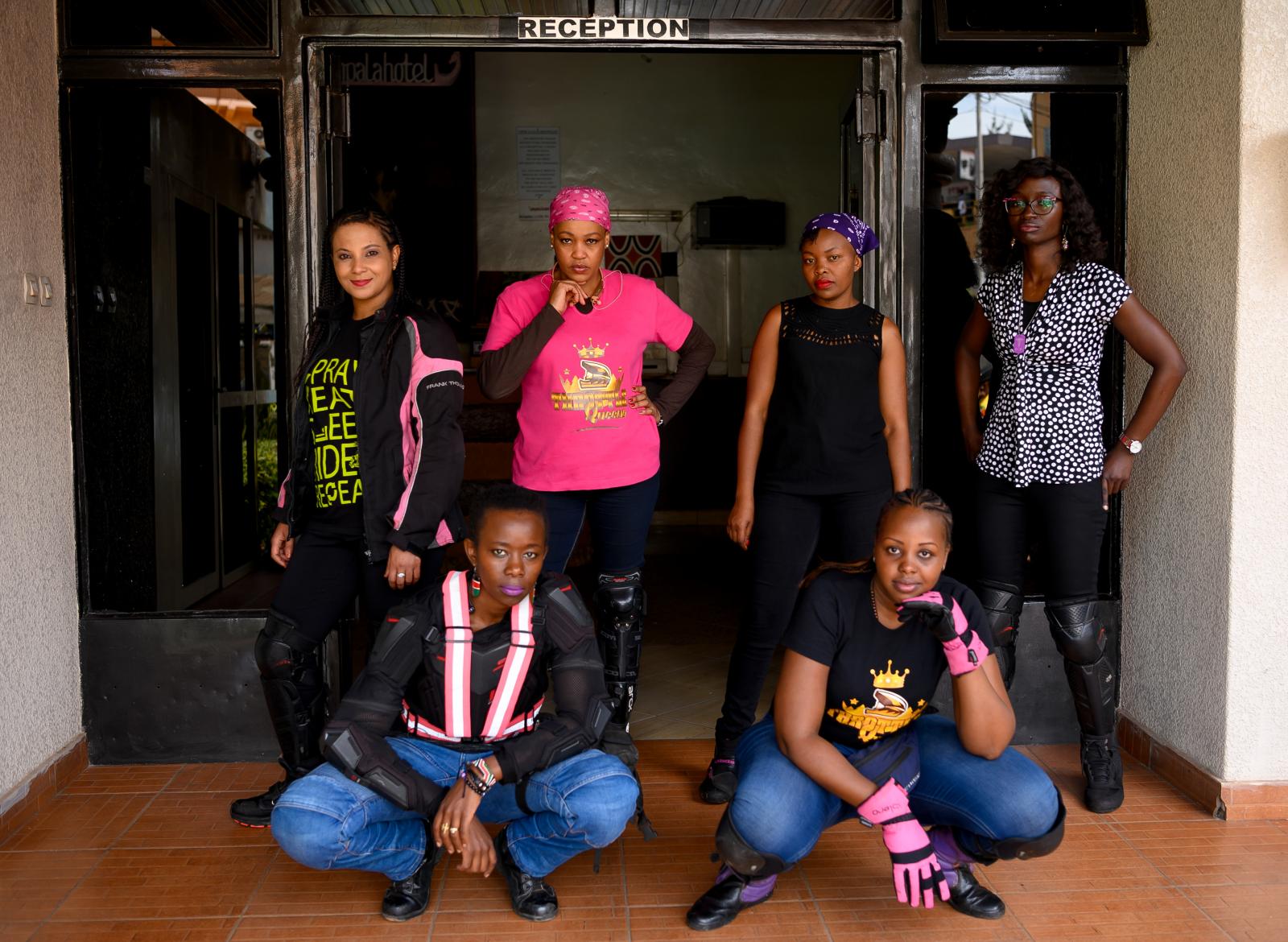 5 of 12 © 2022 Maggie Andresen
Founded in 2017, the Throttle Queens biker club was established to encourage women riders and empower others to follow their dreams. The group engages in charitable work often targeted at increasing the livelihoods of young girls. 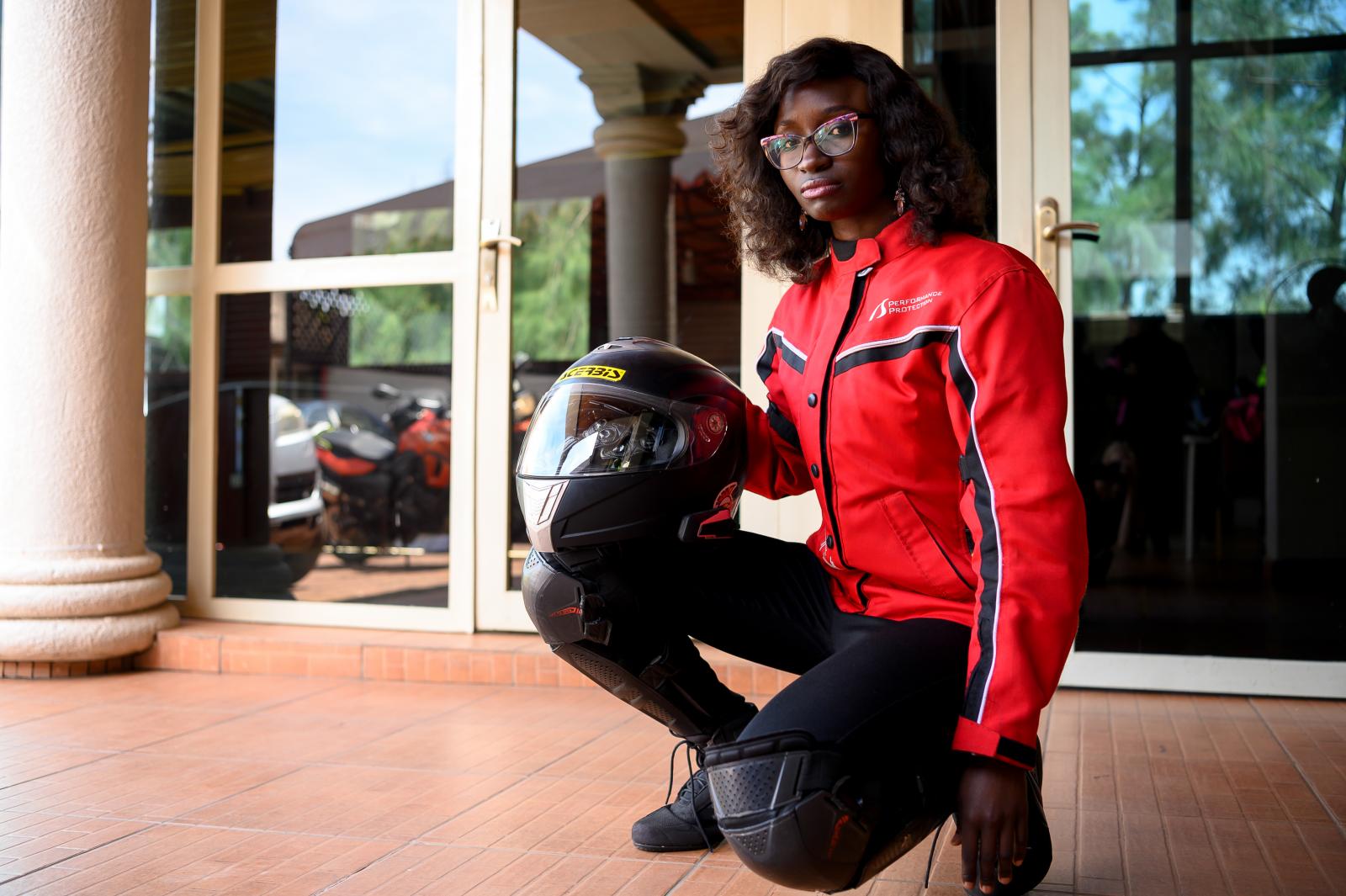 6 of 12 © 2022 Maggie Andresen
Rhoda Omenya, 33, is a project management consultant. She’s been riding since 2015. “Whatever space you are in, seek out the courage within you,” she said, and draw support from “good, honest and faithful friends, to achieve the small and big, hairy, audacious goals.” 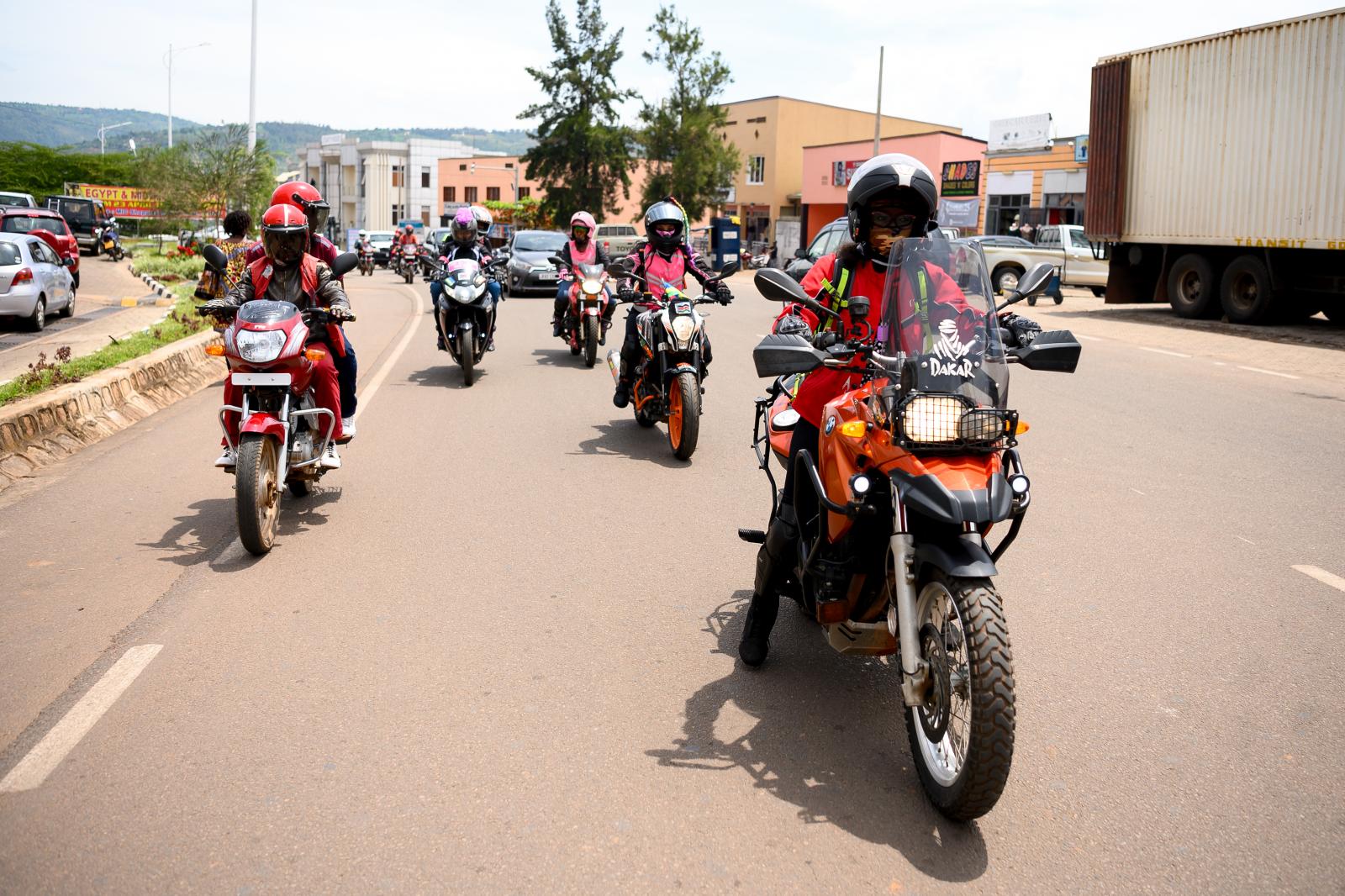 7 of 12 © 2022 Maggie Andresen
The Throttle Queens biked from Nairobi to Kampala to Kigali over three days. 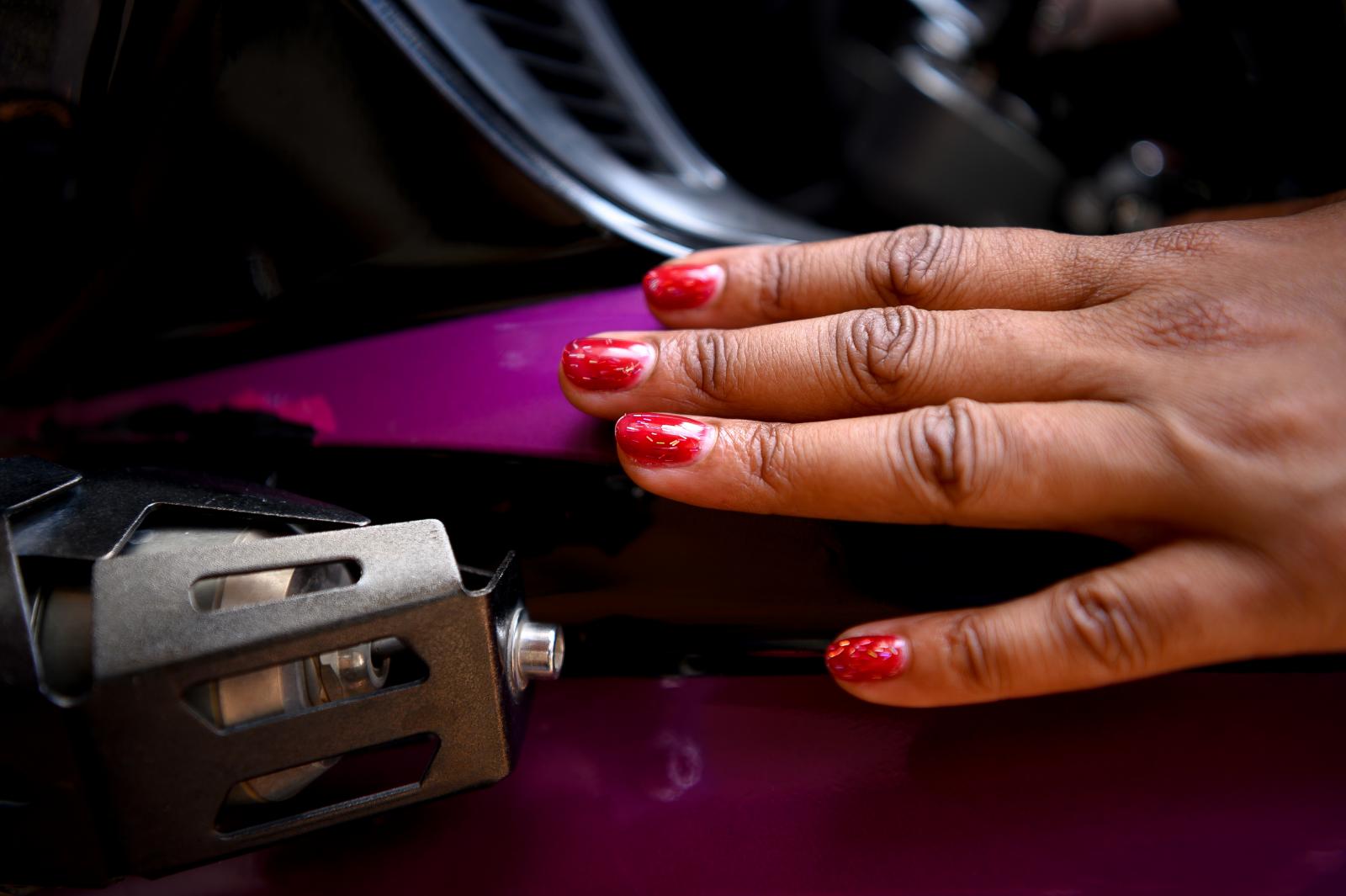 8 of 12 © 2022 Maggie Andresen
Ciku Mbithi's nails shine brightly against her motorcycle as she and The Throttle Queens fill their tanks at a petrol station. 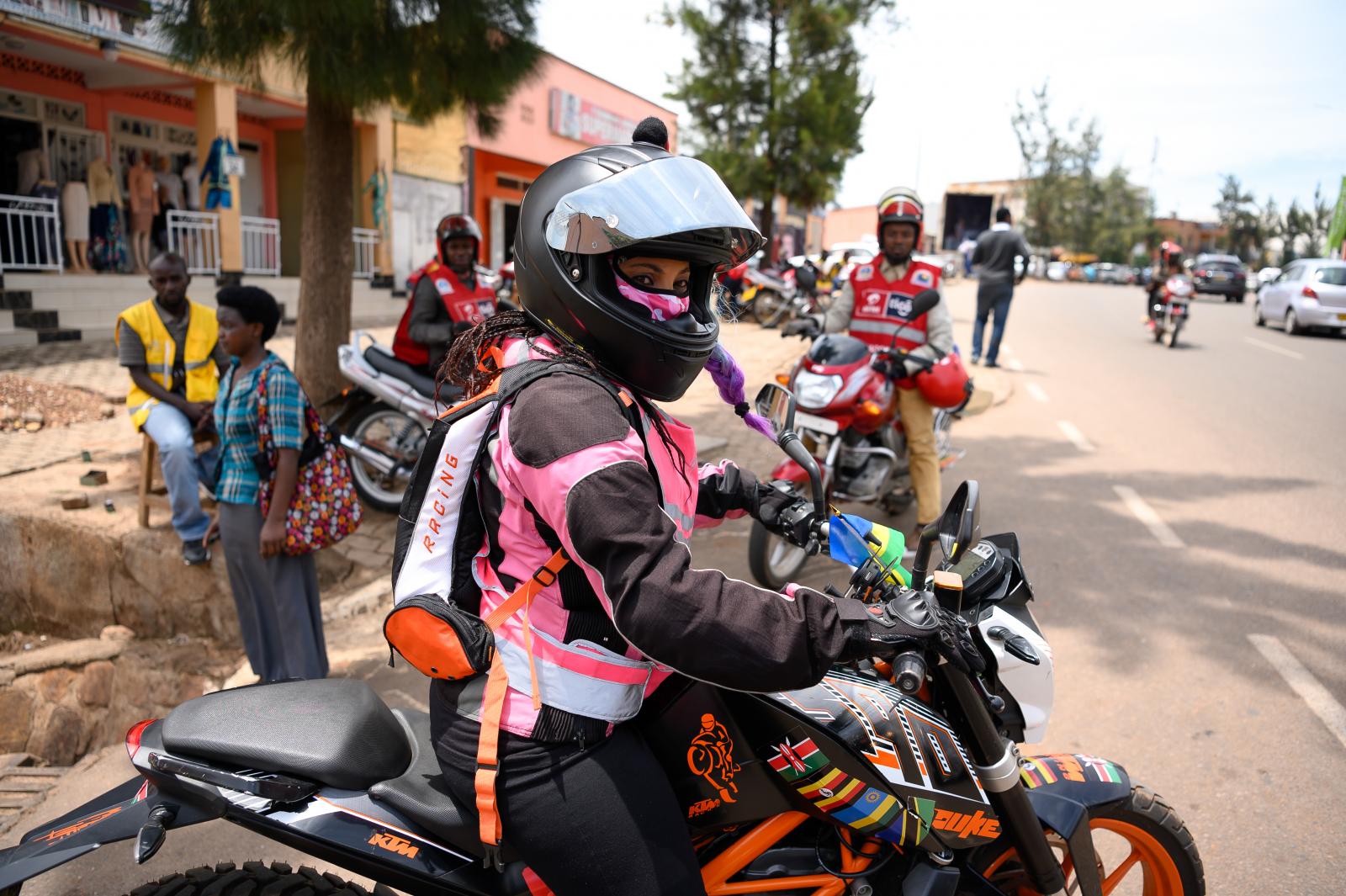 9 of 12 © 2022 Maggie Andresen
Aisha Mohamed, 37, is a human resources manager with three children. She is in her fourth year of riding. “I can see how a woman has a lot more to overcome socially to get into riding,” she said. “Most people are going to try to discourage it, and gaining the confidence to get on a bike would be a lot harder if everyone is telling you that you can’t do it or shouldn’t. Get out of your comfort zone and do things that are scary — feel strength and power within that.” 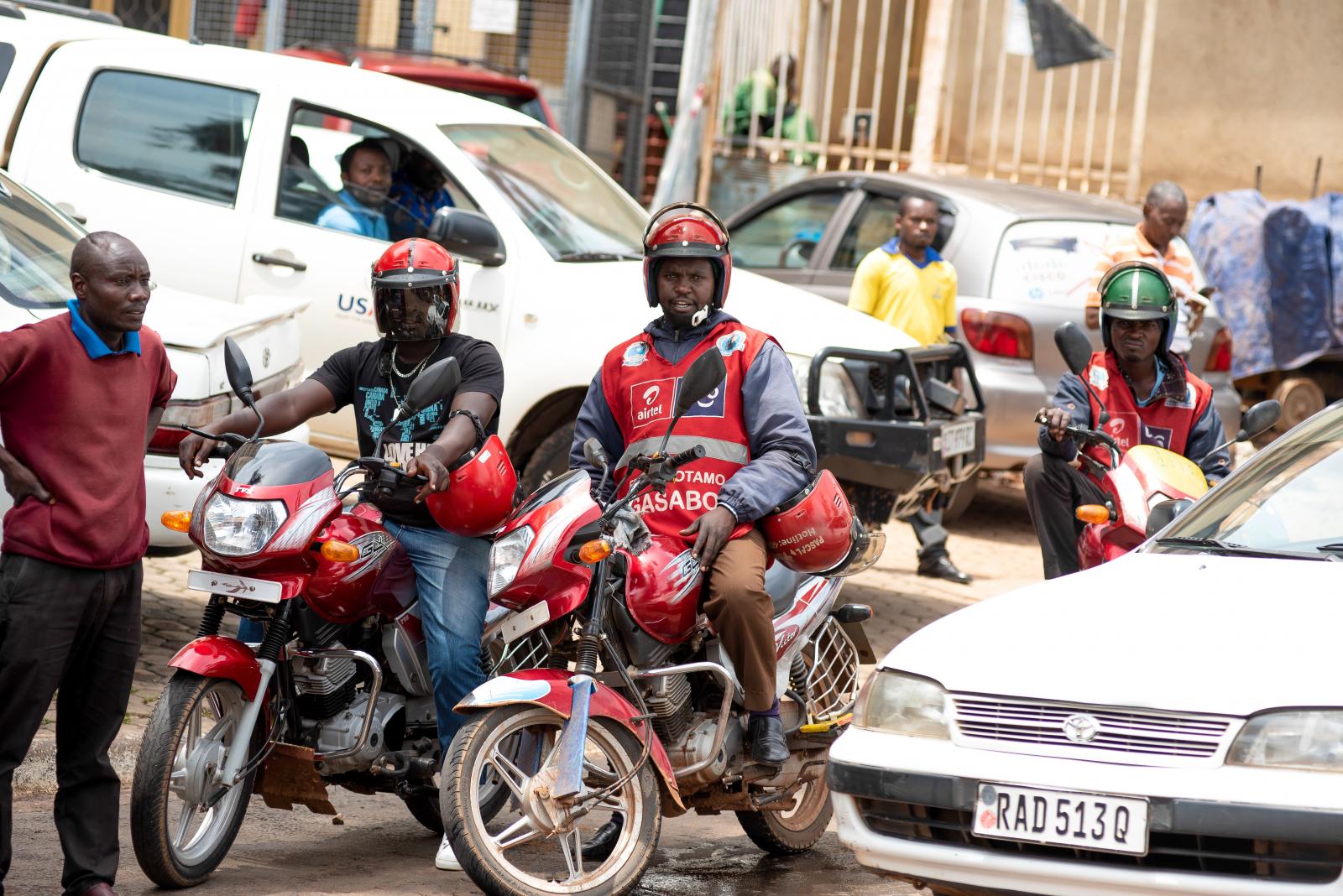 10 of 12 © 2022 Maggie Andresen
Motorcycle taxi drivers and onlookers stare as the Throttle Queens pick up flowers in the Kigali neighborhood Kiyovu. Women motorcyclists are almost nonexistent in the city. Cedric Abuna, president of the Kigali Free Bikers, only knows of three female riders, and he said two do not have bikes. 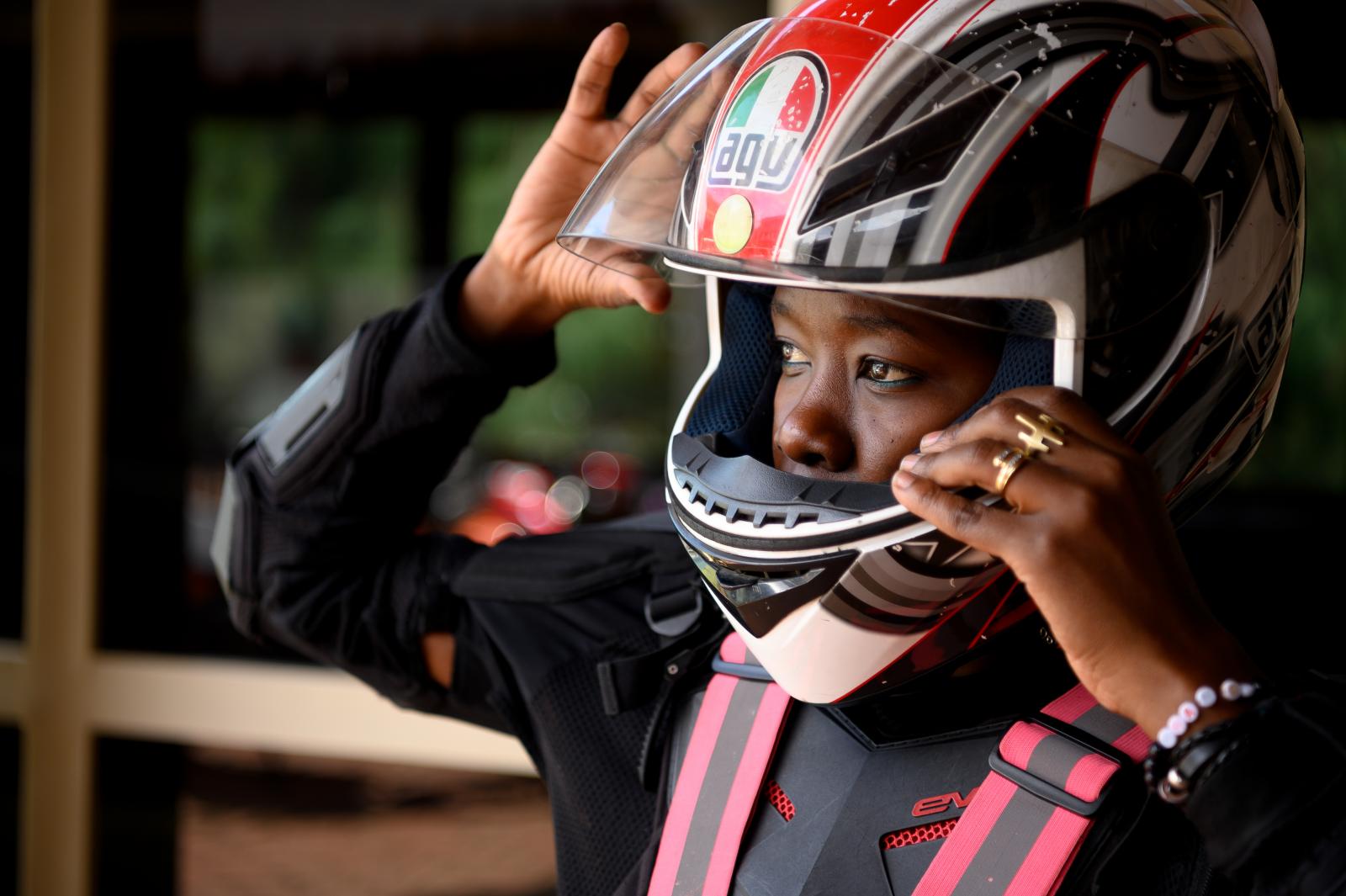 11 of 12 © 2022 Maggie Andresen
Njeri Mwangi, 38, is the co-founder of Nairobi-based PAWA 254, a collaborative art space for young creatives. She has three children, and began riding in 2014. She said riding makes her feel like she is in “total control. It makes me feel freedom to be anything.” She added, “I can forget everything for the moment when I am riding.” 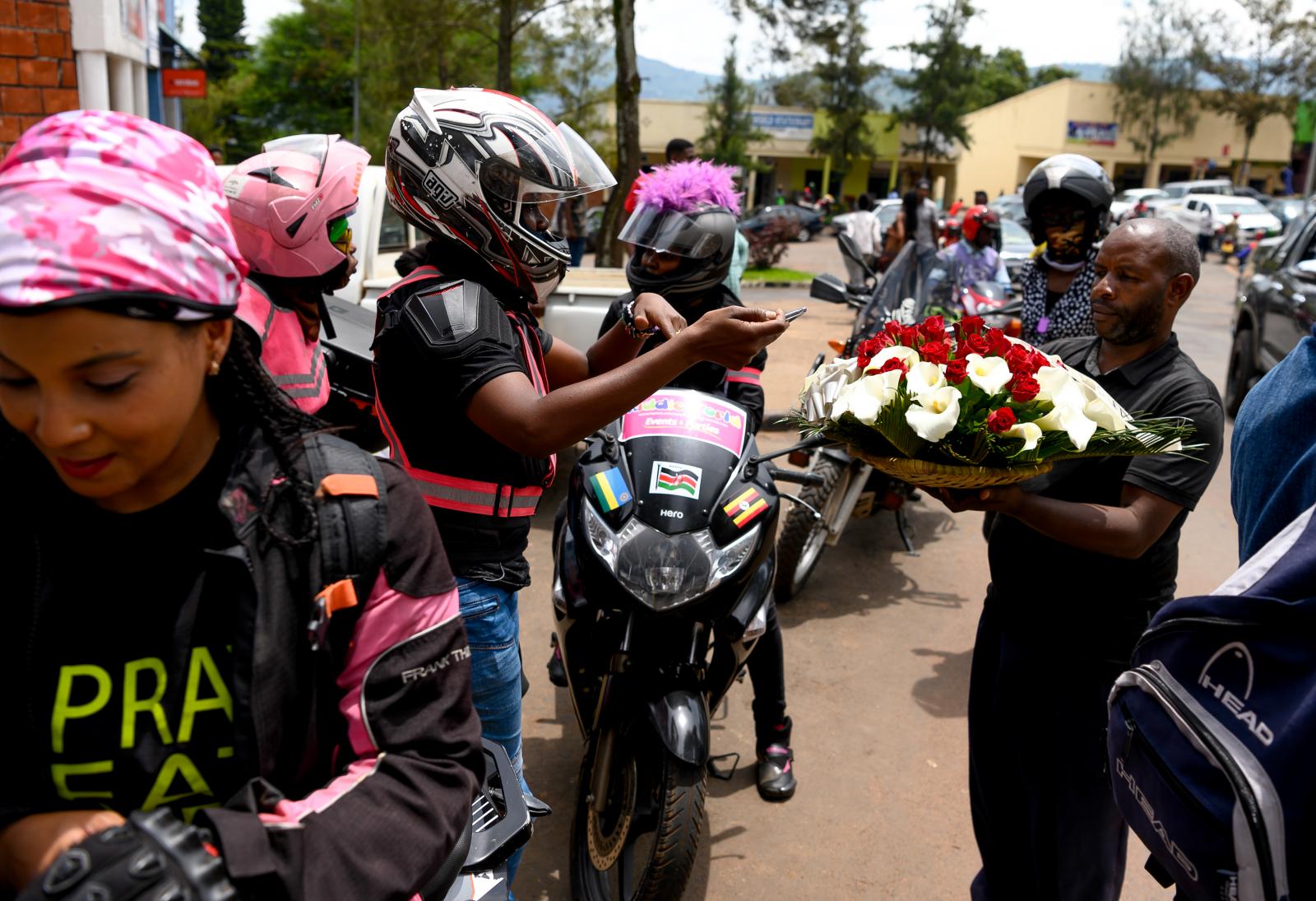 12 of 12 © 2022 Maggie Andresen
The Throttle Queens purchase flowers in the Nyamirambo neighborhood before visiting the Gisozi Kigali Genocide Memorial.
Close

Public Story
The Throttle Queens
Copyright Maggie Andresen 2022
Date of Work Apr 2019 - Apr 2019
Updated Nov 2019
Topics motorcycle
Originally published by The Lily:
When they rolled into Rwanda, the Throttle Queens drew stares. These female motorcyclists are on a mission.
Founded in 2017, this African biker club is set on empowering women and encouraging them to ride


The roar of a motorcycle engine in Kigali, Rwanda’s hilly capital city, is as ubiquitous a sound as birds singing at dawn, the chatter of schoolchildren walking to class and the drumming of rain as it bounces between roofs during the wet season. Motorcycle taxis, called motos in Rwanda and boda bodas in neighboring East African nations, are a quick and affordable mode of transportation across the region. Most of Kigali is accessible by moto for about fifty cents to a dollar per ride, making it a common form of transportation, and abamotari — motorcycle drivers — fill the streets at all hours.
Last month, a group of six motorcyclists entered Kigali after riding more than 1,100 kilometers (about 683 miles) over three days. But they were an anomaly in a city full of motorists — the group was comprised solely of women.
The Throttle Queens, one of 18 registered motorcycle clubs active in Nairobi, Kenya, had just completed their drive from Nairobi to Kampala, which is in Uganda, to Kigali. In the coming days, they would also cross the border to Burundi before making the journey back to Nairobi, covering a total distance of 2,601 kilometers (about 1,616 miles) over nine days, four of which would be spent exploring Rwanda.
The Throttle Queens bike club was established in 2017 and currently has eight members. They aim to make Nairobi’s motorcycling community more inclusive by inspiring women to engage in riding. The club’s members include a nutritionist, the CEO of a children’s entertainment company and the co-founder of an artistic collaborative. The Throttle Queens embrace riding as an extension of their freedom and pair it with their everyday lives.
“As a woman, when I first started riding, I felt like I should conceal it from friends, co-workers and acquaintances to avoid disapproval,” says Aisha Mohamed, a human resource manager and mother of three who is in her fourth year of motorcycle riding. “But I have since decided that hiding my essential nature from my friends and family is foolish.”
Founding member Victoria Musyoki describes the origins of the club as an opportunity to educate and advocate for women motorists. Musyoki and Ciku Mbithi, a co-founder, “saw the need to have a club that would redefine what being a lady biker was all about,” Musyoki said. “A club that would demystify the stereotypes of lady bikers and one that would inspire young women to do what it takes to be the best versions of themselves.”
The Throttle Queens ride in bright colors, sporting helmets decked with feathers, horns and rainbow hair. Biking through Kigali, they drew stares from Rwandans unaccustomed to seeing women driving motorcycles. Six of the group’s eight members participated in the ride from Nairobi to Kigali and back: Mohamed; Musyoki; Mbithi; Rhoda Omenya, 33; Shiku Njenga, 29; and Njeri Mwangi, 38.
The Throttle Queens’ visit to Rwanda prompted local media attention and a meeting with the Rwanda Development Board’s Chief Tourism Officer Belise Kariza, who praised the group for their encouraging messages to young women. “It is amazing to see a group of women complete this journey in such a short time, women can do anything,” Kariza said in an official statement. “Their trip gives the representation of women on motorcycles we are missing. It is very exciting and inspiring.”
The mission of the Throttle Queens’ ride from Nairobi to Kigali and back was to promote motorcycle safety, a key concern in a region where road accidents are common. According to the World Health Organization, between 3,000 and 13,000 Kenyans die in traffic crashes annually. The Throttle Queens underscored this by fanning a banner behind them that read, “Share the road, every life counts.”
“In 2016 we lost a biker friend and have since lost many others to road accidents,” Mohamed said. “Road safety is important to us because in Kenya, we have roads that are not well planned for road users.”
“We want everyone to be conscious for their own good and for the good of all others driving, riding, walking the same road,” added Mwangi.
After nine days on the road through four countries, the Throttle Queens arrived back in Nairobi to a warm welcome from their fellow cyclists. It was the longest cross-border trip they had taken as a group since the club’s founding, preceded by a one-day ride from Nairobi to Moshi, Tanzania, and back in 2018. The group is tentatively planning a longer ride to South Africa next year. Until then, they’ll continue navigating the roads of Nairobi with the goal to inspire more women to join them.
“You just need to overcome your fears and start riding,” said Njenga. “Let’s just ride.”

The Guardian: Nigerians could see justice over Shell oil spills after six decades

Cautionary Measures Against Coronavirus in Rwanda

Women in Rwanda's largest refugee camp are beating back malaria