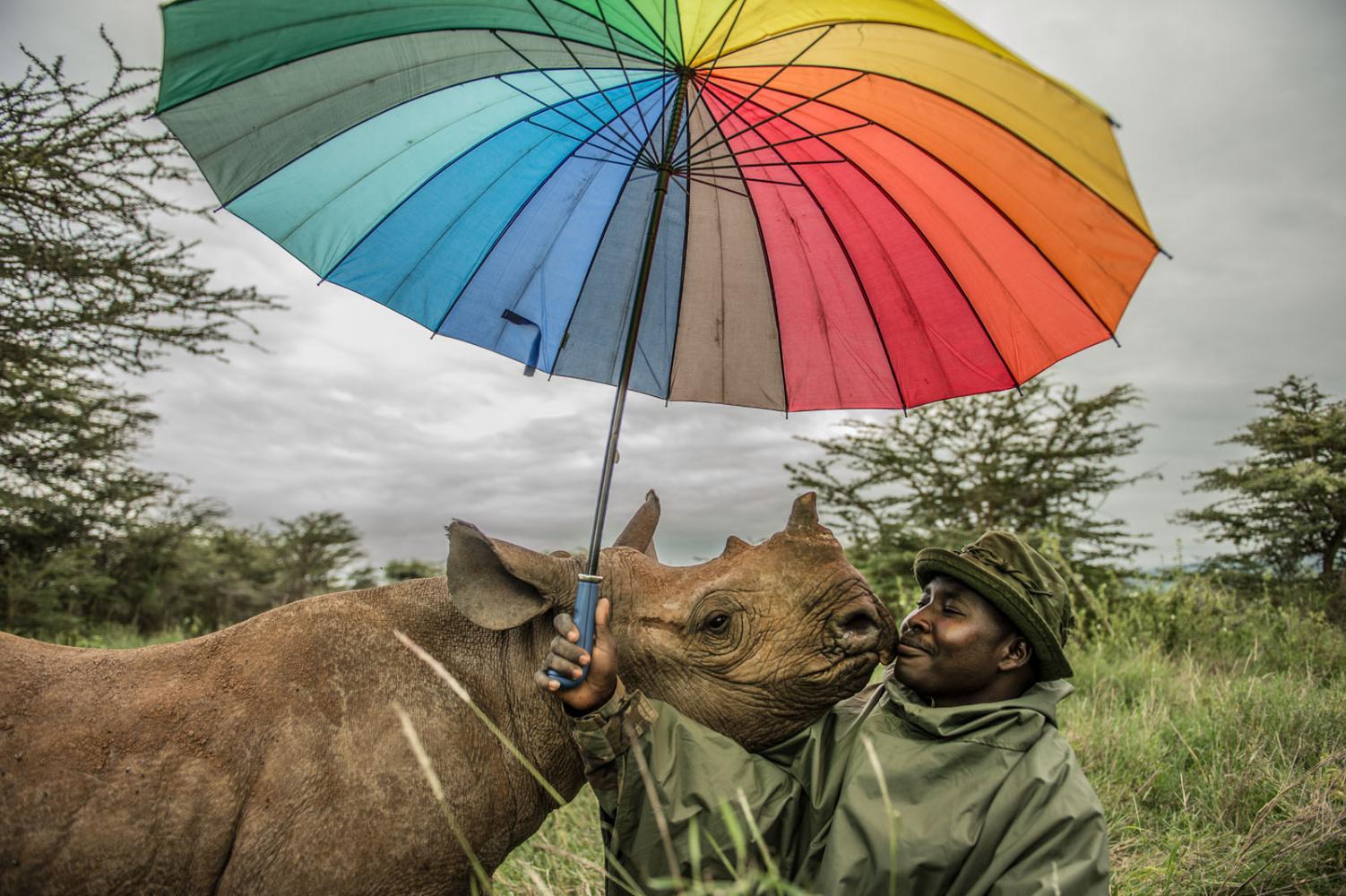 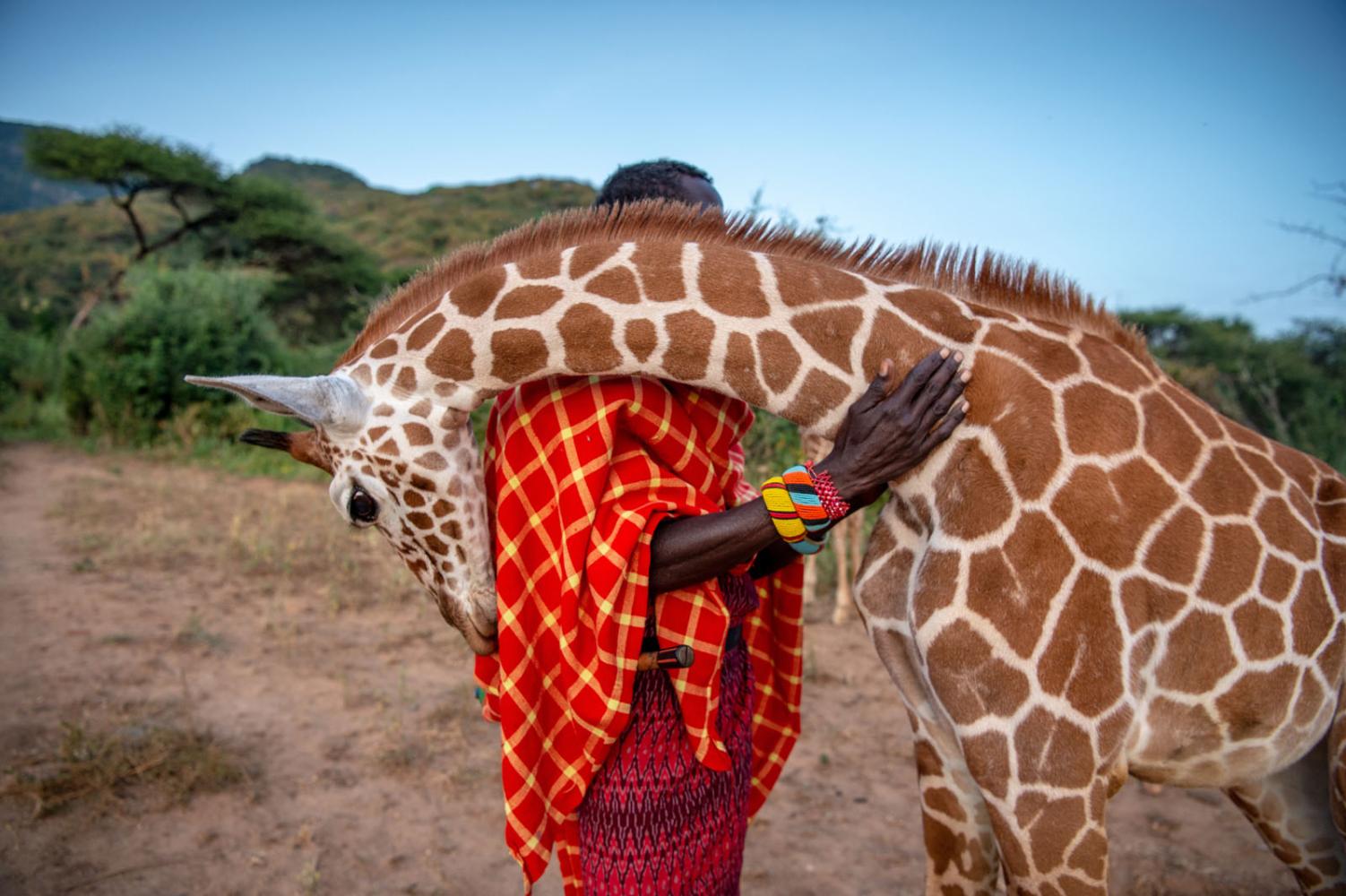 2 of 7 © 2023 Ami Vitale
An orphaned reticulated giraffe nuzzles Sarara Camp wildlife keeper Lekupania. This giraffe was rehabilitated and returned to the wild, as a number of others have done before him. Right now, giraffe are undergoing what has been referred to as a silent extinction. Current estimates are that giraffe populations across Africa have dropped 40 percent in three decades, plummeting from approximately 155,000 in the late 1980s to under 100,000 today. The decline is thought to be caused to habitat loss and fragmentation and poaching, but because there havenít been long term conservation efforts in the past, itís hard to know exactly what is happening. Reticulated giraffe themselves number fewer than 16,000 individuals. Scientists are now undertaking major studies to better understand why giraffe are disappearing and what can be done to stop it. BIO: Nikon Ambassador and National Geographic Magazine photographer Ami Vitale has traveled to more than 100 countries, bearing witness not only to violence and conflict, but also to surreal beauty and the enduring power of the human spirit. Throughout the years, Ami has lived in mud huts and war zones, contracted malaria, and donned a panda suitó keeping true to her belief in the importance of ìliving the story.î In 2009, after shooting a powerful story on the transport and release of one the worldís last northern white rhinos, Ami shifted her focus to todayís most compelling wildlife and environmental stories. She is a five-time recipient of World Press Photos, including 1st Prize for her 2018 National Geographic magazine story about a community in Kenya protecting elephants. She published a best-selling book, Panda Love, on the secret lives of pandas. WEBSITE: amivitale.com INSTAGRAM: @amivitale 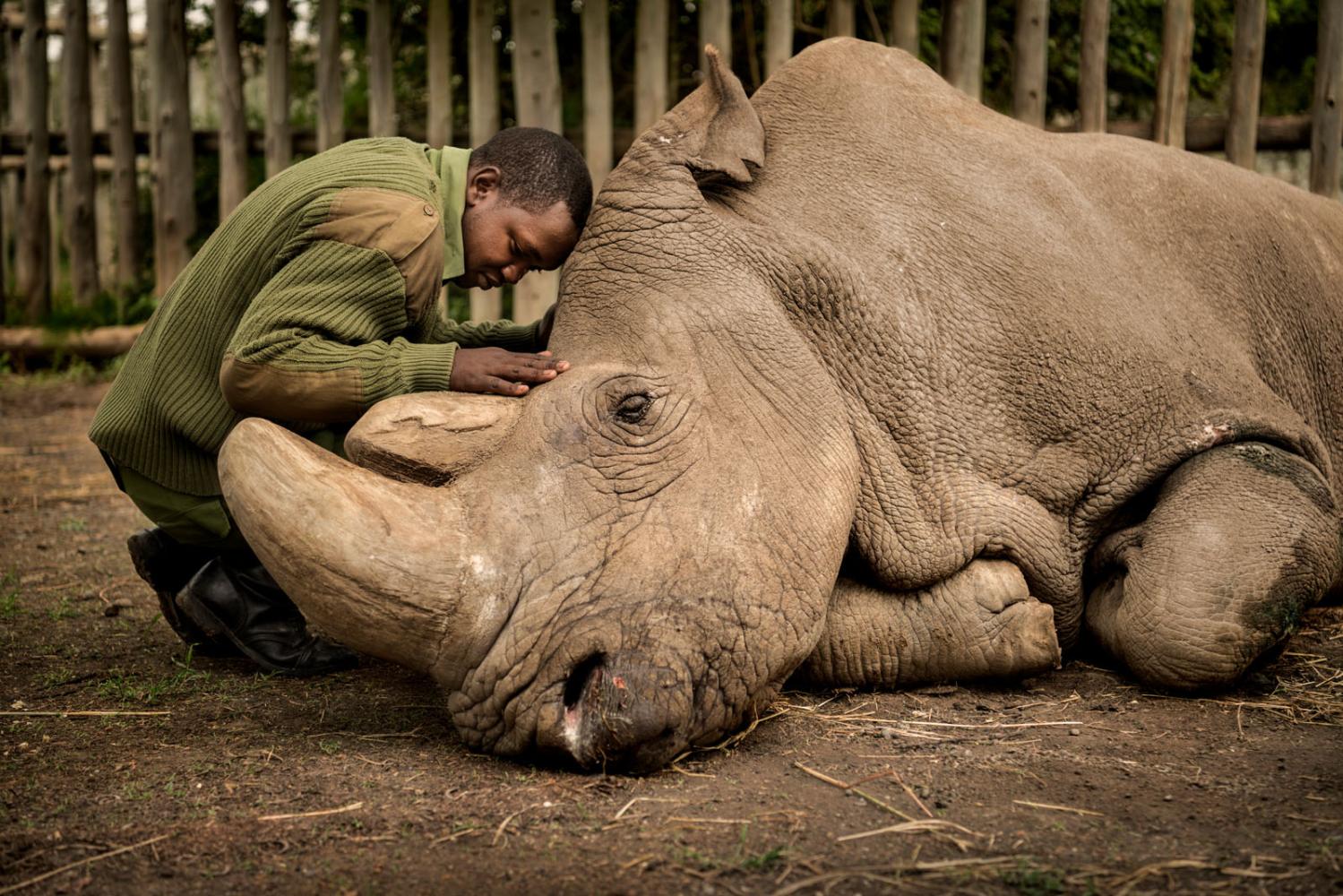 3 of 7 © 2023 Ami Vitale
Edition: 5 of 50. Joseph Wachira comforts Sudan, the last living northern white rhino on the planet, moments before his death on March 19, 2018 at Ol Pejeta Conservancy in northern Kenya. He died surrounded by love, together with the people who committed their lives to protecting him. From the moment I heard about the bold plan to airlift four of the last Northern White Rhinos from Safari Park Dvör Karlove Zoo in the Czech Republic back to Africa in 2009, until today, when Najin and Fatu, his daughter and granddaughter, are the last two remaining of their kind, this story has shaped the lives of countless dedicated keepers, scientists & conservationists. I believe this moment can be a catalyst to awaken humanity to the reality of the losses we face and inspire action. In a hopeful twist, scientists from The Biorescue Project have already created 12 pure northern white rhino embryos which are awaiting implantation in a southern white rhino surrogate. National Geographic Magazine photographer and filmmaker Ami Vitale has traveled to more than 100 countries, bearing witness not only to violence and conflict, but also to surreal beauty and the enduring power of the human spirit. 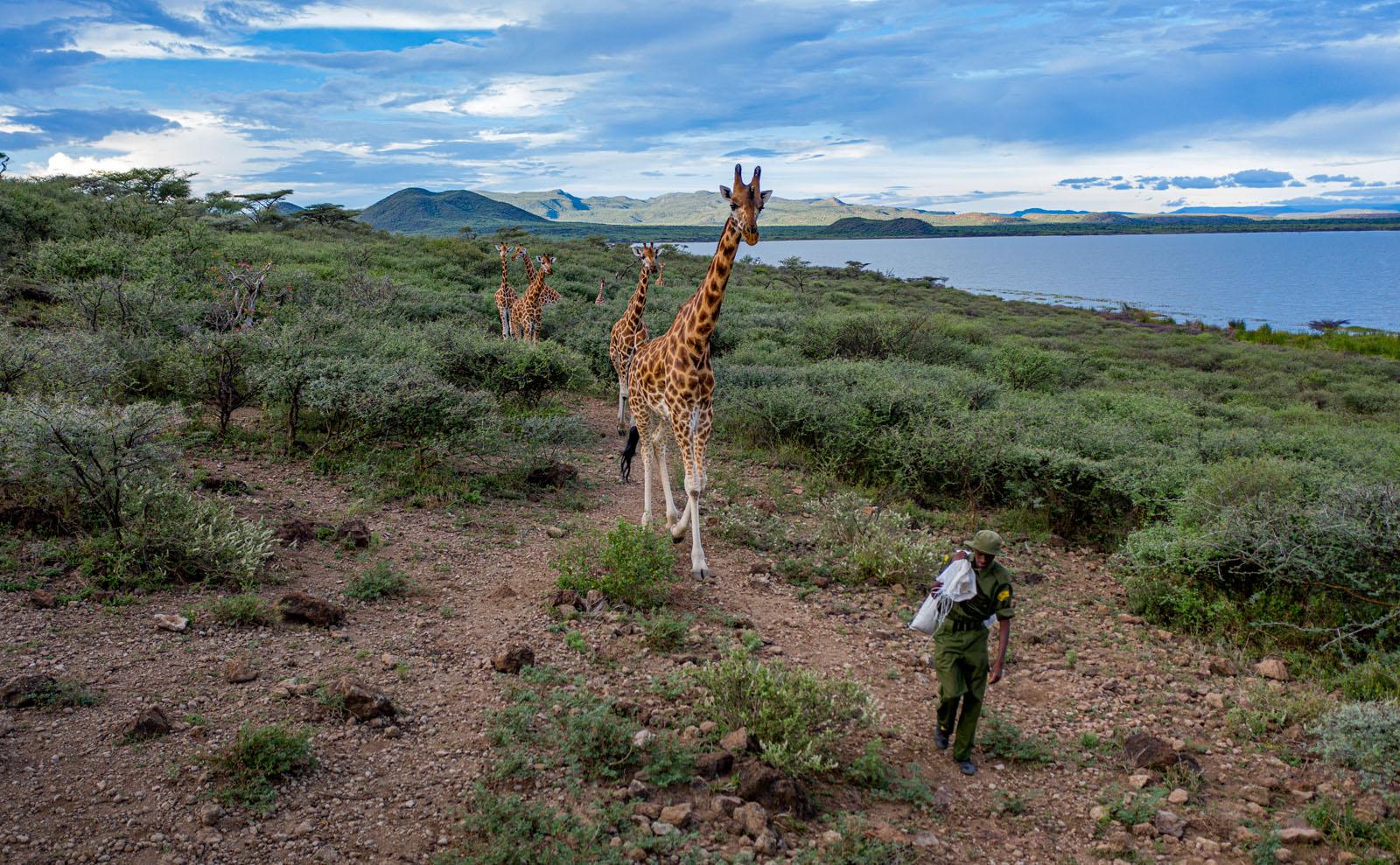 4 of 7 © 2023 Ami Vitale
Mike Parkei, a ranger for Ruko Conservancy looks after 8 Rothschild's (Nubian) giraffes who have become stranded on Longicharo Island, a rocky lava pinnacle, inside Lake Baringo in western Kenya, November 28, 2020. Rising lake levels have cut the peninsula into an island, trapping the giraffes, and the local community is working with conservation organizations to keep them alive. The plan is to move the giraffe on a barge for 1.1. miles to the 4,400-acre fences sanctuary within the 44,000 acre Ruko Conservancy. The herd includes one make names Lbarnnoti and seven females: five adults named Nkarikoni, Nalangu, Awala, Asiwa and Nasieku; and two juveniles, Susan and Pasaka. Asiwa is isolated on a far part of the island. Today, fewer than 3,000 Rothschild's giraffes are left in Africa, with about 800 in Kenya. (Photo by Ami Vitale) Lake Baringo Kenya 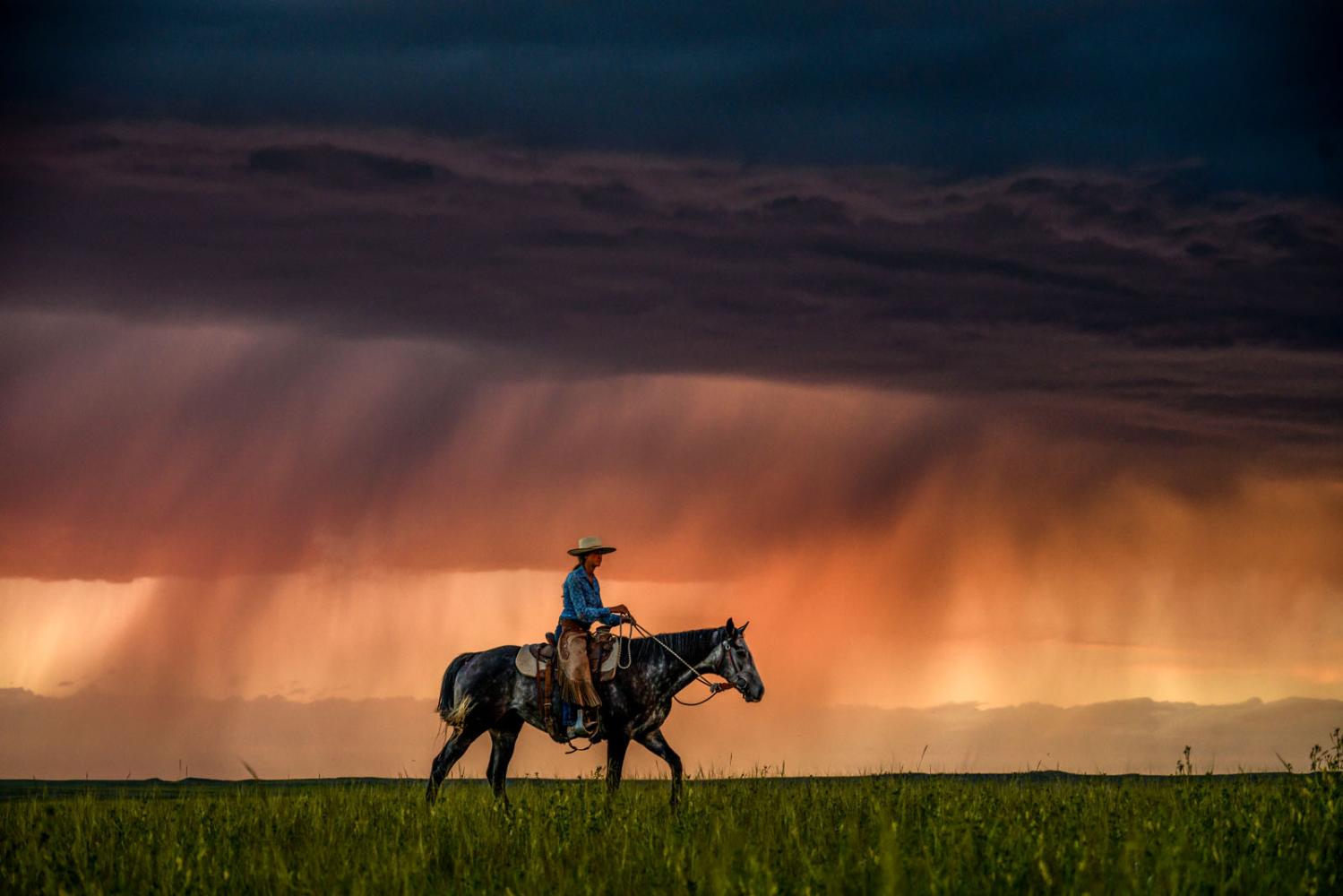 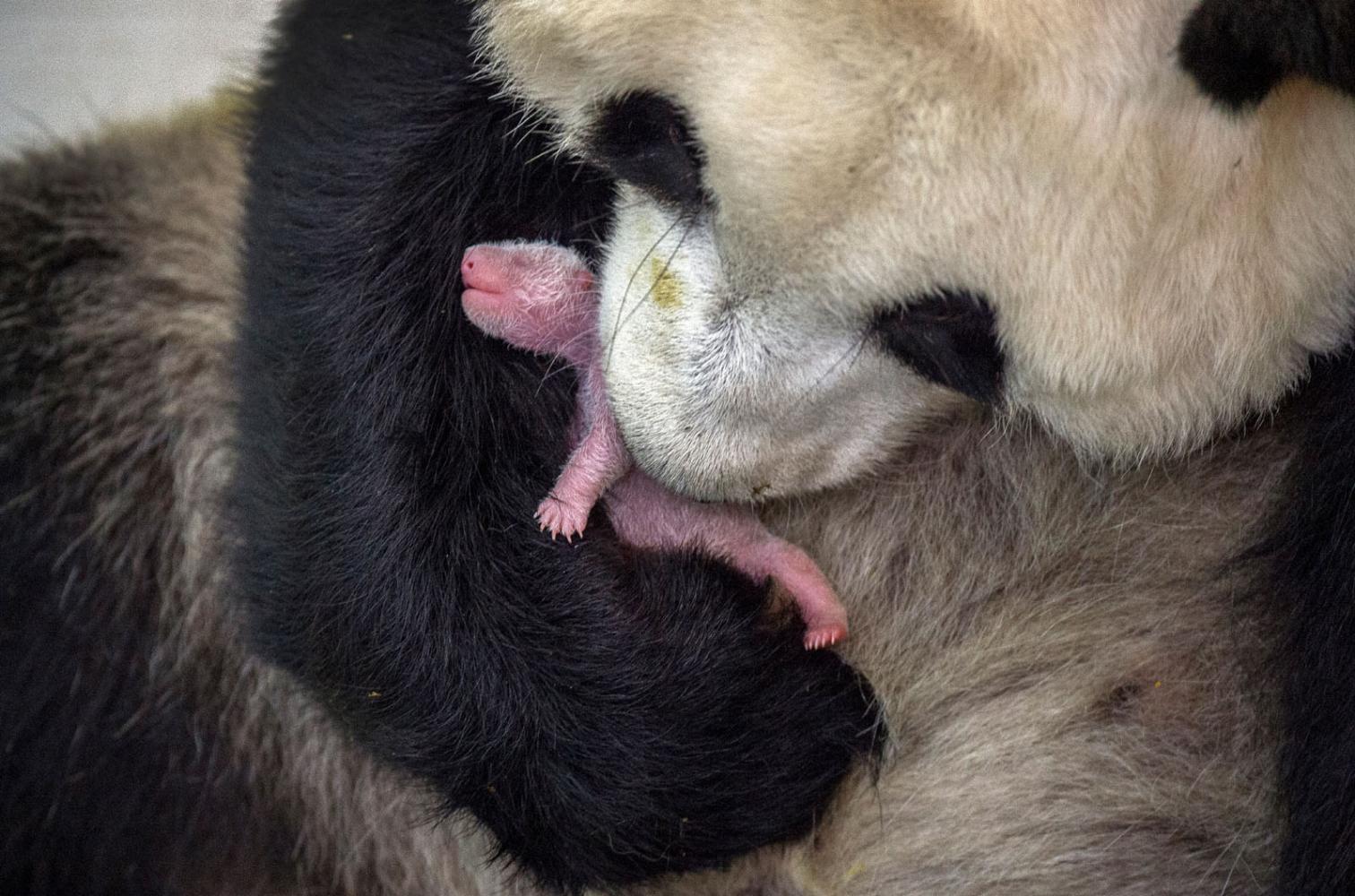 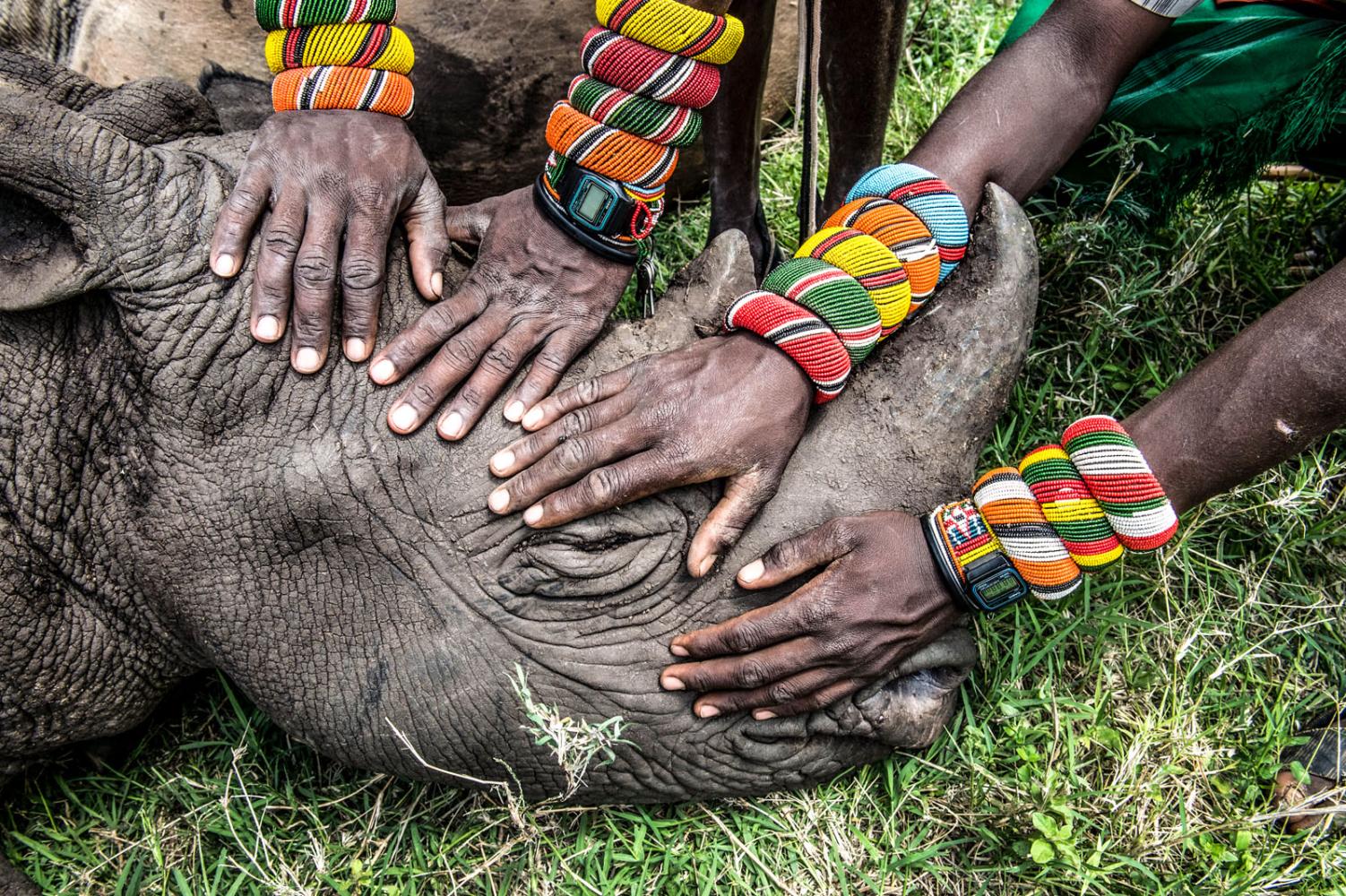 The purpose of our grants is to support and encourage visual storytellers to create a long-term documentary photography project with local communities who are working to protect the environment and wildlife.

In addition to funding the Grant, Vital Impacts will be offering a mentorship program to the top 50 applicants for the Vital Impacts Environmental Grant. Participants will take part in a series of 12 classes with leading environmental and photographic figures.

Entrance Fee: $25. Fee may be waived for economic hardship. The fee is waived for all applicants from developing countries. Please reach out to hello@vitalimpacts.org for fee waiver codes. FLASH PRINT SALE to benefit @GirlsWhoClick in celebration of Day of the Girl on October 11th!